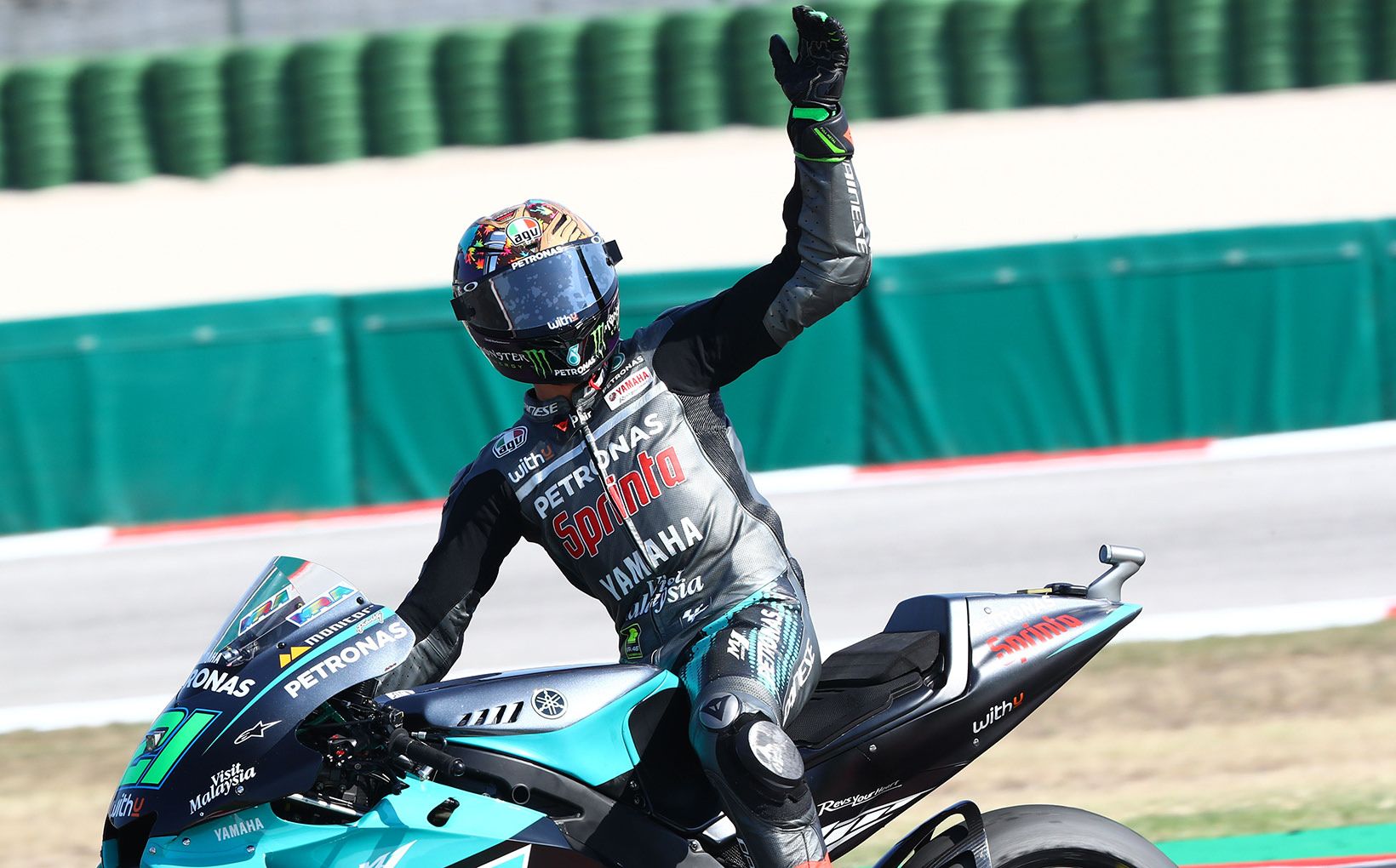 The first Misano Grand Prix of 2020 was exceptional with Franco Morbidelli winning his first ever Grand Prix, Pecco Bagnia achieving his first podium and Joan Mir also stepping on to the podium for the second time with the Suzuki outfit. Valentino Rossi was just short of being up there to celebrate with his riders and a 200th podium finish with a defensive line that caused his front tyre to become unstable and a wide line taken which let Mir swoop on through with a smile to finish in third. Rossi will have to wait just that bit longer to achieve the 200th podium result. 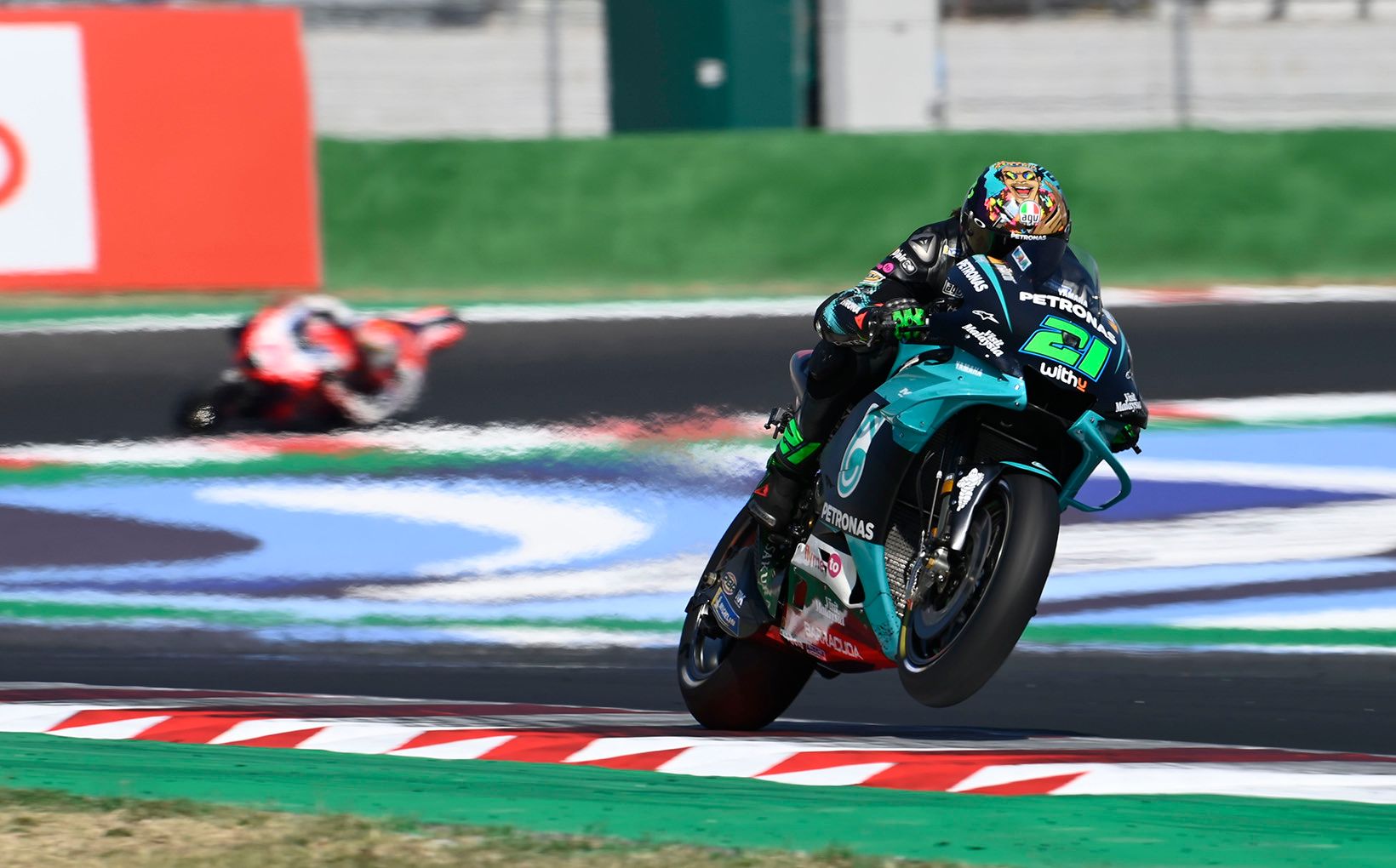 We must say that Morbidelli was perfect all race with total focus, no mistakes and a hunger to win that burnt bright in the way he rode his Yamaha machine. On the other hand, his teammate Fabio Quartararo crumbled. The Frenchman made some serious mistakes which put a dent in his World Championship after crashing out of the front pack and after remounting, going in to the pitlane, crashing again which rendered him a DNF. As some have been saying, it is Quartararo’s title to lose which is becoming a reality race after race at the present moment. The French rider needs to pull his socks up! We do not know how each race will play out and Morbidelli utilised his training, focus and Rossi inspired manoeuvrers to get the job done. It will be a big wake up call for other riders who thought they were going to finish at the top and rather ended up further down the pack than they anticipated. 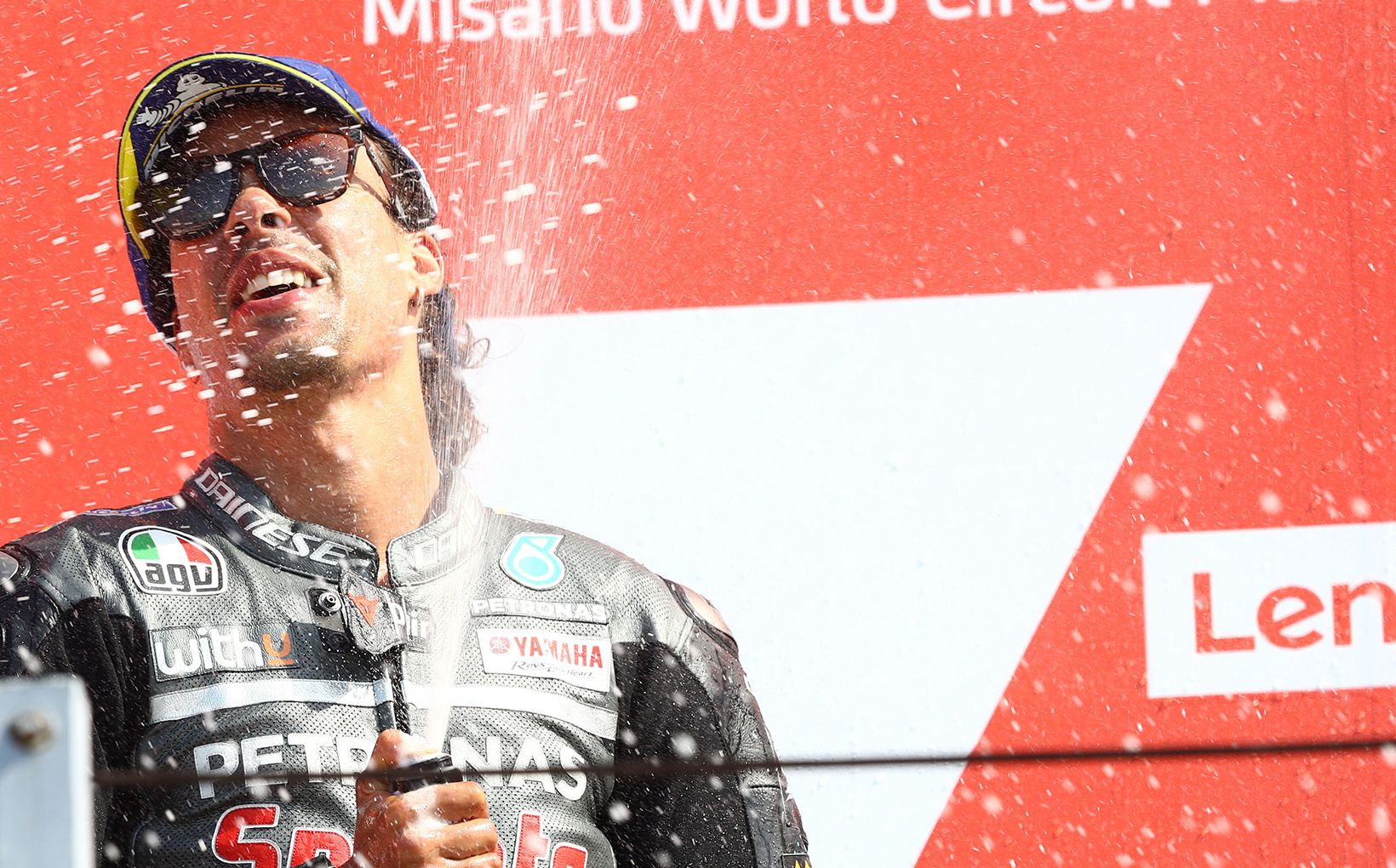 Franco Morbidelli:“I feel like this has been a magical week for me. Everything had been going well, so going into today I was thinking that maybe something good would be possible. Turns out, it was something great! I have never won a World Championship race at home before, so to do it in MotoGP is the greatest achievement in my life. I’m really proud to be able to say that. I want to say thanks to all the people that work with me, it isn’t just me. This win is a result of teamwork. Right now I’m just so proud of what we have achieved, not just today but in general. Seven years ago I was racing here with a stock 600, now I’m winning a MotoGP race. It’s just amazing, especially as it’s the first race with a crowd this year. It felt great to be able to salute the crowd after the race. We do this for them, so to celebrate with them was such a great feeling.”

With Misano back on the cards this coming week, teammate Quartararo will be studying where things went wrong and to ensure he brings the performance level back up to 110% with zero mistakes because a season like this one can see you go from top to middle to last and vice versa. With Marc Marquez on the sidelines, the Championship is so very close and up for grabs. So who wants to take the bull by the horns and win?

Fabio Quartararo:“First of all I want to congratulate Franco, because he really deserved the win today. It was a really tough race for me but it is what it is, I will learn from it. I made a mistake: I was trying too hard to overtake Maverick [Viñales] and it overheated the tyre. I made the move, and was the correct move to make, but Jack [Miller] was in front and I wanted to catch him as well but too quickly. I braked too late and lost the front end. We are struggling to overtake with our bike, which is something we need to work on. Of course I am disappointed, as we had the speed to fight at the front, but we learn from the experience and I won’t make the same mistake next weekend. We have seen five different winners in six races and it is one of the closest championships we’ve had, so I’m going to continue to give my best and try to make it ours.” 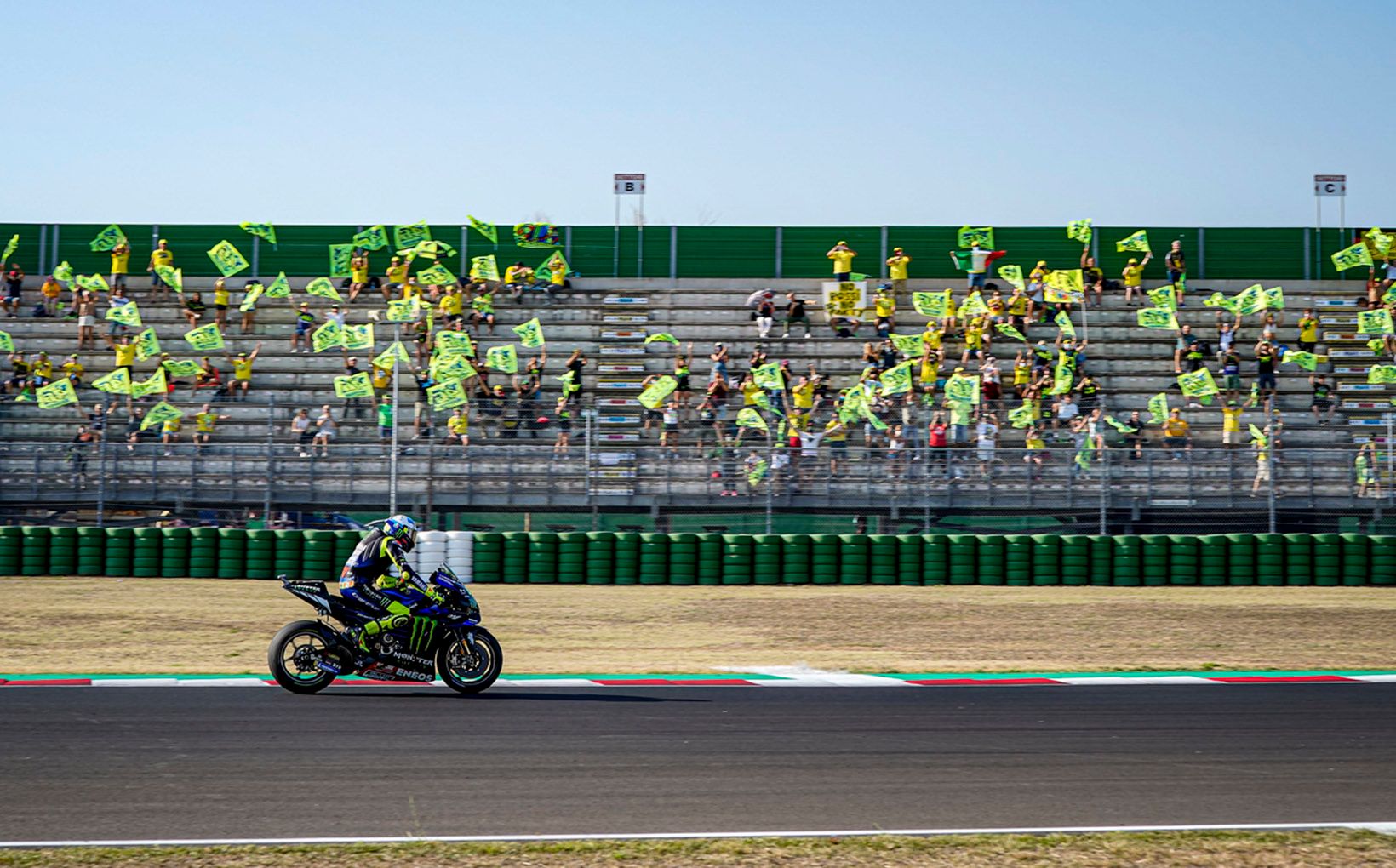 The Misano circuit re-surfacing definitely suited the Yamaha and Suzuki machines in comparison to Honda and Ducati from an overall manufacturer perspective. It was also the first time fans have been allowed to the circuit to watch from the grandstands even with Rossi’s girlfriend making her presence known in and amongst the fans to cheer on her superstar boyfriend. Considering the race pace, Rossi did everything he could to stay with his mentored rider from the VR46 Academy Morbidelli though was outclassed by his level of stability on the sister Yamaha. With that said, Rossi could not be prouder of his riders with Bagnaia riding after 5 weeks off with a broken leg. It was a superhuman effort to ride in the heat with such a dominant performance. Fellow Pramac rider, Jack Miller, suffered quite a lot and struggled to keep up though achieved some essential title points to keep up the title charge. The Italian rider Bagnaia definitely felt the pain with about four laps to go though dug deep to physically and mentally push through the pain barriers because the taste of Prosecco and holding up a trophy was far more important than taking his hand off the gas and going backwards in the points and losing out once again. 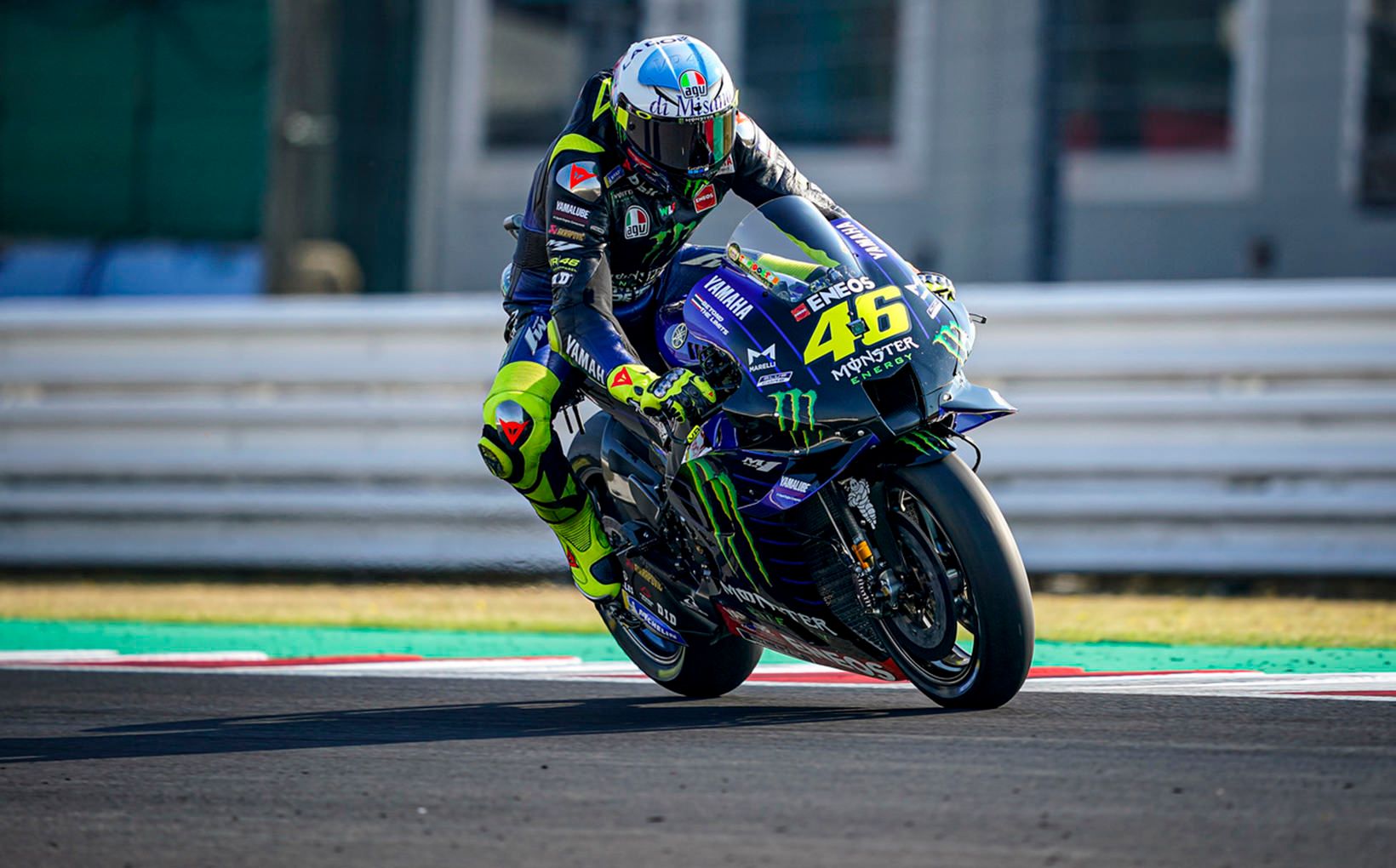 Valentino Rossi: “It’s a great shame because the podium is always special, here in Misano even more so. Also, to share the podium with Franco and Pecco would have been like a race at the ranch. I made a small mistake and Mir was very strong in that moment, he did very good lap times in the last part of the race. At the end he was able to beat me, which is a shame with just 2km to go. On the other hand, it was still a good race, a good weekend, because I rode well. We had a very good pace and I feel good with the bike. So, even without a podium, I enjoyed it. It was a good weekend for our team and for me, because we were always competitive. This is so important. I think that we can improve three or four things for next week, when we’ll have another chance. This makes me even more happy, because we can try again.”

Maverick Vinales:“I don't know what happened today. I'm really disappointed. I don't know why I lost grip in the race. I tried everything I could, but I wasn't getting enough feedback from the tyre. At the end of the race I did three or four really good laps, but that was too late. We will work on it. We have a test here on Tuesday. We will try to stay relaxed. We need to reset our minds for next weekend. We know we are fast here, so we can start in front again.” 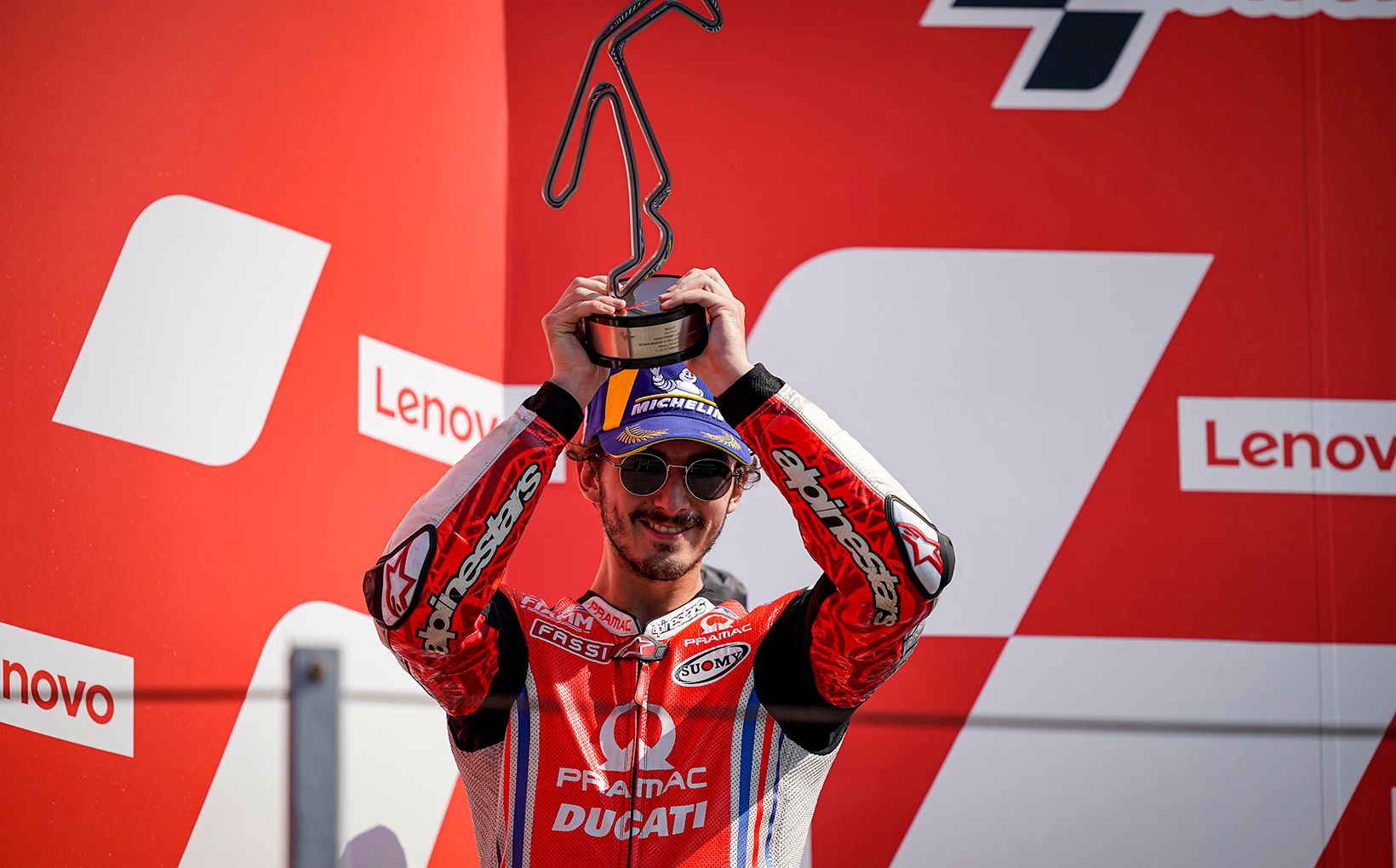 Pecco Bagnaia:“When I arrived to Misano my goal was only to finish the race. On Saturday during FP3 when I just thought about riding I understood that I could push and my feeling when I rode was the same that I had in Jerez. The start of the race wasn’t very good, I lost some positions so I had to recover the gap with Mir. When I passed him I saw that I could reach the head group. I hadn’t thought about my leg and I thought only about my first podium in MotoGP during my home race with the fans. During the last 4 laps I felt pain but today we deserved this podium. I want to thank my team, Ducati and VR46RidersAcademy for their big support. Today this podium is for them. I’m looking forward to be back on this track.” 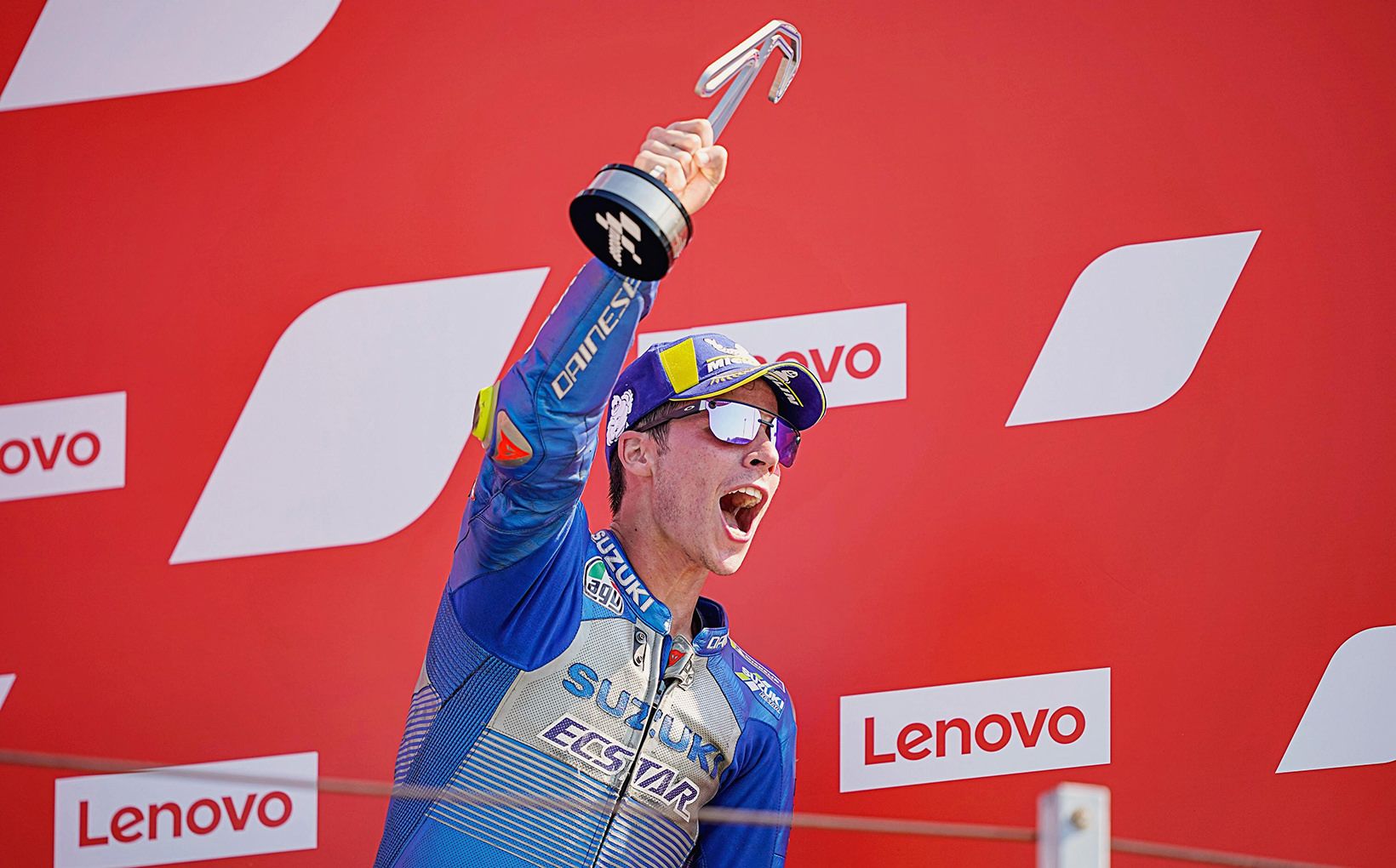 In analysis the grid, Joan Mir is a dark horse when it comes to race performance because when he starts, his laps can take a bit of time before they end up at the optimum level. With that said, when it matters the most, he pushes and ends up faster than any other rider can anticipate on the circuit. The final overtake was a superb effort and display of confidence for Mir as a young rider. He was confident and that makes a world of difference when a podium is on the line. The tyres were not in his favour for majority of the race which is interesting because on the used tyre he was faster. Without a dobut, Mir is a dynamic rider and the Suzuki corner speed and turning is helping to allow both him and Alex Rins to finish strong which is a true testament to their work at the Suzuki factory. The teamwork is showing progress. When you are feeling 100% it is easier to handle tough circuits. This circuit is demanding and a physical challenge for most, with Rins suffering in the last few laps, it allowed Mir to push through and come out on top which was devastating for Rossi and the fans hoping to see him celebrate in style. We will have to wait and see what the next race brings at the Misano circuit, no doubt it will be a race full of passion, spills, thrills and a rollercoaster ride of emotions. 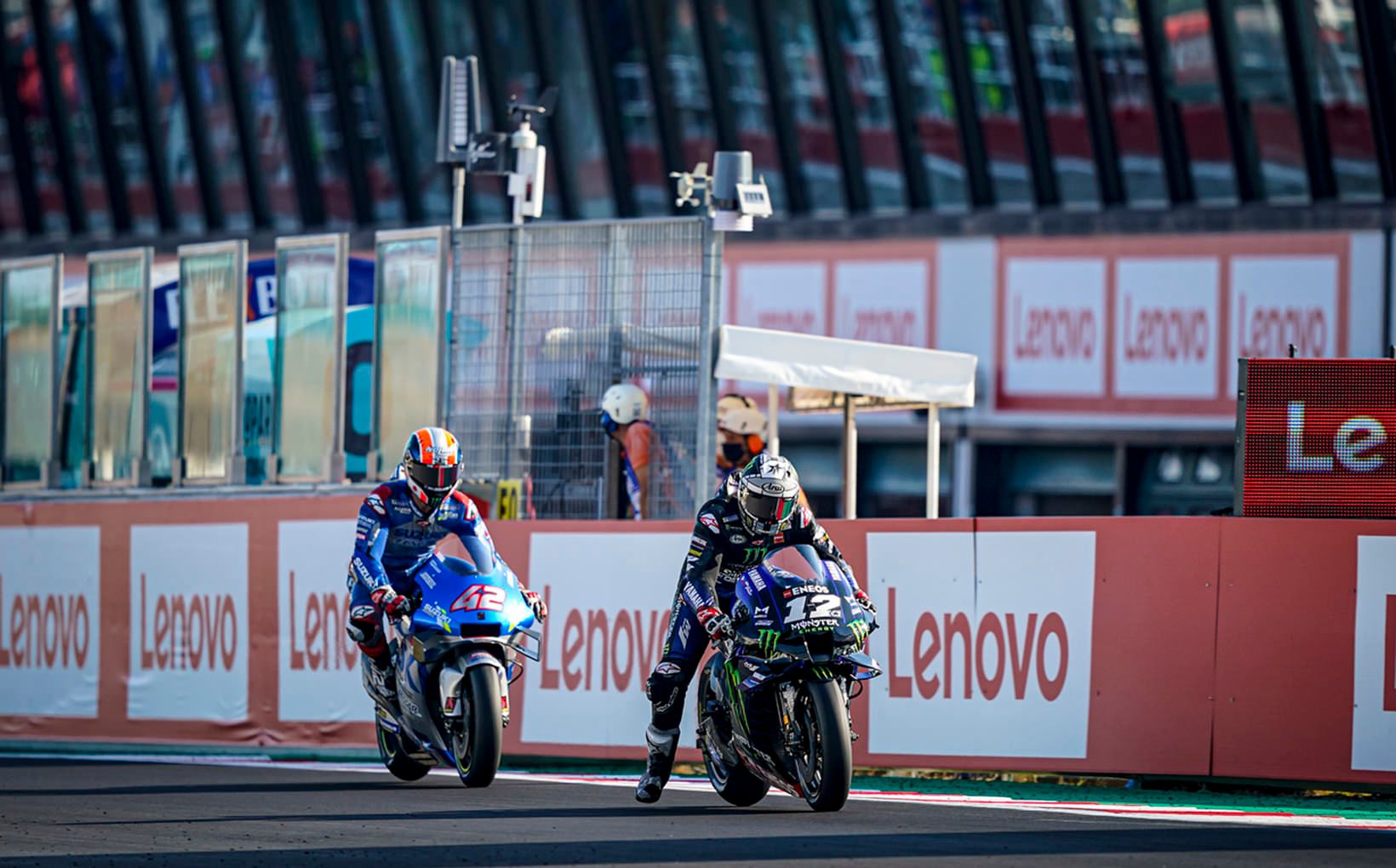 At the moment, Vinales needs a psychological coach to get rid of his demons as watching him collect pole position, destroy the lap record and then on race day drop like a fly was gut wrenching. ‘Top Gun’ Maverick needs a new dose of good vibes and energy to bring luck his way. With Cal Crutchlow out and trying to recover after fluid build-up has occurred on his forearm from arm pump surgey, the Honda manufacturer is suffering and at a great cost. Their two main riders are injured. No one would have predicted in 2020 that Honda would be towards the back of the grid on most race occasions. Takaaki Nakagami is doing a wonderful job though certain race circuits are proving to be challenging for the Japanese rider. It was not an ideal weekend either for the KTM factory who were far from being top race competitive, so this circuit is certainly showcasing which bikes prefer its layout, tarmac and how quickly you can go from top spot to middle and back of the pack. 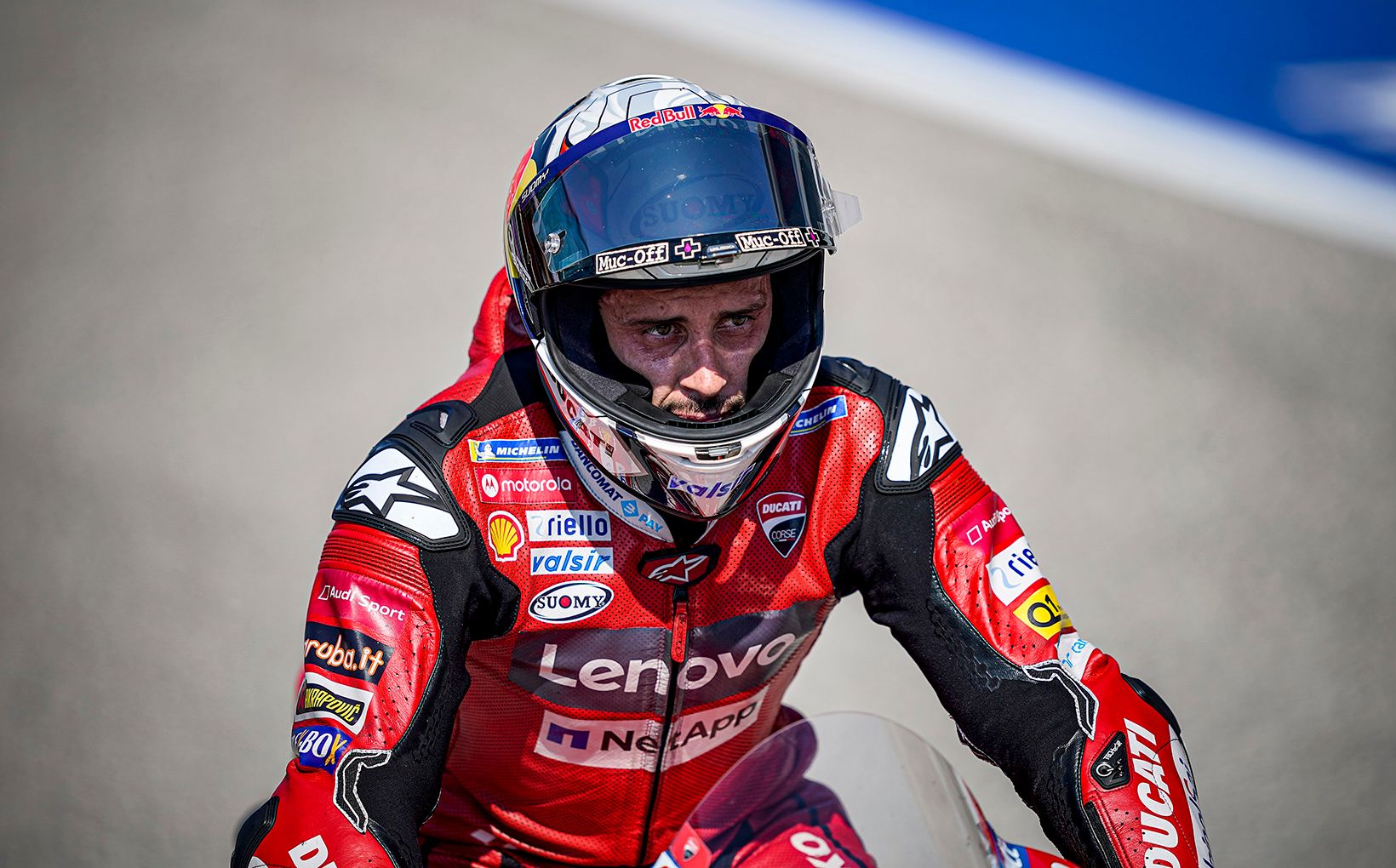 Overall, Andrea Dovizioso is now the title leader even though he finished in 7th place at the Misano Grand Prix. It is amazing what consistency can allow you to achieve in two-wheel motorsport. Some final closing words from Undaunted Dovi: "It was a tough race. Since I was starting from the back, I struggled a lot to find the rhythm at the beginning. I still can't be as competitive as I would like with these tyres and the riding style I've always adopted in the past years is not working right now. Fortunately, this Tuesday, we will have a day of testing here in Misano, which will be very important to try to solve this aspect. The championship this year is weird, and now we are leading the standings. We have to see the positive side of the current situation and continue to work, putting all our effort to come back stronger in the next races. I congratulate Pecco on his great performance today."

Ducati fans may just have a title coming their way if things continue steadily. In the meantime, there will be a test at the Misano circuit on Tuesday before the race weekend begins again on 18th September 2020.