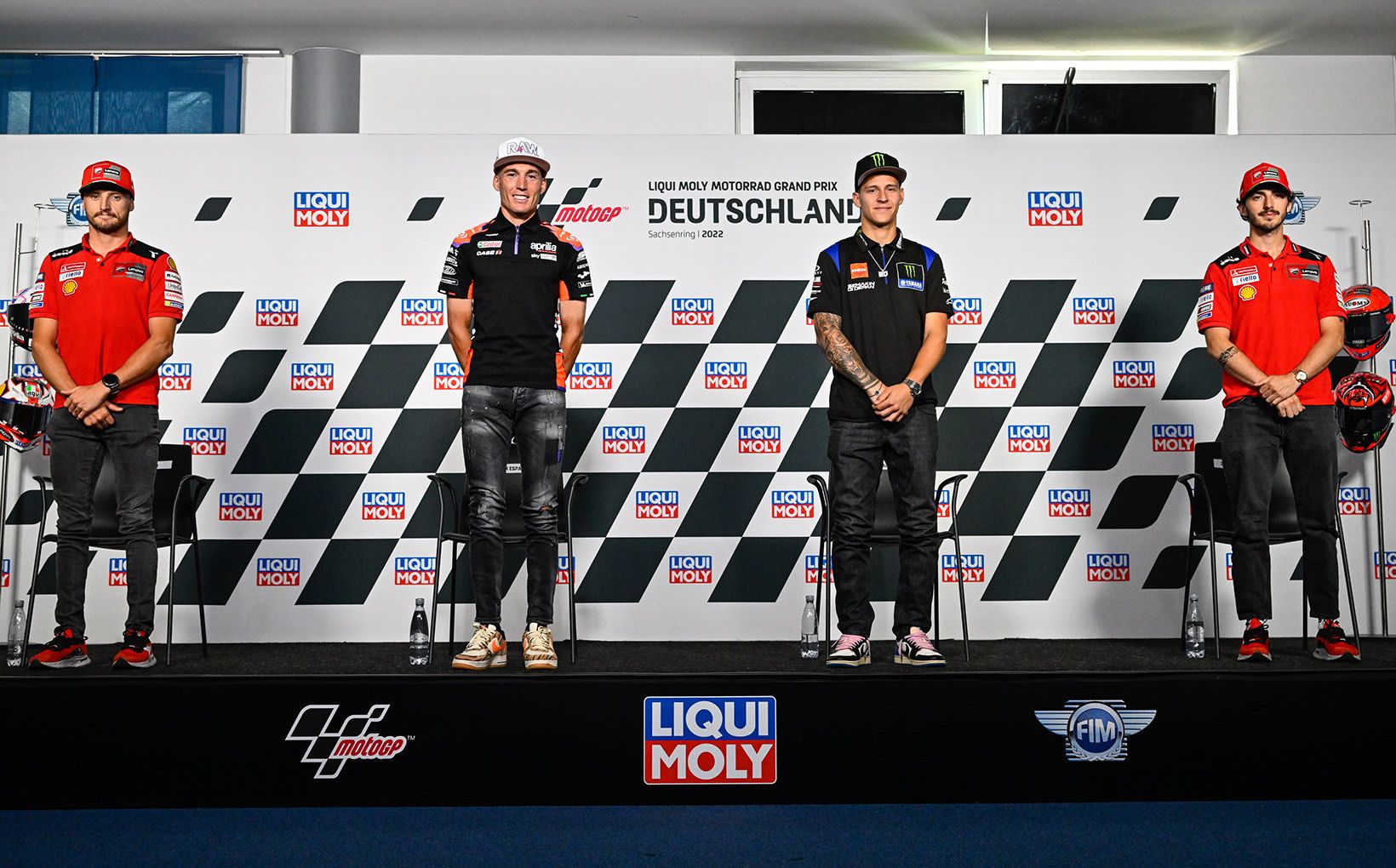 The Liqui Moly Motorrad Grand Prix Deutschland 2022 is underway with a circuit that is truly exhilarating. The predominantly left handed circuit does demand complete focus, concentration and physical strength at 100%. There has been rumour swirling about the future of Joan Mir, linked to Ducati along with various other manufacturers including Honda. There were talks about Mir going to Prima Pramac Racing or the factory Ducati team, however, it will be between Enea Bastianini and Jorge Martin. It is a shootout for the ride between the two young Italians and this will be determined after a handful of races and closer to August. As the silly season of contracts continues, so does the Championship battle!

As a MotoGP rider, you have to stay fit and healthy at all times. Any dip in physical performance opens the door for others to seize the opportunity and improve their title points and negotiate contracts. Out of everyone so far, Alex Rins has experienced some bad luck with his crash and fracturing his wrist when Takaaki Nakagami hit the back of Bagnaia’s bike with his head, sending Rins flying into space. Regardless of the surgery and how soon the turnaround has been since the operation, Rins tried to race this weekend as the track time with Suzuki is vital for the remainder of 2022 and leading into the 2023 season. What we do know is that each rider has a level of self-preservation and pain tolerance. This weekend, Rins tried to be fast and push beyond the barrier of pain and this time it has not worked due to the fact that he fractured his wrist only two weeks ago. There is only a small section of riders who can actually ride injured and be fast at the same time. We all remember Jorge Lorenzo with two fractured ankles, Kevin Schwantz practically riding with a cast on, Marc Marquez with his arm, Valentino Rossi with numerous injuries and a few others that are superhuman. As a result, Rins has withdrawn from the weekend and will assess his physicality for the Assen Grand Prix. It is a tough situation to be in because Rins is also looking to secure a contract for 2023 and right now is not fit to ride. This adds immense pressure to his career, no matter how upbeat he is as a person. It is a fact finding mission for the Spanish star because there are riders in Moto3 biting at the heels of the current paddock to get into the premier class.

This weekend, the sun is out in full force. It is hot, tyres will be tested and the margins for error small if you are to be at the front. Ducati are in fine form with both Jack Miller and Pecco Bagnaia going head to head with total confidence. We feel since Miller was announced as a KTM rider for 2023, he has been let off the leash and is more confident. Changes have been made which appear to have enabled Miller to find form once again. Whilst Miller and Bagnaia set lap records, Aprilia Racing is also hot on their heels to compete. Aleix Espargaro looks to be in fine form even after his mistake last race to which everyone keeps reminding him of the error. It will take great courage to not buy into the mental game whereby riders, journalists, team personnel and commentators constantly talk about the mishap. This is what we call a psychological barrier you have to jump over and over again no matter how tired you are. A Espargaro is a very mature rider and we look forward to seeing how he approaches this weekend’s race considering the spicy hot conditions unfolding this weekend. 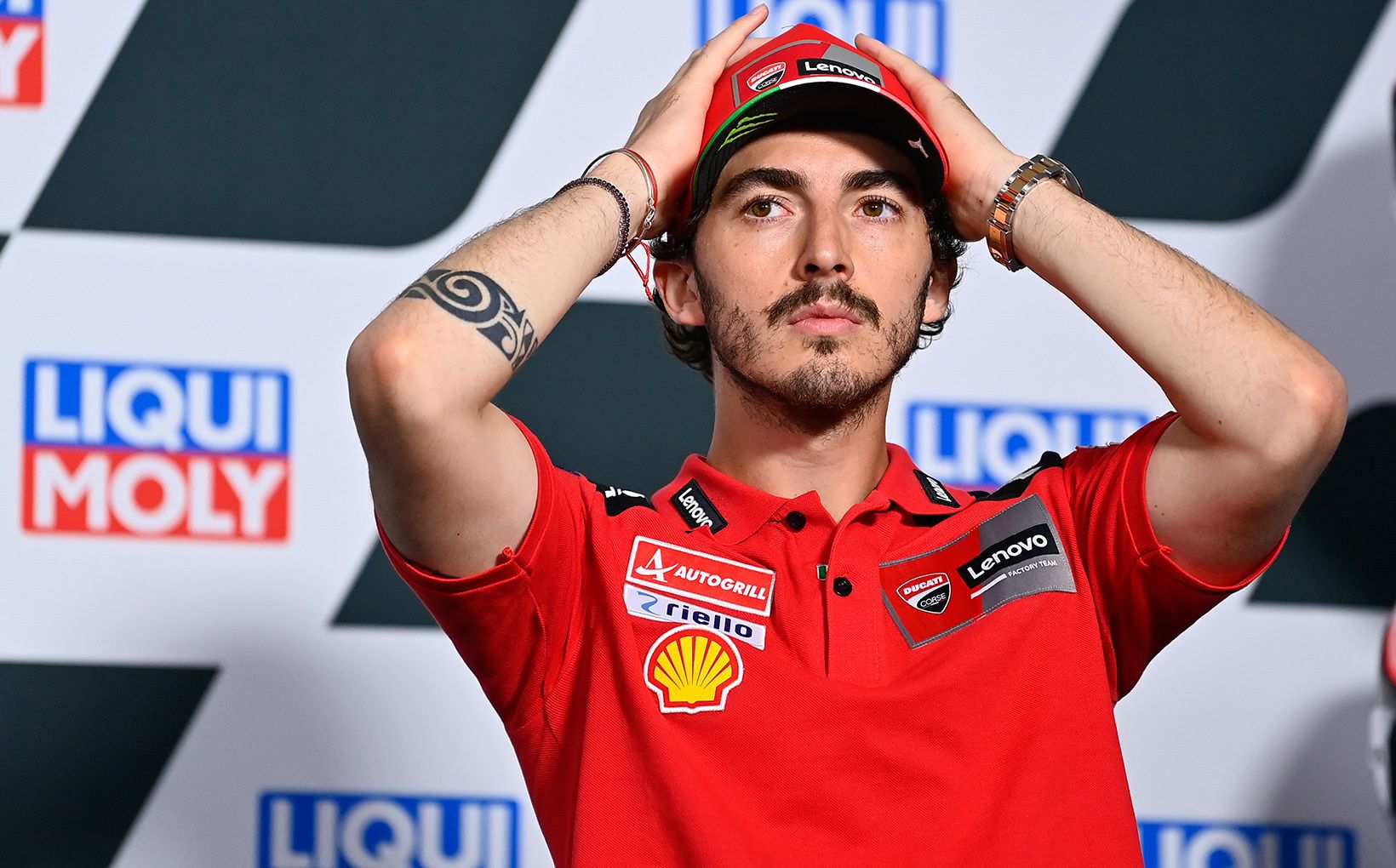 "The German and Dutch GP, which we will be held next week at Assen, will be two significant rounds. After the retirement in Barcelona, we now are 66 points behind Quartararo. It won't be easy to catch up, but I will try to close the gap a little bit before the summer break. Right now, Fabio and the Yamaha are very strong, but we will work hard to get the best possible result on Sunday". 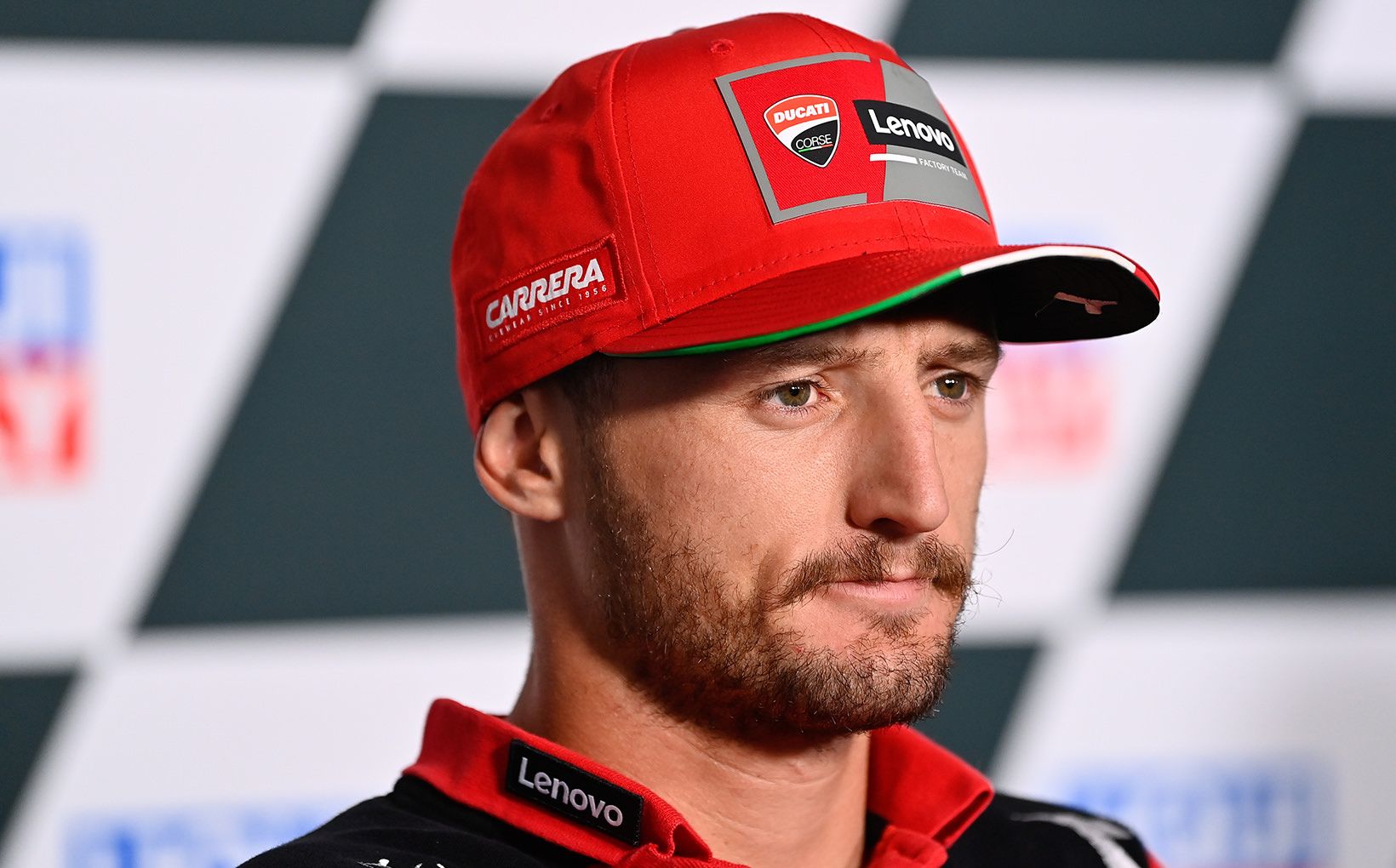 "I'm happy to be back racing this weekend in Germany. After the last Grand Prix at Montmeló, I'm eager to get back on my Desmosedici GP and try to redeem myself. Sachsenring is a rather twisty and peculiar track, and it definitely won't be an easy race, but, as always, I'll give my best to try and get the best result."

The German Grand Prix circuit is a short one and yet it is the longest one. It is a mental mind game and we are super excited to see how the event unfolds. This race as well as the next one is vital to the success of the World Championship not only for Quartararo, but it is also vital for A Espargaro and Pecco Bagnaia to catch up. Recovering points will be a mission for the Ducati rider, although anything can happen in MotoGP, race pace can shift, tyres can perform or drop off and crashing to injuries can arise with the click of a finger. The shoulder camera will debut this weekend with French rider Quartararo and at this circuit, it will be an absolute treat considering the speeds, traction and rider positions. We have noticed that Miller has adjusted his riding position and this is what Miller needed in order to go that next step. The relief of announcing his move to KTM has unlocked something within the Australian rider’s mentality and approach to the remainder of the season. Ducati need their riders to show up and no doubt, Miller will go out with more wins and podiums as his confidence levels skyrocket this weekend with the front end. It is time for “Thriller Miller” to bring home the goods. In comparison, Joan Mir looks like a different rider this weekend as he shifts his weight and the bike to the front rather than the rear. It has been a fact finding adventure which looks to have provided Mir with the confidence that he has been lacking all year. Mir may as well enjoy the journey because the following season is guaranteed to be challenging as he switches up manufacturers. In terms of where Mir will be in 2023, we are yet to find out. 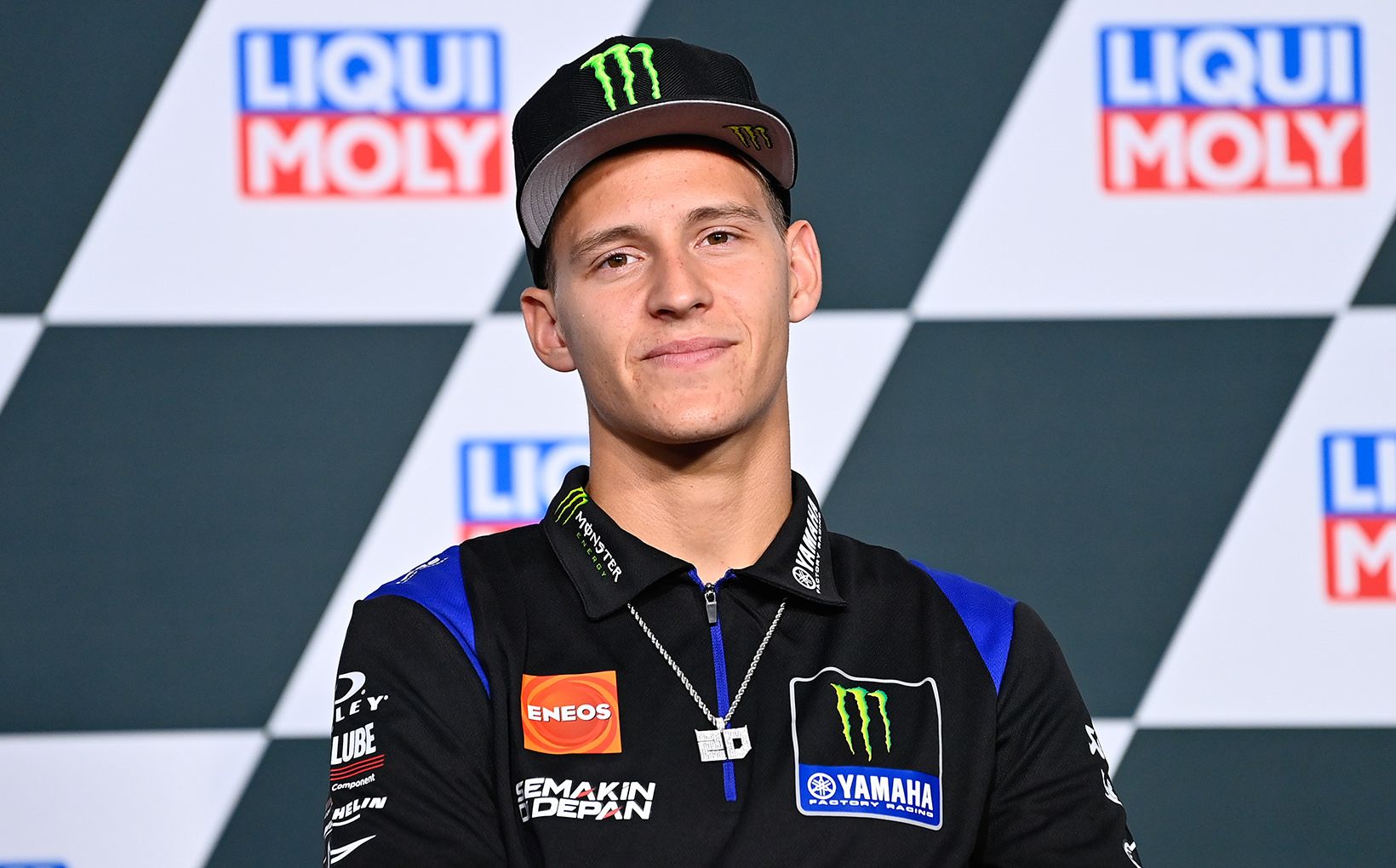 “The last race was great. This last week I’ve just been enjoying the feeling you get after a win, but now it’s time to focus again for the race at the Sachsenring. This is a completely different kind of track than Montmeló. But I’m feeling top fit, and I’m riding really well, so of course we will be going for the best result possible again!” 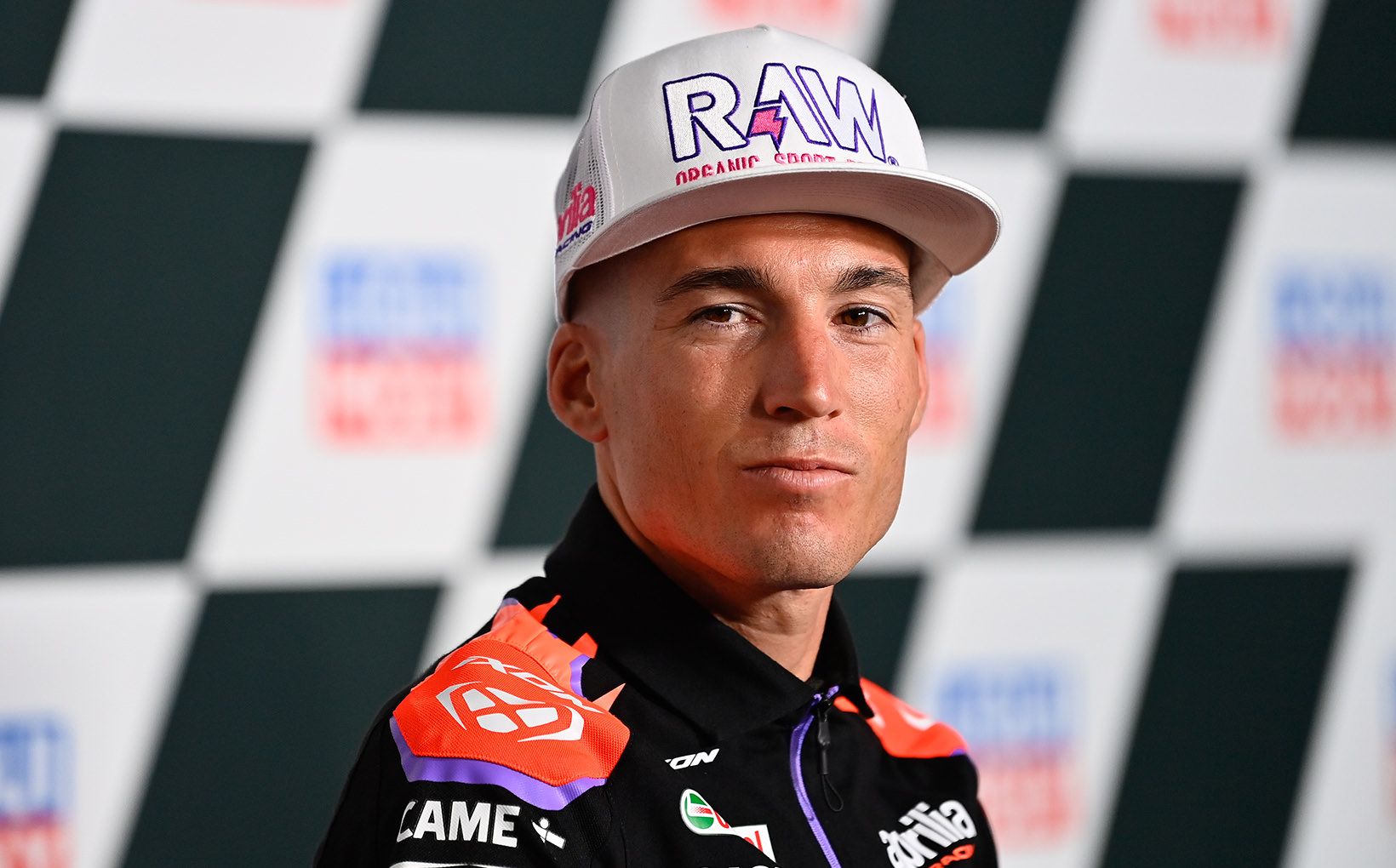 "In the last two races before the summer break, our goal must be to take home important points. This year we have shown that we can be consistently competitive on every track and in any conditions; consistency will be fundamental when the sums are drawn. I am highly motivated and confident that we’ll be able to do well on the Sachsenring."

"We are tackling a track that seems to adapt well to the characteristics of the Aprilia. The Barcelona test was positive and the Sachsenring will be an important test bench for confirming the good sensations of the latest races, where we have consistently improved. We are working hard and we’ll continue to do so this weekend. Step by step, we are reaching the level that we expect to be able to maintain."

“Last year in Germany I wasn’t as competitive ad I’d hoped. We’re coming from a disappointing race, so we are eager to improve and to recover that lost feeling with the front-end of the bike that would allow us to race at the front. Sachsenring is not among my favourite tracks, but if we manage to set the bike up right, we can have fun. Assen is clearly among my favourite tracks, as it is both difficult and technical at the same time: last year I struggled there, but this year I’m better prepared. It will be a very challenging trip.”

We are super excited to see how this weekend’s race unfolds with changing conditions, tyres being questionable with the hot conditions and which bikes will appreciate the circuit layout and those who will be punished by the numerous left hand turns. Be sure to tune in and enjoy a weekend of motorsport. Finally, for Marc Marquez fans, the multiple World Champion is recovering well with exercises to get up to 100% fitness plus Mir closely linked to be his teammate. The dynamic duo could be the answer to Honda’s problems whilst the red hot desire within Marquez’s soul the reason for his surgery. As a rider, you have to give him full credit for wanting to have the operation in America to correct his rotation problems with the humerus bone. It will be make or break for MM93 because if does not work, he will hang up the leathers. If it does work, the riders will be gritting their te