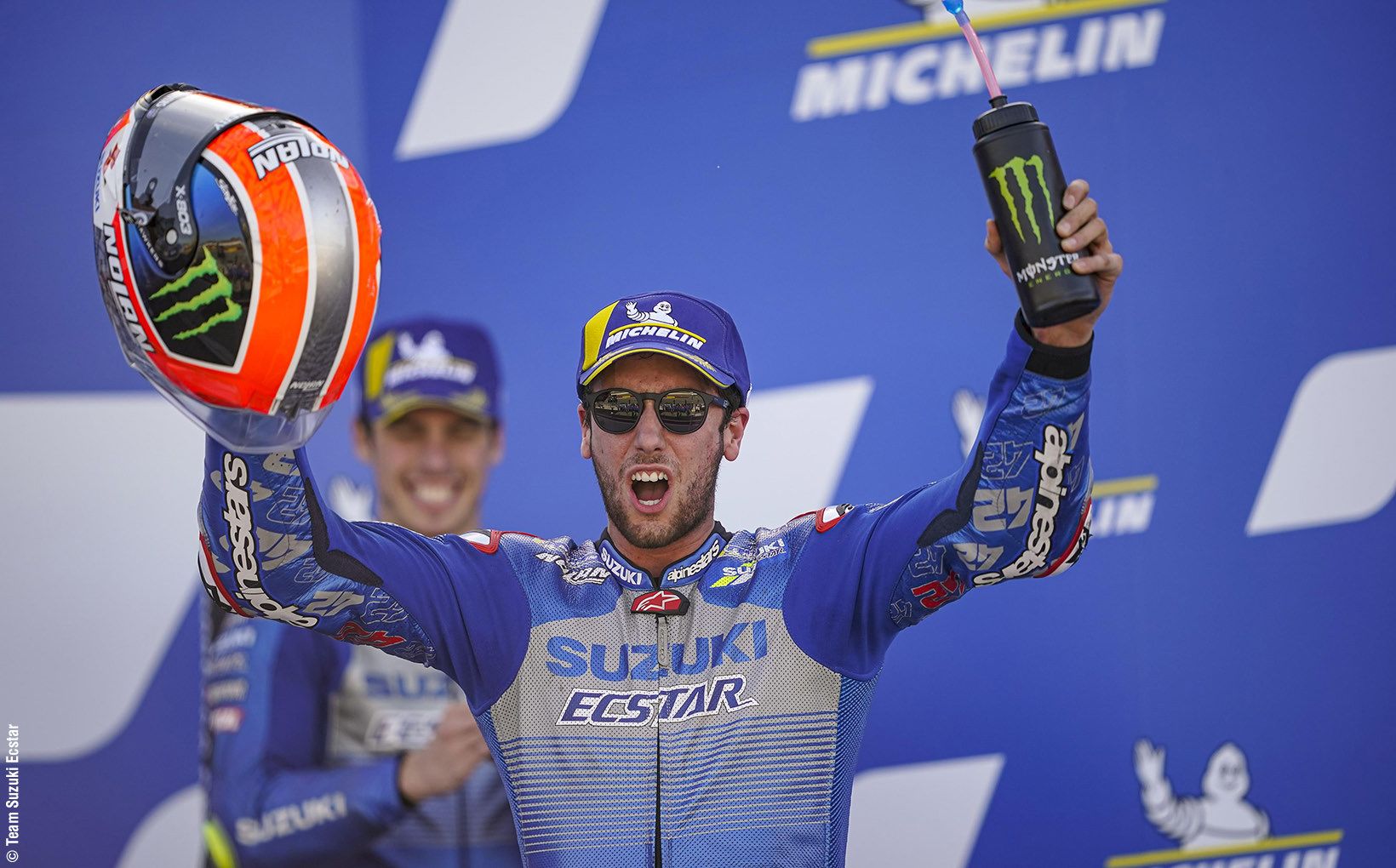 What a spectacular Aragon Grand Prix it was with drama, passes and absolute guts for glory with Alex Rins, Joan Mir and Alex Marquez taking the top step! We anticipated a challenging event for the riders and of course did not see Fabio Quartararo experiencing an unpredictable issue with front tyre pressures that certainly has shaken up the title race. The last few races of the season will be a journey into the unknown because it is anyone’s World Championship to win. No doubt, for Andrea Dovizioso the red beast is not working at its normal competitiveness and his gloves were thrown into the garage during qualifying. Regardless of his race pace and final position, Dovi is still within a chance. Ride of the day goes to Alex Rins after starting 10th on the grid and showcasing why Suzuki signed him up in the first place because when he is fast, he is hard to beat. The Spanish rider was red hot with total confidence, this was nice to see after a very up and down season with injury. The maestro of MotorLand Aragon is Raving Rins! His start was like a rocket ship, he went straight up to fourth and found form very quickly. There was no caving into pressure and was a well-earned victory. 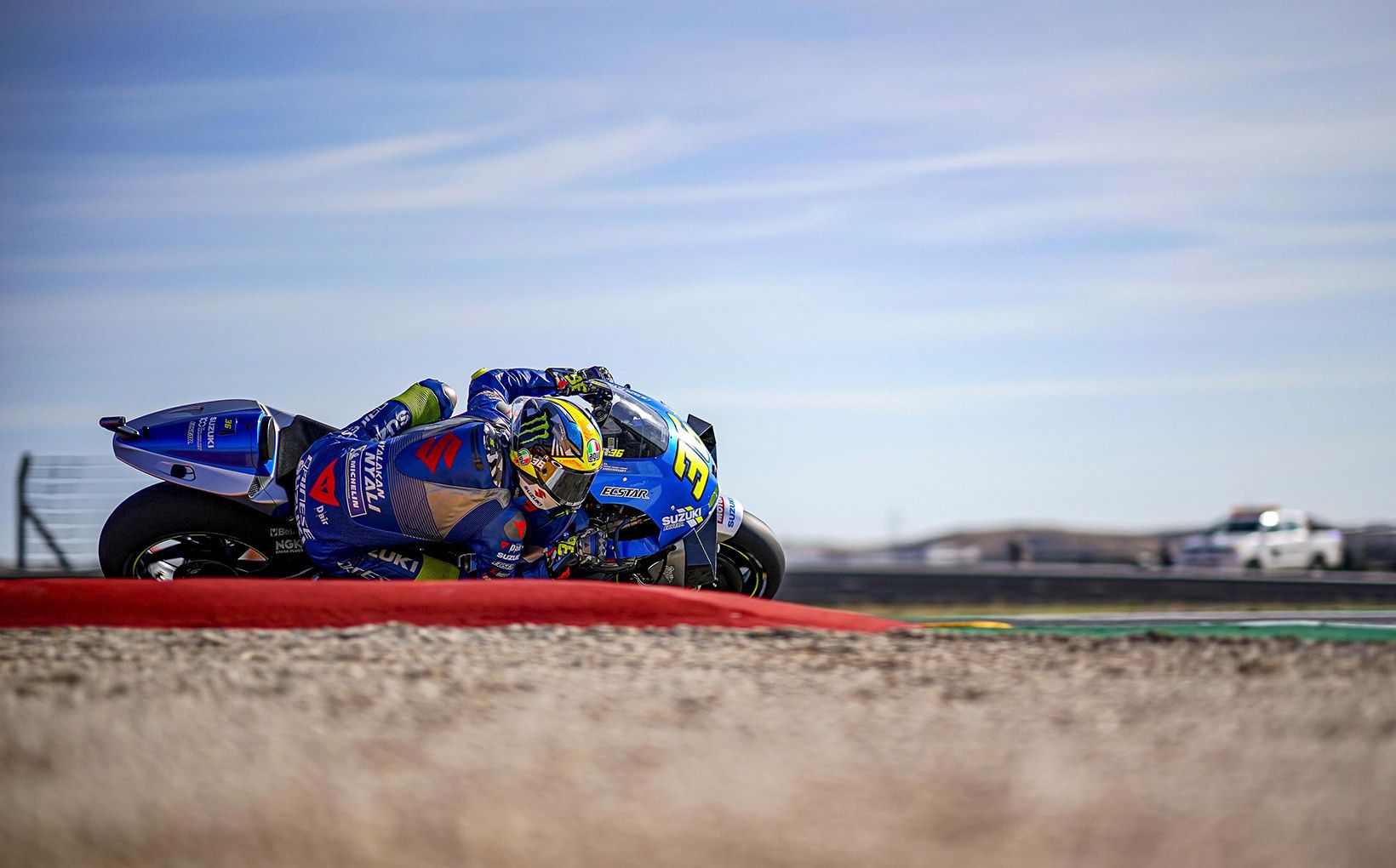 “I’m full of emotion! At the beginning of the season I really struggled a lot, and since then the team and I have worked so hard, and now we’ve won and it feels amazing! I was not sure that I could win from 10th on the grid, but I was able to do it! When I was chasing down the riders in front of me I could feel that I had good pace and the bike was working really well. I felt really relaxed despite having Marquez and Joan close behind, and I managed the pressure. It will be tricky to replicate this again next weekend, but for sure I will try my best! It feels super to be back on the top step!” 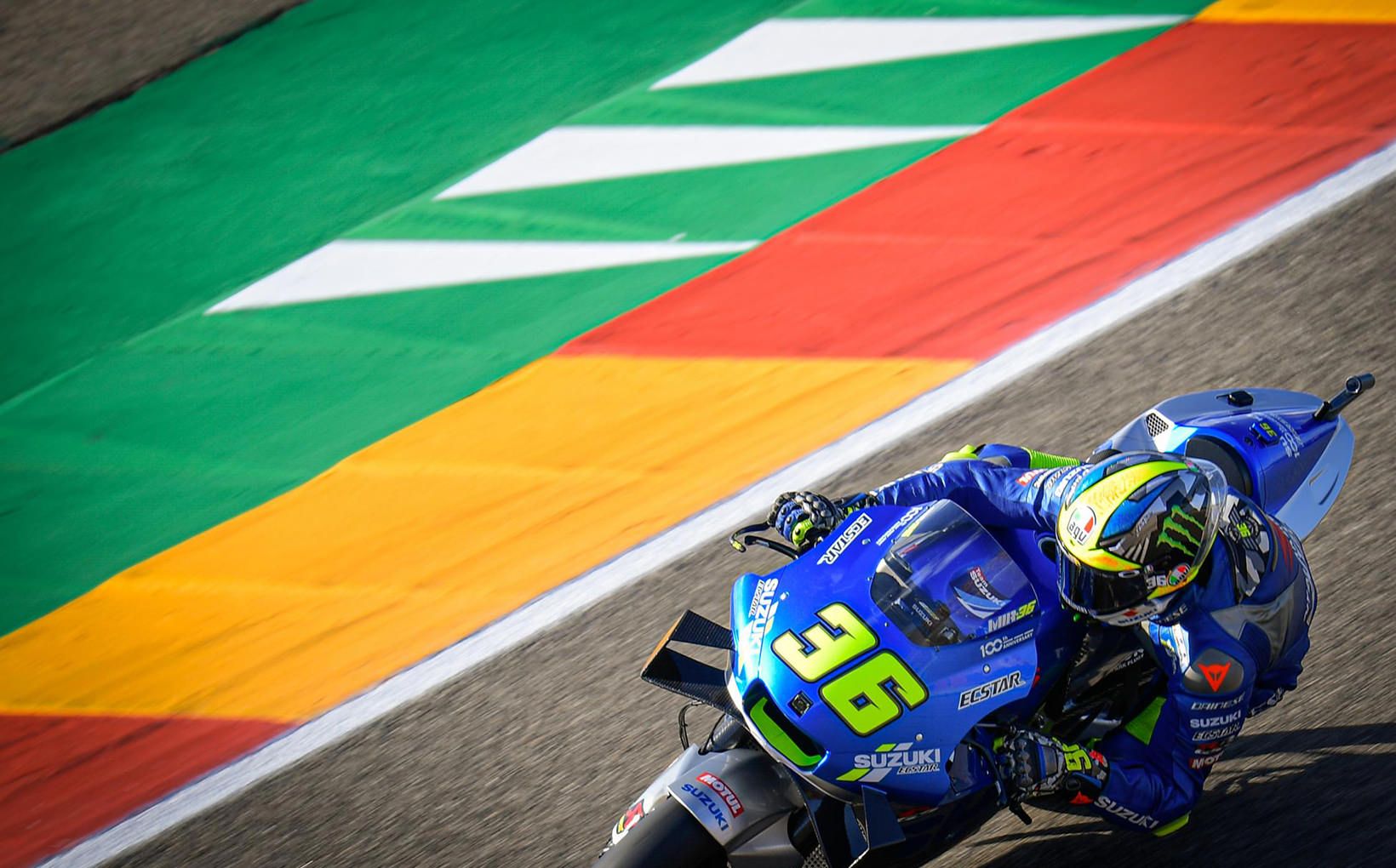 “I’m really happy! All the effort that we’re putting in every race weekend has paid off and I’m now leading the championship. In a way it doesn’t mean a lot because there are still four races to go and a lot can still happen, but it’s a nice situation to be in at the moment. I actually expected a little bit more from today’s race because at the beginning my pace was really good and I maintained everything well, but in the last few laps I started to struggle a bit with the front tyre. I had plenty of grip on the rear tyre but in the end it was better to take 3rd than to take a risk. I’m really looking forward to next weekend and hopefully I’ll be able to get an even better result.”

The fact Suzuki has finally achieved this success, it is a real credit to Davide Brivio and the Japanese manufacturer because others have not been so successful. Right now, Suzuki have a hand on the trophy with Mir whereas Ducati have their fingers crossed hoping the experience of DesmoDovi can help to secure the honour. Spanish riders on Spanish soil, say no more! To anyone who doubted Alex Marquez, he has definitely proven himself. Marquez has earned the right to be a front running Honda considering Cal Crutchlow’s major injury. The expectation was high and the former Moto2 World Champion is really putting in the work to earn the right to stand on the podium. With that said, it was a tough race for Crutchlow who was on form all weekend though experienced a slipping clutch that caused him grief. If this mechanical fault did not arise, we feel Crutchlow would have been upsetting a few Suzuki hearts. Regardless of the results, the jigsaw puzzles are being put together for Marquez, Maverick Vinales and Mir in terms of pushing the limit. It will be a true test of psychological strength for the French rider Quartararo as well as the others because a World Championship is so difficult to achieve especially when the grid is so competitive. 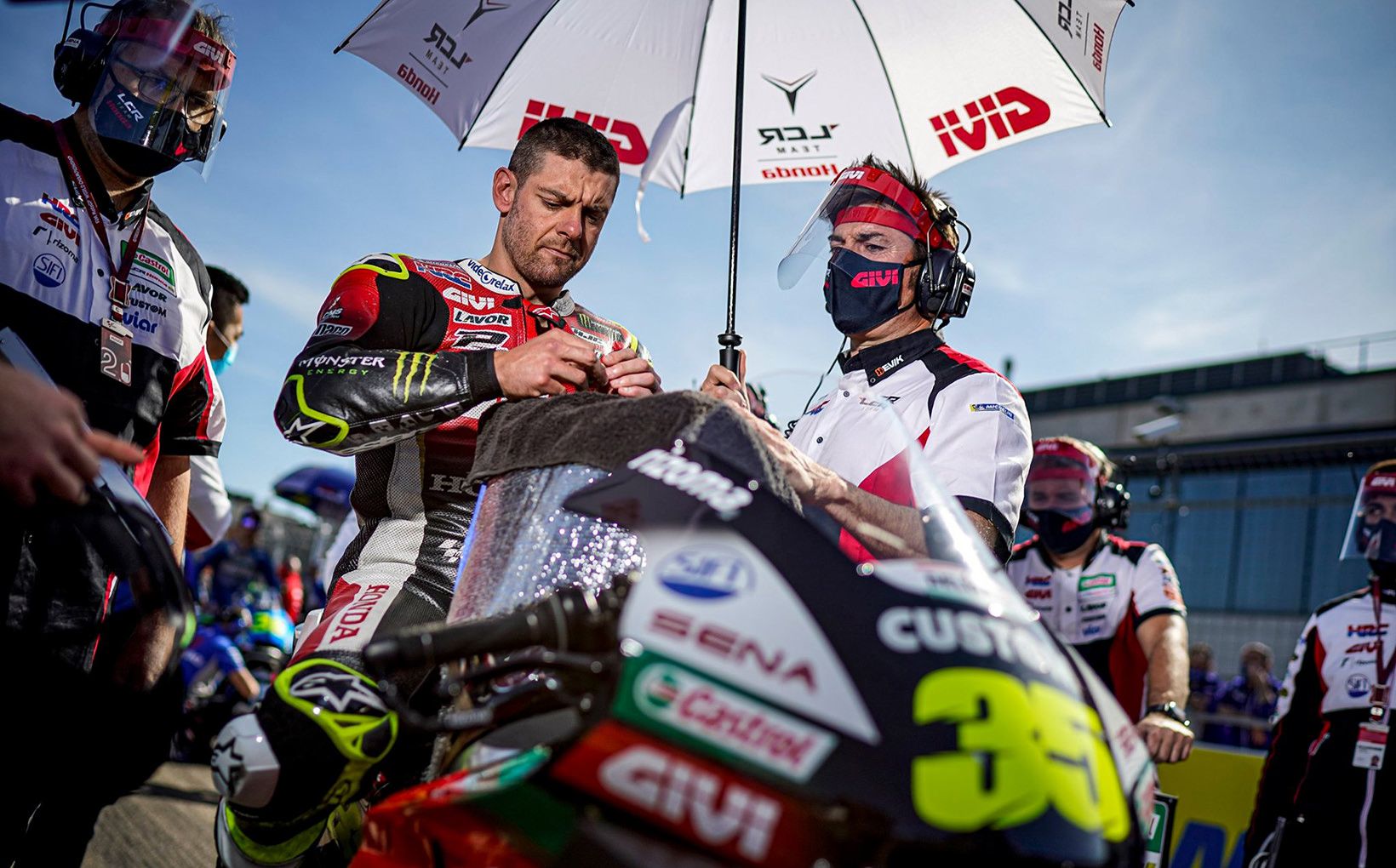 “Obviously we’re very disappointed with the result today. On the warm-up lap today we had a problem in the back straight with the clutch slipping on the bike a lot. So when I came to the grid I wasn’t sure how much to push the clutch off the start line because if I’d have really pushed the clutch I’d have been in a lot more trouble in the race. I had a lot of clutch slipping in the first laps until about lap three and then it continued less until lap six. But at that point I was in 12th position and I had to battle back through. The best result I could do was eighth place which I’m pleased with after the difficult moments at the start. I think we did a good job, now we have to look forward to next week and take some positives from today.”

In contrast, the Yamaha of Quartararo used a tyre that had not been used before which caused some serious issues. These are the moments the riders will reflect on, the team will assess and debriefs undertaken to determine how to approach the next event. This race in Aragon was the first time a Grand Prix was held without a premiere class Champion on the grid. That demonstrates and showcases how important this 2020 season is for those who are considered underdogs. Confidence is a key especially when pressure and mind games are thrown into the mix. 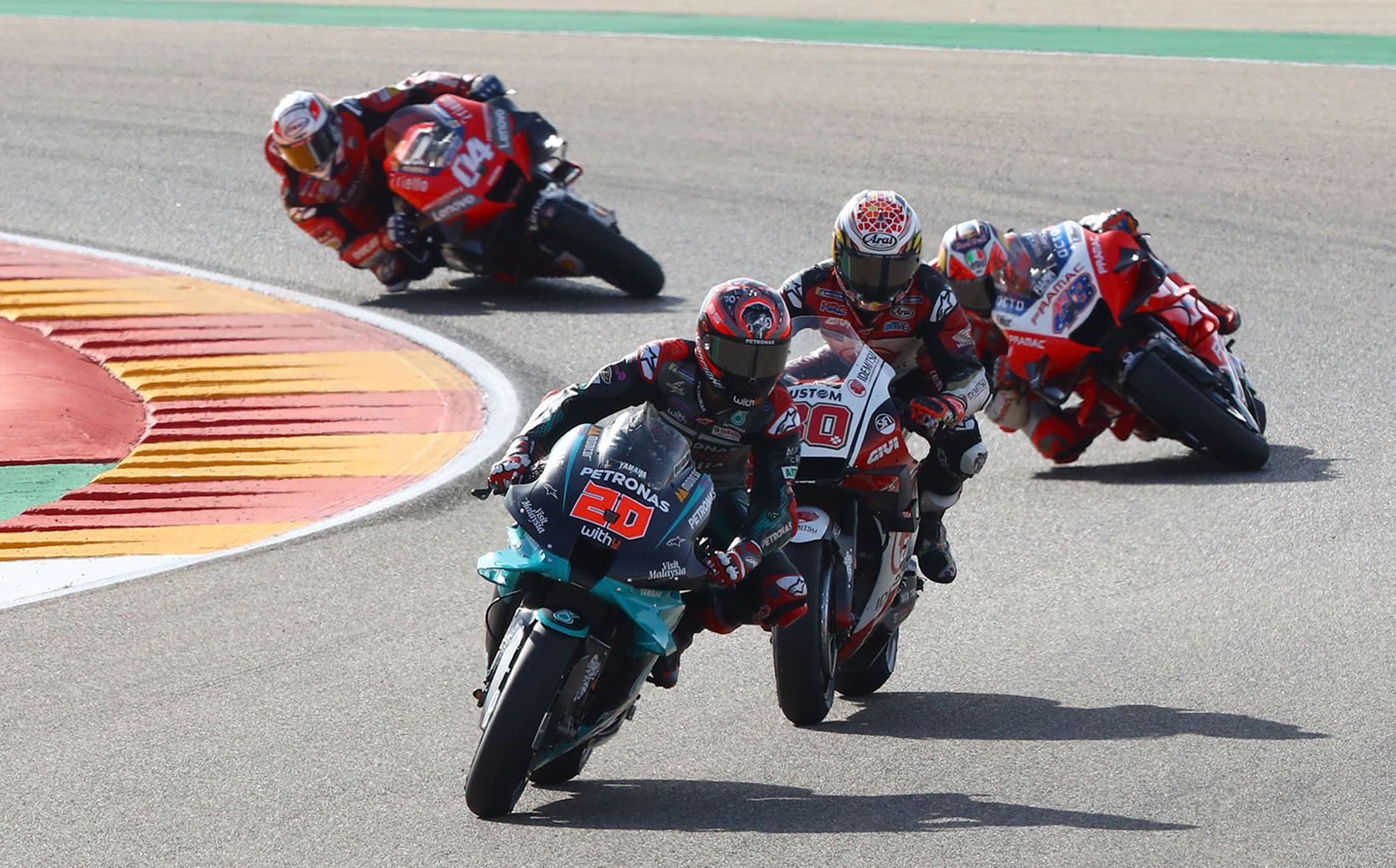 “It was a really strange race. We knew that our pace was not the best but we were not expecting to finish in this position. I was expecting to be further up the field, but we had an issue with the front tyre. It’s the first time we’ve used this tyre, it felt great to begin with in the opening three laps, but the pressure became too high. It was not possible to ride, I had no feeling in the front. I’m disappointed because without this problem I think we could have been able to fight for a better result. It isn’t easy to understand why but we’ll look and prepare for next weekend, when we are here again.”

If you were sitting in the Marc Marquez living room, you would have felt an electric energy of happiness, stress and adrenaline. Baby Marquez has blossomed over two weeks and it is a major step in his MotoGP career considering the previous history with other Honda riders not being able to conquer the Honda bike. Lap after lap, he was stronger and putting in the lap times. Talk about comfortable! Without a doubt, there will be people out there saying because he is the lead Honda the team is fully focused on giving him the best kit. With that said, it takes a rider to deal with pressure, expectation and be confident. These are three aspects that baby Marquez has done a brilliant job in demonstrating on and off track. 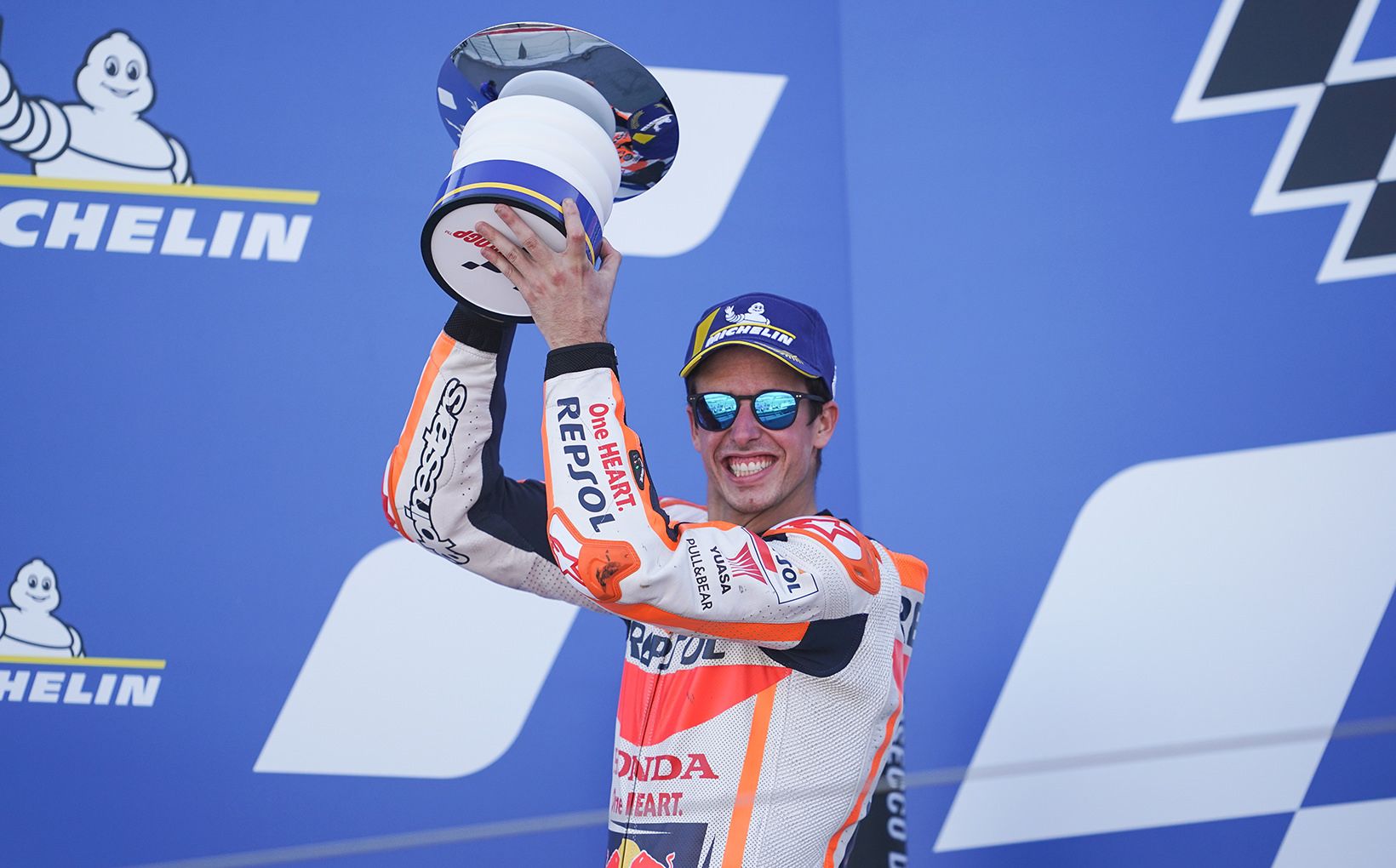 “Honestly I didn’t expect to get a podium from starting in 11th but I was able to recover well. I found myself in a good position, so we did what we could! I knew I could take quite good care of my tyres for the end of the race. I enjoyed every overtake, but I was really on the limit with the front tyre. Even so, it’s great to be back on the podium and to do it in the dry, we really showed our potential all weekend. We still need to work on Qualifying, but we can enjoy what we achieved today. I want to again say thank you to the Repsol Honda Team for believing in me, supporting me, guiding me and never giving up. They gave me an amazing bike and I enjoyed the whole race.”

As the laps kept rolling on, the riders kept changing places, they were bunched up considerably though a day of misery for Ducati in a way with such a lack of performance. They have not been consistent and with the renewed strength of Honda, this will be causing a few problems for the Italian outfit in terms of rider demands especially with a title contender struggling to compete with younger riders! A similar set of circumstances arose for Jack Miller who also had no pace. One race he is super fast, qualifying performance outstanding and then it just turns and goes in the opposite direction during the race. 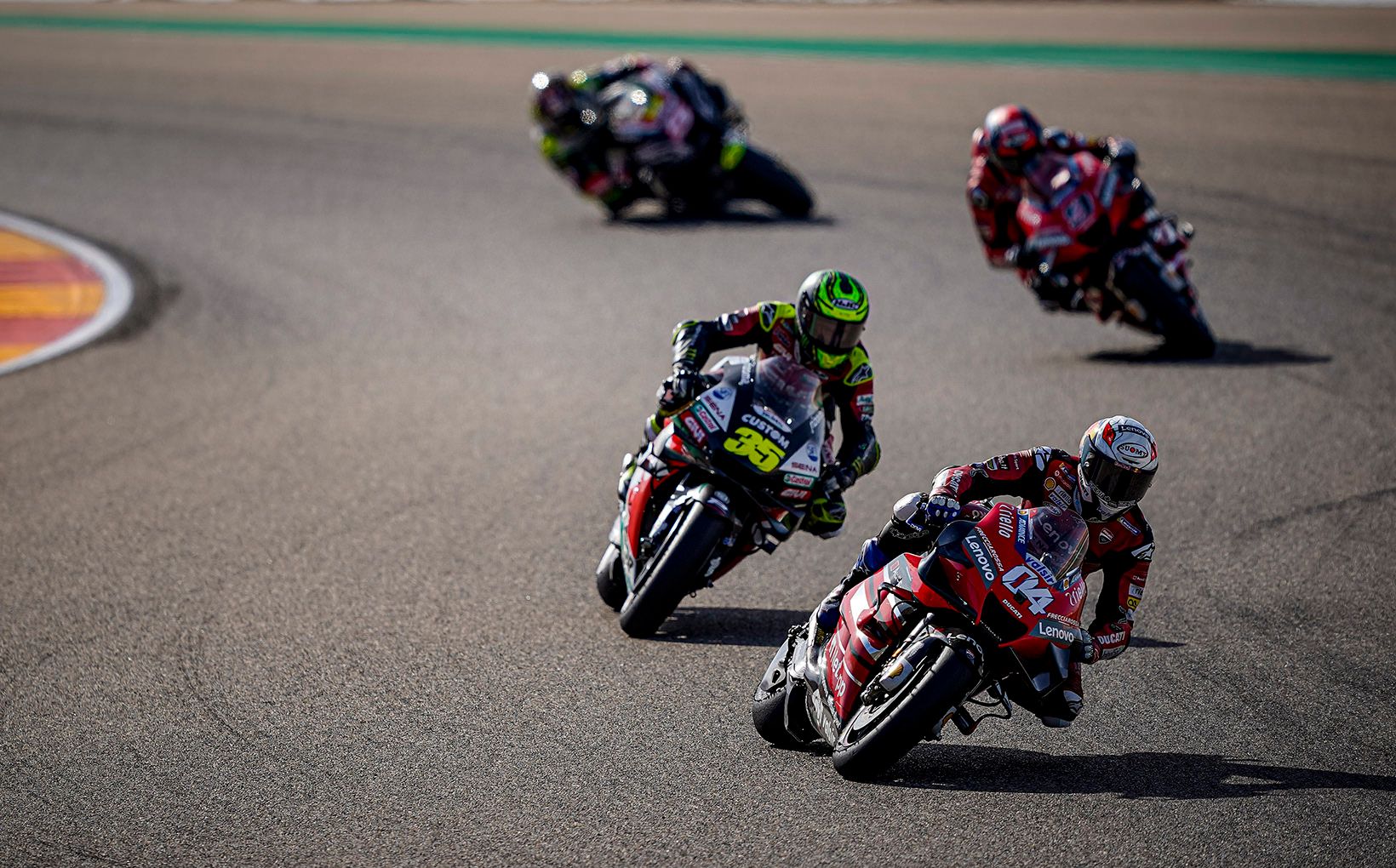 "Today we managed to achieve the best possible result considering that we were starting just thirteenth on the grid. Unfortunately, we did not have the speed to fight with the front riders, and maybe, with the highest temperatures compared to the last few days, the medium tyre didn't behave exactly as we expected. Surely, now we have some data to work on ahead of the next race weekend, which will always be here in Aragón. We hope that the weather conditions will allow us to start working consistently, starting immediately from the first free practice session on Friday". 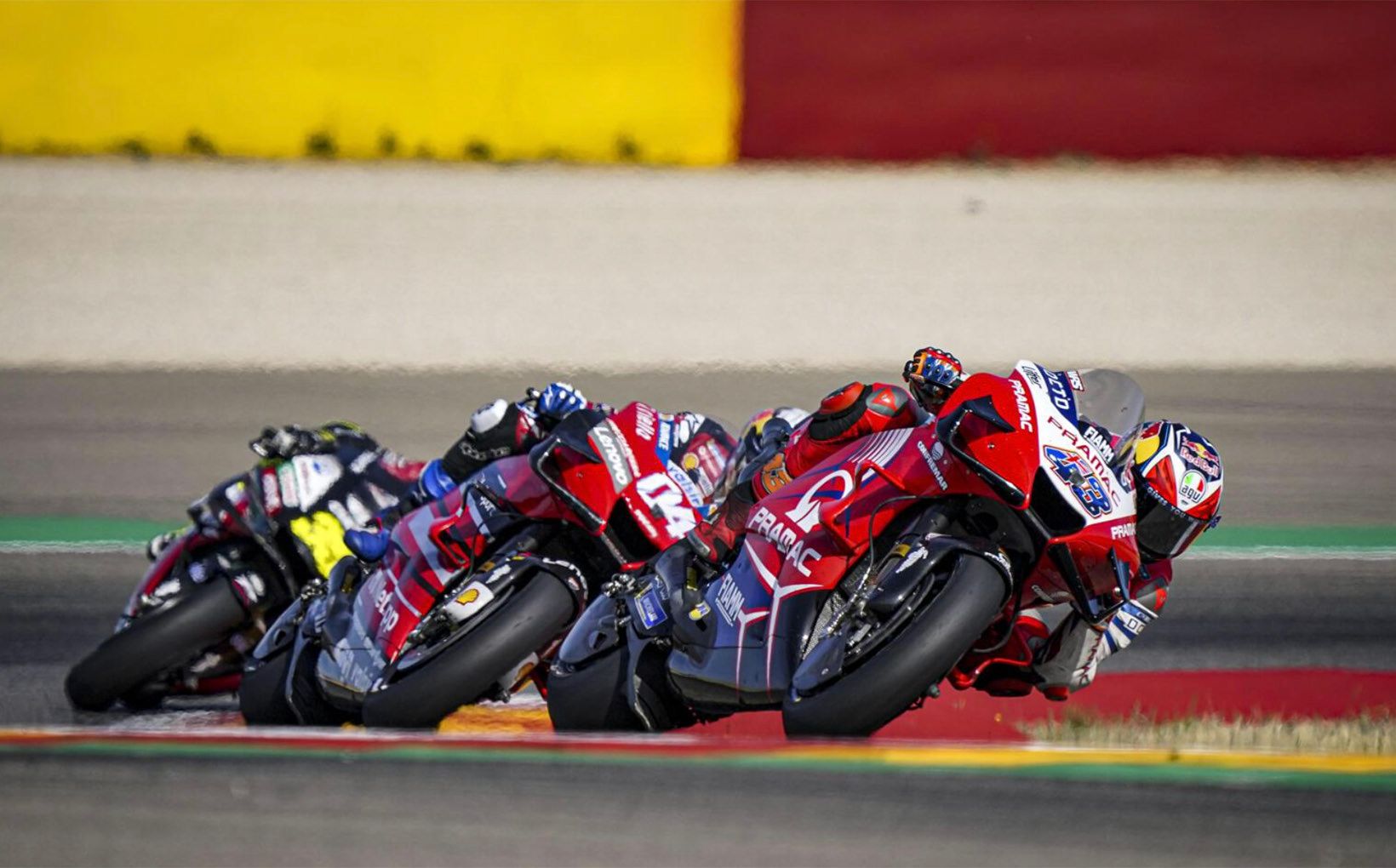 “Definitely not the result we wanted but we did everything we could. It was not a bad race, but I had no grip and it was very difficult to keep a fast pace until the end. Anyway, next week we will race here again and with the data we have hopefully we can do better.”

It was a much better start and race for Vinales who is considered an emotional rollercoaster from one race to is the next. He led a great race though was tackled by Rins, Marquez and Mir. Fellow rival Rins packed on the pressure, never stopped believing and had the exact same tyre choices. The speed and drive out of the corners was similar for the two riders although Rins took an early lead with sixteen laps to go. The edge grip of the Suzuki is outstanding! With that said, the Yamaha machine has certainly improved and will watch back the race to determine how he can improve for the next race that takes place at the same circuit. 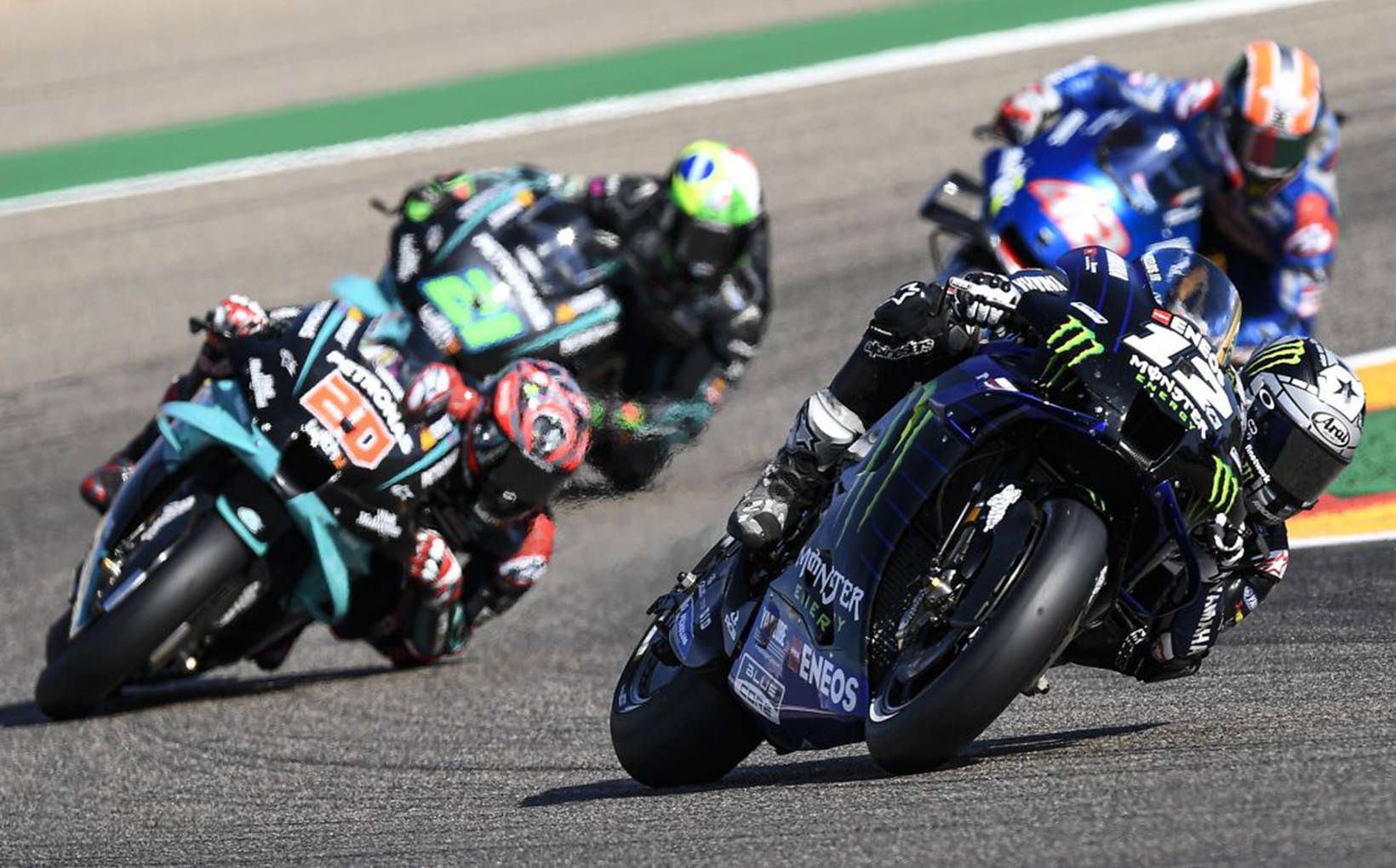 “I’m so happy I had a good start. I was ahead of the group by 0.7s after the first lap. That gives me a lot of confidence. I was very happy with my opening lap. The soft front also gave me a good confidence this weekend. My problem was the rear. After five or six laps it had a big drop on the left side. I was losing time in sectors with a lot of left corners, but in the right handers I was quite fast, which was good. We got the maximum out of the bike today. We need to work for next weekend. Our bike has its strong points and weak points. We can't make its weak points stronger, but we can make its strong points even stronger by working in the direction that suits the Yamaha. The goal is to start at the front again next week and then put in a faster rhythm than today. At the end of the race, I was able to put in the fast laps again though. I rode those laps with my eyes closed. I was pushing that hard, because I wanted to have the opportunity to push Joan. I honestly tried, and it was good because now I know I have something extra to give in the last laps if I need to in the next few races.”

8 different winners to date in 2020! What could happen next week?