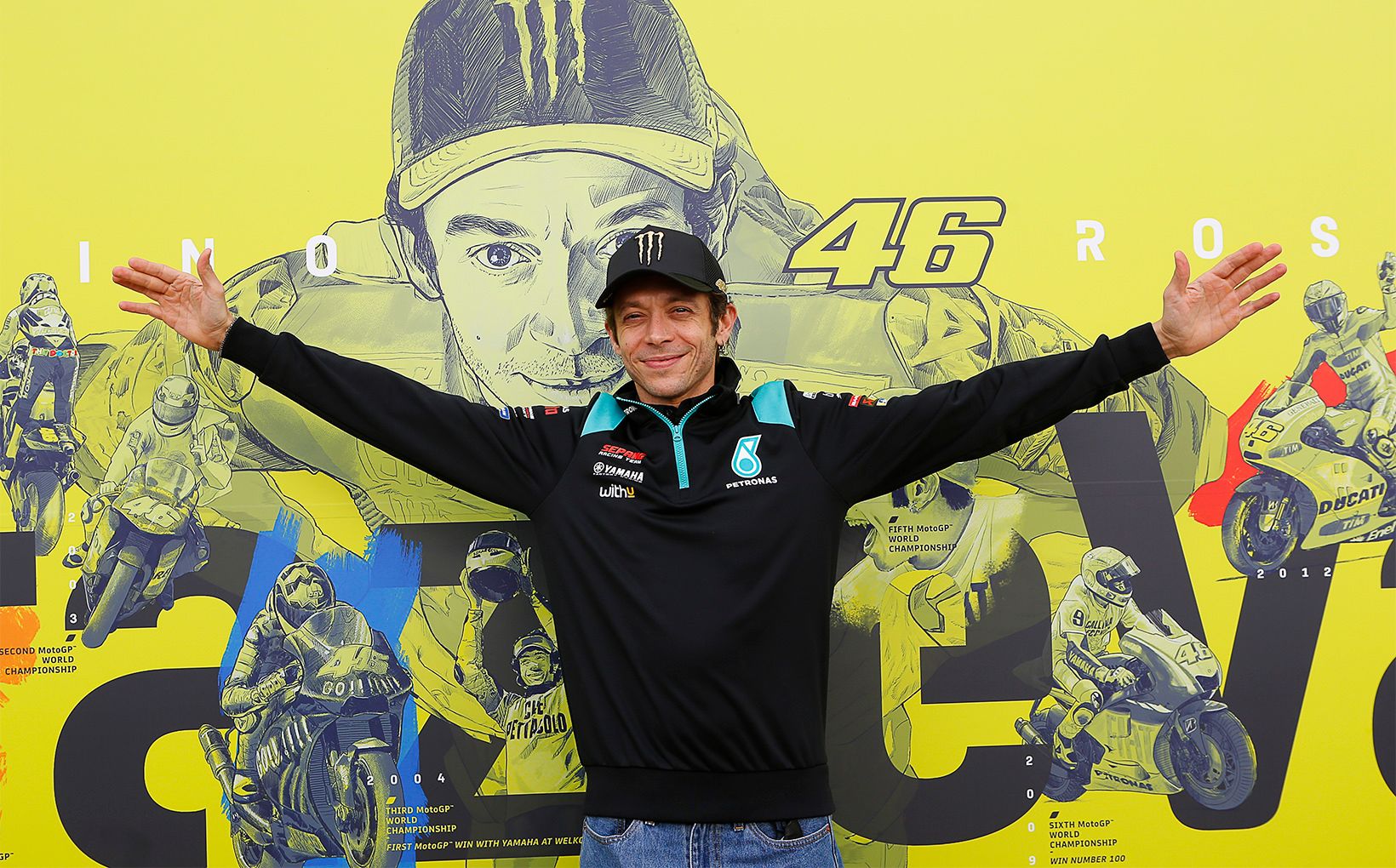 The last race of 2021 has arrived and we say goodbye to Valentino Rossi as he finishes up his career with one last race, going into retirement and farewell to Danilo Petrucci who no longer has a ride in the premier class, making his way to compete in the 2022 Dakar with KTM on two wheels. Both riders have been incredible ambassadors of the sport and in particular, Rossi a guiding light for so many younger riders, fans and supporters across the globe. We say #GrazieVale for some incredible battles although seeing him finish up is hard because he has been a part of our lives for such a long period of time. The days of watching him in the early years, to some of the most famous battles with Sete Gibernau, Jorge Lorenzo, Casey Stoner, Andrea Dovizioso, Marc Marquez, Marco Simoncelli, Max Biaggi and many more. It has been a privilege to watch him trackside and at some of the best circuits in the world, one being of course Phillip Island. The smell of the tyres, engines and oil as they scream past the top of Lukey Heights at the Australian circuit, the extreme sweat and humidity at Sepang with the final hairpin, the grandstands of yellow in Mugello with an incredible track pushing riders to their limits, the wet weather and chaos of Le Mans, the history of Barcelona and so many others that make you realise, how incredible these riders really are at high speeds with incredible control. 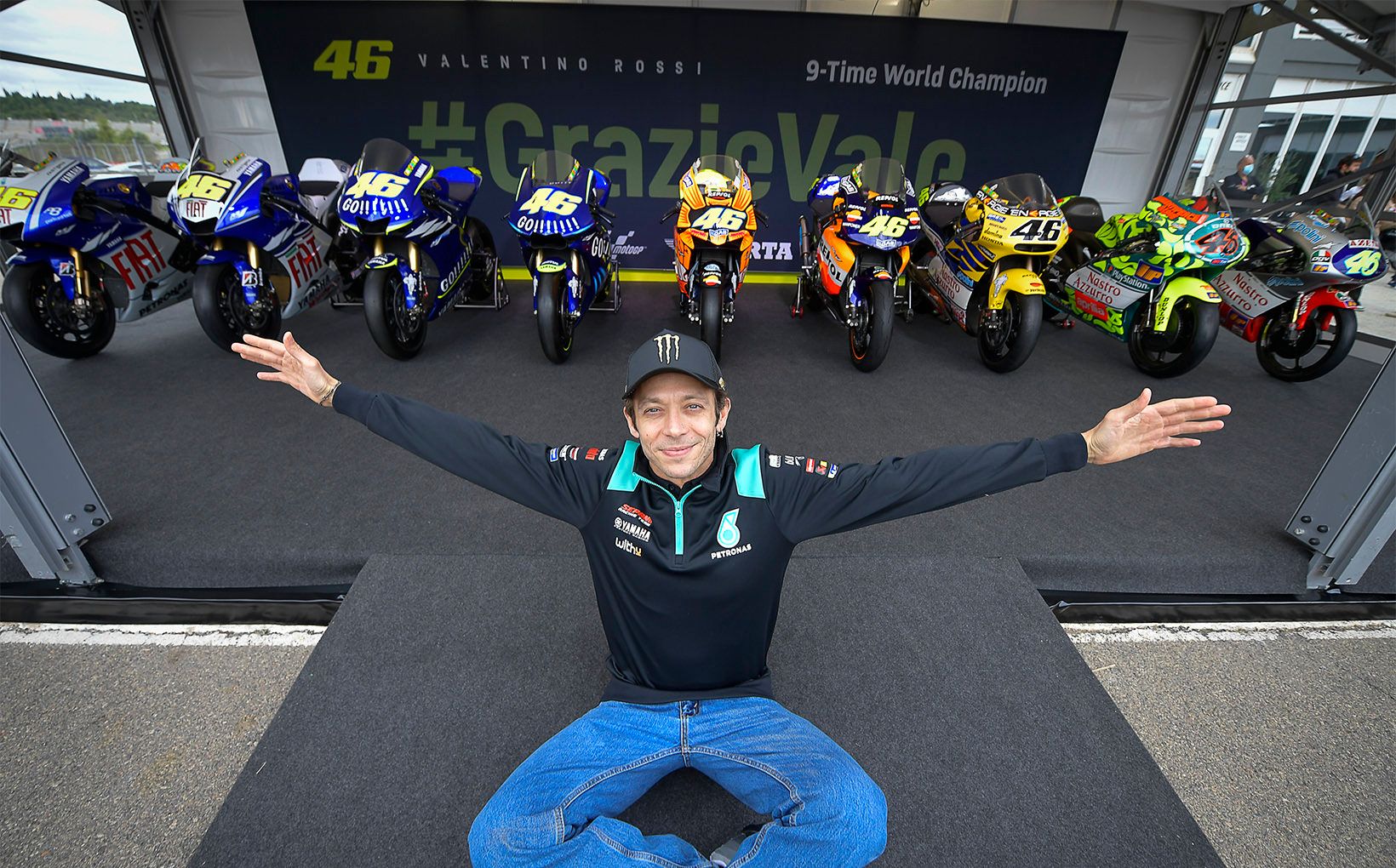 Growing up and being trackside to witness the greatness of Rossi, it has been an honour as we witnessed the growth of an empire and true icon in the sport. “The Doctor” has always wanted to put on a show for the fans, represent his country with a smile and push himself continuously. As the level of MotoGP changes and increases, Rossi is at times in 2021, the fastest he has ever been, although it is not enough with the dynamic abilities of the younger riders who are just going to the extreme in order to win. Total sacrifice and something Rossi is very familiar with. As he retires, the Italian rider now has a family to look after, a baby on board, a job to guide younger talents and will also stay competitive by competing in various categories of four wheel racing. On the other side of the garages, Petrucci has been a wonderful rider to interview, interact with and watch. One of the nicest guys in the paddock, it is a real shame to see him depart from MotoGP, although the Dakar has gained a true asset with his drive red hot to secure a top finish in this gruelling desert race. It has been a solid ten years in the sport for Petrucci, still smiling even though his results have been far from ideal. We reflect on his first win with Ducati, how dominant he was that day and the tears of joy as he joined his team pushing his weight levels to the brink of all day hunger in order to win. 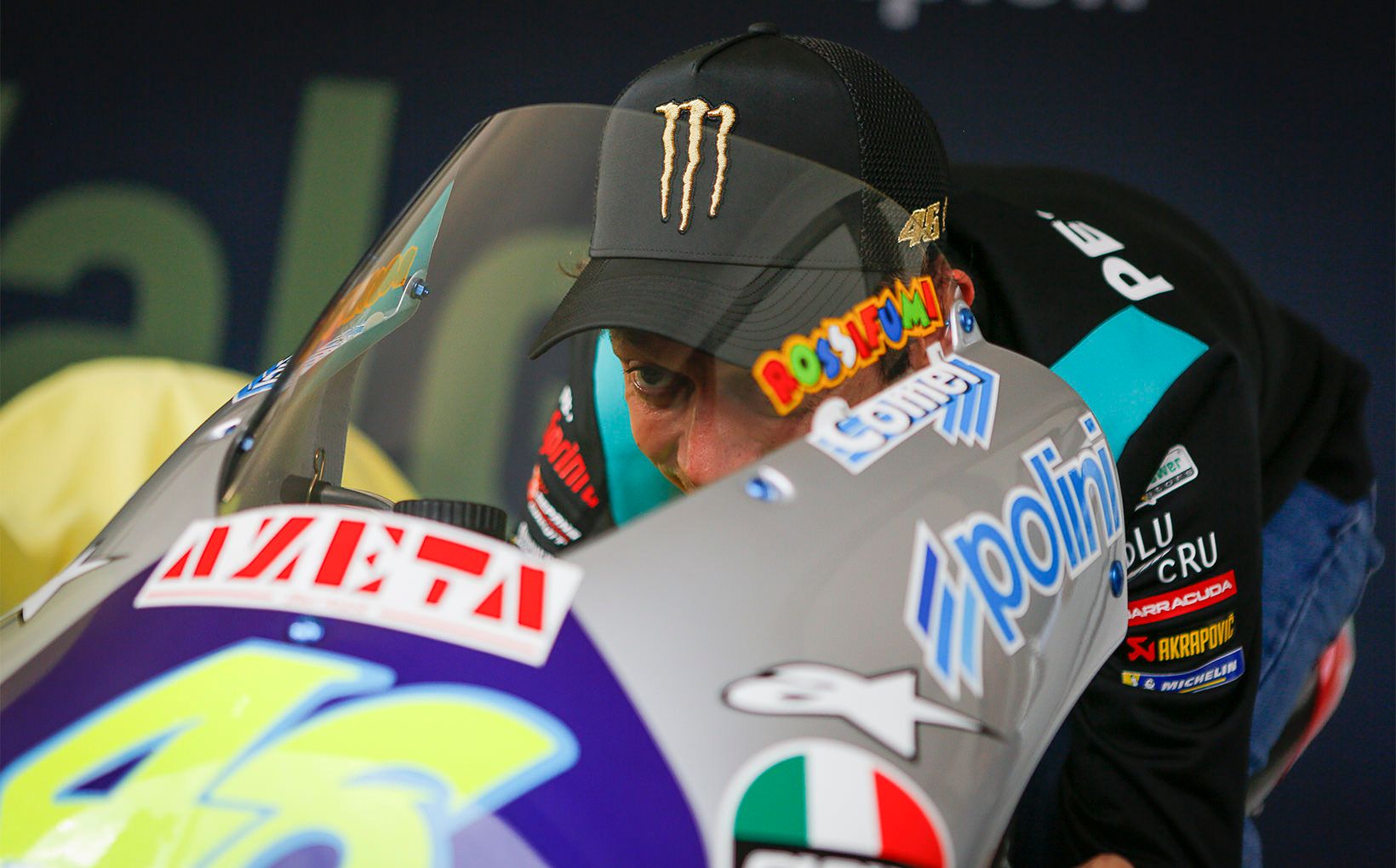 “Valencia is always a special weekend and can be a difficult race in different aspects, especially as it is always the final round of the year - apart from last year when we ended in Portugal. However, it is somewhere that I have had some very good times. I’m hoping that we have some good weather there so that we can focus on ending the final race in the top-15 and take some more points.

Although it will be my last race in MotoGP I feel normal and I think that’s okay, especially as this has been a very long season; maybe the days after the weekend will be different this year, but we will see. I hope that I will have the chance to say ‘ciao’ to my fans in a good way and to say thank you for the support.” 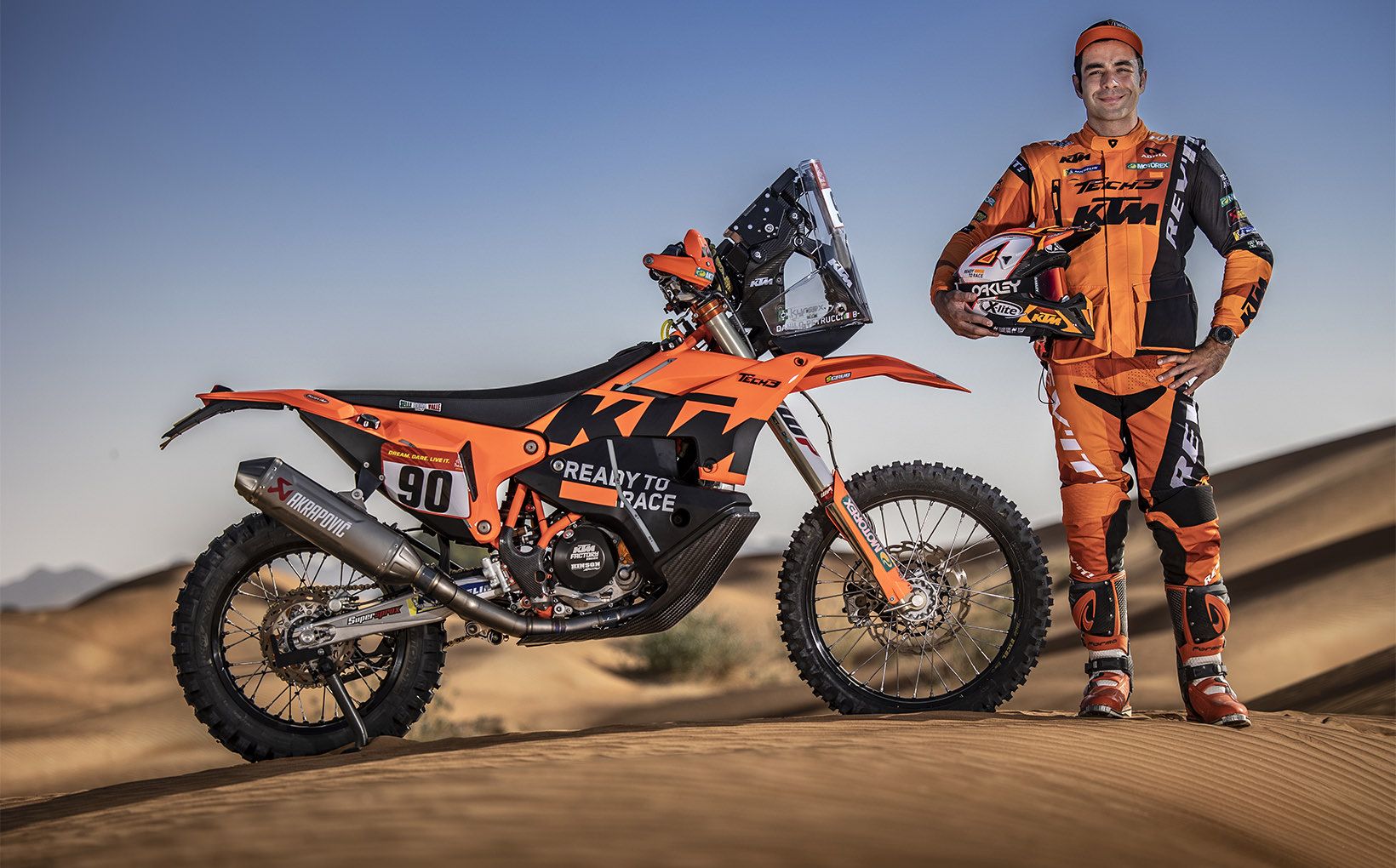 “For me it is really a dream come true to race the Dakar. It’s an event I’ve always wanted to do since I was a child when I was watching video tapes of the Dakar Rally from the 80s and 90s. Now, thanks to KTM, this dream is coming true. First, I would like to thank KTM for this great opportunity; I think I will be the only rider that in just over one month has competed in MotoGP and then the Dakar Rally – so it is with great pride that I go there. My main target is just to finish the race and enjoy it. The first approach was to have some road book training with Jordi, he competed in the race many times and finished on the podium, so he has been great in helping me learn this special art. I had my first taste of riding the KTM 450 RALLY recently at an initial test in the Dubai dunes, where I was with KTM’s Dakar champions and I was able to learn so much from them – it was great to see them riding, and they were super nice and helpful to me. I hope the training for the next month will be enough; for sure it will be a tough race, but I am excited.” 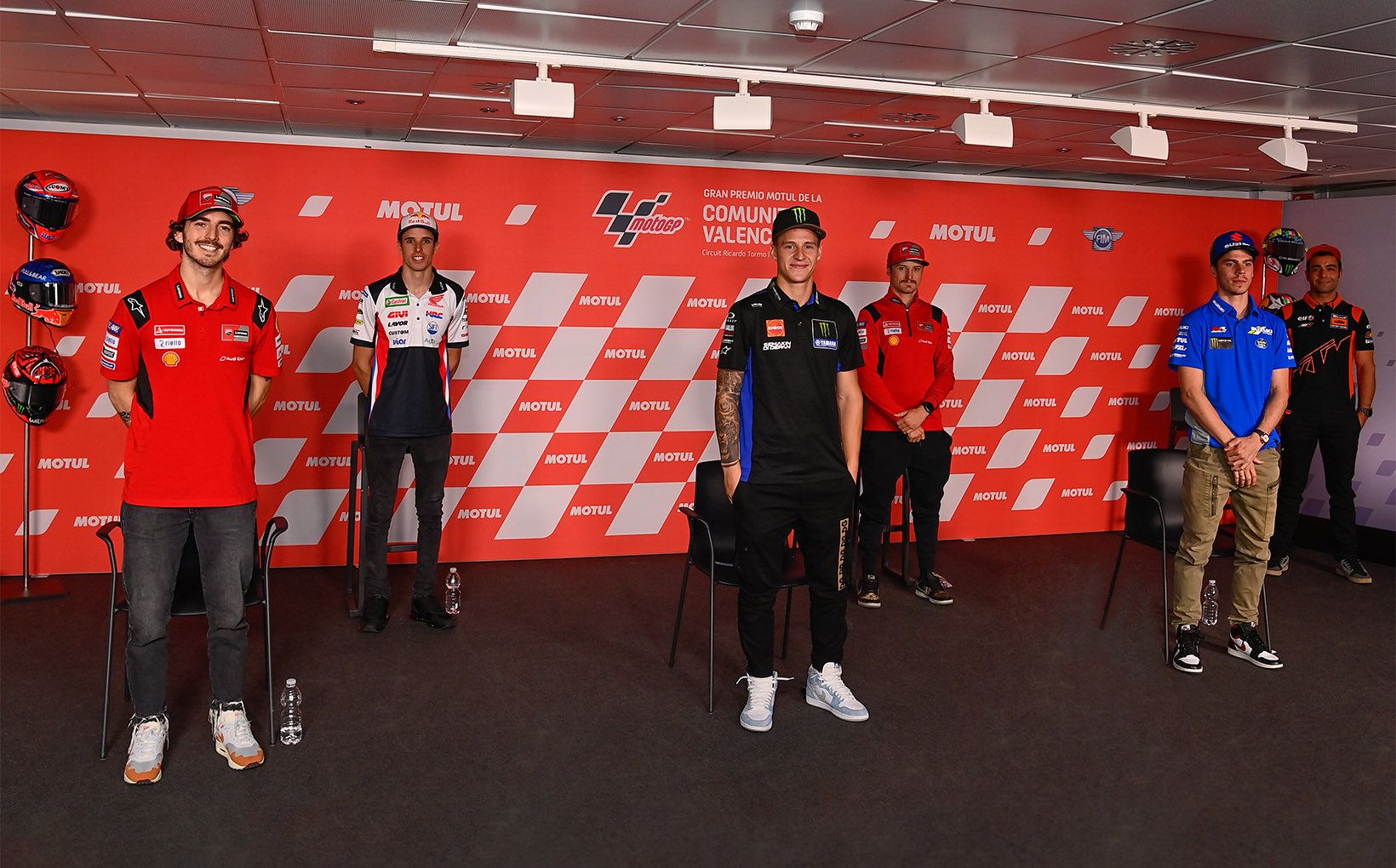 With the individual rider Championship battle finished, every team has an opportunity to end the season on a high. The one rider who wants to battle until the end is Pecco Bagnaia who has been on fire in the second half of the season. At a circuit where he normally struggles, Bagnaia is hoping for a reverse of luck, looking to go faster and feel more comfortable on Spanish soil. He will be followed by Jack Miller who is smiling, happier and wanting to focus his energy on the final race and upcoming testing schedule. They will be chased by the newly crowned World Champion Fabio Quartararo aiming to recover after his first crash of the season last weekend. The French rider requires a better qualifying position which he normally achieves in order to stay out of trouble and start off the weekend in the right direction: going forward not backward! This weekend we are guaranteed to see thrills, spills, tears and celebrations with #CiaoValentino the headline of the weekend. There is everything to play for in the final event because good energy and a positive mindset can be all the difference in shaping up for the next season in order to be ready from lights out race one in 2022. 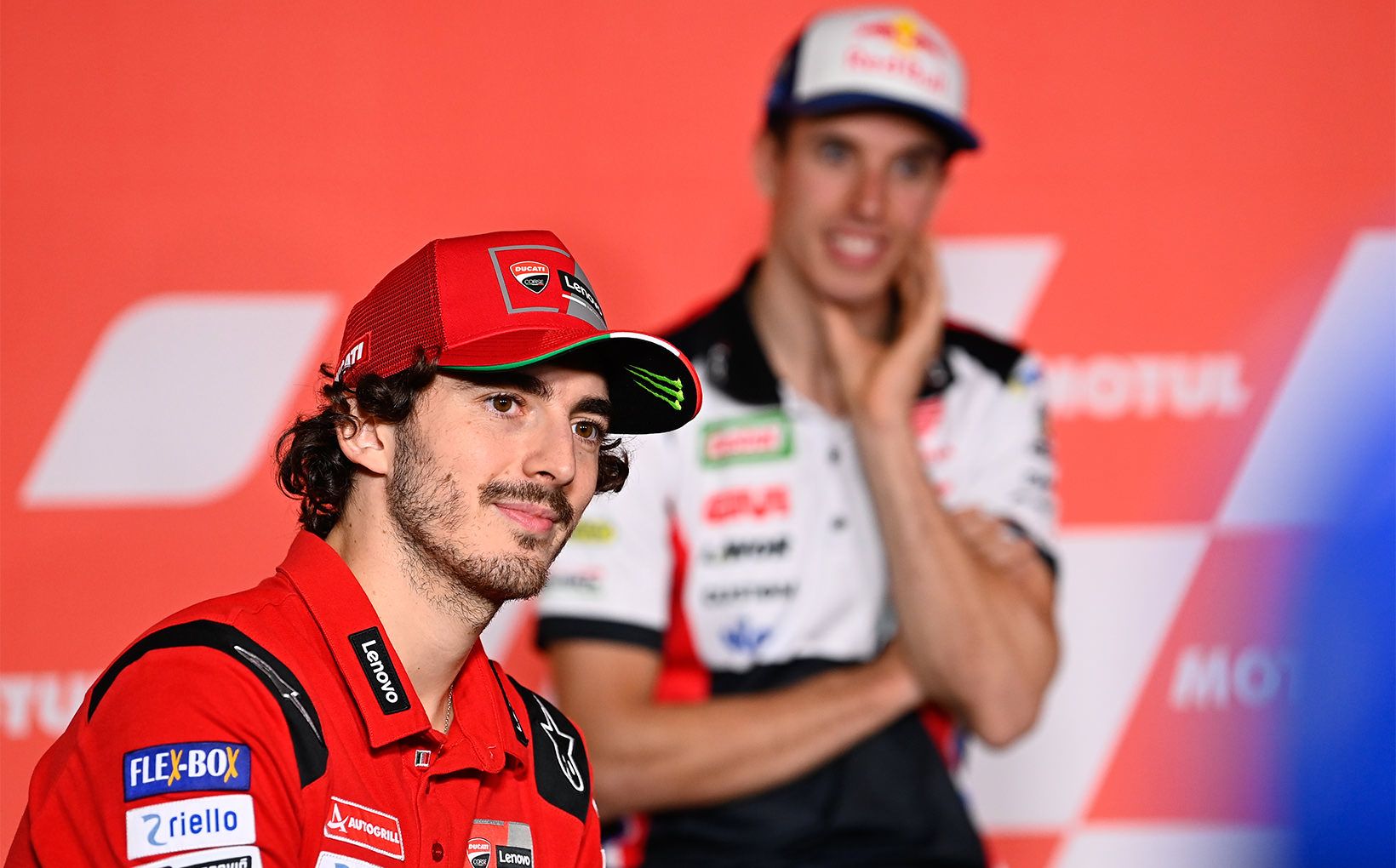 "After the weekend in Portimão, I feel really charged up for the last race of the season. In the last GP in Portugal, everything was perfect. Since Friday, we had been fast, and we hadn't had to make any particular set-up changes to the bike, so I hope the same will happen here in Valencia. This is a track I like a lot, and in 2020, I was back to having positive sensations on my Desmosedici after two difficult GPs in Aragon. This year, we arrive in Valencia at a particular moment, where everything is going really well, and my feeling with the bike is very good. I'm ready to fight for the win again and try to take the team title after winning the constructors' title last week". 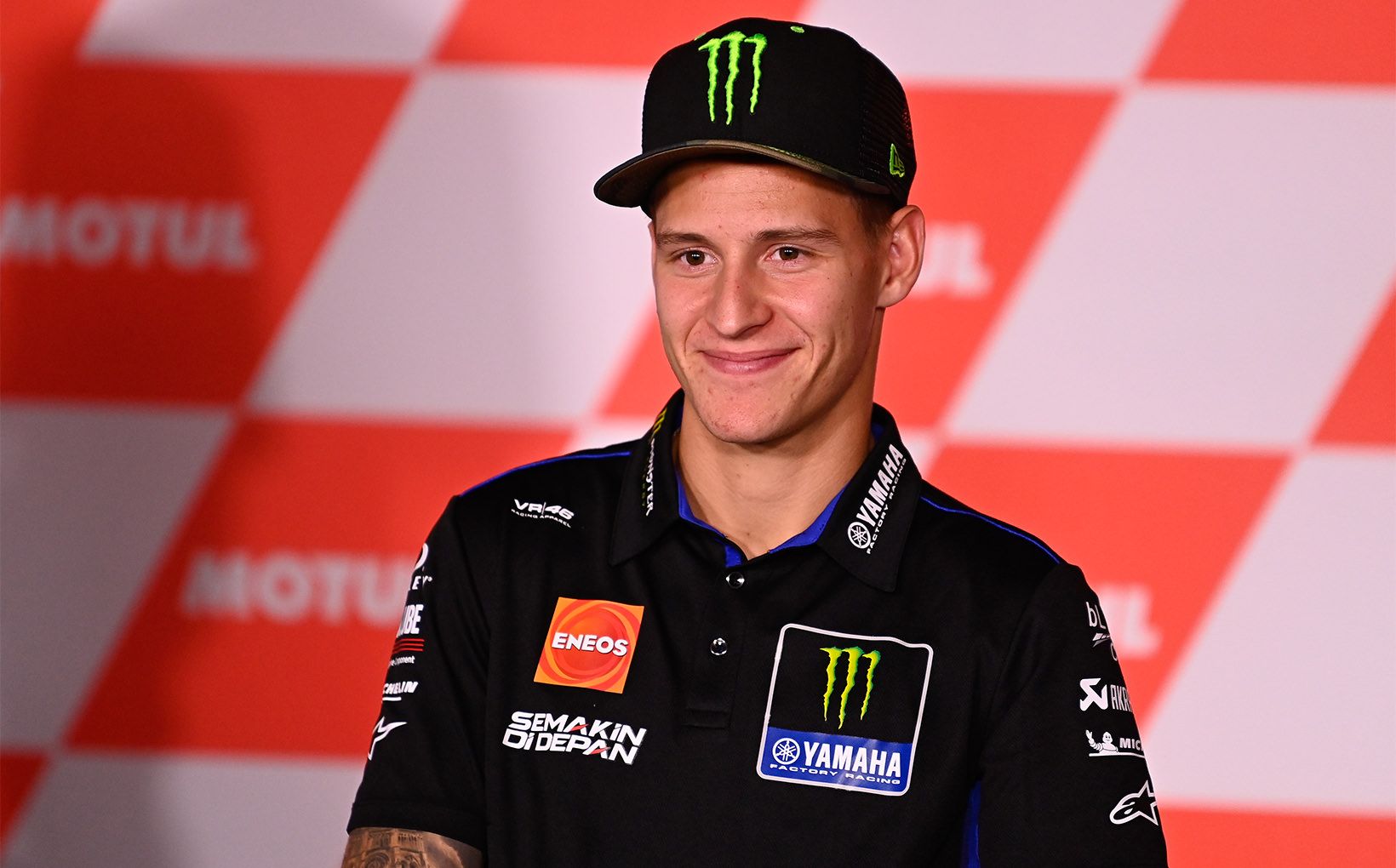 “We didn’t really get out our full potential in Portimão, so I can’t wait to start riding again and do better in Valencia. This weekend I will focus a bit more on getting a good qualifying position. That will already make a big difference for the race. Overtaking at Valencia is not easy, so the further we are up the grid the better. I really want to enjoy this race because it’s the final GP of the season, and I want to end it with a good result. I also want to help my team. There’s still a chance of the Team Title, so that gives me extra motivation to push hard in every session.”

"To be back on the podium at Portimão was really good, and now the goal is to finish the season fighting for another good result at Valencia. I am really excited to be racing here again this weekend. It's a really fun track and probably one of my favourites on the calendar. The characteristics of the Ducati are well suited to this track, and last year I came very close to winning, so I'll try again this year. After the constructors' title, we have a chance to win the team title here, so I'll do everything I can to help my team reach that goal too!" 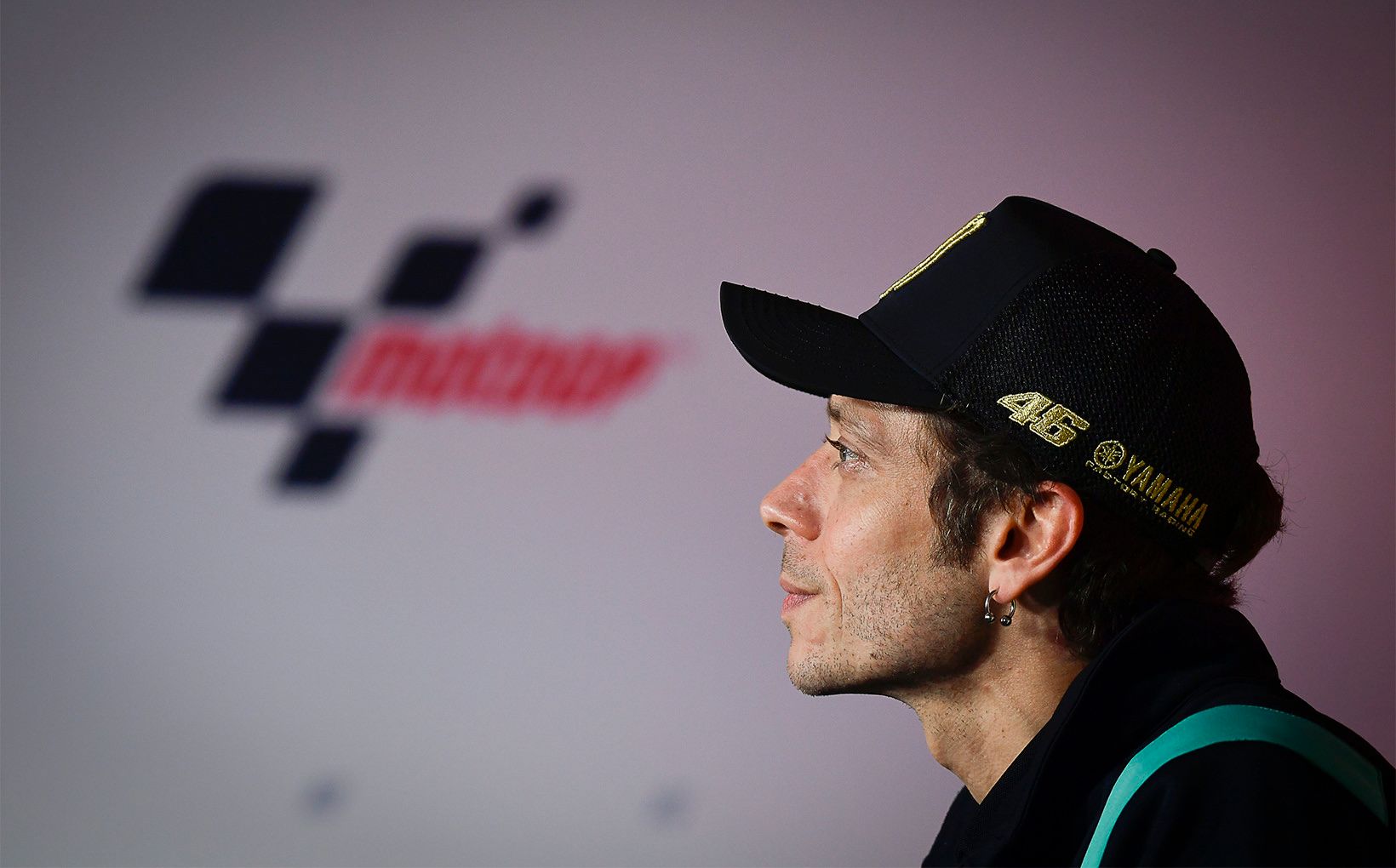 To the Rossi fans out there, what are some of the races, moments, battles and celebrations you have enjoyed seeing throughout his career? We would love to hear your thoughts.

Here is some insight as to how Rossi reflects on his bikes, career and the day he announced his retirement:

"I have the bikes at home except the Hondas, I have the Aprilias and Yamahas, the Yamahas are in my house. The 2004 model is in my bedroom. Every morning what I wake up I see the bike, but all together like this is a great emotion. It's a long long way if you look at the first one it's a really long time ago. And if you consider that after the last one there was another ten years... it's a long time and a great emotion. From Austria when I said it, I had a lot of great messages and support from all the other riders, now, and from the past. All my rivals, this is very good. It was great. I always imagined this Press Conference, and here in Valencia... a special place and the opposite for me, a not special place at the same time. It's strange, a strange feeling but I'll try to act normal because normally Valencia is a good moment for everyone, it means holidays start after a long season, and everyone is ready to stay at home a bit... but you always think that from Monday, it will be different. Another life. I've tried to not think a lot in this way, because I'll also continue to race, with cars as a driver in this case. But I'll try to enjoy it because for sure life when you're not a MotoGP rider anymore will change." 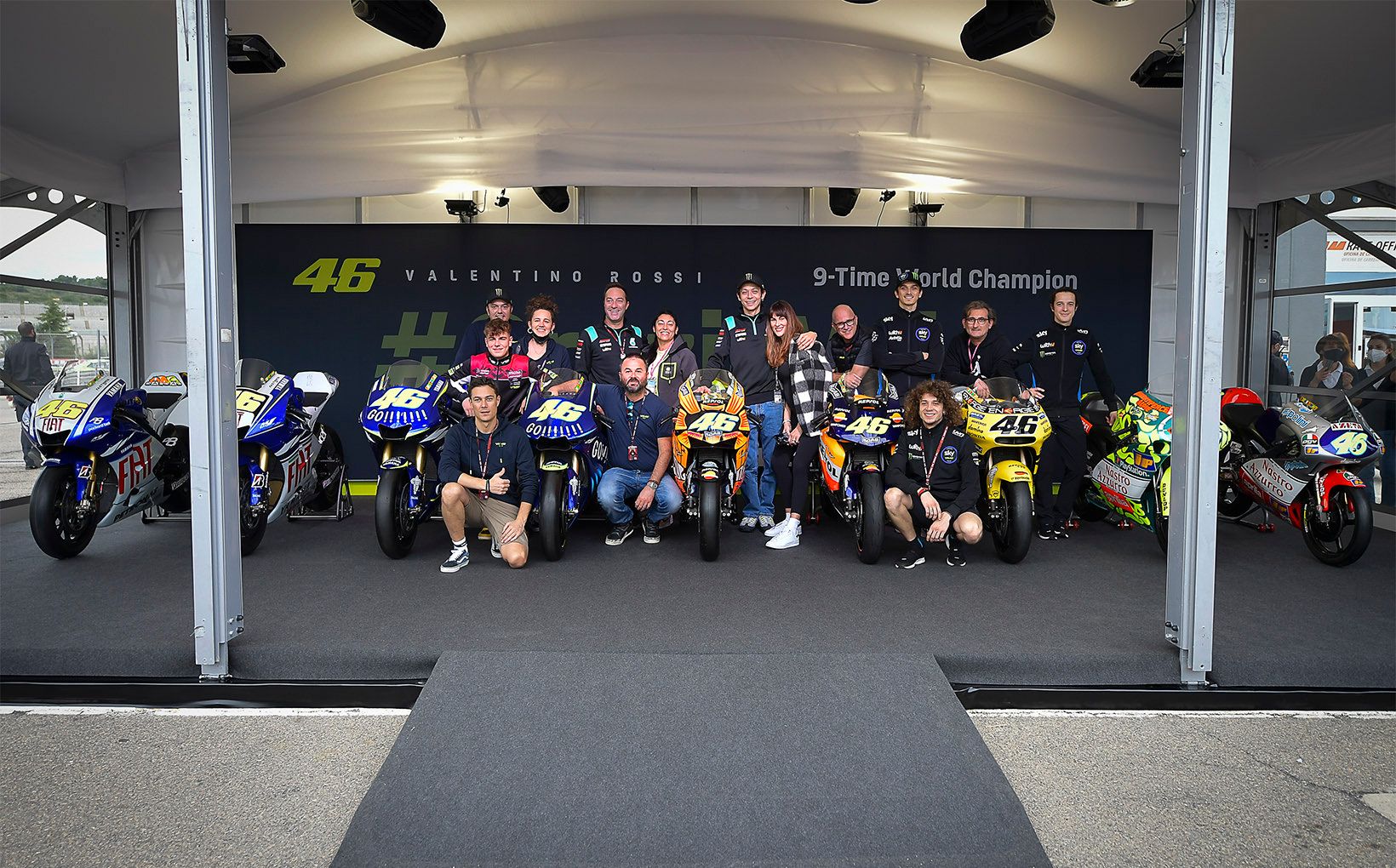 Rossi will always be forever in our hearts and there is always time to watch back some of the epic battles. Who could forget some key historic races where the riders pushed each other physically, mentally and emotionally: