Back To Back Race Wins For Fabulous Fabio, Marc Marquez Withdraws & Valentino Rossi On The Podium! 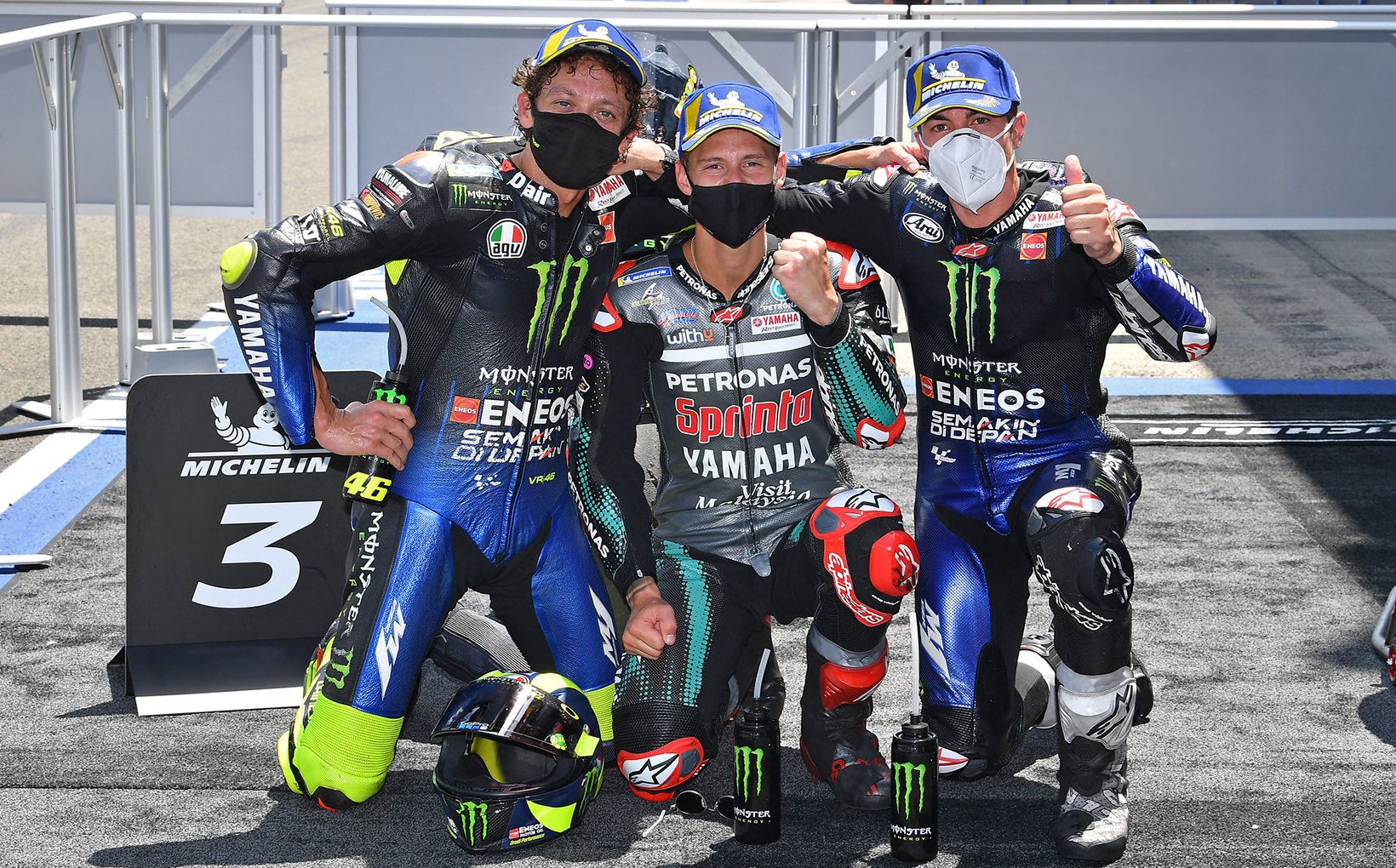 It was one of the hottest races on record and with France’s most successful premiere class rider Fabio Quartararo taking another victory at the 2020 Andalucia Grand Prix. Prior to the race start, there were fears about the soaring temperatures and how riders were physically going to be able to ride without heat exhaustion or frustration getting the better of them. Well, if you looked at Quartararo at the end of the race, you would be surprised by his level of fitness because it looked like he could go another 25 laps as opposed to Maverick Vinales and Valentino Rossi who were succumbing to the heat even though mentally strong. The key differences between the podium finishes was consistency, confidence and the ability to push even when conditions were troublesome for the front and rear tyres. The French rider did not make a mistake and extended his World Championship lead to 50 points over reigning World Champion Marc Marquez who is sitting on 0 points even after a heroic attempt to ride! Marquez passed the fitness test of 50 push ups, although the swelling and pain was too much to bear. As a result, he had to withdraw which gave Quartararo more hunger to push. 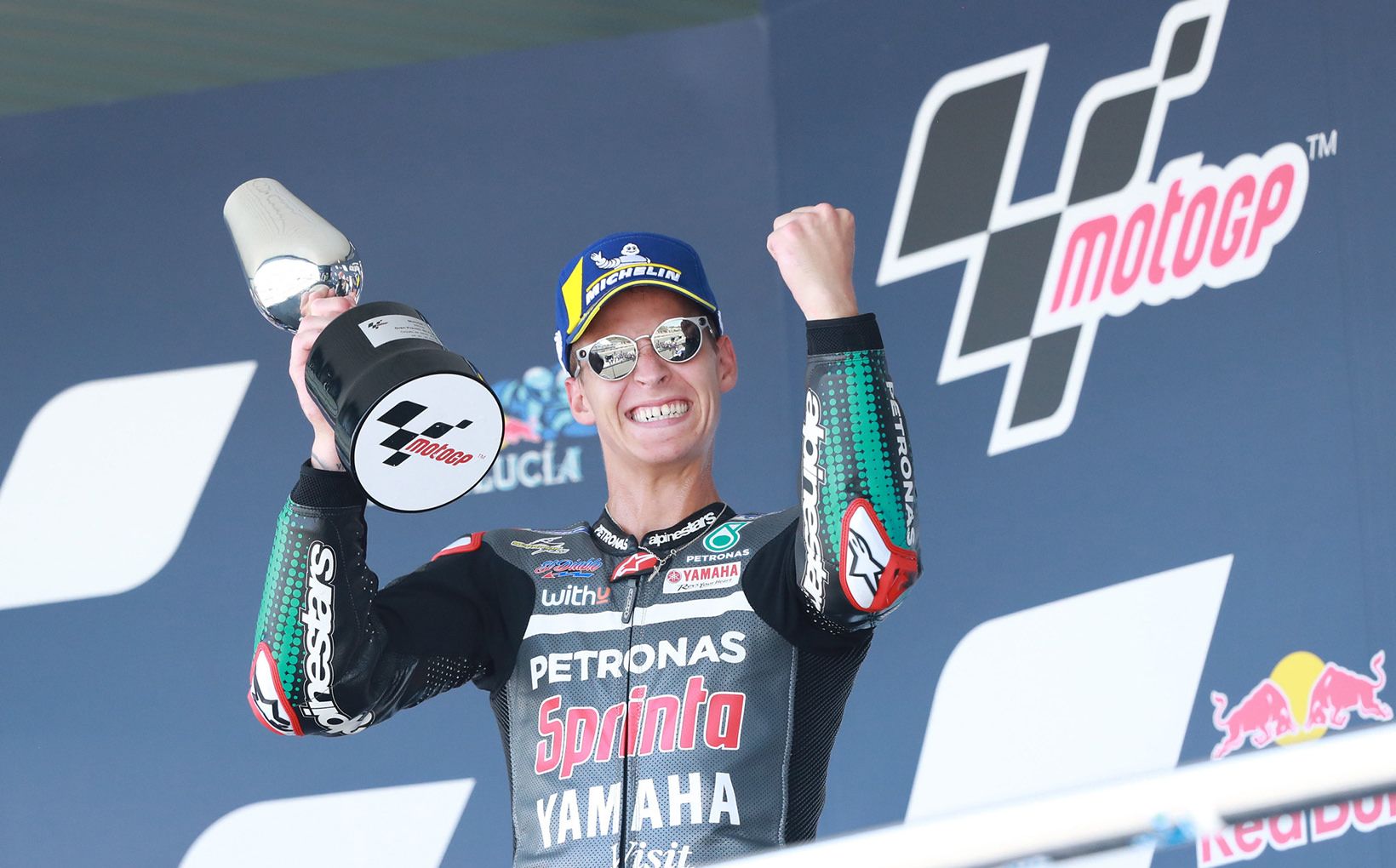 FQ20: “It was a tough race. To complete 25 laps in front in these temperatures made it the hardest race of my life! My hands and feet were so hot and there was just no air to cool you down. I felt really good on the bike though. Even though we are at the same circuit as last week, the conditions are different and we had to adapt so quickly to this. The first time I saw the gap to Valentino [Rossi] was 0.6secs, I thought that it was time to push. Then on one lap I looked back in Turn 6 and couldn’t believe the advantage that I had pulled out. At this point I knew I had to keep calm and just finish the race. I’m so happy to have another victory, especially in a race as tough as this one. It was also amazing to be on the podium with Valentino because he has been my idol for so long. I just want to say a massive thanks to my team, Yamaha, partners, my family, my friends, my manager and all the fans for their support.” 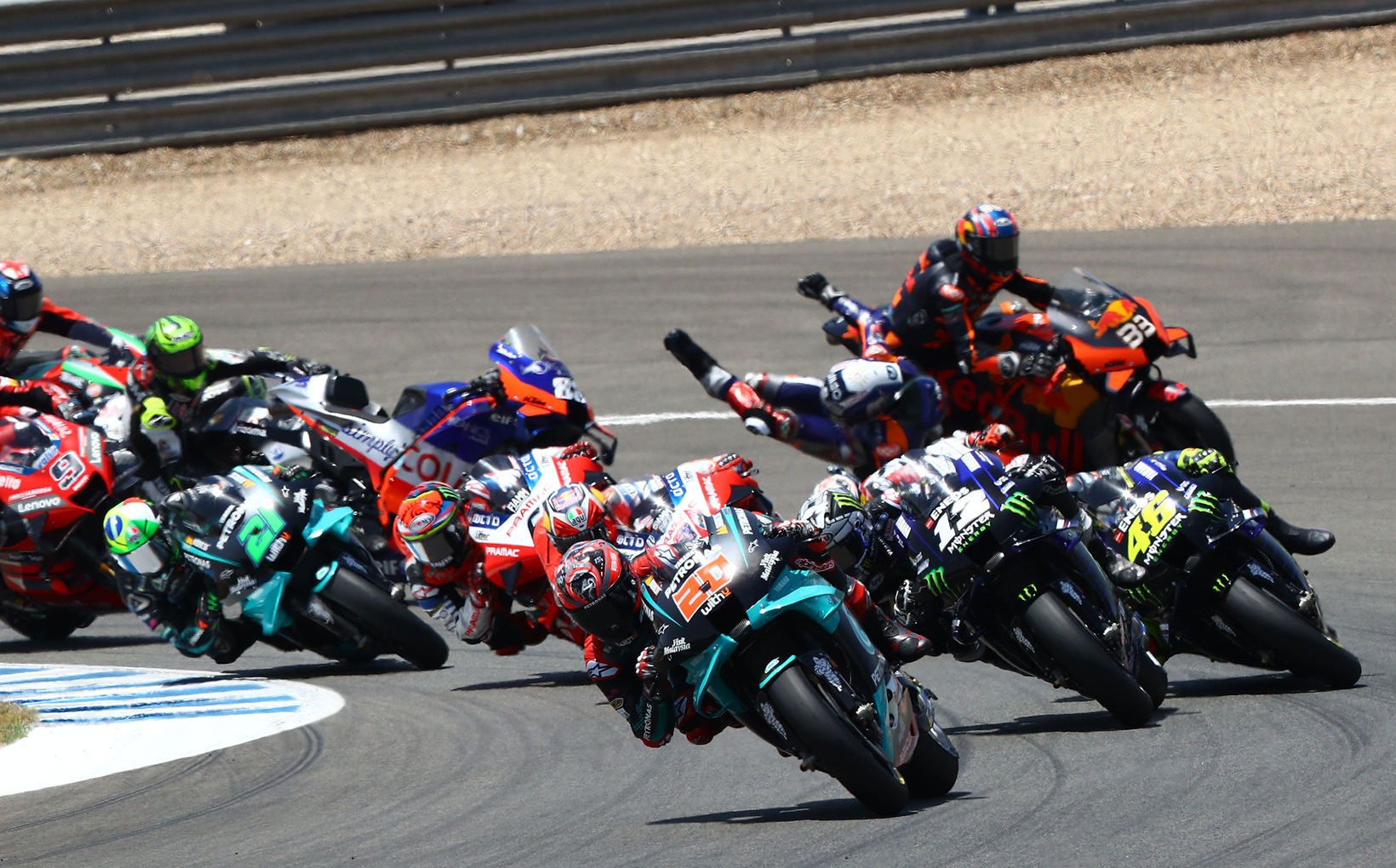 We are really impressed with the abilities of Petronas Yamaha SRT MotoGP Team. They have grown, improved, worked hard and are continuously re-defining what it means to be a satellite team behind the Yamaha factory riders. At the present moment, this team is outperforming the sister head office. The hole shot device for race start was picture perfect for Quartararo and not so great for others like Brad Binder and Miguel Oliveira who had a rough start and also ended up colliding causing Oliveira to be sent sky rocketing in to the air and landing hard on his head. Not an ideal situation to be in considering a strong qualifying session and with only one of the KTM factory riders finishing the race. It will be a lesson to learn because you work all weekend to achieve greatness and it can be over in a matter of minutes. 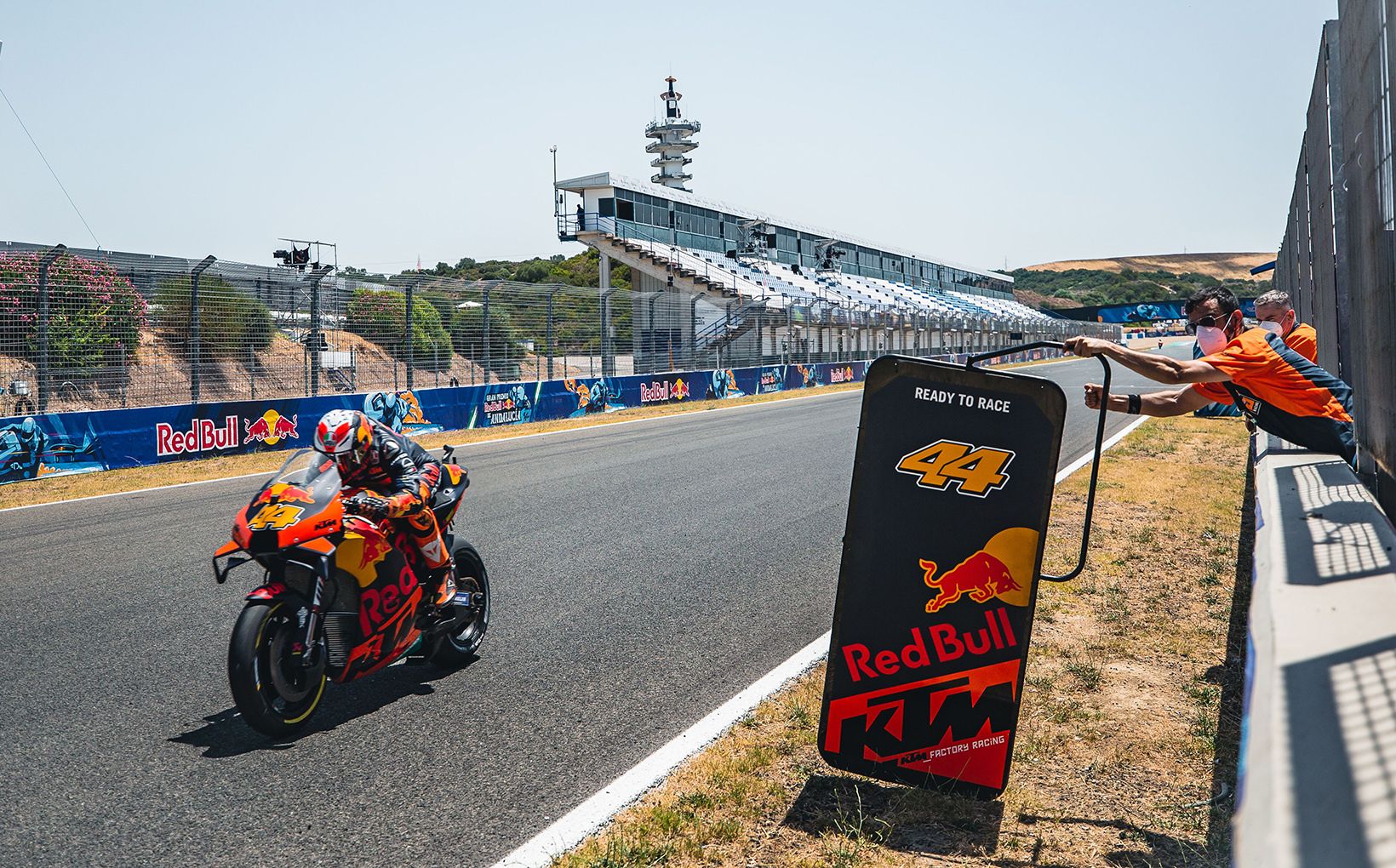 Credit - KTM MotoGP Team & Polarity Photo - Pol Espargaro KTM RC16 MotoGP 2020 Andalucia
The KTM machine is performing really well in the opinion of Pol Espargaro. PE44: “We’ve seen other manufacturers struggling but the team did great and we’ve been able to show some of the improvements that everybody in the factory has been working towards in the winter. For sure we were expecting a bit more today, but we’ve been gaining points and we’re equal fourth in the championship.” 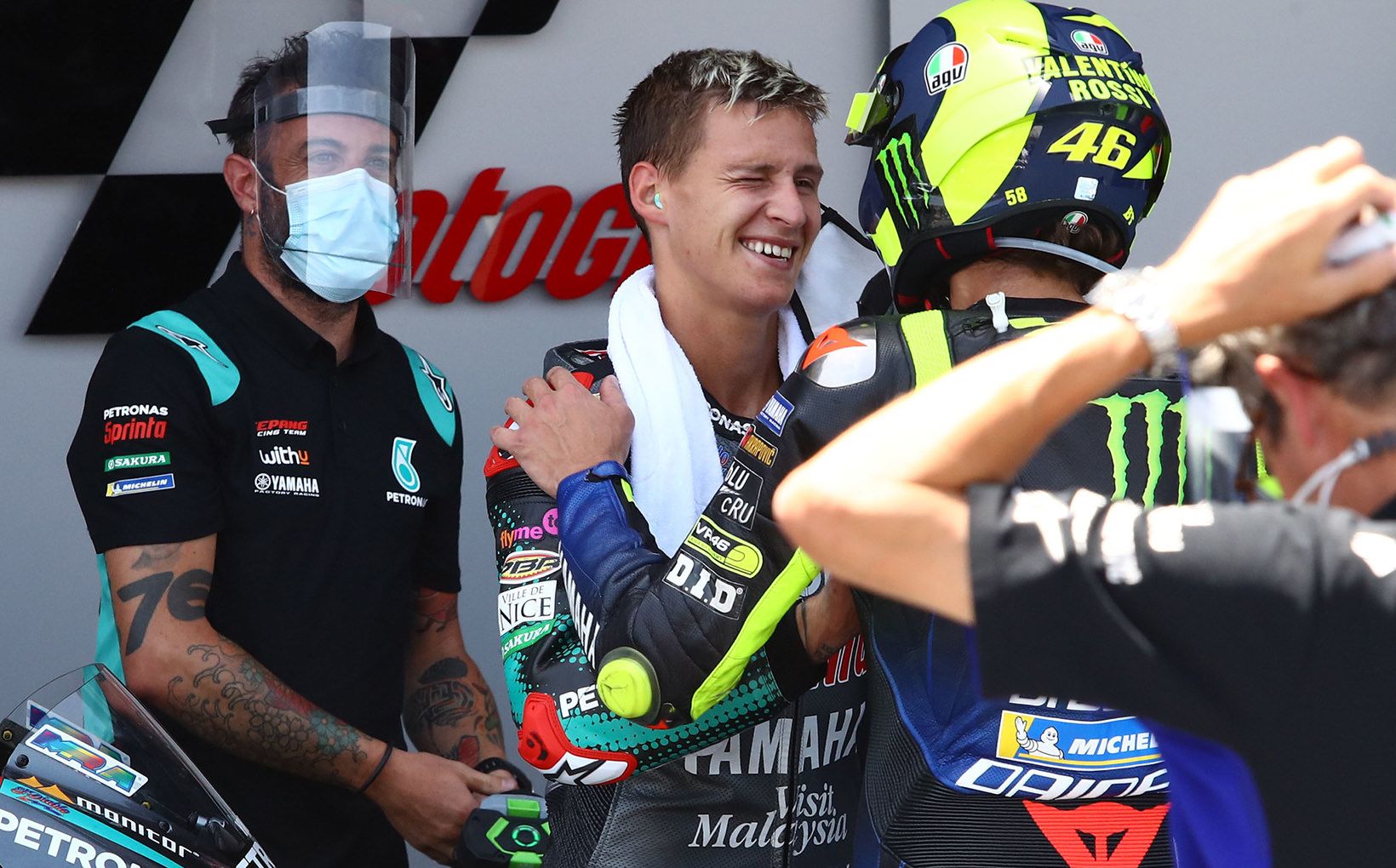 In terms of manufacturer performance it was a race dominated by Yamaha although there are concerns for their engine reliability with Rossi losing an engine last week and Franco Morbidelli losing an engine mid-way through the race which cost him a podium chance. Yamaha will need to be very careful not to utilise all of their engine capacity limits otherwise it could be costly for penalties, performance and overall success. Regardless of the engine troubles, Rossi did an impeccable job of defending his lines and almost putting Maverick Vinales into third place after the Spanish rider suffered heat exhaustion and struggling to get by the Doctor. The engine heat was so hot that Vinales almost threw the tail in and could have dropped back to the midfield. The ‘Top Gun’ rider dug deep and pushed on to finally pass Rossi close towards the end of the race and recovered some vital title points. The nine times World Champion celebrated like it was a victory and has become quite sarcastic of late with a major celebration pretending like the fans were in the crowd. He did admit it felt weird not having the crowd cheering him on and sent hugs to all the fans across the globe tuning in to watch the event. VR46: “I’m very happy because it’s been a long time since I was on the podium. We’re coming back from a bad period with bad results. So this weekend we started working in another way. I’m very happy with the work David Muñoz did, and the rest of my team also did a good job. I was able to make a good lap at the start, and after that the race was so long. But I’m happy to be back on the podium. For me it’s not quite like a victory, but it’s similar.” This stepping stone will allow Rossi to gain more confidence with his team and also enjoy the sport again because it has been a frustrating couple of years. The growth and development is proving to be worthwhile and at forty one years of age, Rossi is not going anywhere with the hunger to perform. 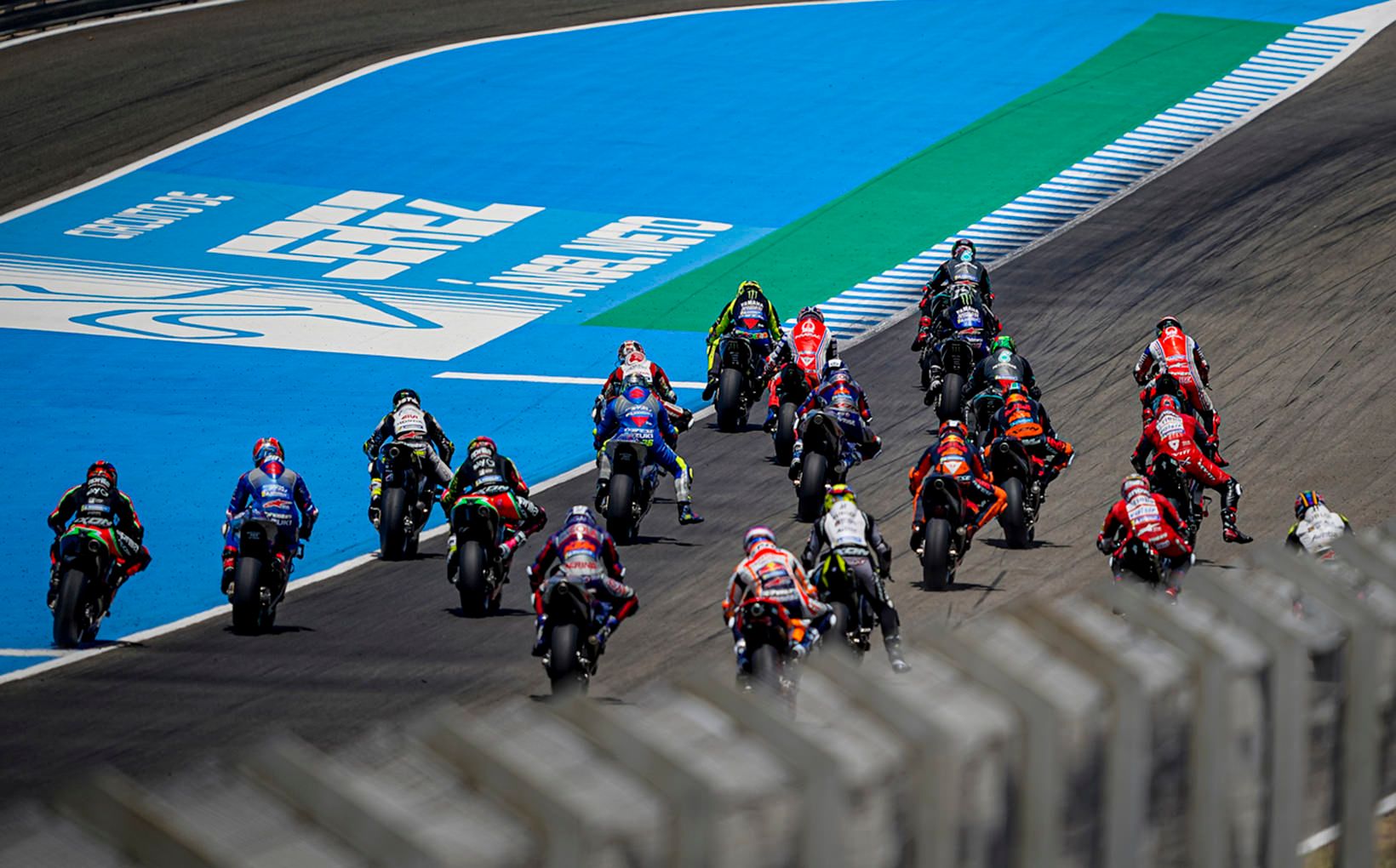 Meanwhile, on the other side of the garage, Vinales was upset and angry because he had the pace to tackle Quartararo and never did. He felt like it was impossible to breathe. MV12: “Actually, in this race it was impossible to breathe. First of all, in the first lap I tried to overtake Fabio to get the clear track, because I felt very strong with the bike, but then I went wide and Fabio and Vale overtook me. Then I was stuck behind Vale, and I couldn’t breathe most of the laps, I was destroyed. I don’t know why, maybe because of the heat coming from the other bikes, but I couldn’t do more. I was saving something for the last five laps, and I pushed at the end when I had a good rhythm again. I mean, today I lost it in the first lap, if not it would have been a much better race.” One mistake in this 2020 season can be so costly and Vinales is learning about that first hand time and time again. He will need to sort his starts and first few lap strategies in order to improve and keep chasing the magic Frenchman. 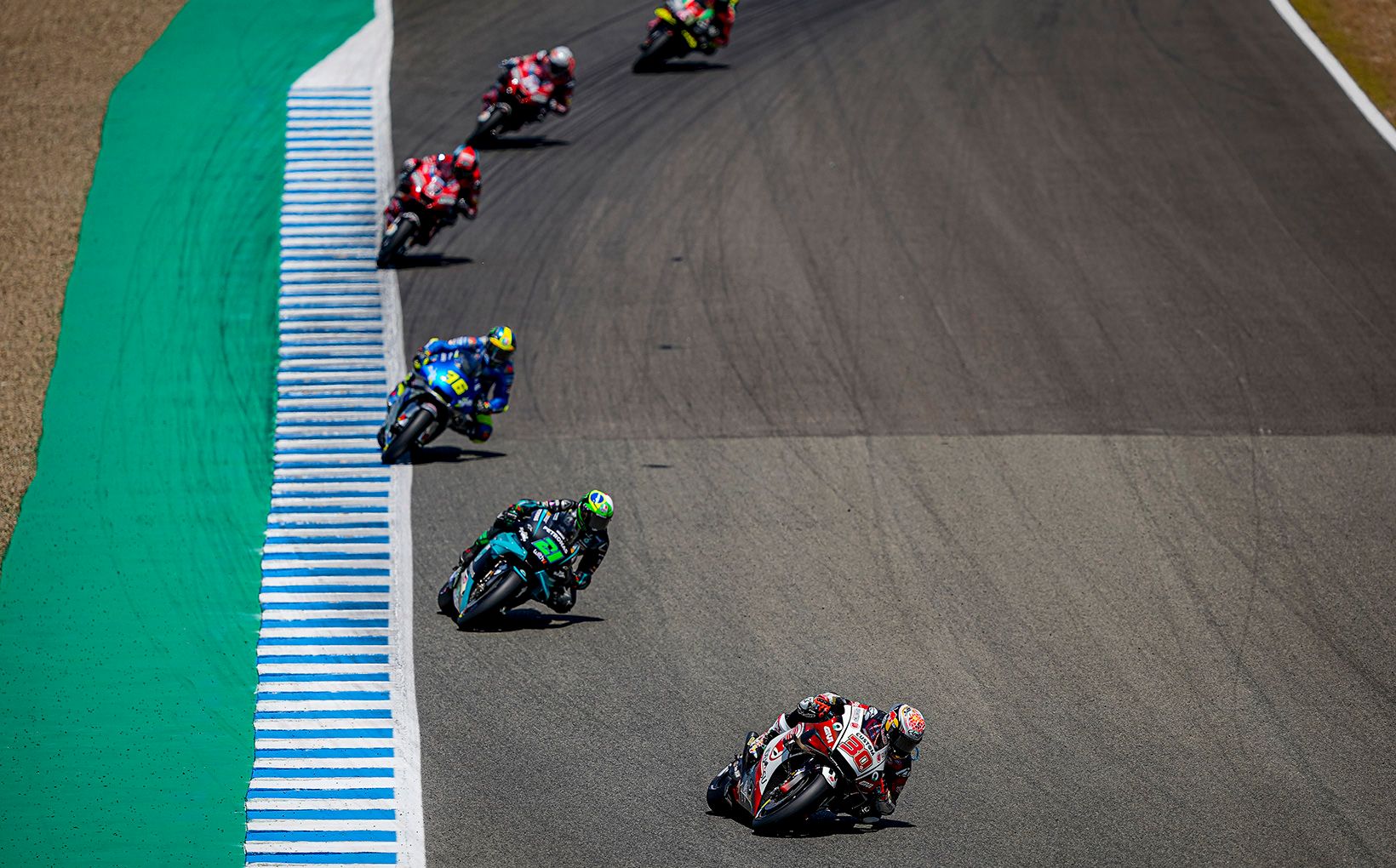 Flipping to Ducati, Honda and Suzuki, it was a mixed bag of results. For some it was very positive, others it was heartbreaking and a sensational effort by those injured including Alex Rins and Cal Crtuchlow who finished the race and put in quality lap times considering their wounds. Takaaki Nakagami was so close to a podium finish after riding a superb race as the leading Honda rider. The pressure was on to stay upright and he did a wonderful job for the team plus teammate Crutchlow working hard even though his wrist was painful forcing him to enter the pits then restart his lap rhythm. We have major respect for this riders in such tormenting conditions. TN30: “We were so close to the podium, I think to Valentino (Rossi) and the podium it was just five tenths, but I’m still pretty happy. For all 25 laps of the race I gave my full potential, the bike felt really good and for all the race we were fighting close to the podium. It was difficult and I really struggled to find grip, but it was the same for everyone. The team did a really great job all weekend and the bike improved a lot from last weekend. I hope we can keep going in this direction, we have a few days to rest and then we go on to Brno and hopefully we can get a podium as soon as possible.” 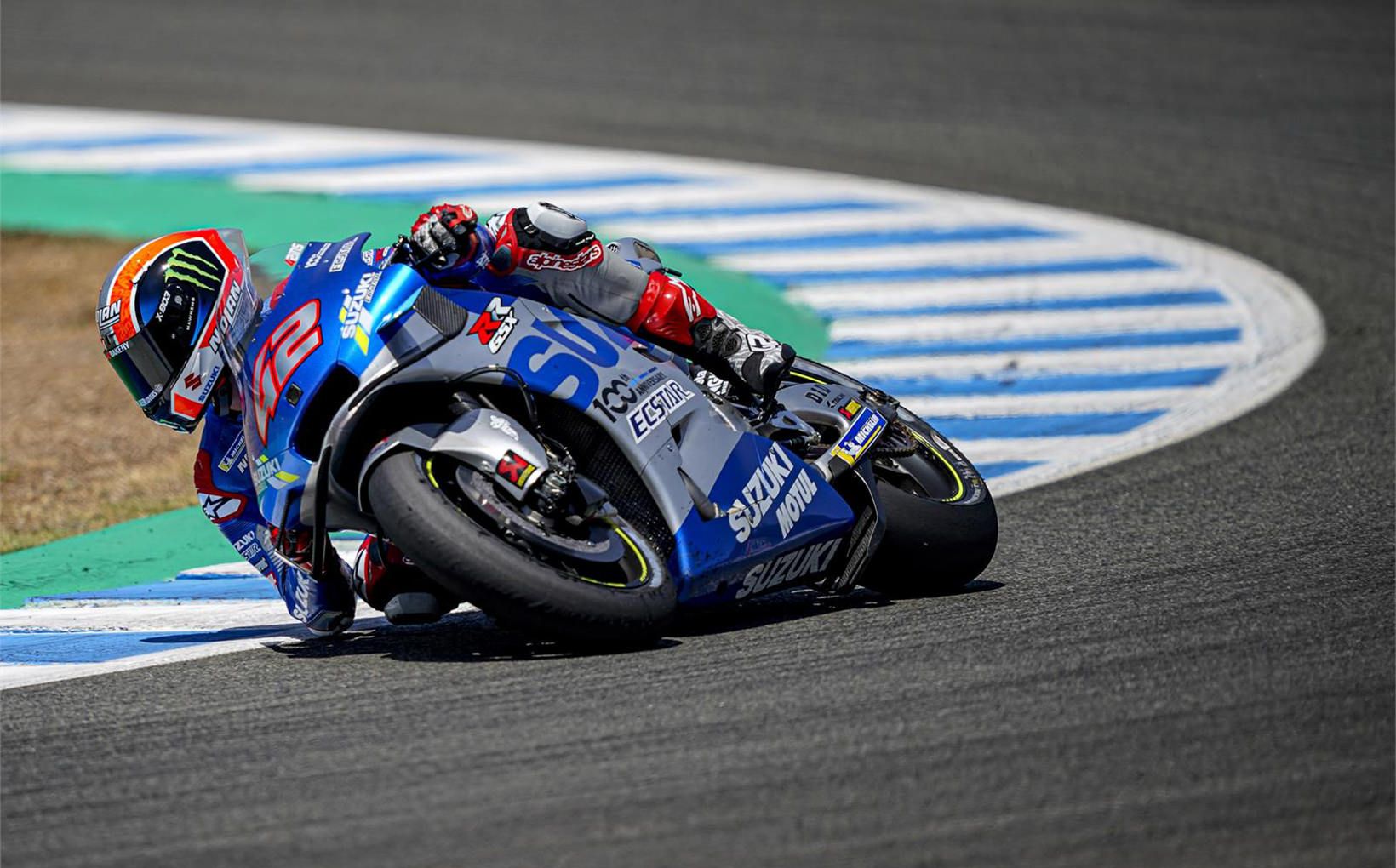 The fact a rider can push a motorcycle around the circuit at speed without being at 100% fitness in sixty three degree heat on circuit is remarkable. Rins is a talented young rider and has just been subject to bad luck. The fact he even raced on Sunday was pure dedication to his craft. AR42: “The race was unbelievable; I was already suffering from the moment I joined the grid before the start. I got an incredible start but as the laps went on I started to feel more and more pain. With seven laps to go, it was really tough to continue; but after all the work that I’ve done since last weekend, as well as the doctors and my team, I just wanted to keep going. I never lost my faith and it allowed me to take this 10th place. I’ll continue with my recovery and hope to be on much better form for Brno.” The recovery time to Brno will definitely help and be a blessing for fellow rider Marc Marquez. 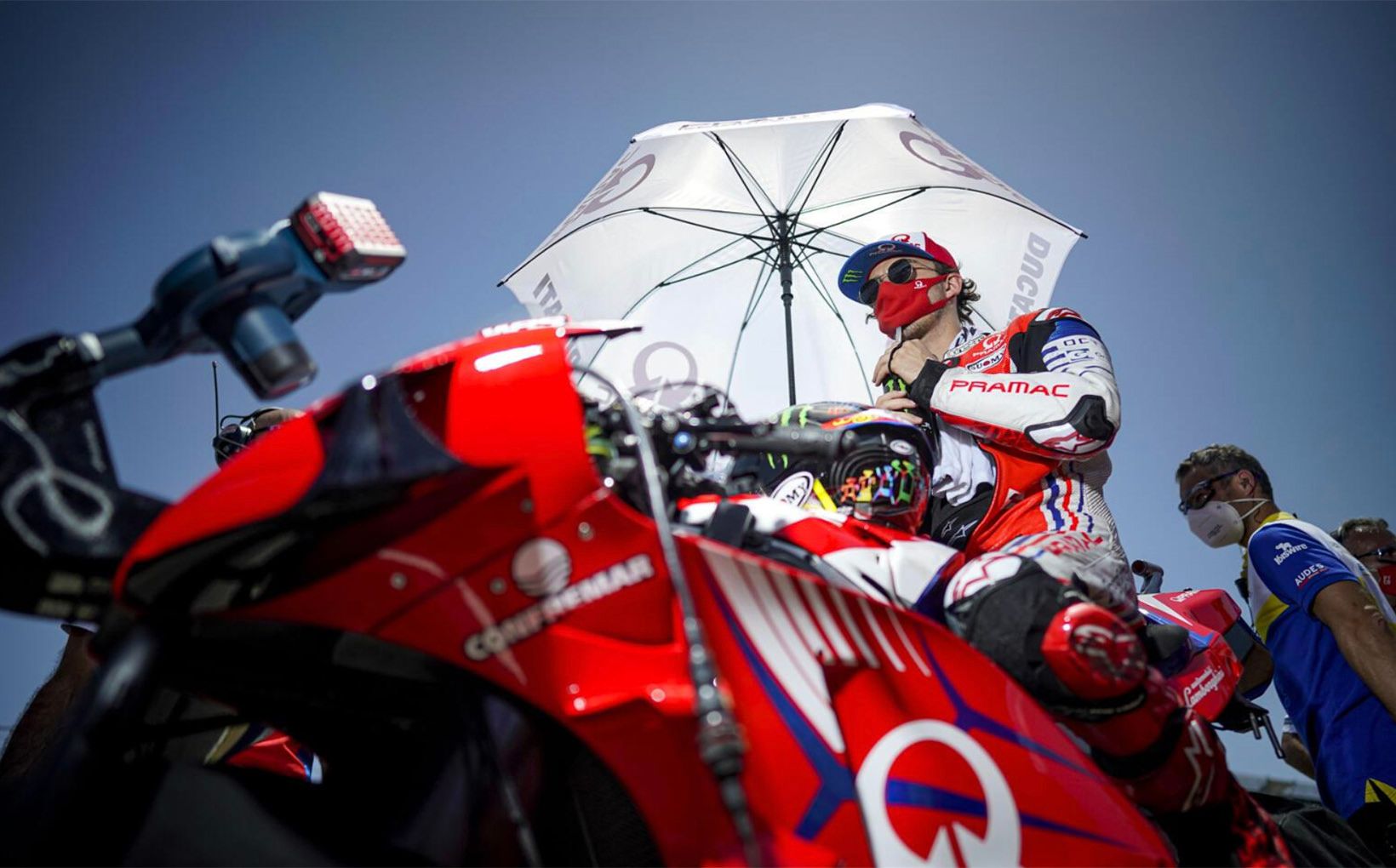 Two of the most unlucky riders of the weekend were Jack Miller and Francesco Bagnaia. Both Pramac Ducati teammates failed to finish the race with Miller crashing as a result of the front end going due to lack of grip and torment for Bagnaia who was in second, looking to keep that podium and be the first one of his MotoGP career when a technical problem stopped his dream from coming true. Talk about pure frustration and a terrible way to be denied a podium result. Something so close yet so far! PB63: “I can’t complain after a weekend like this. We worked really well, we were fast and really competitive. Unfortunately a technical problem didn’t allow us to finish the race but we will arrive to Brno more stronger than ever.” 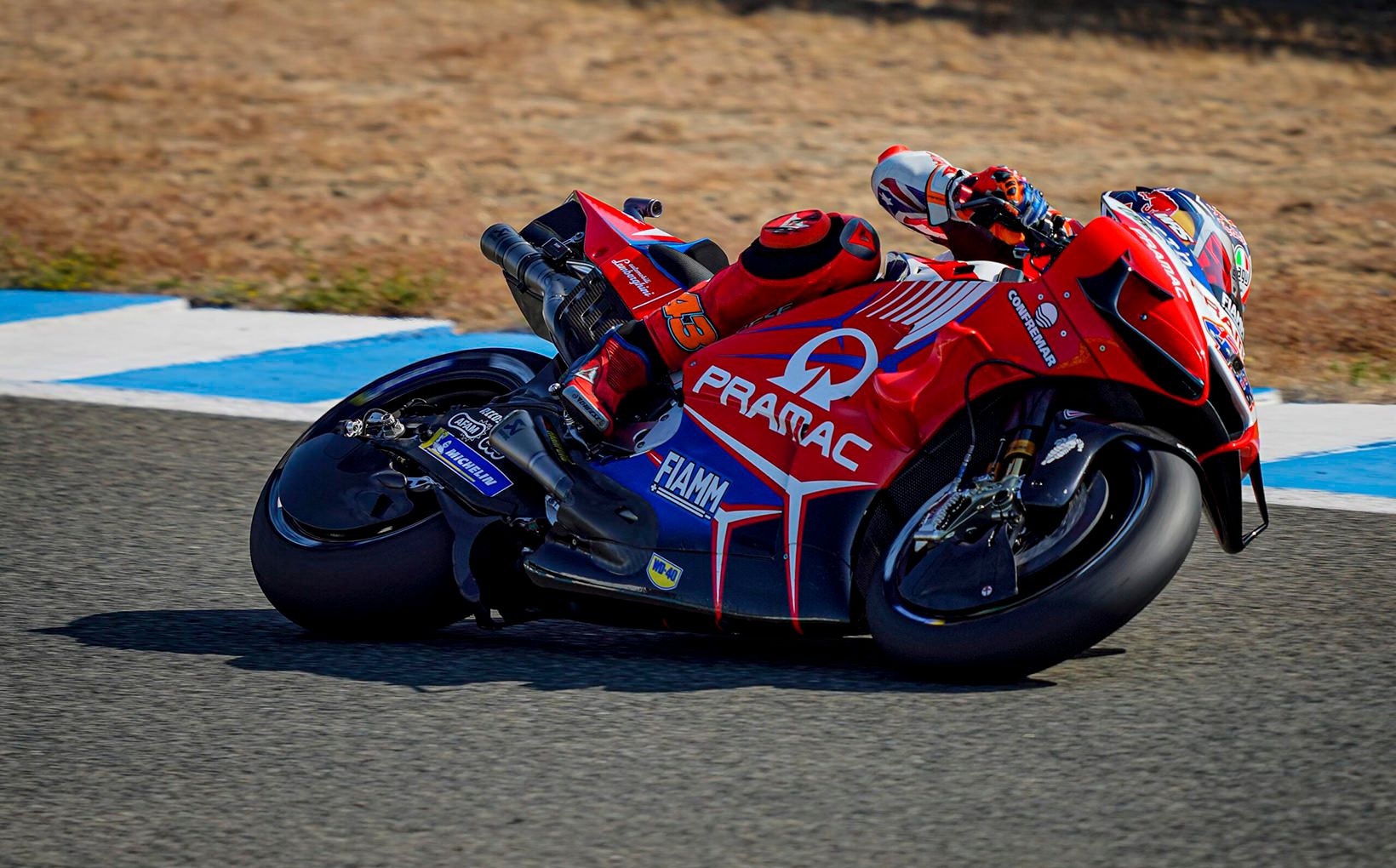 JM43: “I had problems overtaking the Yamaha, I tried to overtake Vinales when it wasn’t so fast and when I finally did, I had to push hard and unfortunately, I lost grip and I crashed. I can’t complain, I made a mistake, but we will come back to Brno stronger.” Both of the Pramac riders are performing far superior to the sister Ducati factory team and now it is important that they finish and achieve podiums because 2020 is a season where anything is possible.

The gruelling Gran Premio Red Bull de Andalucía is another reminder of why we appreciate these athletes pushing limits and really showcasing why they are at the top of their sports crafts. With Brno up next, do you think Quartararo is on a run like Marquez in the past and will keep demolishing the field?