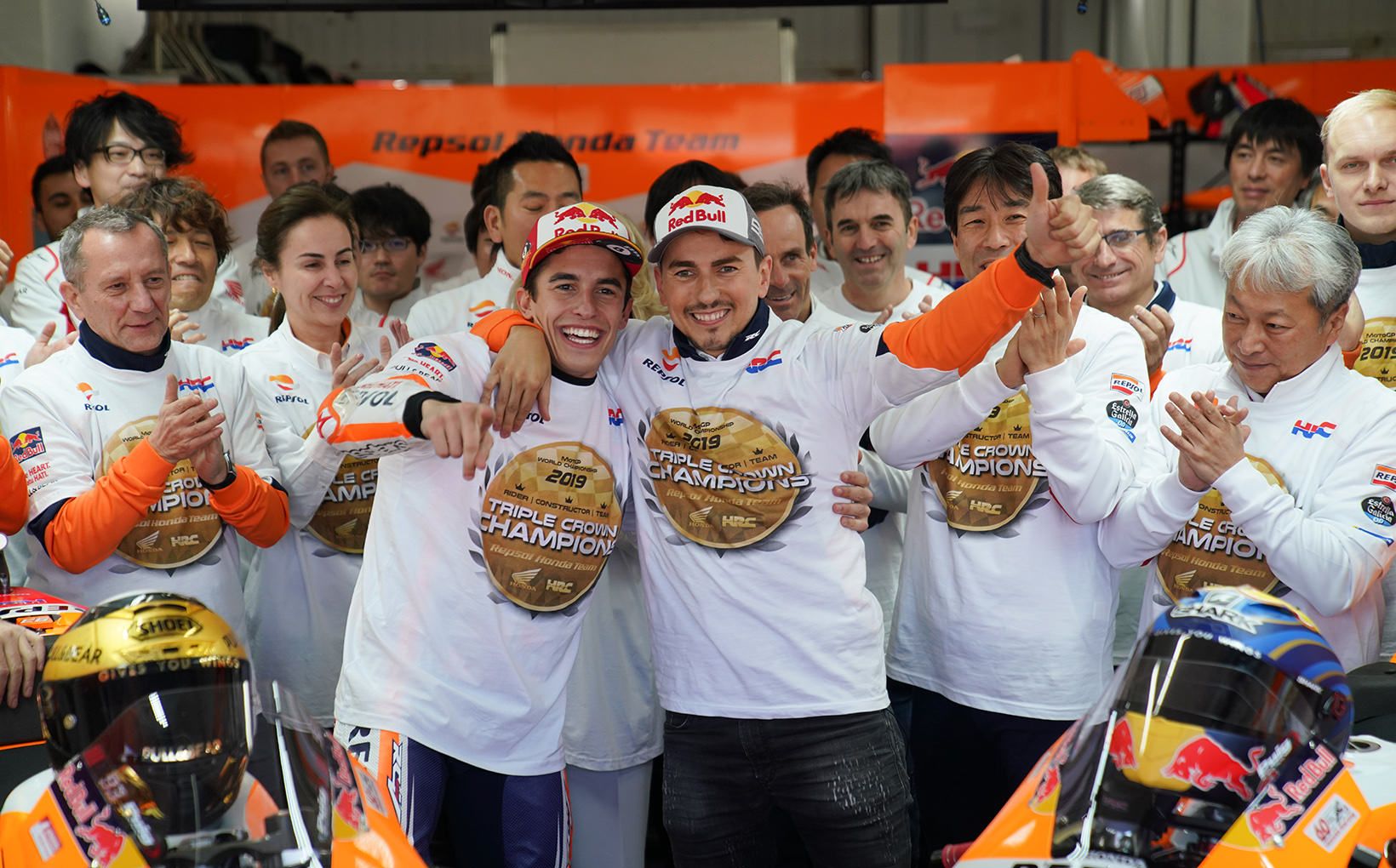 The 2019 season is complete with Marc Marquez taking out the final victory of the season ahead of Fabio Quartararo and Jack Miller. It really was the perfect end for Jorge Lorenzo to say goodbye to the sport he loves and achieve the “Triple Crown” with his teammate Marquez.

It was an emotional goodbye for a lot of people involved in the MotoGP paddock whilst also being a sign of relief for the multiple World Champion who is in the history books as one of the greatest in the sport of motorcycle racing. It was no surprise that Marquez would not allow Quartararo to win in 2019 because the dynamic superstar wanted a record of almost a clean first and second finish all round. Spectacular is one way to describe Marquez 2019 season results. The race was not shy of Quartararo having a go and trying to beat his rival, it was an indicator of what is to come that is for sure because as one leaves the sport, another one has to step up to the plate. If you were to rate the season for the Spanish Ant, you would say it is almost perfect.

It will be very hard to top the 2019 success and no doubt there will be a continued domination by him as he showcases new limits of the sport. On the cards looking to shaking things up besides the French rookie are Miller, Maverick Vinales and Andrea Dovizioso to name a few with the ever presence of Valentino Rossi there if he can work with Yamaha to create a better bike package. 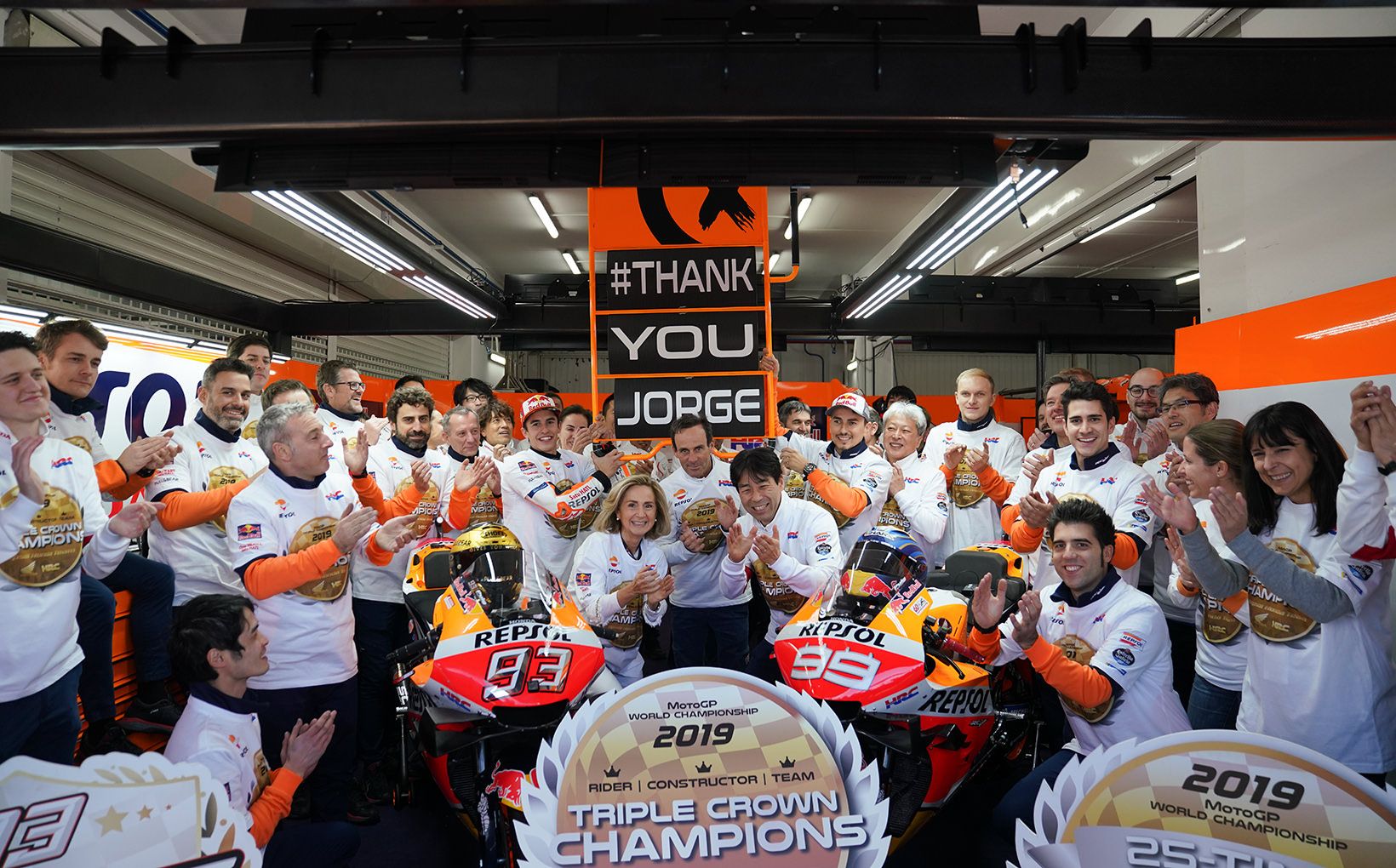 JL99: “Today was a special day. On the grid I had a very different feeling to all my other races and certainly in the opening laps I was more cautious than other races because the conditions were very difficult and I wanted to finish my last race. I focused mostly on myself in the race and I am pleased to end with some points certainly. It is great to help the Repsol Honda Team win the Teams Championship after an unbelievable season from Marc. I want to say thank you to all of Honda as they have treated me with the utmost respect and professionalism. I wish them all the best for the future.” 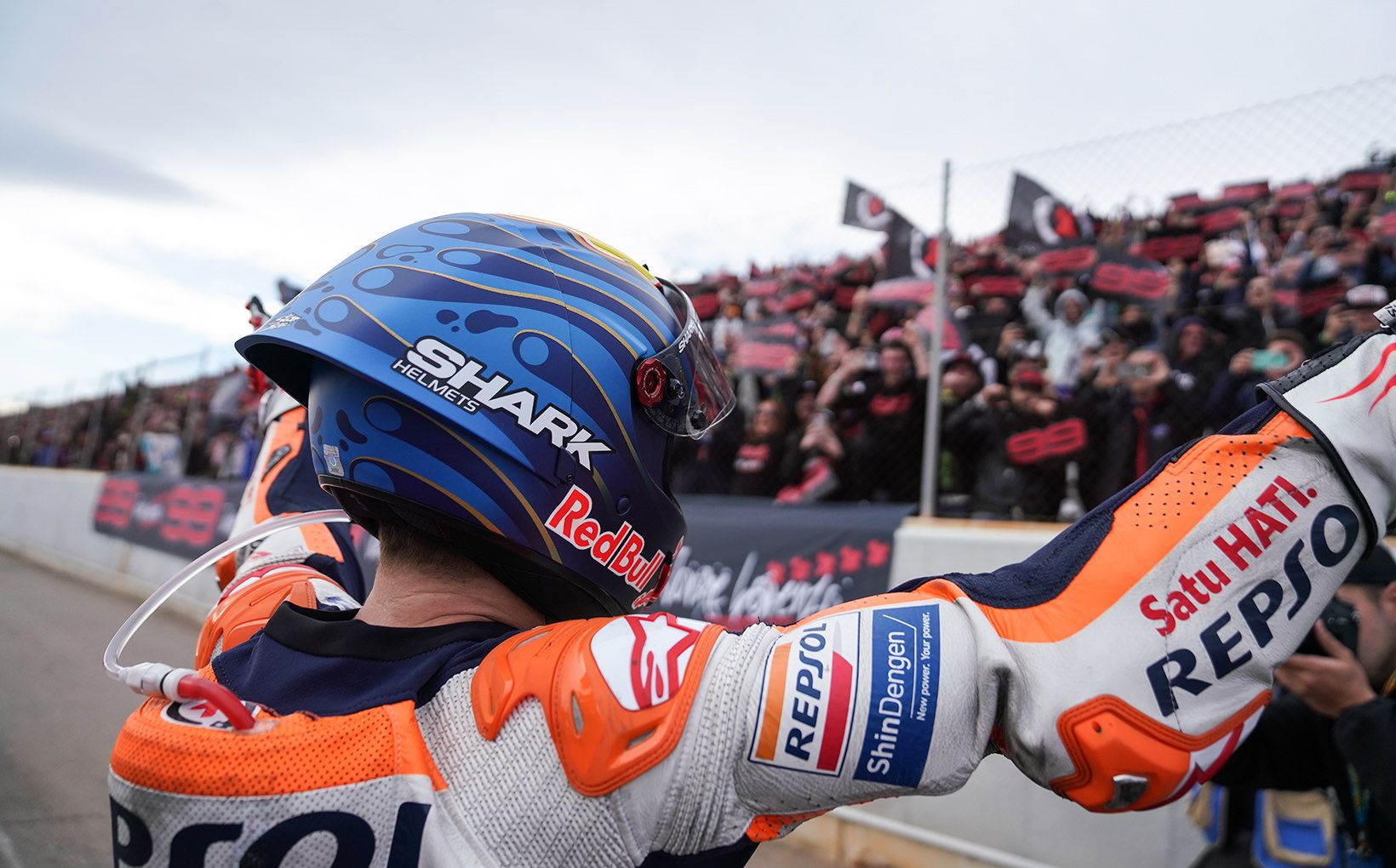 MM93: “A perfect end to a perfect season with the victory! I put a little extra pressure on myself with the gold helmet, so I needed to be extra smart! We did exactly what we wanted to do and won the Team Championship, taking the Triple Crown in this amazing season. Always the Riders Championship is the first objective, but I was happy to help win the Team Championship, not just for them but also for Jorge who has been a great champion, a hard rival and a great teammate. It will be difficult to improve on this year because we rode in a perfect way.” 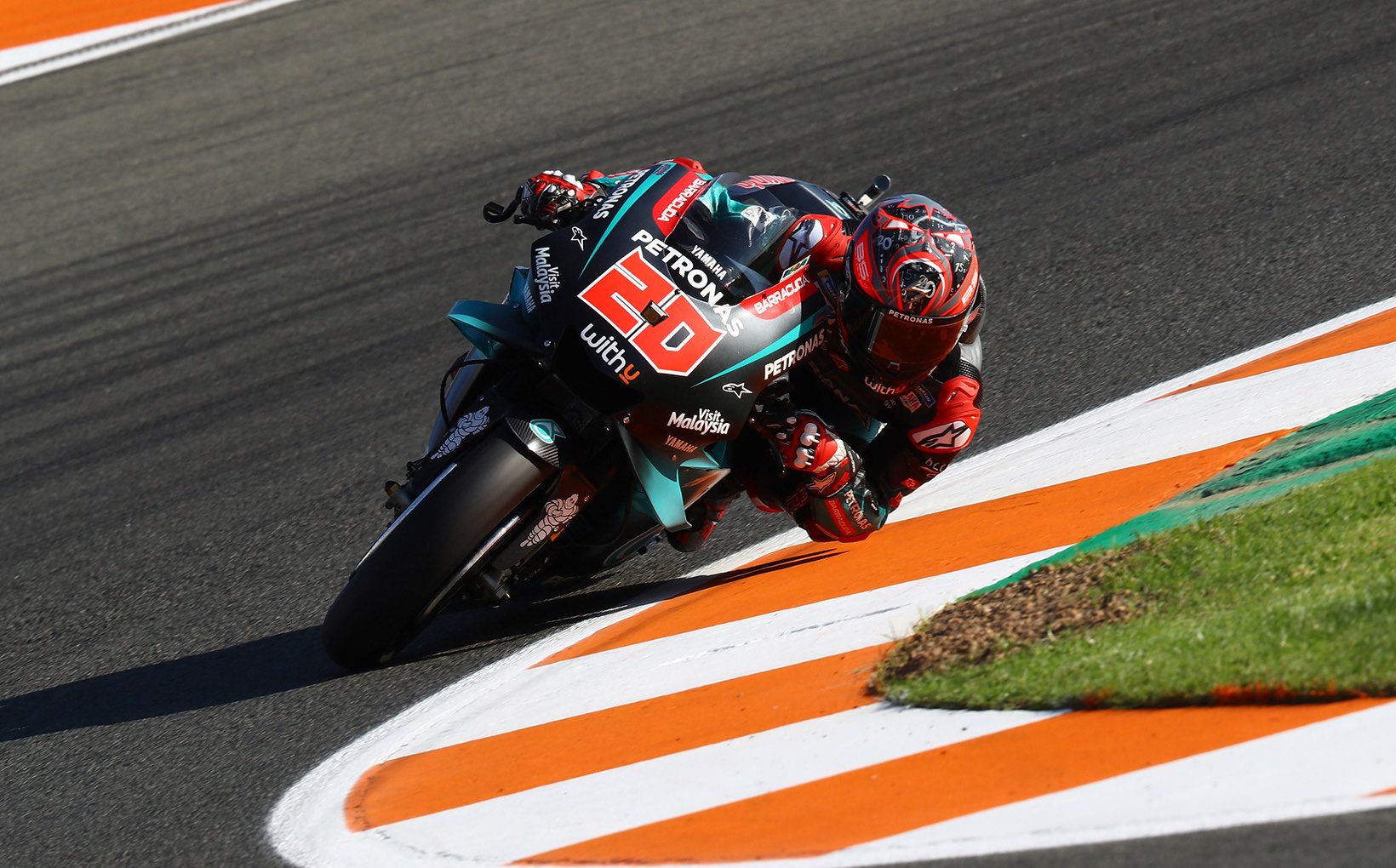 In 2019, Quartararo has been a standout. The result at Valencia allows the French star to add to his CV “Independent Riders’ Champion” as well as “Rookie Of The Year” which is sensational in a debut season with a new team. The working relationship is one of respect and with the 2020 season getting underway very soon with testing, Quartararo will have his eye on one thing and that being the ability to beat Marquez fair and square on track.

FQ20: “I knew yesterday that Marc was going to be really strong, but if we couldn’t win then I would have been happy with second - and being the first Yamaha is a nice bonus too. We weren’t so far from the victory, so I can be very proud of the result. It’s an amazing end to the season. In 2018, a lot of people told me that I didn’t deserve a seat in MotoGP and that I wasn’t ready for it - but I think now with seven podiums and six pole positions I can show them they were wrong! I’m so happy with the entire year and it’s something the whole team should be proud of.” When he sits back and reflects upon the years calendar of races, Quartararo will learn more and also study his rivals closely. We know for a fact that the hunger within his gut is there and the fire raging to keep pushing limits, growing and excelling. The sport of MotoGP has needed a new star to rustle some feathers! 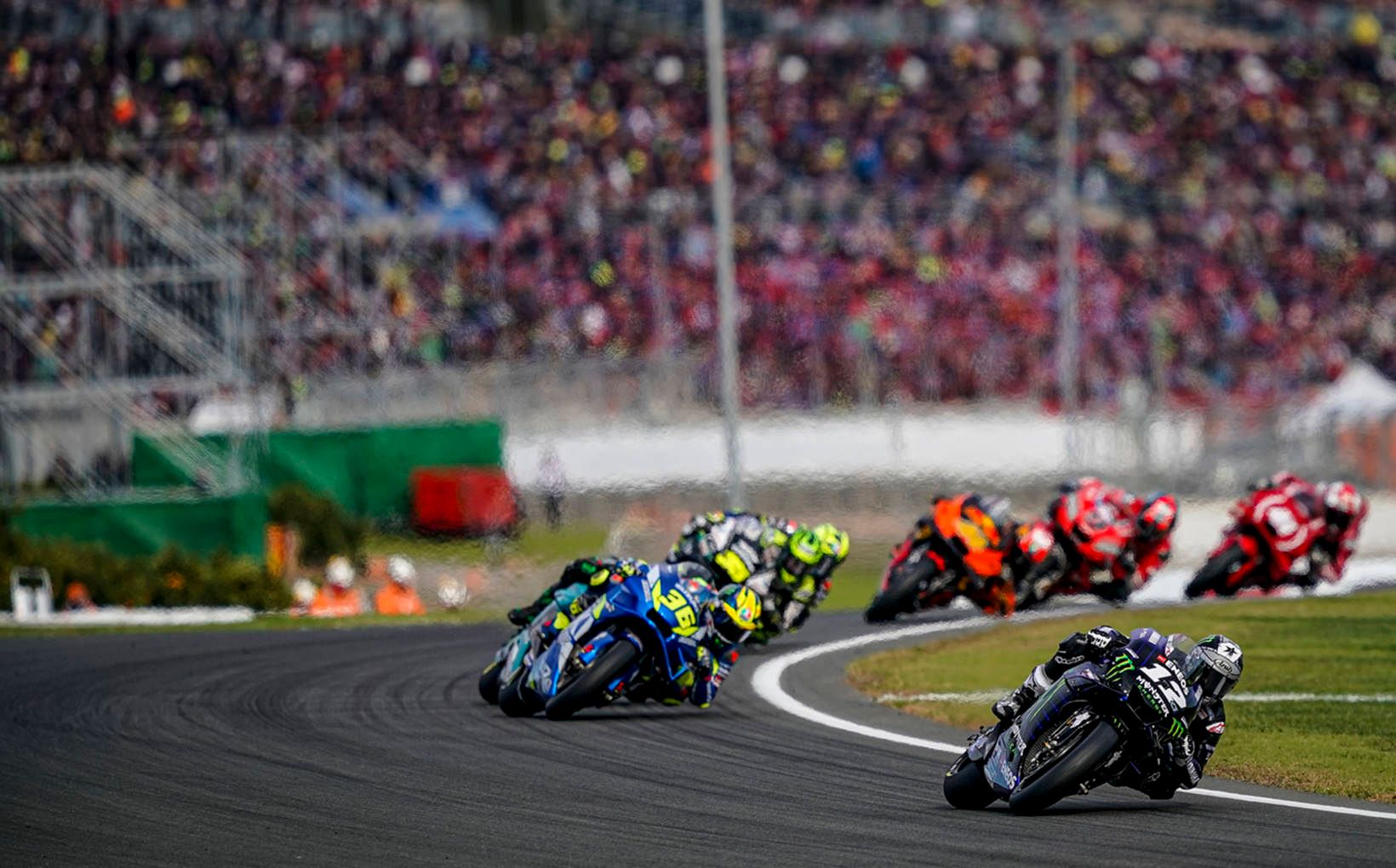 The other competitor who is looking to race in 2020 with a completely new mindset is Vinales who in the second half of the season just completed found his feet. Vinales was like a new rider, someone with confidence again and also working through issues as opposed to vocalising them to the media. It is a nice change and one that will assist in his growing as an athlete and professional MotoGP rider.

MV12: “Actually, my main objective was to try to be third in the championship. We did it today, we forgot a bit about being on the podium or winning. My objective was to finish the race well. It was a difficult race, I struggled a lot with the rear grip, which happens sometimes for us and today again, so we have to check that. Today I was very concentrated on finishing close to Rins and trying to get the maximum points. I'm very pleased to be the first Yamaha and to be inside the top 3 again. I can't wait to test the new bike. We face this new test season with a lot of motivation, a lot of enthusiasm, and that is the most important. We have very important tests coming up here and in Jerez, and I feel great on the bike. So, we need to create a good atmosphere again and keep challenging, because I think with Yamaha we can do a really good job this winter and prepare for next year.” 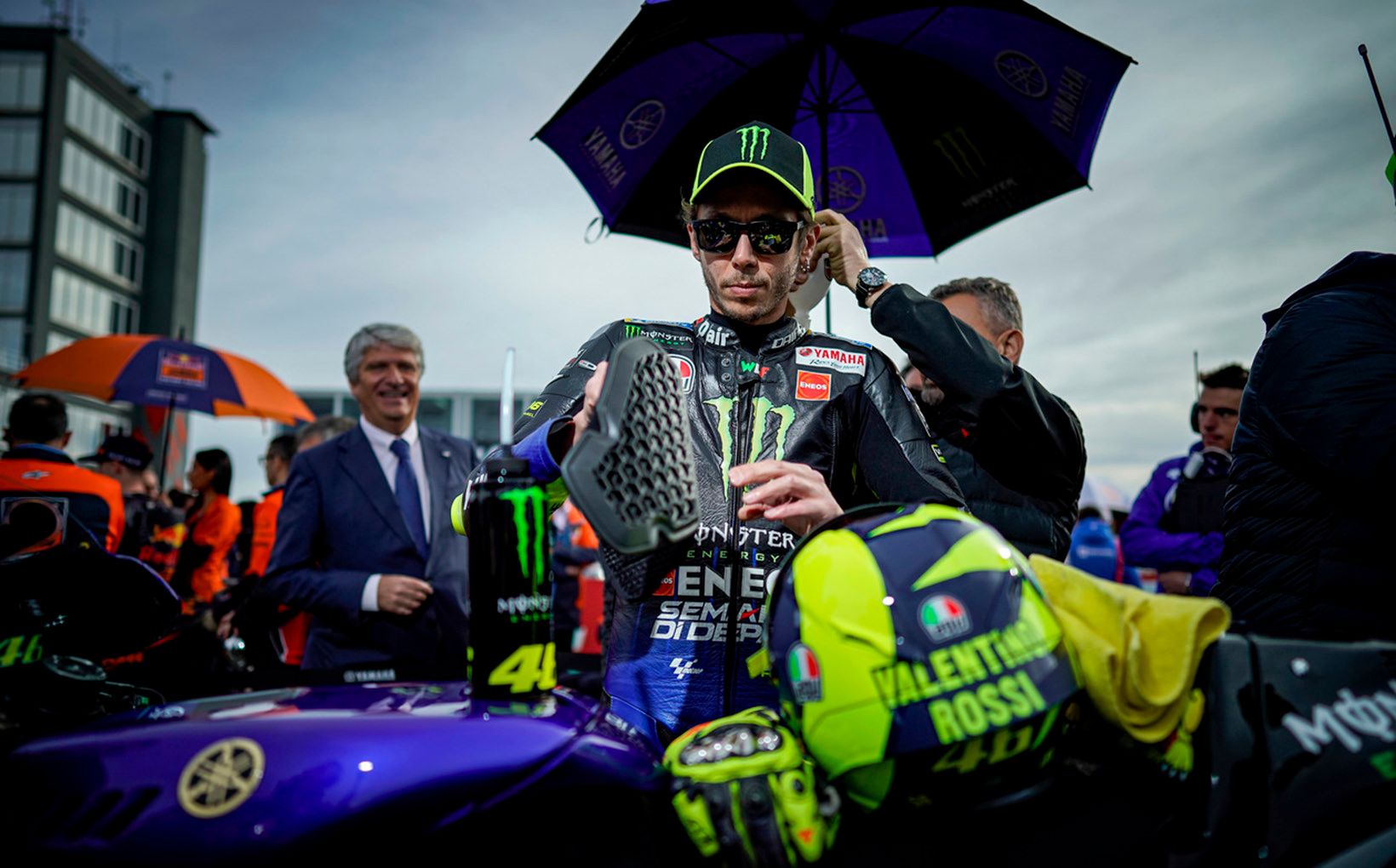 Within the Yamaha squad, they need a leader as Rossi struggles with grip which has been an ongoing issue for the year. With a lack of performance, Rossi was not able to push and had to hold back. He is looking forward to starting fresh with his new Crew Chief and testing to find new positive aspects. 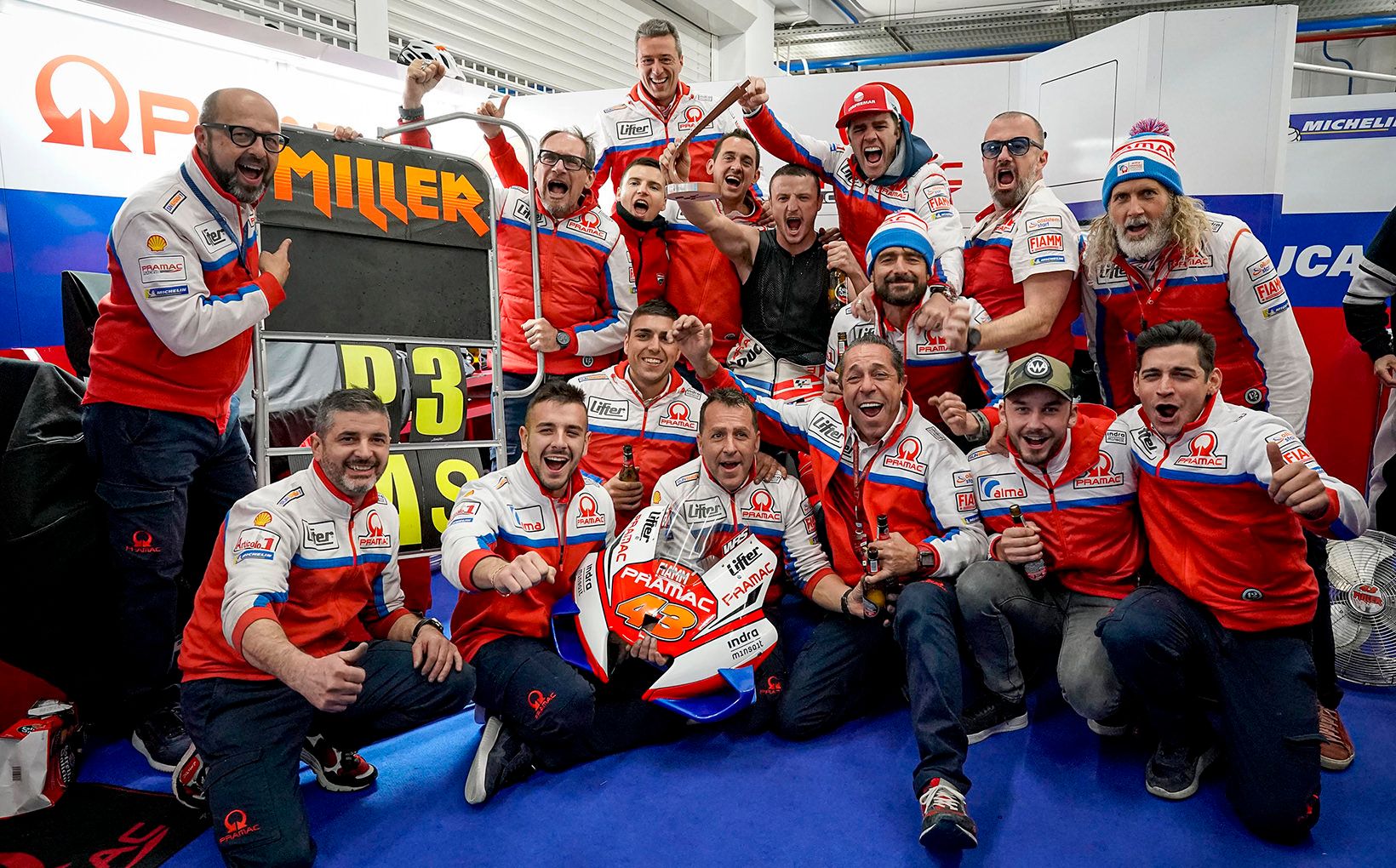 Overall, it was a brilliant season for Jackass Miller. The extraordinary podium finish cements the reason why Ducati has been supporting the Australian rider because it has been one of his best seasons to date.

JM43: “This weekend really caps off what I’ve been pushing so hard to accomplish this year, from the first session to the last putting in the work with the Pramac Racing boys and today we really showed how important that is with this result. Another memorable weekend and year!” As the Miller power grows, so will the chances of a Ducati World Championship with rumours swirling that next in line for the top factory seat is the Australian rider. There were even thoughts about removing Danilo Petrucci and moving Miller up. These talks have subsided and now the focus shifts to testing with the Honda factory seat still up for grabs: Cal Crutchlow, Alex Marquez and Johann Zarco with a 90% sway in favour of the other Marquez brother. It is just perfect timing with the departure of JL99. 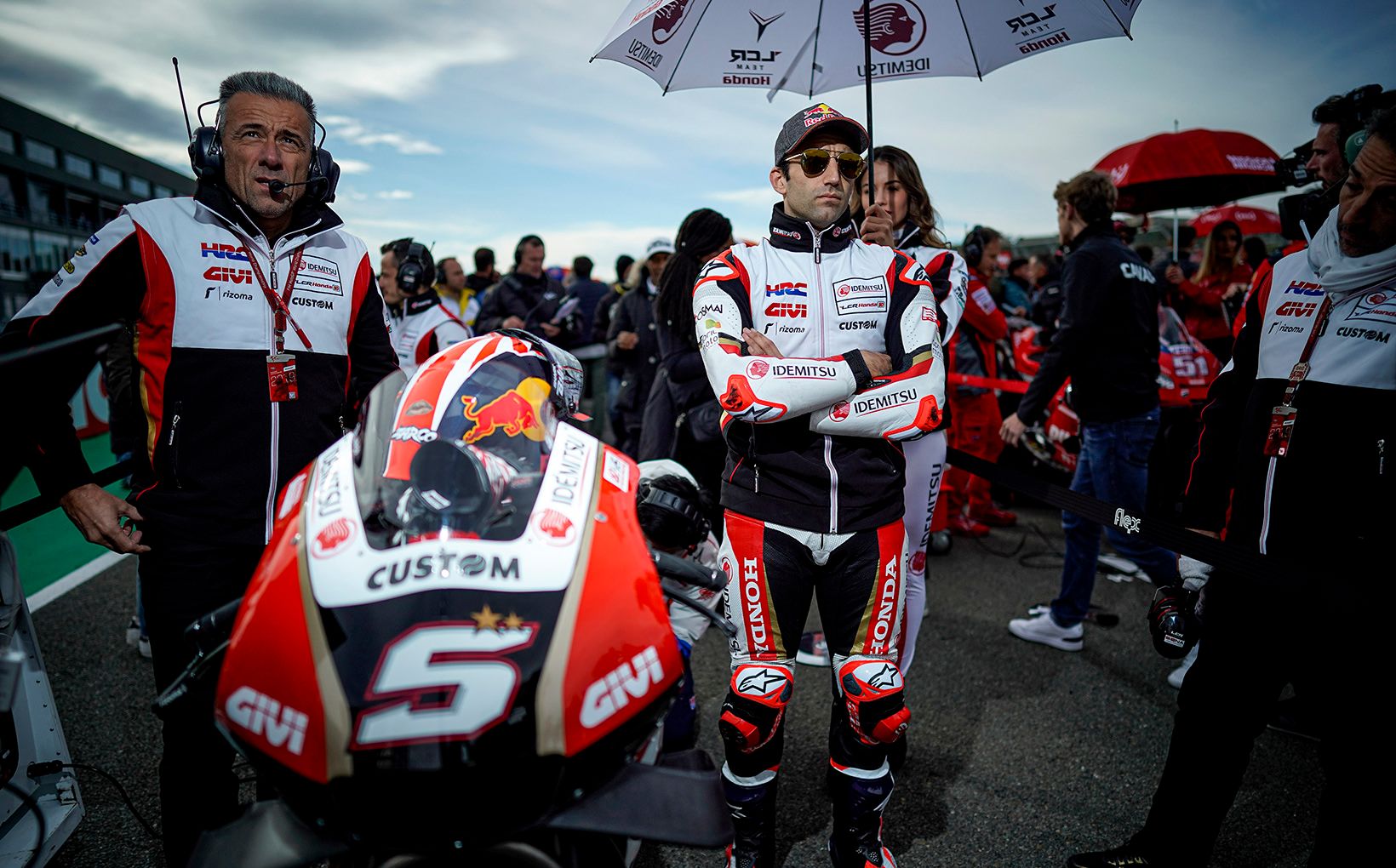 With testing underway, we look forward to seeing how the times unfold, which chassis is picked, new parts and whether Zarco stays in the premier class or decides to reside in Moto2 for an extended period of time until various seats open up after contracts conclude.

All we know is that Zarco will be sore after being flipped by Tech3 KTM rider Iker Lecuona’s MotoGP bike which could have seriously destroyed the legs and feet of the Frenchmen. It was not an ideal finish to the 2019 season. 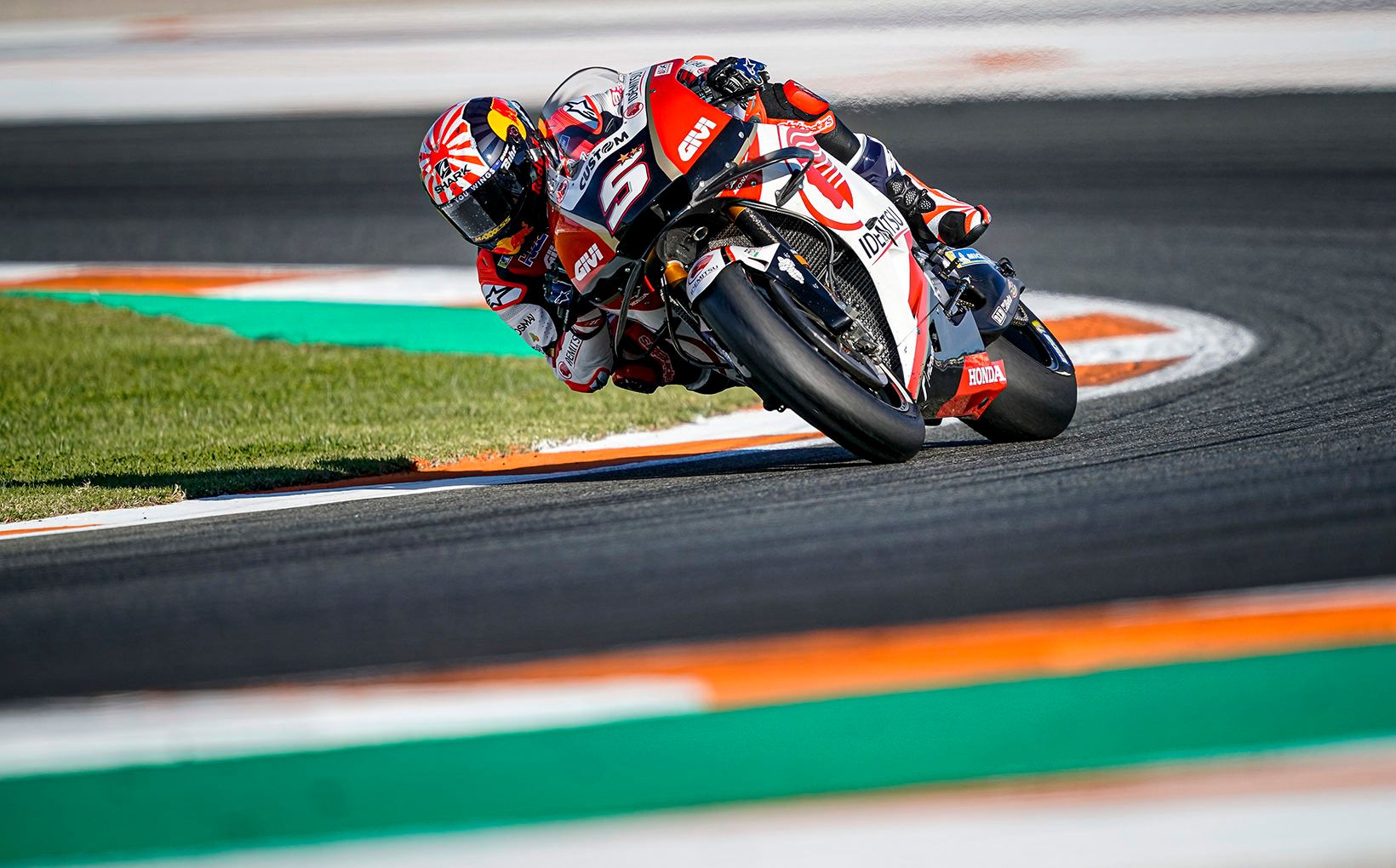 JZ05: “I’m ok, I think the injury could have been worse. It was a difficult race. I knew it was going to be a long race, so I thought that with a used tyre maybe I would have the right pace. Thankfully I was around the tenth position which was good. After overtaking Pol Espargaro I tried to get a better pace, I saw (Danilo) Petrucci crash and I don’t know if I lost a bit of focus because a little bit later I also crashed in the corner. I was sliding and thinking it was a shame I’d lost the race, and I didn’t check on the bike and then the bike of (Iker) Lecuona totally took me away. I had big pain on the left ankle and I was scared, but now it’s not so bad as there are no broken bones. We’ll have to do some more tests tomorrow, but it’s ok I think. It’s a shame to finish the season in that way.”

In reflecting upon 2019, many goals were ticked off, ups and downs were experienced, injuries quite serious, new technology developed, happiness, sadness, the retirement of one, the introduction of others and with so much more to come! Brace yourselves because 2020 is going to be epic with the silly season of contractual negotiations in full swing.