Danilo Petrucci Wins his First Ever MotoGP Race in Mugello! 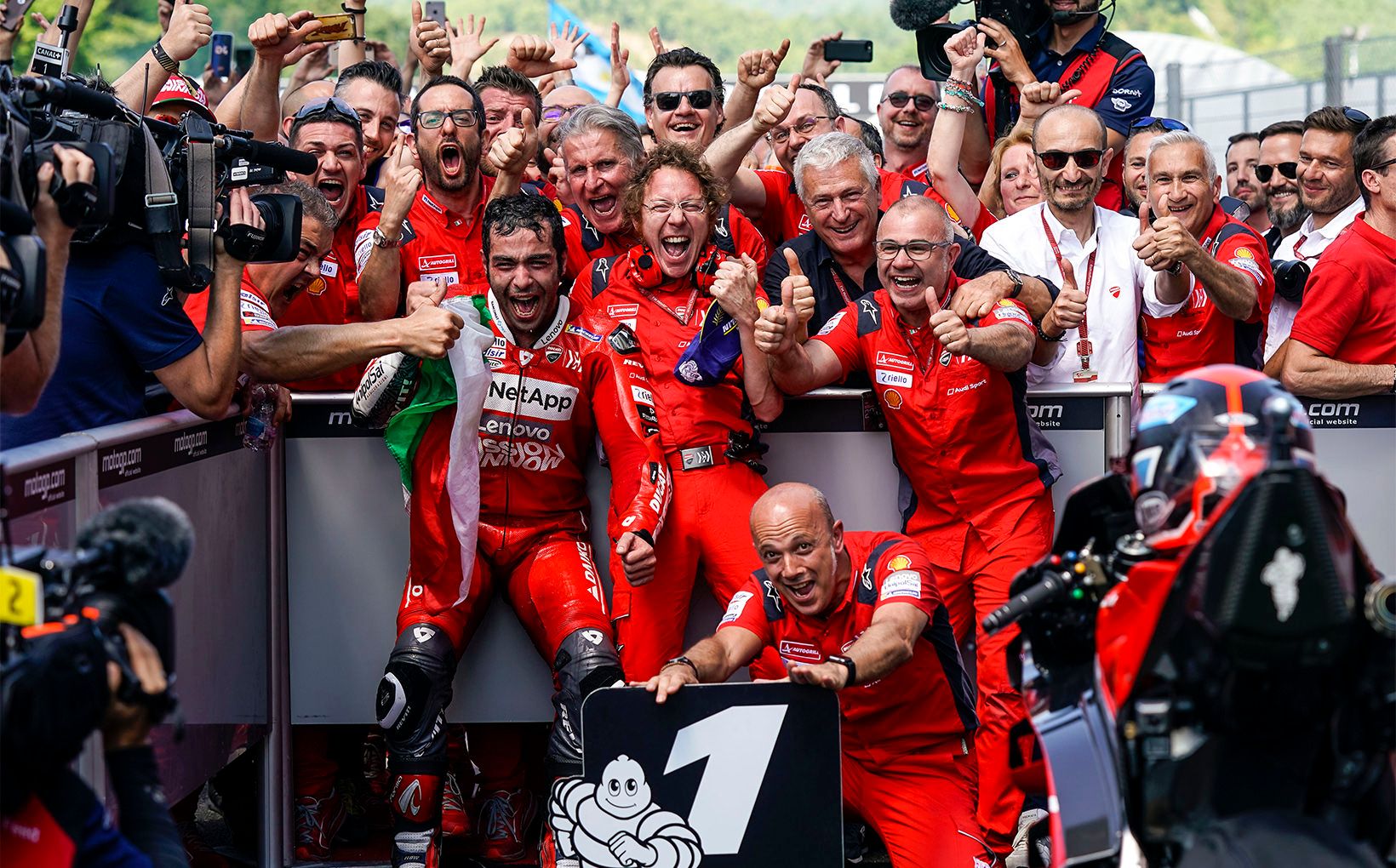 Home town hero Danilo Petrucci had tears running down his face and inside his helmet upon winning the 2019 Italian Grand Prix. The Mission Winnow Ducati MotoGP rider was sensational lap after lap even with a flu that shook up his sinuses and caused him to breathe deeply at a concentrated pace in order to stay focused. Petrucci put his career on the line because winning at home for Ducati not only cements his position with the team, it also showcases that he is fast even against fellow teammate Andrea Dovizioso who did not like a move that Petrucci put on him and Marc Marquez which saw both riders having to sit up to avoid crashing. It was pure brilliance. 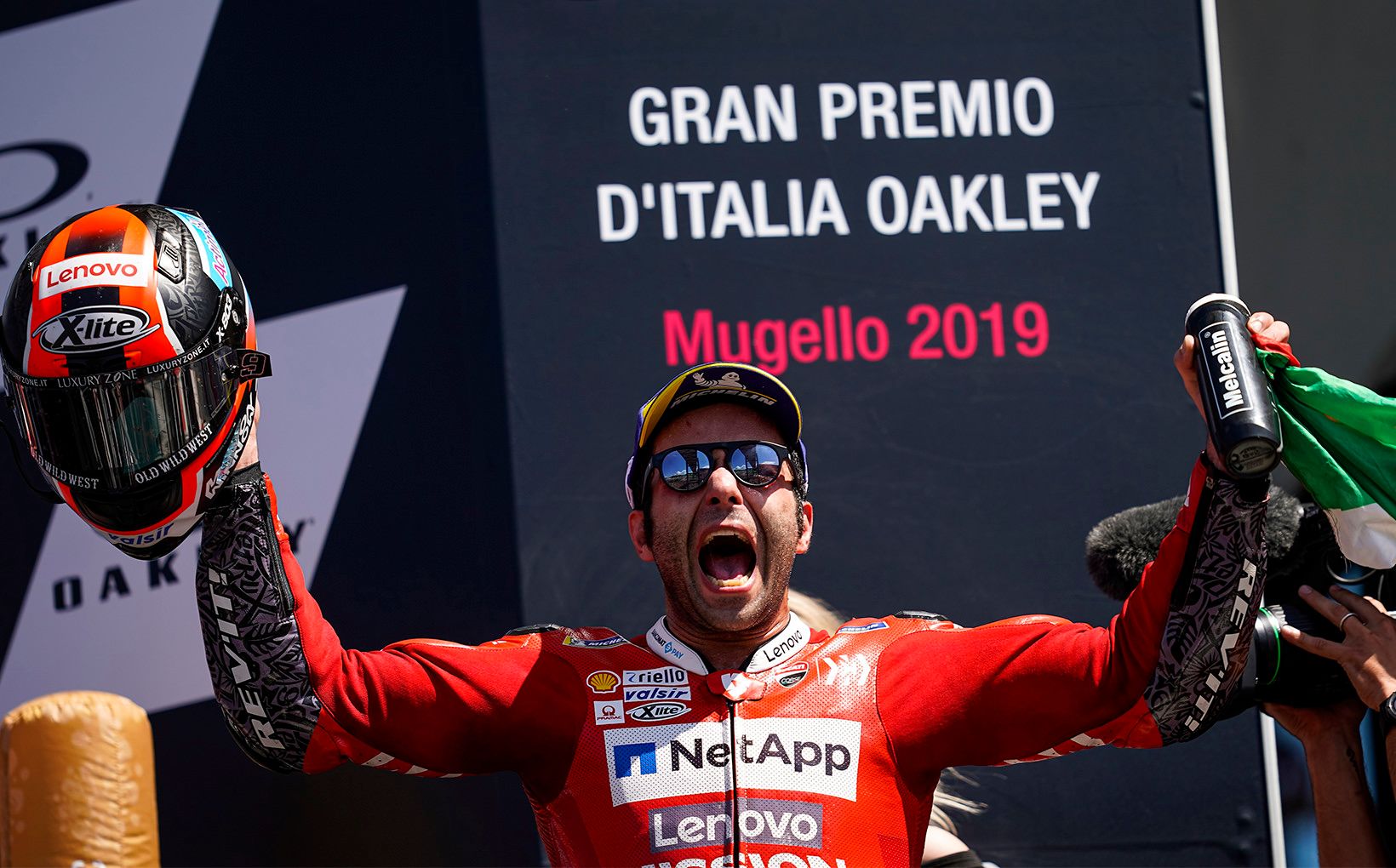 Winning your first MotoGP race with an Italian factory and at home is like a fairy tale. Petrucci’s tears of joy were shared across the paddock, grandstands and general admission areas. It is now three years in a row where the red beast has won with a new winner each year: DesmoDovi, Jorge Lorenzo and now Petrux. In addition to the win, he also moves up in the title race with Valentino Rossi falling victim to a ‘DNF’ as a result of running in to the back of Joan Mir and then crashing abruptly a few laps later. 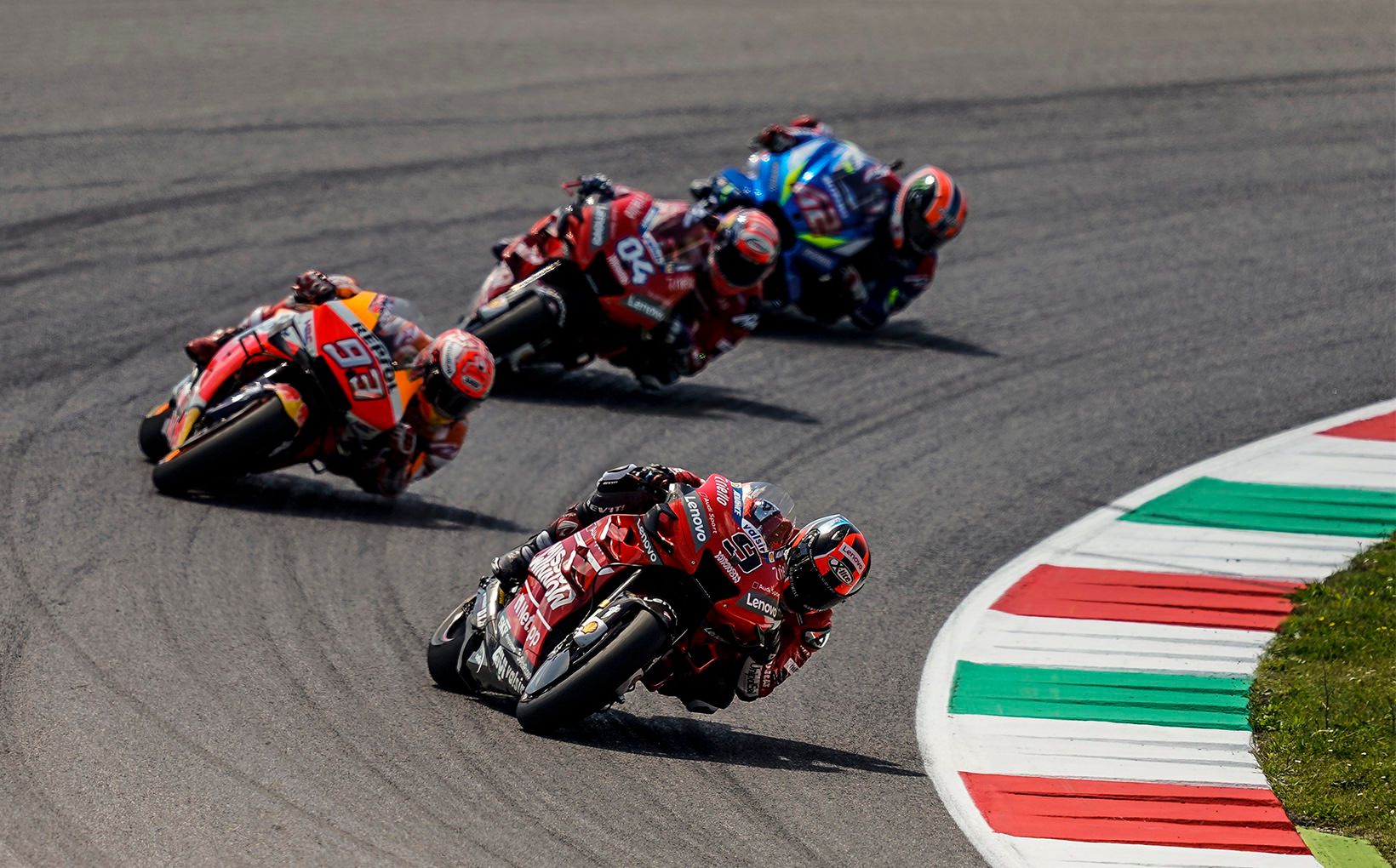 DP09: “I really wanted this victory and when I realized the pace at the front wasn't too fierce and I was able to manage my rhythm in the leading group, I told myself it was the right time to go for it. I tried to control the race by staying in the lead to avoid the risk of losing too many positions in the battle, dictating the pace to preserve the energies and the tyres for the final rush. I was a bit worried about the slipstream as we entered the final lap, but I managed to brake really deep and find a small gap between Andrea and Marc to retake the lead, then I simply pushed as hard as I could until the chequered flag. A good chunk of this win came thanks to Andrea, who took me under his wing this winter and gave so many precious tips. Now we'll keep fighting together for the championship."

Regardless of the win, DesmoDovi was not entirely satisfied with his third place finish. More points was the key statement made when interviewed after the race. The loss of a few points is devastating to Dovizioso as he takes each missed opportunity quite hard. Even with his advice and tips, you have to be happy for the new comer to Ducati because he is genuinely one of the nicest guys in the paddock. We remember meeting Petrucci when he had just started at Alma Pramac and his brother was cleaning his leathers, doing everything to stay in the sport and one day hoping to win. The hard yakka has certainly paid off! AD04: “It would have been better to score a one-two finish, but Márquez was very competitive also here. As for us, we struggled a bit early on in the weekend but once again we managed to stay in contention until the very end during the race. We want more and we'll keep working to improve." 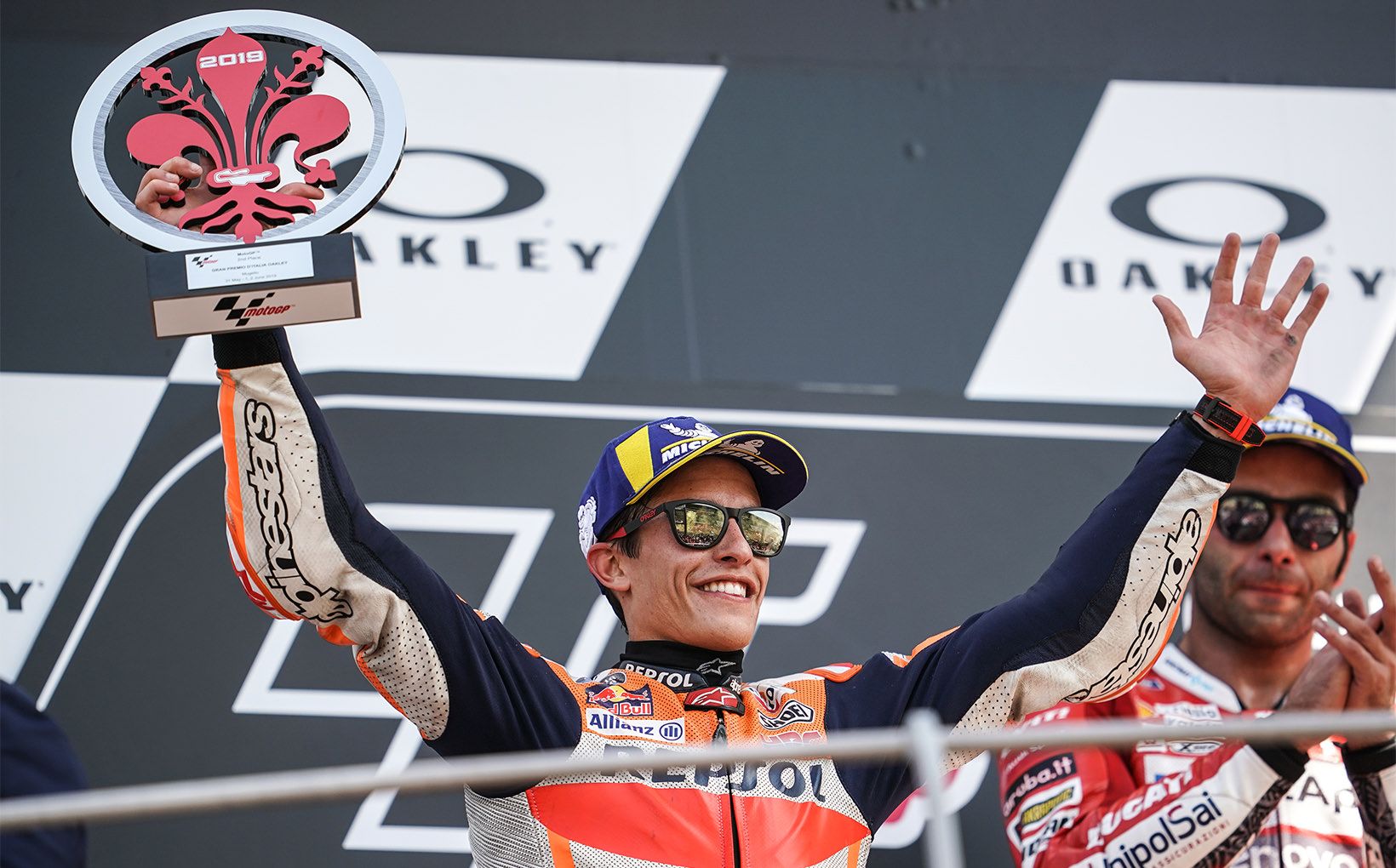 In turning to Marquez, what a stellar athlete and one who never gave up. The Spanish World Champion pushed to the limit at all times and did not yield for the sake of it. In fact, he swapped paint, notes made on his leathers with the Ducati riders including Jack Miller which was a fierce battle and Team Suzuki Ecstar Alex Rins. As we know, Marquez is an excellent defensive rider when required and he did exactly that on Italian home soil. If there had been an extra length on the main straight to the flag, Marquez would have probably just caught Petrucci. MM93: “Today was time to defend, and we did it in the best way we could because usually this is not one of our best circuits. I stayed calm and waited to try something in the last lap. I was able to try but I missed the apex on the first corner and then both Ducati overtook me. Petrucci rode very well at the front today, congratulations to him. My goal was to finish in front of Dovizioso and Rins and we did this so I’m happy.” Marquez laughed as he discussed the happiness he had for Petrucci winning because his main rivals were behind him. The electricity of the crowd was amazing to witness as they cheered as their favourite rider went past. Tears of joy for one and tears of sadness for the other. 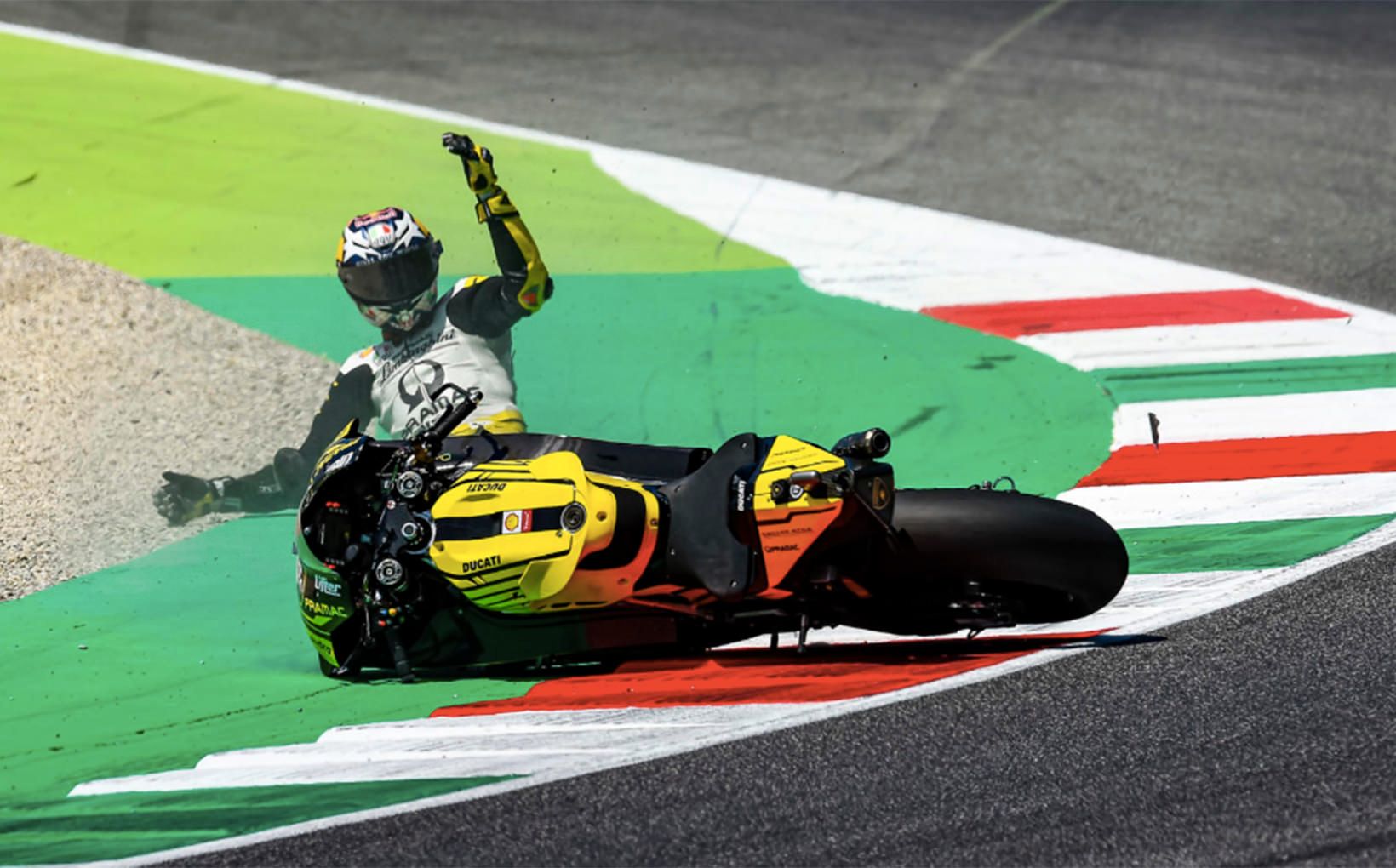 During the race, we thought Miller was on course for a podium and potentially a race victory. When the lap time came down and he pushed, the bike ended up going from underneath him after a seriously hard battle with the four front runners. The Australian was eager and unfortunately it led to a sad end. JM43: “It was a very exciting race. I was with the front group and it was a fantastic battle. The feeling with the bike was very good and I started to push after seeing Petrucci and Marquez trying to make the gap. I tried to overtake Rins but then I crashed.” The lesson learned will be an important one because Miller has been trying to adapt to the edge grip and finding ways to ensure his race is not dictated purely by burning away too much rubber. We are proud of Miller and know the next few races are going to be thrilling as he charges once again for a top spot. 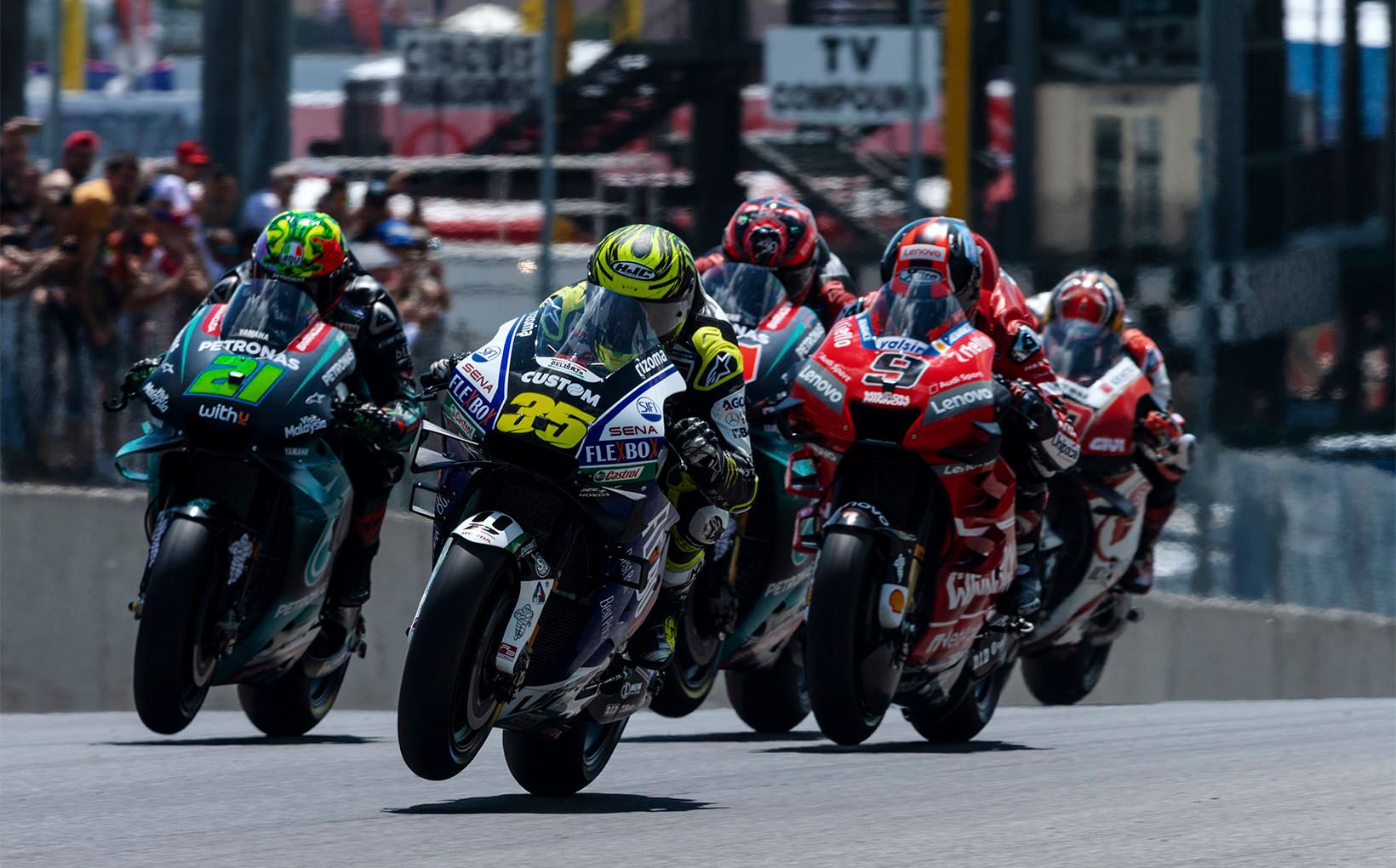 In assessing one of Miller’s close friends, Cal Crutchlow also struggled and we noticed his pace drop significantly over numerous laps which came as a result of abnormal tyre wear. CC35: “Today was a very difficult day, quite possibly my worst race of the season. Again I was in the front group, but then got dropped from the front group which has not normally happened to me in previous years. I had a bad feeling with the bike when I was changing direction, which was happening all weekend, and I was not able to be competitive in that area. Then with about 14 laps remaining I felt a big drop in the rear tyre and was unable to keep my pace throughout the rest of the race. After the race we assessed the situation with the team and Michelin and found an unusual rubber wear on the rear tyre.”

Overall, the 2019 Mugello race was wonderful across all three classes. At times, the MotoGP riders were chopping and changing positions like Moto3. Can you imagine putting yourself on a bike of this calibre and leaning over at 65o to slide around and out of a corner at high speed?

The riders of the premier class are truly inspiring year upon year. As we turn to Barcelona, the rest of the grid will be looking to pick up their act. In particular, the factory Monster Energy Yamaha team. Their race pace and performance is poor and frustrating for fans who idolise Rossi and Maverick Vinales. The sister Petronas Yamaha Team with Fabio Quartararo and Franco Morbidelli is outranking the two more experienced riders. 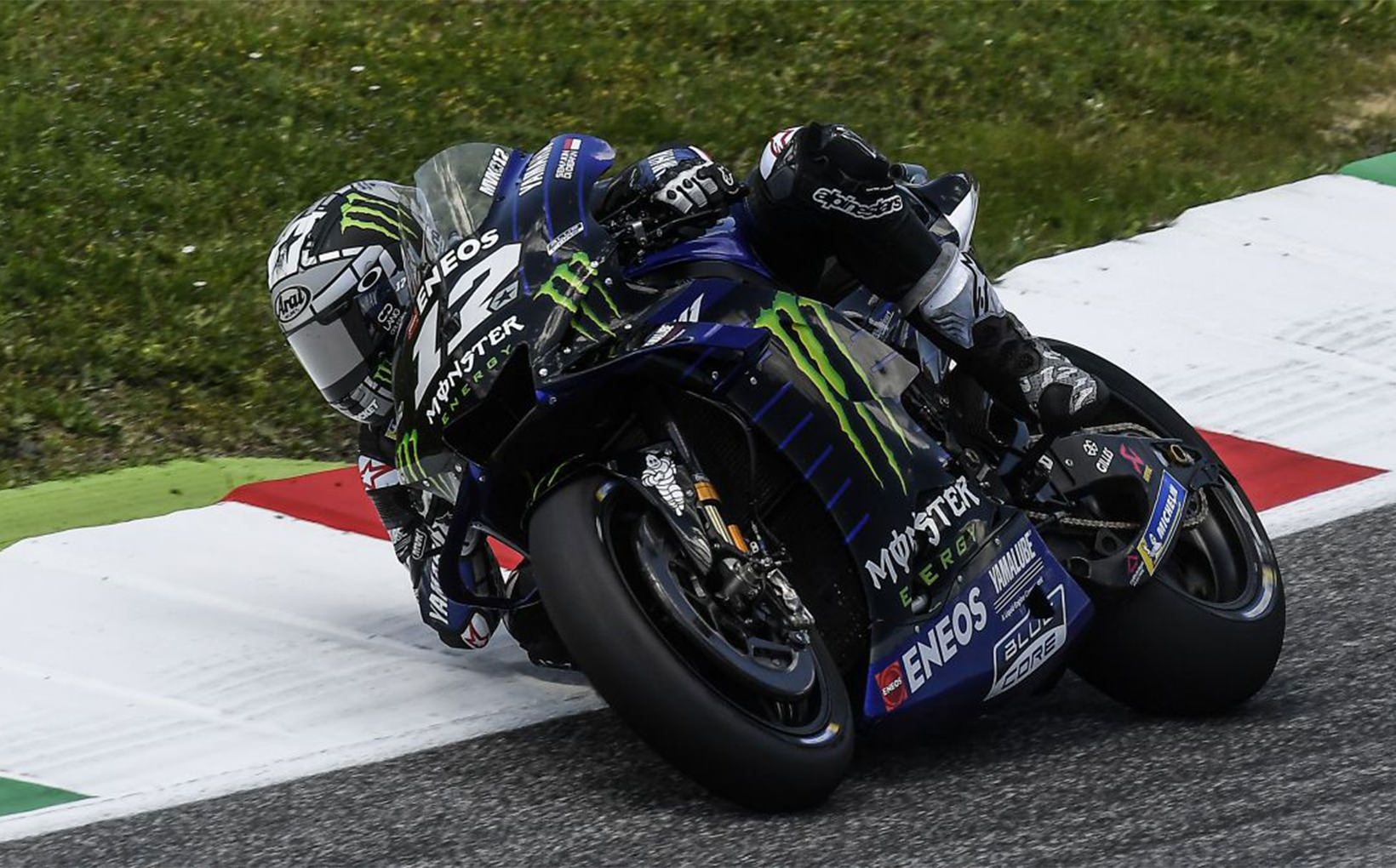 MV12: “Our bike suffers a lot when we don't have grip. So, we need to keep working to see if we can improve the feeling and take steps forward.”

In addition to fixing issues, Lorenzo will make his way to Japan to work closely with the Honda crew to find a way to make him more comfortable on board and allow him to stay at a higher energy level than what is currently being experienced. The Spartan is losing strength and succumbing to fatigue too much on board the orange machine. We have to finish off with Takaaki Nakagami as a stand out finishing in the top five for the first time on his LCR machine which is promising to see. TN30: “It’s the best result for me, I was the second Honda and fifth place is amazing. I didn’t expect it, it’s a fantastic weekend for me and I want to thank the team who did a really great job all weekend, the bike worked really well.”