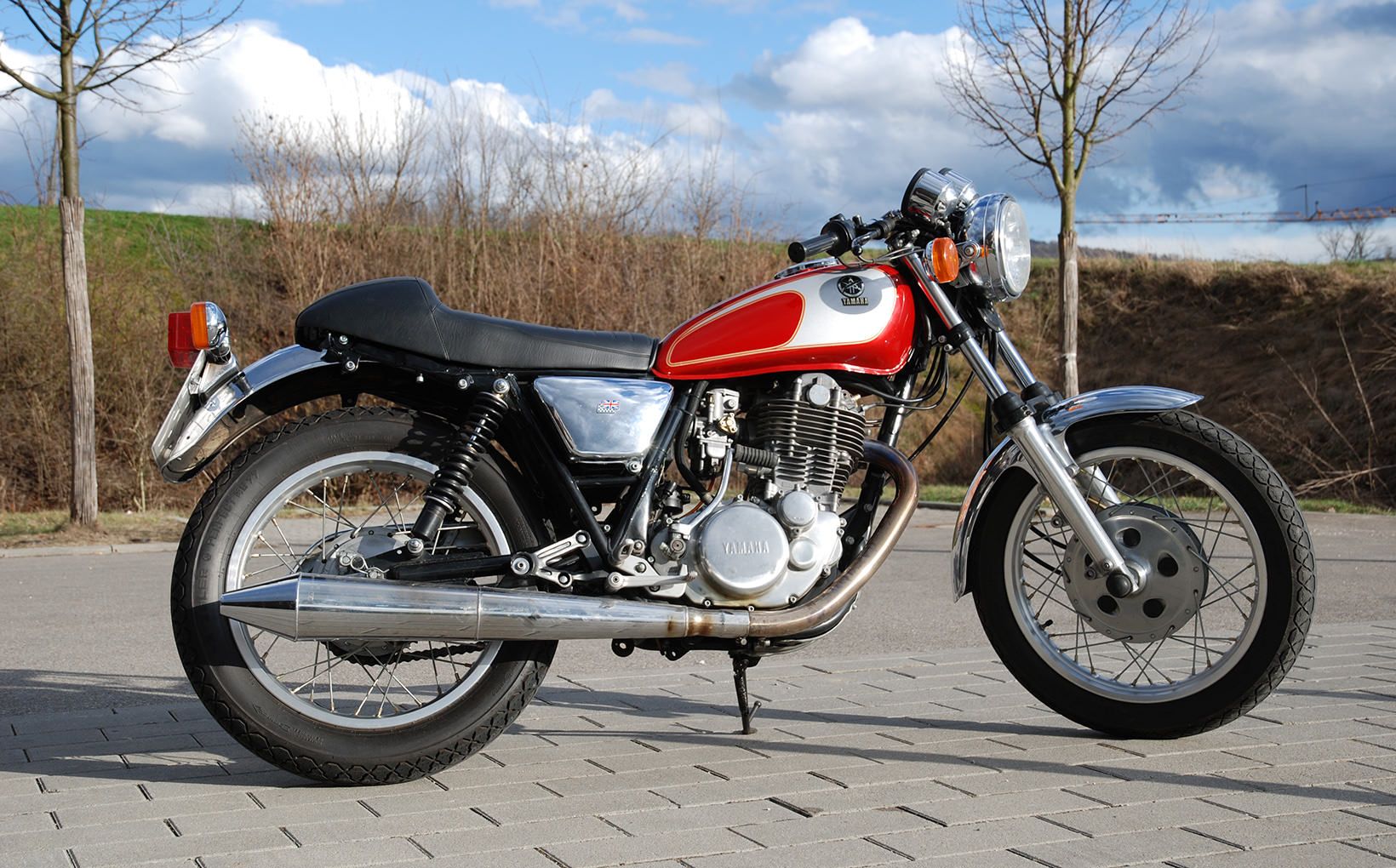 Yamaha’s SR500 is arguably the result of Yamaha noticing that XT500s had become a common choice of bike for a sporty road bike conversion, with a design brief given to Yamaha’s designers to create just such a machine. 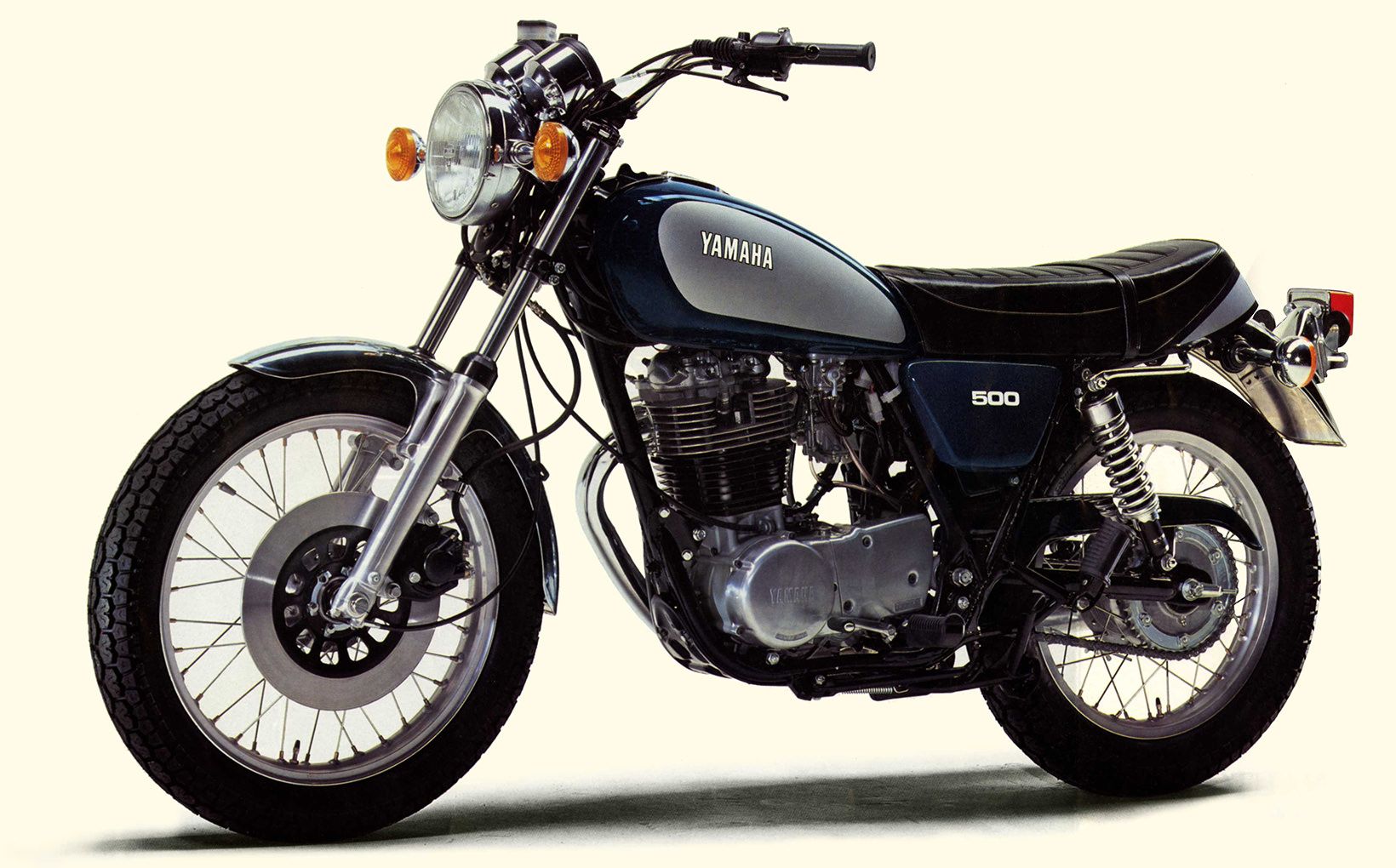 1980 saw the introduction of alloy wheels and tubeless tyres, as well as disc brakes.

Calling upon the iconic image of British singles, such as those produced by BSA, Norton and Velocette, the SR500 was created, albeit with Yamaha’s designers own take on what should comprise this kind of bike.

The original production run included a rear disc brake, while features such as chromed guards, kick-start only and simple yet elegant styling, were a winner. 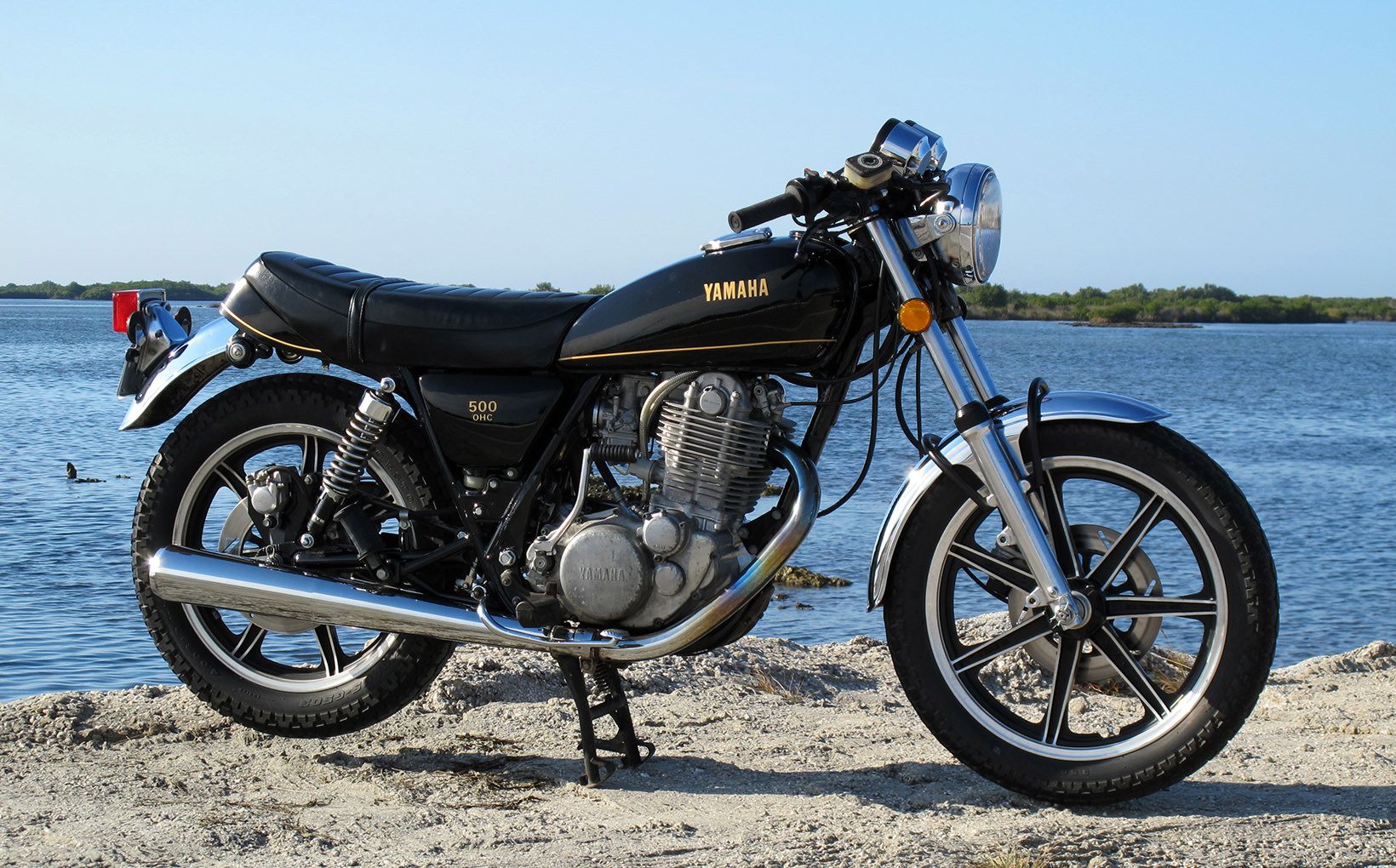 As other manufacturers moved away from road-going singles, particularly of the 500cc capacity, Yamaha cemented itself a position of strength that would attract motorcyclists for decades to come.

The air-cooled four-stroke SOHC single-cylinder engine with two-valves has a capacity of 499cc and a bore and stroke of 87 x 84mm, while induction was taken care of by a 34mm Mikuni VM34SS carb, while some later models had a smaller 32mm carb to keep in line with emission laws. 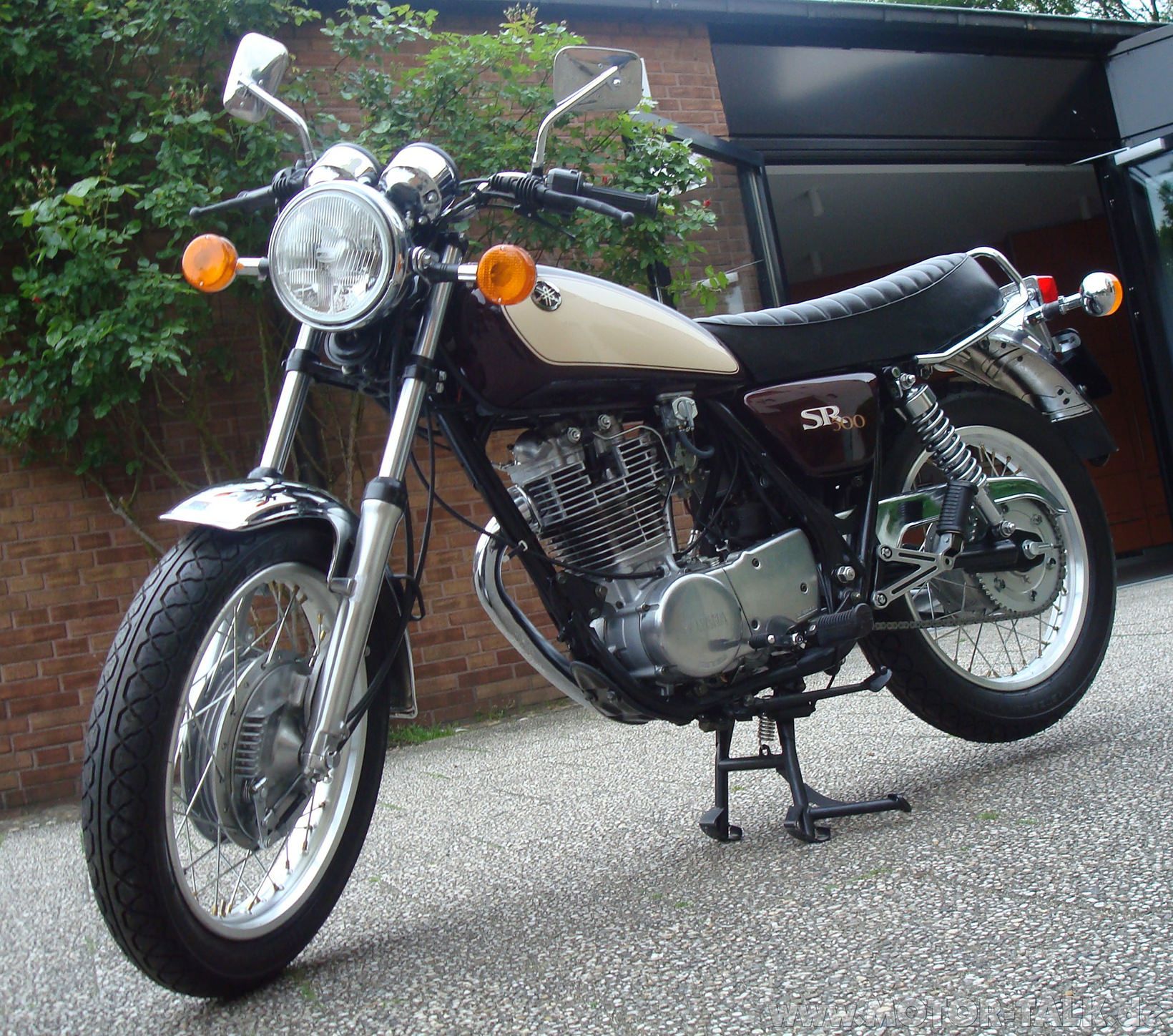 SR500s are a very popular platform for customisation.

Power, for its size was a relatively impressive 31.5hp, while torque of almost 27ft-lbs may not sound ground-breaking but is in fact commendable once you actually ride the bike and experience it for yourself.

Fuel economy was also extremely good, with the 12L tank providing up to 400km of range. 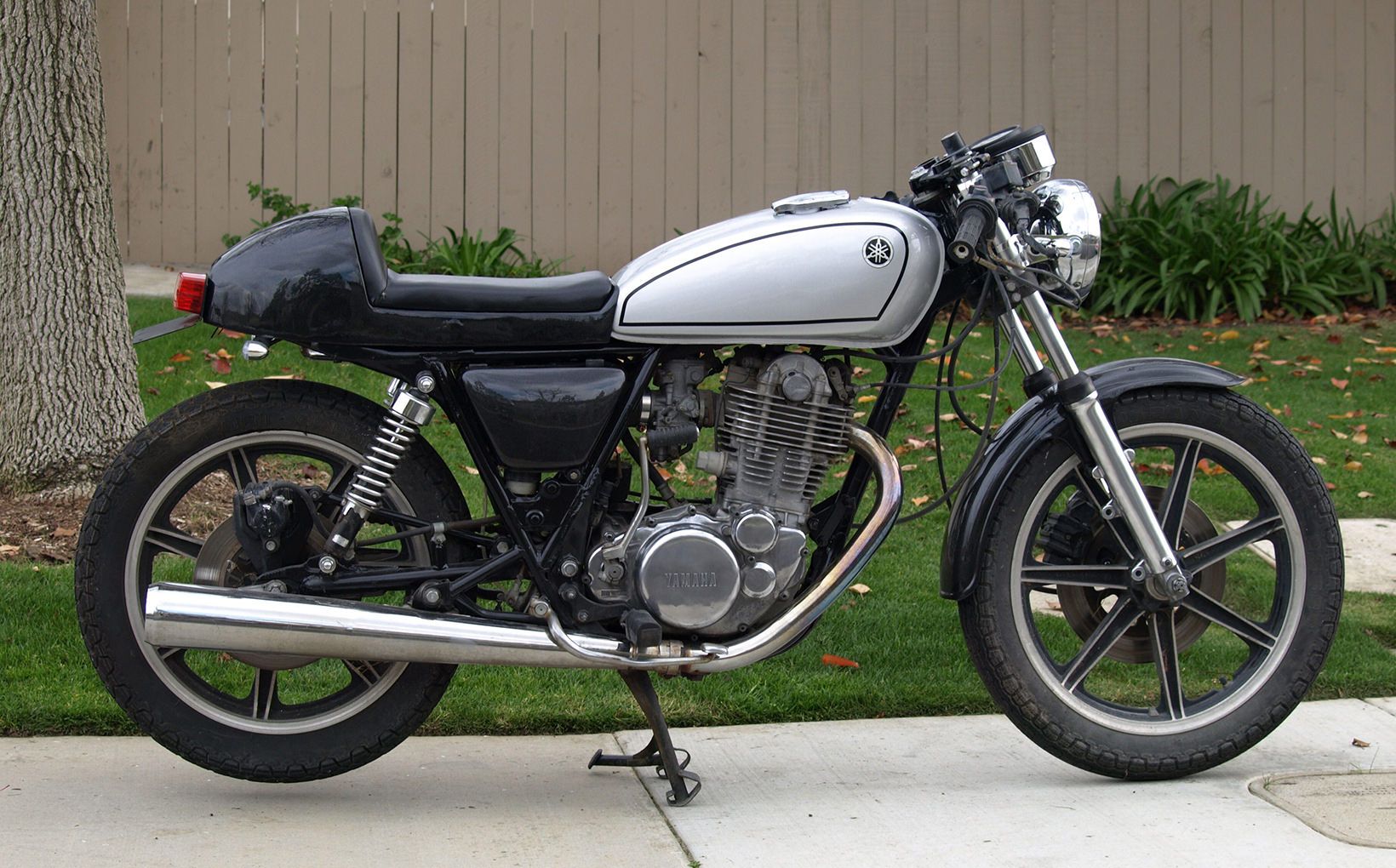 Oil is stored in the frame for the dry sump engine, while the 1980 SR500s received tubeless tyres in line with the rest of the Yamaha range, necessitating new rims.

With a dry weight of 158kg the SR500 is also relatively light and while the 35mm forks and preload adjustable rear shocks aren’t going to win any prizes, with the half-duplex cradle frame the bike is extremely nimble, perfect for slipping through traffic, while still retaining enough power and speed for freeway riding. 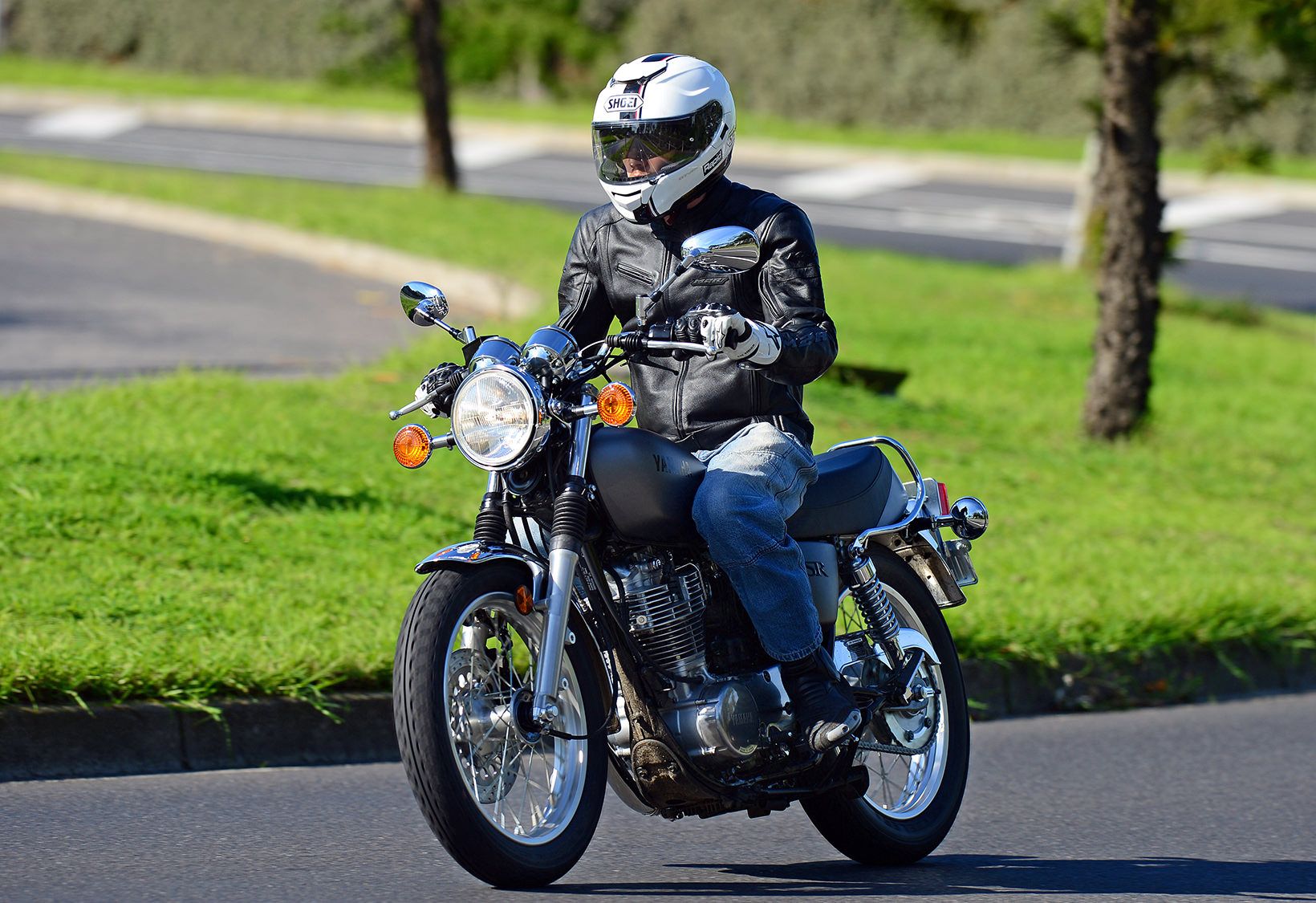 The SR400 was re-released here a few years back and we tested it in Melbourne.

When you add the fact that the bike was kick-start only you end up with quite a unique road offering, and perhaps the bike’s biggest success was with the custom bike crowd, with the SR500 providing a great blank canvas for customisation, including café racers and similar. 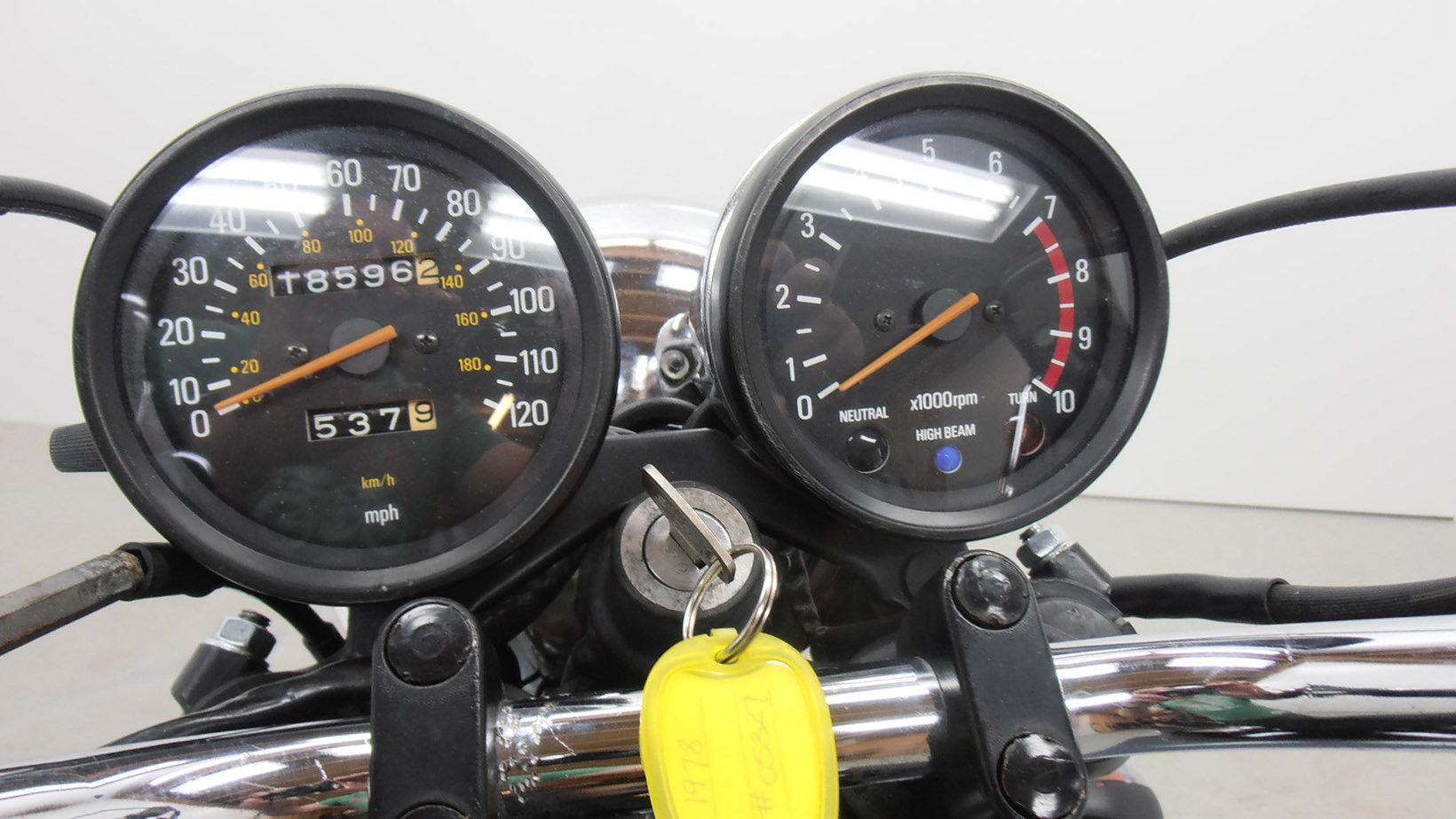 With a 7000rpm redline the SR certainly had some vibrations.

With all quality components, a stripped-down appearance to start with and no plastic components the SR500 captured the right attention, and you’ll quite commonly see them on the road today, often in extremely good condition.

Despite being kick-start only the SR500 is relatively easy to start, with a piston position indicator allowing you to easily get the bike to top dead centre (TDC), a decompression lever to allow reaching TDC more easily, as well as choke for when it’s cold and a button specifically for warm or hot starts, that cracks the throttle for you. 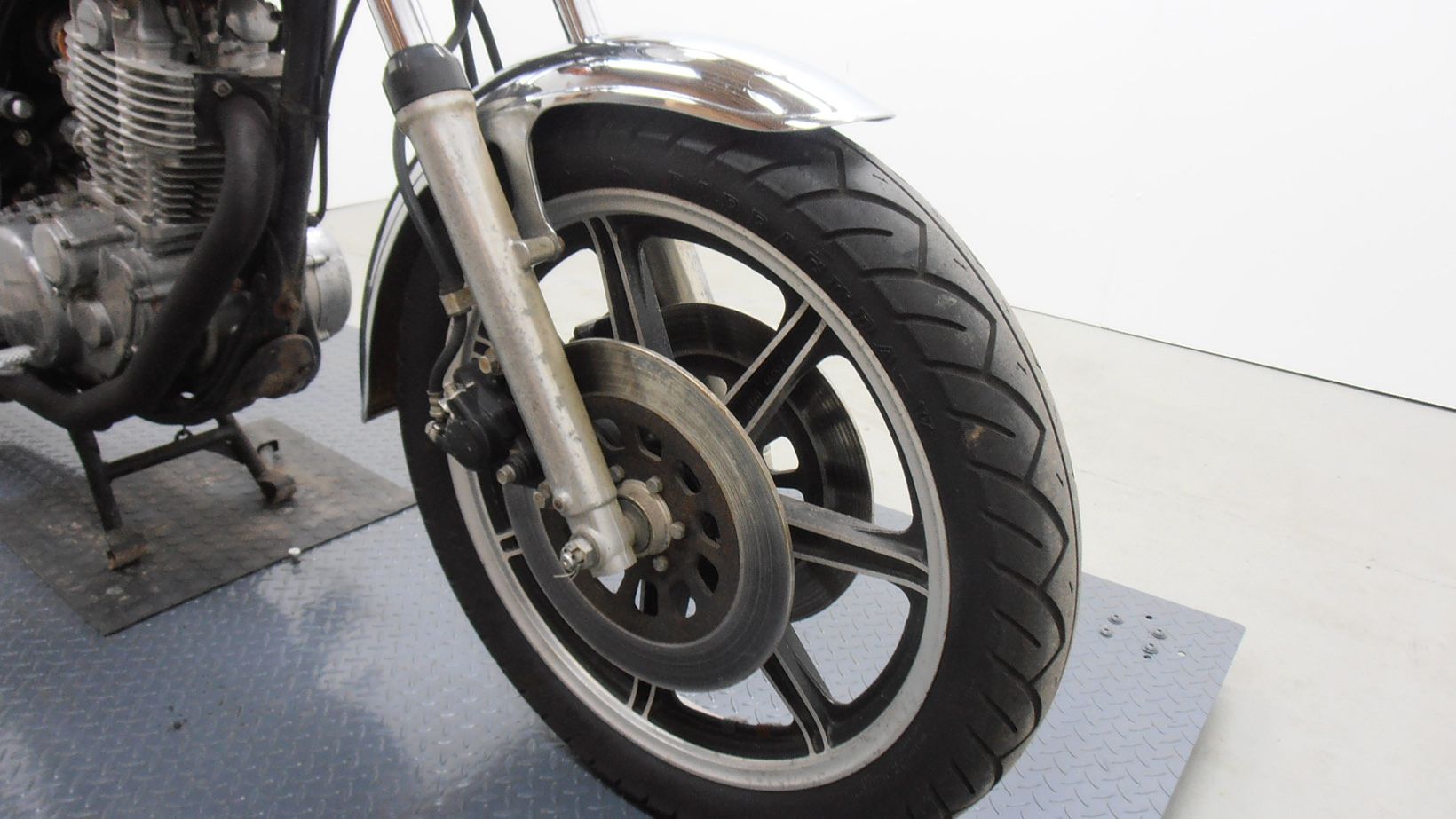 A variety of performance modifications have also become available and commonly implemented over the years, with plenty of die-hard SR500 enthusiasts finding the methods of boosting performance – normally without adversely affecting the ability to kick-start the bike! 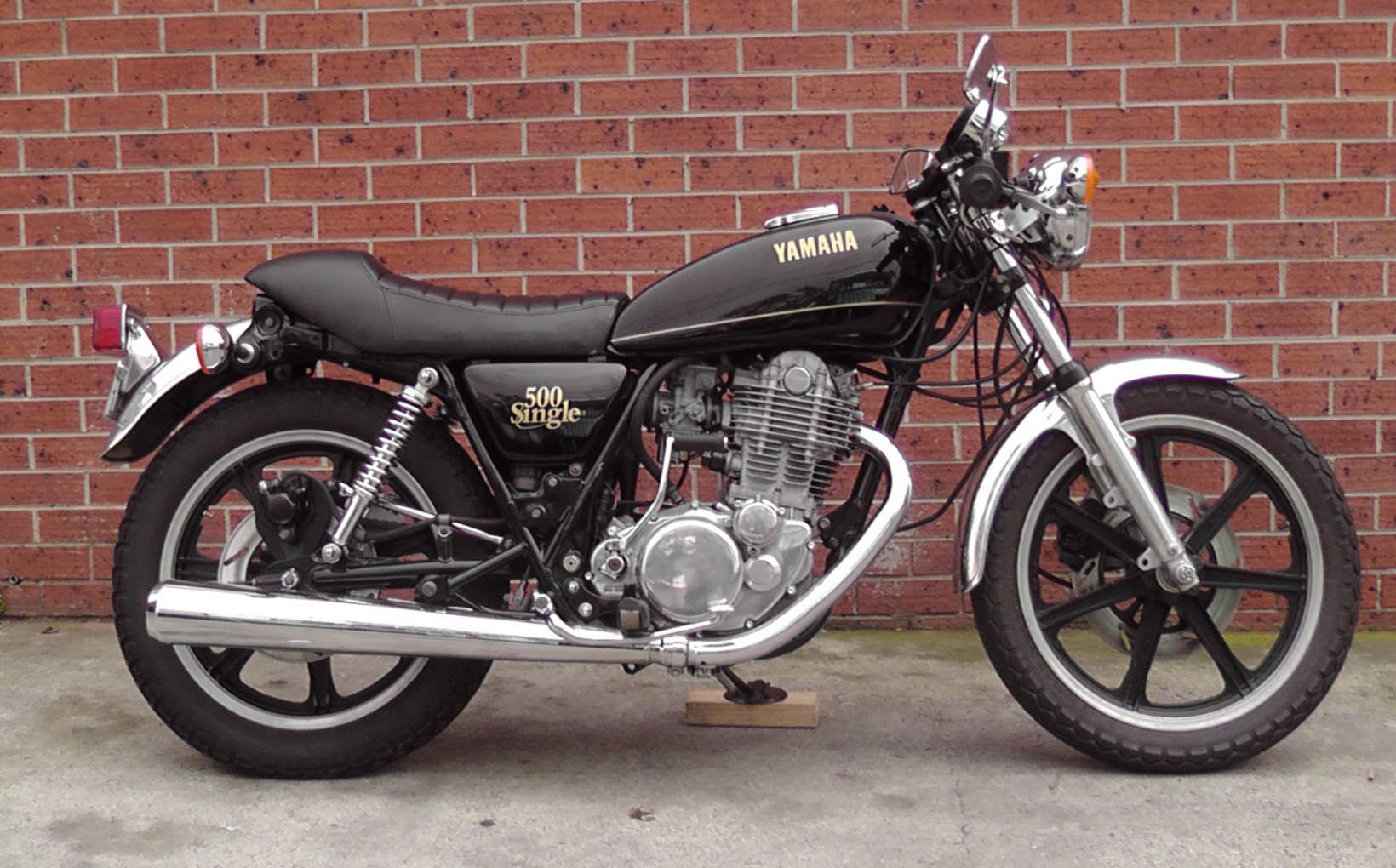 With the SR500 proving such a popular bike for customisation, when buying you’ll want to check exactly what you’re buying and just how original it is.

Being able to start the bike (if it’s assembled) is a good place to start, checking for excessive smoke, engine knocks and avoiding drowning the plugs with too many failed attempts. If this happens, you’ll need to use the decompression lever and pump the fuel out of the cylinder, before attempting again.

Check the chrome for rust spots, or areas that have been polished deeper than other areas, where rust may have been removed, particularly on the guards, fork tubes and on the muffler. Also check the rear of the tank where the seat connects for rust or damage. 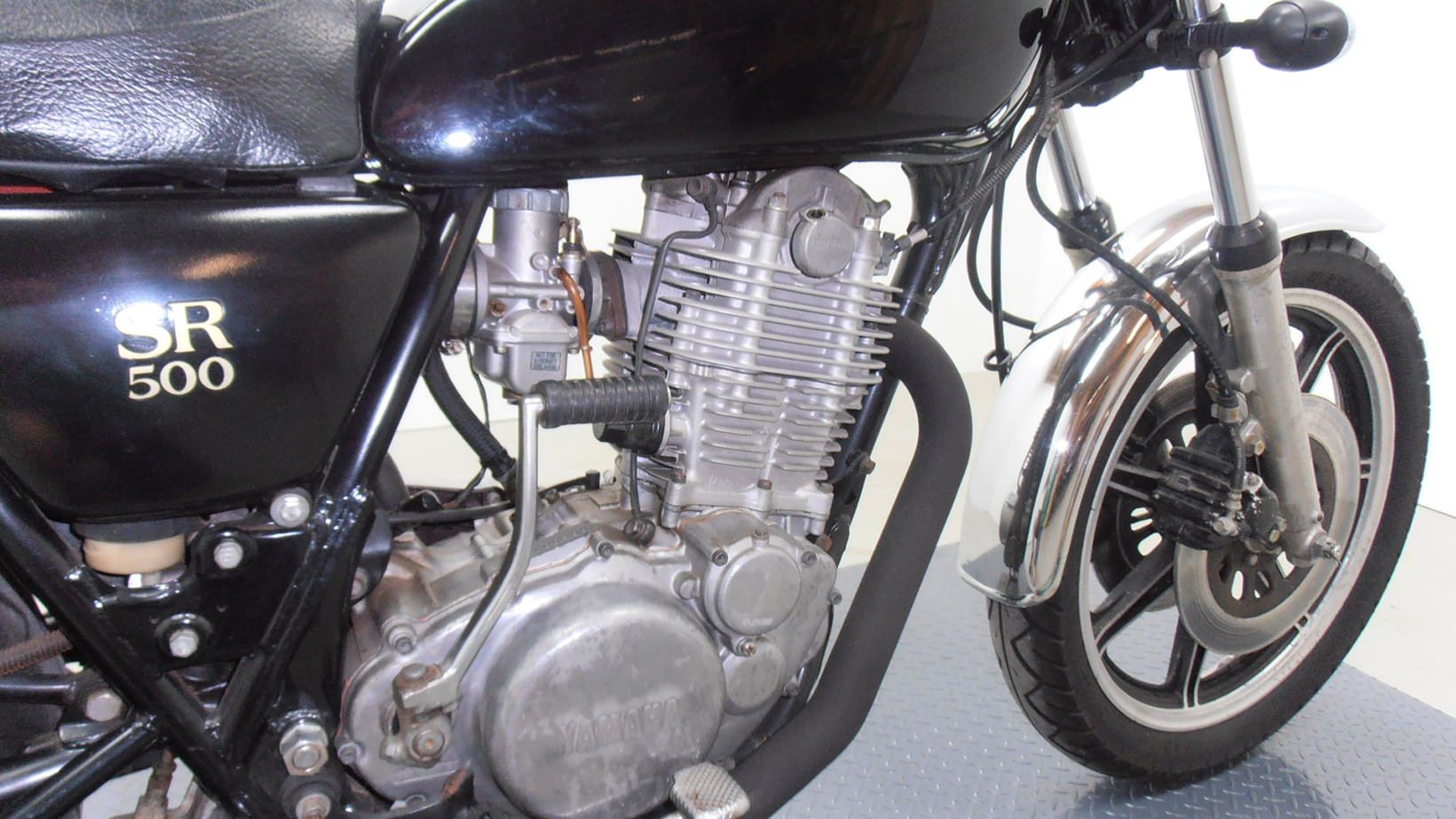 Also check the speedometer condition and needle response while riding, as some have been known to fail and are expensive to repair or replace.

Check the tyres and brakes by placing the bike on the stand and spinning the wheels, to ensure they are running true and aren’t making any unusual noises, which may mean bearing damage. Similarly apply the brakes to ensure they are working and releasing properly. 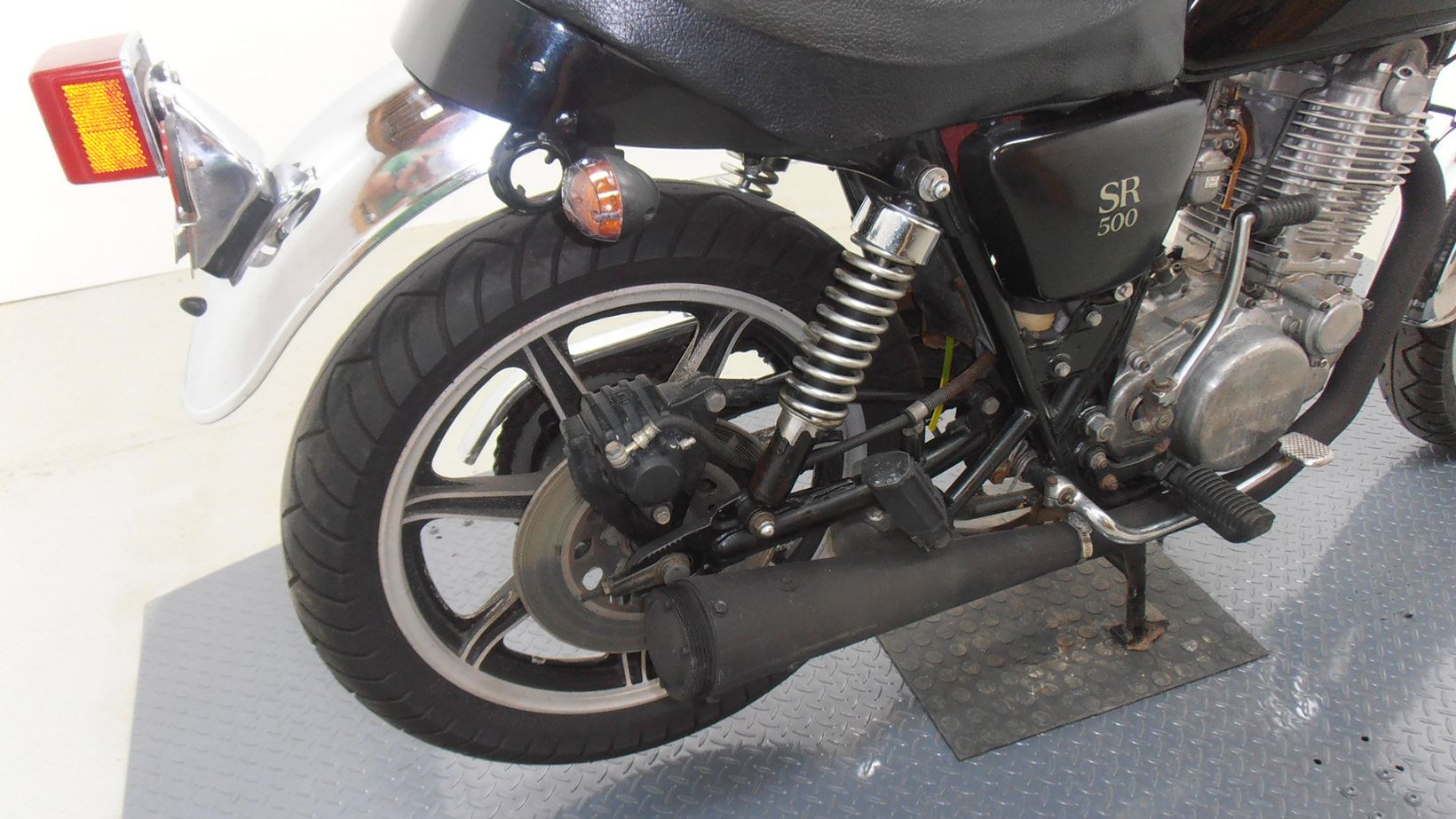 As early models came with tubed tyres and rims, it’s also a good idea to check what you’re buying, as relying on the year model isn’t always accurate as to whether you’ve got tubed or tubeless rims, particularly as the bike may have received new rims in its life. Later models will have ‘Tubeless tyre applicable’ stamped into the rim.

Also, with SR500 production continuing until 1999 in both Europe and Japan due to popularity, models past 1981 are most likely to be grey imports.

The SR500 over its production life have also come with both alloy-rimmed wire-wheels as well as mag wheels, and a variety of combinations of both drum and disc brakes. Some also had black engines, as well as different headlight sizes.

Also keep an eye out as the SR400 was released in Japan and later here (see our test), alongside the SR500 and while sharing nearly all components had a shorter stroke and created considerably less power. 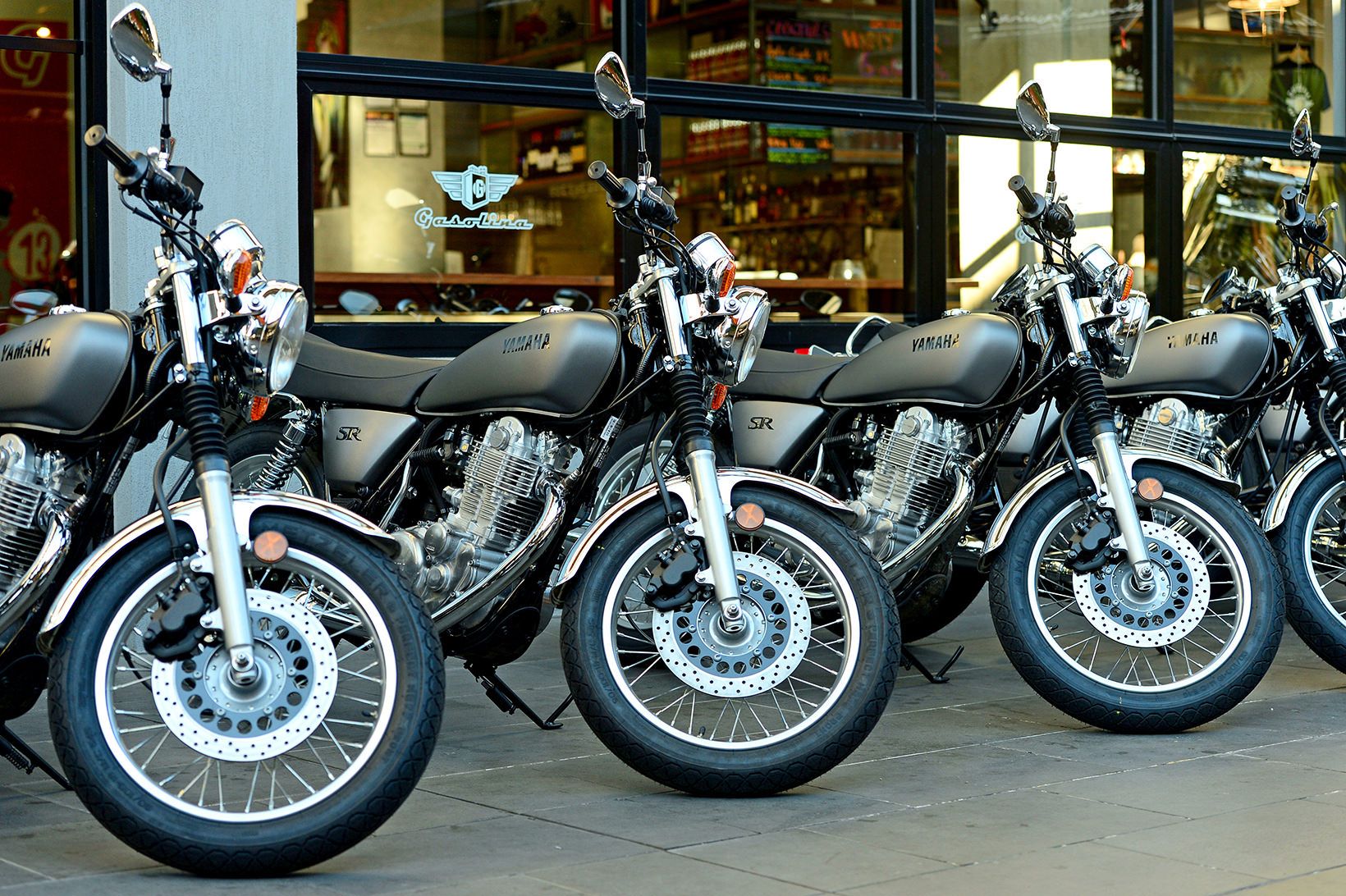