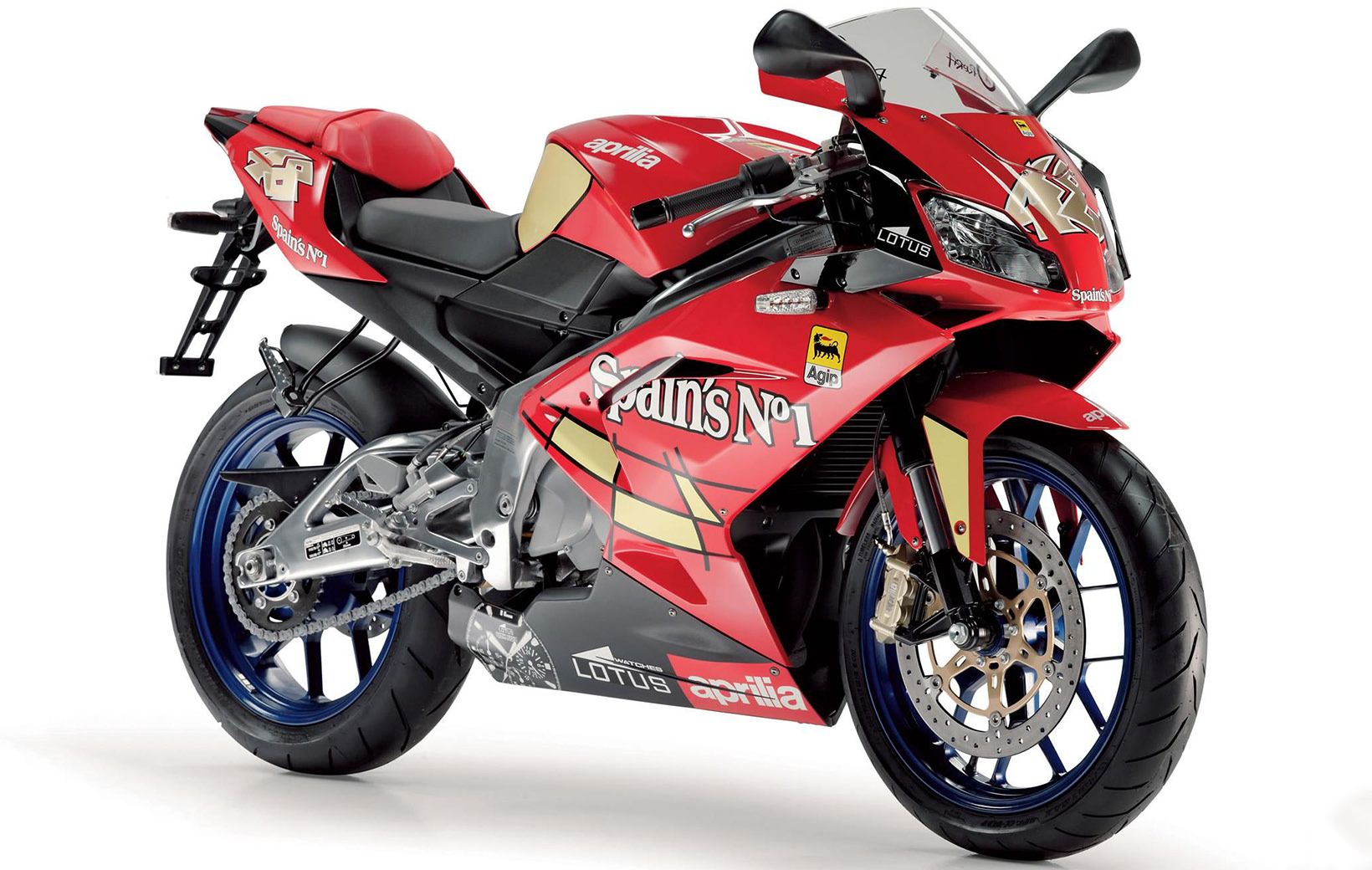 The RS125 is lithe, diminutive, attractive and sharp, with wind tunnel tuned RSV styling and race bike livery. It’s the kind of bike that may turn a boy into a man or, vice-versa. It’s gaawjuss! All cycle components look the business too, perform well and are suited to the lean design. This Aprilia “race replica” is proudly derived from Aprilia’s Grand Prix engineering technology and is a champion performer. 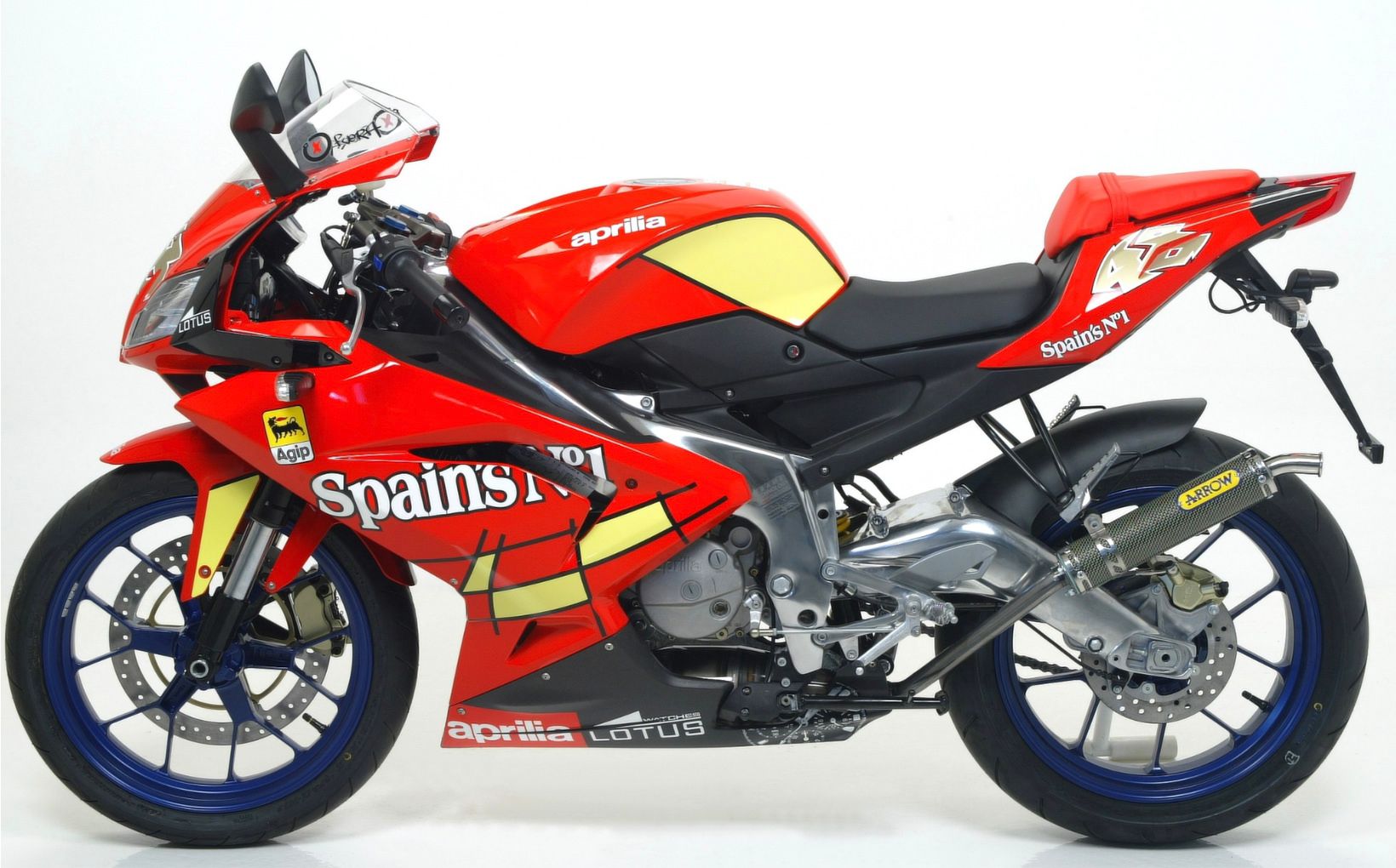 Riding the RS is a delightful experience, with endorphins on tap surfing the bends. It feels stable at speed, yet can be easily and precisely turned and is perfectly suited to tight, winding roads or tracks. Once you are motoring in the top 20 per cent of the rev range there is sufficient urge to propel the lion cub through and between bends at a good clip. The cornering speeds on offer are high due to nimbleness of the bike, however you need diligence to keep the engine boiling for best exit drive. 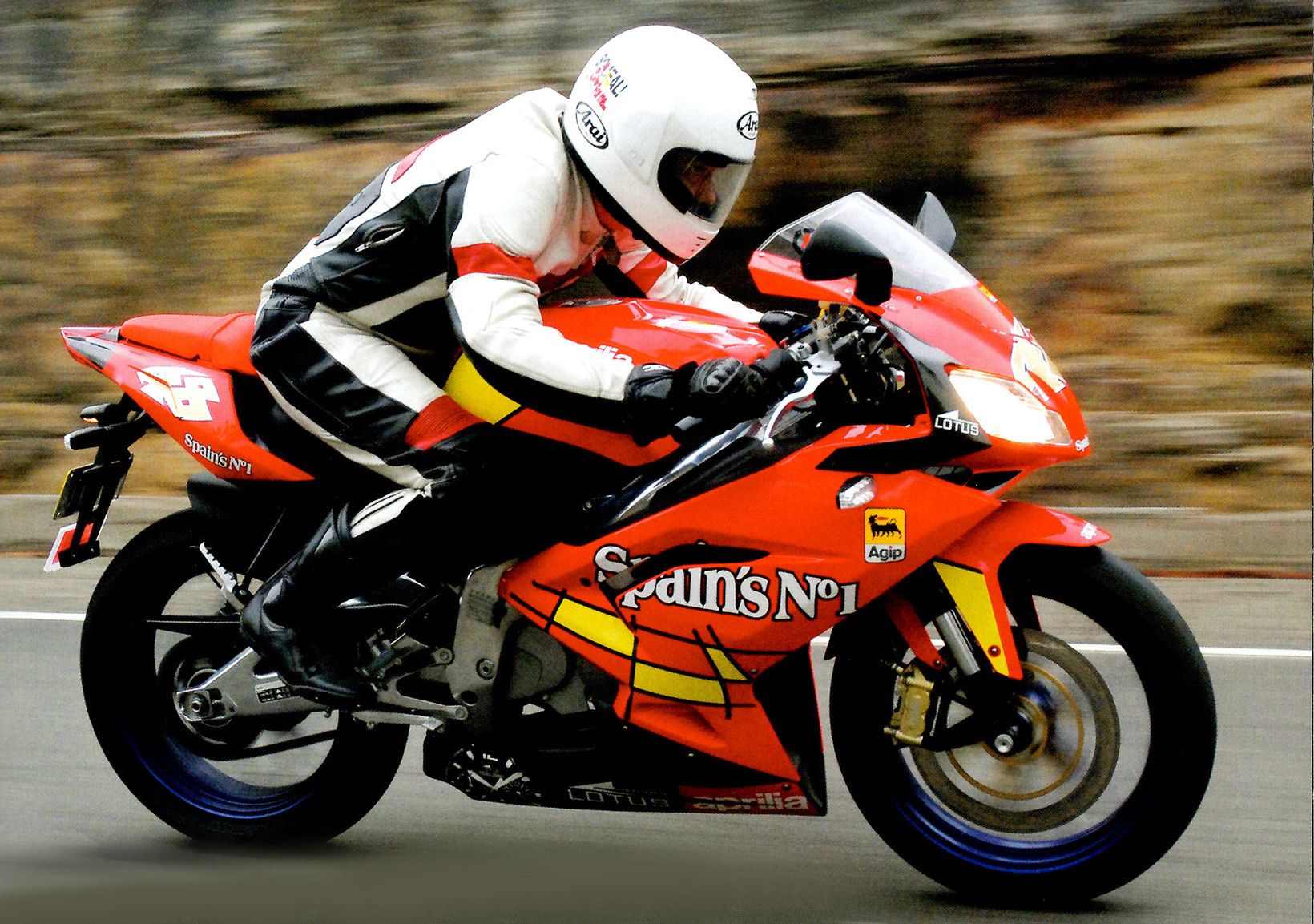 Simon Harris had an absolute ball testing the RS125. Such an exciting little bike and a lot less bland than a modern four-stroke LAMS machine.

The keystone of handling, the frame and swingarm, are cast, thin-walled box section aluminium alloy with ribbed reinforcing in critical areas and is very stiff. The suspension, which is non-adjustable bar rear preload, coped with my 75kg nicely and exhibited well controlled damping all round. The front suspension only blipped over some nasty corrugations, causing the superlight to move across the road somewhat. No events from road surface to tyre to suspension to chassis to me occurred in a way to cause alarm—an excellent balance of chassis stiffness and feedback.

The RS125 was super popular in Italy and Spain with the boy and girl racers.

The Rotax (Austria) manufactured 125cc two stroke provides the thrust, which is not palpable below 5000rpm. From 5000-9000 the engine starts smoothening out and provides pulling power, from 9000-11000 it’s on song and able to create acceleration irrespective of gear. Remember, it is a race rep 125. Not having ridden a two stroke for several droughts, it took a minute to get the hang of moving off without being a bit wibbly-wobbly-woo. Not to mention throttling off on the approach to a corner, to find the bike still accelerating. Everything on the bike is light and easy to operate and it will not be long before you are acquainted and eager. Yes, there is also a lap timer in the multi-function analogue/LCD dash. 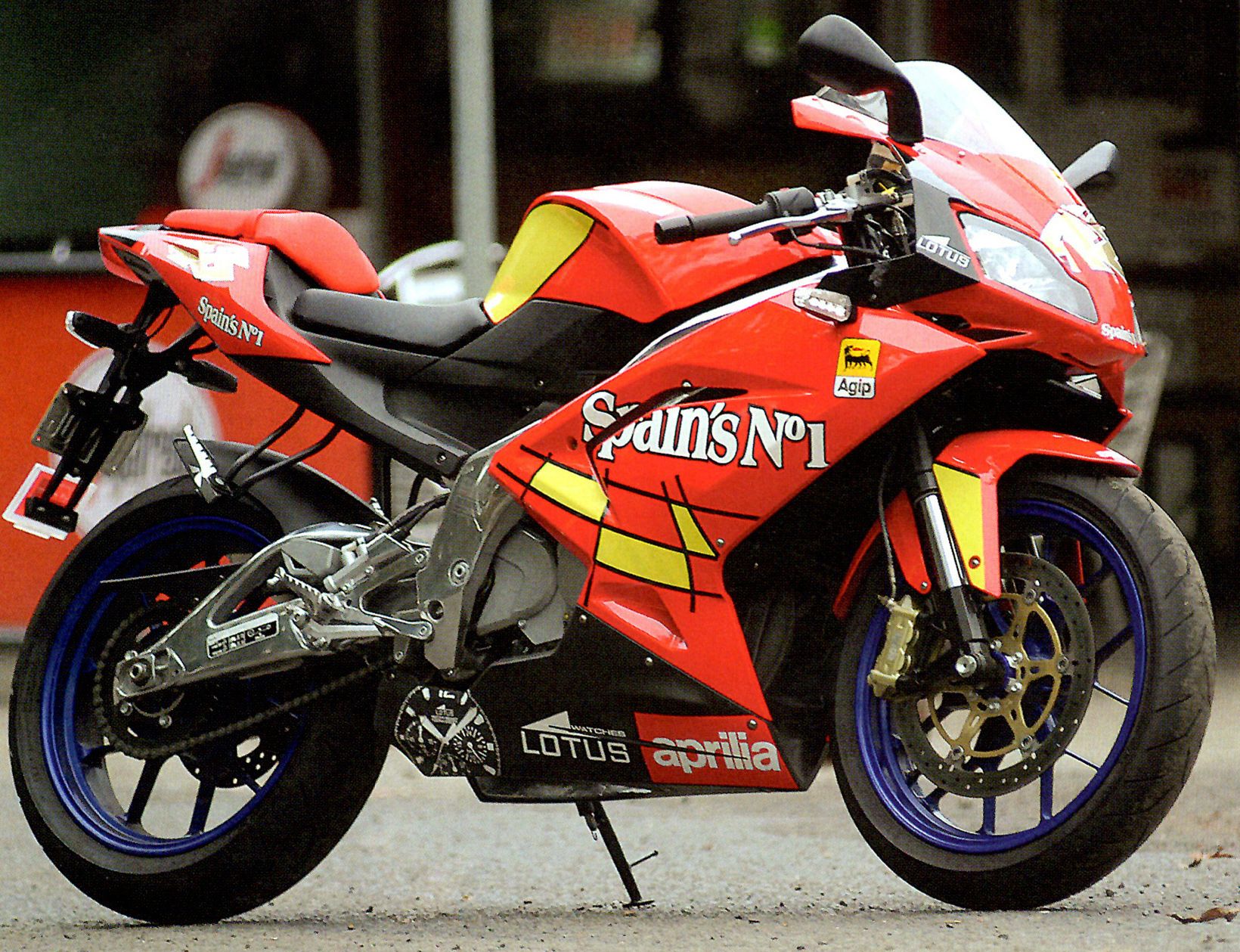 Simon tested the bike when it came out, so did I, and I’m currently looking to buy one to restore.

The race bike traits of the RS125 have shown it to be a terrific training device for aspiring racers as well as an object of desire. Irrespective of racing, the RS125 will help your riding and provide you with sweet bliss for a caning over twisty bitumen – what a top little bike! 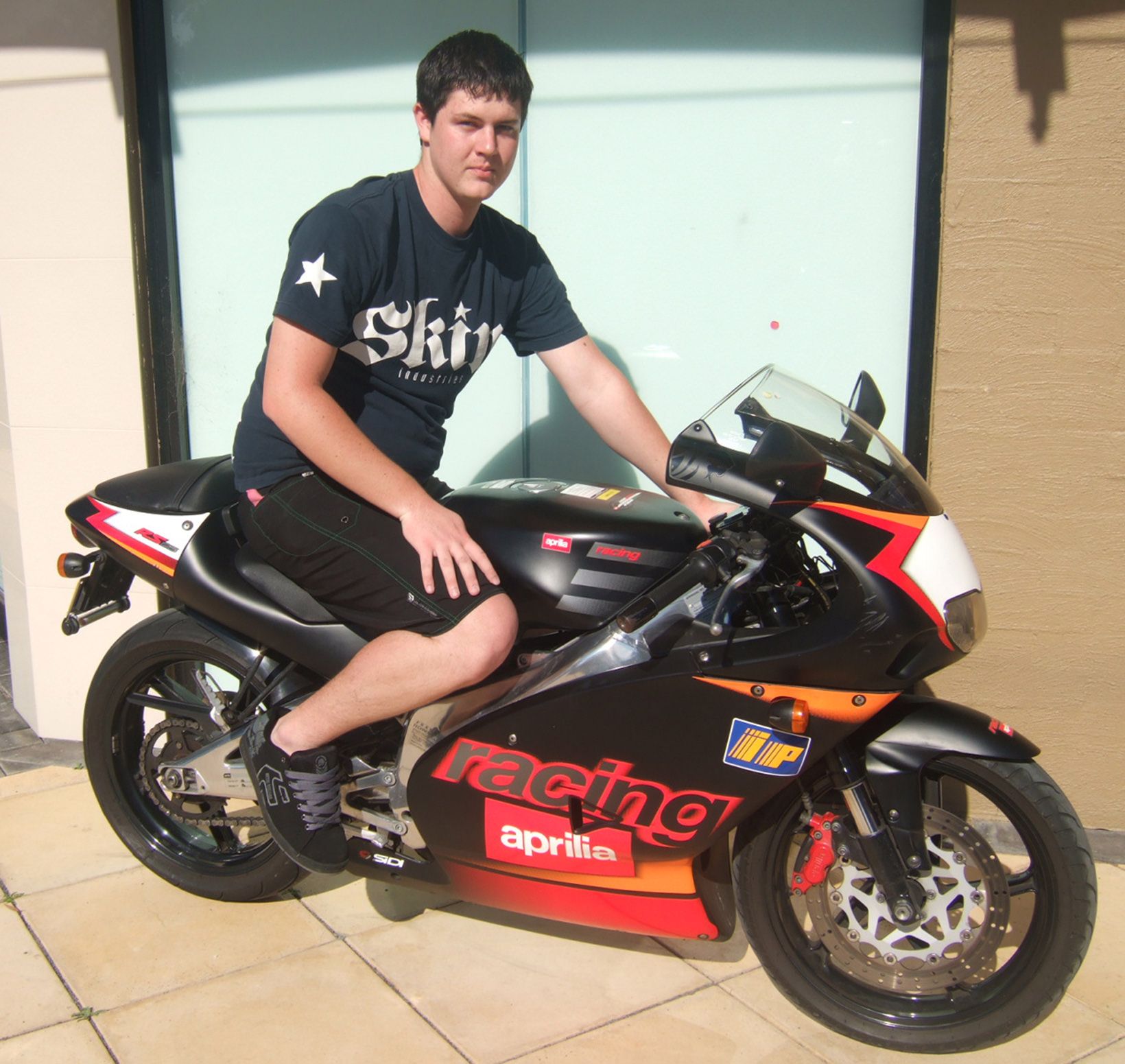 “I have always liked Italian bikes and wanted an RS250 for my Ls but when I found out they weren’t learner legal I went with the 125.”

OWNERS EXPERIENCE – Matt Lowe…
The Aprilia RS125 was produced for 18-years. Being a two-stroke, the RS125 is already in a different league to most sportsbikes. And with only around 30-horsepower on tap in unrestricted form, you won’t be getting any third gear power wheelies. What you get from an RS125 is handling that comes straight from the GP racer, top quality brakes and suspension and the joy of smoking bikes nearly four times its size in the twisties. 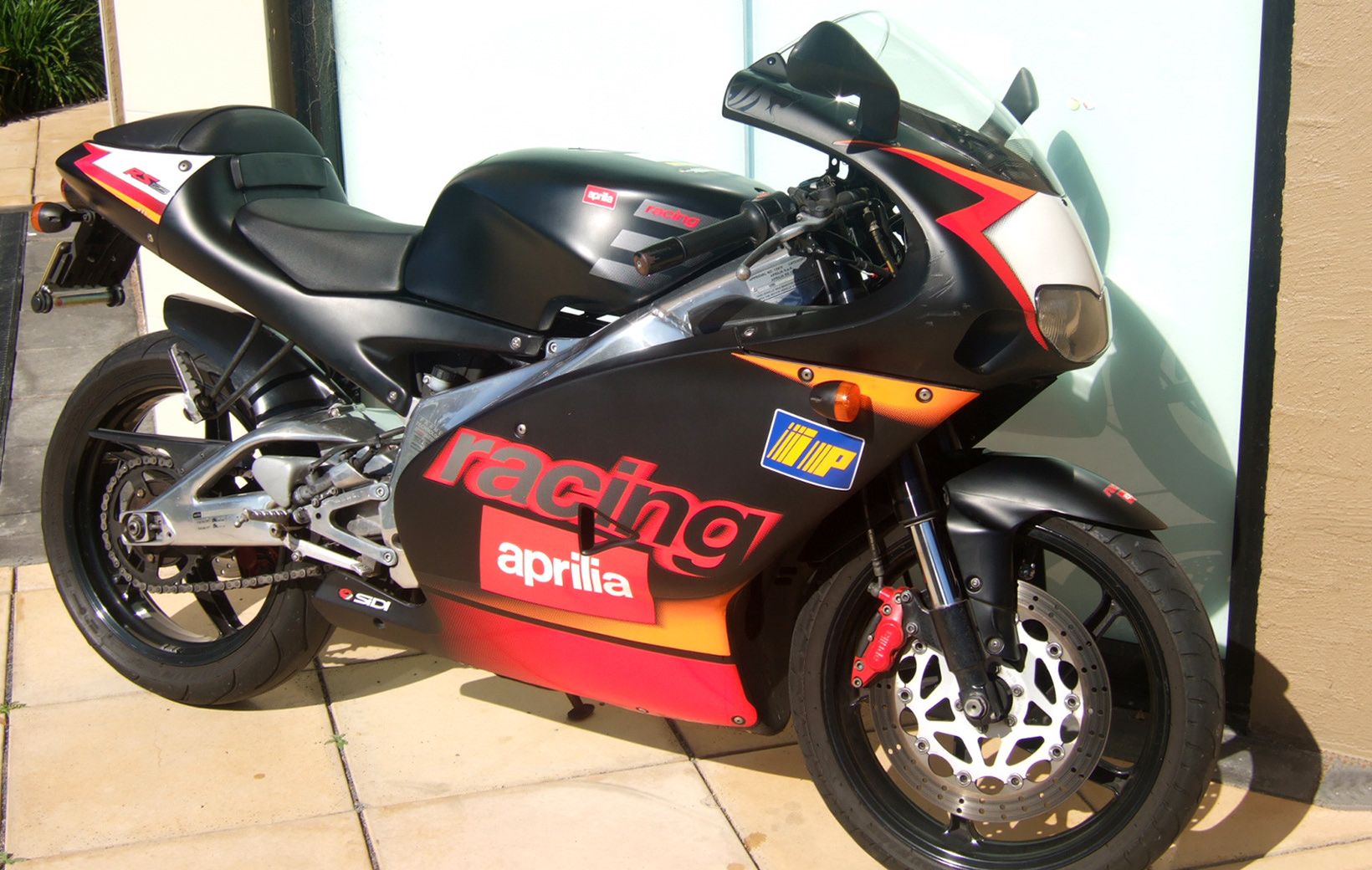 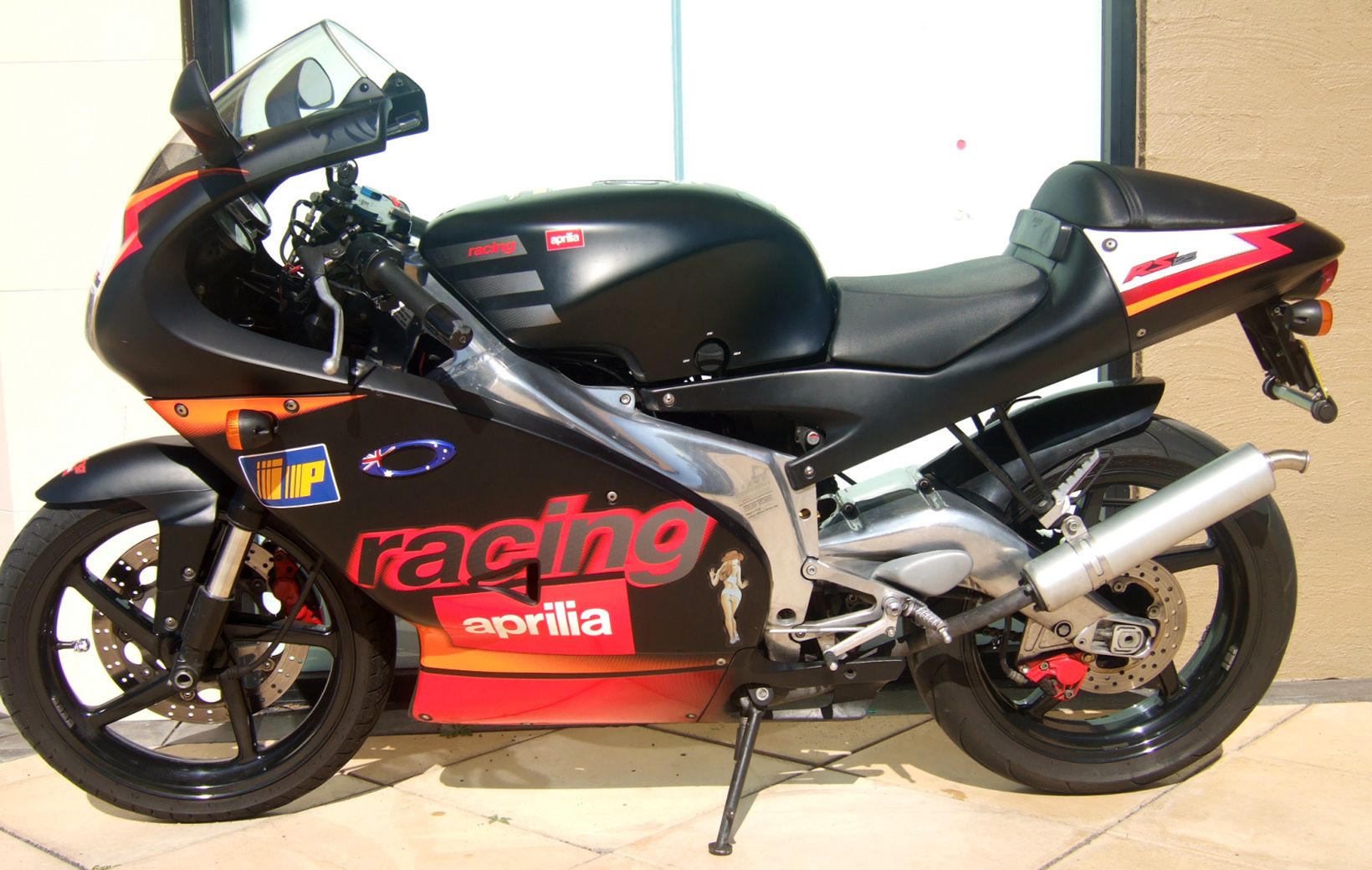 The only issue the owner had was an oil pump failure, which is a big issue and caused a top-end seizure.

“I have always liked Italian bikes and wanted an RS250 for my Ls but when I found out they weren’t learner legal I went with the 125,” says Matt.

During Matt’s tenure with the machine, he experienced the joy of embarrassing higher capacity riders but also the pain of having the top-end lunch itself on the freeway. 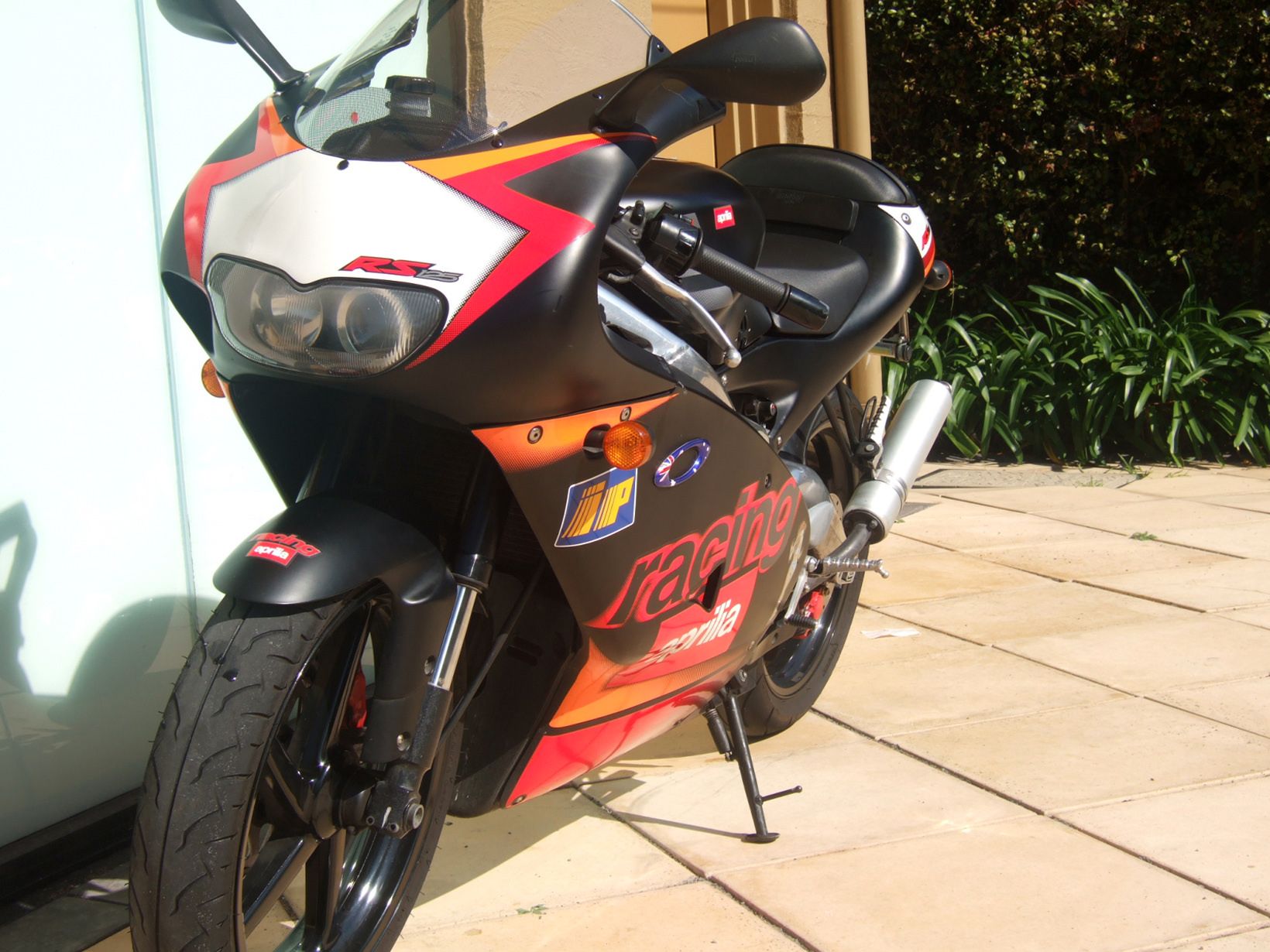 The Tetsuya Harada replica was one of the best looking and is one of the most collectable these days.

“I was on my way home from work and the oil pump failed, which caused the engine to overheat and seize at 120km/h.

Matt also noted that being a two-stroke, the RS125 can be prone to vibration and he’s lost a few bolts along the way, not to mention his ‘bars rattling themselves loose. 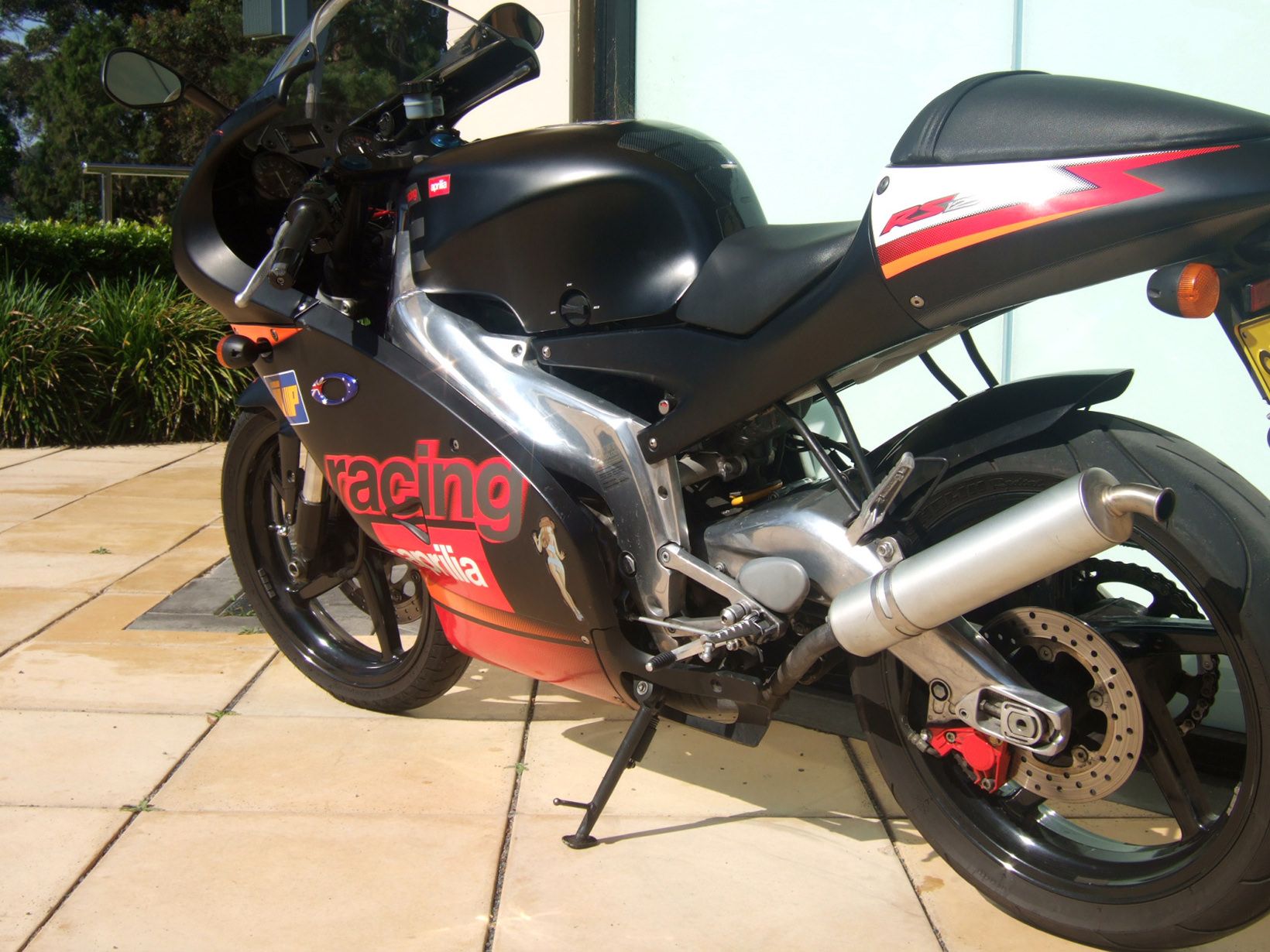 The RS125 loves maintenance and good quality oil. One of the main things with any two-stroke is to let them warm up over a couple of minutes or they will seize, which as Matt has described, is not a heap of fun… 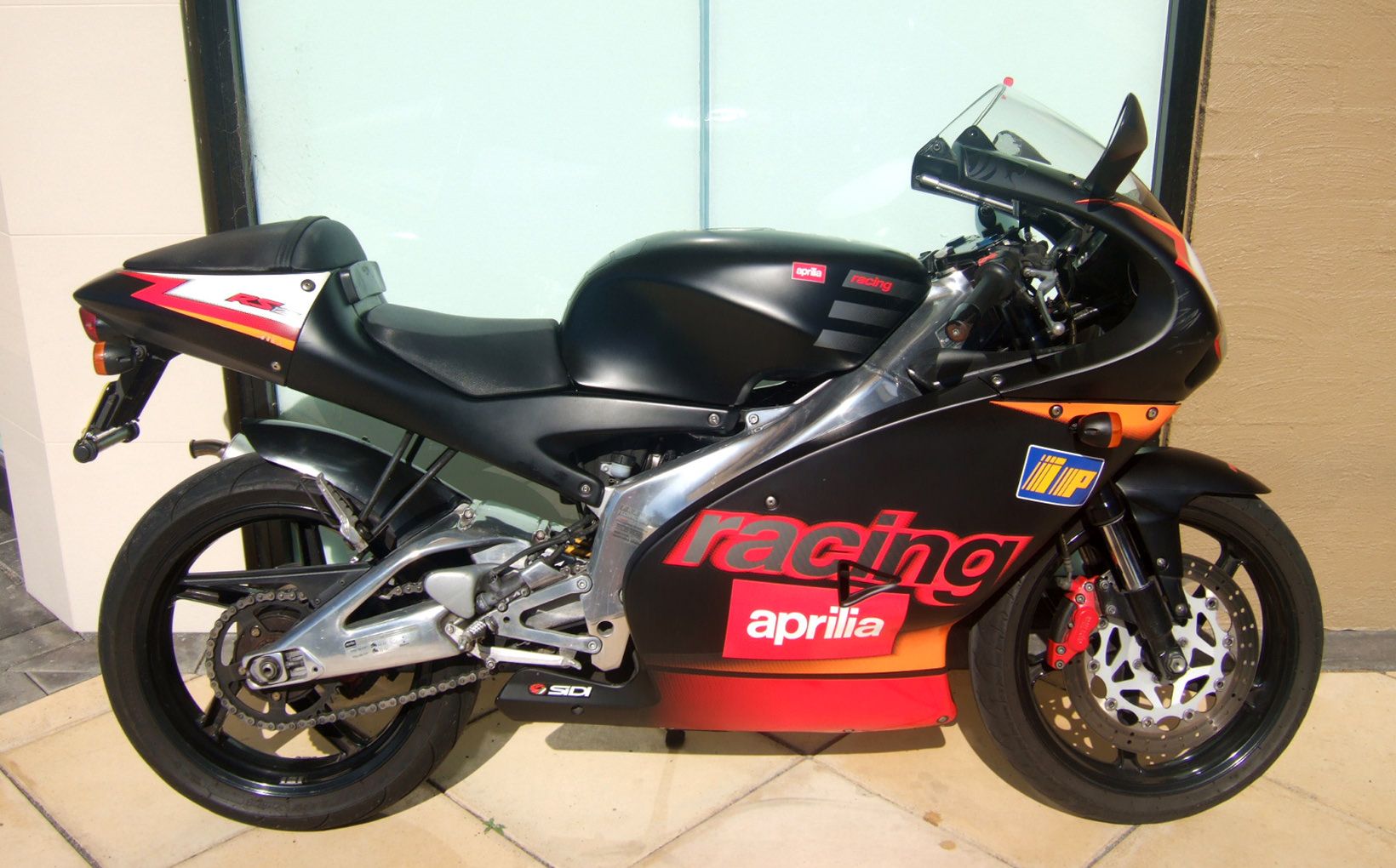 BAD POINTS: Engine can be fragile if not looked after, cold starts, expensive to rebuild and run, spares, crashed bikes common.