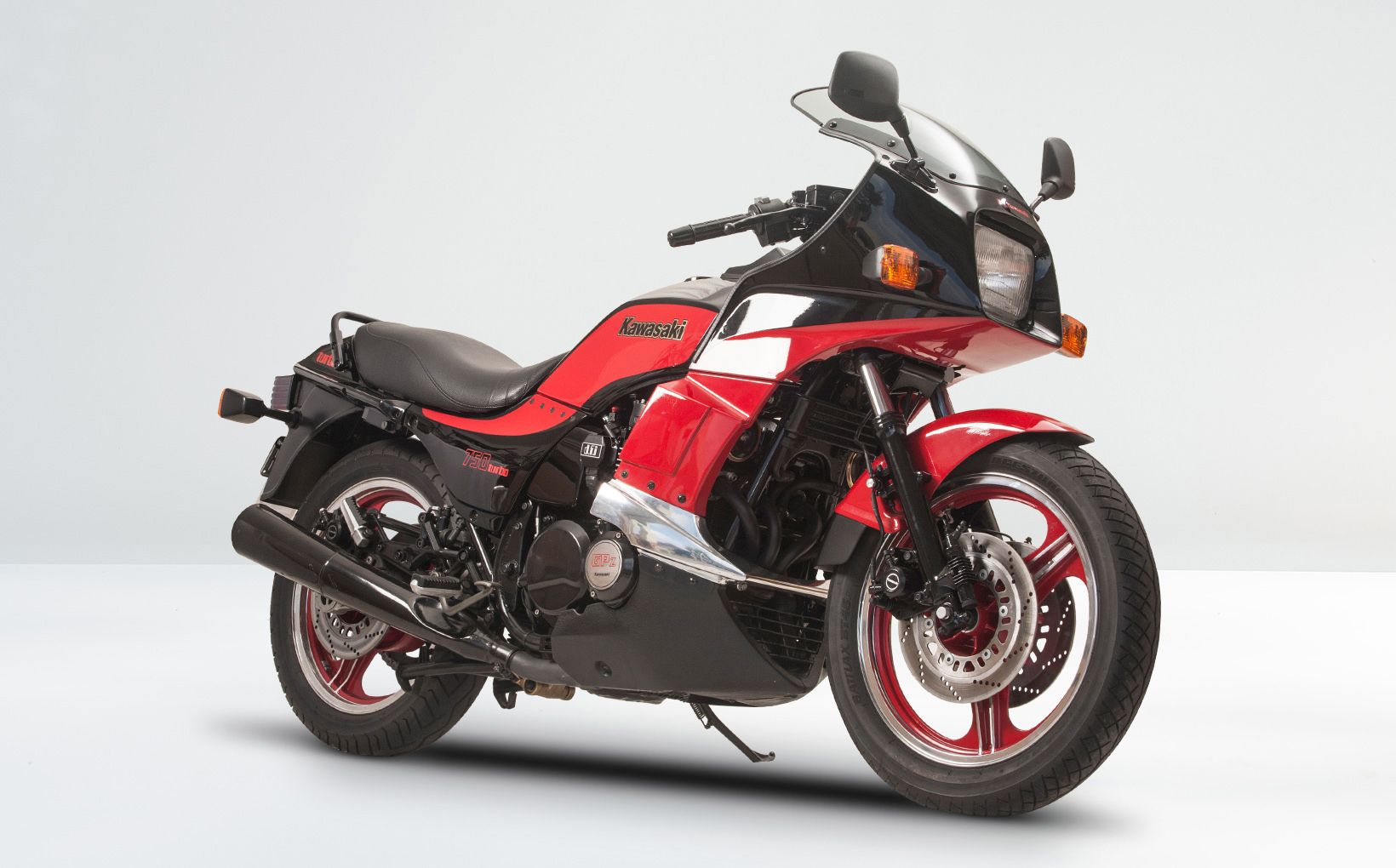 The name Mark Rees has appeared online and in print many times. The popular Victorian bike restorer, mechanic and founding member of the Classic and Custom Japanese Motorcycle Club built some stunning feature bikes. This GPz750, finished a decade ago this year, was set aside for his sons after Mark sadly passed away in 2013 aged just 40… 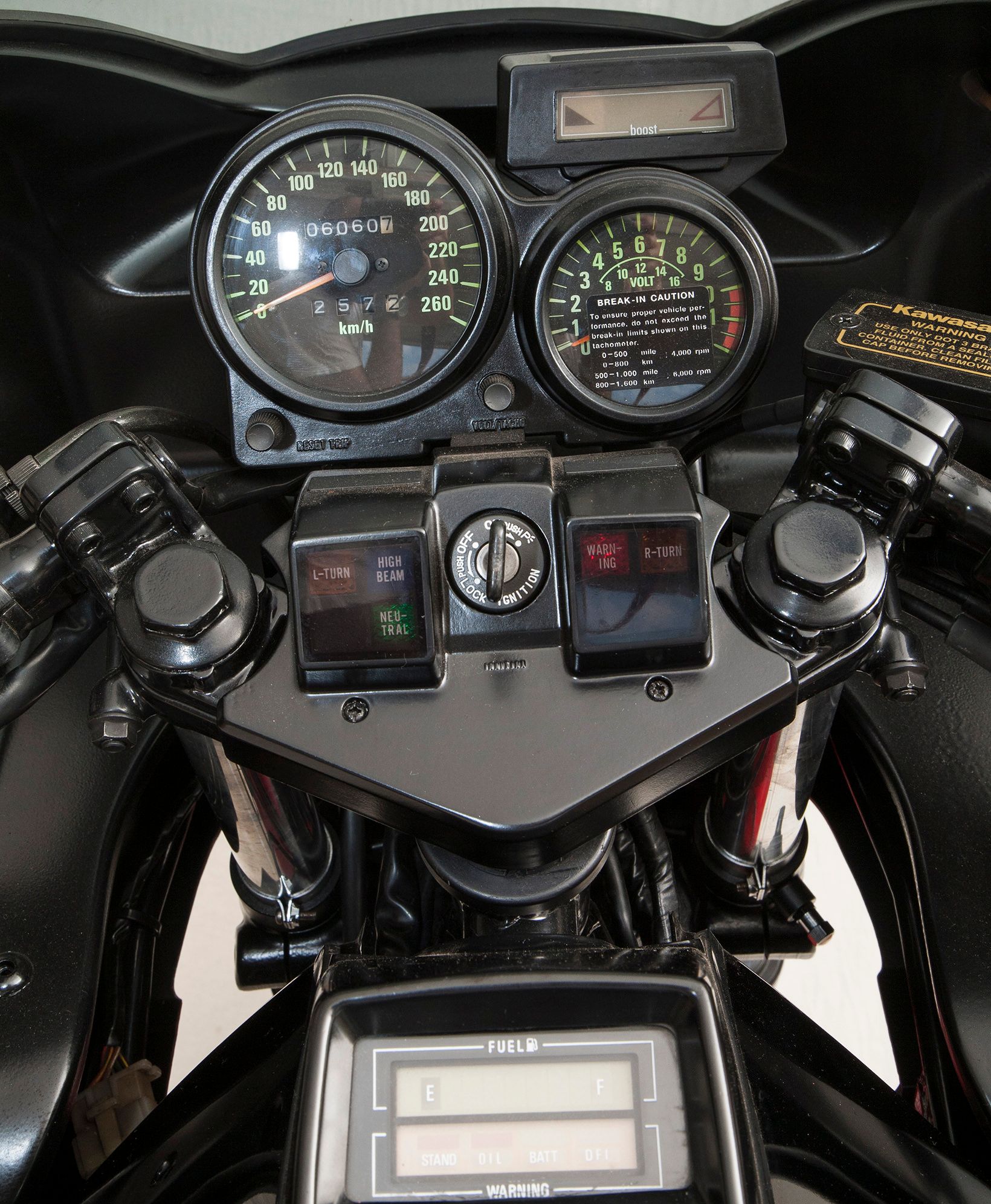 How retro Night Rider can you get with that dash layout!

I originally published this in Retrobike, however, I recently stumbled across it and realised this, a decade on having been restored in 2012, along with Mark’s other bikes we featured over the years, need to be re-published online for all to see. The man was so talented… We hope the bikes are still around… 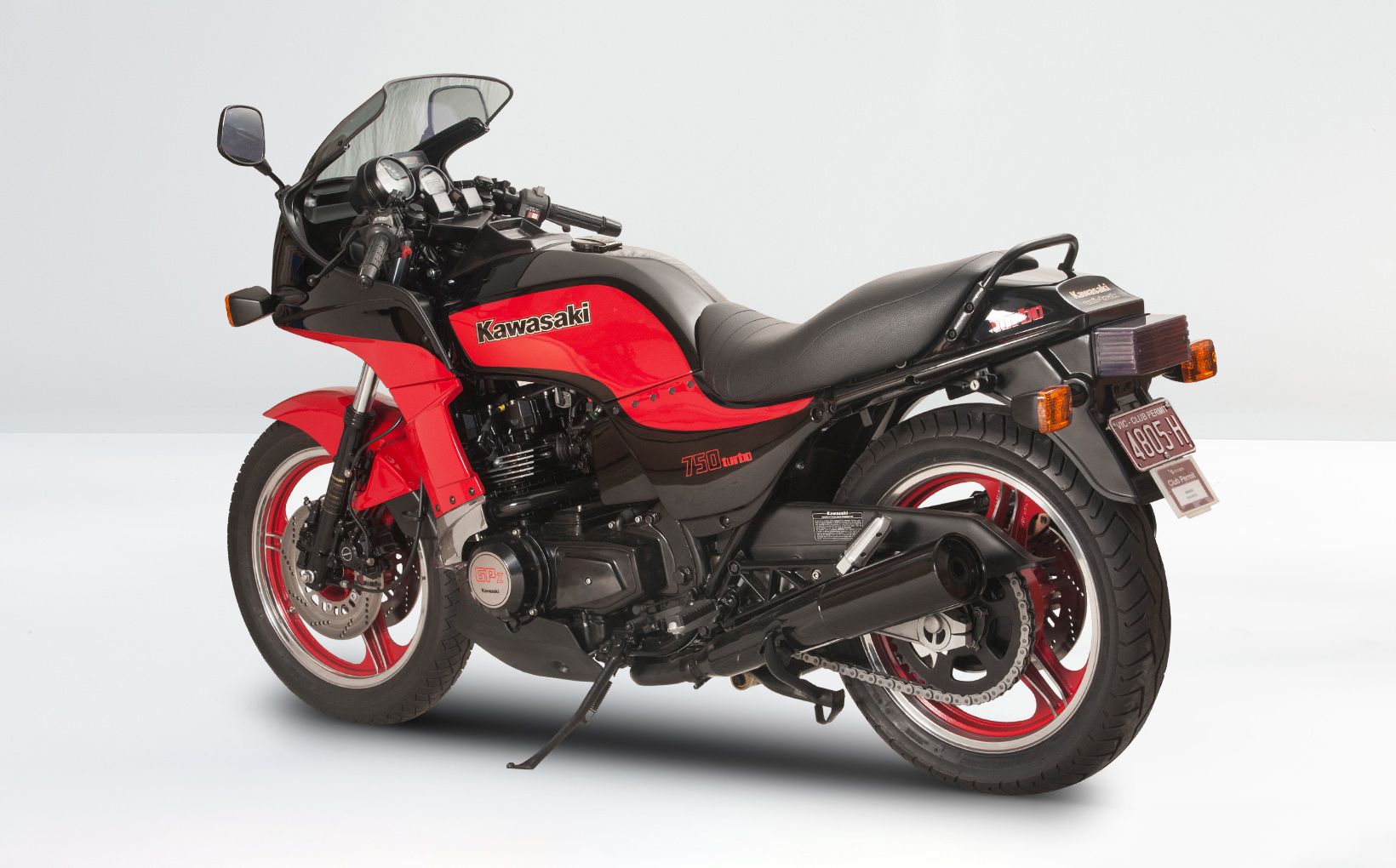 The forks were rebuilt, shock original and good.

The GPz started life as what can best be described as a wreck that had been fitted with nitrous oxide injection. Mark had wanted to own a turbocharged bike again and the GPz750 seemed the best choice, given his passion for the era and the fond memories he had of his previous GPz750 Turbo, so after a long hard search for the right donor bike of around 12-months, this particular example was located and picked up for the right price. He bought the bike from a mate, Phil Watkins. 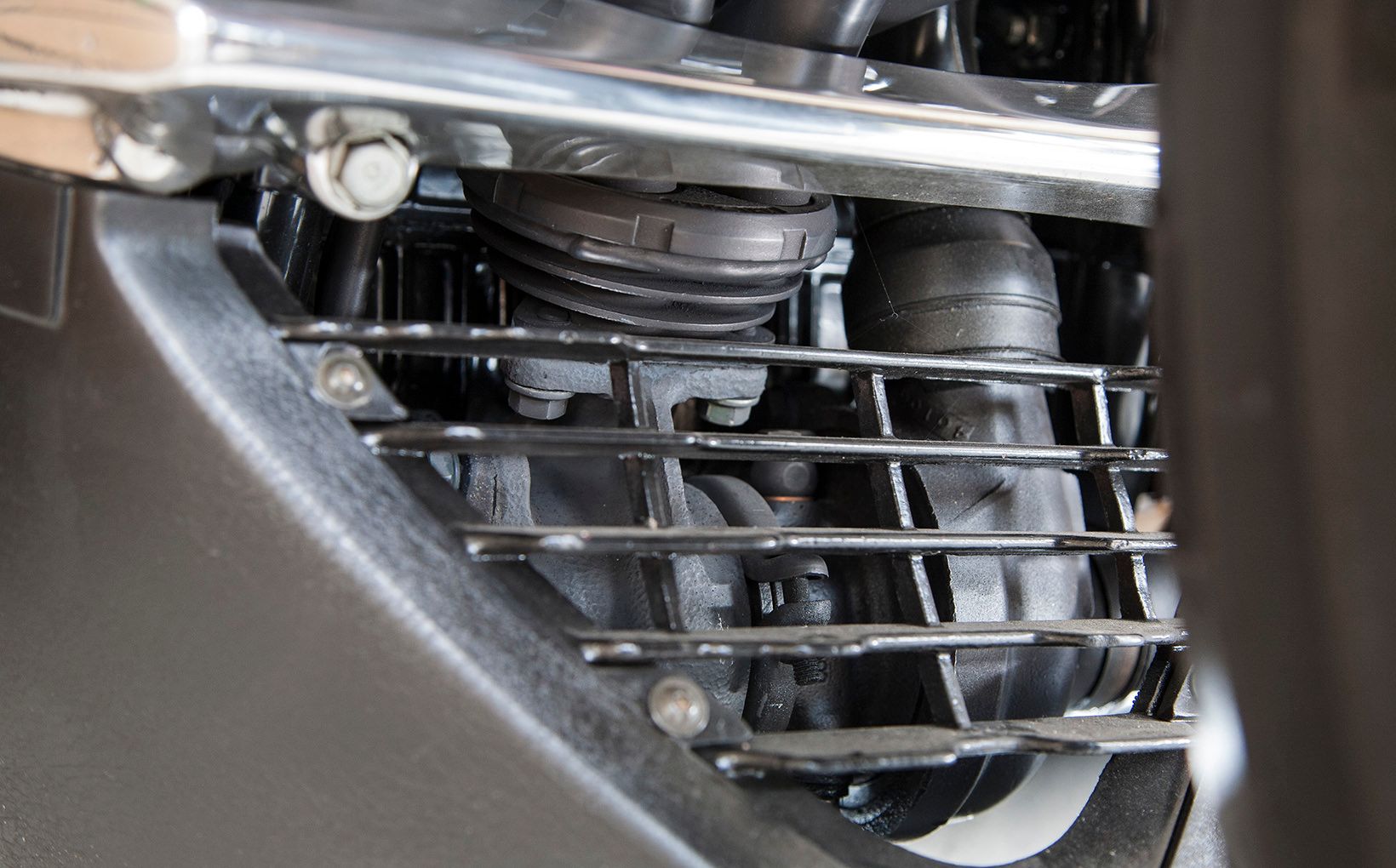 The original turbo was in perfect working order.

The GPz was completely stripped, and the engine rebuild was the first job. Mark completely stripped and rebuilt the 750 engine to stock spec. The 7.8:1 low comp pistons, and 66mm bore were retained; the stock crankshaft, conrods, new stock rings and main bearings were also fitted. Original camshafts, valves and porting are retained, with no metal removed from the head. A new camchain was fitted as a matter of caution. In the bottom end, the cases were blasted and cleaned up (as was the top end when disassembled) in prep for painting. The original five-speed gearbox was fine so I went back in, and the standard original clutch was retained with new plates. 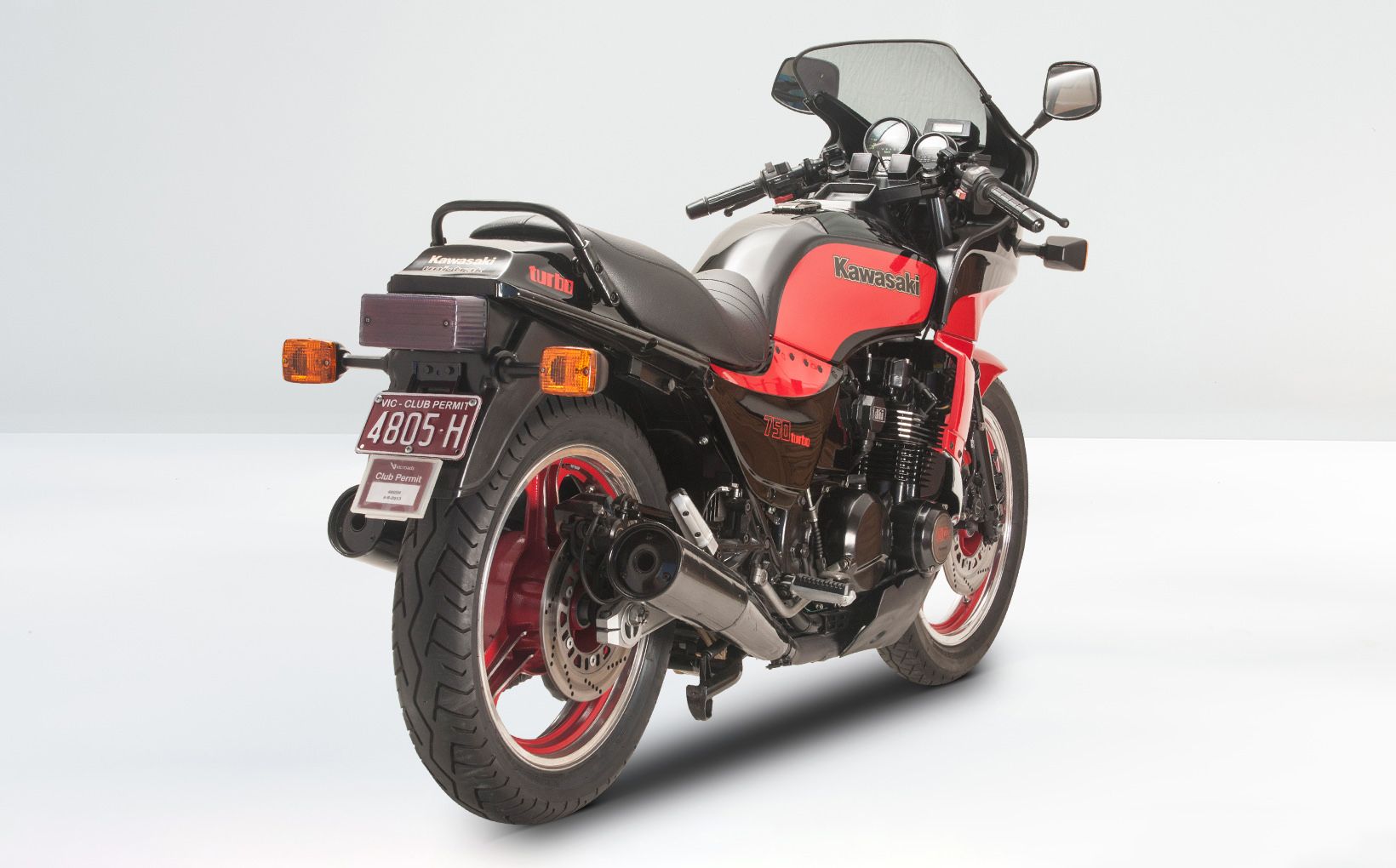 Being a very talented bike restorer, Mark did a perfect job. 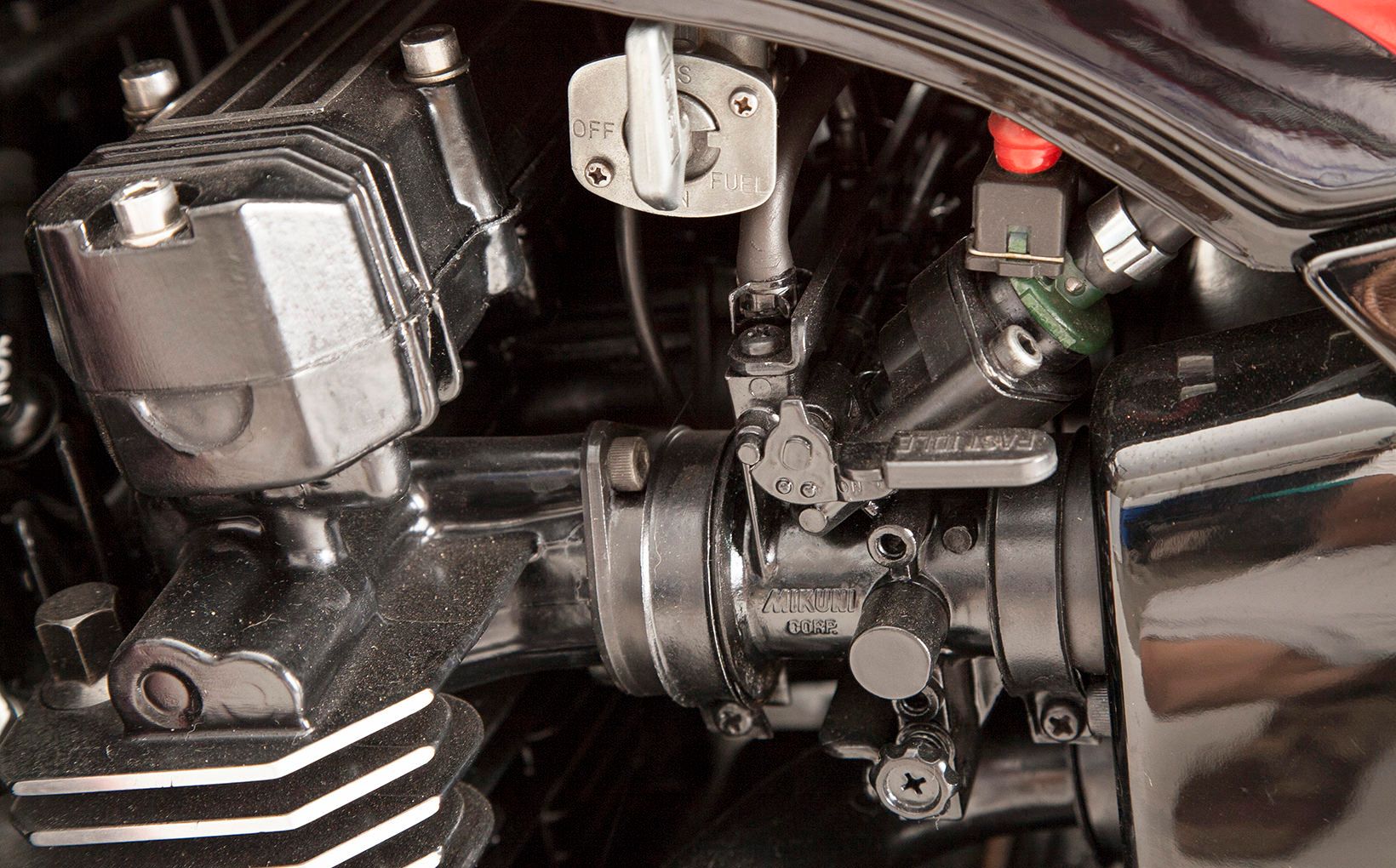 The fuel and ignition systems are completely original with the Kawasaki fuel injection system and original Hitachi turbocharger in fine working order. The wiring loom required a tidy up and a new airfilter went in.

With the power side of the restoration under control, Mark turned his attention to the chassis. 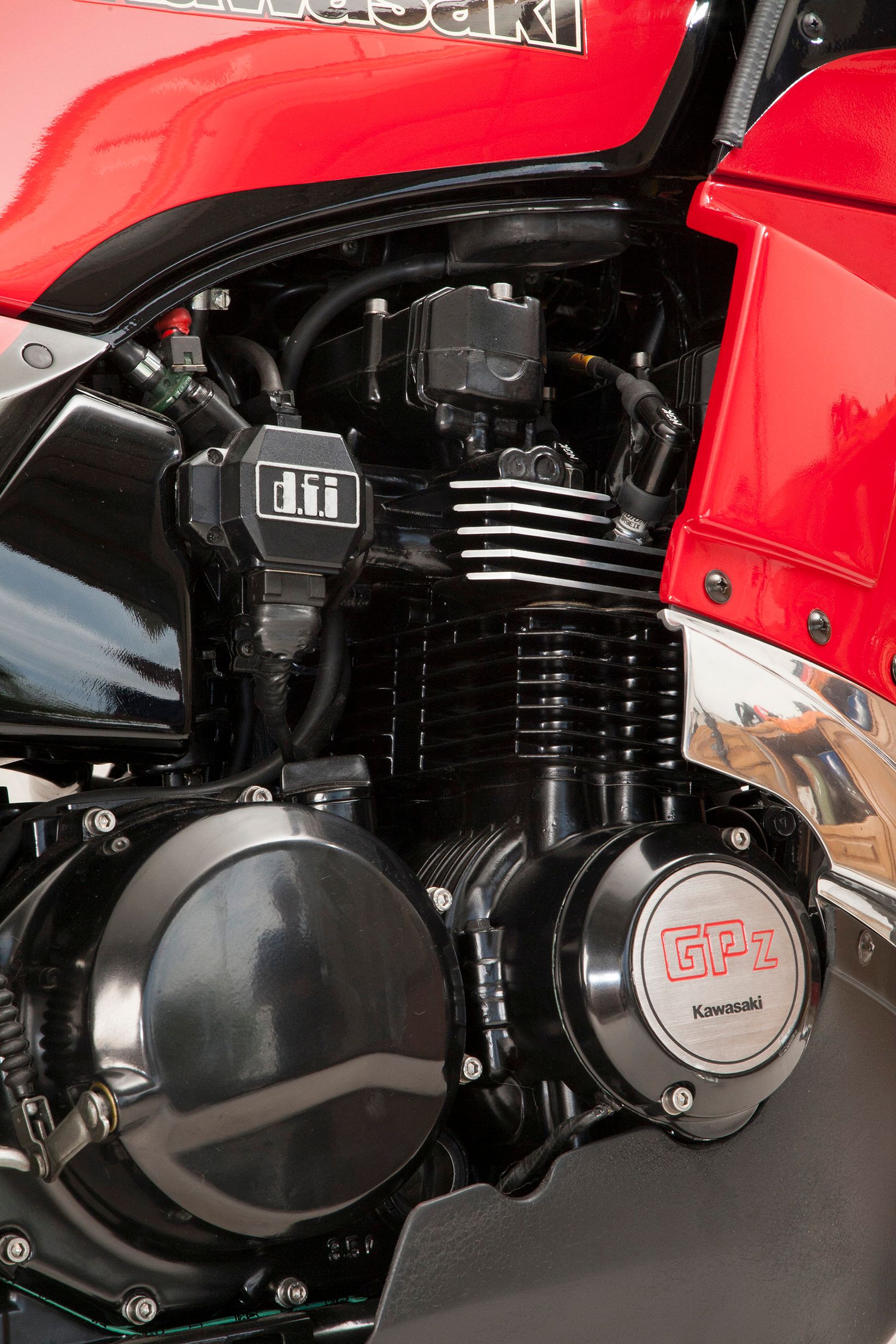 The engine was completely stripped and rebuilt.

The frame was completely stripped bare as all bearings and seals were to be replaced. It was then shipped off to be powedercoated. A few issues arose here as when the frame was powdercoated the powder coater used an oven to burn the old paint off and this was done with the frame lying on its side, which caused the frame to twist out of shape. This was not discovered until the engine went in later in the resto and caused a few minor dramas, however, the frame was straightened at minimum cost. 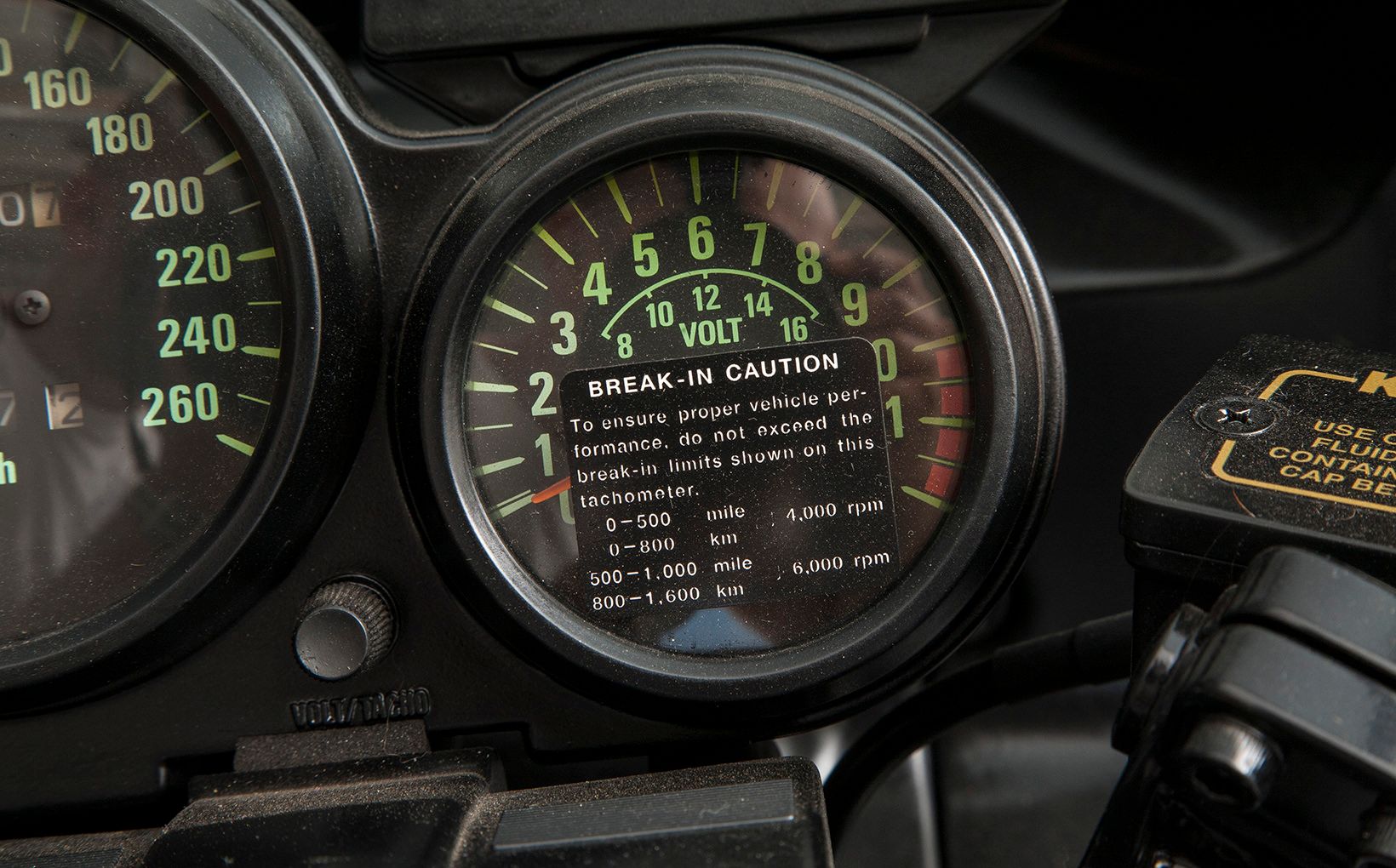 So original and cool. 260km/h top speed is classic!

The standard alloy swingarm was polished up and refitted using new swingarm bearings, bushes and seals as well as a polished up swingarm shaft. The original triple-clamps were fitting with new steering-head bearings also. 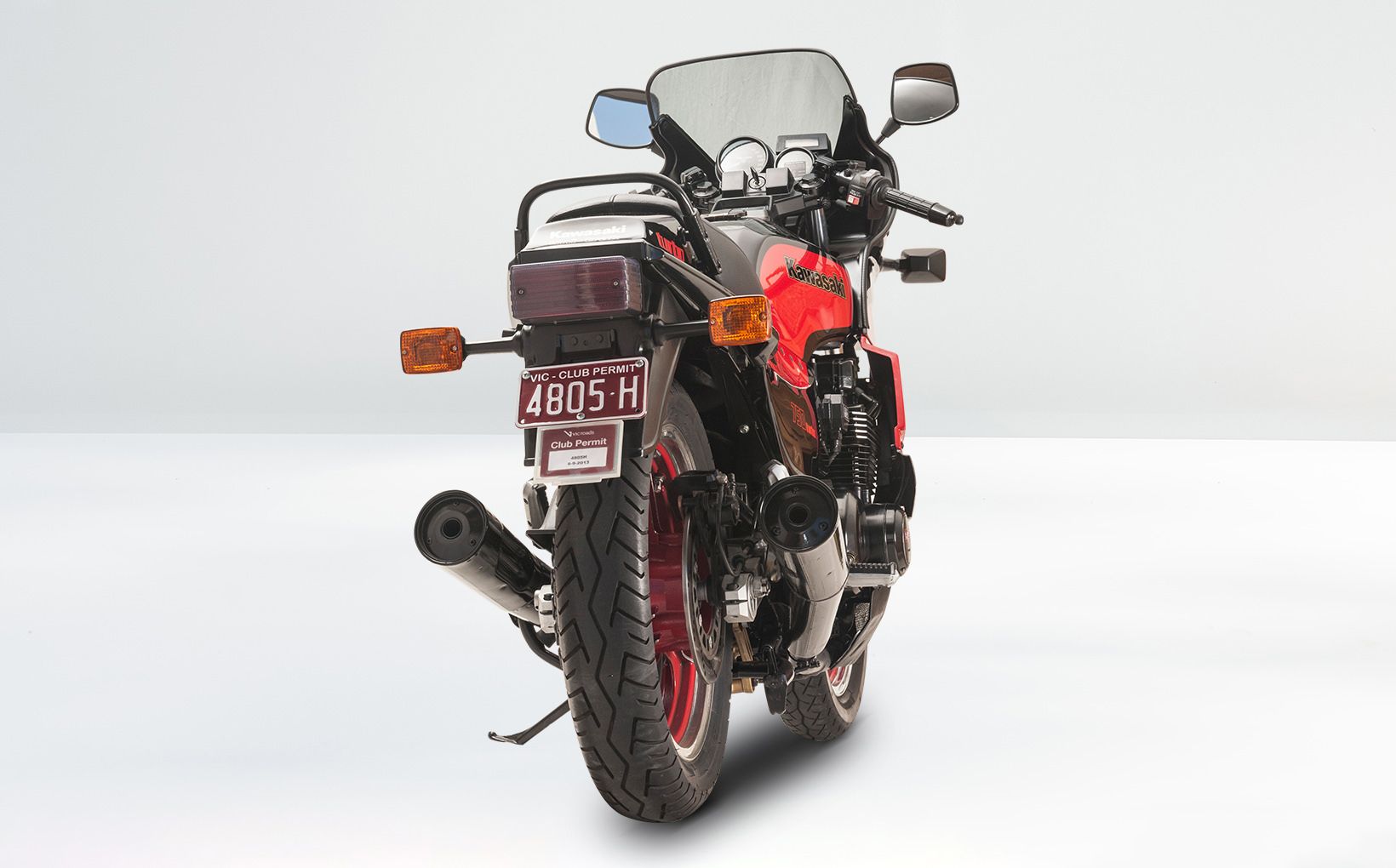 The frame was twisted during powdercoating and had to be repaired.

The original 37mm air adjustable forks were stripped and rebuilt then refitted to the clamps up front, while at the back-end Mark refitted the original shock, a rare example in good working order. The standard wheels were stripped and repainted back to new and once new wheel bearings went in and the restored rotors were fitted the bike was suddenly a rolling chassis again. 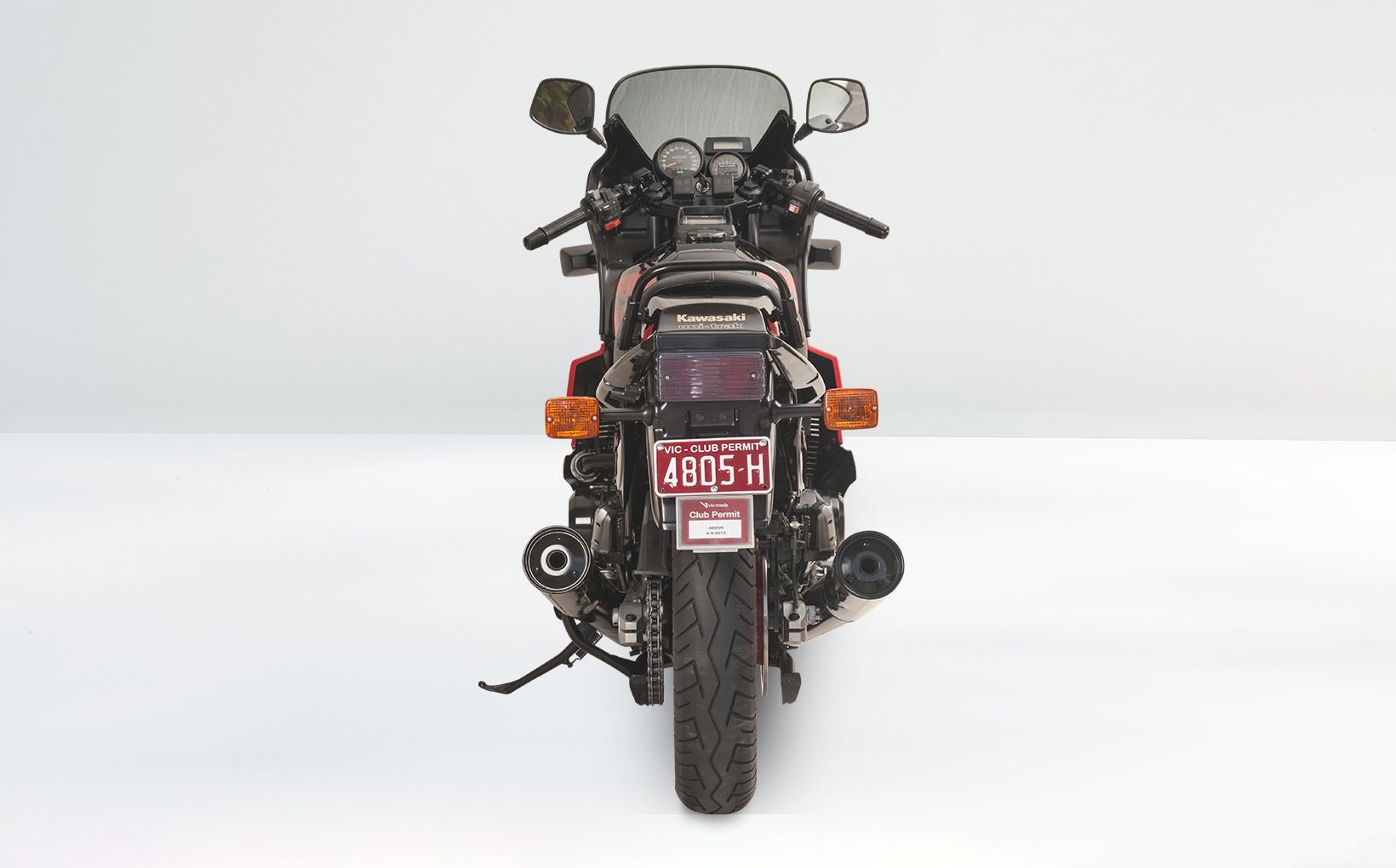 Mark rode the bike a few times then stored it for the future.

This is when the hard job of lots of small details begin, with things like handlebars, rearsets, various brackets and so forth all requiring stripping and repainting or polishing back to original finish. No easy task but as the pictures tell us, Mark was a perfectionist… 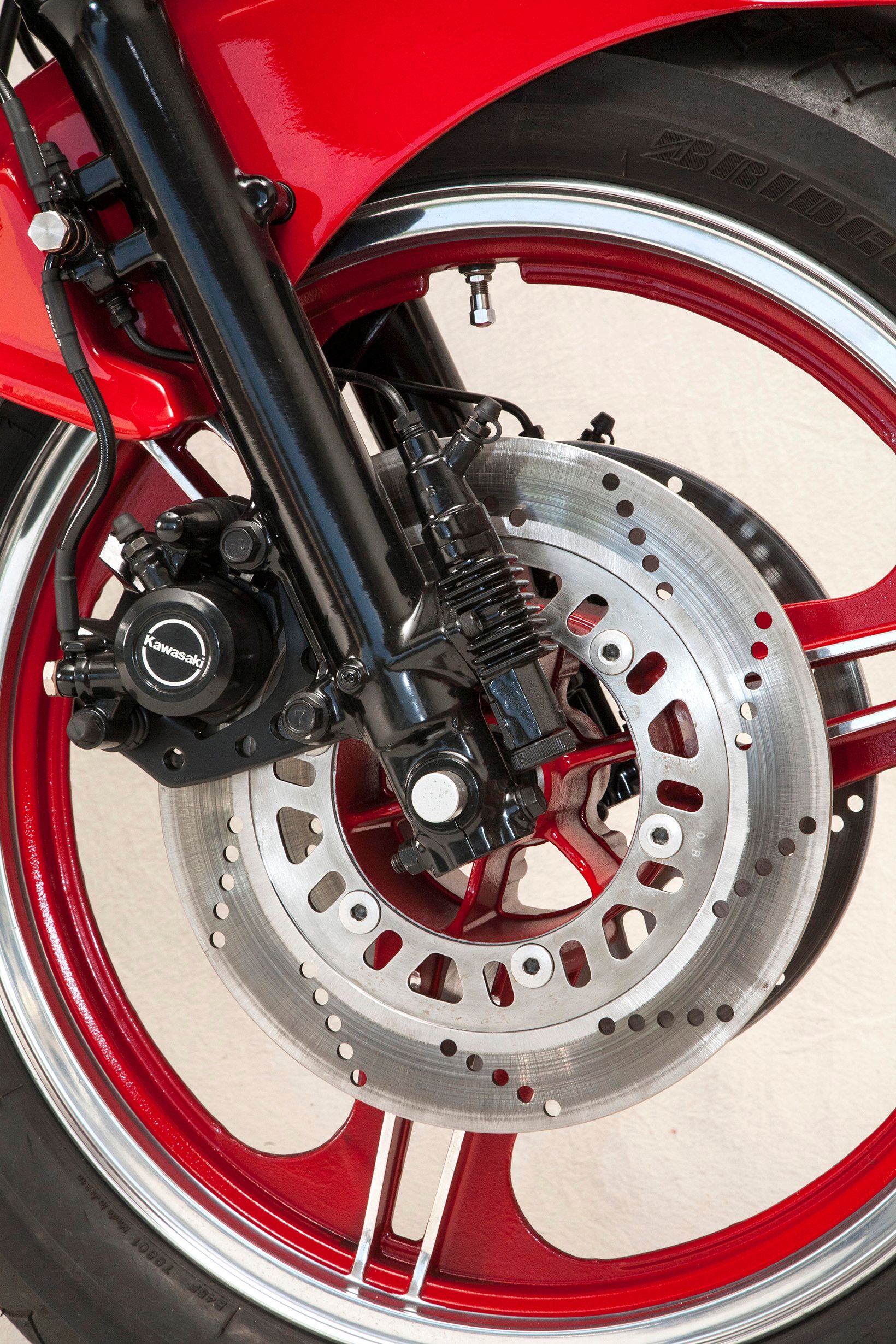 Tiny front rotors, particularly for an 18in wheel. Seriously good resto job on them though. 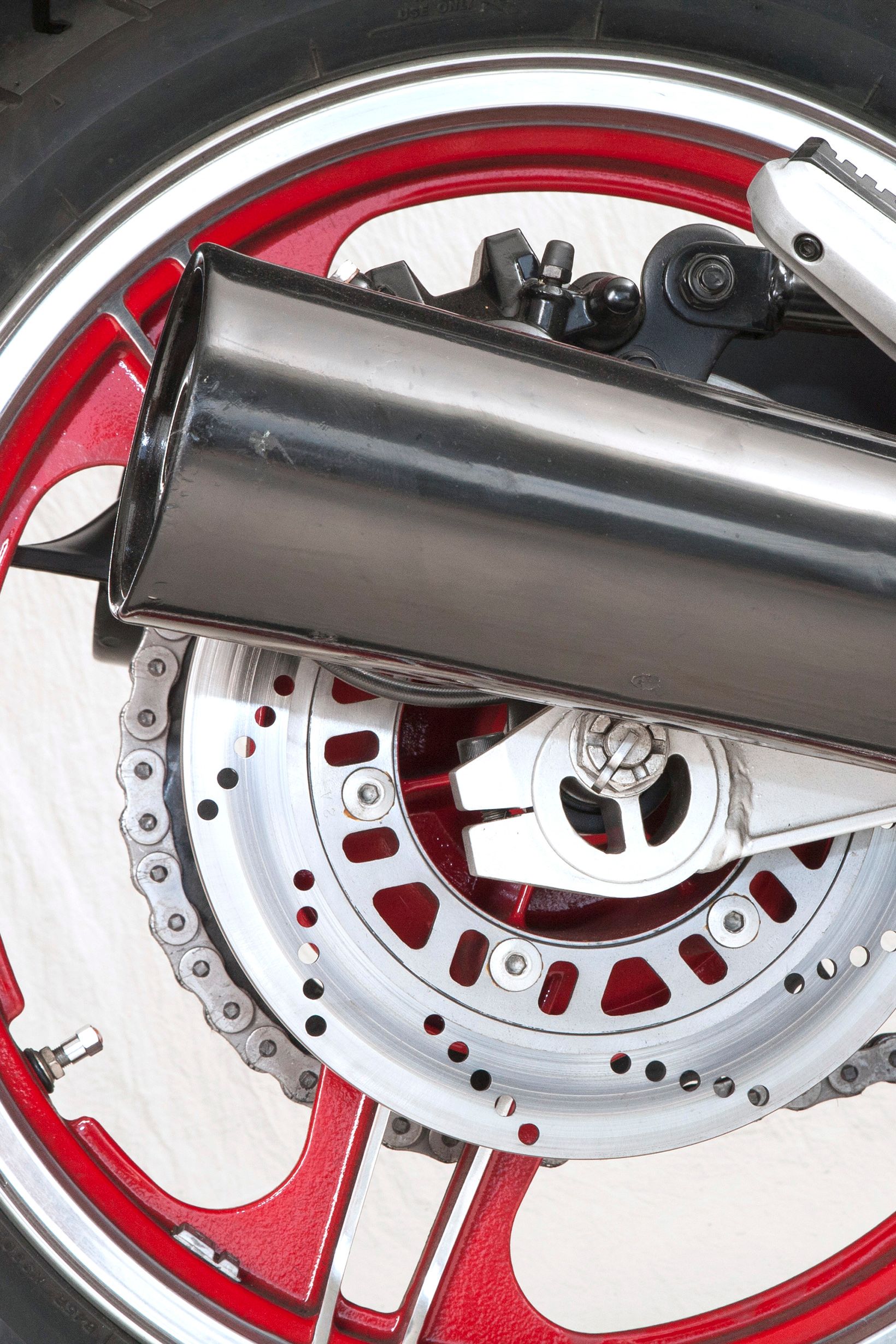 The OEM brakes went on, also, of course, completely restored and following this the now new looking and freshly rebuilt engine went in. Mark sourced a new OEM exhaust system for the bike locally and that was brought back to mint condition and fitted, then the electrics and turbo system went on – every nut, bolt, bracket, wire or plug carefully restored to new condition.

The bodywork was sent to Jeff Hill who painted the bike back to exact original colours and fresh decals were applied to set off that as new look that Mark was after. 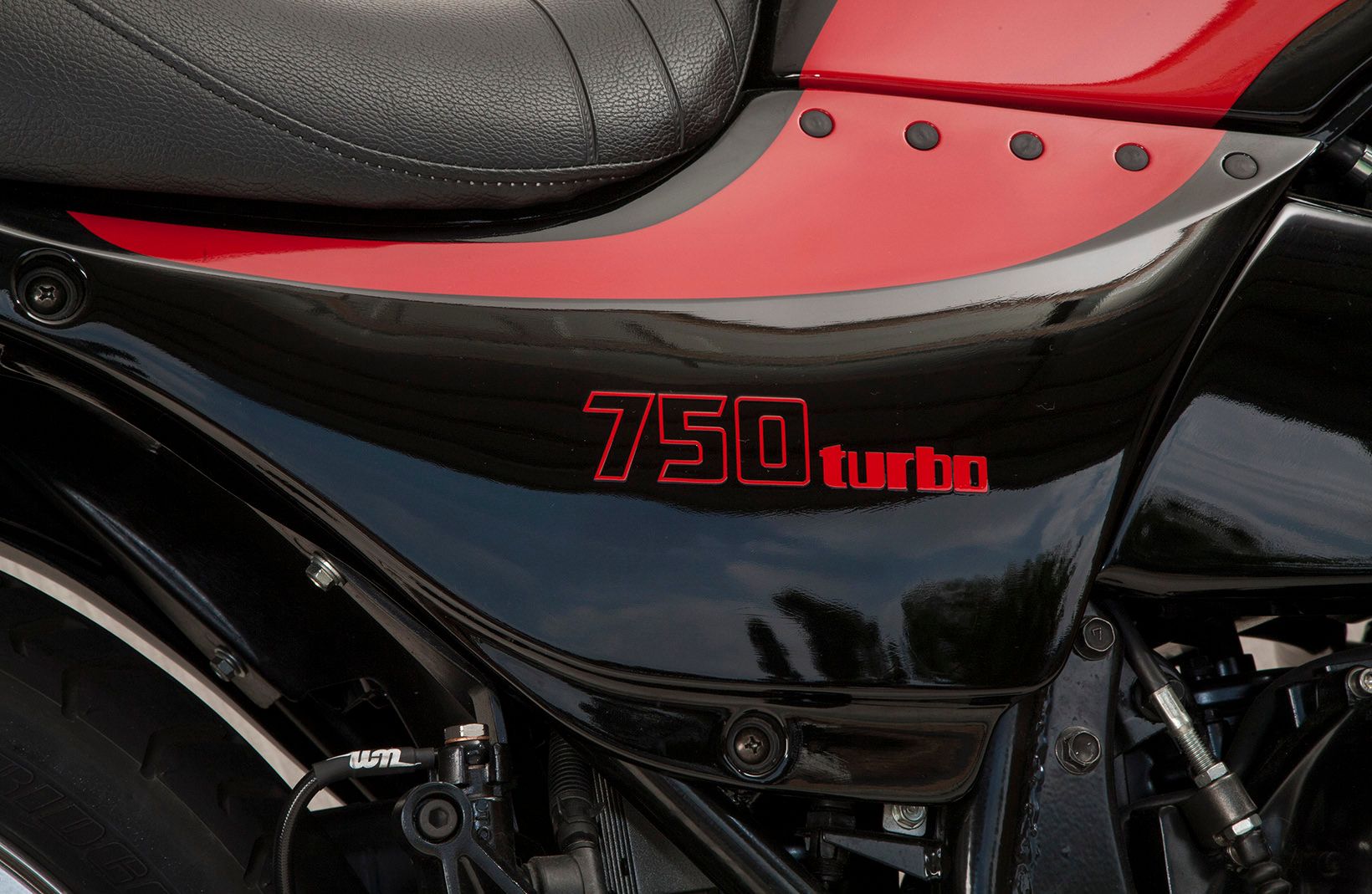 The end result was a stunning GPz750 Turbo that Mark enjoyed a few rides on late in 2012 before parking the bike in the name of safekeeping. 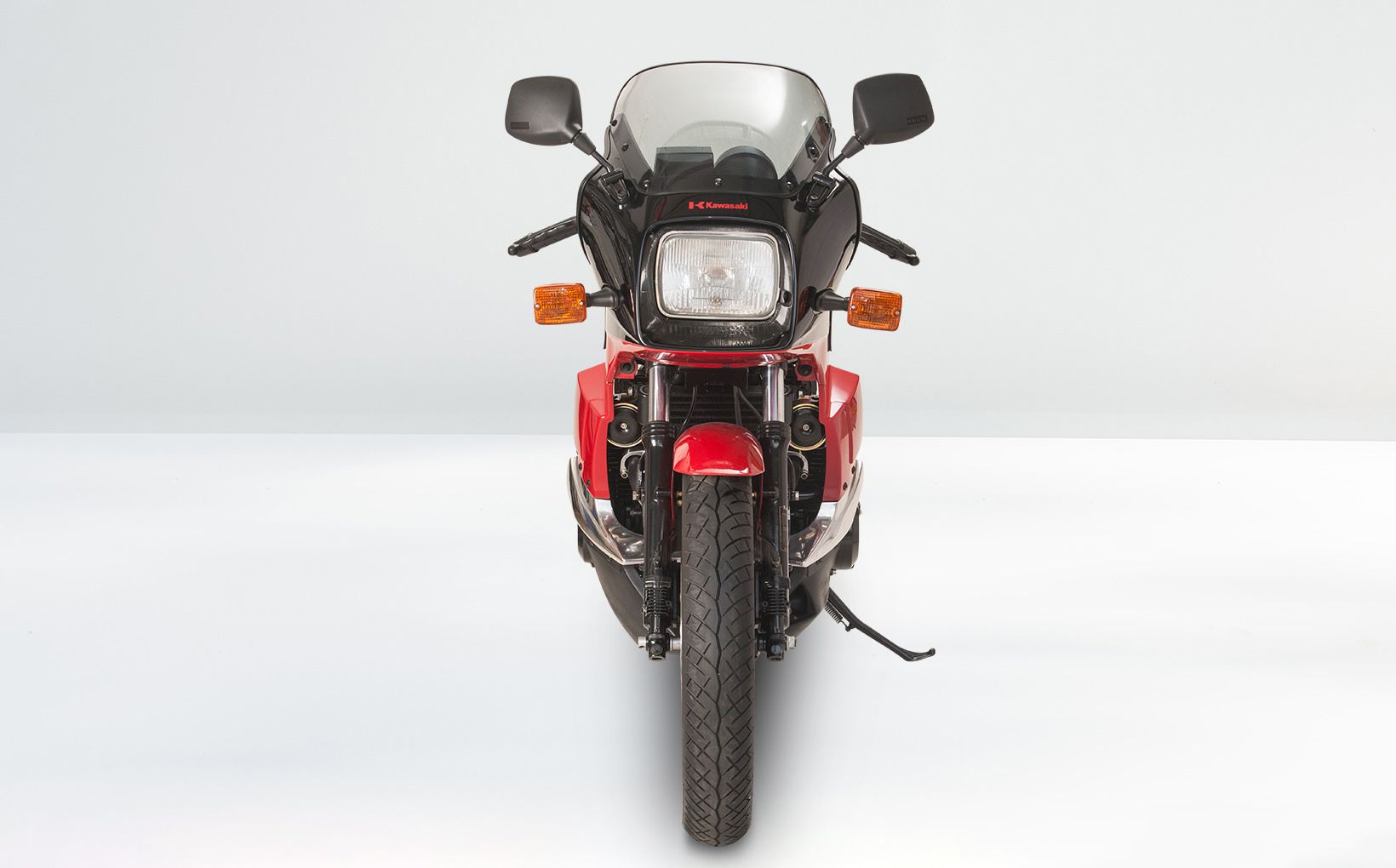 Next we will look at the Monkey Bike Mark built, then the Kwaka Zed…