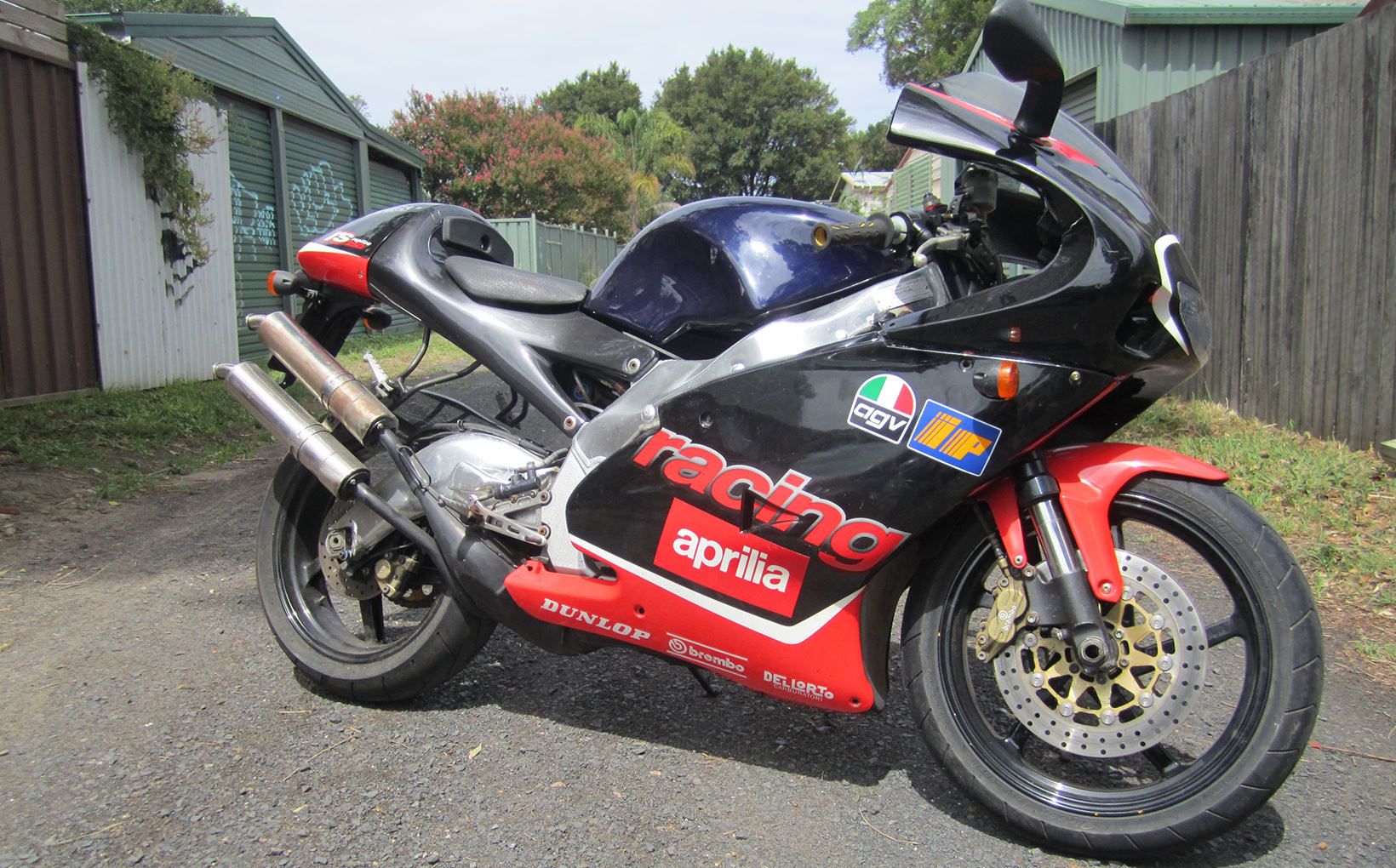 In late 1999 early 2000 Heather and I were living day to day in Sydney, me a bike courier trying to get a start in moto journalism, and Heather working mundane city office job. We were so young and only really thought about three things: What to drink that night, when we were getting paid next, and how long until we can get that elusive RS250 we were dreaming about… 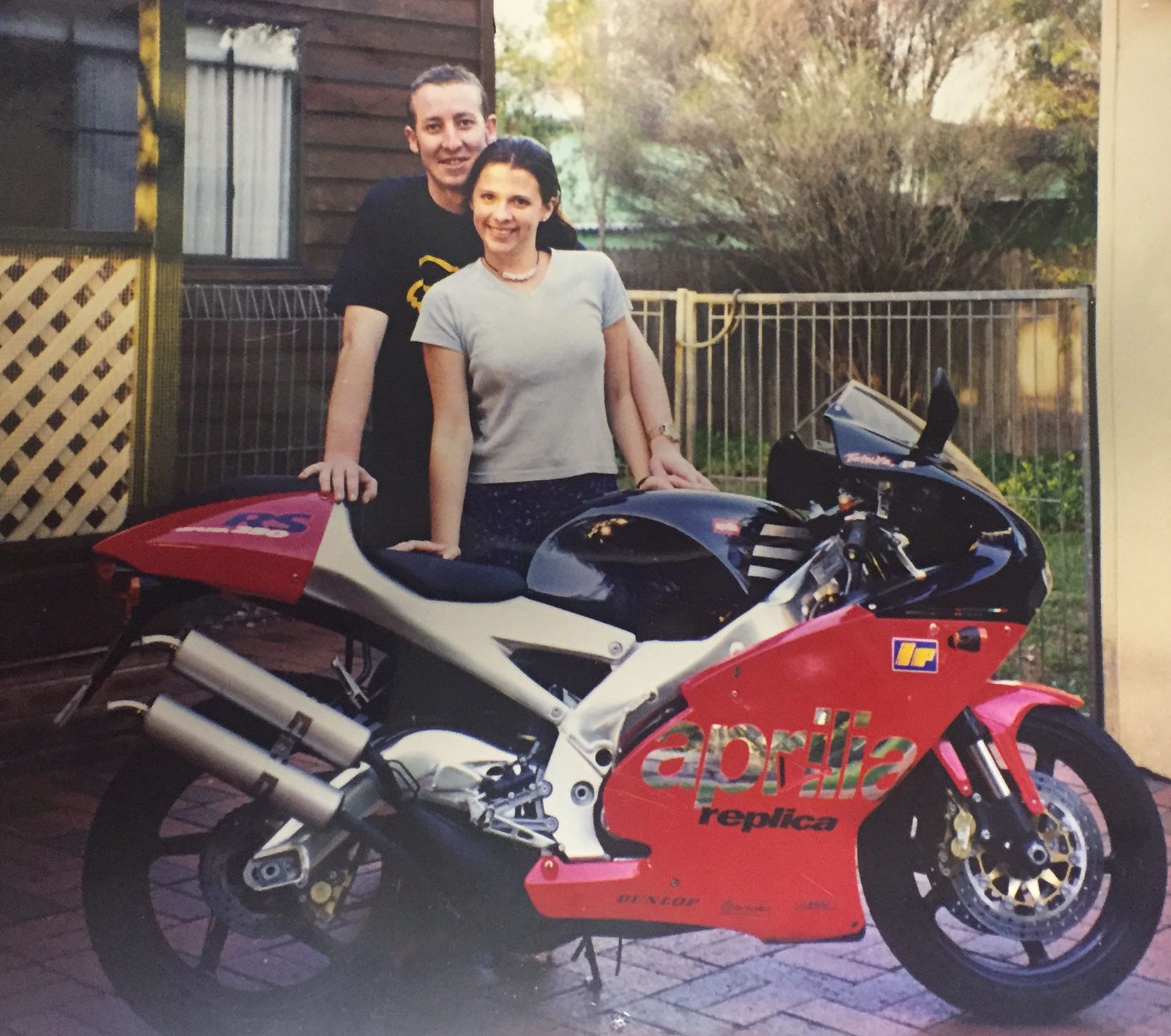 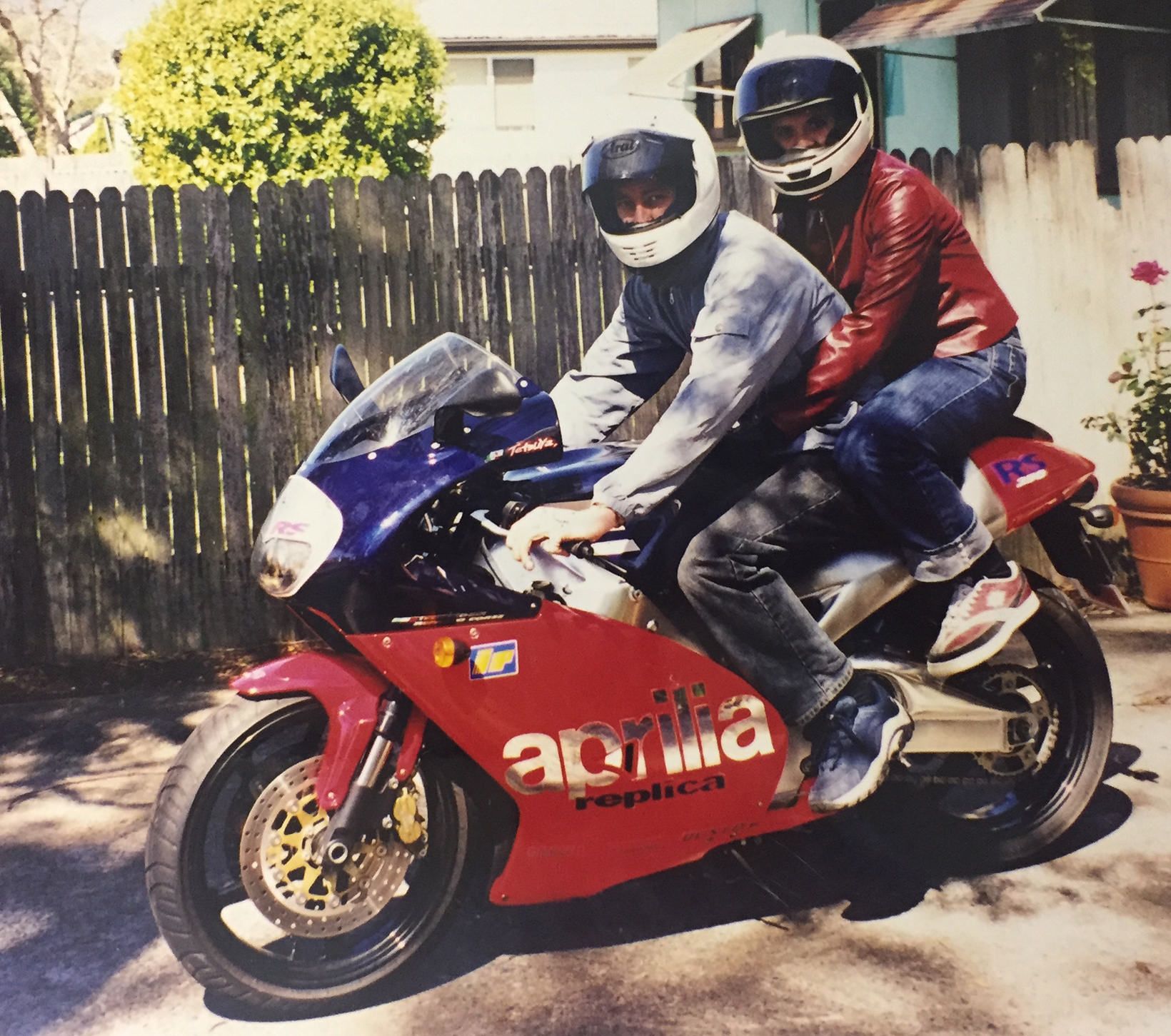 Heather and Jeff with their first RS250 back in late 1999. They vowed to get another one after having to sell it in 2001…

Heather had just finished University, where she completed a Bachelor of Psychology, so she could go on to become a motorcycle publisher ha, and I had just returned from living and riding in Japan and had decided to take a year off racing due to health reasons. I really wanted a two-stroke road bike and loved the Aprilia RS250…

We got some cash together and got a bank loan for the balance and bought an immaculate low mile used 1998 Rossi Replica RS250. It was our first bike together and we scrimped and saved for the deposit for ages. 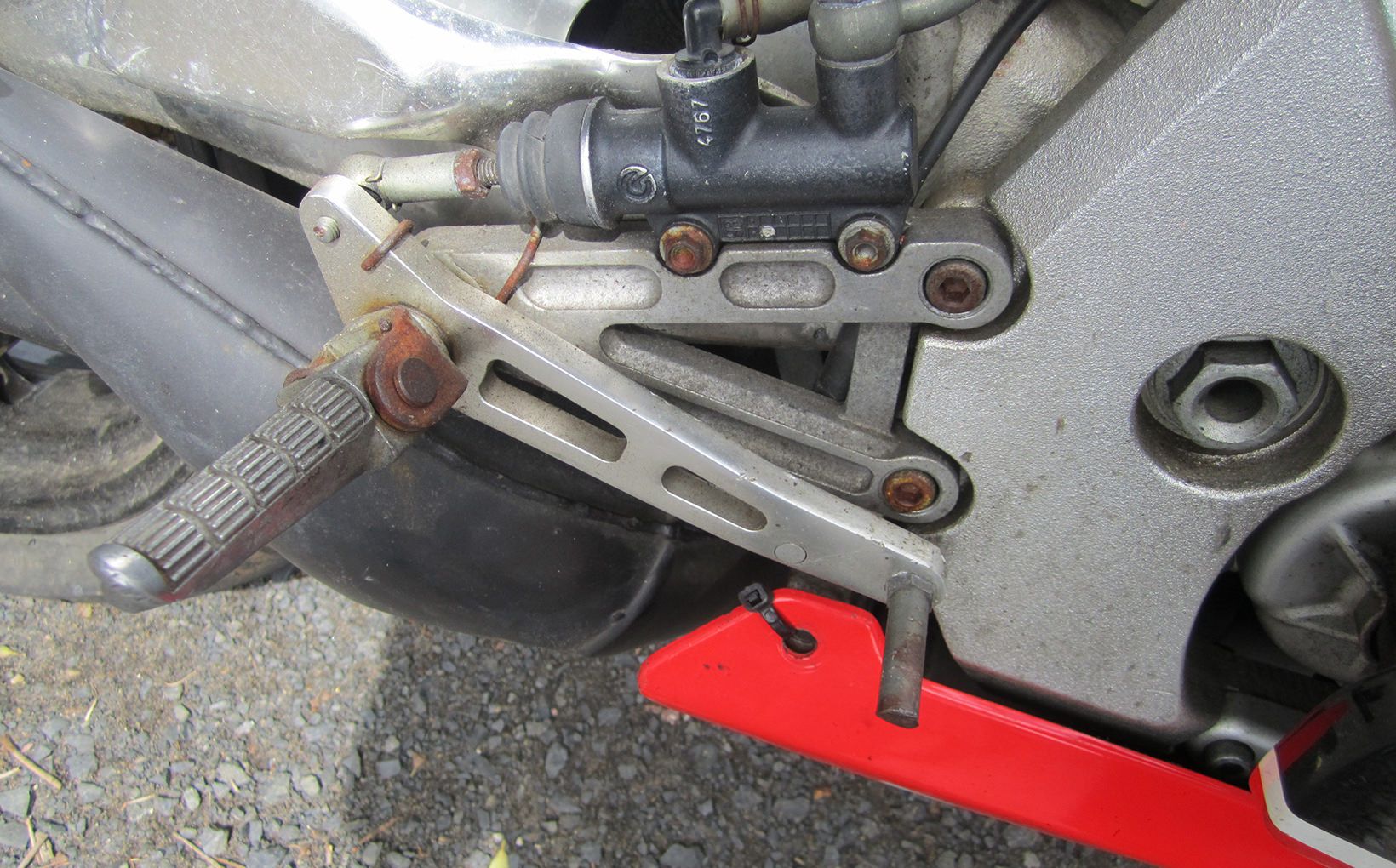 Everything was corroded and rusted as you can see, the pegs and hangars needed a good clean up. 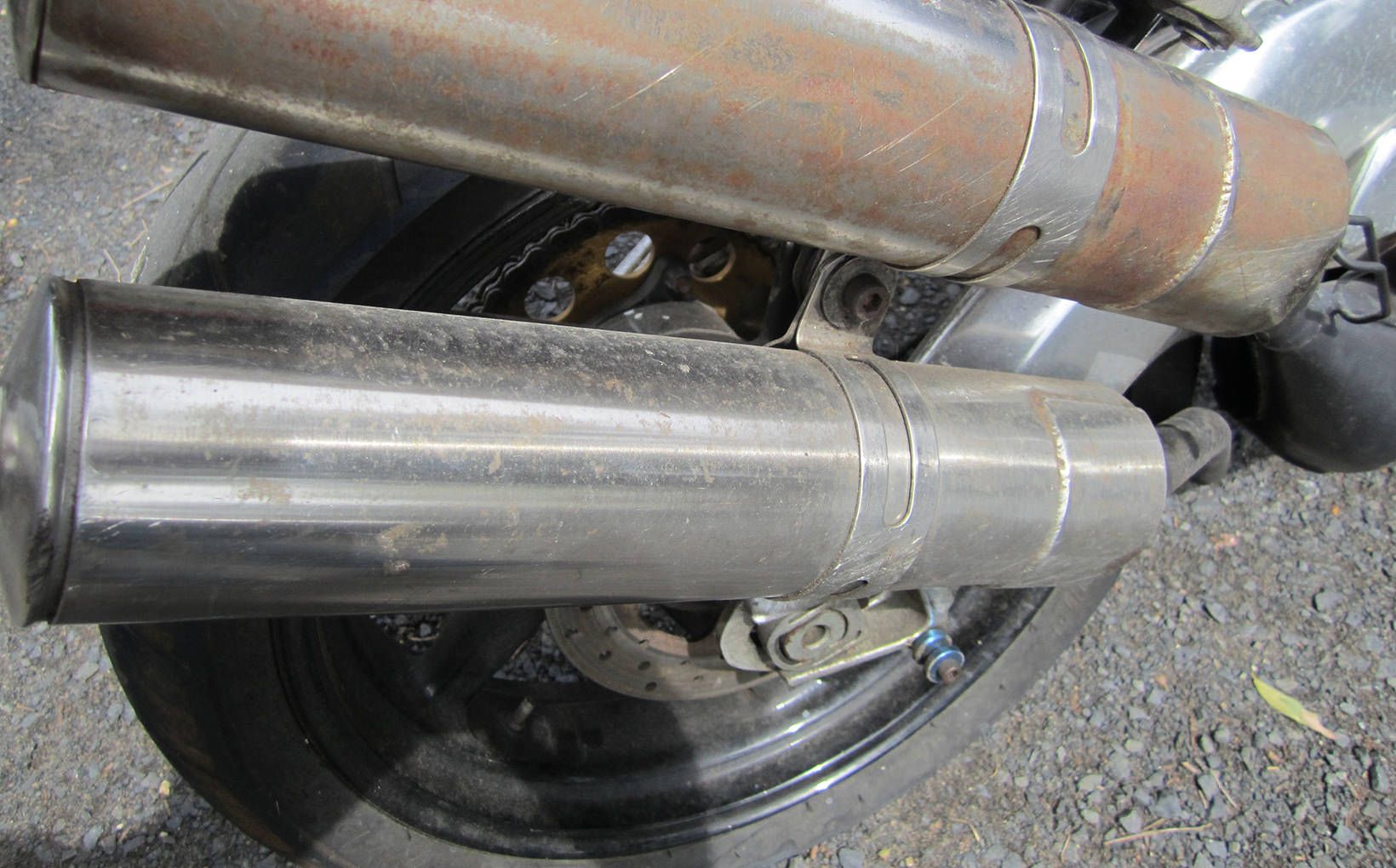 The mufflers had been repaired and were scratched and rusted, desperately in need of some love. 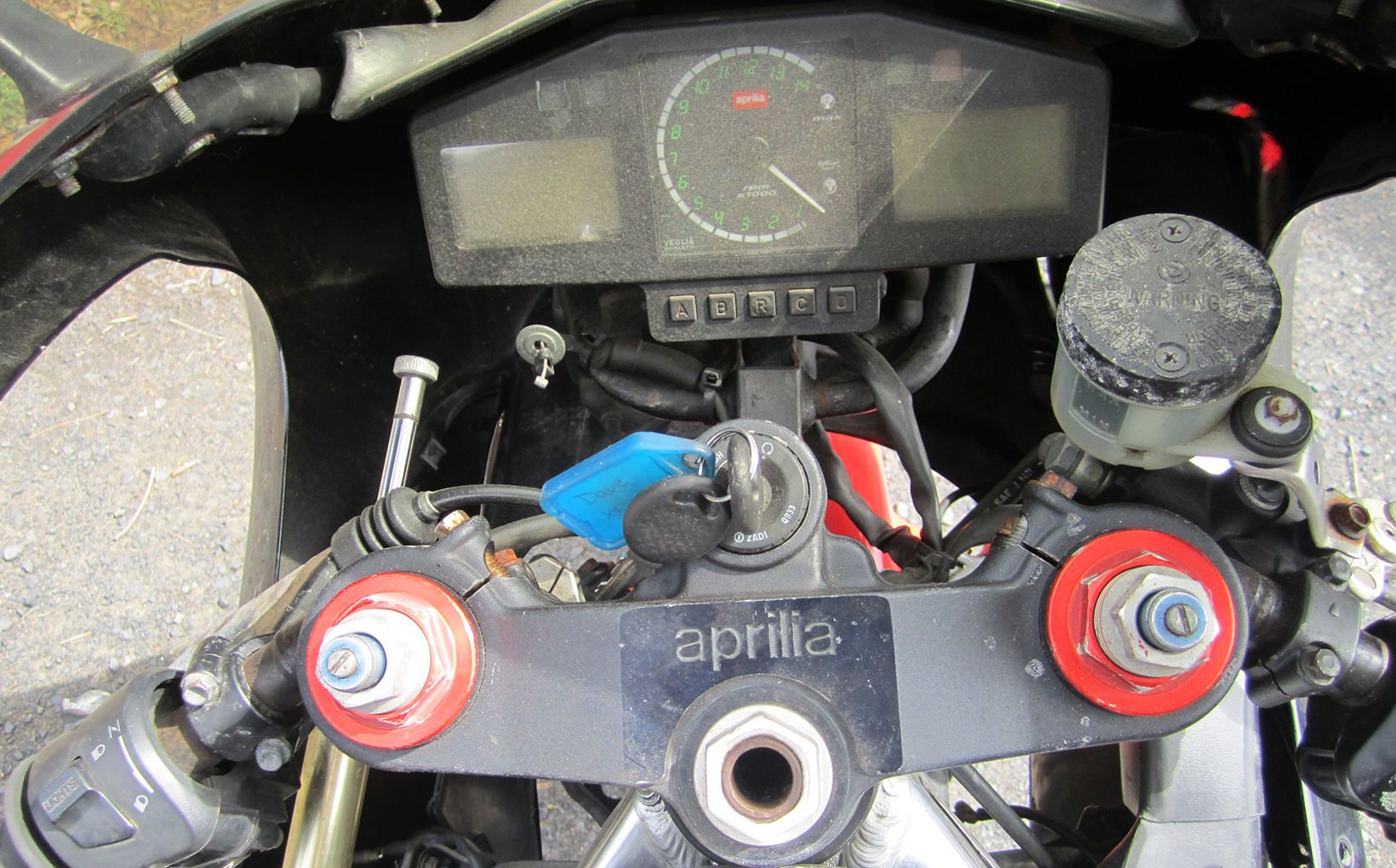 The top fairing bracket was bent beyond repair, the screen stuffed, master-cylinder seized and switches busted.

After spending plenty of weekends carving up Aussie roads over Summer, then on warm Summer nights riding around Sydney CBD taking in the many Harbour views and often stopping off for a pie and peas at Harry’s Cafe, it was decided I was being a right pain to live with so should get back into racing ASAP and the RS was turned into a 250 production racer…

I had a fun season in the Aprilia Challenge Cup on the bike but became seriously ill and I was rehabilitating for many months, so the RS was sold. It was a sad day when it went to a new owner but I knew we would get another one eventually. 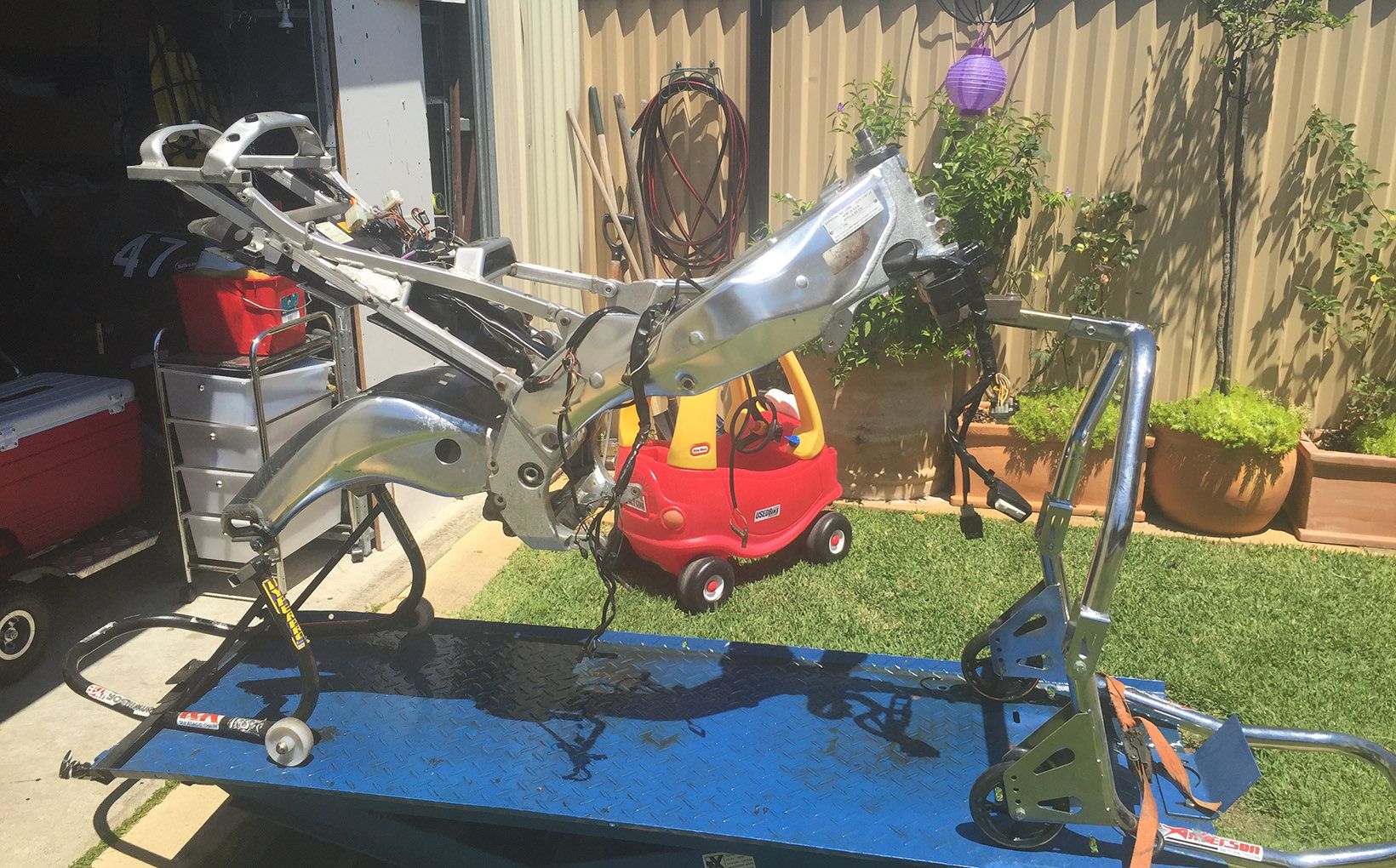 First job was to completely strip the bike and pressure wash the crap off it to assess it. 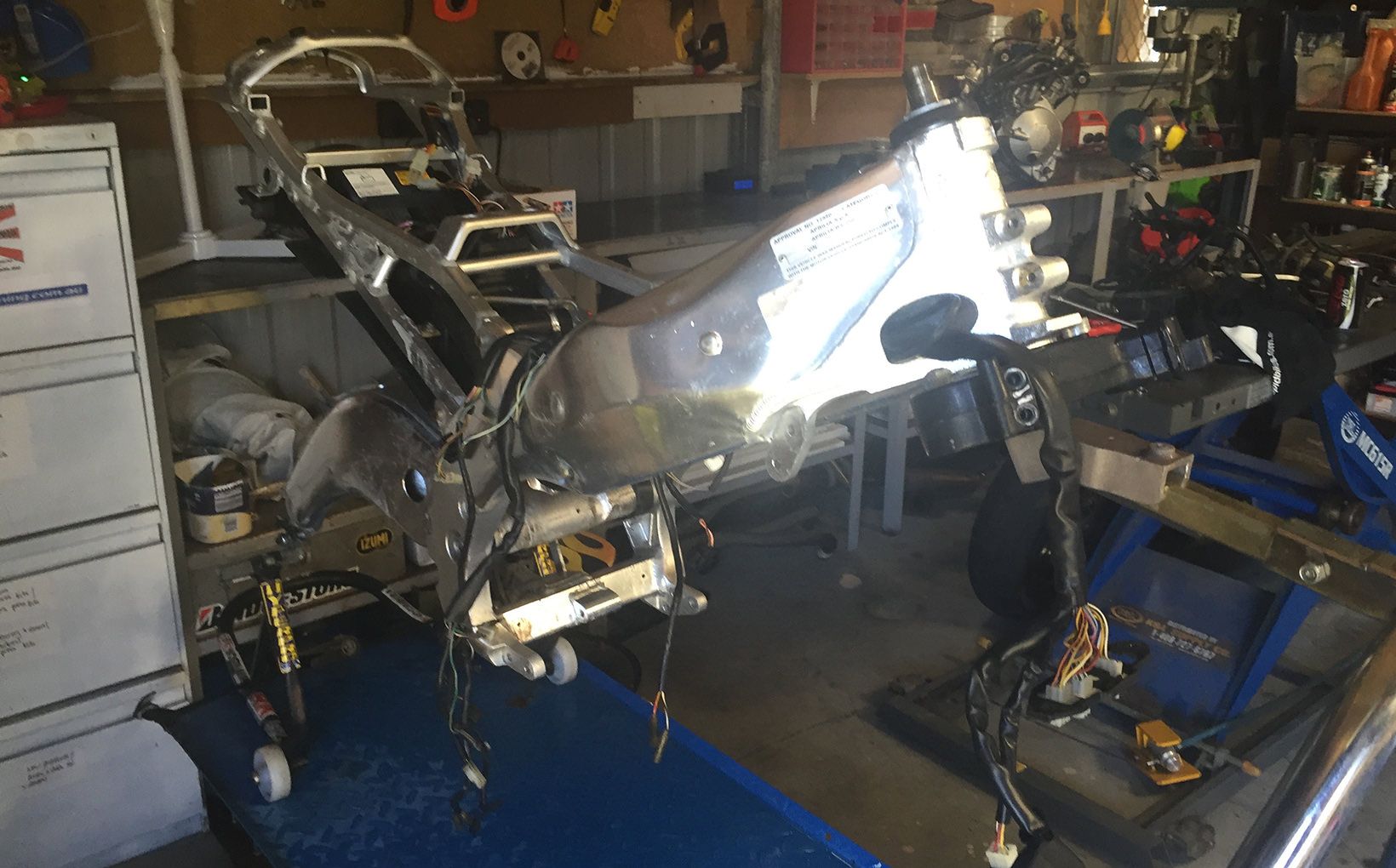 The engine was removed and the chassis serviced. The wiring loom need a lot of work.

When I got better I started full time as a motorcycle journalist at [Two Wheels] magazine, so I was riding all the new bikes and forgot how badly I wanted another RS. Lots of bikes have come and gone since but it eventually happened and I stumbled across this Harada replica by chance, back in 2010. It belonged to a mate of mine Thommo (the owner of the RG500 Walter Wolf I tested).

I made him an offer and an hour later I was leaving with an RS250 and boxes of bits in my trailer… The bike sat in the corner of my garage as we seemingly had kid after kid and I wasn’t until late 2016 that I dragged it out and made a start on the resto. 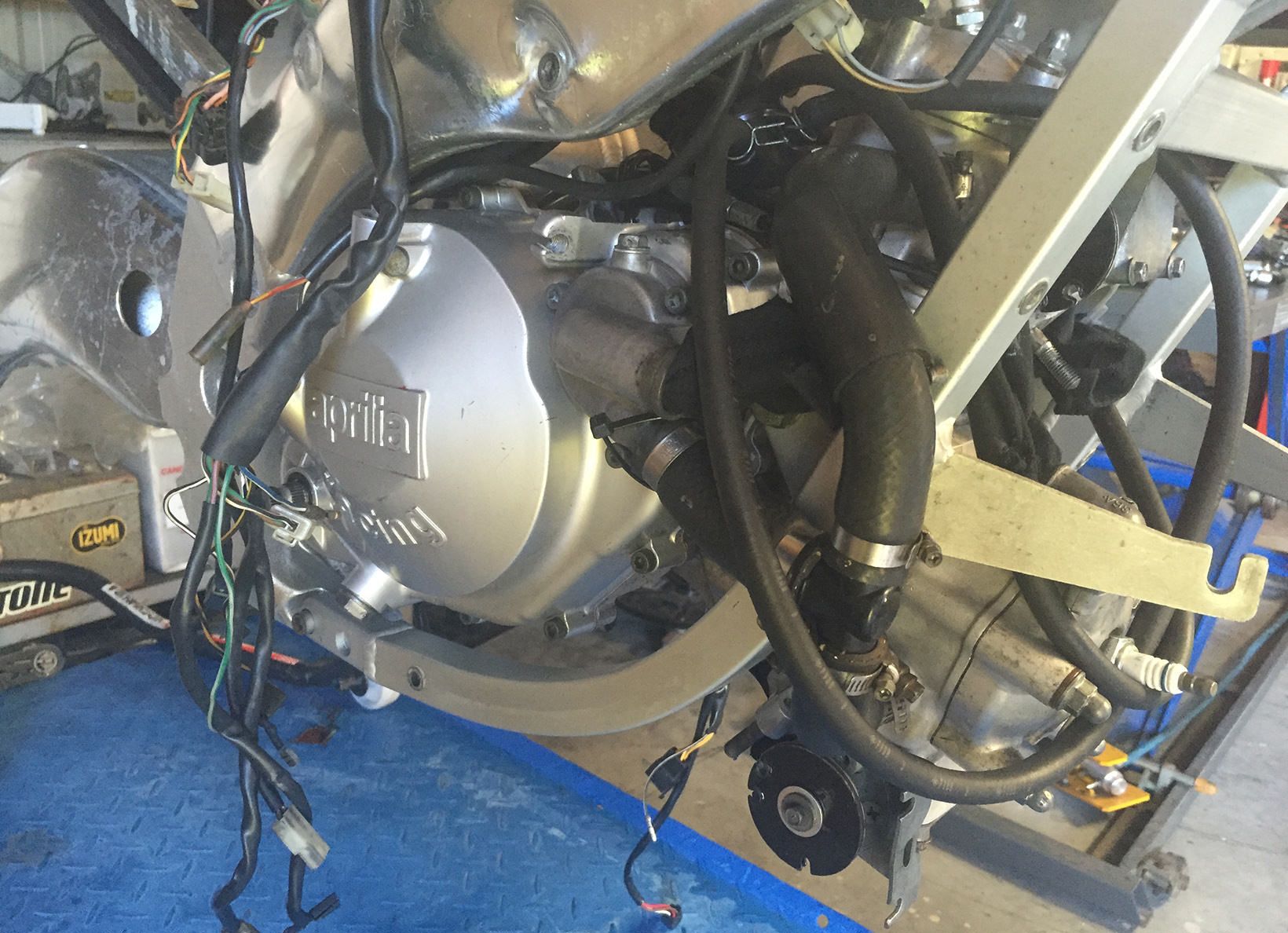 The engine had worn main bearings, leaking crank seals, completely worn cylinders and a wrecked gearbox and clutch, not to mention the seized powervalves!

I had zero budget but lots of spare parts from years of racing RGV250s, plus I had built and raced with great success an RSX550 here, which is an RS250 with an SXV550 engine. I won an F3 Championship and had lap records on that bike… I also happened to have the remains of the donor bike and original VJ22 engine. Happy days…

This was not to be a concourse resto by any means. I just wanted a mechanically sound RS that ran well and handled well and looked OK. The main thing for me was that no corners were cut mechanically, so I focussed on that and not on appearances. This bike was going to be a keeper and I planned on riding it every other weekend. If only I knew I would be selling it after just one ride… Yes, another kid arrived. I had to buy a minibus! 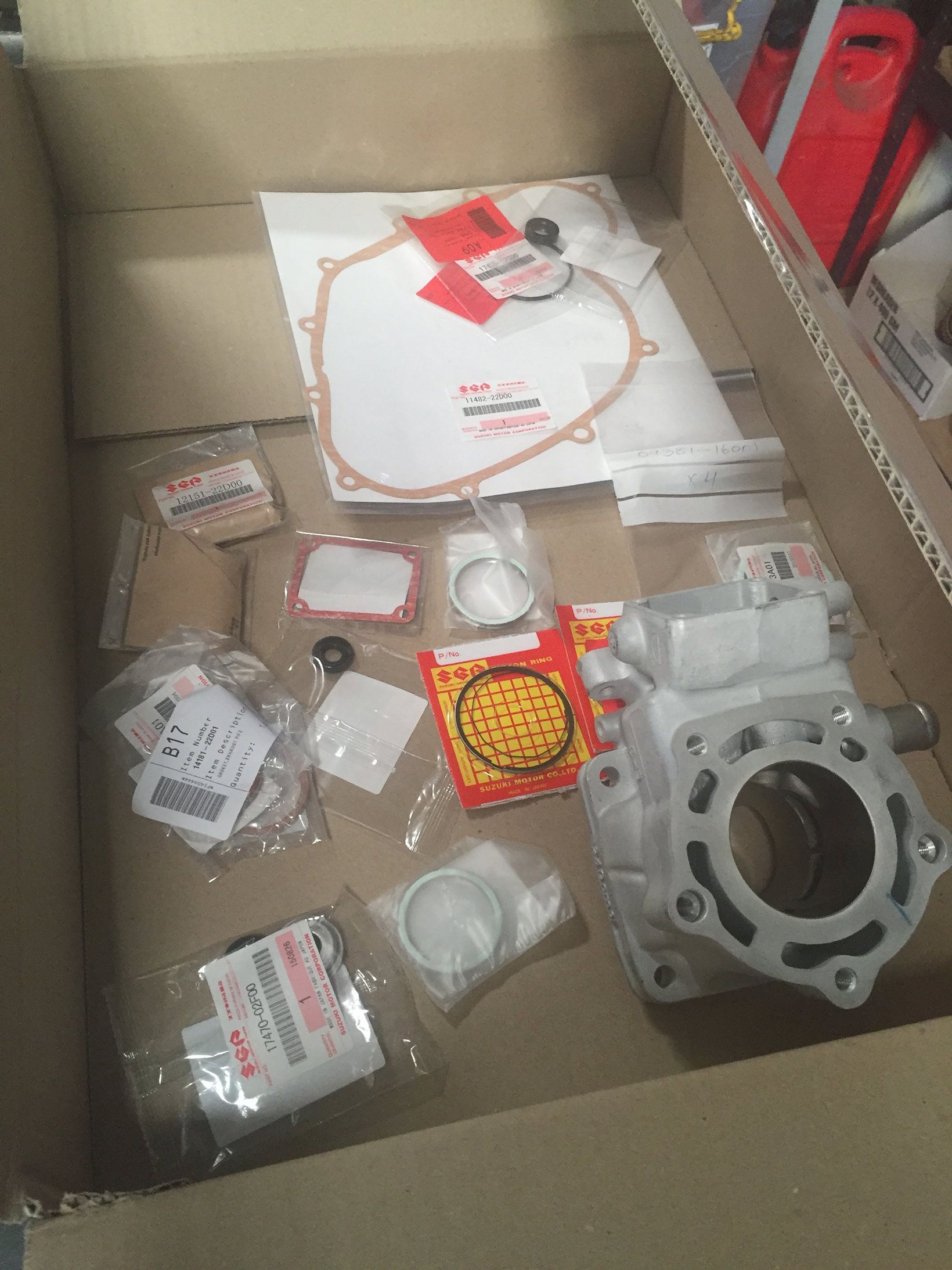 A mix of new and used parts went into the rebuild. 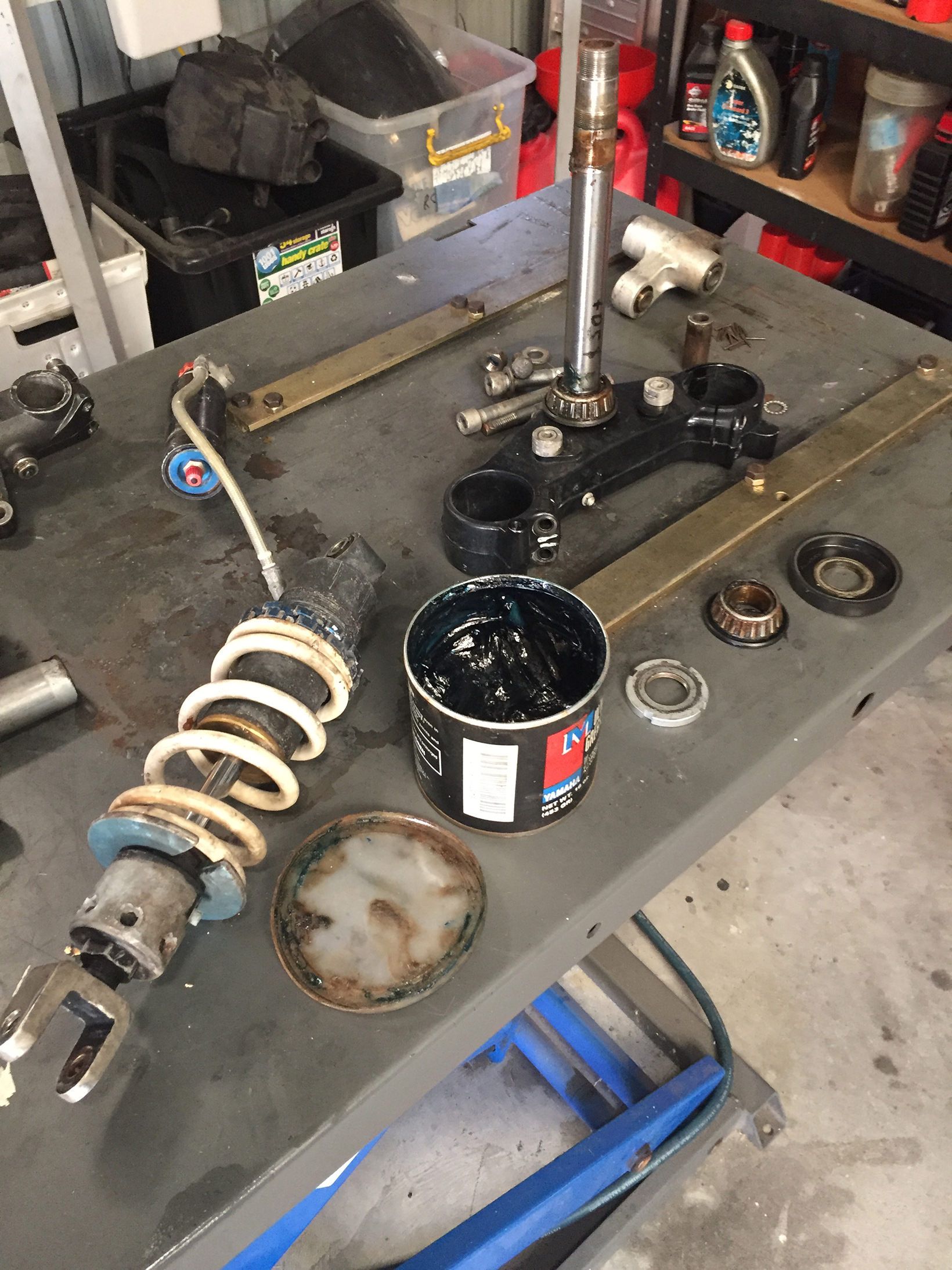 New steering-head bearings, rebuilt shock, all tidied up and re-painted as well. 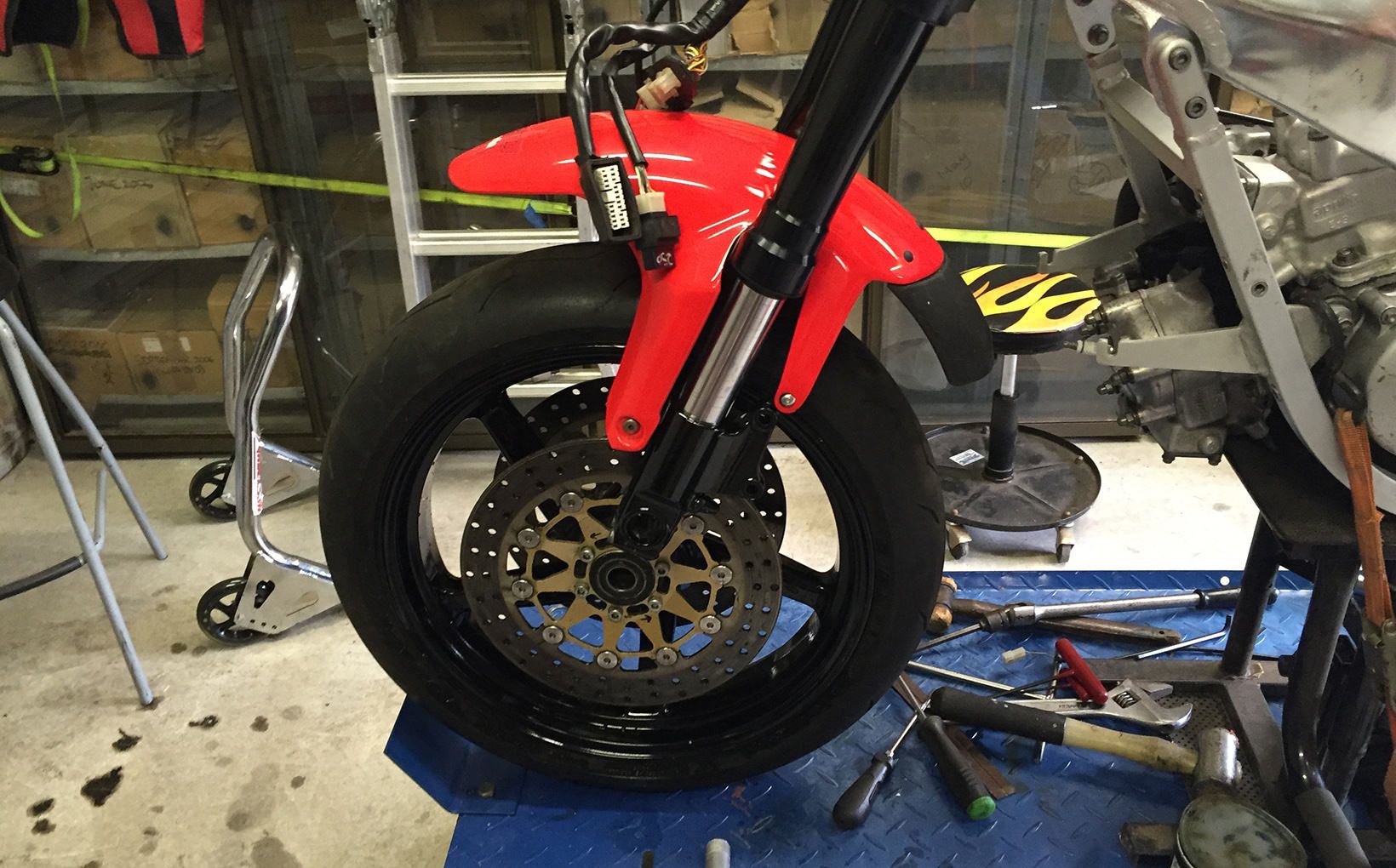 The forks were rebuilt and painted, triple-clamps and handlebars painted and so were the wheels. 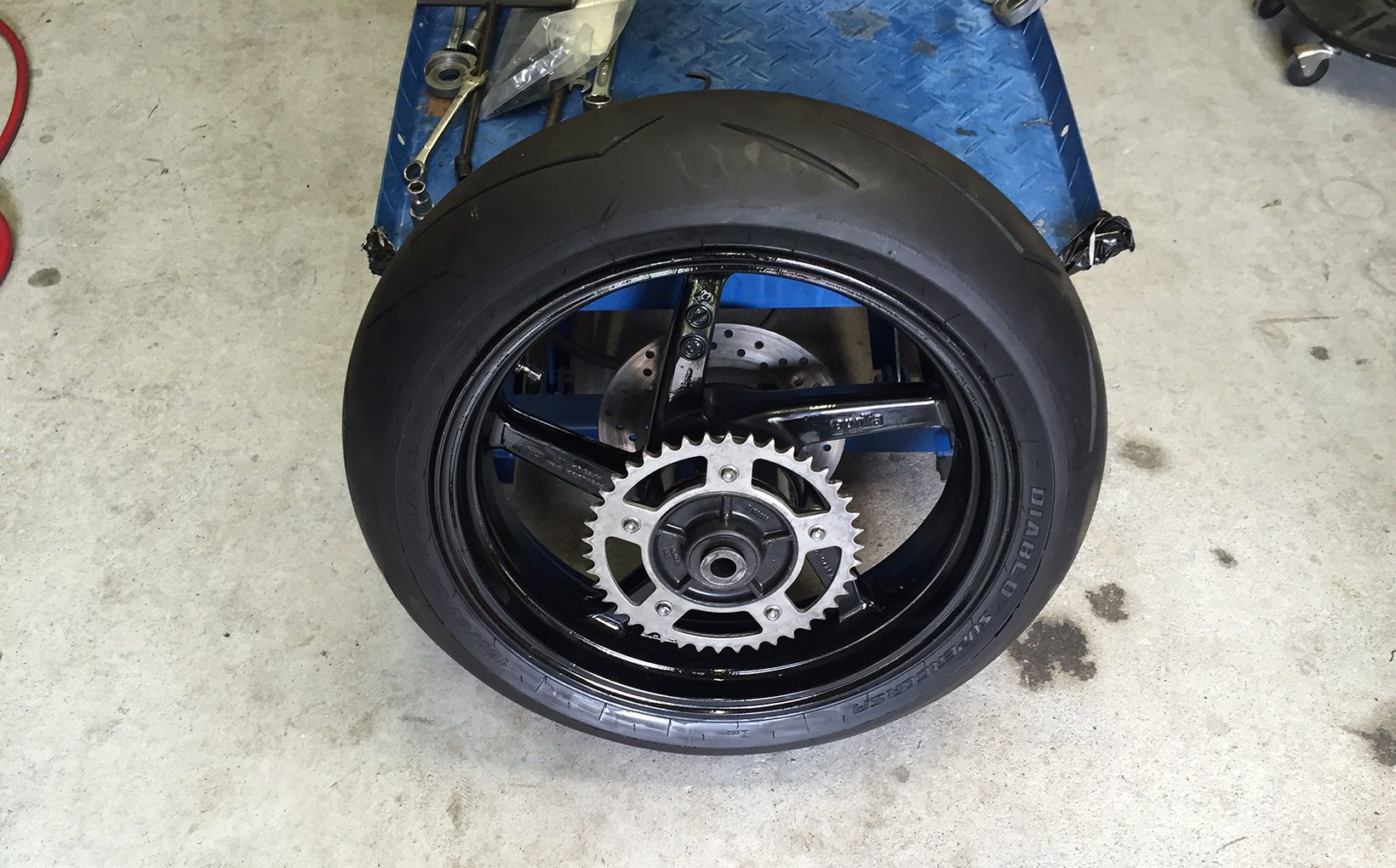 The wheels got new bearings and tyres and were also painted.

As you can see in the images, the bike was as rough as guts and very corroded. The engine was shot, the forks leaking, brakes locked solid, tyres crap, fairing damaged and every bracket was bent in some way. The tank was the wrong colour and the basically, the bike was junk.

First off I completely stripped the bike. Once it was down to a bare frame, I rolled it out of the shed and pressure washed the road crud off it. I also pressure washed the wheels, forks, triple-clamps, shock, swingarm and anything else I was going to strip down. It was filthy… 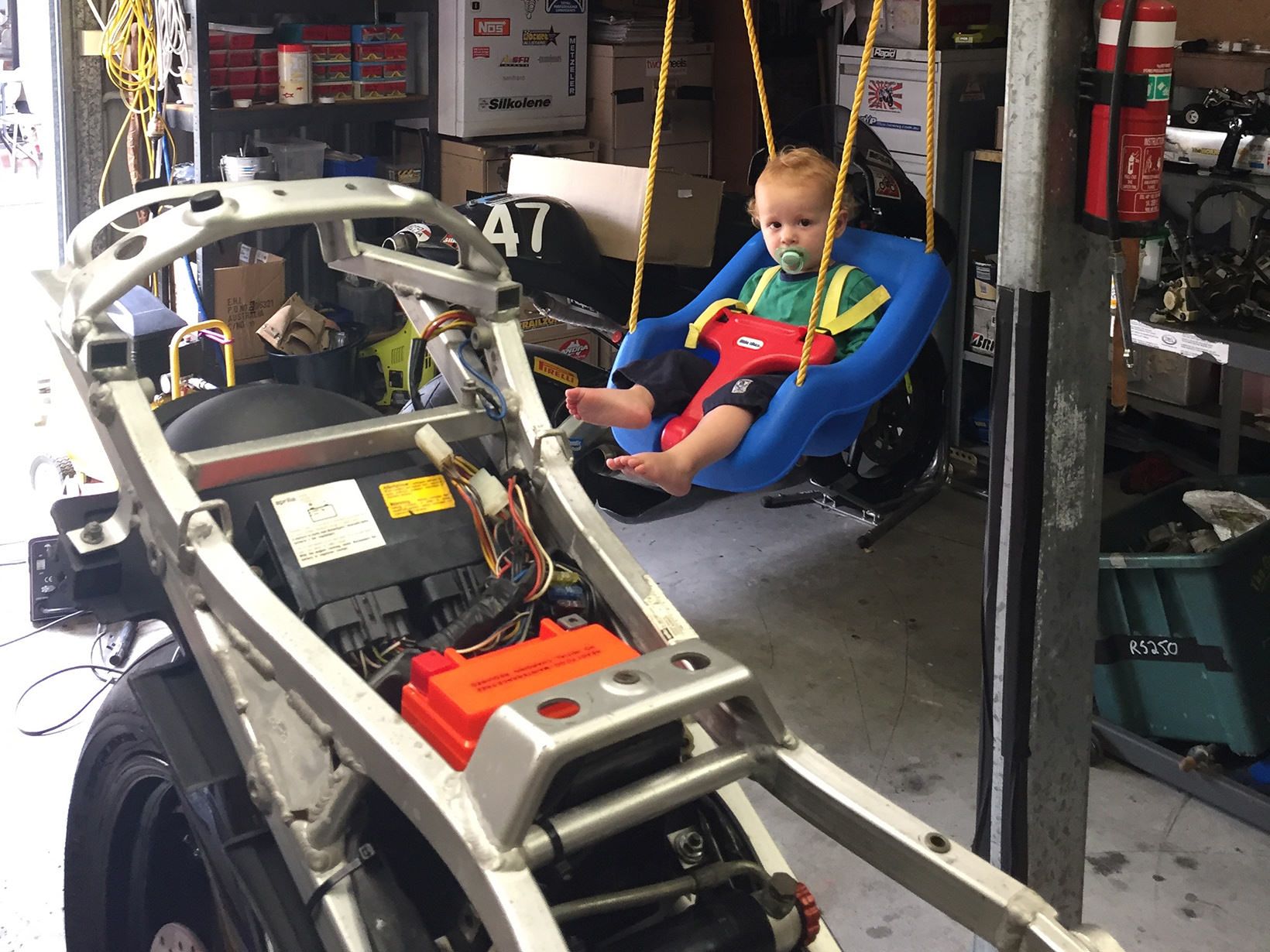 I had my little apprentice helping me with the job! 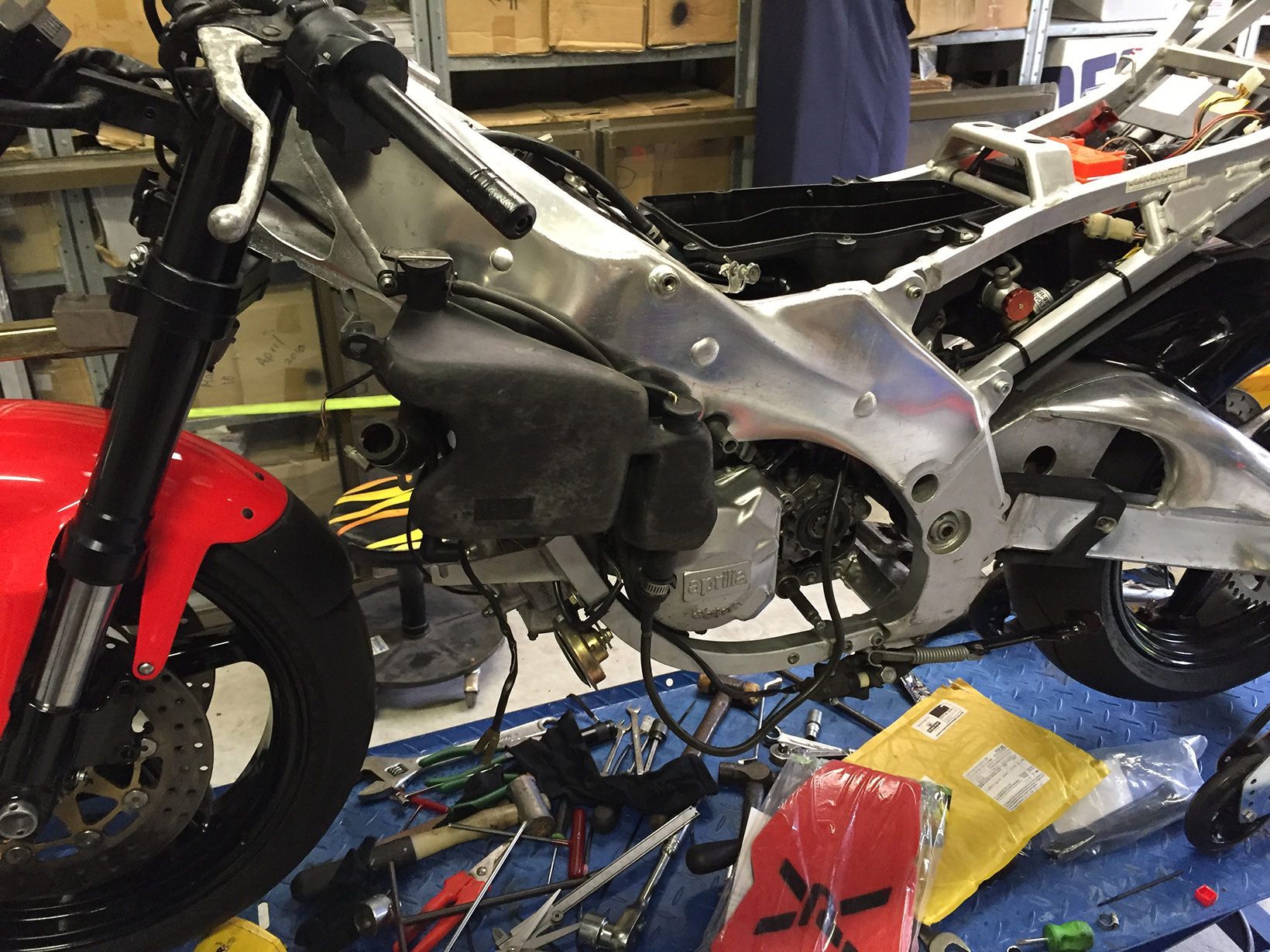 Engine back in and starting to take shape now. Lots of small jobs at this stage from replacing fasteners to lubing and servicing pivot points, cables, replacing hoses and so forth.

Once I had my chassis parts laid out and a few things on order that I didn’t have, I turned my attention to the engine. I did a complete strip down of the motor and on assessment, decided to do a complete rebuild.

I had a near new crankshaft in my spares so I fitted that, it had only done a few thousand km, and I also fitted new pistons, new rings, small ends, one brand new and one near new cylinder, completely rebuilt the powervalves, rebuilt the gearbox and clutch and put it all together and back in my now restored chassis. 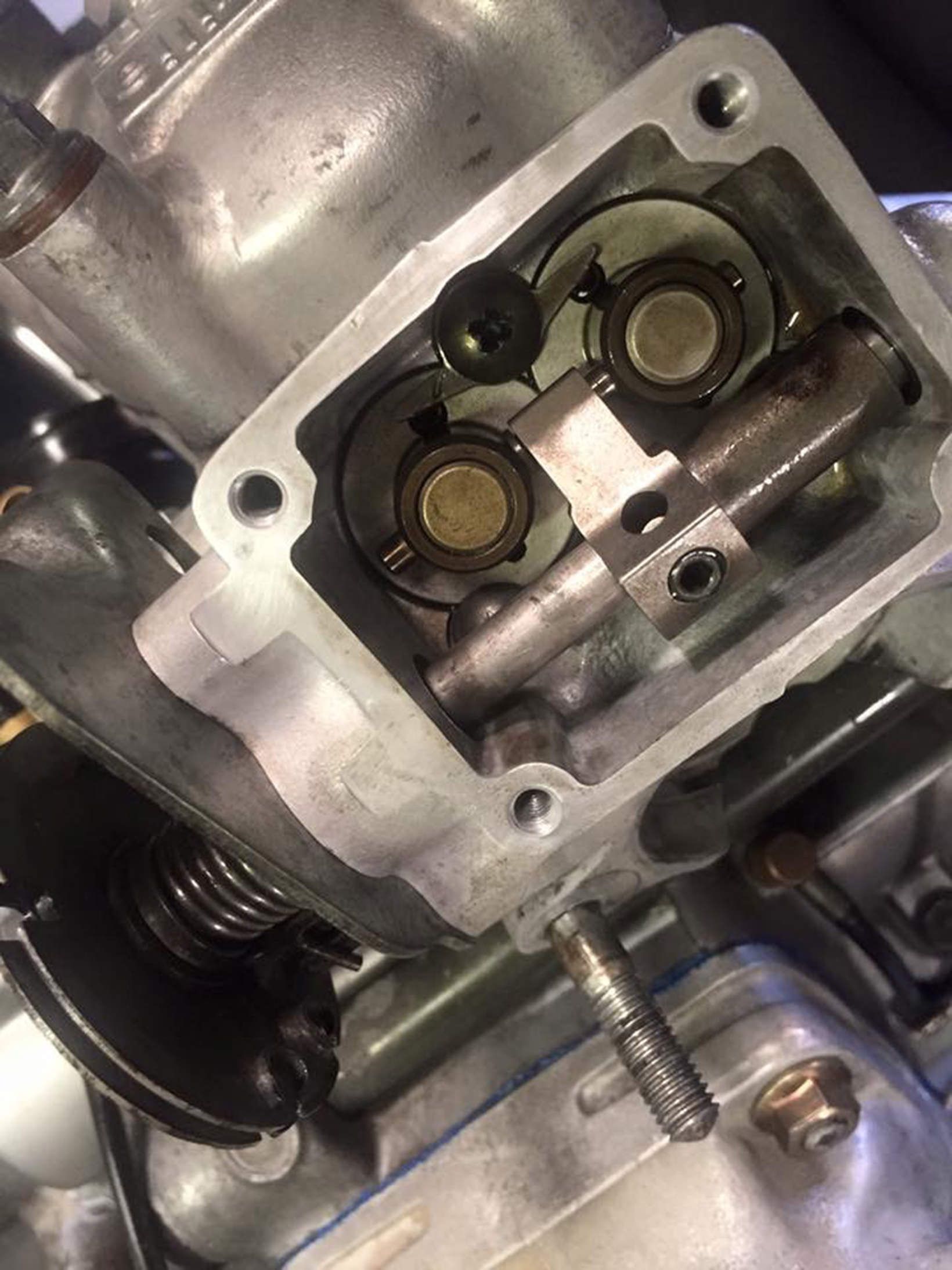 Rebuit powervalves. These were the most expensive parts of the build, luckily I had plenty of old spares laying around from my racing days. 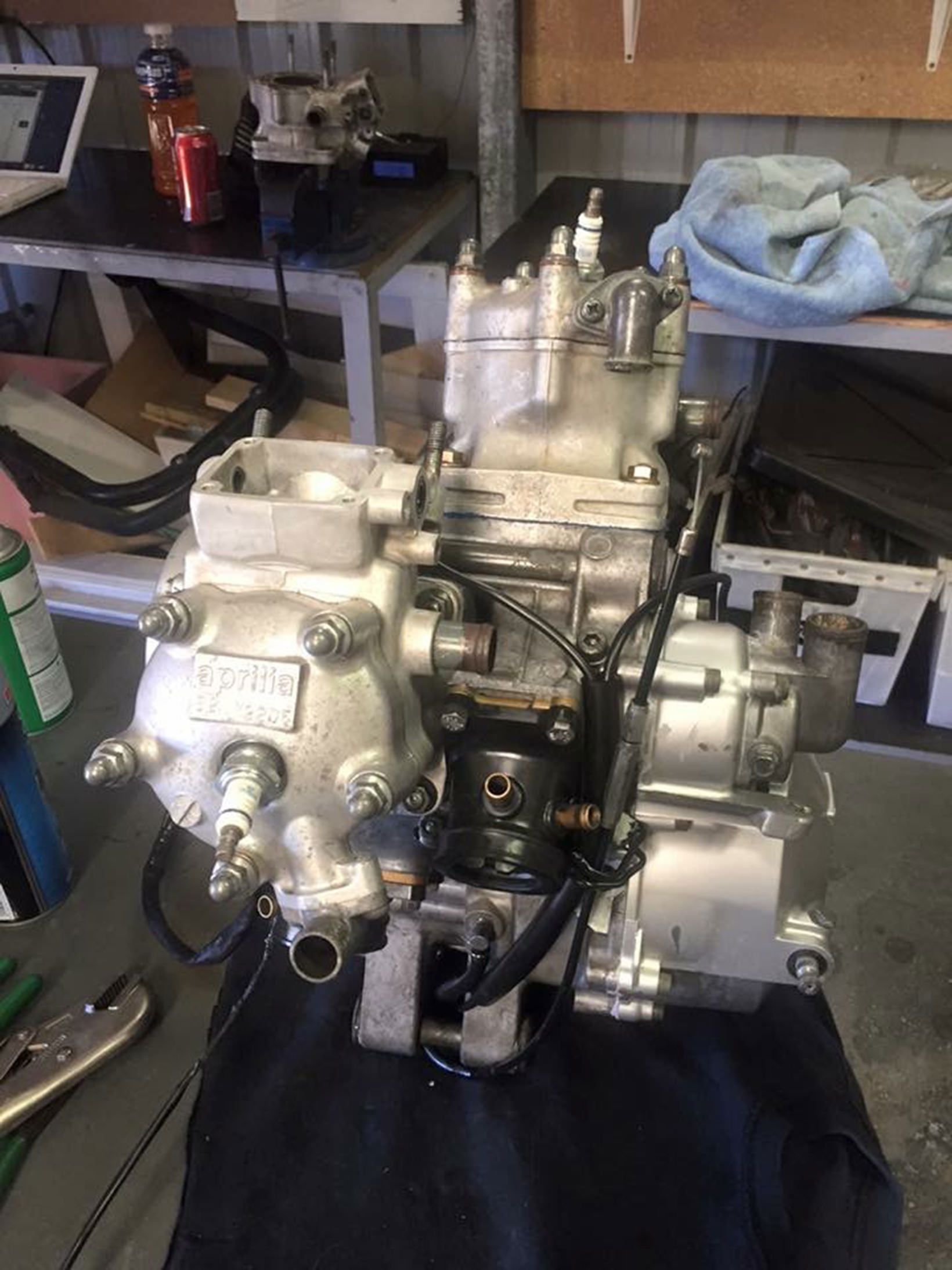 The fresh engine ready to go back in to the restored complete rolling chassis. 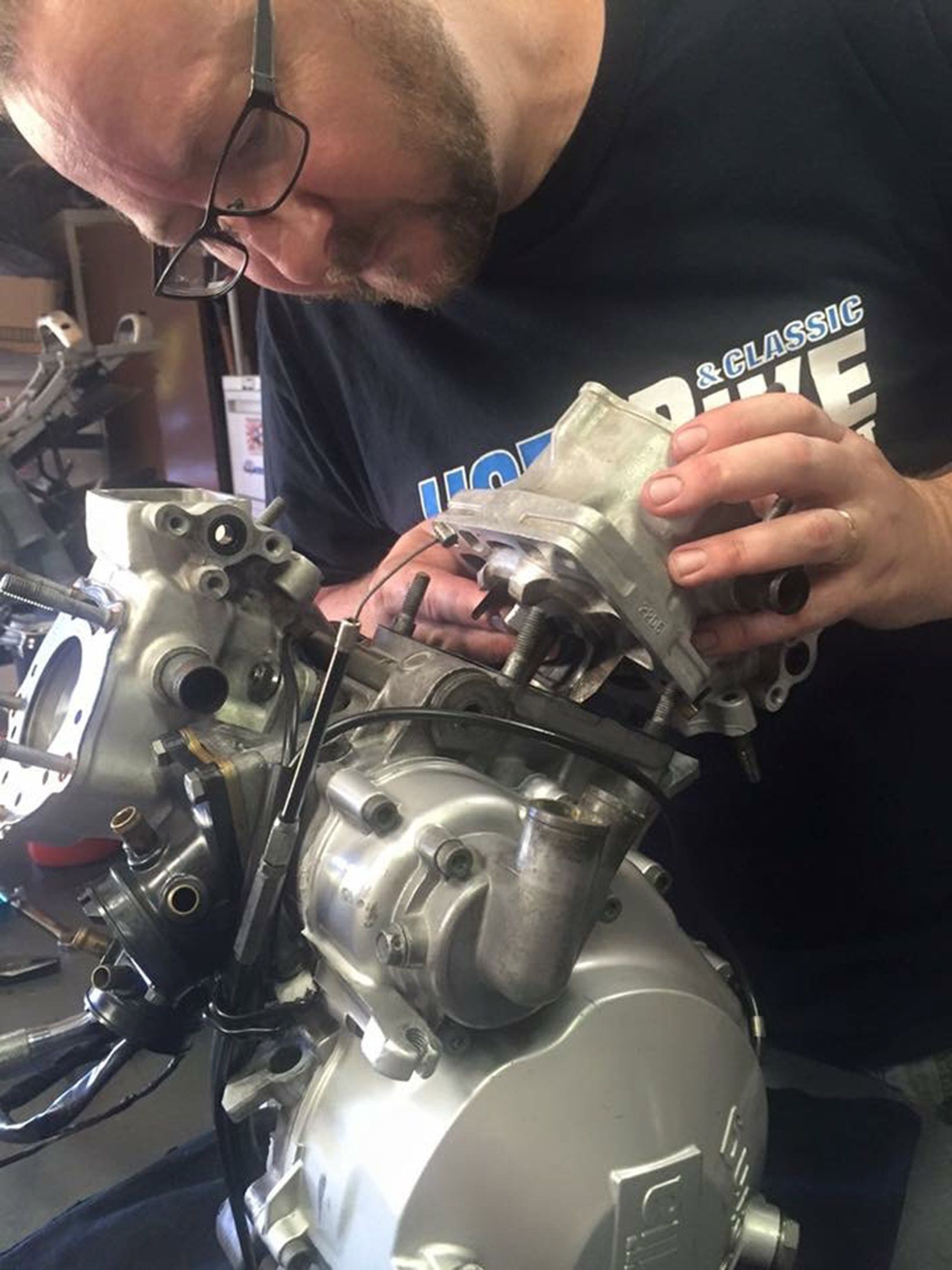 Brand new cylinder goes on. I also always use new OEM gaskets. Most studs were replaced and if not, removed and wire wheeled. I always use new copper washers and new nuts for the barrels too. 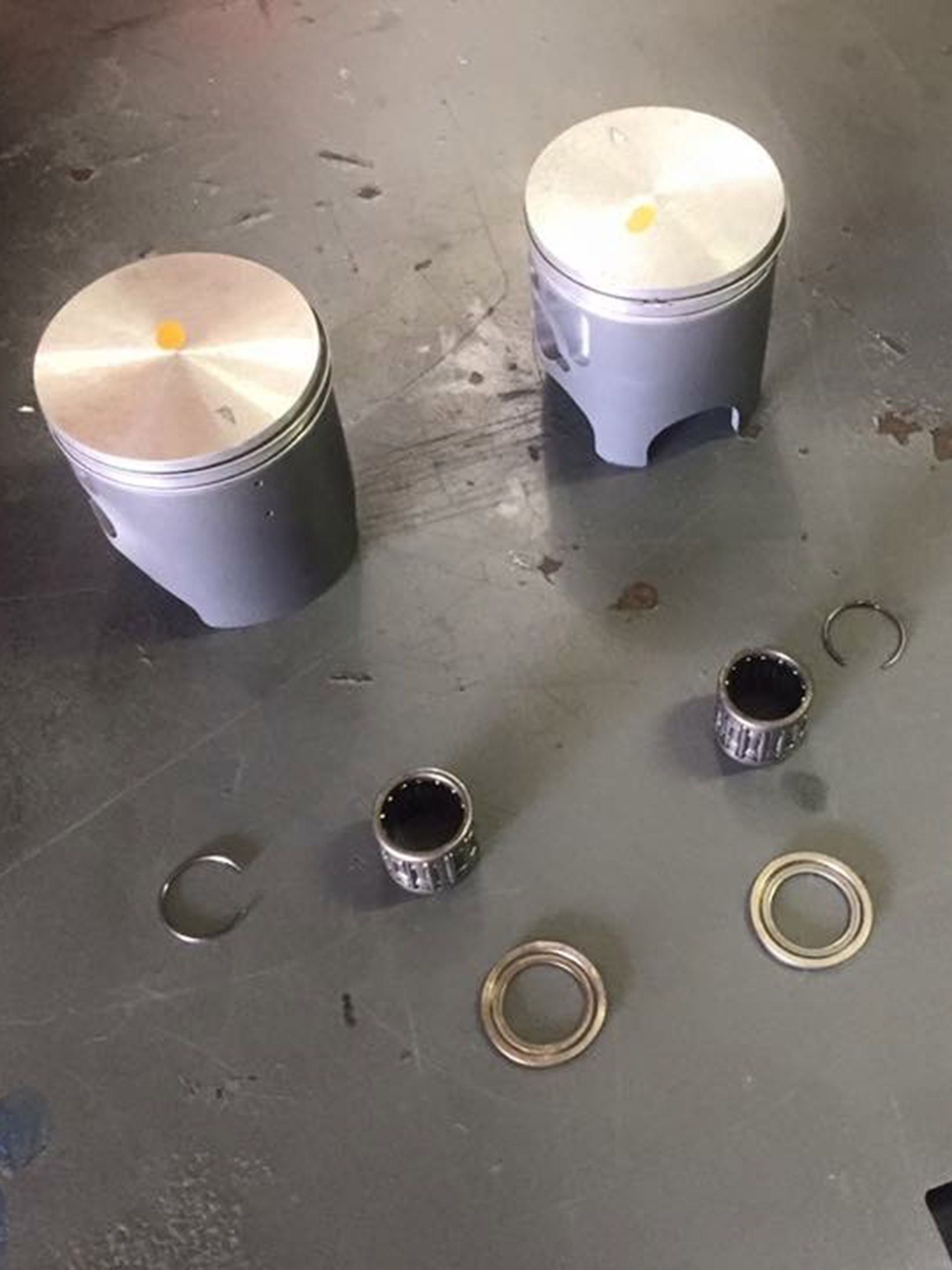 New pistons. These were gifted to me by Andrew Pitt, his dad still had them from Andrew’s 250 Production days in the mid 1990s! 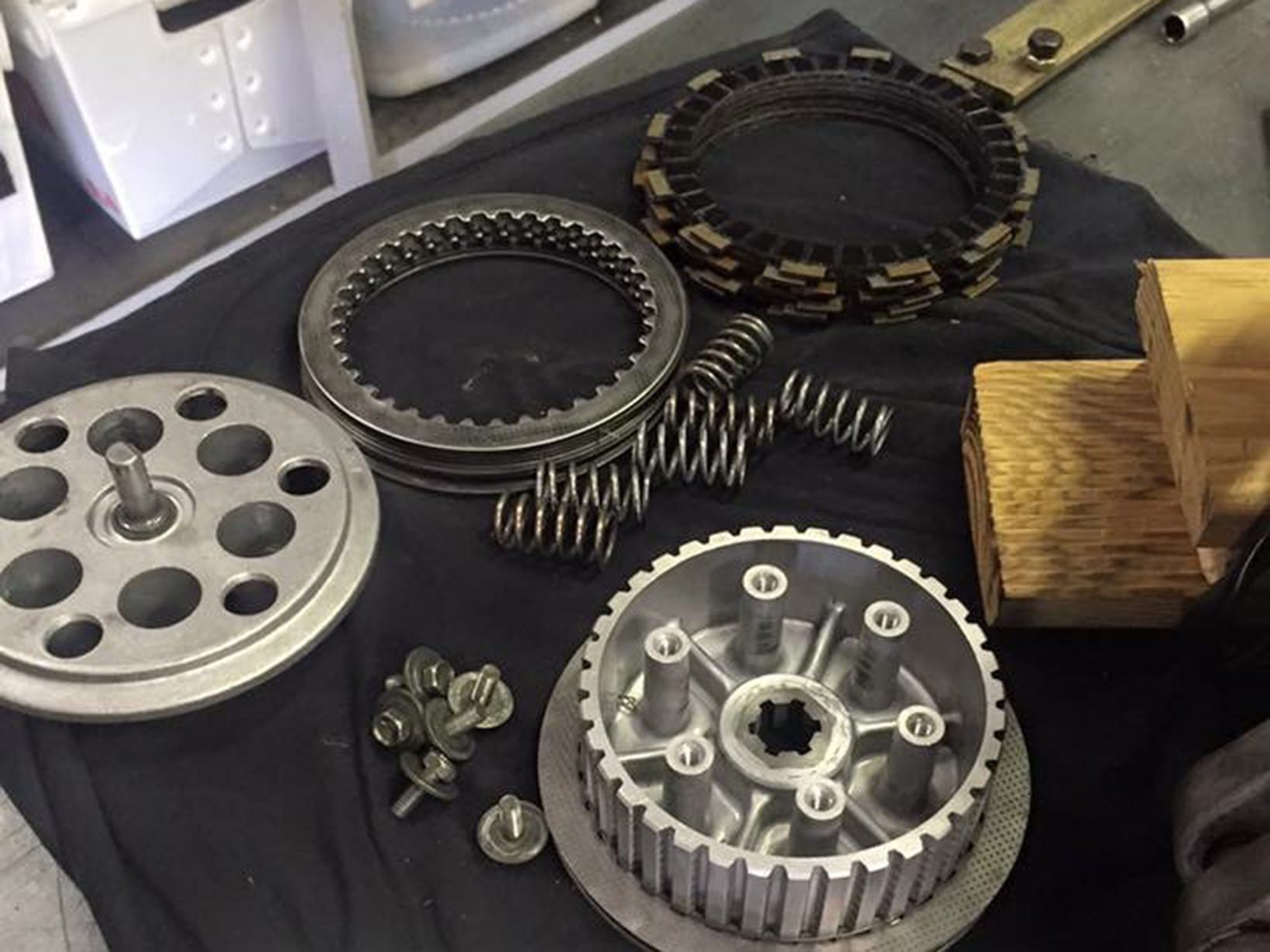 Complete clutch rebuild using new fibres and a few new steels, I also had some near new ones at home. I used brand new OEM springs. 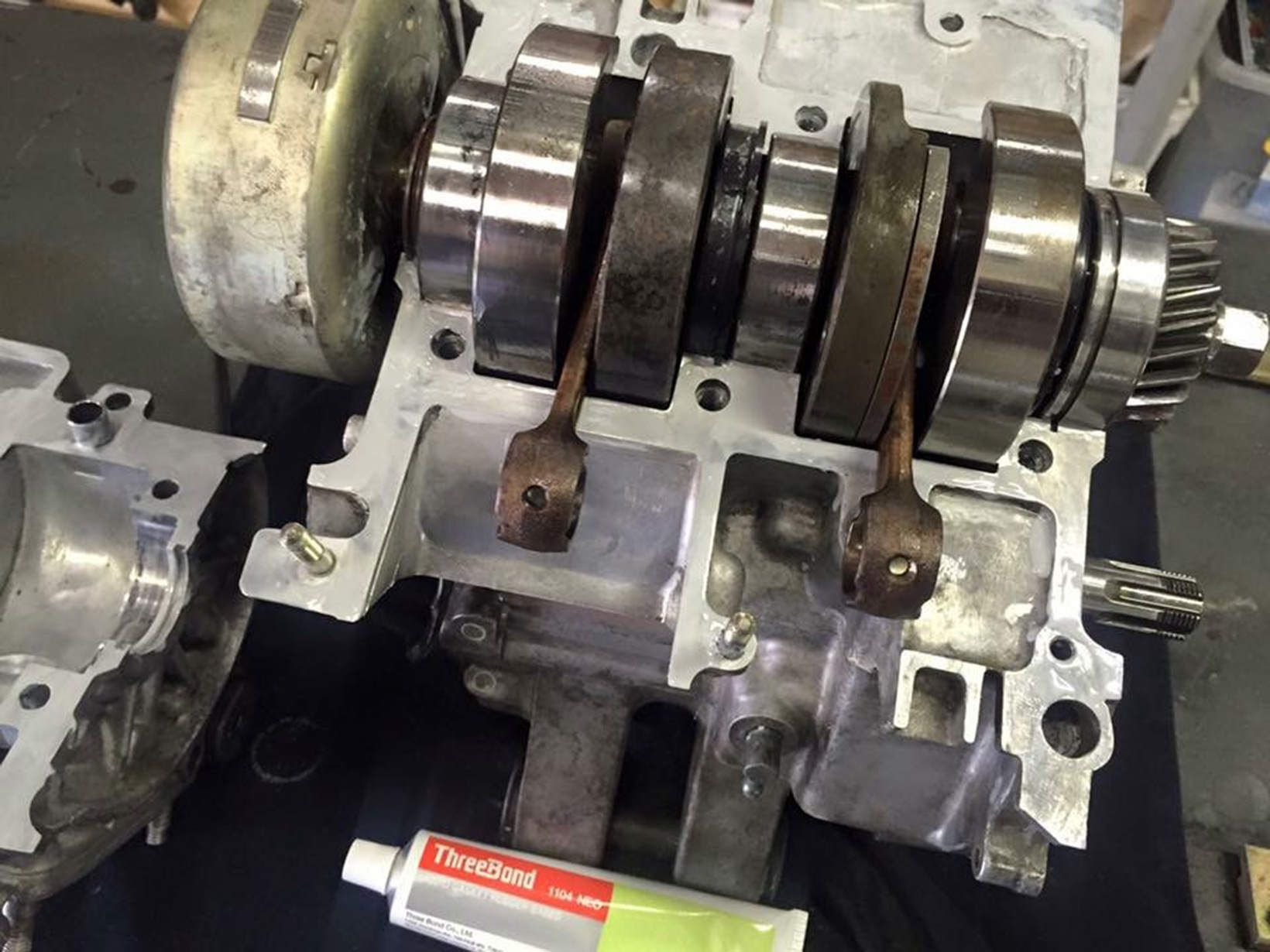 The cases ready to go together with the low mile crankshaft fitted.

After rebuilding the complex carburettors and setting them to standard jetting as a starting point, I fitted them and then spent a few days tidying up the rooted wiring loom. I then replaced any damaged or ageing hoses (there are plenty of them) from vacuum to fuel lines and all of that stuff. All of the powervalve cables were lubed up and fitted, timing set for the valves, a coupla fresh NGKs torqued in and a freshly painted radiator with a few new hoses bolted on… Everything was done as per the workshop manual. I’m really fussy on routing cables, wires and hoses as per the factory and study images and diagrams when doing this part of a resto… 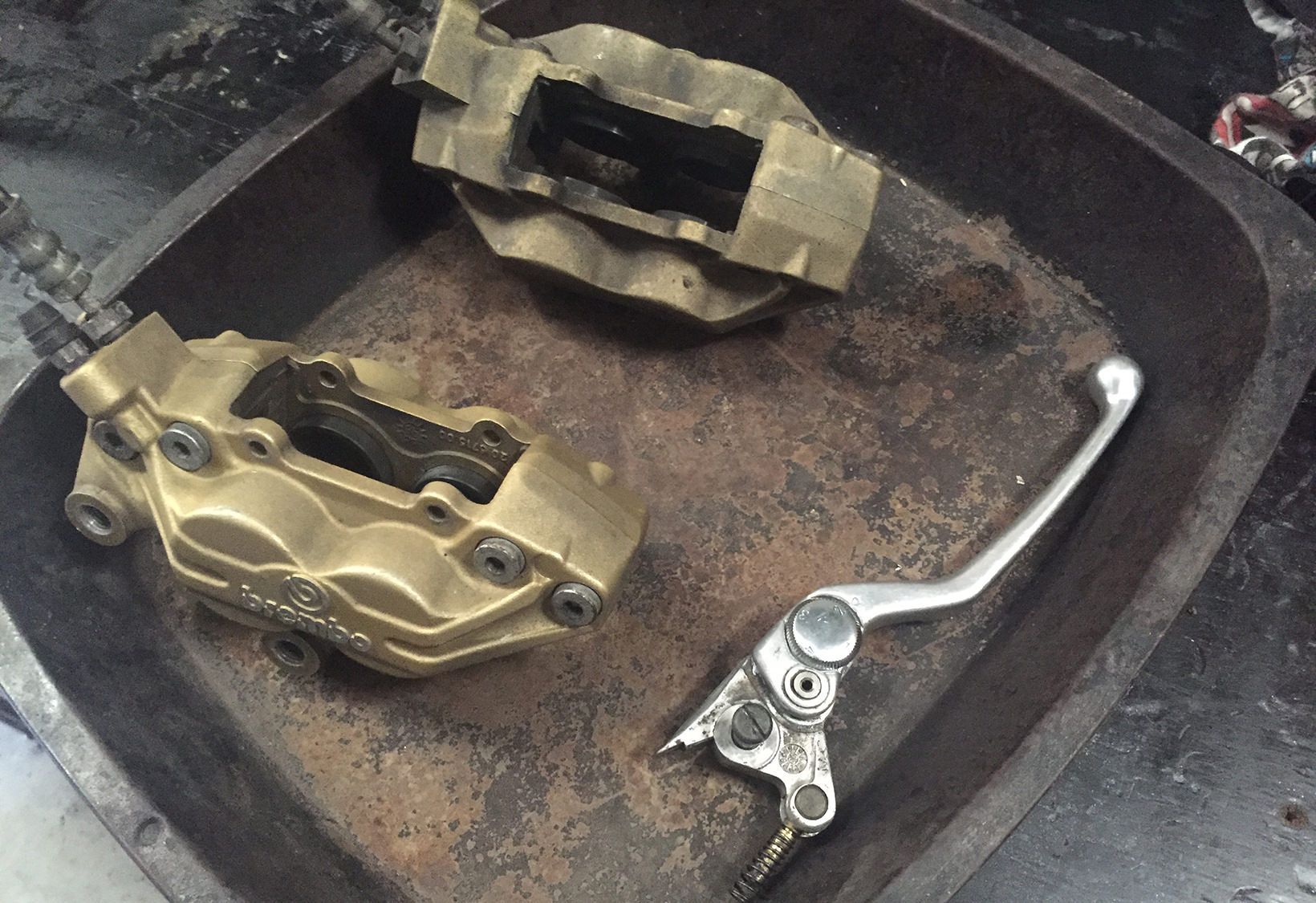 The calipers were stripped and rebuilt. Seal kits were not available so I had to clean the calipers up as best as possible and re-use the seals, which were fine.

I cleaned up and painted the original expansion chambers next, then did my best to polish the heavily scratched and previously repaired mufflers. A set of Arrow stickers I had covered the marks I could not get out!

With the engine in and the fundamentals all plumbed up and sorted, it was time to turn my attention to the finer details to complete the bike… 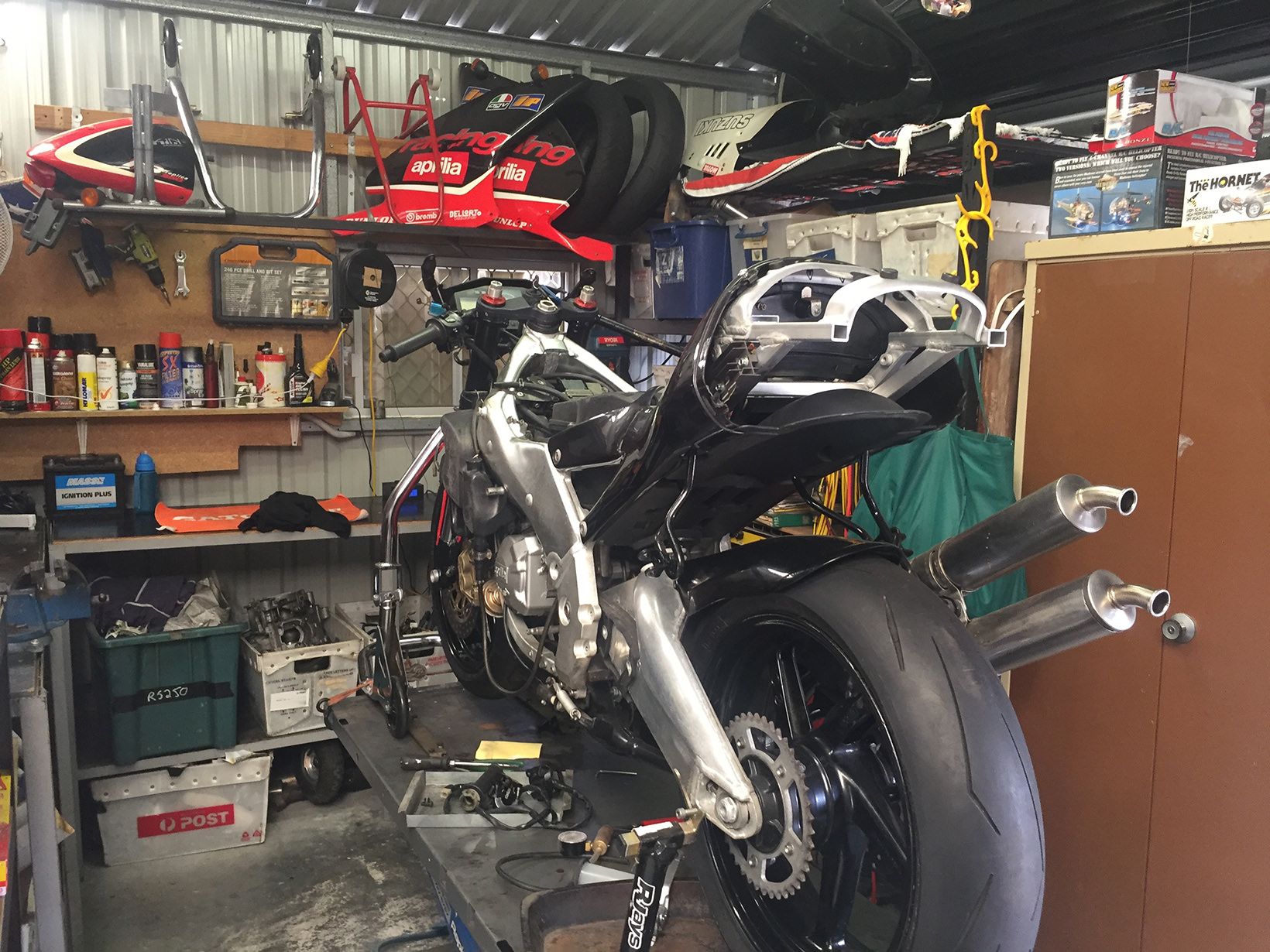 The bike starting to take shape, with the wheels in, engine plumbed and wired up, pipes on. Happy days and beer o’clock…

Next week the bodywork, fasteners, fluids and final touches come together and we head off for a very memorable ride on a sunny Sunday morning…