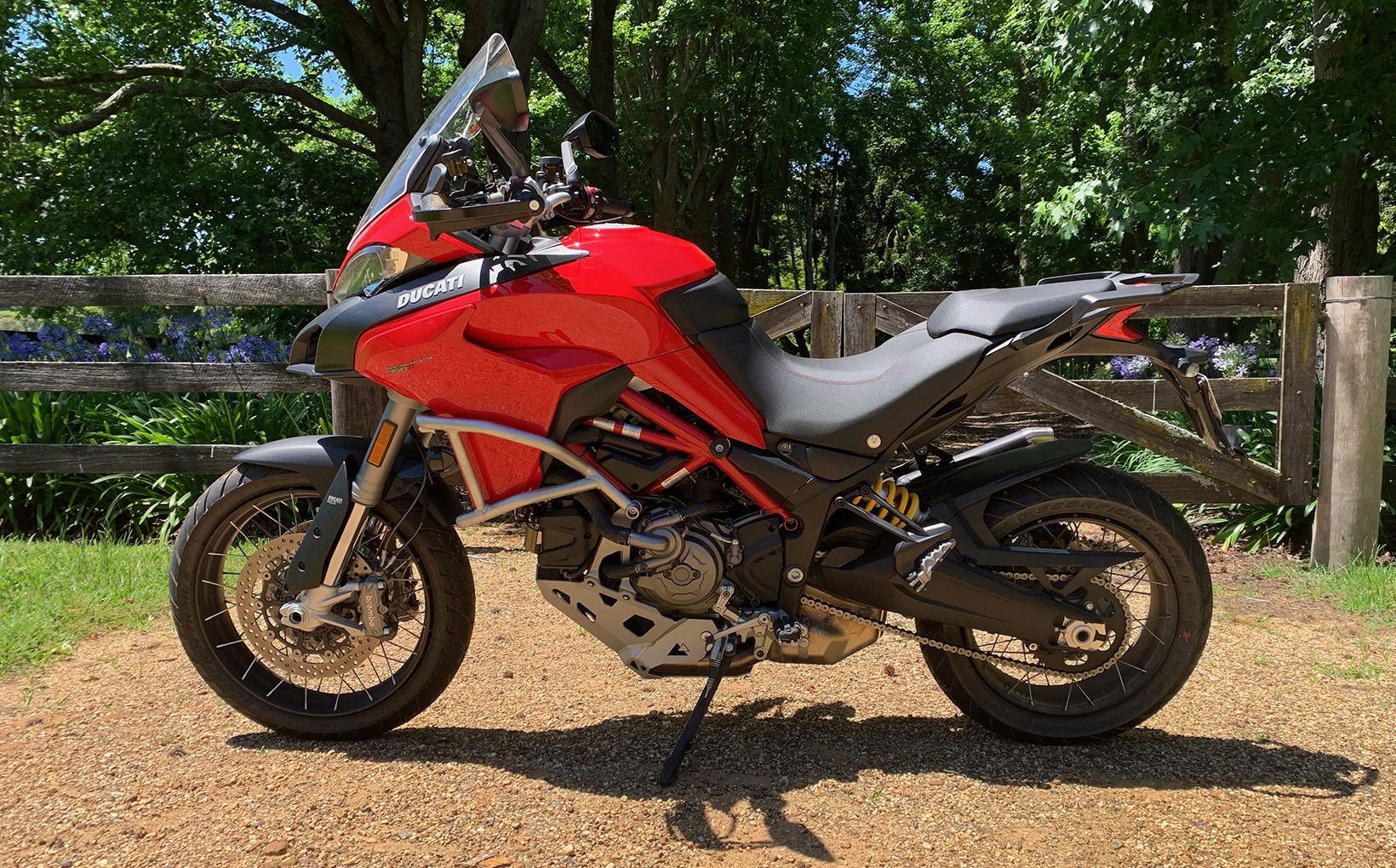 With the 950 available in a standard version and an S version since 2019, there is now a closer small capacity option to the big 1260 version Multistradas. The 950 S tested here is the 2021 Enduro Pack (extra $2,438.79), with crash bars, spoked wheels, radiator guard, LED spotlights and an alloy bash plate. 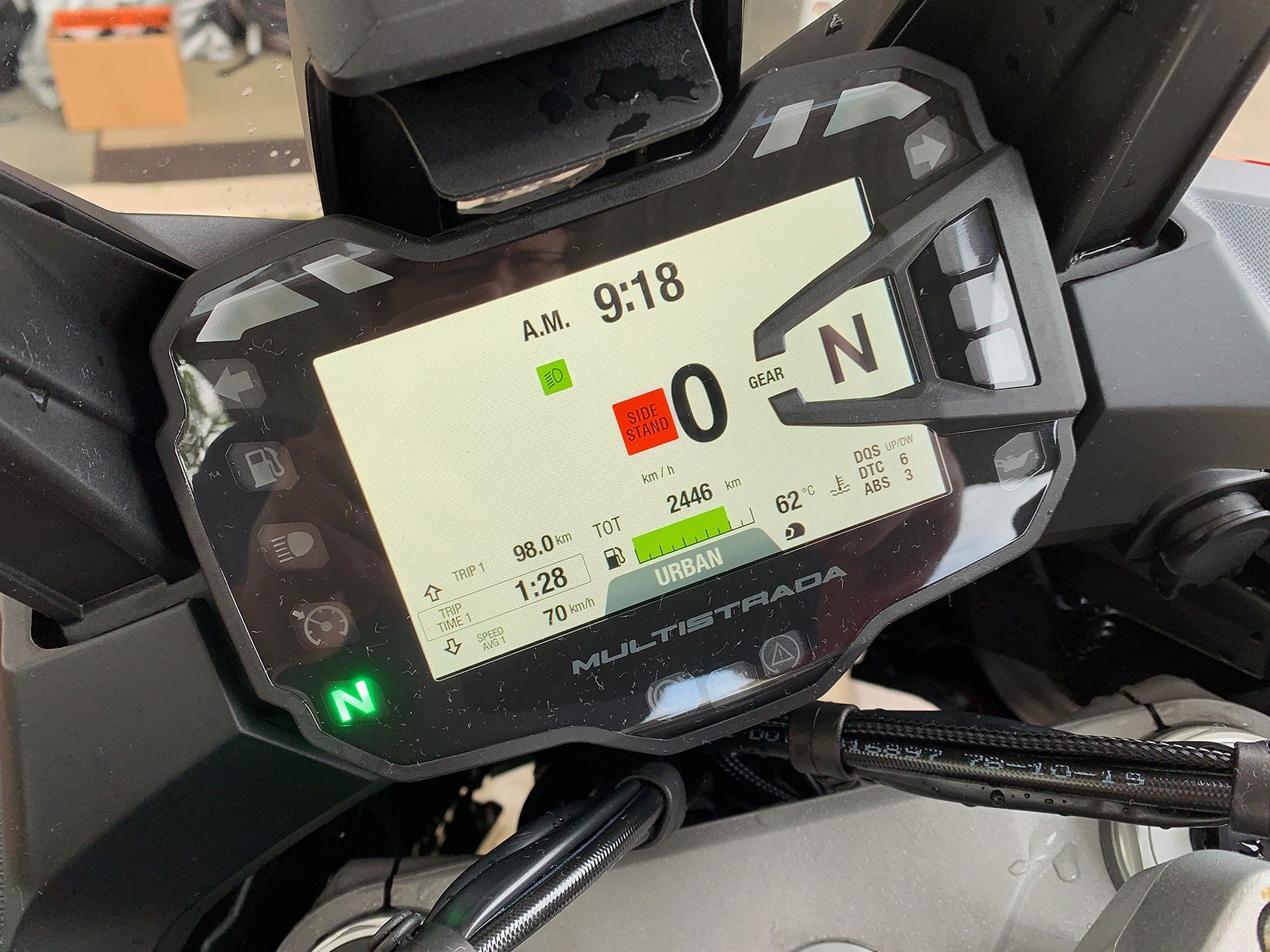 The fundamentals of the 950 remained with the 2019 update, which is a good thing considering what a fantastic motorcycle it already was. The extras, including a 6-axis Bosch IMU for cornering ABS and DTC, make it what it should be. The 950 is a mix of the Multistrada 1260 and the Multistrada 1260 Enduro, with the spoked wheels, swingarm, tail unit, grabrail and seats taken from the latter. The bike also scored a host of electronics to bring it up to the level of the 1260 models. It’s a fully loaded midlleweight adventure sport now. 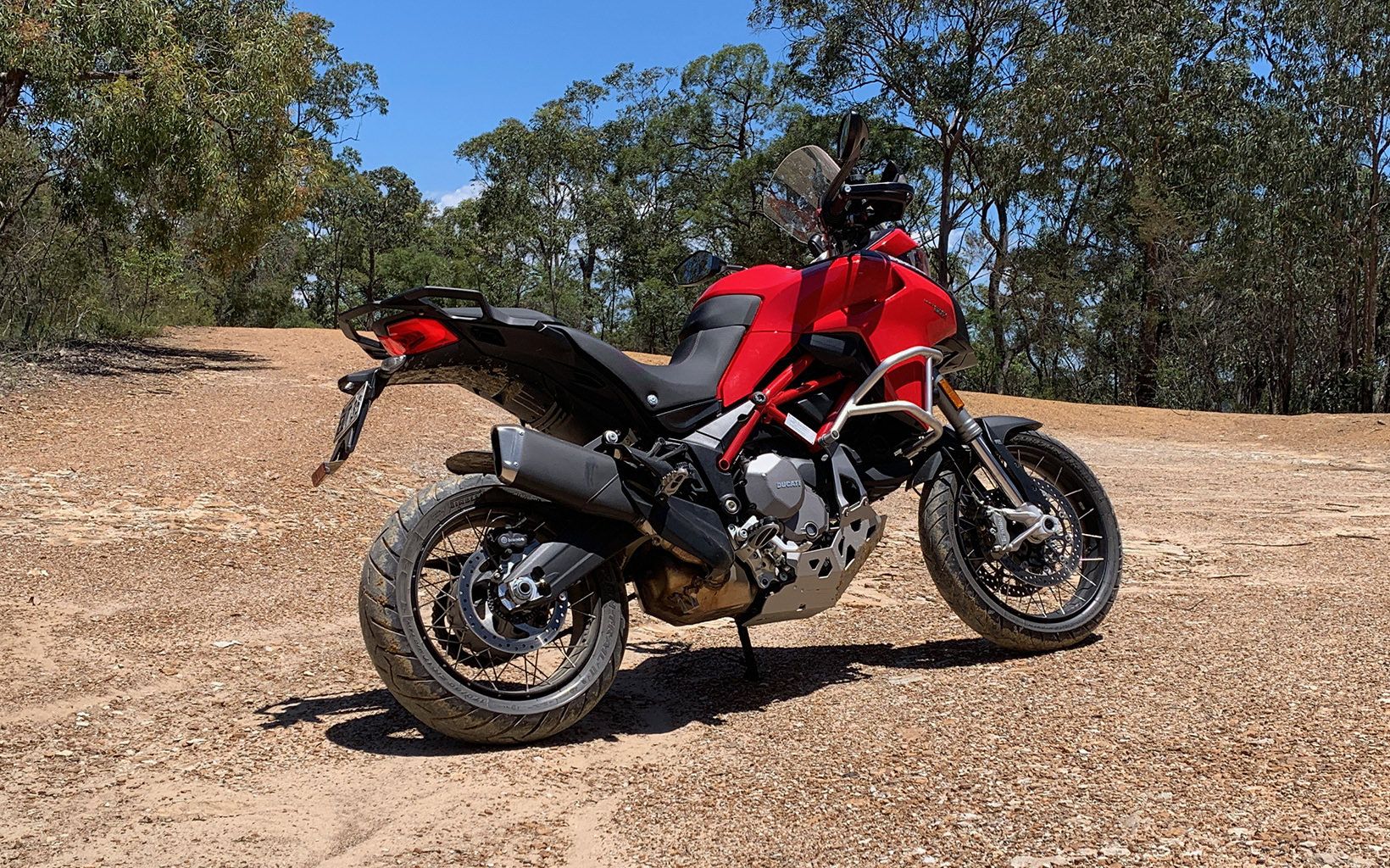 It’s a really fun, capable soft roader that could be ridden around most parts of Australia without an issue in terms of terrain.

The S version has the latest generation Ducati Skyhook Suspension, with multiple presets as well as the option to customise settings. It’s a fantastic system and well worth the extra expense.

One thing that was appealing about the first 950 Multistrada was the fact it was a European bike that was fun, versatile, flexible and most impressive – under twenty grand. However, without the option of up-speccing it for those not too fussed about the budget, it left many customers with no choice but to go for the big 1260… The stock 950 now comes in at $21,500 R/A, the 950 S at $24,000, 950 S Spoked Wheels $24,900 and eight grand less than the base 1260 Enduro, so a fair lump of coal. 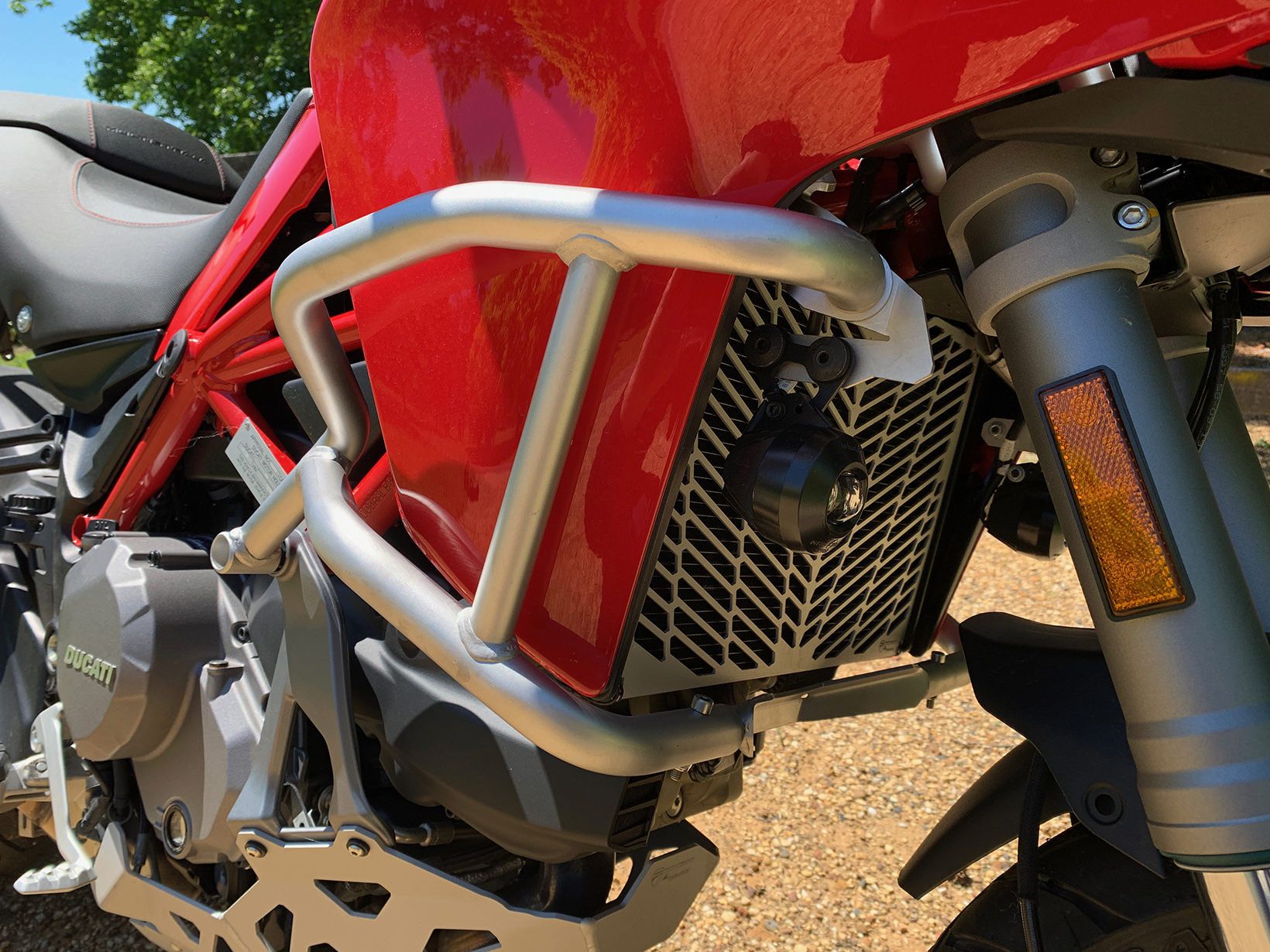 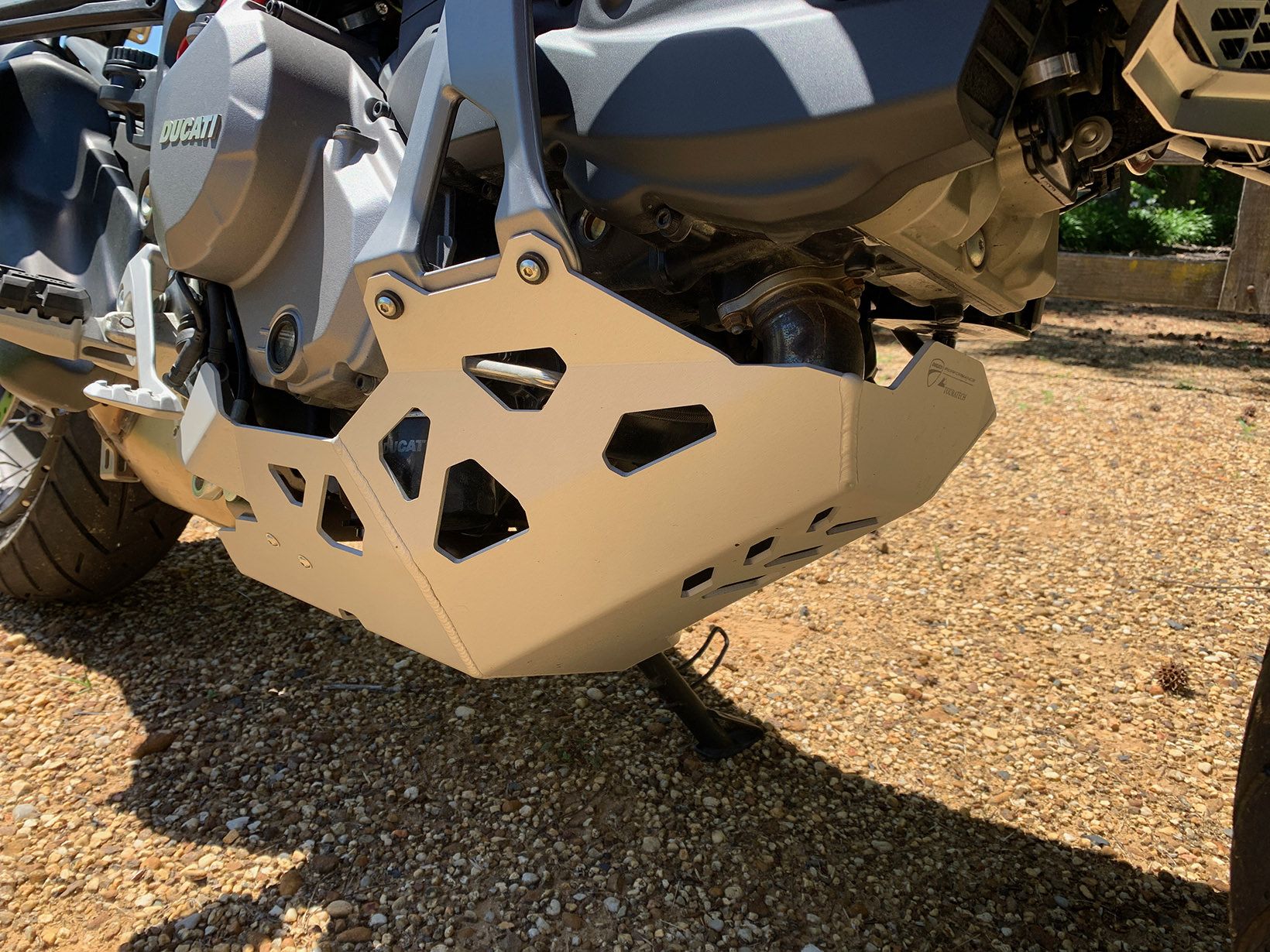 I always found the big 1260 Enduro to be a bit of a handful off-road and I knew I would prefer the 950 S with similar level electronics. It is still a big machine, however, at 255kg and with a 30L tank, it is tough to move that 1260 around on the tighter trails. The 950 is 30kg less with a narrower tank. In fact, I once had a 1260 Enduro break down on me and I could not get it out of the trail I was on.

The much-loved 937cc 11º Testastretta engine remains untouched. It is a lovely motor and perfect for this type of application, with enough grunt down low and through the middle on dirt roads and around town. Top-end is fairly flat but shifting through the smooth gearbox via the DQS keeps the power in the meaty part. Final gearing is tall, so the engine is never working hard. At 113hp and 71ft-lbs, output is ample, despite the heavy bike. It’s not going to set any acceleration records but the 950 S gets along fine. 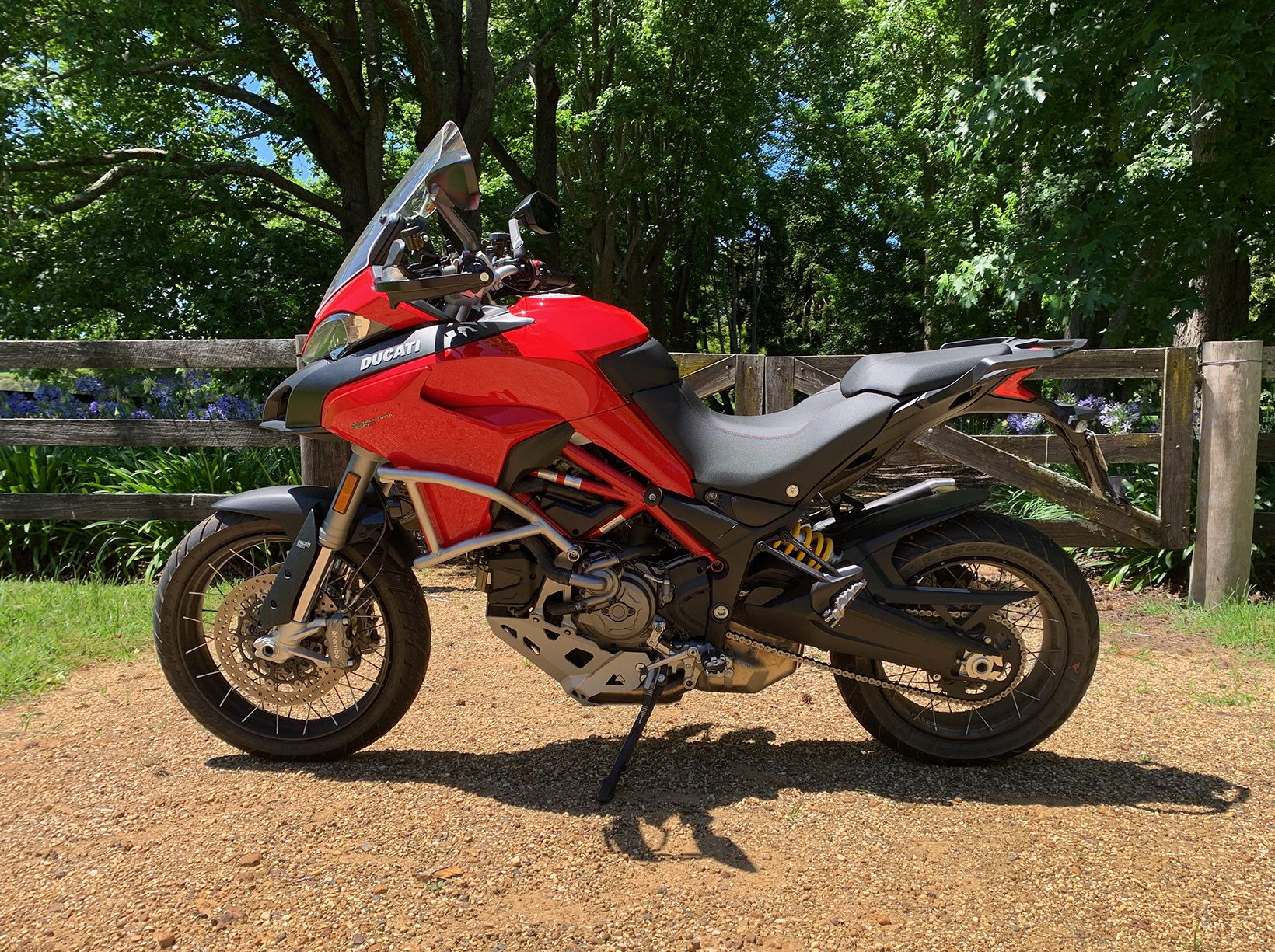 You can see in this shot just how high the top of the tank is in relation to the seat.

Urban mode is low power and a soft throttle but just enough to cruise around town and I find I don’t tend to act as silly in Urban, it relaxes the ride and dumbs things down. The DQS is brilliant in town and smooth both up and down, the clutch, now hydraulic, is quite heavy and grabby, as per the 2017 model. The engine will labour and struggle a bit in Urban though and needs to be revved above 3000rpm to really cope with the weight of the bike and tall overall gearing.

One thing I noticed quickly on this bike was the seat height. It was possibly the low version of 820mm, although I measure it at 830mm, but may have done that incorrectly. Stock is 840mm. Either way, it was too low for me and my legs were cramped. It also locked me into the one seating position, which I didn’t like. 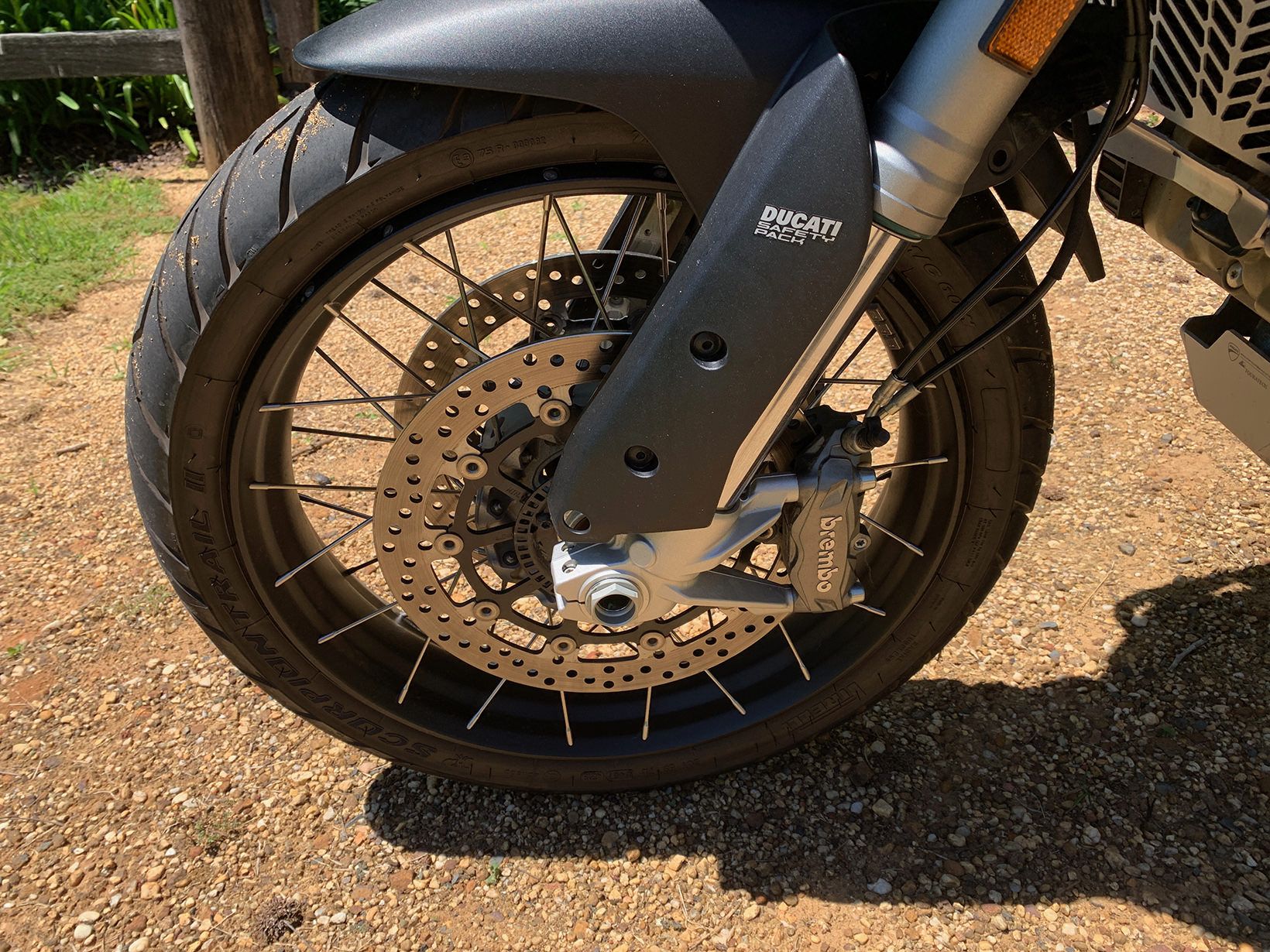 The addition of a radial-pull high spec front master-cylinder has cured the brake issues of the first generation 950MS. 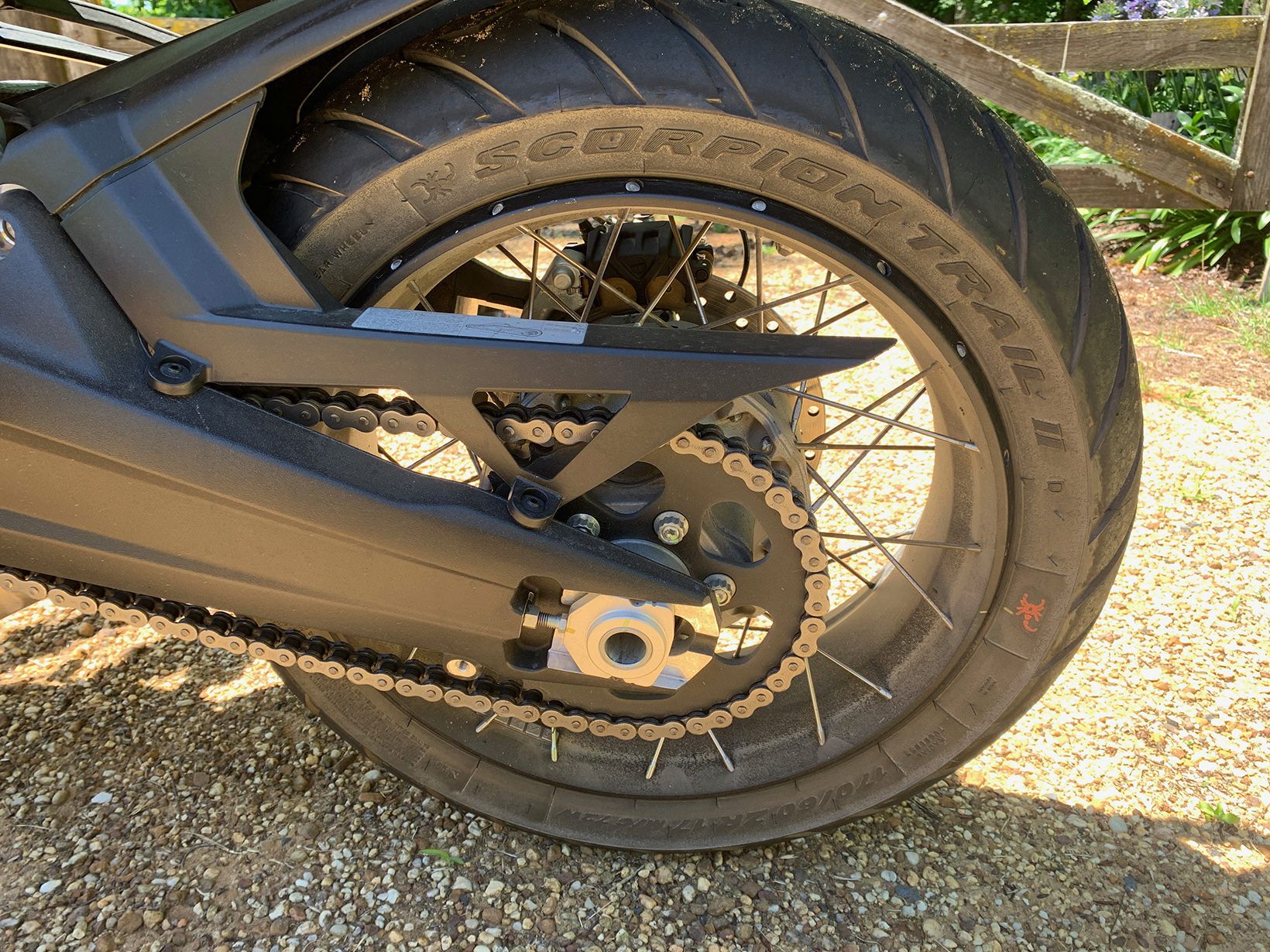 17in rear wheel and Pirelli Scorpion tyres. A great combo out back.

Touring mode is good around town and in general riding situations and I found myself using it a lot for suburban use. It gave that bit more go when trying to keep ahead of the traffic. I also found it good in wet weather, when the extra level of DTC intervention could be felt and the softer throttle helped, while still having plenty of power on tap. All of this time the DSS was doing its thing and I honestly could not tell any difference as it adapted to each situation in general riding. It’s a very refined system. 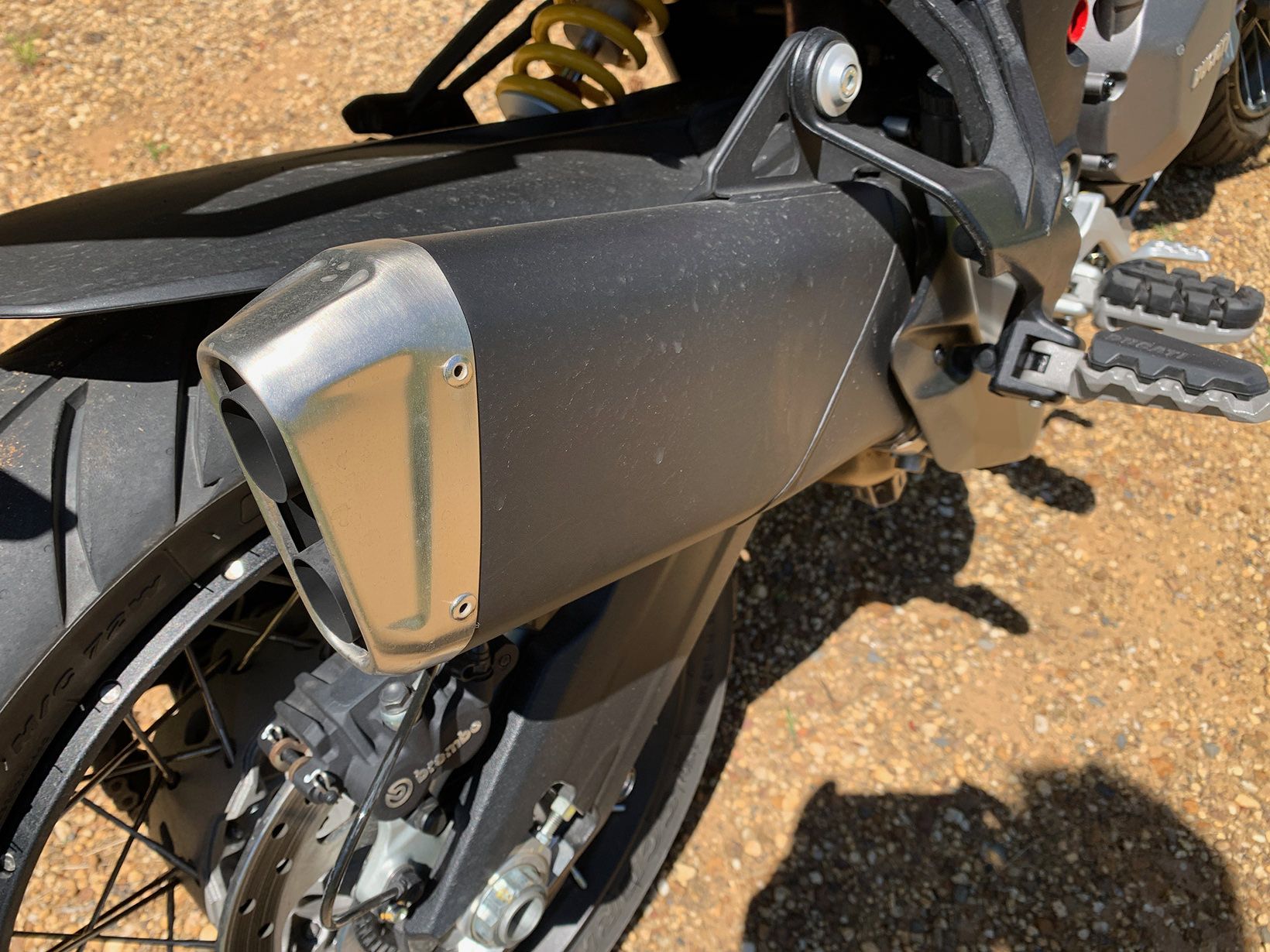 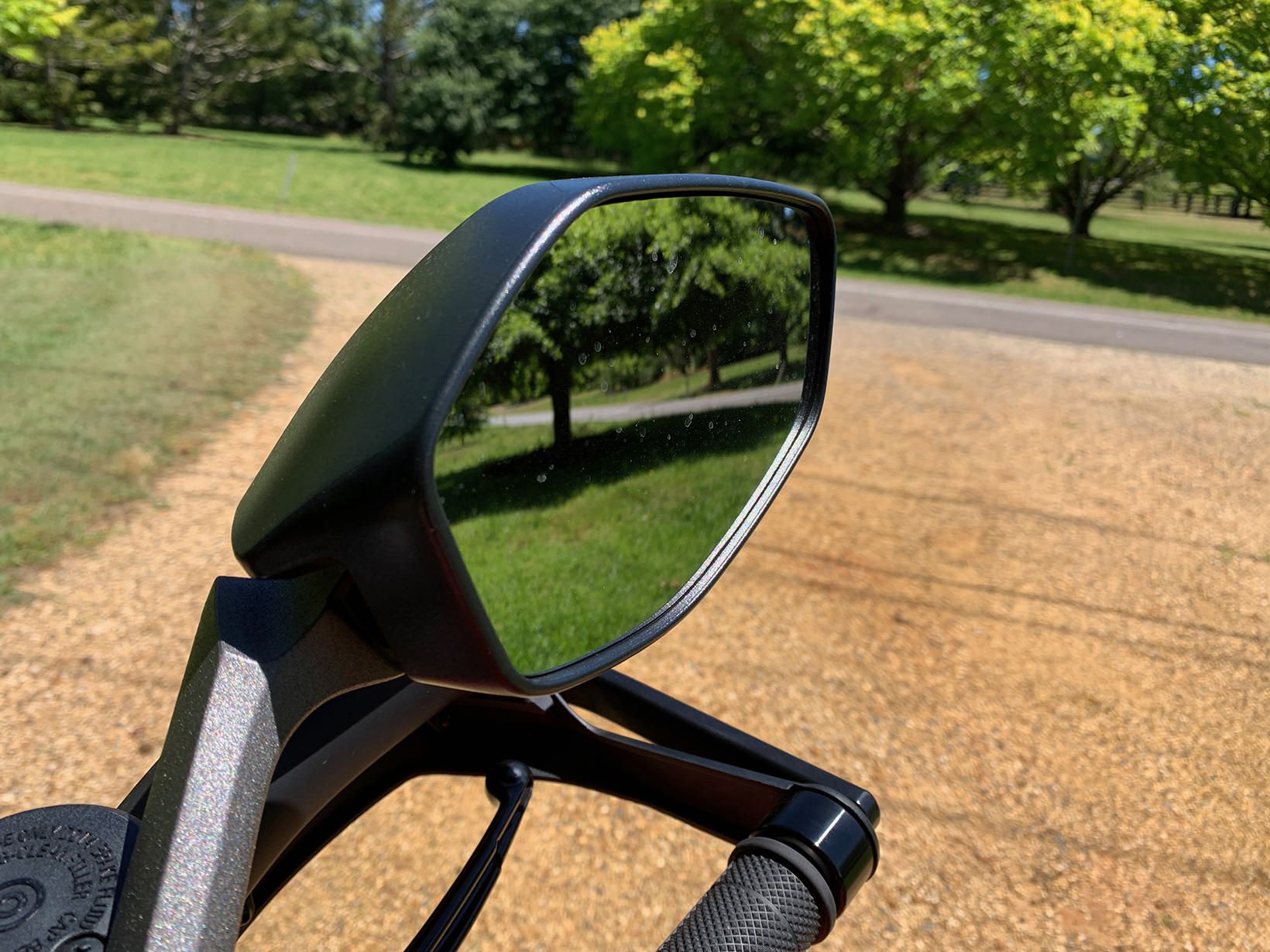 Mirrors are small and vibey.

The 950 S comes alive properly once Sport mode is selected. The throttle response wakes up and that lovely engine gives everything it has. With less DTC intervention, progress becomes more rapid and there is noticeably more oomph from 3000rpm right through to 9000rpm. I’ve mentioned it twice already but it is here that the DQS really adds to the riding experience and makes that sweet Testastretta sing. 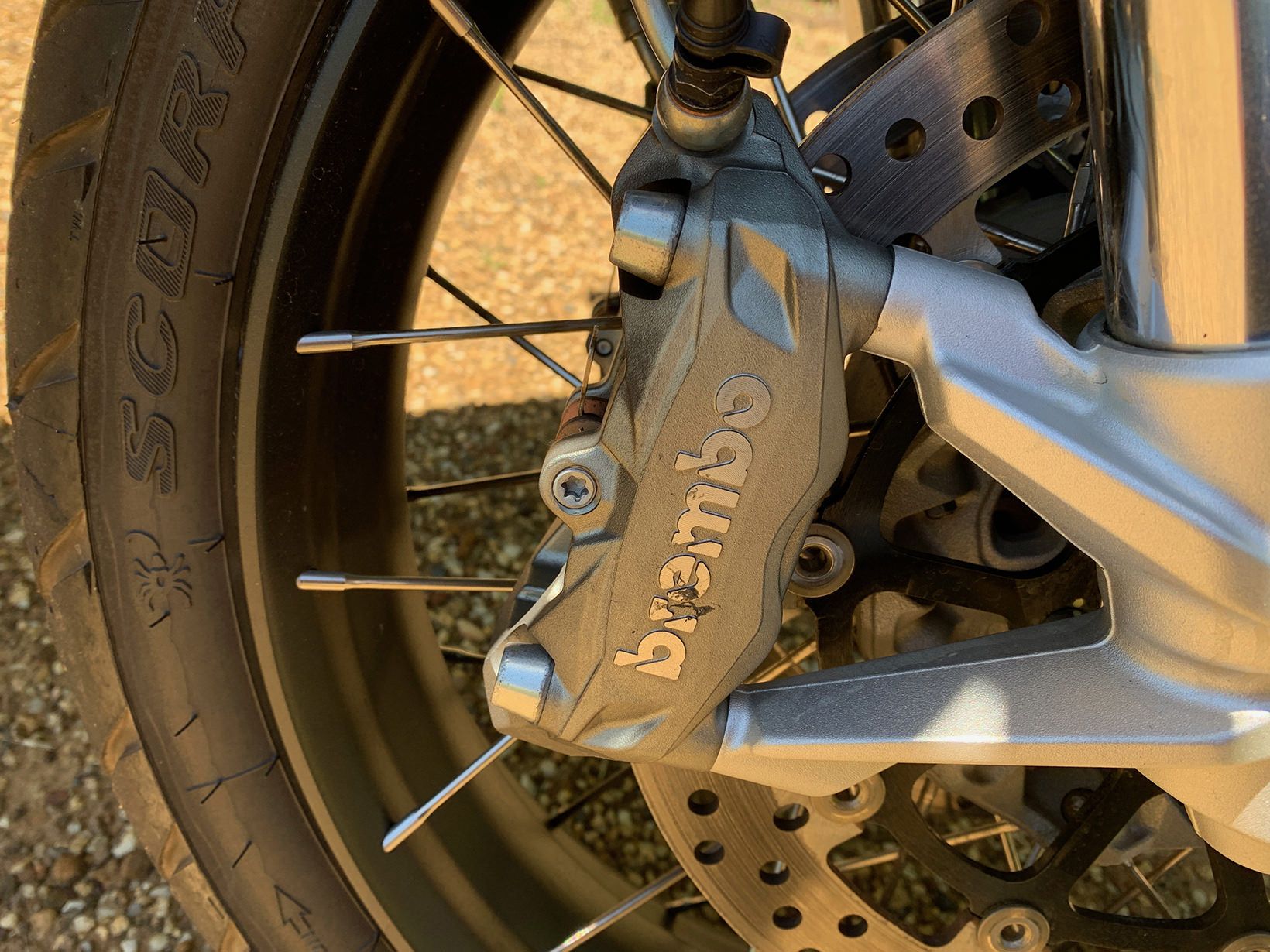 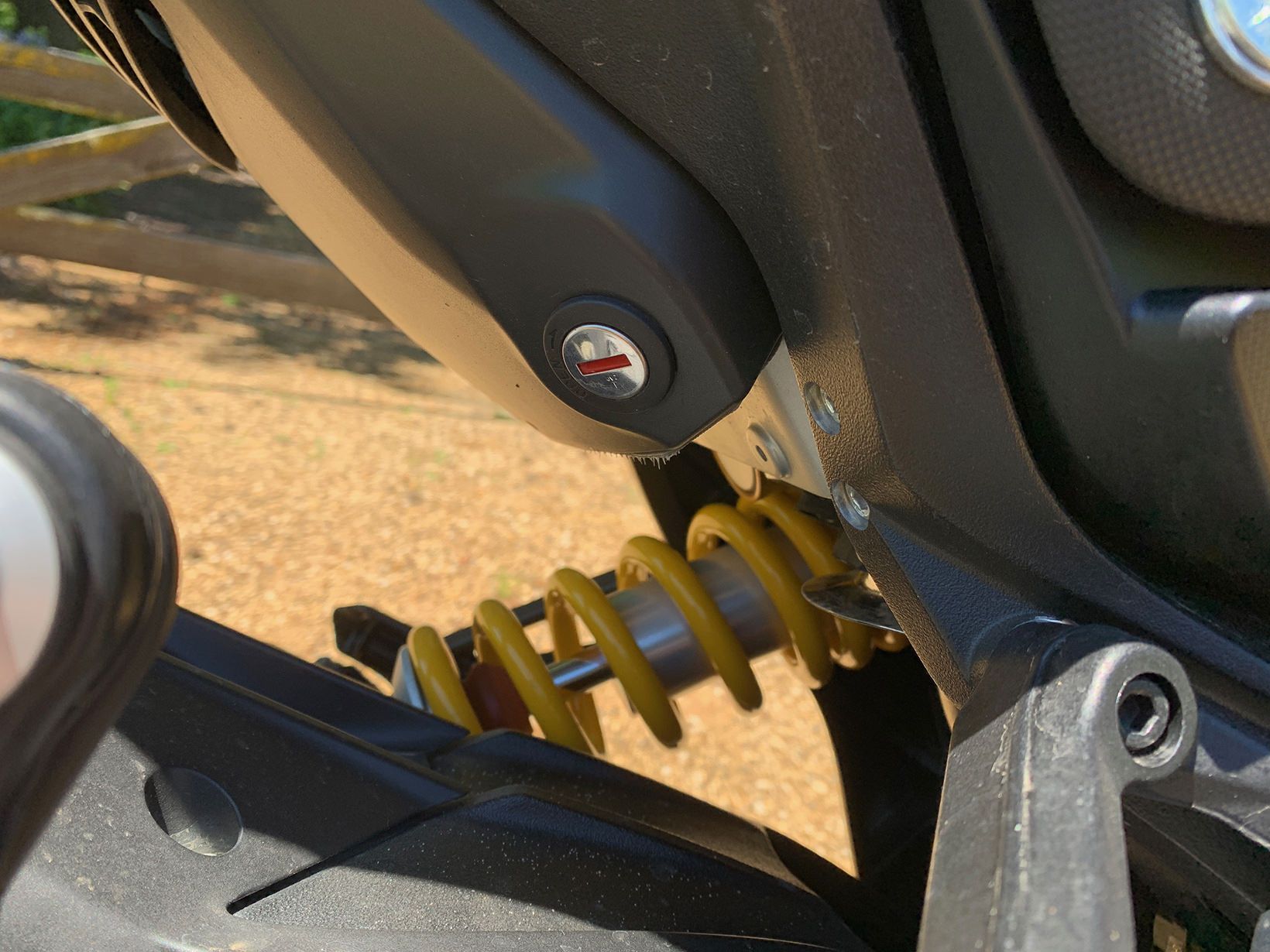 On the flowing, bumpy country roads there is not so much DTC intervention but it is nice to know it is there, updated and ready to help if there is a sudden loss of traction. The DSS is amazing, offering a plush ride at medium and high speeds, yet with enough support to handle some hard braking and acceleration. It keeps both Pirelli Scorpion trail II tyres firmly on the ground on our rough roads…

Up the pace on the smoother twisties and the 950 S is impressive. The DSS, with 170mm of travel to play with at each end, works in the background constantly adapting damping to the situation, along with the cornering ABS and DTC, it’s like the bike is basically glued to the road and when it does move around, it doesn’t move far. 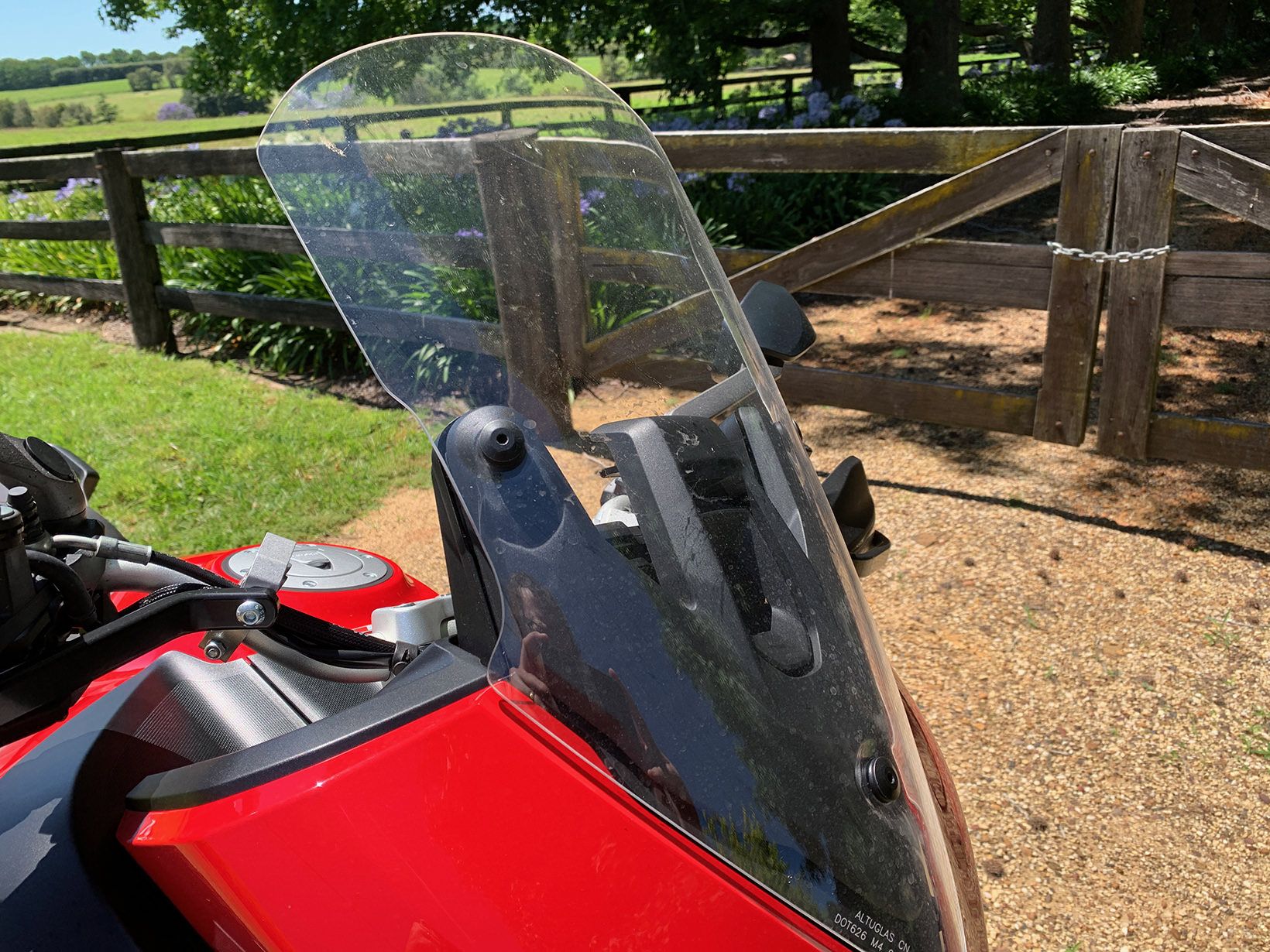 The same sharp yet stable nature (thanks to sensible geometry but wide handlebars) remains, so flicking the 950 S into the through corners can be done as quickly as you dare, with minimum effort and maximum mechanical (and now electronic) grip. Clearance is good, and now the brakes are too. Where the first model front brakes were problematic at least on our bike, with over 5cm of lever travel then an ‘on or off’ application from the cheaper master-cylinder, an upgraded radial-pull item now makes proper use of the high spec Brembo calipers and they work very well. 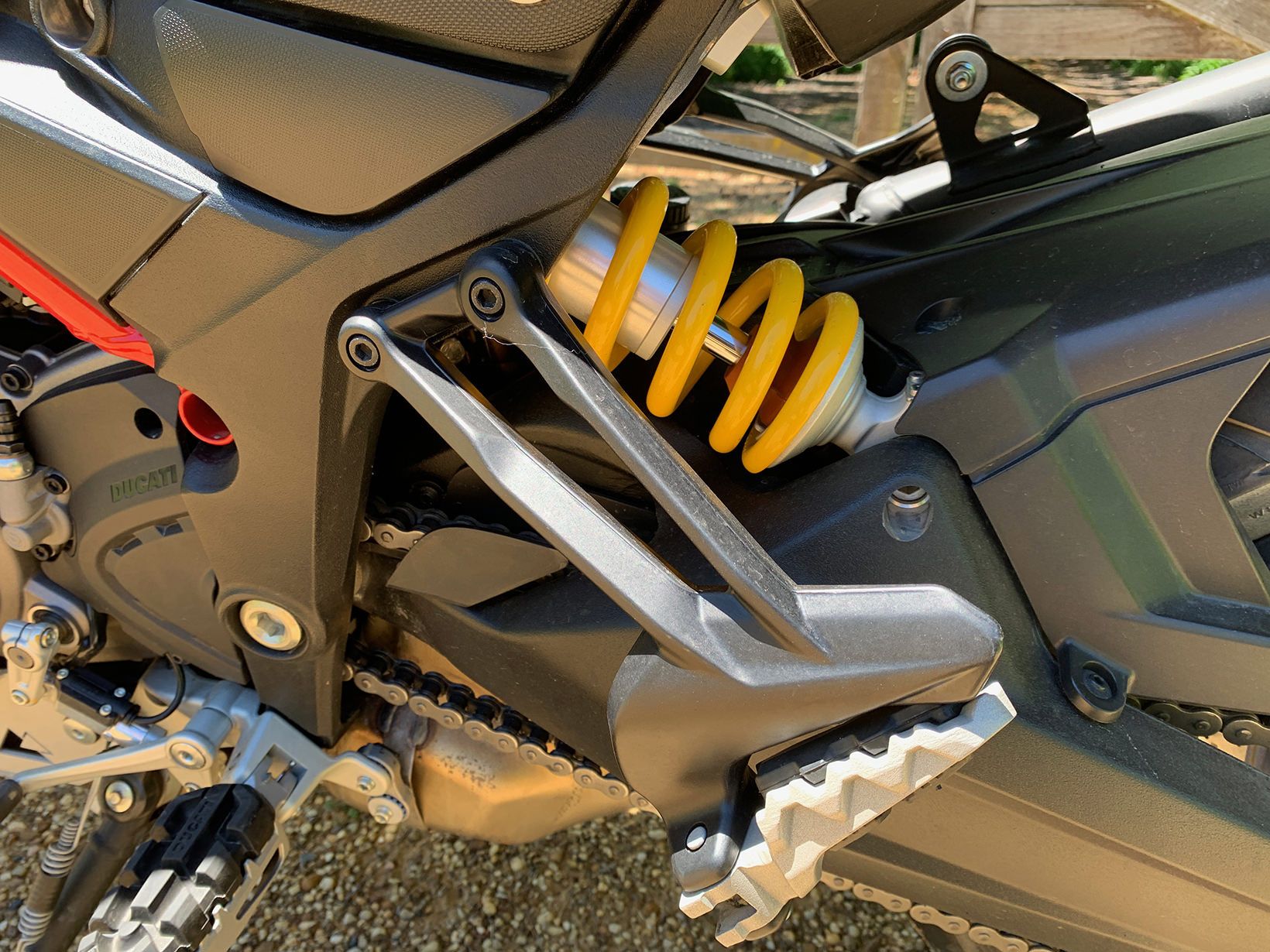 The Ohlins shock is fantastic. 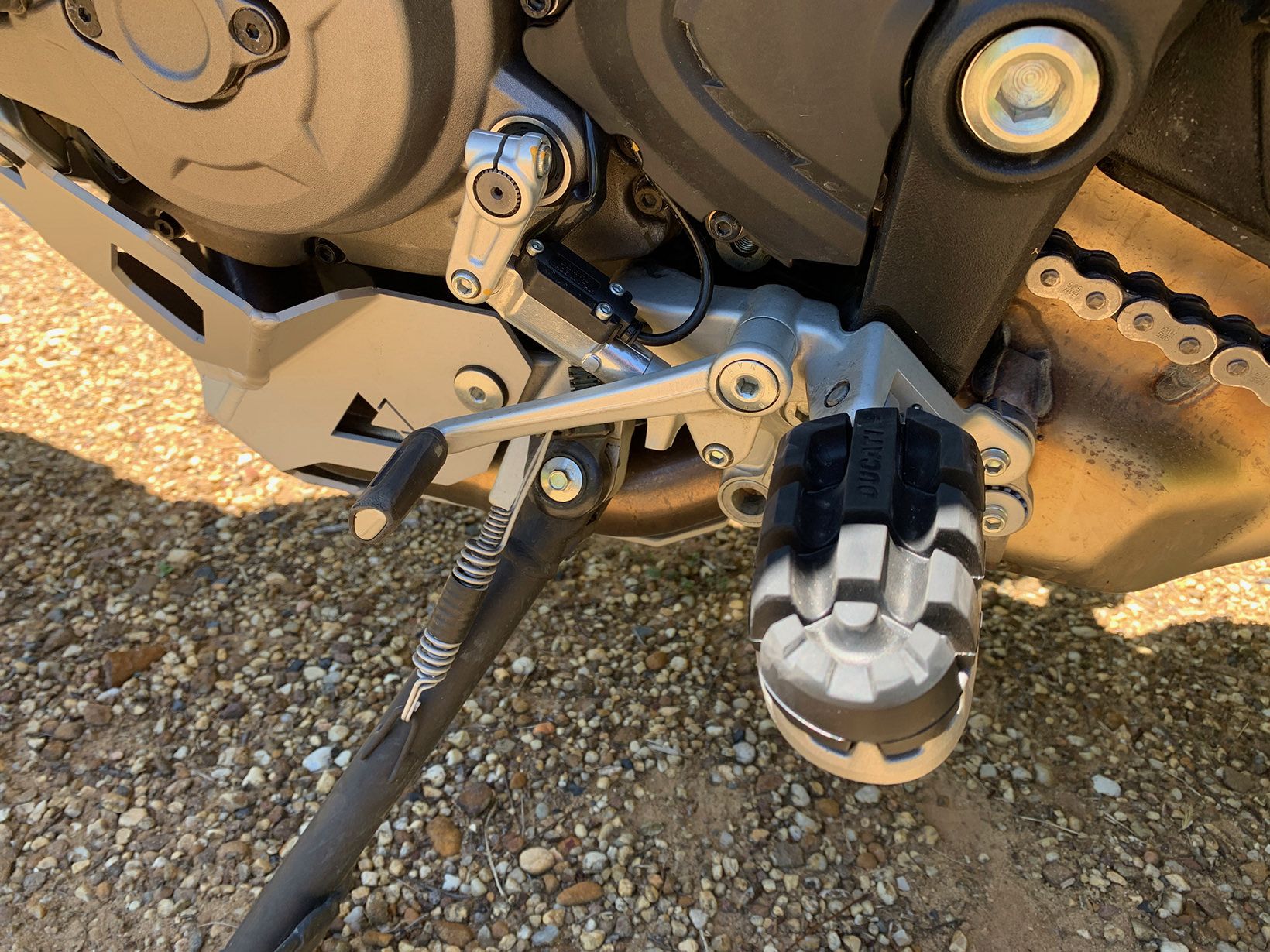 On the open highway, on cruise control, the 950 S is a pleasure to ride. The screen does a good job and the bike is relatively vibe free, although there are more vibes in the mirrors than the 2017 model I tested, for some reason… The addition of cruise control is a huge plus and the engine is barely working at all with the tall top gear and final ratio. 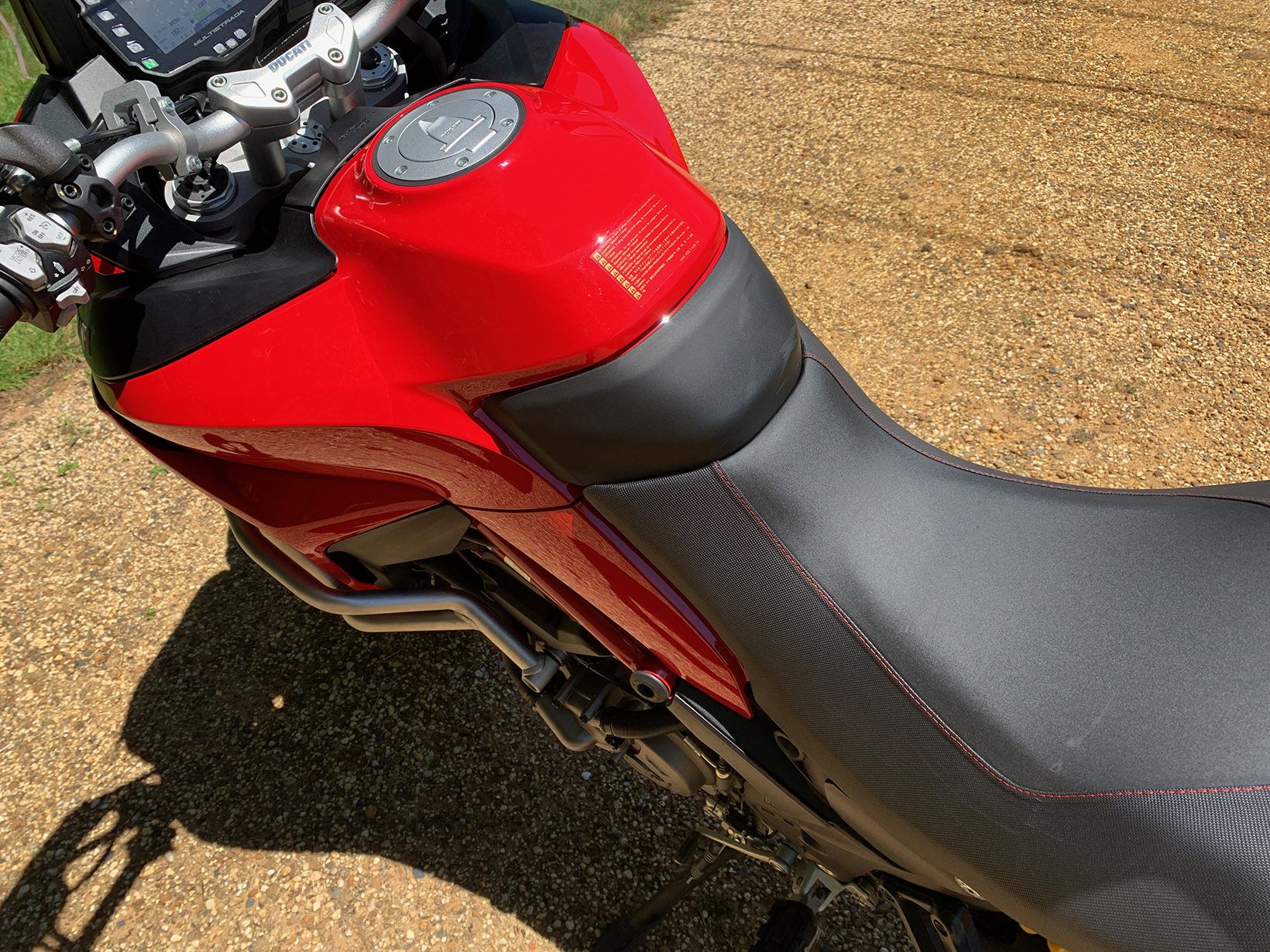 Low seat on ours but there are plenty of options. 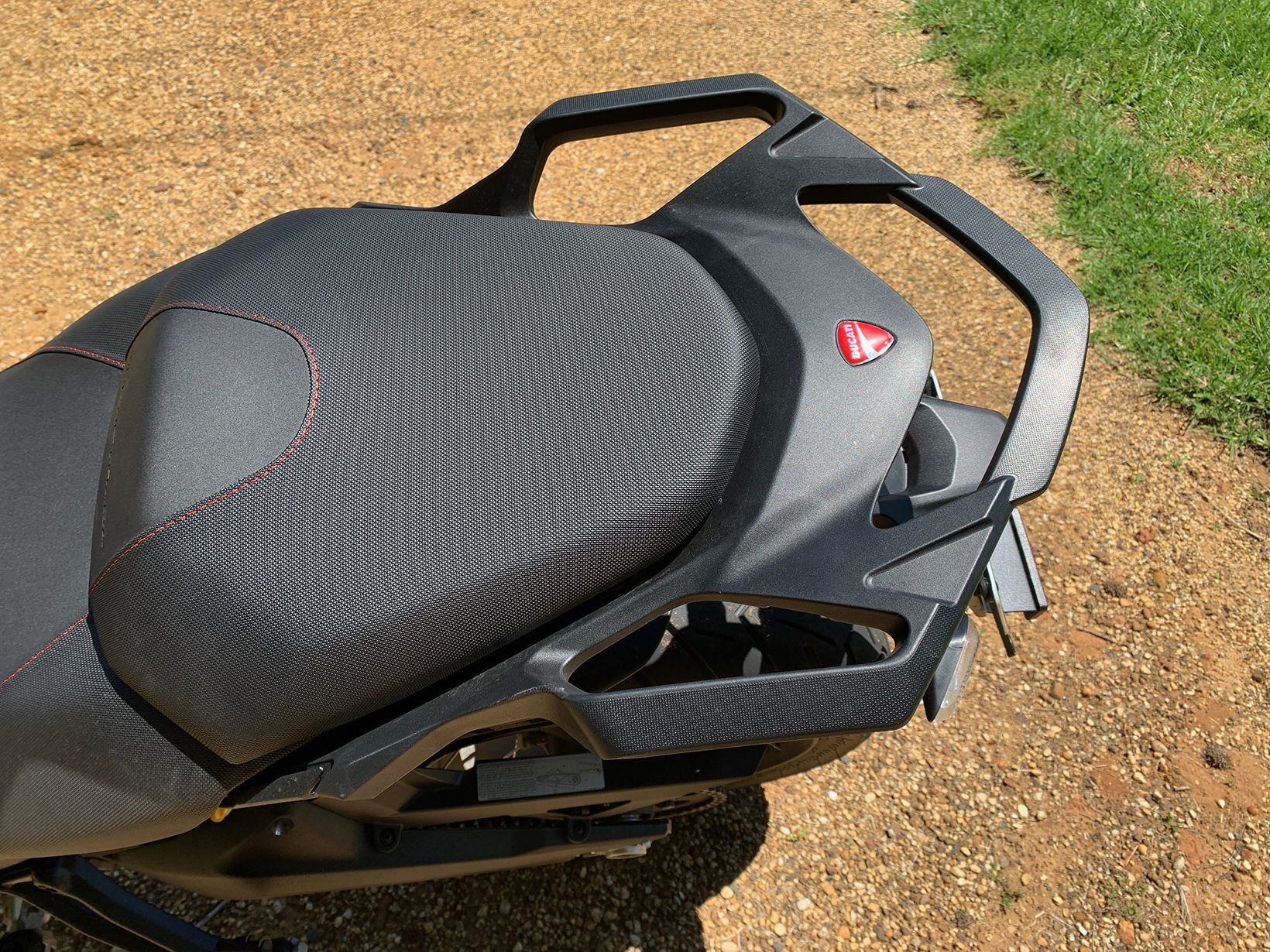 Off-road, in Enduro mode, the 950 S is great fun, with DTC and ABS intervention reduced enough to allow fast, flowing riding on the dirt roads and low speed work on fire trails and DSS nice and soft. It just lacks power, so I mostly rode off-road in Touring mode. I had a lot of fun, with a 40-plus km fast dirt loop and a good few hours mucking around on fairly well maintained fire trails, which is about the limit you would take the 950 S to.

Having the Enduro Pack sump guard and crash bars really gives extra peace of mind too. Overall, the bike is good as a soft roader, and the 19in front wheel really helps here. With a comfy reach to the handlebars and enough suspension support to prevent hard bottoming out at sensible speeds, the 950 S can be pushed fairly hard. 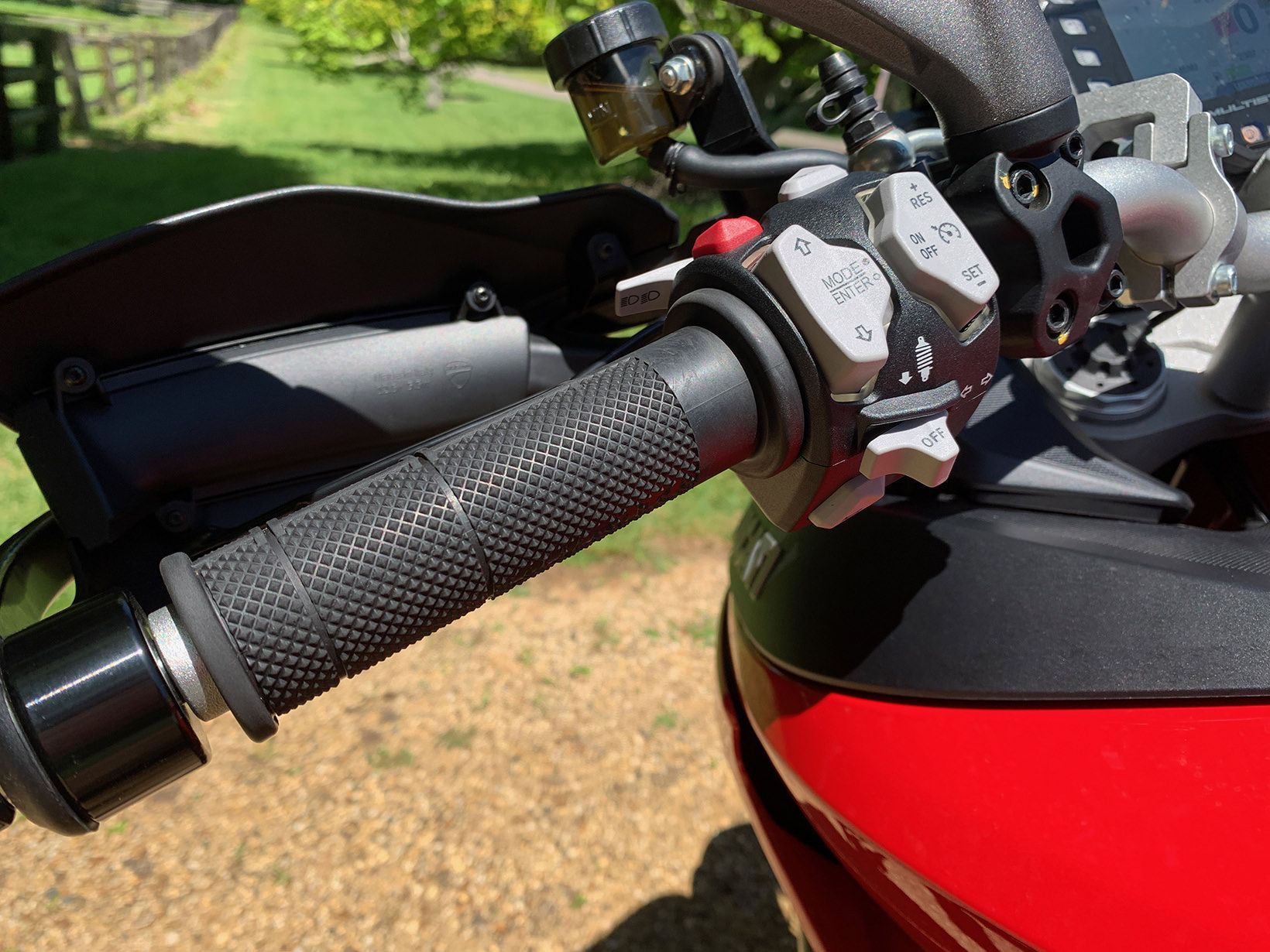 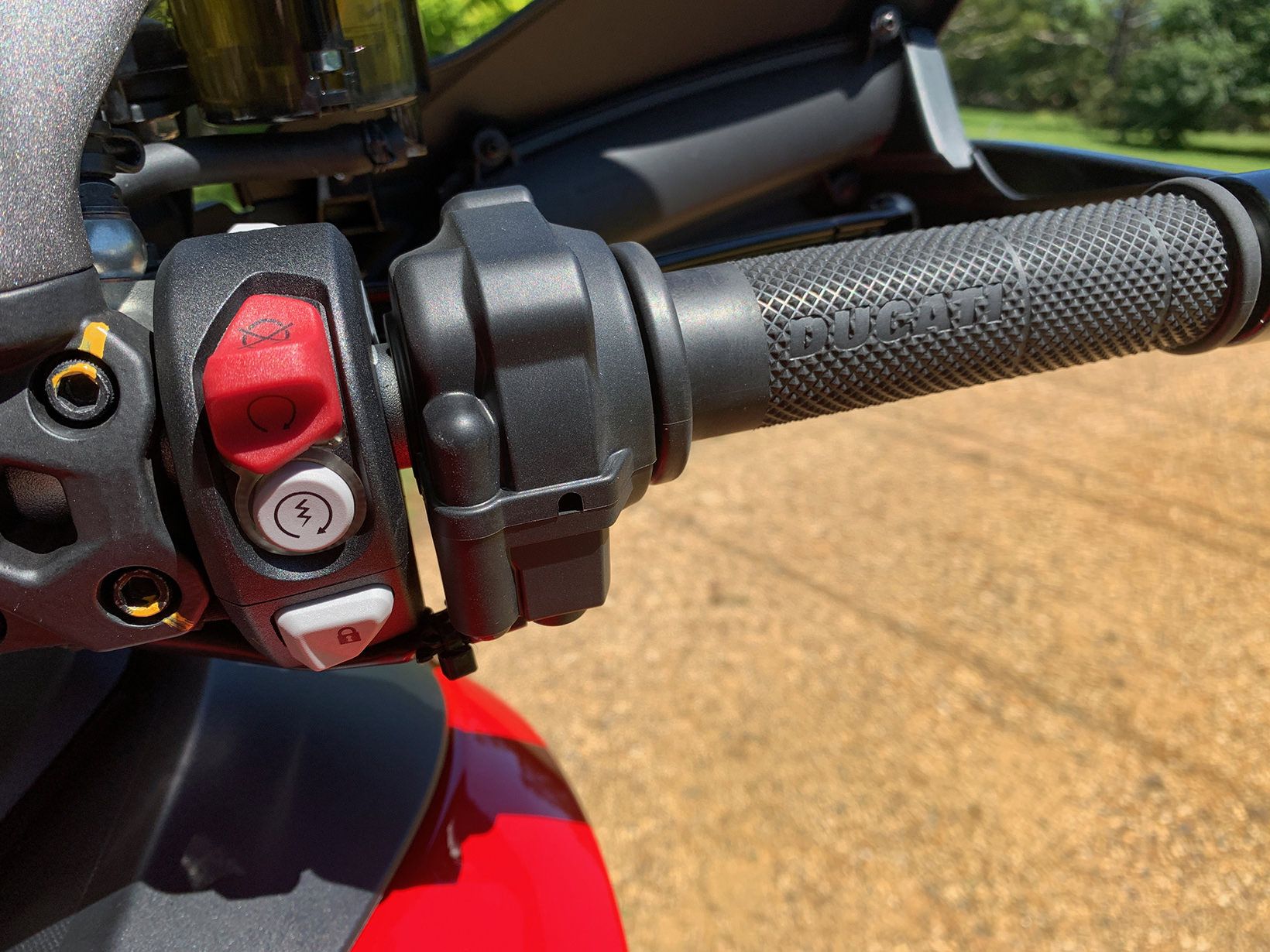 Decent protection thanks to the hand guards.

The current Multistrada 950 S is a fantastic bike, with welcome upgrades over the previous standard 950 we rode and although it is a lot more expensive, there is a lot more in terms of features and electronics. The Evo2 DSS is brilliant, as is the DQS and the cornering ABS system. The quality and finish is typically high as expected from Ducati and the bike proved versatile and tough… 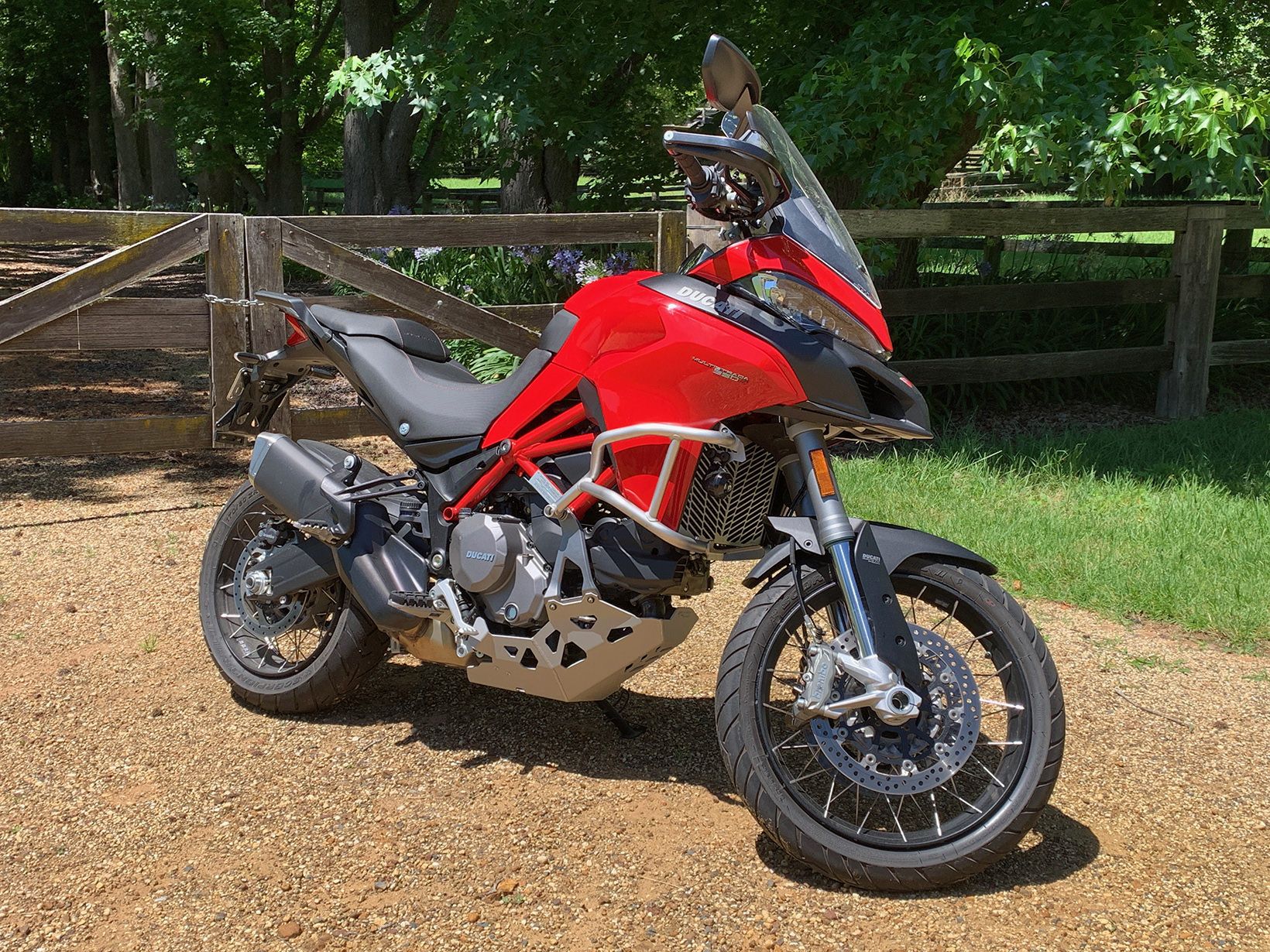 Now with a 19in wheel and more technology the 950 S is a genuine option for the potential 1260 Enduro buyer.