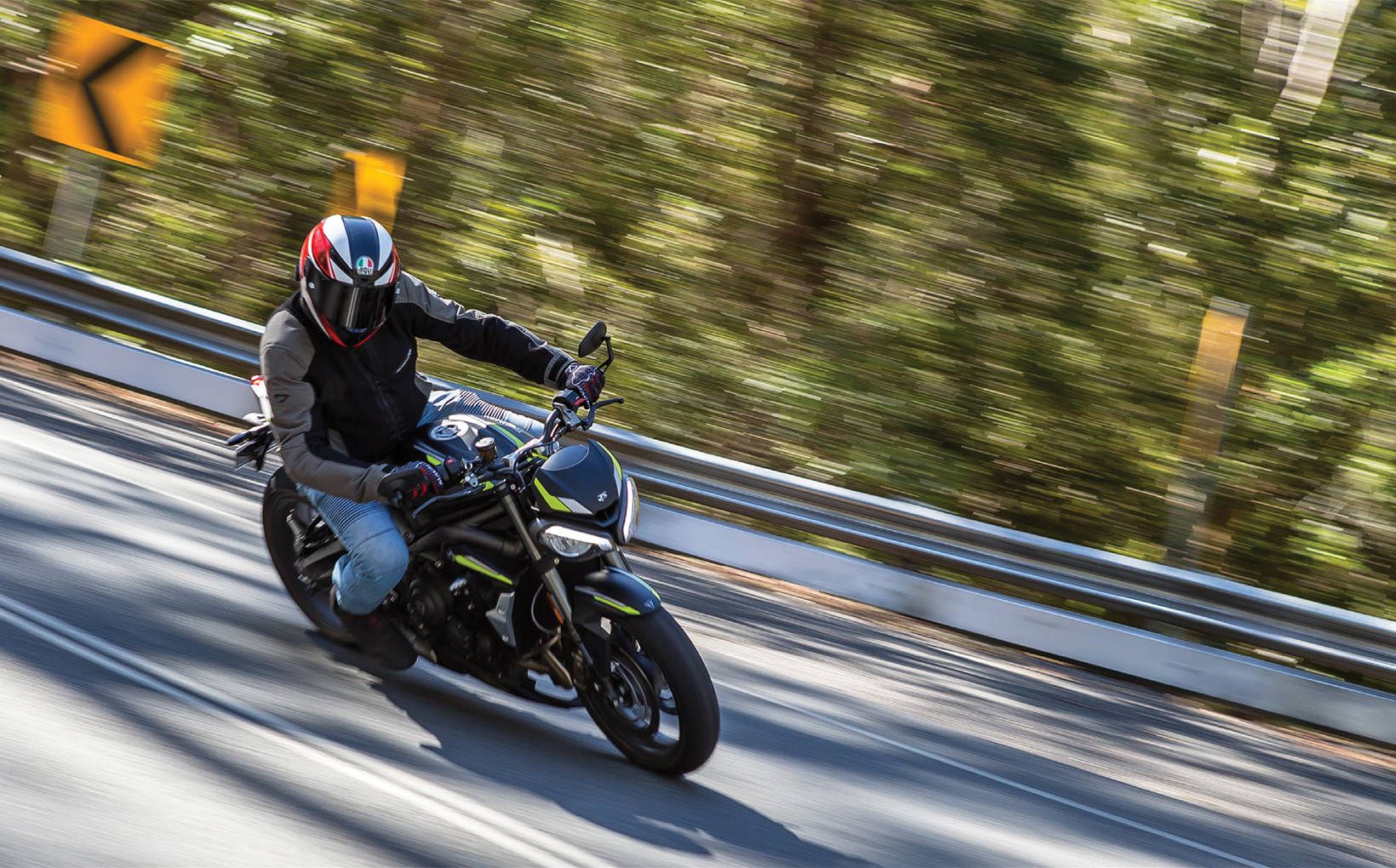 Moto2 has wailed with the libidinous sound of three cylinders since Triumph became the official engine supplier for the 2019 season and the fruits of the collaboration are already starting to filter down into production bikes such as the 2020 Street Triple RS and the soon-to-lob Daytona 765.

The new nakedbike is a significant developmental step rather than an all new machine, but the RS wasn’t in need of a lot of work anyway. The outgoing model – first introduced in 2017 – is a superb motorcycle, with our own editor Sam Maclachlan praising its agile handling, great brakes and “ripsnorting engine” (AMCN Vol 67 No 04). The handling and brakes remain at the awesome end of the spectrum and that so-called ripsnorting engine now comes with extra snort. 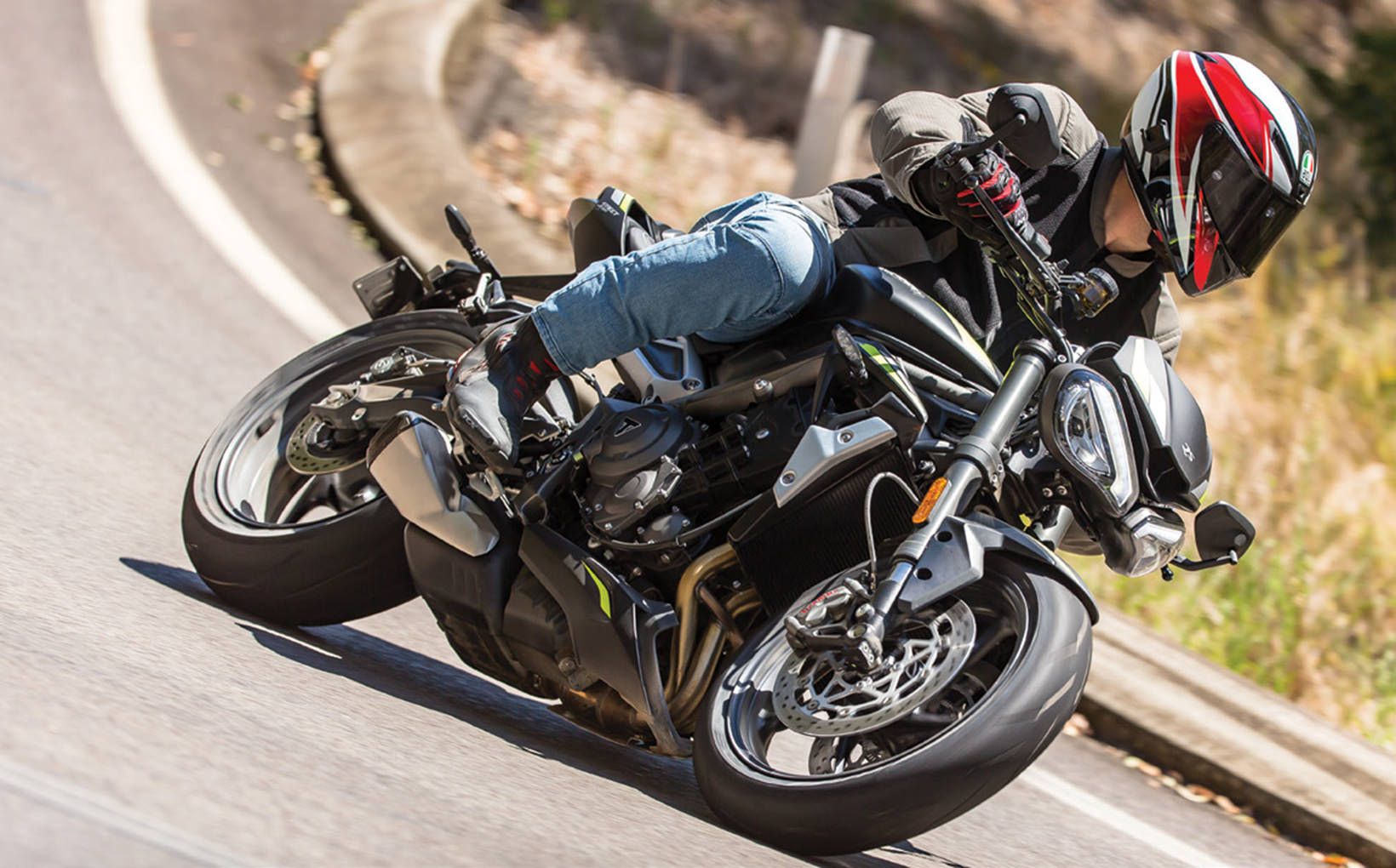 New exhaust cams and a redesigned intake duct have fattened up the mid-range.

According to Triumph, the team responsible for the Moto2 engine was brought in to work its magic over the Euro5-compliant roadbike engine, focussing on improving the Street Triple’s useable mid-range power rather than looking for more top-end.

And whether it was the grand prix engine builders’ doing or not, new exhaust cams and a redesigned intake duct have fattened up the mid-range with a healthy nine percent increase in power and torque at 8000rpm. Peak torque grows by two newton-metres to 79Nm at 9350rpm, while peak power remains more or less the same (90.5kW versus 90.4kW). 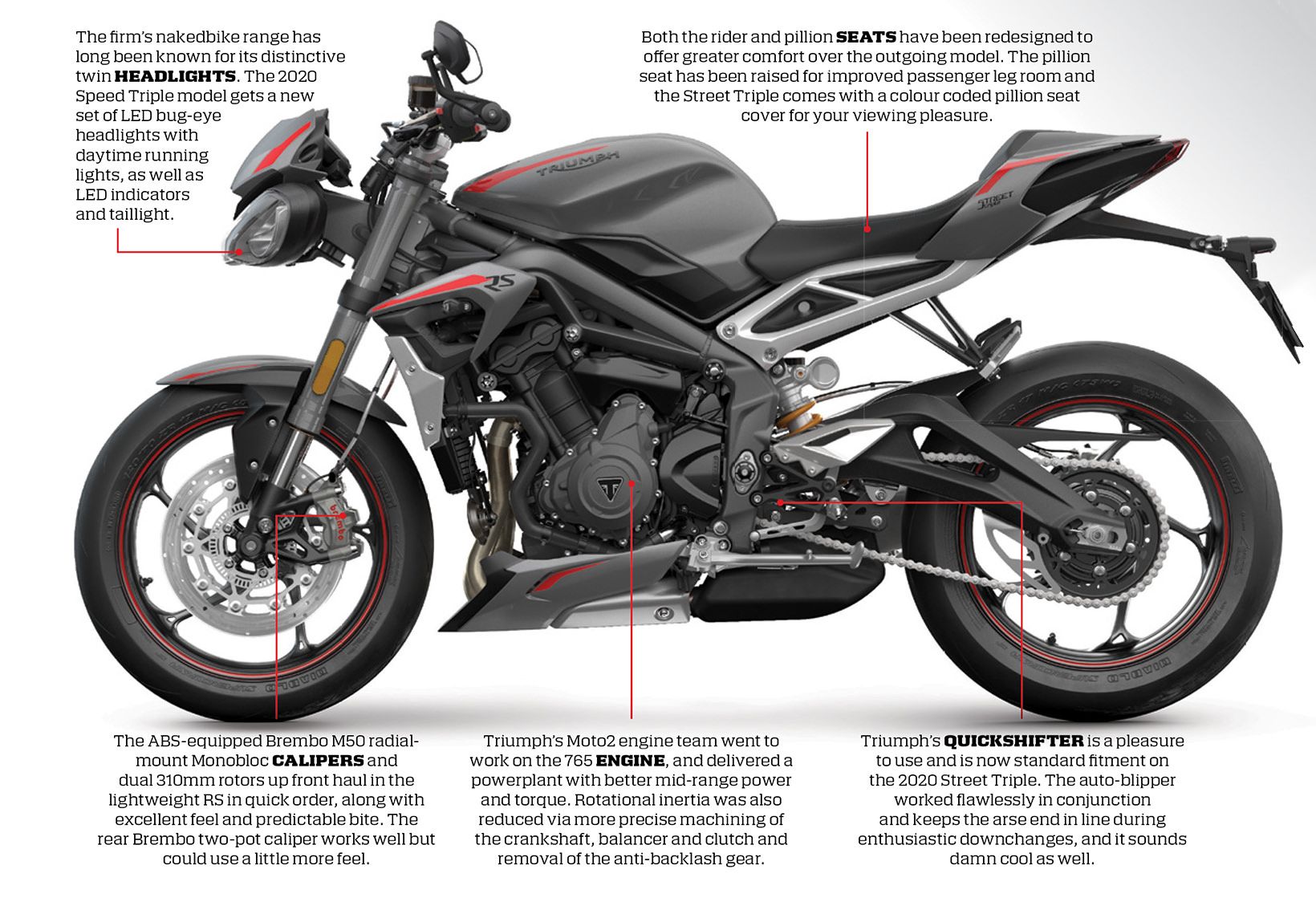 There’s also a gaggle of non-engine related refinements like the new Öhlins STX40 rear shock, updated bodywork, new headlights with daytime running lights, and a multi-directional quickshifter, which is all aimed at keeping the RS at the head of the mid-capacity nakedbike pack.

At a quick glance, the new Street Triple doesn’t look all that different to the old model, though the eye is drawn to the new DRL-equipped headlight. The finish is still excellent and, while I know looks are subjective, I reckon the paint scheme is as exciting as a cold saveloy. I didn’t scoff at or even dislike the Trumpy’s looks, but I didn’t swoon either, and I reckon if I’m forking out $18,050 (plus on-roads) for a mid-capacity nakedbike, I’d want to be swooned.

Plonking your arse on the new Street Triple gives more of that familiar feeling. The seat feels plusher and it is, with Triumph saying it did improve padding for this model.

Turn the old-school key – no proximity fobs here – and the updated TFT display arcs up, it’s bright and easy to read in bright sunlight and the ability to adjust the screen’s angle is really handy. 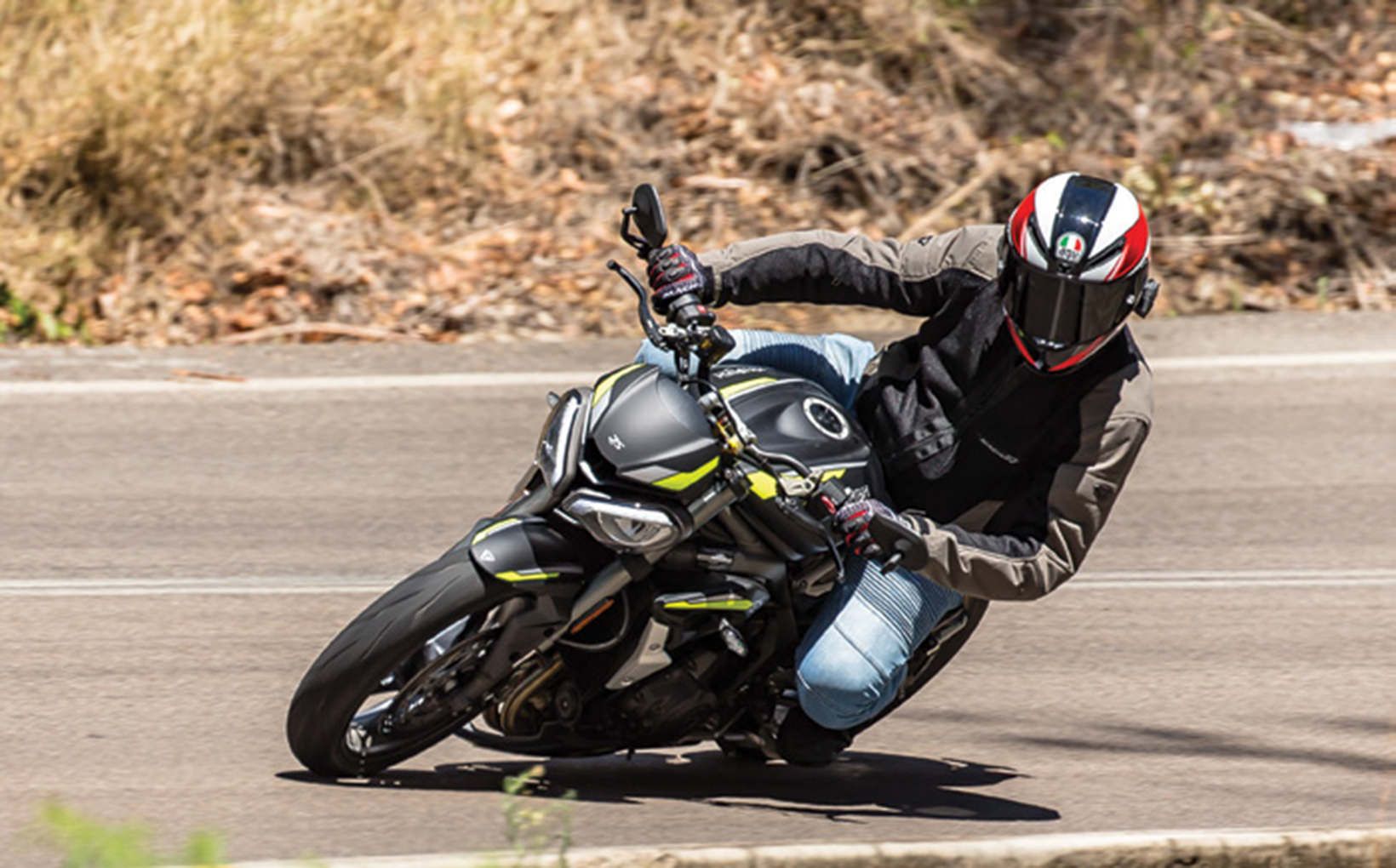 Handling is predictable but ground clearance is a bit tight.

The TFT display has a bunch of customisable display options, you can even pick what colour you want your information displayed in. Ride modes are very easy to navigate and can be changed by selecting the desired setting and getting off the throttle to confirm.

But it’s really not until you start rolling that you get to appreciate the improvements, a nine percent increase in mid-range power and torque might not blow your nightie up on paper, but out on the road and even on the track, the extra neddies make a big and noticeable difference.

My ride began in downtown Maroochydore early on a weekday morning, so we had to deal with some traffic before hitting the open road. The extra midrange punch combined with lower first- and second-gear ratios and Triumph’s clutch assist made navigating traffic a cinch. The mirrors look cool and work well, but hang out in the breeze enough that you do need to be mindful when you’re slicing through traffic.

Into the Sunshine Coast’s Hinterland and up toward Mount Glorious, it is at speed along twisty mountain roads where the RS really excels. The same mid-range improvements that make the RS a versatile traffic-carving device are perfect in a mountain road habitat. The RS will pull out of slow to medium corners with much more enthusiasm than the old model, and there’s less need to dance through the gearbox like a one-legged tap dancer. The only gearbox dancing that remains is all the more pleasurable using the actory-fitted quickshifter, that’s both smooth and precise and its auto-blip function on the downshift rewards you with sexy exhaust noises. 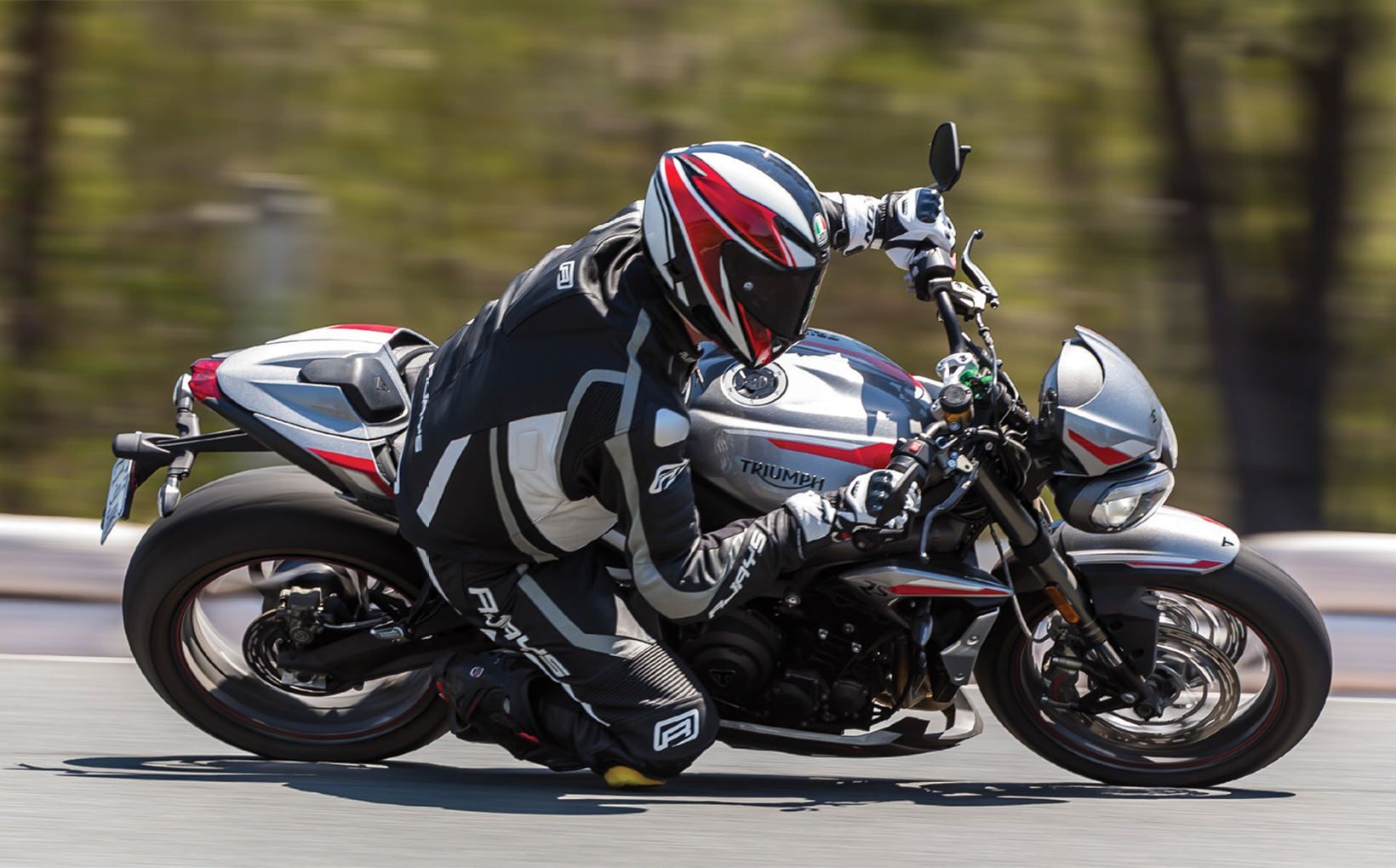 WEIGHT THERE! Triumph reckons the Street Triple is the lightest in its class and, with a claimed dry weight of 166kg, it is. It weighs the same as the old model but with its extra mid-range clout and freer-revving engine it feels more exciting to pedal along on.

Out on the highway, you can get a better gauge of how flexible the 765cc engine now is, too. One hundred kays an hour in sixth has the triple spinning at 4000rpm and feeding on the throttle from here builds speed at an impressive rate of knots. Even dribbling along at 60 in top gear, pulling just 2000rpm, has pleasing results when you wind it on. The new model is certainly stronger in that useful mid-range area. If there’s any criticism – and it’s hardly that – it’s that out on the open road it lacks a little of the excitement of warp-speed capable big-bore machines.

The RS offers five riding modes (Road, Sport, Track, Rain and Custom), and while we didn’t ride wet roads, we did cover some dirt. However, with the predictable way the 765 makes its power, I reckon it’s a case of tech for tech’s sake and having a Rain mode is definitely overkill. Sport mode on the road, and Track mode on the circuit to reduce the severity of the intervening traction control system was all I wanted, or needed.

We’ve all had those moments when we go sailing into a corner, and it starts to tighten

up on you, you’re carrying more speed than is decent and your heart’s in your mouth. You either end up rubbing yourself all over a piece of armco or you manage to wobble through and somehow pull it up.

a bunch of bike journos fight it out for the mountain road win – and it’s in those heart-in-mouth moments when the Streety’s chassis and handling really shines. It’s really intuitive, easy to tip in, easy to go fast on and easy to correct if and when you need to. It holds a line through a corner with stability and poise and is quite simply a pleasure to ride through the twisty bits.

The only time that the RS gets itself into a flap is on severely bumpy corners, but it’s never out of control and a bit of time spent fiddling with the suspenders to suit your particular needs would see it sorted. 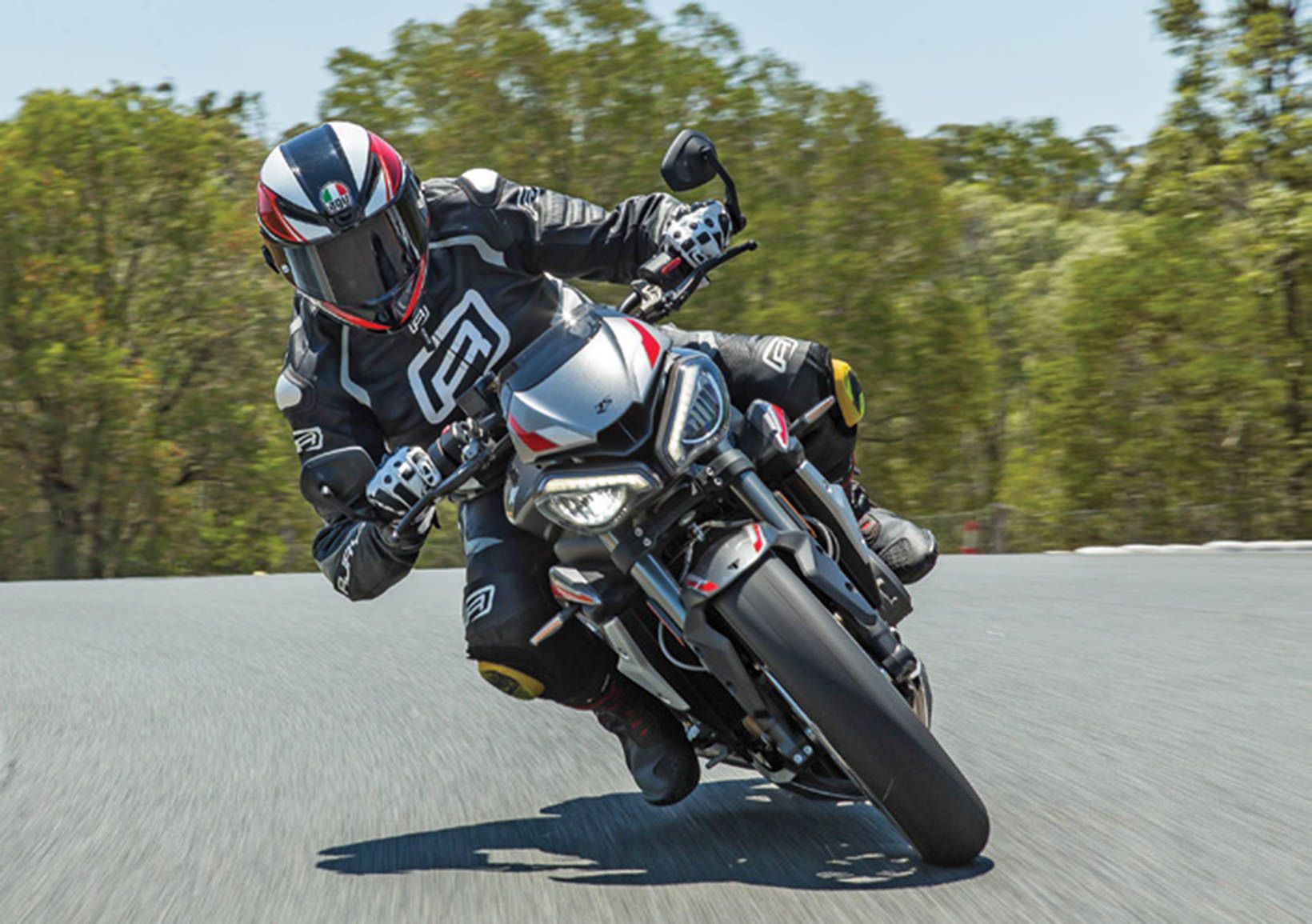 Brisbane's Lakeside track is just the place to test the RS's handling.

The front brake performance is phenomenal, and so it should be with Brembo’s meaty M50 Monobloc calipers bolted on. But fine braking performance is more than having huge stopping power, and there’s a few muscle-bound missiles out there that are a bit too touchy when you apply the front picks. Not so the RS. It’s got the power, yes, but the feel and bite are spot-on, and there’s no grabbiness. The rear brake could use a little more feel as it’s a bit vague when your using it for slow-speed work, and you might find it would bed in to have more feel over time.

The claims by Triumph that the seat has been improved is not PR-hype. We covered a whisker over 350km on the first day and it was only at the very end that the seat started giving me grief. Ergonomically, comfort is excellent for my 186cm frame, I didn’t get stiff, no aching shoulders, nothing. If you’re planning on doing some miles, the optional screen makes a big positive difference to the wind buffeting effect, too.

We had the chance to push the RS toward its limits at Lakeside Park Raceway in temperatures approaching 40ºC and the engine improvements are exactly that in a track situation. The extra mid-range allows you to punch out of corners without carrying peaky, highside-esque revs through and out of corners. The quickshifter is faultless and, even in this environment, the brakes are the duck’s guts. 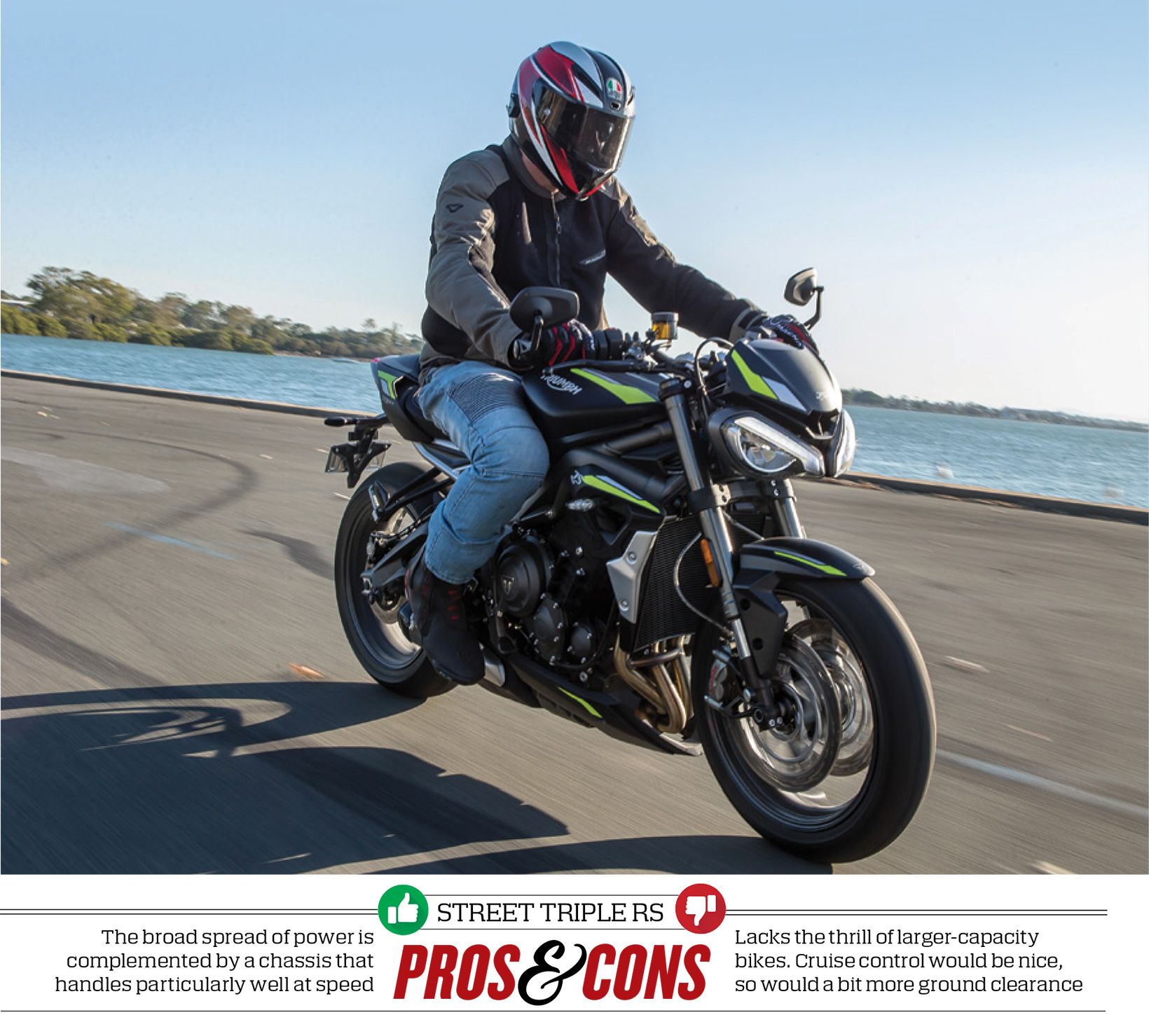 There has been some criticism of the outgoing model having ground clearance issues and, sadly, the new model suffers the same affliction. But it says more about how capable the thing is than what it does badly.

On the road, which is exactly where it has been designed to be, it’s a non-issue. It’s not until you take this roadbike to the racetrack and take it out of its designated design brief, that it’s noticeable. After a particularly, er, memorable moment when the footpeg dug into the tarmac rather savagely heading through Lakeside’s Karrussell corner, I adjusted the suspension to suit the higher speeds and my 105kg weight. It improved the situation considerably, but the hero knobs still touch down fairly regularly.

According to Triumph the new TTX Öhlins rear shock runs a fair whack cooler for more consistent performance, and with the track temperature being what it was combined with the amount of sessions I rattled off, you’d have to give its fade-free performance the thumbs up.