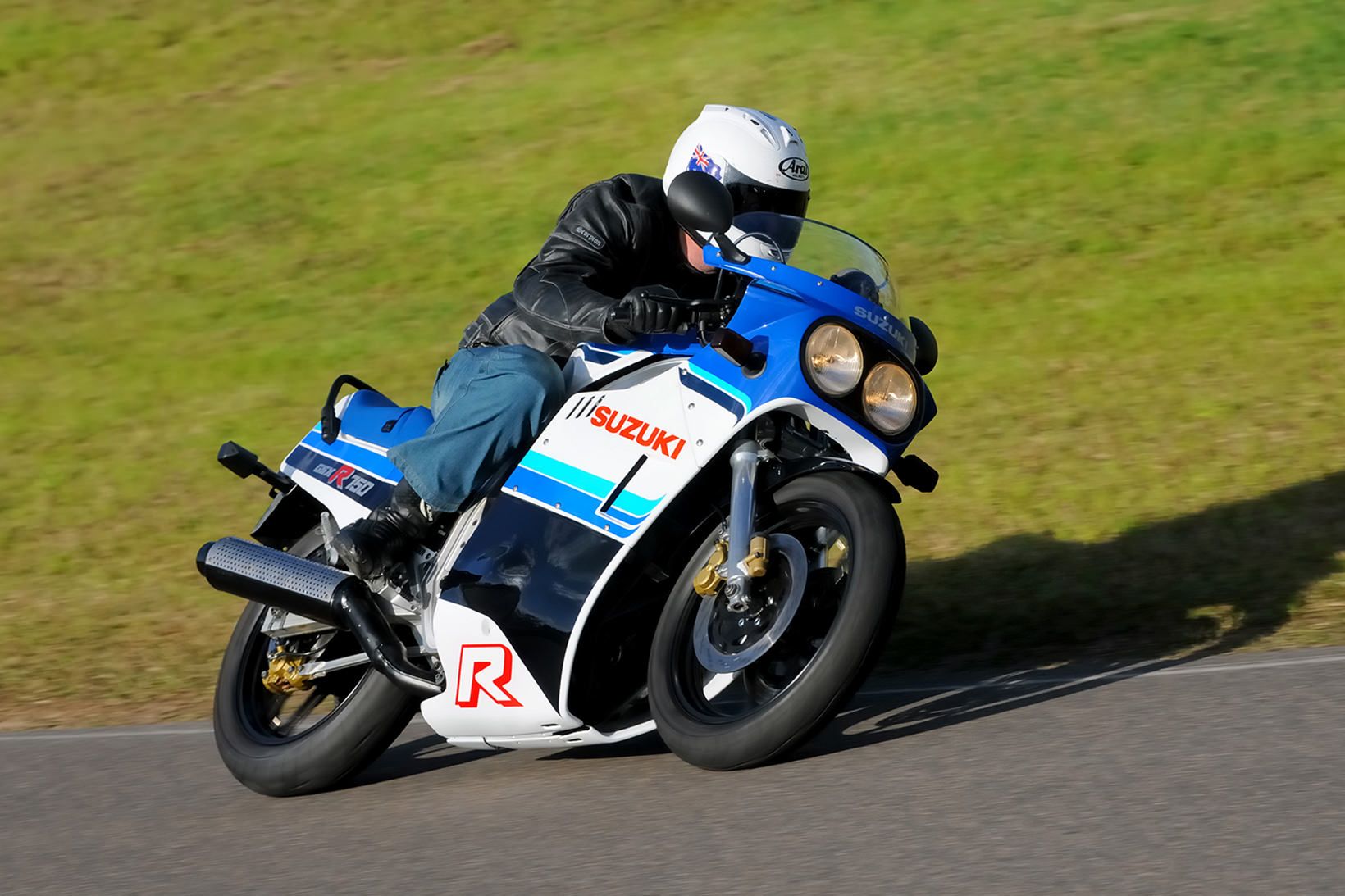 I’ve been restoring this actual bike for three-years and I’ve spent around three grand on parts and hundreds of hours in the shed. The bike has not turned a wheel for 20-years and aside from running through the gears on a race-stand, I have not tested it at all. To say I am nervously excited is an understatement – I’m as nervous as I was when I rode the priceless ex-John Kocinski Cagiva 500! 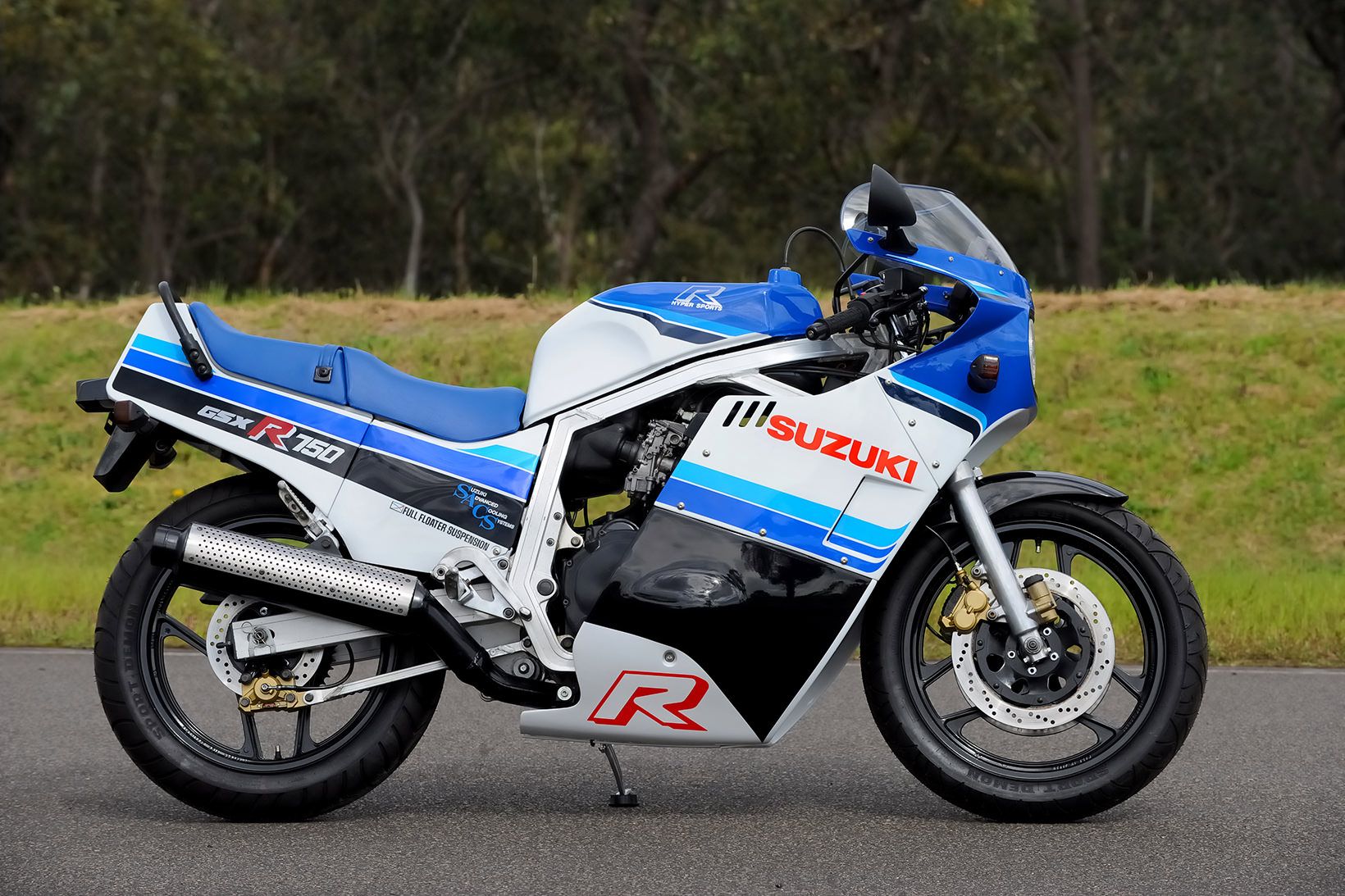 I’m very familiar with the current 750 and have spent a lot of miles scratching on them. I also owned a 2011 model 750 for a while. I have no huge expectations of the original bike but I do have plenty to compare it to as I recently rode most four-strokes from the same era and I also owned a 1985 FZ750 Yamaha, the main competition for the Suzuki back in the day. Just ask Wayne Rainey or Kevin Schwantz!

I walk around my pride and joy and do a safety check. I try and put myself back 35-years, imagining what was going through the journalists minds as they prepared to ride the bike for the first time at the World Launch, held at Suzuki’s testing ground at Ryoyo. They must have been buzzing. 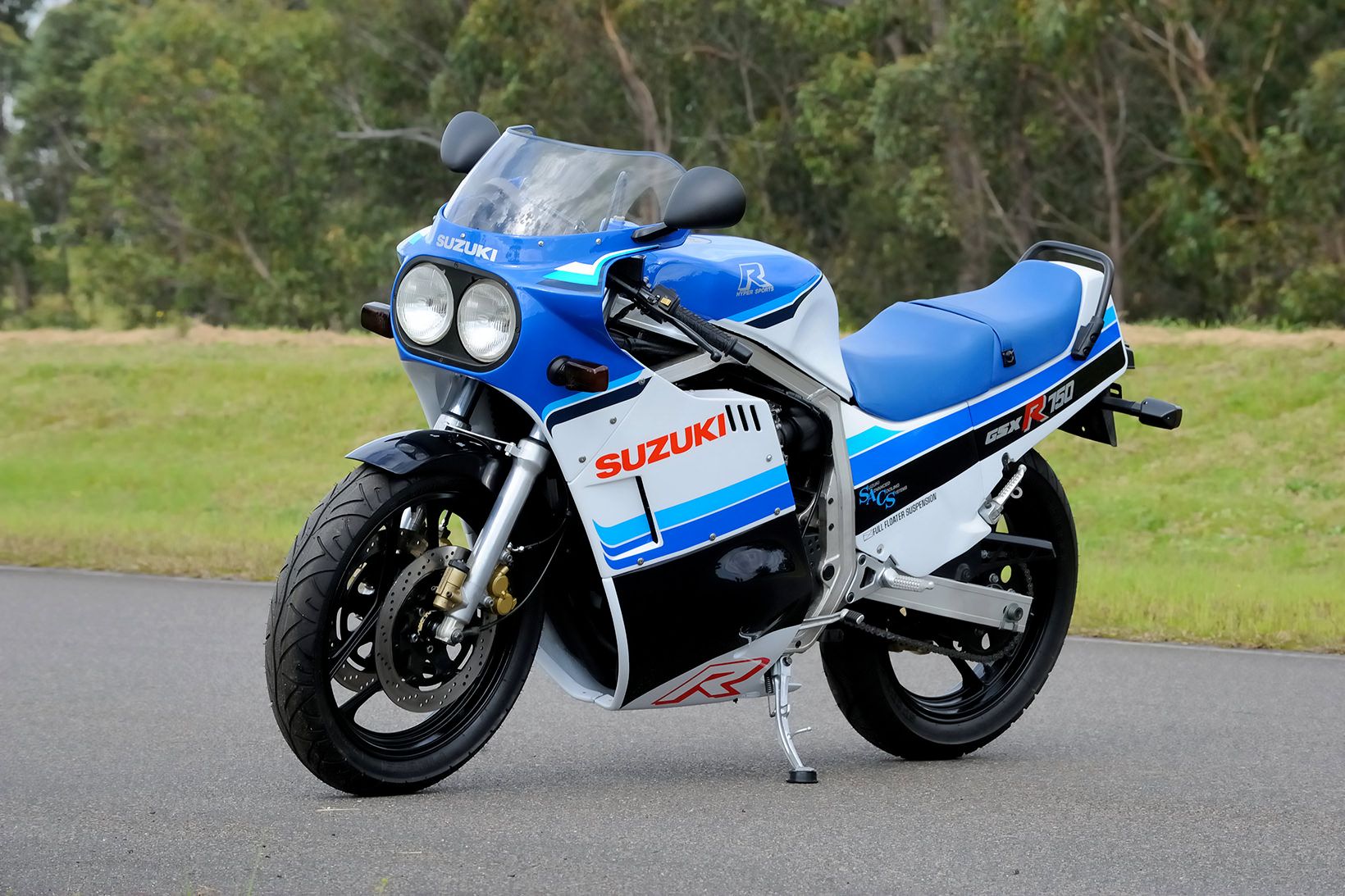 Old school fast corner speed is the way to ride the 750F.

I drool some more at the stunning racer replica looks and hop on the bike. The old school feel of the bike is brilliant. The huge screen sits tall and is so wide it is crazy. It must be three to four times the size of the modern version, which means it would be fantastic on the road. The way it curves around makes the bike feel racy. The tall and very narrow gas tank with endurance aircraft-style gas cap and vent is right under my chest, with a trick endurance style ventilation hose between my forearms, making me feel like Kevin Schwantz. 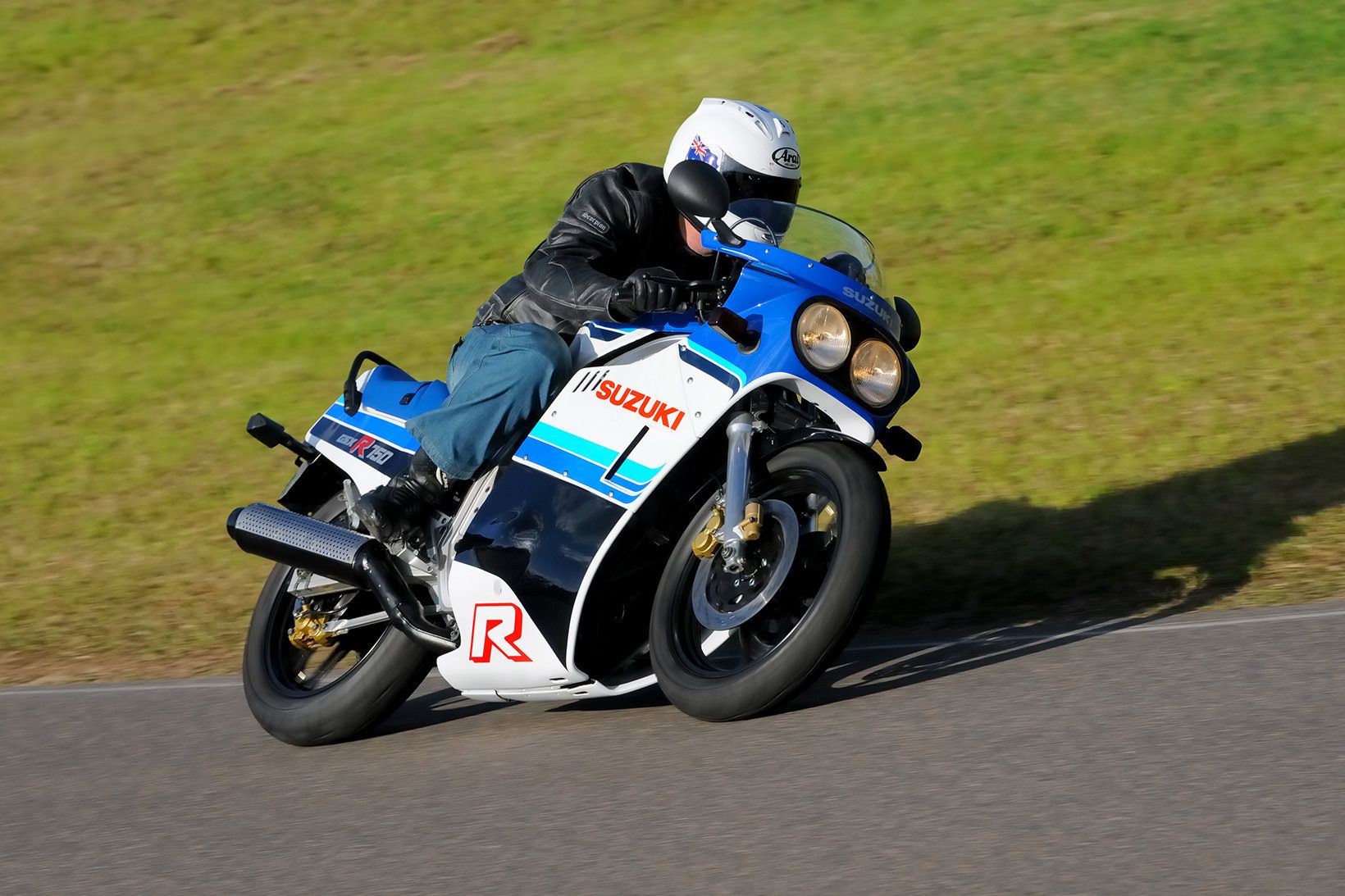 Jeff was both nervous and overhwhelmed with happiness when he rode his Slabbie for the first time.

The ‘bars are really wide apart. I love the way the top triple-clamp sits tall above the traditional clip-ons. A real race feel from the 1980s. My back is arched and I’m almost in a race tuck. I’m sitting well inside the bike, not on the bike. The seat is plush and so low. The aluminum folding footpegs are hideously high and cramped feeling, while overall the bike is extremely narrow between the knees for an inline four, due to the main frame rails going over the top of the engine rather than around it like a modern frame does. 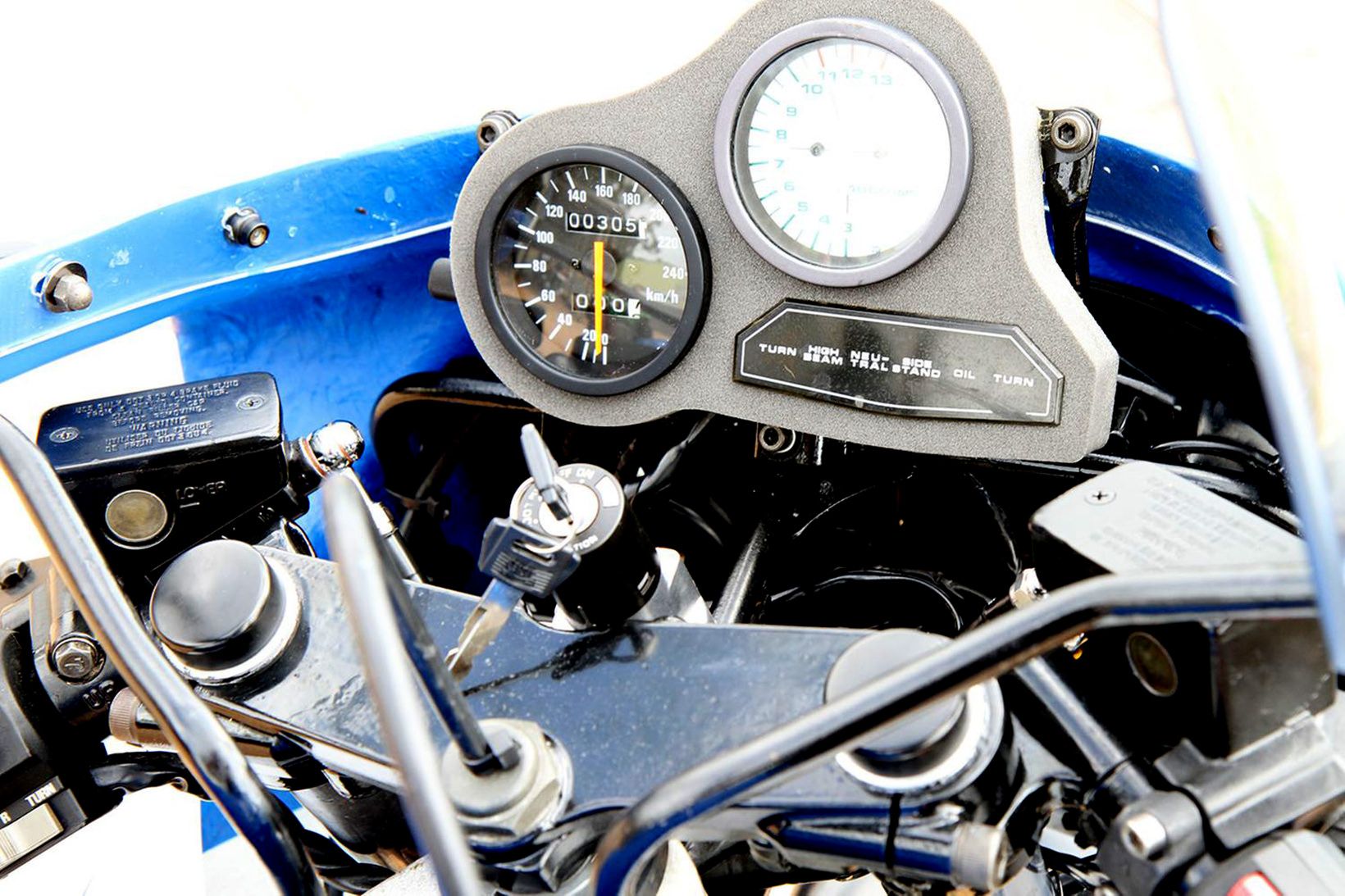 The dash looks so basic but even for today it looks ready to race and has only the basics for performance. I love the foam-mounted clocks – that is pure 1980s and 1990s Grand Prix style. The other trick thing is the tacho doesn’t start counting until 3000rpm, a subtle sign of the intentions of the GSX-R750…

The first thing I notice when I turn the key is… nothing! There is no fuel pump noise, there are no servomotors setting up, the dash doesn’t go through a series of crazy menus. Nothing happens aside from the neutral light showing. It’s amazing. 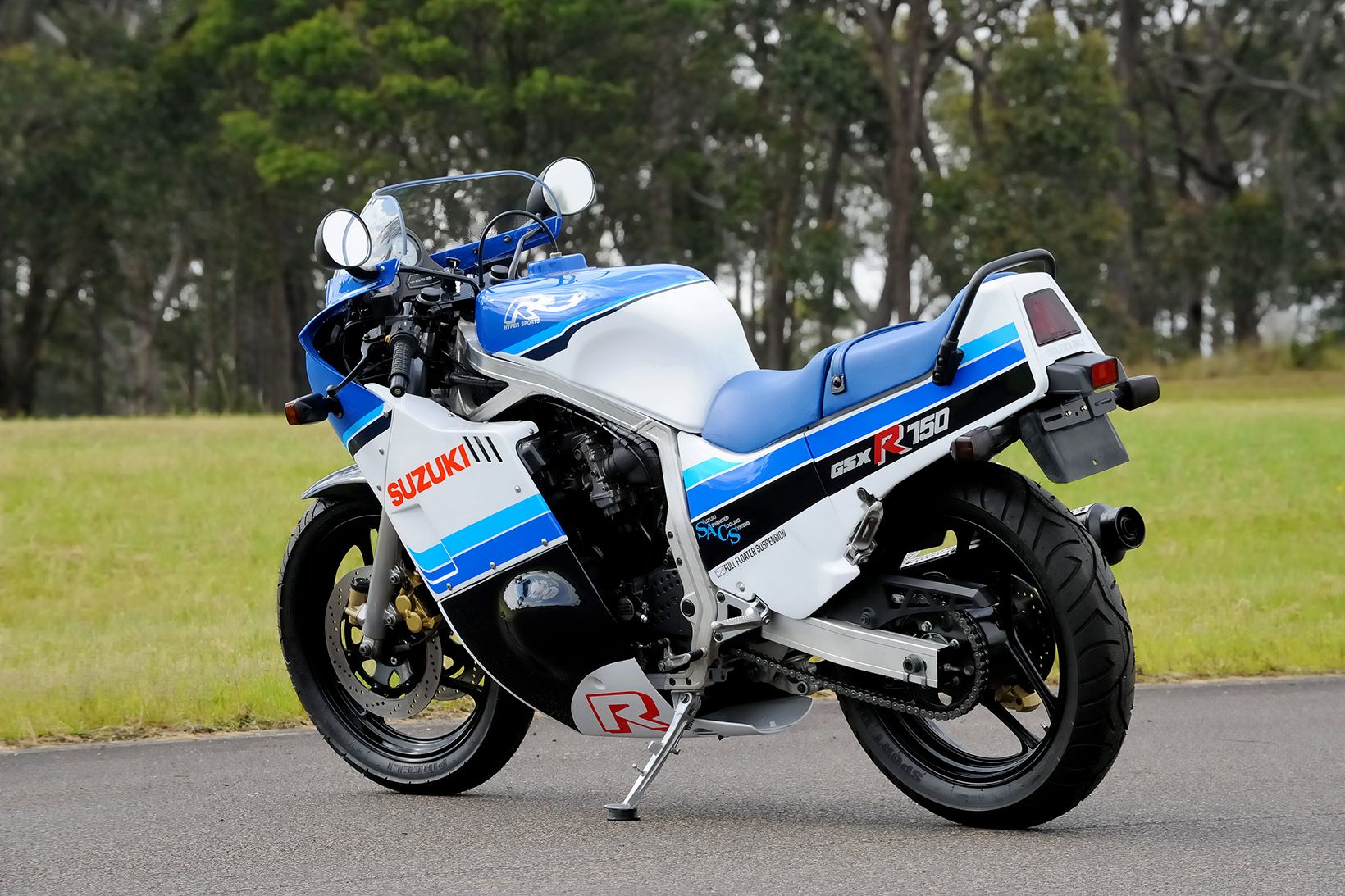 I turn the fuel tap on, pull out the choke and hit the starter button. The bike cranks hard a few times and after some spluttering and clunking it fires into life and rumbles away at a high idle, the smell of rich unburned fuel sticking to my leathers as it warms up on the choke. Warming up seems to take forever, well it does, about five-minutes before a clean idle, not like these days when bikes idle instantly and off you go up the street before waking the neighborhood… 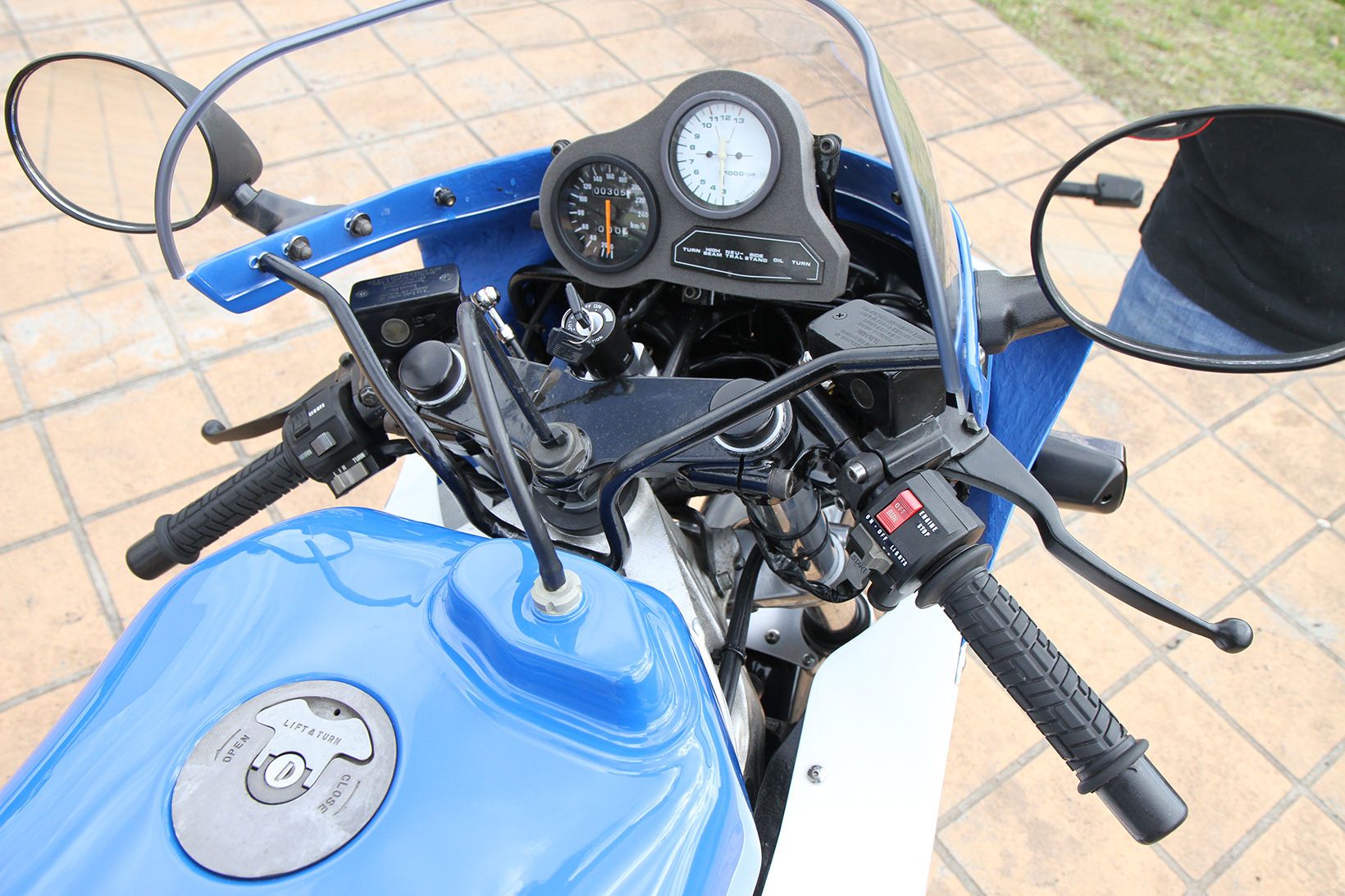 I get it off the choke and give it some good throat clearing revs. The heavy throttle and instant response a reminder that the bike has mechanical flat slides with accelerator pumps as standard. Amazing stuff… 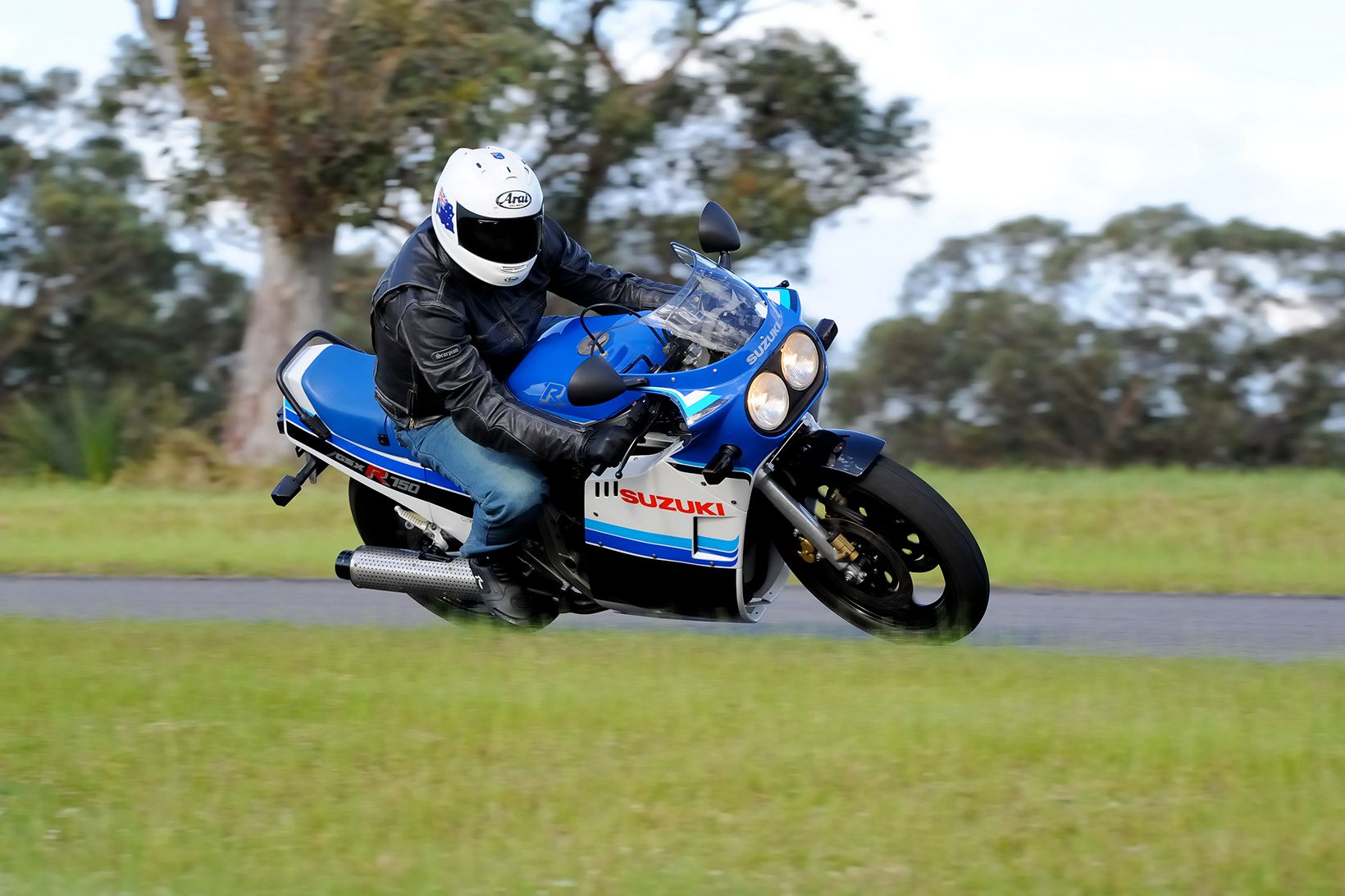 I pull in the light feeling hydraulic clutch lever and select first gear, and then head out for my first ever ride. It’s a moment I won’t forget in a hurry – it is everything and more that I imagined it would be and I feel an incredible sense of achievement as I cruise out on a warm-up lap. 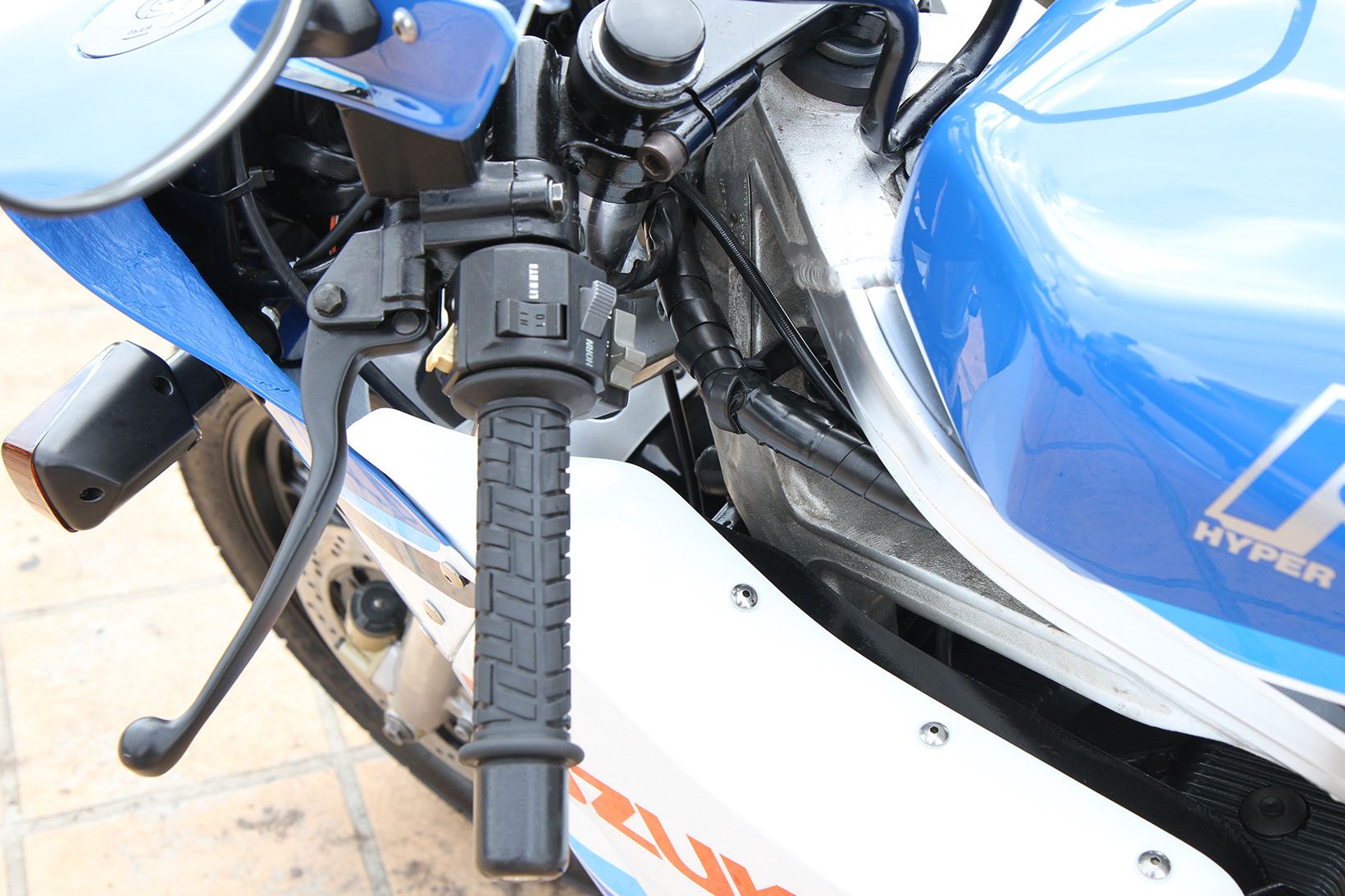 The hydraulic clutch is light, the bars wide and low.

After a few laps to scrub the tyres, bed brakes, make sure there are no fuel or oil leaks, etc, I do a proper test and ride the bike as fast as I can, just the way it was meant to be ridden in 1985!

The immediate thing I notice is just how gloriously smooth the engine is. Suzuki nailed it from right back then and it is silky smooth with a fabulous gearbox that puts a lot of modern gearboxes to shame, with a short, sharp and positive shift and minimal lever travel just like a well set-up racer. Upshifts and downshifts are slick and the ratios are close, adding to the excitement of the ride. I can really feel why these bikes were so amazing for their time and the World’s top bike journo’s must have been absolutely blown away when they rode this machine for the first time. 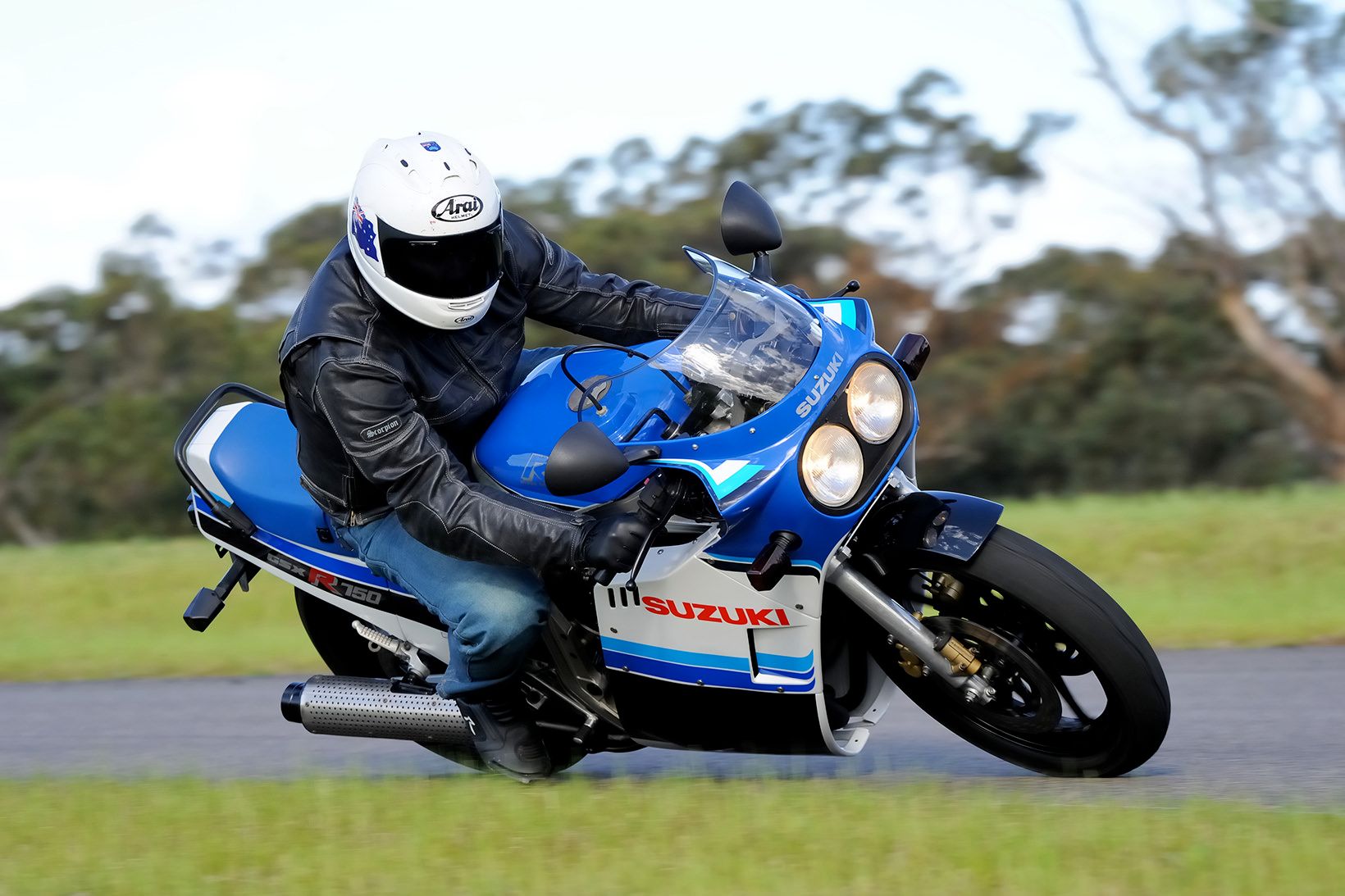 Lap two and a bit more lean angle and the smile in the helmet has grown twice as wide.

The carburetion, although touchy thanks to the flatslides, is pretty good on my re-jetted bike and the engine loves to rev hard, so I’m winding the throttle right to the stopper as the Gixer screams to 10,500rpm where it makes peak horsepower. Peak torque is also high in the rev range at 8000rpm, making early throttle opening very easy and the bike tractable, just like the modern version.

The howl from the standard exhaust system is invigorating and the bike has the same spine-tingling sound as a new 750, without the induction roar… 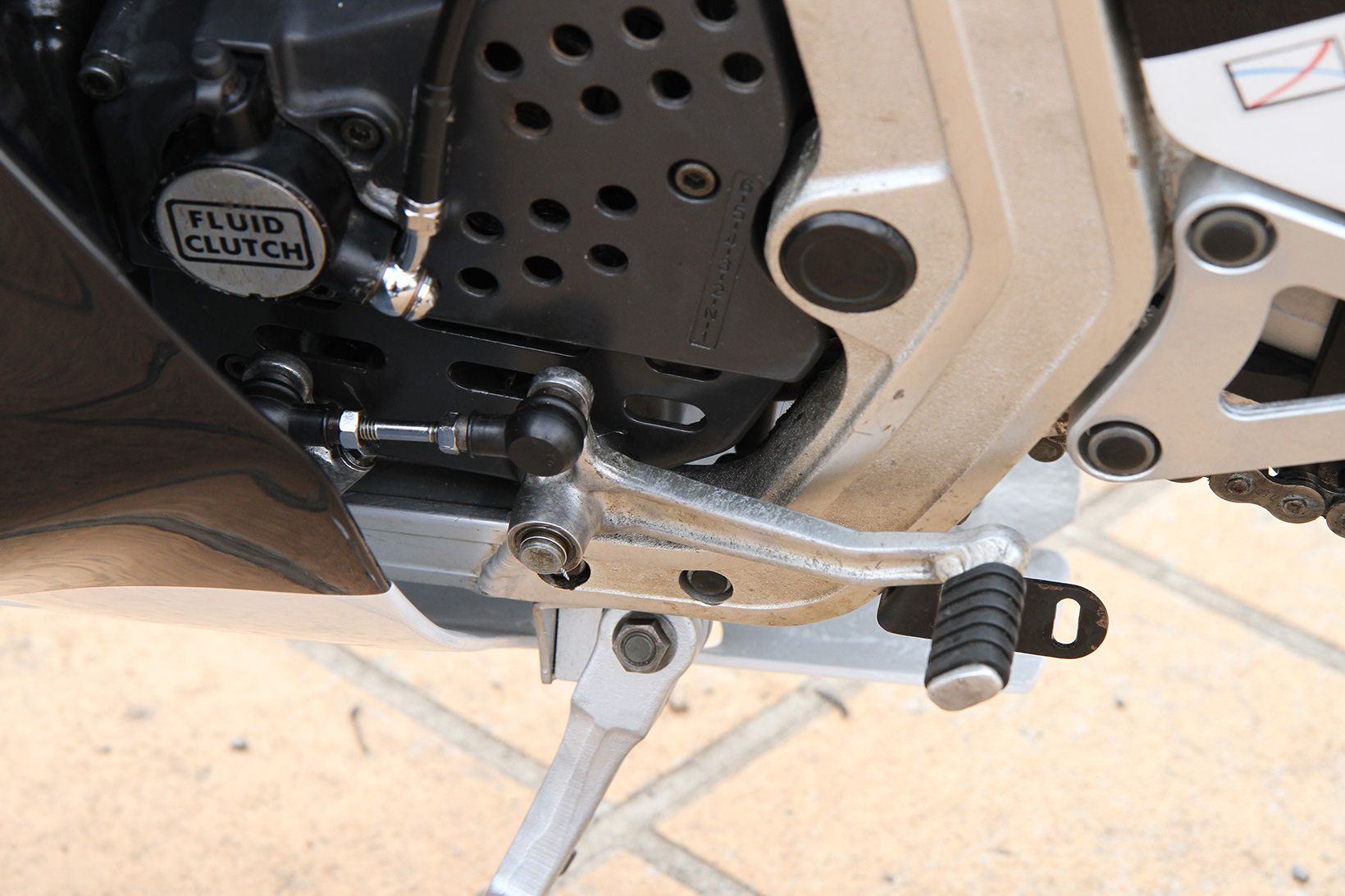 I have to admit I’ve fitted modern springs and emulators fitted to the forks, while the shock is a modified R6 shock, so the suspension is brilliant! Braking also – I’m also cheating, with Venhill brake lines and SBS brake pads there is some improvement there over stock brakes. 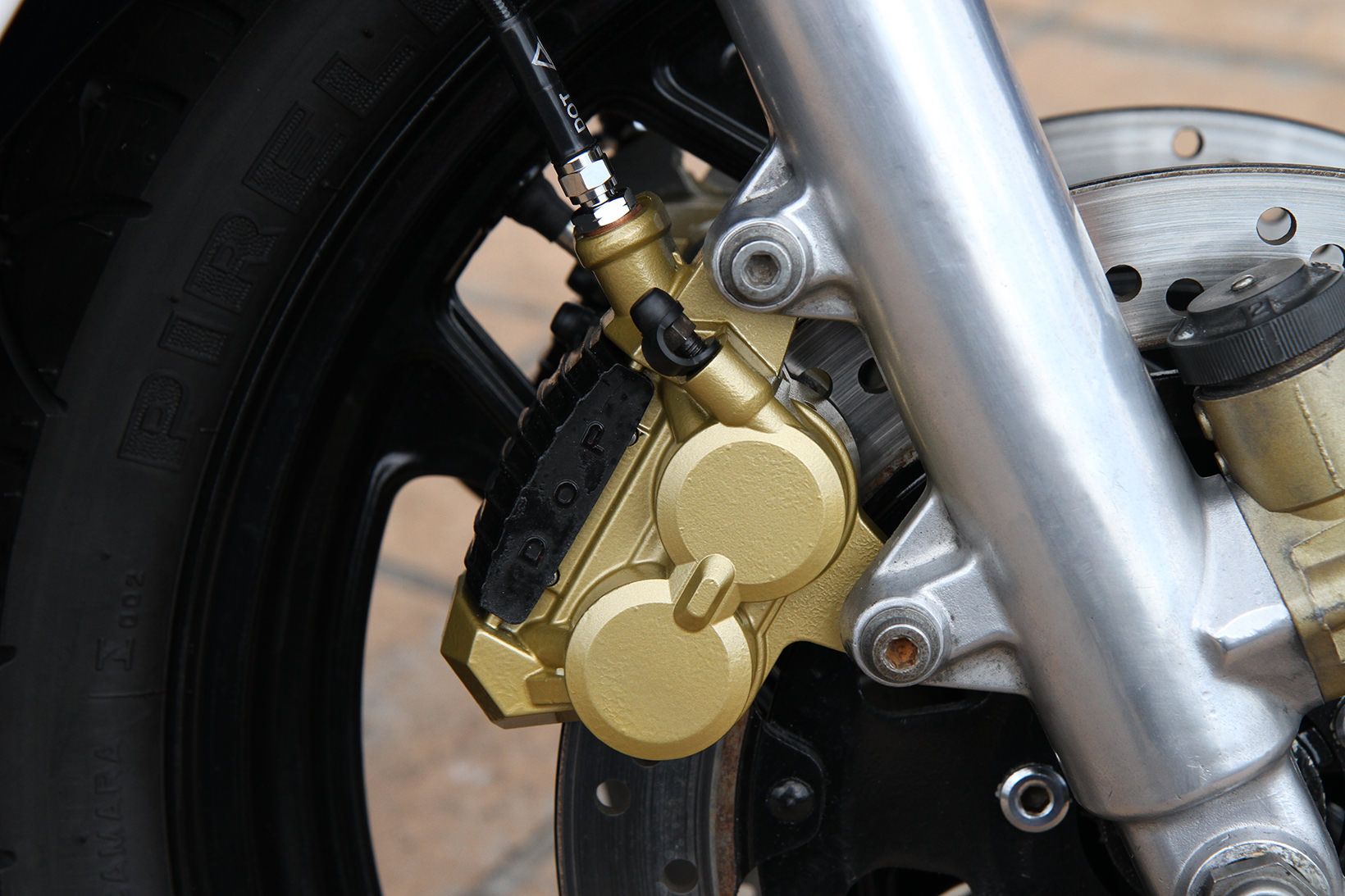 Cornering has to be done old school style, with lots of braking a little earlier then fast sweeping lines through the turns. With the narrow tires (Pirelli Sport Demons) providing sensational cornering speed and the lightweight narrow rims helping with corner speed the steering is faster than I thought it would be for big 18in wheels.

However, in terms of being maneuverable or raceable, the new 750 would run rings around the ‘one-line’ GSX-R750F. I found tucking in low and not hanging off too much felt the most comfortable.

Overall, mind blowing for a 35-year-old bike but it needs to be ridden with finesse and patience whereas the new bike can be ridden in anger. 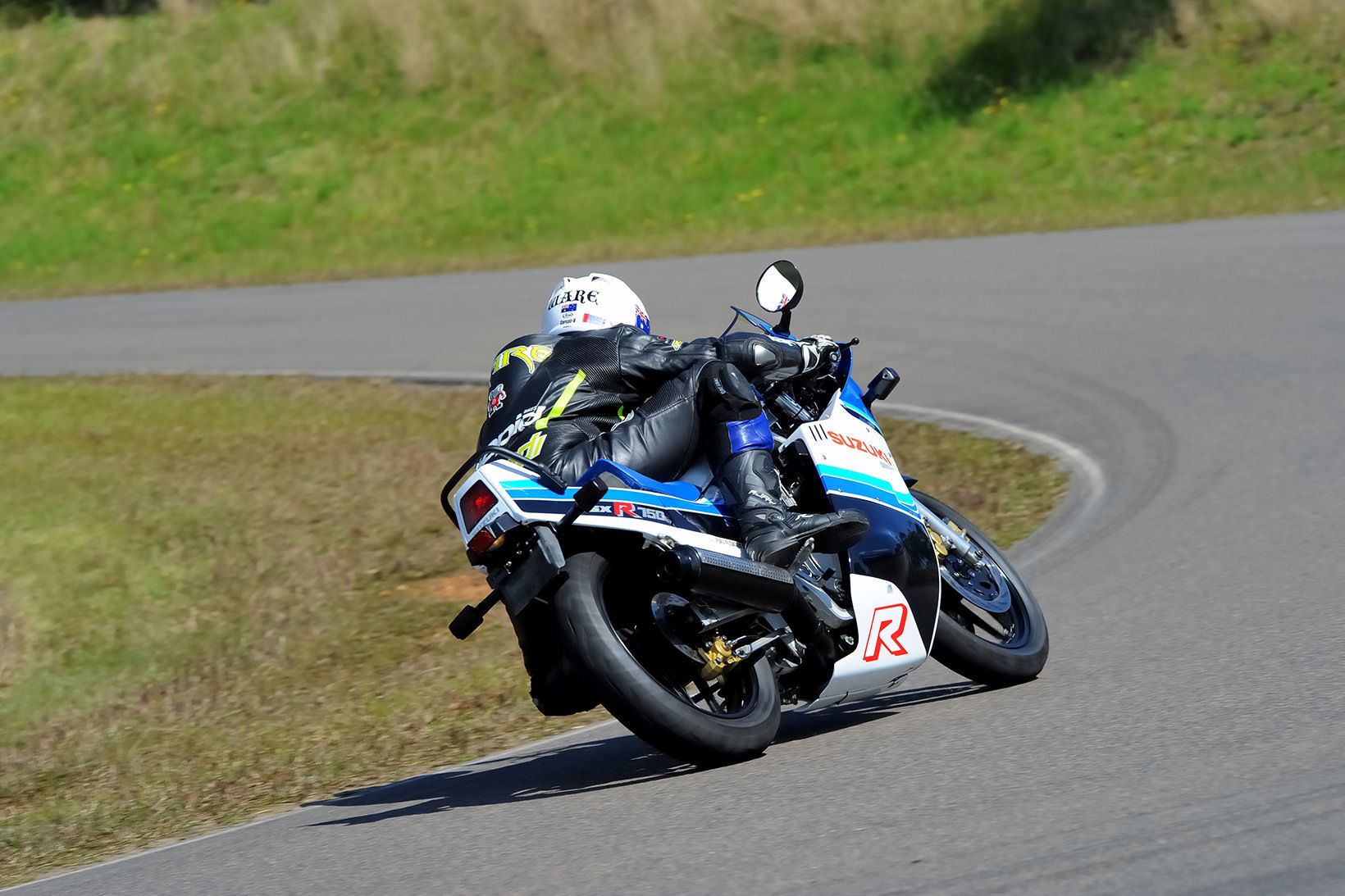 It didn't take Jeff long to swap jeans for leathers and ride it like a typical A Grader would!

Out on the street, my 1985 GSX-R is an incredibly good roadbike aside from the cramped footpeg position.

Amazingly, it runs at a good temperature all of the time – Yokouchi-San did an amazing job with the oil cooling.

Incidentally, I read that he thanks his grandmother for teaching him to stir the bathwater. He was lazy and the old bath with a fire underneath it had to have the water circulated to avoid hot spots.

He applied this principle to keeping the oil flowing around the combustion chamber of the GSX-R750F to keep that cool. What a story… 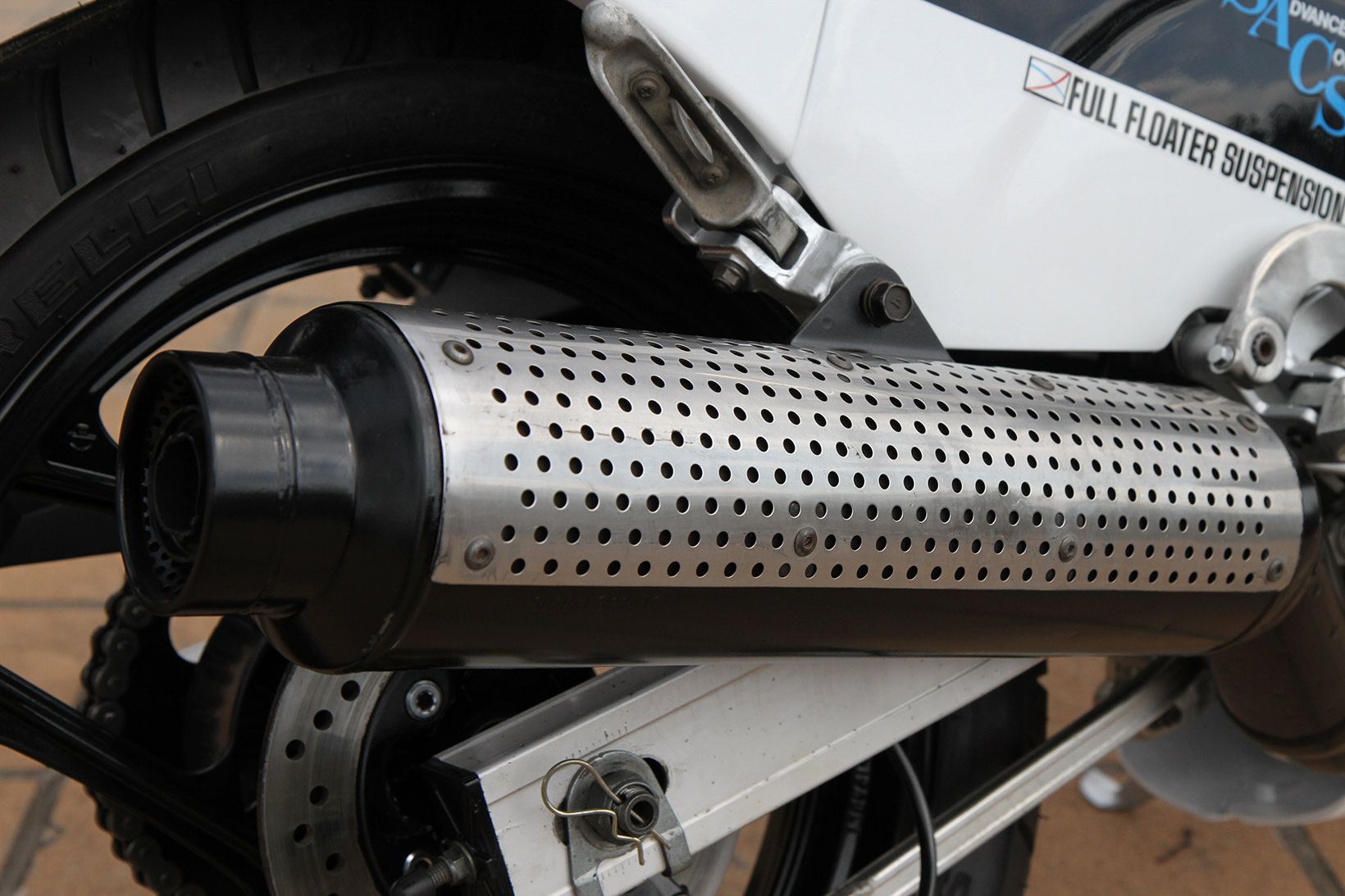