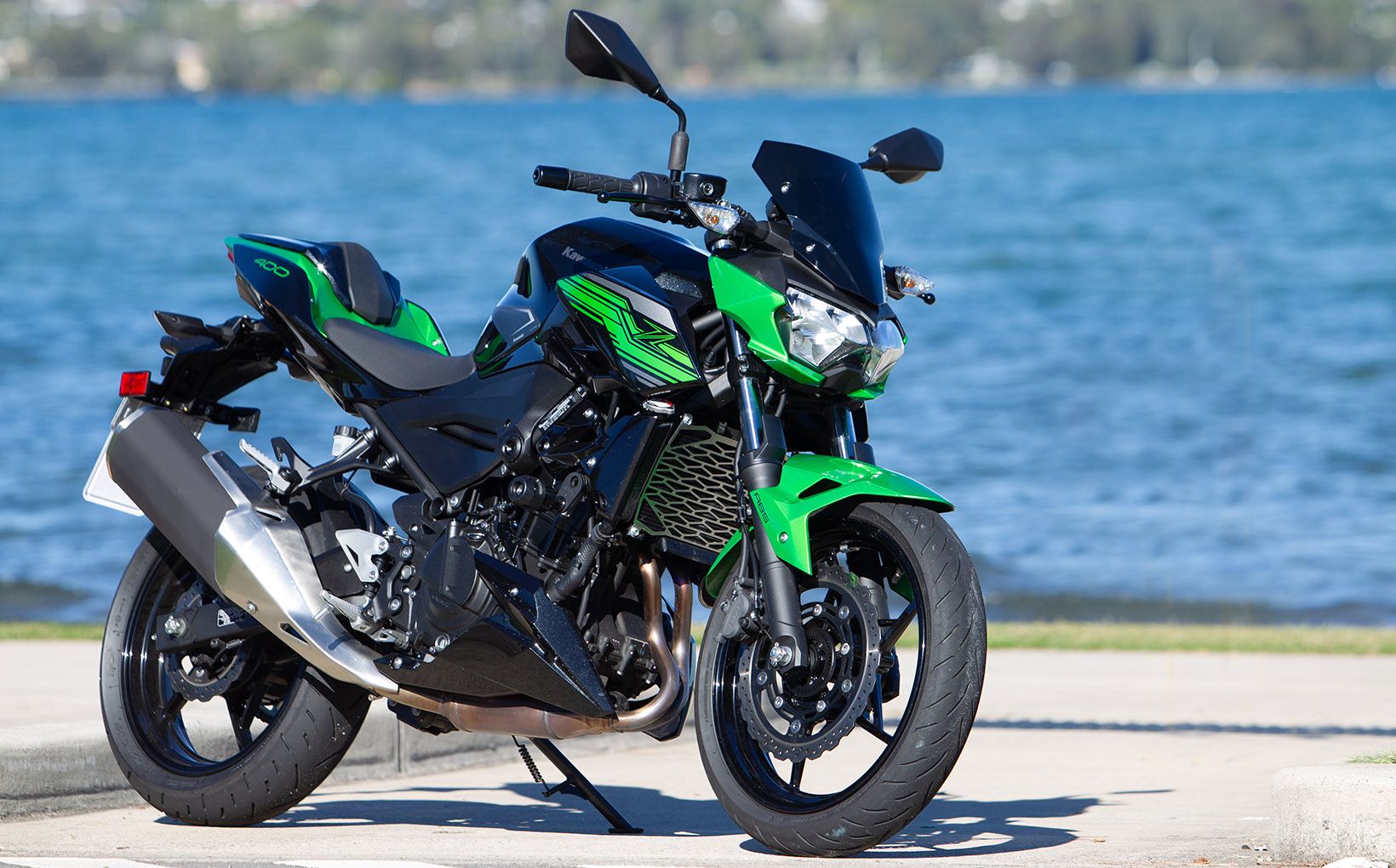 Is there anything worse than parking your bike then discovering a cop has just boxed you into the spot with his patrol car and has that look on his face every P-plater hates to see?

I had parked the bike so it could be photographed for this Australian Road Rider test, but first I would be “blowing in the bag” (as my old man calls it, no idea why a plastic box is called a bag) and getting my licence checked – again.

I’m legal though, so once he’s done that I discover the real reason he pulled over.

“I just got the same bike a week ago, how do you like it so far?”

I breathe a sigh of relief. We start to chat about the bike, he bought one to get to and from work because of its low cost, easy parking and just for a fun way to get to work.

So that’s the two target audiences for the new Z400 – learners of any age (me) and commuters (him). It’s an excellent choice for people in either group. 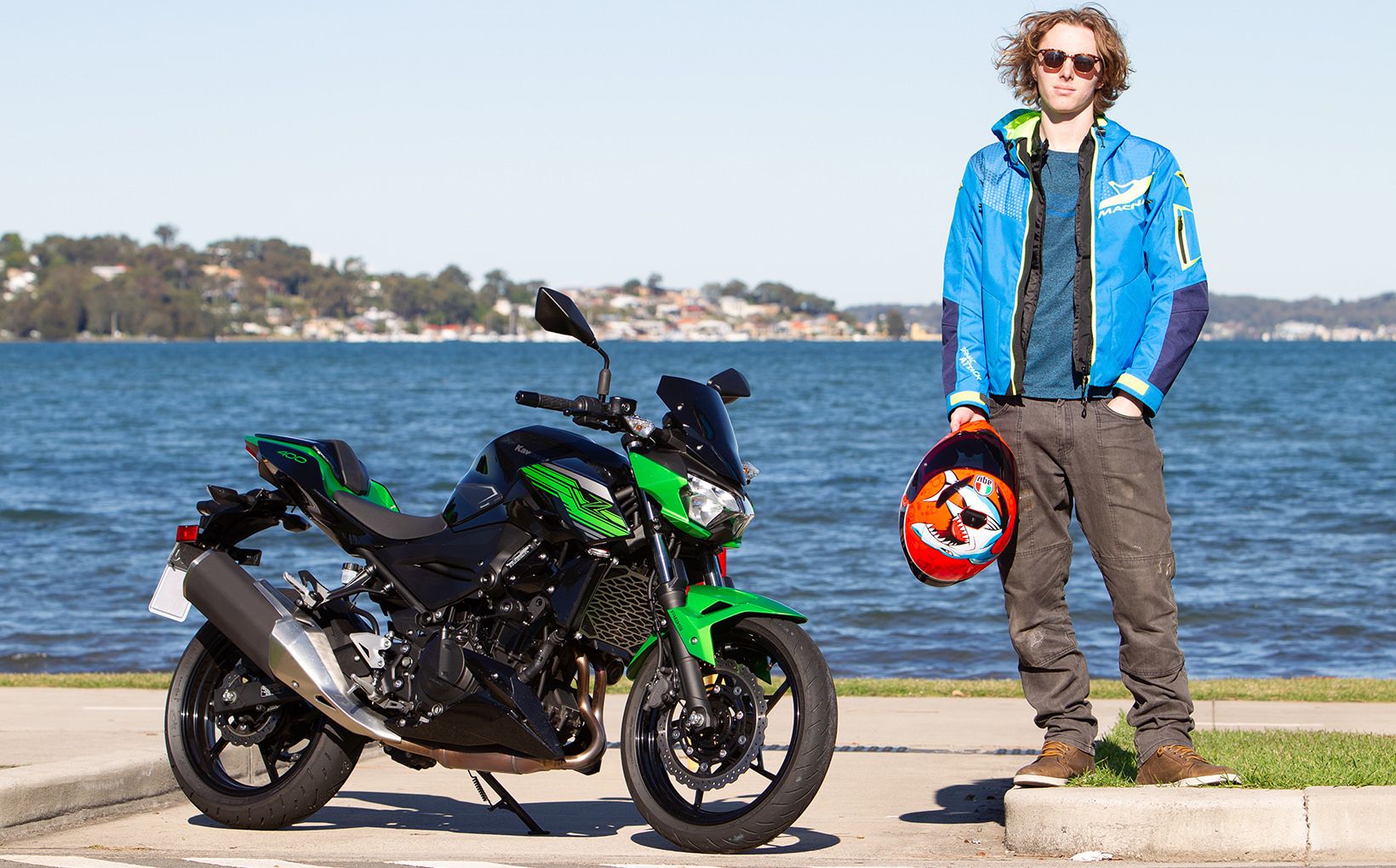 Essentially what you’re getting with the Z400 is a Ninja 400 without the bodywork. All the major bits – engine, frame, wheels, brakes, suspension… all the same as the Ninja.

Of course there are a few other changes like different handlebars and mirrors, but there are a lot more similarities than differences.

One difference everyone will like is the $450 saving over the Ninja 400 – priced at $6299, it’s good value and a lot cheaper than some of the more fancied and larger capacity LAMS bikes like the Versys 650L, Yamaha MT-07 and Suzuki SV650.

Those bikes, and my FZ-6R, produce more bottom-end power than smaller twins like the Z400, but it makes up for it with less weight.

Coming from a 192kg bike to a 167kg doesn’t sound like much but the Z400 was so easy to lean into the corners compared to the FZ it really took some getting used to for me.

“The Z400 steers quite quickly, much quicker than your FZ, which is hitting your confidence.” 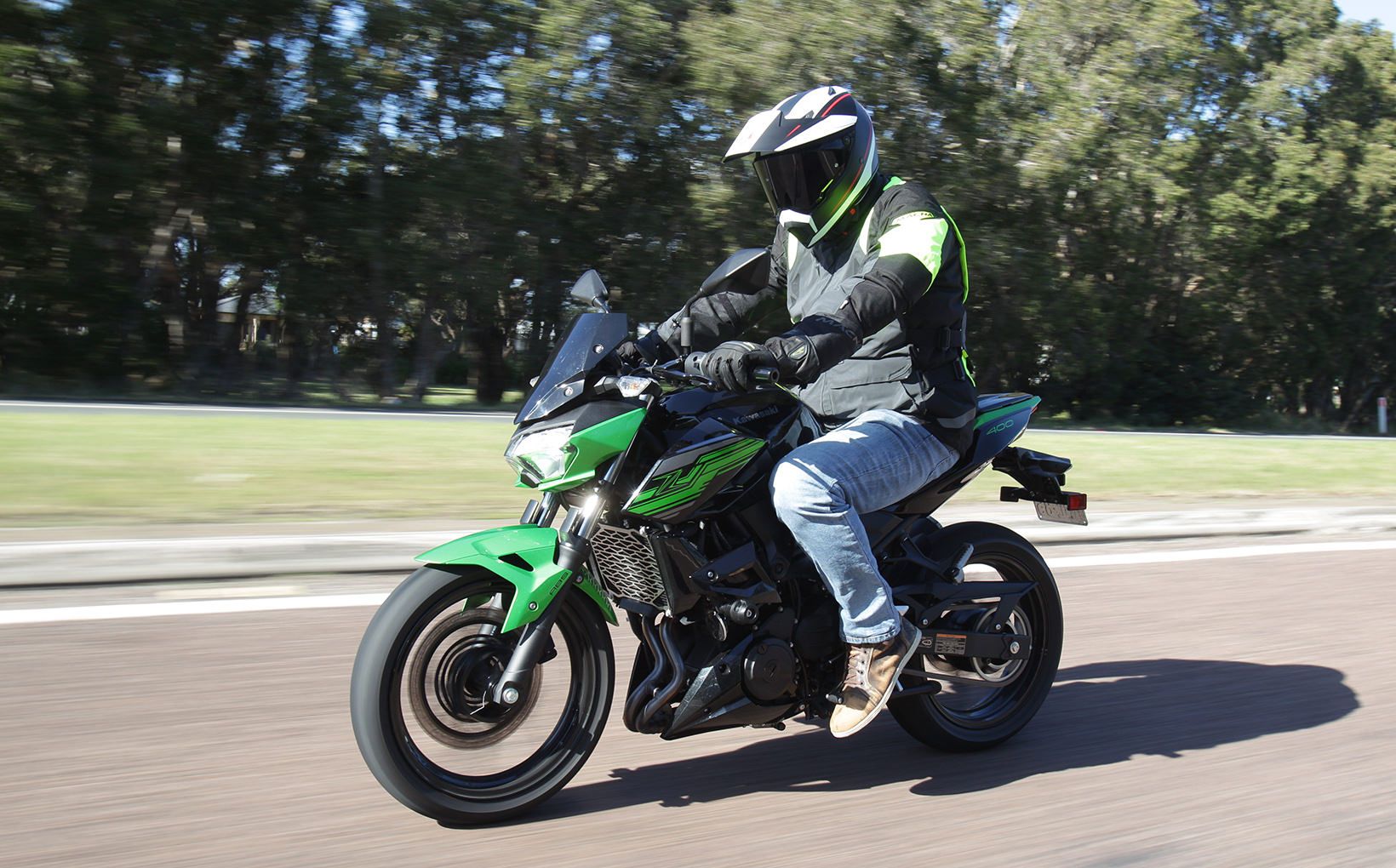 The matt black and lime green colours look great – some might say fairly standard Kawasaki, but I think the Z400 looks great.

The Z400 is a compact bike – Kawasaki claim the engine is about the size you’d expect a 300cc twin to be, the trellis steel frame is designed to be slim and overall it’s 3kg lighter than the old Z300. 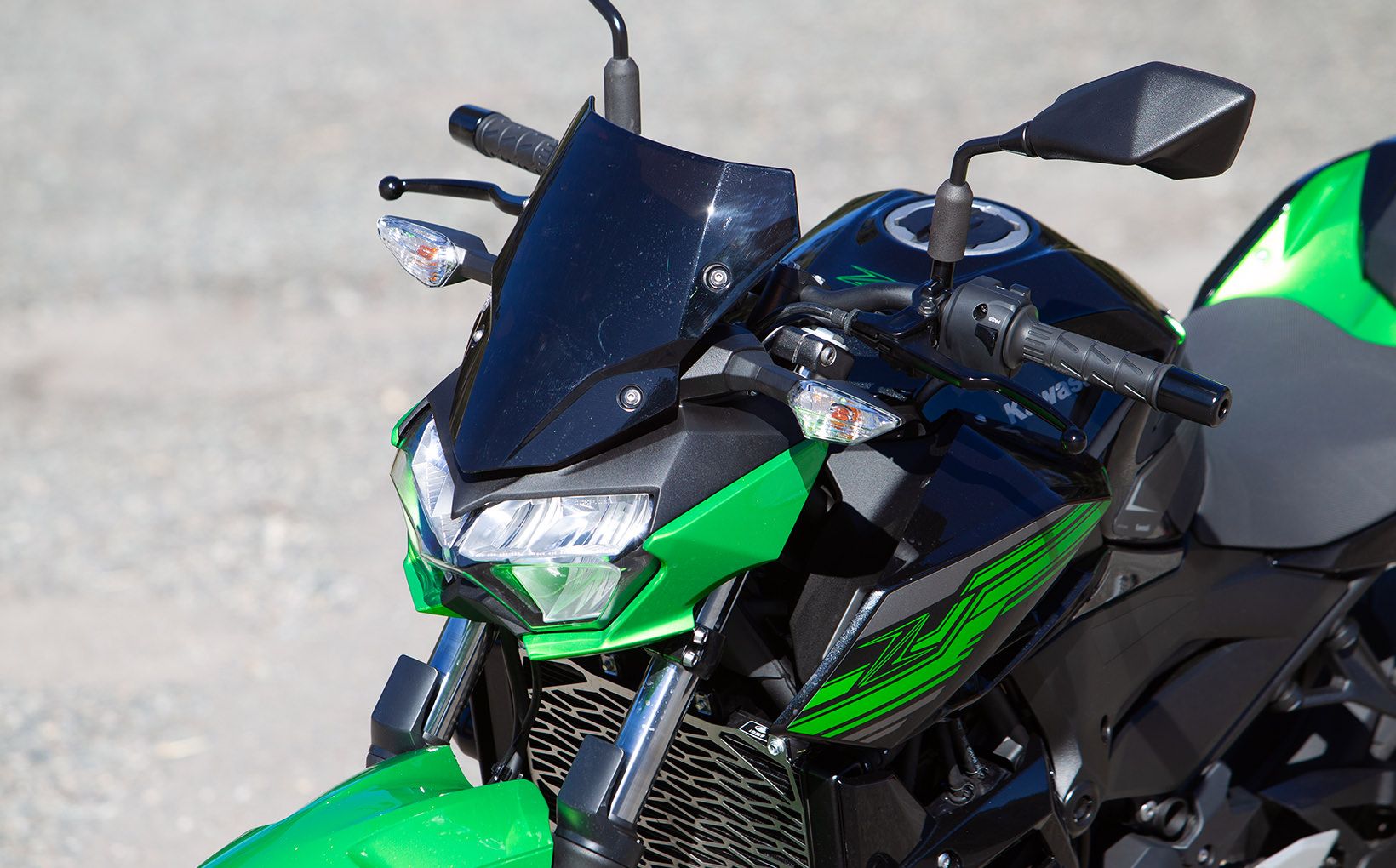 Kawasaki had fitted the optional instrument cover (a taller screen) to the test bike.

The seat height is moderate at 785mm, but the seat is narrow at the front, so it’s easier for short-legged people to get their feet on the ground.

I don’t have that problem, I’m tall, and found the footpeg to seat distance to be a little cramped during long rides. The seat padding is a bit thin for long rides too, but the same can be said for nearly every bike in the class. 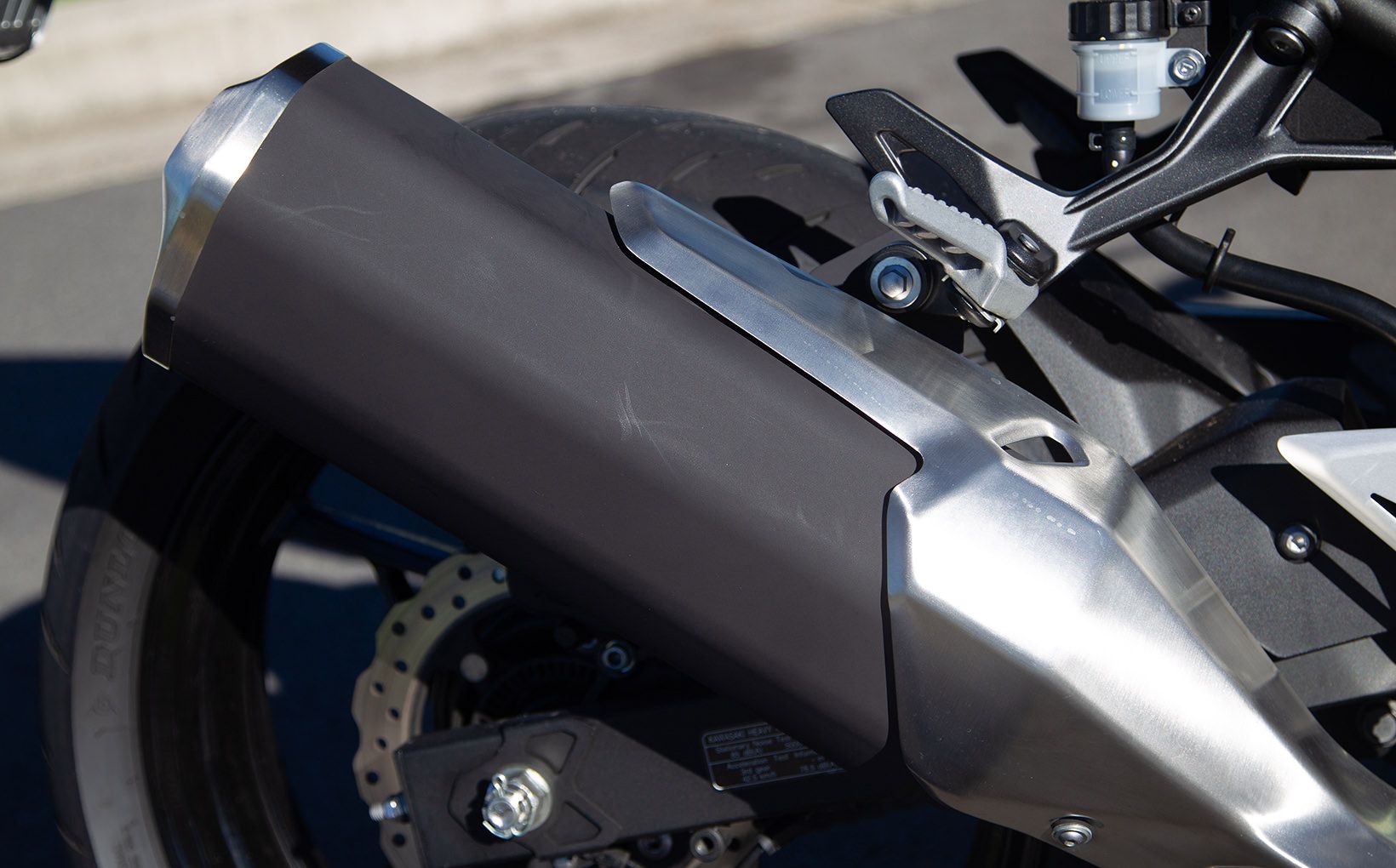 The standard exhaust is bulky and very, very quiet. 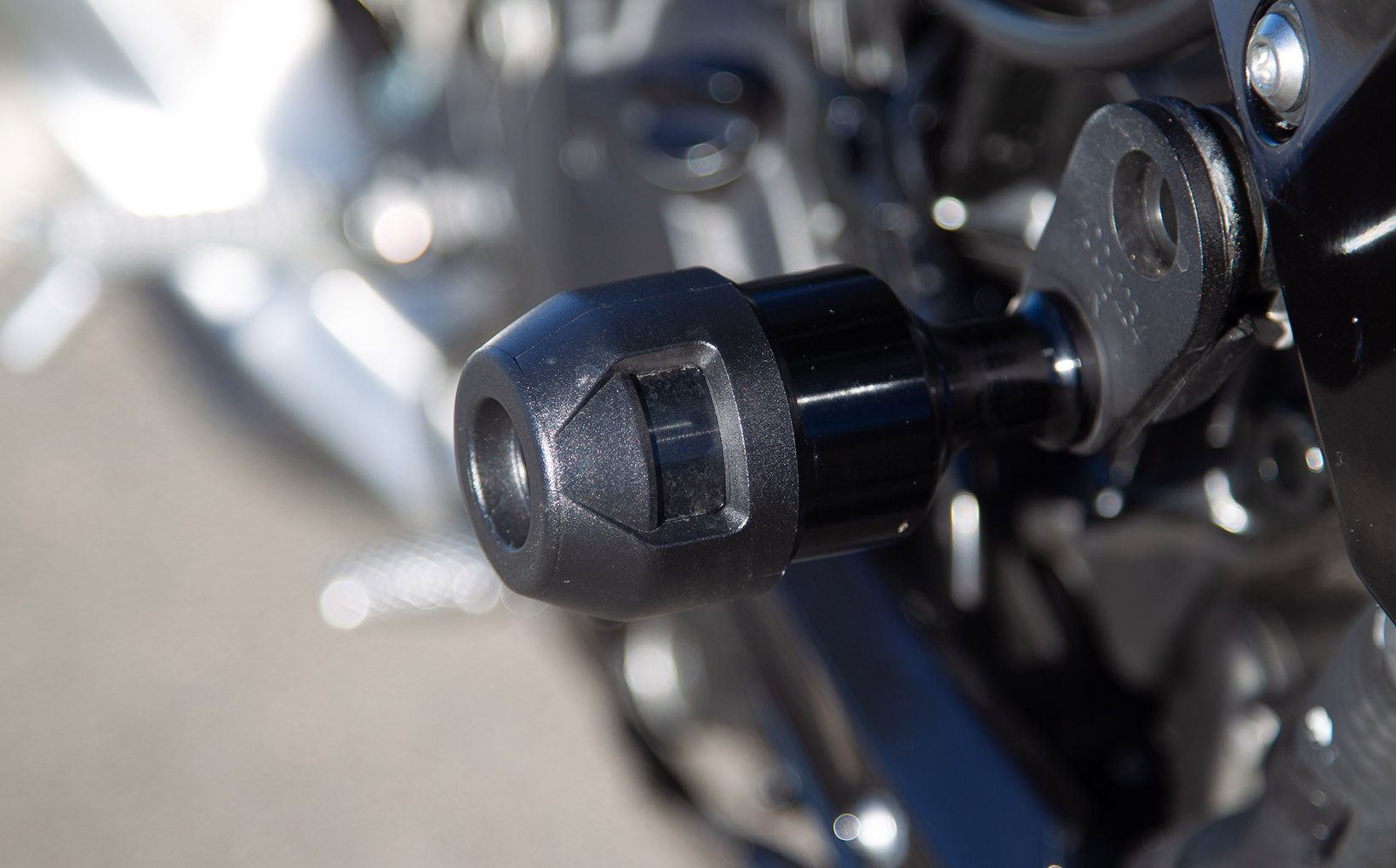 Protection knobs are an optional extra worth considering.

I loved the fancy instruments, especially the fuel consumption readout (average over 25km/L or 340km for a tankful, excellent fuel economy) and gear indicator.

With being a new rider, I do sometime forget what gear I am in and this helps a lot.

Another great feature is the Assist and Slipper Clutch. These have been around for a while, and Kawasaki claims the Z400’s is 20 per cent lighter, with a wider engagement range. This adds up to making it easier to get going, which is very true.

The slipper function comes into play when you downshift quickly (or do so accidentally) and there’s too much engine braking, which causing the back tyre to hop and skip. The slipper clutch absorbs those forces so they rear tyre has a better chance of staying in line and in control.

Kawasaki has also adopted LED headlight and taillights for the Z400. The headlight is brighter than the one on the Z300.

Although there’s no obvious luggage capacity on the Z400, there is a little space under the seat and there are luggage hooks built into the heel guards of the pillion pegs and hooks at the back of the seat so you can use a tailbag or strap something to the pillion seat. 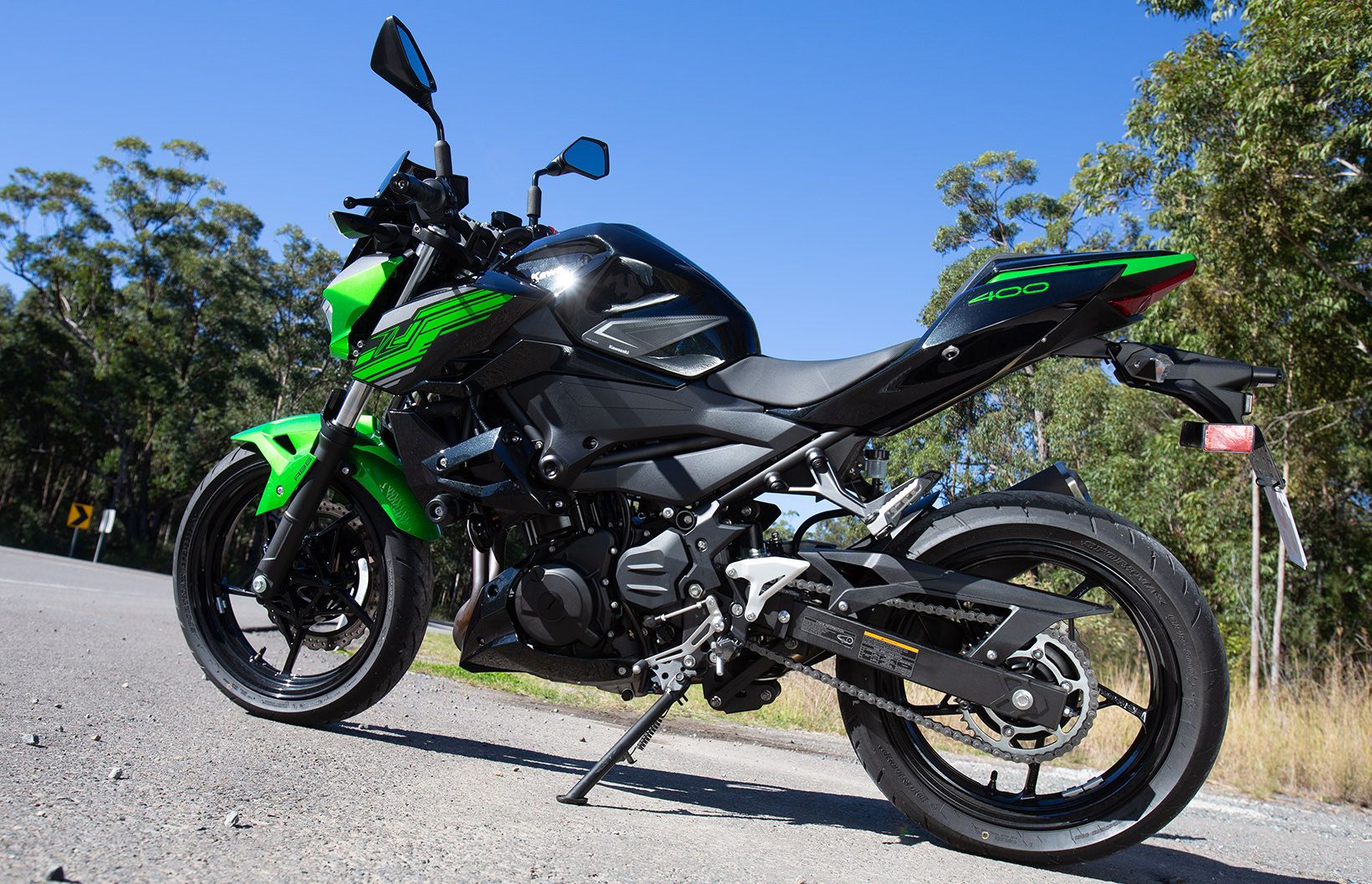 Starting and stopping over and over again in traffic you soon start to understand how this bike is amazing for the traffic game.

Riding this bike out of Sydney was my first time in so much traffic, but the Z400 was a delight to ride through town.

It’s a two hour ride home from Kawasaki HQ and I had a bad feeling that my wrists would hurt after a hour or so but was I mistaken – the only problem was keeping up with my old man on his 1300cc machine and how the seat is not great after two hours, but no shock there. The upright riding position is very comfortable, even on the freeway.

This was my first experience riding a twin cylinder bike any distance, and I was surprised by the vibration and bottom-end of the Z400. 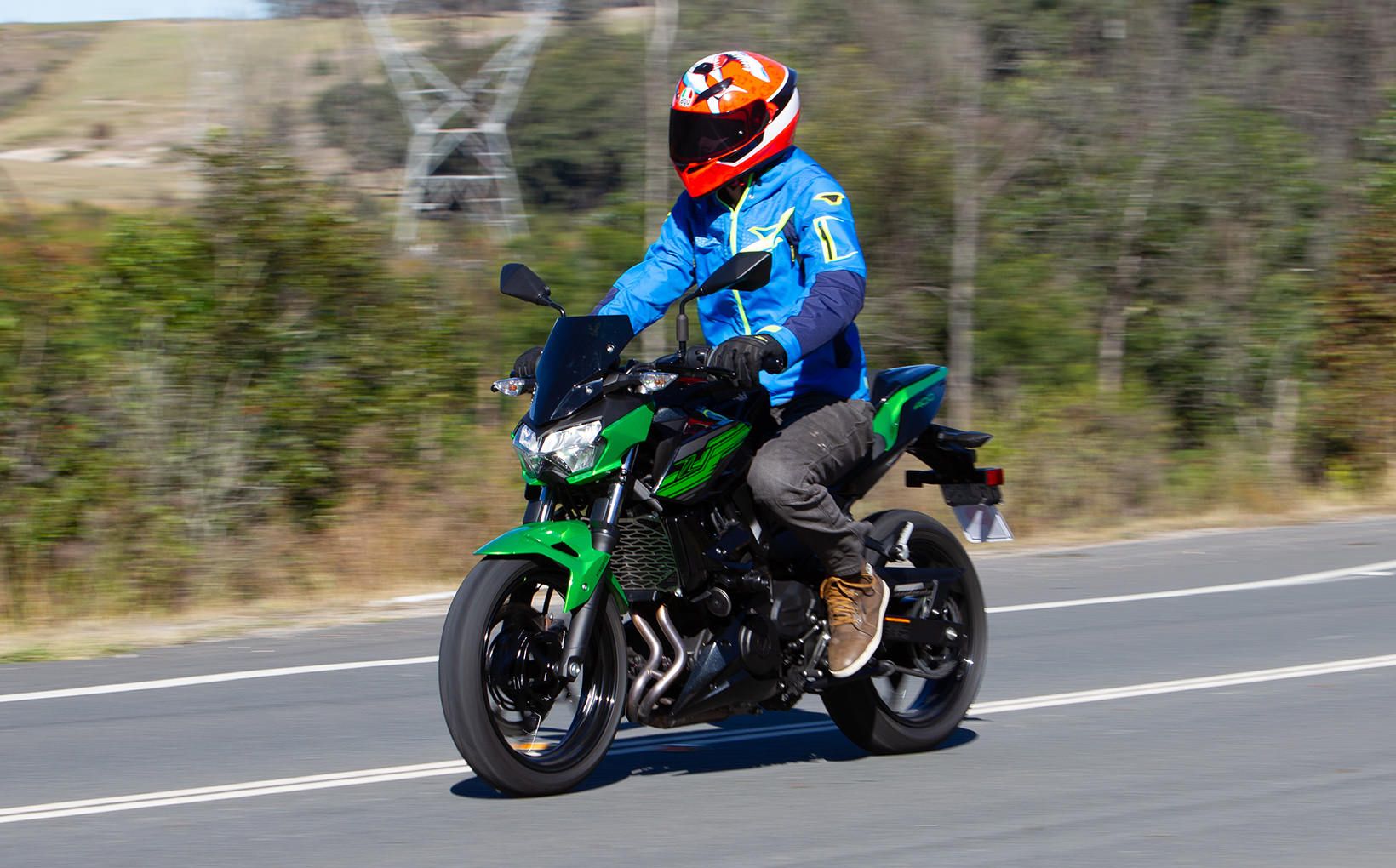 He’s right, of course – hold it in a gear lower than I would on my crazy-loud FZ-6 and the Z400 is willing, able and pretty quick for a LAMS bike.

Kawasaki claims the Z400 produces 15 per cent more power than the Z300, which is a big improvement. 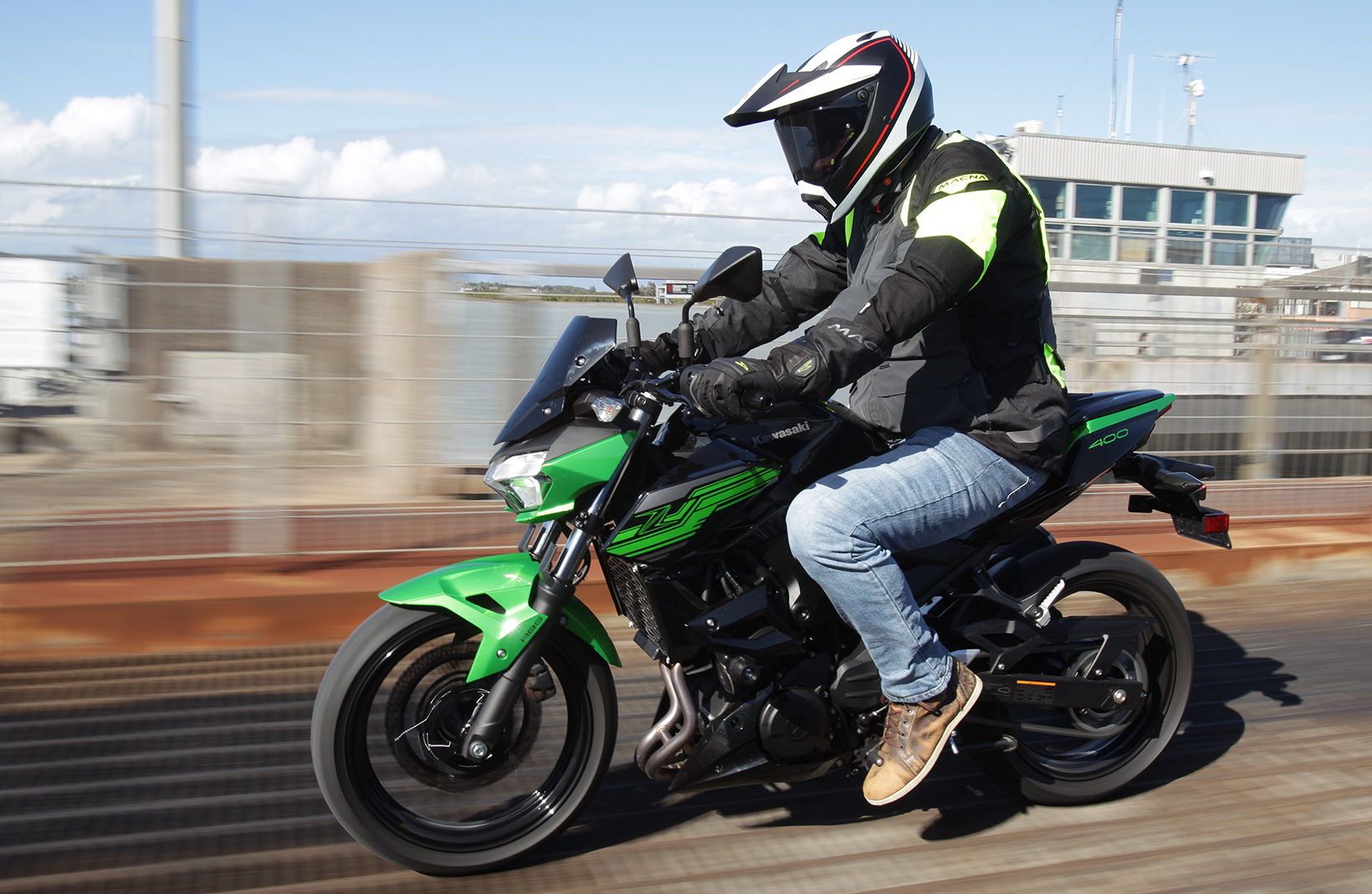 I’ve got a bunch of friends who don’t have bikes yet, but who plan to get one. They were pretty jealous of me getting to test the Z400 for Australian Road Rider, but the fact is this bike is very affordable.

I did some web searches and you could easily borrow enough money to buy a Z400 and some gear and pay it off in three years at $60 per week. Then you’d be off the P-plates and it would make a great trade-in on a bigger bike. 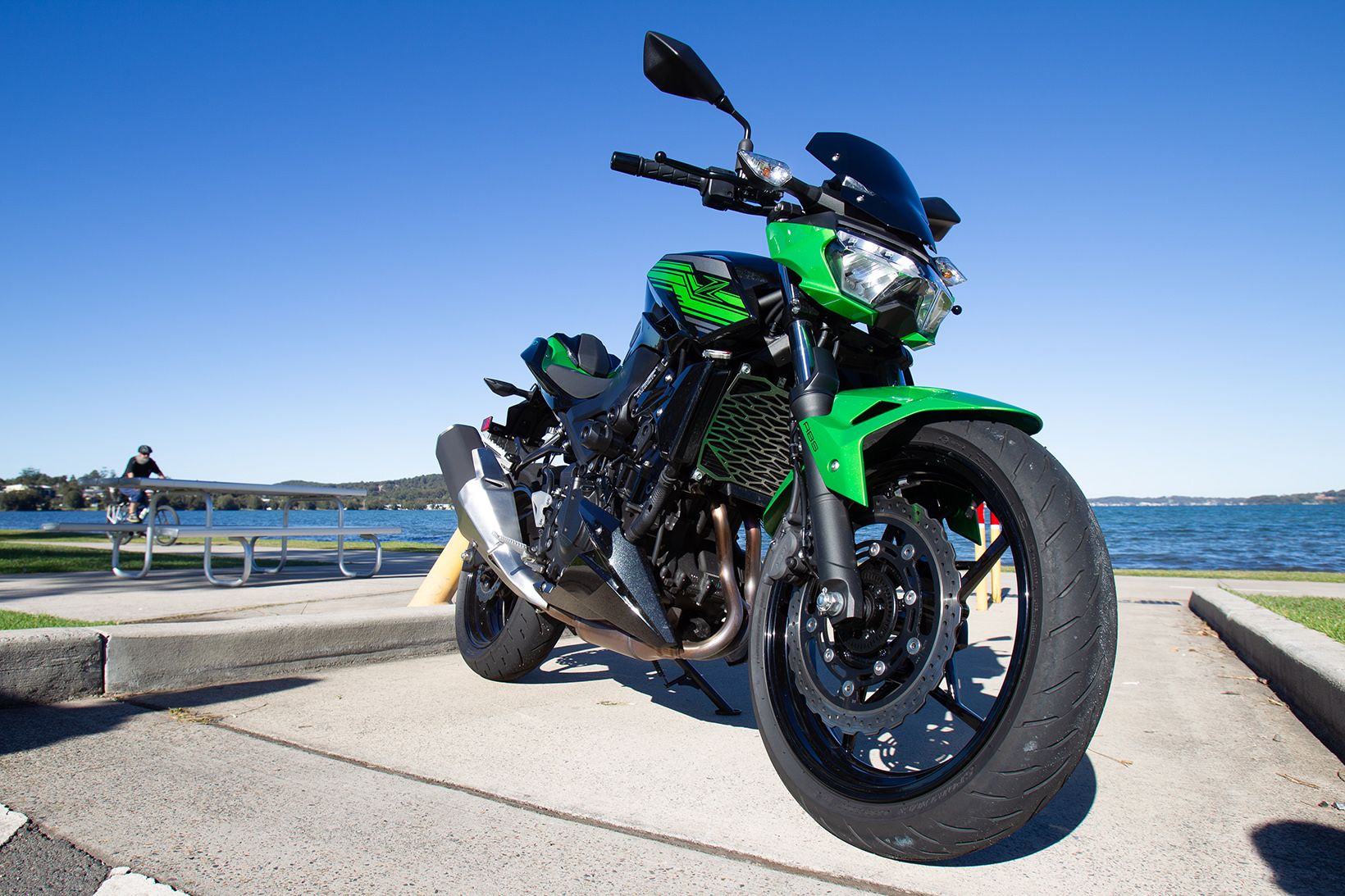 If you ever go down a winding road or need to carve up traffic, the Z400 has your back with great handling, quick braking, ABS and a seat height that will suit everyone. You won’t be disappointed with your choice of this bike. 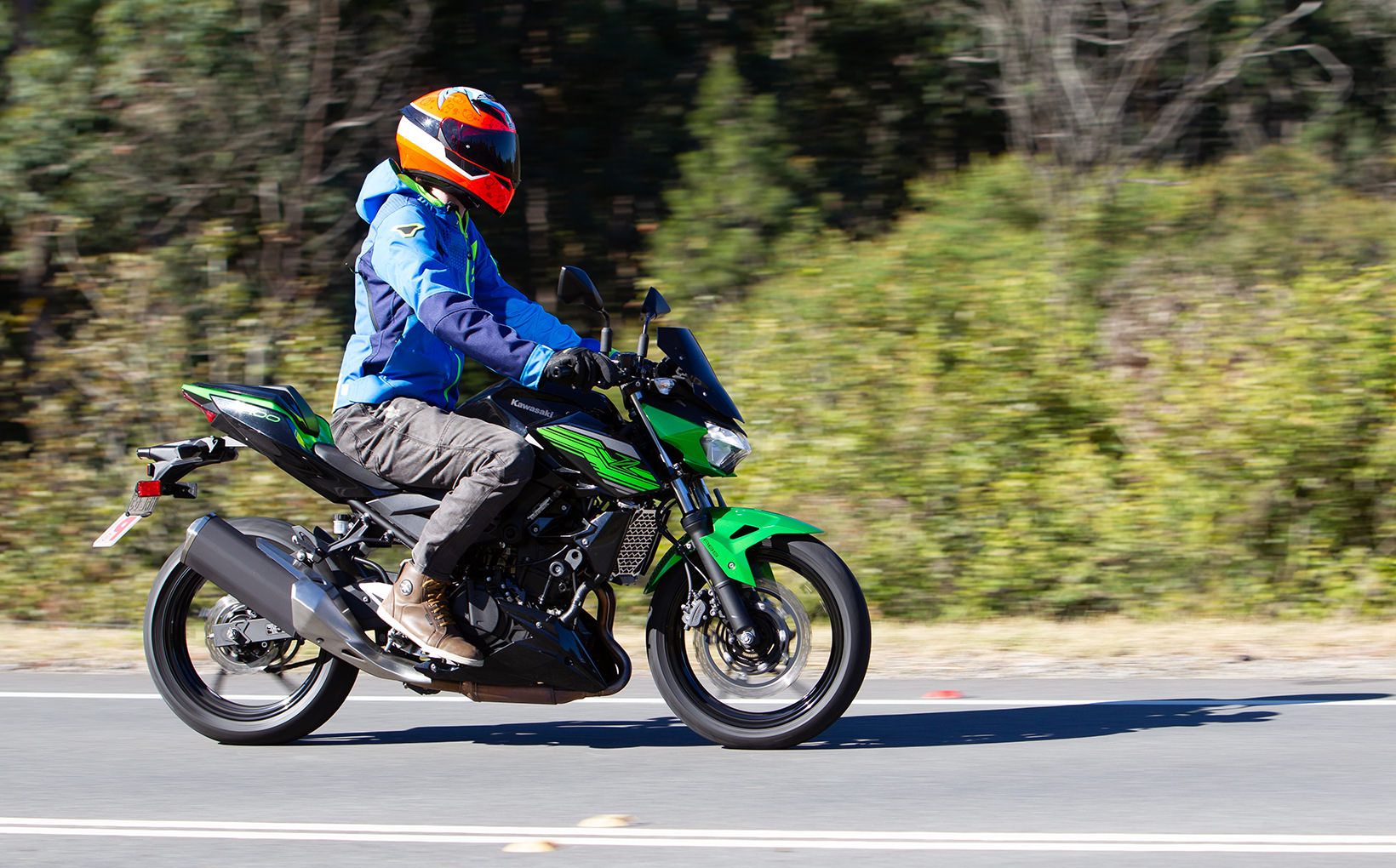