My lovingly restored 1957 FE Holden Special 'George' was originally bought by my Grandpa, John Elliott, new in 1957. He later sold it to my great-grandpa, Gwynne ‘George’ Elliott, in the early 60s, and he drove it until the mid-90s. It was then garaged before he went into a nursing home in 2005, when it was bequeathed to me. In 2008, after my great-grandpa passed away, I began restoring the FE for my Year 10 International Baccalaureate Diploma Personal Project.

My dad, Anthony, and I pulled apart the exterior, then stripped the paint, as it had bad surface rust. We also replaced parts of the door pillars and the bottom of the doors, as well as doing the lead loading, undercoat and wet rubbing. Dad taught me step by step and I did as much as I could. Only the more difficult bodywork and the two-pack Corsair Tan and Castle Grey was done by Dad’s mate’s crash-repair shop. Of course, things like chrome-plating we couldn’t do, so I went along to the workshop to watch and document the processes, a requirement for my 40,000-word thesis and photographic journal.

Since restoration 'George' has been featured in Classic Car Magazine, Street Machine and won the Holden Dream Cruise Show and Shine. My husband, Matt, and I enjoy driving her around the country side when the weather is fine, and aren't afraid of taking her a fair way from home.

Catch us around the Southern Adelaide and Hills areas.

The extra chrome stip is not factory - it’s Chrysler Royal, from my great-grandfather’s time working at the local Chrysler factory. So the flashing is part of his history with the car, and we decided to keep it along with other changes he’d made, calling them ‘Grandpa’s mods’. It’s what makes this car unique.

Addditionally the SA-made cast-alloy Silent Seal rocker cover was one of our own period finds. Dad has a good knowledge of the car industry; therefore he wanted any additions to be period-correct and local, or something that Holden offered as an extra. The 132.5ci is the original engine; we’ve only done oil changes and plugs and added an exhaust and period-correct Genie headers. 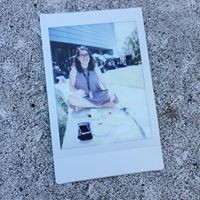