The North Shore Sporting Car Club’s Whiteline Tarmac Rally Sprint series has been running for over five years now, delivering excitement at every turn for amateurs and rally veterans alike. The Whiteline series’ Media Liaison John McCredie explains, “These events give drivers and navigators the chance to stretch their competitive legs in a safe, closed course environment, without having to commit to a full rally.”

The Western Sydney International Dragway complex at Eastern Creek was the venue for all rounds, held on Thursday evenings over the final three months of 2019, with the Rally Sprints returning for February 2020 and closing off mid-March. 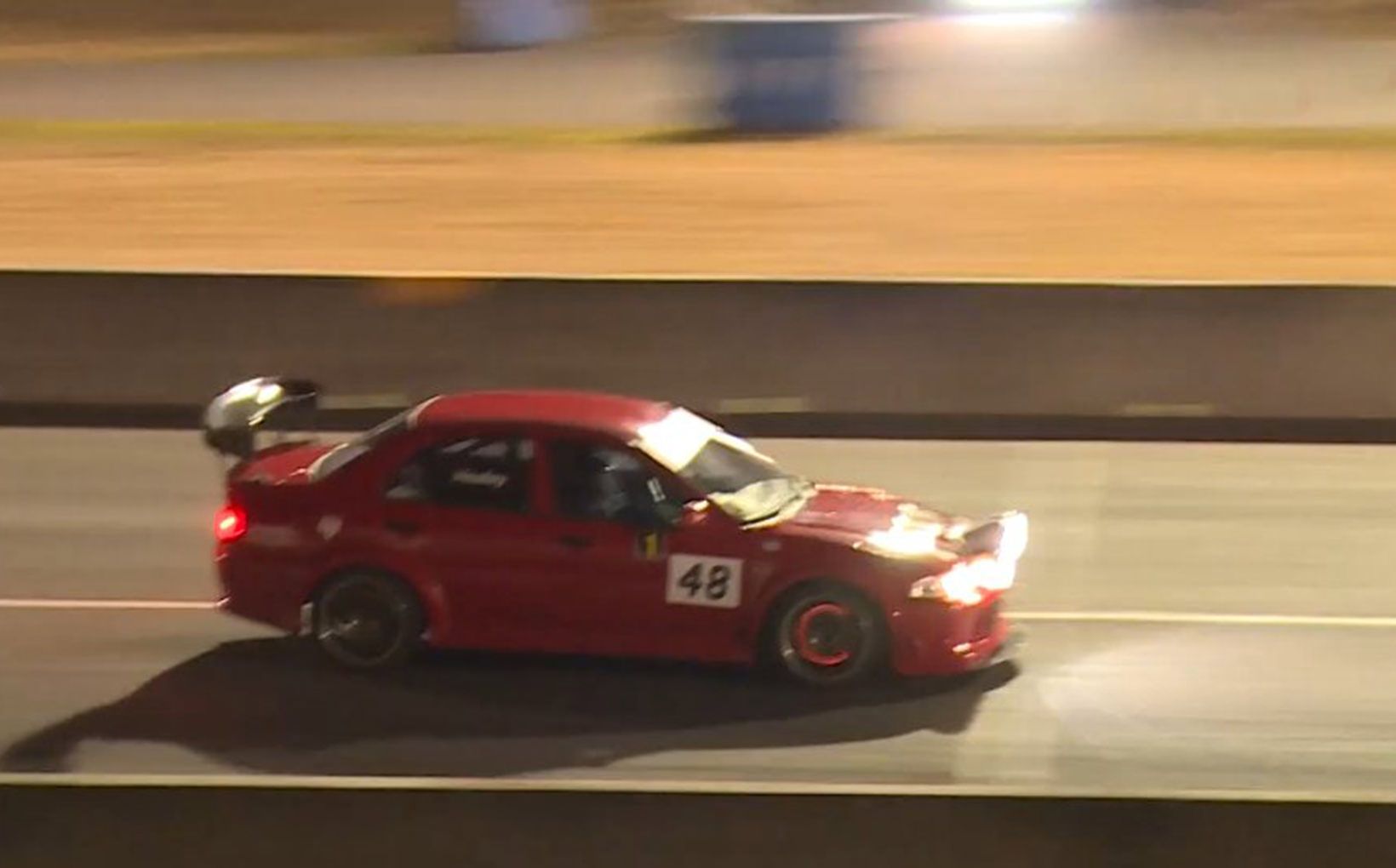 The Rally Sprints’ opener kicked off 17 October with a brilliant, clear night; perfect for racers to get their foot down and strut their stuff. Series favourite Phil Heafey broke a driveshaft during the second run in his Mitsubishi Lancer Evo 6, allowing the pairing of Michael Harding and engine tuner Benjamin Perry to come through and scoop outright honours in a WRX STi. Notably, Troy and Gary Nicholson muscled a big HSV Coupe4 around the tight circuit to finish just 2.9 seconds behind in second place; a fair effort in a vehicle not known for its tarmac rallying prowess. 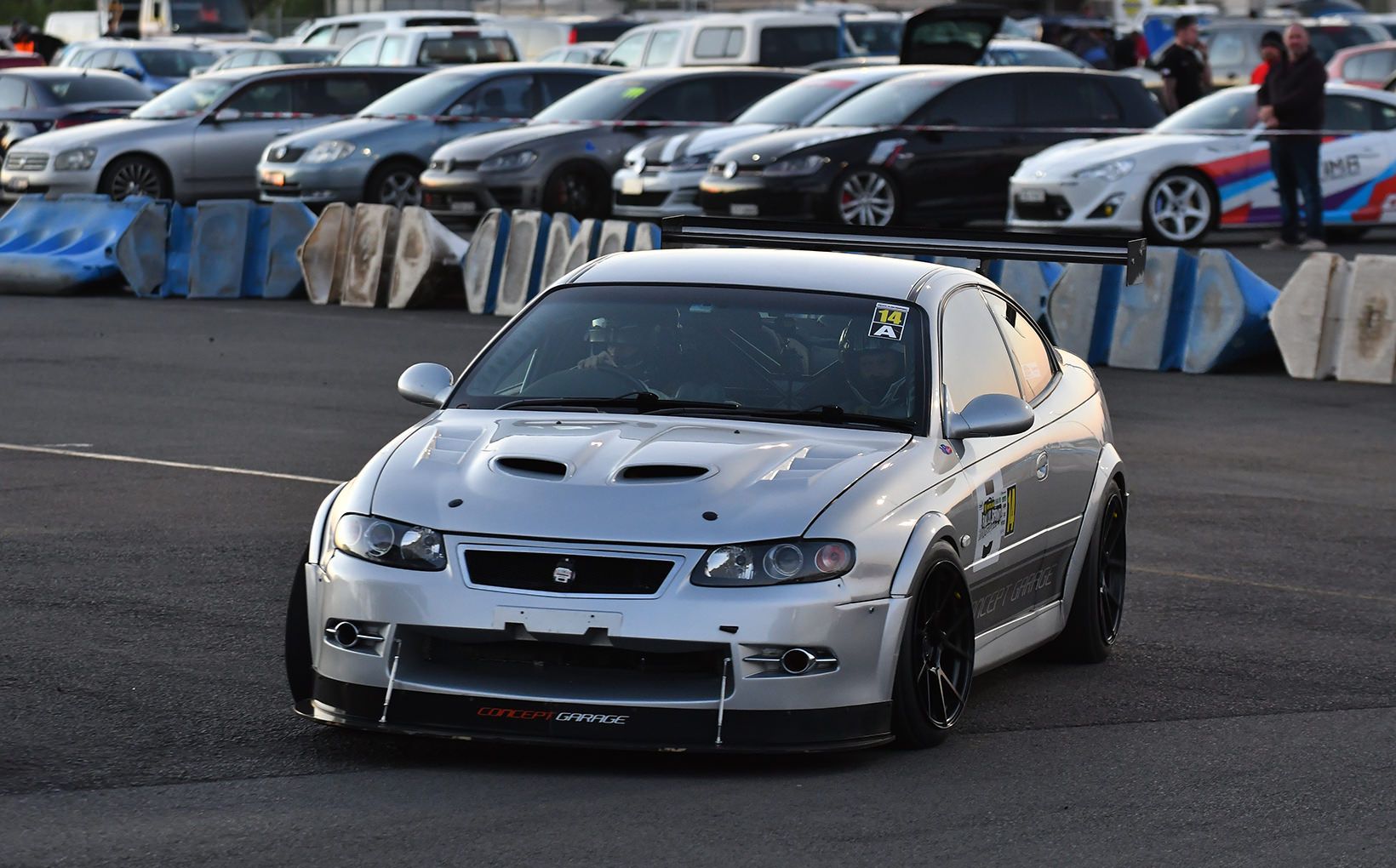 A new addition to the Sprints for 19/20 is the Go Fast Bits Junior Development Program. John says, “This is a coaching program specifically tailored for Juniors. Professional Rally aces Brendan Reeves and co-driver Dale Moscatt do the mentoring, with Hyundai providing an N-Performance i30. Successful applicants are essentially getting a Hyundai factory drive for the evening.” 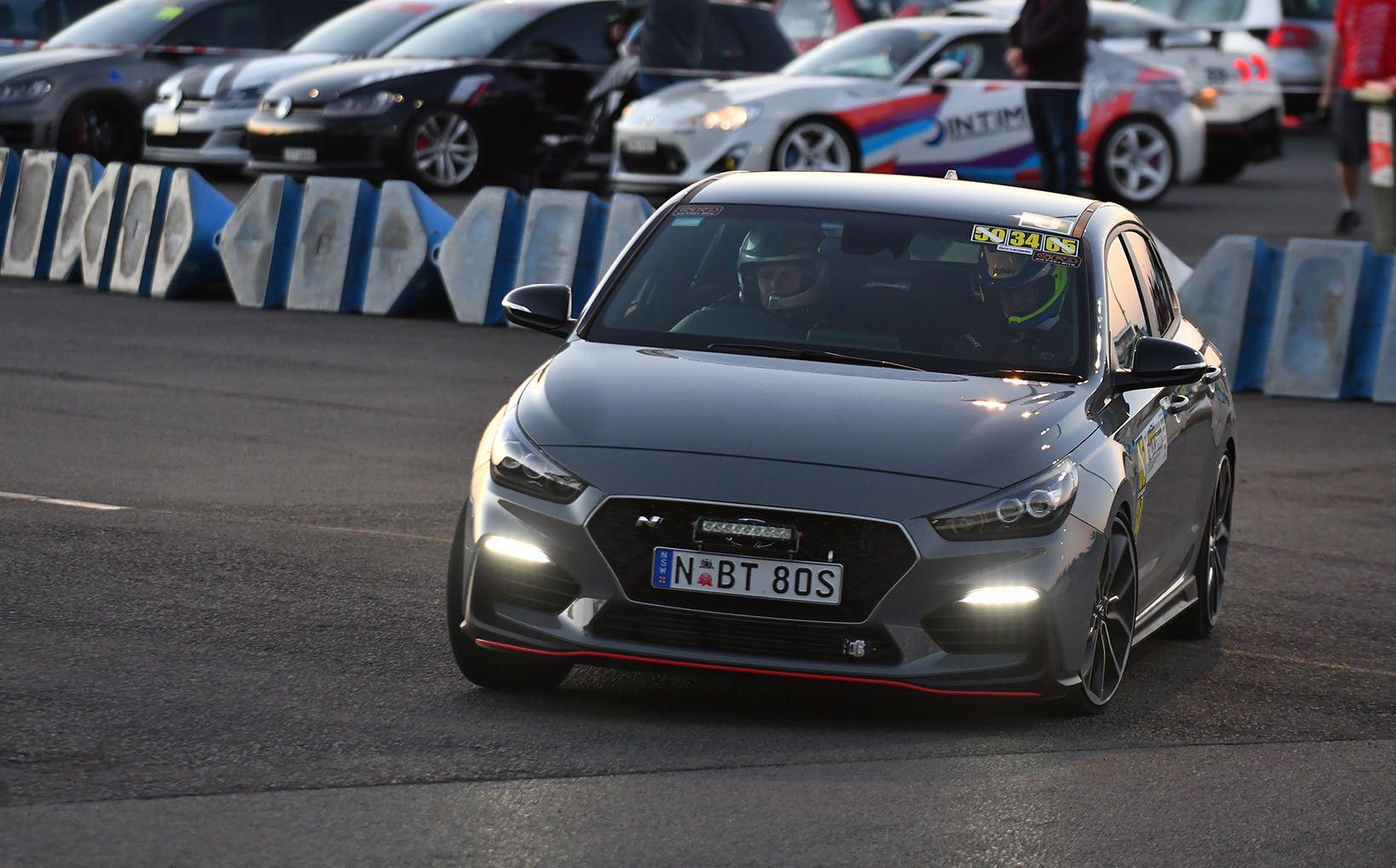 Windy conditions for November’s Round Two eased as the evening wore on, not that this worried the silent efficiency of Mark Caine’s Tesla Model S. Its hushed movements sat at odds with the aural racket of Jackson Frew and Cath Donohue’s ratty Datsun 1600 wagon, with Jackson saying, “The giggle dyno was off the charts tonight! Rally Sprints never fail to deliver!” 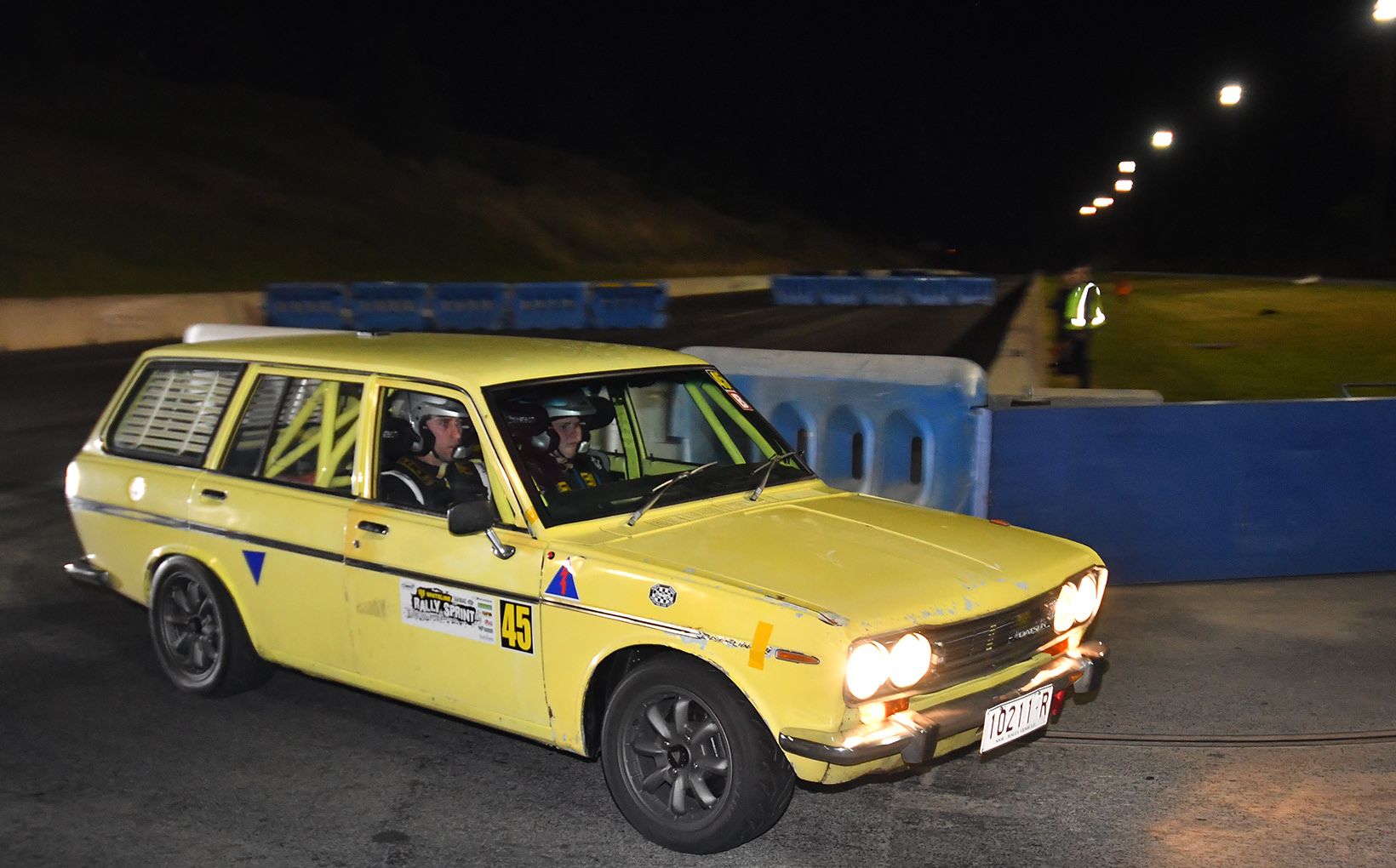 Third placegetter Jake Lambie, partnered with Iain Lambie, had the most to lose by punting his Evo 5 around the track. Achieving a solid third; his second consecutive podium of the series, his car was scheduled for crucial wedding duties the following weekend. Michael Harding placed second, but not without drama, “I messed with the brake bias and kept locking it up,” he said. Phil Heafey took advantage of Harding’s mechanical mishap, winning his first event of the 19/20 Rally Sprint with Brandon Dick as his wingman. 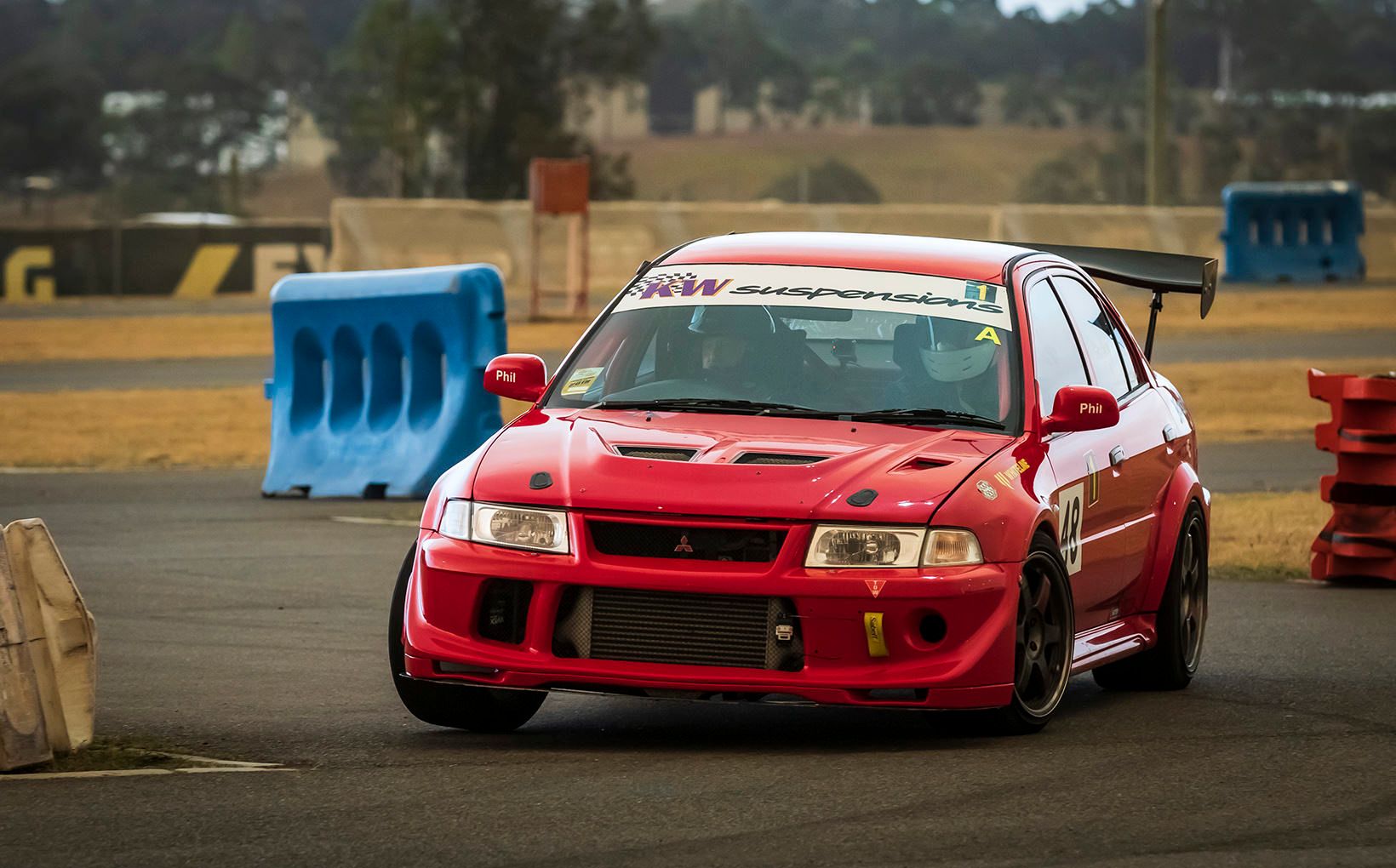 Round Three held on 5 December was marred by 35-degree heat and insane, bushfire-compromised air quality, with WSID bathed in an eerie orange light well into the evening. Up-and-comer David Isaacs landed himself in third place in the challenging conditions, offering this pragmatic advice, “Everyone is driving harder and faster; you have to make every bit count.”

Michael Caine and Tom Vadoklis put a rear-wheel-drive vehicle on the podium for the first time in 19/20, earning second place in their rotary-powered Mazda RX7. For Caine, the secret wasn’t outright speed, “We’re not good on the straights,” he admitted, “but we’re good at the ends of the straights. In other words, we’ve got good brakes!”

Phil Heafey teamed with Michael Hiscoe for a well-earned win, then announced he was temporarily quitting Rally Sprints in favour of caravanning around Australia. In parting ways with the Whiteline Tarmac Rally Sprint series, he said, “So often in motorsport, you can feel like you’re up against it with the marshals and officials, but here it’s just a big, happy family.” Although his exit shook up the standings going forward, he promised to return once his grey nomading duties are over. 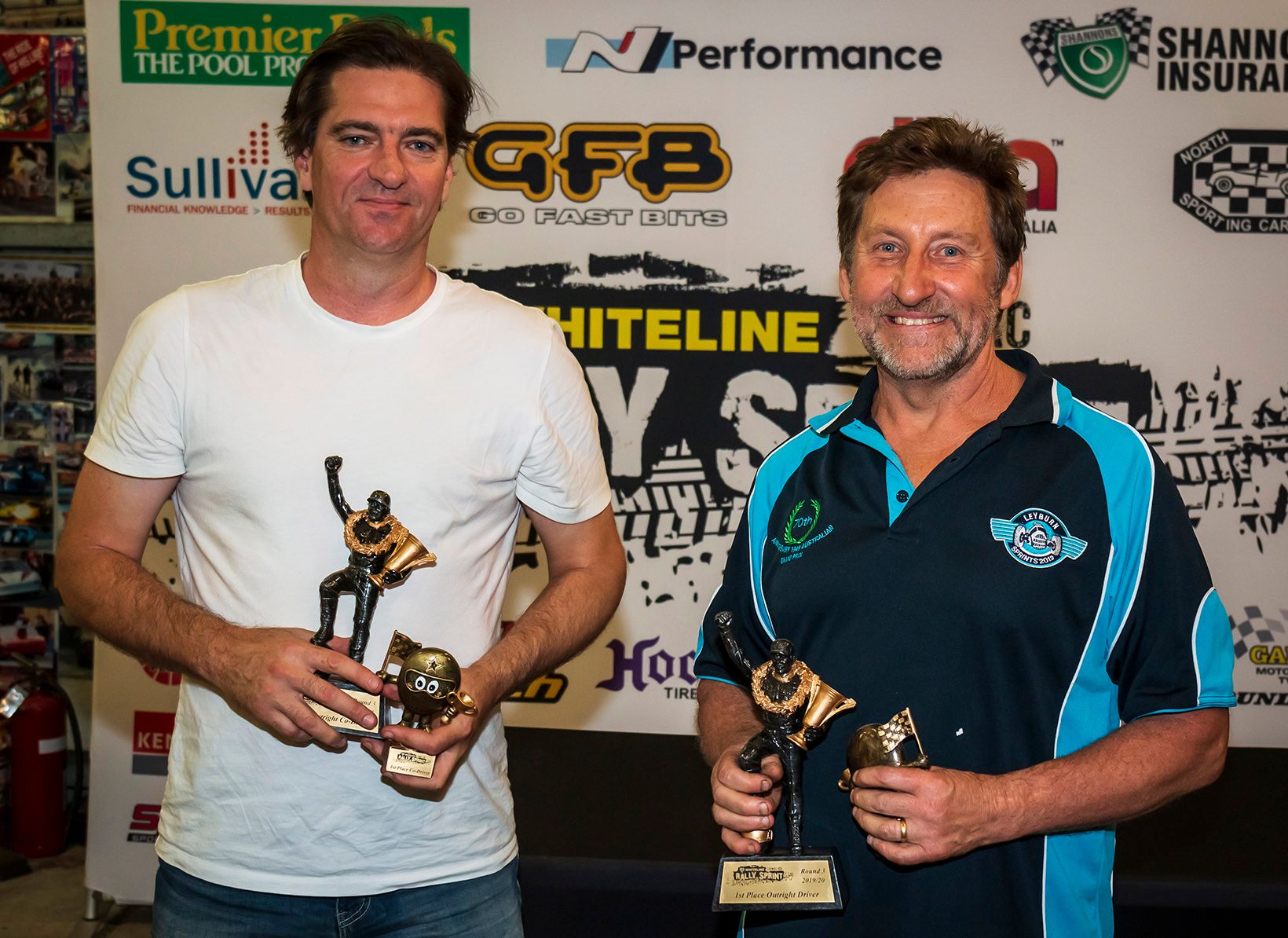 Following the Christmas break, rain greeted competitors for February’s Round Four. David Isaacs, now a favourite to take out the Series following the departure of Heafey, had a problem with his rear suspension, putting him out of contention for the round.

Joshua and Matthew Redhead placed third in their Mitsubishi Lancer Evo 5, but it was the duo of Harry Bates paired with Hayley Walton and Neal Bates (paired as always with Coral Taylor), who took out second and first outright respectively.

Neal and Coral have a massive history in Australian rallying having won the Australian Rally Championship in 1993, 1994, 1995 and 2008, backing it up with a second place in 1996 and third in 1997. The pair attained six more ARC second places between 1998 and 2007 as well as a win in the 1995 Targa Tasmania, proving their prowess isn’t confined to the dirt. 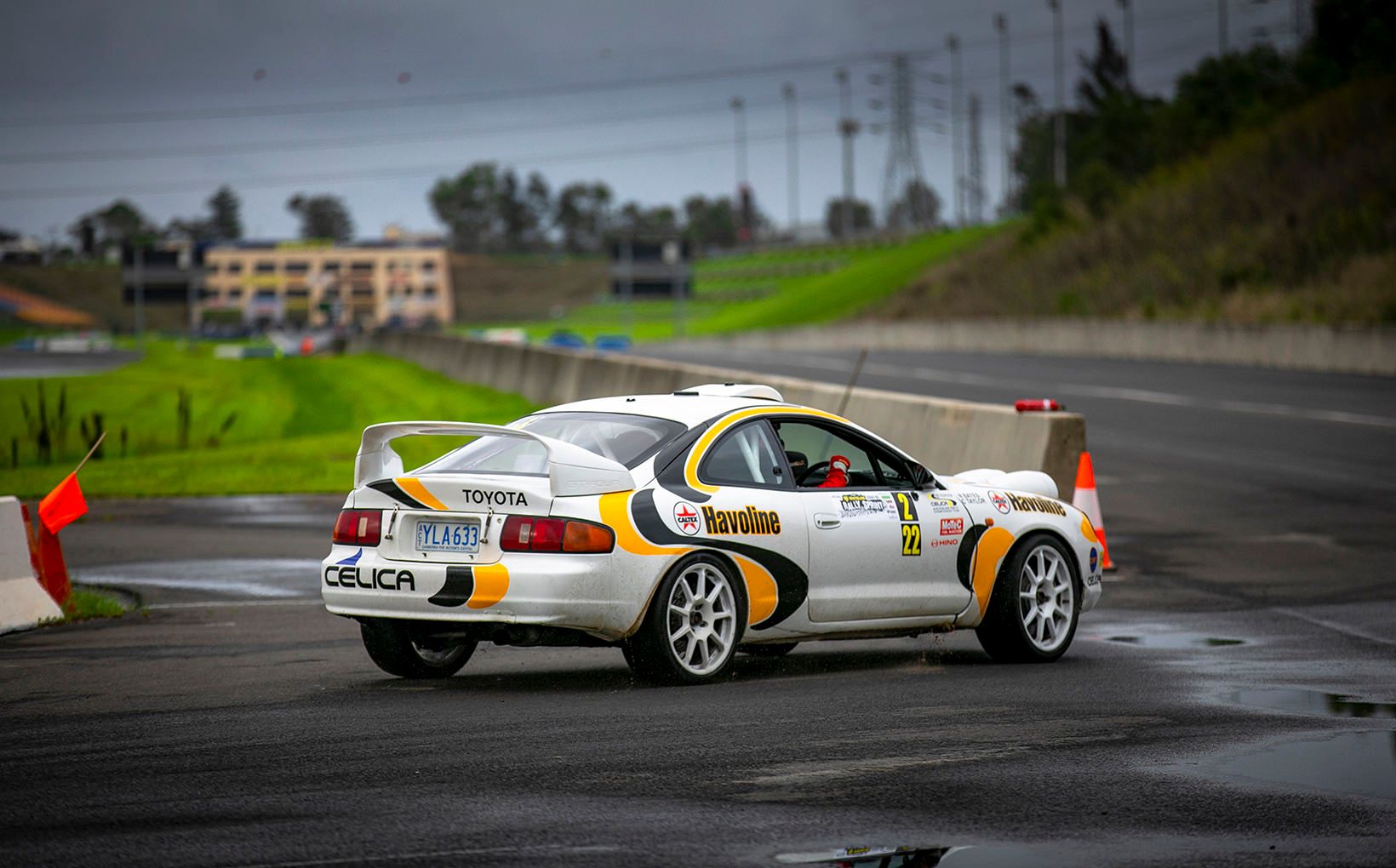 Spectators and fellow competitors alike were treated to a piece of history; the father-and-son Bates team achieving their Round Four 1-2 podium in a certifiability vintage ST205-model AWD Toyota Celica GT4.

The final round in March snuck in just before the COVID-19 emergency, with a pit area packed with almost 90 cars; drivers, navigators and spectators enjoying the beautiful 25-degree autumn weather. Joshua and Matthew Redhead achieved a third-place podium finish for the second time on the trot in a Lancer Evo 5, with Dean Buczynski and Blake Lovell four seconds ahead in their Subaru WRX.

Winner on the night was the Lancer Evo 9 of navigator Aeron Napper and driver David Isaacs who, despite mechanical issues midway through the season and the dominance of Heafey in the early rounds, was also crowned the overall Rally Sprint series winner. 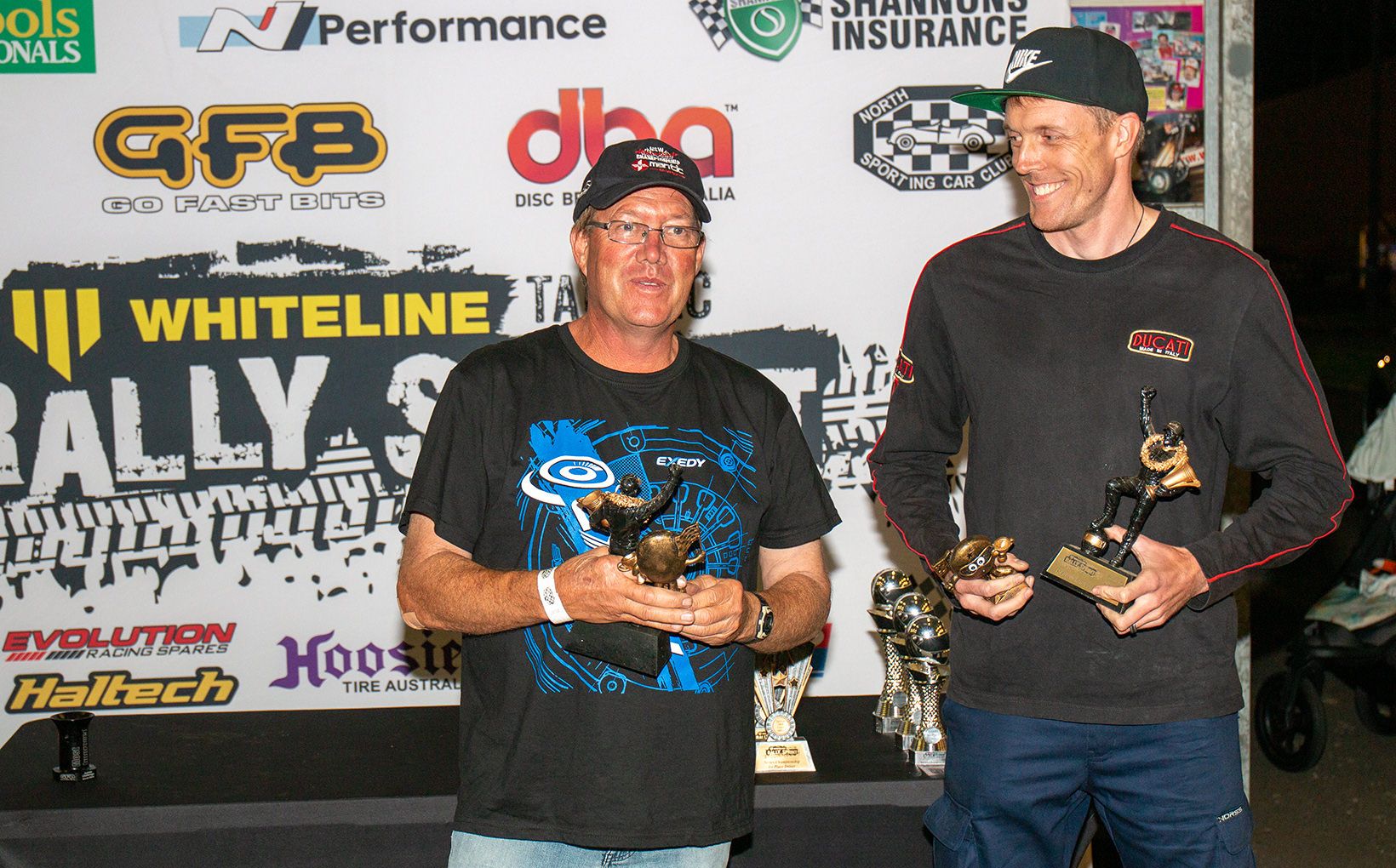 John McCredie was enthusiastic about how the series played out, “We really did have every extreme; in Round Three, the bushfire smoke was so bad, everything went yellow. For Round Four; we slipped around in the rain.”

The 19/20 season attracted all manner of beasts, from fully electric Teslas to AJ Evans’ six-speed, twin-turbo BOSS V8-powered Falcon station wagon! This stands testament to the flexibility and openness of the Whiteline Tarmac Rally Sprint Series; it truly is a ‘run what you brung’ style of grassroots motoring, with some throwing their daily drivers down the track next to Australian Rally Championship royalty and everything in between. 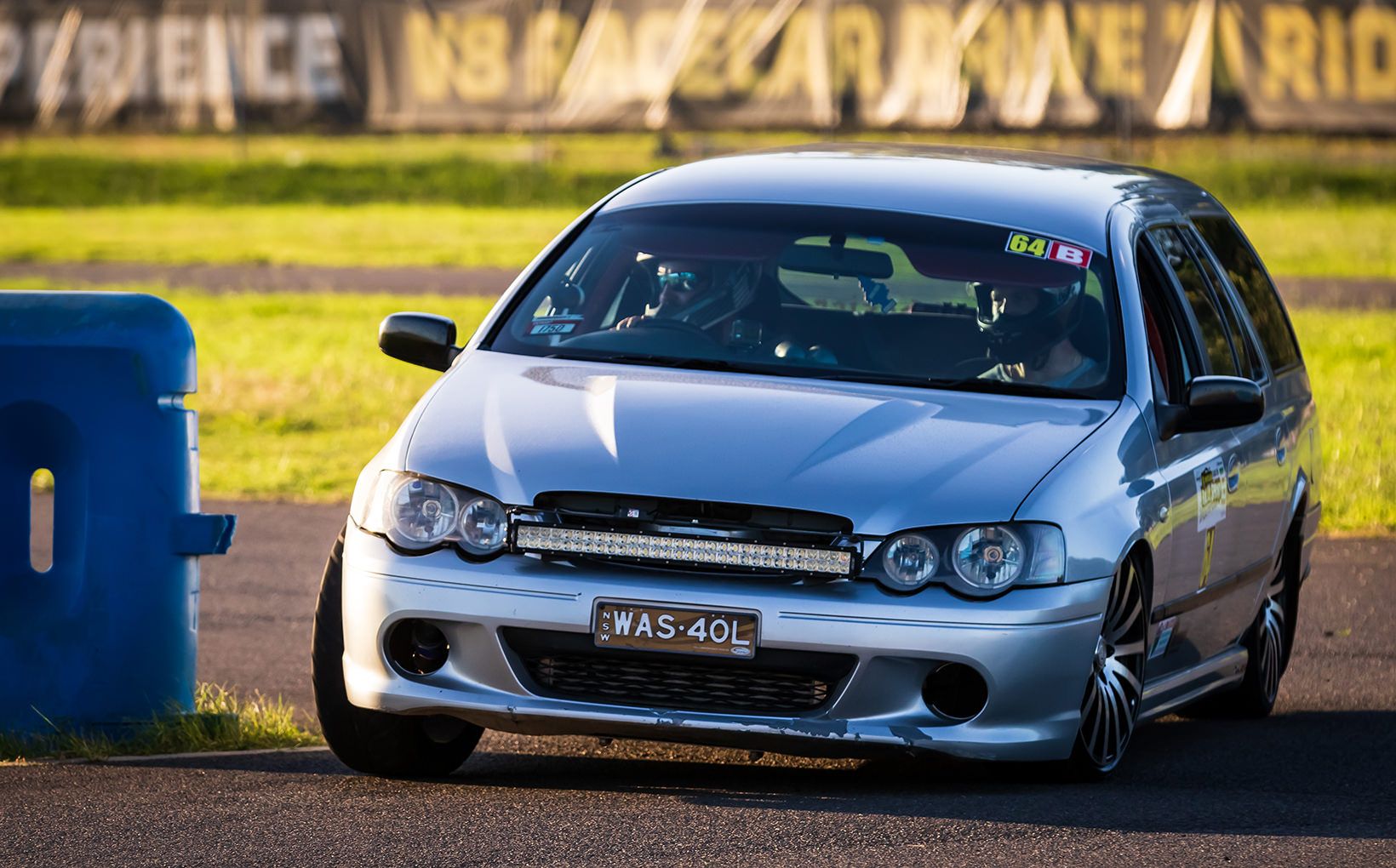 You too can be part of this amazing series; all you need is a car; entry requirements are generous and although some competitors will field purpose-built rally machines, plenty will contend in whatever their budget allows. Here are the Series FAQs: https://nsscc.com.au/twilight-rallysprint-faq/

Keep an eye on the North Shore Sporting Car Club website or Facebook Page for when entry opens for the 20/21 Whiteline Tarmac Rally Sprint series. The first round of the season is scheduled for 15 October, so pencil that in; it’s going to be a hot summer 20/21.