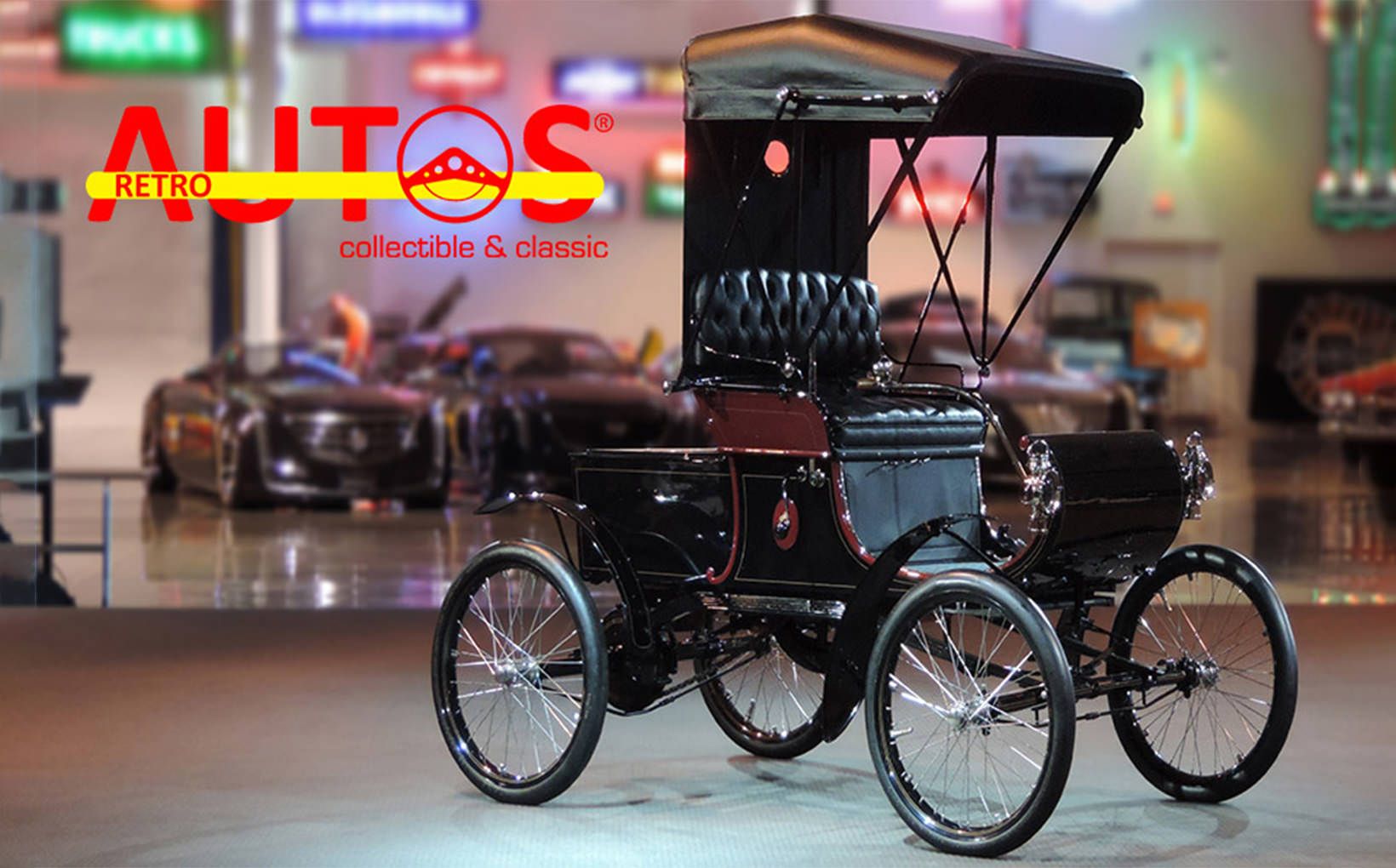 Since cars first appeared there have been many technological and design improvements.

But one thing has remained largely unchanged, and that’s the steering wheel.

Back in the late 1800s when cars first appeared, they mostly were steered by tillers. Henry Ford’s first car—he called it a quadricycle—featured a tiller.

That automotive pioneers opted for a tiller is not a surprise.

For thousands of years, people had used tillers attached to rudders to steer watercraft. Their use as directional devices for land-based motorised conveyances was a perfectly logical move. 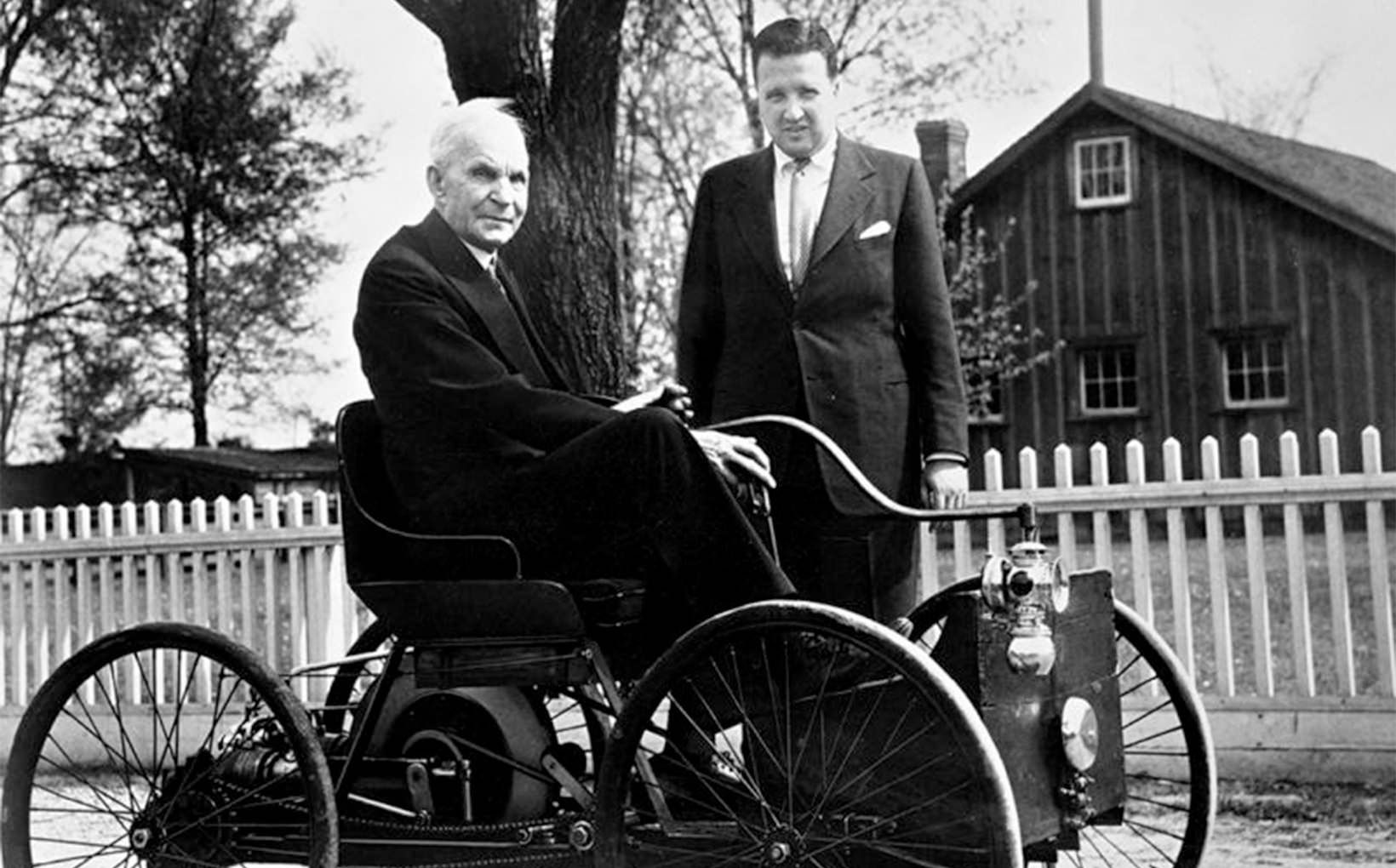 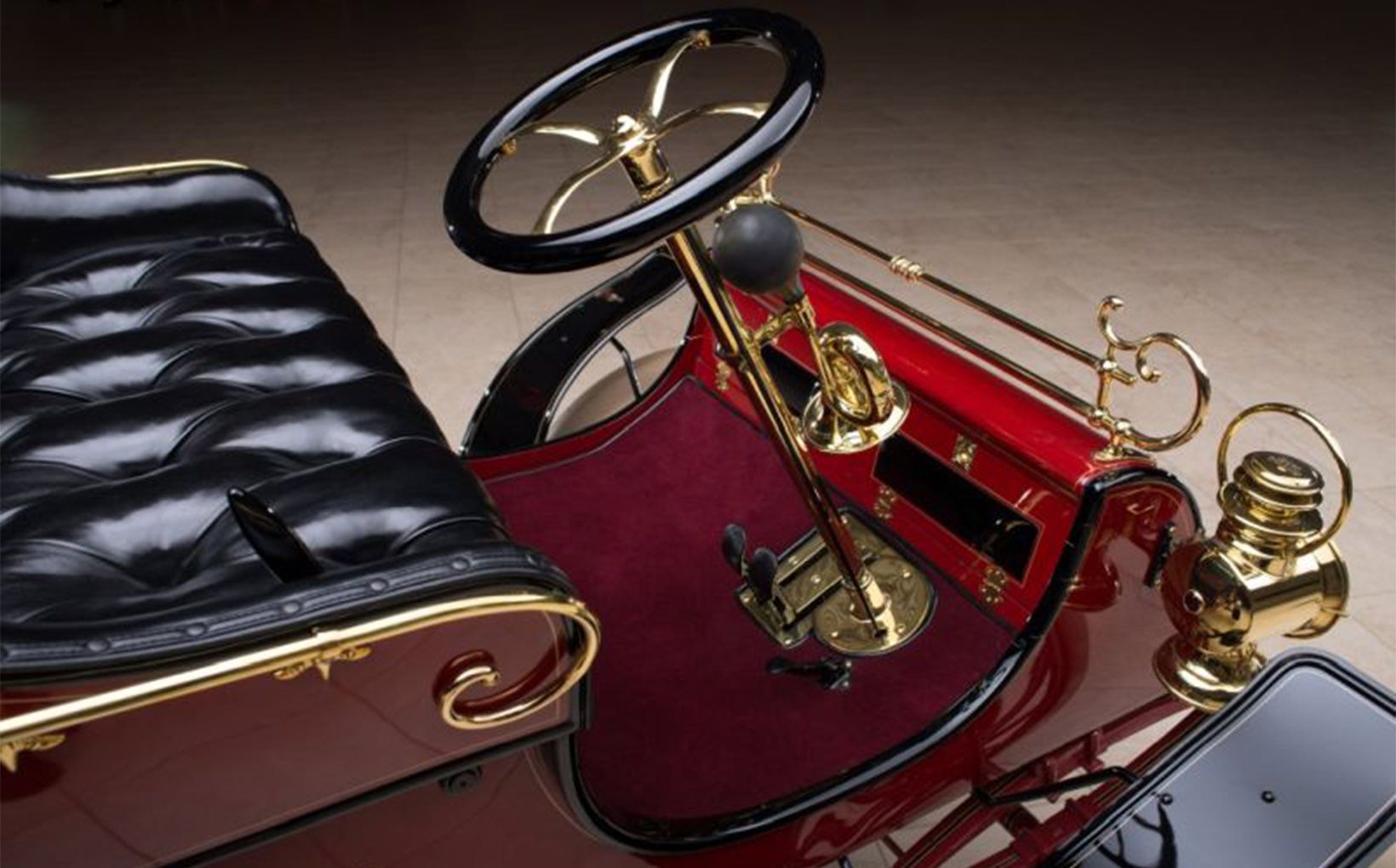 Automotive folklore says that in 1894 an entrant in the Paris to Rouen “race”, Alfred Vacheron, employed another nautical steering device to negotiate the roads in his Panhard. It was a wheel. On land it was attached to a shaft, which linked to a mechanism that turned the front wheels of his car.

Vacheron’s invention was the first recorded use of a steering wheel. Other manufactures quickly threw the tiller overboard in favour of the smaller and more manageable circle of wood and steel.

Since then, the steering wheel has transitioned from a simple directional control device into the command centre of a car. Sound and communication systems, cruise control, gear selection, air bag and horn are all now located on the once humble circle. 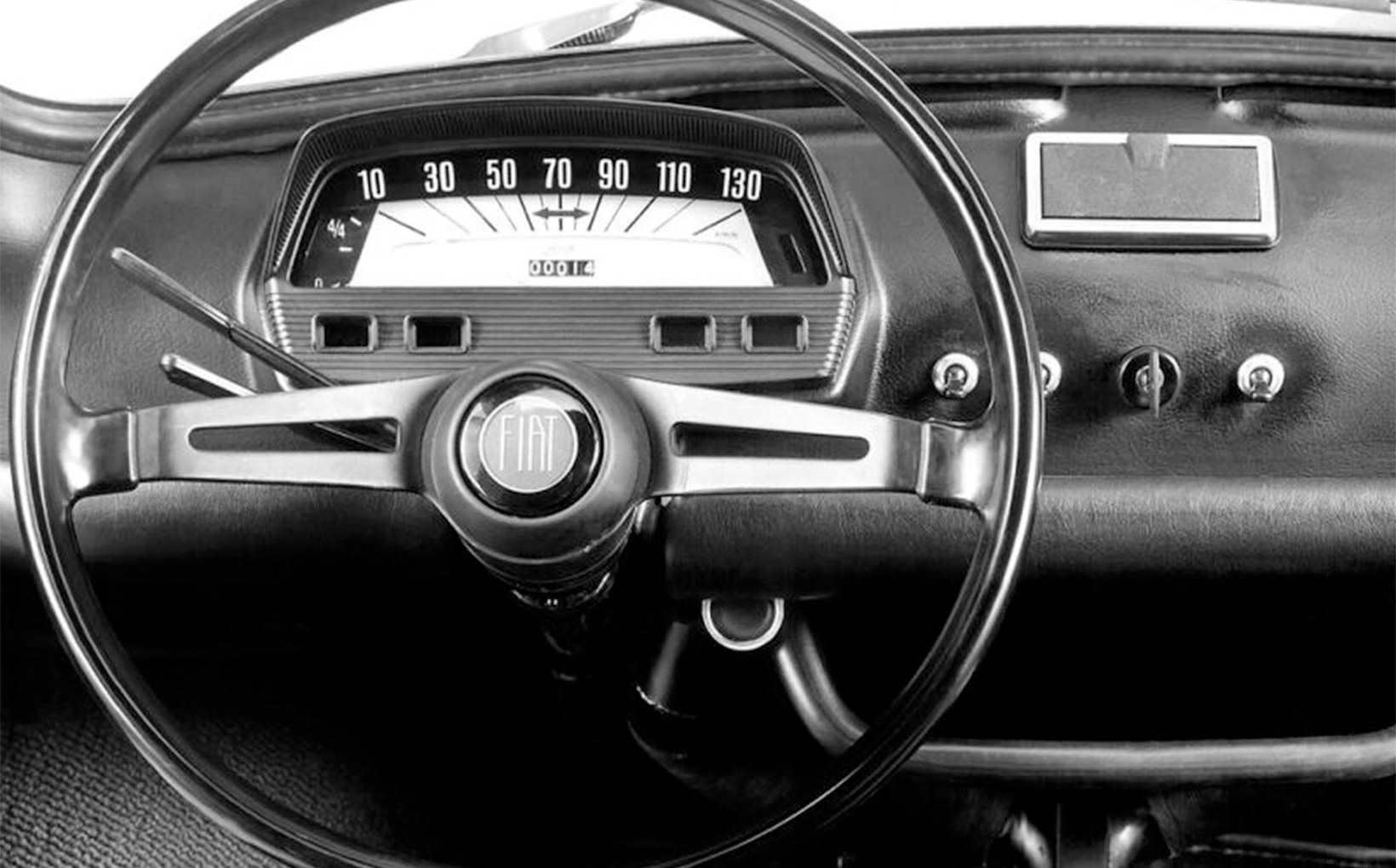 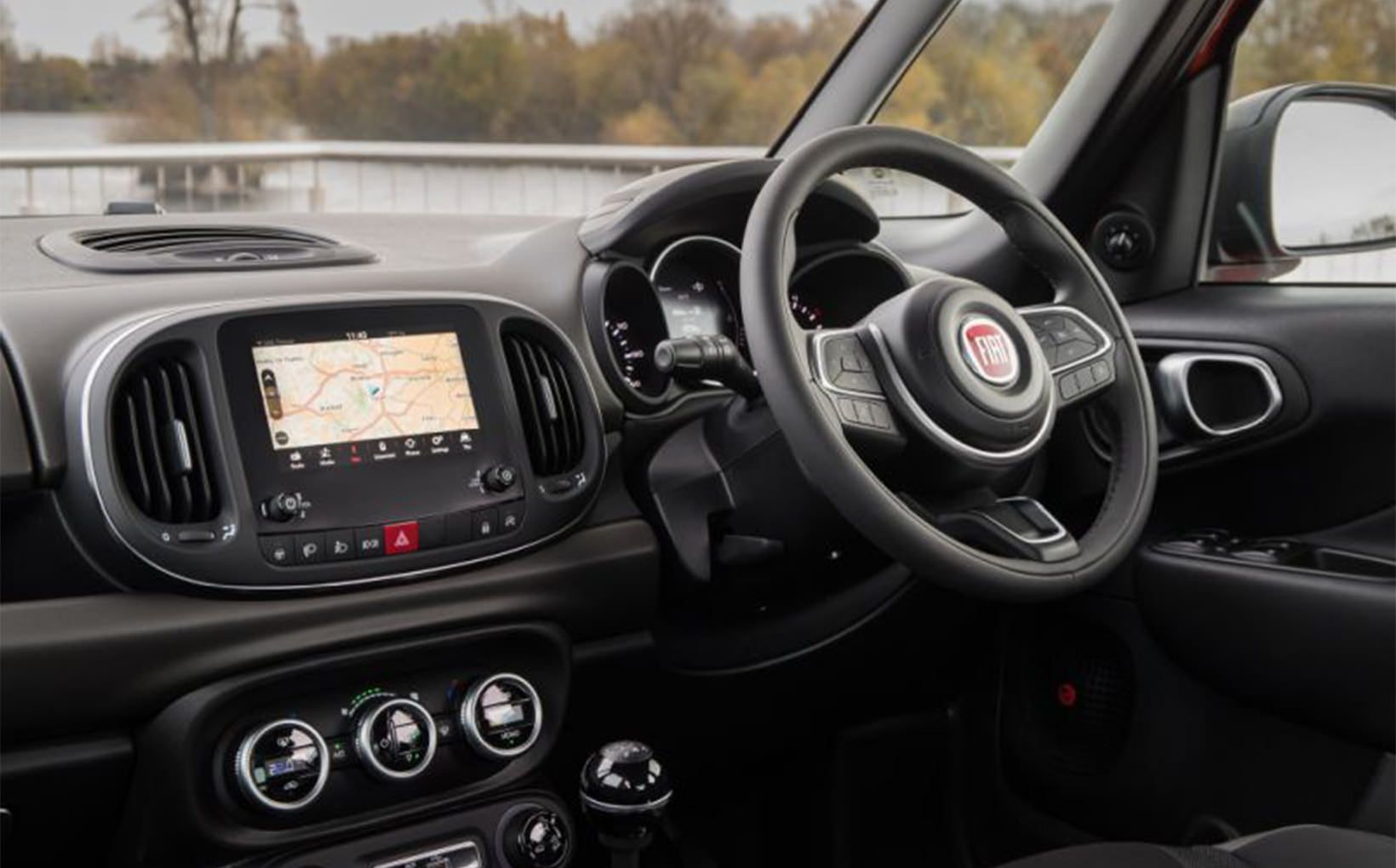 Whilst power steering is taken for granted in the 21st century, those of us of a certain age well remember with absolutely no fondness, the task of driving a car without assisted steering. The pulling and shoving of a large steering wheel while attempting a reverse park and the muscle building capabilities of a three-point turn are now distant memories.

The story goes that a Mr G.W. Fitts obtained a patent for a power steering system in 1896. In 1902 Frederick W. Lanchester patented a hydraulic power system. In 1926, an engineer with Pierce Arrow, Francis Davis, developed a system suitable for use on a car. But few car makers were interested.

In 1939 Davis’ creation was tested by General Motors. Then World War II broke out.

The US military demanded its tank recovery vehicles, armoured cars and other extremely heavy equipment needed assisted steering to be drivable. By the end of the war, over 10,000 power steering equipped vehicles had been built and the technology was well on its way to commercialisation.

Chrysler was the first to fit it. The recipient was their 1951 Imperial model. Cadillac followed in 1952. In 1954 all Cadillac models had power steering as standard, a world first. 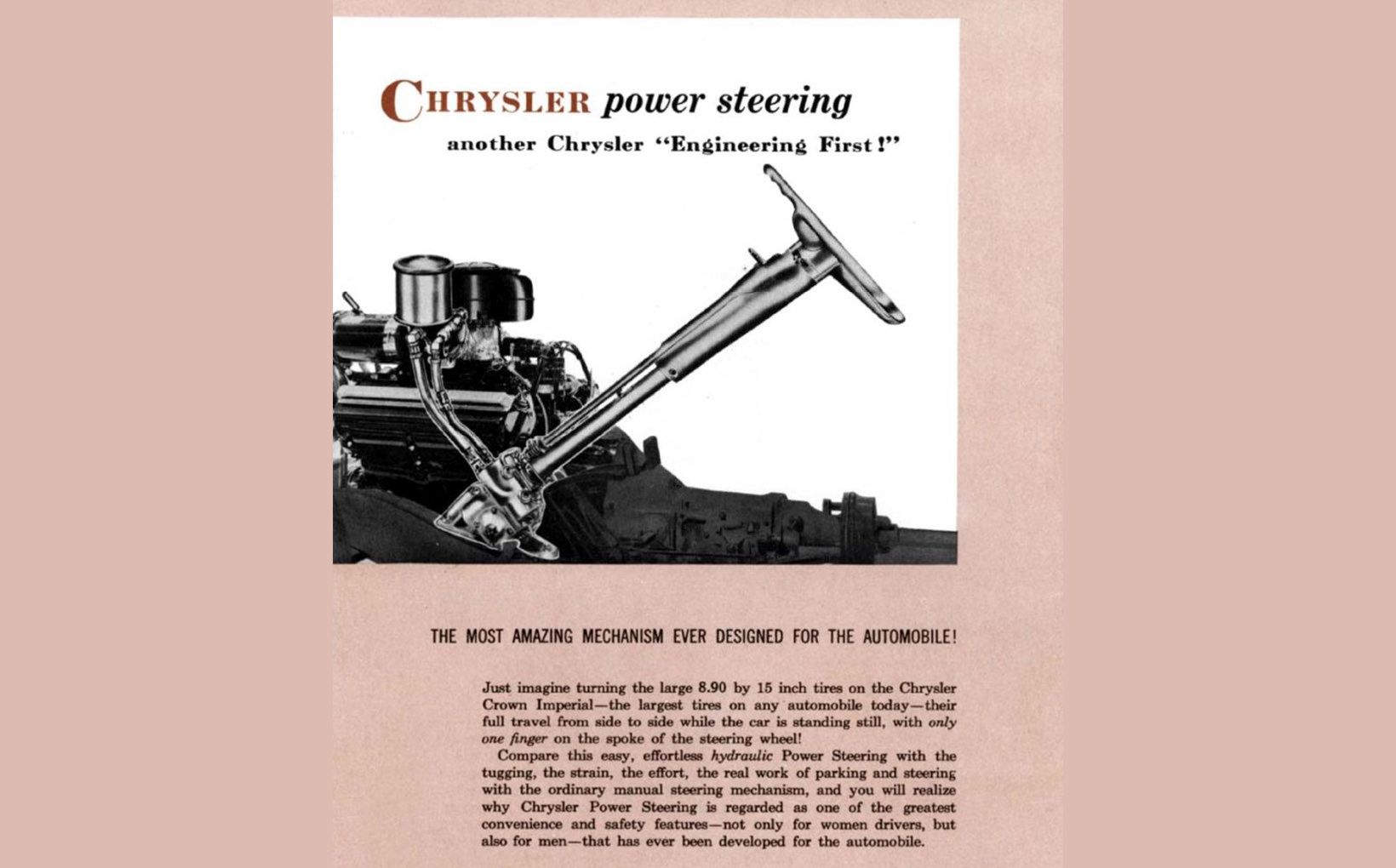 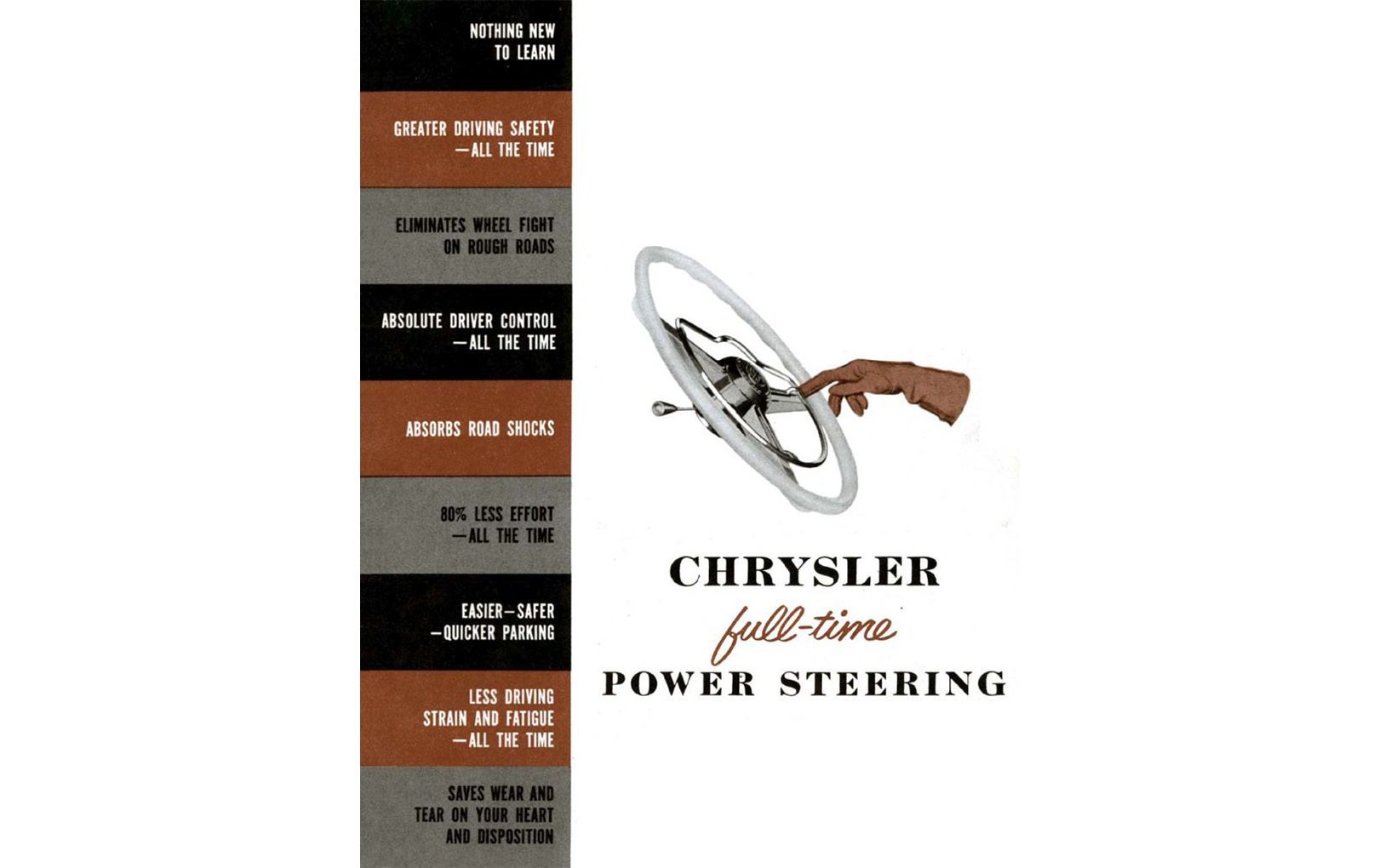 Chrysler offered power steering in 1951 on its big Imperial limousines.

A by-product of power steering has been the significant reduction in steering wheel diameter. In 1956 the usual size was 51cm. These days it is approximately 37cm.

There have been a number of attempts to replace the steering wheel.

During the 1950s, the decade of the dream cars, Ford and GM showcased car after car that predicted the end of the wheel and the arrival of…..well, something else.

The Atmos featured twin hand grips. The Mystere had controls similar to a small airplane, with a centre mounted yoke that could switched from left to right hand drive in about ten seconds. The La Galaxie presented the driver with chrome plated rectangular hand grip arrangement. 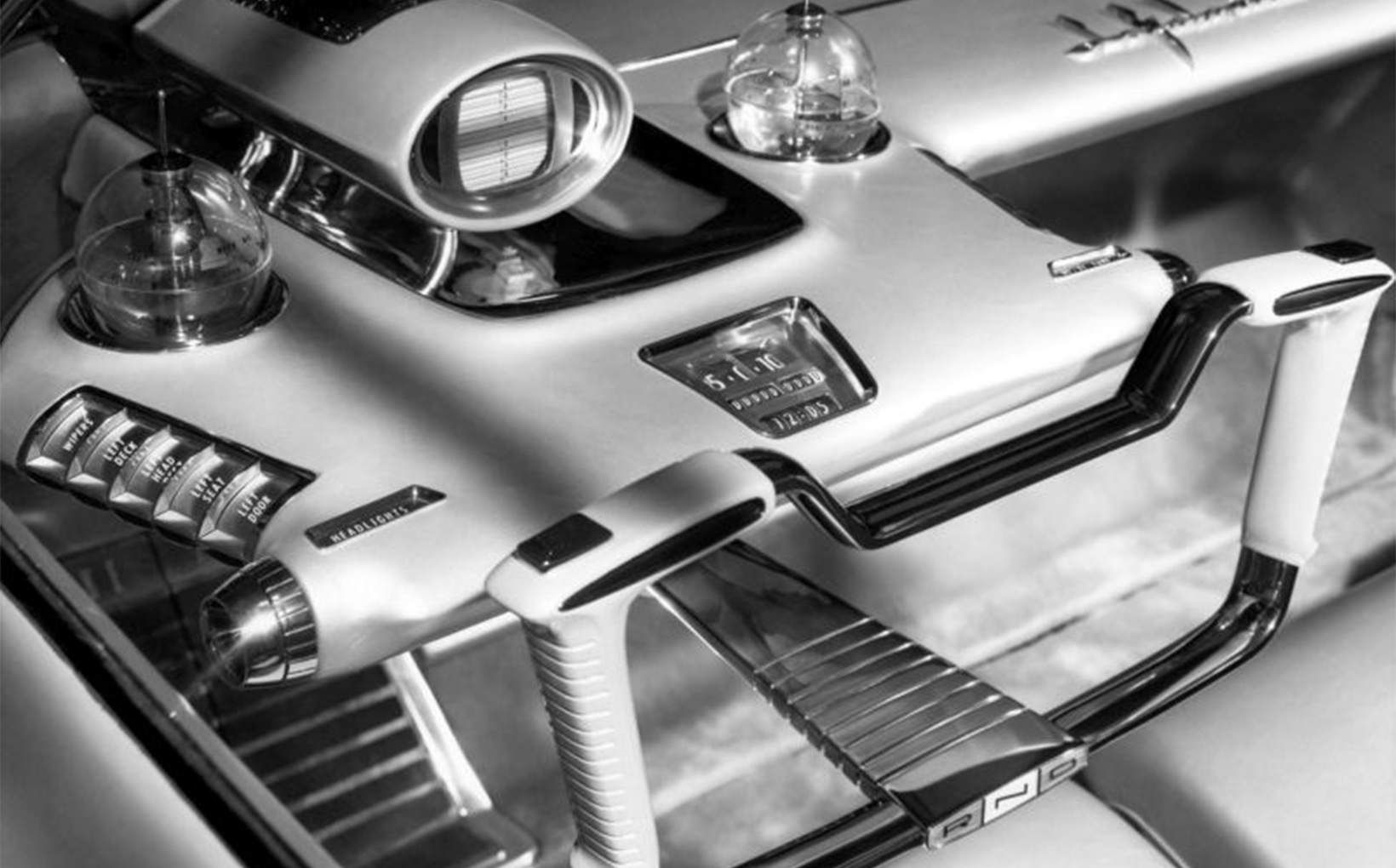 The 1958 Ford LaGalaxie dream car featured this hand grip steering device. It was all for show. The car was a “push mobile” and had no steering gear. (Image copyright Ford Media 2020)

Ford is best known for its “wrist twister “concept from 1965.

It was designed by Bob Rumpf and fitted to a Mercury Park Lane convertible, which, as the name implies, is an automobile as wide and as long as the London thoroughfare.

Ford hired Bob because he knew nothing about cars. His expertise was engineering missiles and space craft. They wanted him to think outside the box.

And he went way outside. 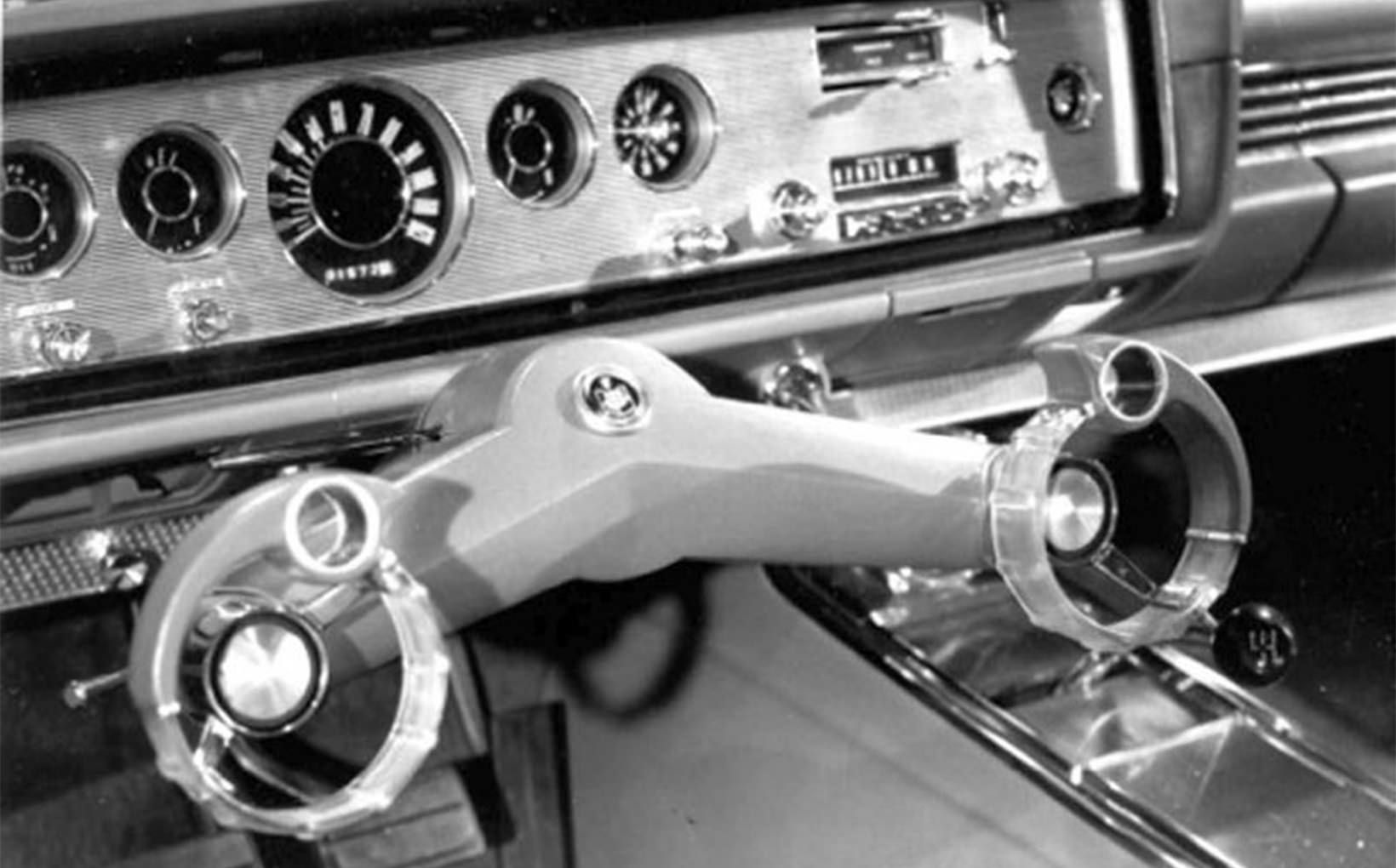 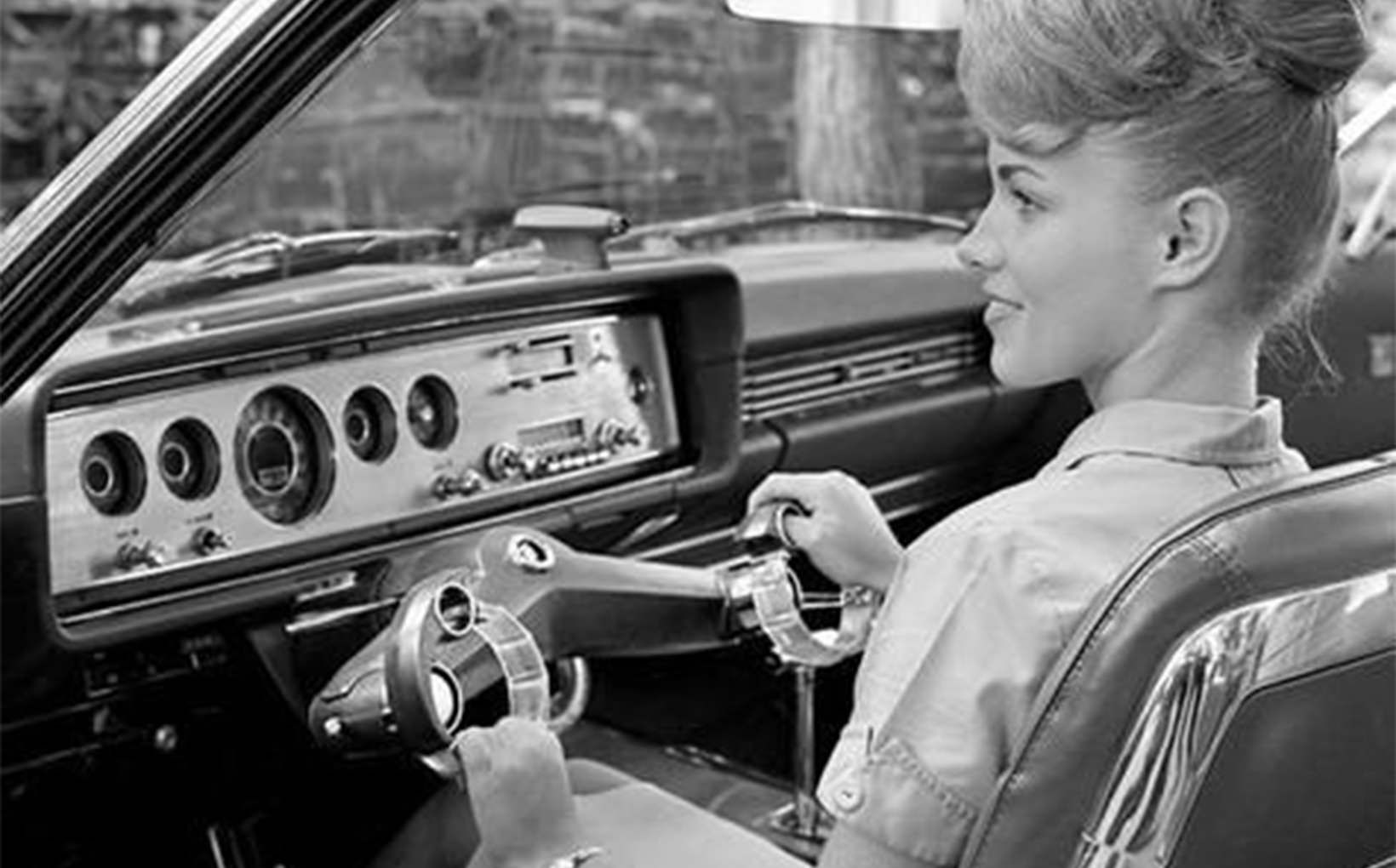 Ford’s wrist twist idea gained considerable attention in 1965. It was installed on a small number of cars, the most photographed being a Mercury Parklane convertible. (Image copyright Ford Media 2020)

These were connected through a central hub to the steering shaft by small mesh chains.

Drivers gripped the dials and steered. The thumb holes provided leverage. Power assistance did the rest.

Ford made a film of the wrist twist. Once you overcome the blatant sexism of the voiceover the idea has some merit. Here is a LINK.

Ford was never able to solve the problem of what happened if the power steering failed. How could anyone safely steer a car with those tiny wrist twisters?

GM’s four Firebird dream cars all had an alternative to the wheel. 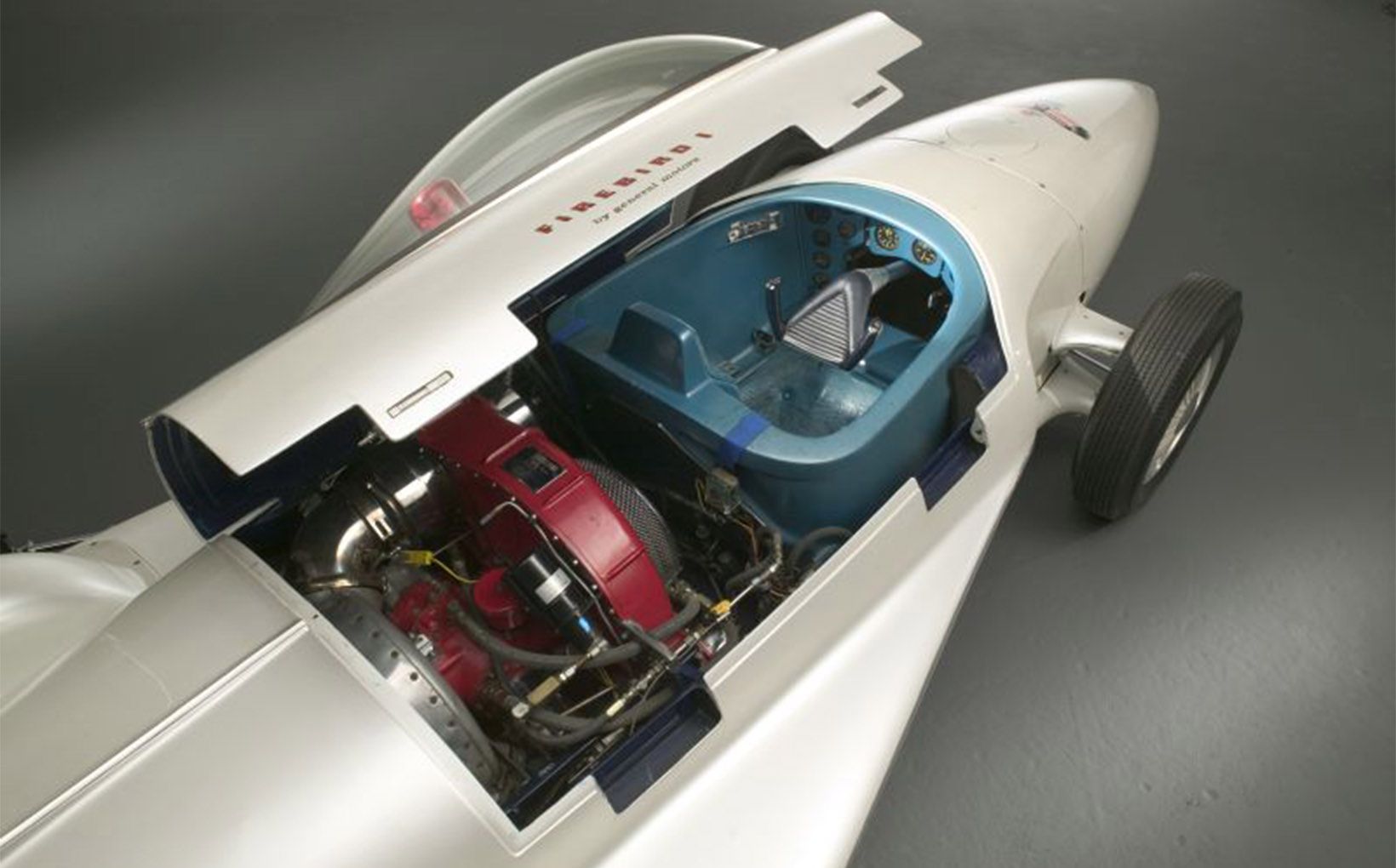 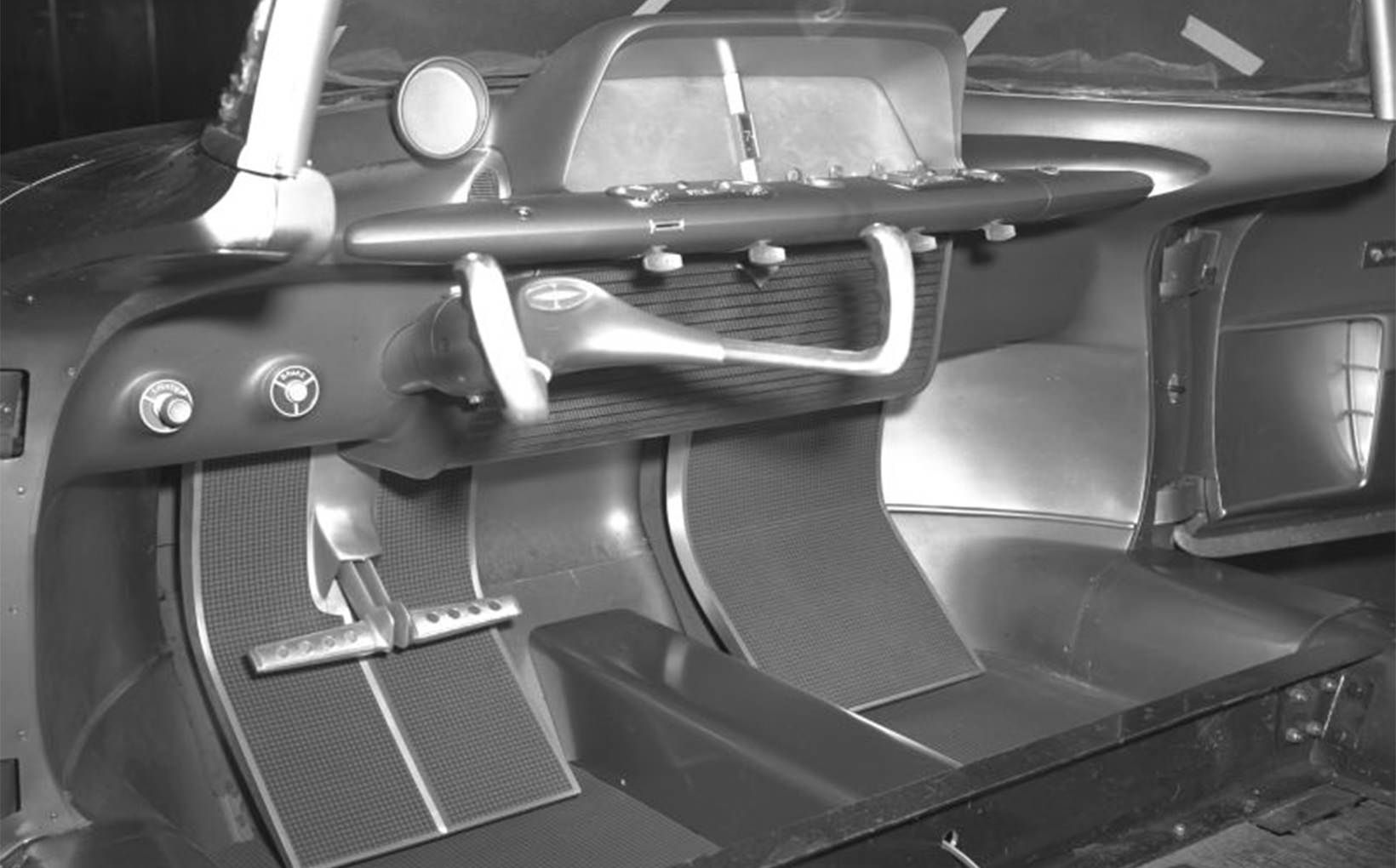 GM’s Firebird I, which was fully operational, and driven at speeds up to 160kmph, had hand grips. The non-operable Firebird II show car also had hand grips. Its operating twin had a conventional wheel. (Image copyright GM Media 2020)

More recently, GM showed its 2002 Hy-Wire, with hand grips that could slide across the car, making it either left or right hand drive. Just like the Ford Mystere. 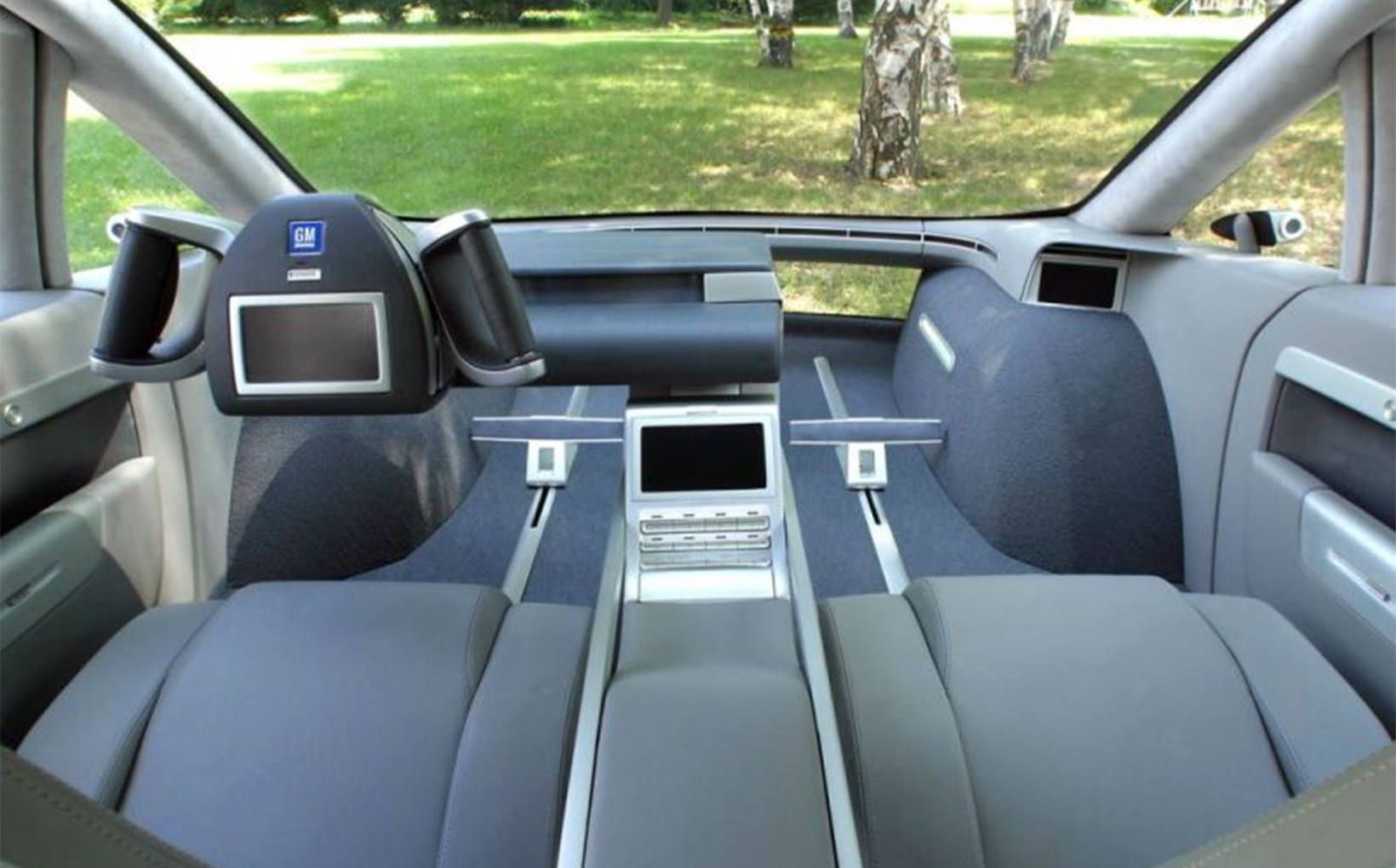 In 2002 GM unveiled its Hy-Wire concept. It had a movable steering set up that allowed it to be configured for either left or right hand drive in under a minute. (Image copyright GM Media 2020)

Chrysler, Toyota, Saab, Mercedes and Honda have also experimented with some form of non-wheel.

In 1966 Chrysler had hand grip, wrist twist, hydro-electric steering in its 300X concept car. Problem was, that when the car was to be shown to the media on a golf course in Palm Springs the steering malfunctioned and it could only be driven through right hand turns. 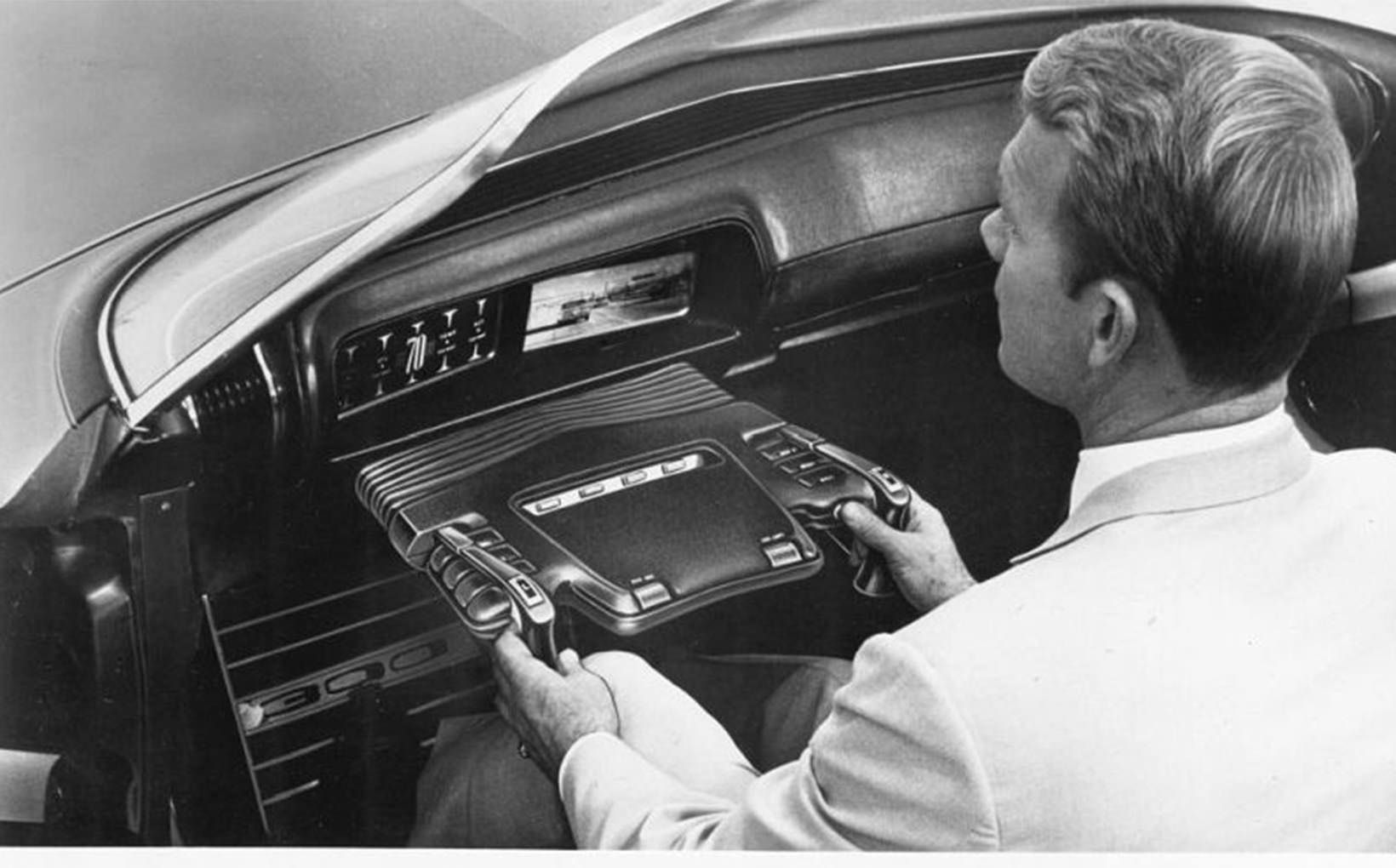 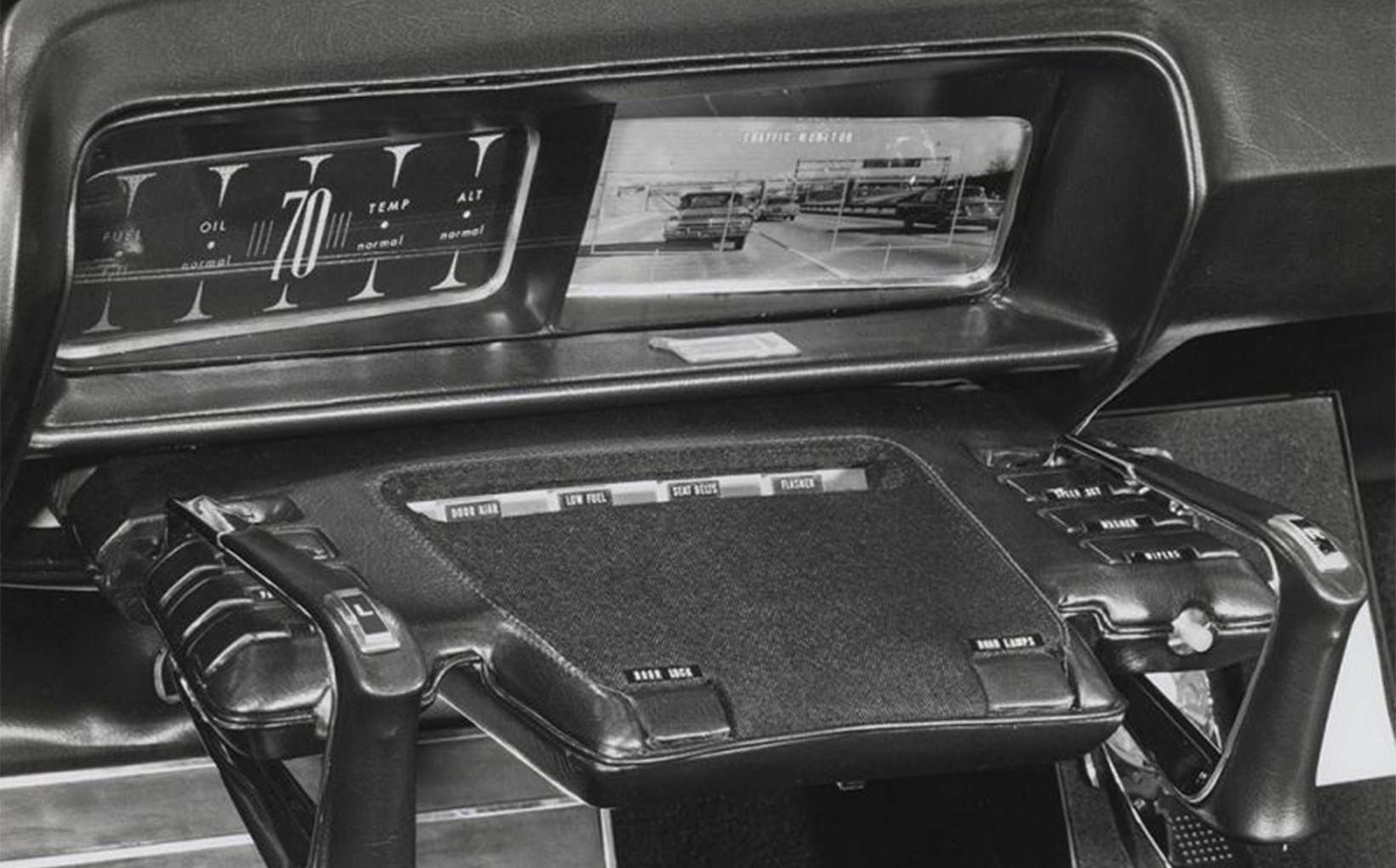 Toyota’s 2009 FT-EV II electric concept car used a drive-by-wire mechanism. It featured a yoke and handlebars for acceleration, braking and steering. This eliminated the need for foot pedals. 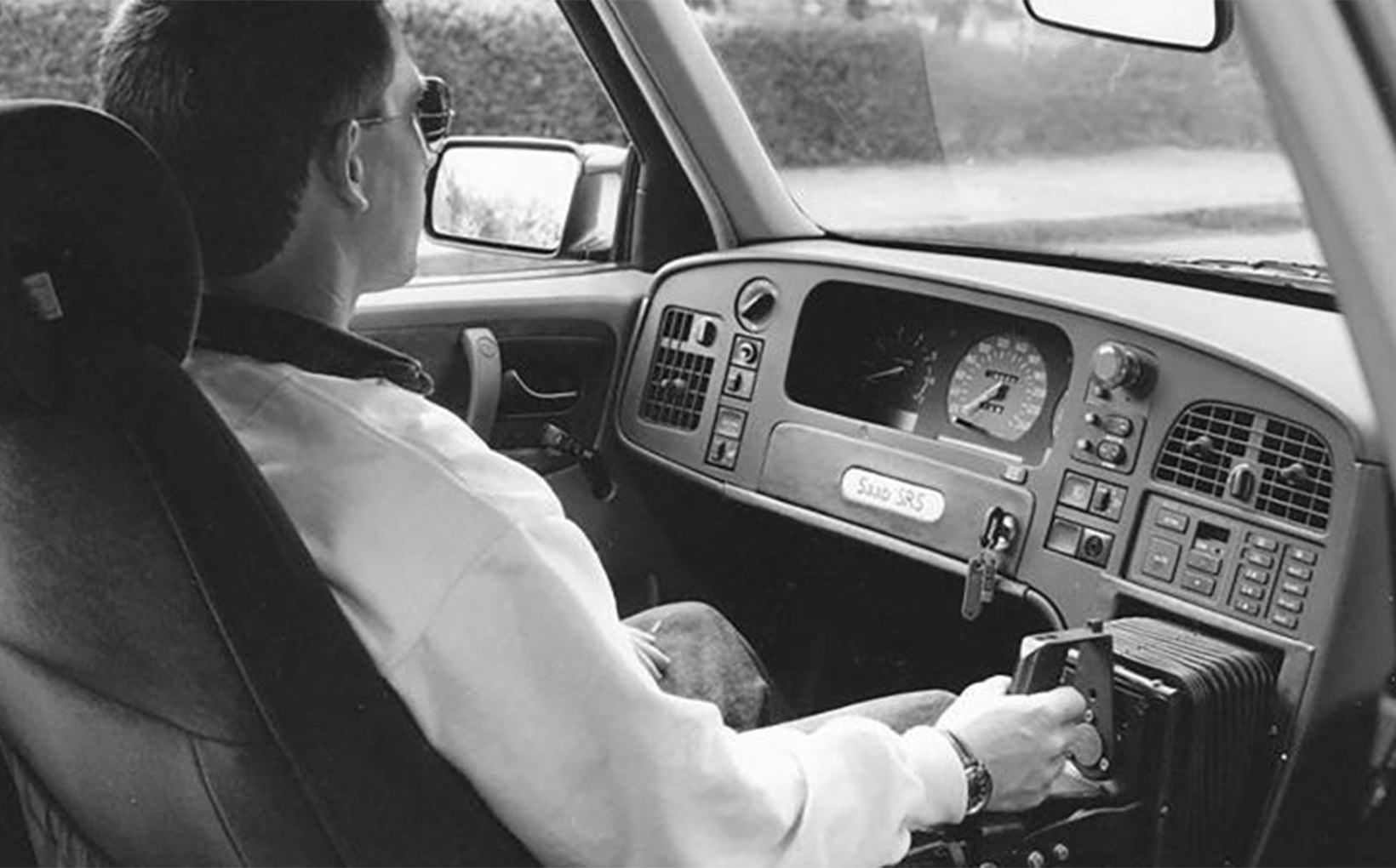 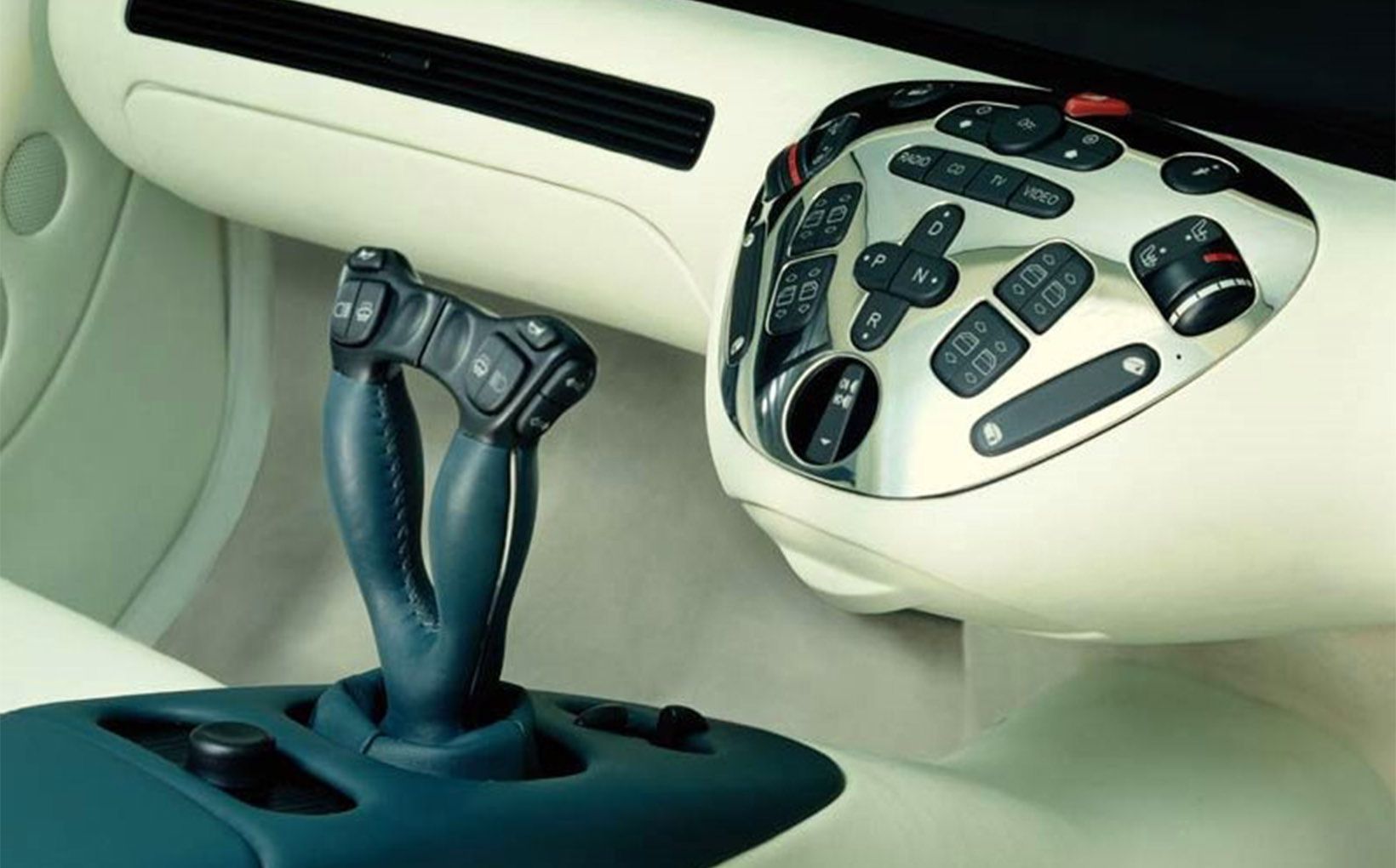 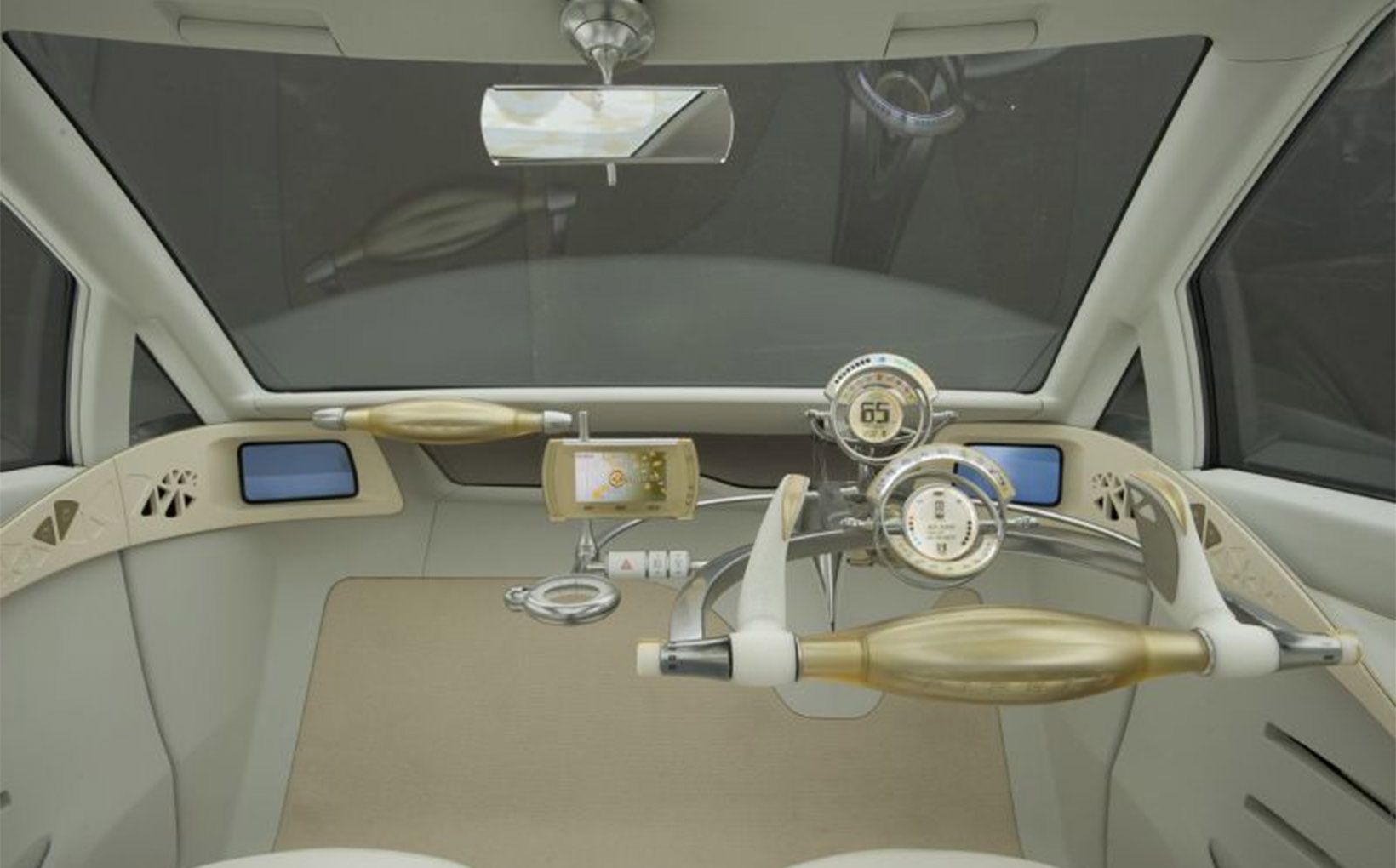 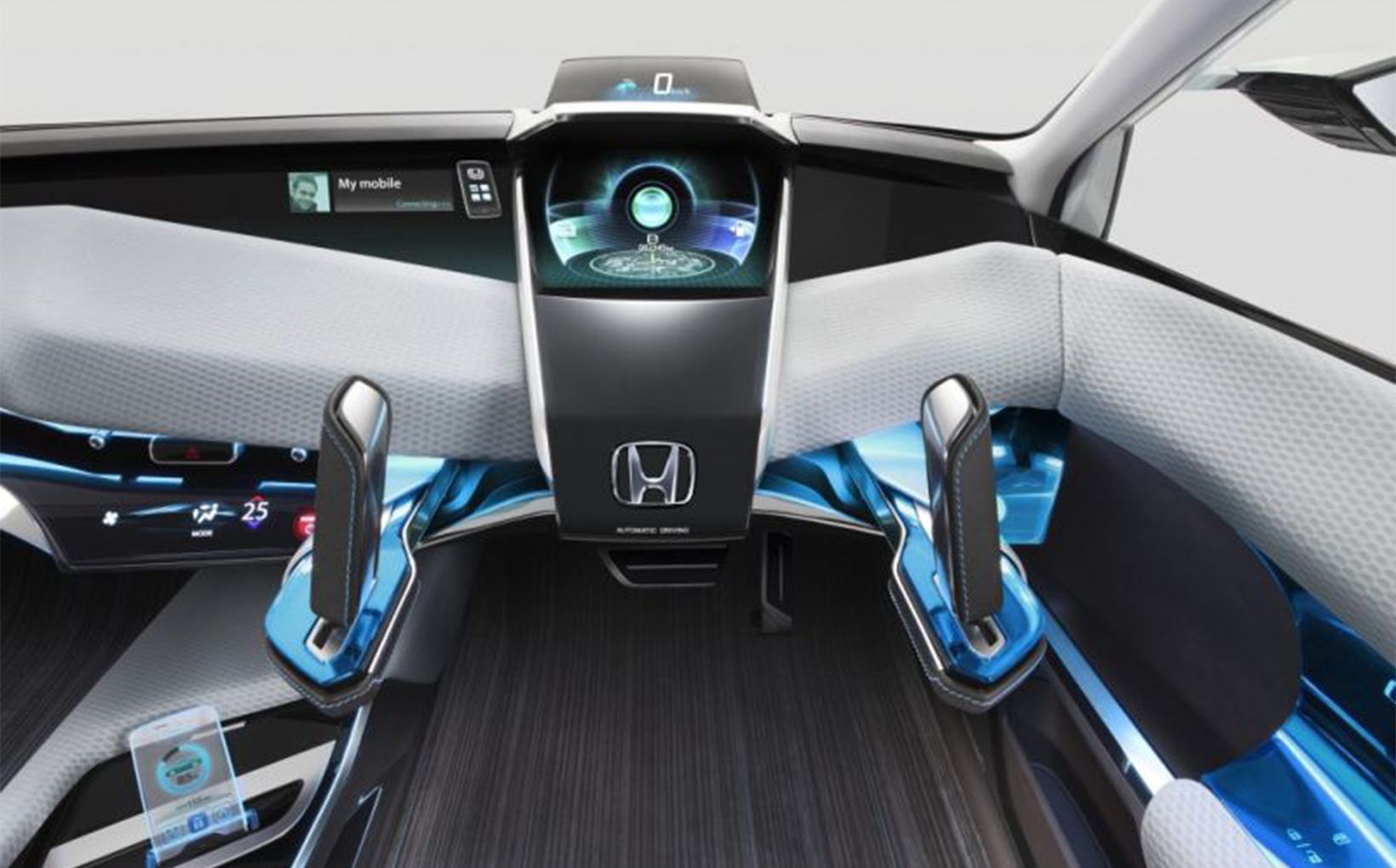 In 1992 Saab show off its Prometheus ideas car, with its centre located joystick. Mercedes followed in 1996 with a similar idea that allowed steering from the left or right front seats. Toyota’s 2009 FT-EV II controls look like they were fashioned from left over steam pipes. Honda’s 2011 AC-X is more “conventional.” (Image copyright Saab AB/GM Media, AG Daimler, Toyota and Honda 2020)

Honda has showcased its handgrip technology in its Ev-Ster and AC-X concepts of 2011 and, the one I like best, its 2009 P-NUT. No kidding, that’s what they called it. 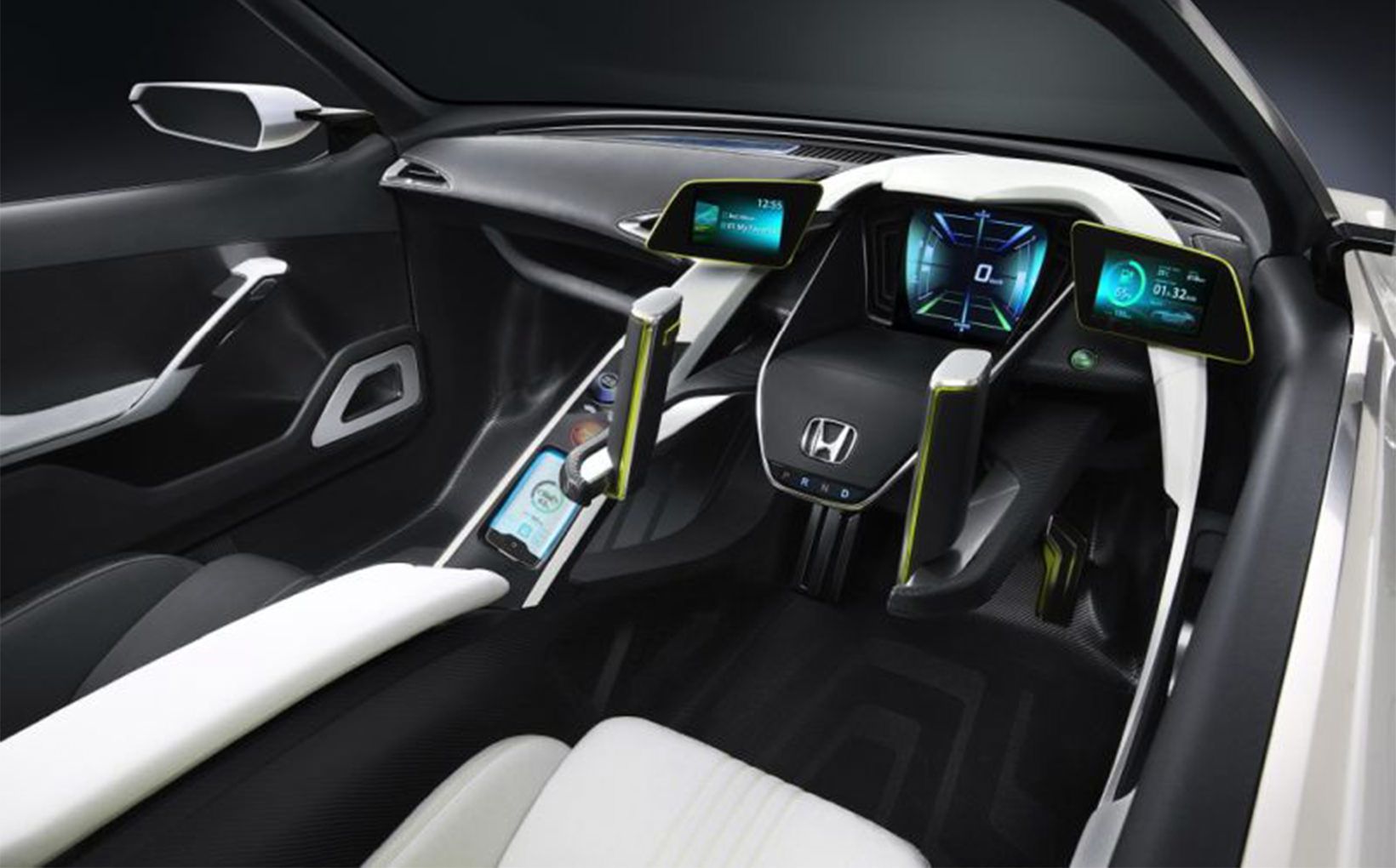 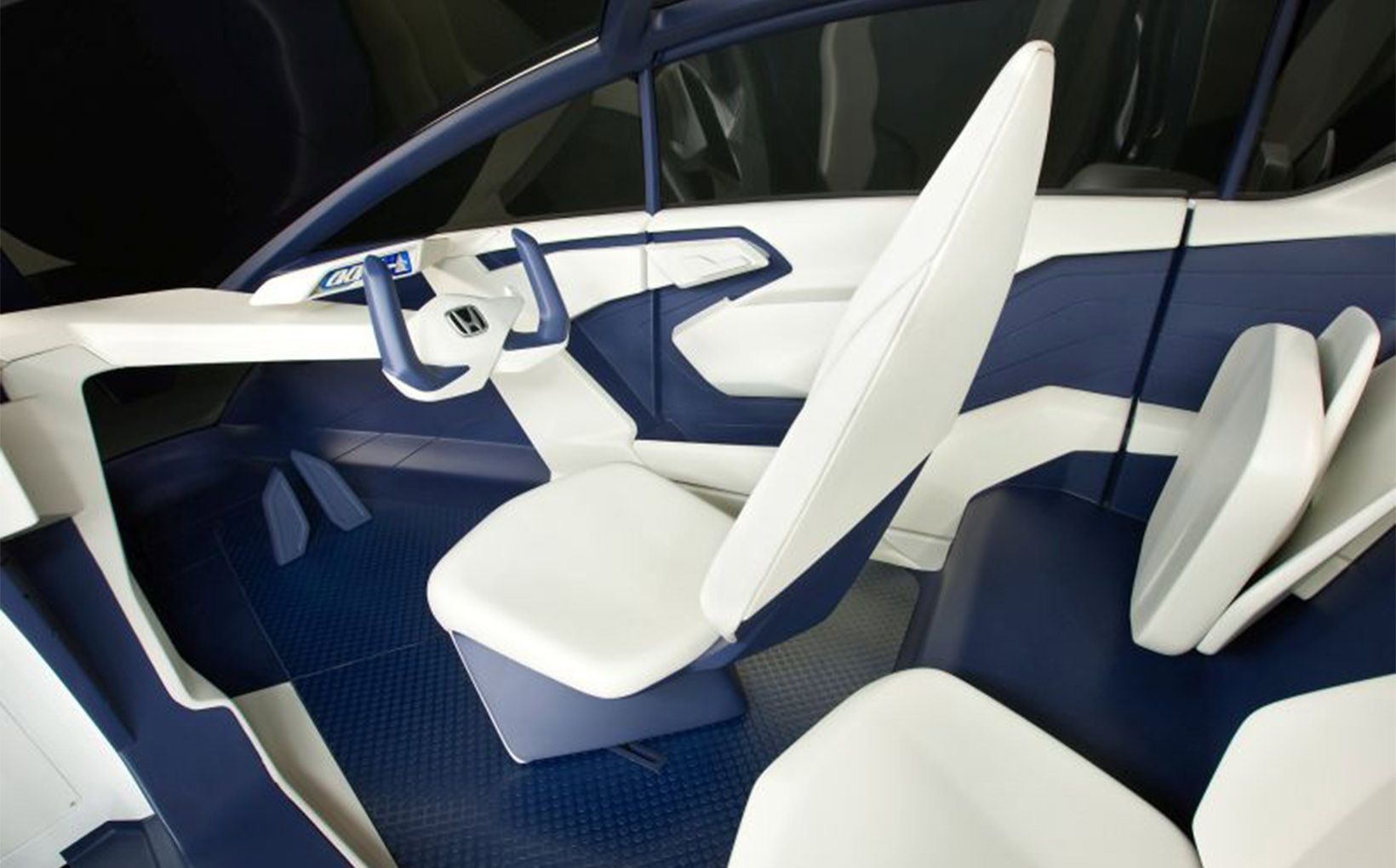 Futurists claim that autonomous cars will cause the steering wheel to lose its pride of place. But so far, after 120+ years, the circular thing in front of the driver has remained firmly in situ.