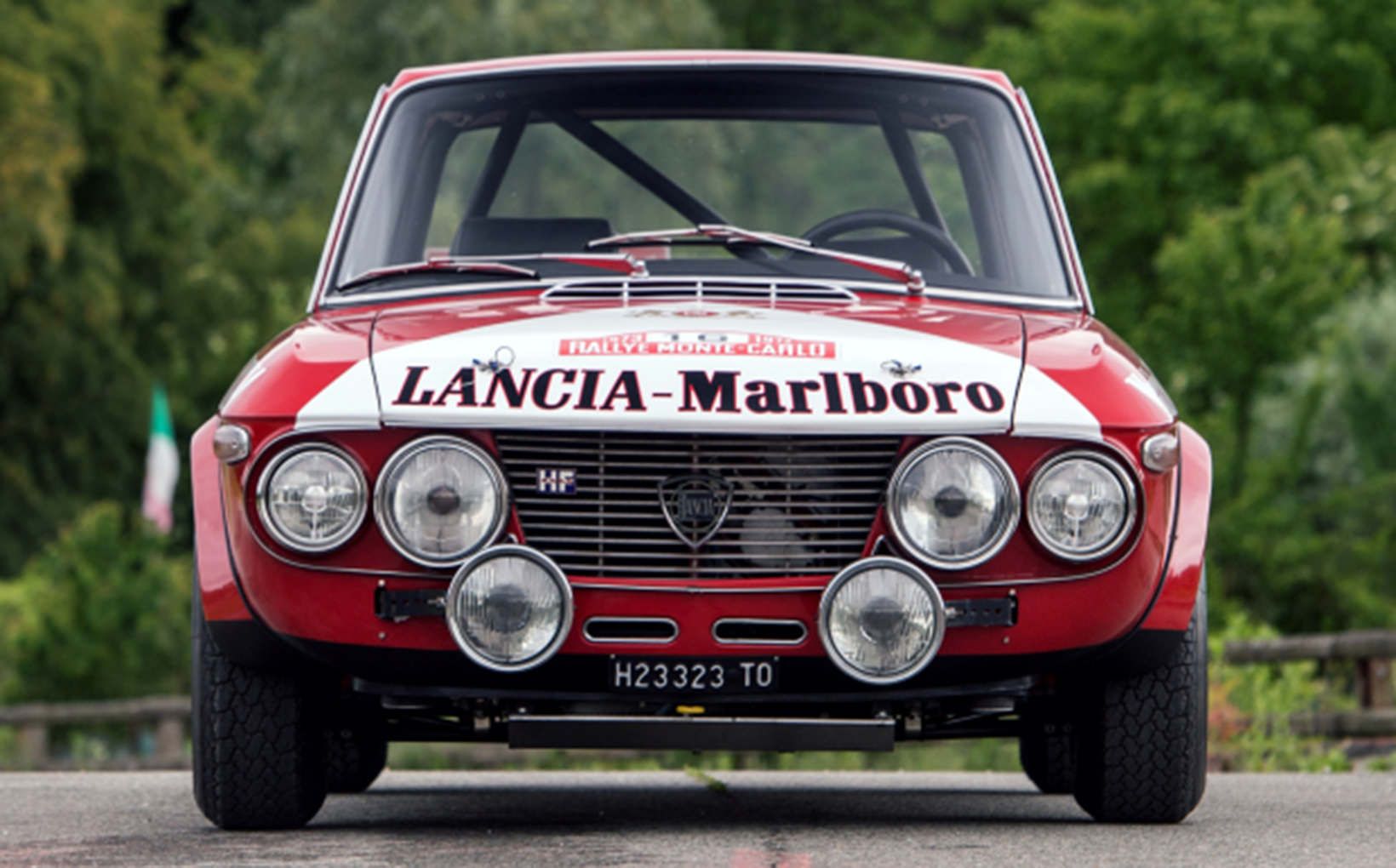 The Fulvia, produced from 1963 until 1976, had established itself as one of the all-time great Lancias well before the company was swallowed by former rival Fiat in 1969. It would be the Fulvia that would take Lancia back into motorsport, from whence it had disappeared in 1955 when Ferrari acquired its Formula One cars. (Actually, to call Fiat a ‘rival’ is to compliment the larger company. While both marques produced charismatic cars with a distinctively Italian flavour, Fiats were essentially mainstream while Lancias were priced at a level that ensured their appeal was to the automotive cognoscenti.) 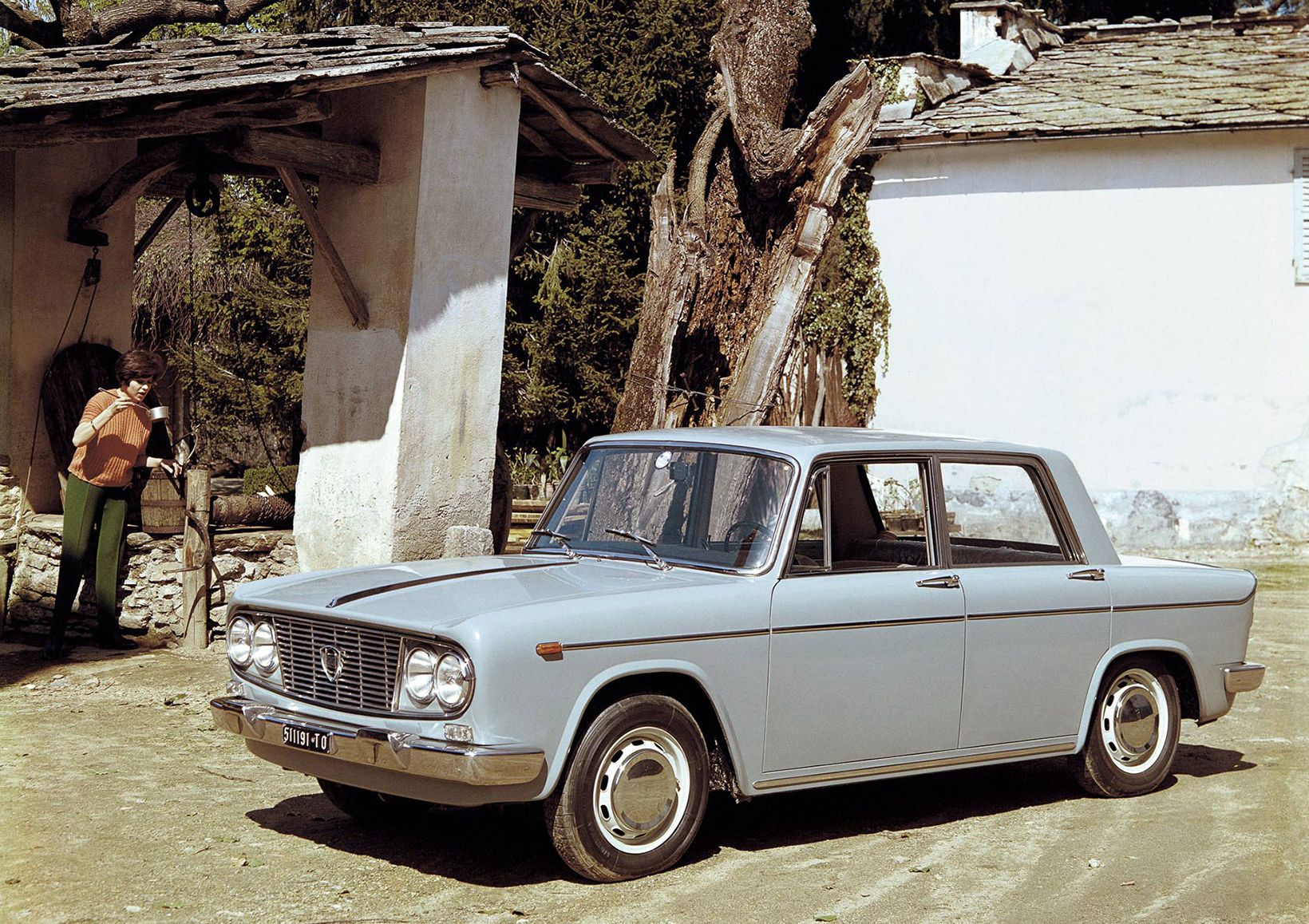 The original Fulvia berlina, which made its debut at the 1963 Geneva Salon and was named (from the Latin for ‘blond one’) for the old Roman road between Tortona and Turin, struck some observers as overpriced and underpowered. Despite its 1091cc V4 producing 58 brake horsepower (DIN) and propelling it to a top speed of 138km/h, the Fulvia could not keep pace with a contemporaneous Fiat 1100 in a traffic light drag race; only at higher speeds did the boxy little newcomer came into its own. One critic famously described it as having three bottom gears and one top (and even fourth was pretty low, giving just 14.7 miles per hour per 1000rpm). When you realise that a Fiat 1100 was just half the price, it is easy to see how the Fulvia required of its prospective buyer quite a leap of faith!

Four on the tree was the fashion in Italy from the end of the war through to the early 1960s. The Fiat 1100 and the 1300/1500 of 1961, as well as the earliest examples of the Alfa 105-Series Giulia sedan were thus equipped, permitting a front bench seat for the carriage of three occupants. 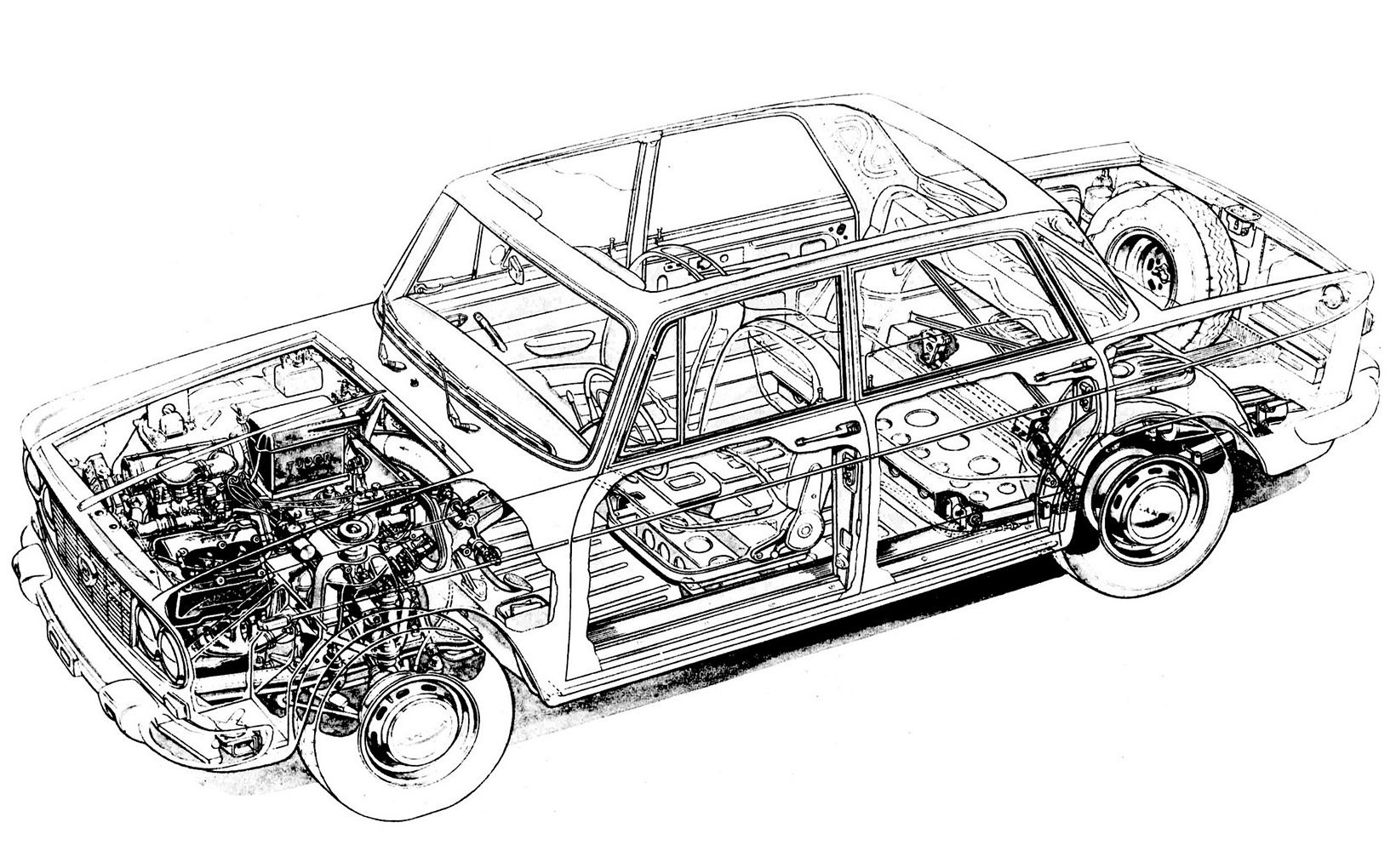 The Fulvia’s V4 engine was a minor masterpiece. But it really needed an increase in capacity and an extra carburettor to deliver an appropriate level of performance to match the car’s superb dynamics. Image: https://en.wheelsage.org/

The engine was a gem. This narrow-angle dual camshaft V4 – a radical proposition in itself – used alloy for its crankcase and cylinder heads and was canted 45 degrees from the vertical and six degrees downwards towards the rear. It was equipped with a single dual-choke Solex carburettor. 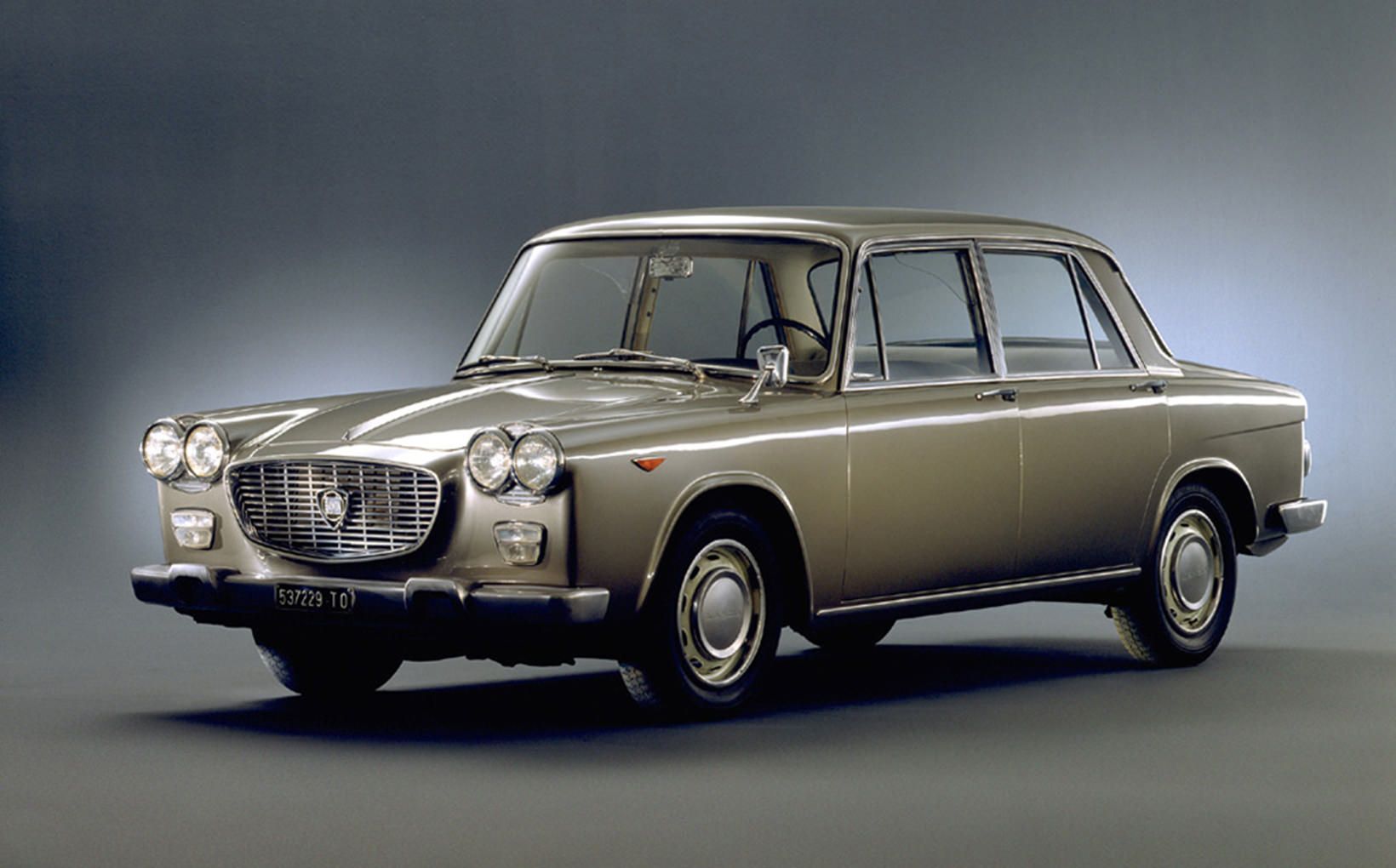 In 1960, the Lancia Flavia was a simply outstanding luxury sports sedan. Image: https://en.wheelsage.org/

The Fulvia was largely based on the medium-sized Flavia, which had been introduced in 1960. The Flavia indulged designer Dr Antonio Fessia’s love of front-wheel-drive and the Fulvia followed suit. Even as late as 1963, this configuration was judged to be unorthodox, and probably especially so in Italy. Fessia’s opinion was that to avoid wheelspin and axle tramp under adverse conditions, at least 63 per cent of a car’s weight should sit over the front wheels. For the Flavia, he cantilevered the engine forward of the axle line with the transmission behind.

Within a year of its debut, the Fulvia acquired a more powerful engine. There would never again be a Fulvia with just one carburettor. The new 2C (twin-carburettor) version of the 1091cc engine produced 71 horsepower. Acceleration was much improved as was fuel economy, while top speed climbed to 144km/h. This level of performance from such a small engine was remarkable in 1964 and in its December edition, the Autocar tester observed:

The Fulvia – but particularly the new 2C – is a car an owner would come to like very well…Such adjectives as ‘taut’, ‘chic’ and ‘brisk’ characterise the smallest Lancia. 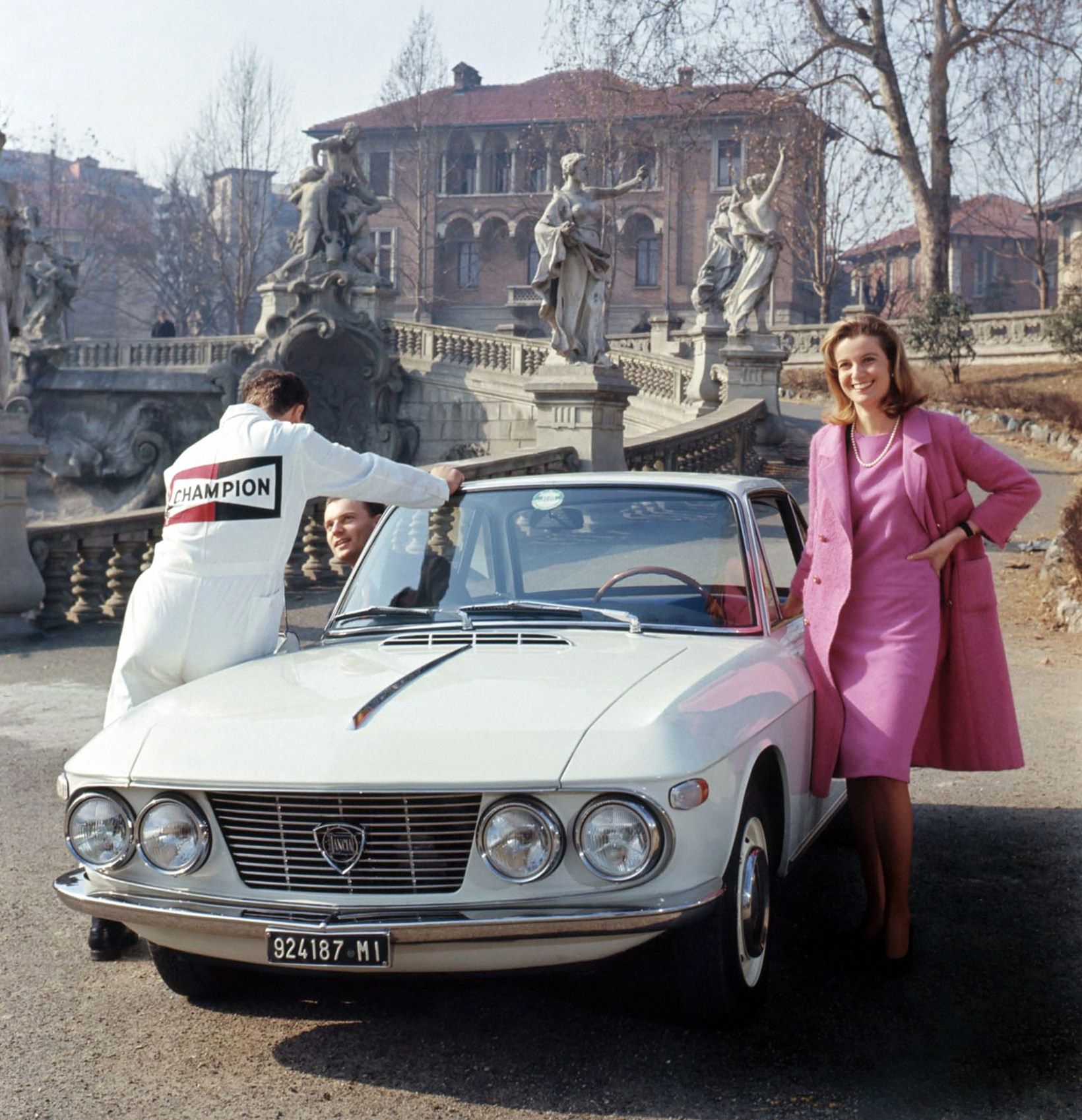 The delicate beauty of the Fulvia coupe has stood the test of time. Image: https://en.wheelsage.org/

Even more exciting news followed in 1965 with the announcement of the gorgeous Fulvia coupe, said by its designer (Piero Castagnero, who also did the sedan) to have been in part inspired by the Riva powerboat of the era.

Comparing the appearance of the coupe with the sedan was instructive, because there was nothing especially striking about the four-door Fulvia. When Fiat launched its 124 Sport a couple of years later, it bore a similar relation to the berlina with which it shared its model identification; boxy sedan, rakish coupe! 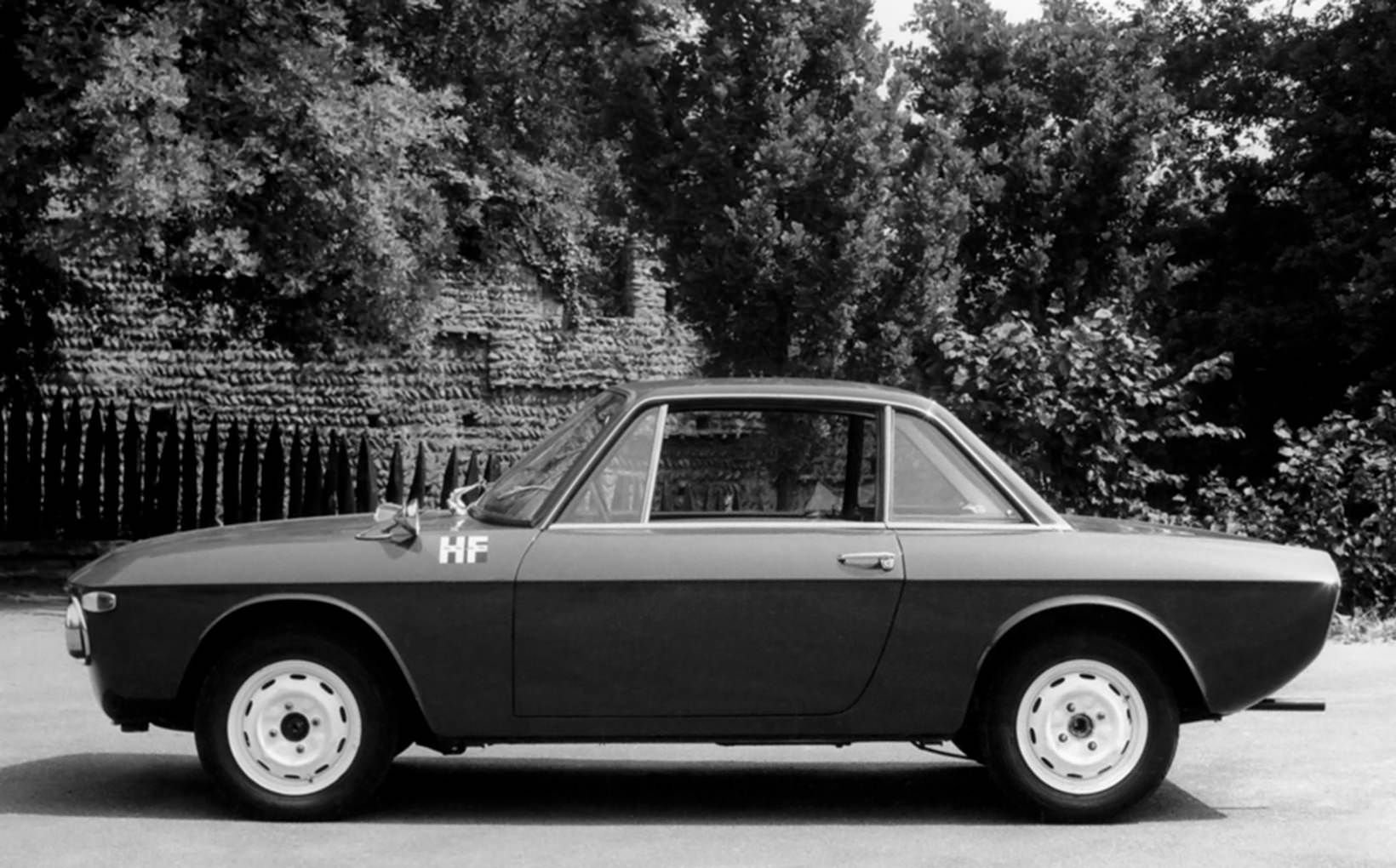 The Fulvia 1.3 HF (for Hi-Fidelity). Eighty-eight brake horsepower was pretty good from 1.3 litres in 1967!  Image: https://en.wheelsage.org/

The combination of good power, front-wheel-drive and light weight encouraged some enthusiasts to take their Fulvias rallying and Lancia responded in 1966 with the stripped HF (Hi-Fidelity) variant, initially as a 1.2 but a 1.3 the next year. Weight was reduced from the standard coupe’s 960kg to a remarkably light 825 through the use of alloy panels and Plexiglass side windows, as well as the deletion of bumpers and most of the interior trim. The HF was named for an amateur rally team which used Lancias and this introduction of a stripped-out production version was many years ahead of the fashion later led by Porsche.

The Fulvia 2C berlina was seen in 1965 events but was soon supplanted by the coupe.

By 1967, Lancia management was so convinced of the merits of its Fulvia range that it made a renewed push in the US market. In its September edition of that year, Road & Track said:

Like Maserati, Lancia is a fine old Italian marque that has been pretty much dormant here in America for several years. When John Bond first published his list of the world's seven best-made automobiles in 1961 he included Lancia; this year he left it out, not because he felt the quality had declined but rather because they seemed to be just too small and modestly powered for the money. When offered a pair of the latest Fulvias for road testing, the staff of R&T felt pretty much the same about them. But we like to think we have open minds and with the importers (Trident Motors, Rosemont, Pa.) so eager for us to try them that they'd airmail them to us in California we happily accepted a chance to try these unusual cars. 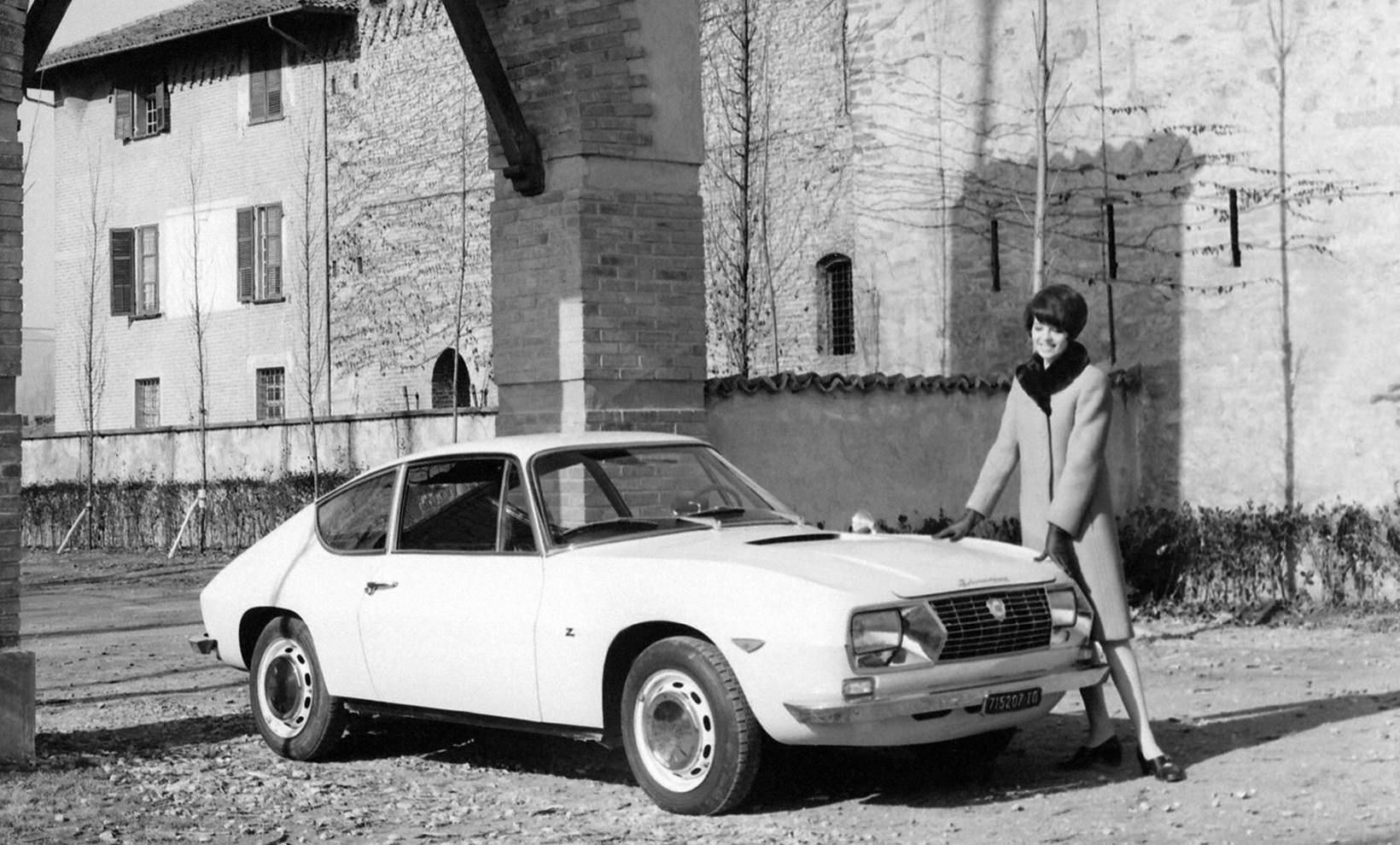 The magazine tested two newly released versions, the Rallye coupe and the Zagato:

The Rallye covered the standing quarter-mile in 18.6 seconds, half a second quicker than the Zagato. The difference was down to gearing. But the slightly lighter and notably more aerodynamic Zagato reached 109 miles per hour, five faster than the Rallye. This Zagato Sport variant was launched in 1965 and the first 911 examples had all their panels, except for the rear window surround and spare wheel hatch, in peralluman (an aluminium/magnesium alloy). Later cars had steel panels which surprisingly added just 25kg to the mass.

Back to Road & Track, it was the dynamics of these Fulvias that drew the testers’ strongest praise:

These Lancias are the best handling FWD cars we've ever driven and that's saying something.

Word is about that these Lancias are also very reliable and long of life. That we can neither confirm nor deny, but the impression from driving them would seem to confirm it. They are both absolutely delightful cars to drive. Though they certainly don't offer the most on a cu ft/dollar basis, they more than make it up in mechanical values. The Rallye coupe is a car for anyone who wants a precision motorcar, an engineering tour de force for less than $4000; and the Zagato adds a styling tour de force in aluminum to the package for a price. 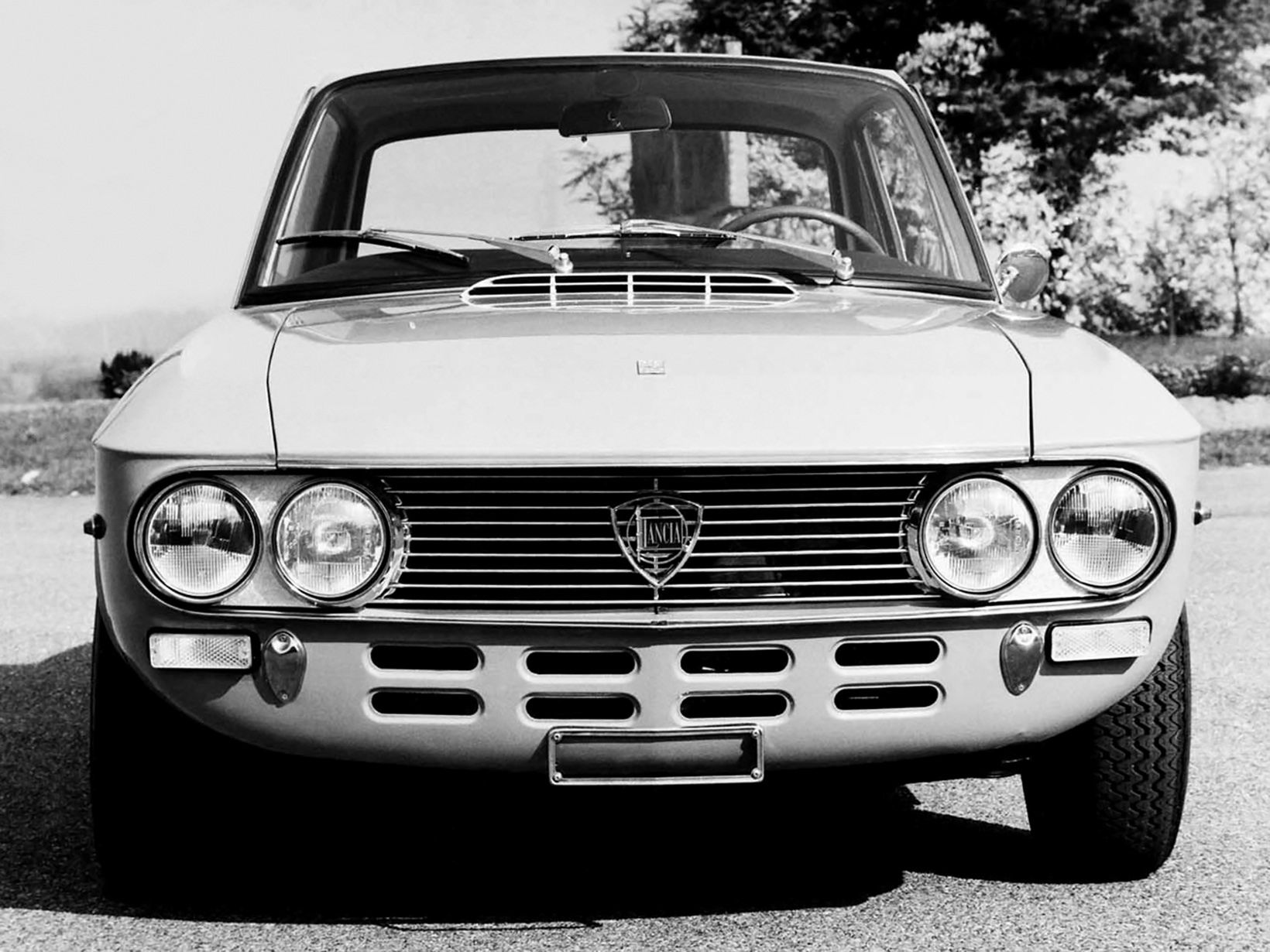 The Fulvia HFs beat Porsche to the idea of the stripped-down Club Sport type car by many years. Image: https://en.wheelsage.org/

Remarkably, given Lancia’s reputation for innovative and advanced engineering, all Fulvias made do with a four-speed gearbox for the first few years (although there was an unpopular experiment in the rally cars with a two-lever seven-speed gearbox!). But the sensational 1.6 Rallye HF of 1968 not only solved this problem by fitting a Flavia-type gearbox direct drive fifth, but in addition to the most welcome additional capacity, boasted even larger valves and an output of 120 brake horsepower. 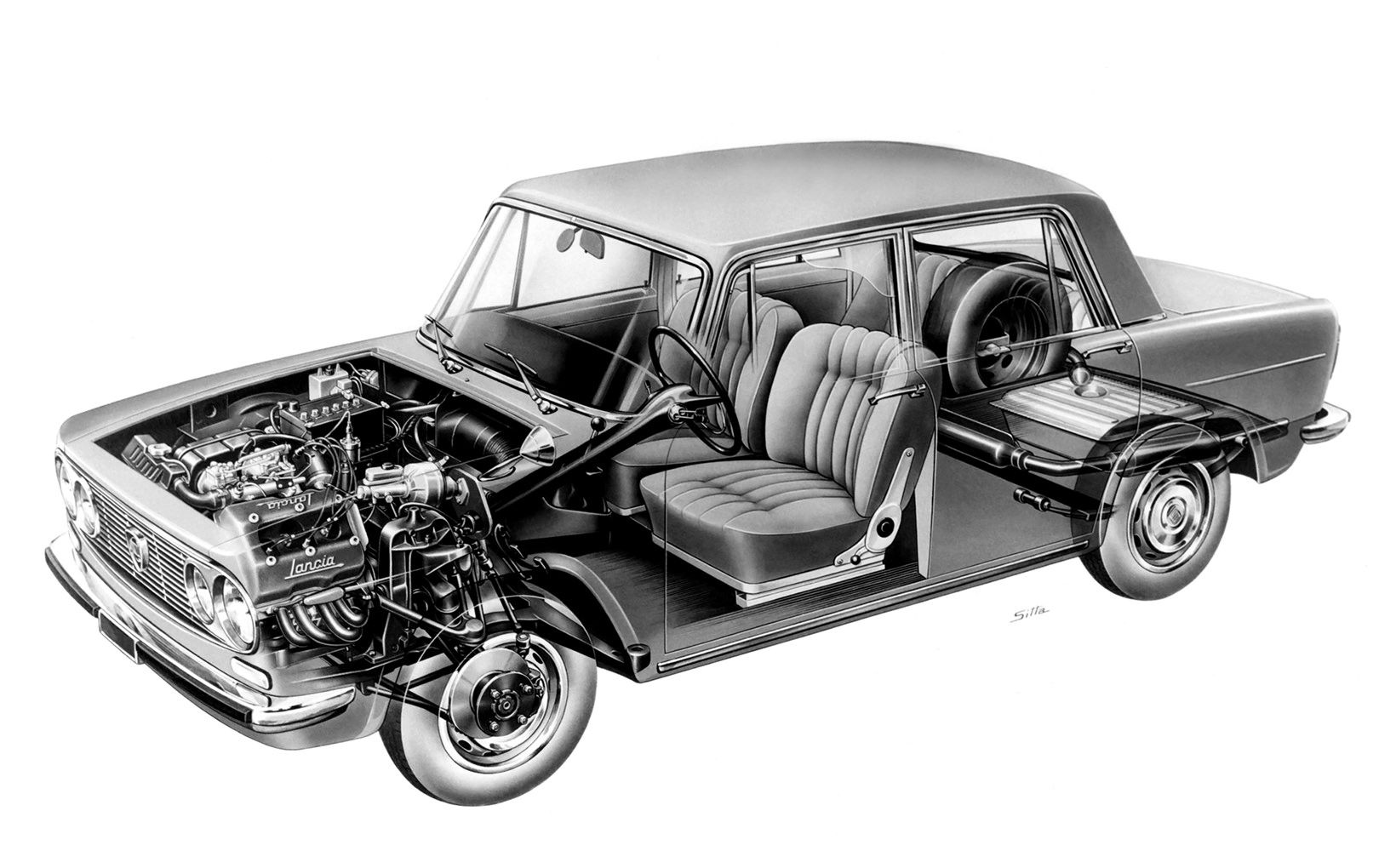 The second series coupes, introduced in 1970, all got the five-speed unit. The updated berlinas (1969) persisted with the old four-speed. Revised styling on a longer wheelbase made the new cars immediately distinguishable from their somewhat lumpy predecessors. In 1970 the five-speed gearbox was also used in the sedans.

The Fiat takeover in 1969 effectively spelt the beginning of the end for traditional Lancias. The revamped Fulvia sedans and the lovely Zagato Sport soldiered on until 1972, while the coupes lingered until 1976, selling alongside the Fiat-engined 1.6- and 1.8-litre Betas.

Undoubtedly, the hero car of the Fulvia range is the Rallye HF 1.6, which brought Lancia some of its greatest motorsport successes, building on the results achieved by the smaller capacity versions – most notable of which was the Sandro Munari/Luciano Lombardini Tour de Corse win in late 1967 (that used a 1.4 and was classified as a prototype). On 1 October 1969 the 1.6 was homologated. In short order, Harry Kallström (with co-driver Haggborn) won that year’s Spanish and RAC Rallies. The cars went on to a succession of first, second and third places until 1974. And the formidable Stratos was already competing as a prototype.

The HF was available with nine different final drive ratios to equip it for competition. Top speeds of more than 190km/h were obtained with tall gearing. 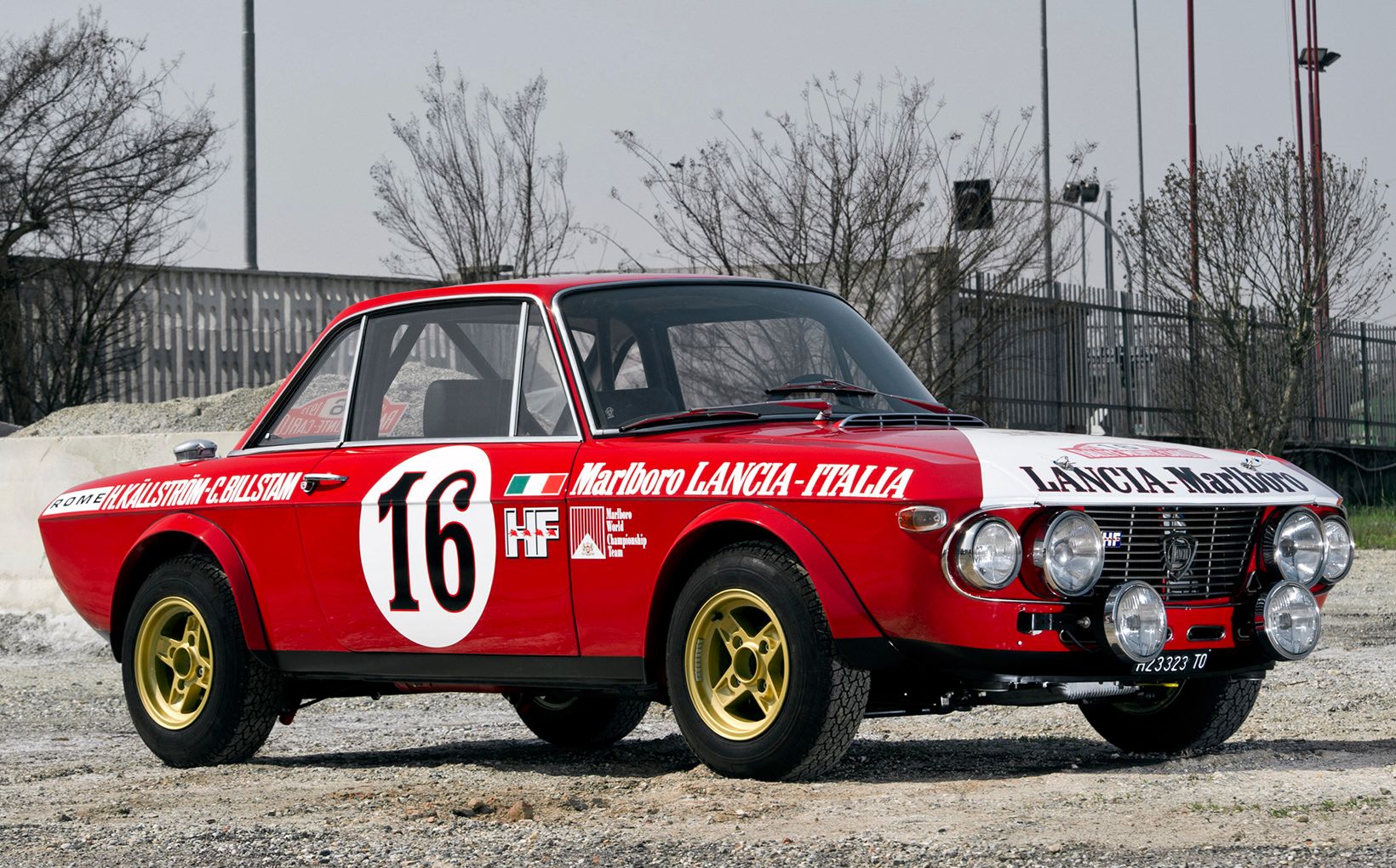 The Fulvia 1.6 HF is essentially a road-legal competition car and, arguably, the last (and among the finest) of the true Lancias. Image: https://en.wheelsage.org/

All Fulvias and especially the 1.6 Rallye HF are coveted by Lancia enthusiasts and are rarely advertised outside club circles. They epitomise everything that is best about relatively affordable Italian macchine.

Euro style in fashion at Shannons