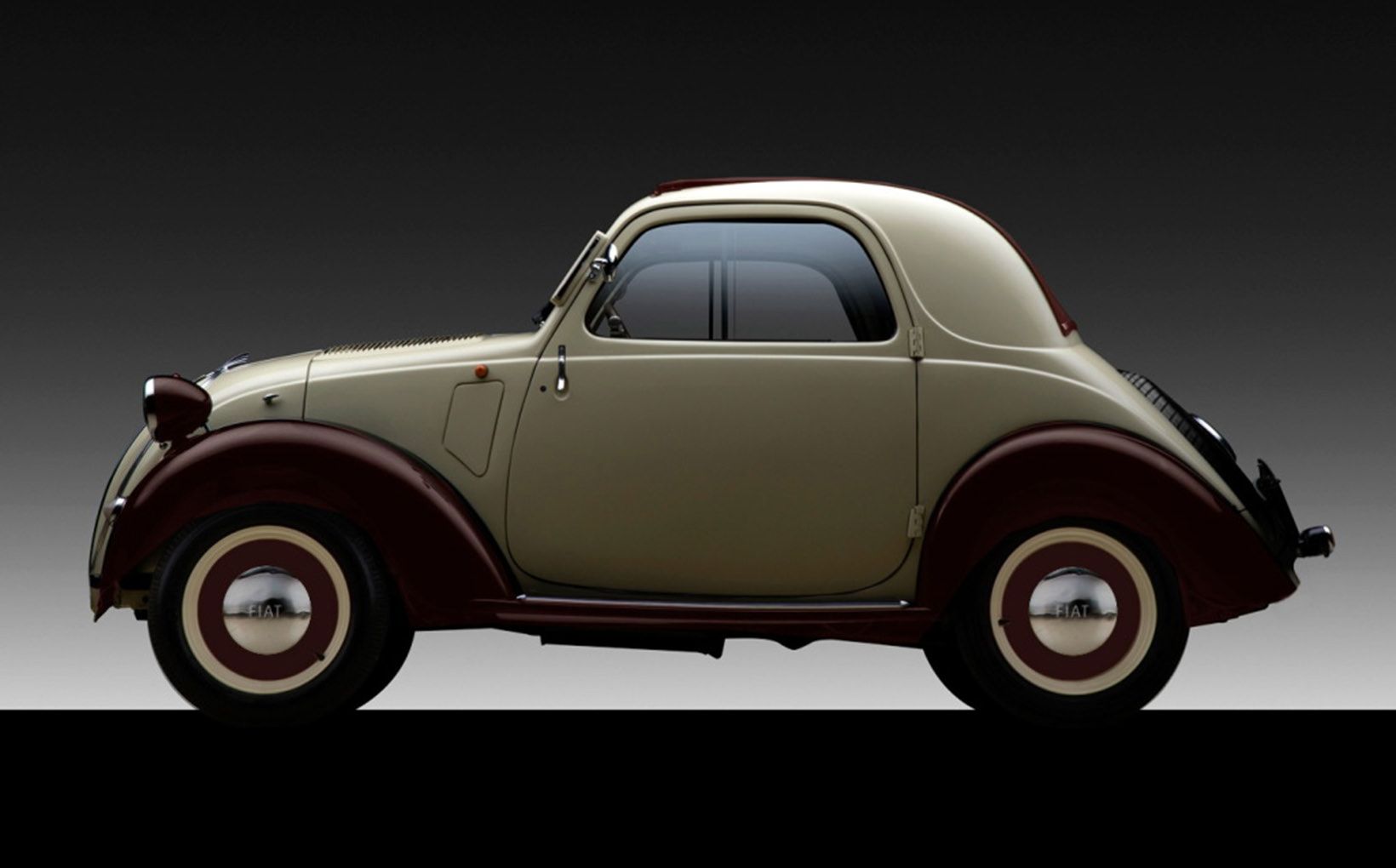 The Fiat 500 has been emblematic of the Italian automotive industry through three generations beginning in 1936. Each of the three has been unique in the small car world. Dante Giacosa’s 1936 original was affectionately nicknamed ‘Topolino’ (little mouse) but despite its compact dimensions resembled a scaled-down larger model. The Nuova 500, which was also the work of Giacosa’s fertile imagination, conformed to what would become the common pattern for small cars of packaging ‘the works’ at one end (as the BMC Mini would do in 1959). It was in many respects an even smaller, slower and cheaper version of the 600 launched in 1955. As for the current generation, which made its debut in 2007, it packages a retro character resembling the Nuova 500 in the ubiquitous contemporary idiom of front-engine/front-wheel-drive. 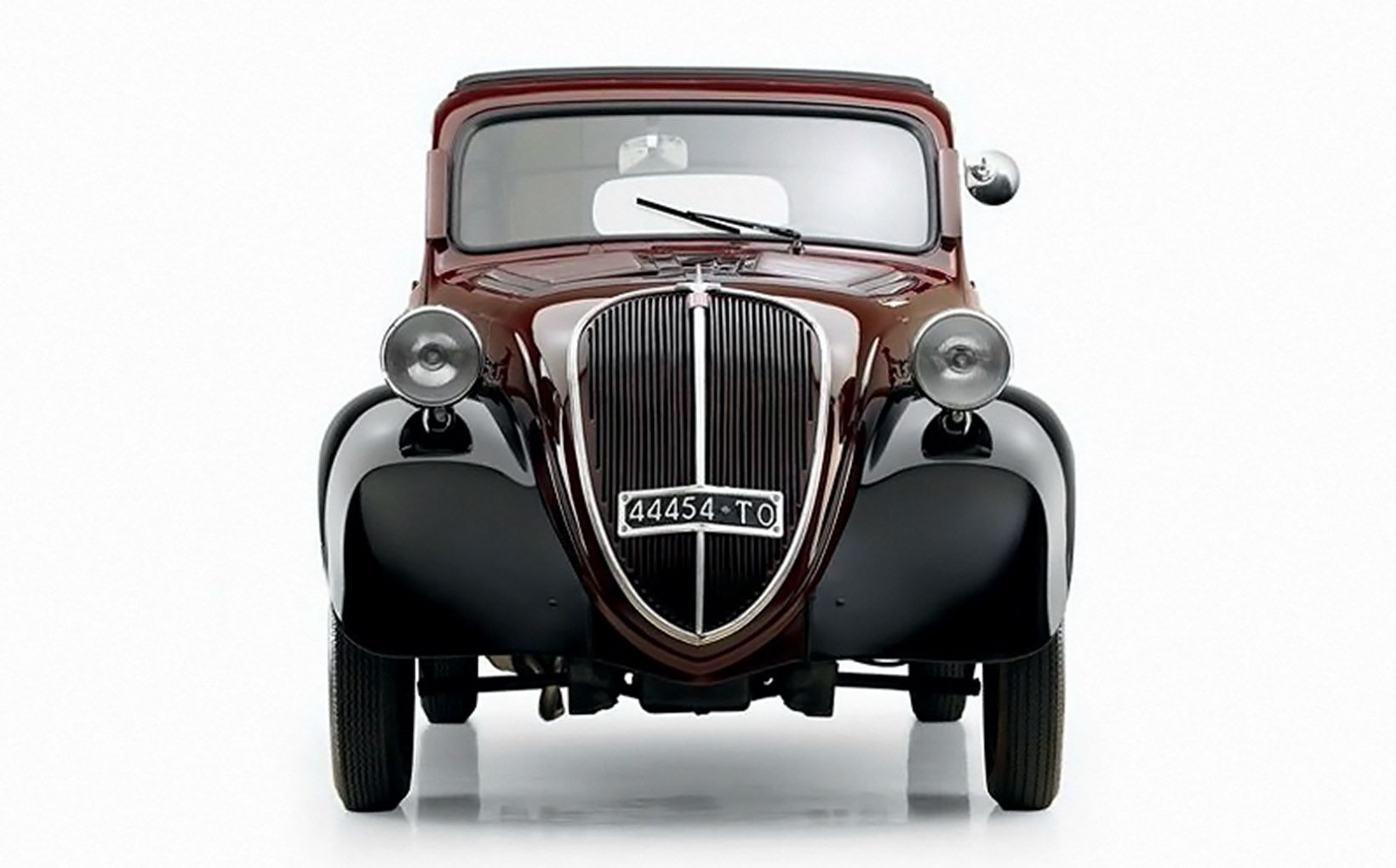 For 1936, the Topolino was quite mechanically advanced. It featured independent front suspension and a four-speed synchromesh transmission, Indeed, in some respects it was superior to its successor, the original edition of which could only reach 45 miles per hour and had a crash gearbox. Fiat’s innovative roll-top convertible body was about the simplest possible and the same theme was pursued on earlier editions of the Nuova 500. Over its production run of 19 years, Fiat itself produced half a million of these cars with many more being built under licence in France and Germany.

Fiat ran a design competition to create a truly small car to suit the Italian culture and lifestyle of the mid-1930s when Tazio Nuvolari was a national hero. But while some pretension to a sporting character was essential in this milieu, low running costs had to be a higher priority. Giacosa won the contest with his vision for a miniature machine that could carry two people and their luggage and be capable of exceeding 50 miles per hour. Driven moderately, the car could cover up to 40 miles on a gallon of low-octane fuel. But driven hard in first or just maybe second gear up an alpine pass, one hesitates to guess the rate of consumption!

Giacosa mounted two bucket seats right in the middle of the car. The engine sat very low in the chassis and fore of the front wheel centres in the interest of adroit handling. A minuscule one and a half litre radiator sat behind the engine. The rear-mounted radiator allowed curvature of the bonnet at the front with excellent forward vision. With a full load of passengers and luggage, weight distribution was 50:50. The synchromesh gearbox, hydraulic brakes all-round and hydraulic shock absorbers were radical for 1936, and even more so for 1933 when young Dante Giacosa wrote his blueprint. Considering that front-wheel brakes were the norm and balloon tyres a relatively new idea, this constituted a most innovative specification! 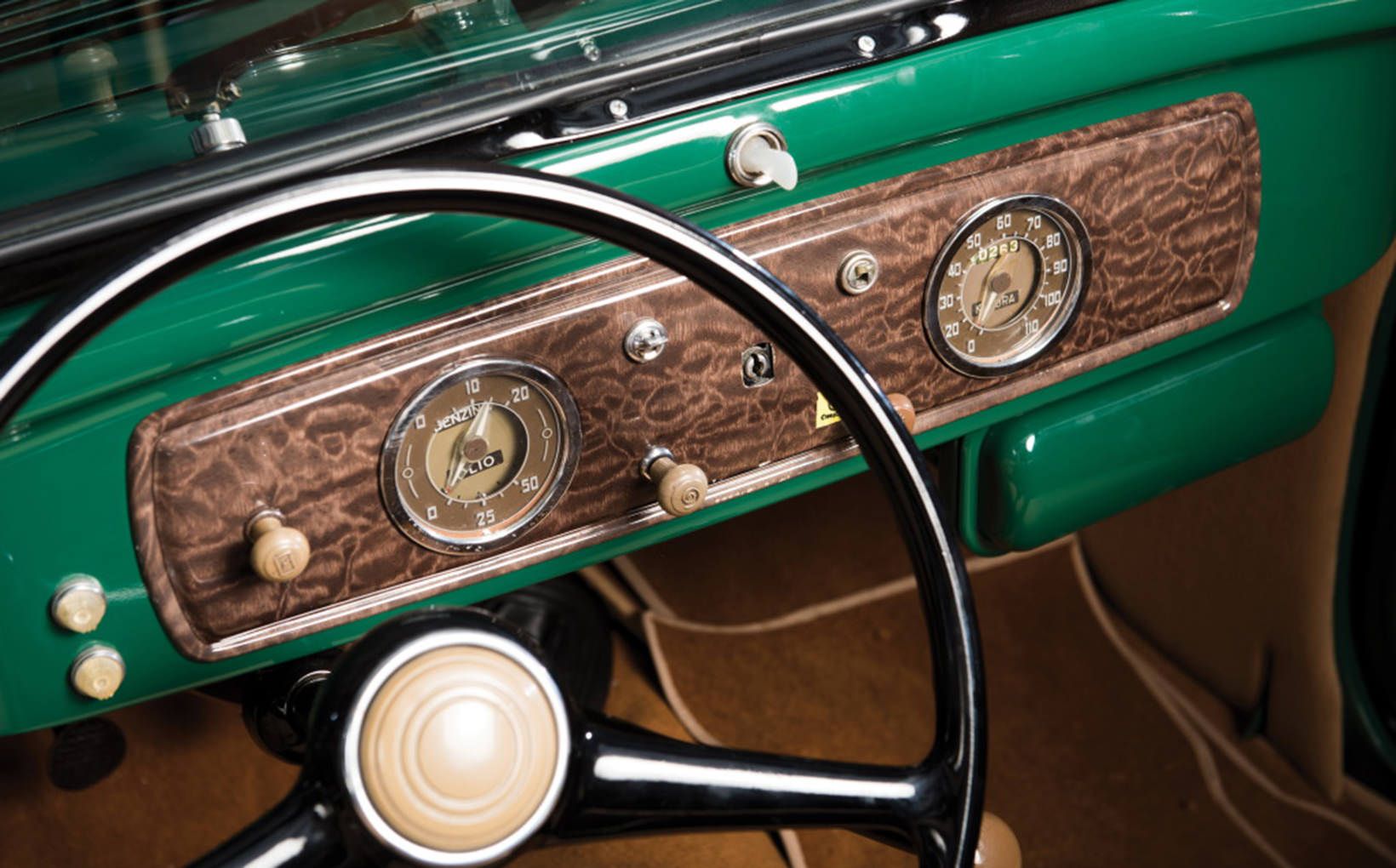 Compare the elan of this interior with any Austin or Morris of the day!

Giacosa came to this task fresh from designing huge trucks so he was perhaps amused at the notion of creating a four-cylinder side-valve engine of just 570cc, as opposed to the more convenient approach of modifying a motorcycle engine for the purpose. Two bearings supported a very short crankshaft in a cast-iron block about the length of a shoebox. This unit made 13 brake horsepower at 4000rpm.

Fiat’s breakthrough small car of the 1950s was the rear-engined 600 of 1955. This model provided a template for the next-gen 500, the Nuova 500 which followed in July 1957. Nine inches shorter and air- rather than water-cooled, the twin-cylinder Nuova was, frankly, a much more primitive design. 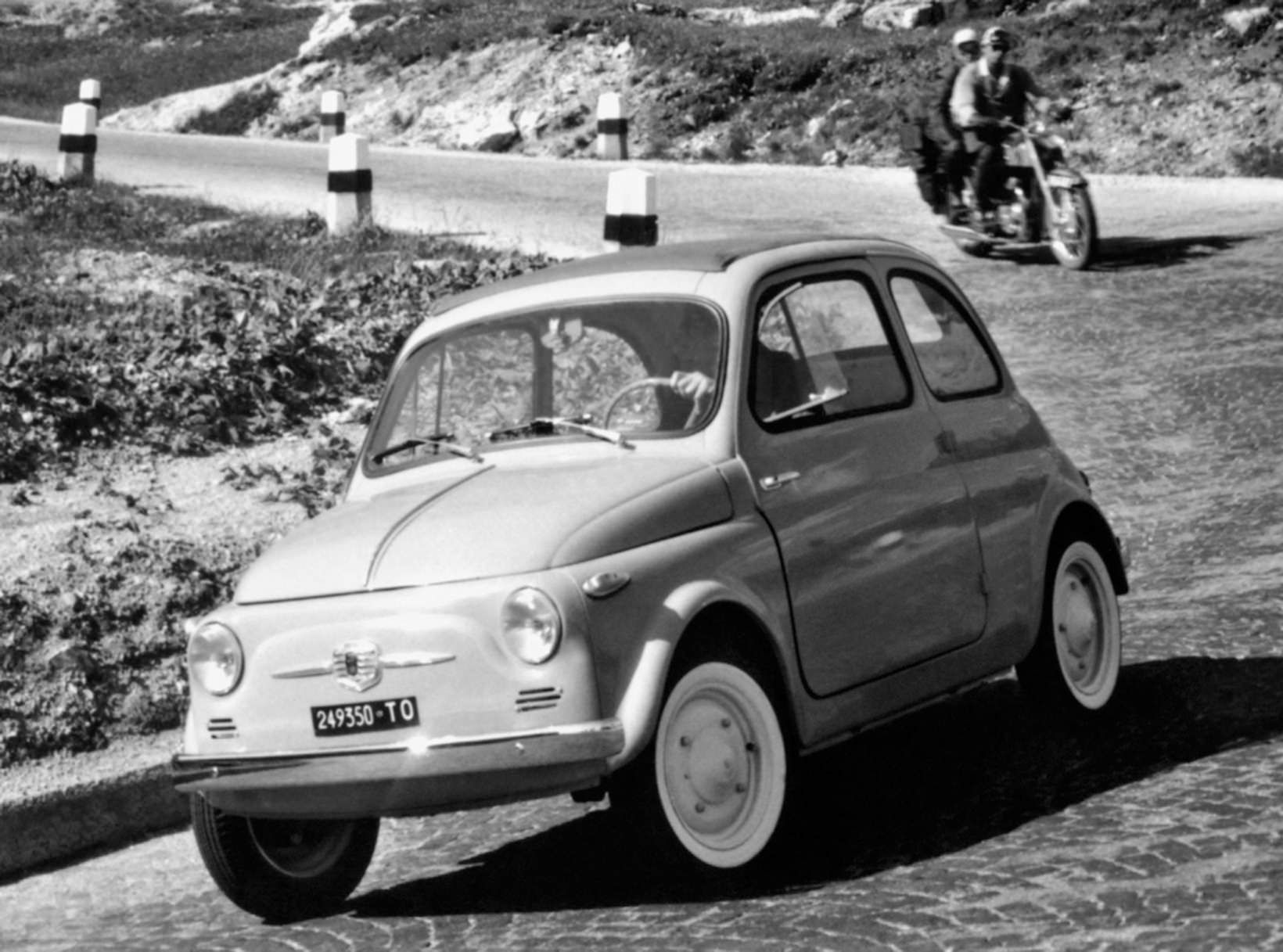 The styling of the Nuova 500 was balanced but the performance was emphatically poor in the earliest version!

While the 600 had a top speed upwards of 100km/h, the earliest edition of the rear-engined 500 could only approach 80 or a deafening 90 on a downhill run. It required a bewildering 16 seconds to achieve 30 miles per hour, which was more like 1920s small car performance; its 500C predecessor took 9.8 seconds, while an 803cc Morris Minor needed 9.7 and the Renault 4CV 9.8. Given the fact that, like the Topolino, this car was conceived by Dante Giacosa, it’s difficult to fathom why the model was so underpowered, unless perhaps the idea was to differentiate it strongly from the more grown-up 600.

Regardless, after barely a year, the Nuova 500 engine was uprated. Even so, any speed north of 80km/h demanded patience and/or a favourable gradient. 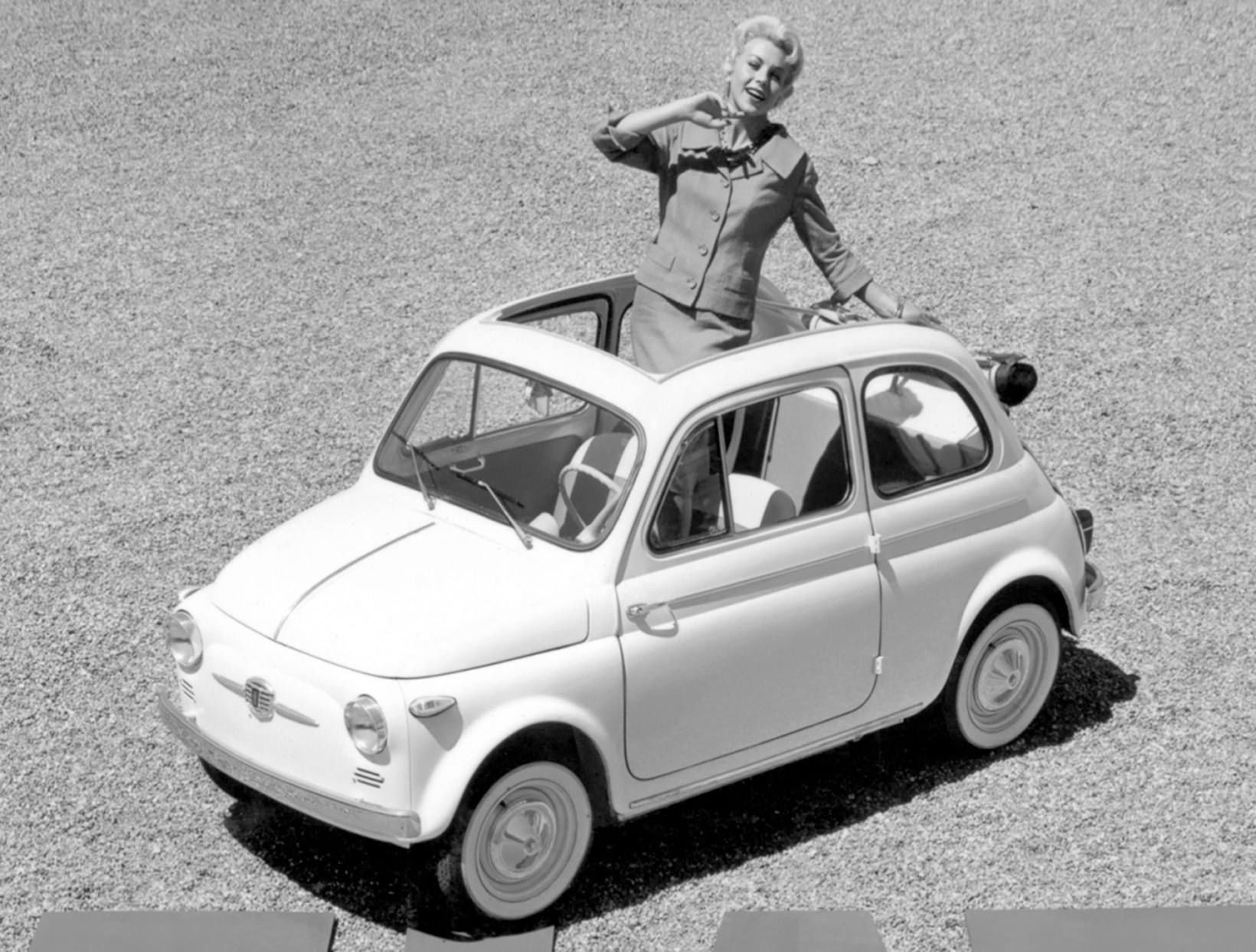 No question, the Nuova 500 was great fun when it was working!

Early Nuova 500s used the same type of roll-down canvas roof as the Topolino, but on later models it folded just halfway to meet steel. A Giardiniera wagon variant (1960-1968) on a four-inch longer wheelbase and with the engine laid on its side under the boot floor was an appealing variant. It had the older-style full-length sunroof and bigger brakes from the 600.

I must confess to having bought an early Nuova 500 on what now seems like an inexplicable whim. In My Other Wife is a Car: Confessions of a Car Tragic, I wrote:

You almost have to laugh when the combination of appalling design and total unreliability hides behind a rego label. I am thinking now of a 1959 Fiat 500 that gave me considerable grief. At first sight, it was a complete charmer with a convertible-style canvas roof that could be rolled back to reveal a kind of automotive sardine can…

Of course there was no synchromesh. Of course you were forever changing gears. Top speed: 55 miles per hour and way scary. I think it had two starter motor failures. When the second one gave up its silly little ghost, I parked the 500 on a hill some way from home, perhaps unconsciously hoping it would be stolen by some lunatic. And, believe me, some lunatic tried.

In mid-1958, Fiat added a Nuova 500 Sport to the range, complete with all-steel roof and two-tone livery. With 21 brake horsepower, the Sport could better 100km/h, although naturally it was still not the equal of the 600. The 500D followed in 1960. Engine capacity was up to 499cc with 17 brake horsepower. This unit prevailed until 1971. The 500D retained the ‘suicide’ doors but had a part-steel roof. Buyers could still specify the full canvas configuration under the name of ‘Transformable’. 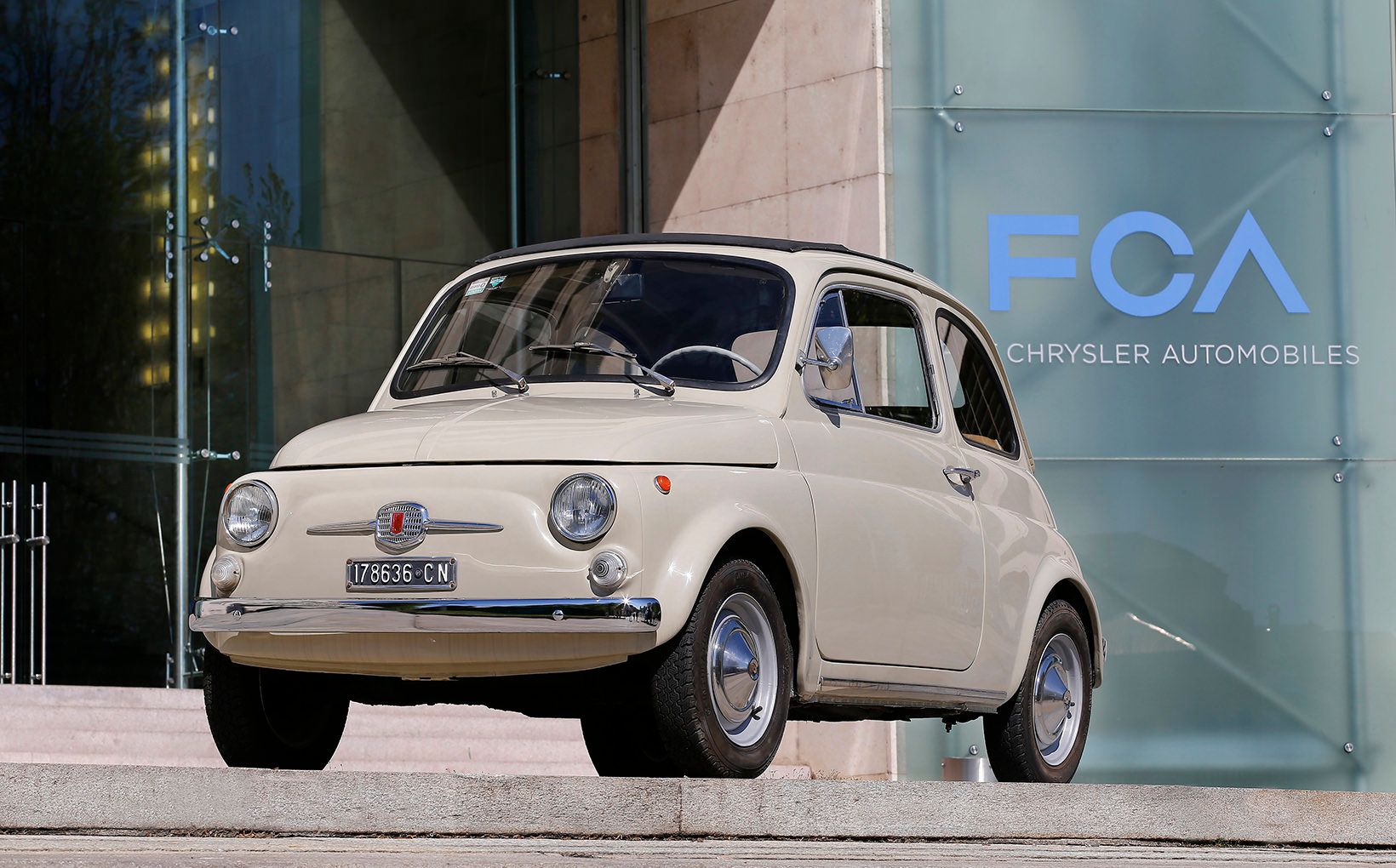 The Fiat 500F finally got front-hinged doors. But the evolutionary connection remained apparent.

Many Nuova 500s were donor cars for Karl Abarth’s sensational special editions, the most famous of which is the 695 SS (1966-1971). With its flared wheel arches and raised engine cover to improve cooling (and stability), this was a spectacular little machine. Maximum power was 37 brake horsepower and the Abarth 695 SS could achieve a top speed of 87 miles per hour. 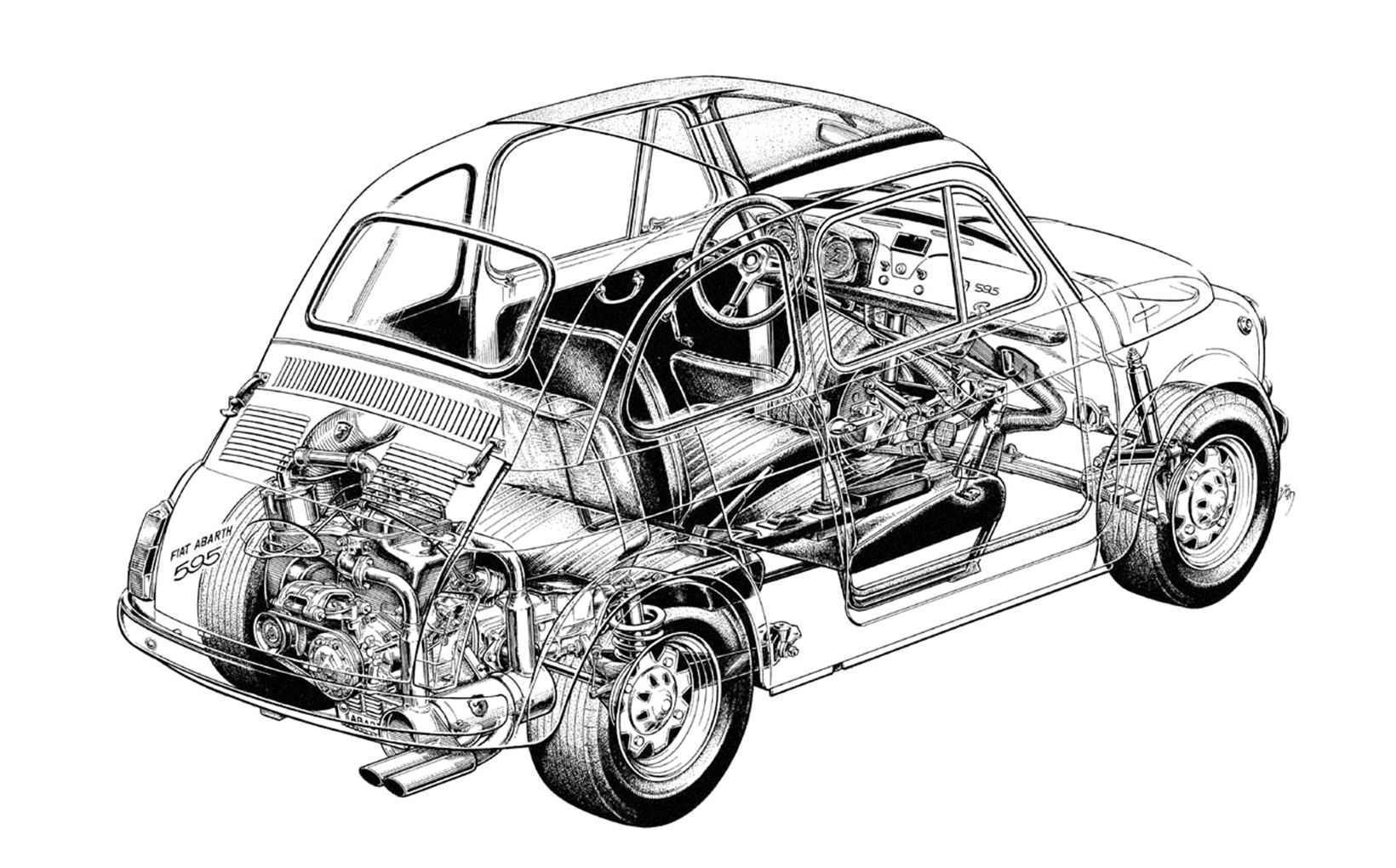 Timed to celebrate a half century since the debut of the Nuova 500 came the front-wheel-drive 500 in 2007. This is best thought of as a retro interpretation in the manner of the New Beetle and BMW’s MINI. But of these three, the MINI is arguably the most authentic because it stuck with the mechanical configuration (front engine/front-wheel-drive) of the precursor. 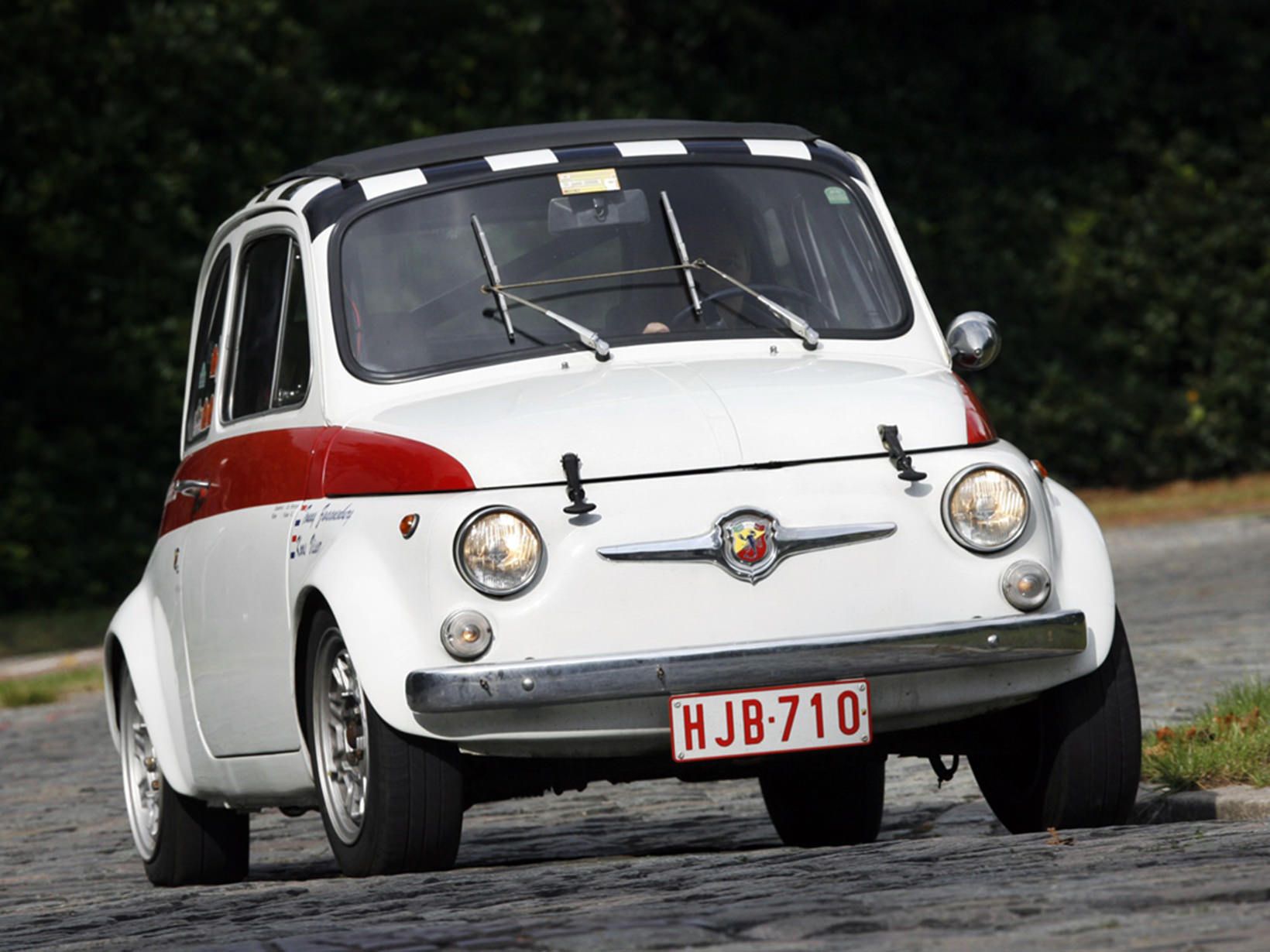 The current 500 is available with a wide range of engines (none of which are of 0.5-litre displacement!), starting with an 0.9-litre turbocharged two-cylinder. Four-cylinder petrol and turbodiesel units are also on offer.

Many buyers have been drawn to purchase by the undeniable cuteness of the design. In Fiat-speak, this is characterized somewhat florally as:

In incorporating this vocabulary into the 500, we wanted to establish a continuity that would establish a continuity that would stretch from 1957 to today, adapting to the languages of the modern day without ever forgetting its roots. The dual rounded lights, the trapezoidal overhang of the front end, the chrome ‘mustache’ to the sides of the FIAT logo, the clamshell hood strengthened and enhanced by a central profile, the front air intake in the lower part of the bumper: all of these features become distinctive and recognisable signs…the Cinquecento language: the line that runs around the body emphasising the upper volume…the chrome handles; the rounded profile of the luggage compartment, slightly protruding, which pushed forward the passenger compartment.

In fairness, though, the glory days of the 500 are over and the current model is nowhere near state of the art and is heavily reliant on nostalgia and the immense character of the Abarth variants which carry hefty pricetags to attract buyers. 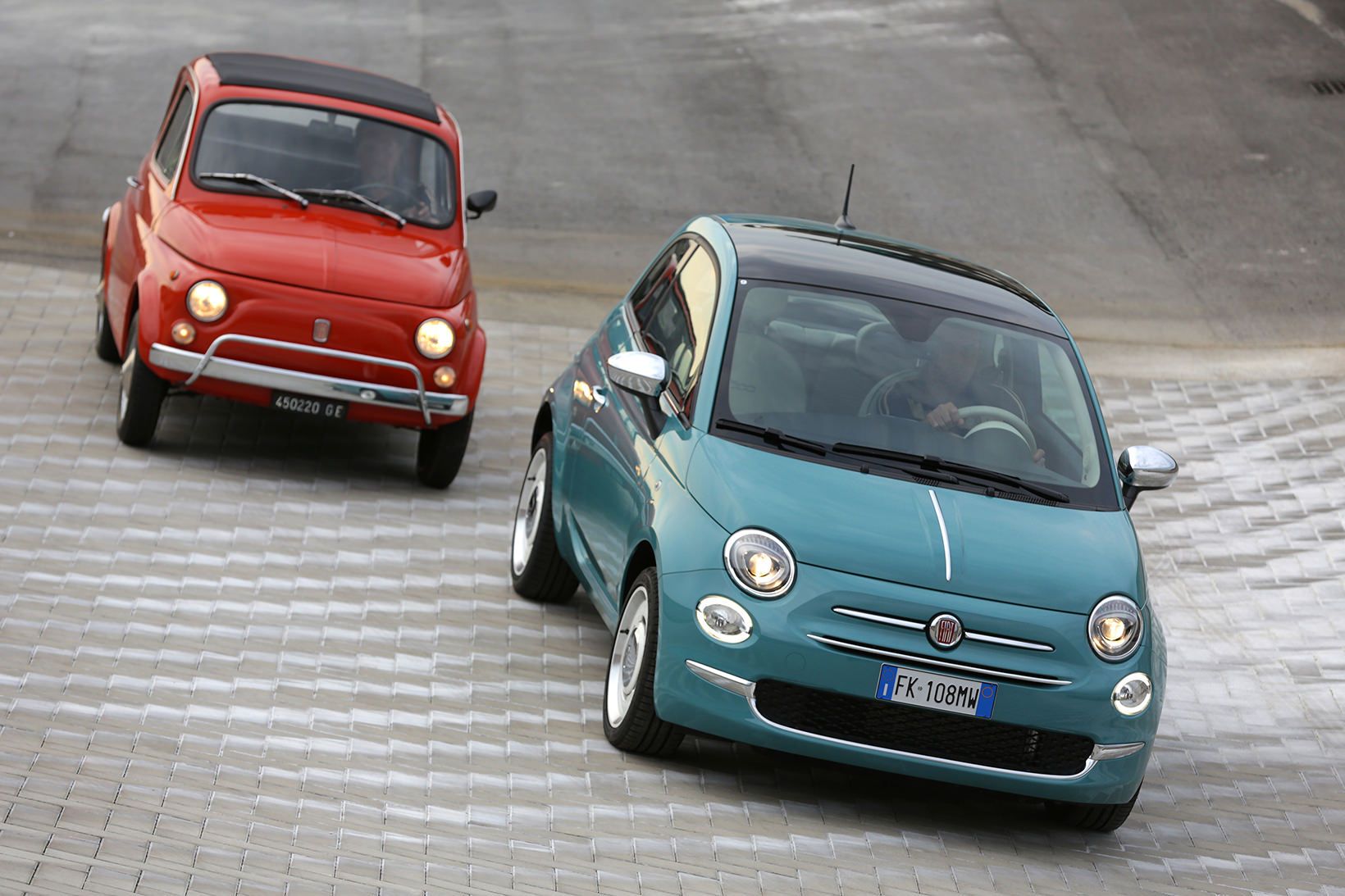 Small cars are no longer small in the way they used to be!

Speaking personally, if I could choose a 500 to include in my collection, it would be a red F, a model which could trace its origins way back to the 1936 Topolino and which had great character as a current offering in the late 1960s and early 1970s. 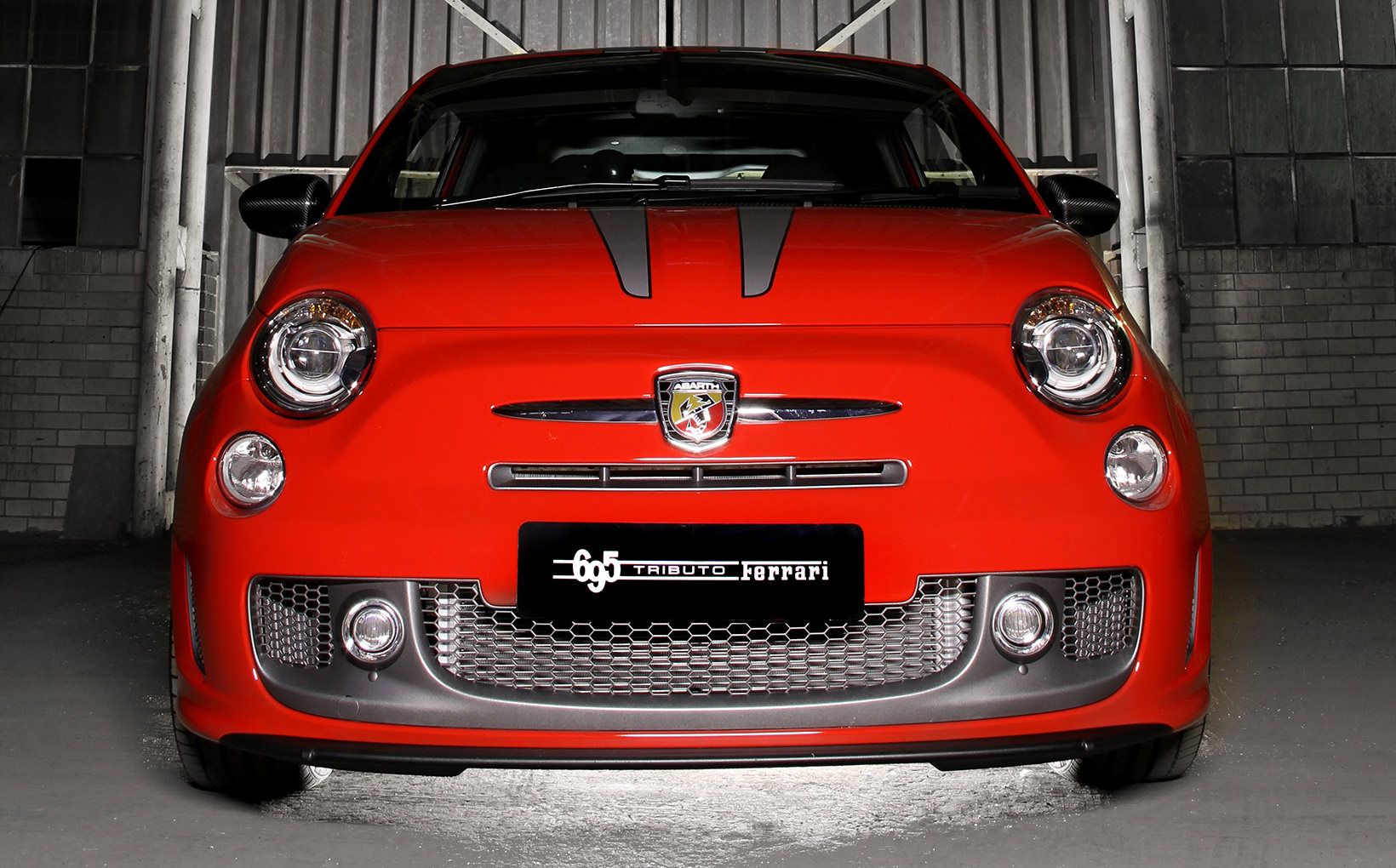