Rover P4: "Almost as good as a Rolls Royce" 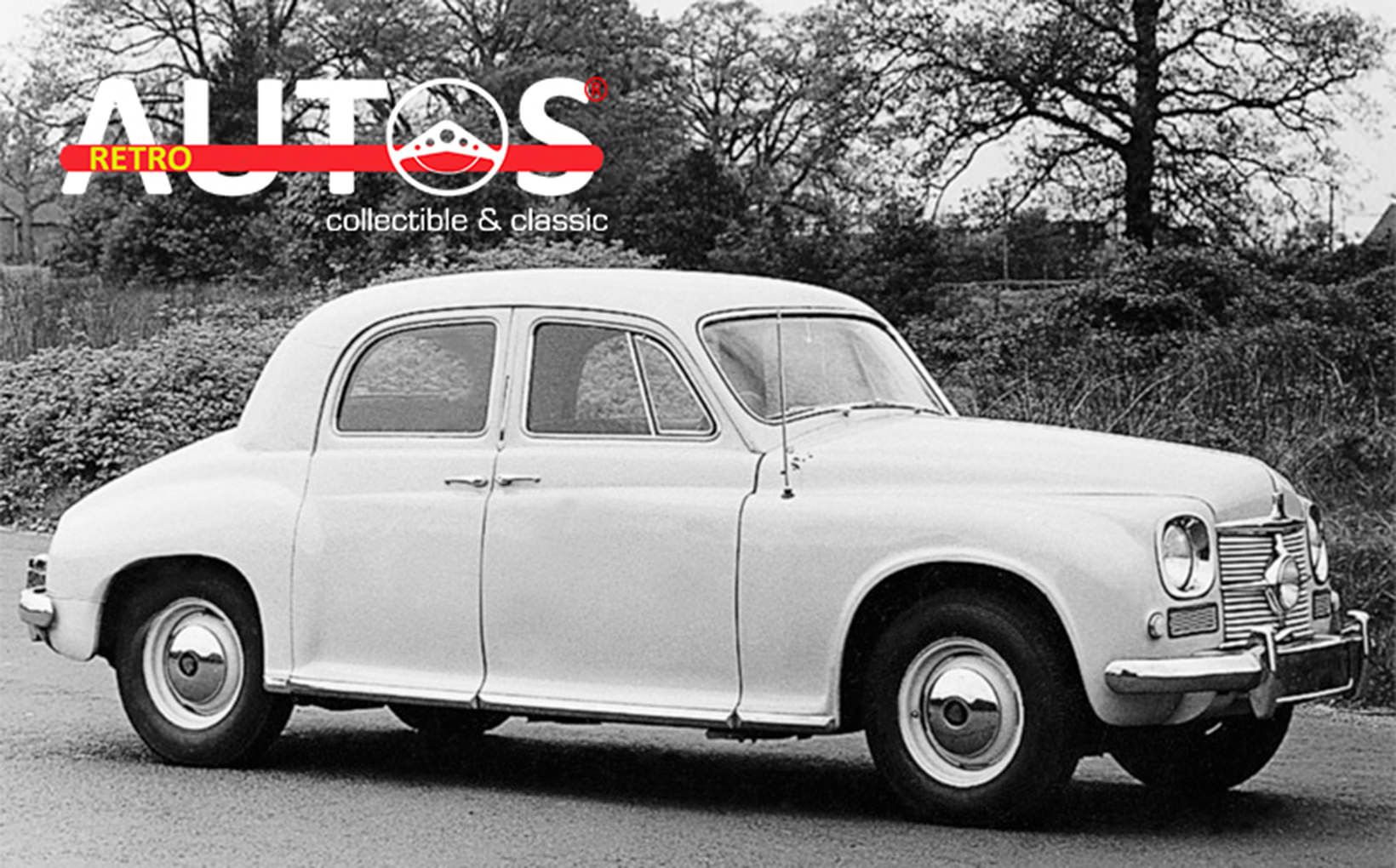 The devotees of that most British of bygone car brands, Rover, are celebrating the 70th anniversary of the release of the Rover P4, or “75” if you want to be precise.

You know the P4, surely? It’s the one with the “Cyclops eye” centre headlight.

When it was released at the British Motor Show on 28th September, 1949 it was the first UK built car to throw off pre WWII styling ideas and fully embrace modern design trends.

And it proved to be a glittering sensation in a dowdy and dismal Great Britain still weighed down by war debt, rationing and bomb damage rebuilding.

The new Rover was unlike any previous car produced by the Solihull, Warwickshire, based company. 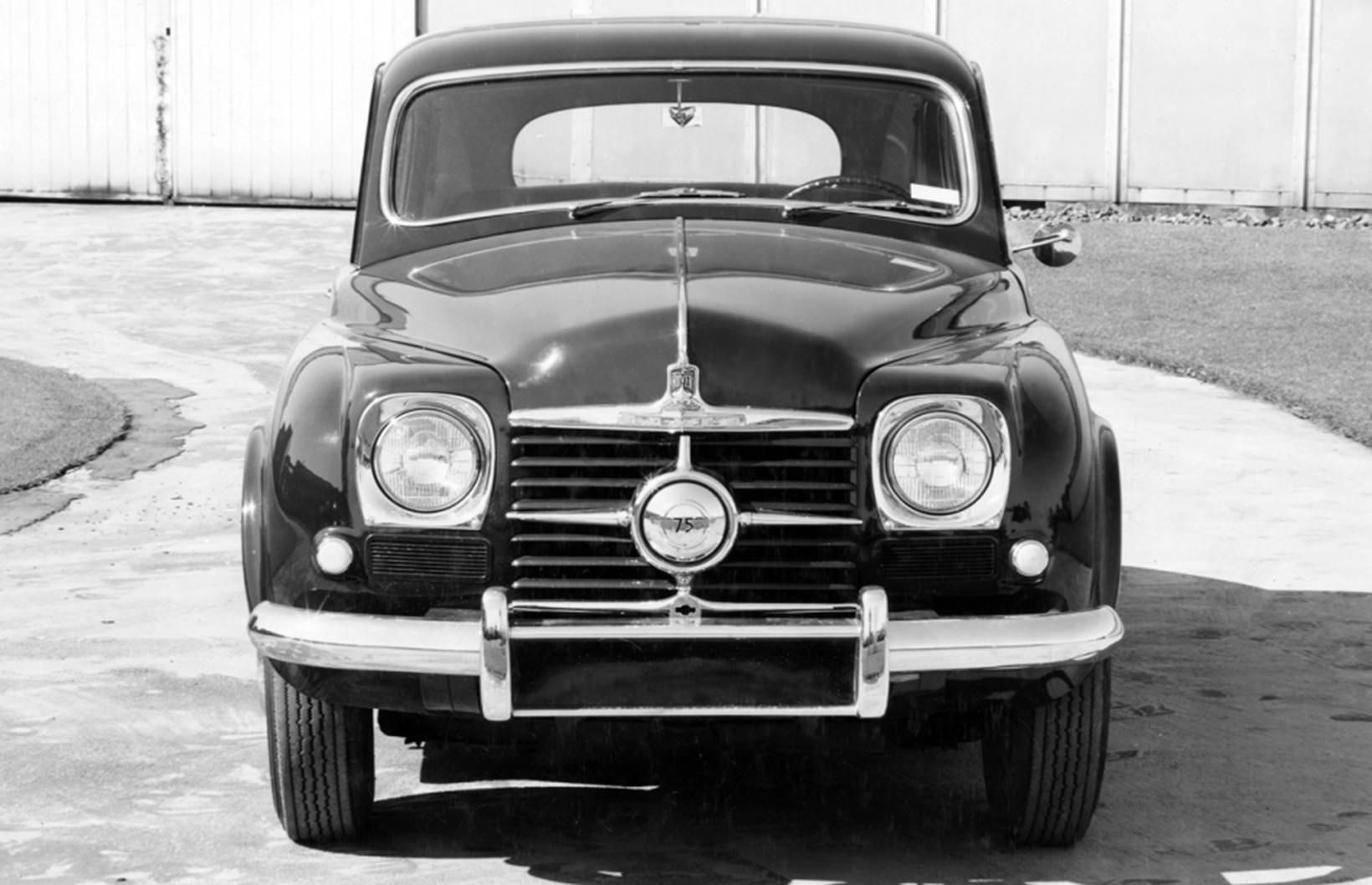 Here’s looking at you!

Gone was the upright grille, separate fenders and running boards which had graced Rovers of years past.

In their place was a grille comprising painted horizontal blades, headlights embedded in the fenders and a streamlined body which tapered to a small boot.

The grille’s lack of chrome gave the front end the appearance of many of today’s electric cars.

The rear wheels were set well back in the body, which allowed the rear door cut line to drop vertically to the rocker panel. The rear doors were hinged on the C pillar permitting occupants to elegantly “walk” into and out of the back seat area. 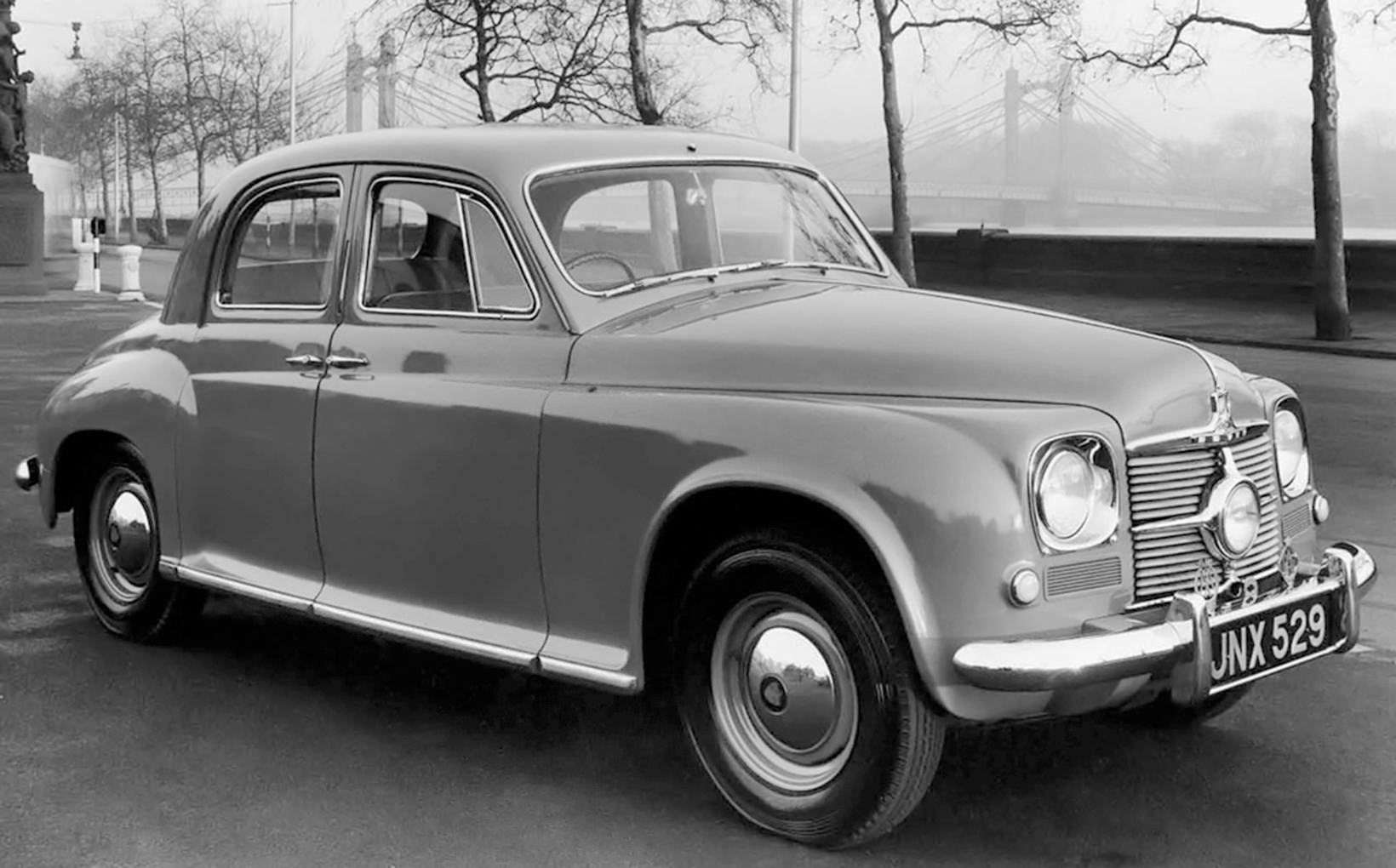 The American Studebaker was a design template for the P4 Rover.

The styling did not please everyone. Critics pointed to the duck-tailed rear end and small rear window. They said the P4 looked like a 1947 Studebaker.

And guess what? That’s what Rover’s design team intended. Indeed, they had shipped a couple of South Bend’s finest examples to the UK and used one as a test car for the P4 mechanicals. 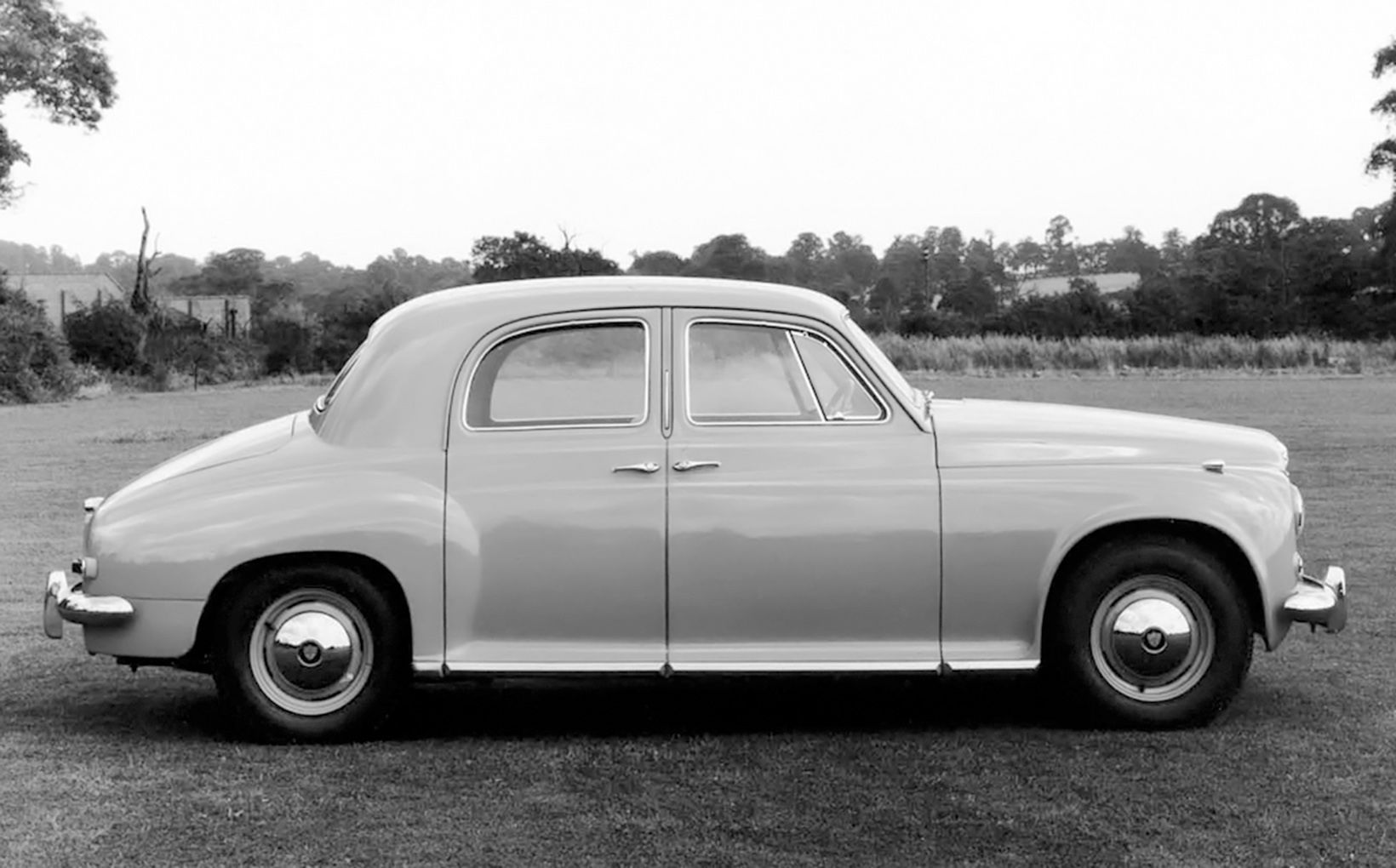 The setback of the rear wheel is clearly evident in side view, providing easy entry to the rear seat.

The early production cars traversed the quiet country lanes of the green and pleasant land with a hybrid hydro-mechanical braking system. This rather fraught arrangement was replaced by a full hydraulics in 1950.

The centre headlight was eliminated and the grille re-shaped in 1952. Road and Track magazine tested a P4 that same year and said it was almost as good as a Rolls Royce. 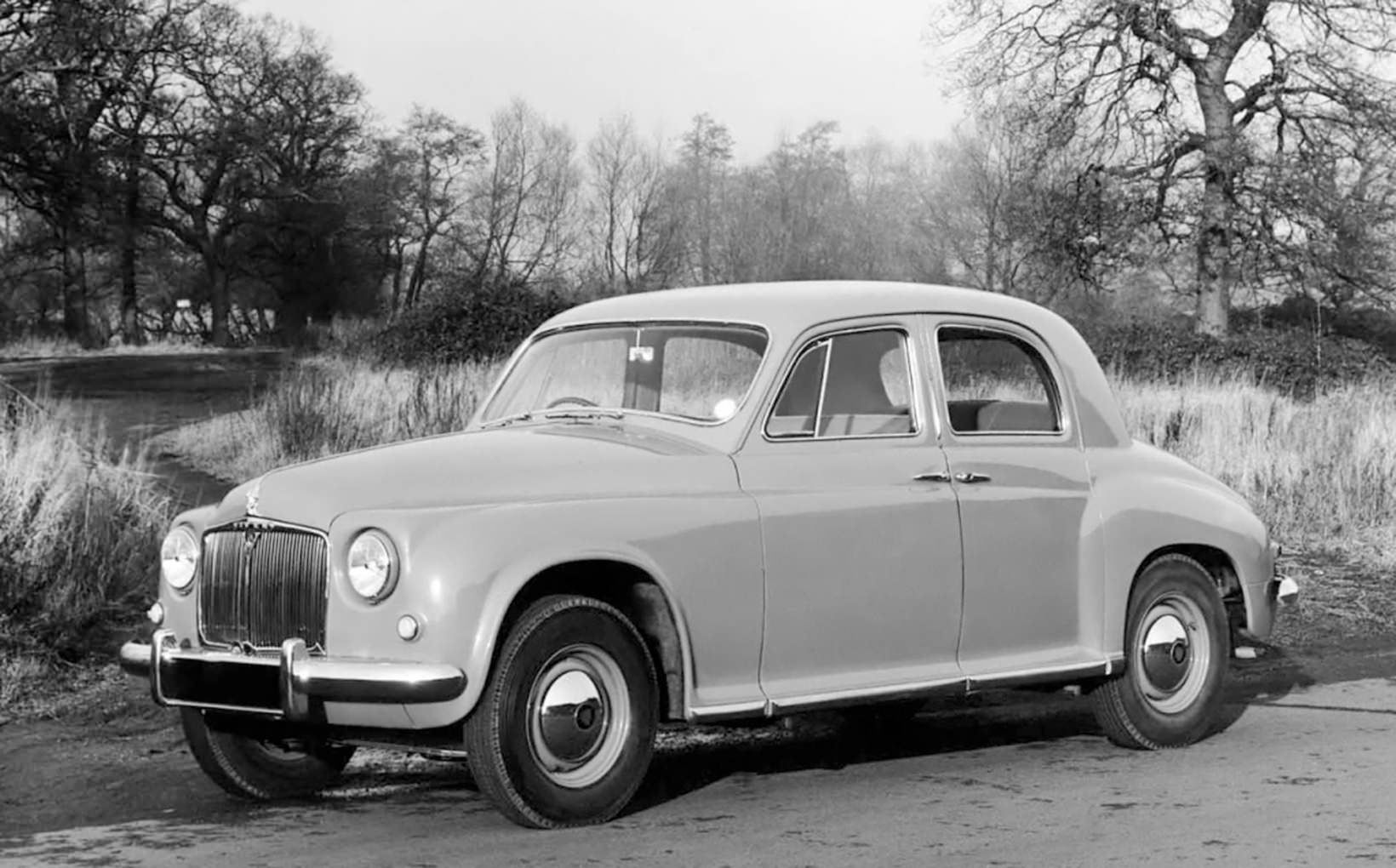 If you owned a P4 in the UK in the 1950s, you were quietly telling the world you had money and taste.

The P4 was aimed at an affluent cadre of car buyers who demanded understated style and comfort. In the class-conscious UK society of the 1950s to own a P4 was to be considered as someone of stature and importance.

In Australia a P4 was also an up market car and they always seemed to me to be owned by the local doctors back when the medical profession did house calls.

During the 1960sthe P4 has picked up the nickname “Auntie”. The origins of the tag are unclear. The best explanation appears to be that when the swinging sixties arrived in the UK the car was deemed old fashioned—like an elderly aunt. Totally un-PC in the 21st century.

Anyway, the same basic shape sold until 1964, which means Rover got its money’s worth from the design.