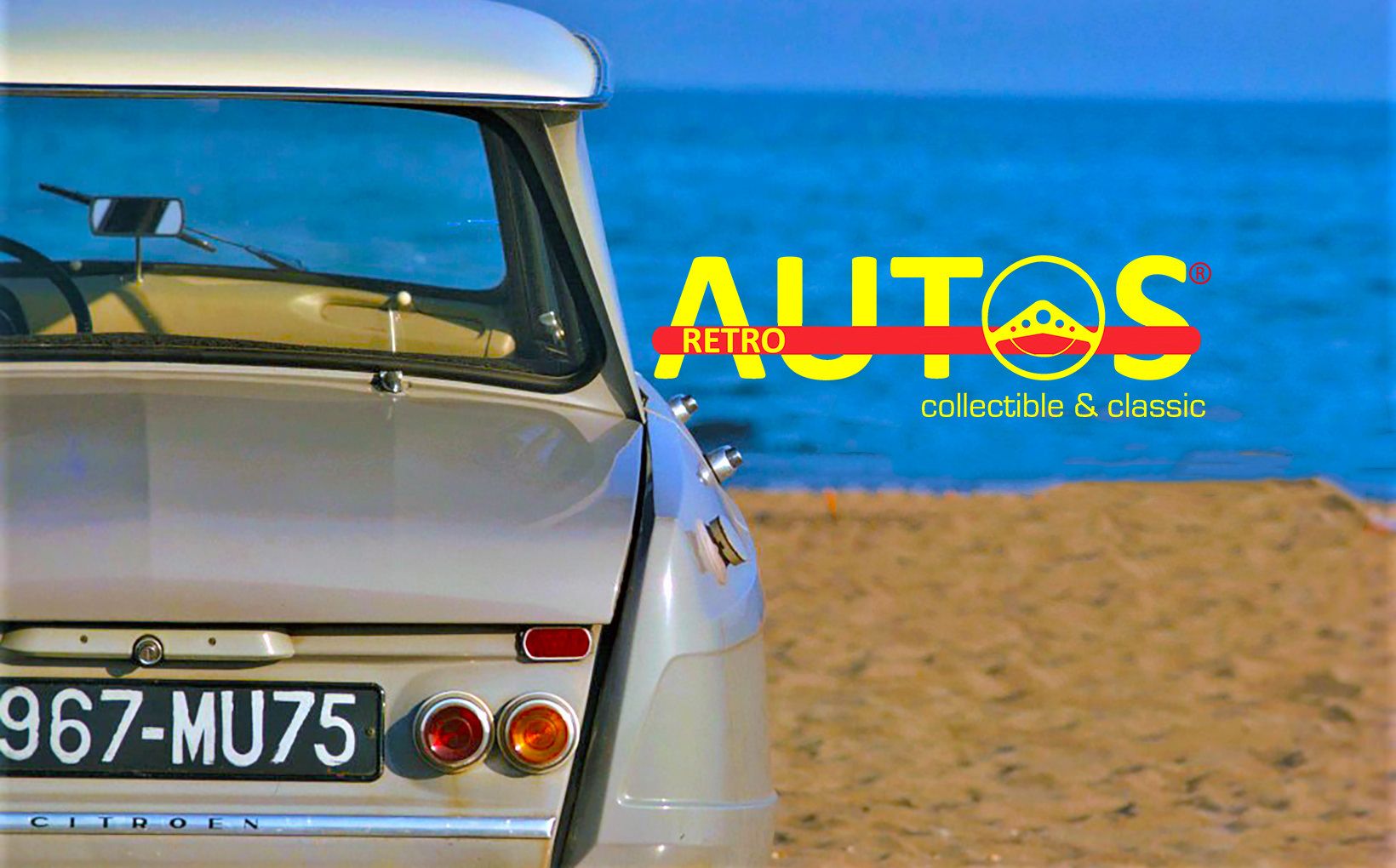 Without a doubt, 1961 was one of the most prolific years, maybe the most prolific, for totally new cars. I’m not talking about mildly face lifted models, such as the EK Holden or the Riley Elf. I mean new cars.

Sixty-one was the year Jaguar unveiled the E-Type and Mark 10. At GM and Ford in the USA an incredible effort resulted in every car except the Corvair, Corvette, Falcon and Comet being fully restyled. GM’s innovative “senior” compacts also made their first appearance. Ford’s award-winning Lincoln’s Continental and its Thunderbird twin were unveiled. VW’s Type 3 was launched. Citroen startled everyone with its Ami. Simca’s 1000 joined the rear engine trend and the Renault 3/4 went front wheel drive. Volvo created the iconic P1800 sports coupe and International Harvester replaced the horse with its Scout 80. The Japanese started to make their presence felt with the Toyota Publica and Hino Contessa. And that’s only the start!

Part one of this two-part series covers Europe. Part two, which appears later this month, is devoted to Japan and USA.

Only Citroen could let this car escape its styling studios. The Ami was built on the 2CV frame. Power came from a 602cc twin-cylinder engine. Sliding windows kept the price low, but it was still 30% above the 2CV. The shape kept the buyers away. When it was discontinued in 1978 only 720,000 had been sold. Along with the 1960 Ford Taunus 17M it pioneered oval headlights. 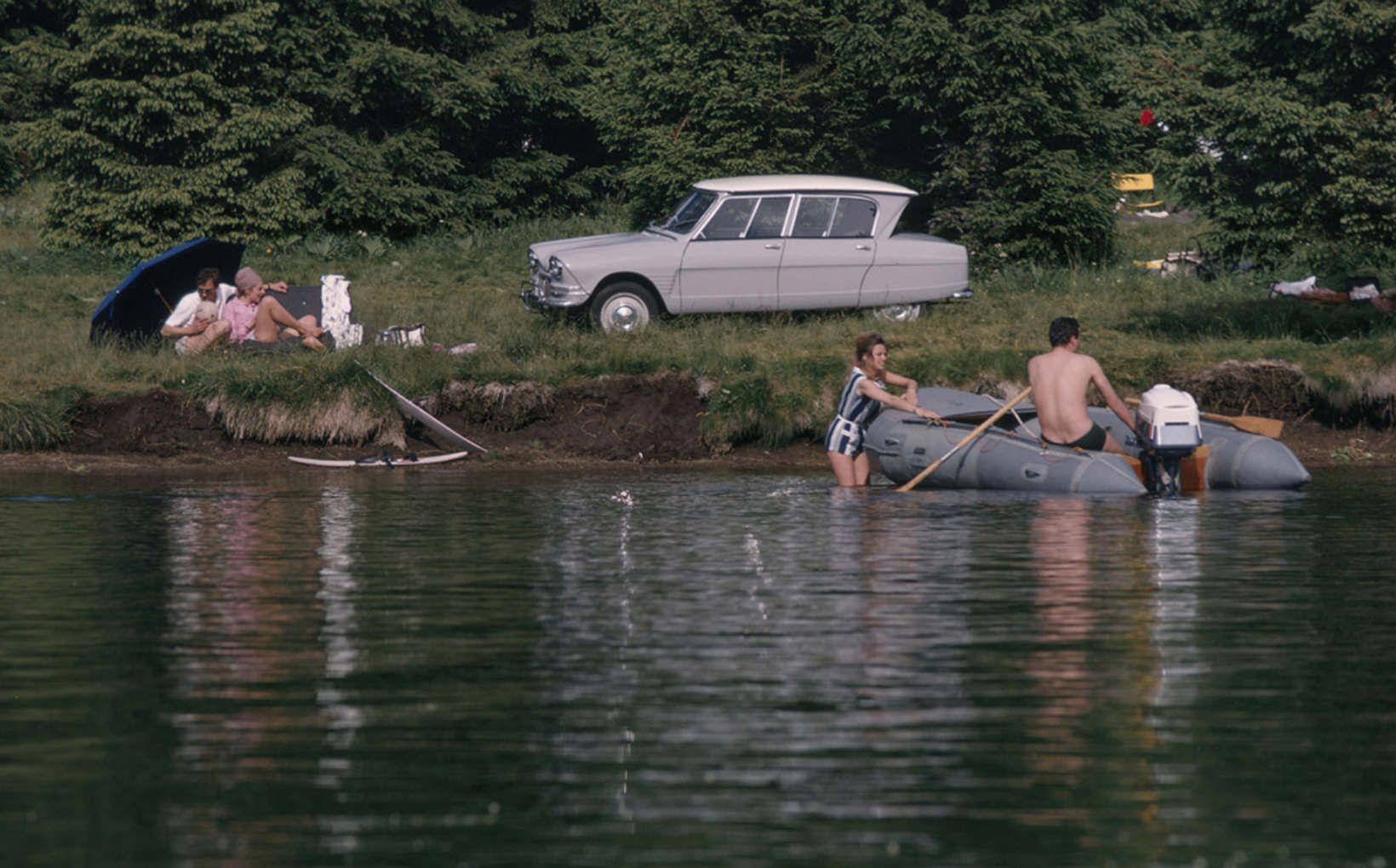 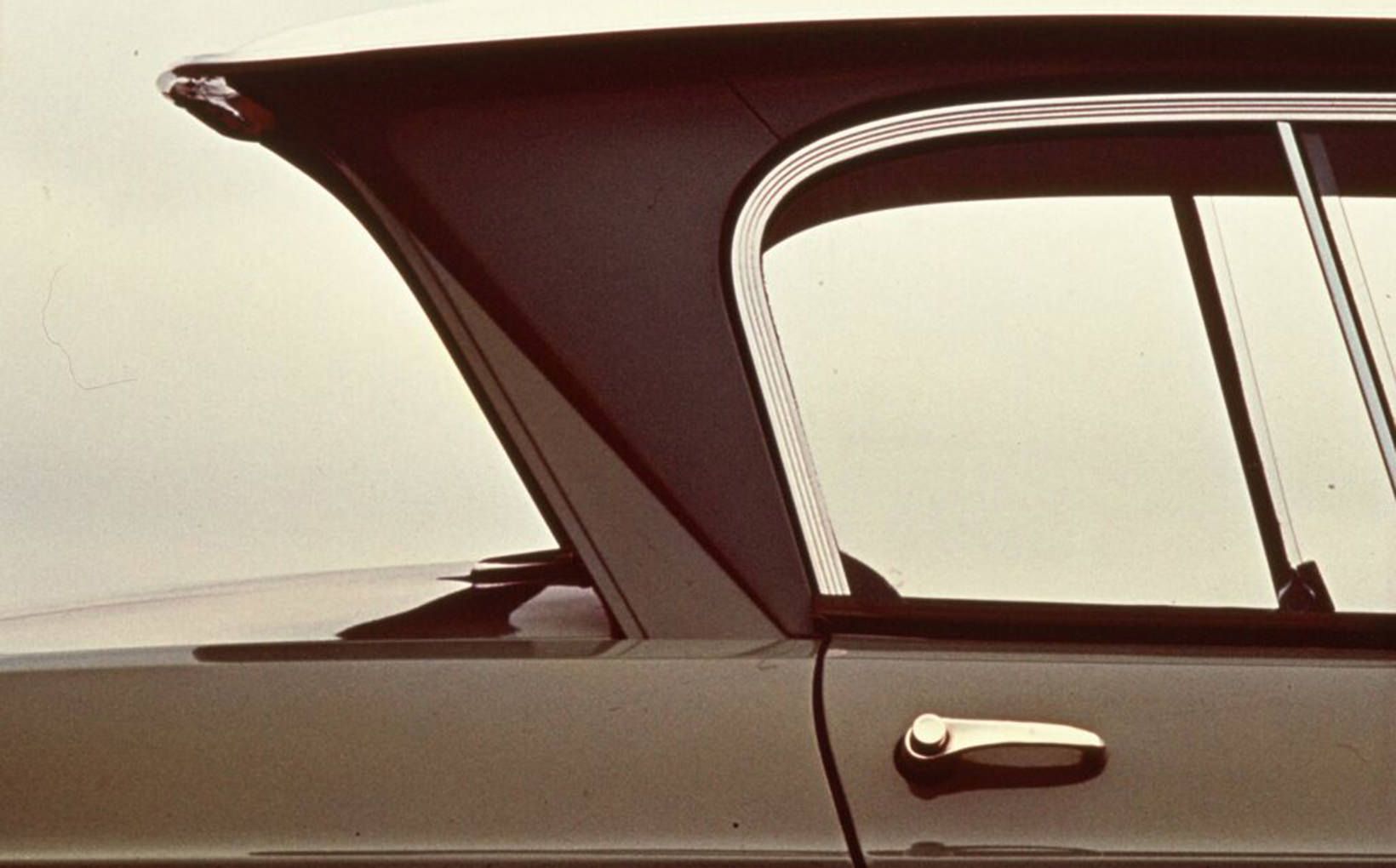 The reverse angle rear pillar and window requires a deft styling hand to make the outcome look right. The Ami was not one of those cars on which deftness was applied.
Photos: © Stellantis.

The 3/4 was Renault’s first front wheel drive car and marked the beginning of the transition from the company’s rear engine models. Sharing the same body, the el-cheapo 3 had a 603cc engine, while the better quipped 4 boasted a 747cc unit.

Replacing the Renault’s 4CV model, the 3/4 was unashamedly based on Citroen’s Ami/2CV. The hatchback’s practicality and simple styling led to over a million sales in just four years. The 3 was withdrawn in 1962. Production of the 4 concluded in 1992 with eight million sold. The 21st century hatchback owes its layout to this car. 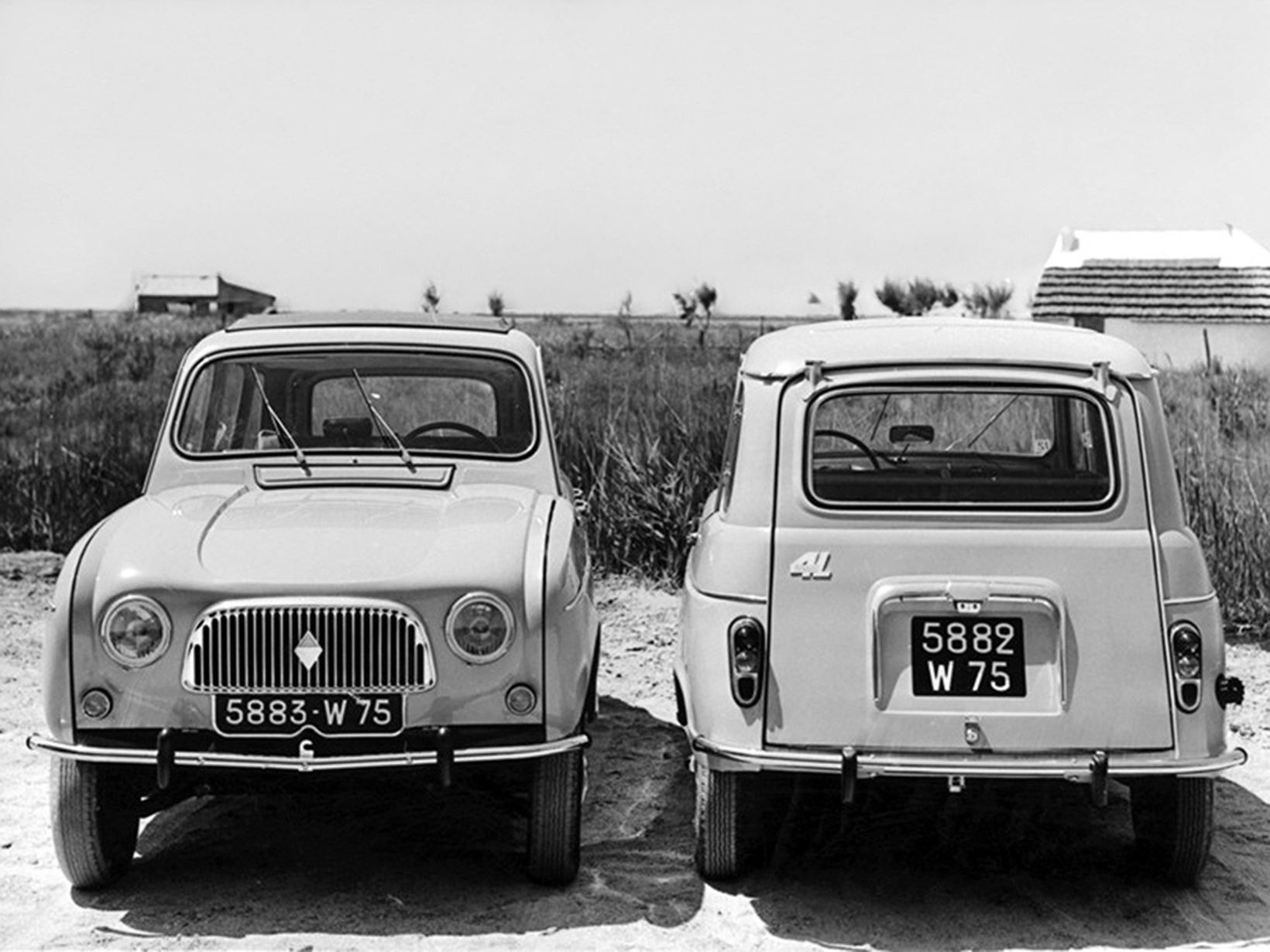 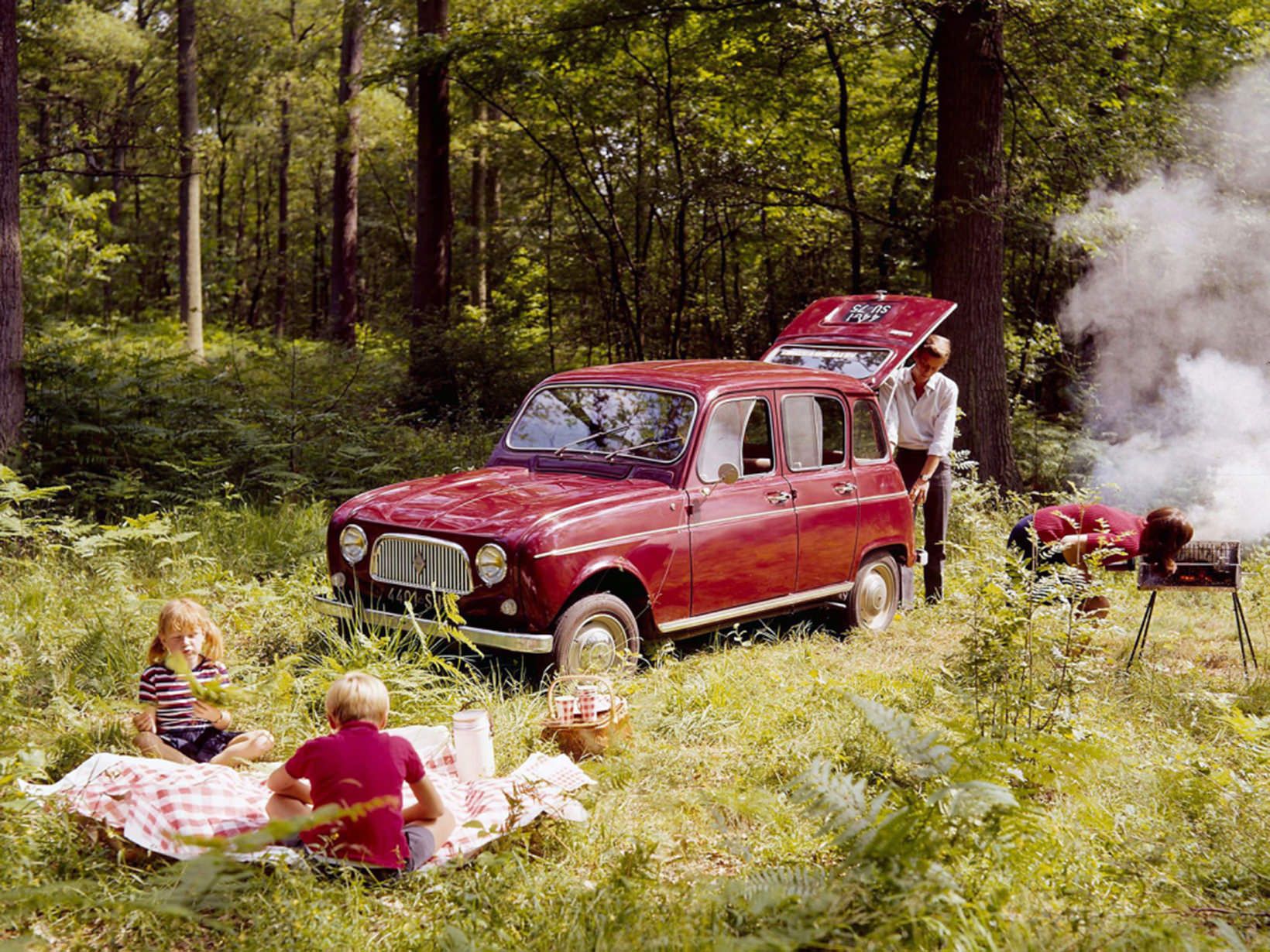 Form may have followed function on the Renault 3/4 but that did not hamper sales of the car.
Photos: © Groupe Renault

The Simca 1000 was the company’s only rear-engine car. A Corvair clone, it was originally one of the alternative design proposals for the Fiat 850.

I reckon the 1000 is one of the smartest looking small cars of the early 1960s. It has the appearance of a smaller Fiat 1300/1500, which is not surprising, considering Fiat was Simca’s major shareholder until 1963.

More than 1.9 million were built until 1978, when both the model and the Simca name were discontinued by Chrysler, who’d acquired the company during the 1960s. 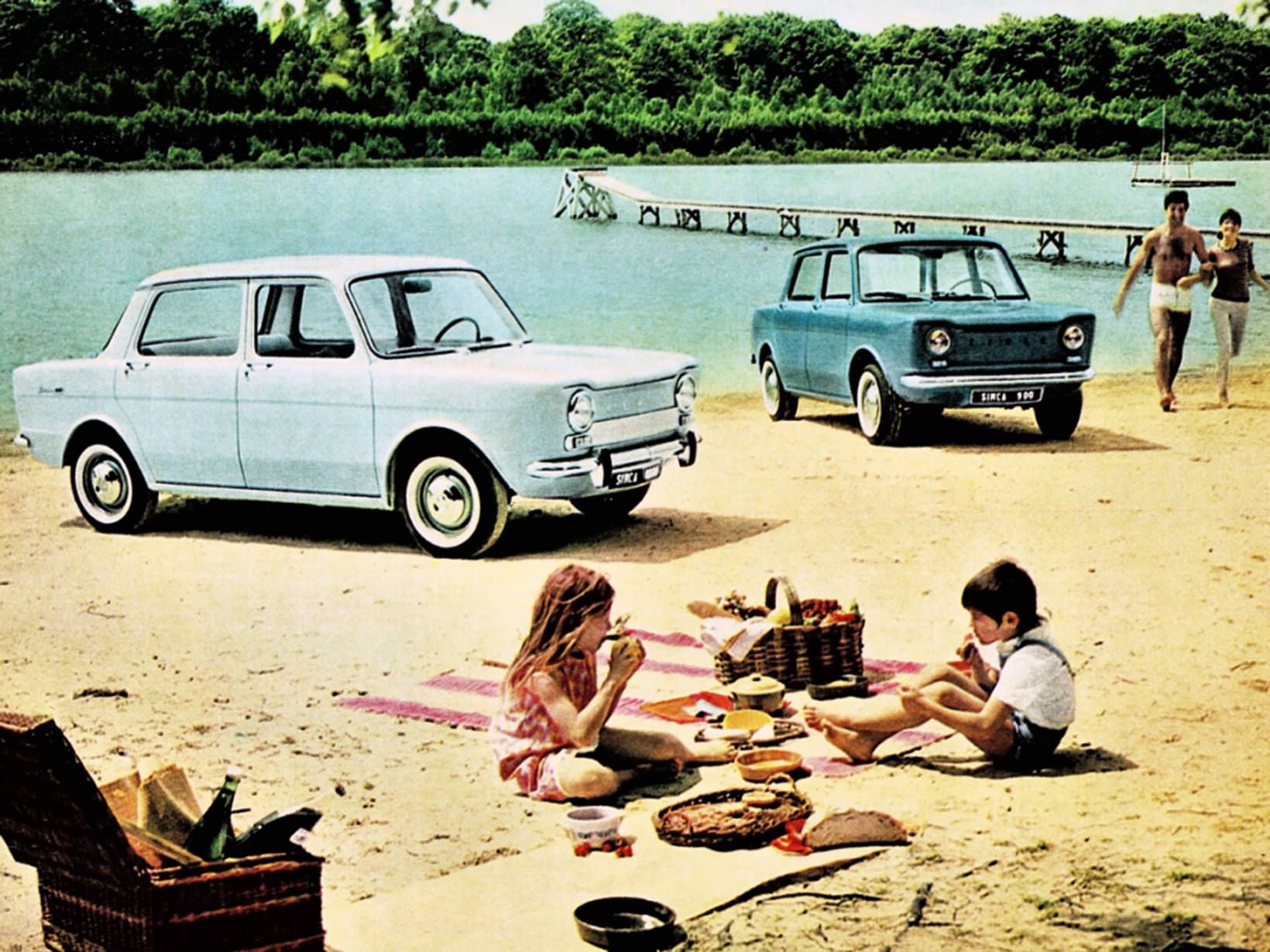 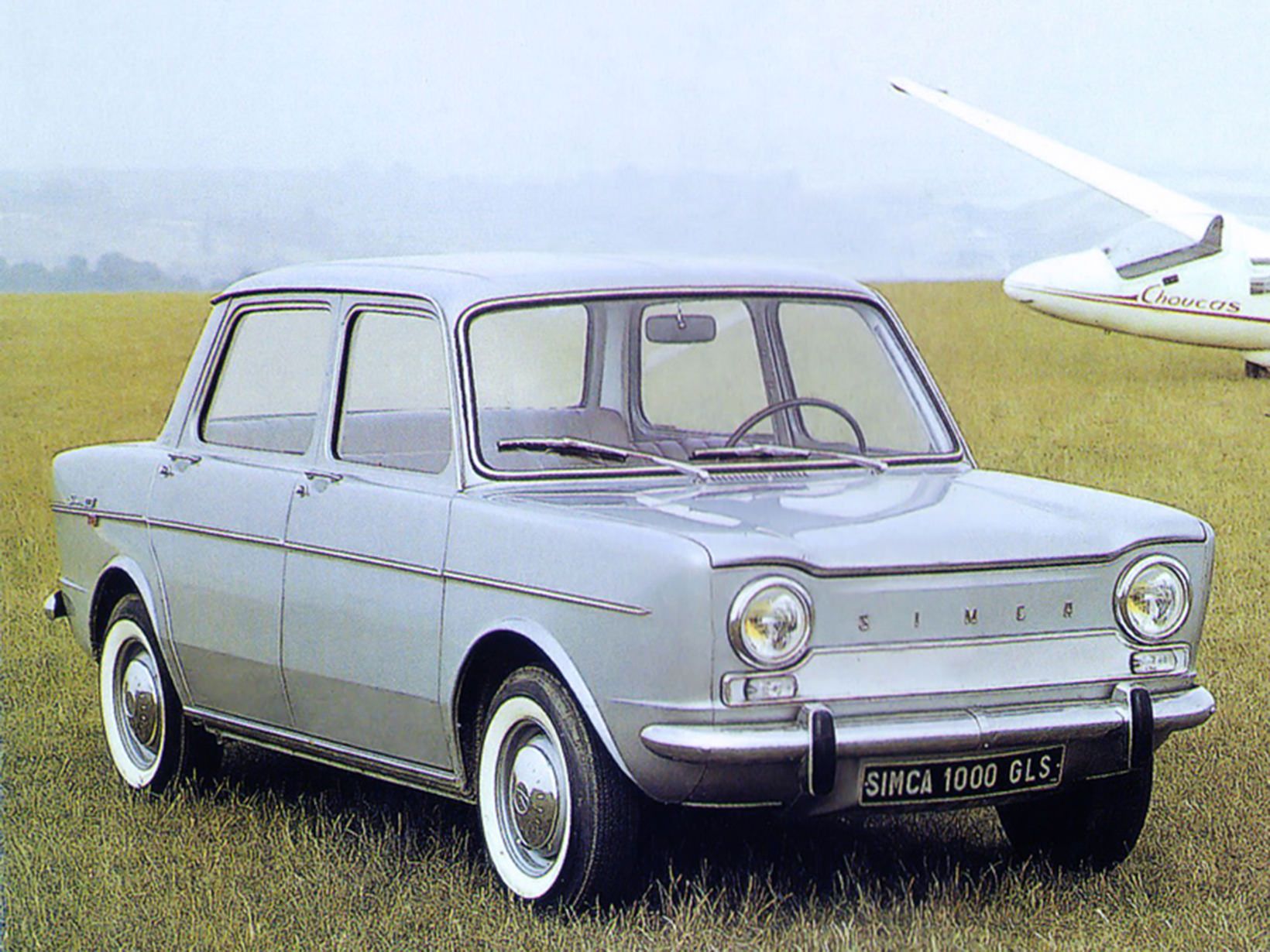 Simca’s 1000 is what a four door Hillman Imp might have looked like, had Rootes decided to develop such a car.
Photos: © Stellantis

Another styling clone of the Chevrolet Corvair, the Fiat 1300/1500 is one of those instantly recognisable sixties chic designs. Twin headlights, spirited performance, great handling and front disc brakes meant it was exceptional value for money in Europe.

Writing in the March 1962 edition of British Motorsport magazine, Bill Body extolled its virtues, saying that “it is the poor man’s (Lancia) Flavia, except that it out-accelerates this costly Lancia. The Fiat 1500, refined, fully-equipped and sensibly priced, is a genuine 90mph family saloon. Indeed, it is faster and out-accelerates such cars as the Series III Sunbeam Rapier and gallops away from Peugeots and similar saloons, as well as disposing of sports MG Midgets and Austin-Healey Sprites.” 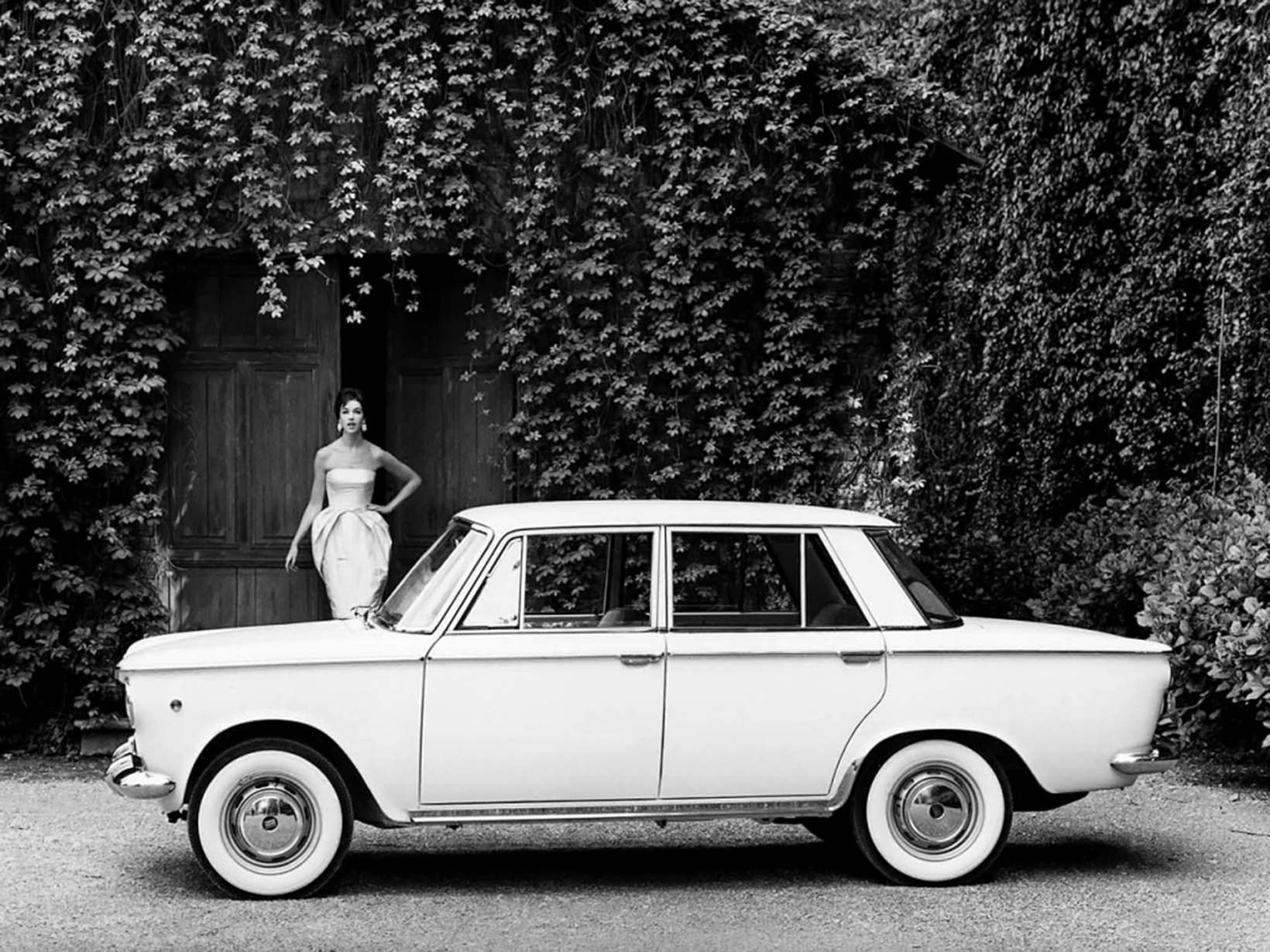 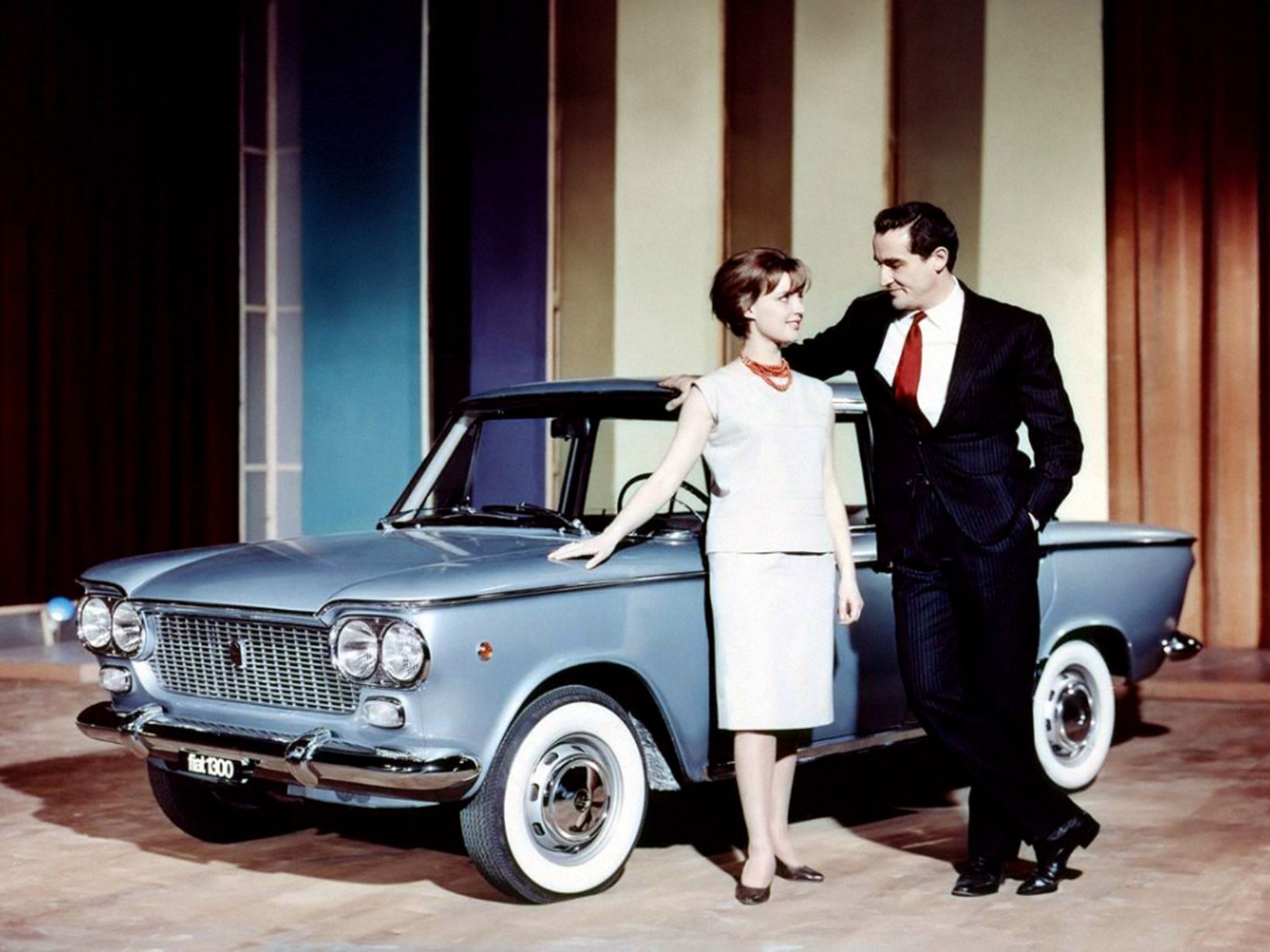 Smart, chic and very sixties, Fiat’s 1300/1500 is another European classic I’d like in my garage.
Photos: © Stellantis

The technical advances did not stop with front wheel drive. A transverse leaf spring front suspension sat beneath a 1.5 litre petrol injected “boxer” four-cylinder engine. Four-wheel power disc brakes were a revelation, even in Italy. 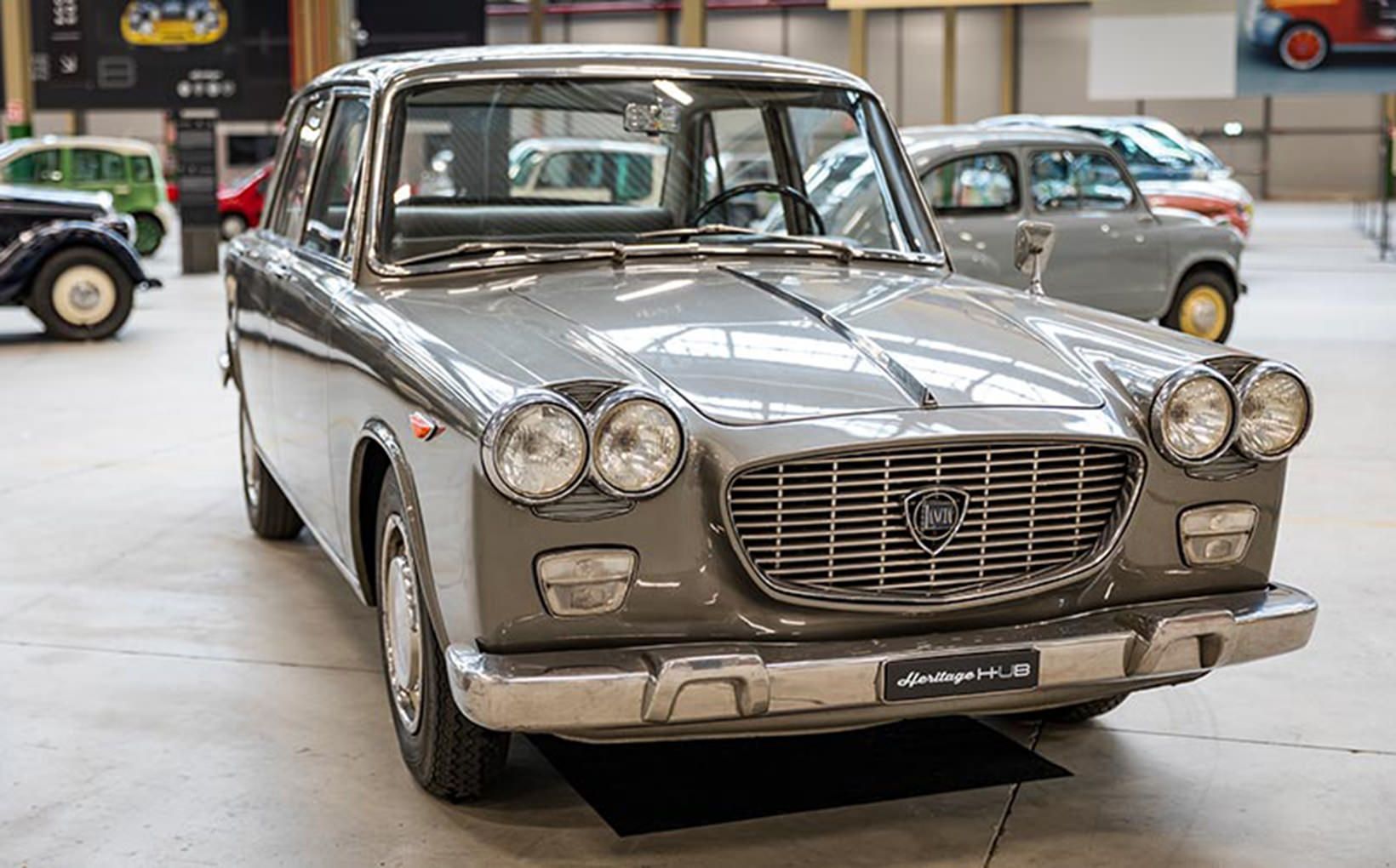 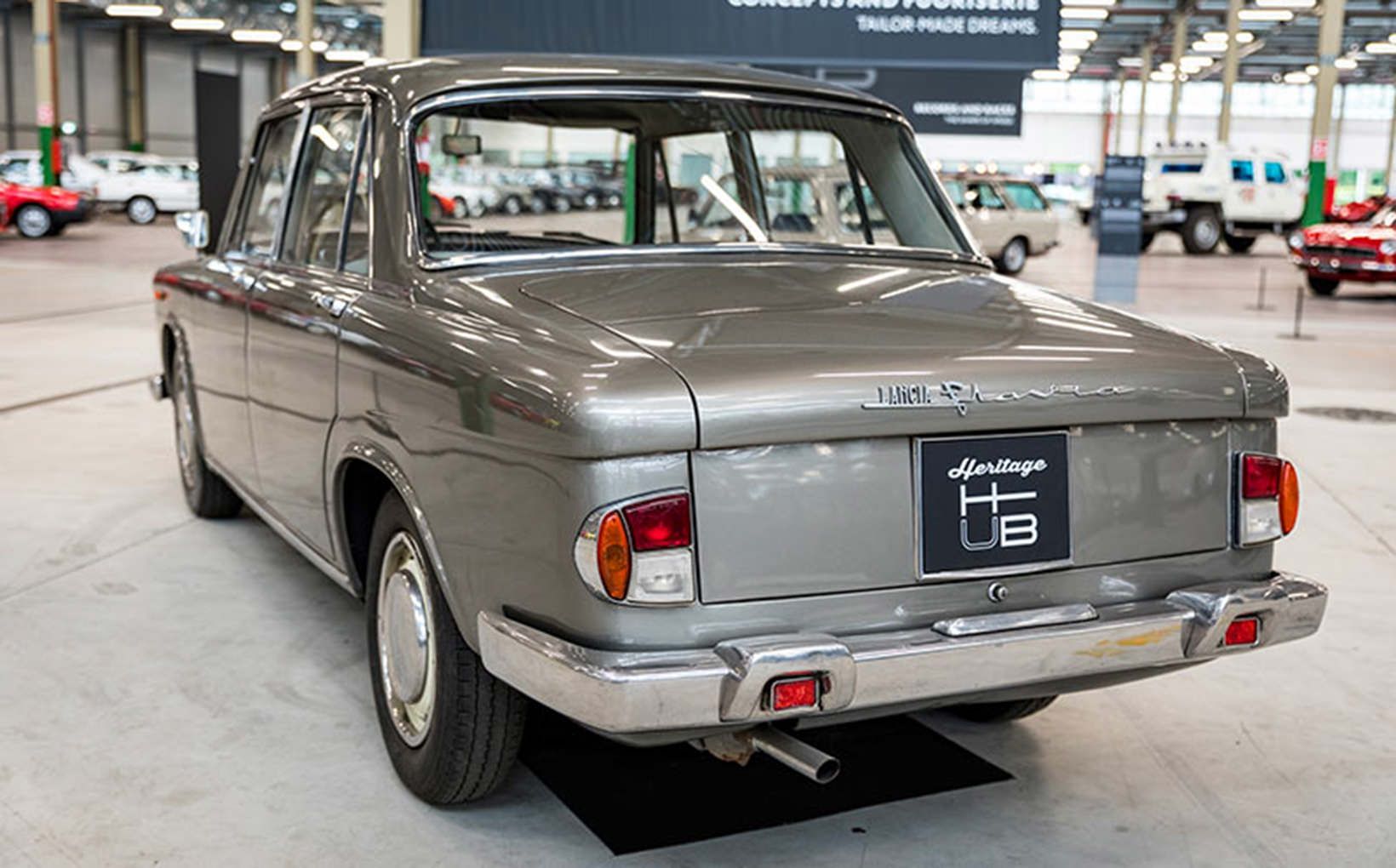 As a medium sized semi-luxury car, the Lancia was pitched at the same European market occupied by the Fiat 1800/2300 and Peugeot 404. What kept sales low was its unresolved styling and subdued performance. The bug-eyed front end and plain rear flanks did not convey refinement while the 78bhp engine struggled under the weight of the car. It was later boosted to 1.8 and then two litres.

A Pinnifarina designed coupe and convertible were launched at the Turin show in November 1961 for the 1962 model year. Both miss the cut for this story but their Ferrari-esque shapes show the elegance that could have been achieved with the sedan.

Once the second largest car maker in Italy, Lancia struggled financially and was taken over by Fiat in 1969. The brand’s fate within the Stellantis conglomerate is unknown.

Had the Consul’s styling theme been accepted for the US Falcon—and it was seriously considered—automotive history would have been very different. The reverse rear window design theme was based on an early 1950s Ford concept car called the D-528 and also found its way onto the 1959 Ford Anglia and some Mercurys and Lincolns.

Whilst the reverse window looked great on the Anglia it appeared cartoonish on the Consul. When the cheaper Cortina arrived in 1962 very few saw a reason to buy the similar sized and more expensive Consul. The two-door hardtop coupe was better looking than the Consul sedan, resembling a smaller version of the 1960 Galaxie Starliner. 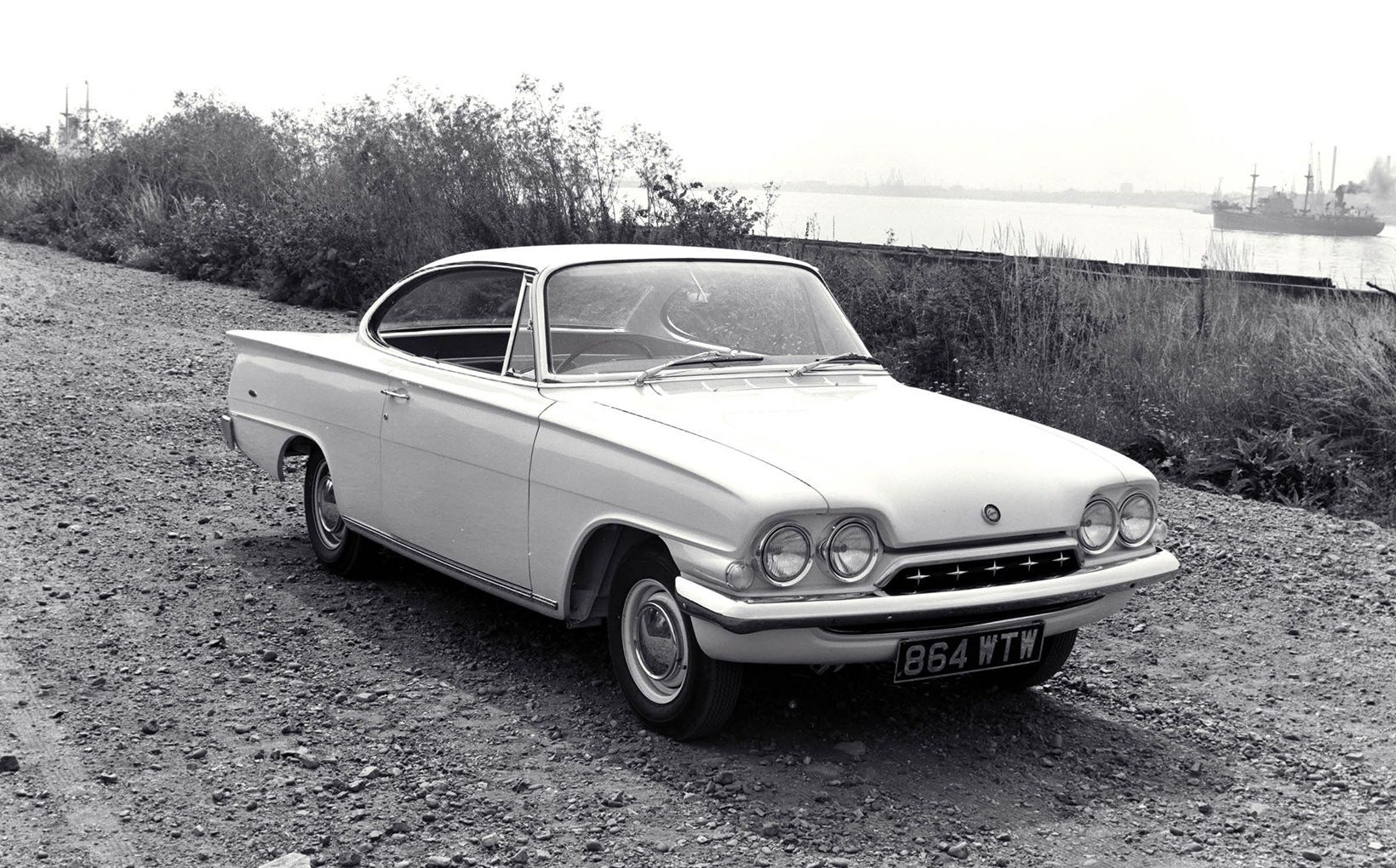 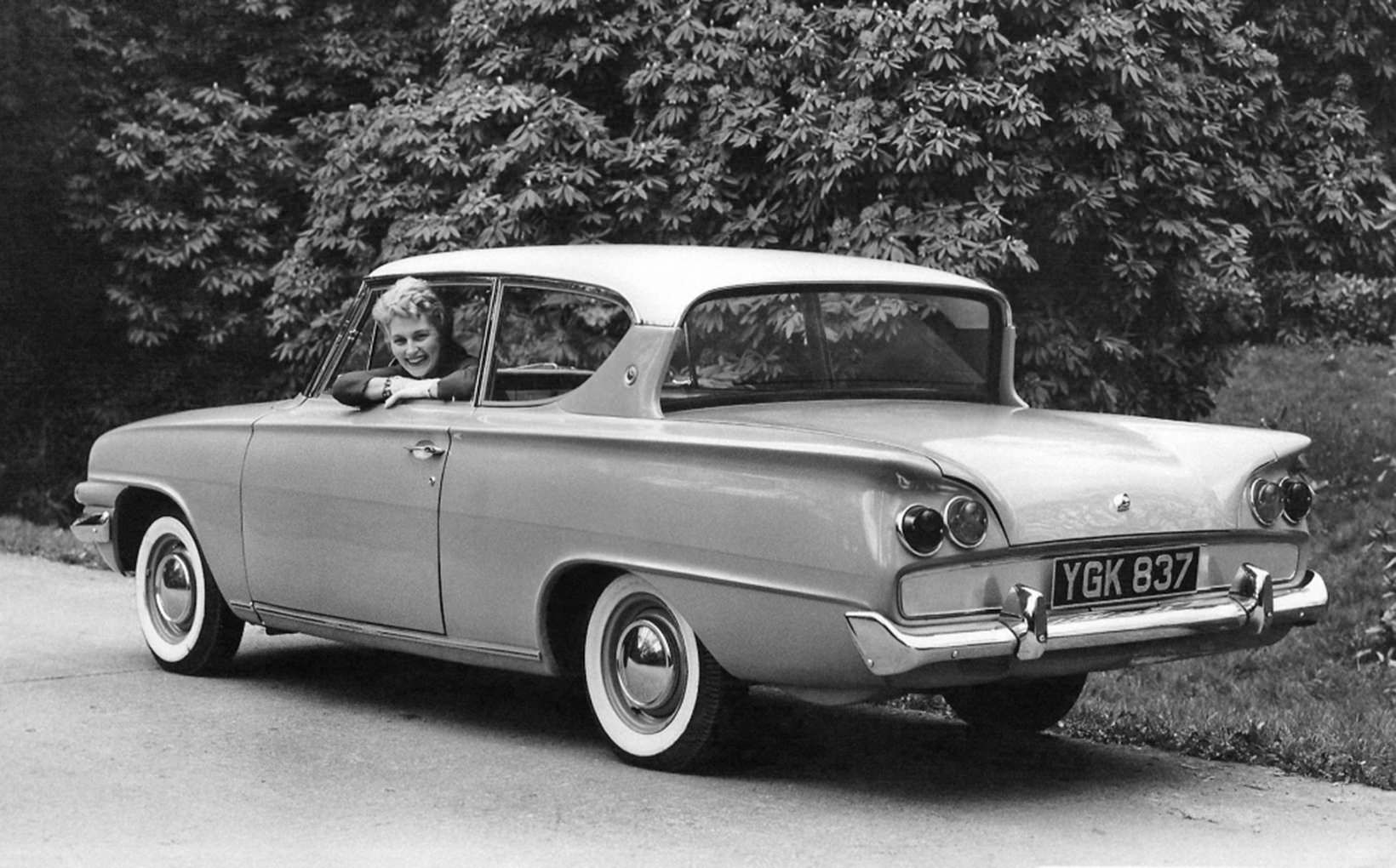 The Consul Classic featured variable-speed wipers and a headlight flasher stalk, advanced items in 1961. By comparison, Holden was boasting about its “new” EK having one speed electric wipers, instead of vacuum operated units.
Photos: © Ford Media

The Mark X is one of Jaguar’s most overlooked models and one of my favourites. Its unitary construction allowed for a lower profile than its predecessors. The shape predicted future generations of Jaguar. Fully independent rear suspension combined with E-Type running gear and four-wheel disc brakes resulted in good handling for such a big car.

And big it was, with dimensions similar to a 1961 Chevrolet Impala. The interior was swathed in rich leather hides and lacquered timber. Folding picnic tables front and rear allowed the gentry to nibble canapes and sip sherry while being whisked to the country estate for the weekend. 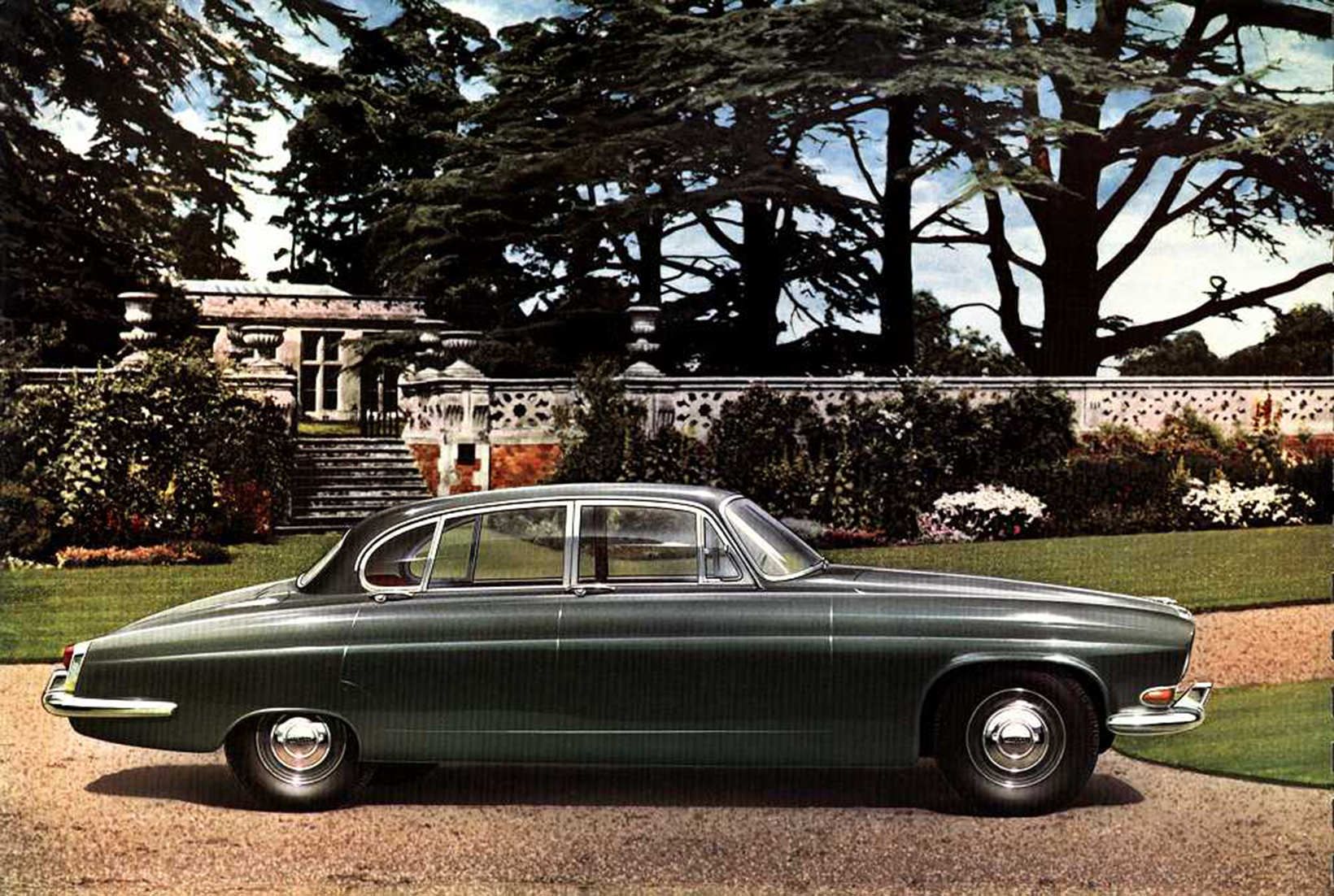 Few good examples of the Mark 10 survive these days. The independent rear suspension has been a favourite of hot rodders. Photo: © Tata Motors

Rootes’ Hillman Super Minx and Singer Vogue twins are more examples of overlooked classics. They are simple, robust and well-built family cars, which sold at slightly higher prices to comparable products from Vauxhall, Ford and BMC, but retained a loyal customer base because of those exact qualities.

Exhibiting its badge engineering prowess, Rootes unveiled the Vogue four months ahead of the Super Minx. The Vogue was everything the Minx was, with better fittings, woodgrain inlays and four headlights. 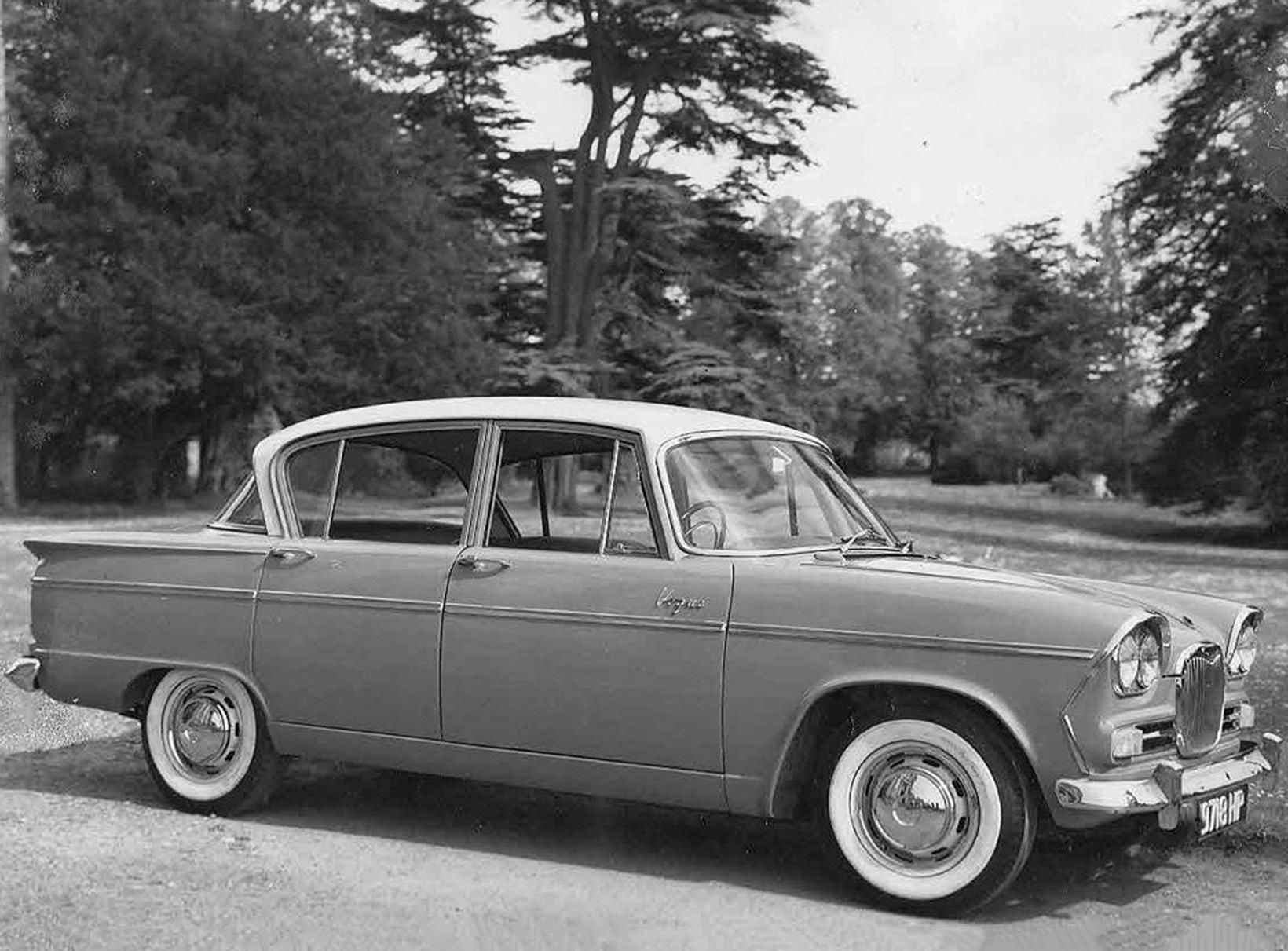 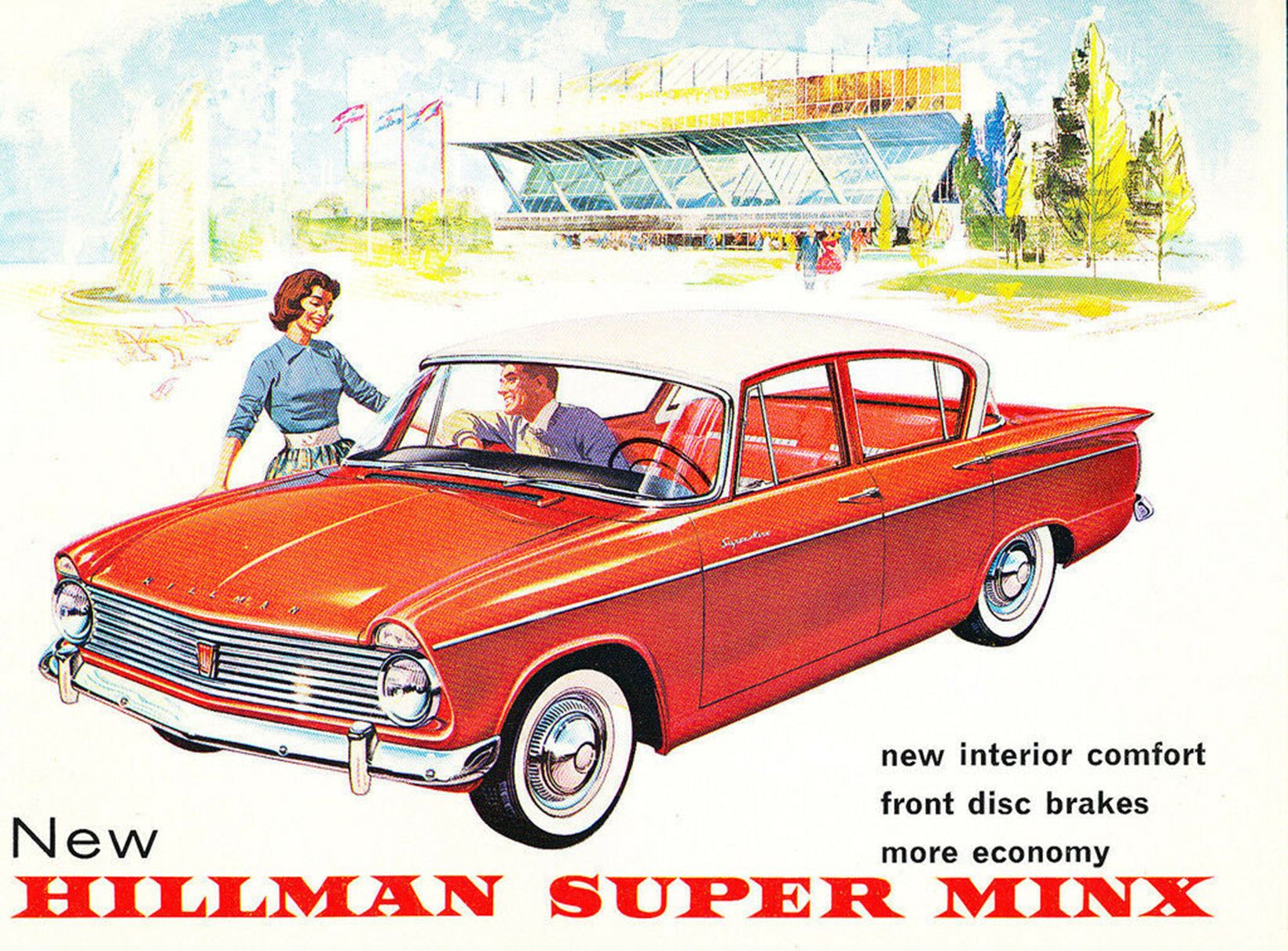 The brochure art work for the Super Minx has been re-drawn for left hand drive markets by moving the steering wheel to the left, leaving the “driver” as a passenger.
Photos: © Stellantis

Planned to replace the smaller Minx and Gazelle, which dated back to 1956, the Super Minx and Vogue were upsized during development. Whether this was by intent or just happened, has never really been answered. Anyway, the outcome gave Rootes two mid-sized models to offer families who were venturing out onto the UK’s new multi-lane high speed motorways and needed pace and space.

Many consider the E-type to be one of most beautiful cars ever made. I’m not one of them. For me it-has design themes that GM’s legendary design boss, Harley Earl, might have enjoyed: doughy rounded fenders, high curved roof line and wraparound windscreen. Its track is narrow too, giving the car a tip-toe appearance. And then there’s its resemblance to the 1952 Alfa Romeo Disco Volante and 1954 GM Motorama Corvette Corvair dream car. I’m sure Shannons Club members will have firm views on all of this. 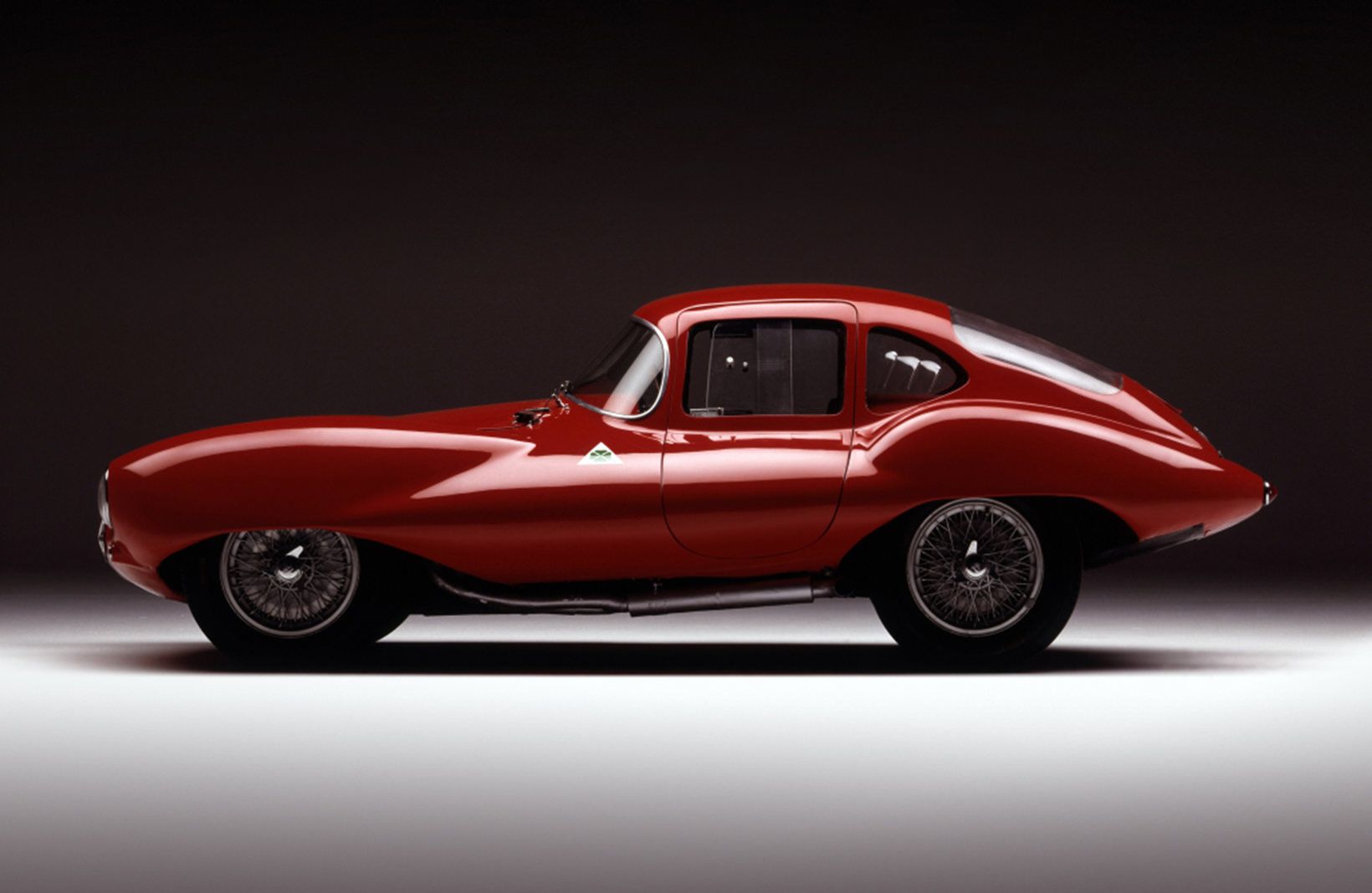 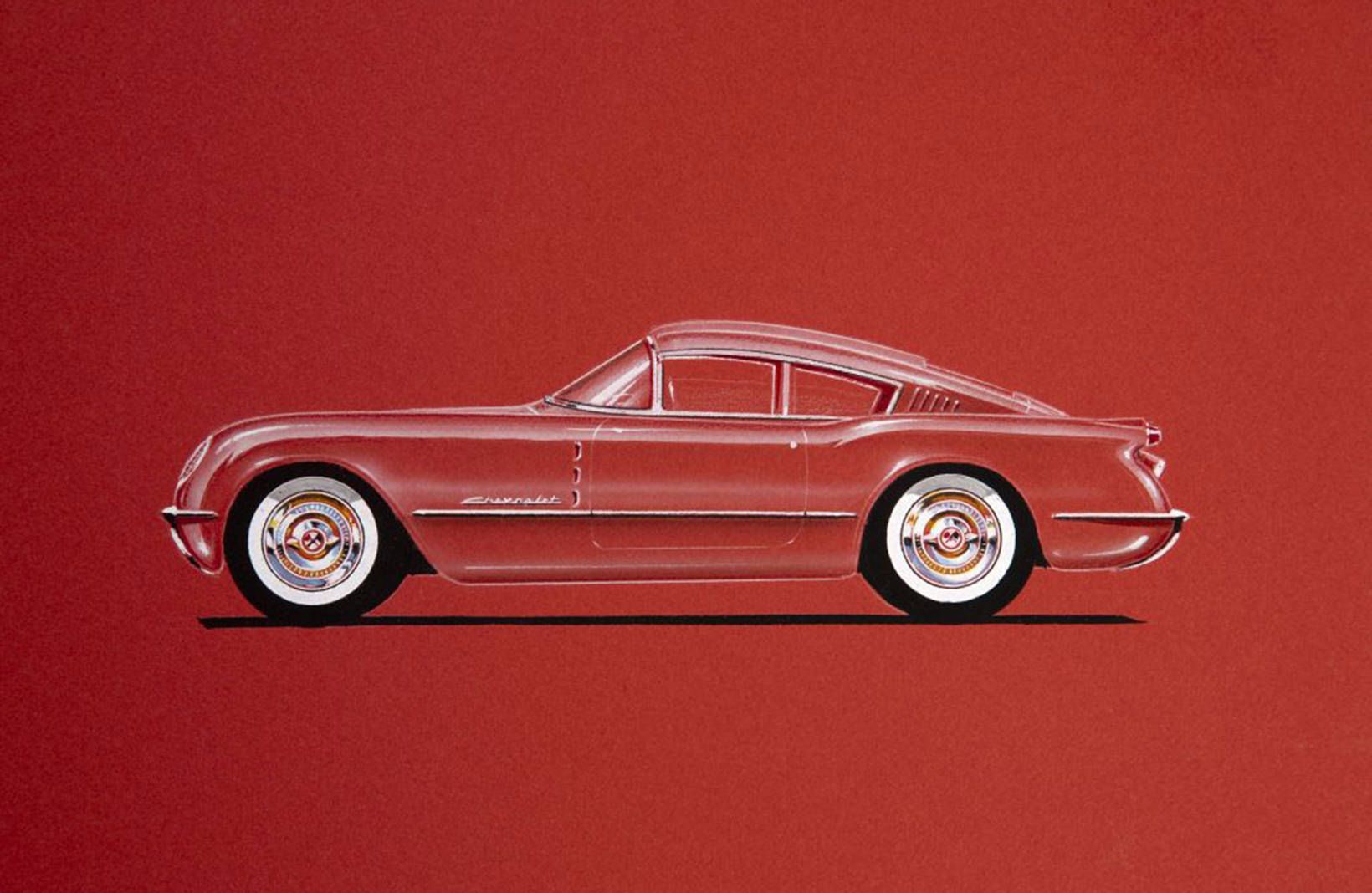 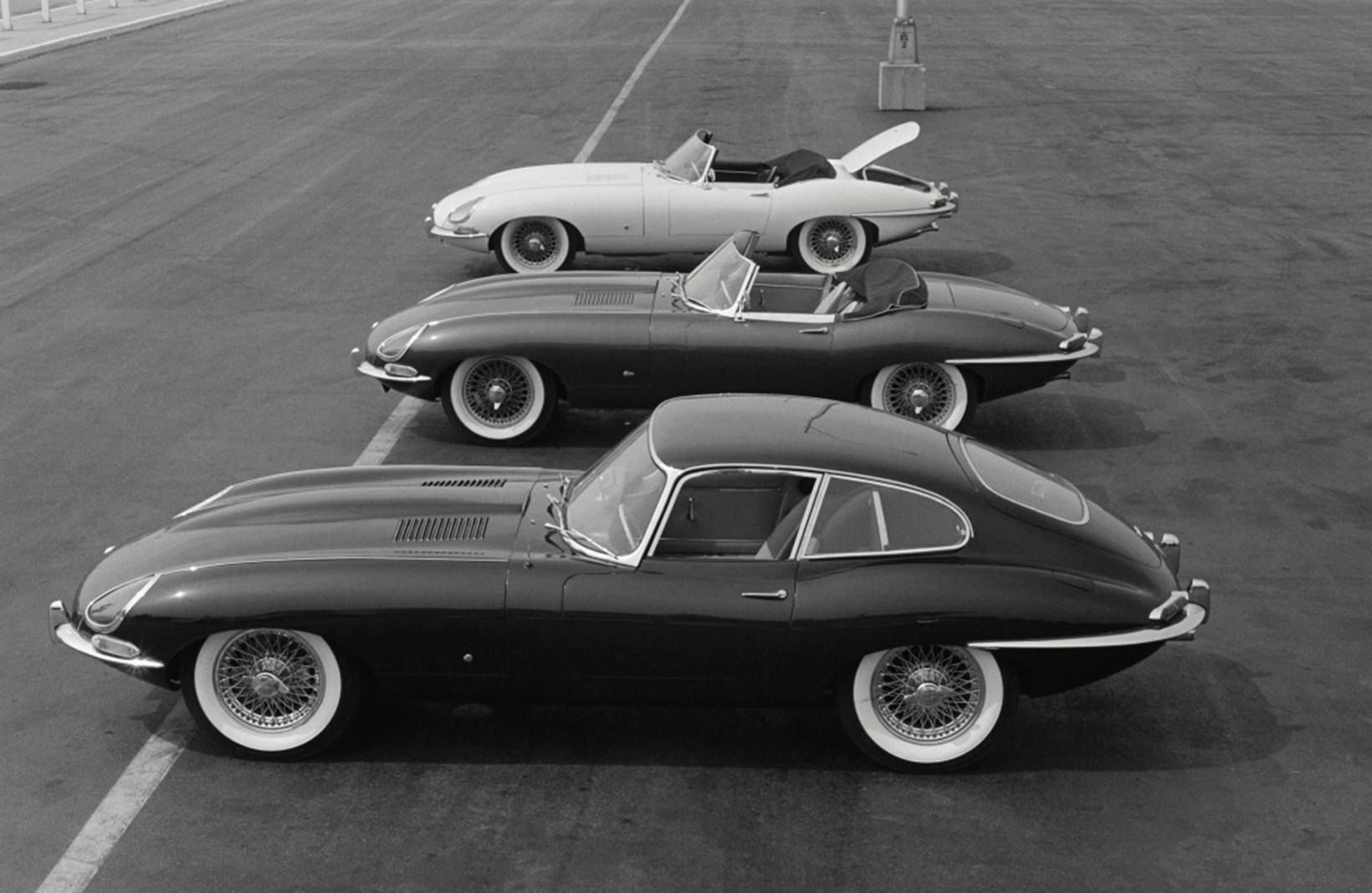 Draw your own conclusions about the design influences on the E-type.
Photos: © Stellantis, © GM Media and © Tata Motors

The styling was a divided effort. The Healey gang shaped the sheet metal ahead of the doors. The back half was given to the designers at BMC.

So, how to tell them apart? The badges and name plates differ. The MG’s grille has vertical bars. The Sprite has a cross-hatched design. The Midget was priced higher because it had more gauges, better interior trim and some extra chrome trim.

Around 355,000 Midget /Sprites were sold in total. The MG outsold the Healey by two to one. The Sprite was terminated in 1971. The Midget carried on until 1980. 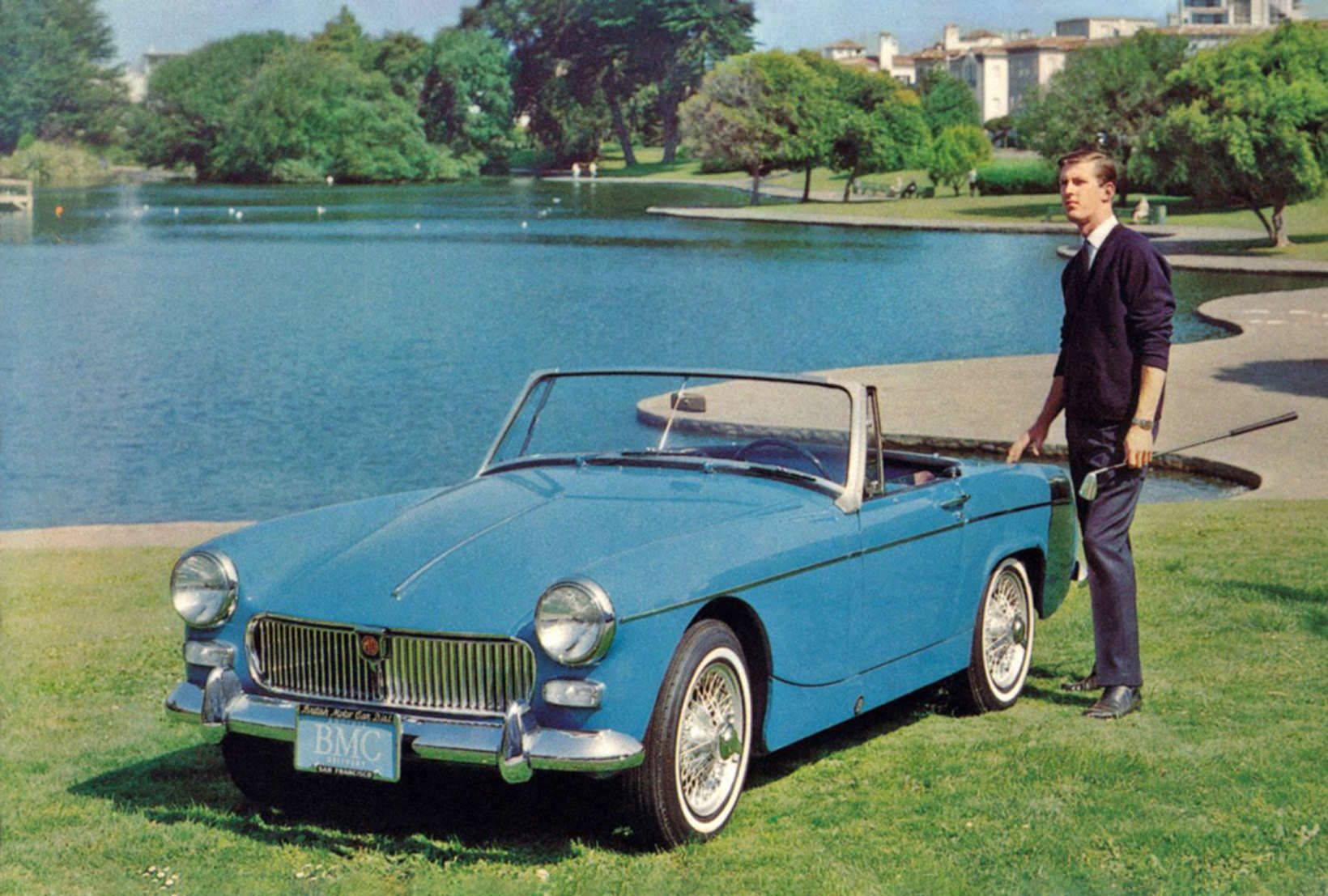 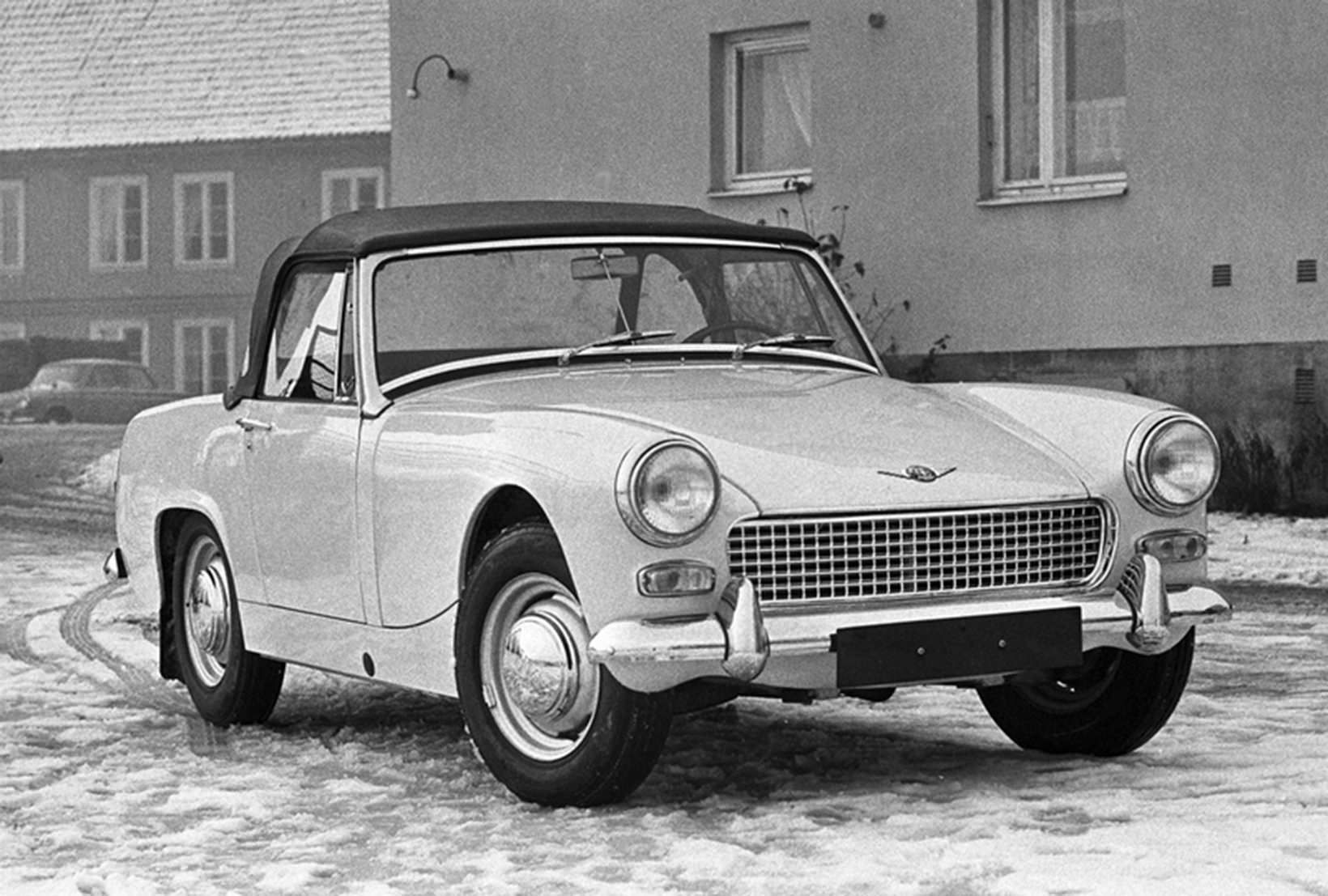 It’s a sunny day, so it is off to a round of golf in the MG Midget for this preppy looking chap. Looks like a seven iron in his hand. America was a big market for the MG and Austin Healey brands, hence the left-hand drive cars in the photos.

The all-new TR4 was styled by Giovanni Micholetti. It boasted a 2.1 litre four-cylinder engine producing 100 bhp.

An expensive option was a hardtop roof consisting of an aluminium frame with a fixed rear window, a detachable metal roof panel and a simple soft-top for emergency use when the metal roof panel was removed. The soft top part was called the “Surrey” top. All the sources I’ve consulted reckon the idea was first seen on the 1958 Fiat Wonderful, built by Vignale and also styled by Micholetti. 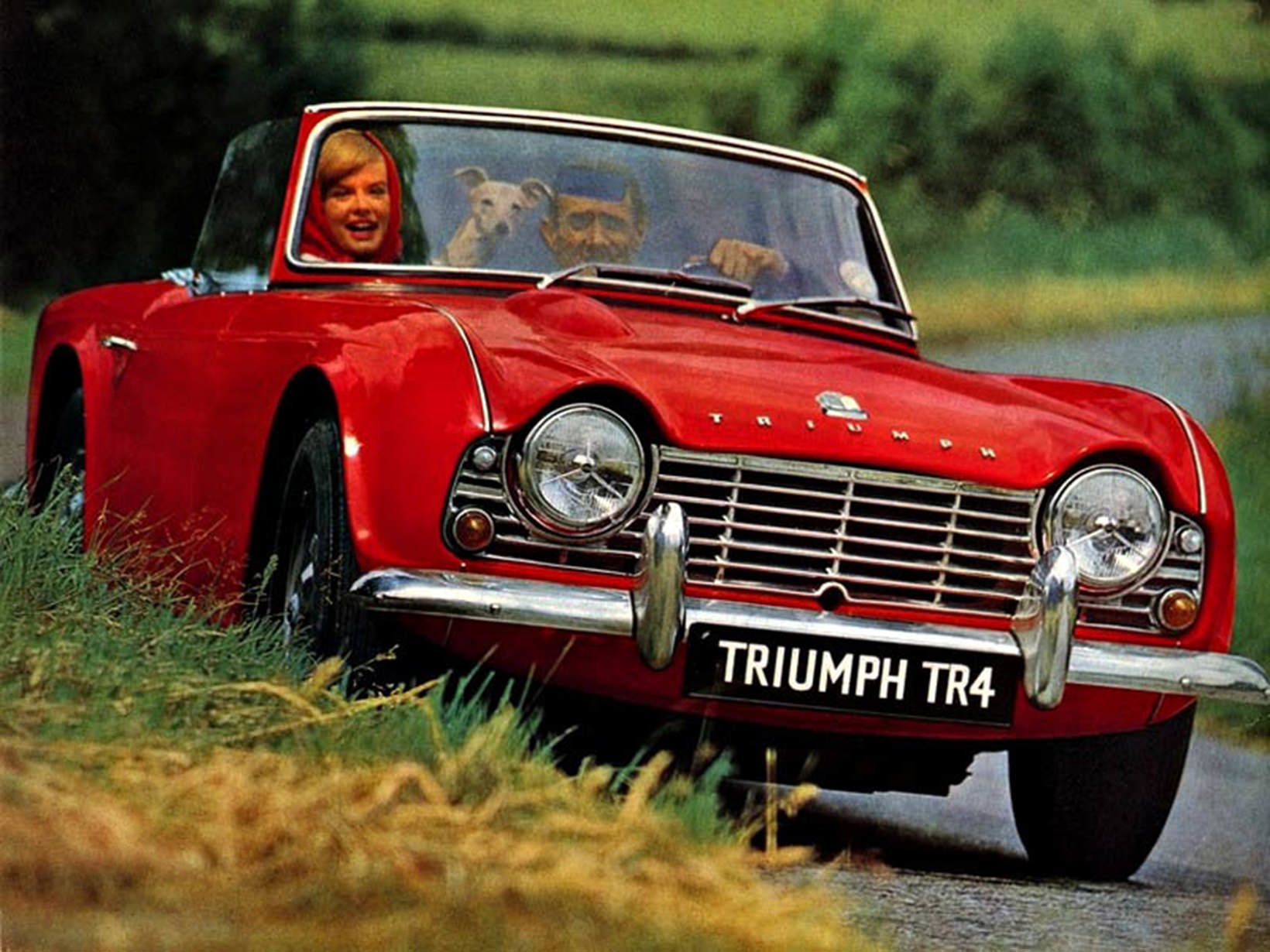 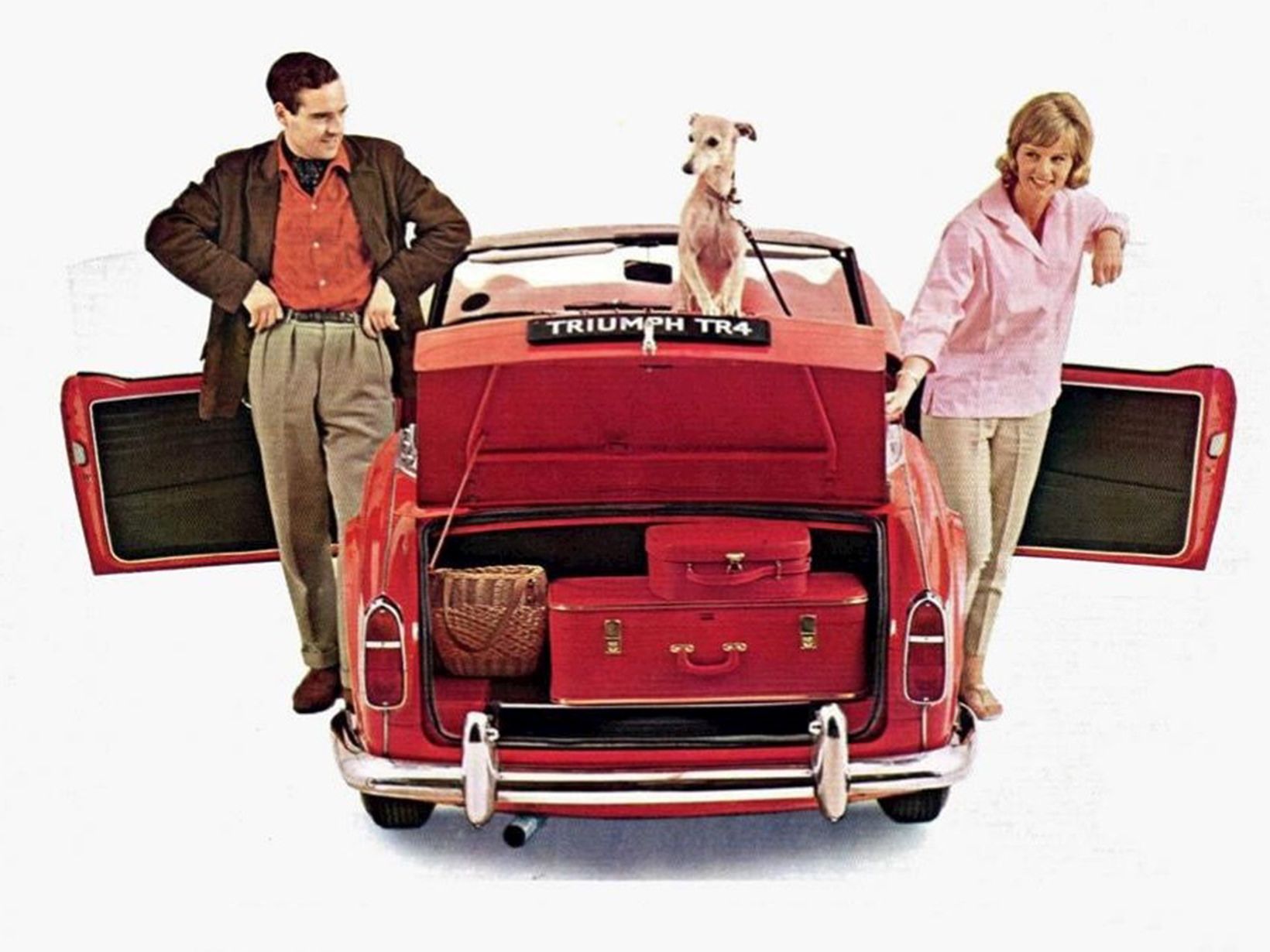 The vast majority of the 40,000 TR4s that were built went to the USA. These photos are from the Dutch brochure.

The Type 3 might have sat on the underpinnings of the Beetle, but it was longer, lower, wider and larger. Above all, it was a modern “three box” shape and appealed to a significantly wider market than the aging and rounded Beetle.

Only the two-door sedan was available at the launch. The station wagon and fastback appeared later. VW’s engine was shrunk to a suitcase-sized horizontal “underfloor” package. This left room for a “boot” above. The wider body incorporated the Beetle’s old fashioned running boards and separate fenders. It all created a much larger passenger and luggage area. Around 2.6 million Type 3s were sold. It remained in production until 1973. 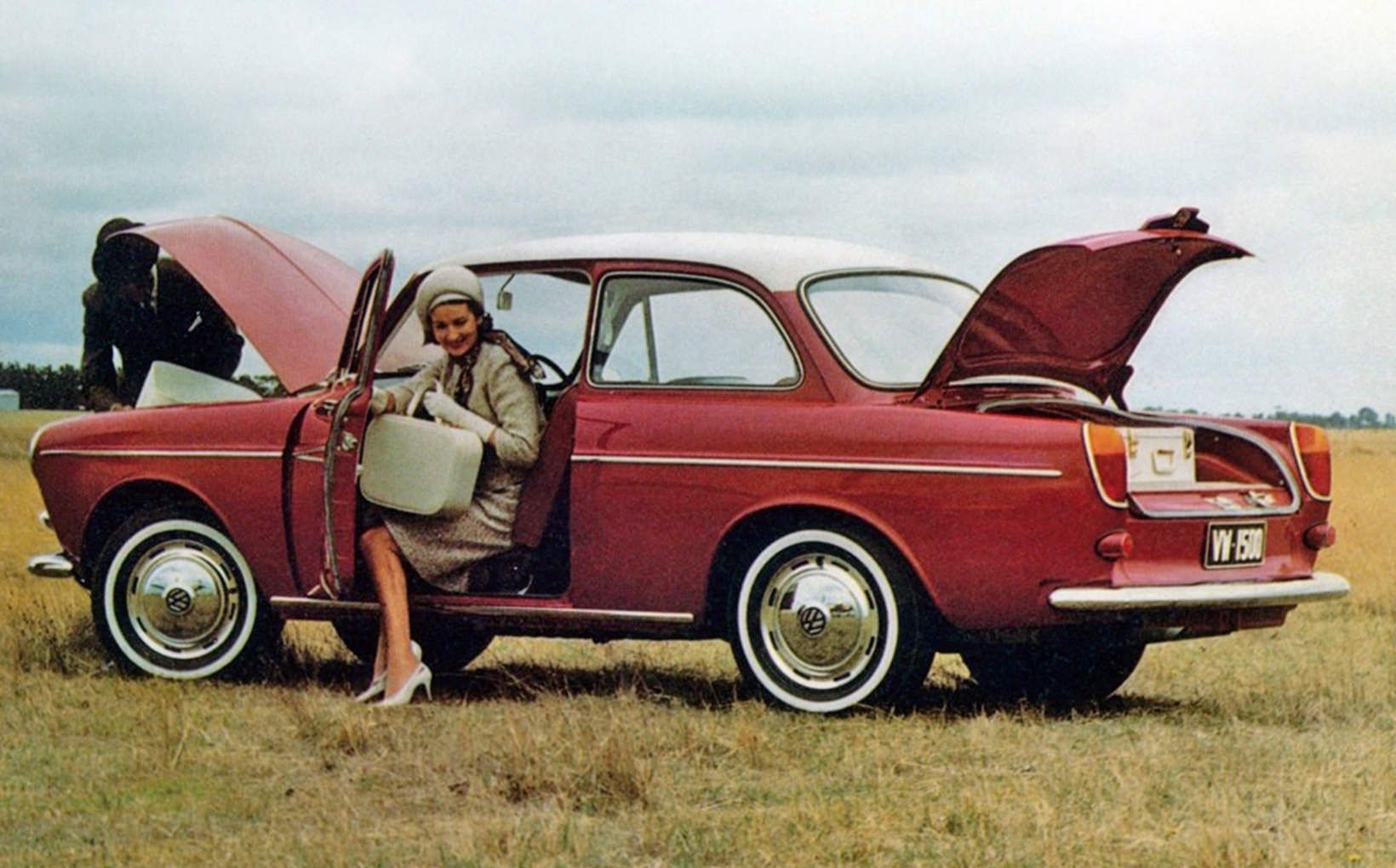 And what was the message that VW’s advertising agency were attempting to convey to potential buyers by having this couple unloading their right-hand drive Type 3 in the middle of a field?

Conceived in Sweden, designed in Italy, unveiled in Brussels, built in Britain and a huge success in the USA, that’s Volvo’s P1800. Styled by Pelle Petersen it was originally planned to have the P1800 constructed by Karmen, but they backed out of the deal to preserve their VW contract. Volvo then selected Pressed Steel in the UK to make the bodies and final assembly was given to Jensen. Volvo took over in 1963 to ensure product quality. 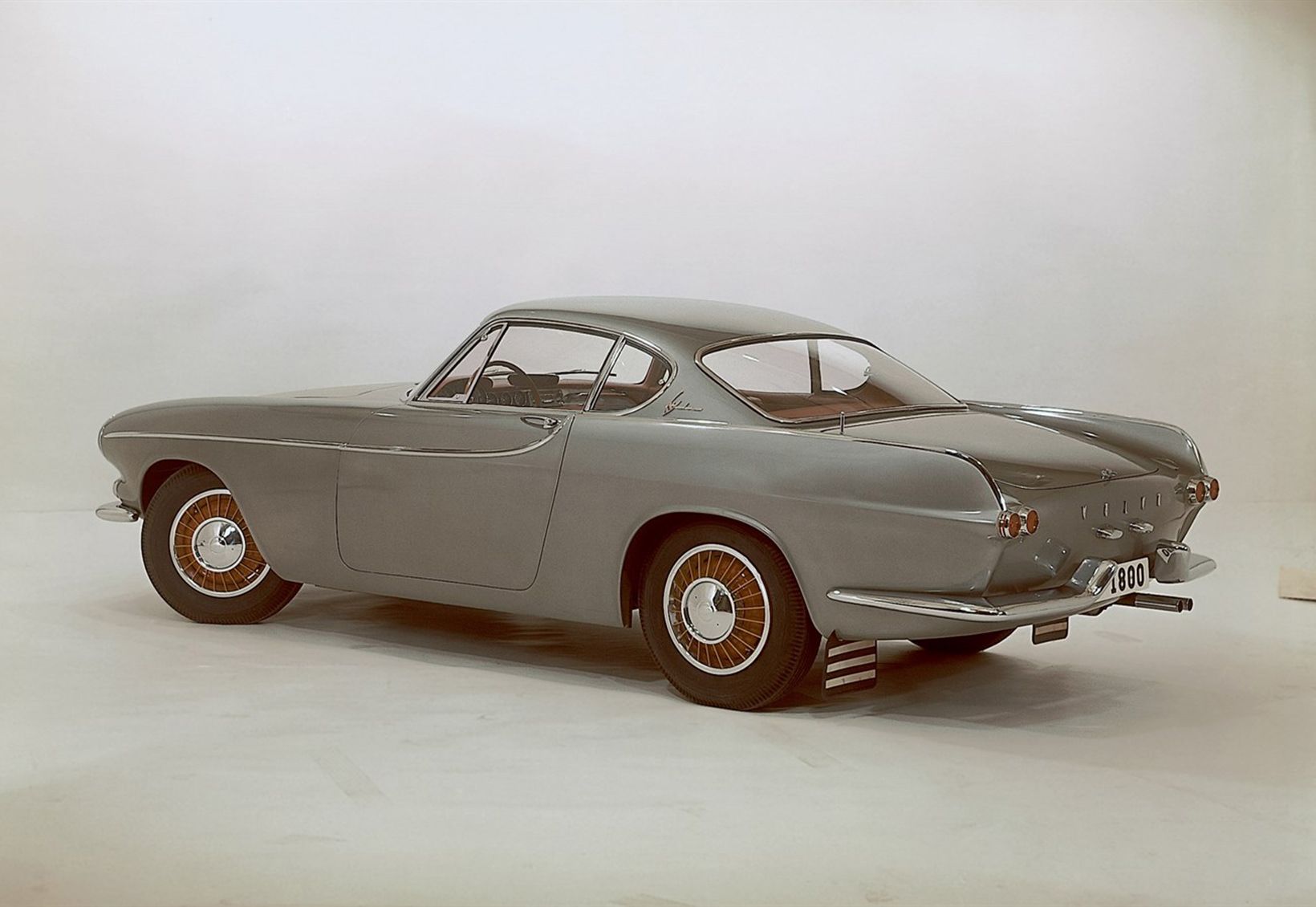 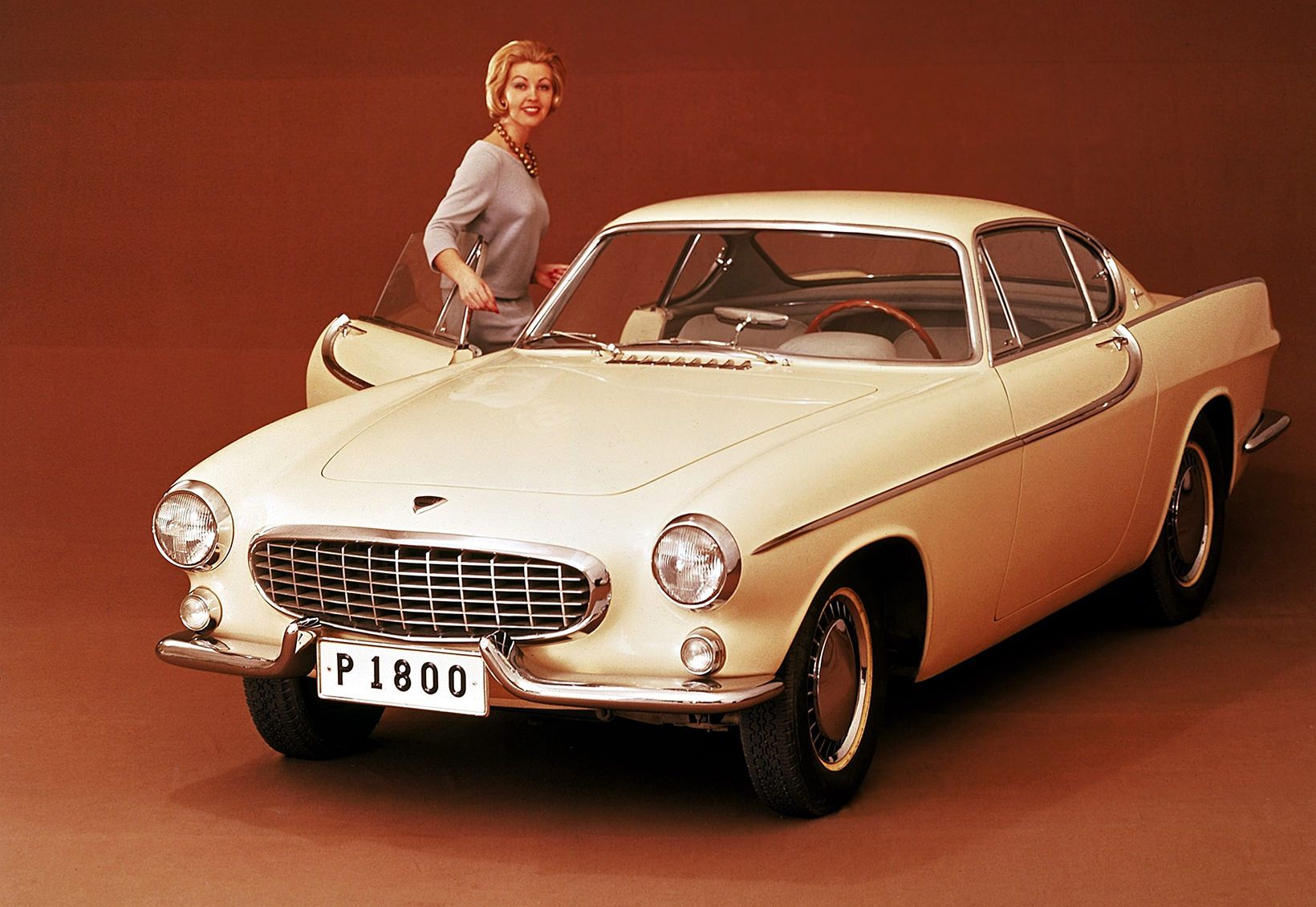 It has been 60 years since the P1800 was launched and Pelle Petersen’s styling still retains its timeless quality. Production ended in 1973 after 47,500 had been built.
Photos: © Volvo Car.

In the next edition of Retroautos I celebrate the remarkable cars of 1961 from Japan and the USA. Retroautos is published with passion and with pride by David Burrell.