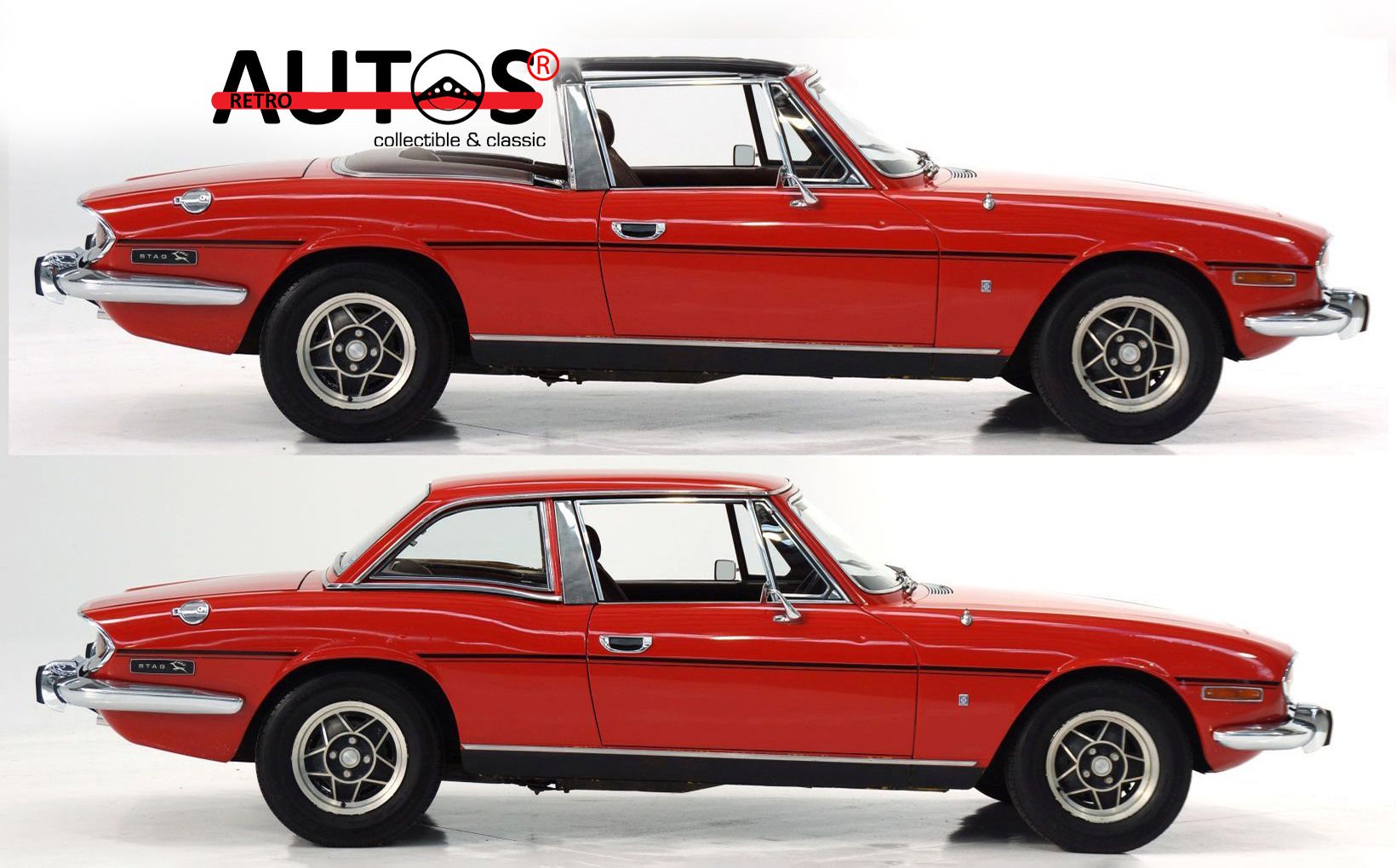 Go to any All-British classic car show and the sports cars you will inevitably see are the MGB, Triumph Stag, Triumph TR3 and TR4, MG Midget and Austin Healey.

Now, which one is claimed to have the highest survival rate?

It’s the Stag! Surprised? Yep, me too. Depending on the source of the information the survival rate for Stags in the UK is 44 %. In Australia the Stag survival rate is a remarkable 55.7%.

To put that into perspective the Ford Capri has a less than one percent UK survival rate. The MGB is also in single digit numbers. 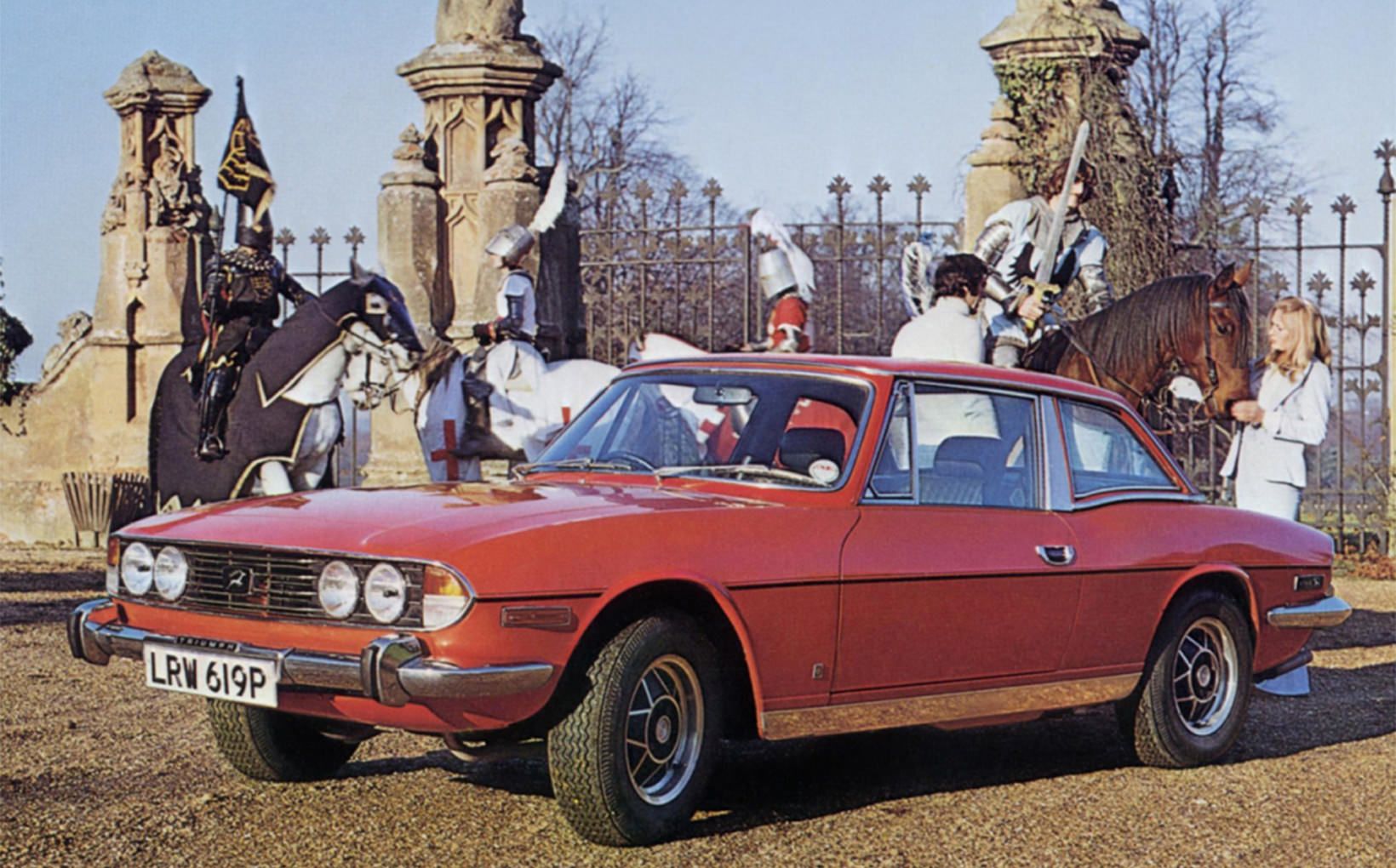 This advertising photo of the Stag places at the centre of knights of the realm, horses, young people milling around in front of the gates of a county estate in an attempt to convey a British “upper class” image.

The car’s champion was Harry Webster, Standard-Triumph’s director of engineering and development. It was styled by Giovanni Michelotti who had worked on numerous Triumph models including the Herald, Spitfire, Dolomite, 2000/2500, TR4 and TR5.

The idea for the Stag began as a one-off show car for the 1966 Geneva Auto Show. Webster and his fellow directors liked it so much they decided to put it into production. It was never seen at the auto show.

The original intention was for it to be a stylish upmarket sports tourer, competing against the Mercedes SL and Porsche 911. 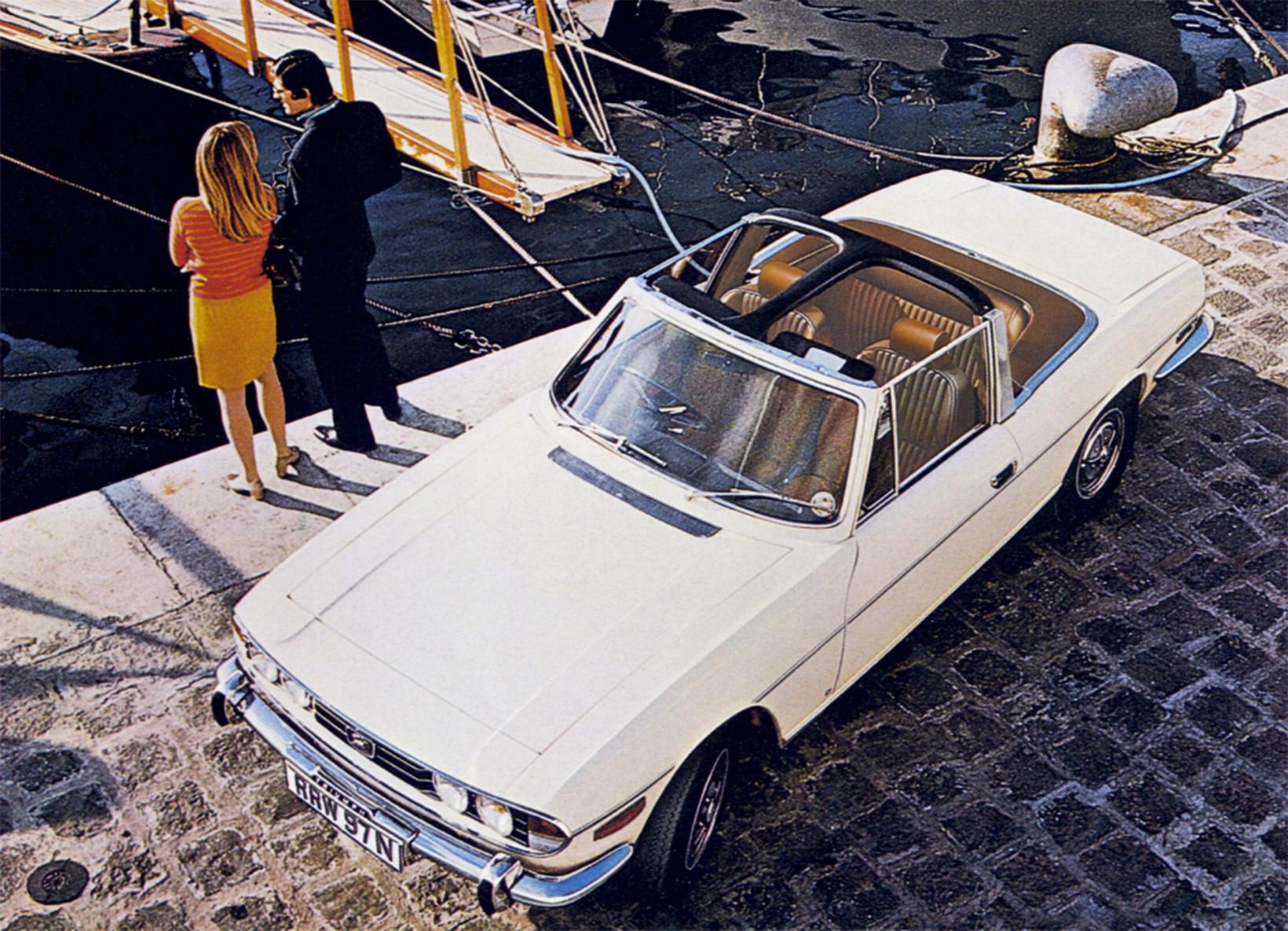 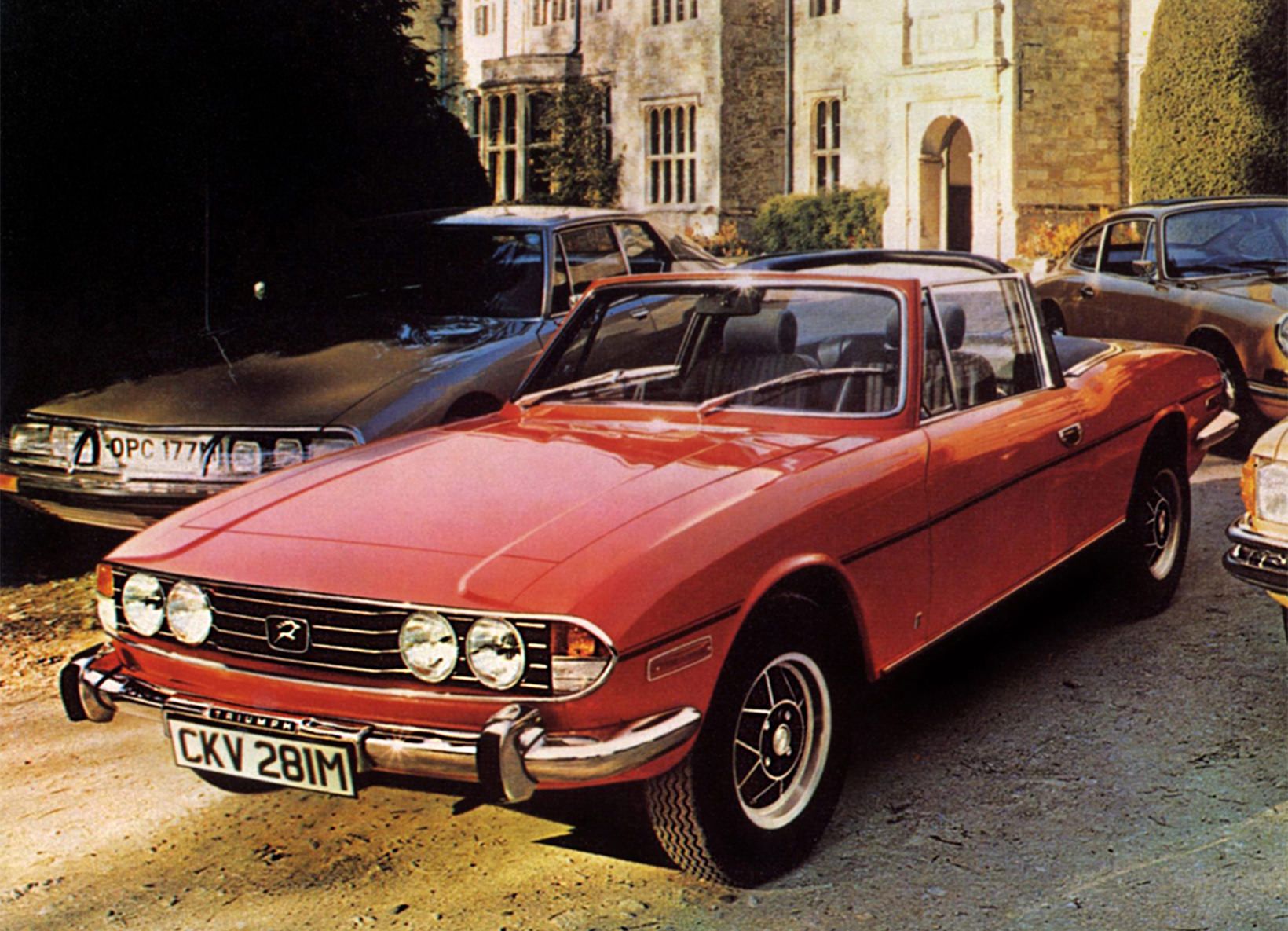 The overhead photo shows the roll bar that was needed to ensure the rigidity of the Stag. It became one of its trademark design features. Meanwhile, a bright red Stag is positioned among its intended competitors, each of which is painted in various shades of brown and half in shadow. Not by accident, I suspect.

I could bore you with the long-involved story of the Stag’s development, the missed launch deadlines, corporate infighting and financial issues which saw its release pushed out two years, but it has already been chronicled elsewhere, many times.

Then there are the well-known mechanical issues after it was released. The list of problems includes overheating caused by water pump failure, head-gasket failures, valve and piston damage, timing chain problems, engine block warping….and so on.

These problems were never properly resolved and the Stag quickly gained a reputation for poor quality which has been amplified for decades in print and online media.

So, why is the Stag so popular among classic car aficionados? Why does it have such a high survival rate, given all of its issues? 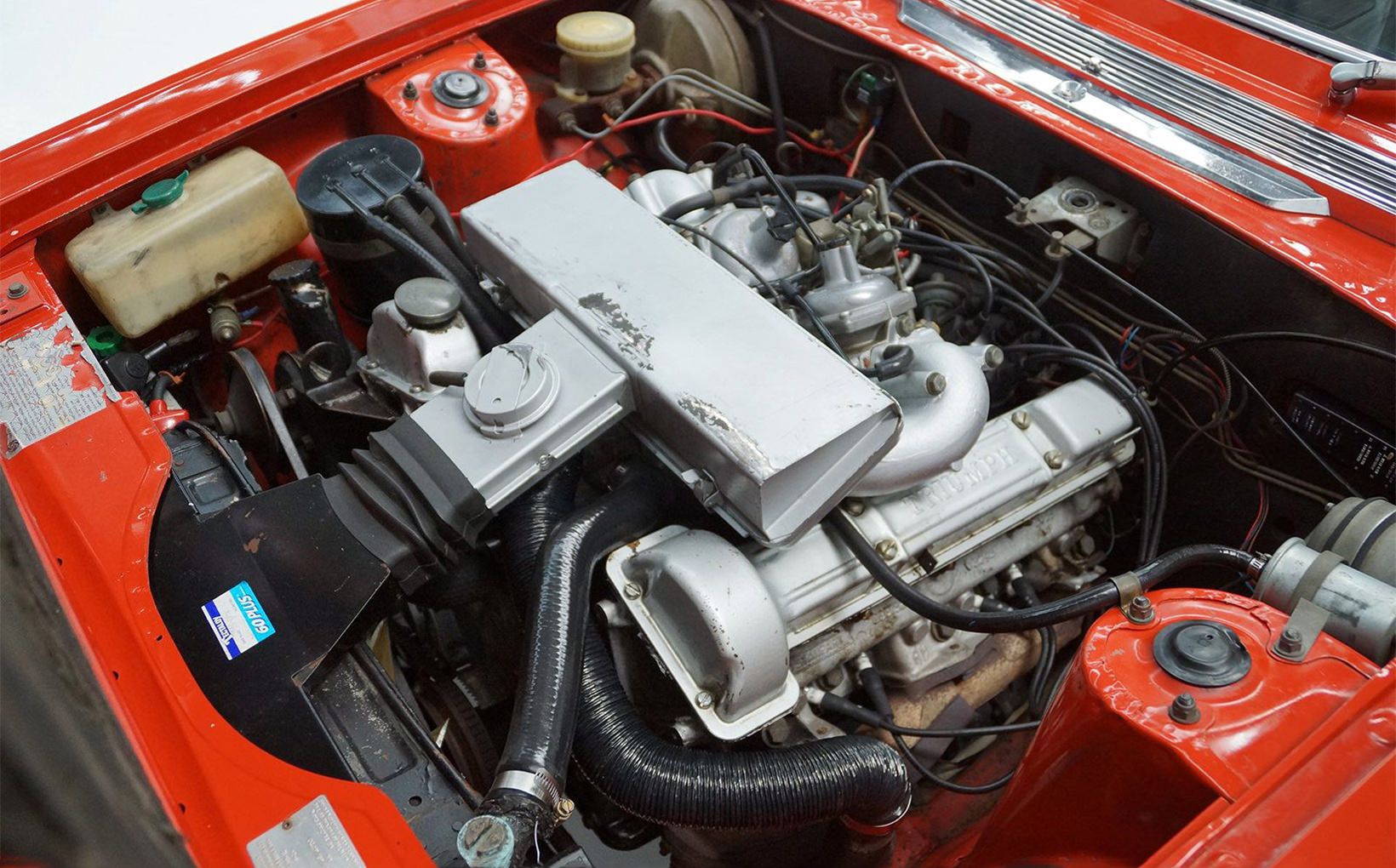 Debate still surrounds the decision of Triumph to develop its own V8 when the Rover V8 was available.

Rather than repeat what’s been already written in classic car magazines, I decided to go to someone who has an association with Stags.

This is where John Powell enters the story. John is a member of the Sun Country Historic Vehicle and Machinery Club and he is the editor of the club’s magazine. He is also a member of the Triumph Car Club of Victoria. In 2018 John started the Australian Stag Register.

John knows all of the problems with the Stag, but he takes a wide perspective about the situation. “It has a touch of Italian glamour, V8 power, the ability to carry four people and provide wind-in-the-hair motoring. What’s not to like?” he says.

And about the well-known problems? Well, that’s the good bit. As John confirms “they are all well-known with sometimes easy and relatively quick fixes.” 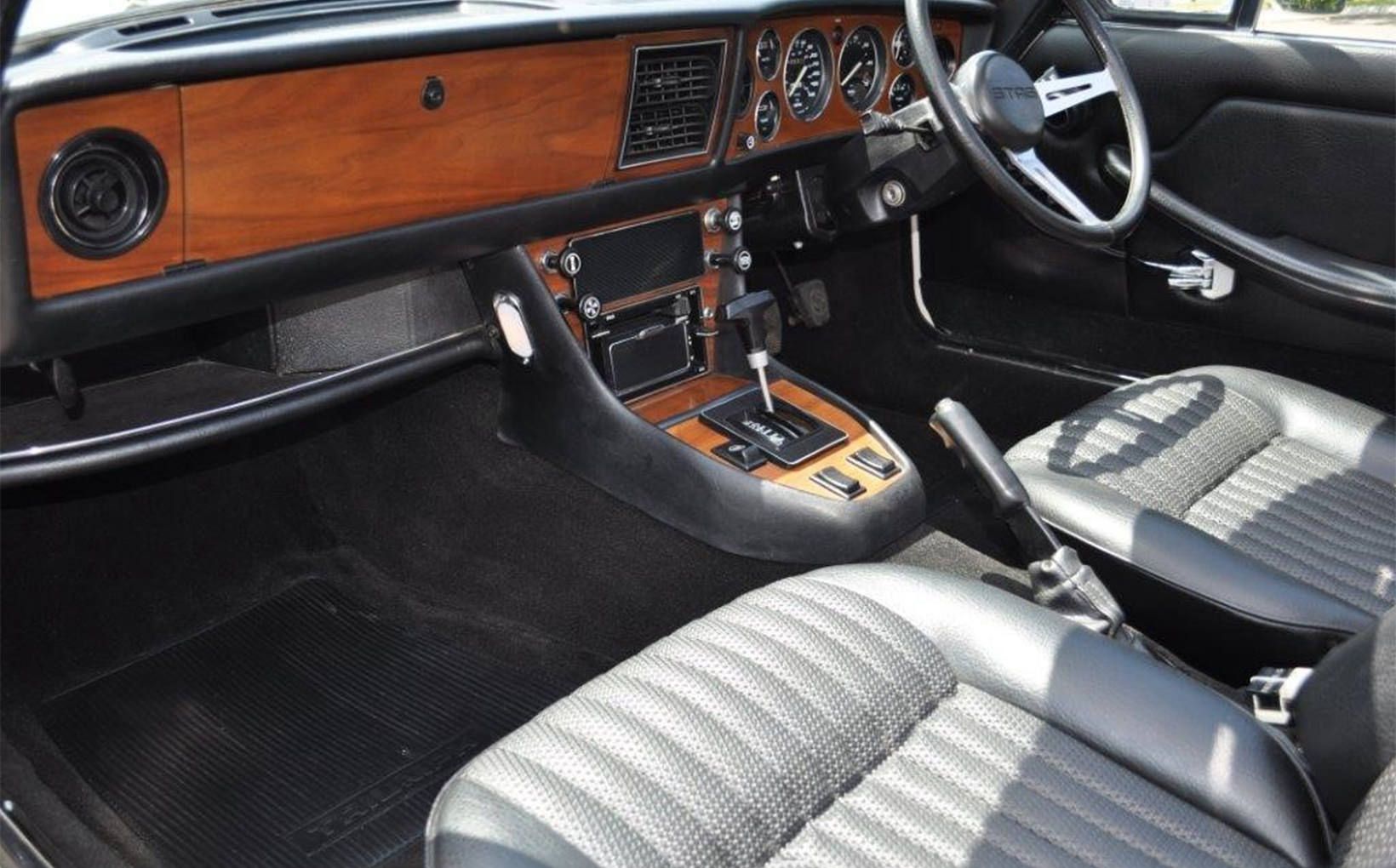 John began to compile a register of Stags in Australia, because, as he says, “a friend of mine was running the Triumph Stag Forum. Many members of the Forum wanted a ‘Register’, so I took it upon myself to do it.”

The Register has now evolved into one of the most comprehensive data bases of any classic marque in Australia. In compiling this information John has received extensive help from Stag owners and fans of the car but very little assistance from those who work in our nation’s transport departments.

“To cut a long story short”, he says,” I started with known Stags, then searched every resource I could find. About two years ago I broadened my scope by contacting each State’s department of transport. Despite many emails and letters, most were not interested in responding to me.

“Then with advice from my friend, I applied through the Freedom of Information regulations to each State Government Transport Department.”

The results were mixed. Here’s how John summarises his efforts. “Tasmania supplied current listings with engine number only. Western Australia supplied a list of currently registered Stags but could not supply information about cars registered prior to computerisation, which occurred in the 1980s. They could not tell me about cars with personalised plates. South Australia would only provide information by colour, such as 25 white ones, 13 yellow etc. Victoria was a mixed bag of both personal, historic and normal rego but no previous history. Queensland supplied a huge listing of current and historic registrations which took a week to sort through. New South Wales handed over massive list exceeding one thousand cars.” 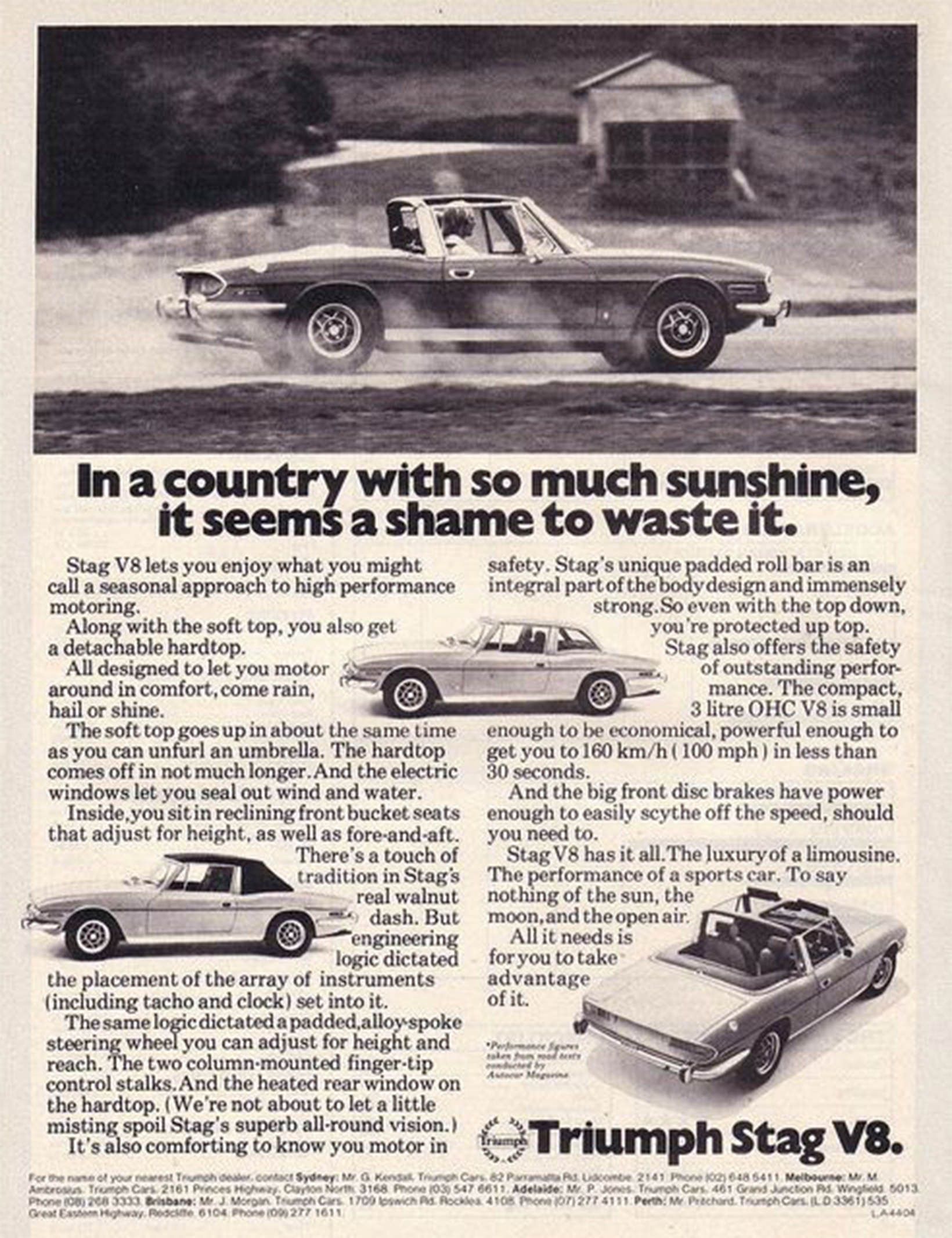 An Australian advertisement for the Stag. It claims the car will accelerate from zero to 160kmh in less than 30 seconds. Media regulations prevent speed-related boasts these days.

So, what’s the outcome? At this writing, John’s register can account for 890 registered survivors of the 1596 Stags which were sold in Australia from 1973 onward, when they were launched here. That’s a 55.7% survival rate. Further, John has 1,216 cars listed by chassis number. Over 70% are believed to still have their original Triumph V8 in place.

John’s association with the marque began in 2009 when purchased a 1951 MGTD and joined a local classic car club.

“My late wife Elizabeth just loved the MG and the club activities,” he remembers. “So much so, that she sold her modern car and bought a 1960 Morris Minor.” 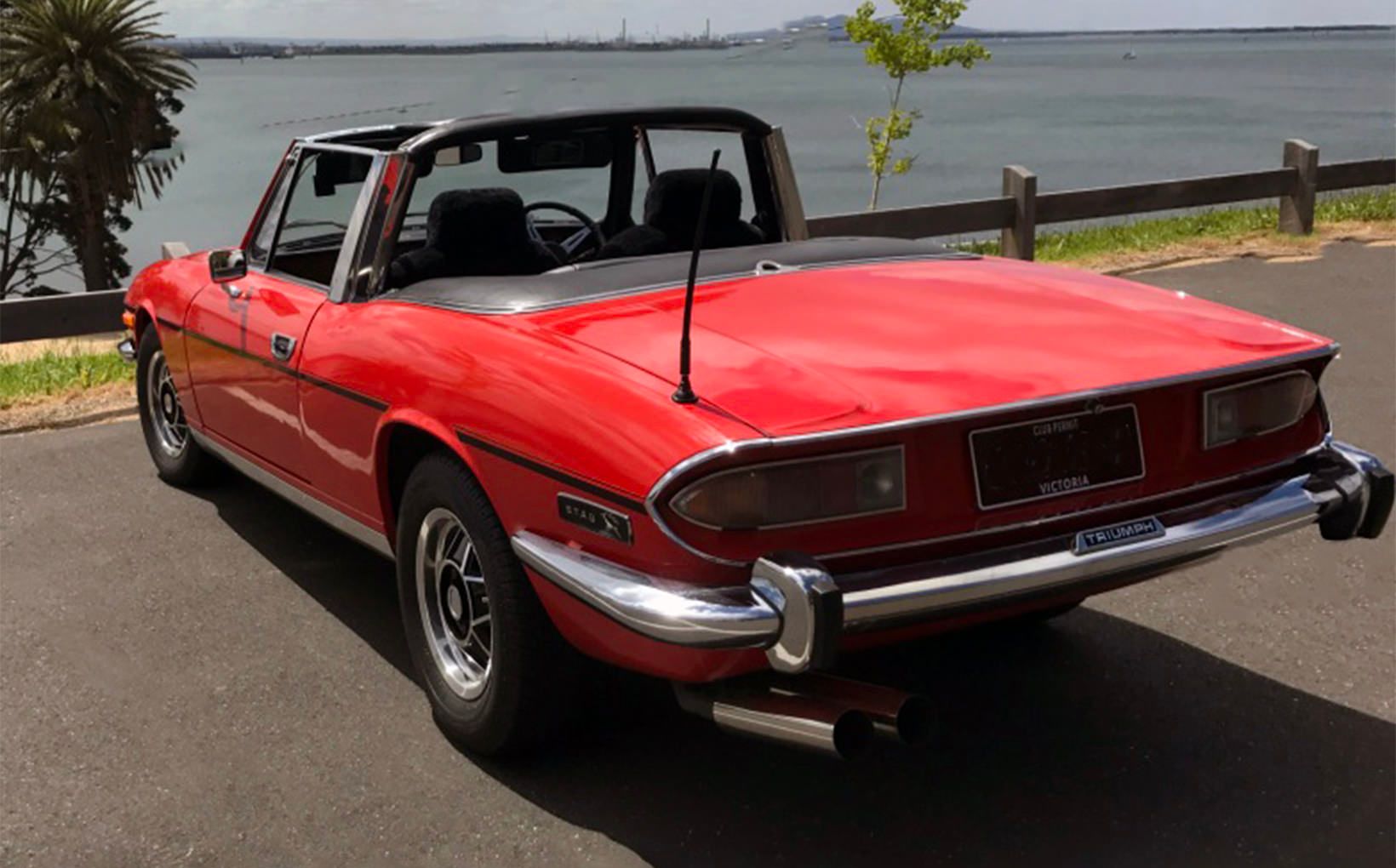 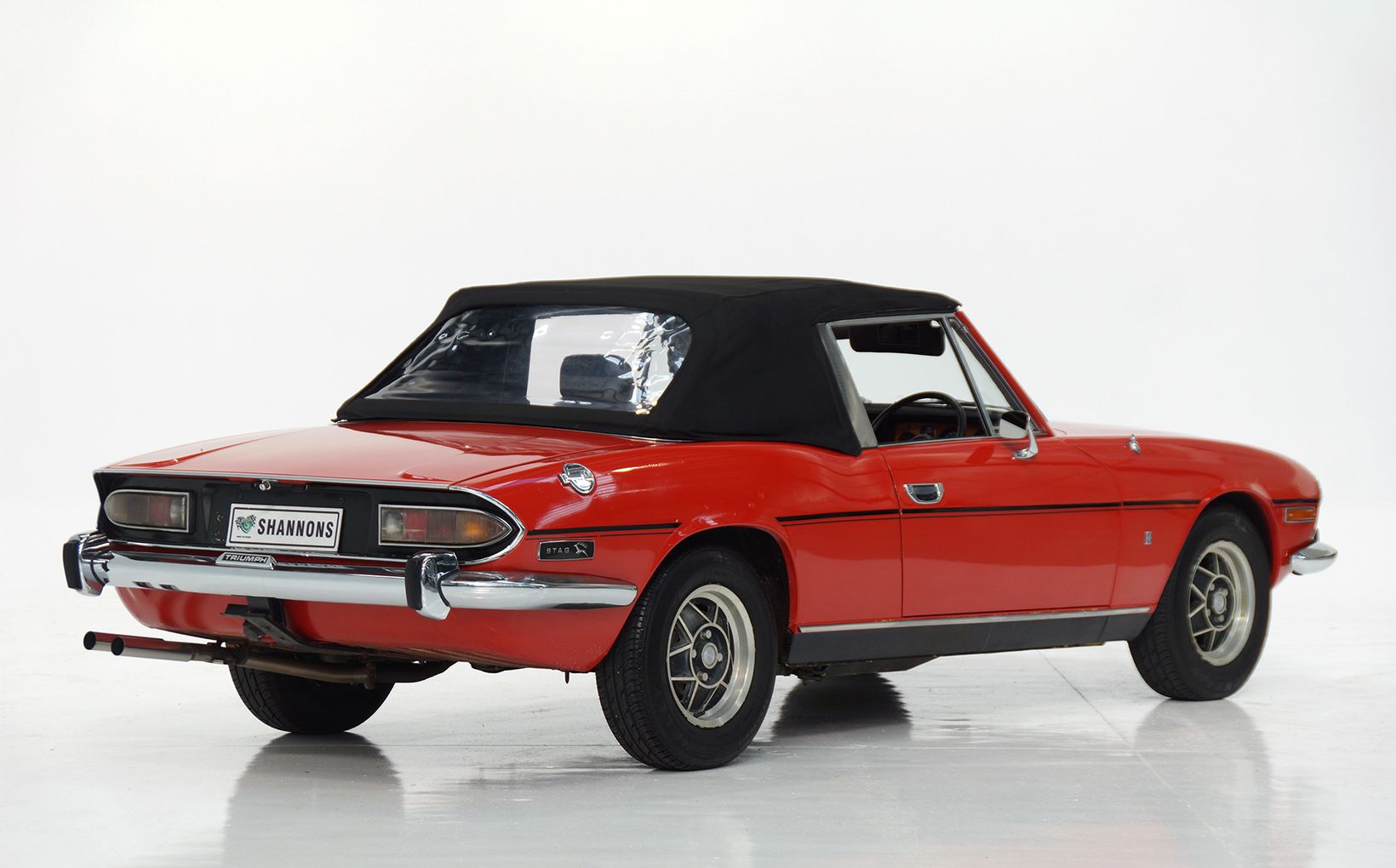 Giovanni Michelotti shaped the Stag. He also had a role in styling the Leyland P76.

“But Liz always wanted a Stag,” he says. “She could not find a good one that was within our budget. After giving up on a Stag search, she purchased a 1986 Alfa Romeo GTV6 that was in excellent condition. It had a heater and air conditioner but there was one problem – it had very wide tyres, wicked negative front wheel camber and no power steering!”

“After a while she sold it and the search was on again for a Stag but we realised that that we needed to raise our budget. More searching and then in 2016 a Stag came up for sale. The photos were small and low resolution so we rang the seller and said we were on our way to see it. That was a 700km round trip!”

John says that the Stag was in “amazing original condition where the only thing needed was to re-paint the front mudguards that had scratches plus the passenger door where it appears that a large square sticker had been taken off and it took the paint top coat off.” 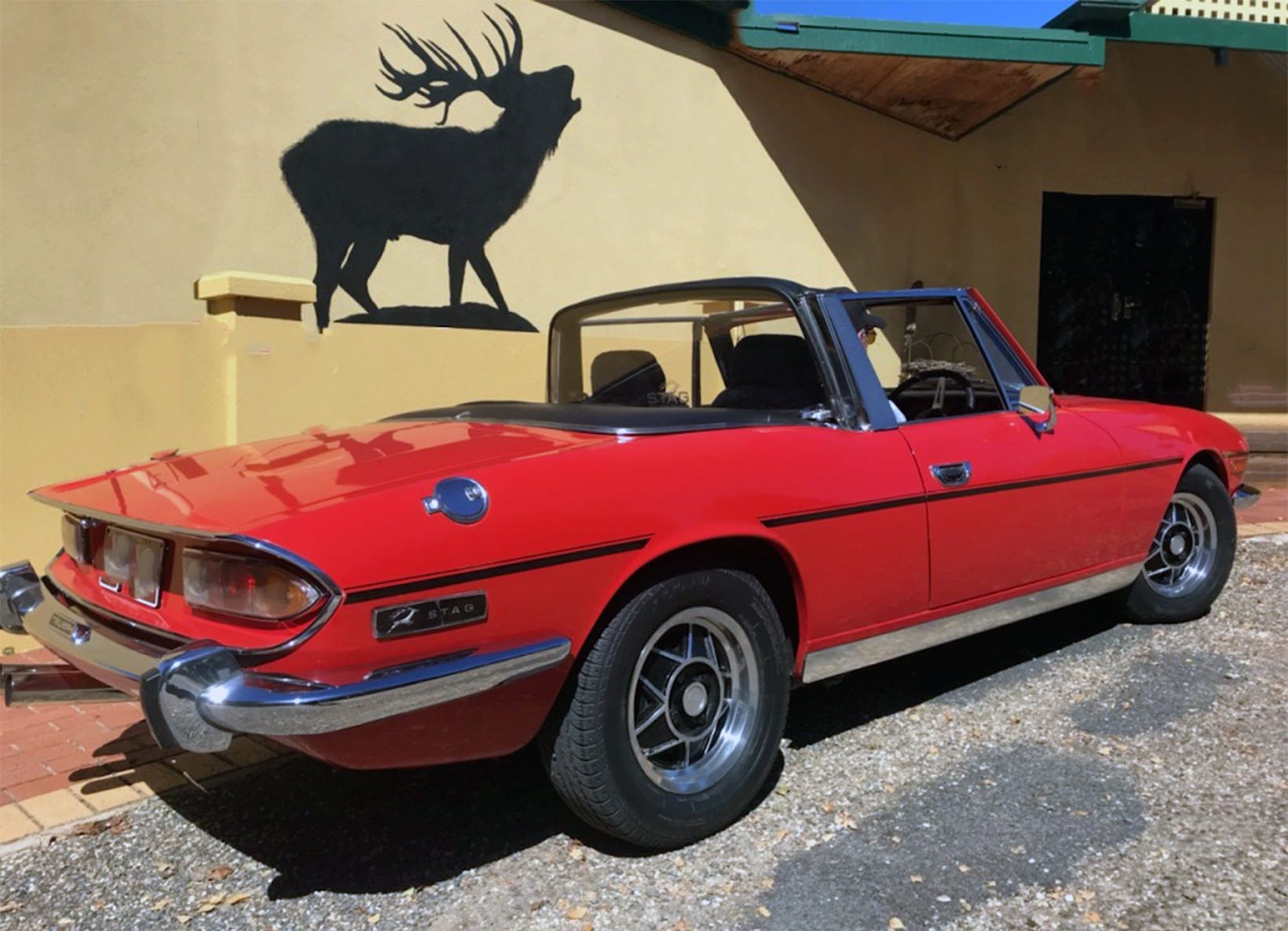 Just about every Stag owner has a photo of their car outside a “Stag” pub. Another popular photo opportunity is a “Stag” street sign.

“Liz enjoyed every time she drove it on all the local club runs with hard top, soft top or top down. And the sound of the V8 is awesome,” he says.

Five months after acquiring the Stag, Liz died in her sleep.

“I decided to keep it in memory of my darling wife”, John says. “I have driven the Stag over 20,000km including four 1,200km round trips with the Triumph Car Club of Victoria. Our daughter Nadine loves driving it too.” 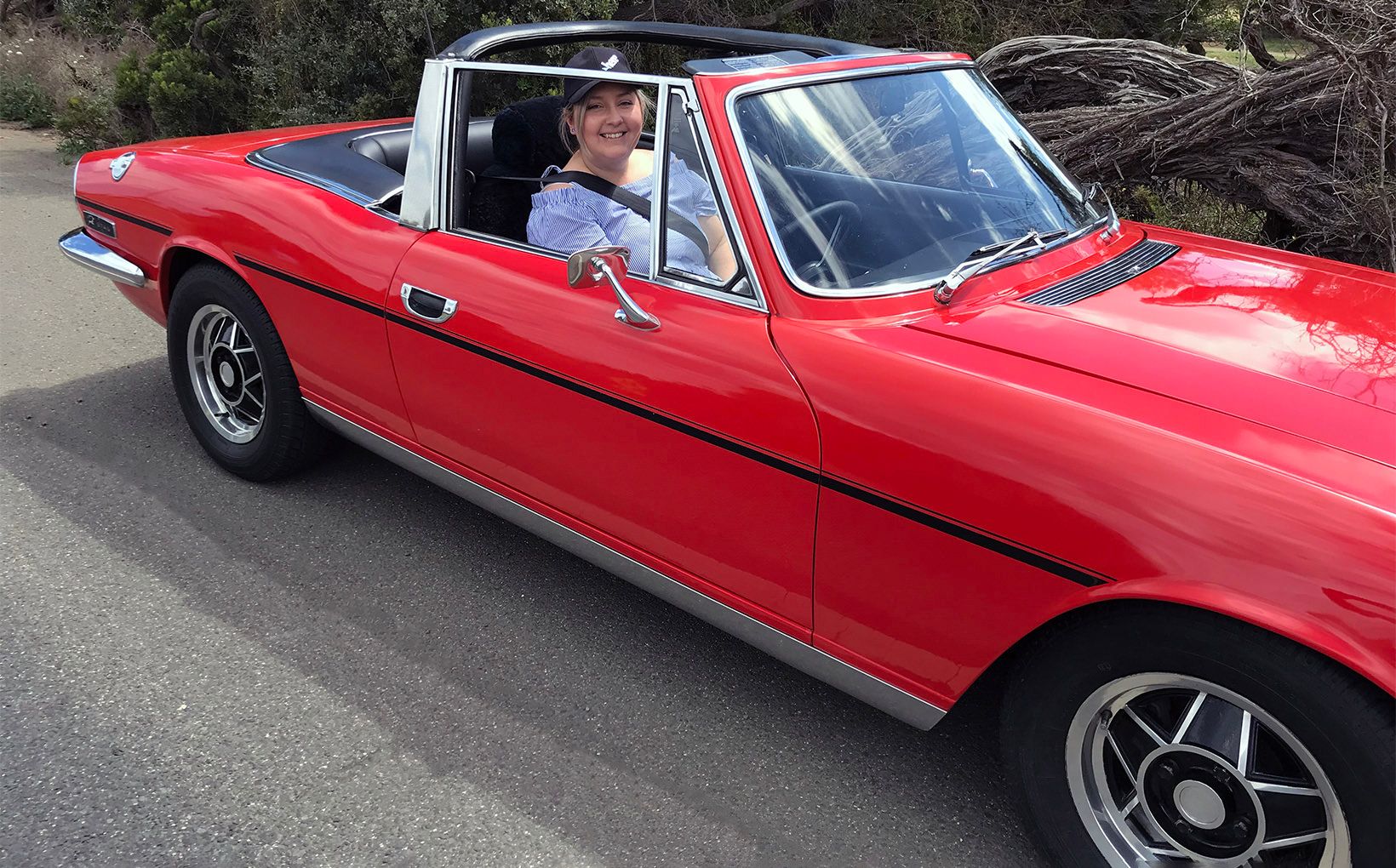