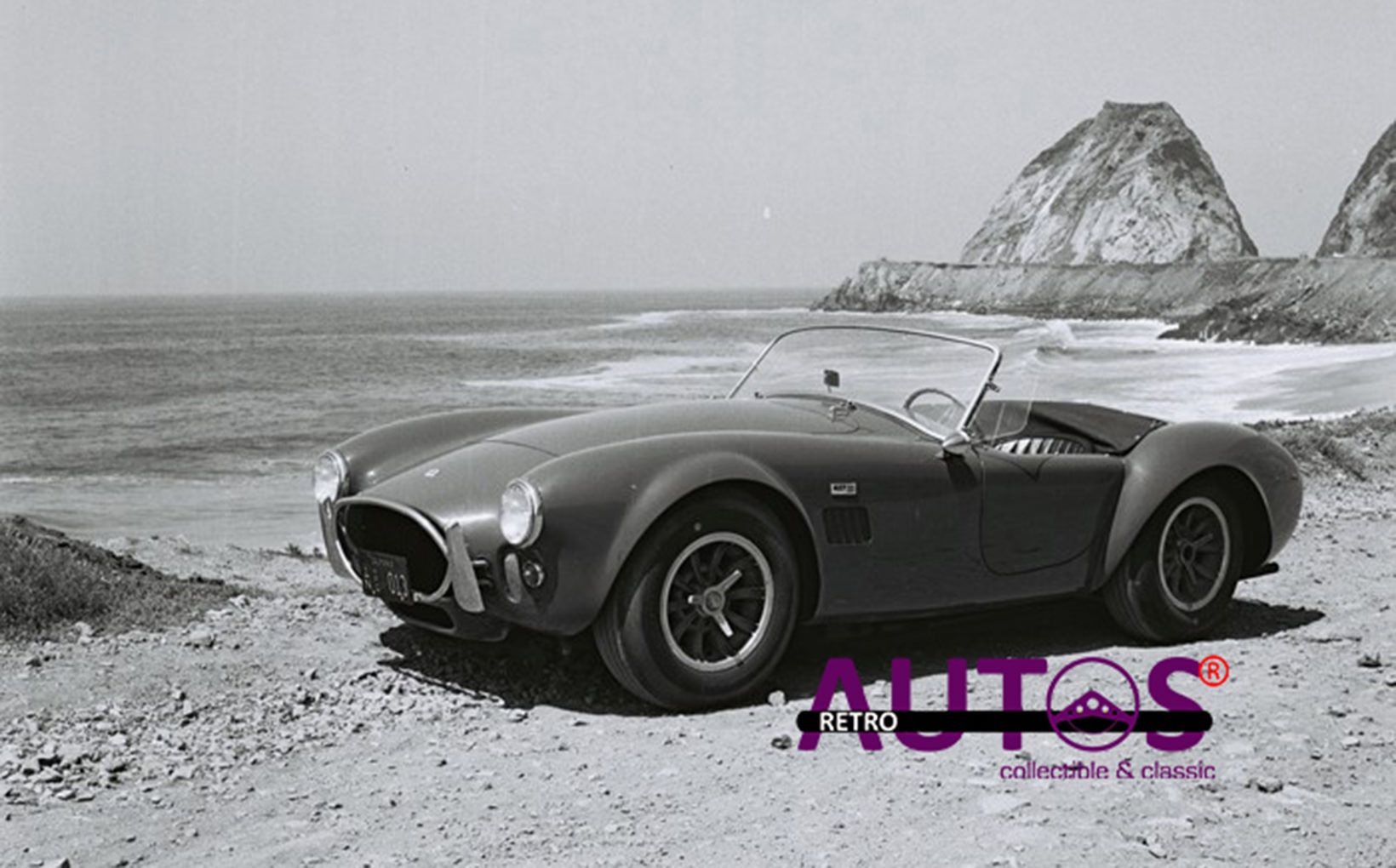 From Texas he came, having been a pilot in the US Air Force, and flown the dangerously problematic Boeing B-29 Super Fortress in its early testing period. In the late 1940s and early 1950s he’d tried to make a living driving a truck and working on oil rigs. Then he went into the poultry business. It failed. That’s when, at almost 30 years of age, he decided to embark on a professional career focused on what he was really good at: driving cars fast, winning races and making sure everyone knew about it.

Beginning in 1952, Carroll Shelby quickly gained a formidable reputation as a race car driver in the USA, South America and Europe. 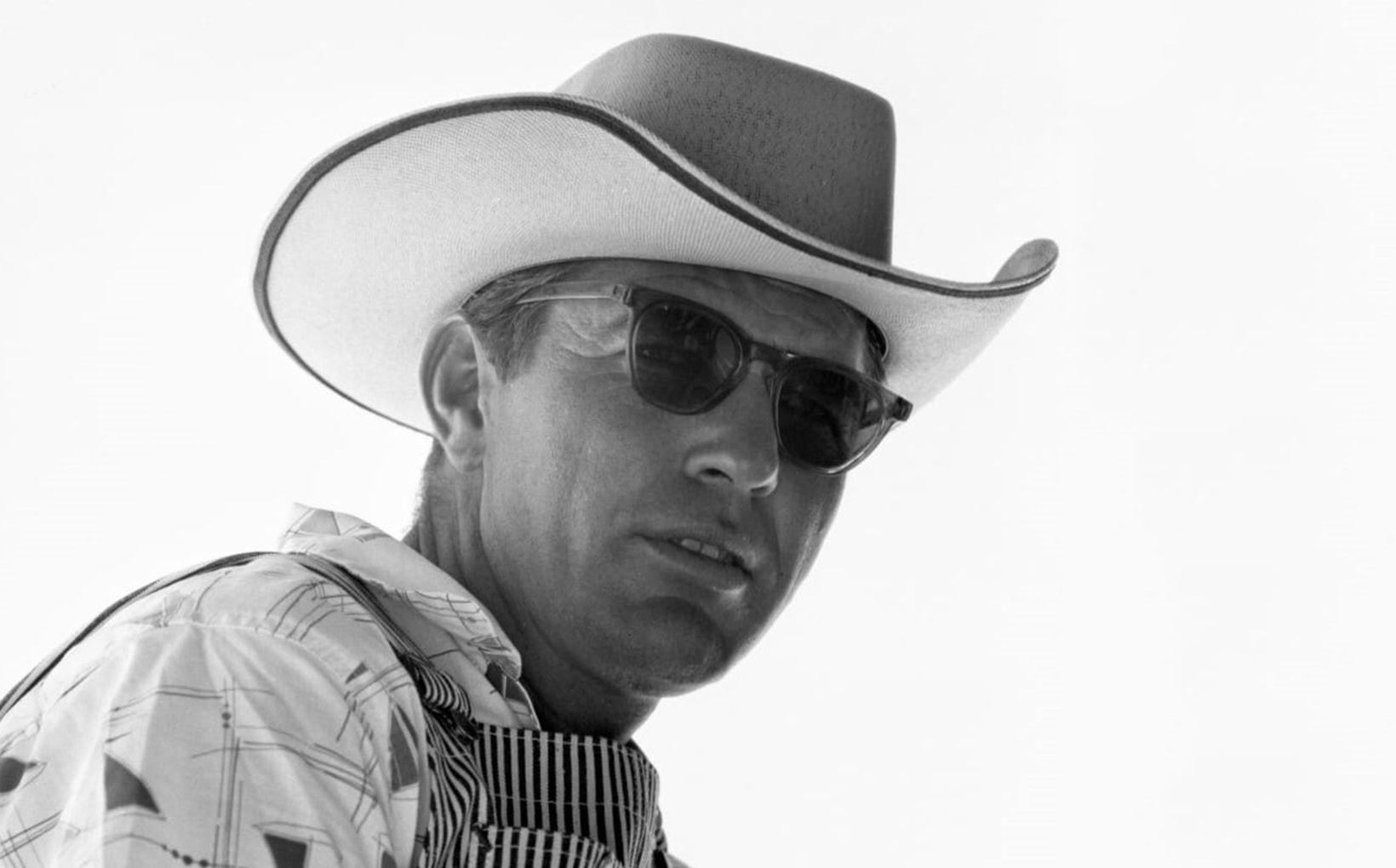 Carroll Shelby on the Bonneville salt flats in 1956.
Image: The Henry Ford Museum 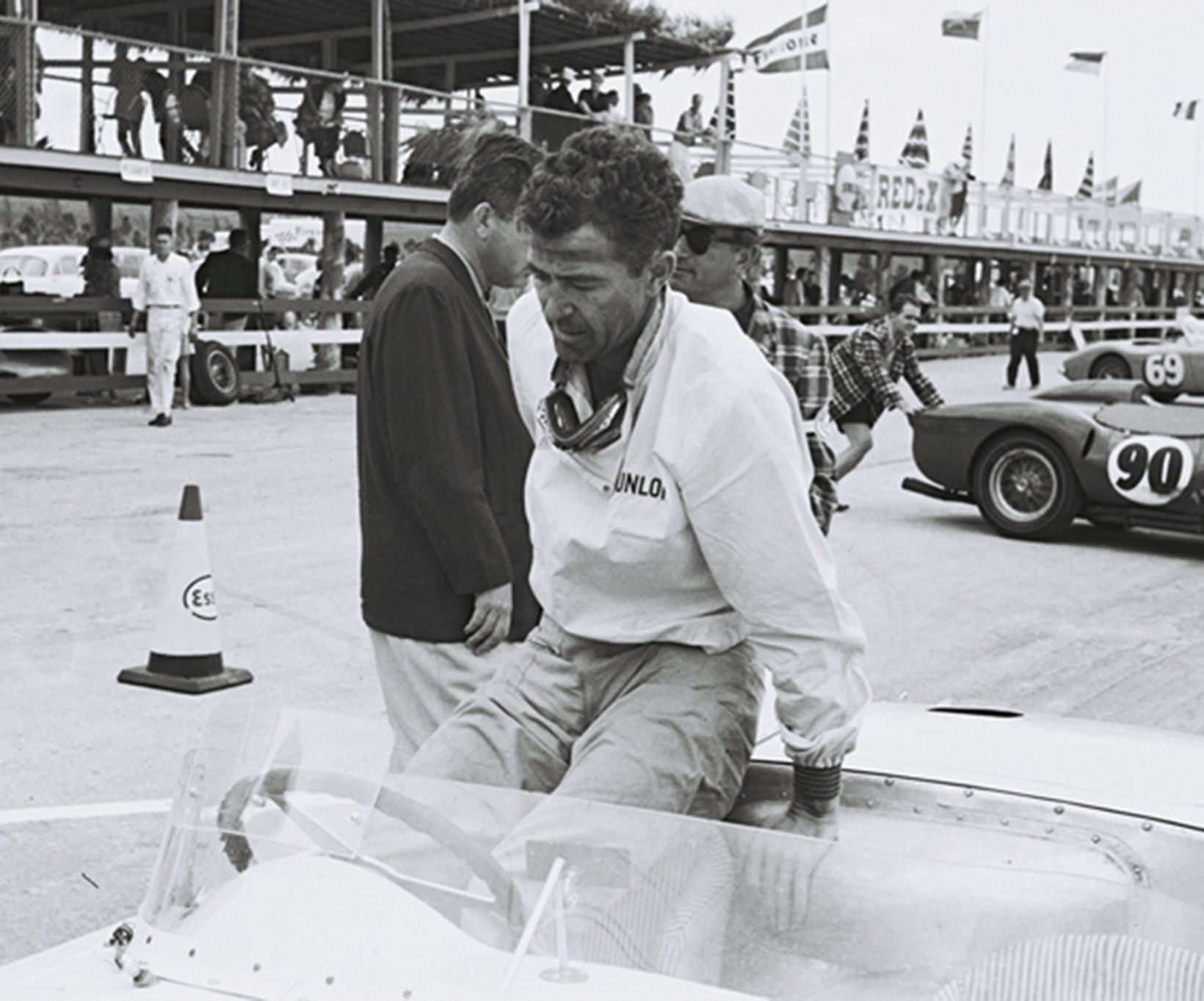 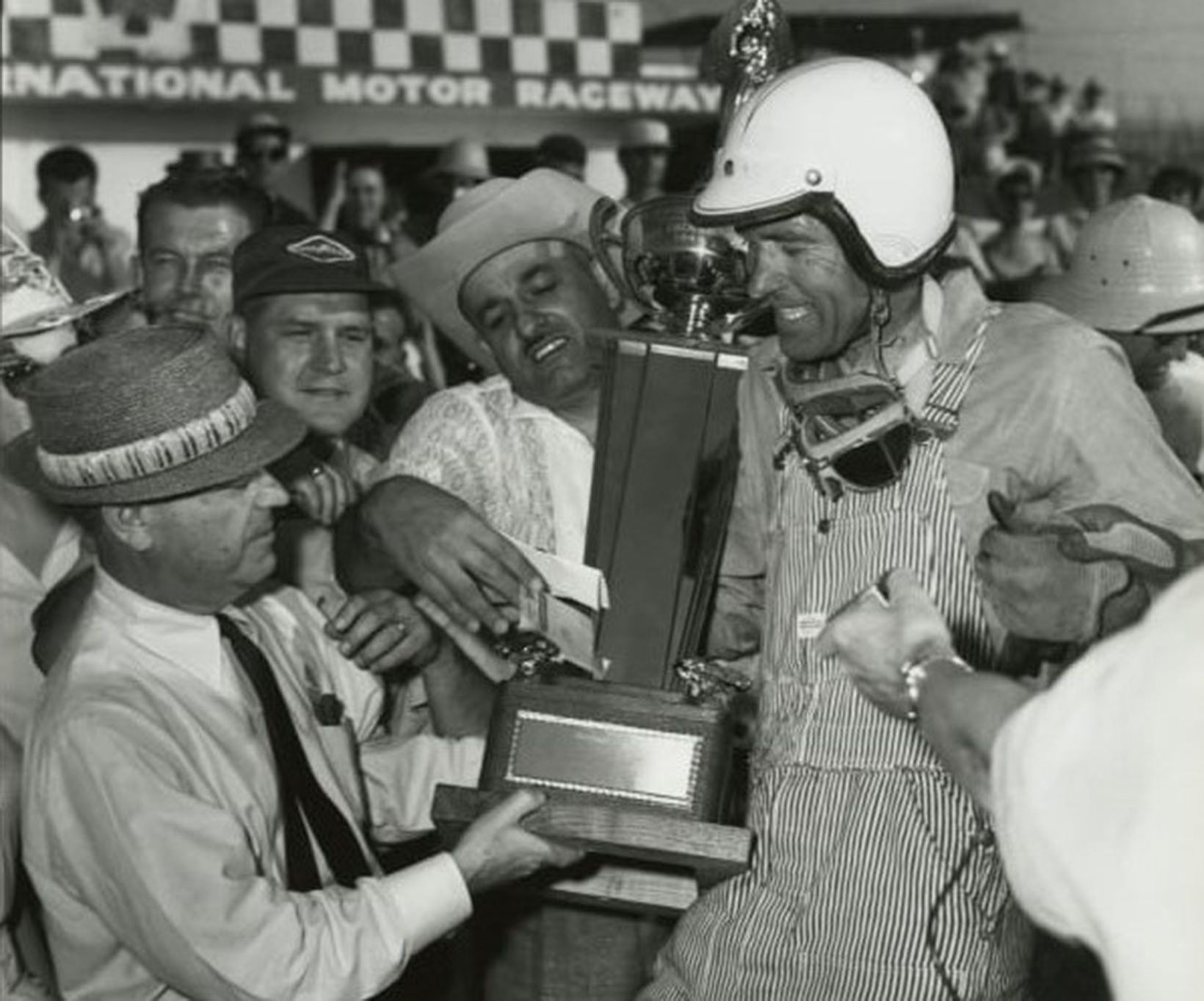 When a heart condition, which he’d had since childhood, caused him to retire from active competition in 1960, he set his sights on building a V8 sports car.

The opportunity came when he learnt that the UK sports car maker AC Cars was in need of a new supplier of engines and was developing the Ford Zephyr 2.6 litre six for its AC Ace model. The Ace had been on the market since 1953 and even in 1961 it looked modern. Shelby had seen them on UK roads and as race cars, especially at Le Mans in 1957, 1958 and 1959. He believed the Ace was ideal for what he had in mind. 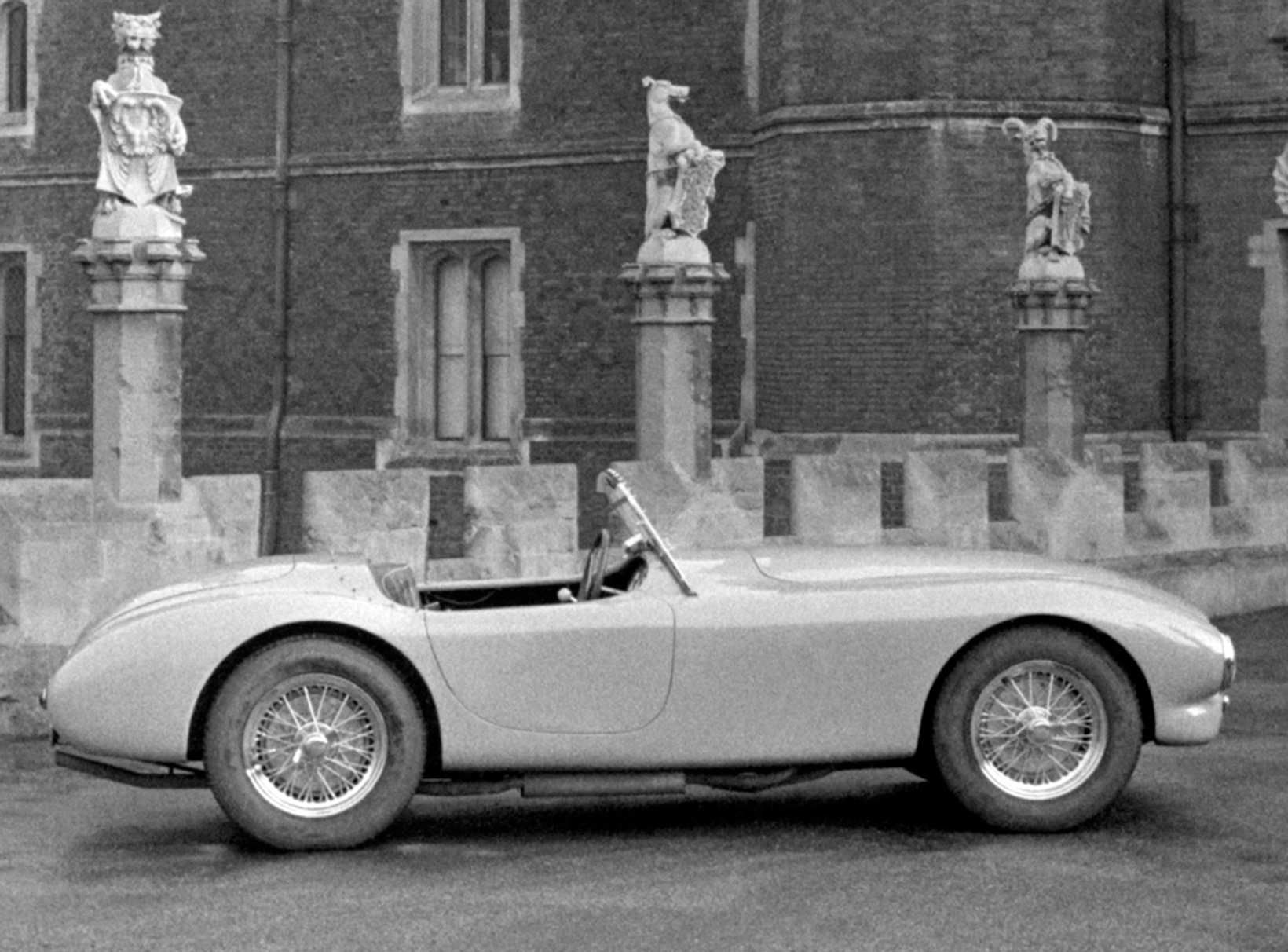 The 1953 prototype of the AC Ace.
Image: AC company

AC was celebrating its 60th anniversary when Shelby went to see them in 1961. He suggested the chassis be altered to accept a simple OHV American V8. AC liked the idea so Shelby went to GM and Ford asking for help. GM said “no”. They already had the Corvette.

Over at Ford there was a more welcoming reception. They could see that Shelby’s concept would create a car with potential to compete with the Corvette in road racing duels. And it just so happened that they had a brand new small-block V8 which could be used. It was the 221/260 cubic inch (3.6/4.3 litres) engine destined for the new Fairlane and Falcon Sprint.

Ford’s 221 cubic inch/3.6 litre V8 that was released with the 1962 Fairlane and formed the basis of AC agreeing to supply Shelby with cars.
Images: The Henry Ford Museum

Things moved quickly once Ford managers said “yes”. In January 1962, the mechanics at AC fitted an Ace with the 221 cubic inch V8. Satisfied that the idea was feasible they air freighted the car, less motor and gearbox, to Shelby in Los Angeles.

And here the story acquires its mystical status. Without a workshop of his own Shelby went to see his friend Dean Moon, asking if he could use a part of Dean’s workshop to create his new car.

Moon was already a hot-rodding legend on the salt flats and in drag racing. He’d started his speed equipment business while still a teenager at the back of his family diner, called the Moon Cafe. By 1962 Moon’s name and quality products were known worldwide, helped by the “Moon Eyes” logo and the decals that proclaimed your car was “Moon Equipped”, even if it wasn’t. 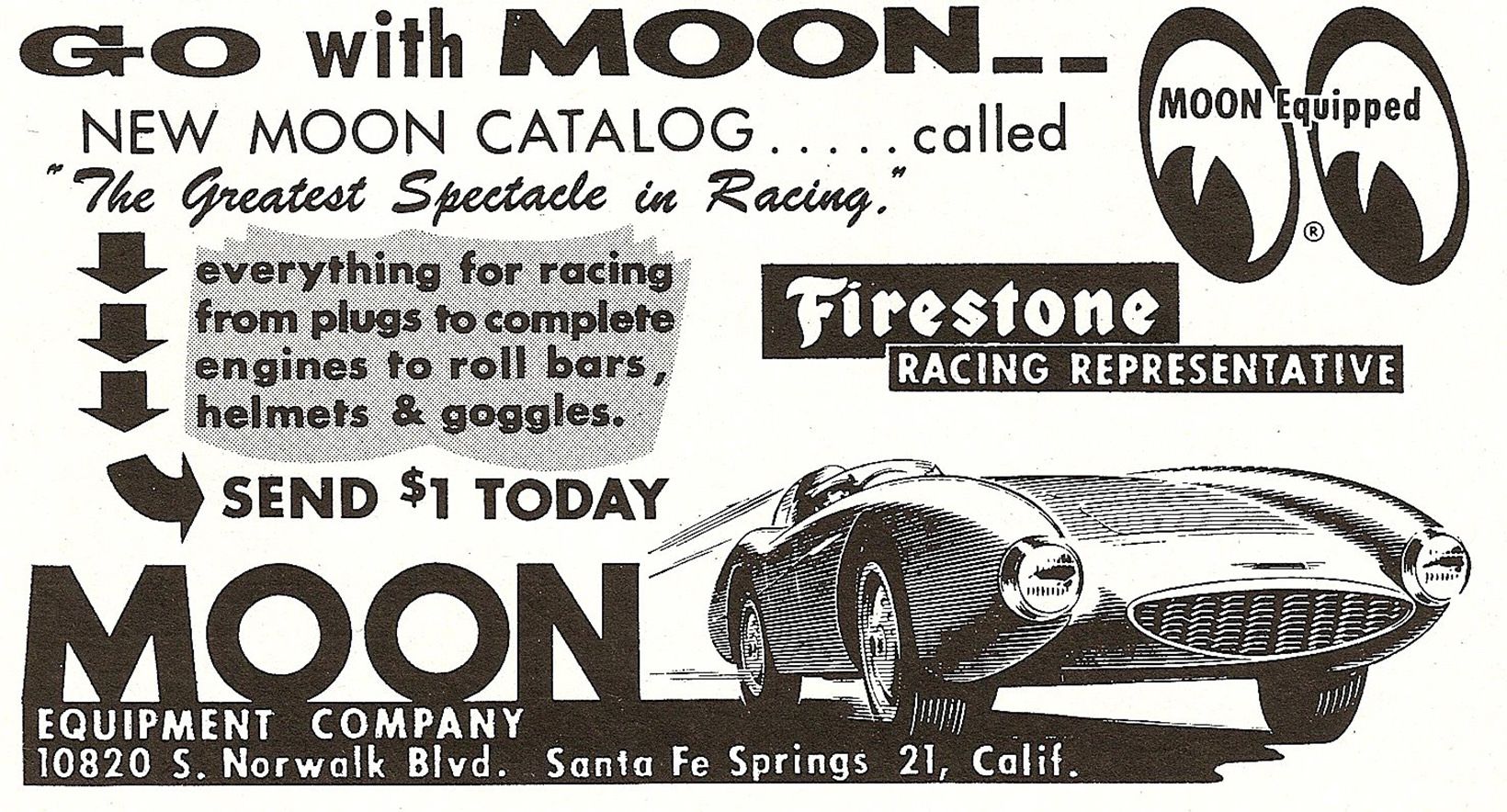 Once it was unloaded off the plane, Shelby towed the AC to the Moon Speed Equipment workshop, located at 10820 Norwalk Boulevard (on the corner with Florence Avenue) in Santa Fe Springs, about 50 minute drive east Los Angeles International Airport along the 105 freeway. 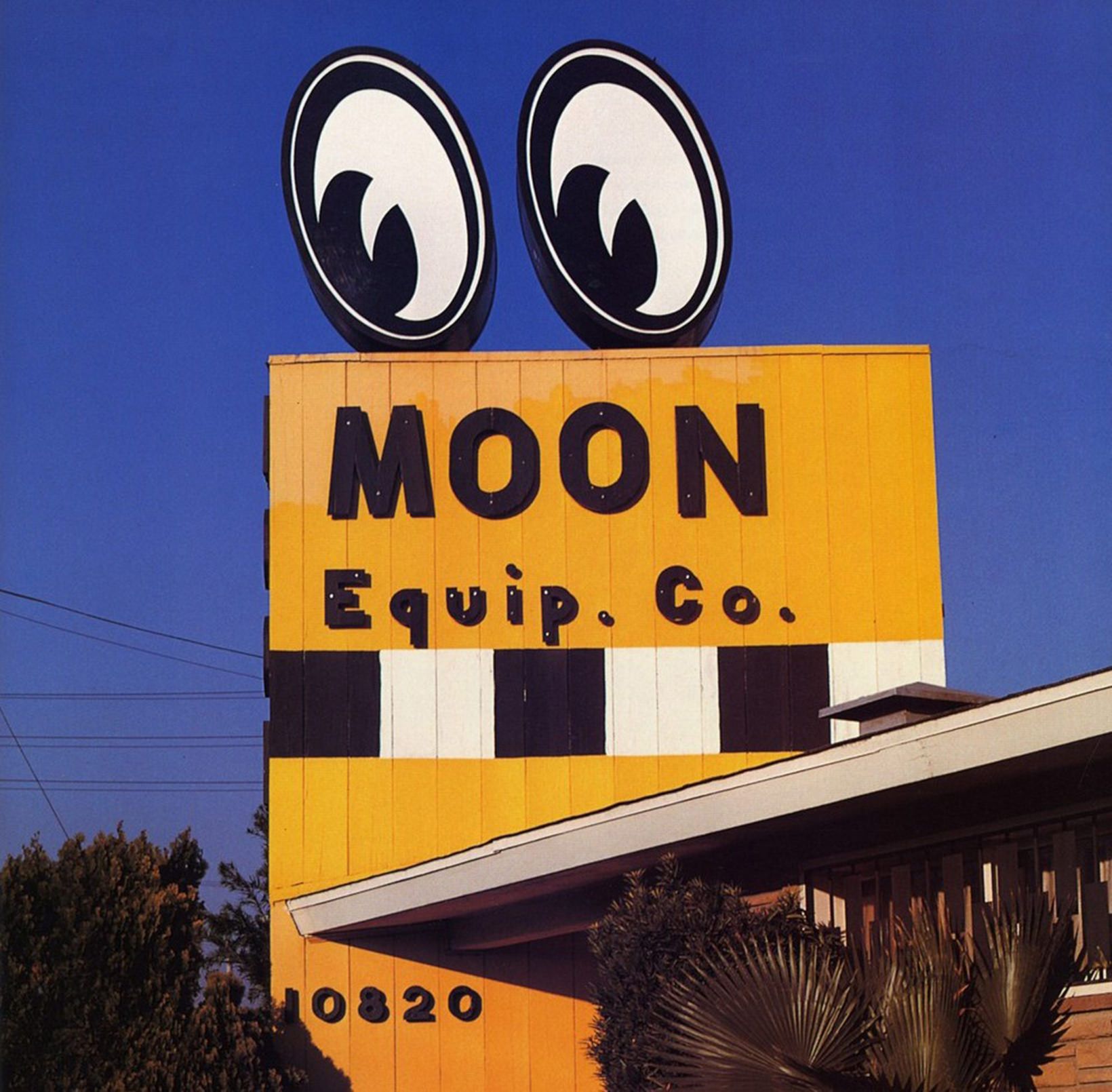 The tall billboard sign is no longer there, but the Moon Equipment company is still at 10820 Norwalk Blvd. It is worth the pilgrimage ever you are in Los Angeles.

Inside of eight hours Moon, Shelby and the Moon crew inserted a 260 cubic inch V8 into the AC, bolted a Borg Warner 4 speed manual transmission to it, cut larger openings for the bigger wheels and shod them with some “humper” style tyres. Photographer David Freidman was on hand to capture the historic build, and his photos now reside in the Henry Ford Museum. 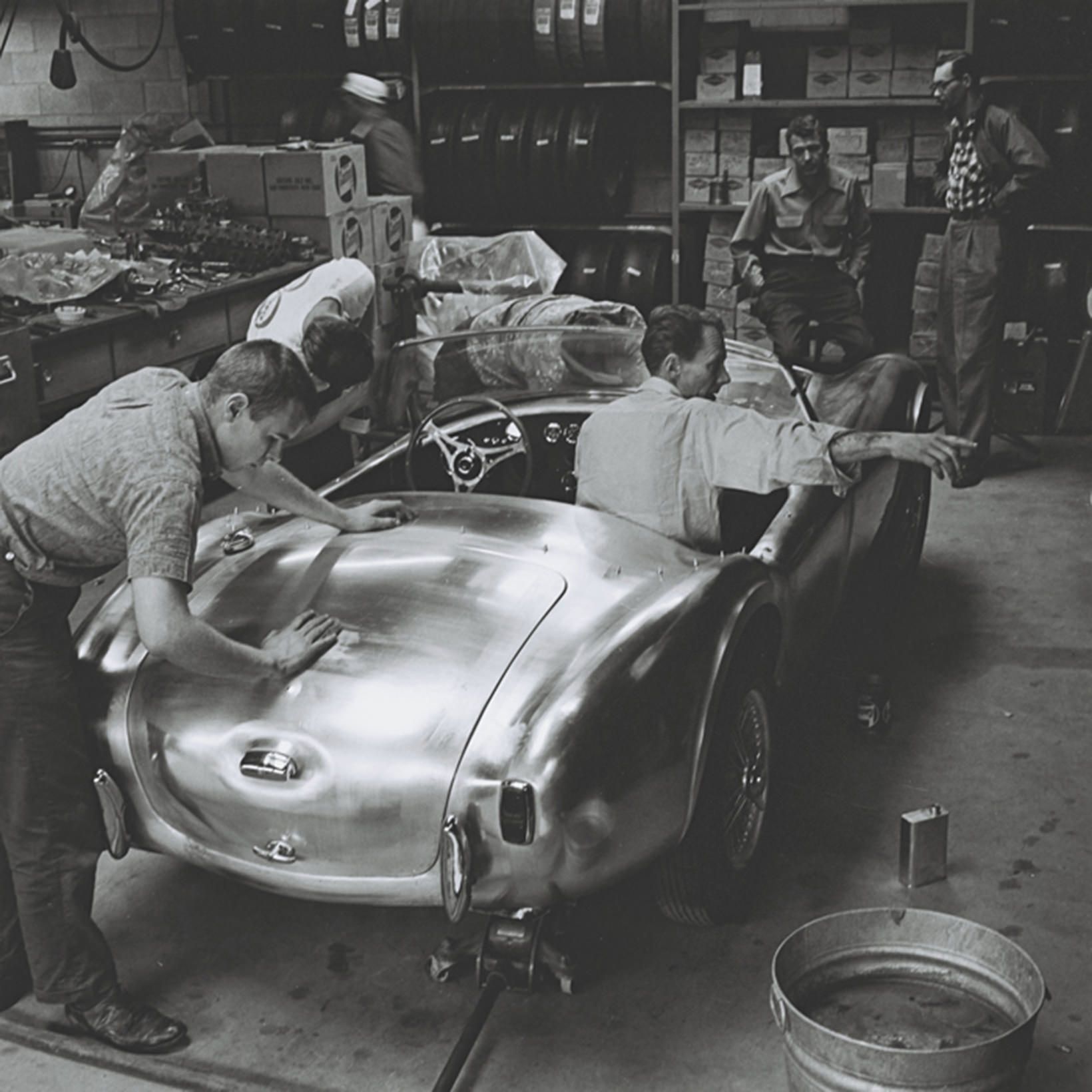 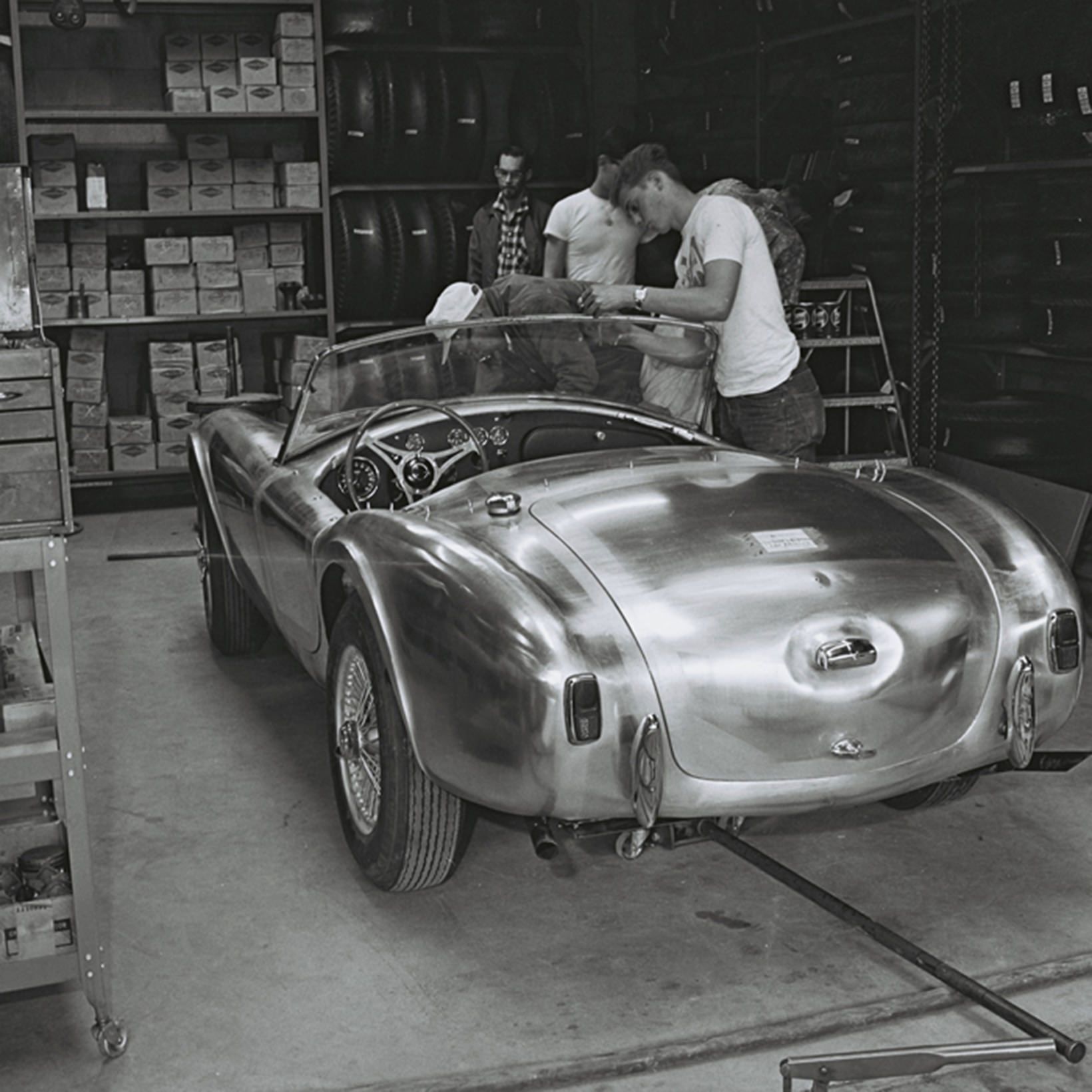 Shelby and the Moon team work on the first Cobra. Dean Moon is in wearing the white “Moon Eyes” T-shirt.
Images: The Henry Ford Museum 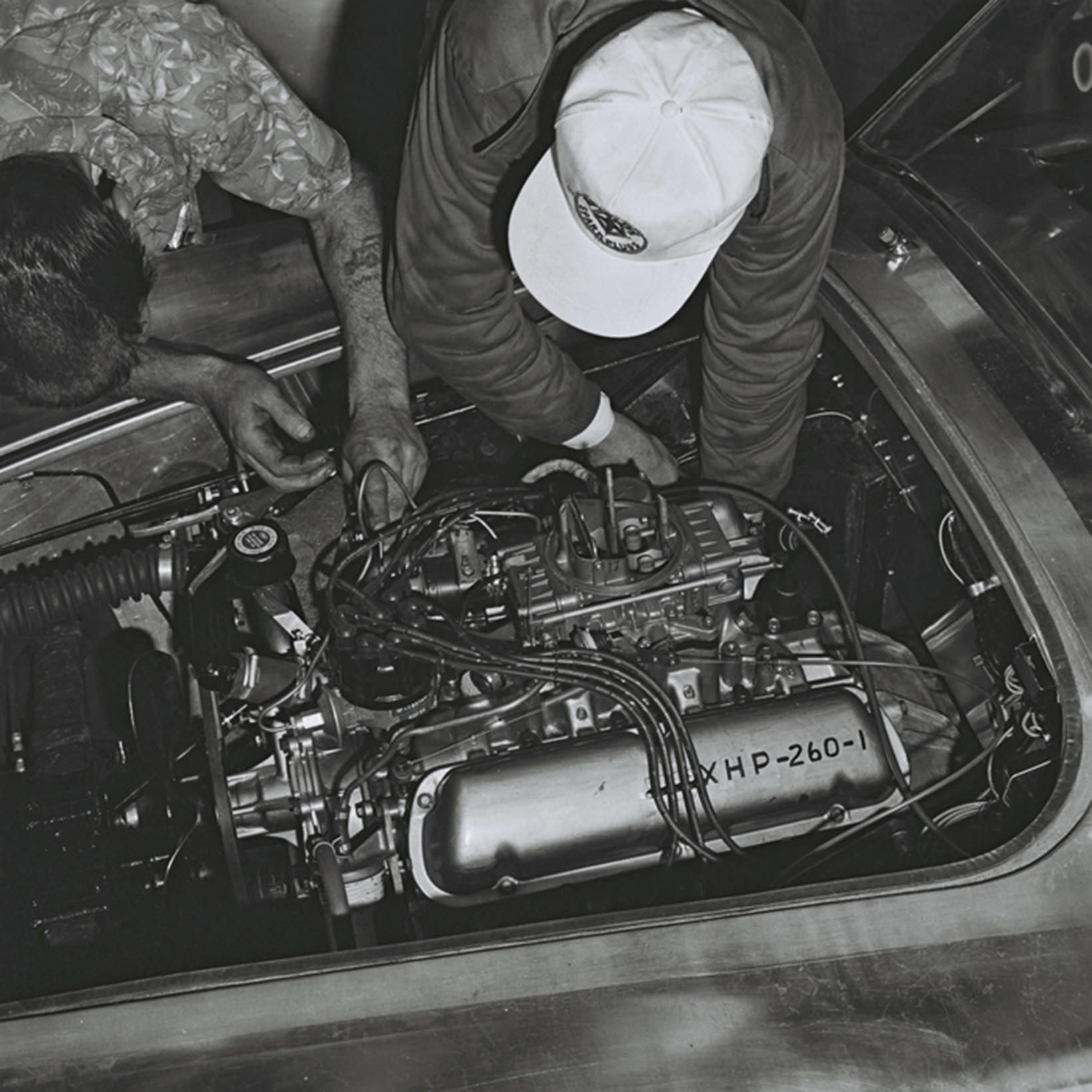 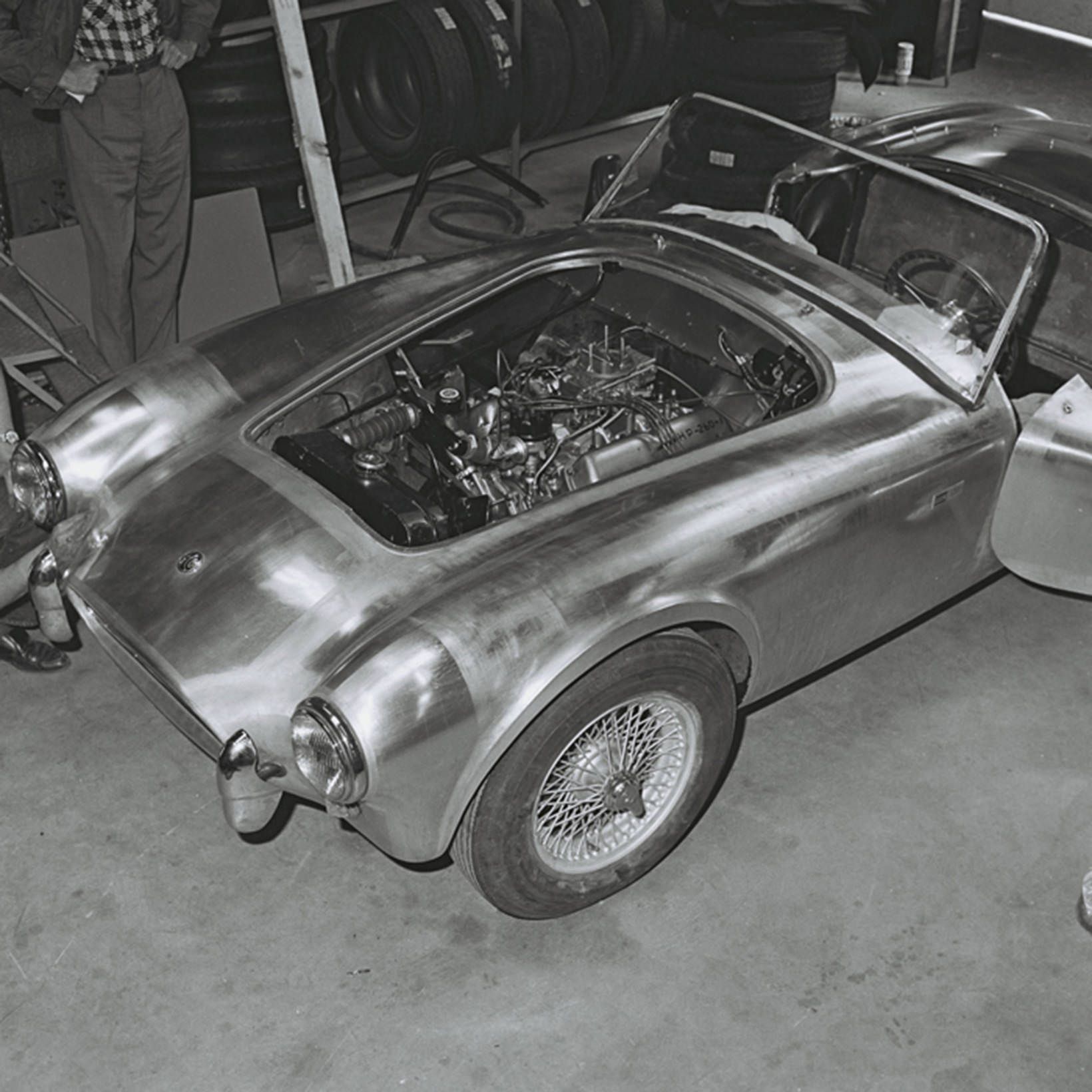 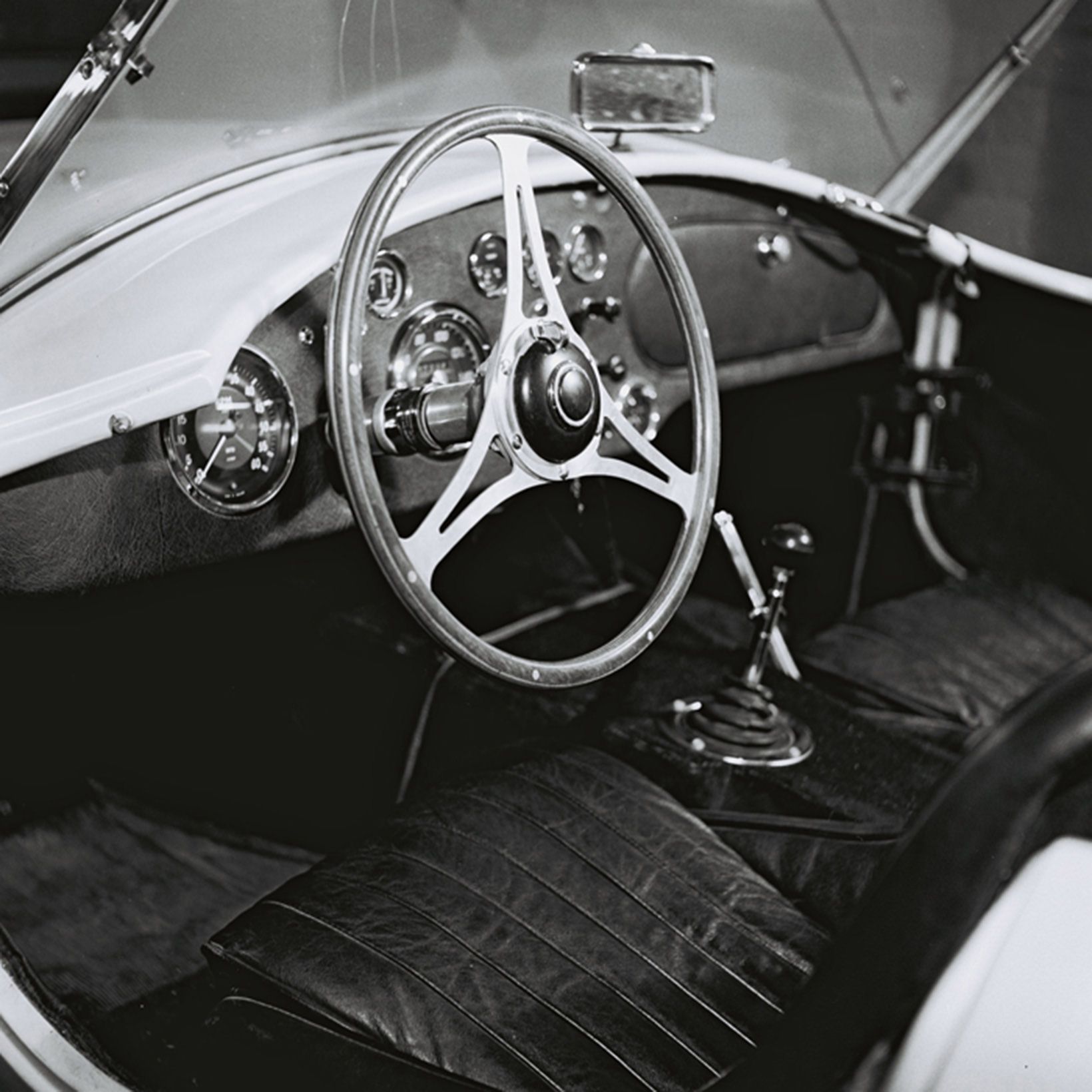 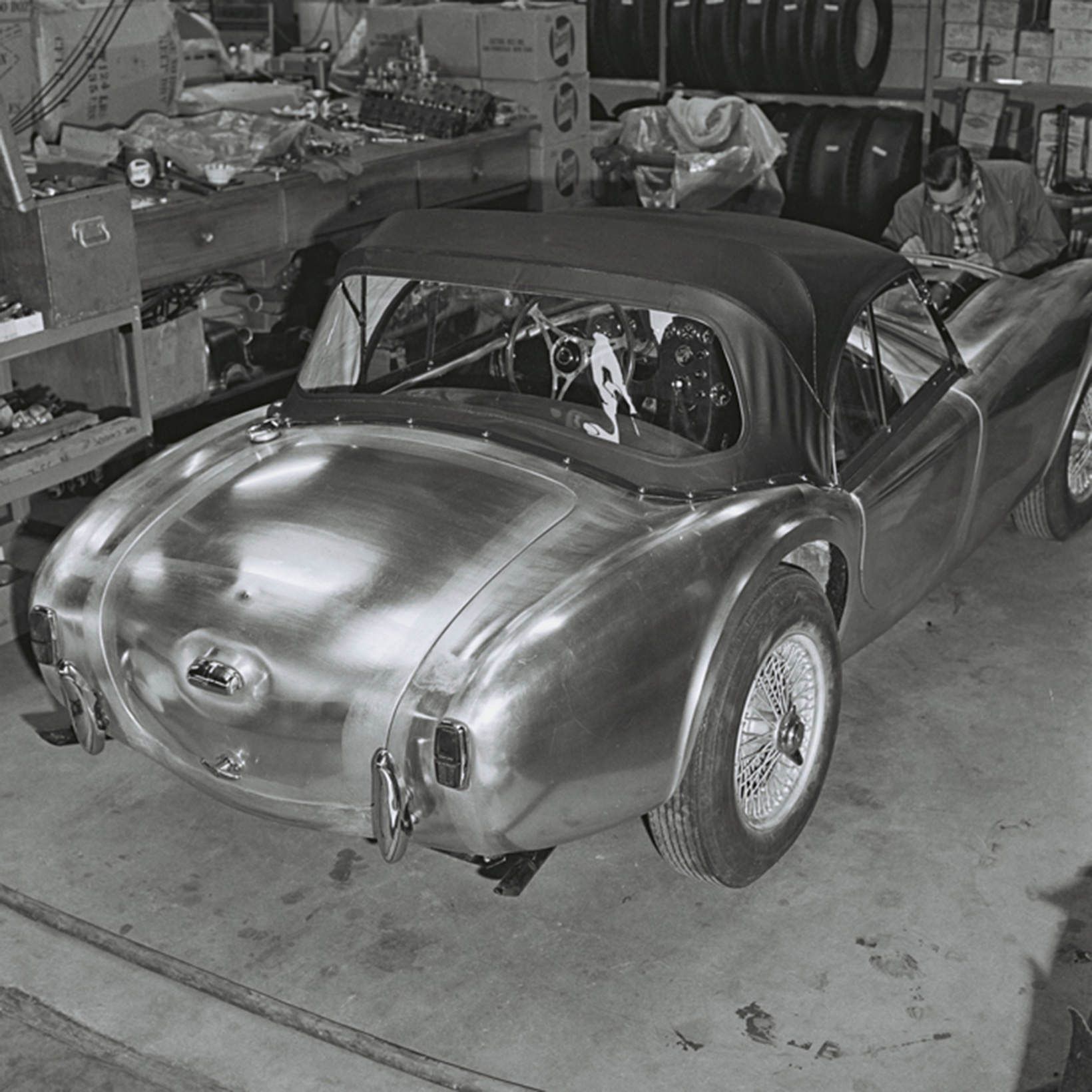 A final tidy up and after just eight hours the Cobra is ready for its paint.
Images: The Henry Ford Museum

Shelby named the car “Cobra”, which he said came to him in a dream. And a legend was created that still has impact today: 0-60 in 4.2 seconds.

When asked to describe the reason for the success of the Cobra, Shelby had a simple explanation:

“It's a massive motor in a tiny, lightweight car.”

In March 1962 Shelby moved to his own workshop at 1042 Princeton Drive in Marina Del Ray, Los Angeles, and named his company Shelby American, Inc. The Shelby building is still there, surrounded these days by high rise apartments. He later leased a hangar at Los Angeles airport, and it is that workshop you see in the film Ford vs Ferrari. 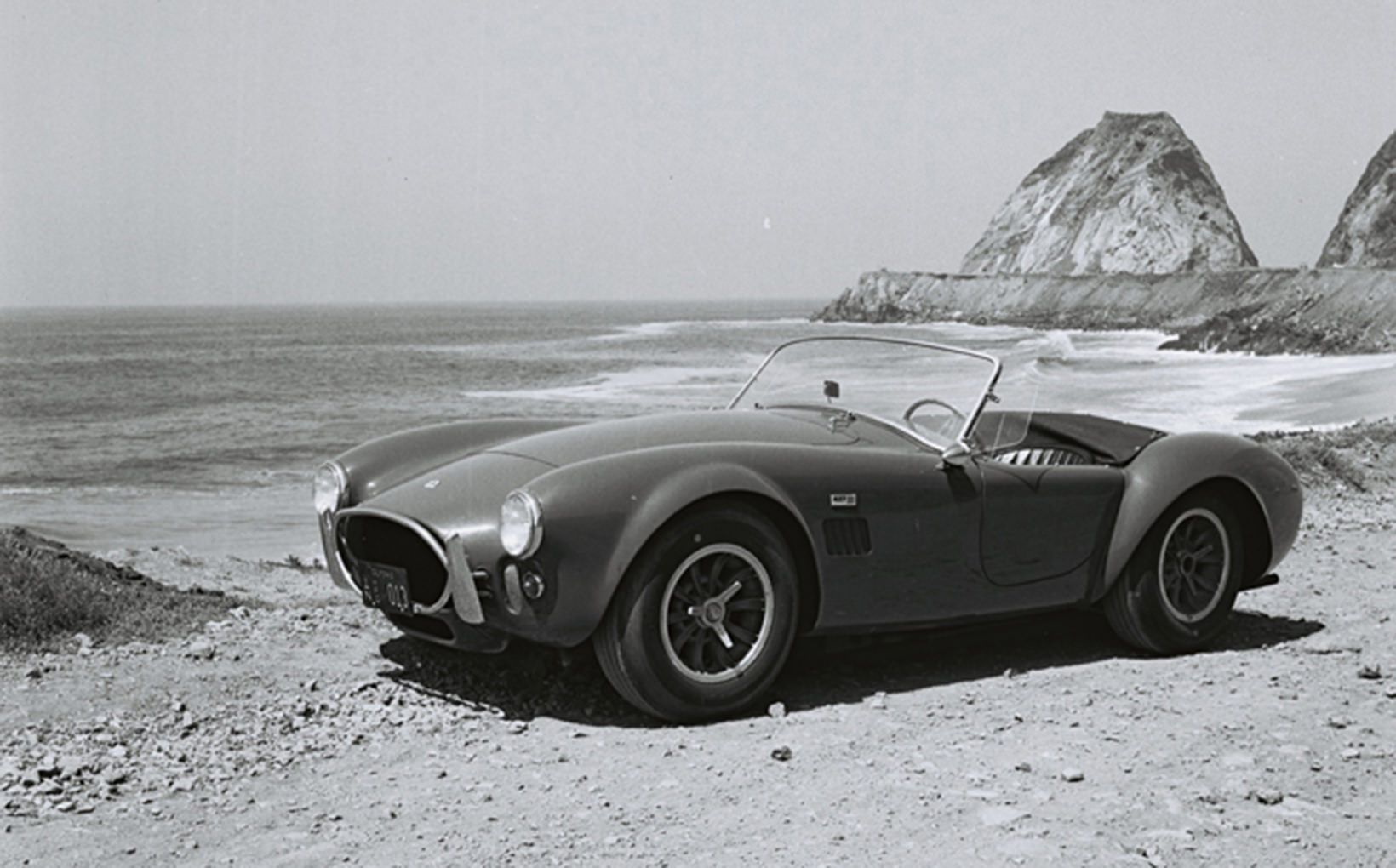 Many of the initial publicity photos were taken along the Pacific Coast Highway. This image shows the Point Magu rock in the background. You are no longer allowed to park where this photo was taken in 1962.
Image: The Henry Ford Museum

The motoring press loved the Cobra, with each magazine striving to add new superlatives. What they did not know was that in the very early production stages Shelby only had one working car. To give the impression of a many cars he repainted that same car in different colours before each magazine journalist took it out to test drive. 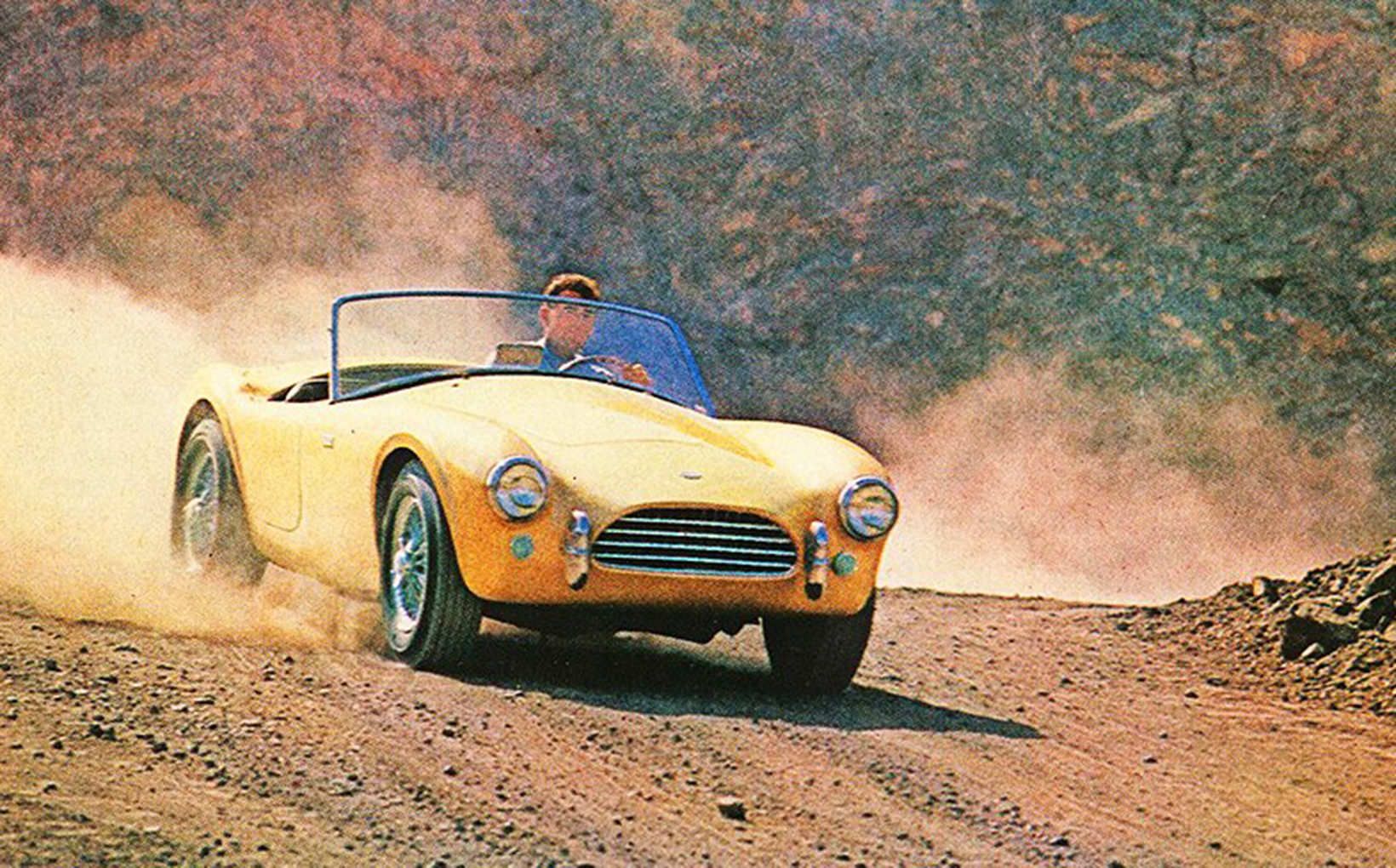 Now painted yellow, the Cobra is given a workout on the dirt by Shelby himself. This photo was used in a print advertisement. Shelby owned the first Cobra until his death in 2012. It was sold at auction in 2016 for $US 13.75 million.

The Cobras quickly began to dominate road racing in the USA and Europe. From this point onward, Shelby’s fame and global influence expanded at an exponential rate. Movie stars like Steve McQueen became fans of Mr Shelby and his fast cars. 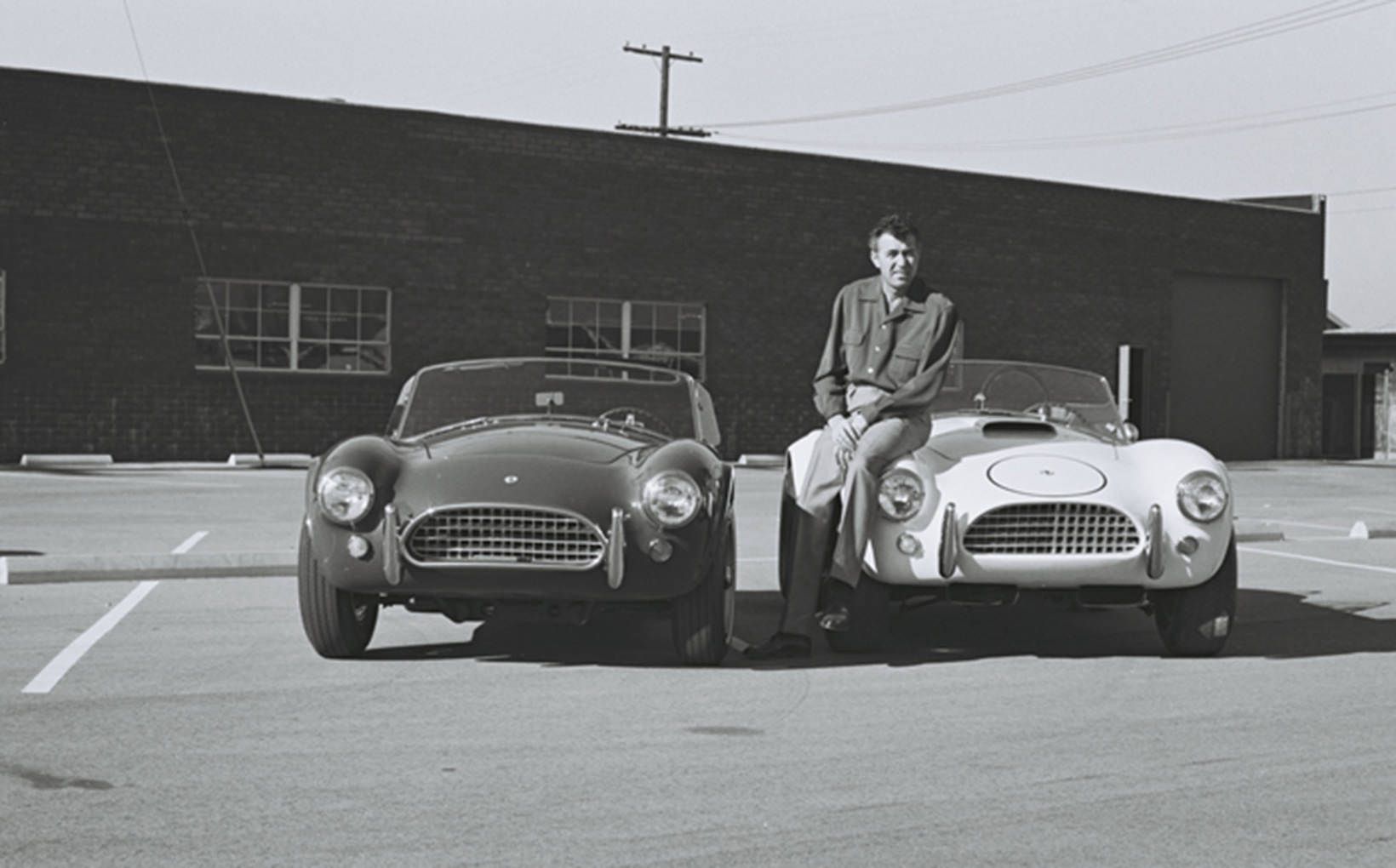 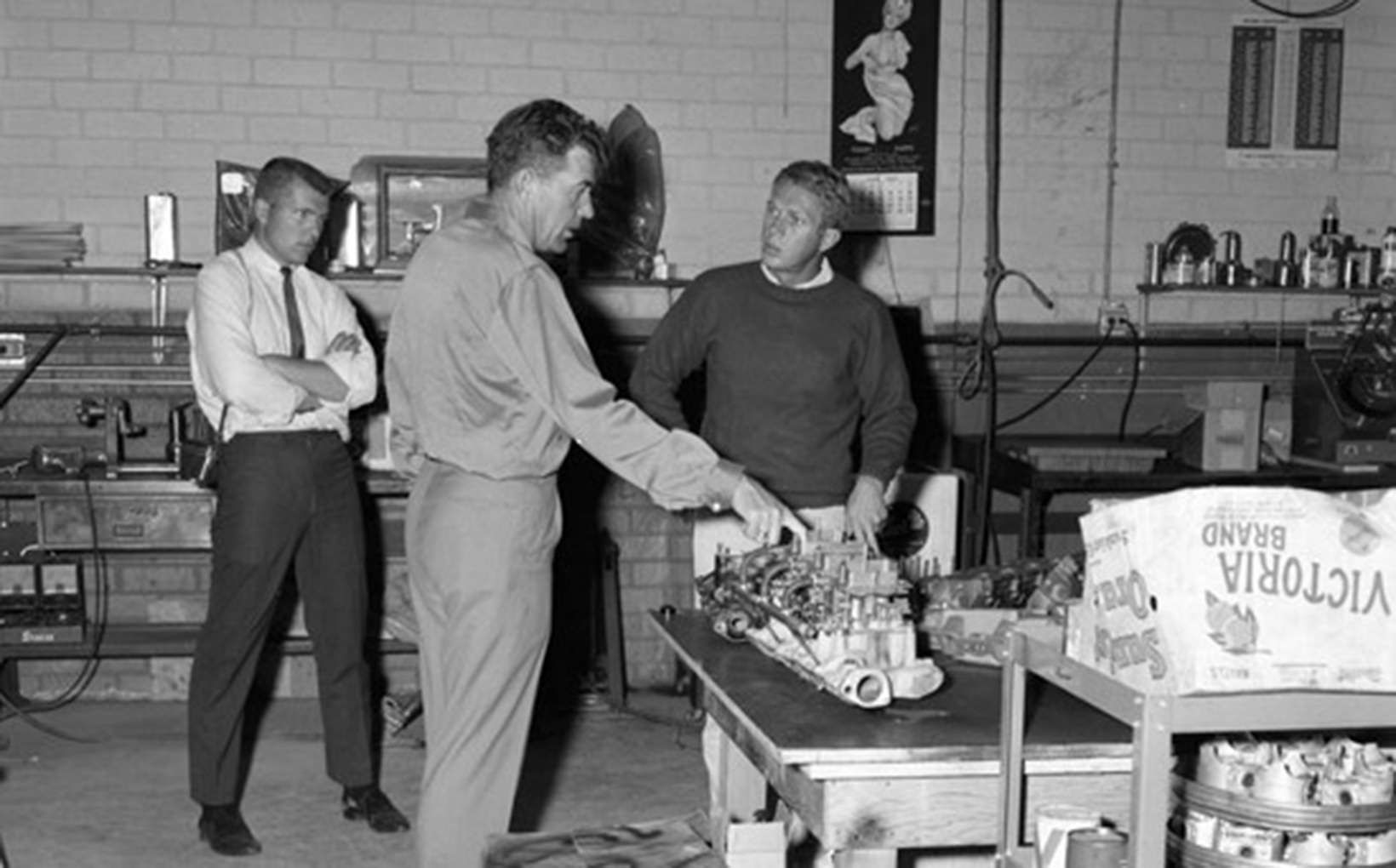 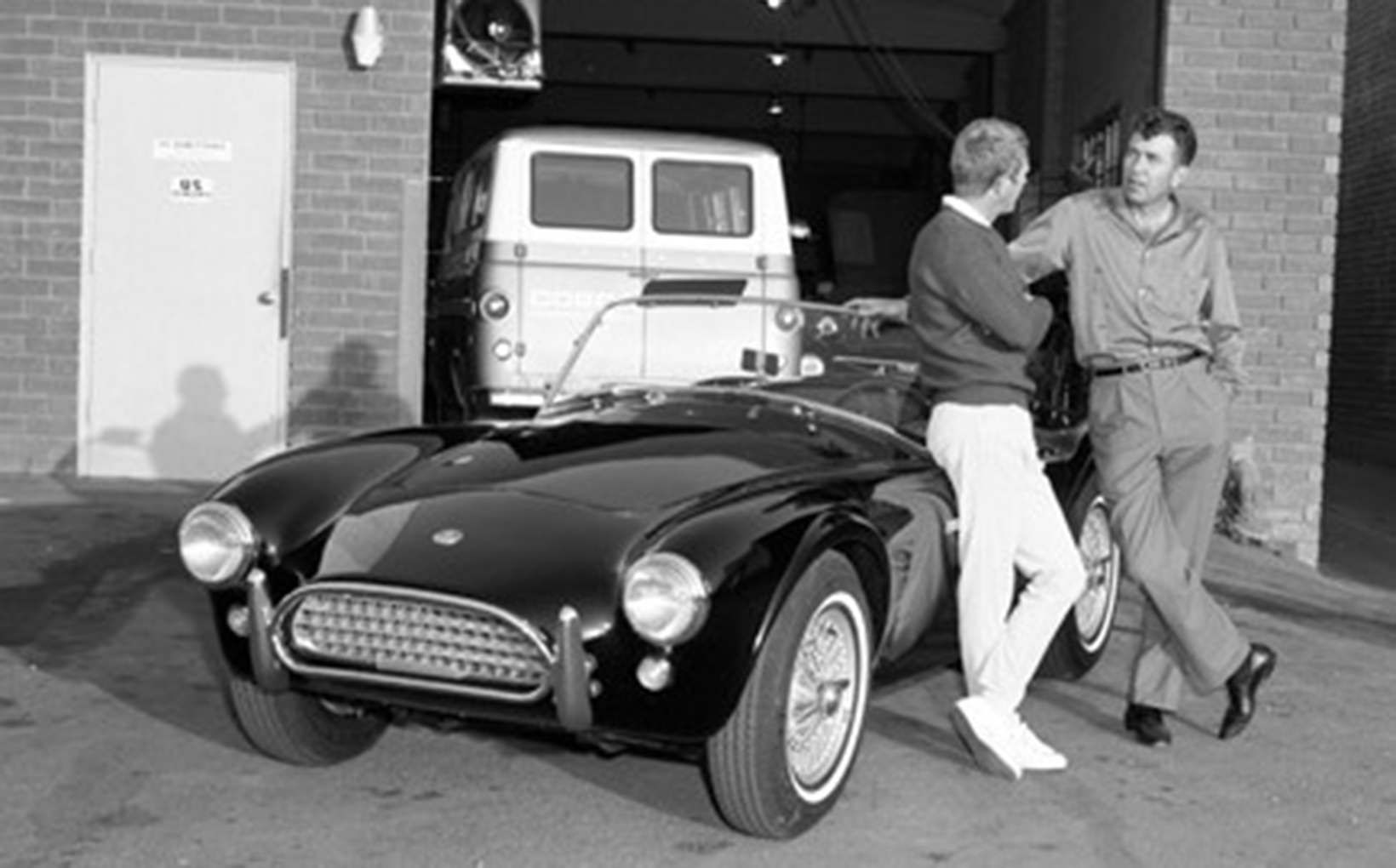 Shelby was invited by Ford to be part of the Lotus Ford team’s invasion and conquering of the Indianapolis 500. He was instrumental in Ford’s momentous wins at Le Mans, first with the AC Cobra in the GT class and then with the awesome GT40s, as portrayed in the movie Ford vs Ferrari.

For a while his Cobras owned every chequered flag at the Sebring 12-hour race.

In late 1964, Ford asked Shelby to put some more muscle into the new Mustang fastback and the GT350 and GT500 street and track legends were born. 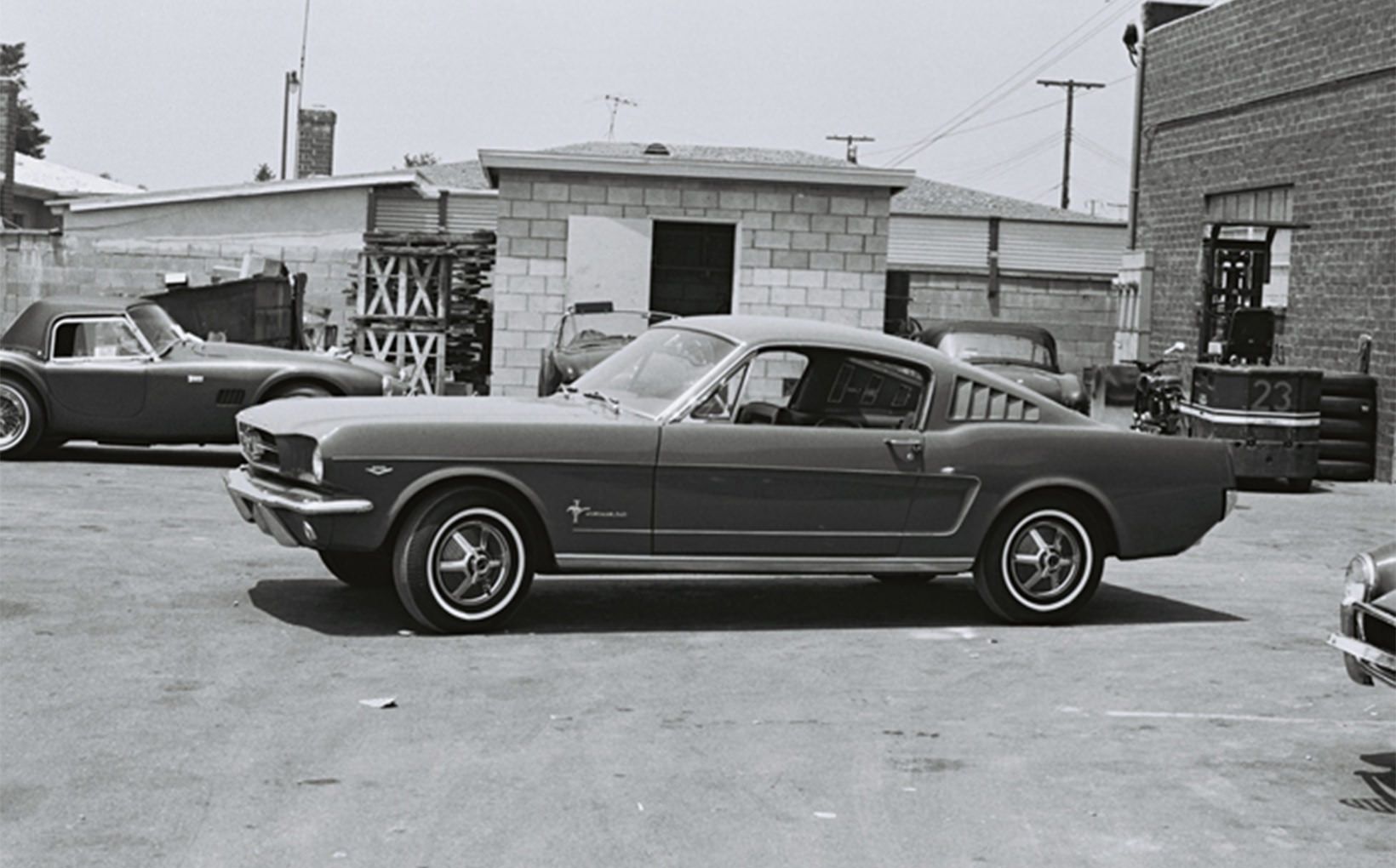 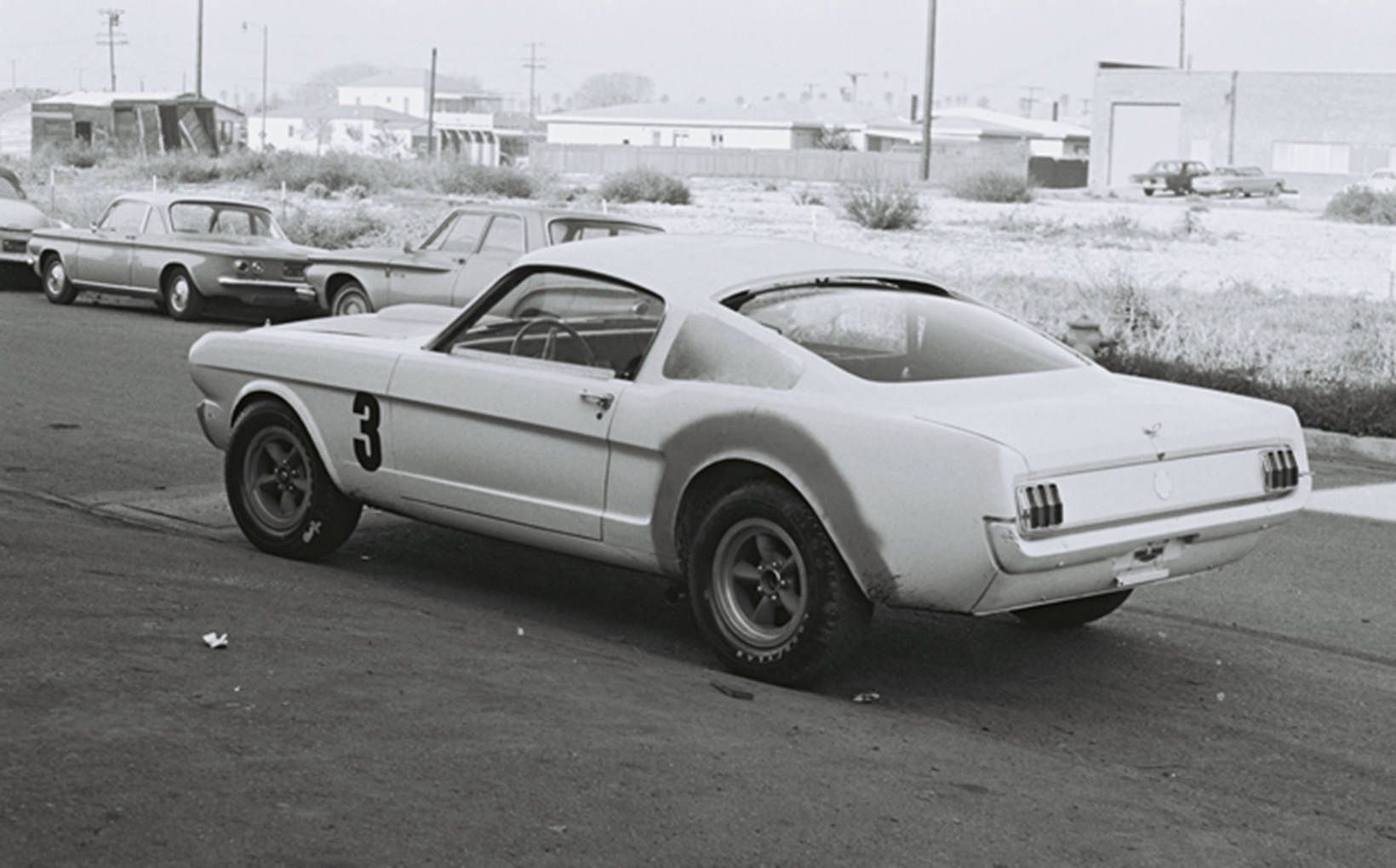 This is the first Mustang delivered to Shelby. It was converted into the GT350R prototype race car. The vacant land across the street is now occupied by high rise apartment buildings.
Images: The Henry Ford Museum

In a world now full of corporatized performance brands, like Ralliart, AMG, Nismo and so on, the name SHELBY sits at the top of the pyramid. You could theorise that Shelby’s real skill was his ability to combine a chassis, suspensions, motors, gearboxes, drivers, teams of talented people and loads of PR in such a way as to dramatically enhance the outcome. But, when it all comes down to it, the reason Shelby was so successful was captured by him many years ago in just three words: 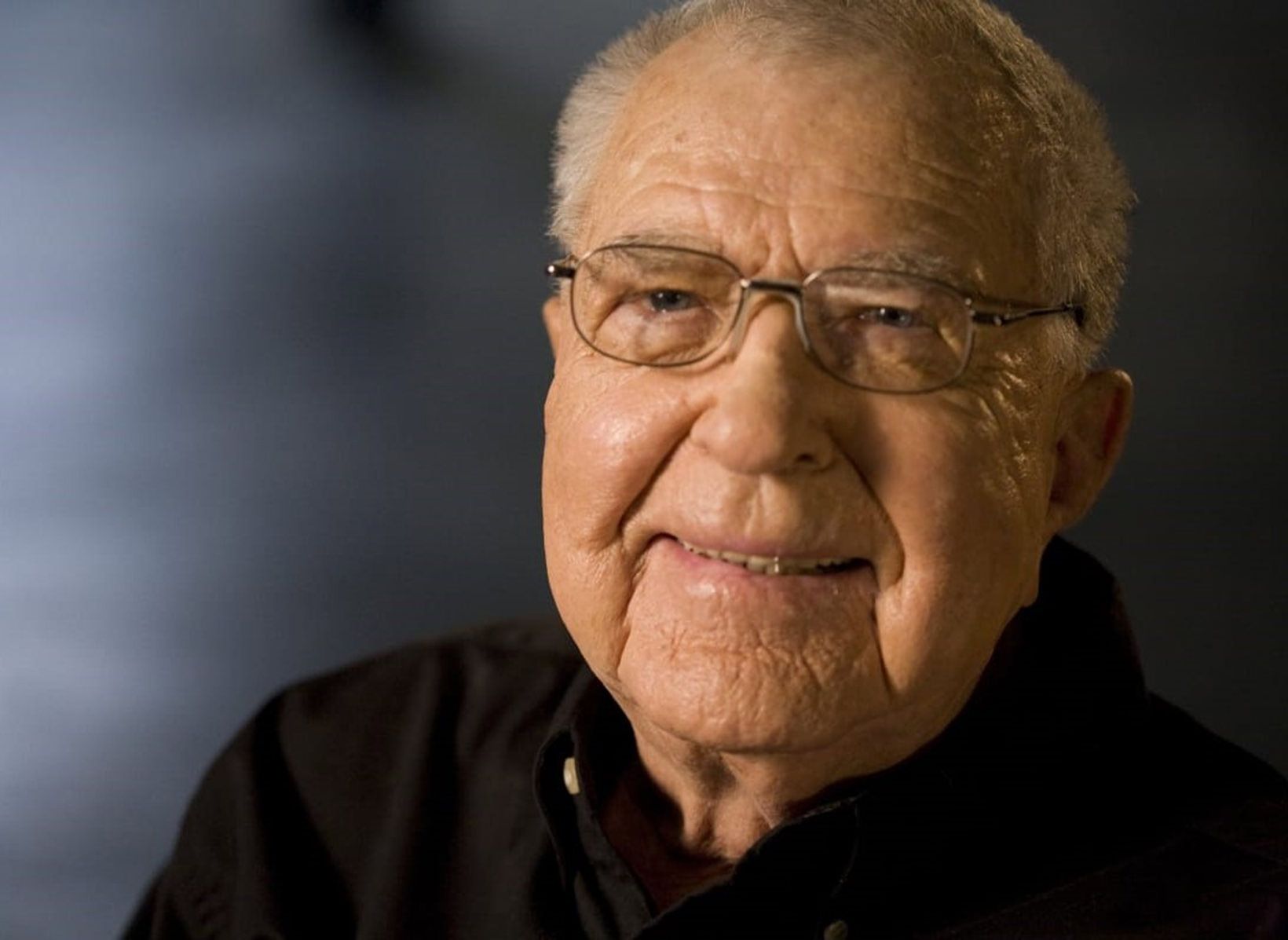 Retroautos is written and published with passion and with pride by David Burrell. All content is the copyright of Shannons, The Henry Ford Museum and Retroautos. Reproducing this content in any format is prohibited.