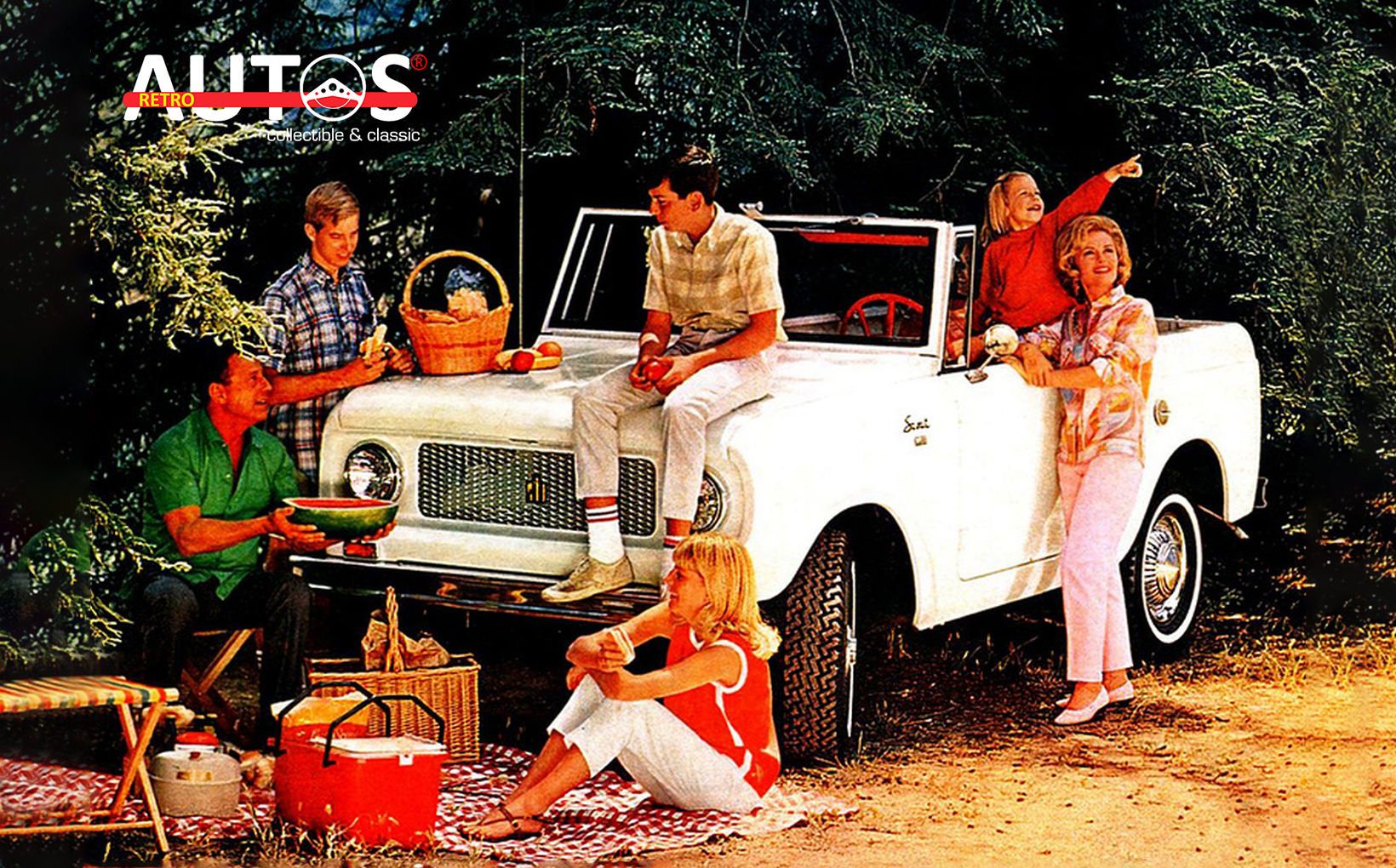 How’s this for an automotive product planning brief: “replace the horse”.

That’s what International Harvester (IH) designer Ted Ornas was tasked with achieving back in 1958 when his bosses decided to “out-jeep” Jeep.

IH’s market research, which was probably no more than an educated guess, had concluded that there was a market for an inexpensive, basic, go-anywhere farm and off-road vehicle that had a bit more style and a sliver more of comfort than the Willys CJ-5 Jeep, Land Rover and Toyota FJ25/40.

The project was given the code name “Scout”. With the addition of the number “80”, that designation stuck with the vehicle all the way into IH’s dealership showrooms.

It was supposed to have fibreglass panels, but early costings delivered a thumbs down verdict and steel was substituted. A good thing too, because panel damage and scratches were unavoidable where the Scout was intended to be used. 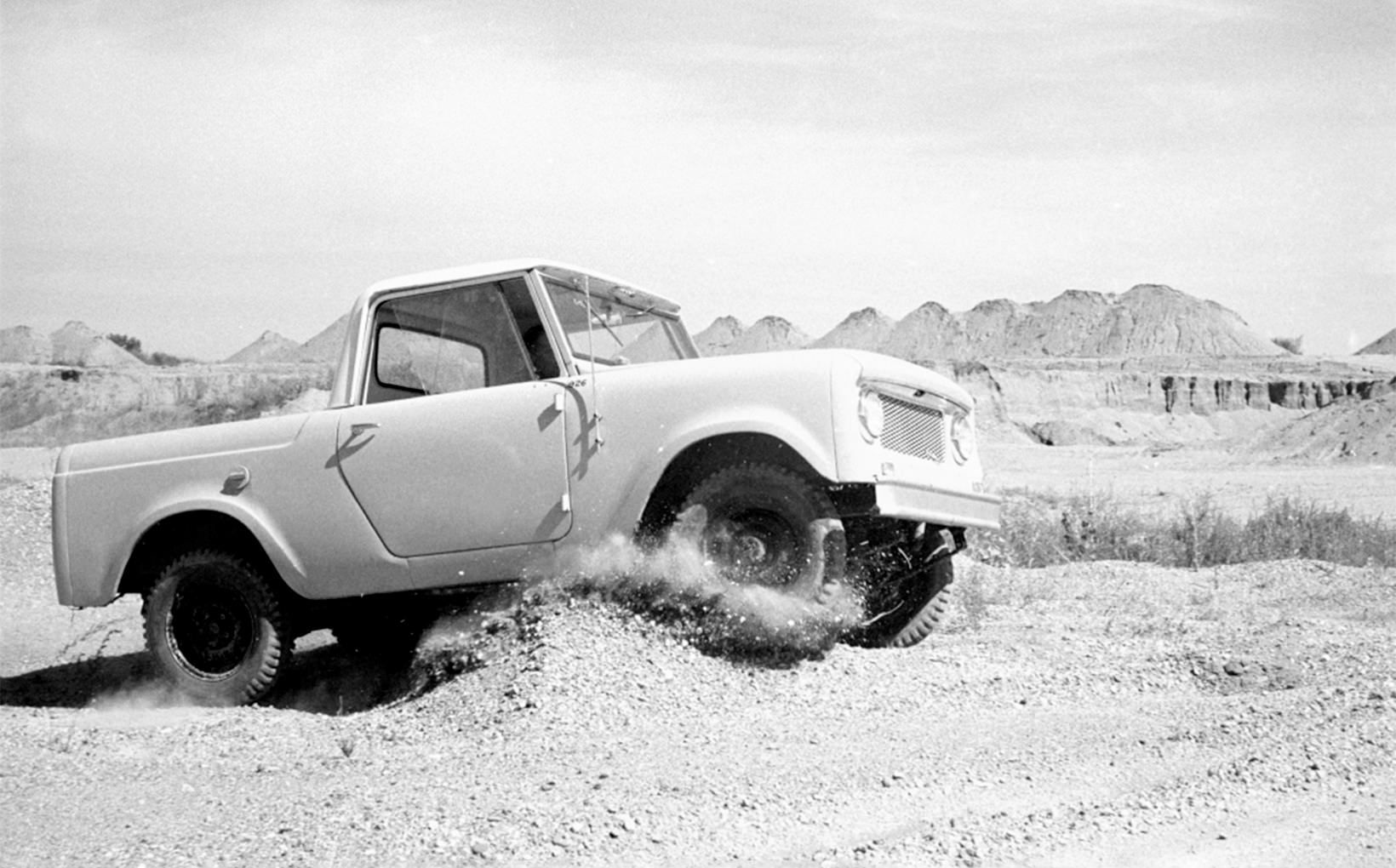 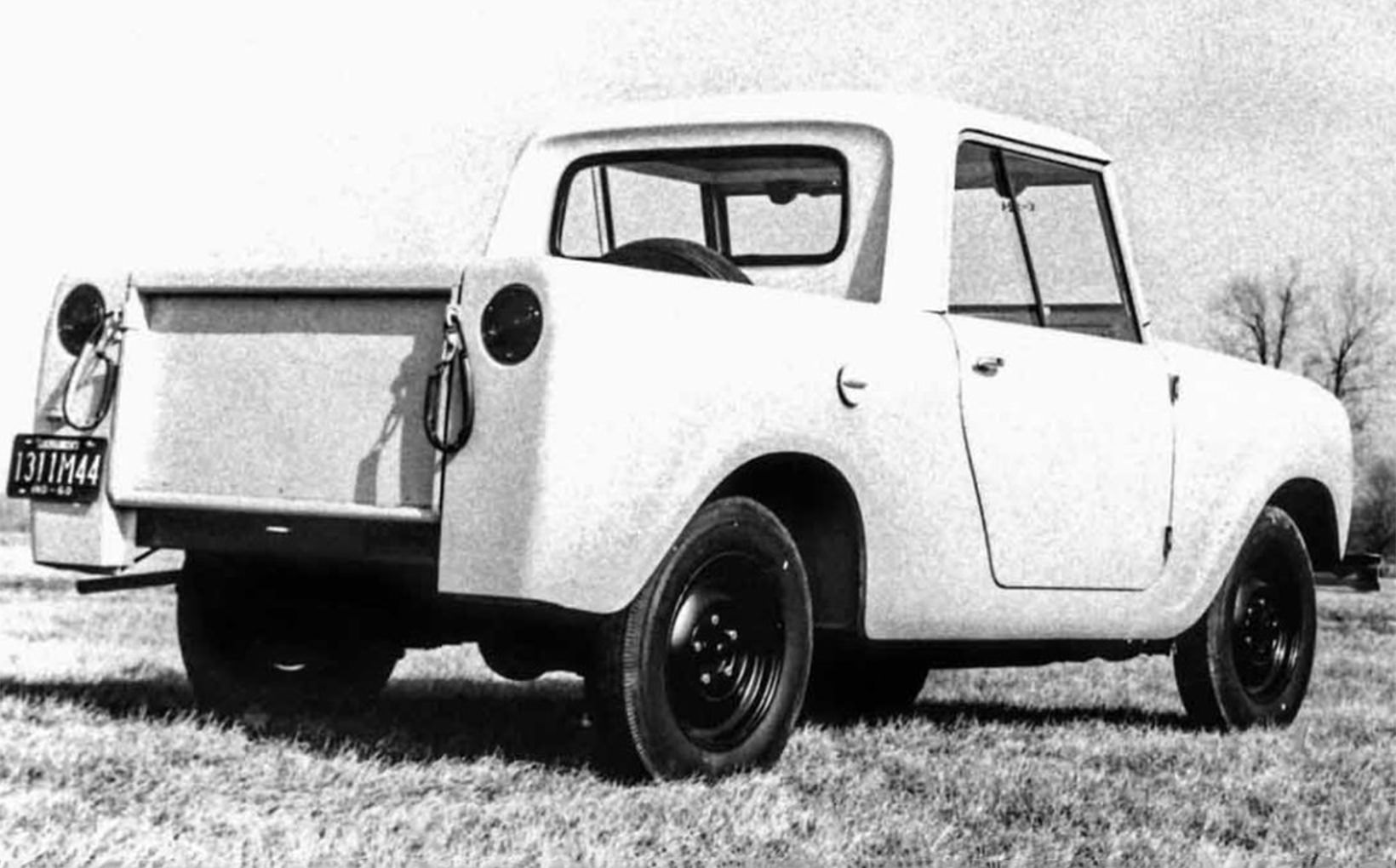 Two of the five operational prototypes of the Scout80 undergoing tests in 1959.

Five prototypes were constructed in early 1959. Two had BMC’s four cylinder 92 cubic inch/1.5-litre B-Series engine producing 50 horsepower. The others had a more powerful IH developed four cylinder engine, boasting a 152 cubic inches/2.5 litre capacity and 94 horsepower. The IH four was literally half of IH’s 304 cubic inch/5 litre V8, which was used as a stationary engine and in IH’s trucks and truck-based Travelall wagon until the 1980s.

The IH engine got the green light, as did Omas’s simple flat sided design with slightly rounded edges, which he’d first drawn on scrap paper on his kitchen table.

The Scout 80 was a real surprise for the motoring media and car buyers when it was released in November 1960. It was the most car-like vehicle ever produced by the Chicago-based maker of trucks and farm machinery, with a history that dated back to the middle of the 19th century.

For the history buffs, here’s the short version of IH’s rise to success. In 1834 Cyrus McCormick of Virginia patented his design for the horse-drawn reaper. The success of his company, the McCormick Harvesting Machine Company, attracted the interest of financier J.P. Morgan. He organised a merger of a number of smaller agricultural machinery companies, and McCormick, into one big conglomerate, IH. 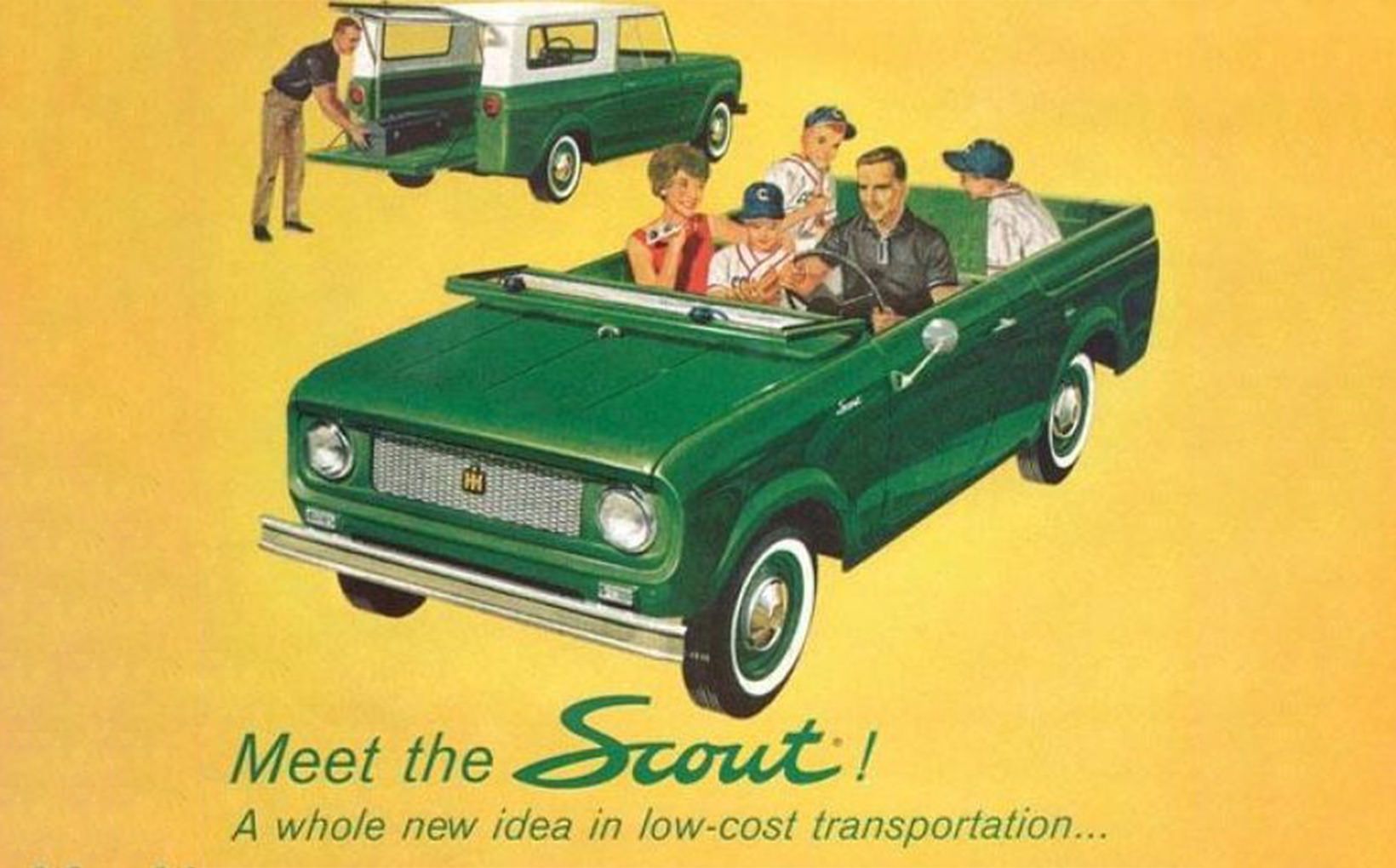 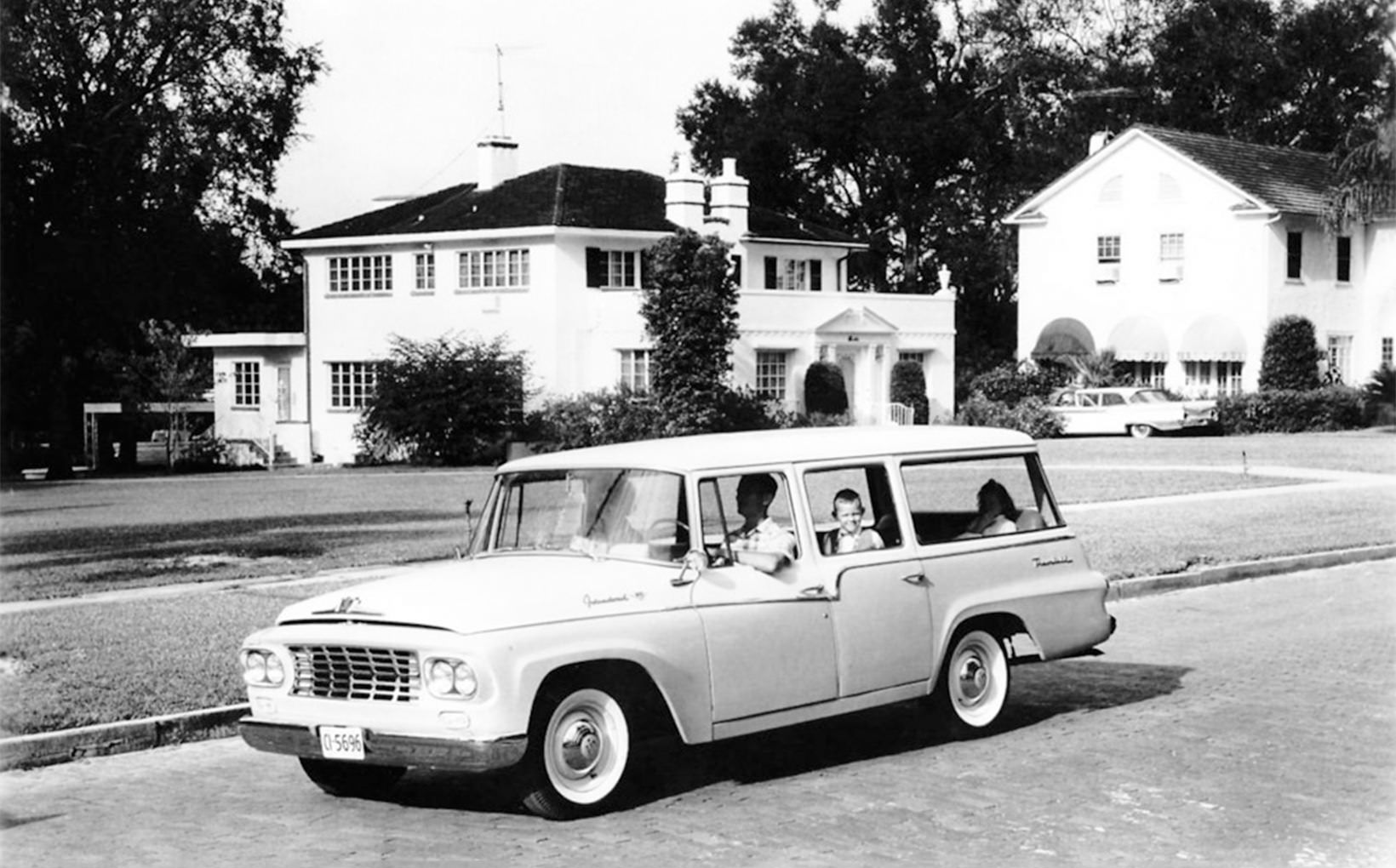 Early advertising of the Scout80 focused on its versatility and low cost. This hand rendered advertisement positions it as not much more than a family friendly World War II Jeep. The larger, truck-based Travelall is pictured in an up market suburban setting, circa 1961.

Ok, enough of the corporate backstory, let’s get back to the Scout 80.

It came in a 4X2 configuration and a more expensive 4X4 version. Two doors only. The wheelbase was a tight 100 inch/2540mm. It had leaf springs and drum brakes all round. Simple, sturdy and cheap.

There was a choice of five body versions. Buyers could select either a vinyl or steel Travel-Top, which extended from the windscreen to the tailgate. The advertisements suggested these were great for “in town” driving. For “on the ranch” there was steel or vinyl cab-top. For the fifth “fun” configuration, IH suggested removing the top.

“Comfort” items included sliding side windows, a fold-down windshield, vacuum wiper fixed at the top of the windscreen and two front seats. The doors were frameless and removable. Back seats were available, at extra cost.

The reaction of customers was positive and immediate. Most of the initial production was focused on the two-wheel-drive pickup versions, because this is what IH managers predicted buyers would want. Wrong. 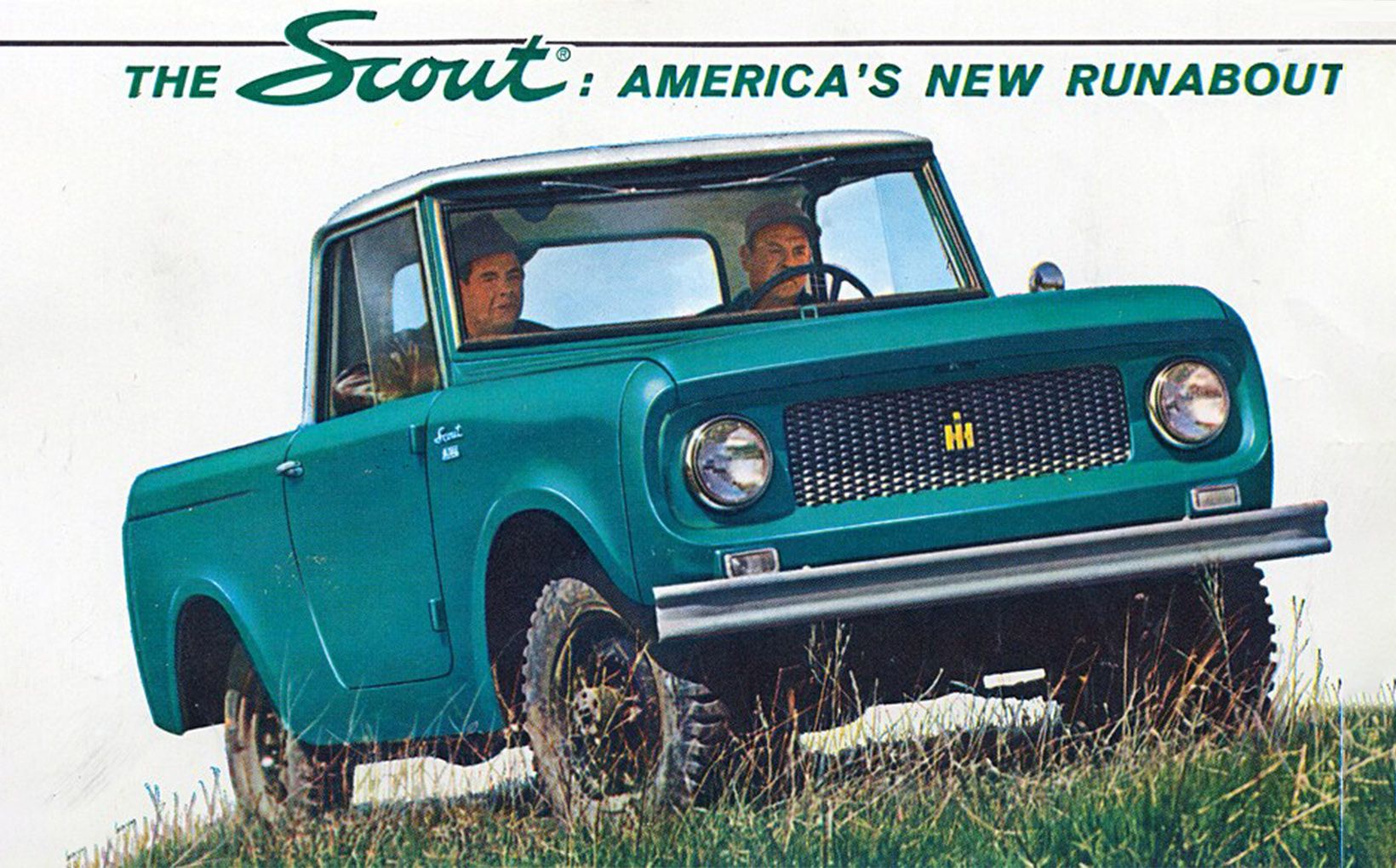 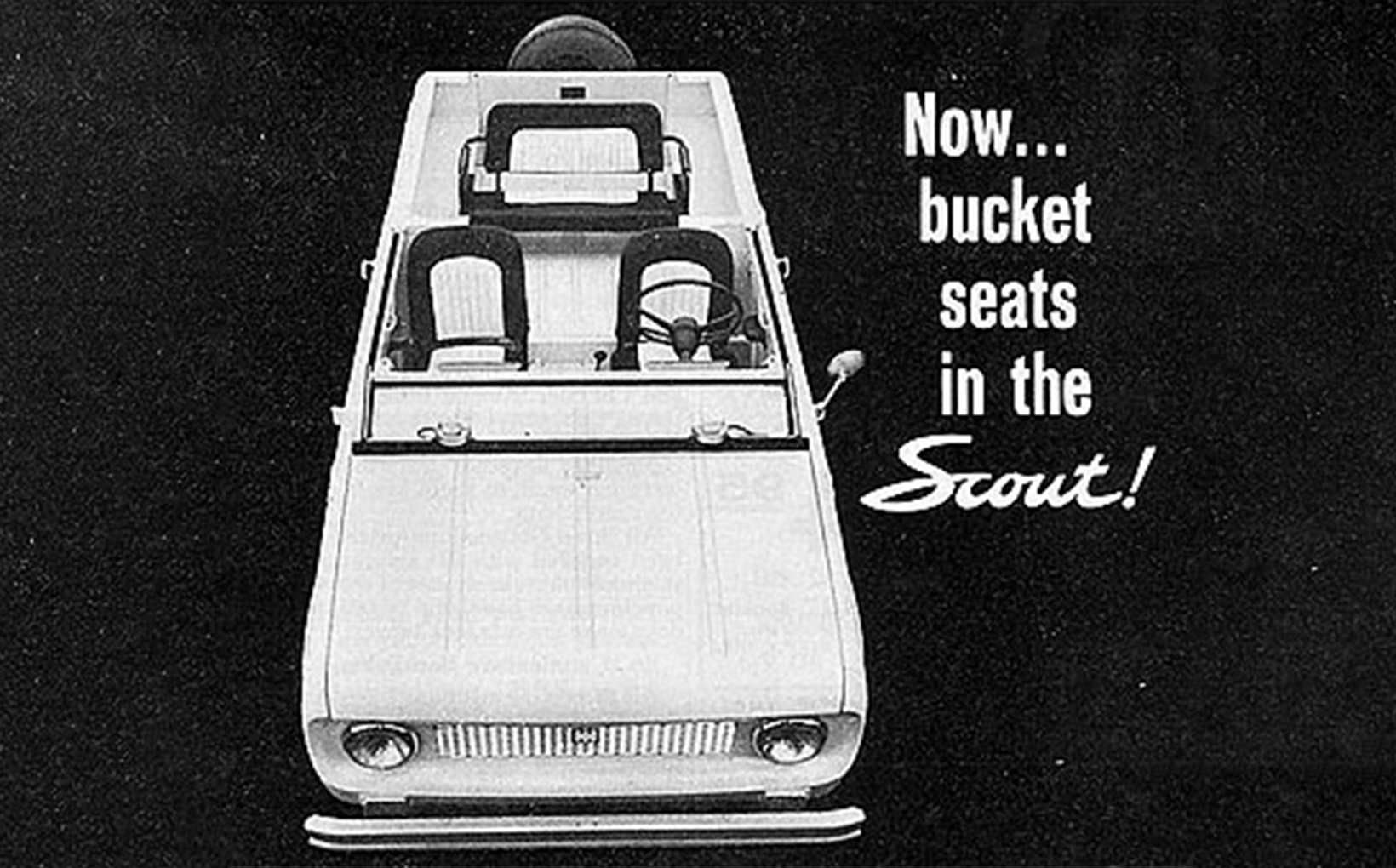 Demand was strongest for the 4X4 Travel Tops. and IH soon realised that their little Scout was not only competing strongly against Jeep’s models but it was also taking sales from everyone else, particularly in rural areas.

It gained a reputation for strength and go-anywhere capabilities. It had, in many ways, lived up to its design brief to “replace the horse”.

By the end of 1962 IH had sold 35,000 Scouts, easily outselling any other IH vehicle in the company’s history. They reached 100,000 sales in 1964. That was not many when compared to the Big Three in Detroit, but for IH this was a bonanza.

To celebrate the milestone, IH released a special edition called the Red Carpet. Resplendent in pearlescent white paint, a red interior and red carpet only 3,000 (3,400, some say) were produced. Try finding one today. As rare as. 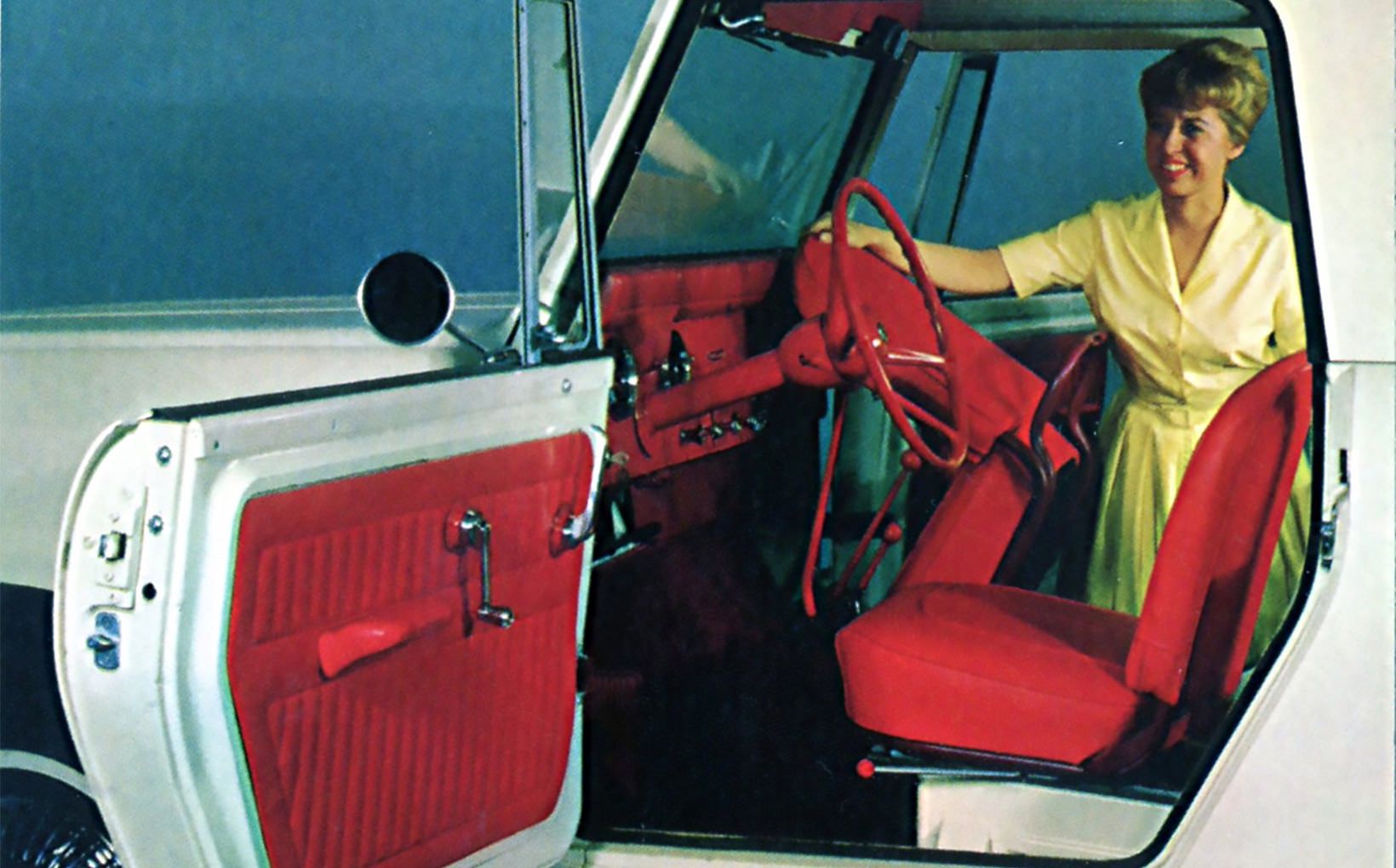 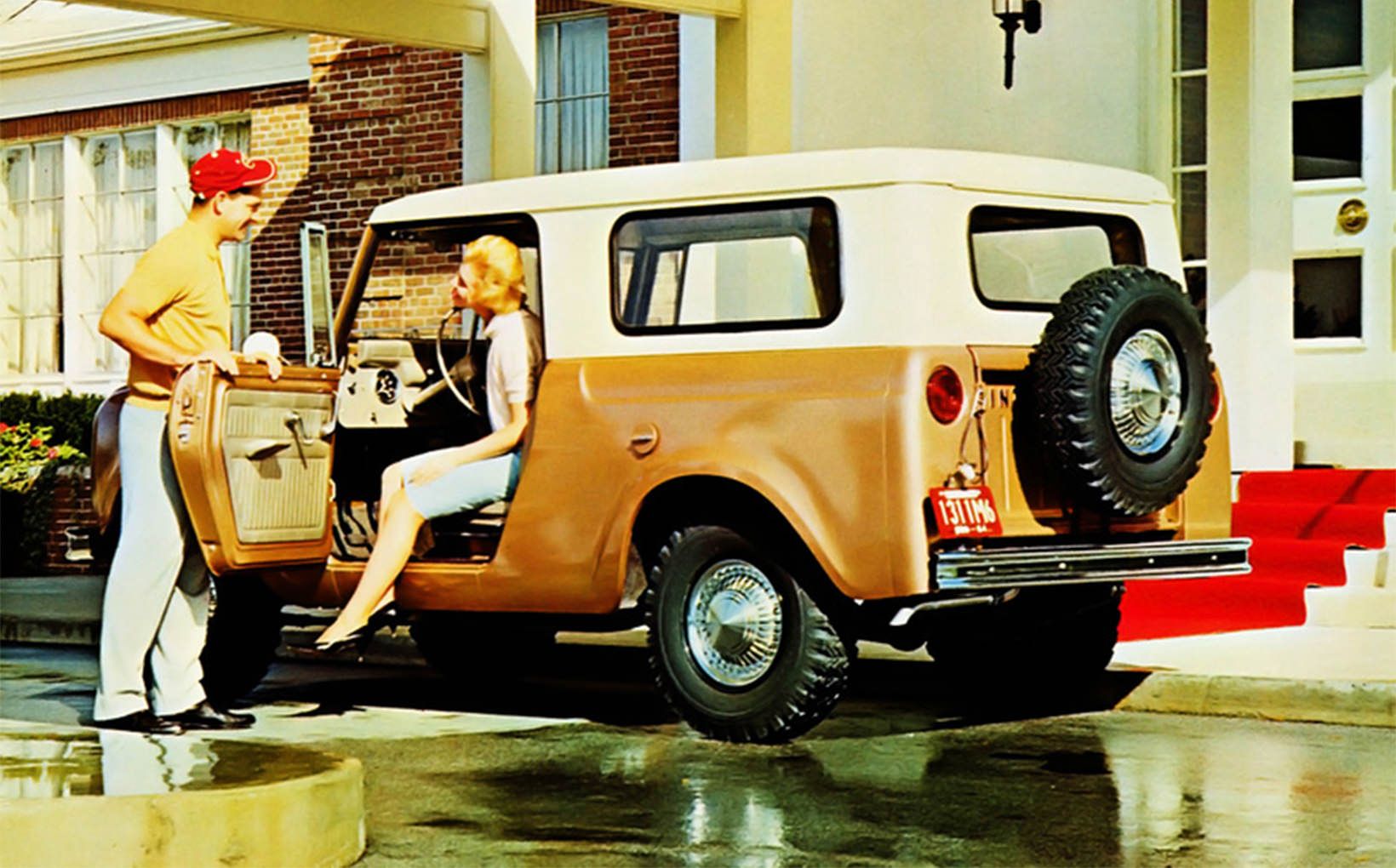 A sequence of special models followed the Red Carpet, starting with the Champaign in 1965. It was a Red Carpet with different colours. Others included the Aristocrat (1969), Comanche (1970) and the SnoStar (1971). From 1965 onwards the Scout came with wind up windows and a better heating system. 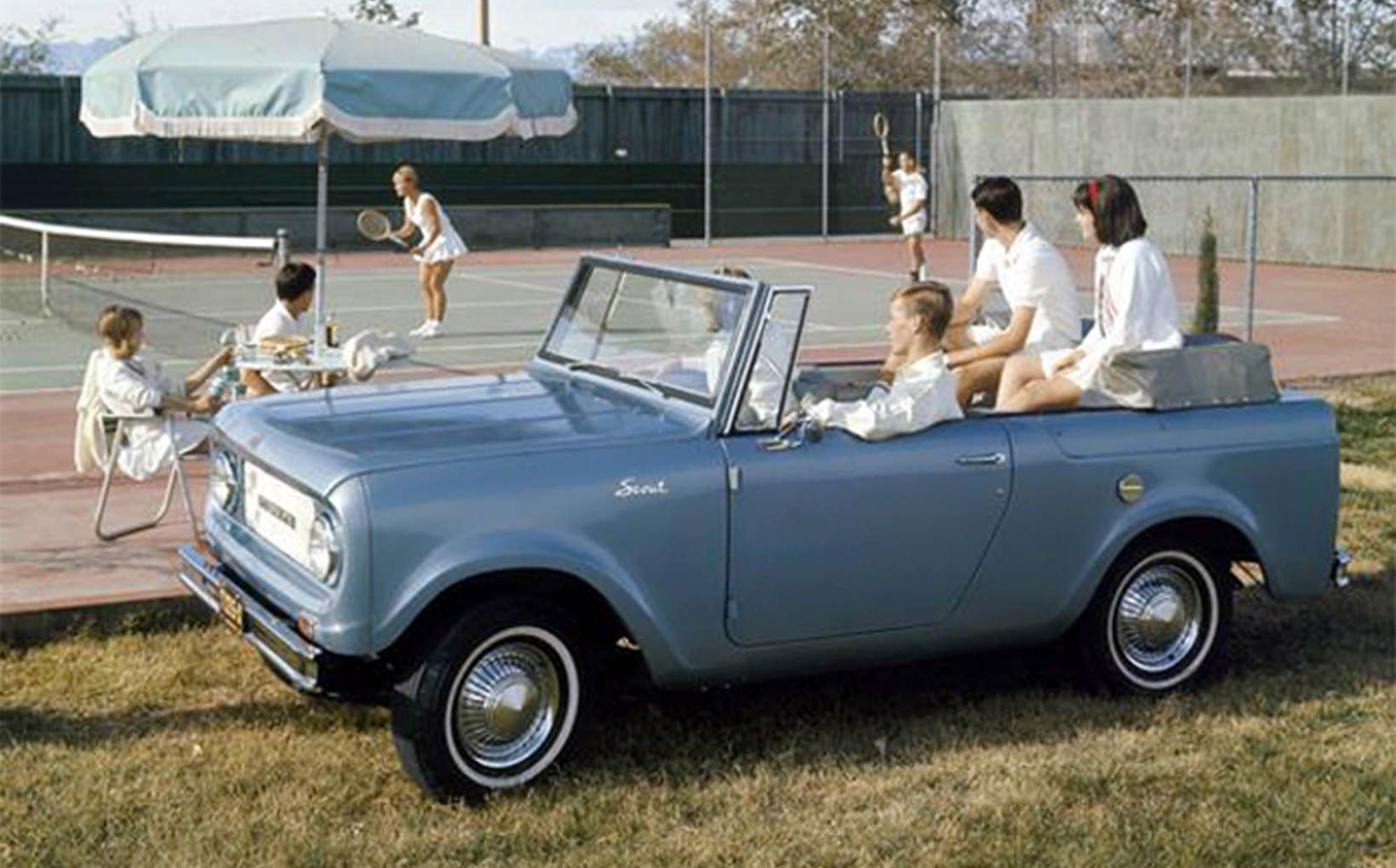 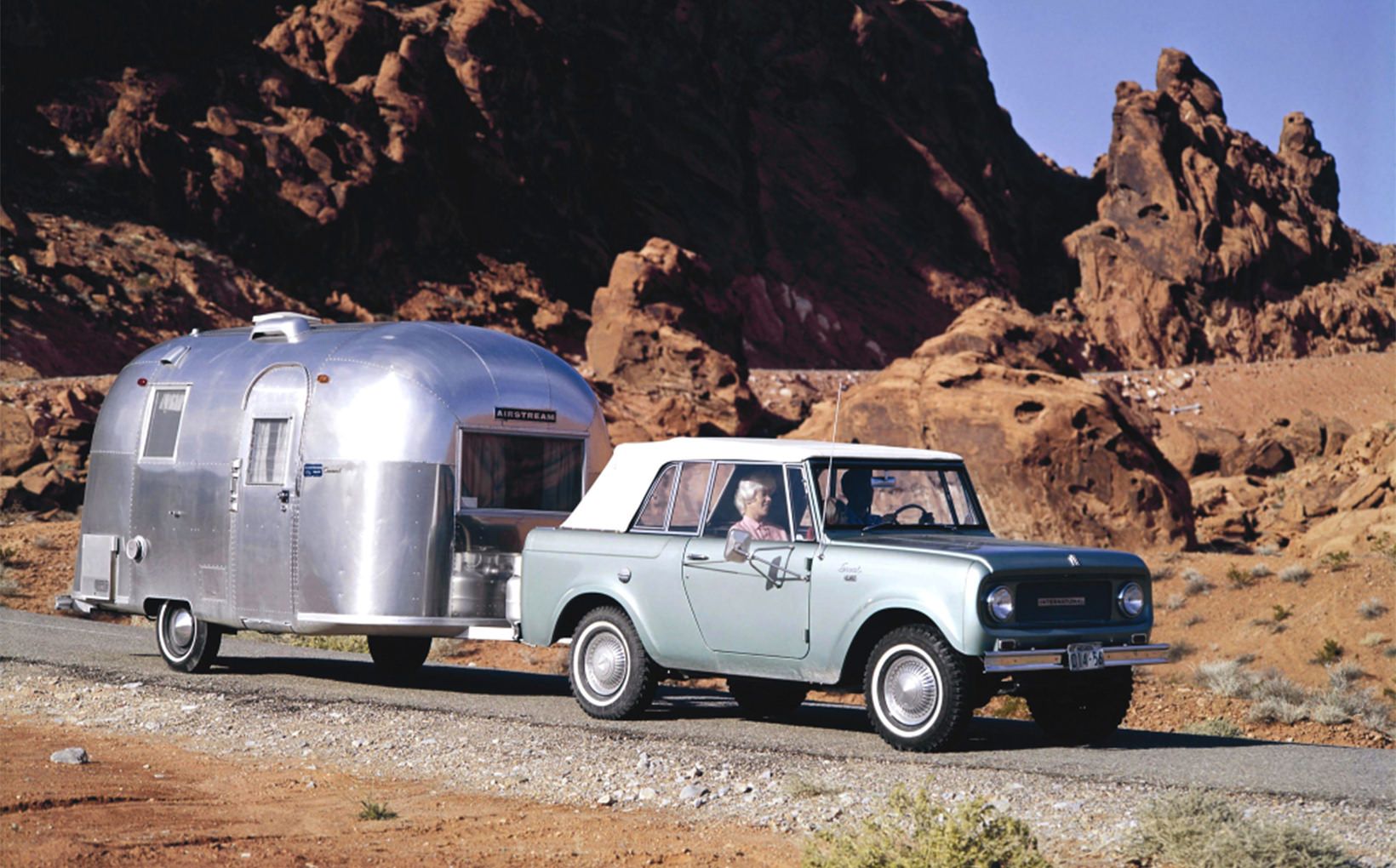 By the mid-sixties, IH was positioning the Scout as a car for everyone, from teenagers to grey nomads.

The Scout’s early success was noticed, especially by Ford. In 1963 they started work on their version, the look-a-like Bronco. Released in 1966 it went on to be a sales success. 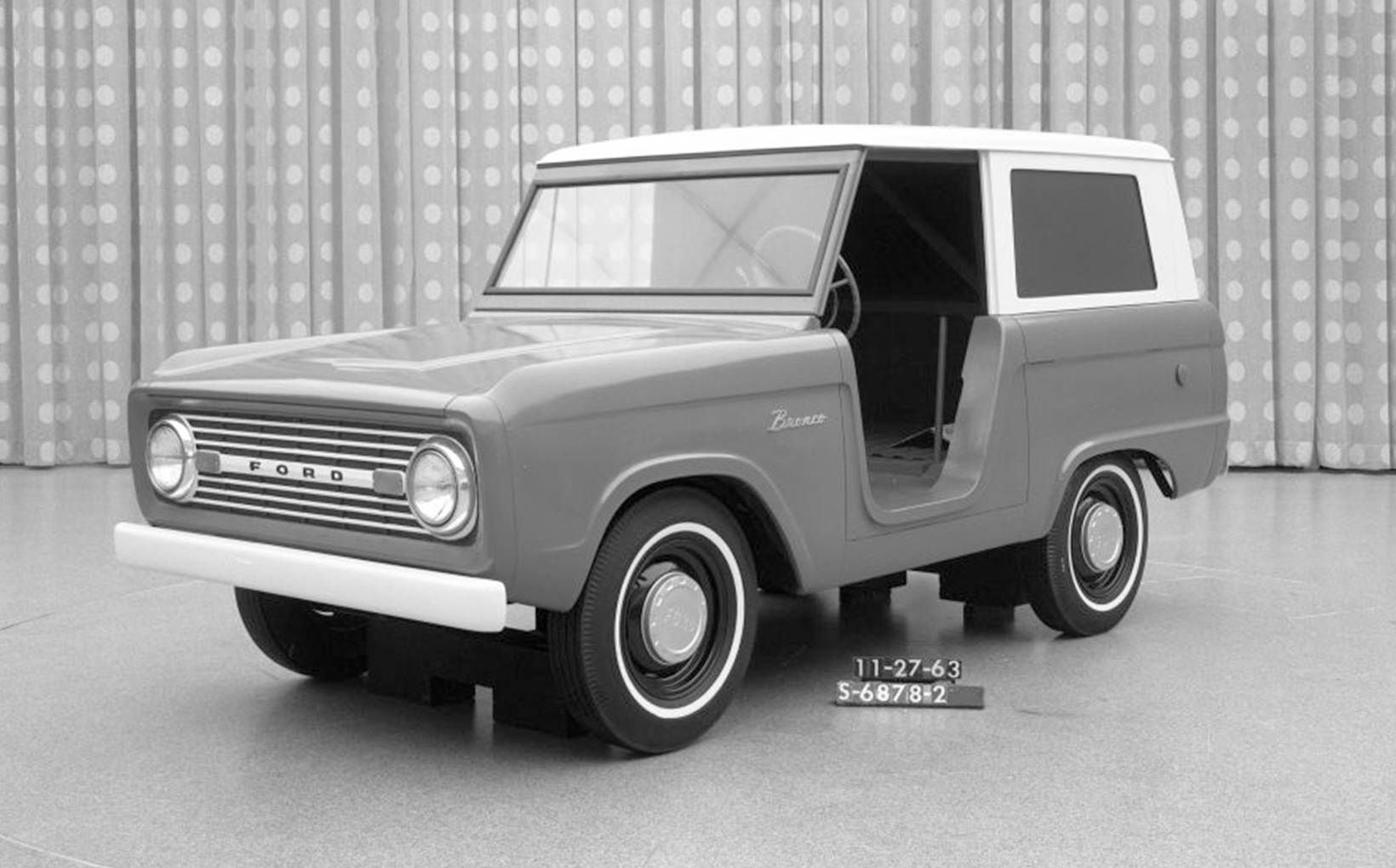 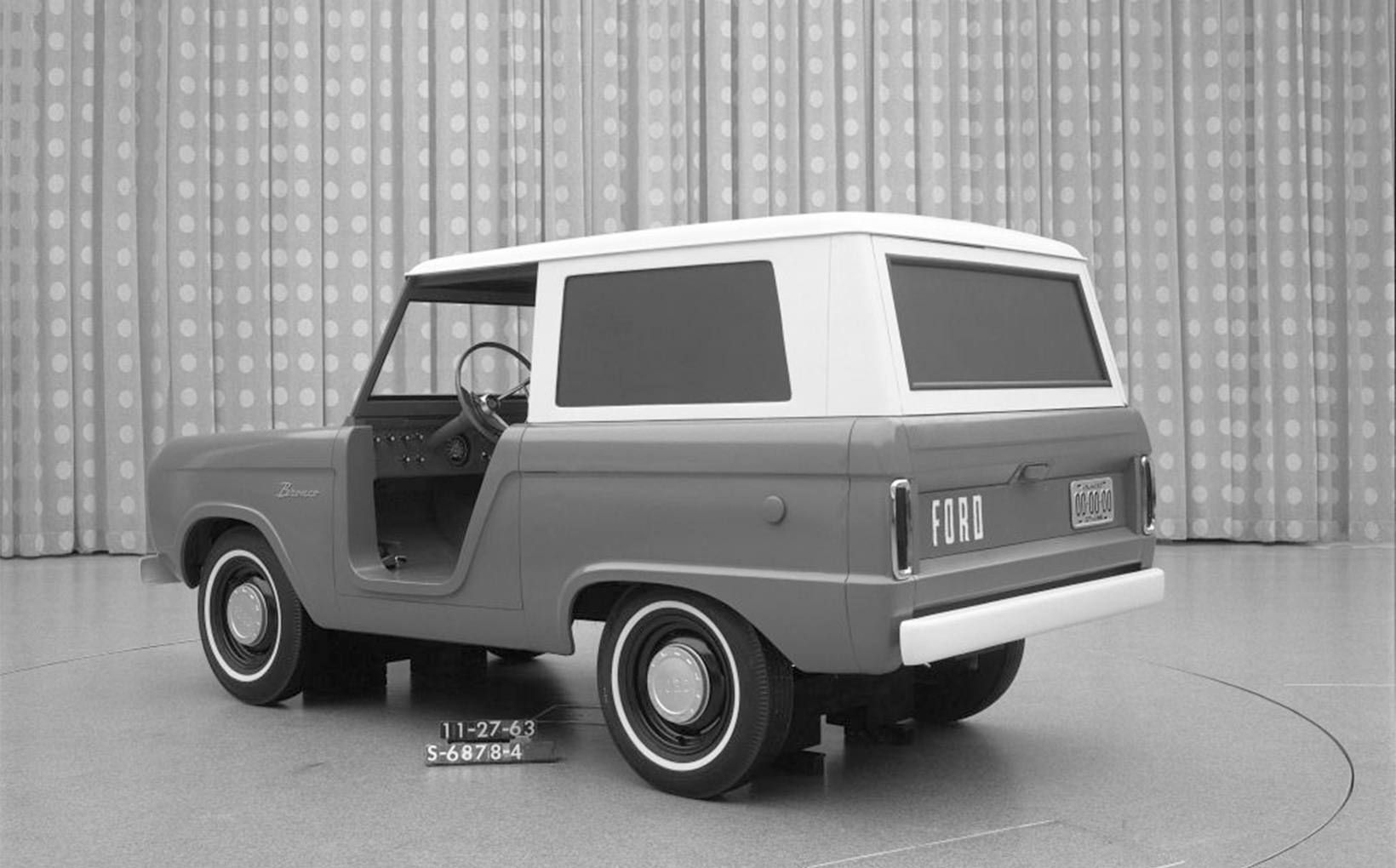 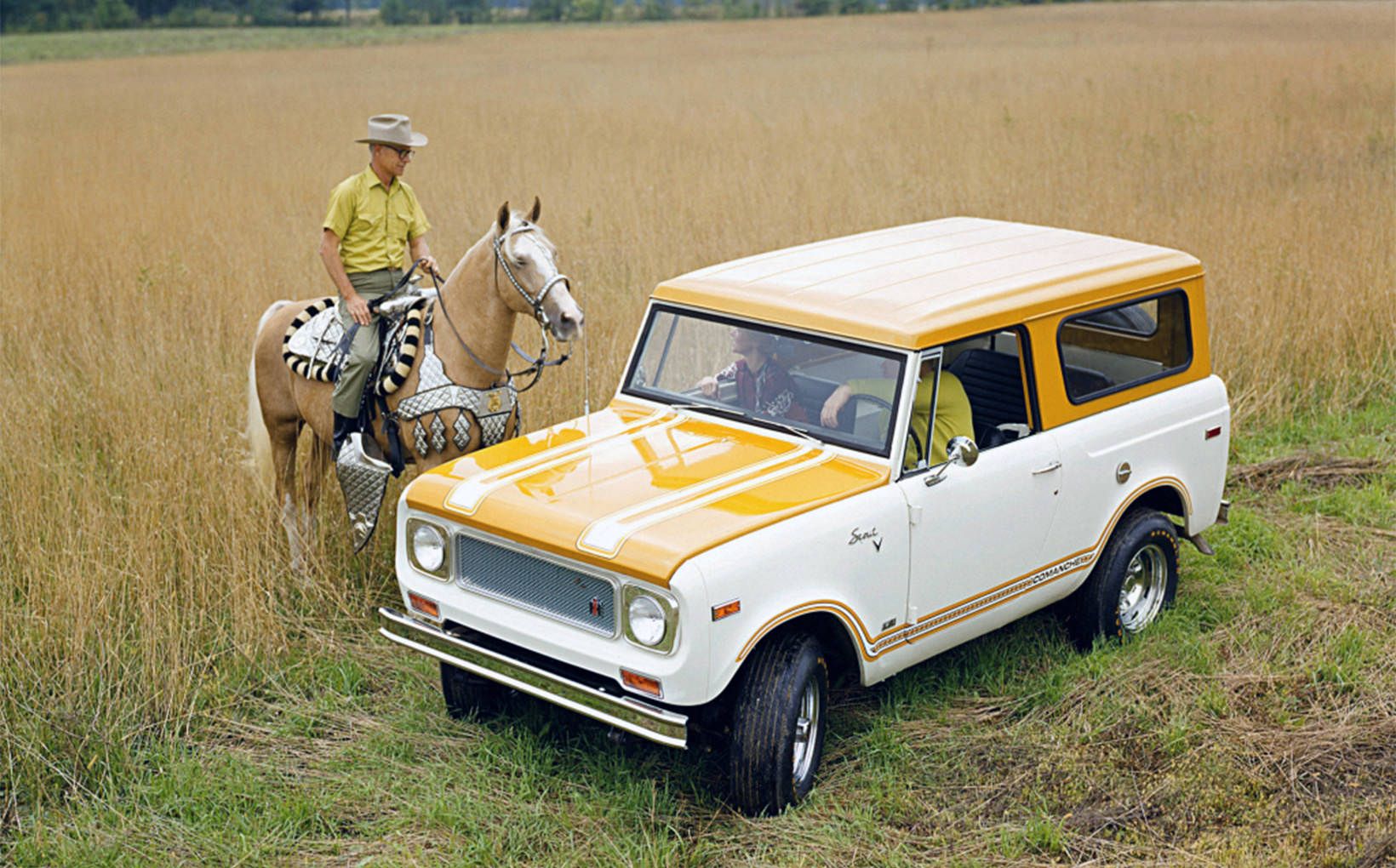 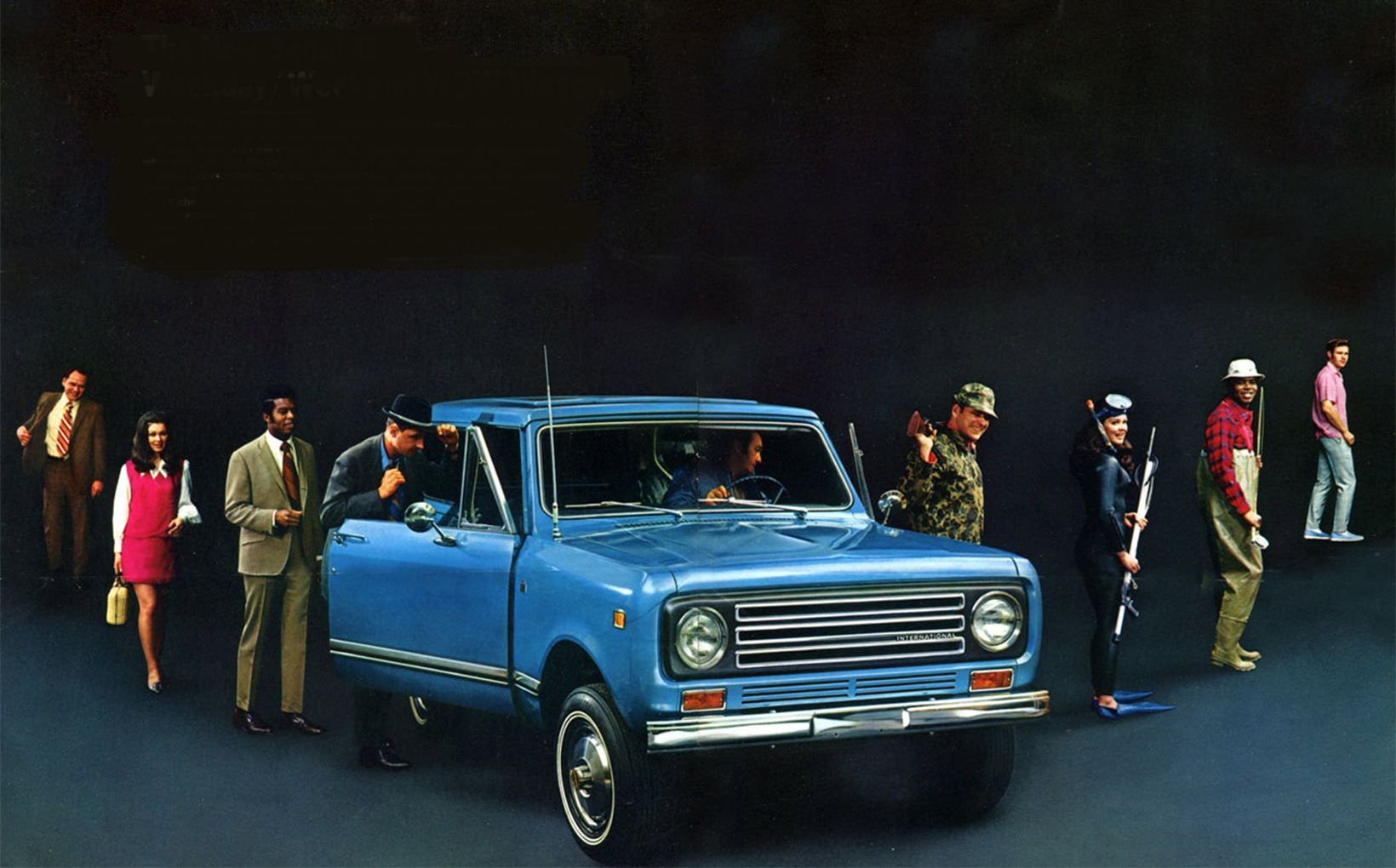 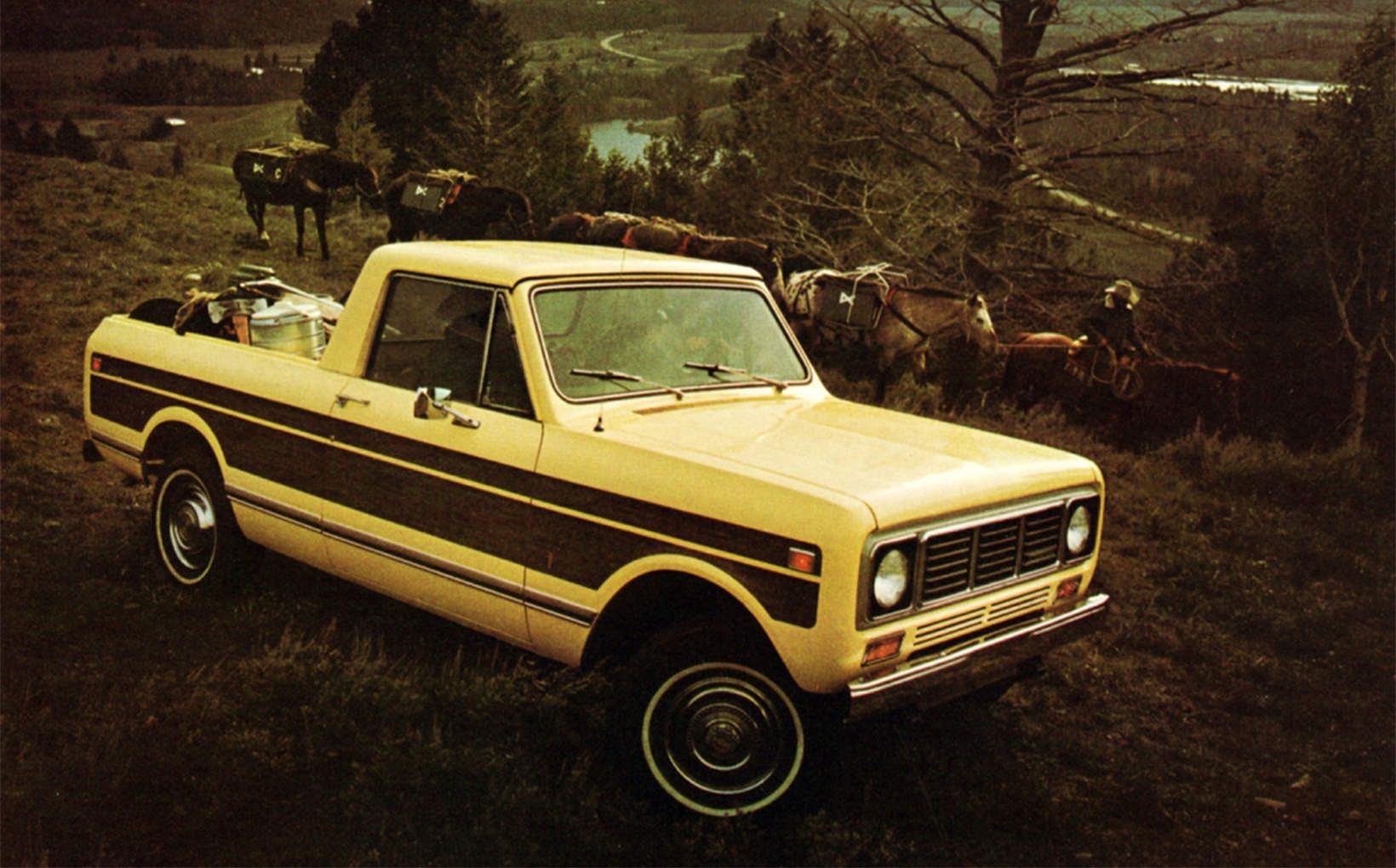 A decade after its release, the once low cost vehicle was available with a long list of luxury options. Here’s the 1970 Commanche special addition and the 1972 and 1976 Scouts.

As the years progressed the Scout gained more “comfort” features and a more car-like appearance. The 266 cubic inch/4.5 litre V8 option arrived in 1967. A Borg-Warner automatic was offered from 1969, behind the 304 cubic inch/5 litre V8. Also available was a new “sportier” roof line.

The Scout II appeared in 1971. A long wheel base (an extra 18 inches/457mm) model Traveler, was created in 1977 to replace the now retired Travelall. 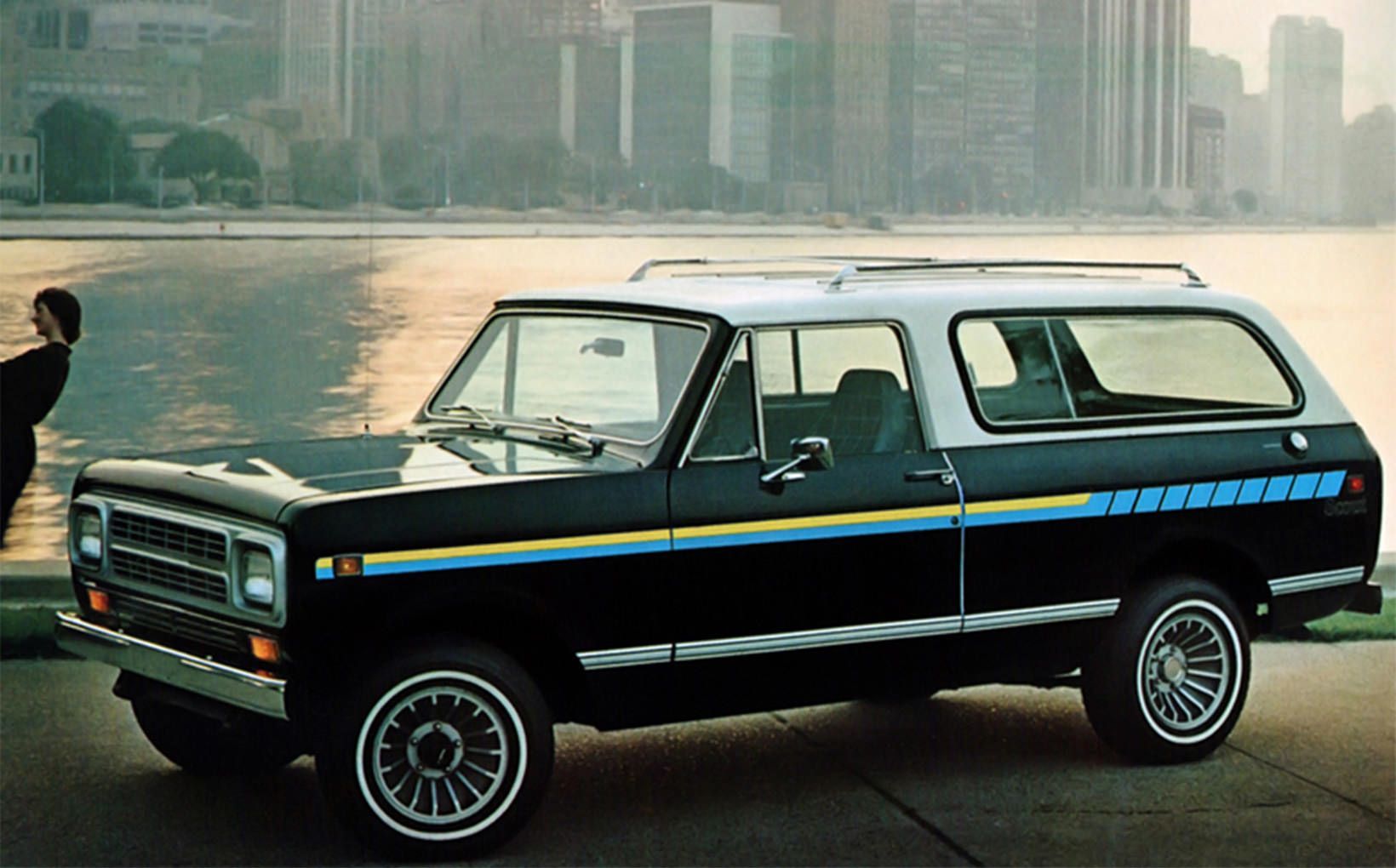 The 1977 Scout Traveller replaced the old truck-based Travelall. The timeless lines of the Scout can be seen in many 21st century SUVs.

The 1977 Scout SSII was a stripped back “sports” model, design to compete with a revitalised Jeep, which its advertising called a “sports utility vehicle.”

IH’s also started sponsoring desert racing teams, to build on the successes privateers were having racing Scouts in the deserts. In 1977, an unsponsored Jerry Boone drove an SSII to victory in the 4×4 class at the Baja 1000.

But IH had two problems. In the late 1970s the Scout was showing the engineering weaknesses of a vehicle design two decades earlier. At some point it would need a major and costly re-design in order to fight off the surging sales of Jeep, Ford’s Bronco and GM’s twins, the Chevrolet Blazer and GMC Jimmy. 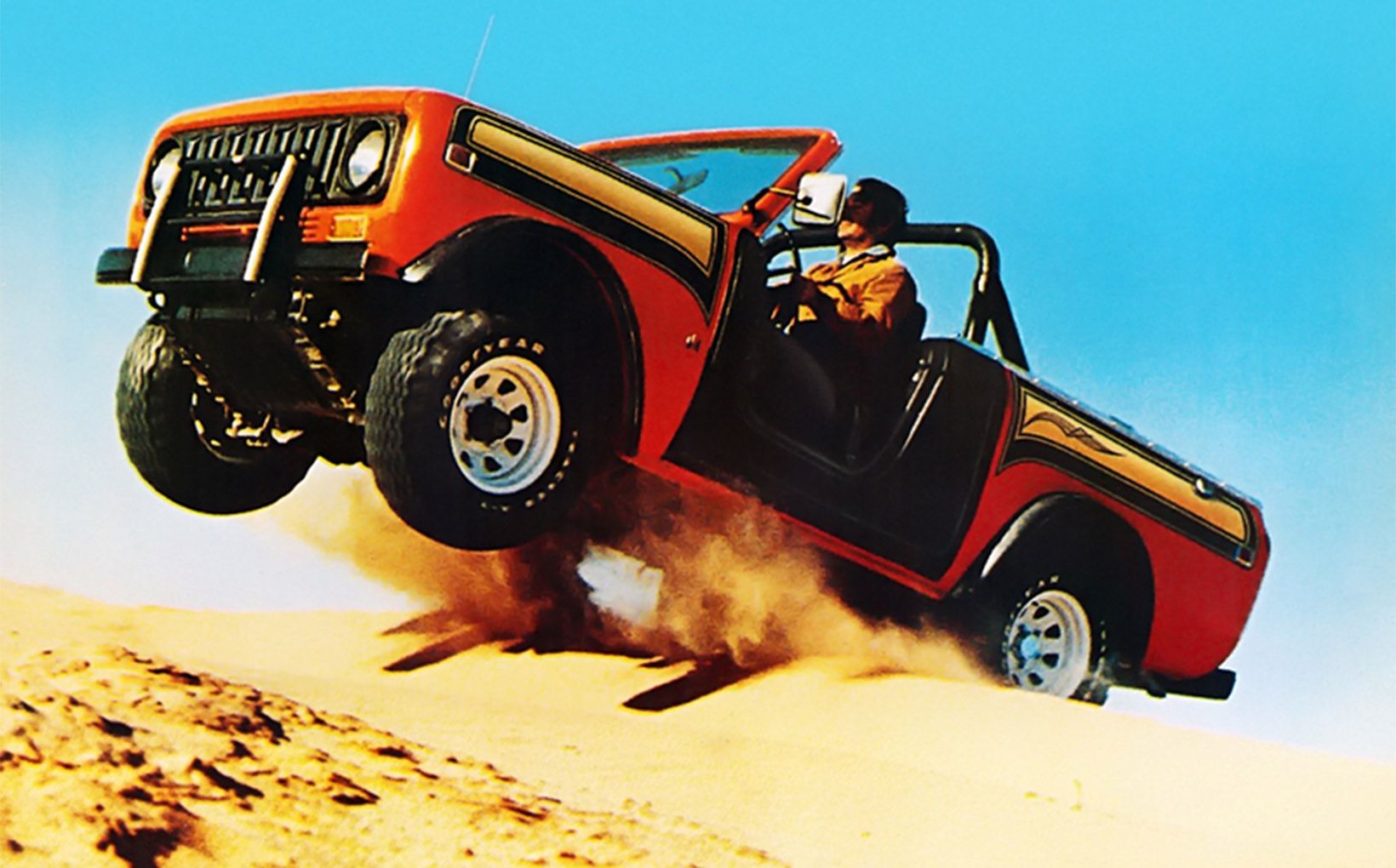 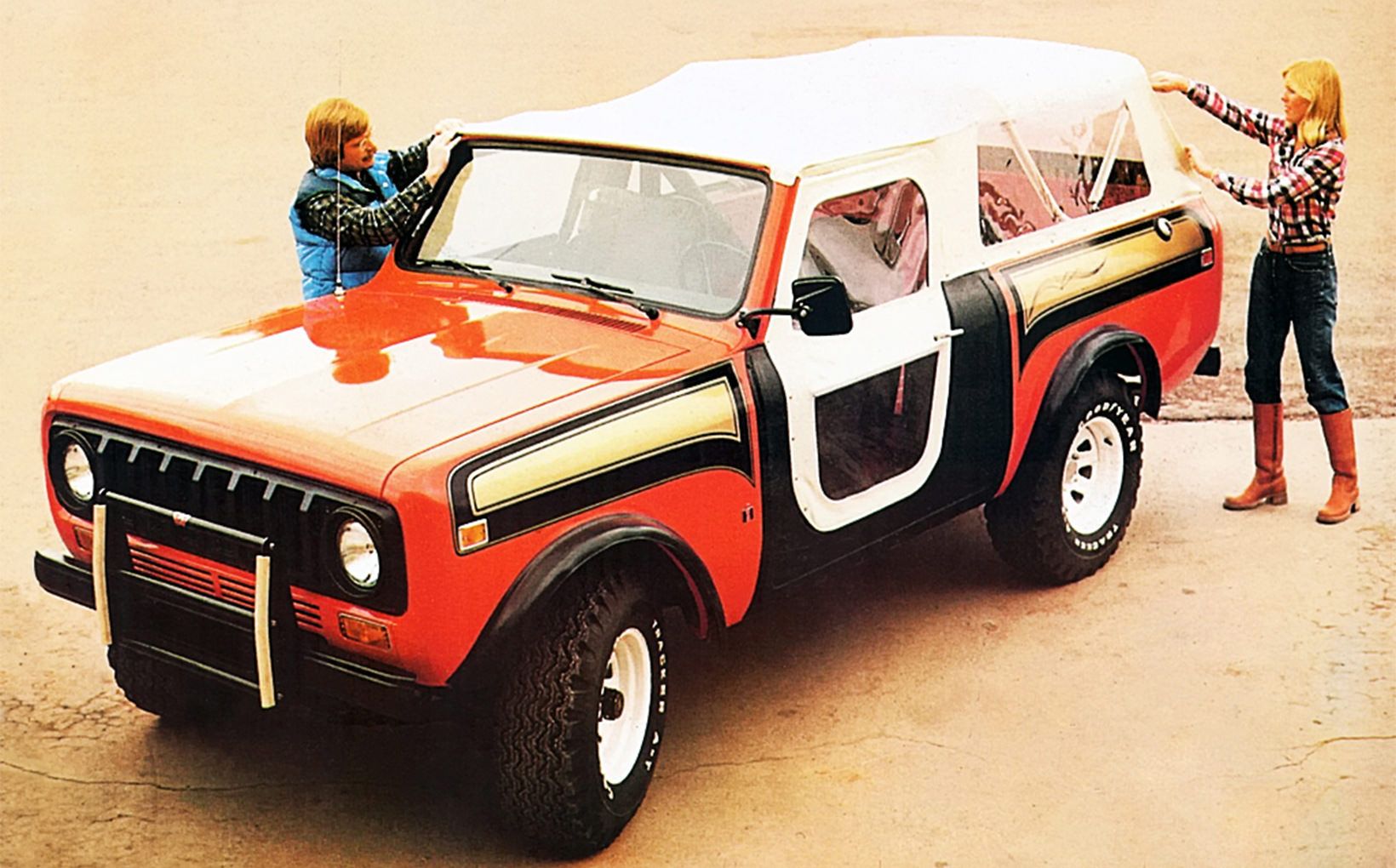 The Scout SSII was a belated recognition of the success privateers were having in off road racing.

The second problem was that IH’s agricultural products were not delivering the profits they once did. By 1979 IH was running short of cash and costs were being slashed. A six month strike at IH’s factory did not help matters.

Unfortunately, the Scout was part of the cost cutting program. The last one rolled off the production line in October, 1980.

Scouts began selling in Australia not long after they first appeared in the USA. The simple layout meant conversion to RHD was uncomplicated. Even as late as April 1980 the advertisements were still being placed by IH Australia.

Classic IH vehicles and machinery have a strong and loyal following here. The International Harvester Club of Australia boast nearly 1000 members and partners. There are Scout clubs in most states.

The Scout has always been a cool classic to own. More so now because it has been out of production for so long. The simplicity of the styling is timeless, and still has an influence today.

Although Ford may say otherwise, I reckon the 21st century Bronco owes much of its styling cues to the original Scout. 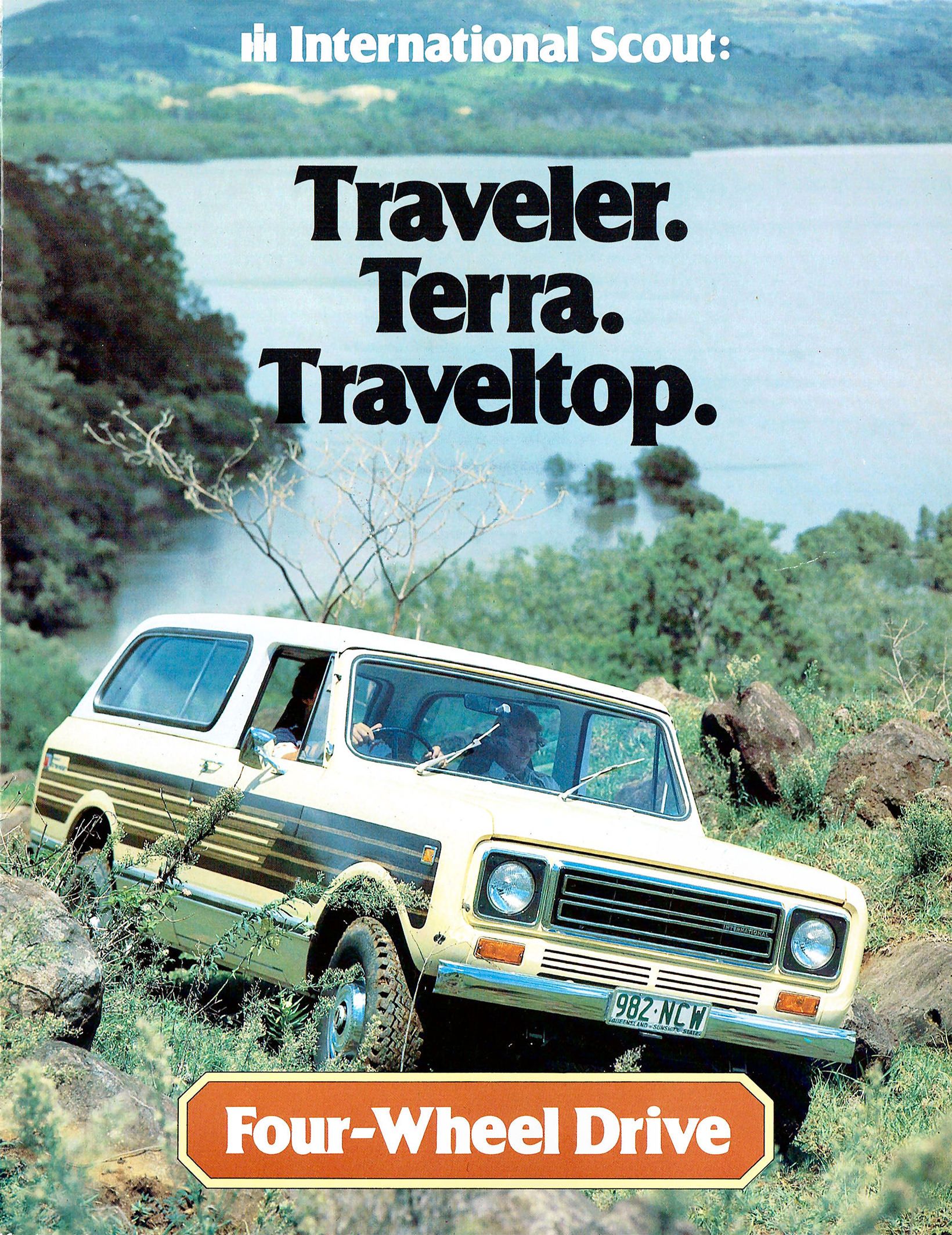 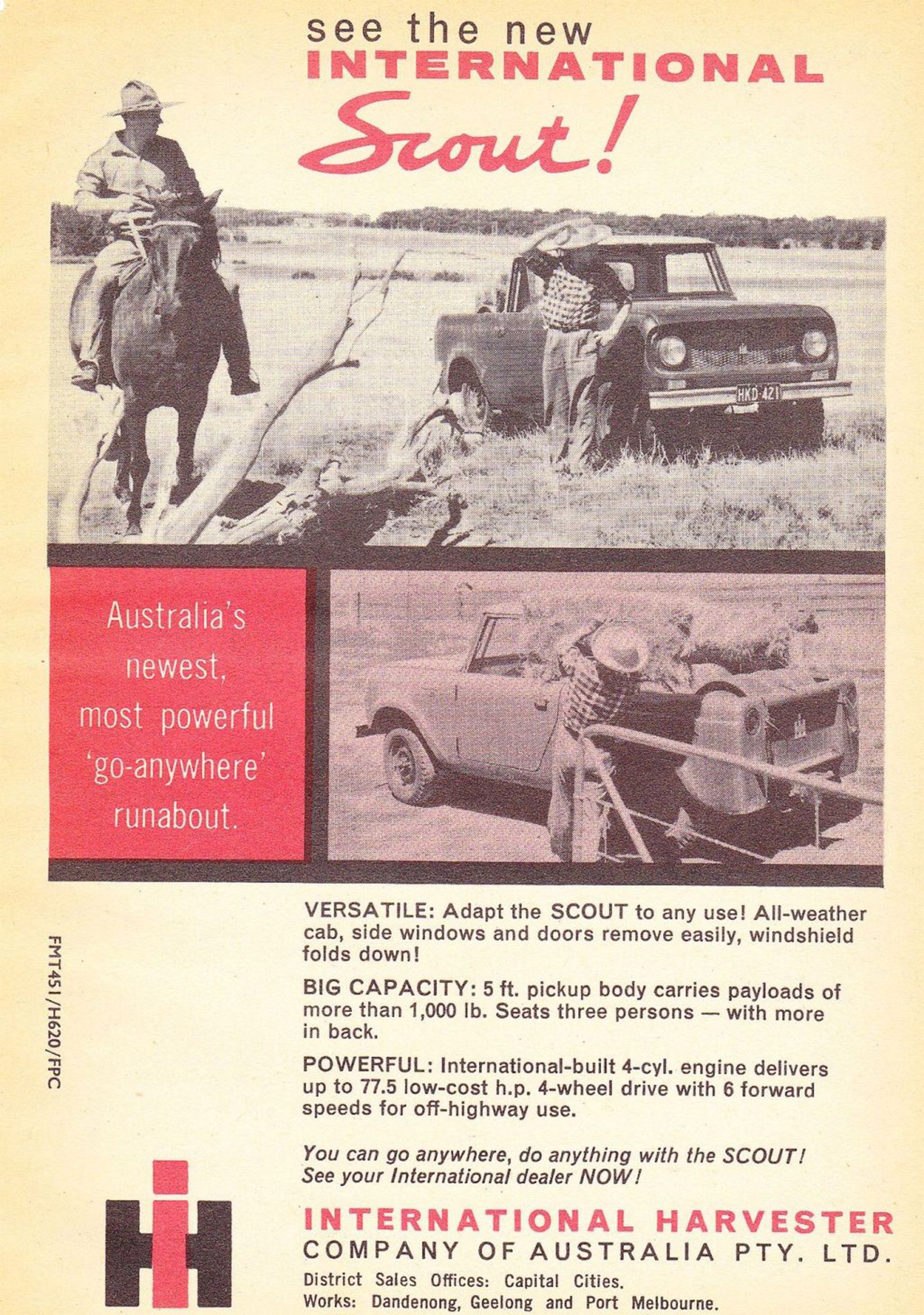 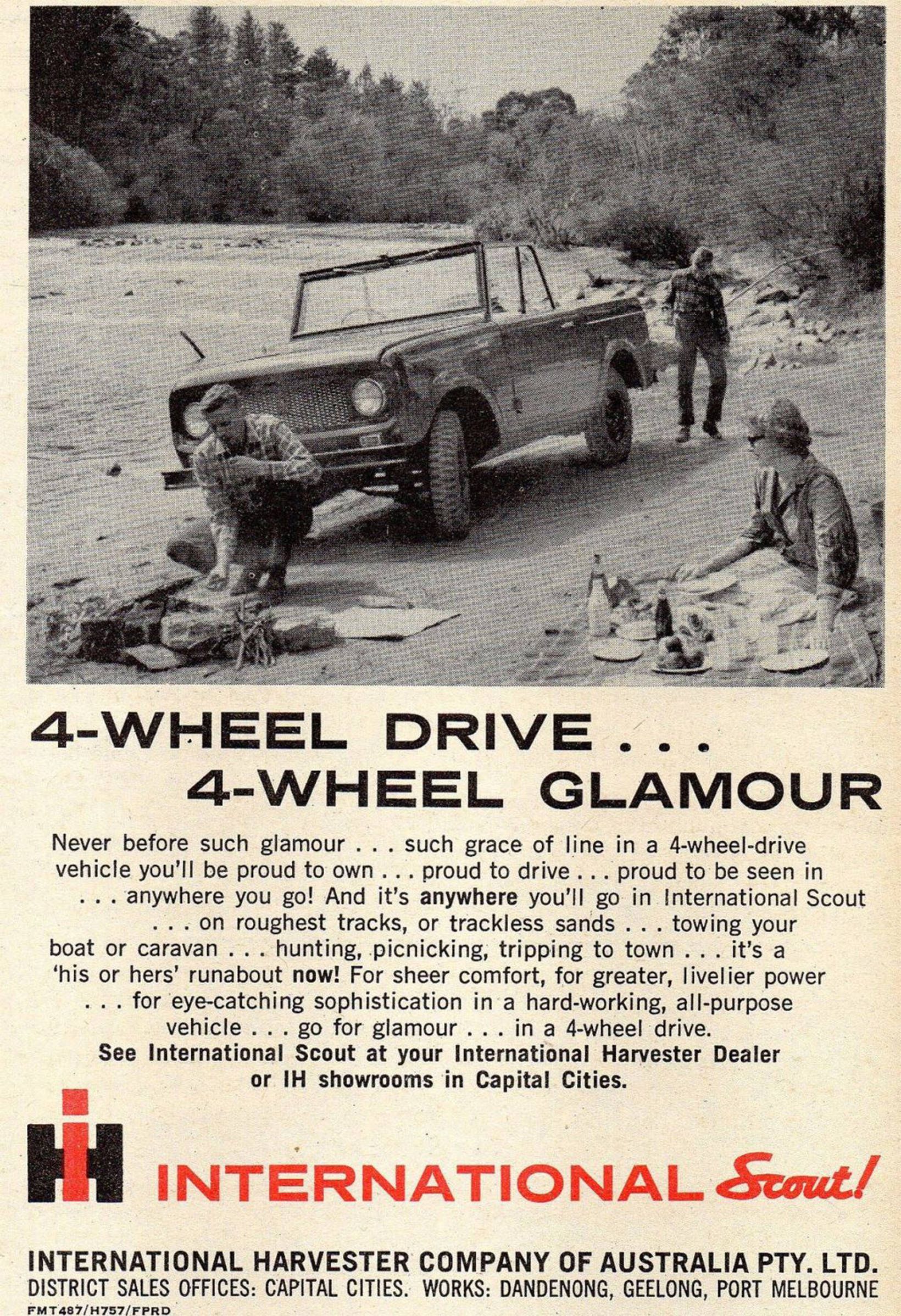 Scouts were sold in Australia not long after their American debut. They continued to be sold here until production was halted in October 1980 in the USA.