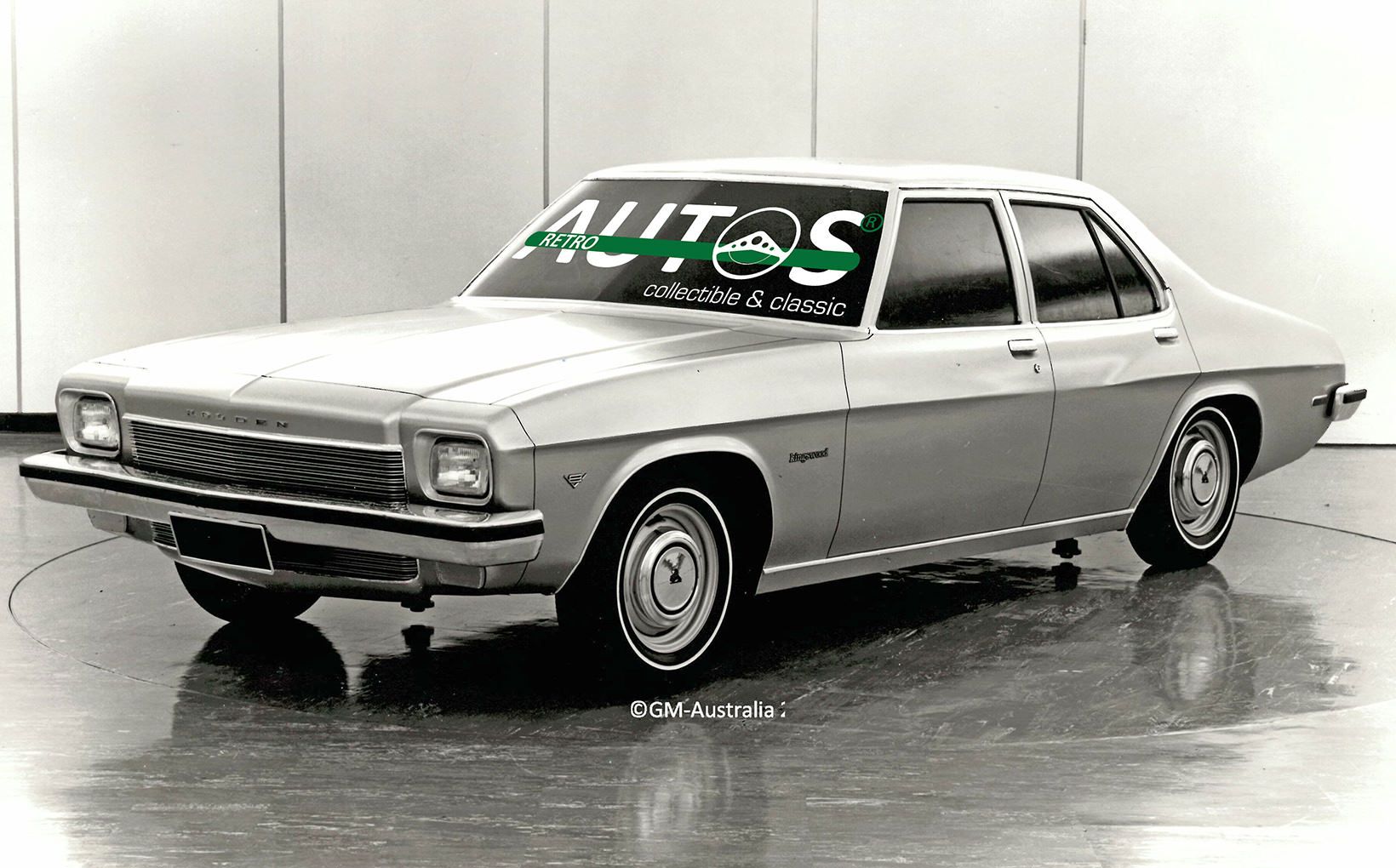 When the HQ was released in July 1971, Holden had an uncomplicated long-term plan for its mainstream range of family sized sedans, wagons and commercials. The HQ would be followed by a mid-1973 styling update, the HV, and another facelift in 1976. An all-new model, the WA, was scheduled for 1978, which would take the company into the 1980s.

But the HQ’s successor did not arrive until October 1974 and was known as the HJ.

Why the delay? What happened to the HV?

I go behind the high security doors at Holden’s design studios to reveal the photos of the never released HV and explain why it was cancelled. 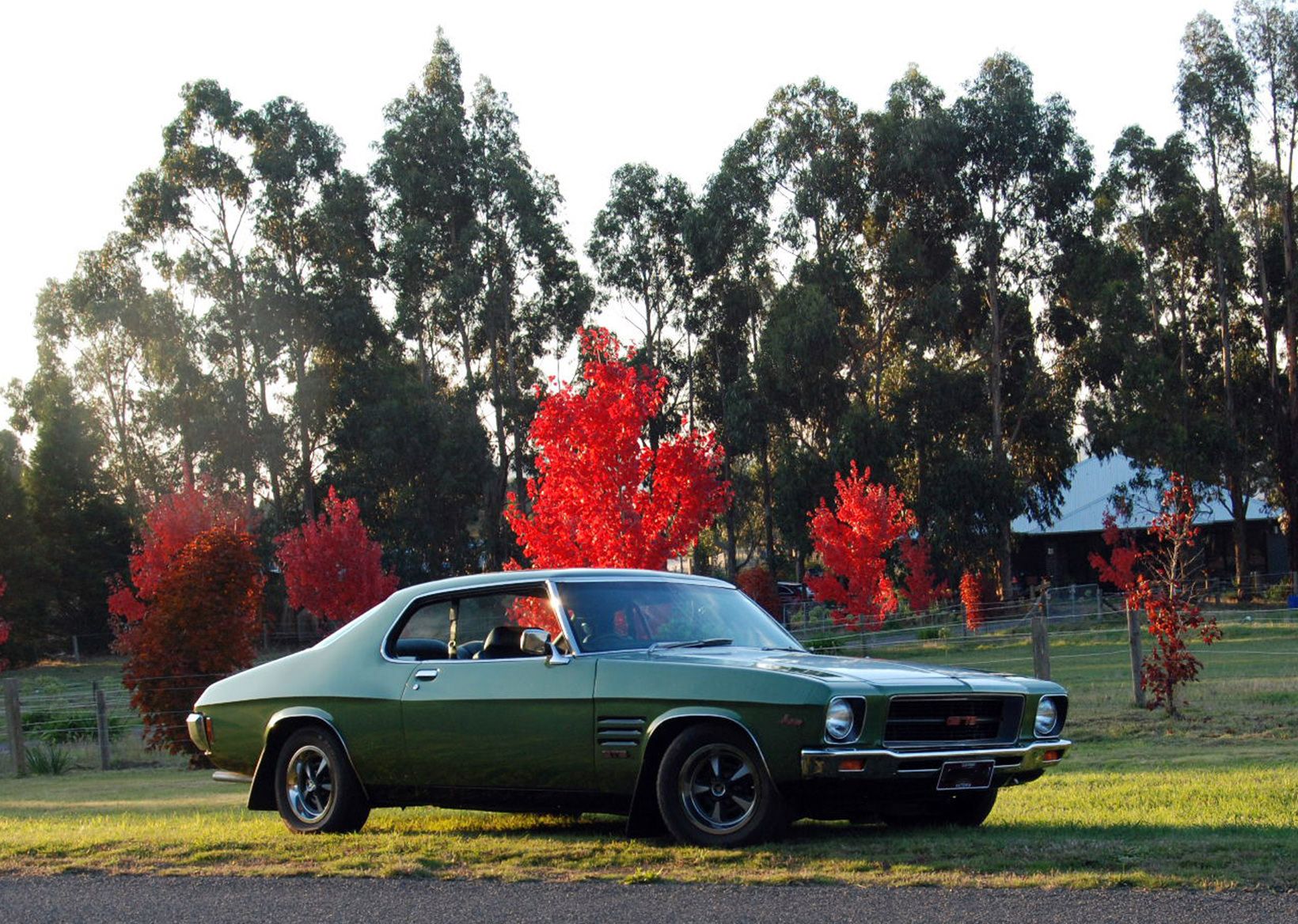 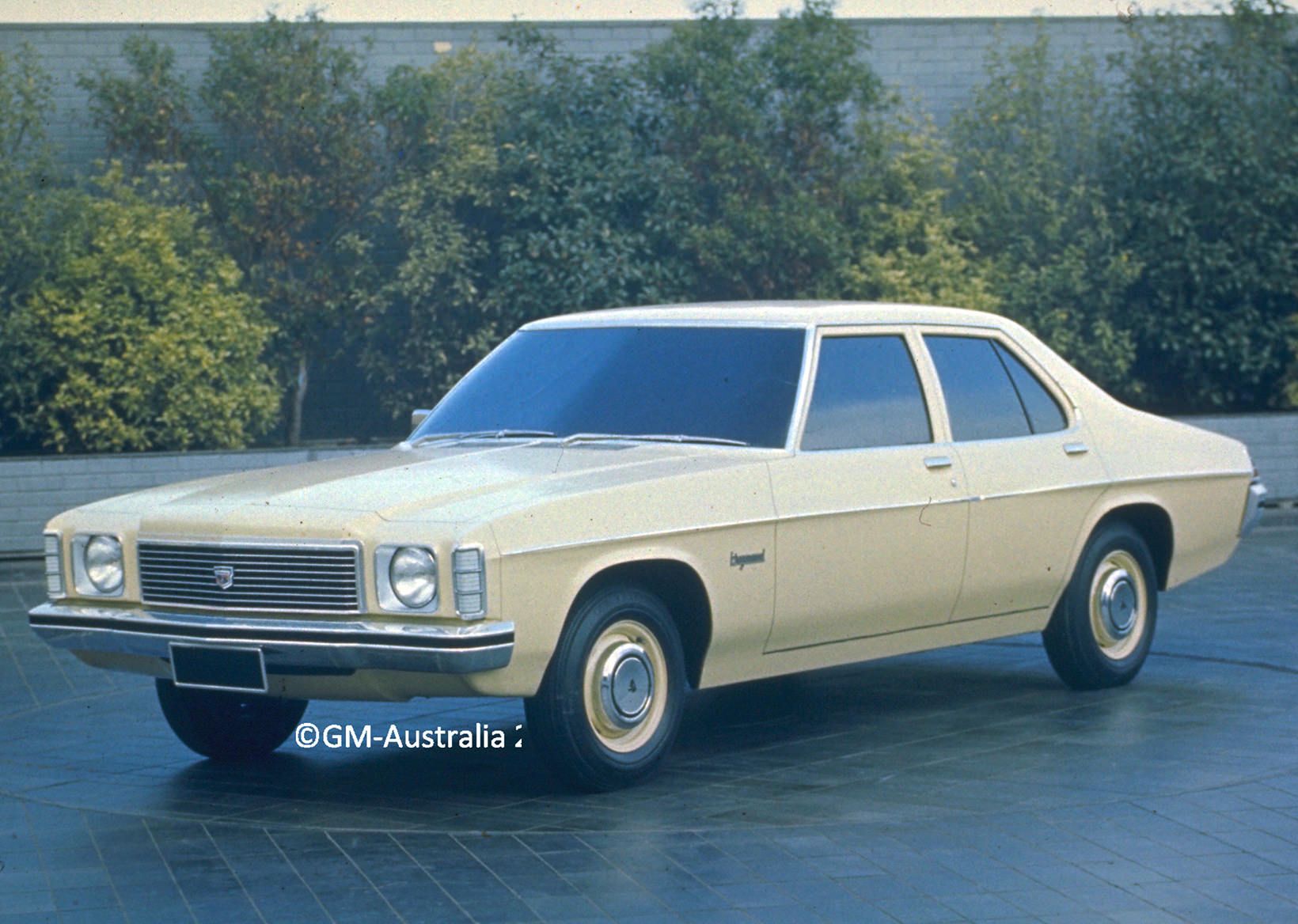 The HQ Monaro coupe. The most elegant automobile ever styled in Australia. This GTS is owned by author and President of Automotive Historians Australia, Dr Norm Darwin. The HJ Kingswood was two years away from production when this photo was taken of the final clay model.

The decisions about the HV were made in 1970 and 1971, when Australia was moving into an era of growing economic, business, political and societal change and uncertainty.

The Vietnam war was still raging, as were the demonstrations against it. After 22 years in office, the federal Liberal government was one year away from being voted out of office. Inflation was close to 7%. Home loan interest rates were creeping towards 10%. Cost pressures were rising for businesses generally, as wages kept pace with inflation. Industrial disputes were at their highest level in Australia’s history.

In the automotive industry, new safety and engine emission regulations were being rolled out by the federal and state governments. Talk of cars being “too big” and inefficient was gathering momentum. 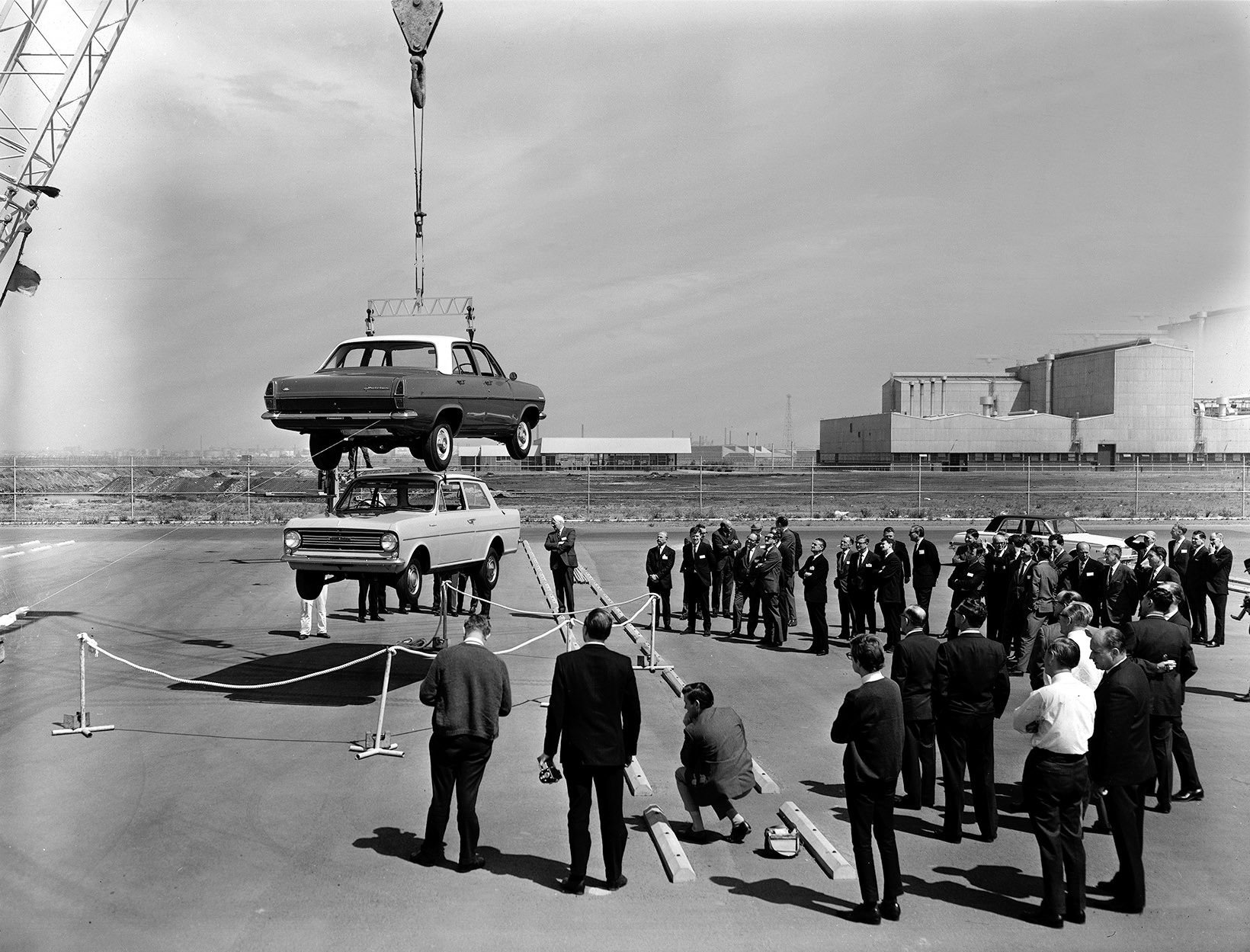 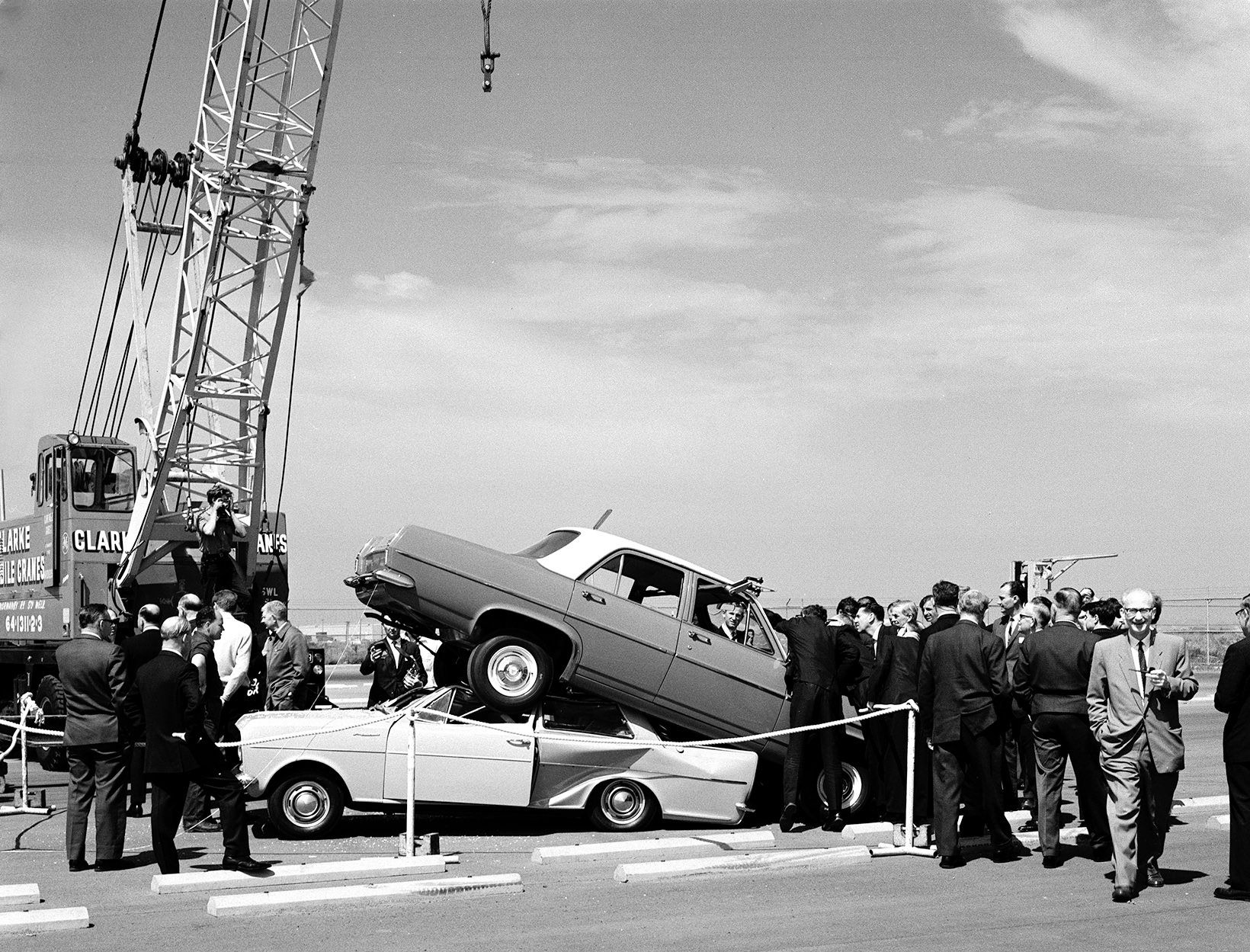 State governments were beginning to mandate seat belts in cars in the late 1960s. Holden’s media event in September 1966 to demonstrate the strength of its seat belts went very wrong. It made the front pages of newspapers across the country.

The Big Four car makers—Holden, Ford, BMC and Chrysler—were under pressure from the growing popularity of value for money imports, such as the Mazda’s 1500/1800 sedan, despite high tariffs and locally assembled Toyotas and Datsuns. 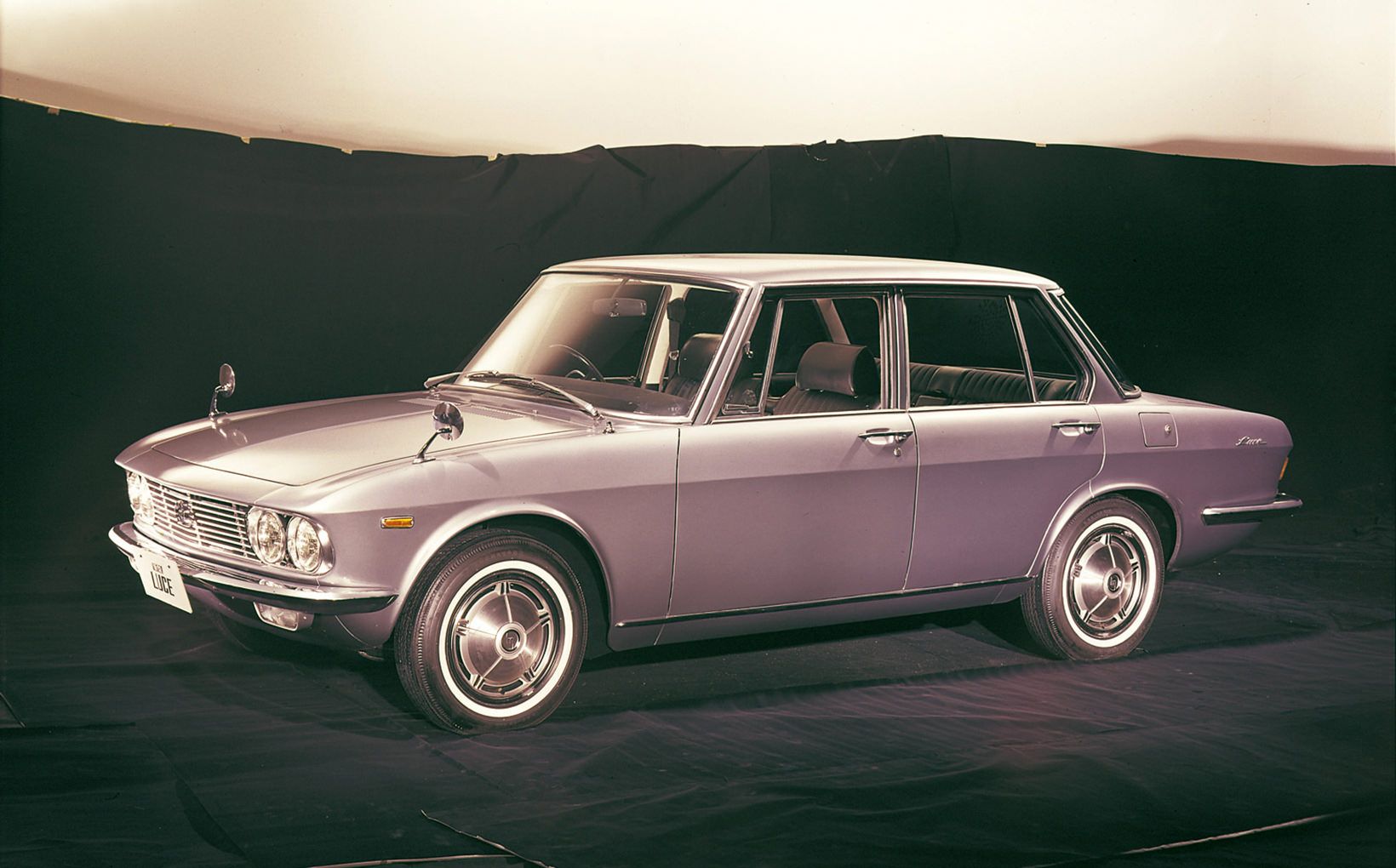 Mazda’s excellent 1500/1800 sedan and wagon set a value for money benchmark that local car makers could not match. 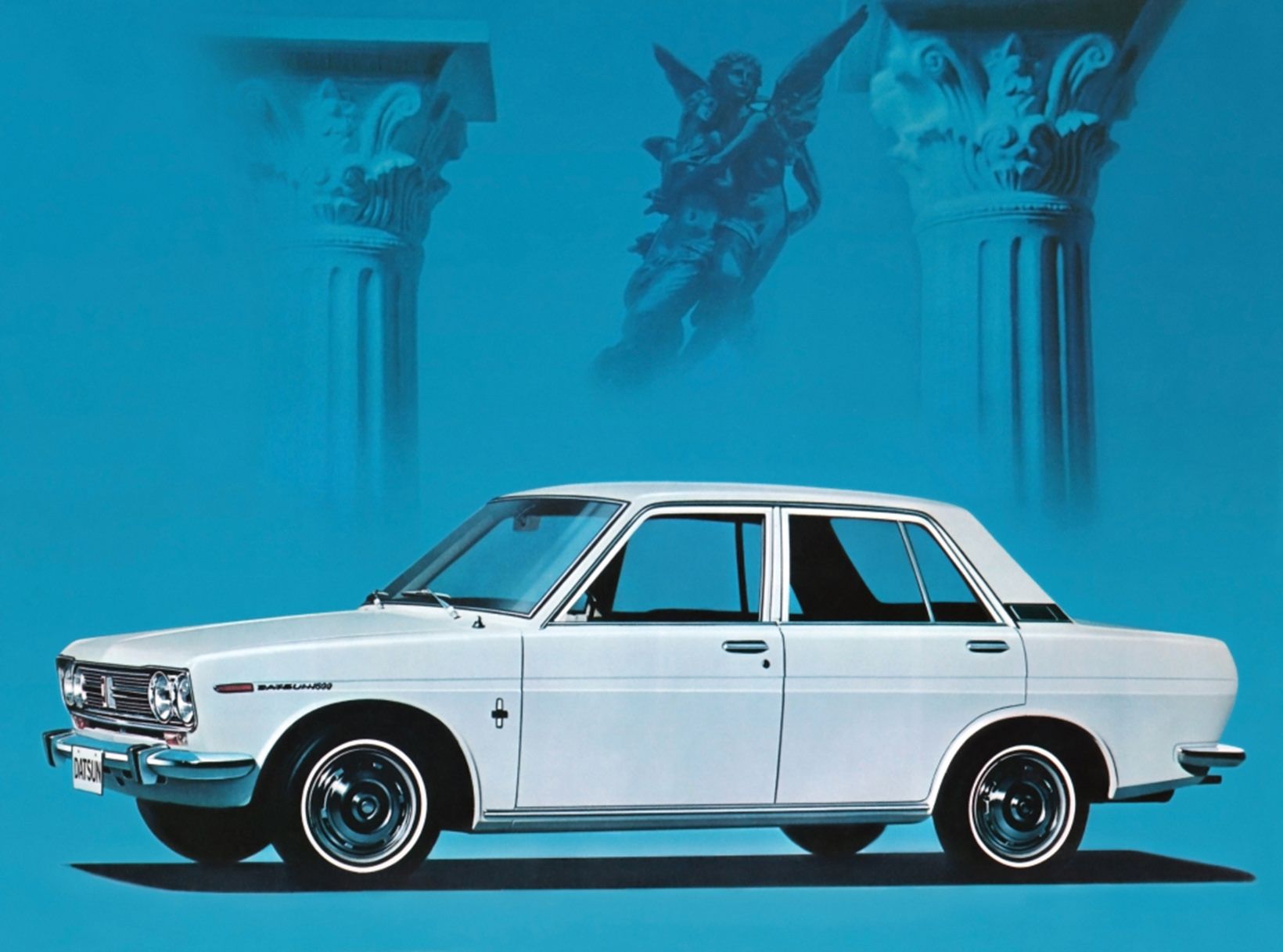 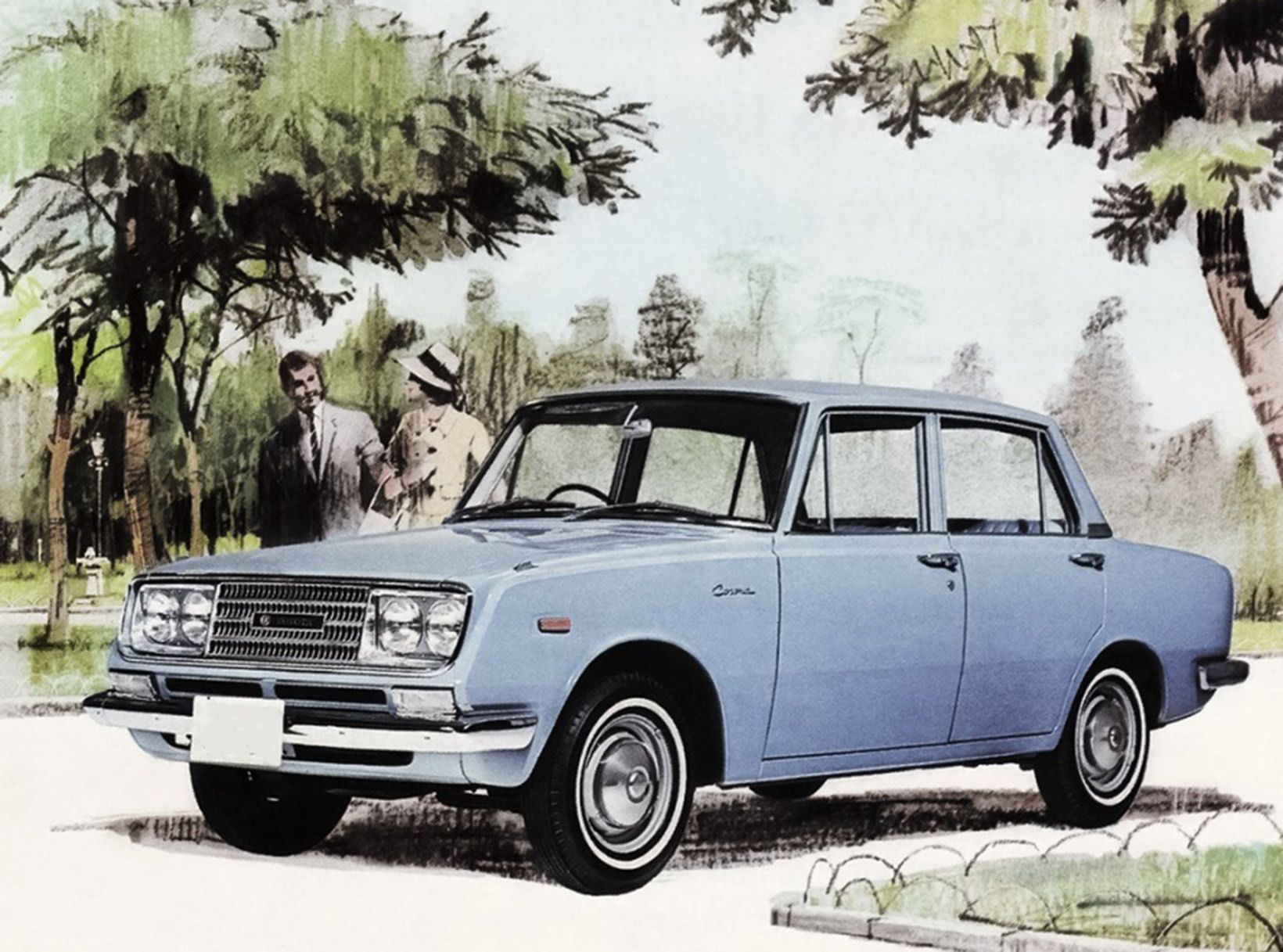 In the late 1960s, buyers were turning to cars like the Datsun 1600 and Toyota Corona, causing Holden’s market share to decline.

Adding to the uncertainty for Holden was something its long serving managers had ignored for far too long: a declining market share and flattening sales. Having enjoyed over 50% of the market in 1958---which many Holden employees could easily recall with pride—the company’s market share had slipped to 33% at the end of 1971. A resurgent Ford was stealing sales with its XW/XY Falcon. Chrysler Australia was selling more cars than ever before, hitting a market share high of just over 12% thanks to the VE/VF Valiant. Nissan and Toyota were building their local presence and well-equipped imports were finding new buyers. 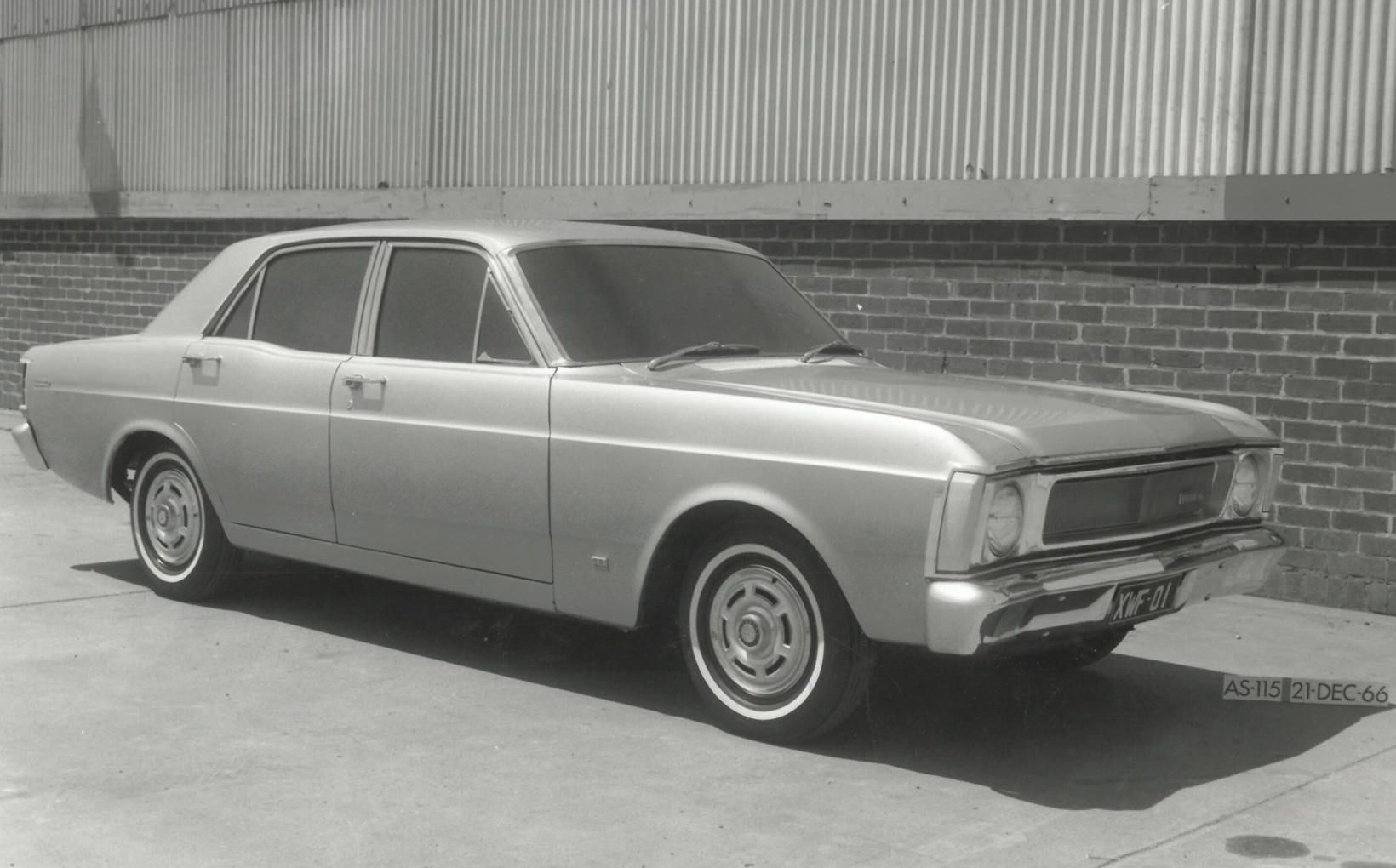 Although the market share decline was important, of much more concern was the sales graph. Between 1963 and 1970, while the overall local market volume had increased by a massive 33%, Holden’s sales had increased by only 6.6%. The company was falling behind year on year. That ought to have set alarm bells ringing loud and clear in Holden’s boardroom, requiring urgent action to rectify. 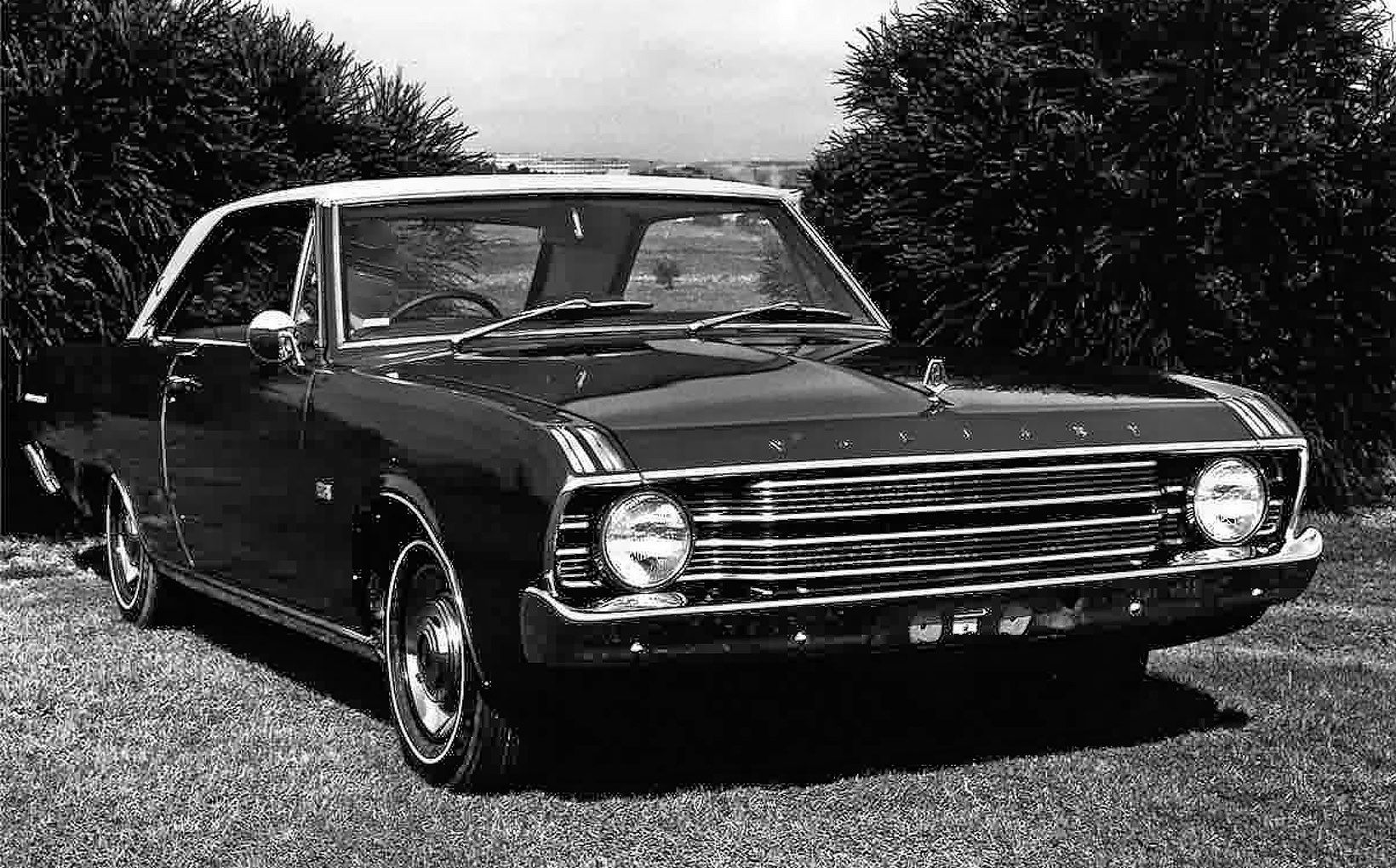 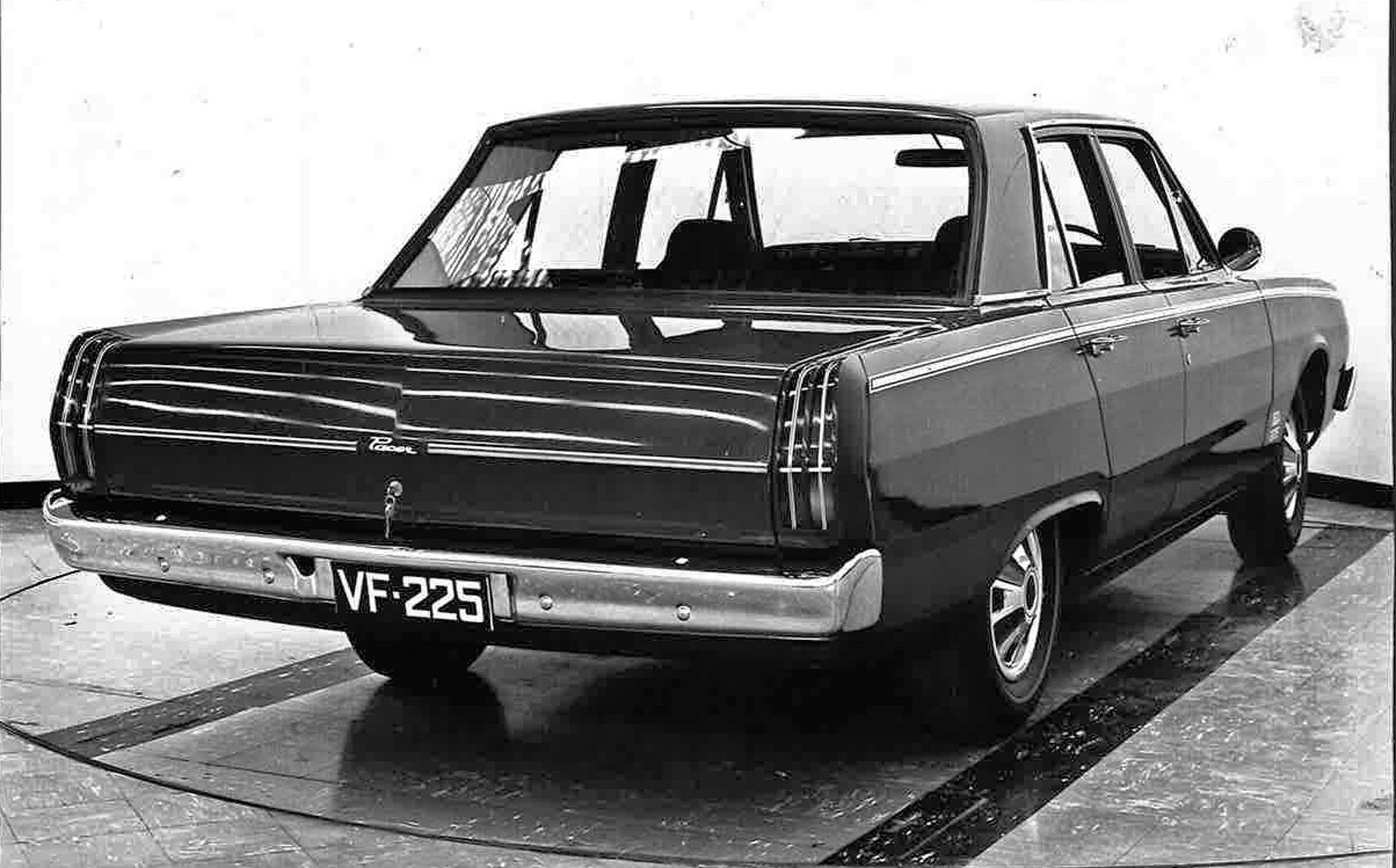 The 1969 VF Valiant was another reason for Holden’s market share decline. The two-door hardtop gave Chrysler buyers a Monaro coupe alternative. The budget priced Pacer 225 sports sedan opened up a new market. Holden did not have anything in its range to counter the Pacer.

Holden’s business model was also under severe pressure. Costs were escalating because of its multiple production facilities and 25,000 employees. Quite simply, Holden was not selling enough cars to justify and pay for all the factories and people. There were also internal issues quietly working their way into the situation which would slow down the decision-making processes right at the time when corporate agility was needed.

At Holden, the mid to late 1960s had been an era when managing director Max Wilson was the cheer leader in chief. He valued decisiveness and action. Sales were won by stylish cars. The Monaro coupe, Hurricane concept car and six-cylinder LC Torana are examples of his product led thinking. 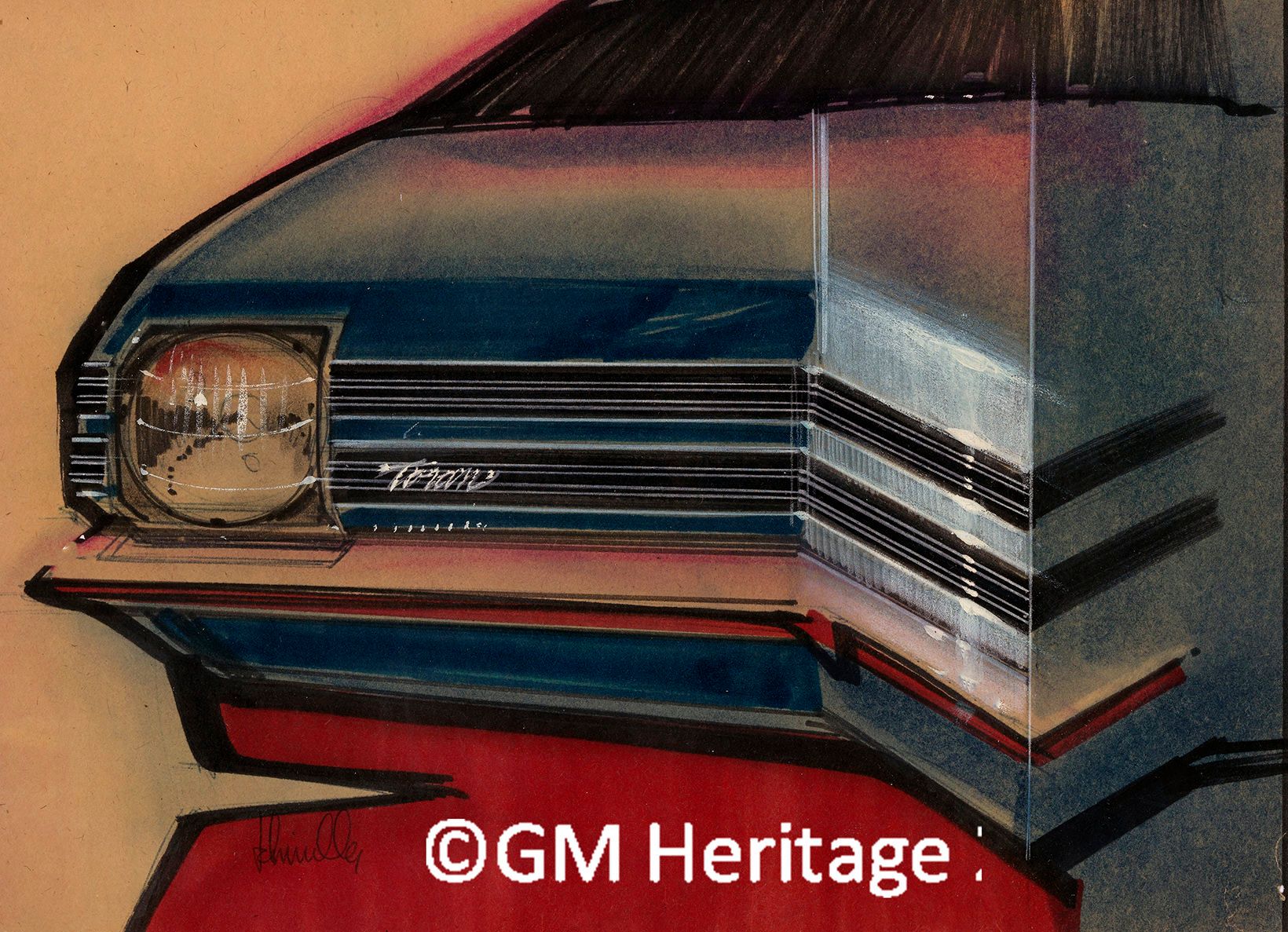 John Schinella’s first sketch for the six cylinder LC Torana. The LC was approved by Holden’s then boss, Max Wilson, based on his intuition and calculated risk taking. It paid off big time.

However, as the 1970s began, those who followed him in the managing director’s job had different, risk averse views. Dr John Wright sums it up in his great book Heart of the Lion.

“At GMH, bureaucratic caution was undermining future prospects by denying the possibility of creative boldness; a stultifying era had settled in at Fishermans Bend.”

It is within this context that work began on the HV in mid-1970. 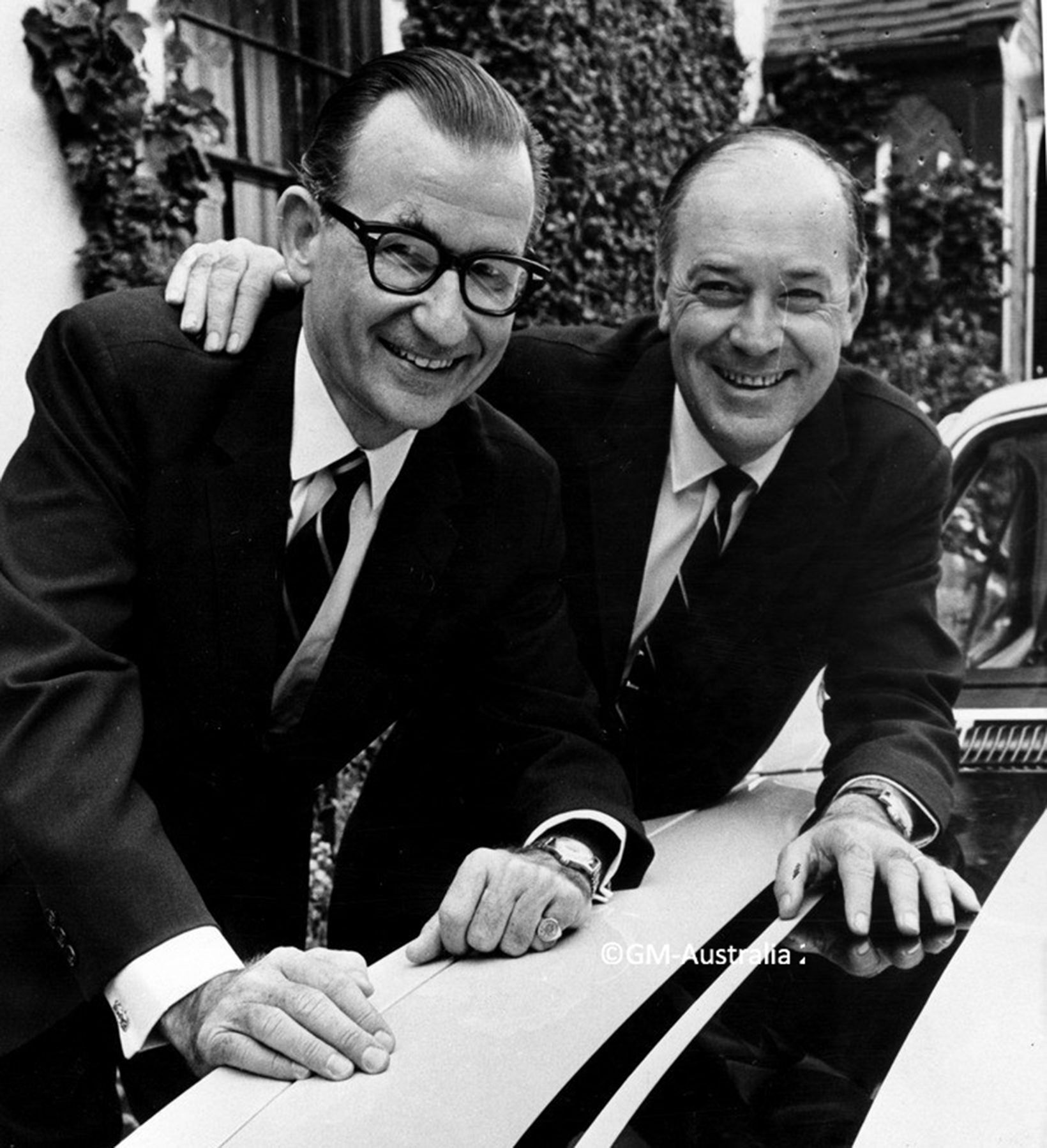 Max Wilson (right) with his successor, Alex Rhea, circa mid-1968. From Holden, Rhea was sent to Vauxhall. Here’s a link to the Vauxpedia, where the website’s founder David Booker expresses his opinion about Mr. Rhea. Scroll through to the Rhea interview and then read the next one, where Rhea’s replacement, Bob Price, reveals what he had to fix when he took over.

Those involved in the HV’s styling included Leo Pruneau, assistant design director, and Peter Nankervis, chief designer of the Holden studio. Joe Schemansky was the design director. In my Design to Driveway book series Peter recalled the HV program.

“We started work on it in 1970, long before the HQ was released. (The late) Chris Emmerson and I did many sketches. We were exploring ideas. These were an evolution of the HQ’s smooth soft styling.” 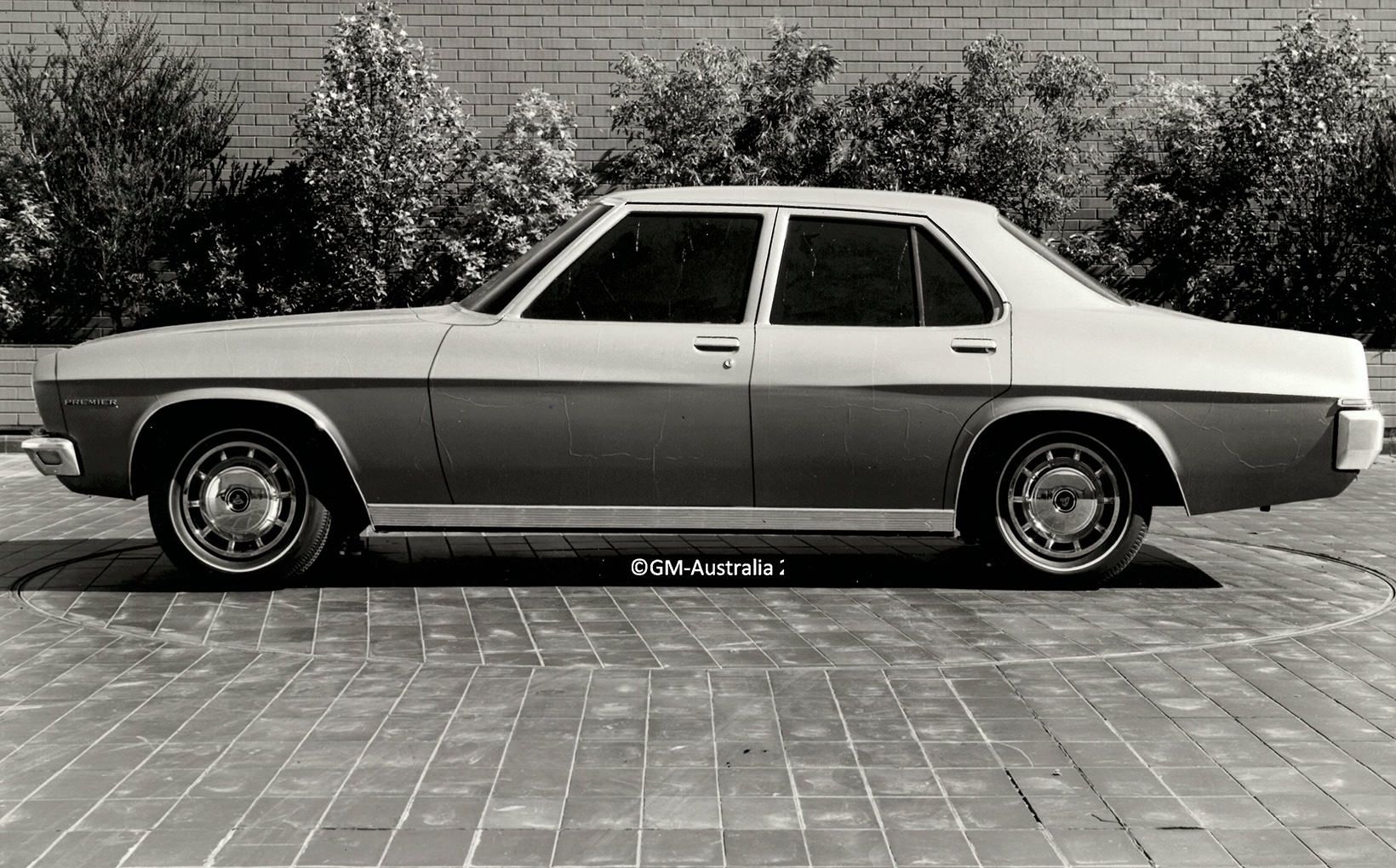 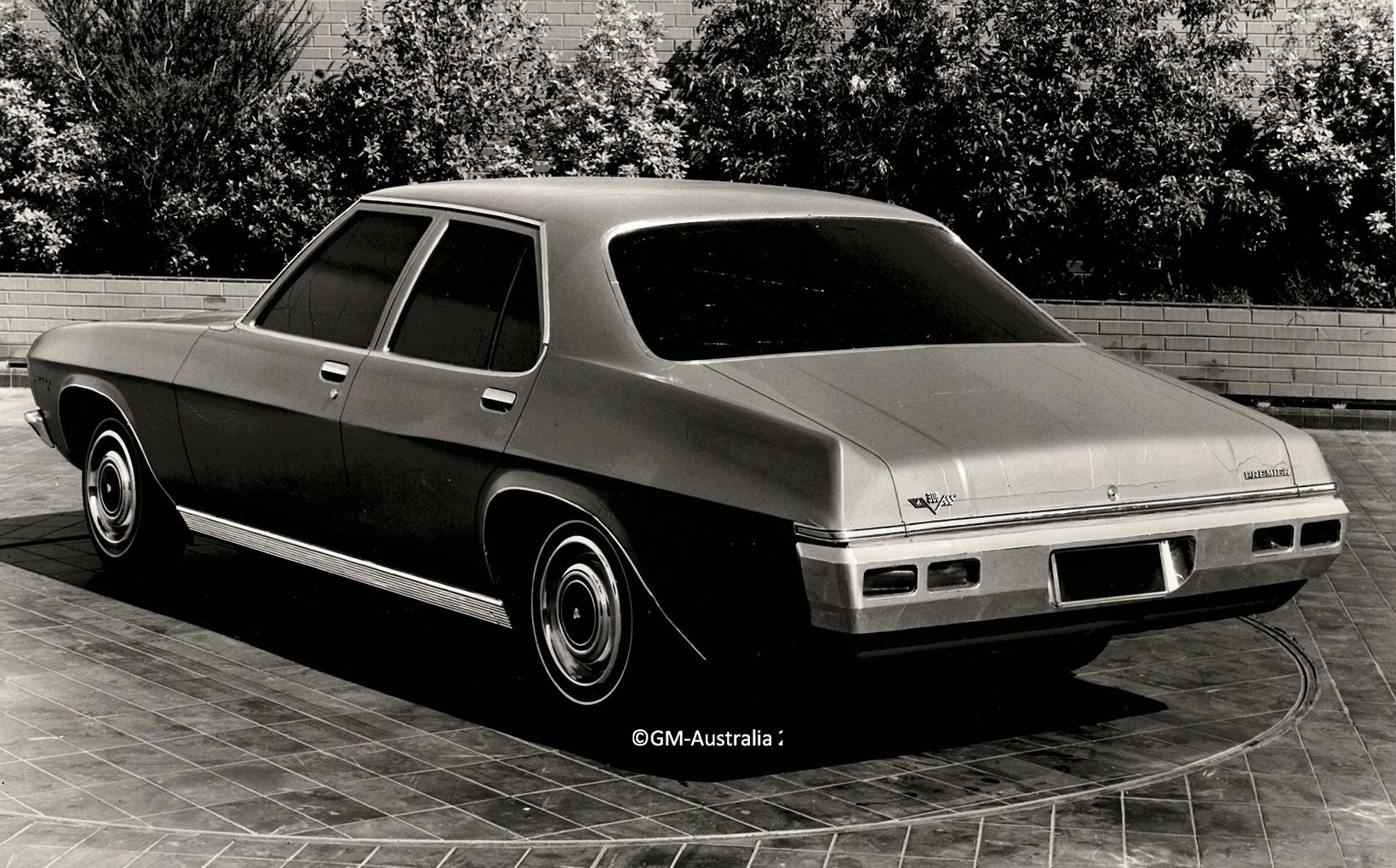 This side view photo shows what the HV Premier might have looked like, with a higher rear fender and boot lid. The rear ¾ photo reveals that the stylists simply applied some extra clay to gain the side view profile, without having to re-form the entire rear end of the clay model. This short cut saved days of work.

Peter says that they were moving towards an amalgamation of European and American themes for the HV. In addition, Leo wanted to visually lift the rear end of the HQ, which he thought looked a little droopy. A number of full-sized clay models were constructed to evaluate the styling ideas, as Peter notes:

“These were ‘what if’ models just to see what things looked like in three dimensions. We did all this very quickly so some of the ideas were never really worked out to any fine degree, and remember, the HQ was not actually on the market at this point.” 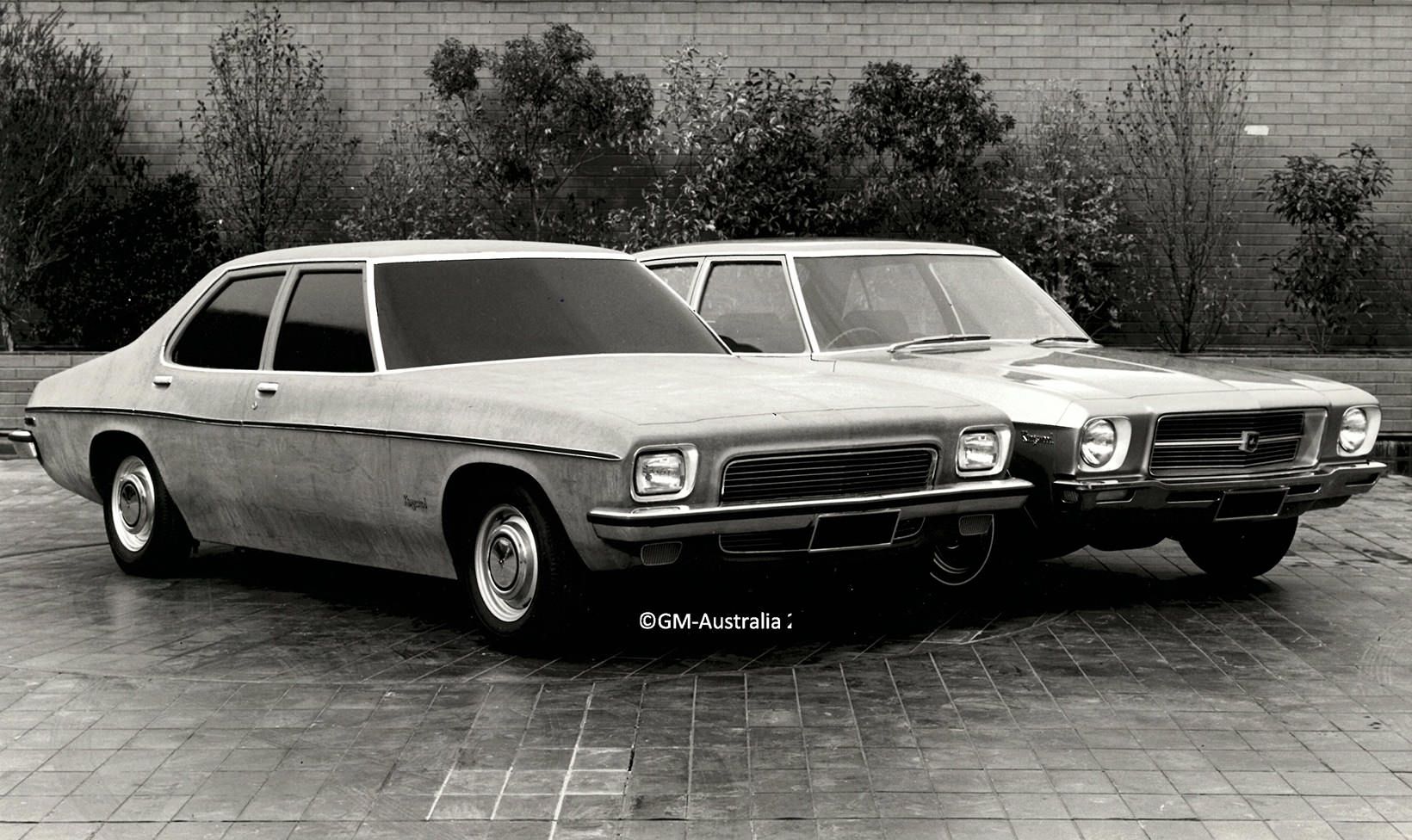 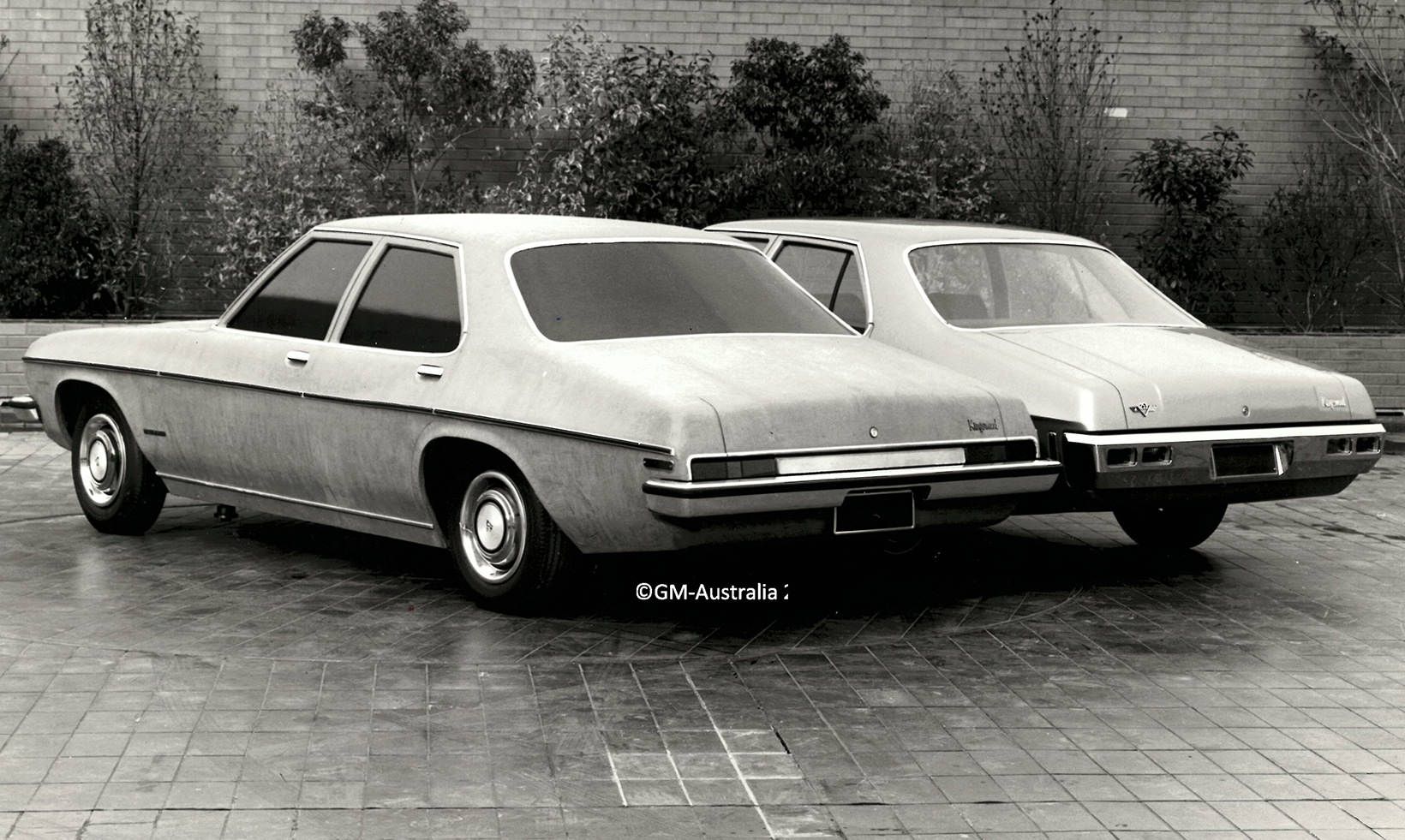 The first HV proposal, in clay, being compared to the fibreglass model of the HQ, circa April 1971. The revised front of the car features rectangular headlights, in keeping with a more European theme. Locating the tail lights under the boot lid and reducing the thickness of the bumper bar visually lifts the rear end without any sheet metal changes.

While Peter and Leo were focused on shaping the HV, other issues were capturing the thoughts of Holden’s top management team. Pre-release market research clinics, comparing the HQ with the XY Falcon and VG Valiant, suggested that its appearance was too “soft” and that it looked smaller than its harder-edged competition. This research was supported by some anecdotal feedback when the HQ first appeared in showrooms. Ironically, the HQ was actually longer than the XY Falcon. It is just that it did not look longer, and that was intentional. 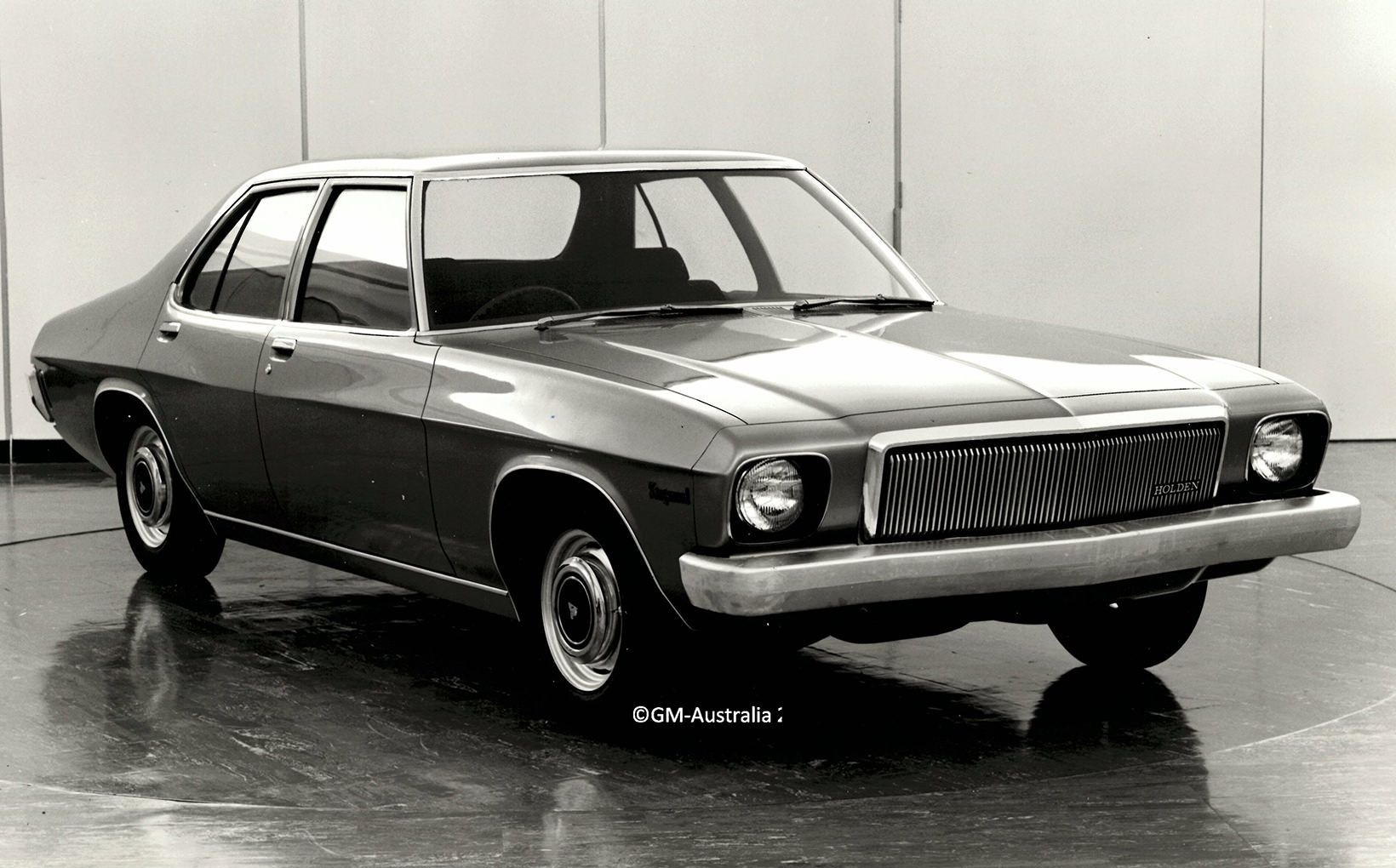 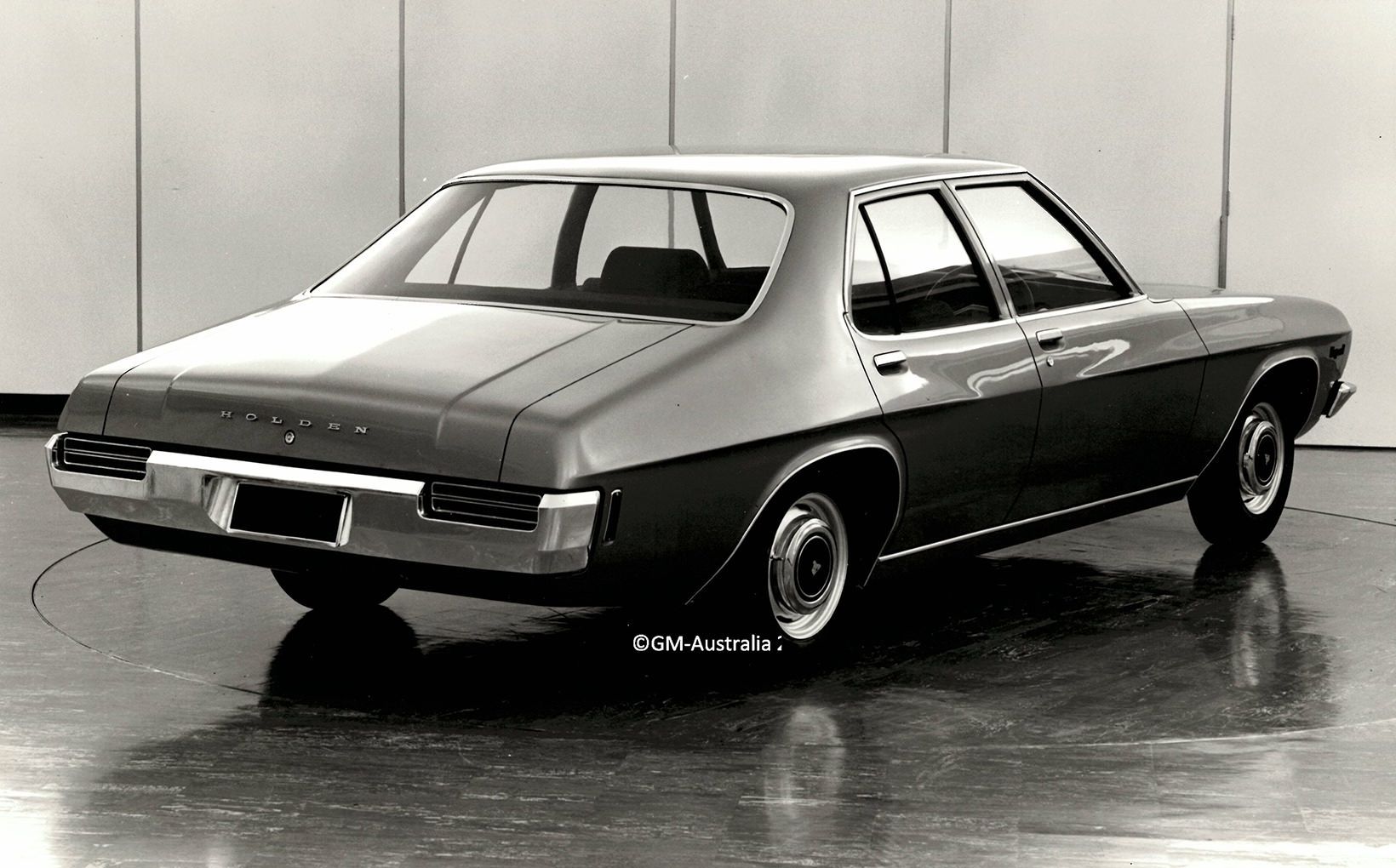 Not the most elegant of grilles, but the rear end is neat. These and other proposals were not meant to be styling beauties. Rather, they were developed quickly to evaluate design themes. This proposal uses a pre-production HQ sedan as the base for the changes.

Because of the research results, Holden’s senior executives became uneasy about the styling direction of the HV. Should it be changed to something more angular, more American? The discussion went on for months and months with no decision being made. The delay made it hard for Peter, Leo and styling team to lock in a final shape and the mid-1973 release date was abandoned. 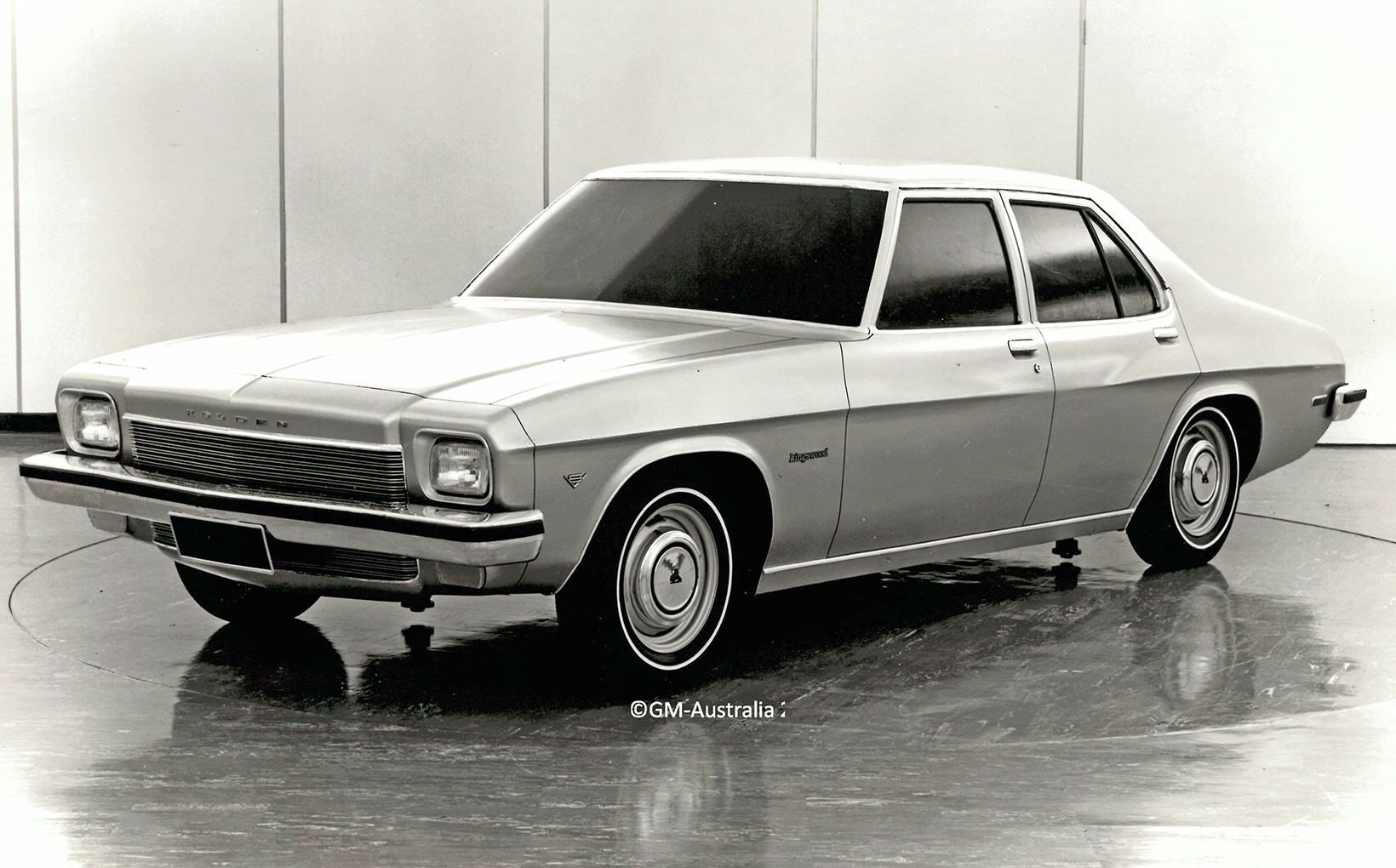 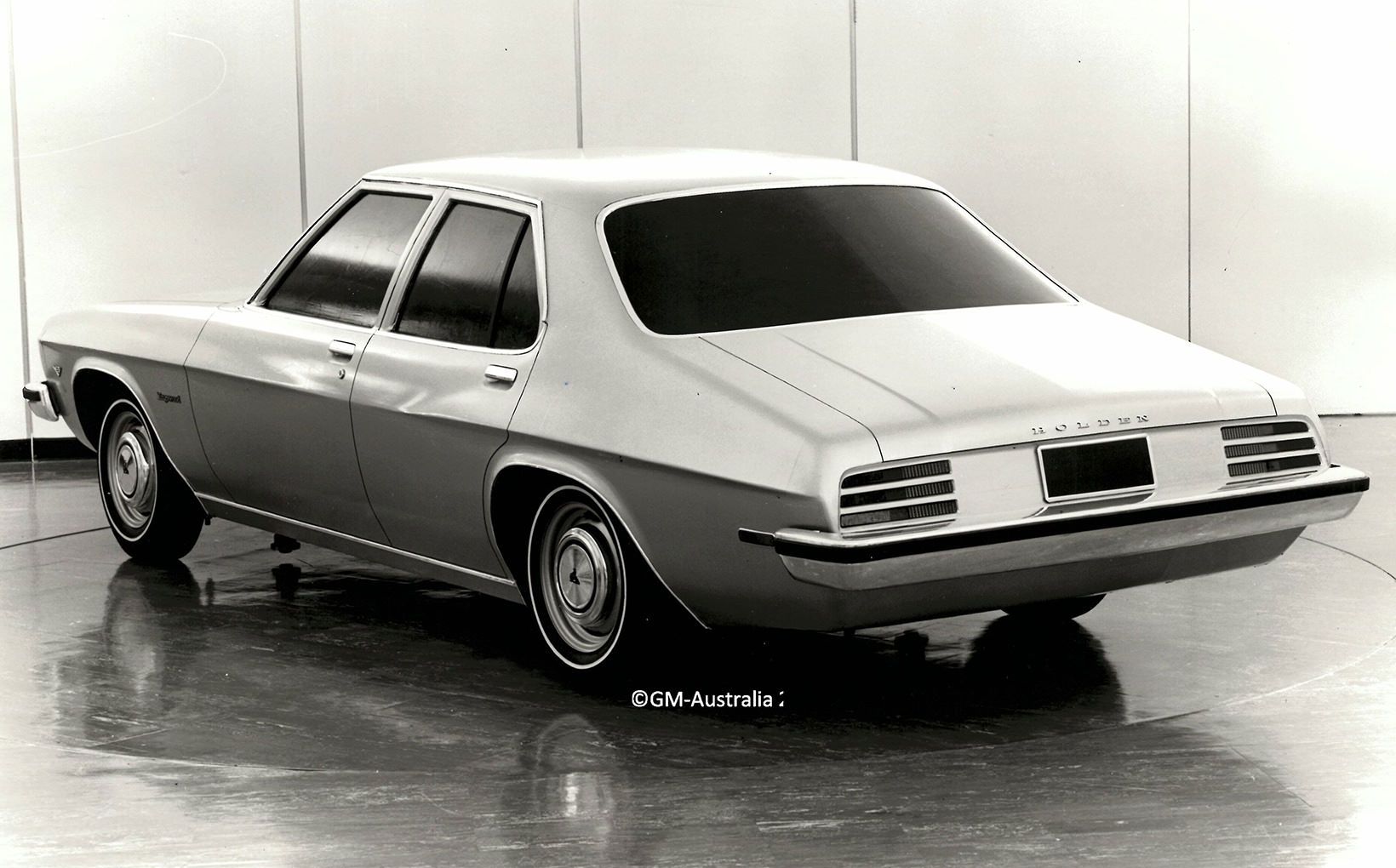 The front end styling theme of this proposal was transferred to the LH/LX Torana project. Holden owners would have not appreciated the high boot lid lip when loading luggage if this had made it into production.

In late 1971, Holden’s top managers finally made up their minds. They cancelled the HV. A new program was instigated, coded HJ, incorporating a more angular Chevrolet-based styling theme. The release date was pushed into 1974. That’s why we never saw the HV.

In April 1972, A.G. Gibbs, Holden’s managing director, wrote a report to GM’s group vice president Elliot “Pete” Estes, confirming the HJ program. Accompanying the report was a time chart showing that the HJ would be launched in July 1974 and the WA in January 1978. That was the plan. 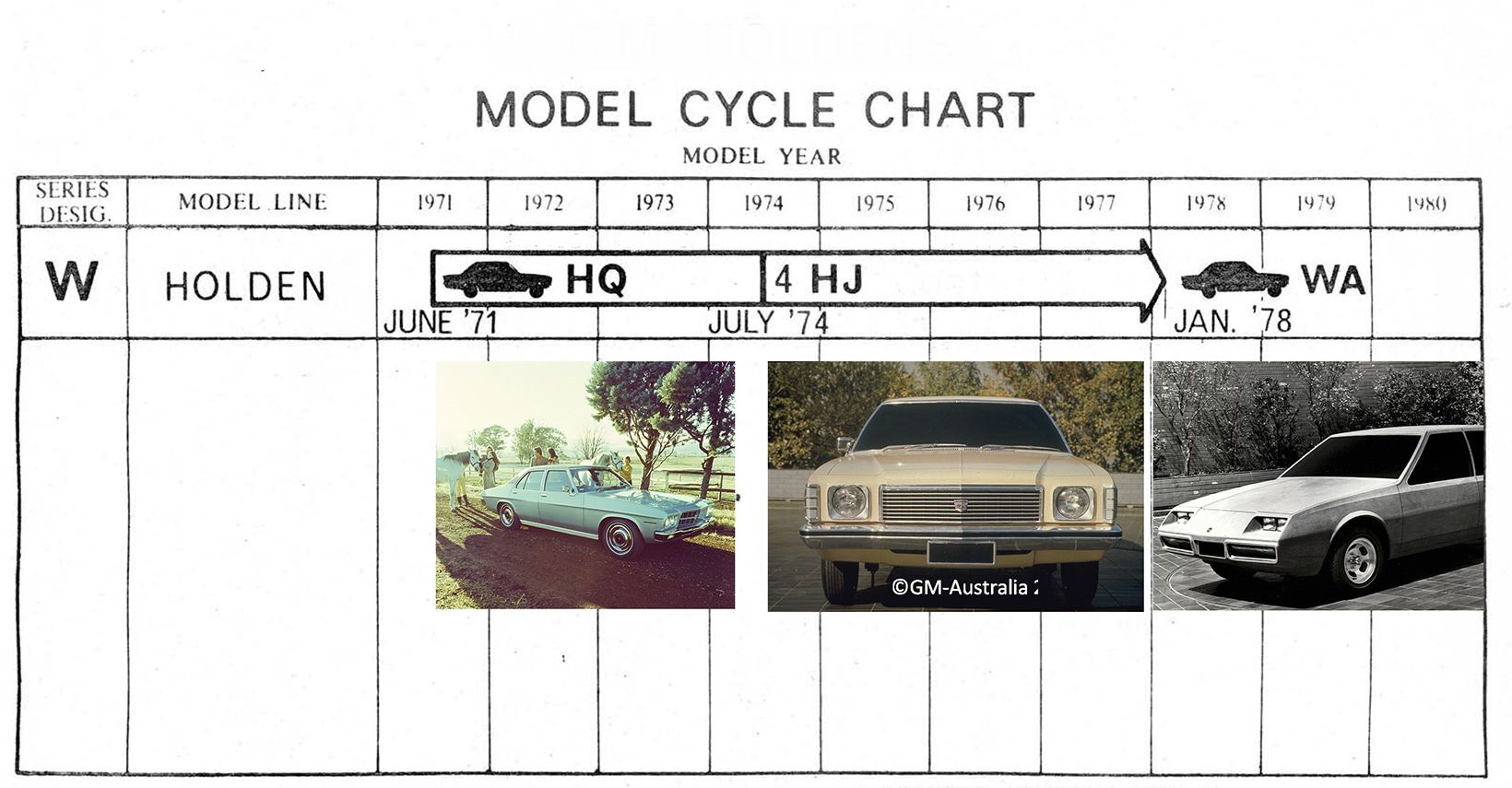 This chart shows the planned model timings for the HQ, HJ and never released WA. Note that Holden expects the HJ to remain in production for 3.5 years, longer than the HQ’s tenure.

What is the HV’s legacy? 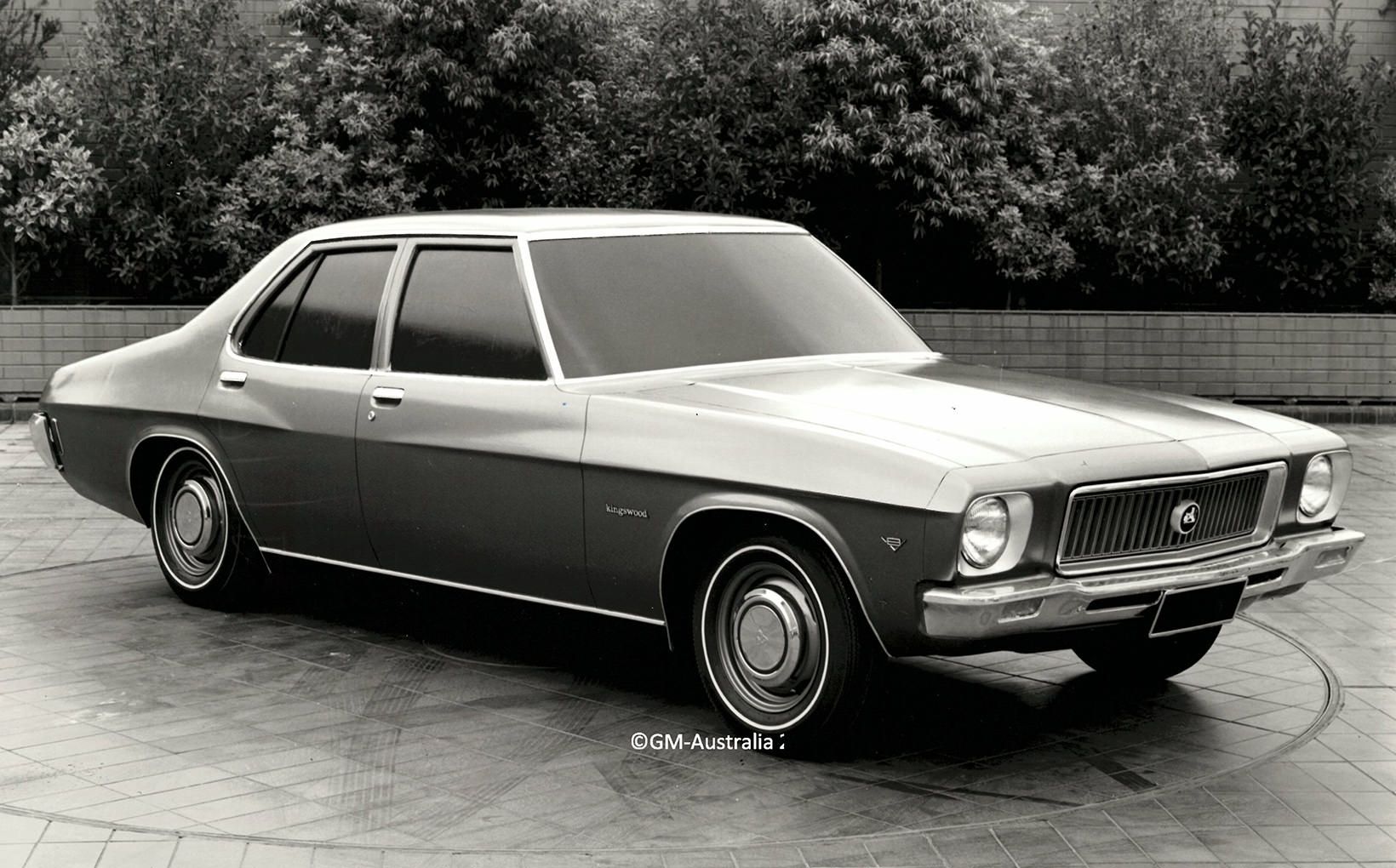 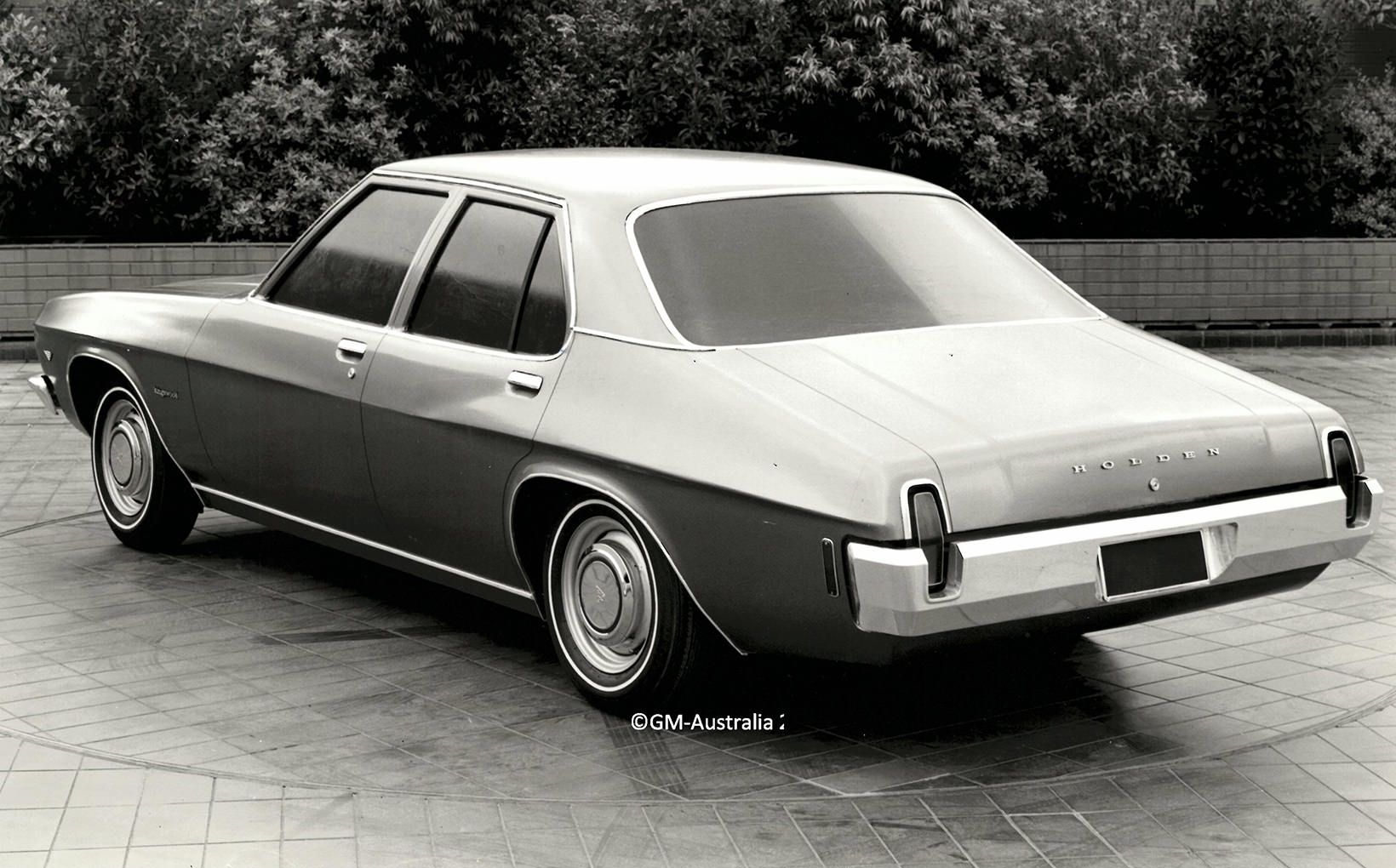 While retaining a HQ like front end, this proposal features the vertical tail lights from the HQ wagon and Statesman.

The final version of the HV, seen below, is a great looking car. It combines the American angularity and European elegance that the designers were striving for. Why Holden’s top managers wanted even more angularity in the design is one of those enduring mysteries, especially as later research showed buyers liked the HQ’s svelte lines. 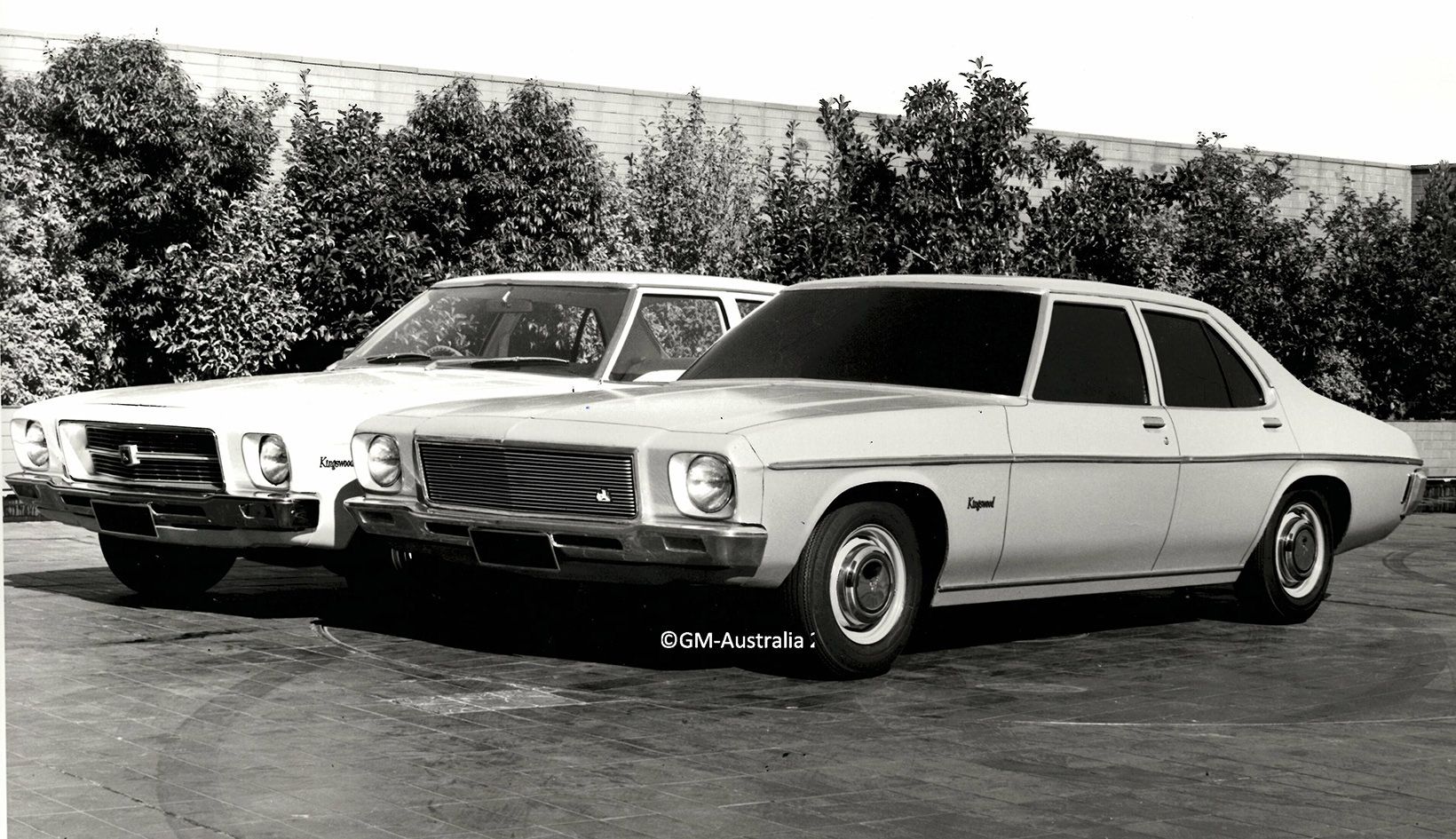 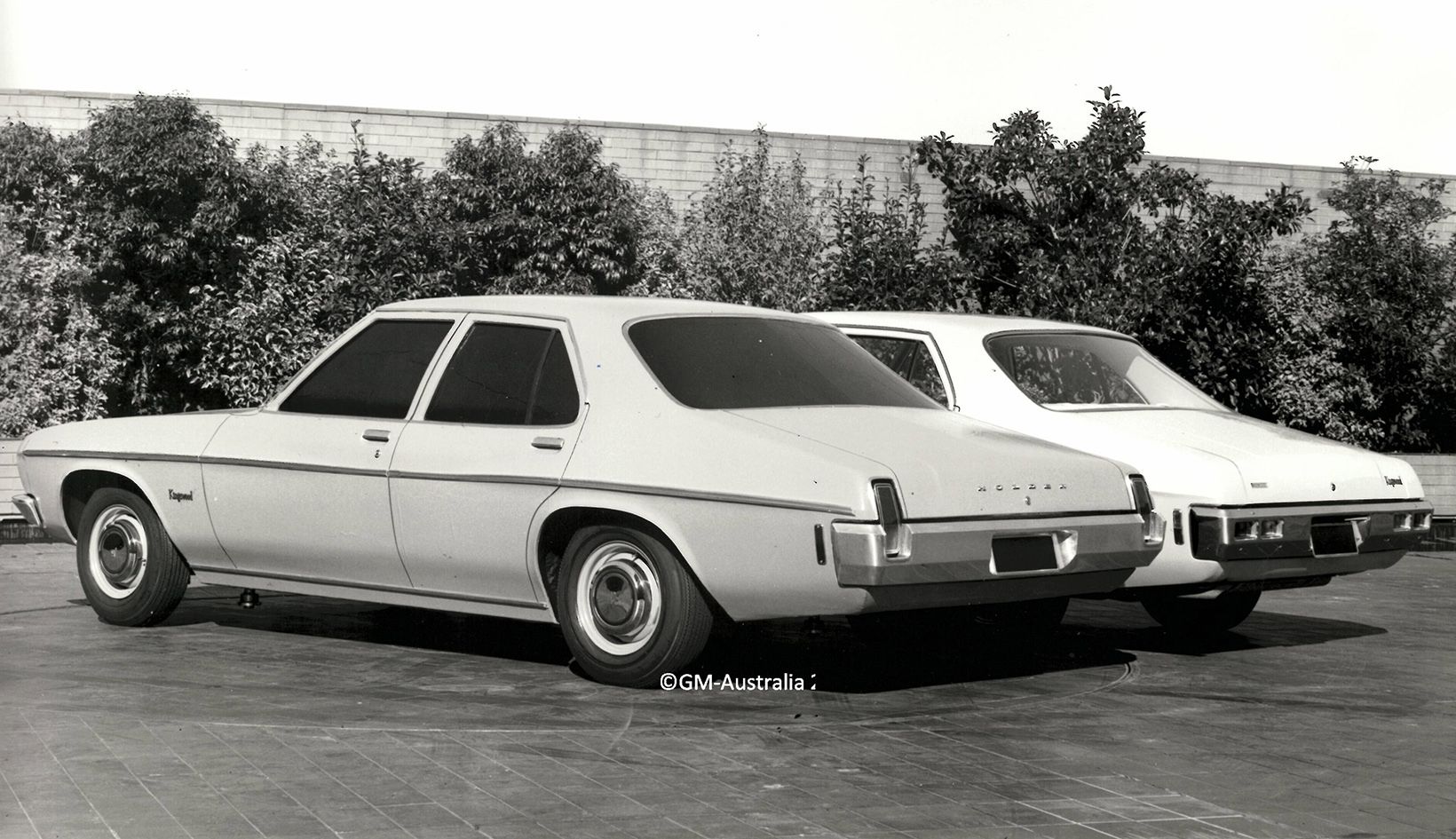 These photos show the HV in as close to final form as you will ever see. The comparison with the HQ demonstrates how the vertical tail lights visually lift the rear end of the car while retaining the HQ’s fenders. A simple change to the grille also makes a considerable visual difference. The HV looks more angular than the HQ. It is hard to understand why Holden’s senior managers thought this car was “too soft” in its appearance and, because of that, cancelled the project.

Does the HV have a legacy? I do not believe it does. For me, though, what the HV does highlight, is the growing indecisiveness within Holden’s top management ranks at a time when intelligent risk taking and decisiveness was needed. This would have significant strategic ramifications as the 1970s unfolded and the decisions regarding the HJ, WA and WB programs.

Watch out for the HJ, WA and WB design to driveway stories, coming soon in Retroautos.

Retroautos is written and published with passion and with pride by David Burrell. Retroautos stories and images are copyrighted. Reproducing them in any format is prohibited. Retroautos is a registered trademark.