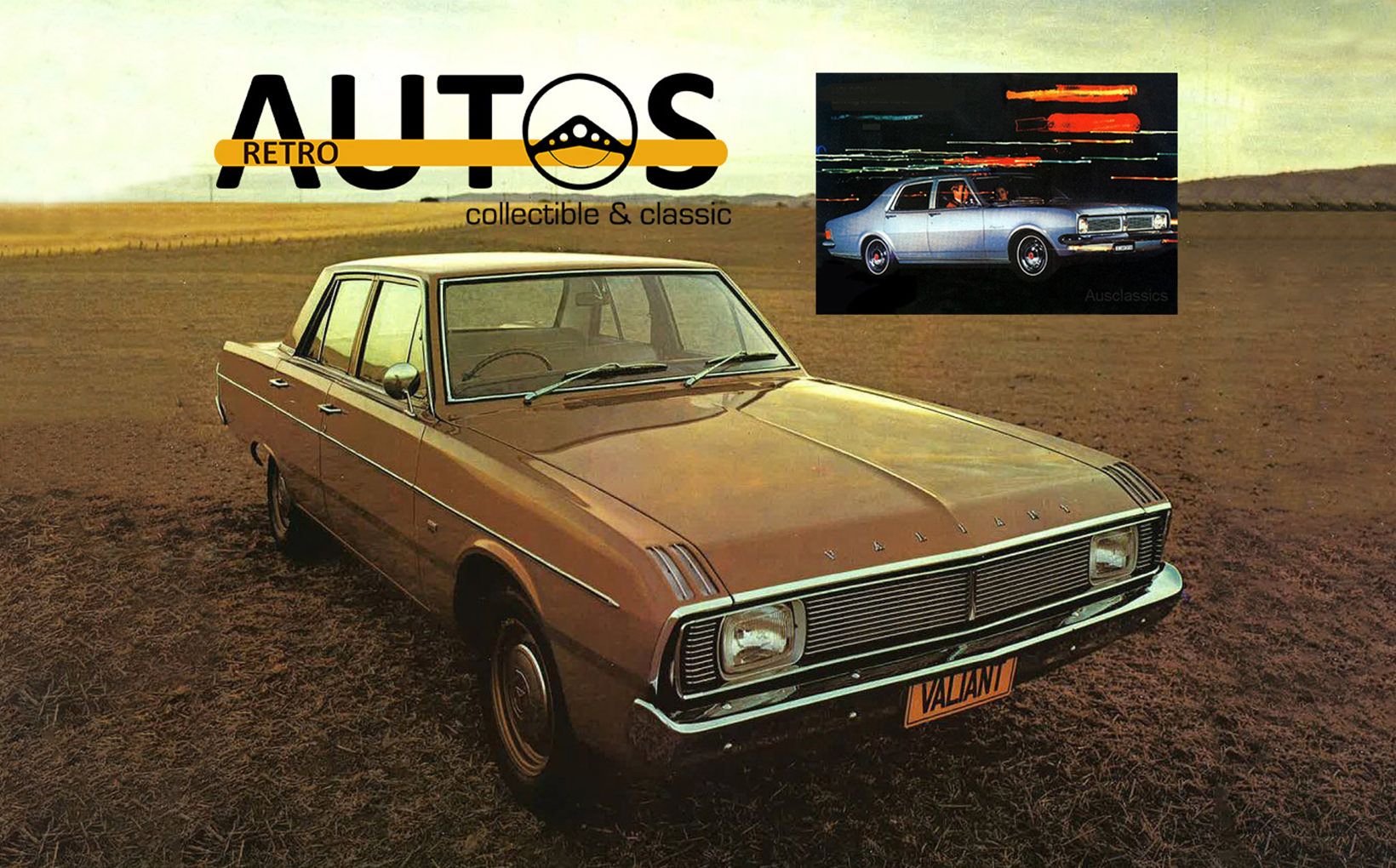 No Change for the Kingswood but a “hemi” for the Valiant.

Can you believe it? The HG Holden and VG Valiant both hit 50 earlier this year.

What, you did not notice? Well, don’t feel bad about it. You were not alone.

But here at Shannons Club and Retroautos we always enjoy celebrating an anniversary, even if it is a little late and for two of Australia’s most overlooked classic cars.

Just in case you forgot, the VG appeared in March and the HG in July of 1970.

Along with Ford’s XW Falcon, (see Retroautos October 2020 for its design to driveway history: LINK) the VG and HG comprised Australia’s most popular market segment: the affordable, economical and roomy family vehicle, with “go-anywhere” robustness. 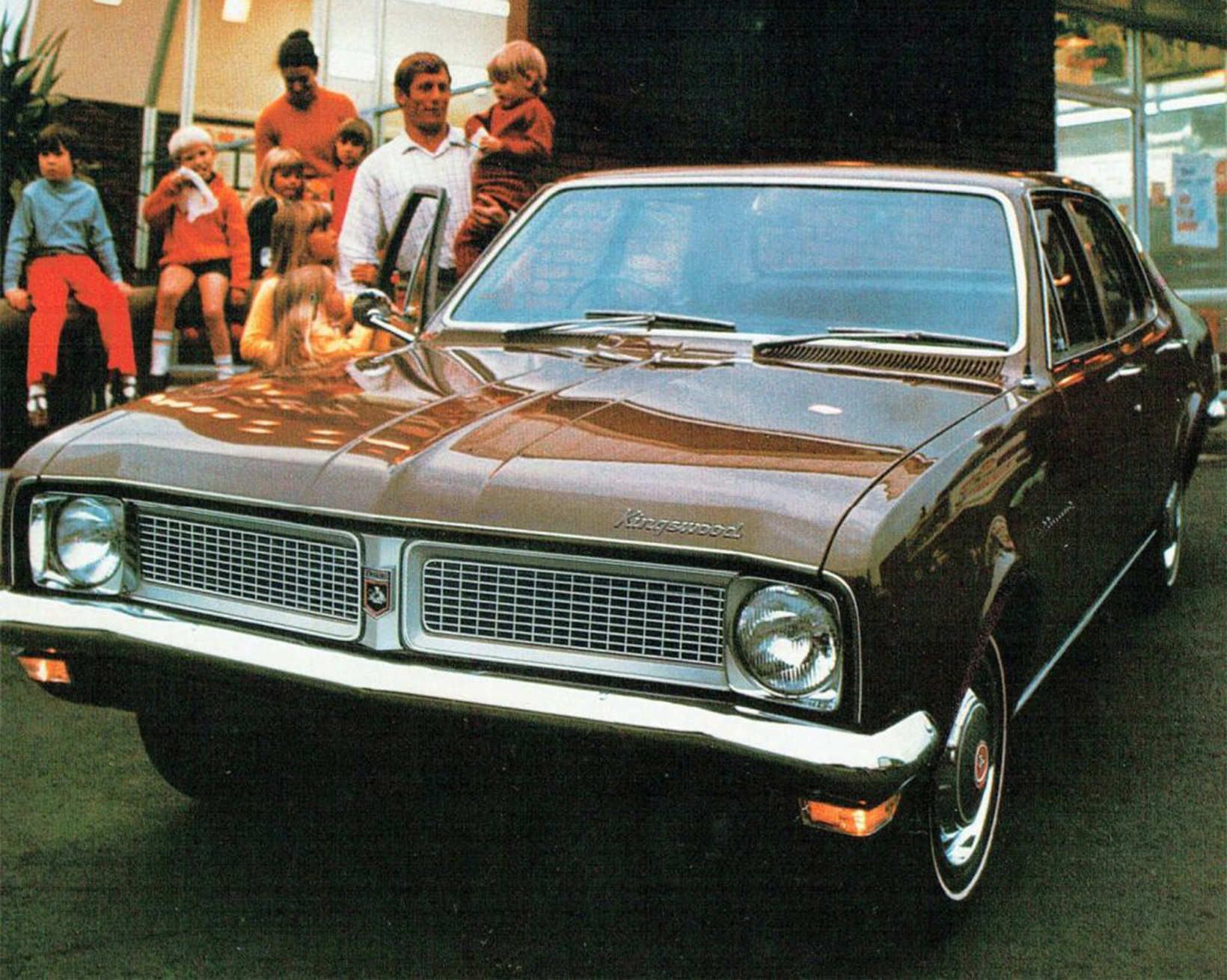 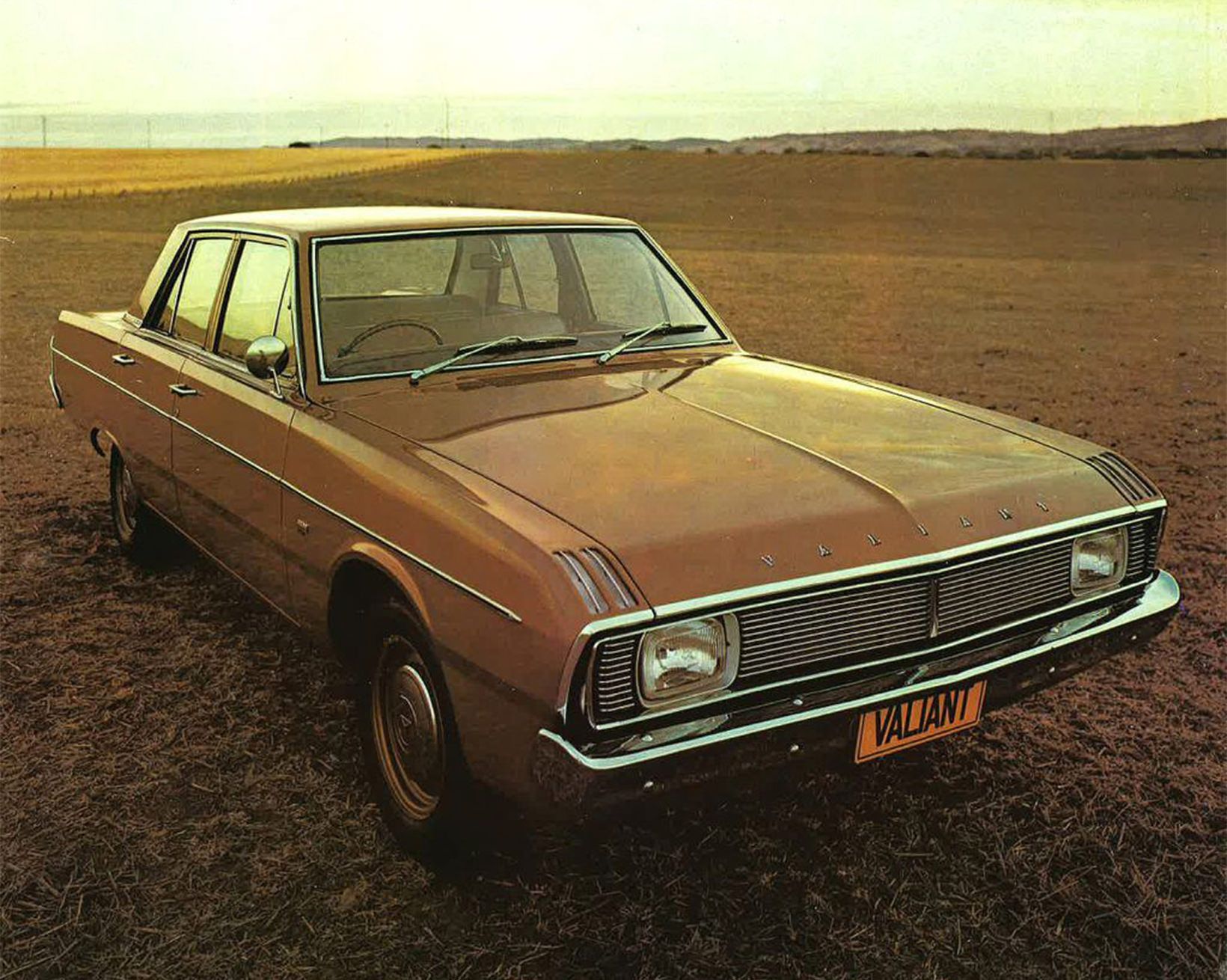 Holden promoted the HG’s ability to accommodate growing families, while Chrysler, unwittingly, emphasised that it was all alone in the vulnerable number three position in the market.

The Australian car scene was a very different in 1970. The market was dominated by the “Big Three”. Holden had 33% of the market, Ford was gaining momentum and enjoyed a 21% share. Chrysler Australia, always in third place, had slipped to around 12% after reaching an all-time high of 14% in 1969.

But trouble was on the horizon. Those pesky imports were slowly eating into the Big Three’s sales. The General Motors-Holden 1970 annual report noted the “increasingly keen competition during the year from fully imported and overseas sourced vehicles.”

But for now, life was good for the Big Three.

In many ways the HG and VG were automotive placeholders which gave their respective companies 12 months to finalise the development of all-new cars for release in mid-1971.

Both cars could trace their design history—engineering and styling—back to the mid-sixties.

From a styling perspective the HG was a carbon copy of the 1969 HT, which itself was a re-fresh of the 1968 HK.

The HK’s shape had been finalised in late 1965, with the HT/HG sheet metal being approved a couple of months later. 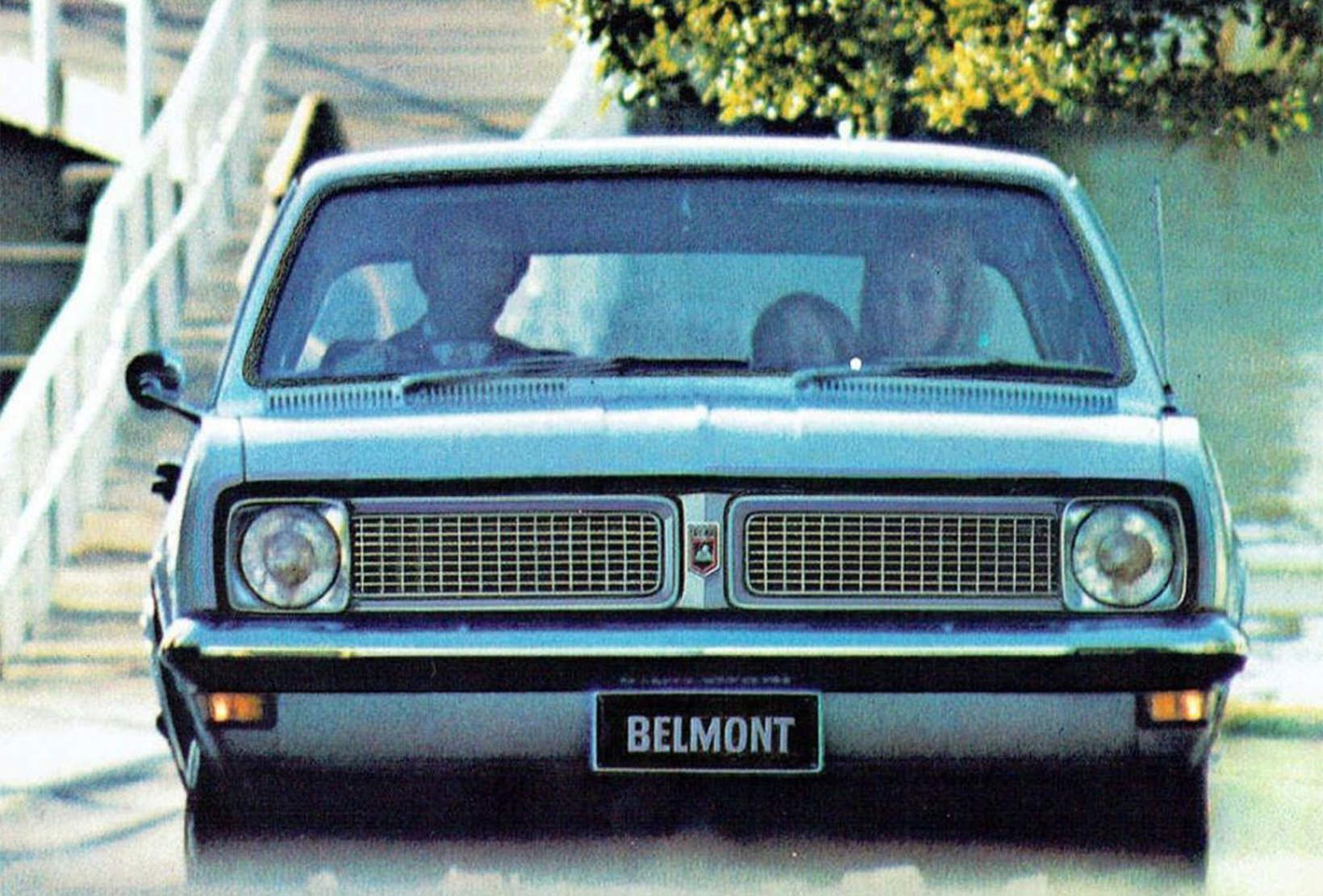 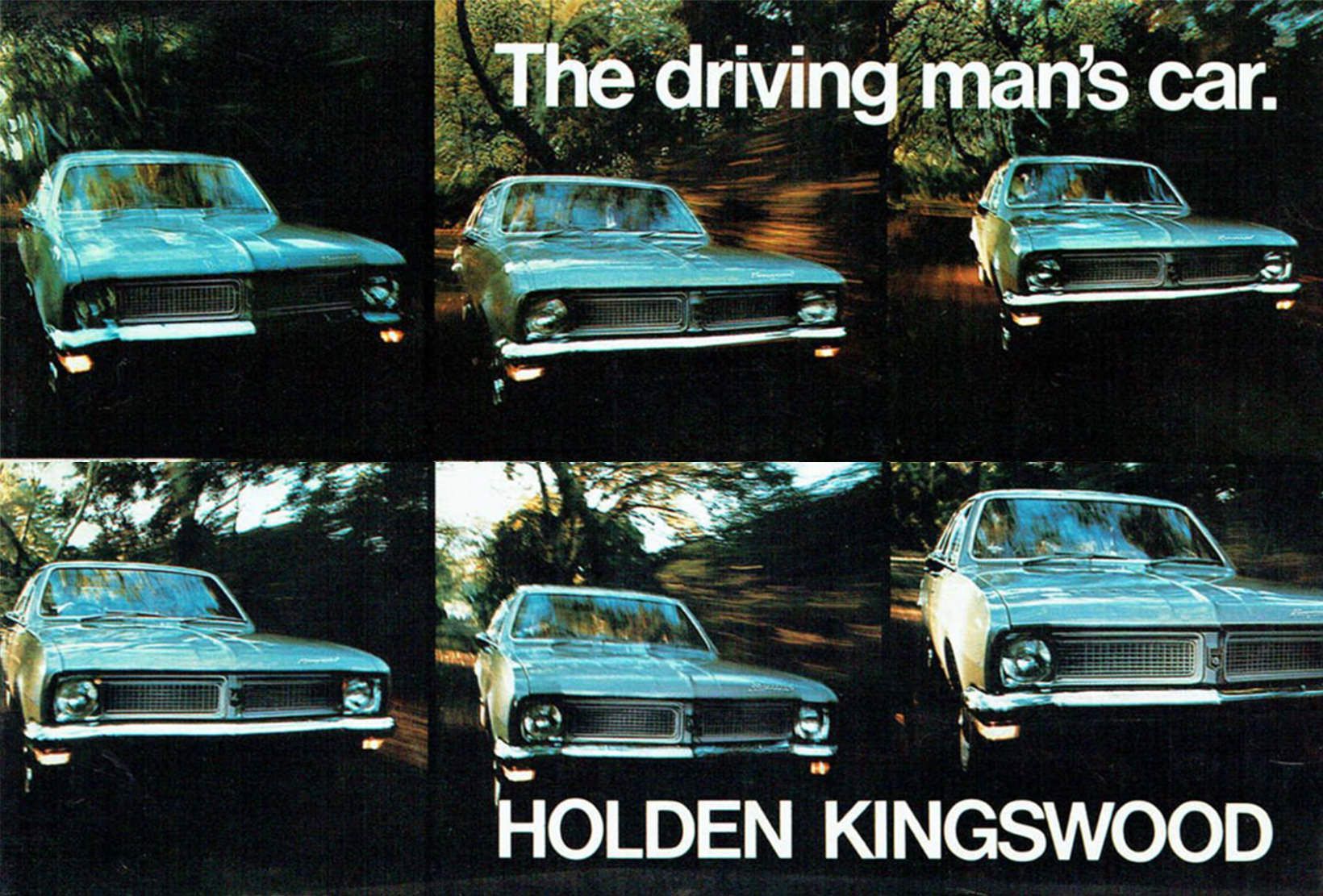 Surprisingly, the base model HG Belmont was one of the better looking cars in the range, devoid as it was of chrome and trim. Meanwhile, if your new model has so few changes to boast about, just use as many photos of the car as you can and hope no one will notice.

Compared to the HT, the HG featured minor revisions to the grille, rear lights and location of the badges. Maybe the seat’s upholstery pattern was varied. But who really noticed! The motors stayed the same, too.

Holden talked up that their new TriMatic automatic transmission was now optional on the HG, but even it had been fitted to the 1969 LC Torana and late production run HTs. Move on, move on, nothing to see here.

A placeholder the HG might have been, however Holden dealers still saw 149,640 of them exit their showrooms in just 12 months. To put that number into a 2021 perspective, just the HG model alone would have handed Holden 15% of Australia’s current car market. 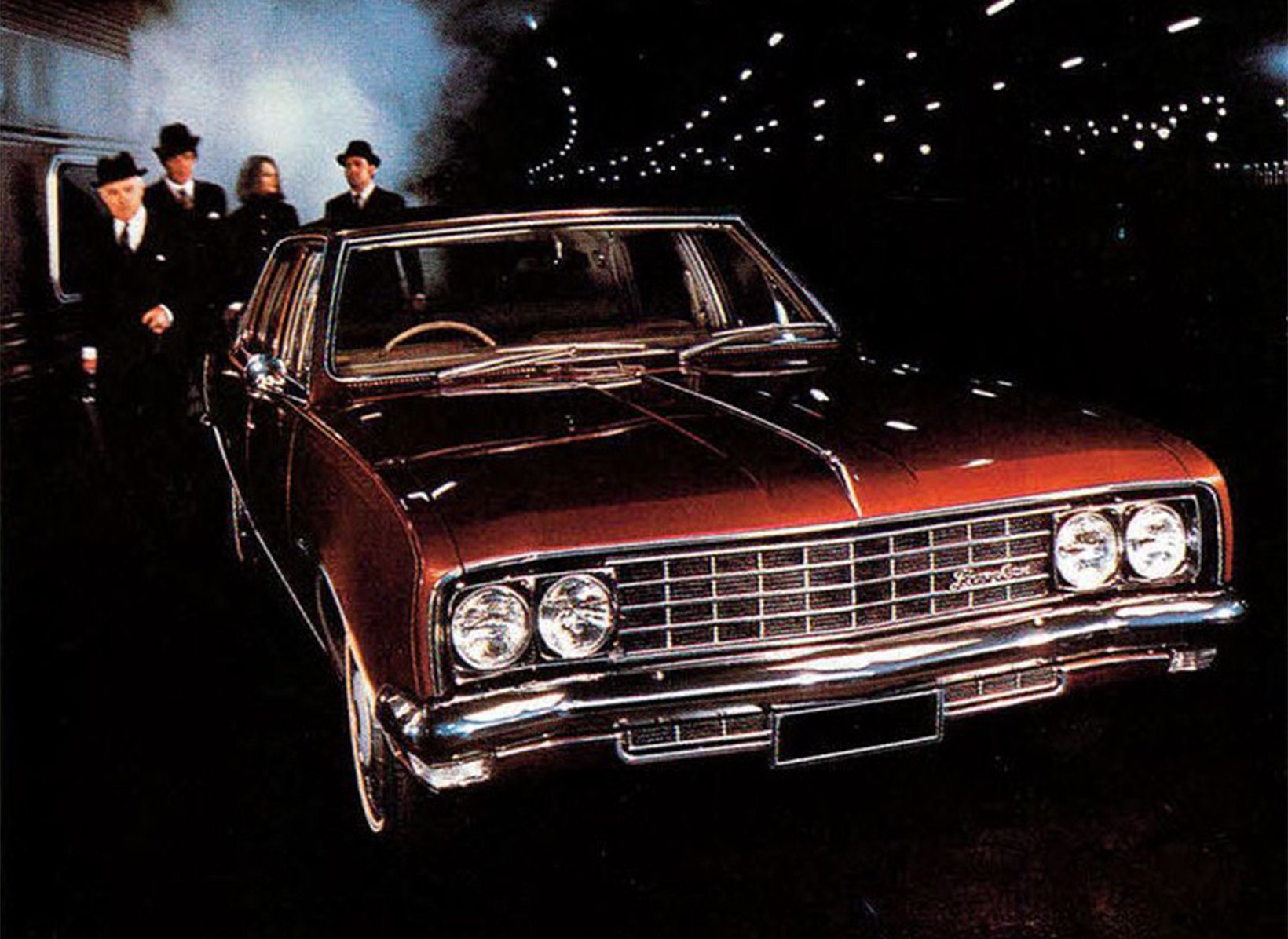 This is the HG Brougham. It was almost identical to the HT. This picture was on the cover of the brochure. The group in the background looks like they have just walked off The Blues Brothers film set.

When VG Valiant was released casual observers would have been forgiven for missing any styling differences between it and its VF predecessor. Subtle is a generous description of the changes to the sheet metal. The VF’s distinctive turn indicators on top of the front guards were retained as were the front and rear bumpers. The head lights were changed from round to rectangular. Tail lights went from vertical to square. 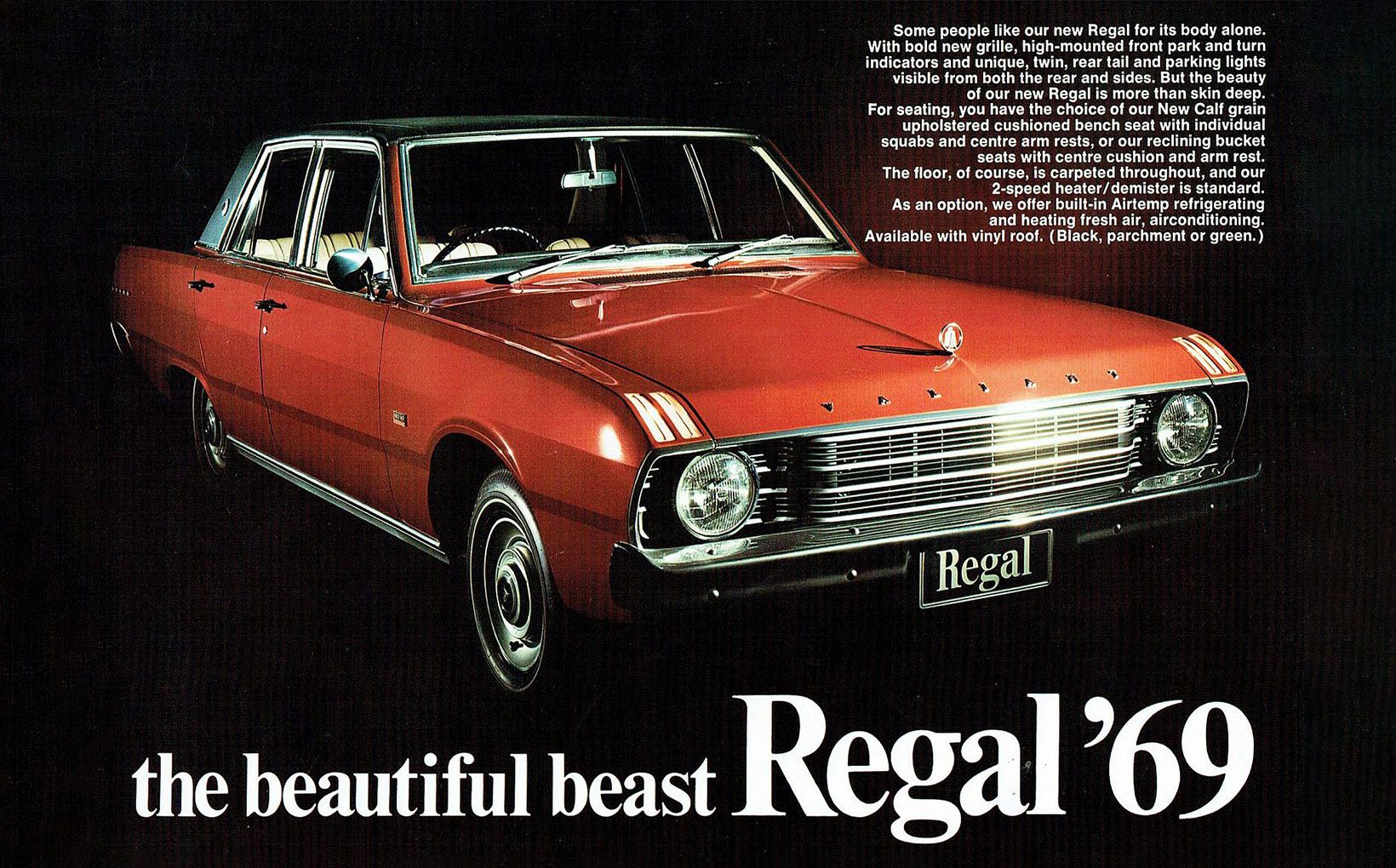 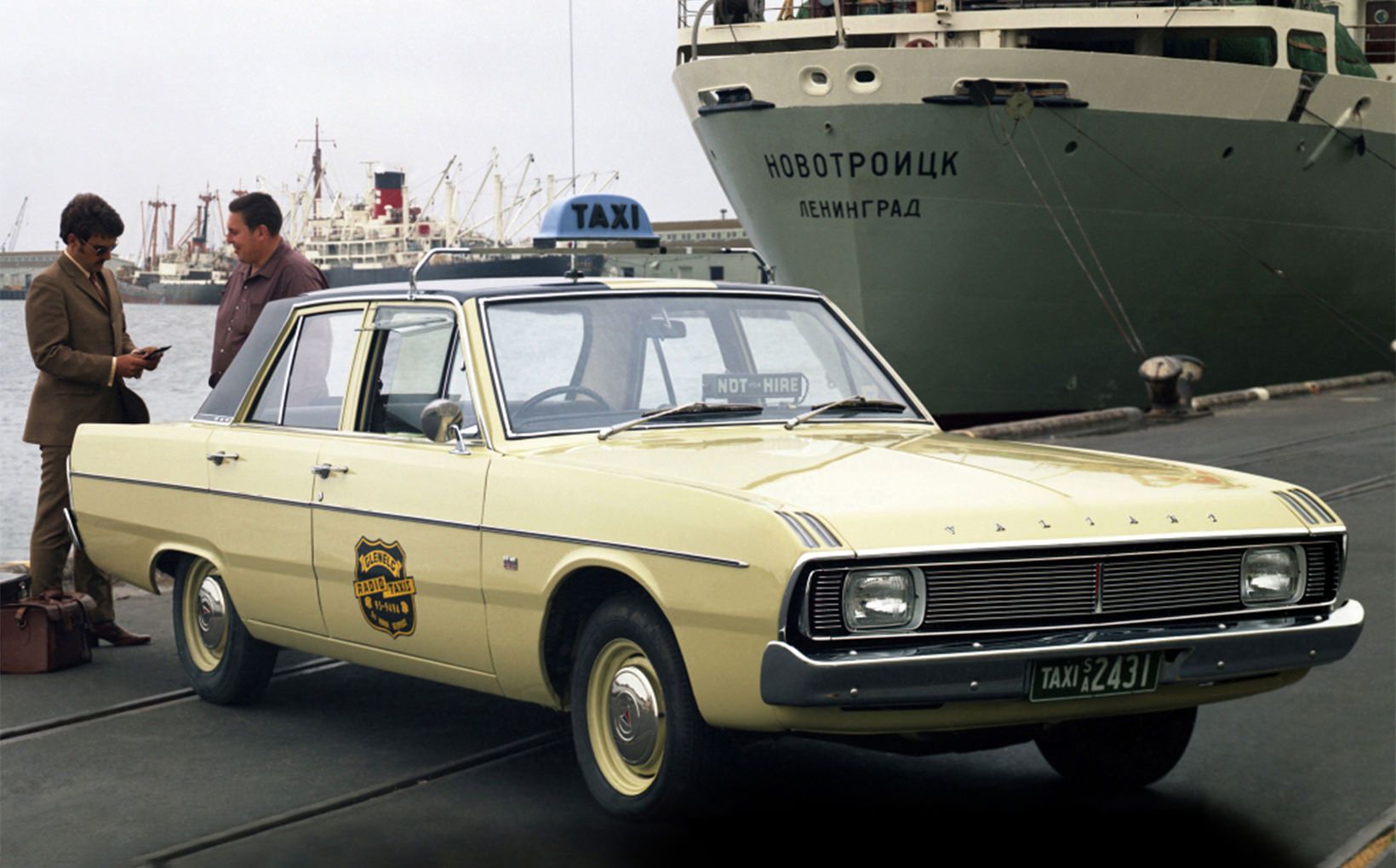 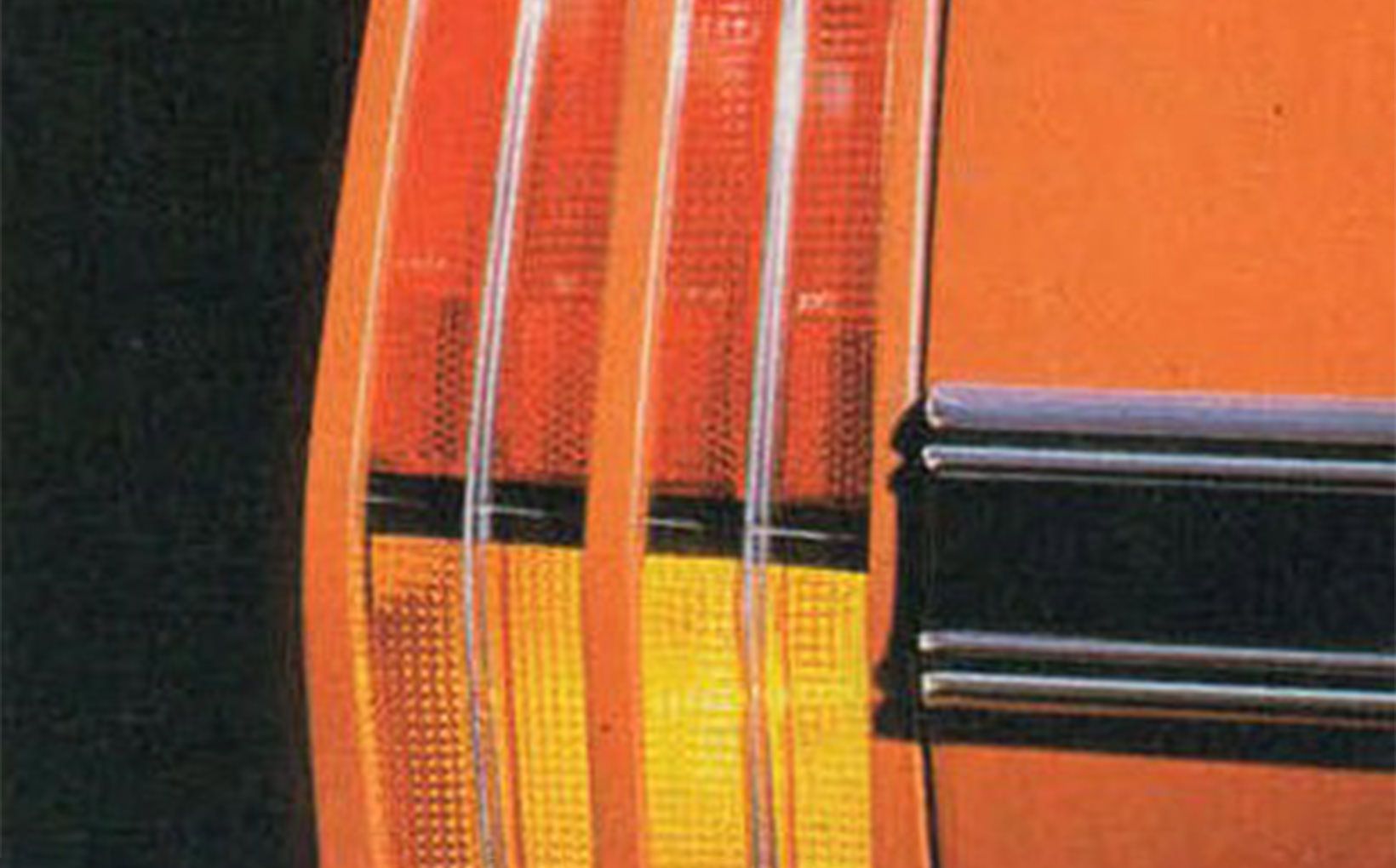 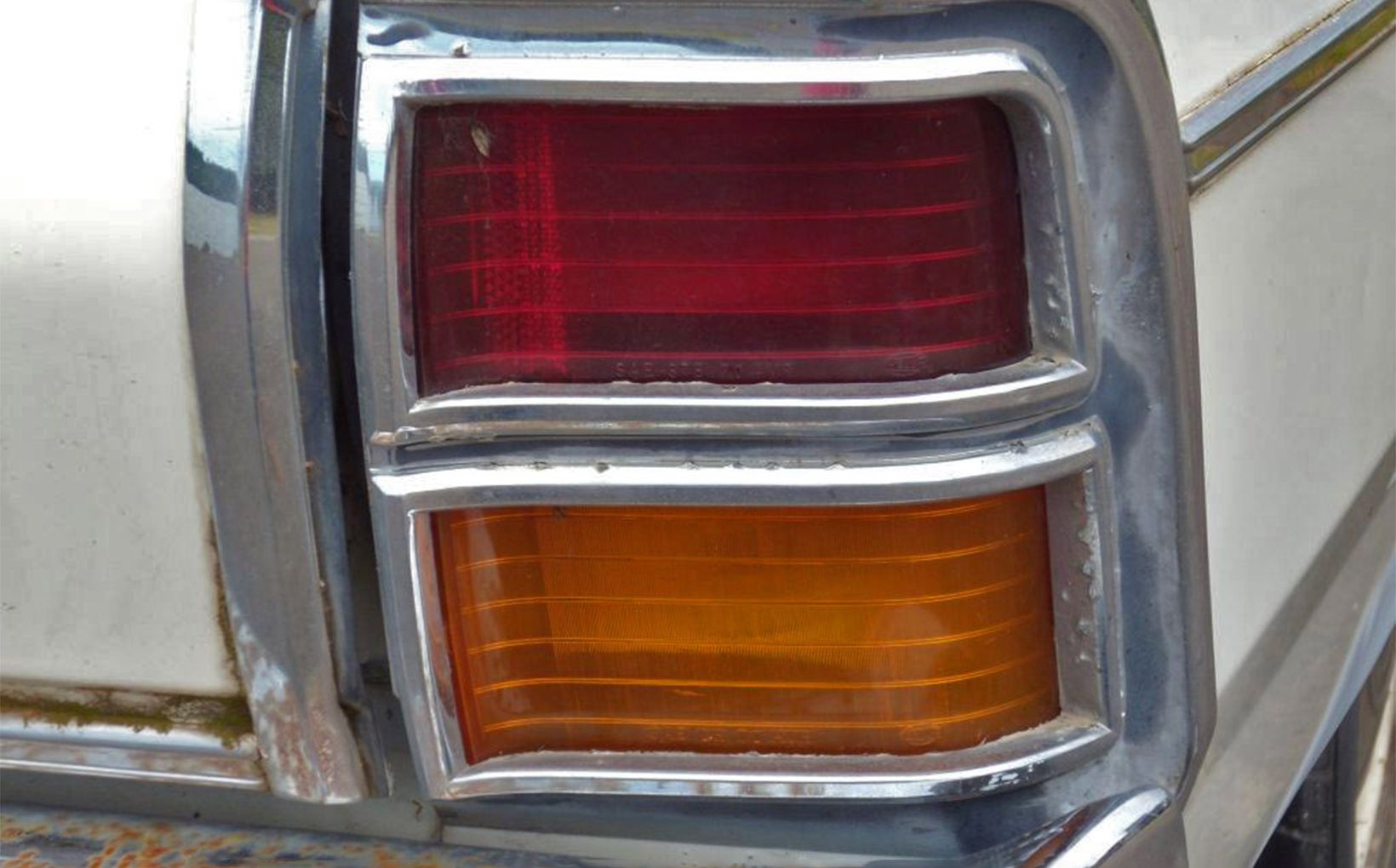 Like the Holden, the VG Valiant exhibited little external change from its VF predecessor. The big news was all under the bonnet.

When it was all boiled down to basics, the VG’s styling was another in a long line of cars which had taken their overall shape from the US Plymouth Valiant and Dodge Dart. As it turned out, the VG would be the last of this line, because its replacement, the VH, was styled especially for Australia.

Since its debut in 1962, Chrysler Australia had positioned the Valiant as a cut above Ford’s and Holden’s family cars. Their strategy of combining the Dodge and Plymouth into one car by tweaking the styling, also included toughening it up for our more rugged conditions and offering the largest capacity and most powerful six cylinder engines of the Big Three.

Although it was priced a little higher, the local Valiant found willing buyers wanting something more powerful and better equipped than its competitors. But it never sold anywhere near the volume of the Falcon and Holden, and that impacted Chrysler’s ability to make adequate profits and invest in future models. 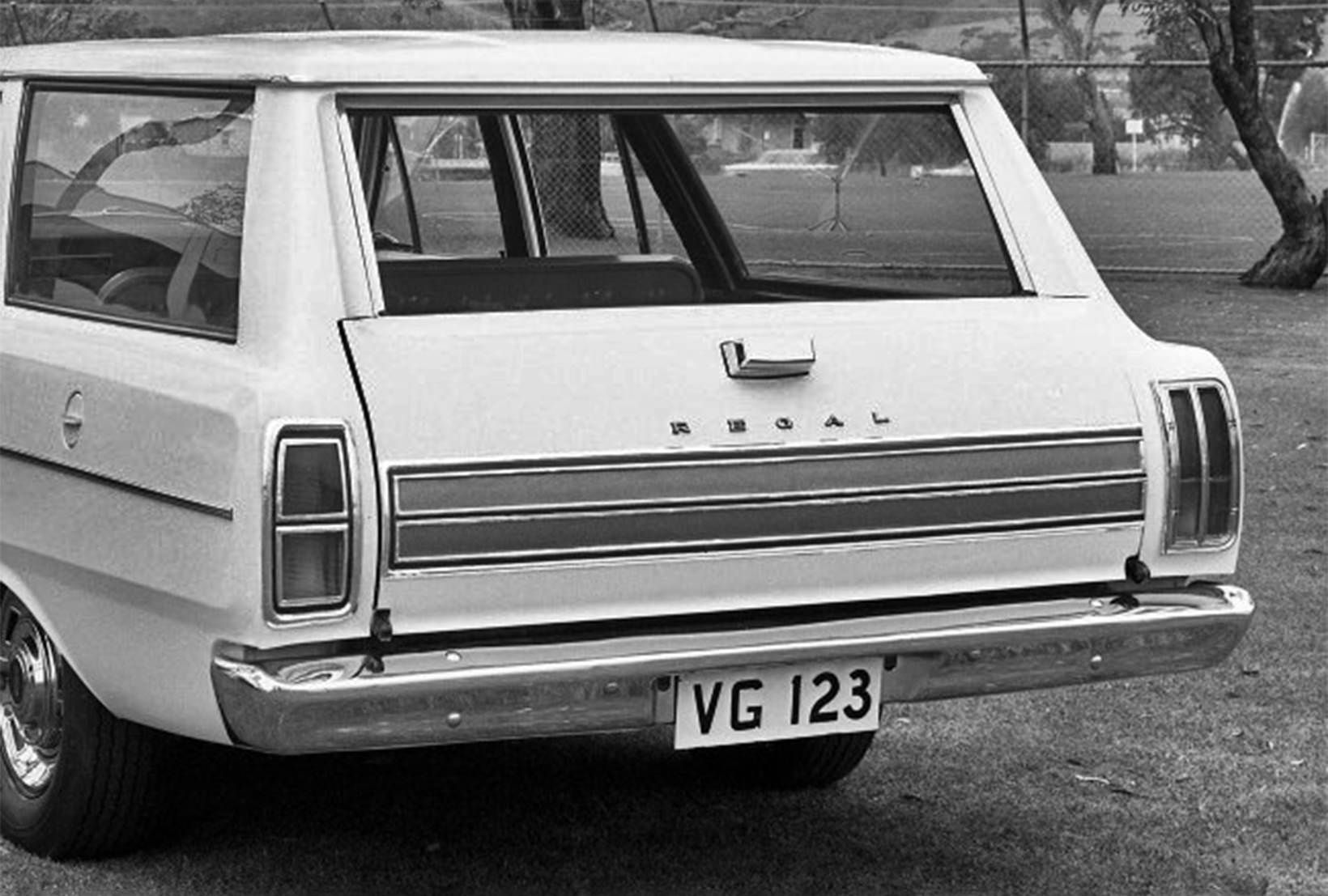 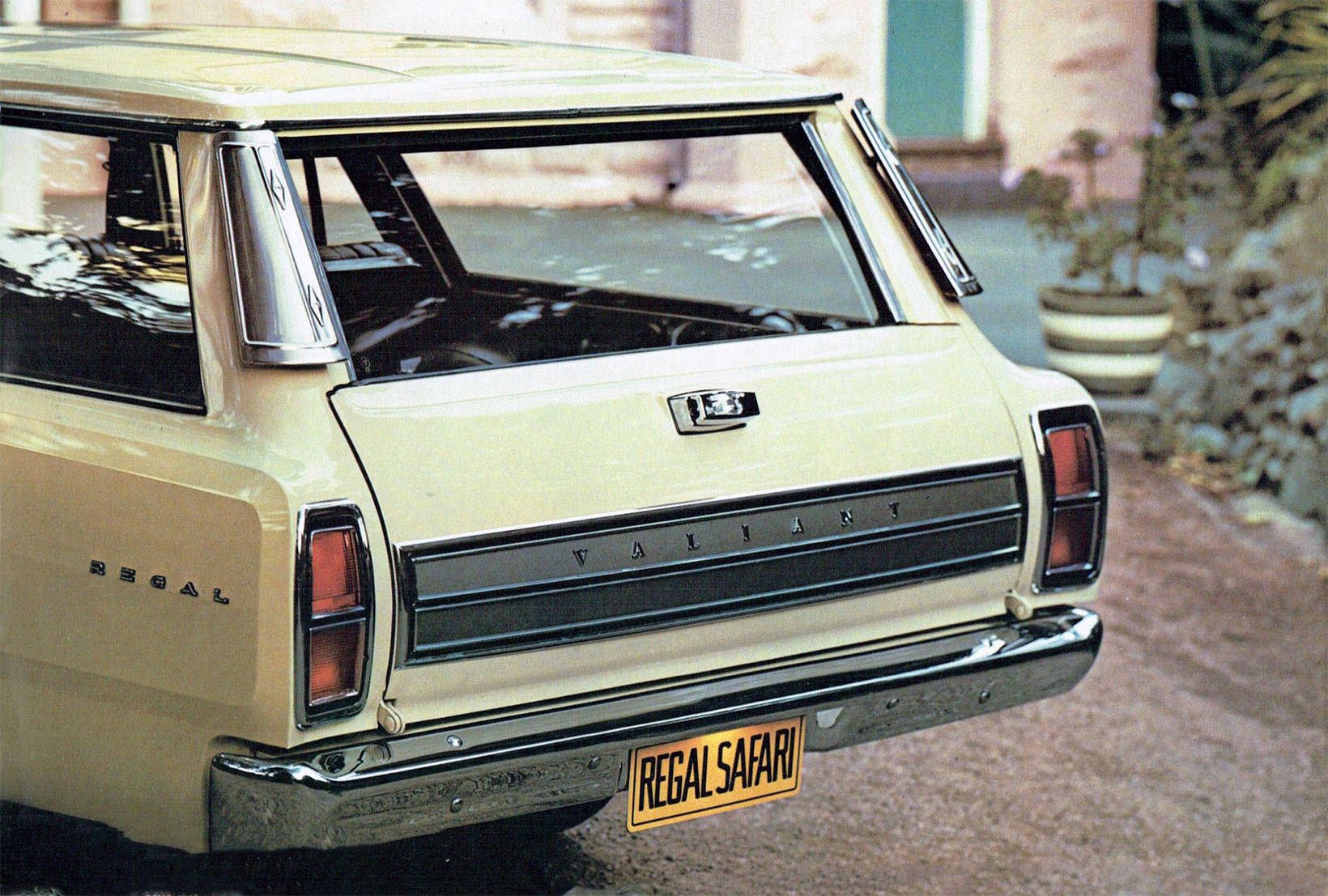 Chrysler did not have much money to effect significant change. The black and white photo shows two ideas for the VG wagon tail lights. The left side proposal was selected.

If the folks at Holden had nothing really to shout about with the HG, Chrysler Australia at least did have a surprise in store for us with the VG.

The BIG news was its new range of engines, the now legendary “hemi” six cylinder unit. It played into the strategy of offering more power than the opposition.

But wait, there’s more. To add gravitas to the occasion, motor racing icon, Stirling Moss, was hired to front the advertising campaign. 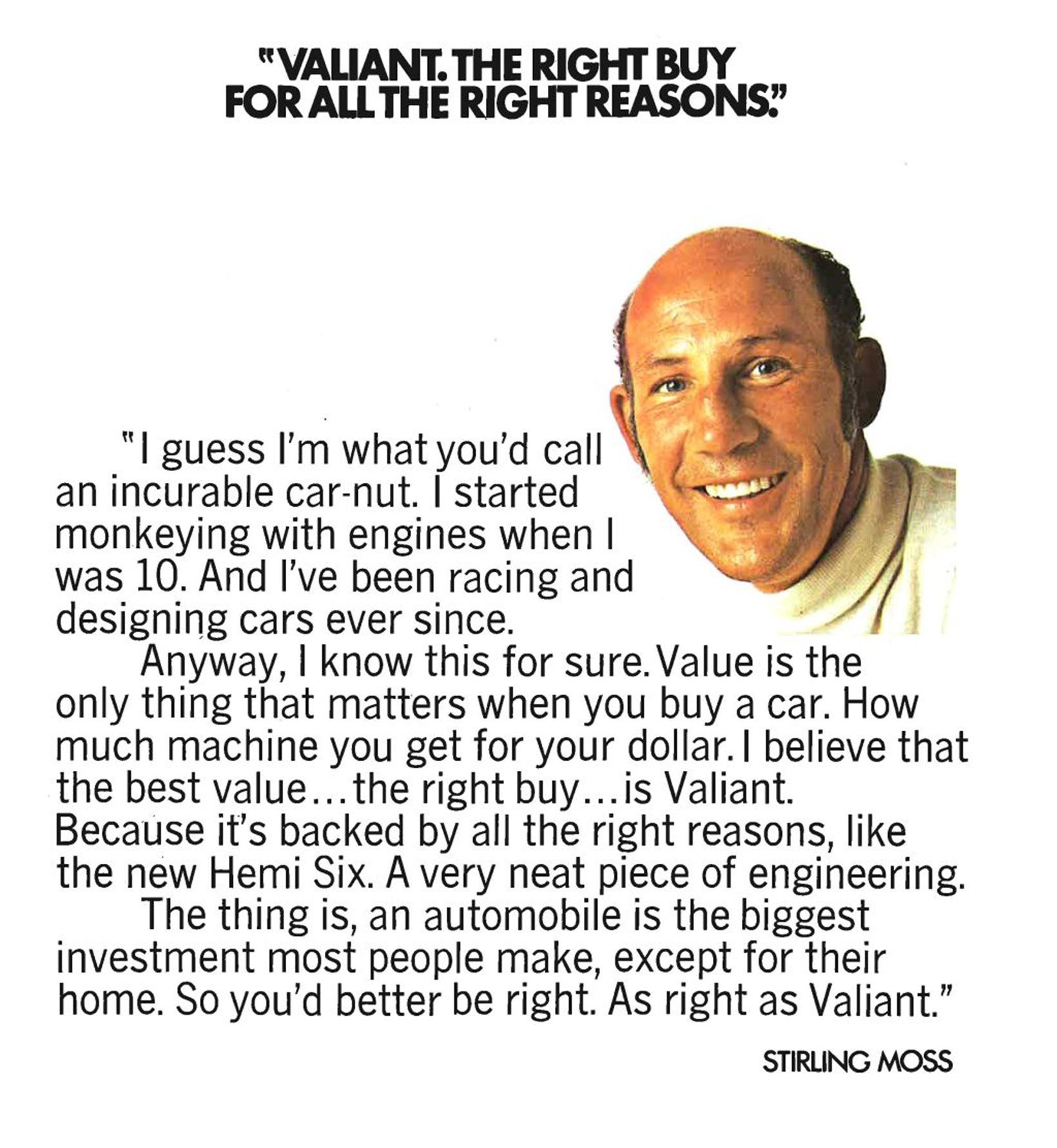 Stirling Moss makes his pitch for the Valiant, for all the right reasons.

The origins of the VG’s “hemi” six go back to the USA in the mid-sixties. Chrysler was developing a new range of six cylinder engines for its light and medium trucks, to replace the trusty “slant” six.

When that project was sidelined in favour of a V8, the engine’s development was taken over by Chrysler Australia as a way to increase local content and create a range of motors capable of matching the power of a V8.

By the end of 1969 pre-production engines were being produced. The “hemi” came in two sizes: 215 and 245 cubic inches. For the metricated among us that’s 3.5 and 4.1 litres, respectively. 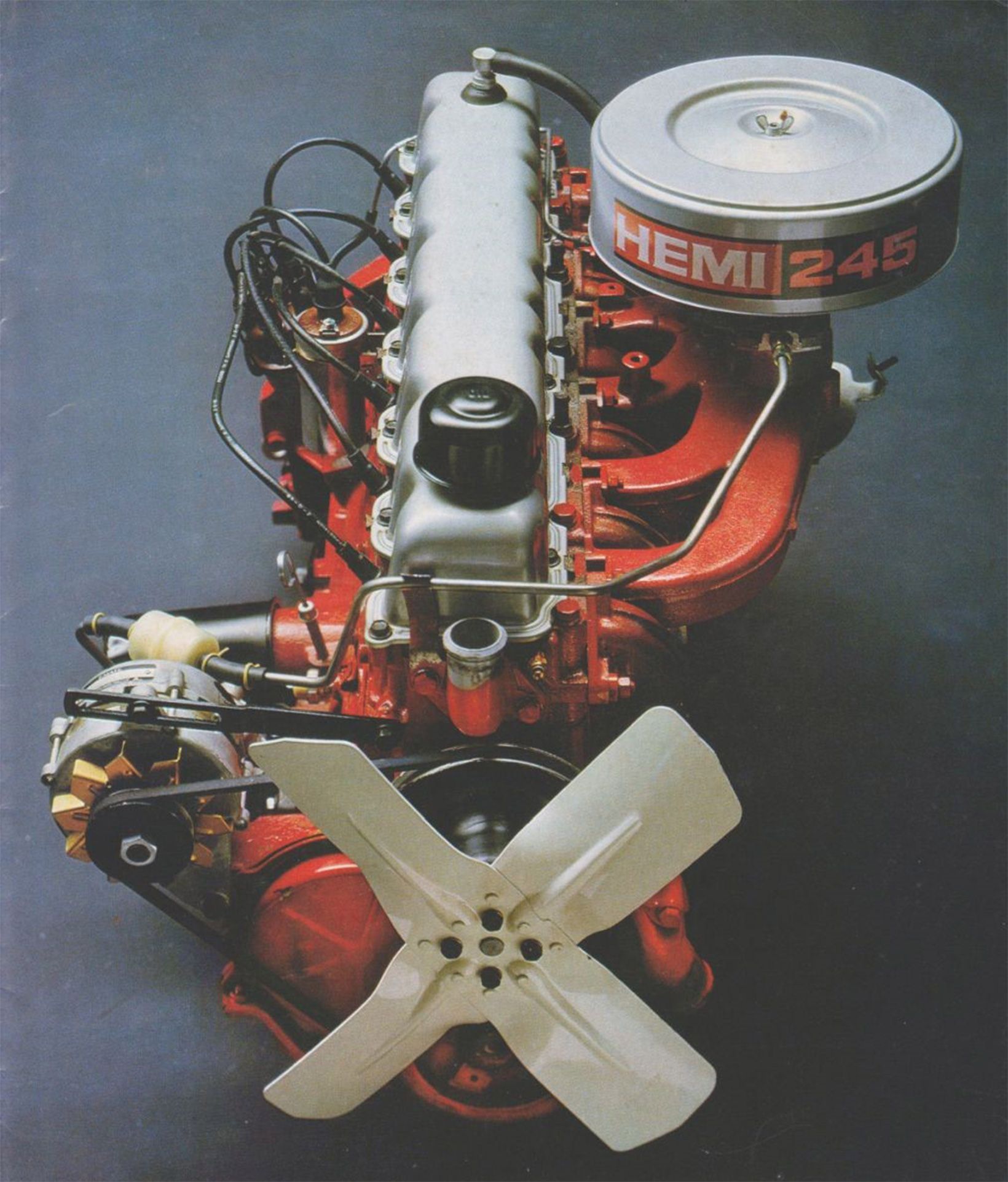 Chrysler’s “hemi” 245 was the biggest and most powerful six cylinder engine offered in an Australian family car at the time.

The new engines allowed Chrysler’s dealers to continue to boast that the Valiant’s smallest six was still bigger and more powerful than Holden’s biggest six.

Holden could only offer buyers its 161 cubic inch/2.6 litre and 186 cubic inch/3.0 litre “red” engines, whose origins could be traced back a decade. In this race it was totally outgunned. To match the larger “hemi”, Holden customers had to take the 253 cubic inch/4.2 lite V8.

Ford was in a slightly more fortunate situation. Its two sixes, with 188 cubic inches/3.1 litres and 221 cubic inches/3.6 litres capacities, at least gave it one engine bigger than the smallest Chrysler motor, but only by a miniscule 0.1 of a litre. Beyond that the next engine was the 302 cubic inch/5.0 litre V8.

And not everyone wanted a V8, which were, rightly or wrongly, perceived as using more fuel than a six.

You will notice the quotes around the word “hemi”. That’s because the motor was not a true “hemi” in the same way of Chrysler’s fabled V8s of the past. 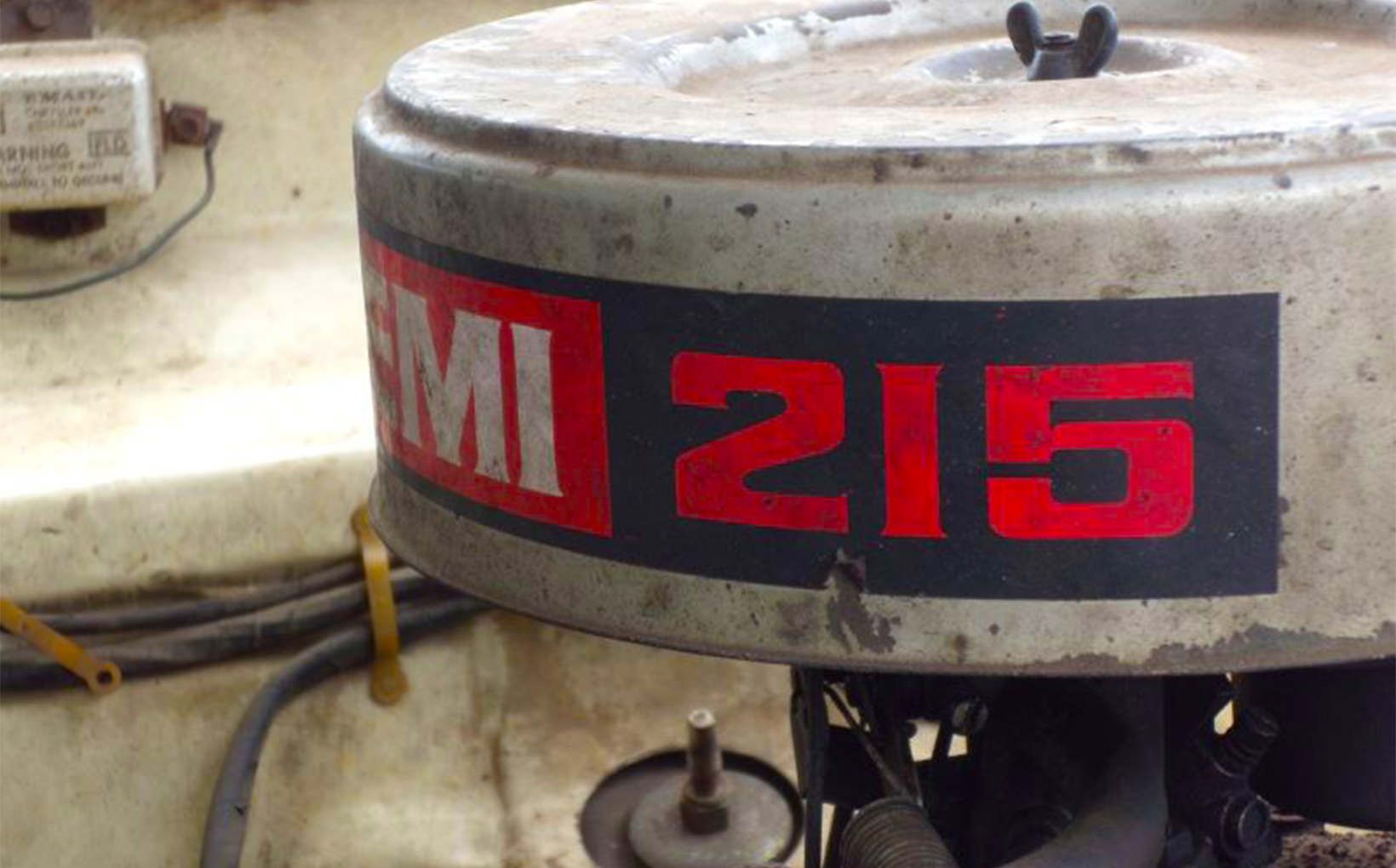 “Hemi” was a descriptor given to the engine by the marketing folks, who saw an opportunity to extend the accepted definition—dome-shaped cylinders and piston tops—to the six because its valves tilted at an angle.

Actually, no one but the purists really cared. The word “hemi” sounded great and looked good on the decals and badges.

A decade ago, the owner of the business which fixes any of the Retroautos’ IT and computer problems, drove a VG Valiant. It had been in his family since new and I featured it in one of the now rare, three printed editions of Retroautos. 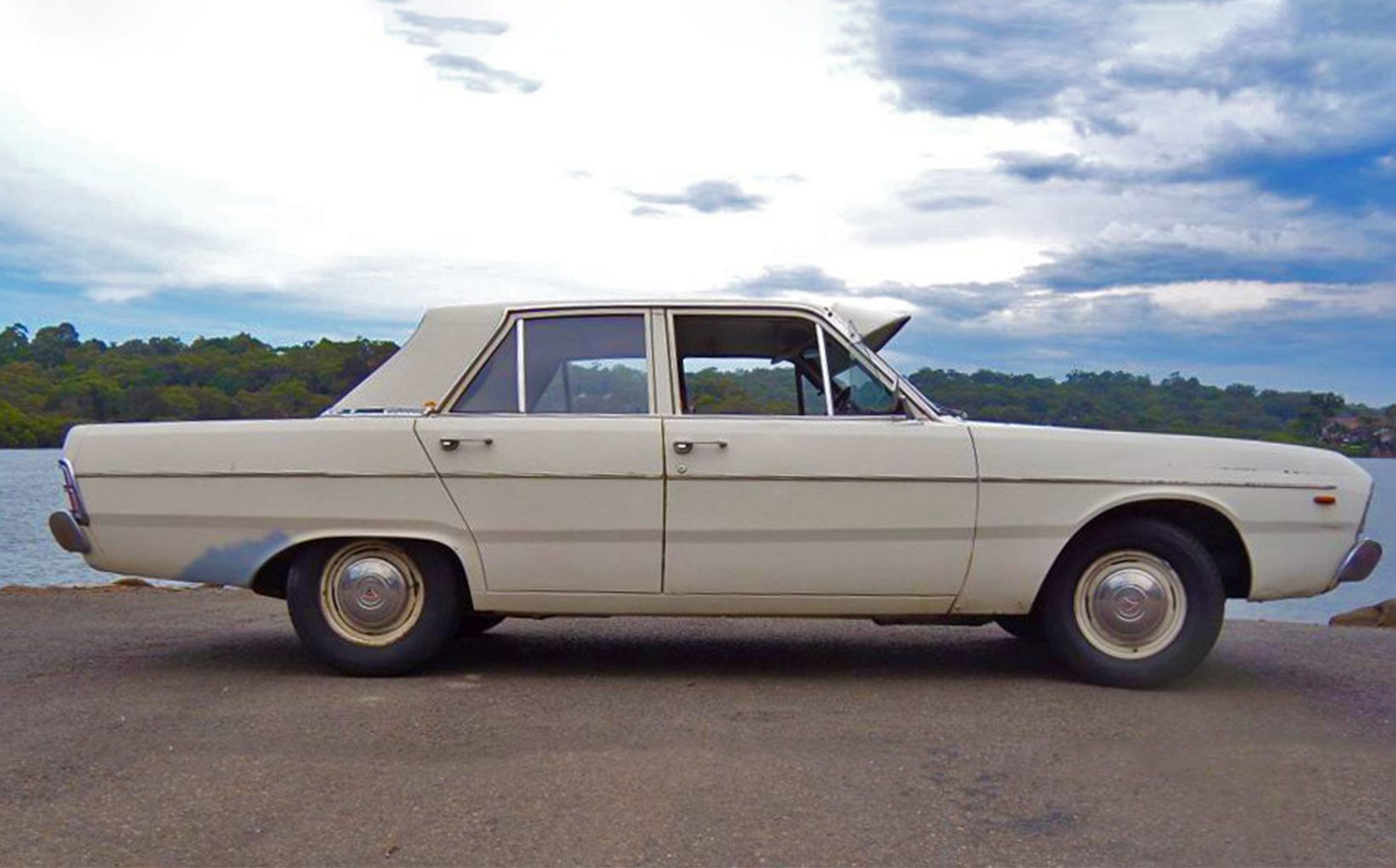 A rare car indeed, a base model VG. It was first prize in a lottery and provided trouble free service of over 40 years.

It was the base model, with the 215 cubic inch six, an automatic gearbox and drum brakes. There was no power assistance of any kind. A manually tuned radio looked lonely in the sparse expanse of the dashboard.

The then owner’s grandmother had been the previous custodian, having won the car in an Art Union lottery after buying a single ticket.

Even after 40 years of constant use, the car boasted a trouble free history. Sure, it was a little worn here and there, with some rust spots, but as basic and reliable transport it was perfect. It gave credence to the notion that the best new car to buy is the last of a model run.

The car was sold to a Valiant collector a few years ago. 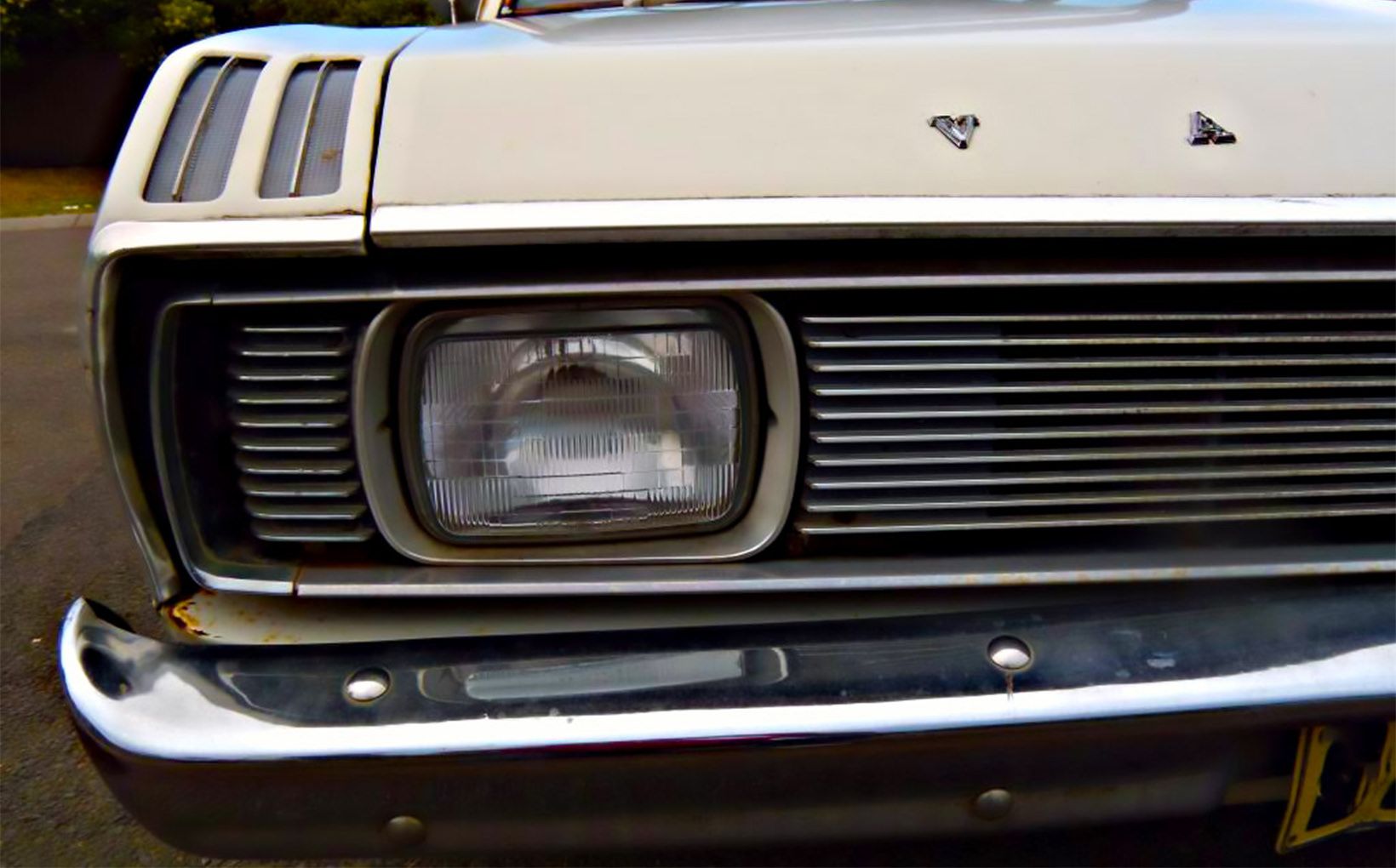 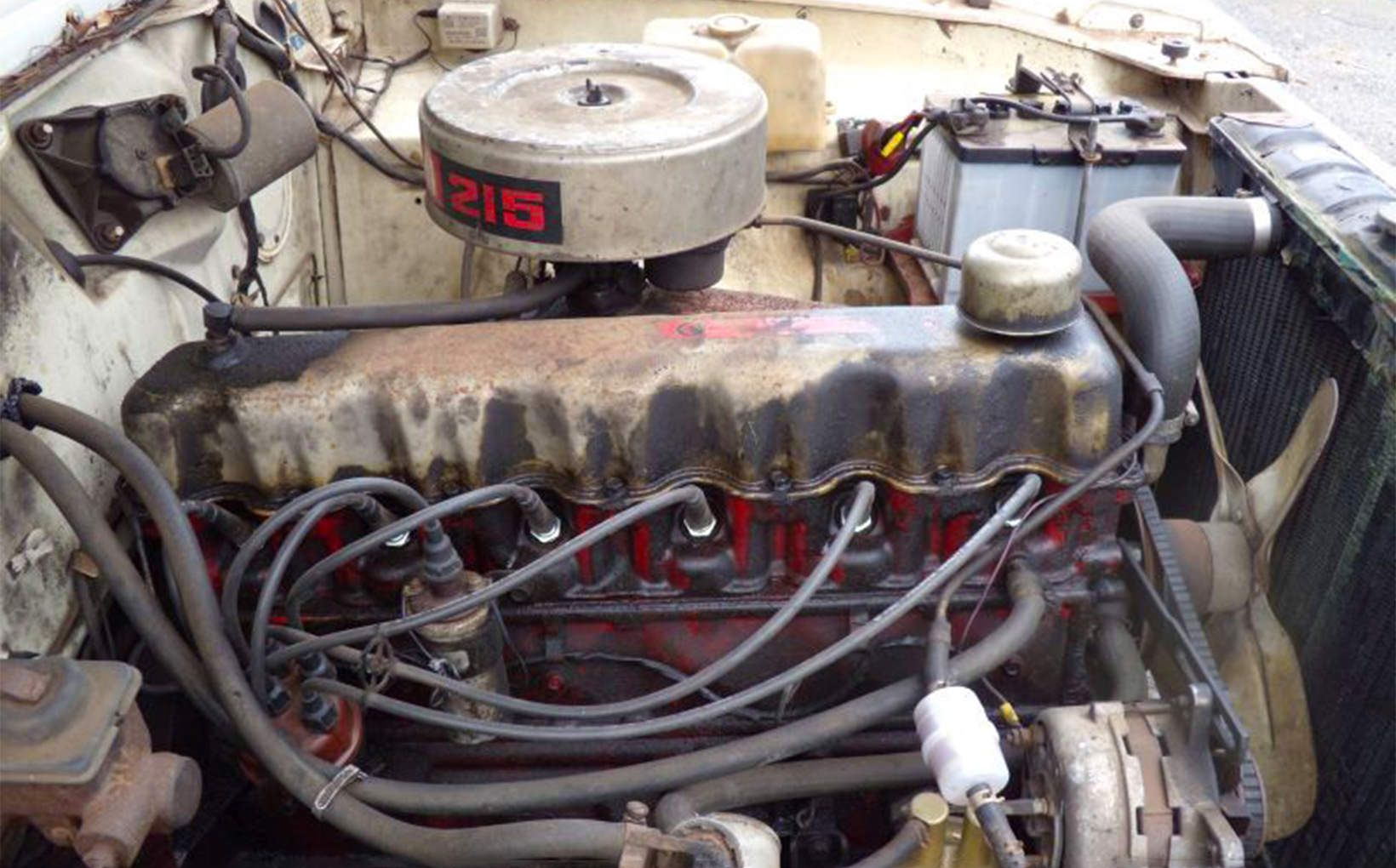 After 40+ years on the road, a little patina is to be expected.

Chrysler Australia’s dealers sold 48,047 VG Valiants in all its body styles. That’s just a third of the HG Holden’s tally, and demonstrates how devoted Australians once were to the lion brand.

Despite its smaller engines, the HG’s overall dimensions where bigger and it offered more passenger room. The Valiant was two inches narrower and its wheelbase was three inches shorter than the HG. With growing families, those extra inches made all the difference when mum and dad were haggling with a dealer.

I know this from experience. In 1970 our family had a HK Kingswood and VF Valiant in the driveway. With teenagers on board the Holden’s roomier rear seat was noticeably more comfortable than the Valiant. 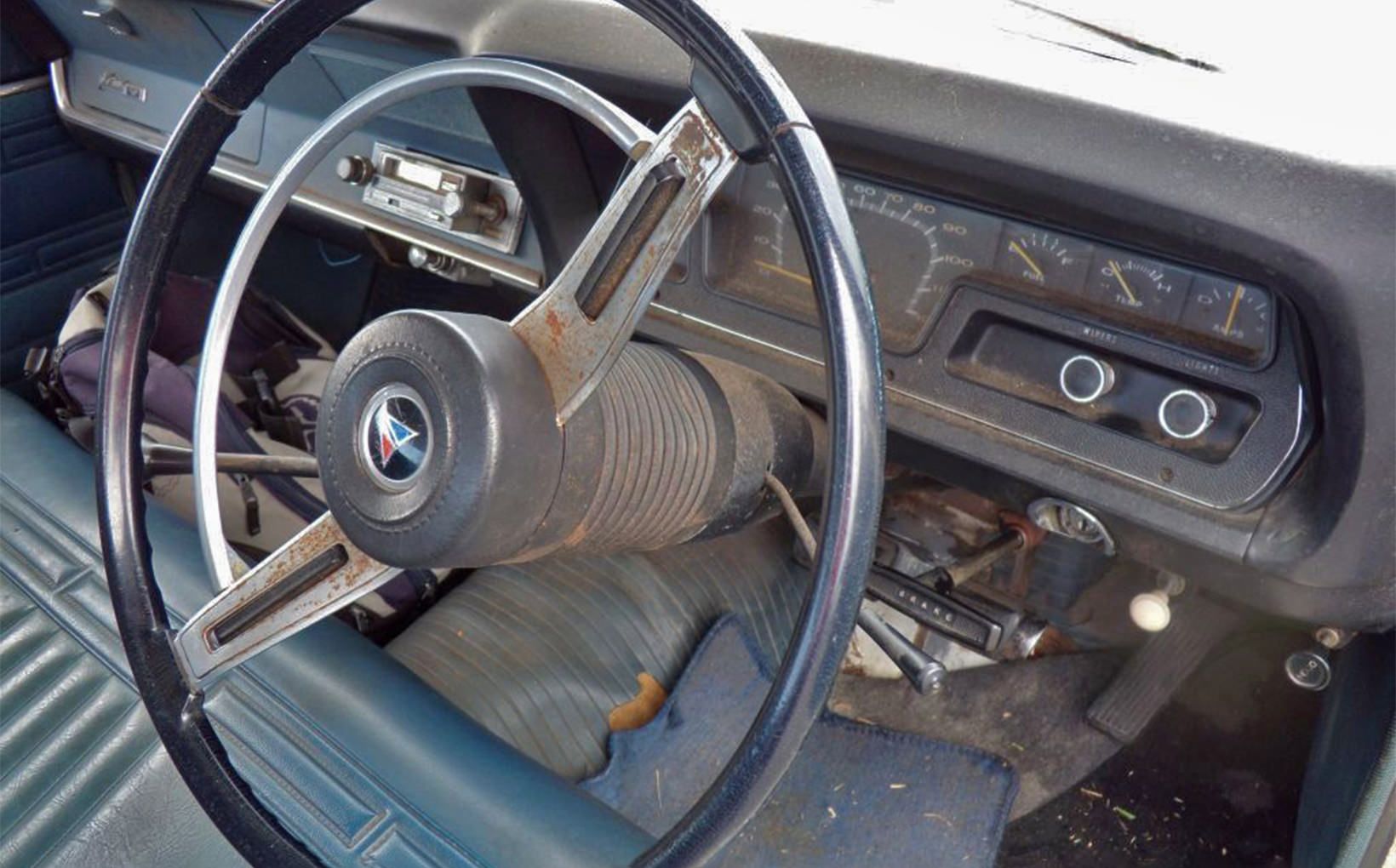 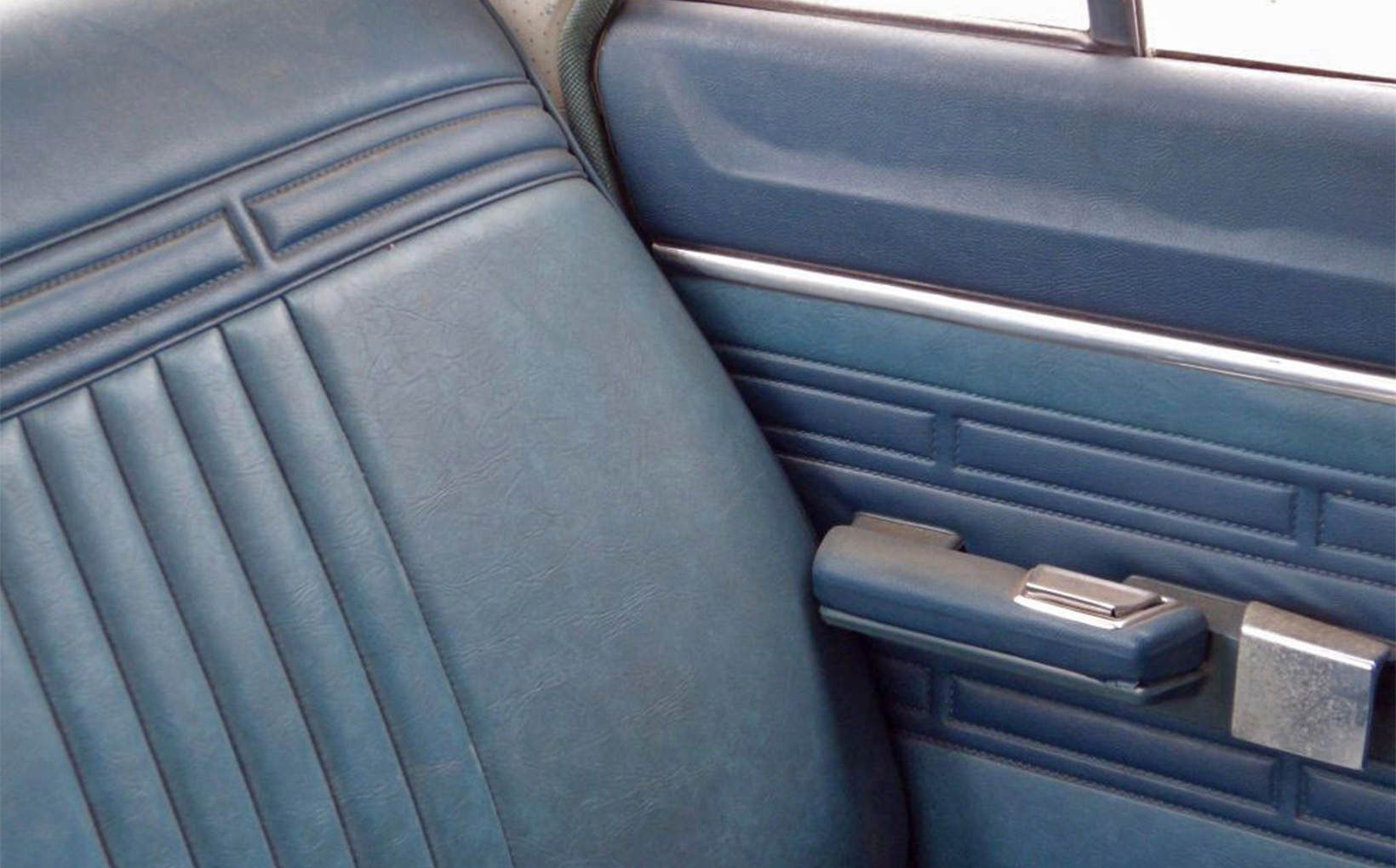 The little used back seat shows no wear and tear, just a little fading caused by the sun. The dashboard and front area have experienced a harder life.

It was this interior space issue which partly motivated Chrysler Australia to invest in an “All Australian” Valiant, the VH, to replace the VG. An objective of the VH was to match Ford and Holden on all dimensions. It succeeded in doing so, but it was the start of Chrysler Australia’s long goodbye from our motoring landscape. And that is a separate story for a later time.

What is a great retro yarn is how Stirling Moss became part of the advertising campaign for the VG.

Author Gavin Farmer in his authoritative book about the Valiant, Finest of the 3, said that in 1969 Chrysler Australia put its advertising contract out to tender. One of the agencies pitching for the account, Young and Rubicam (Y&R) suggested during a meeting that Moss be the spokesperson for the VG because he had great credibility.

Right on cue a Chrysler executive laughingly questioned “and where will you get Moss?”. The Y&R folk opened a side door to the meeting room and in stepped Moss.

The rest is automotive folklore. 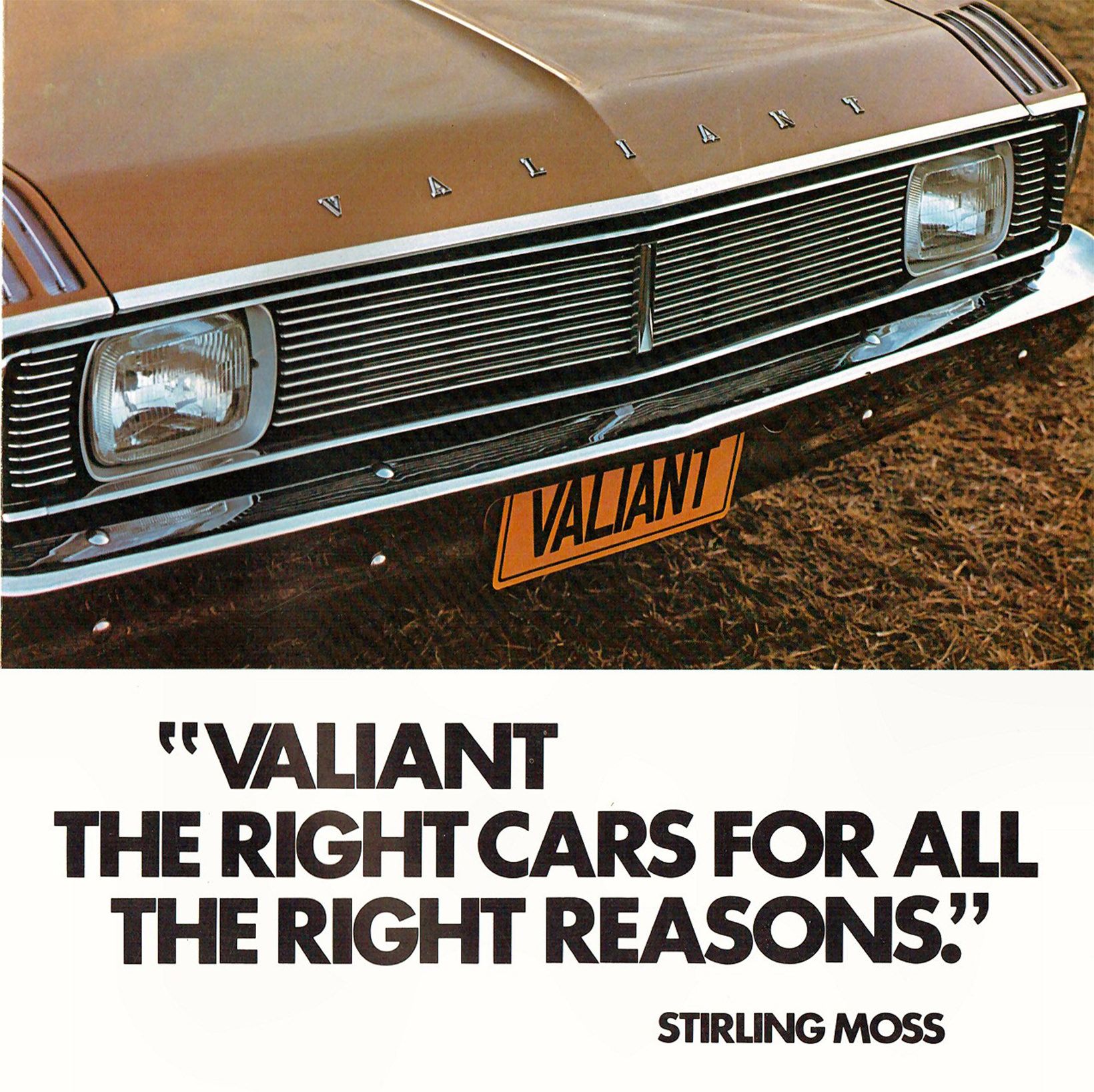 One last message from Mr Moss.