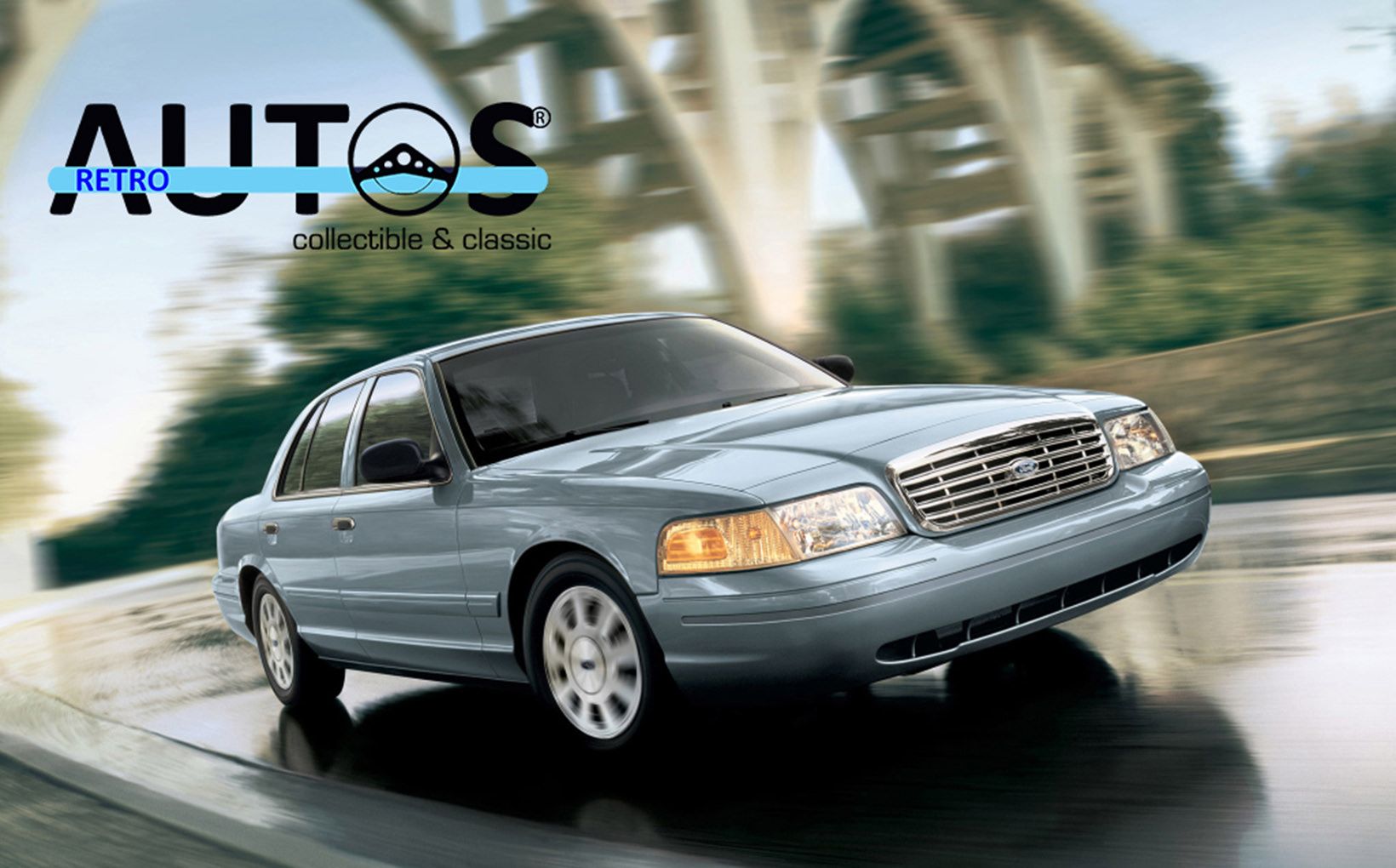 It is almost a decade since the last V8 body-on-chassis, large American “family” sedan was built in the USA.

I am talking about Ford’s Crown Victoria, known to us fans as the “Crown Vic.”

The “Victoria” part of the name was first used on a Model A Ford coupe and was used to describe top-of-the -range Fords into the 1950s. The “Crown” was added in 1955 when a distinctive “crown of chrome” was draped across the roof of a Fairlane coupe. 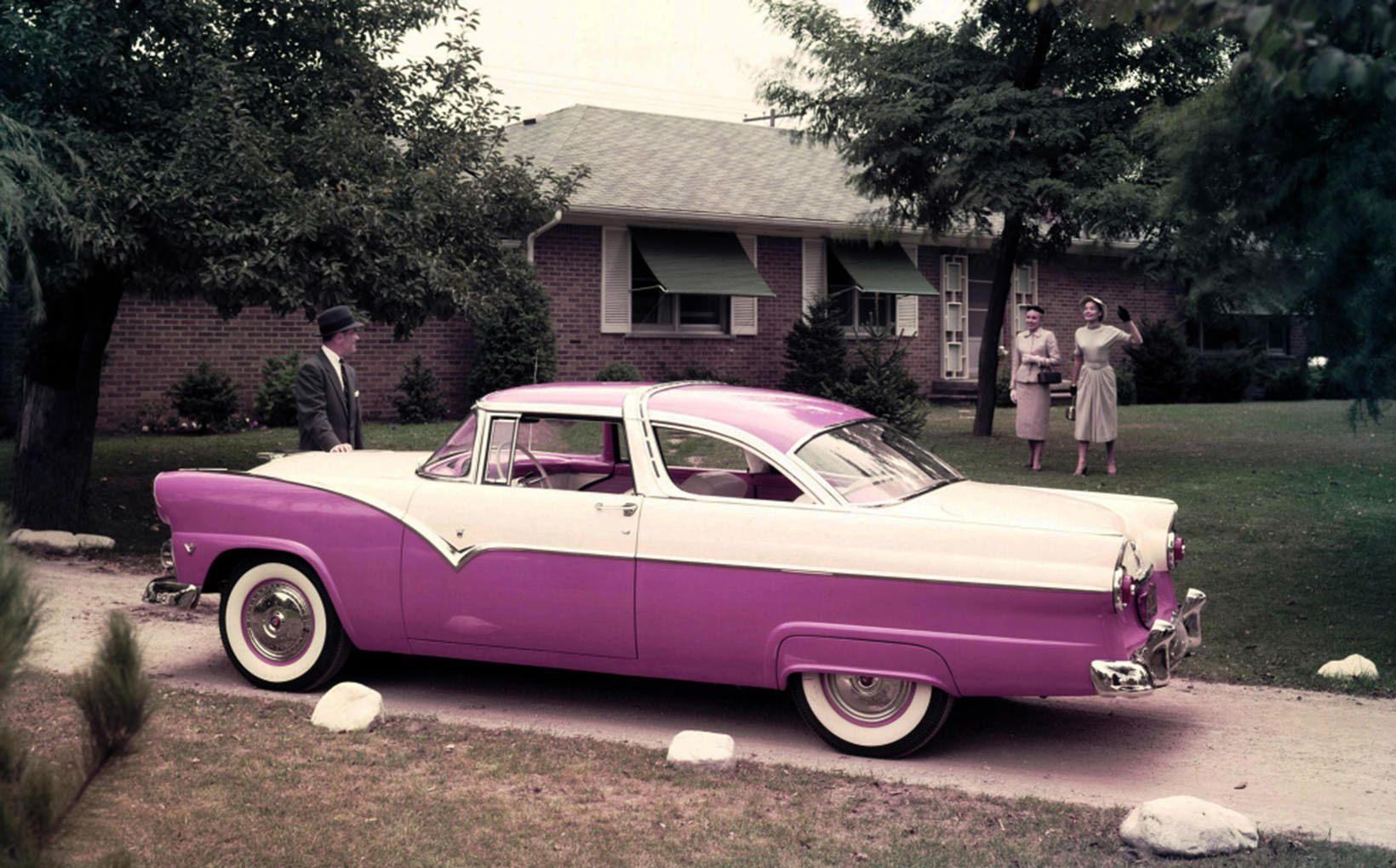 The 1955 Ford Fairlane Crown Victoria “pillared” hardtop coupe was targeted at those who thought the new Thunderbird a little too small for their needs, but still wanted exclusive styling. All images are the copyright of Ford Media 2020, except where noted.

The concept of a large, easy to drive, affordable family sedan was created in America’s post World War II economic boom of consumer exuberance, rising affluence and migration to the suburbs. These were cars built for effortless driving to the recently opened mall and to waft along the newly built transcontinental freeways, carrying parents and their baby boomer offspring to see the sights of the USA.

General Motors (GM) captured the mood with their iconic advertising jingle “See the USA in Your Chevrolet”, made famous by singer Diana Shore. 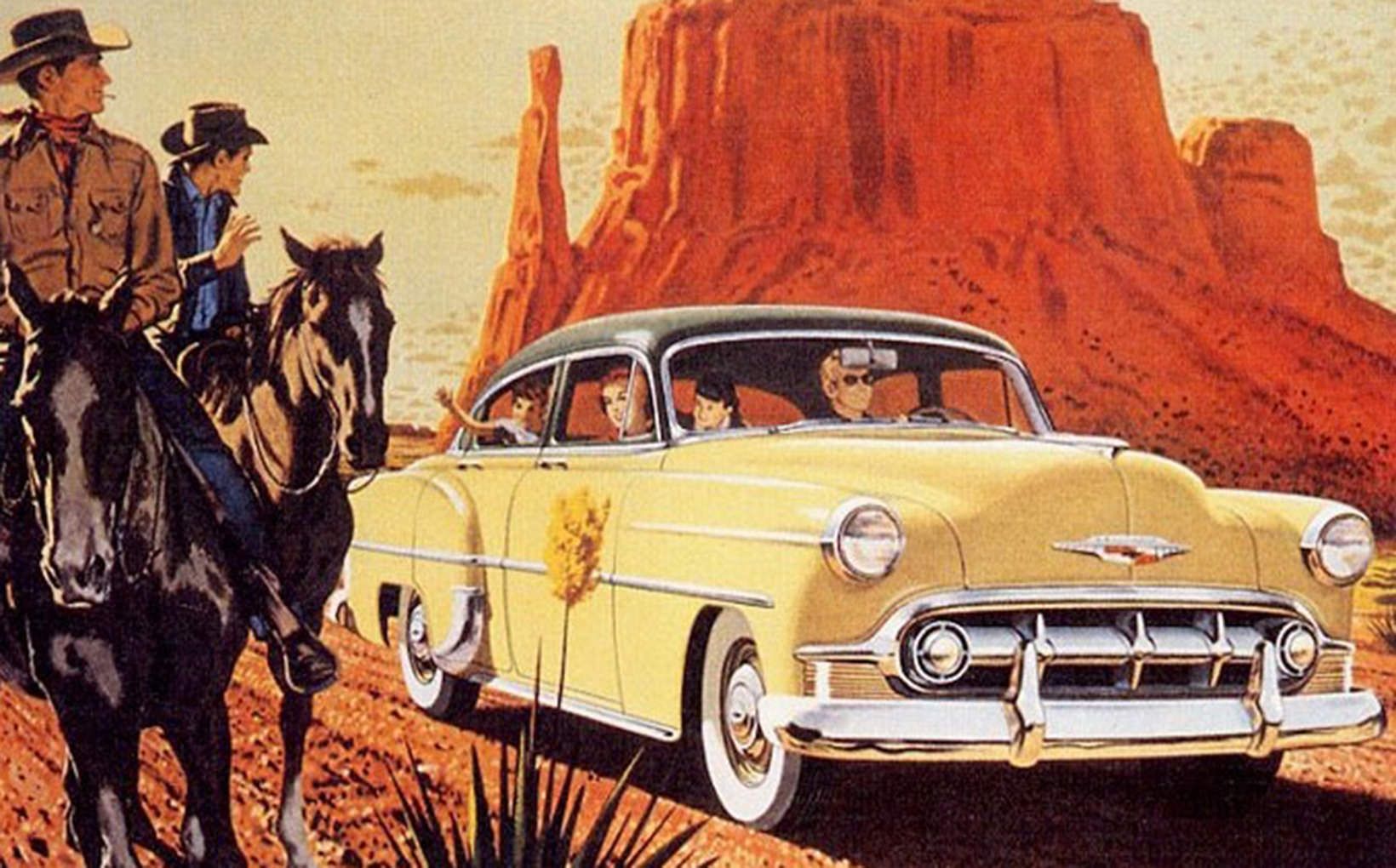 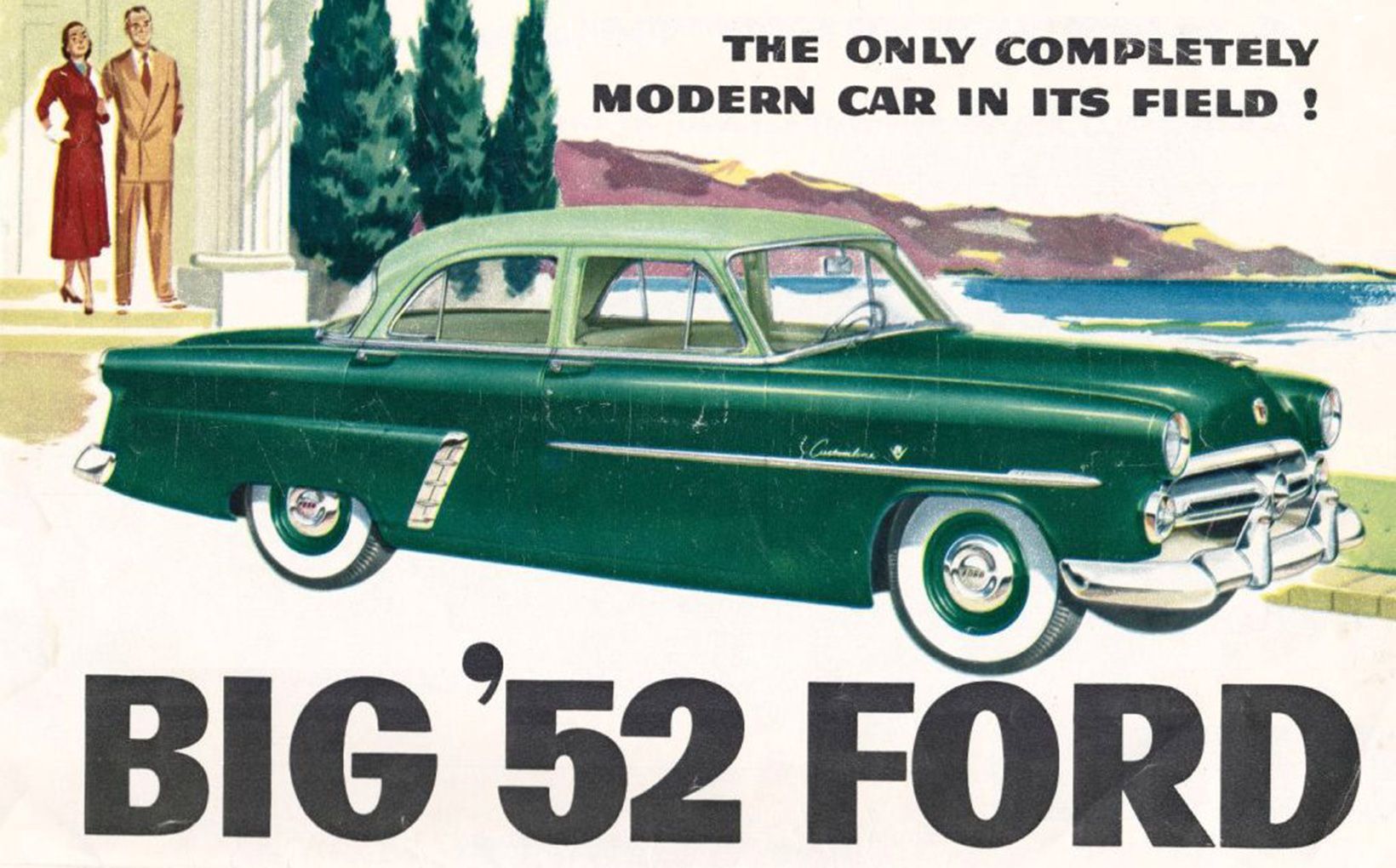 You can mark 1952-53 as the start of Detroit’s upsizing “wars” when Ford and Chevrolet introduced new styling and bigger cars in the low price range. Here’s a family in their 1953 Chevrolet seeing the USA and an advertisement for the BIG 1952 Ford.

All of Detroit’s car makers enthusiastically joined the sing-along. They recognised and actively fed the seemingly endless appetite for upsized cars. For the next two decades America’s cars grew longer, wider, roomier and lower. The suspensions became softer as engineers sought to isolate occupants from the realities of the road. Automatic transmissions, air conditioning and power assisted steering, brakes, windows and seats made driving a pleasure, not a chore. Engines grew larger and more powerful. 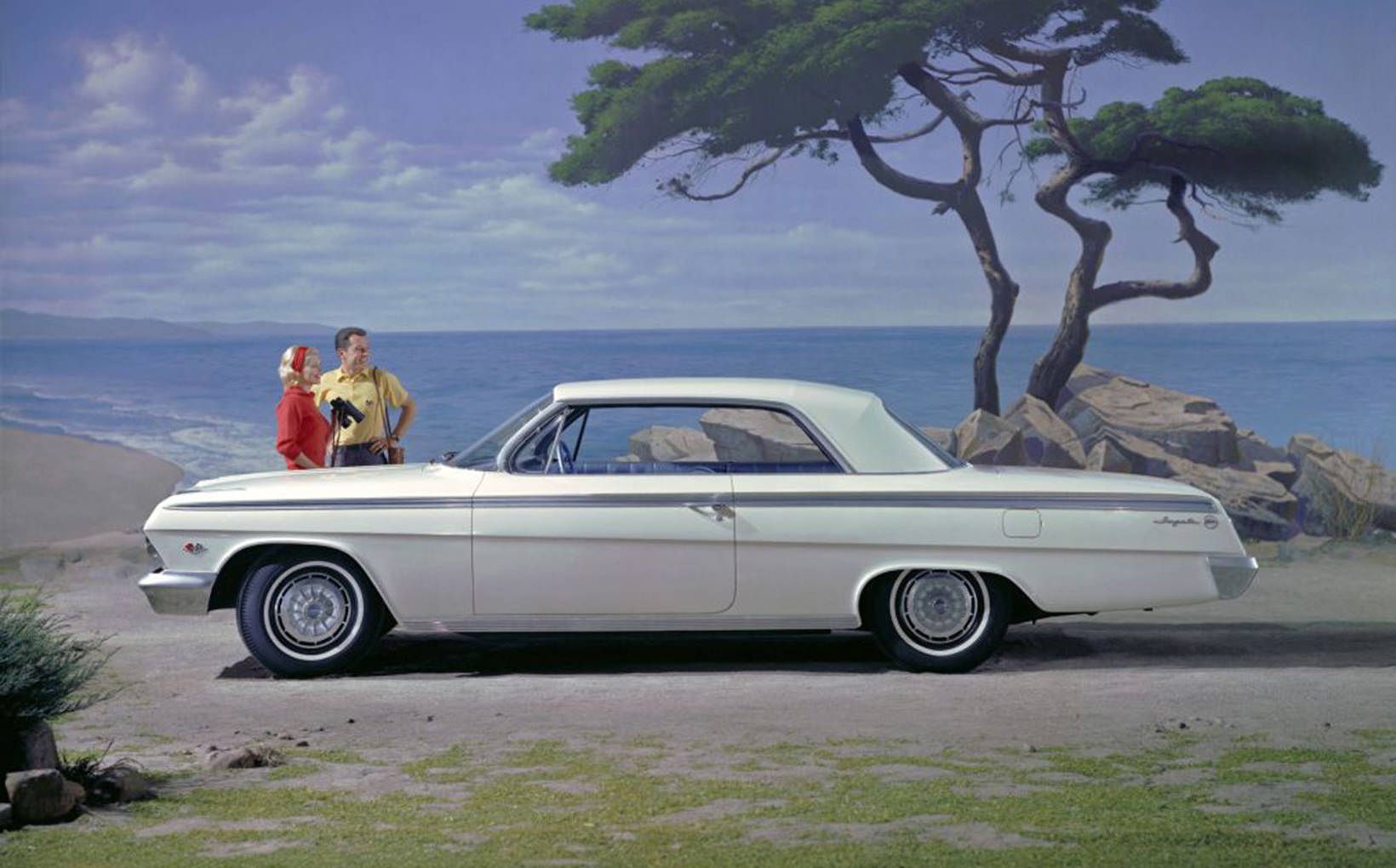 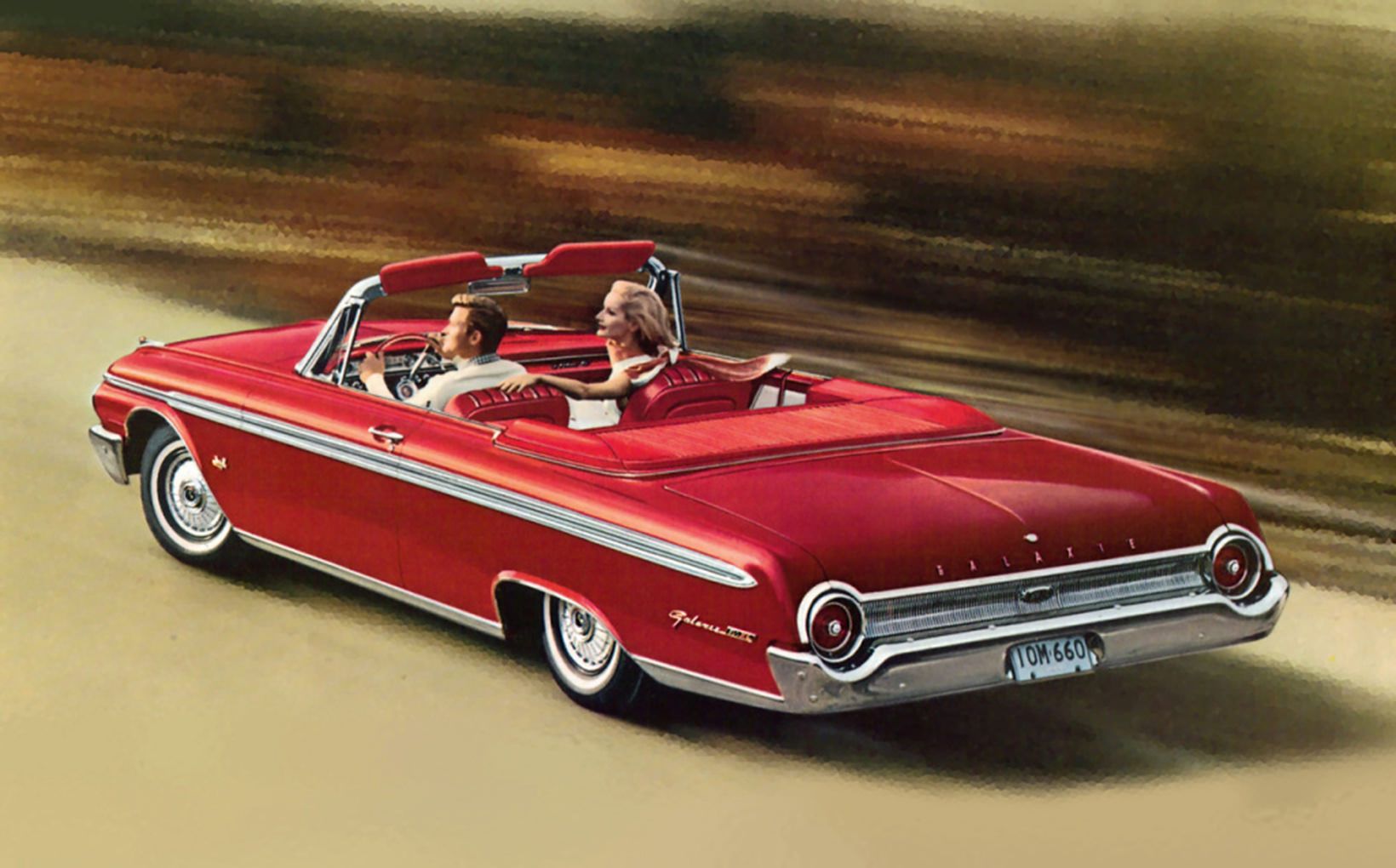 The 1962 Chevrolet and Ford Galaxie demonstrate how long, low and wide American family cars had become in less than a decade. The upsizing would continue. 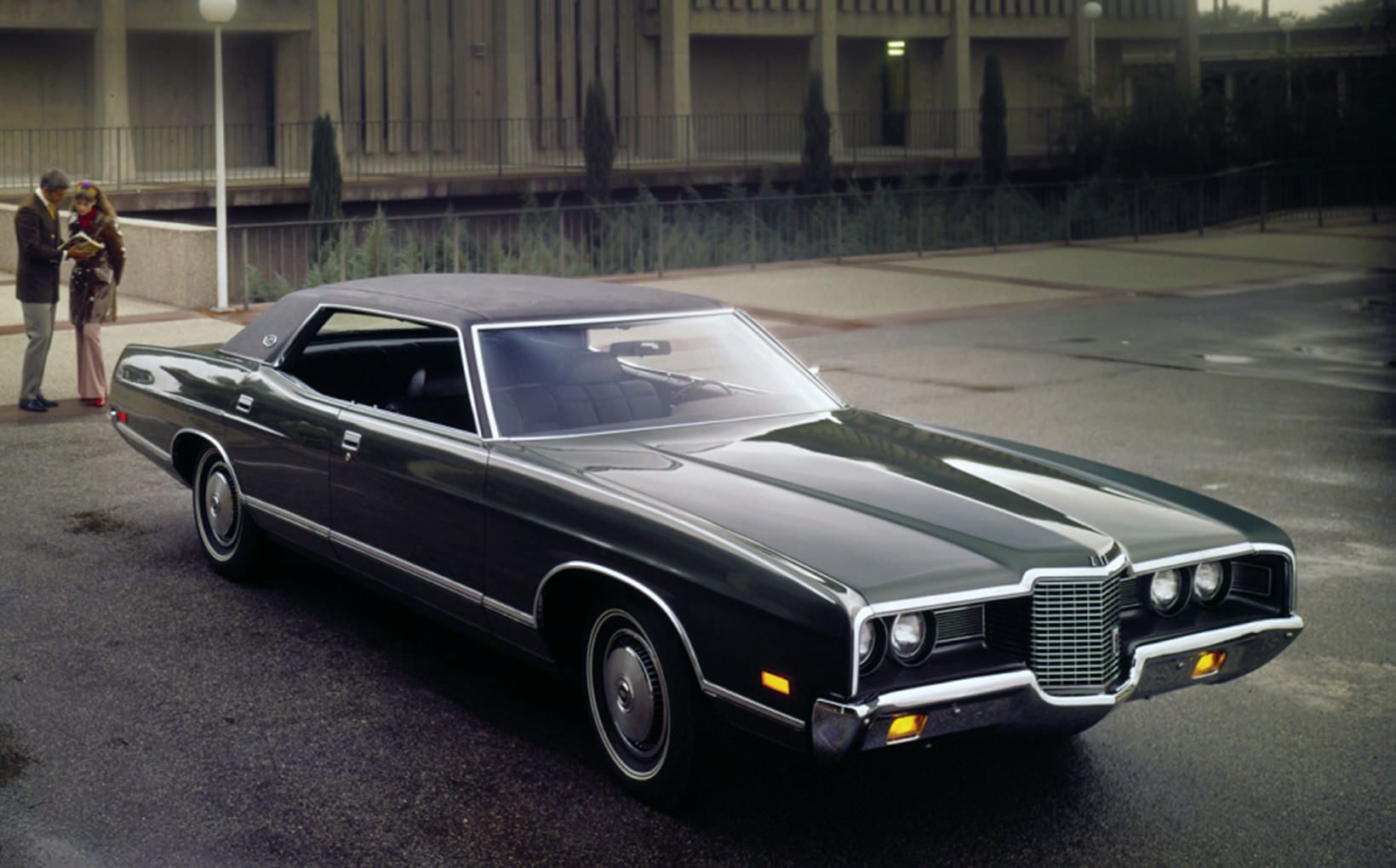 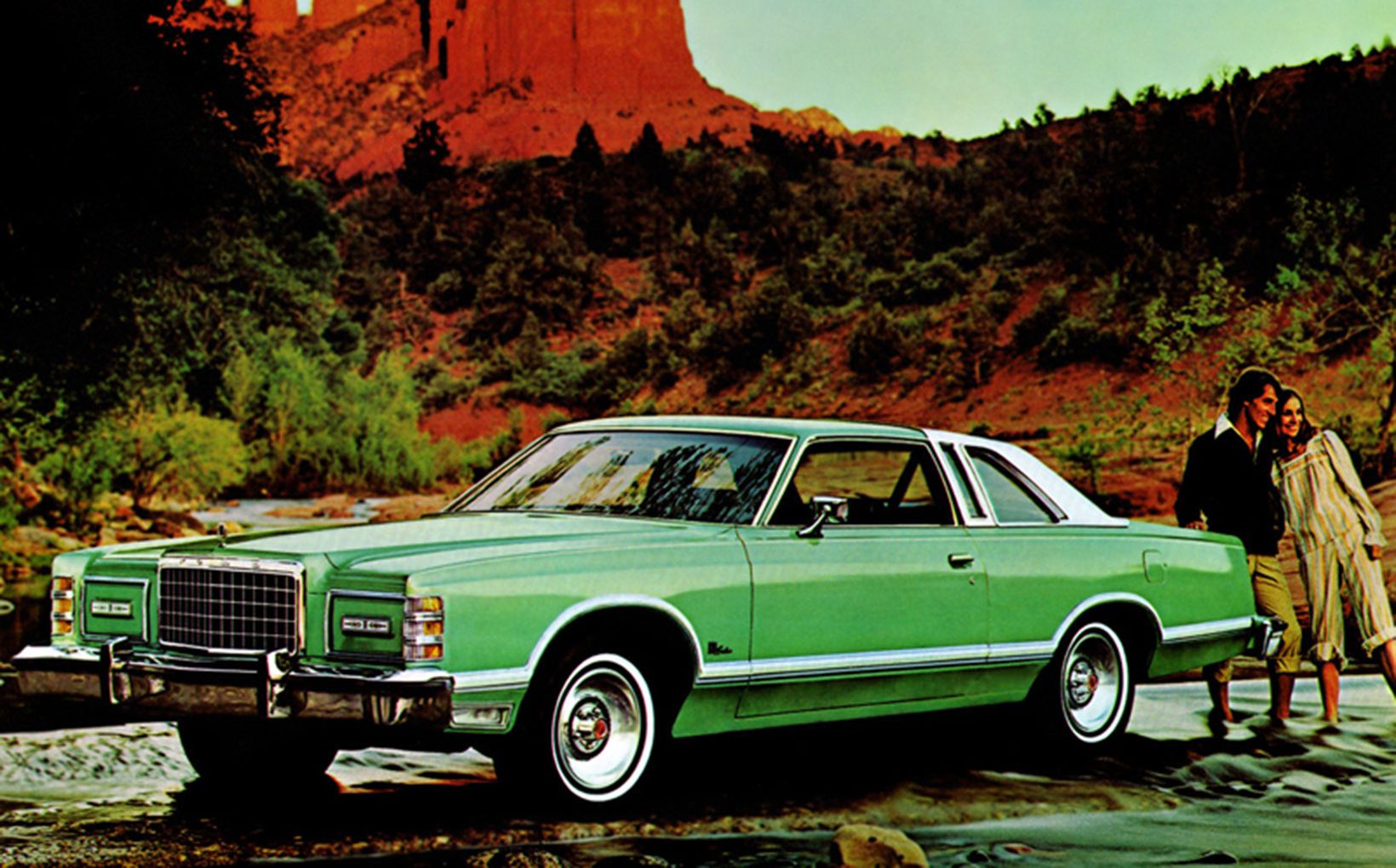 Ford’s 1971 and 1977 LTD are as big as all outdoors. A super soft suspension and power assistance made driving these land yachts a simple exercise, as long as you did not want to go too quickly around a corner. Petrol consumption was epic.

It all came to an abrupt halt because of rapidly increasing oil and petrol prices caused by the Middle East oil crisis. Detroit rushed to downsize its cars, stripping them of weight, length and power. The 1979 Ford LTD, and its twin, the Mercury Maquis (and Grand Marquis) were cars designed in that time of crisis.

Although the LTD and Mercury were not as flabby as their predecessors, they were still large cars and rode on a 114.4 inch/2906mm wheelbase. That made them approximately the size of our Holden Statesman and Ford Fairlane, and, ironically, the 1949 American Ford.

The LTD and Mercury came in two and four door sedans and a wagon. Their angular shapes were identifiably American and retained all the visual cues of larger cars of yesteryear, especially Lincolns. 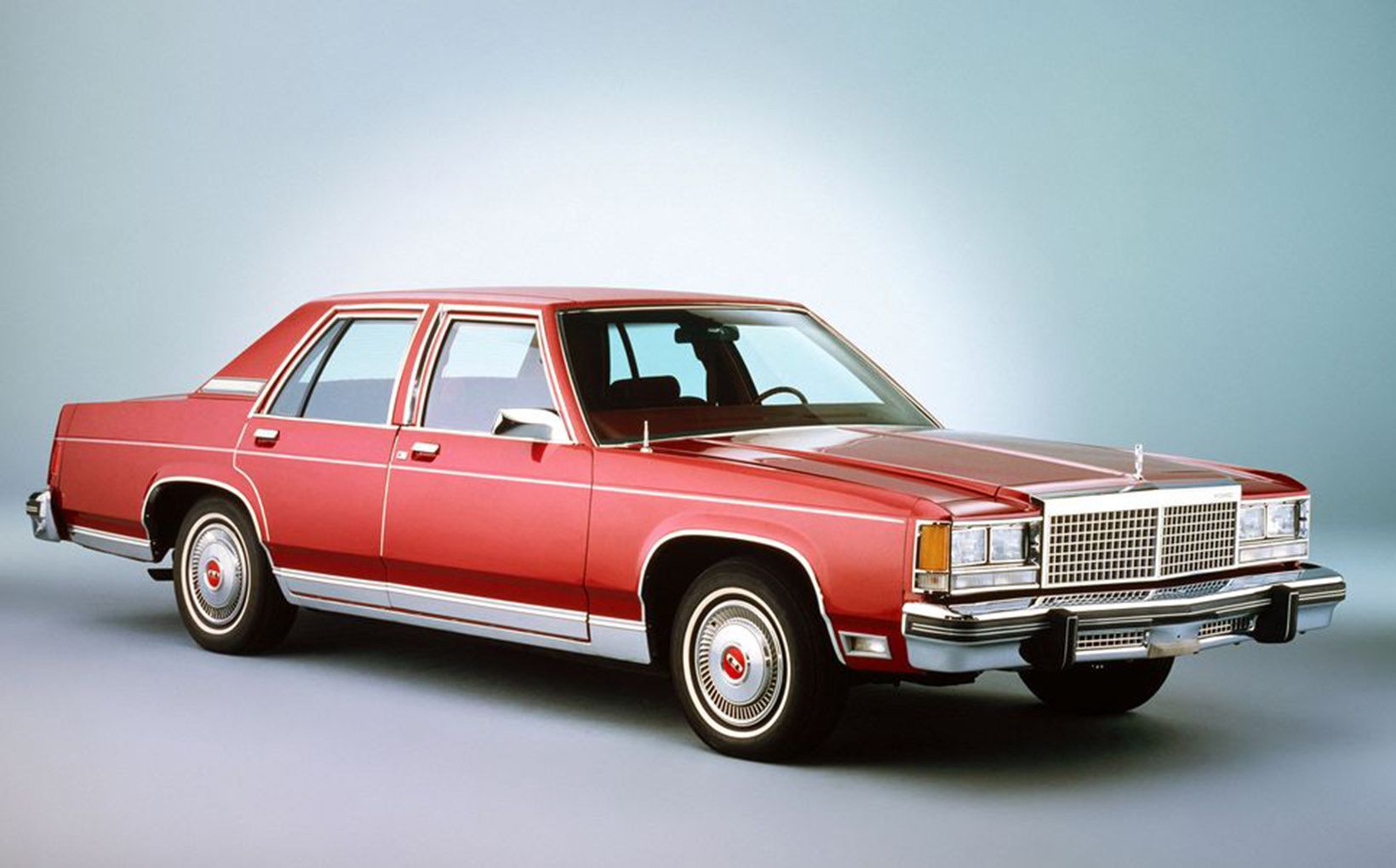 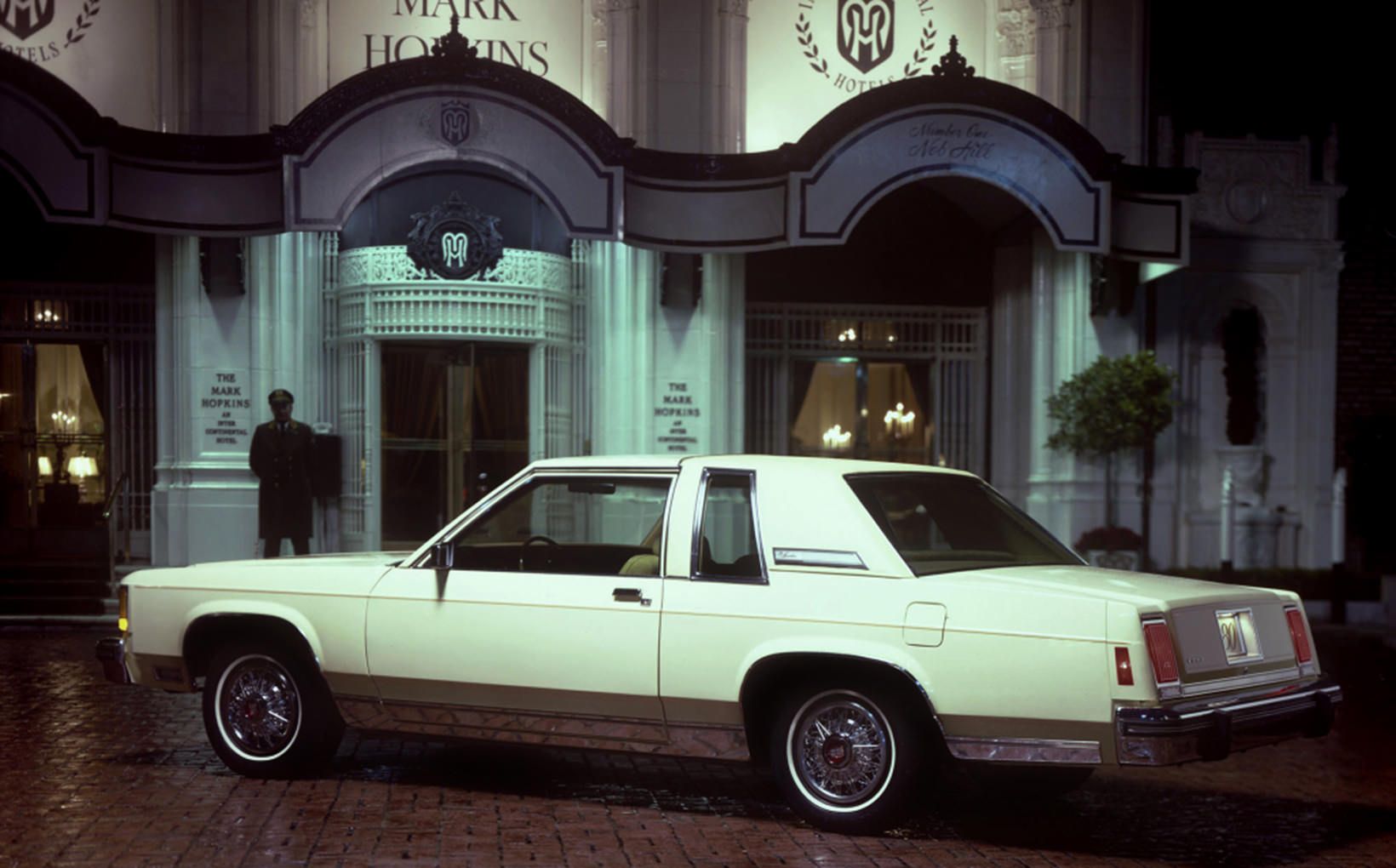 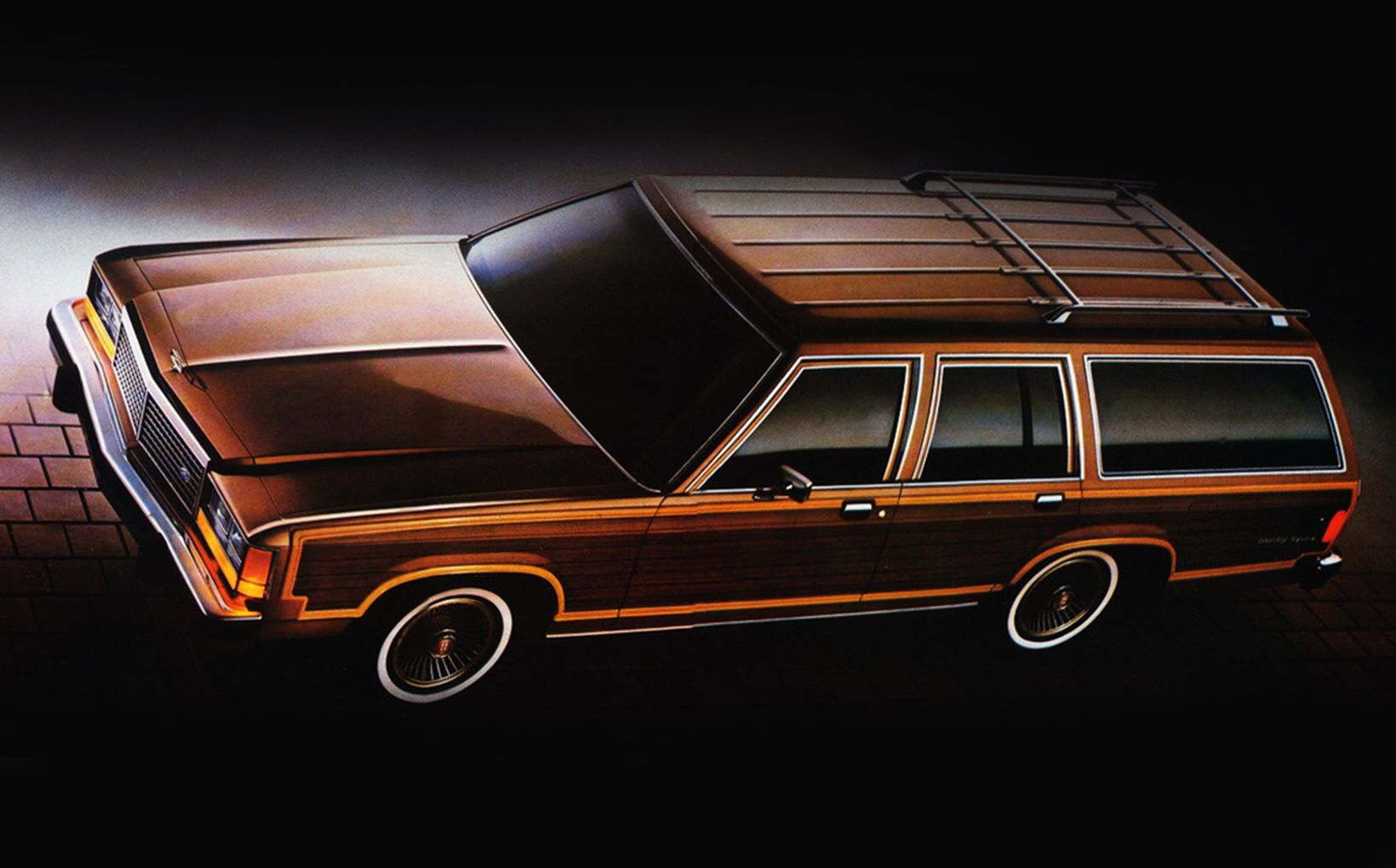 The 1979 Ford was smaller than its predecessors, but still big by most measures. The two door sedan found 42,300 customers.

From 1980 onwards the Panther chassis was also used under various Lincolns, including the Town Car, so beloved by those who inhabit the red carpet and affluent retired folk who always bought American cars and lived in Florida and other sun-belt locations.

An American mate once quipped about his Florida community “More Town Cars than golf carts here, and that’s sayin’ something!”

One year after the LTD’s release Ford resurrected the Crown Victoria name, and the “crown of chrome”, to describe a top-of-the-range model. 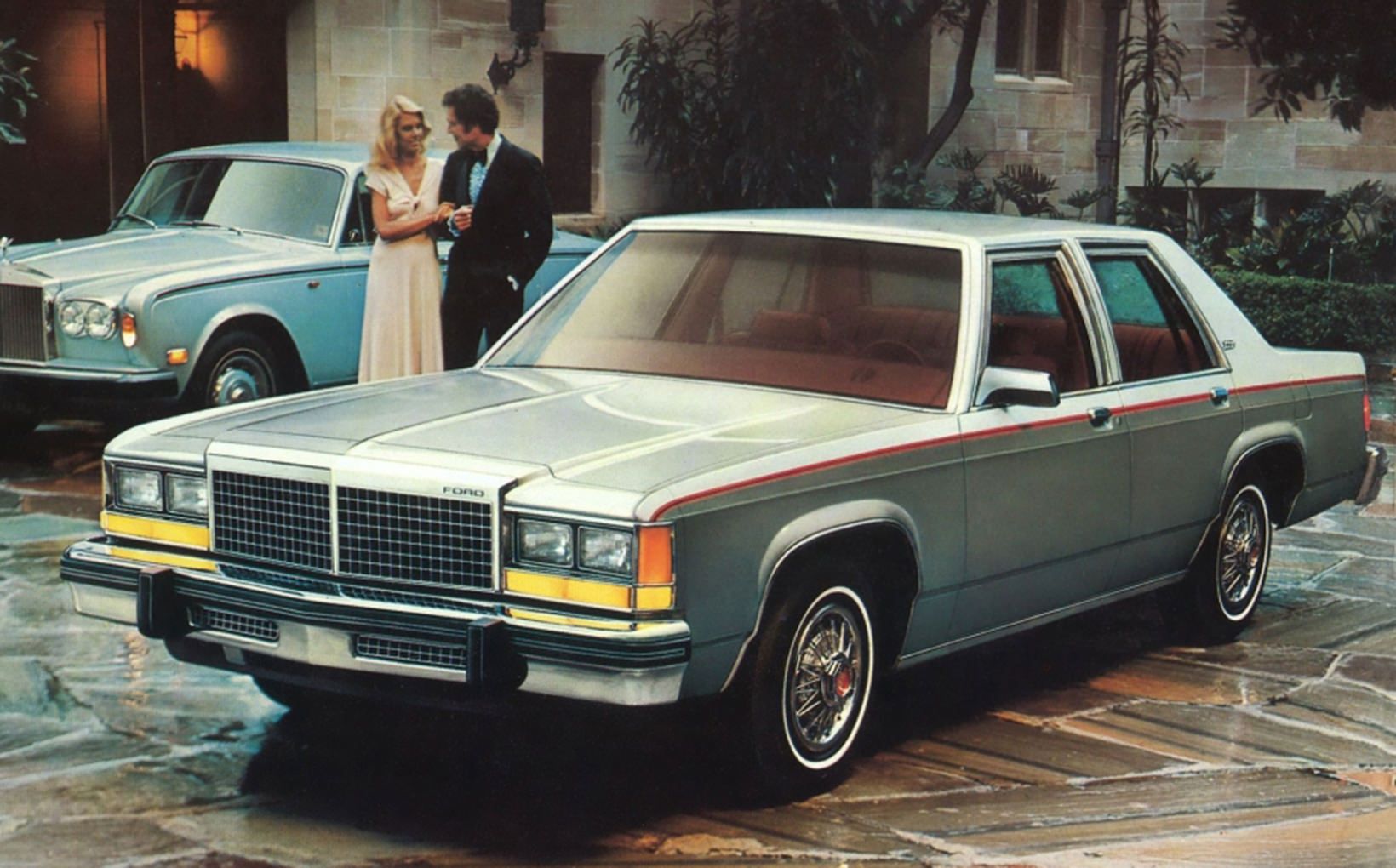 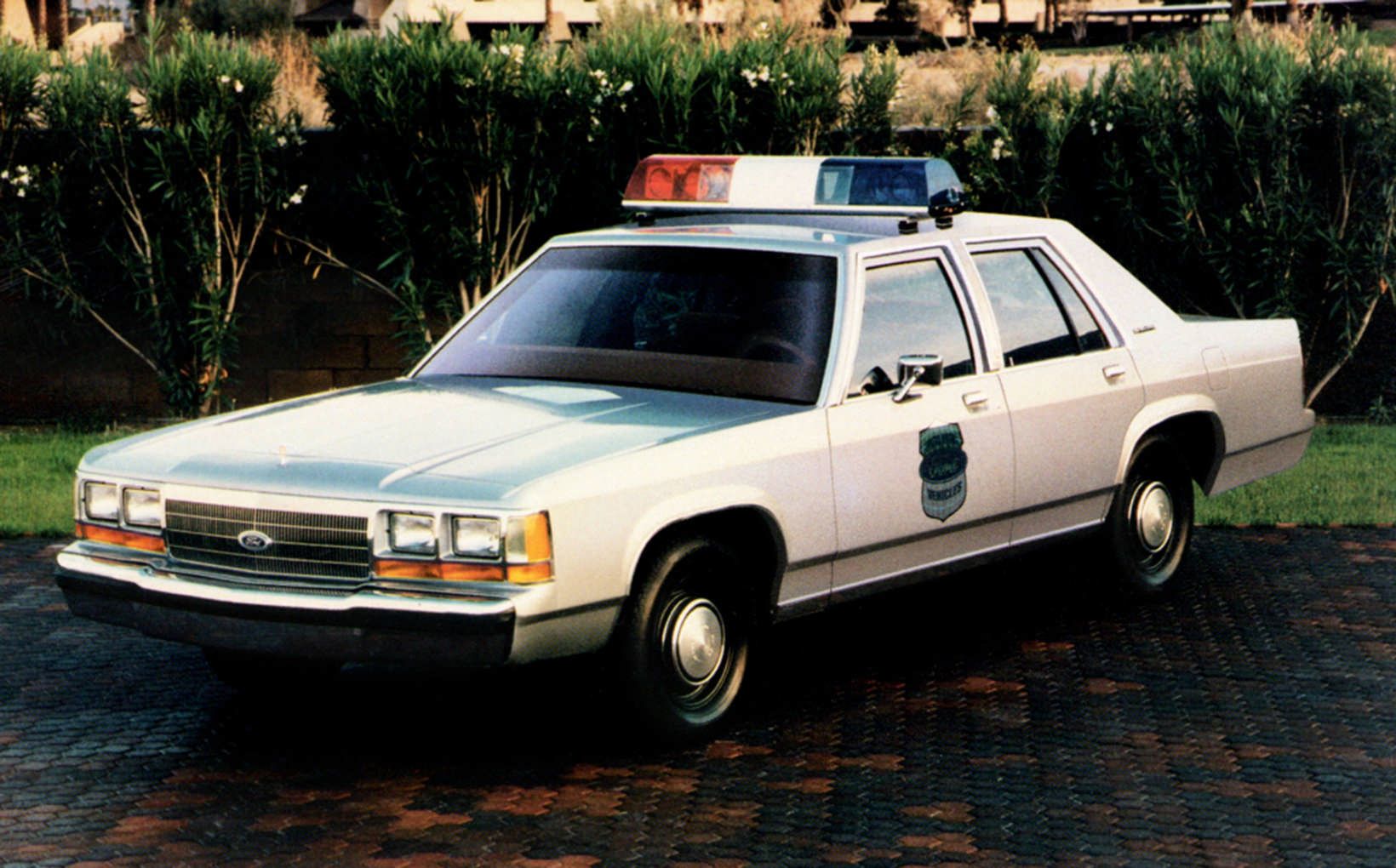 Ford was never shy in comparing its large cars to Rolls-Royce. This Crown Victoria image, which was used in the 1980 brochure, reprises Ford’s 1965 claim that the LTD was quieter than a Rolls Royce. The brochure was quickly revised and this photo deleted. Meanwhile, marketing to law enforcement officials focused on reliability, robustness and speed.

The Panther cars were a very simple device. A V8 was standard, so too a column shift automatic transmission and a bench front seat. Steering was via an old fashioned recirculating ball system. Rear suspension comprised coils linked to a live rear axle. The rear leg room was generous and the boot huge.

The full frame chassis gave them truck like strength. Heavy hits to the fenders didn’t impact the car’s structure. Panels were easy to replace. Servicing the V8 was a straightforward exercise.

All of this simplicity and space made the Crown Vic sedans especially attractive to Police, taxi companies, car rental agencies and those buyers who yearned for a car that reminded them of America in the 1950s and 1960s. 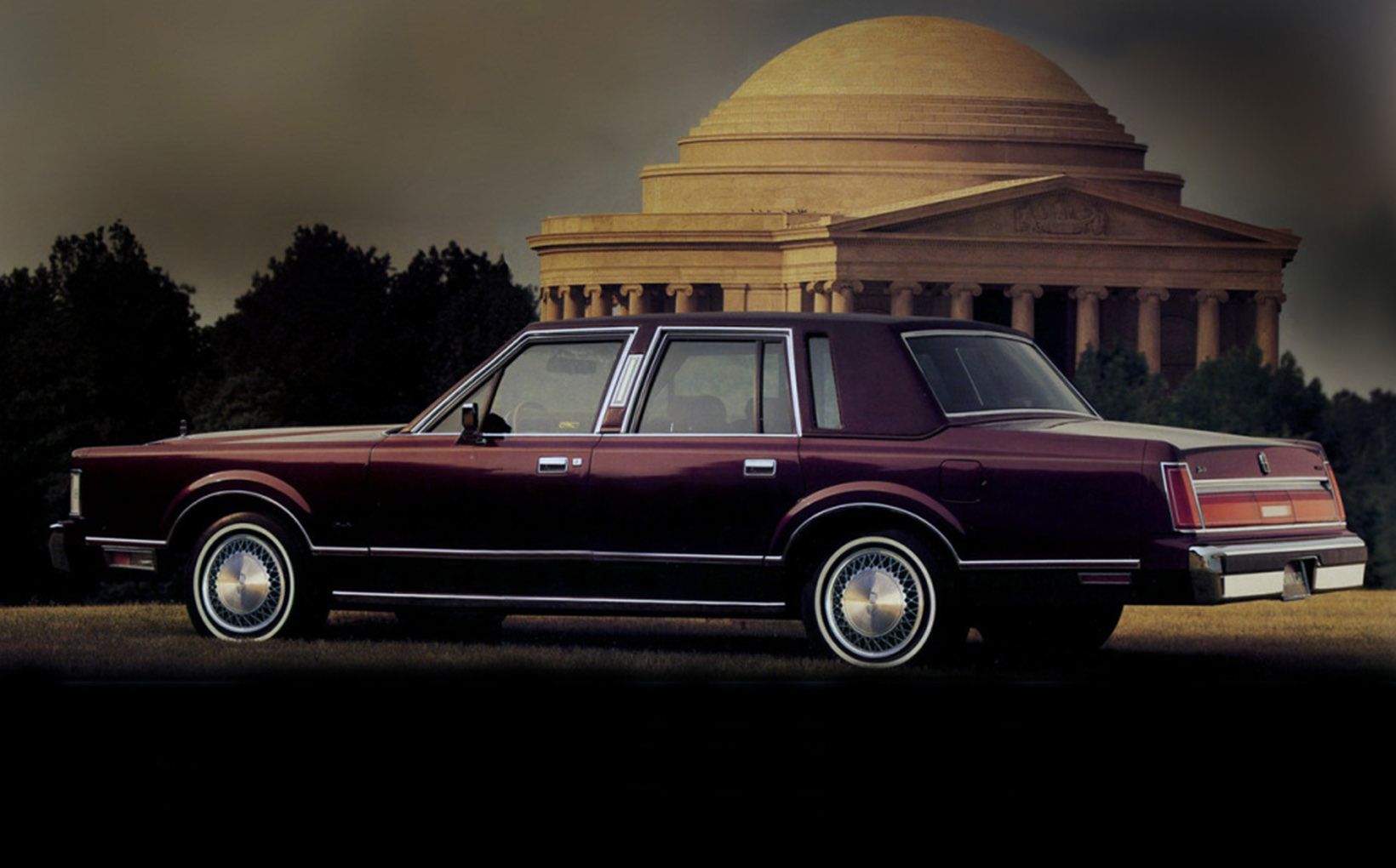 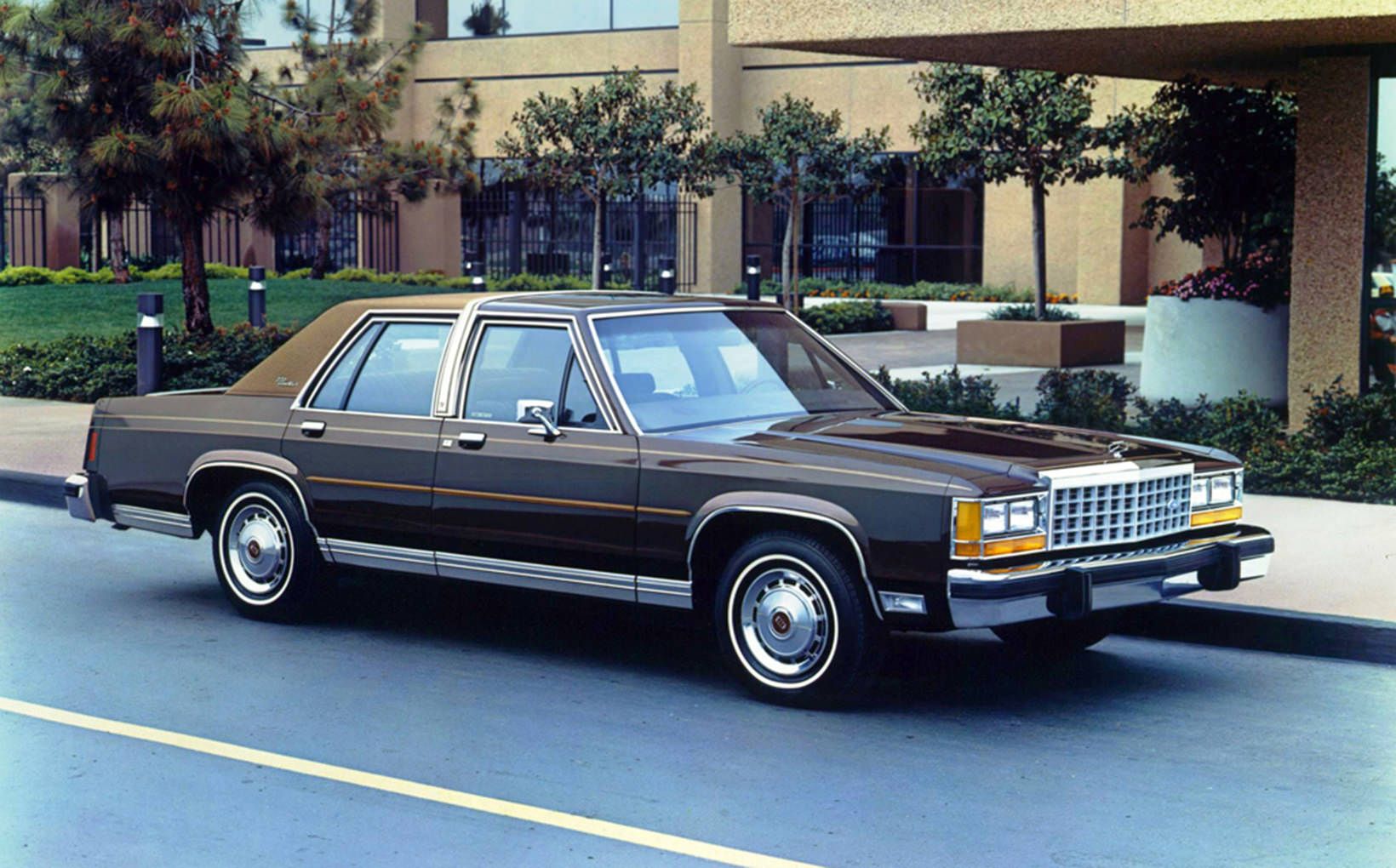 The 1980 Lincoln Town Car is a graduate of the straight lines school of car styling. The Crown Victoria name was resurrected for the top of the range LTD in 1980, complete with a “crown of chrome” roof band.

And lest you scoff at the underlying premise of the packaging and target market, be mindful that during their first year on the market, these cars found more than 340,000 buyers. Even in 2000 Ford, Mercury and Lincoln sold 250,000 units. These are impressive numbers.

By 1983, the LTD and Marquis name plates had been shifted to smaller Fords and the Crown Vic and Grand Marquis badges were firmly in place on the big cars.

In 1990 The Town Car had its sharp edges removed in a major restyle by the late Gale Halderman. Gale was also instrumental in the design of the first Falcon and Mustang. 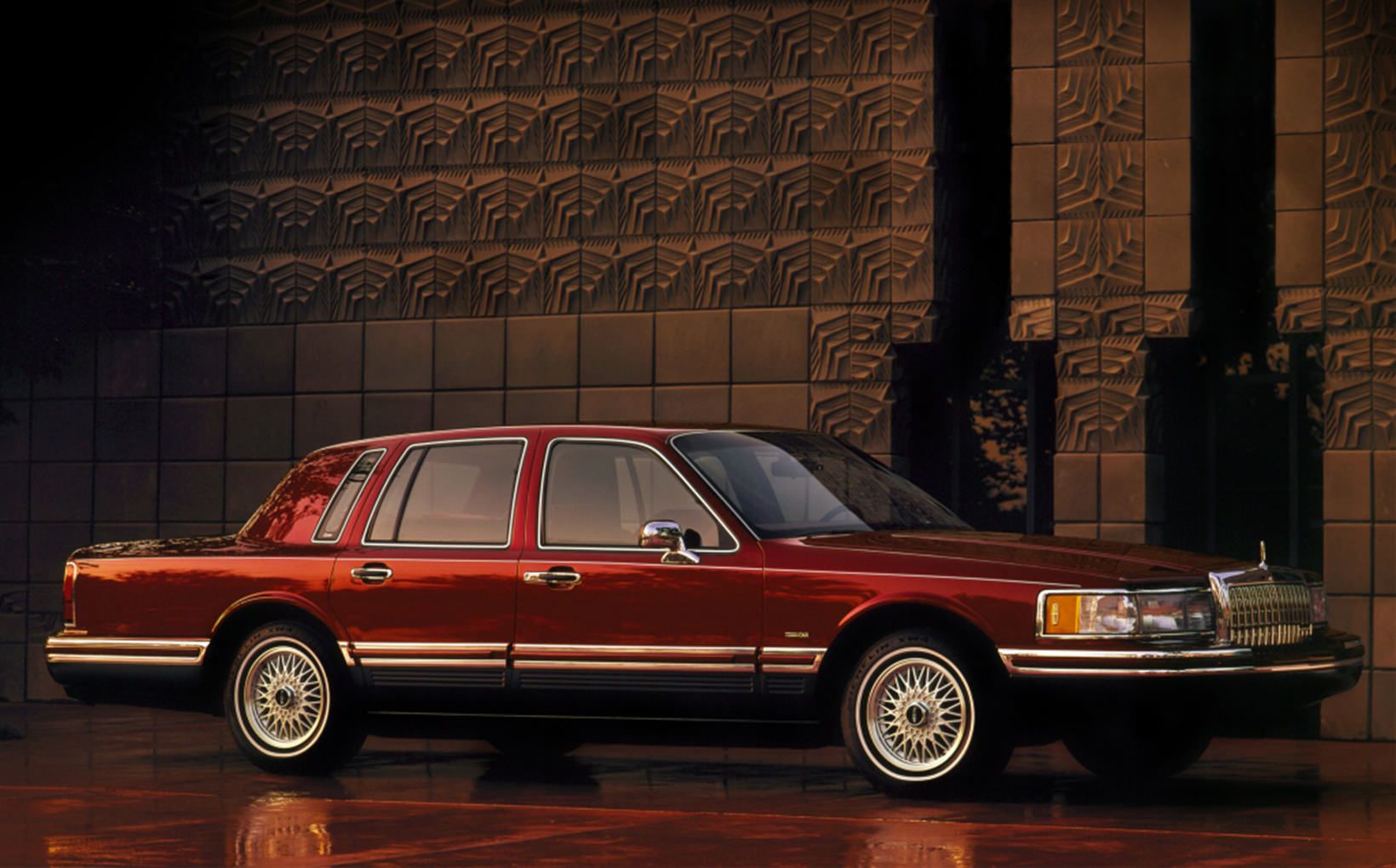 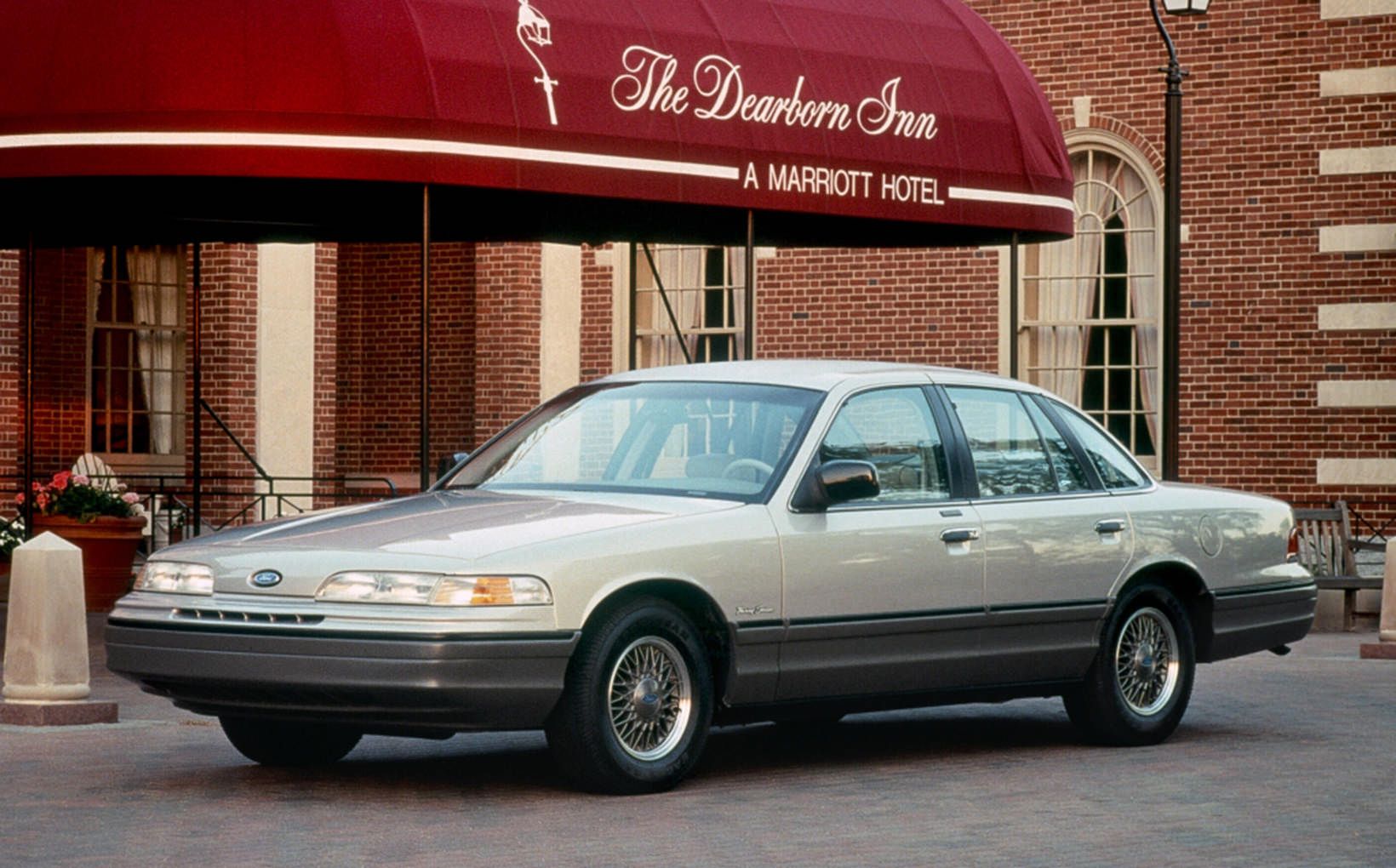 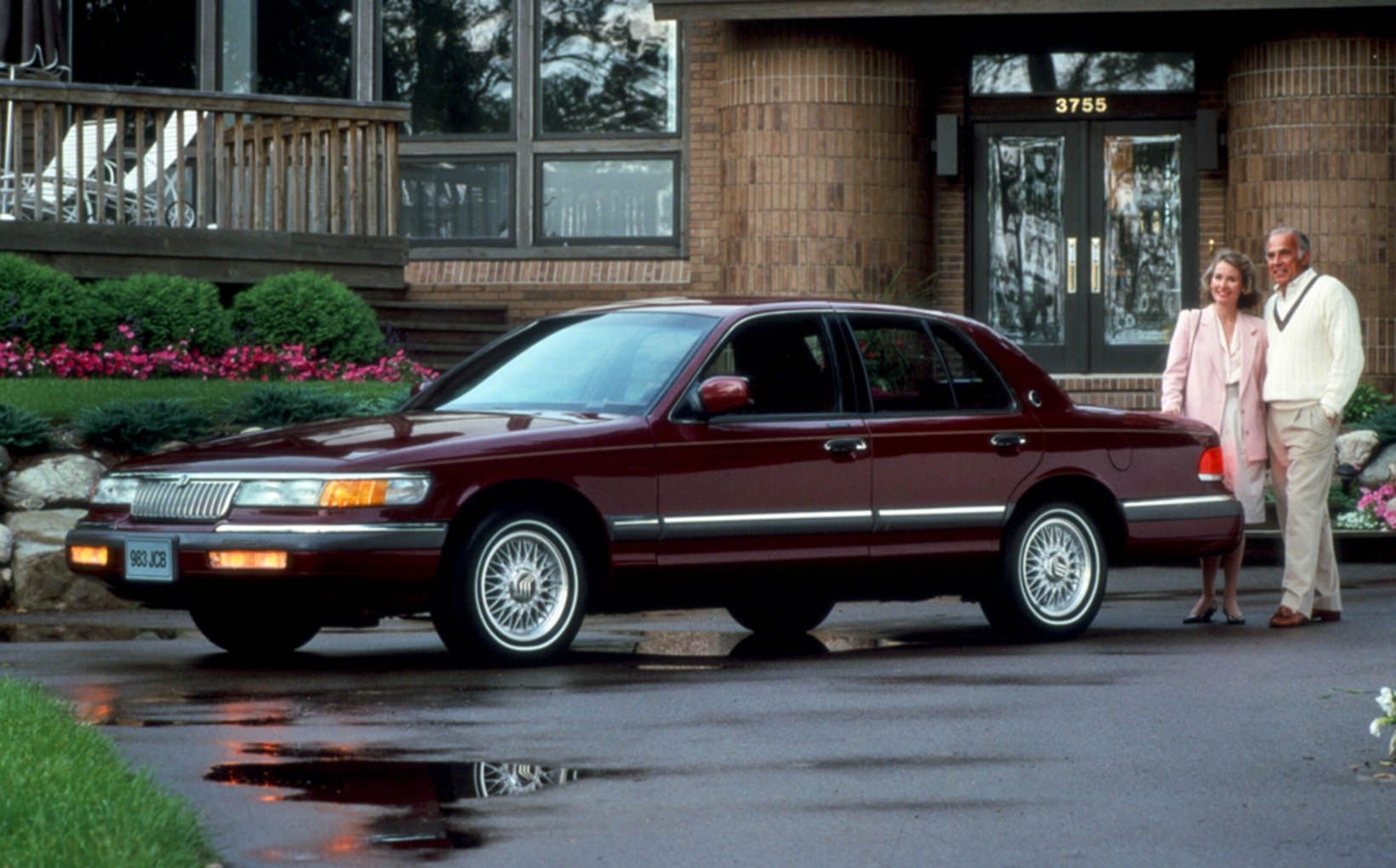 The Lincoln Town Car was the first Panther chassis variant to undergo a restyle in 1990. Two years later the Crown Vic and Mercury were given the aero design treatment.

The 1992 Crown Vic and Mercury emerged from the styling studios with a smooth aero styling. The Ford went to a six window shape while the Mercury featured more conservative notchback design. The wagon was not a part of the new line-up. The two door had already been delisted in 1987.

For 1998 and beyond, the Crown Vic adopted the Mercury body shape and the Town Car was completely restyled.

In 2003 the technologically challenged recirculating ball steering was replaced by a rack and pinion arrangement.

A decision was made that from 2008 onwards the Crown Vic would be restricted to fleet buyers. The Grand Marquis and Town Car remained available to the general public. 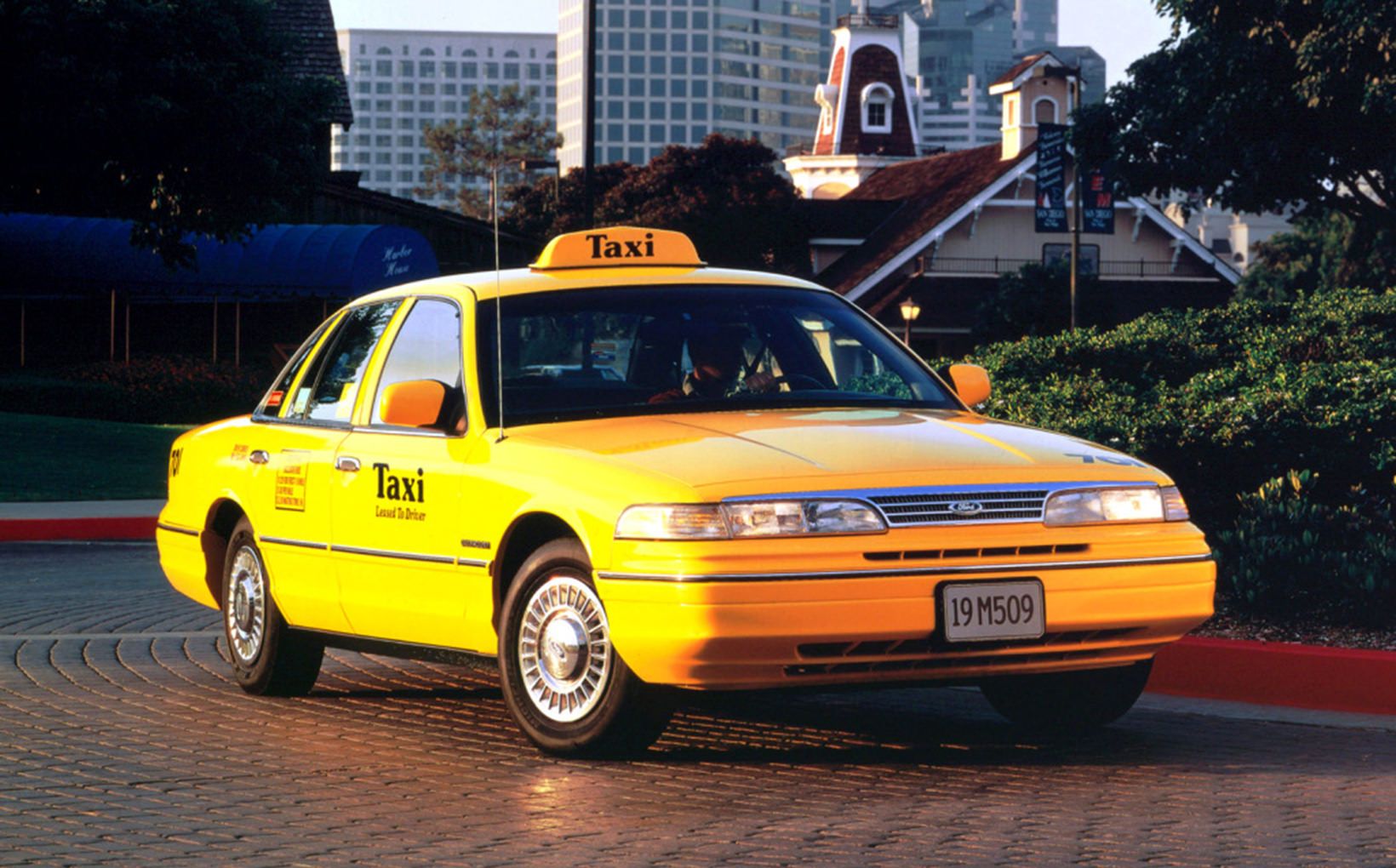 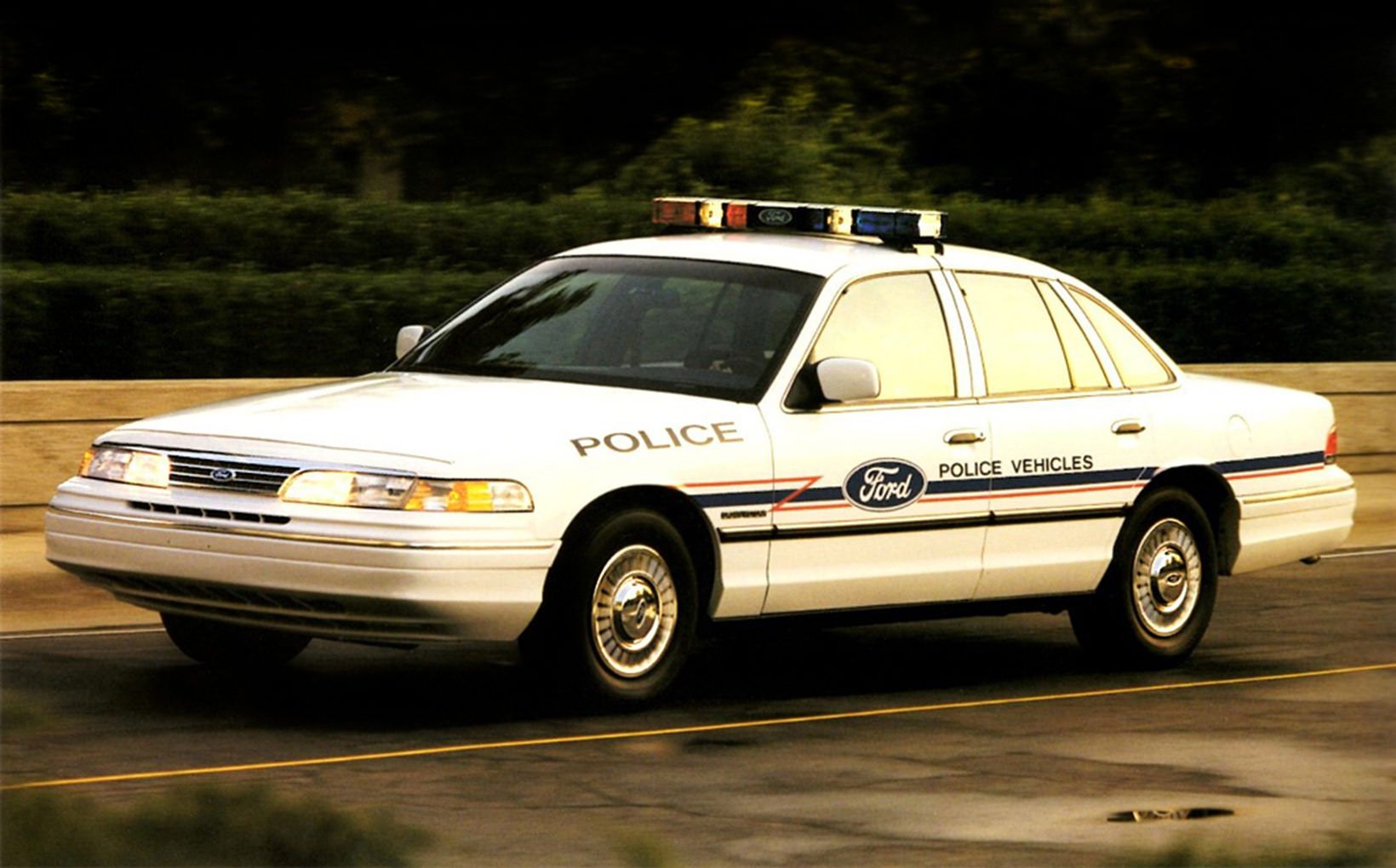 The final year was 2011. The sales numbers told the story. The Crown Vic could manage only 34,000 sales. The Grand Marquis achieved even less, with just 28,500. Ford decided that the cost of bringing the chassis and styling up to 21st century standards, especially legislated stability control, and replacing the worn, old tooling, was not worth the time, expense and effort for the ever-shrinking demand.

The last Grand Marquis was built on 4th January, 2011. In August the Lincoln Town Car met its end. On 15th September the final Crown Vic rolled off the production line, and with that the Panther became the longest serving chassis in North American automotive history.

When Ford’s statisticians added up the three decades of Crown Vic, Mercury and Town Car production, the outcome was a staggering 9.6 million units. Put another way, the Panther cars generated approximately $US300 billions of top line revenue for Ford. Yes, $US300 billon. 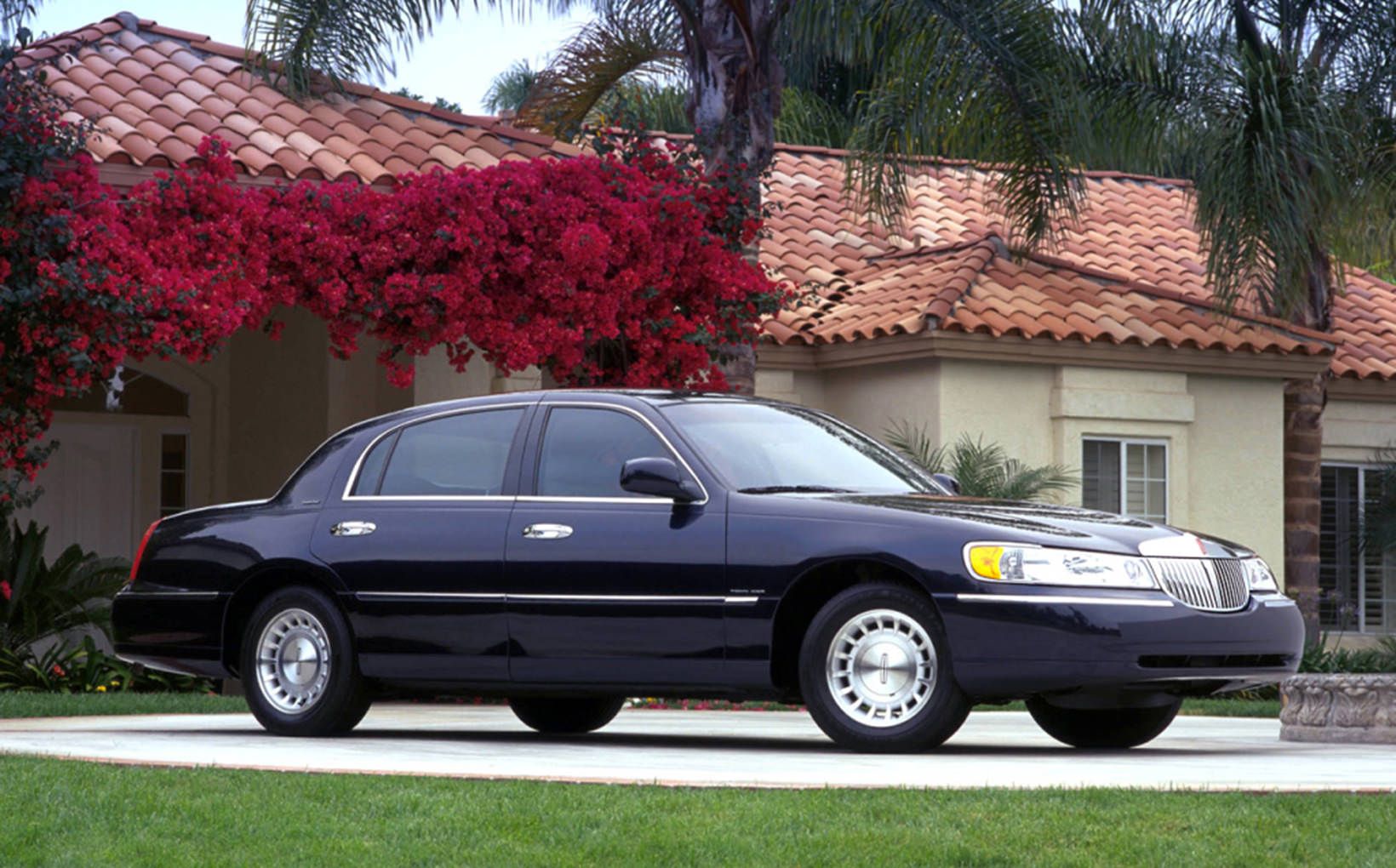 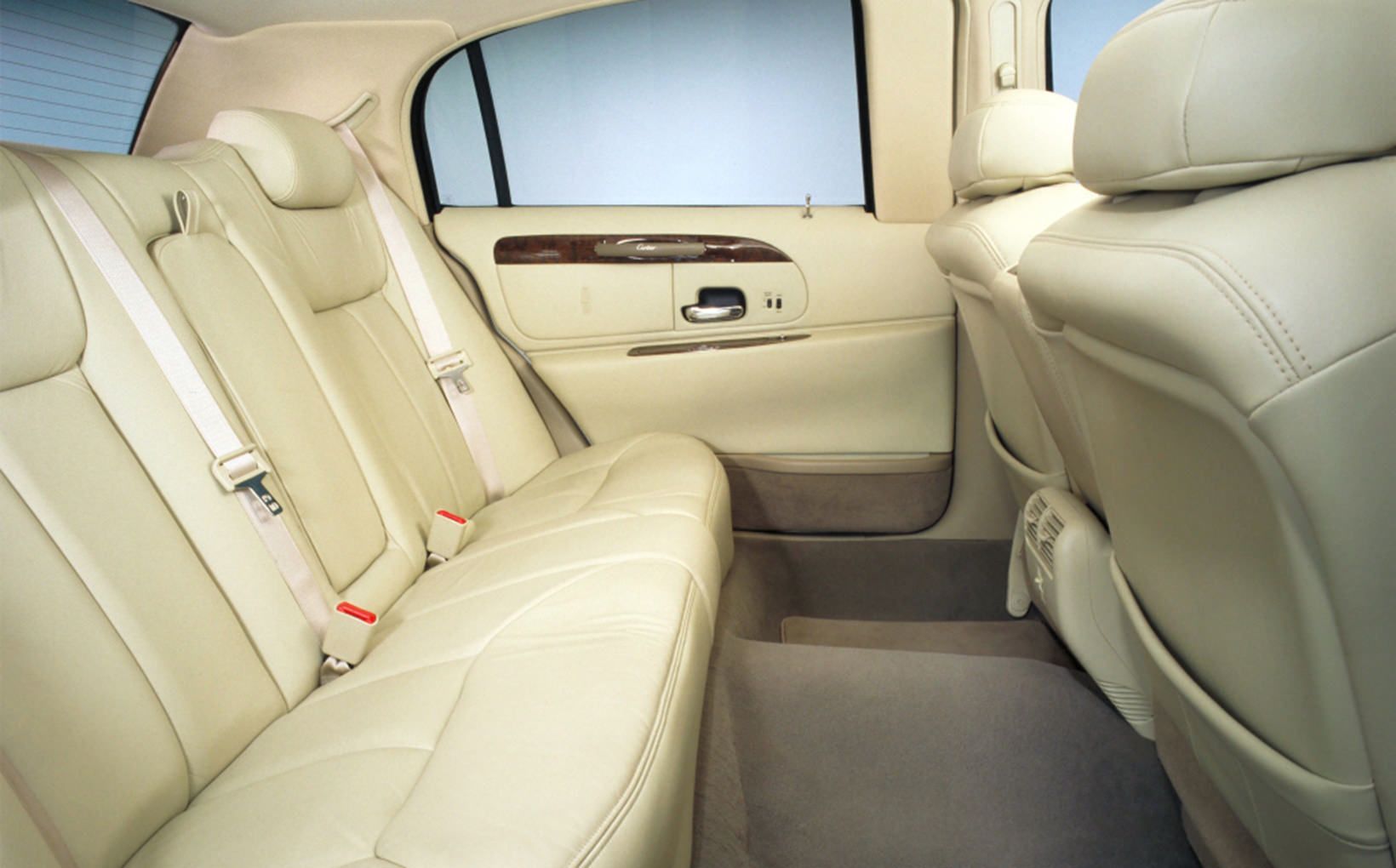 The Town Car was again subject to a re-design in 1998. Its vast interior made it the favourite of the limo hire and rental companies.

The Crown Vic itself is reputed to have been Ford’s most profitable vehicle ever, simply because the bean counters refused to allow any real money to be spent on it.

So popular with Police departments was the “Interceptor” (coded P71) version of the Crown Vic that when news of its demise became known, law enforcement agencies in the USA and Canada began stockpiling them. 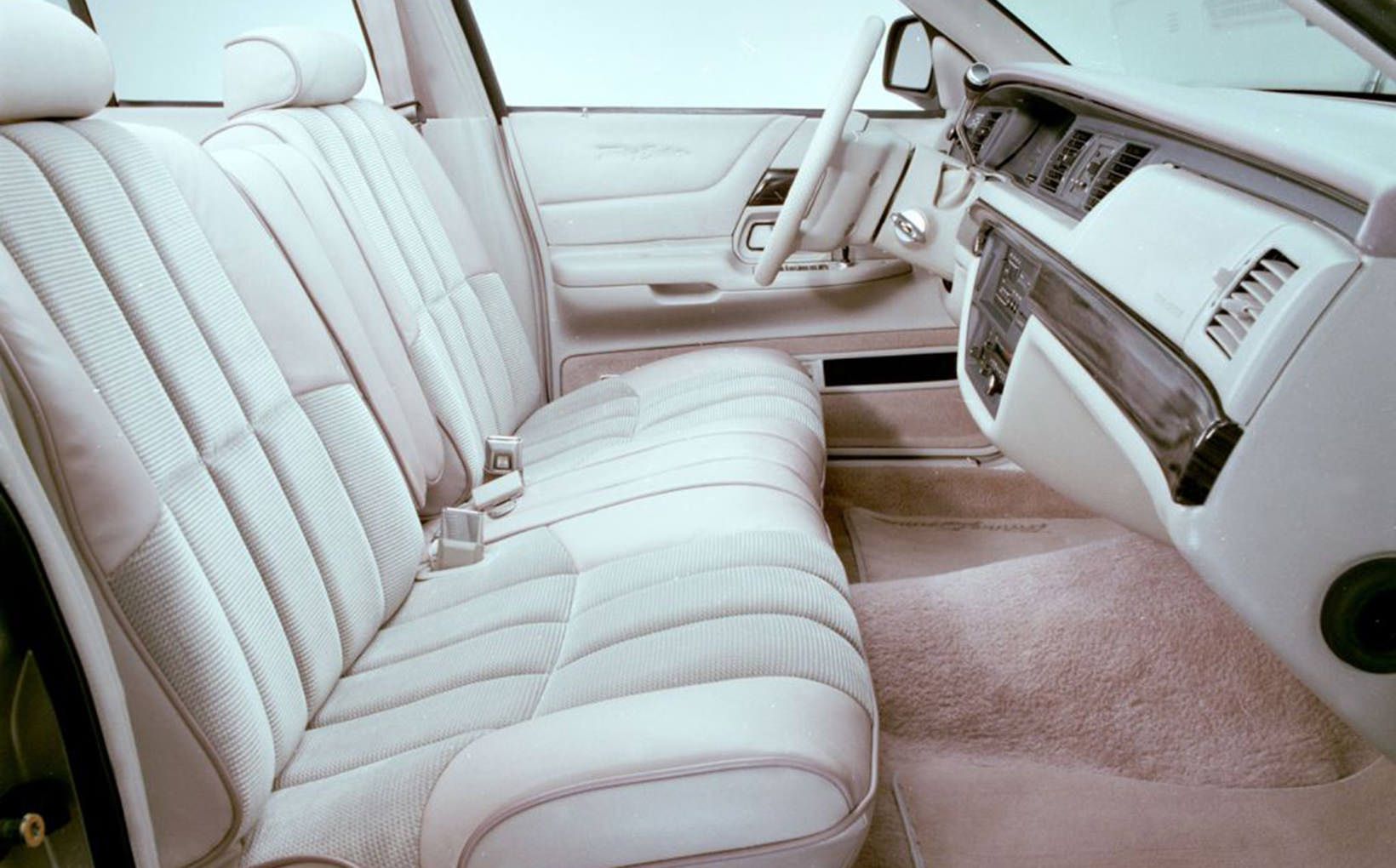 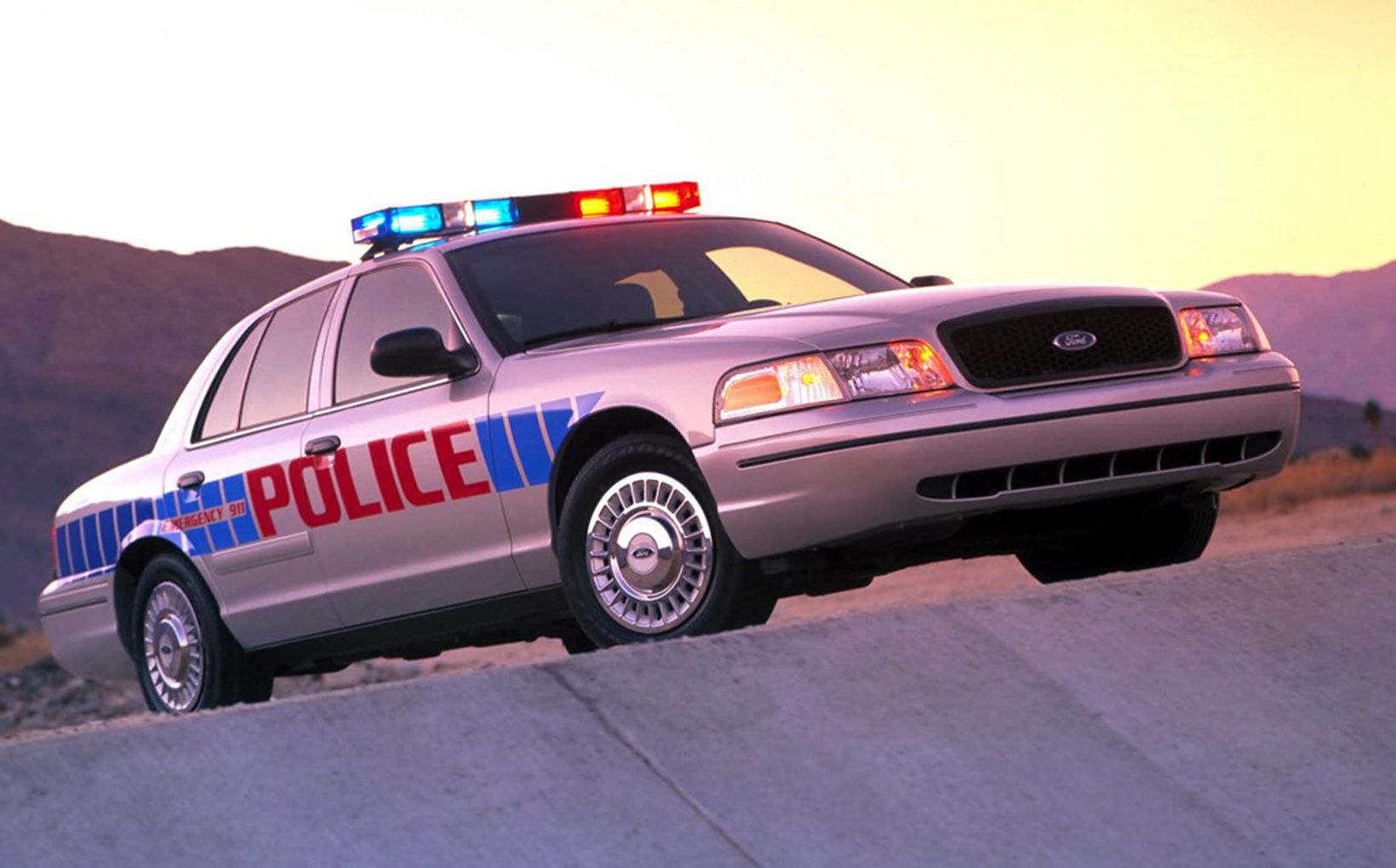 The interior of the Crown Vic accommodates six passengers, thanks to a split bench front seat and column shift. Crown Vics continue to project a law enforcement message even though they have not been in production for almost a decade.

As late as 2019 some P71s were still in service. Its stronger, kerb climbing suspension, higher ride height, huge boot and ample interior room was much appreciated by the cops.

Usually it takes decades for a car to become a classic. Not so the Crown Vic, Grand Marquis and Town Car. All manner of folk are sourcing used examples and either customising them, hot rodding them or simply enjoying the 1950s/60s ride. 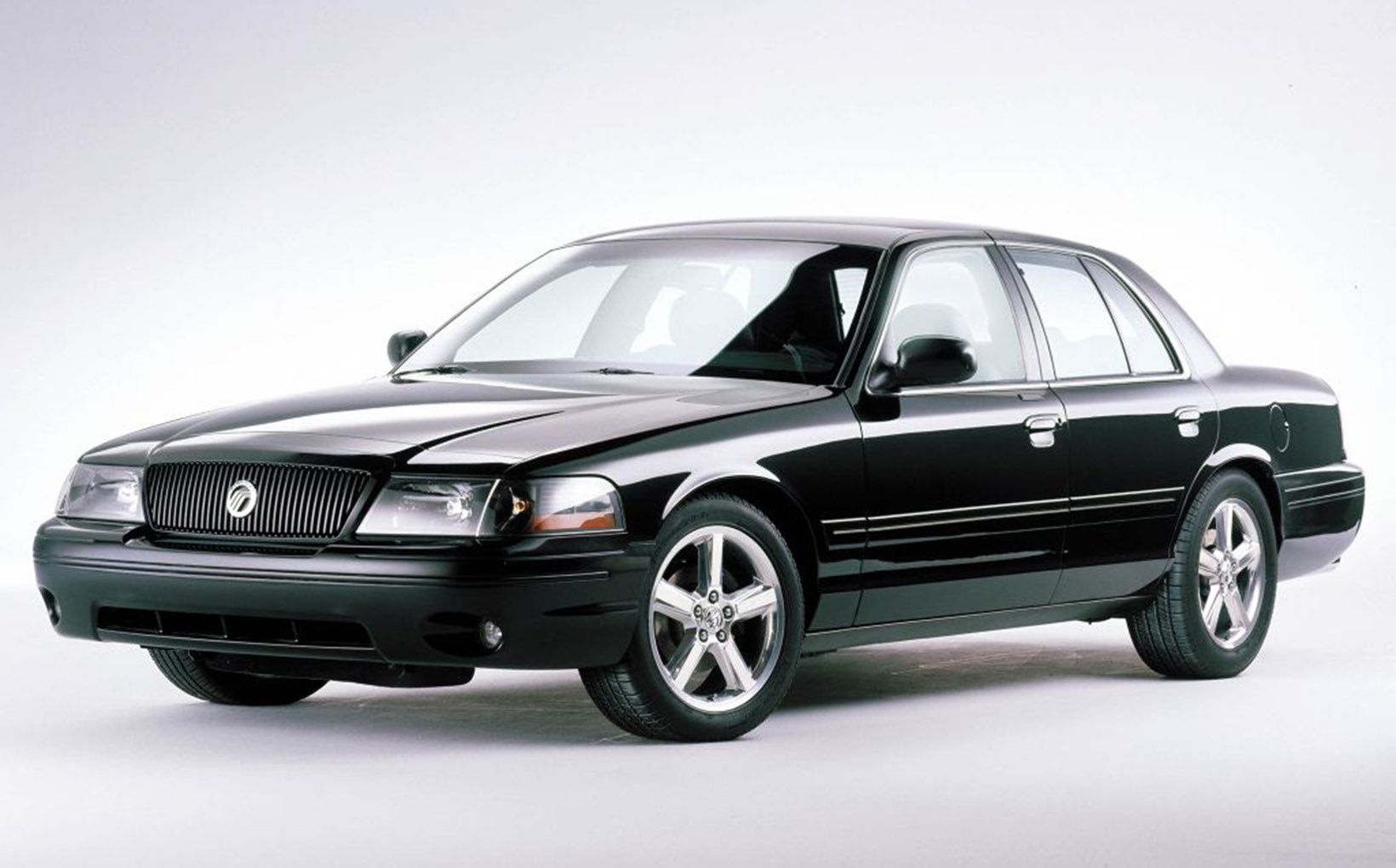 The 2003-04 Mercury Marauder is a P71 police Interceptor in disguise. Carrying the storied name of the mid-sixties muscle car, the Marauder is arguably the most collectible of the Panther cars.

I’ve driven many rental Crown Vics, Grand Marquis and Lincoln Town Cars in the past two decades. My final adventure with one was a Crown Vic from Hertz, in Los Angeles in late 2011. I reserved it specifically, knowing it might be the last time I ever was able to drive one.

The Crown Vic did not let us down. The big silver-grey car glided through the streets of LaLaLand with a quiet and relaxed efficiency. Its supple suspension and robust chassis absorbed the many bumps and lumps of LA’s freeways and byways as if they did not exist.

The column shifter fell nicely to hand. The big wide bucket front seats, which joined to form a bench seat, cushioned our nether regions. The vast boot swallowed our luggage with room to spare.

The V8 effortlessly ensured we kept pace with the freeway traffic and had ample accelerative capacity for quick lane changes. The over-assisted power steering was a joy to use, allowing one finger steering through the curves of Mulholland Drive. 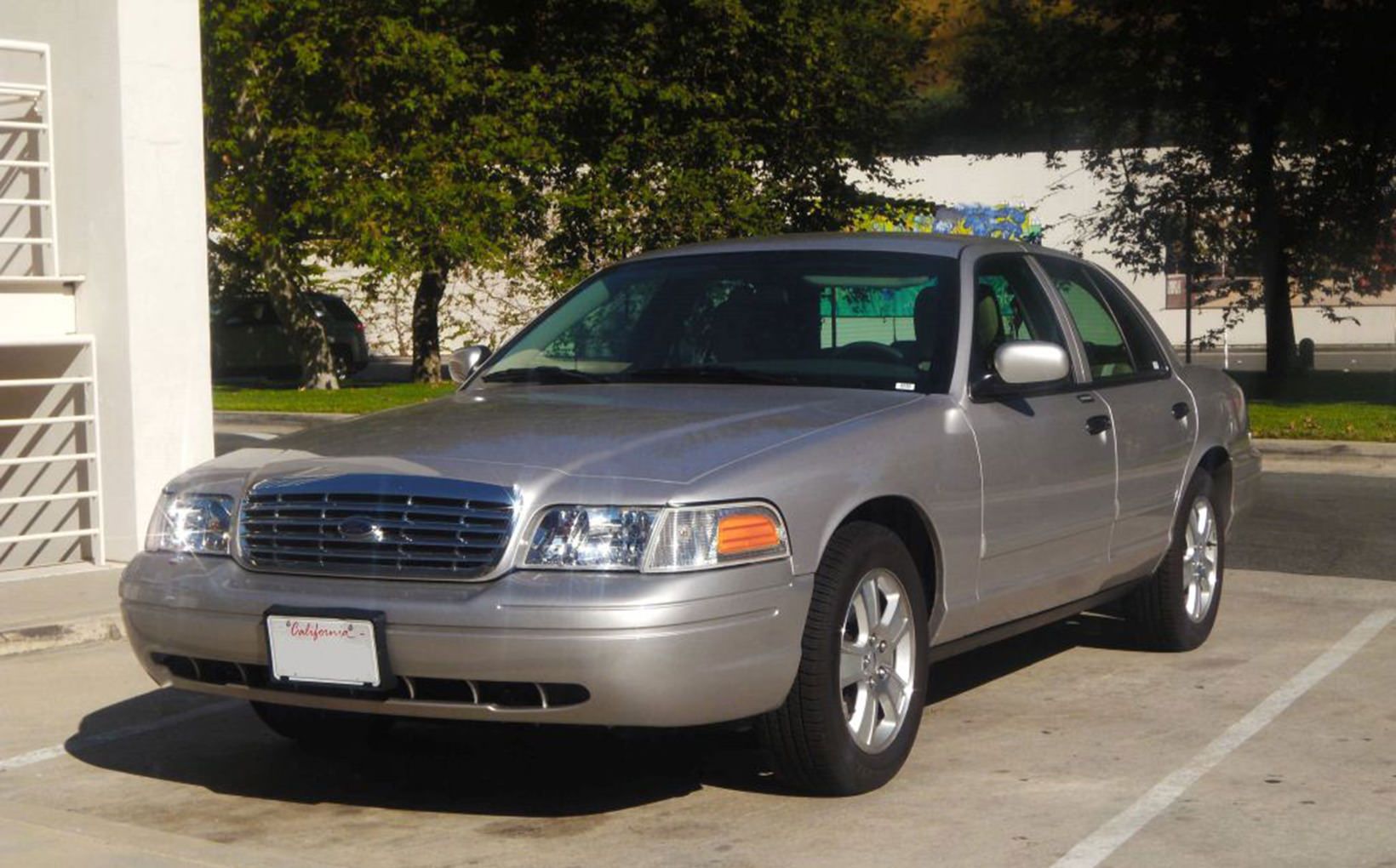 The last Crown Vic I drove, seen here parked at The Getty art gallery and museum in Los Angeles, USA.

If being the last full frame rear wheel drive American sedan was not enough to bestow icon status, then the fact that the Crown Vic, Grand Marquis and Town Car have appeared more than 6000 times in American TV shows and movies puts it beyond reach. And if that’s not enough, “Crown Vic” was the title of a 2019 movie, which records the highs and lows of two cops over one night as they fight crime in LA.

Indeed, the Crown Vic has become an all pervasive visual short hand for POLICE.

Such is the cultural power of that visual association, that when I parked that last Crown Vic in the driveway of our Marina del Rey hotel, the valet parking attendant initially mistook me for a plain clothes detective. Only in America. 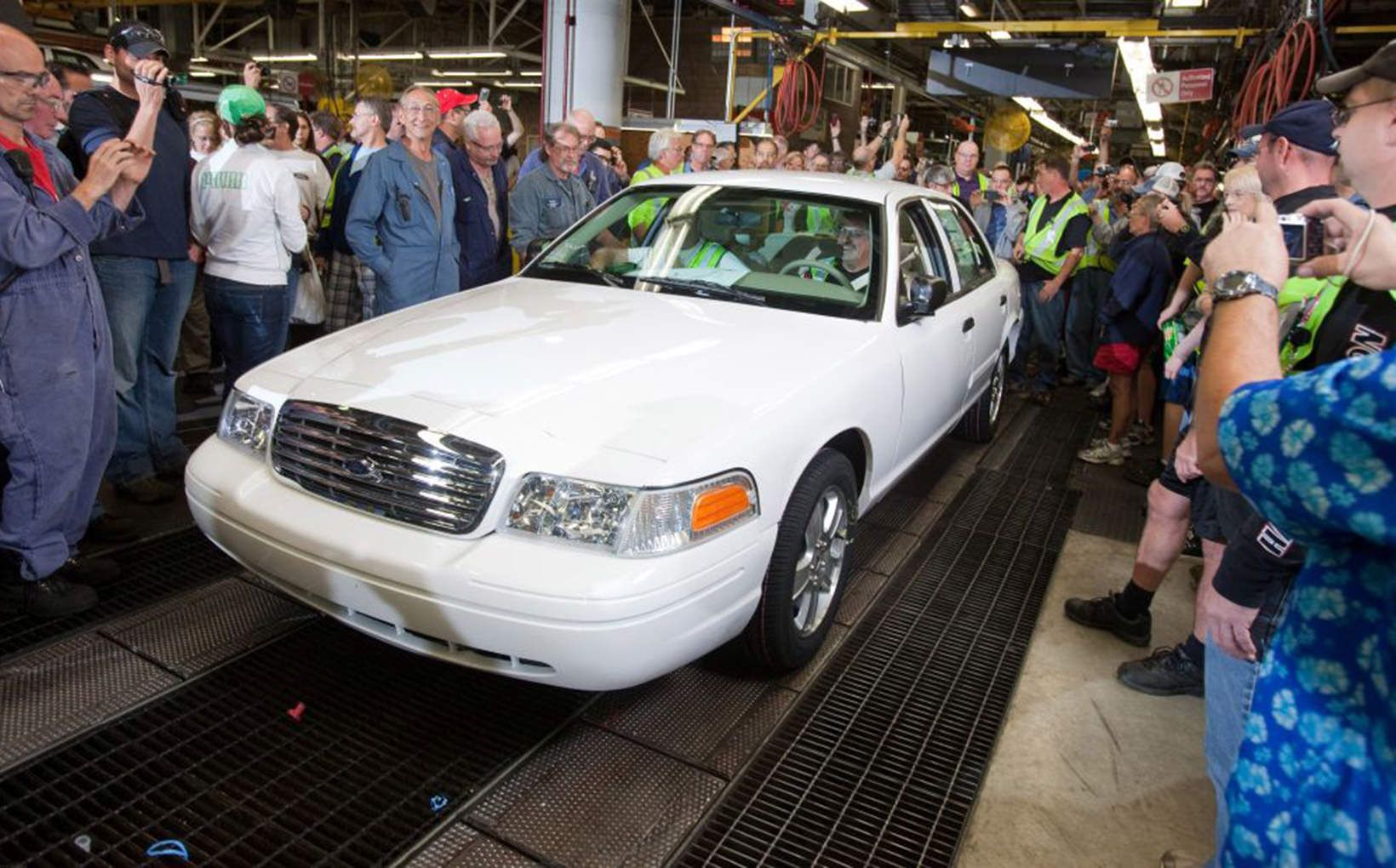 The final Crown Vic is driven off the end of the production line on 15th September, 2011. 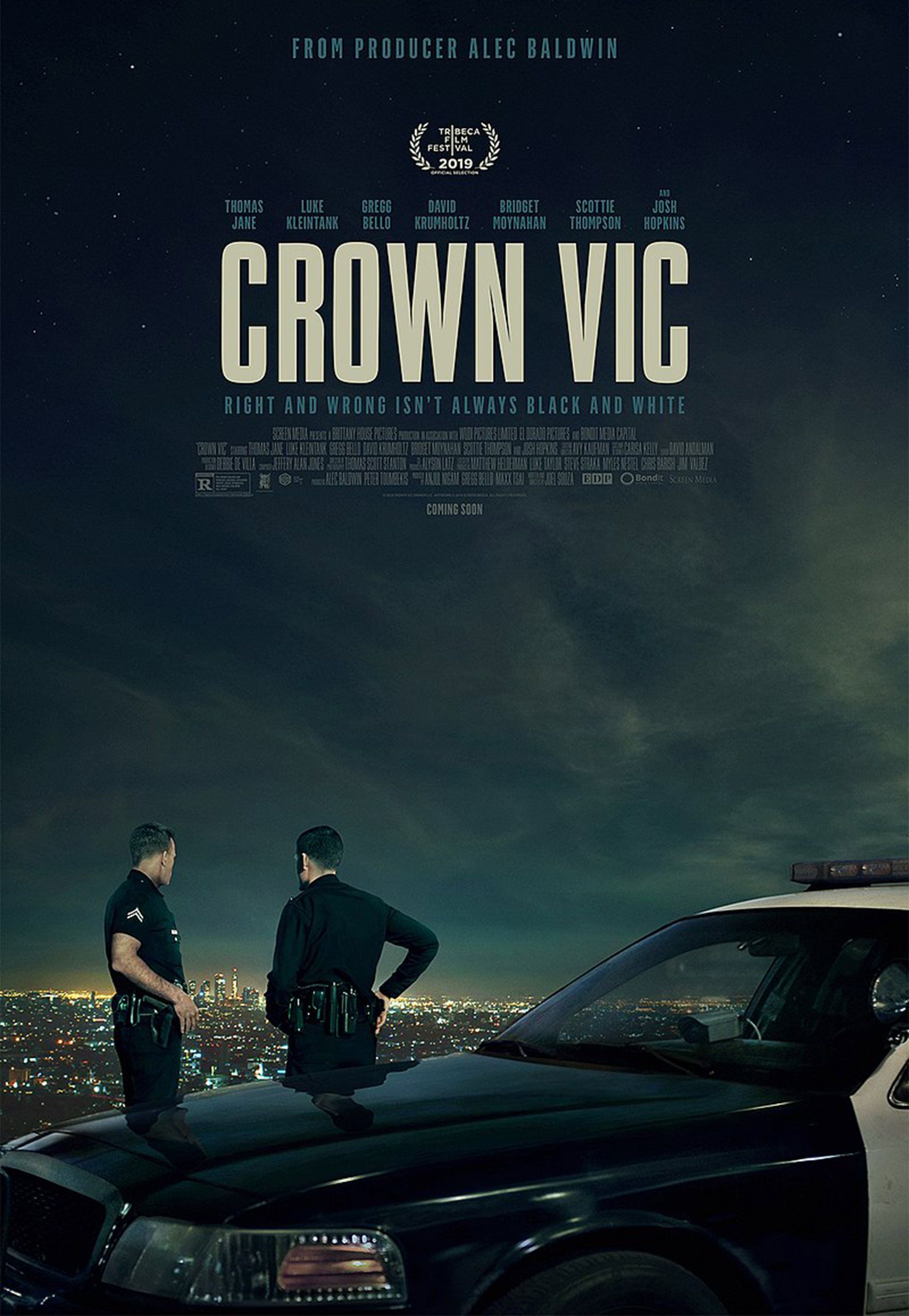