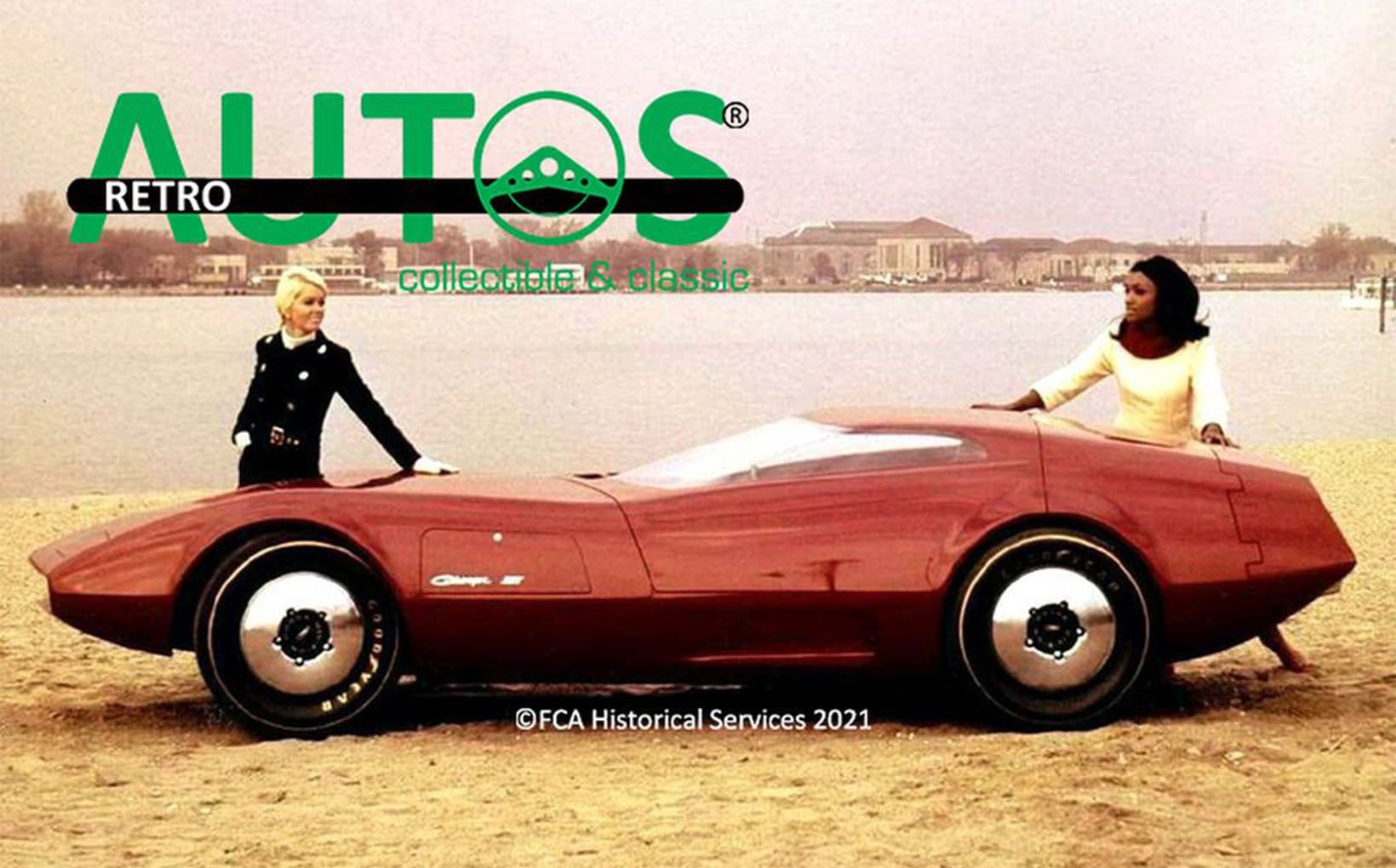 Unveiled with all of the usual corporate razzle dazzle, the 1964 Dodge Charger I, 1965 Charger II and 1968 Charger III are yet more examples of how quickly concept cars slip from view and are forgotten.

The first two were released at a time when Chrysler was emerging from a near death design and financial experience, caused by its mistakenly downsized and stylistically challenged 1962 range. The shrunken cars were based on a styling theme called the “S-Car”. Basically, S-Cars were larger versions of the 1960 Valiant, the company’s cheap economy car. 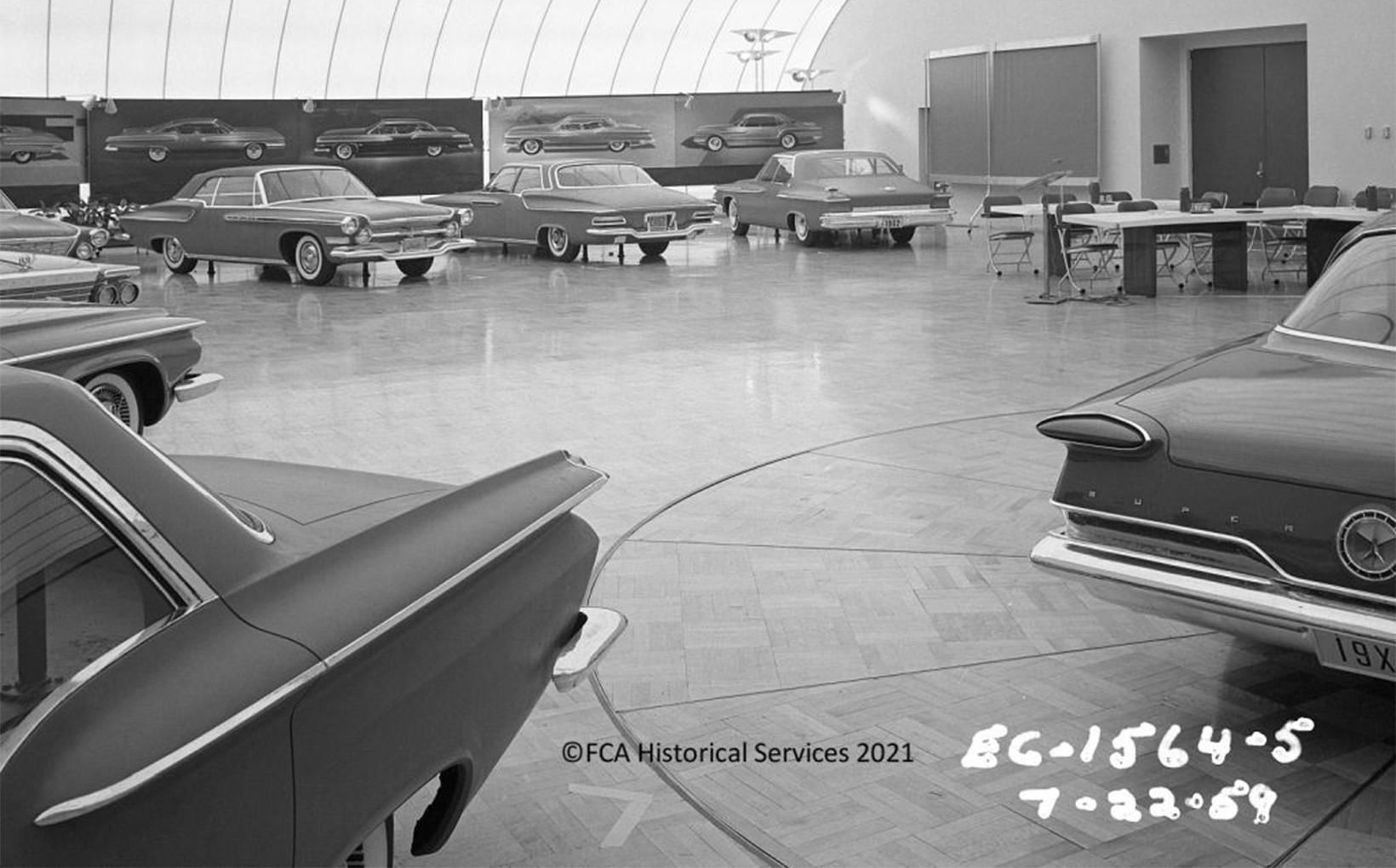 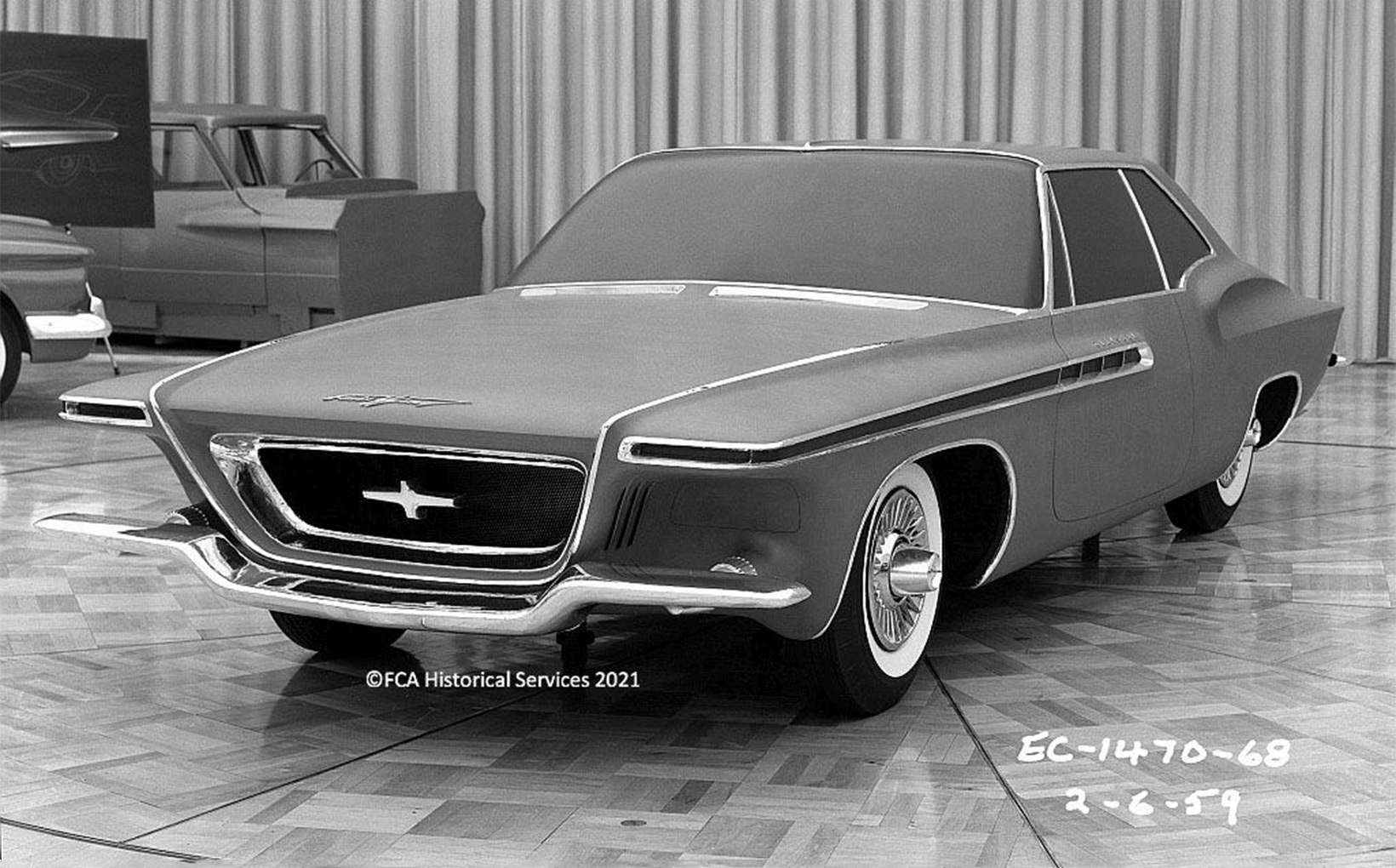 Rare photos of Chrysler’s design studio show the ill-fated S-Cars in development during 1959. The public did not warm to Virgil Exner’s design direction.

You can read all about this debacle in the September 2019 edition of Retroautos. I reveal the inside story, including many never-before-published photos of the “S-cars”. It is a tale of poor decision making, a lack of leadership, a styling direction which alienated customers and dealers and alleged corruption at the most senior levels in the company. Here’s the LINK.

The upshot of this corporate car crash was the exit of Chrysler’s President, Bill Newberg, Chairman, Tex Colbert, and styling boss, Virgil Exner. 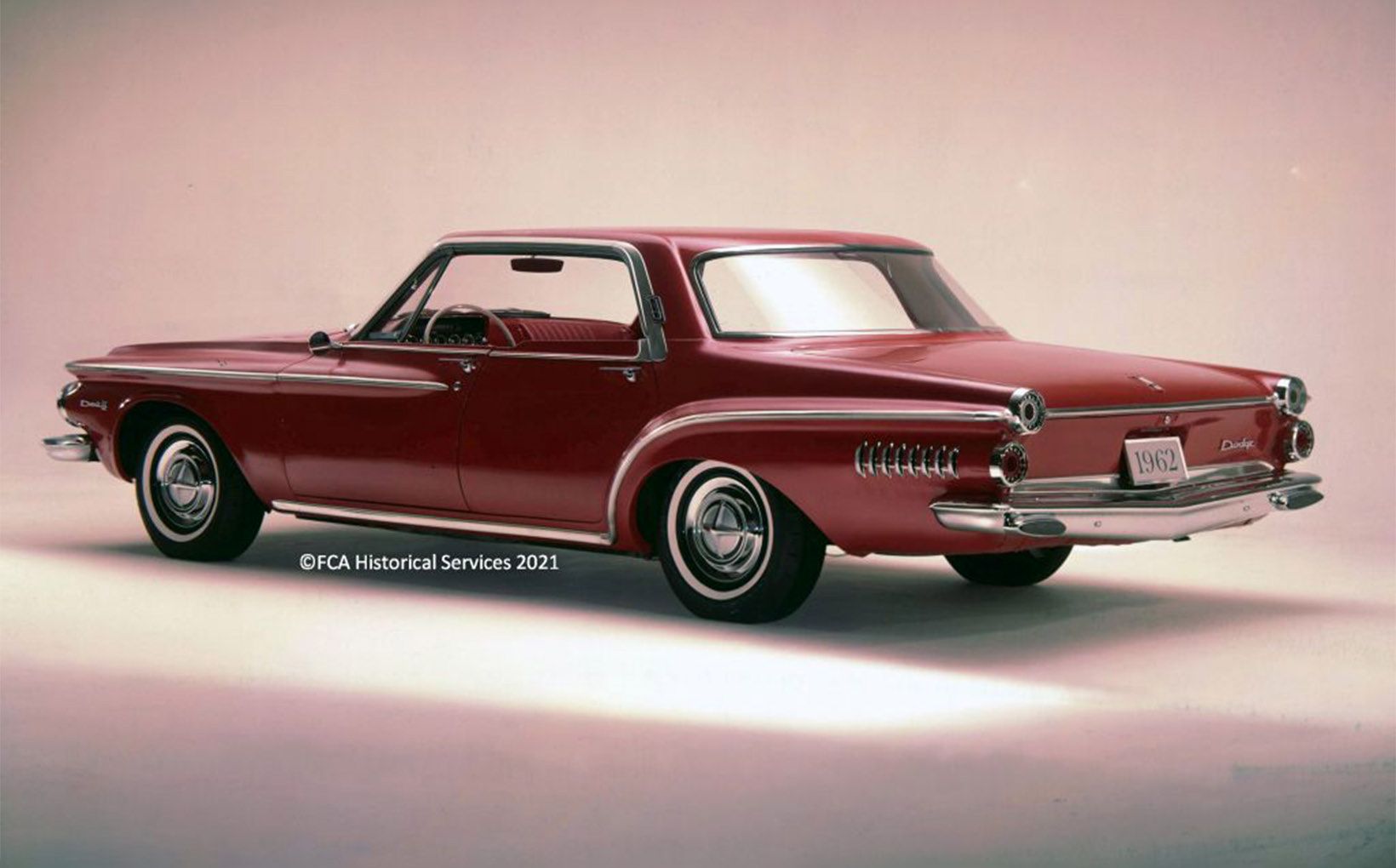 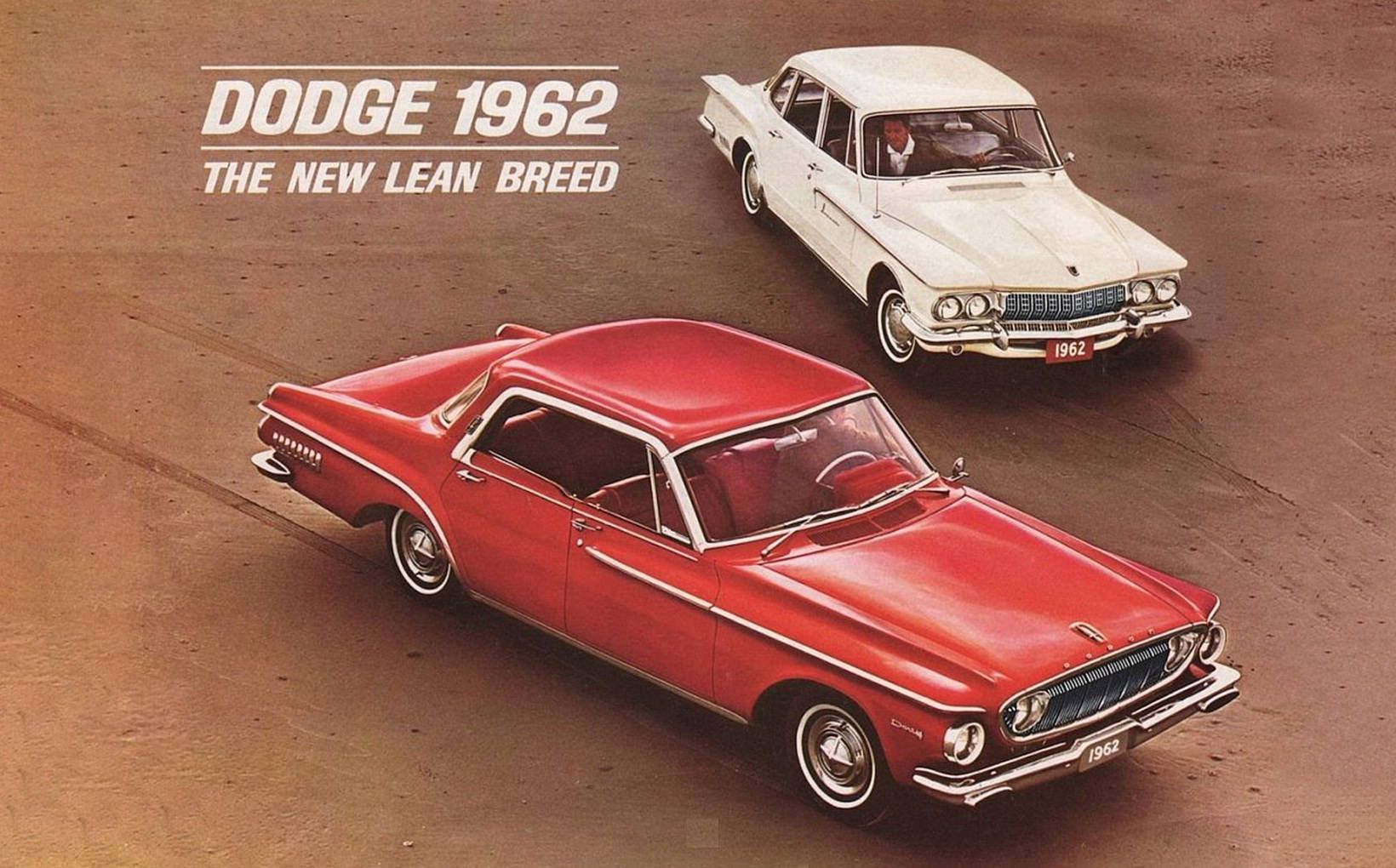 The Dodge Dart sat on a downsized 116 inch/2946mm wheelbase. Originally it was 119 inches/3023mm, until Chrysler President Bill Newberg ordered a reduction in the mistaken belief GM were doing similar. He was wrong. The advertisement accurately sums up Chrysler’s problems with its 1962 range. The new cars wore the styling of the two-year-old economy class Valiant, some of which were already in used car lots. Just why Chrysler’s bosses thought this was a smart idea has never been satisfactorily answered.

When ex-Ford design executive Elwood Engel took over from Exner, he was tasked with fixing the company’s design themes.

Engel’s design preferences saw Chrysler’s cars re-shaped for 1963 and 1964. He was from the longer, lower and wider school. He progressively replaced the 1962’s convoluted curves with the straight lines and flat sheet metal that reflected his award winning 1961 Lincoln Continental.

From his time at Ford, and having also worked at GM very early in his career, Engel knew the value of concept cars to help shape the car buying public’s design preferences and generate much needed publicity. The first concept to come out of Engel’s studios was the famed Turbine, which debuted on 14th May, 1963.

The Turbine was a soaring tribute to Chrysler’s renowned technical prowess and new found design direction. The bronze painted automobile was a sensation and generated plenty of free media for Chrysler. They had Ghia in Italy build 50 and implemented a two-year testing program by the public. All you had to do was write to Chrysler and ask to be included in the program. If selected, you were given a Turbine to drive for three months. I reckon it is the best long term automotive publicity campaign ever devised. 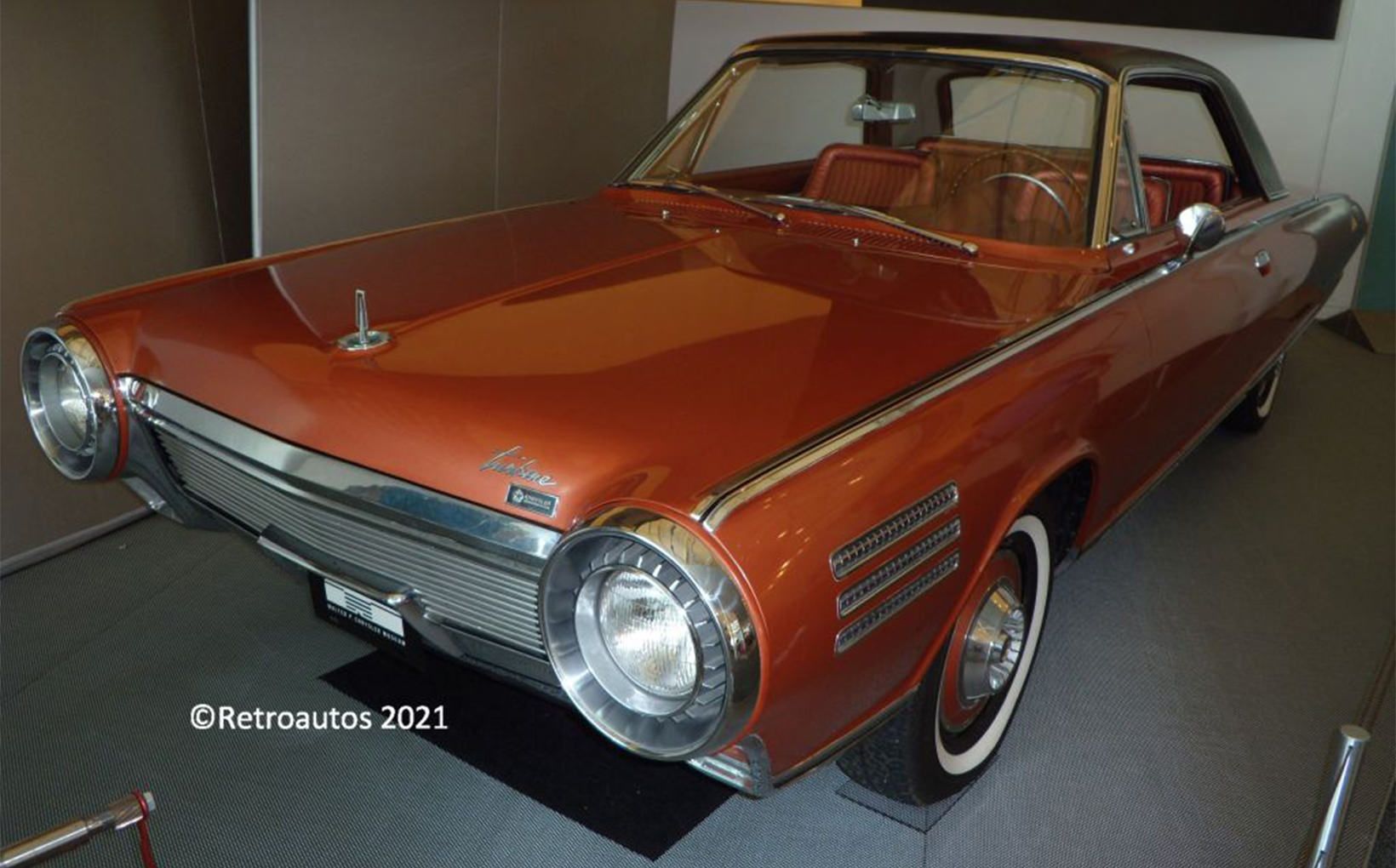 The first two Charger concepts did not have the lofty objectives of the Turbine, but they were part of the overall plan to reassure the company’s dealers and customers that Chrysler was still in business and had new design ideas in the pipeline.

The Charger I and II were constructed very quickly and, by necessity, were based on existing models.

Charger I was a heavily customised 1964 Dodge Polara convertible. This was no small car. The Polara’s wheelbase was 119 inches/3023mm. Its performance image came from the word association with the high profile and very successful Ramcharger drag team. 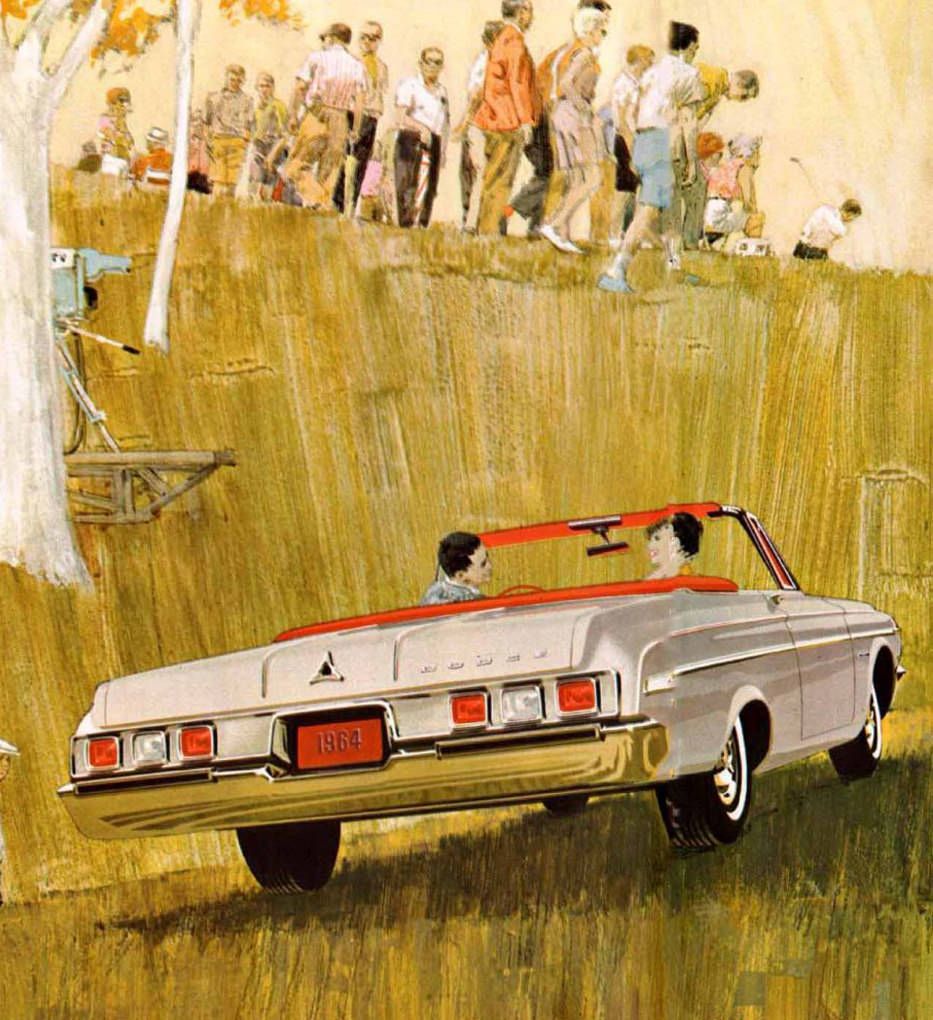 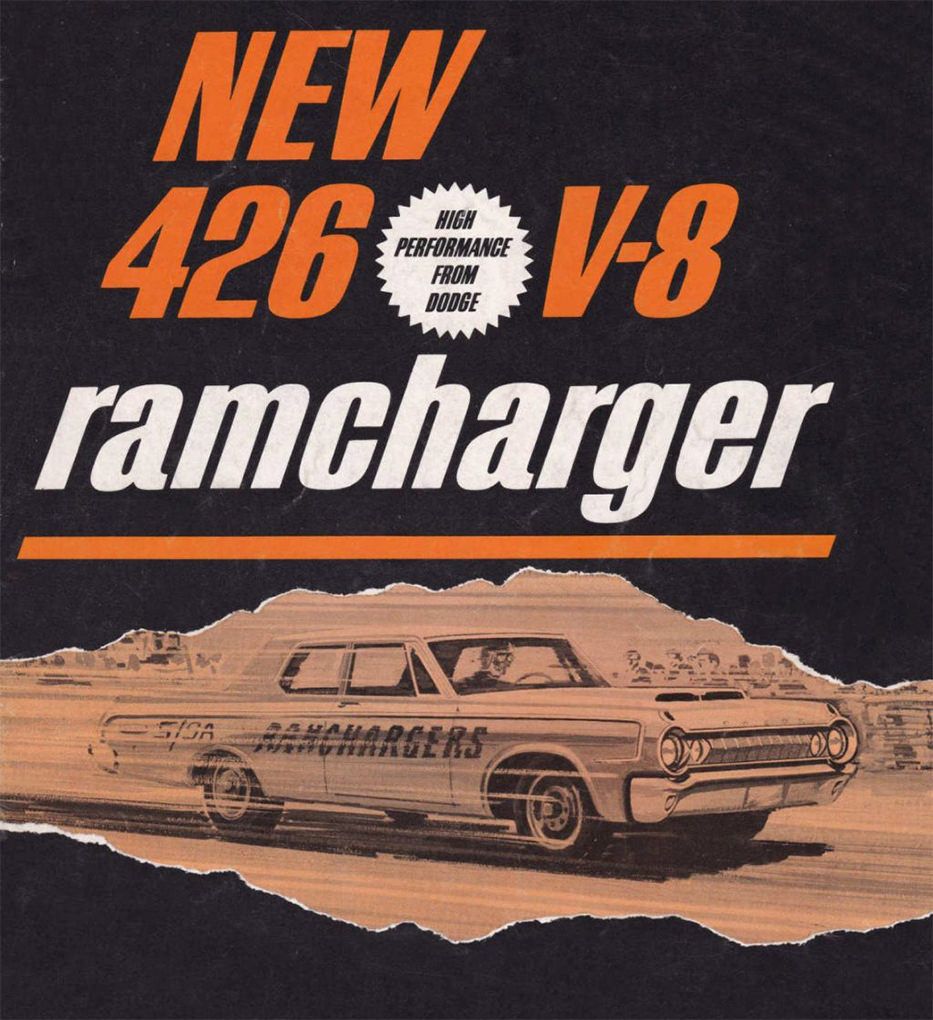 Take a large convertible, add some high power Ramcharger imagery, and the end result is the Charger I.

The designers fashioned a roll bar that incorporated two head rests. The windscreen was cut down to half its original size and the front pillars were replaced with chrome trim strips. An extended rear deck covered the rear seat area. What was left was split into separate compartments by way of a shoulder high console. 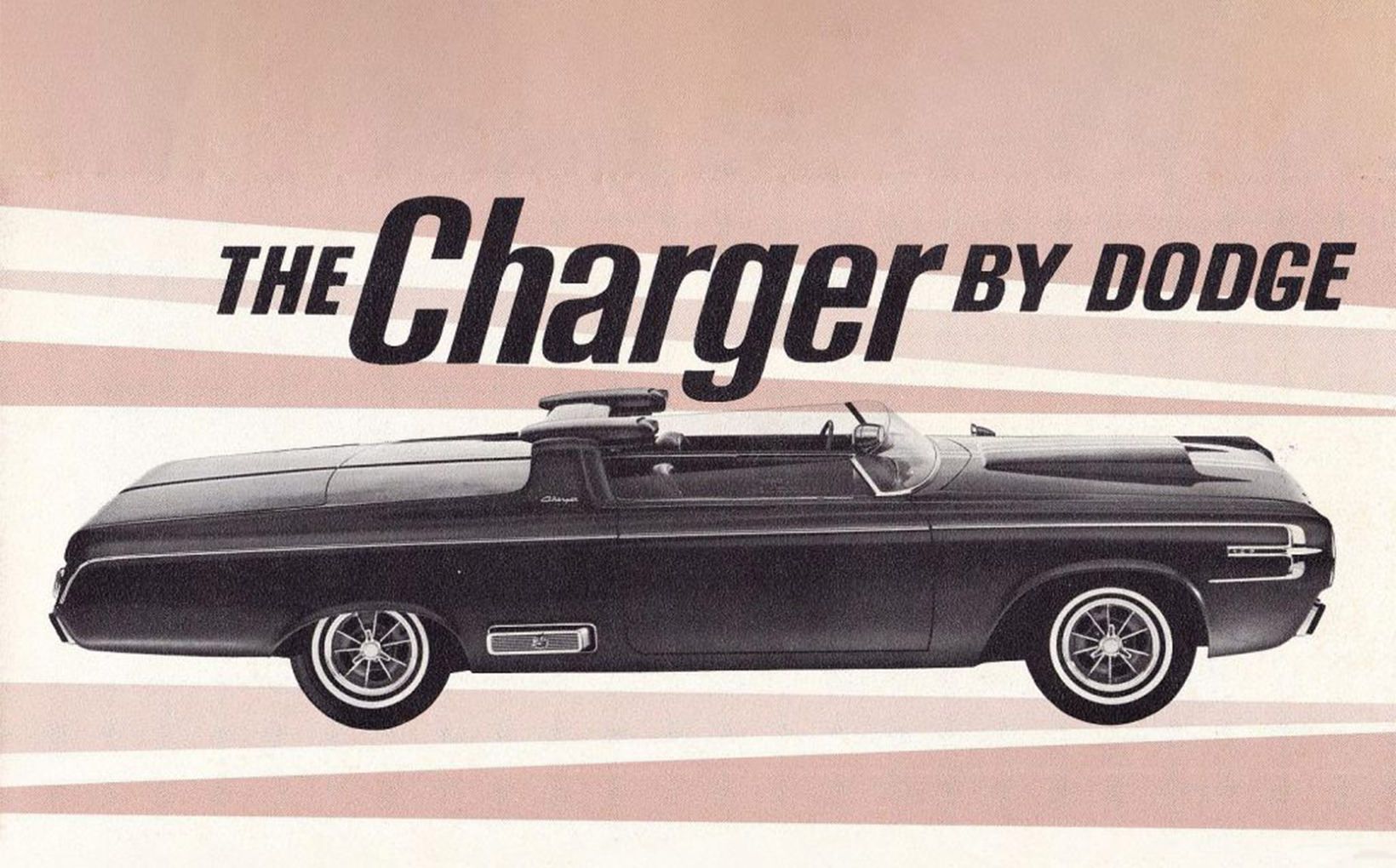 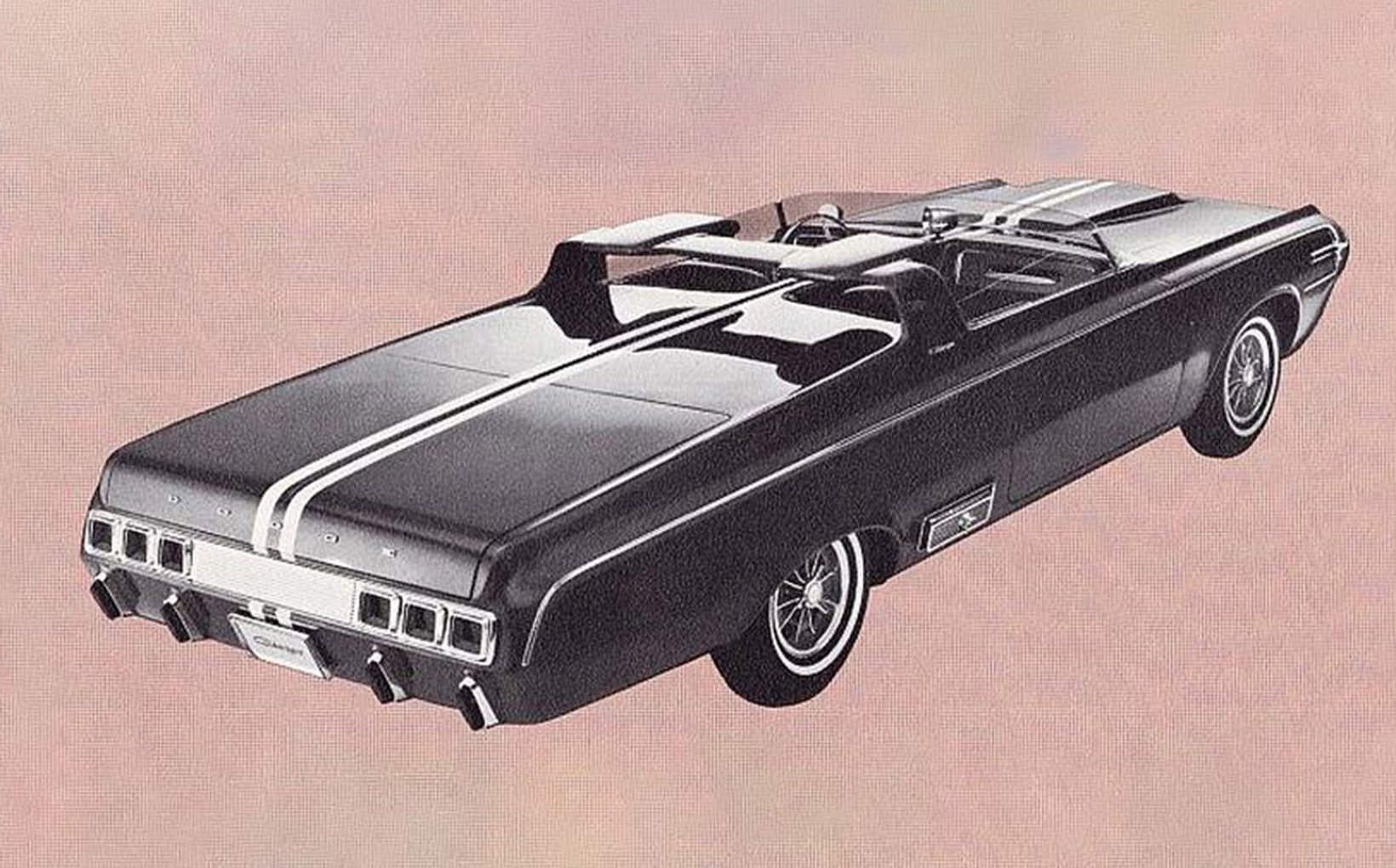 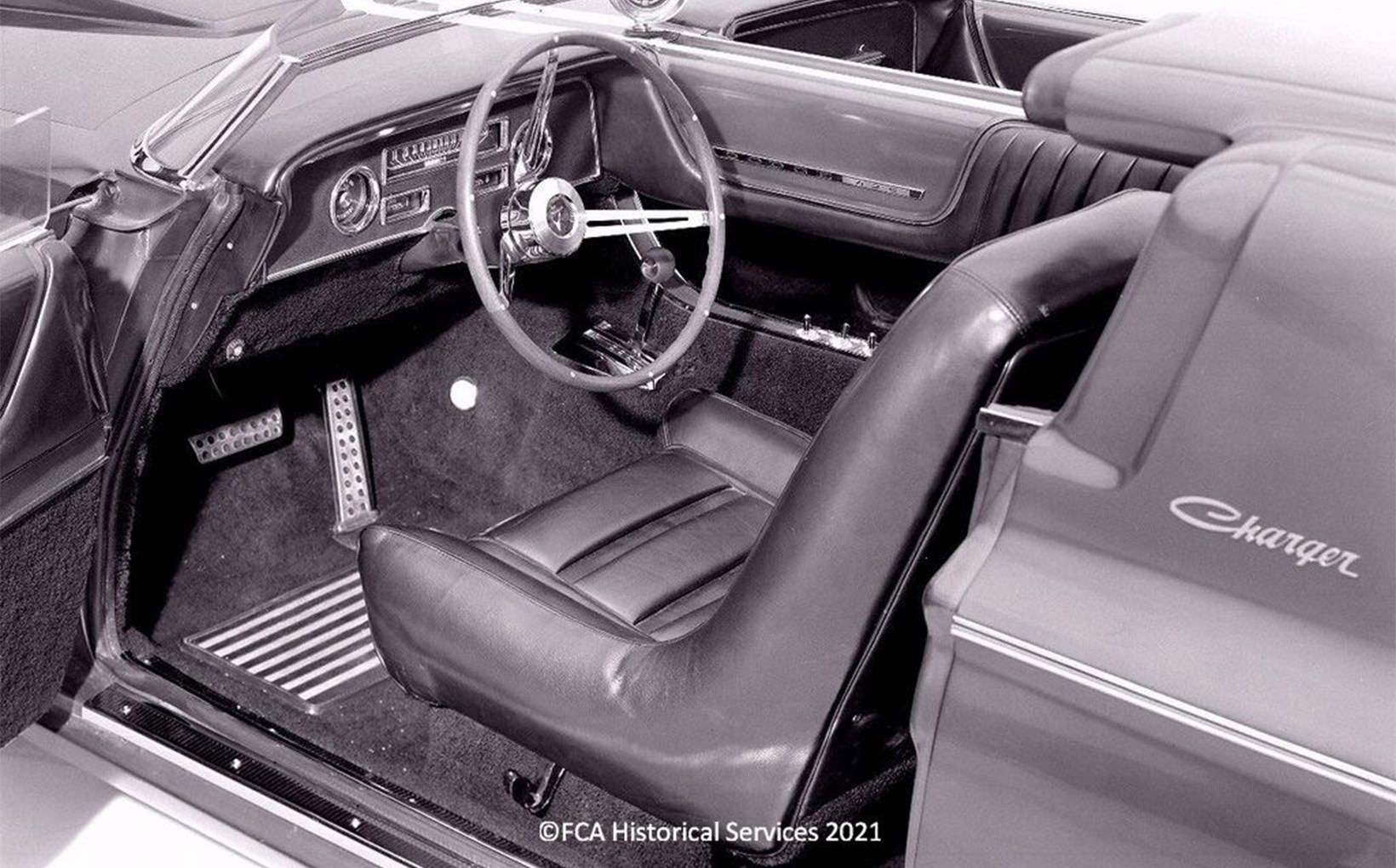 Despite its passenger car origins, the Charger I is a mean looking vehicle. The shoulder high centre console carries the racing stripes from the bonnet through the interior and onto the boot.

When the 1965 Charger II appeared at auto shows, Dodge’s PR team told the media that it was “just an idea”. In reality, the concept car was constructed months after the design of the planned 1966 road car had been locked in.

The 1966 Charger production car originated from demands by Dodge’s dealers for something similar to Plymouth’s Valiant-based 1964 Barracuda. Chrysler’s CEO, Lyn Townsend, informed them that the Barracuda was strictly for Plymouth. To appease their angst, Townsend promised the dealers a bigger car to fight Pontiac’s GTO. And so, work on a production Charger started.

To accelerate the project, Dodge stylists took a Dodge Coronet two door hardtop and gave it a fast back roof. They added a concave rear window and hidden headlights. 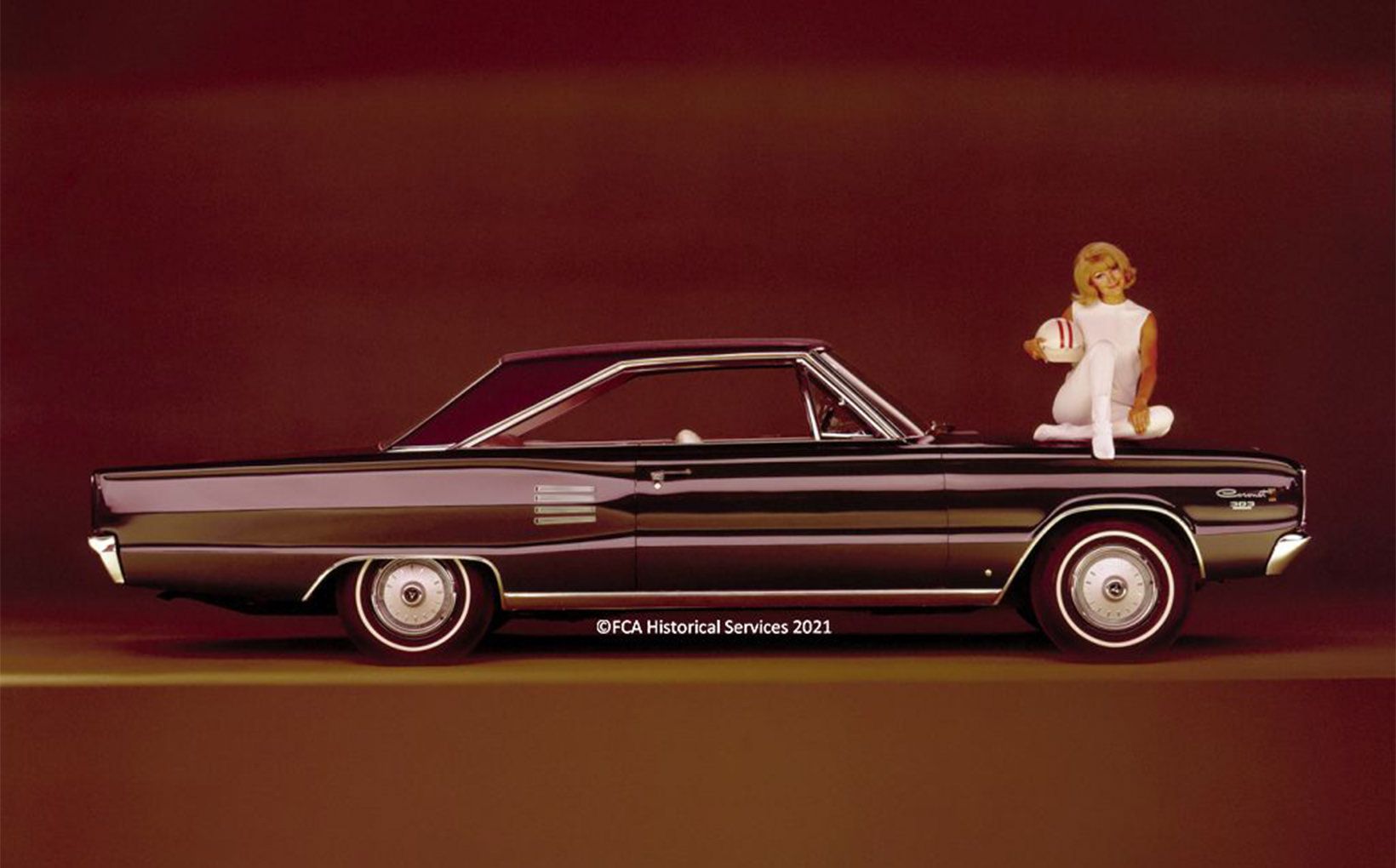 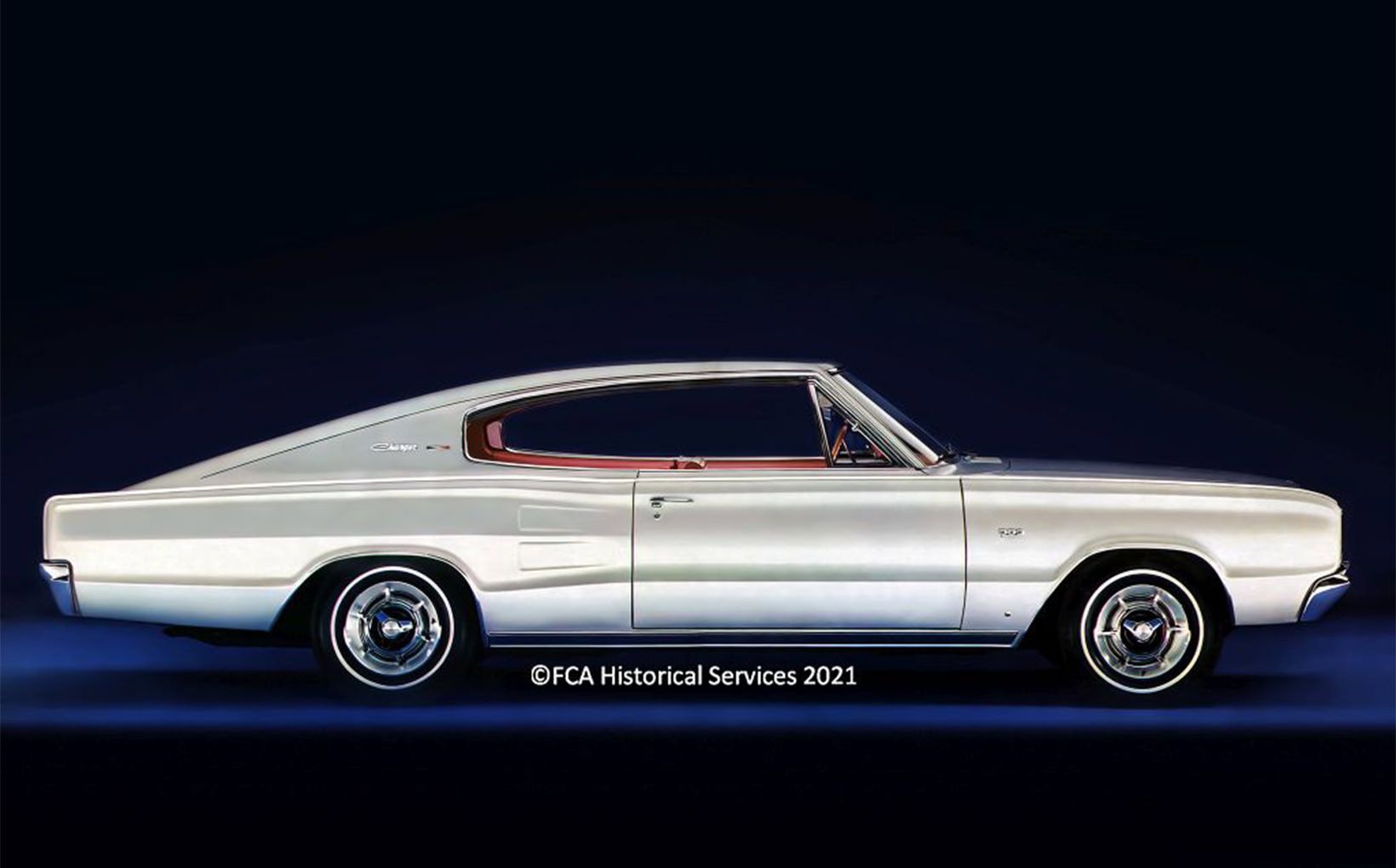 The first series production Charger was a quick re-work of the Dodge Coronet coupe. It sold 52,000 units during its 18 months on the market. The new model arrived in 1968 and sales jumped to 92,000 that year. The Charger reflected Elwood Engel’s design philosophy, which was progressively being applied across Chrysler’s range. The cars were elongated rectangles with sheet metal reaching out to each corner. Few curves rode here.

The Charger II allowed Dodge the time to talk-up its muscle car credentials and include it in the company’s “Dodge rebellion” advertising campaign, twelve months ahead of the road car’s debut. The rebellion message was simple: change the status quo, kick butt and drive something cool. 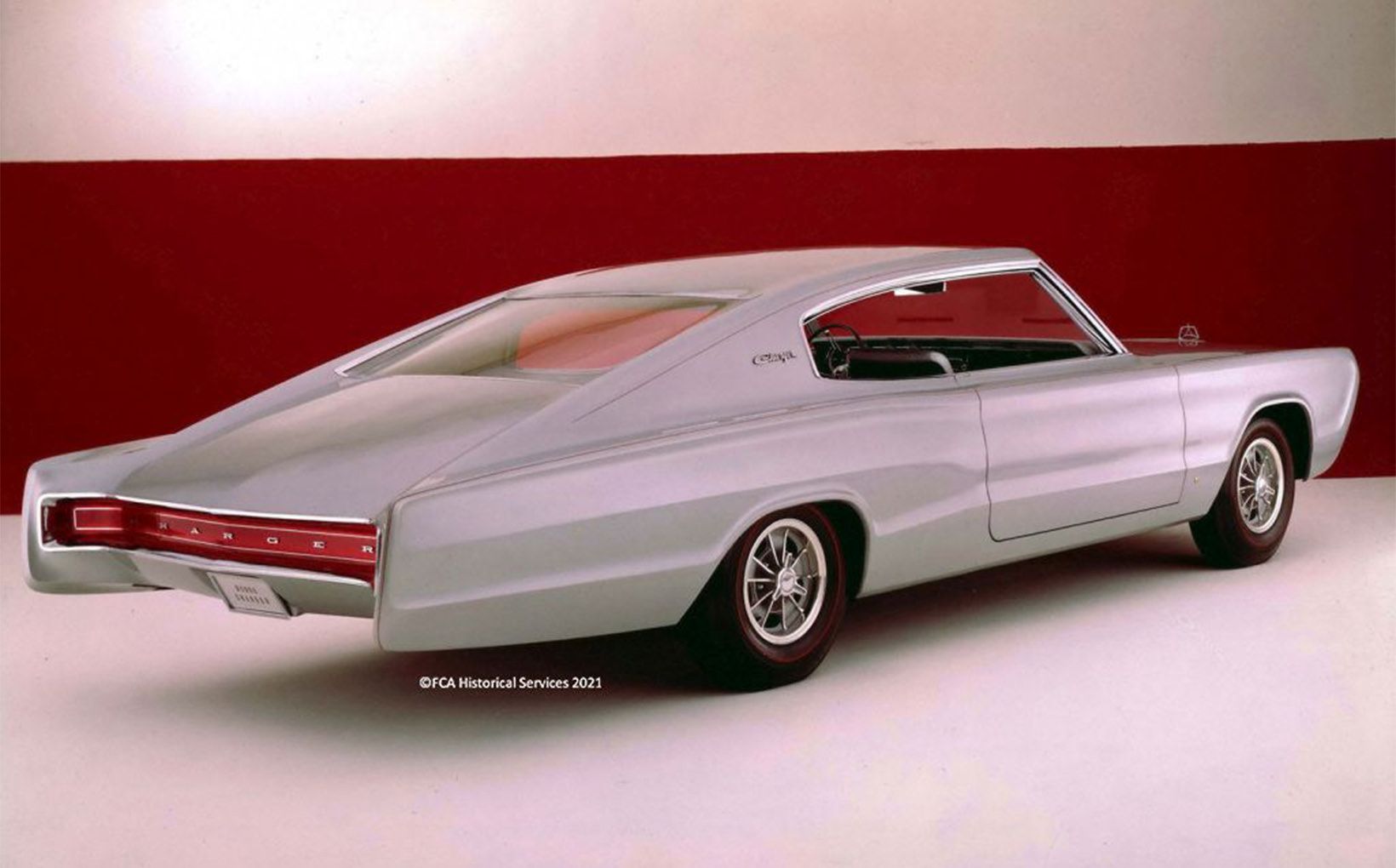 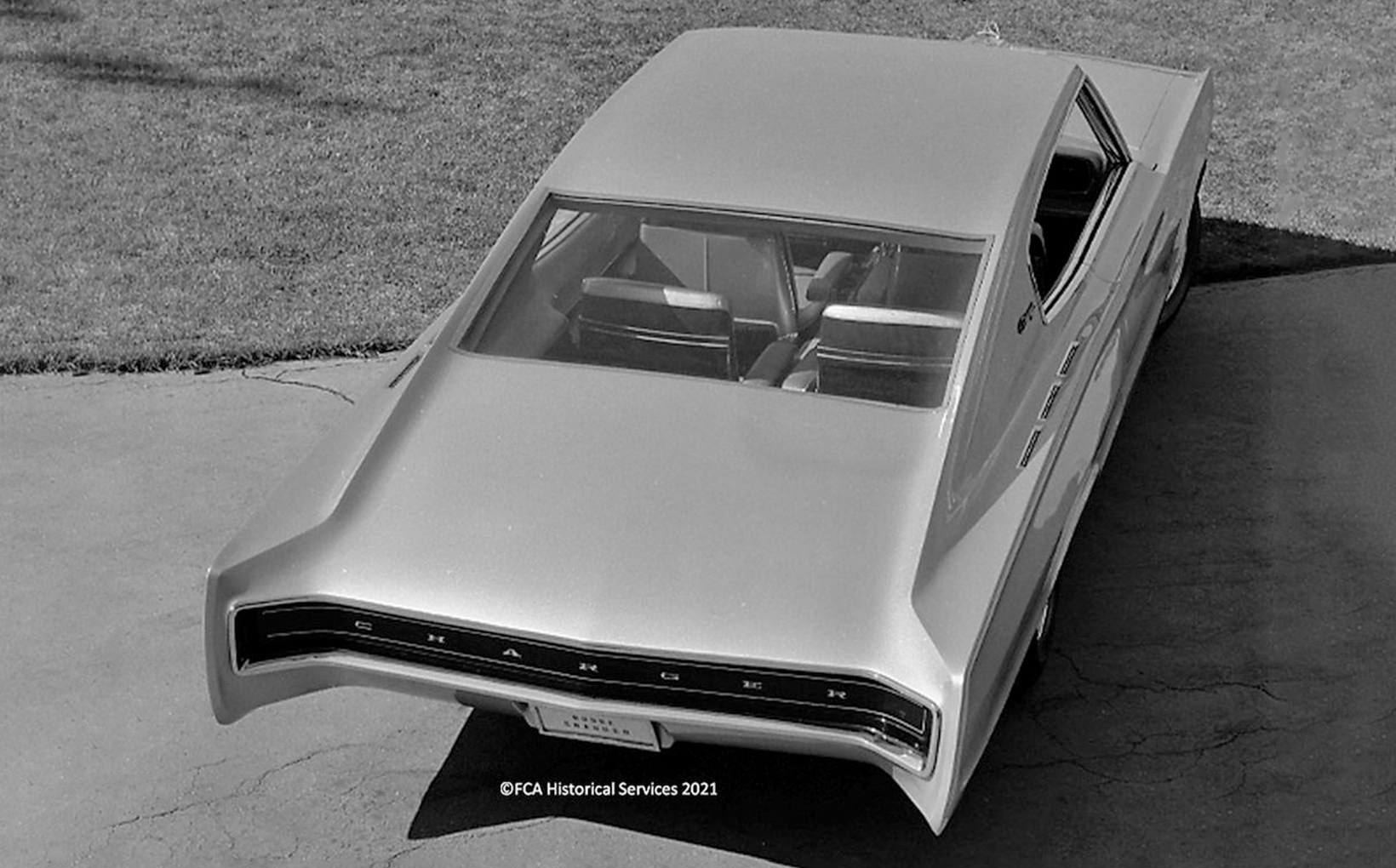 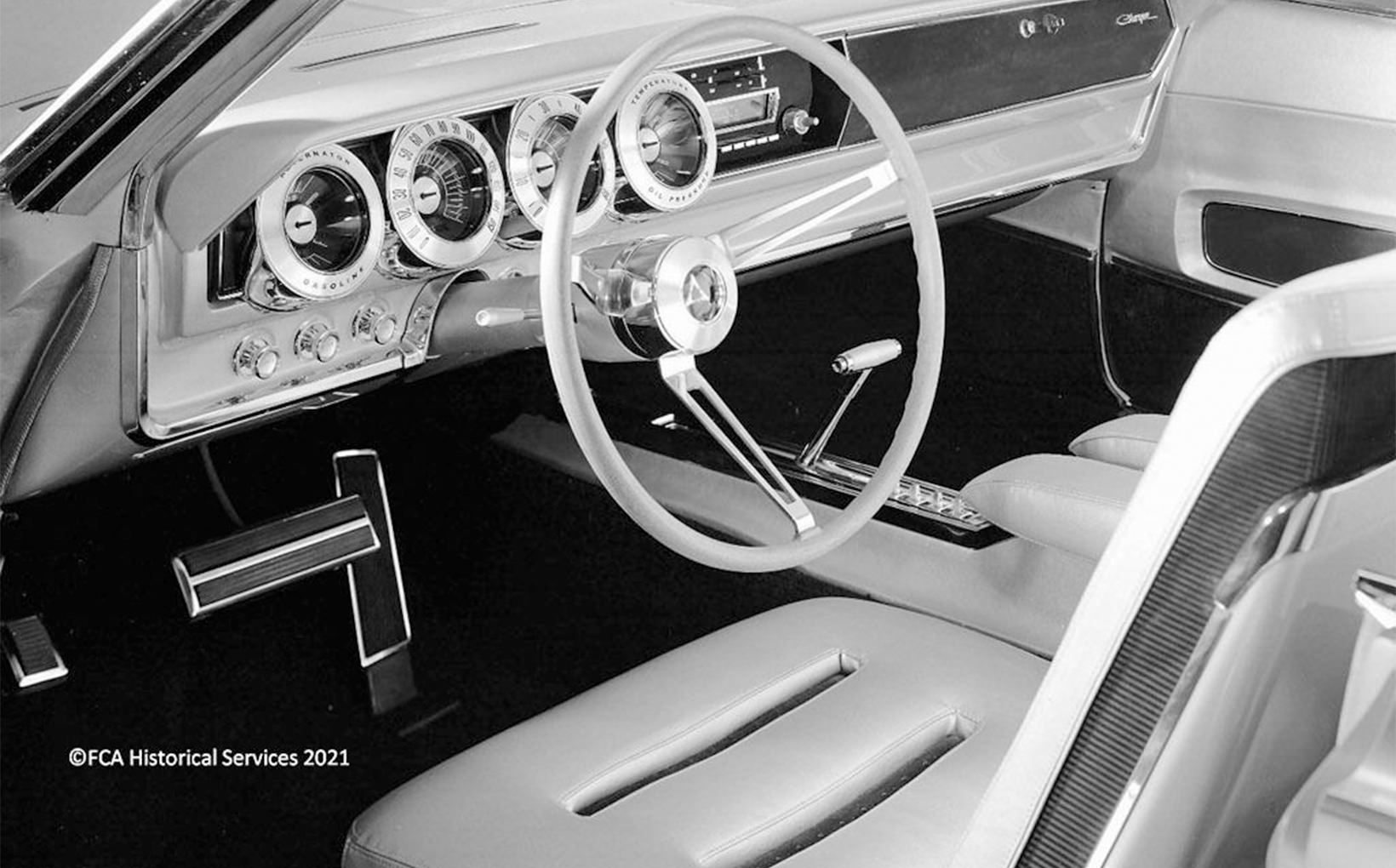 No doubt about it, the Charger II certainly generated plenty of media attention and MoPar fan interest.

The Charger II was never an operable car. The brochure said it would accept all of Chrysler’s Hemi V8s. The interior featured four bucket seats which were separated by a centre console which stretched from the dashboard to the back seats. The back seats also folded flat to provide a large loading space. This idea was taken directly from the Barracuda. When the production Charger appeared, it had this same interior layout. 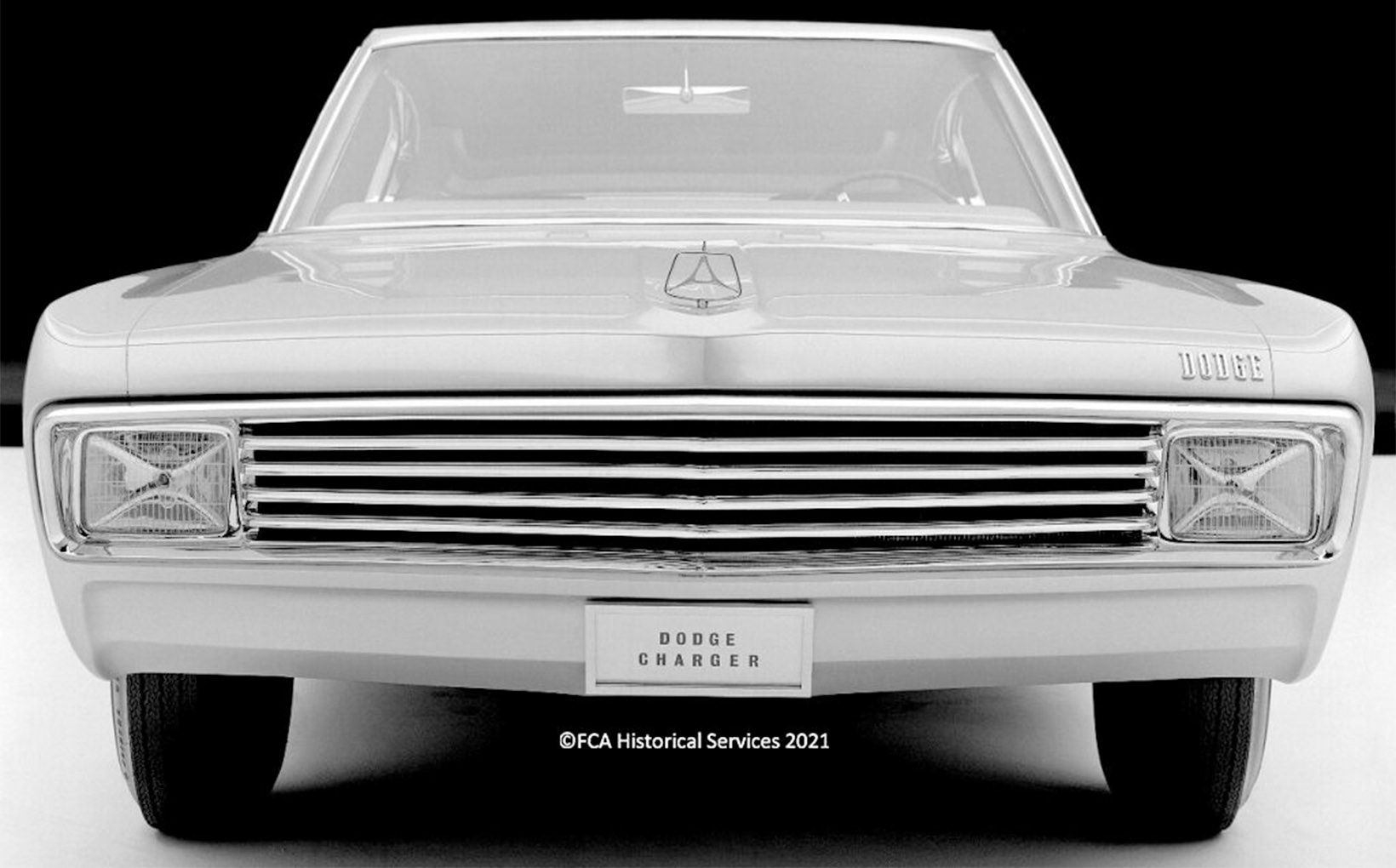 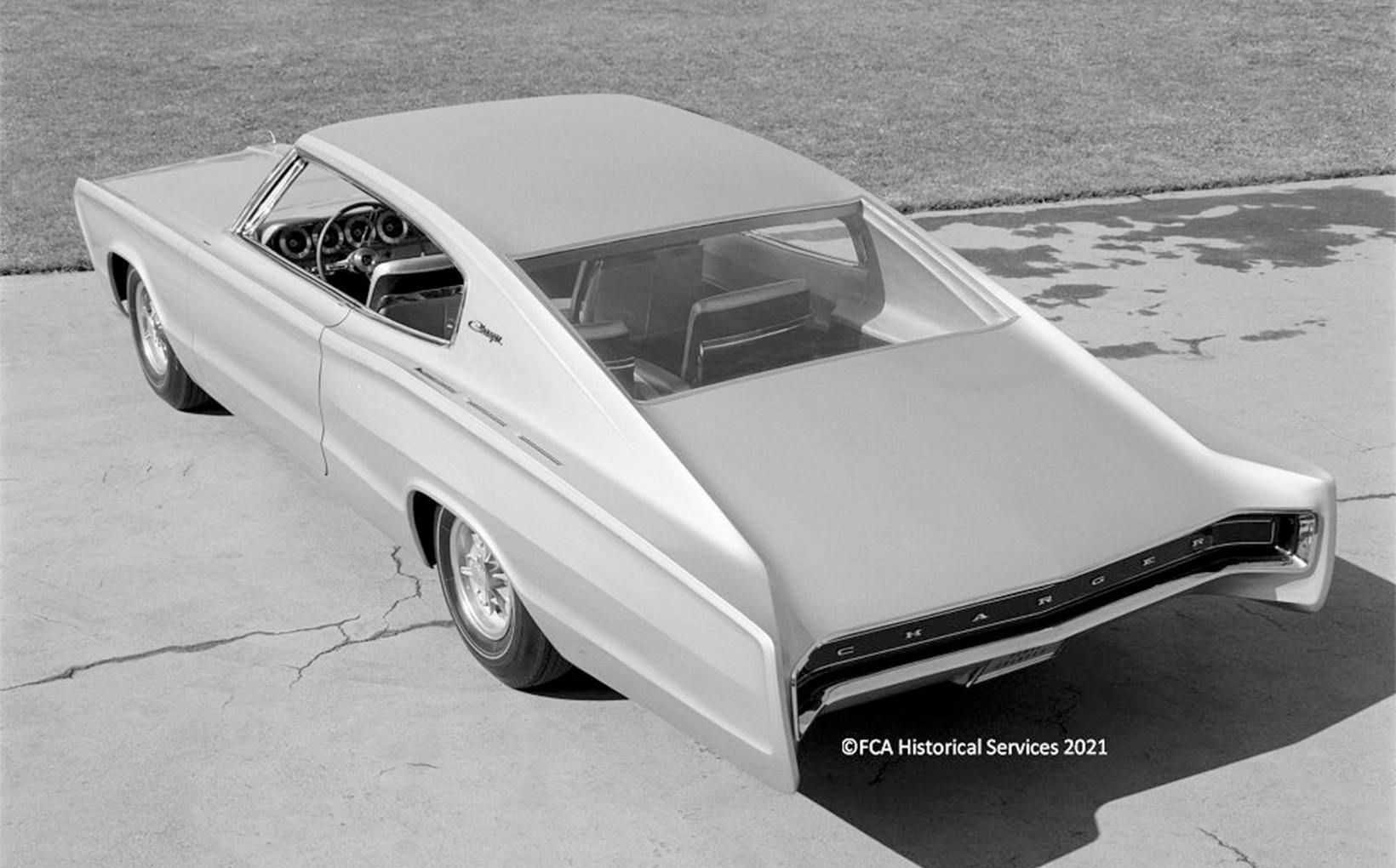 Basing the concept car on the already locked-in road car design was a smart move. It gave the impression the road car was a natural development of the concept car. Ford used a similar tactic with the Mustang II, in October 1963, ahead of the actual car in April 1964.

Work on Charger III began in 1967 and was a complete break with the past. For Engel, it was setting a design theme for the next decade: the fuselage.

Chrysler’s PR folk described the fuselage theme like this: "Your next car can have a fuselage-frame that curves up and around you in one fluid line. Close the window and the arc is complete…from under the doors to over the cockpit." 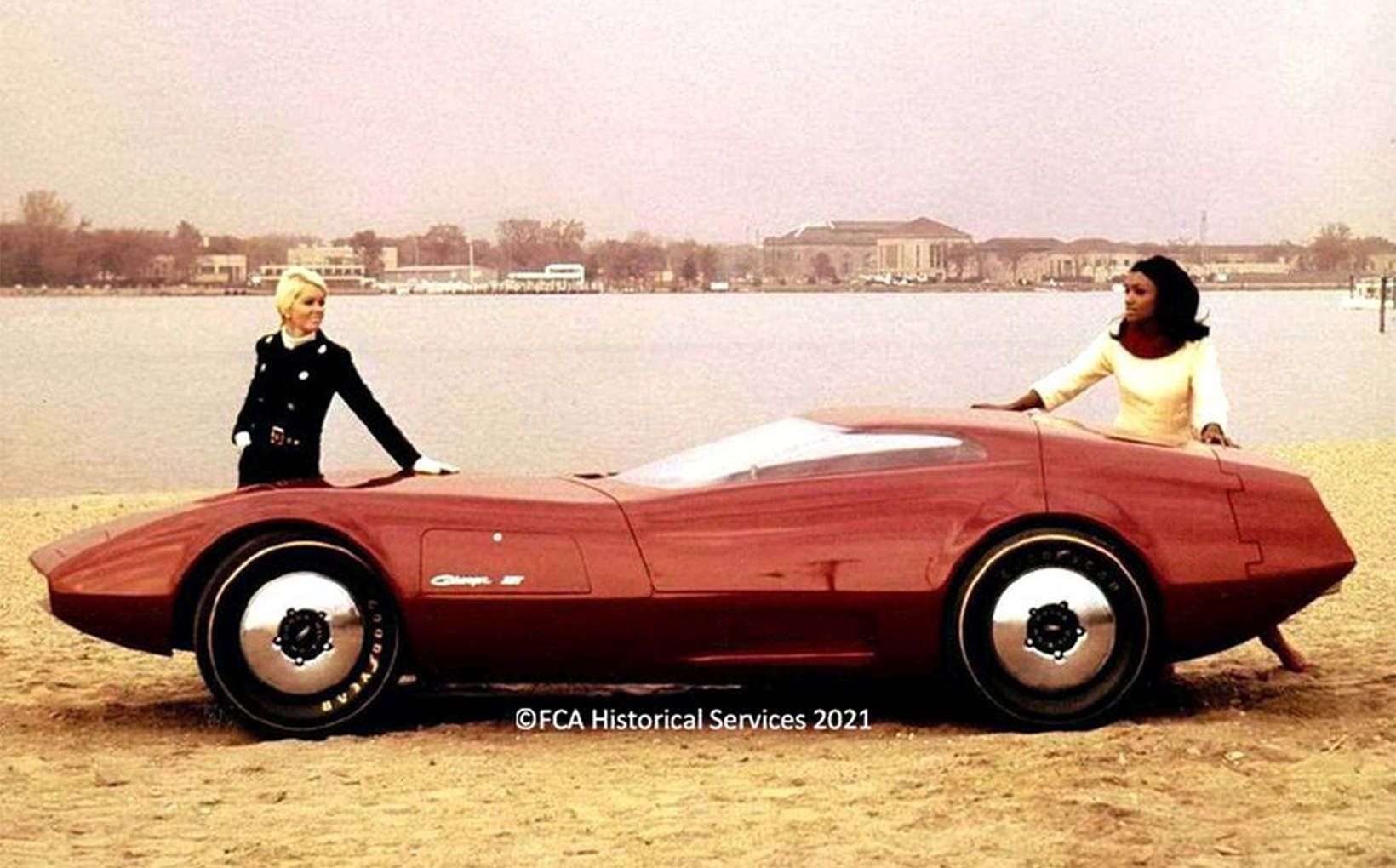 The styling of the Charger III puts all of the visual weight behind the rear wheels. You can image it doing wheel stands.

Looking similar to the 1968 Corvette, the broad-shouldered Charger III two-seater sports car was a “pushmobile” only. It sat on a 100 inch/2540mm wheelbase and was just 42 inches/1067mm high. Apart from its svelte shape, the car boasted a rear mount air brake and a periscope rear vision mirror. The jet-fighter canopy lifted up and back. The steering wheel, column and attached instrument panel rose in unison with the canopy, as did the seats. When the driver and passenger were seated, it all reset to the operating level. 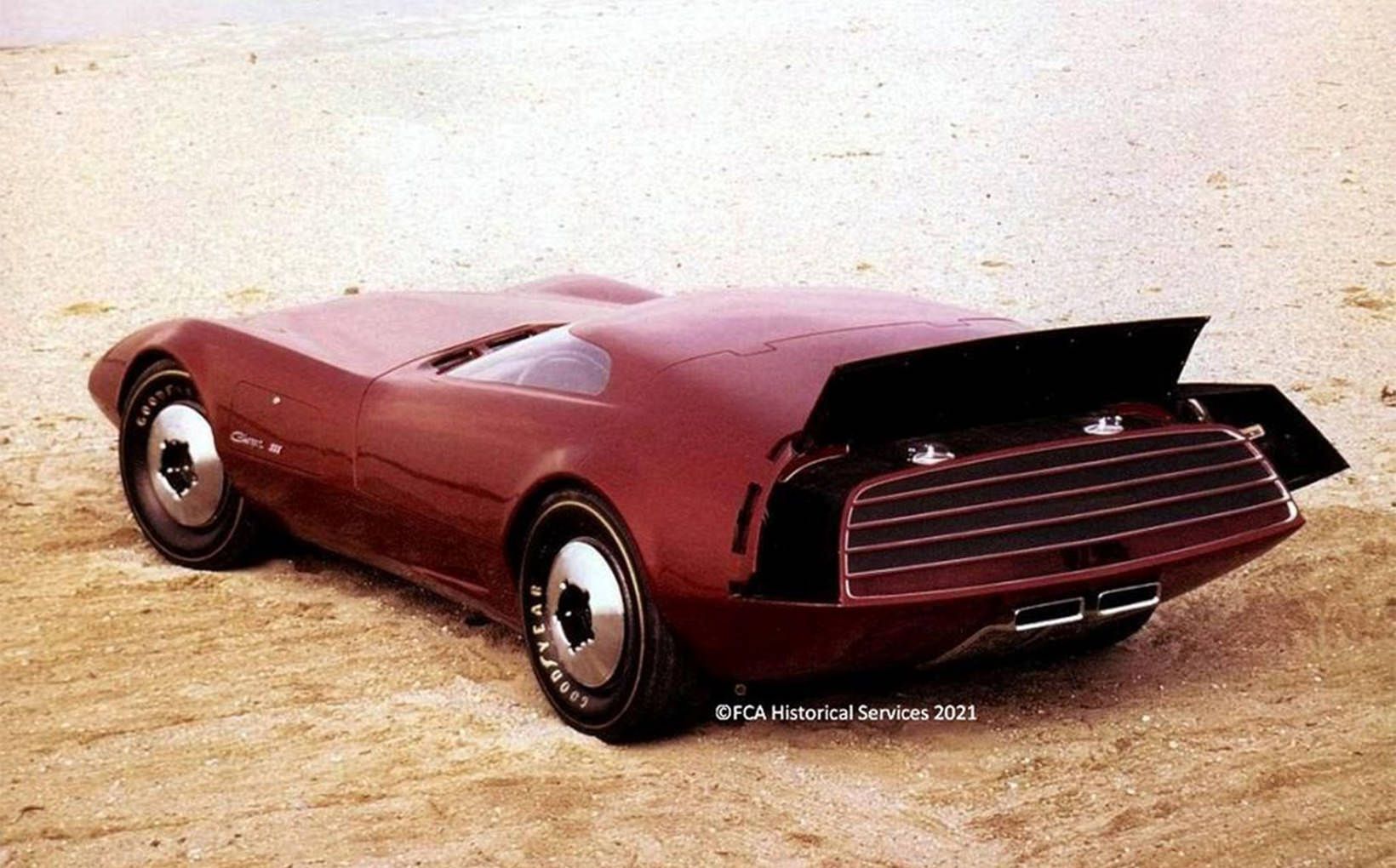 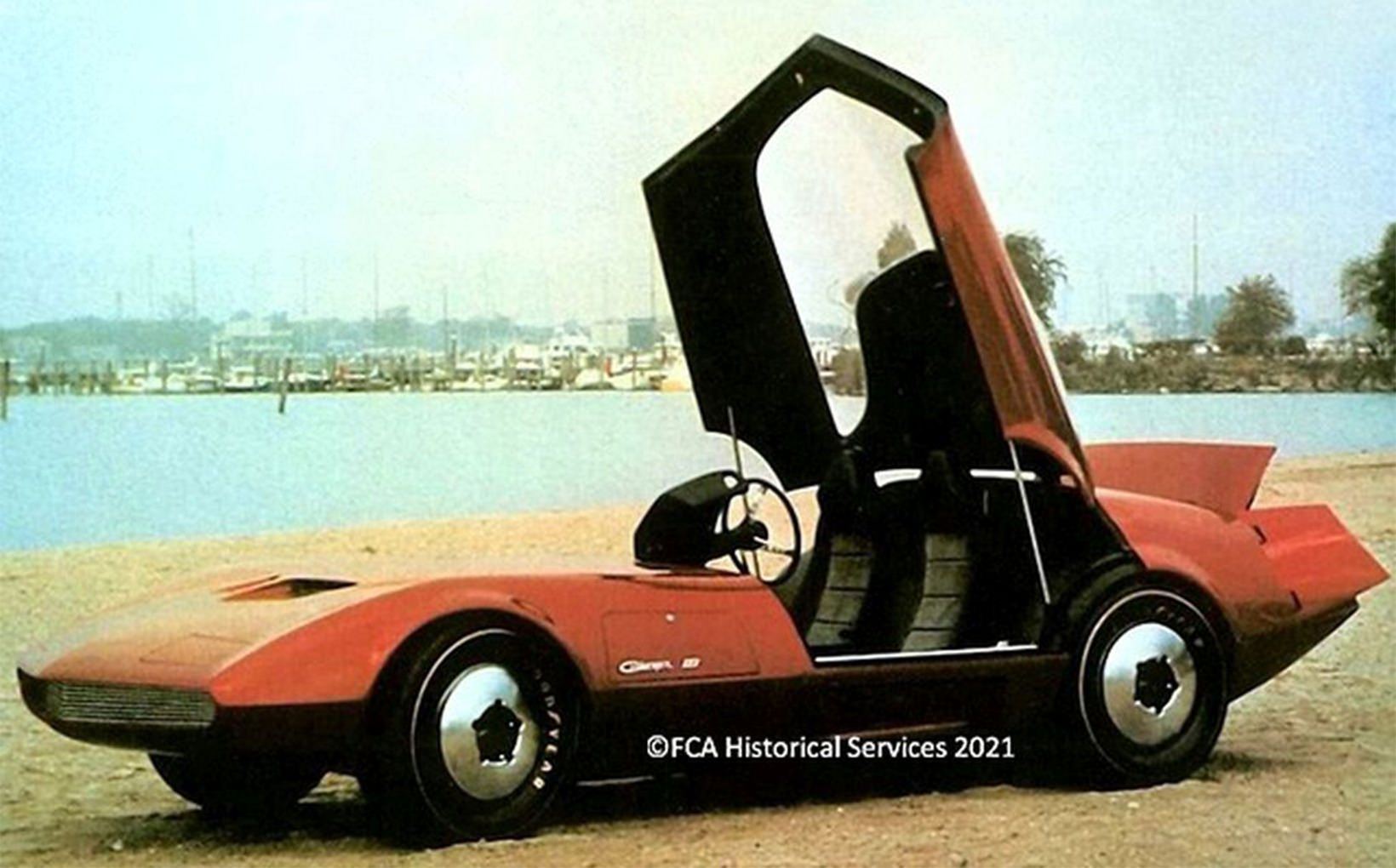 The Charger III’s overall styling theme of smooth sides, flush glass and defined lines which were applied to new Chrysler models from 1969 onwards. 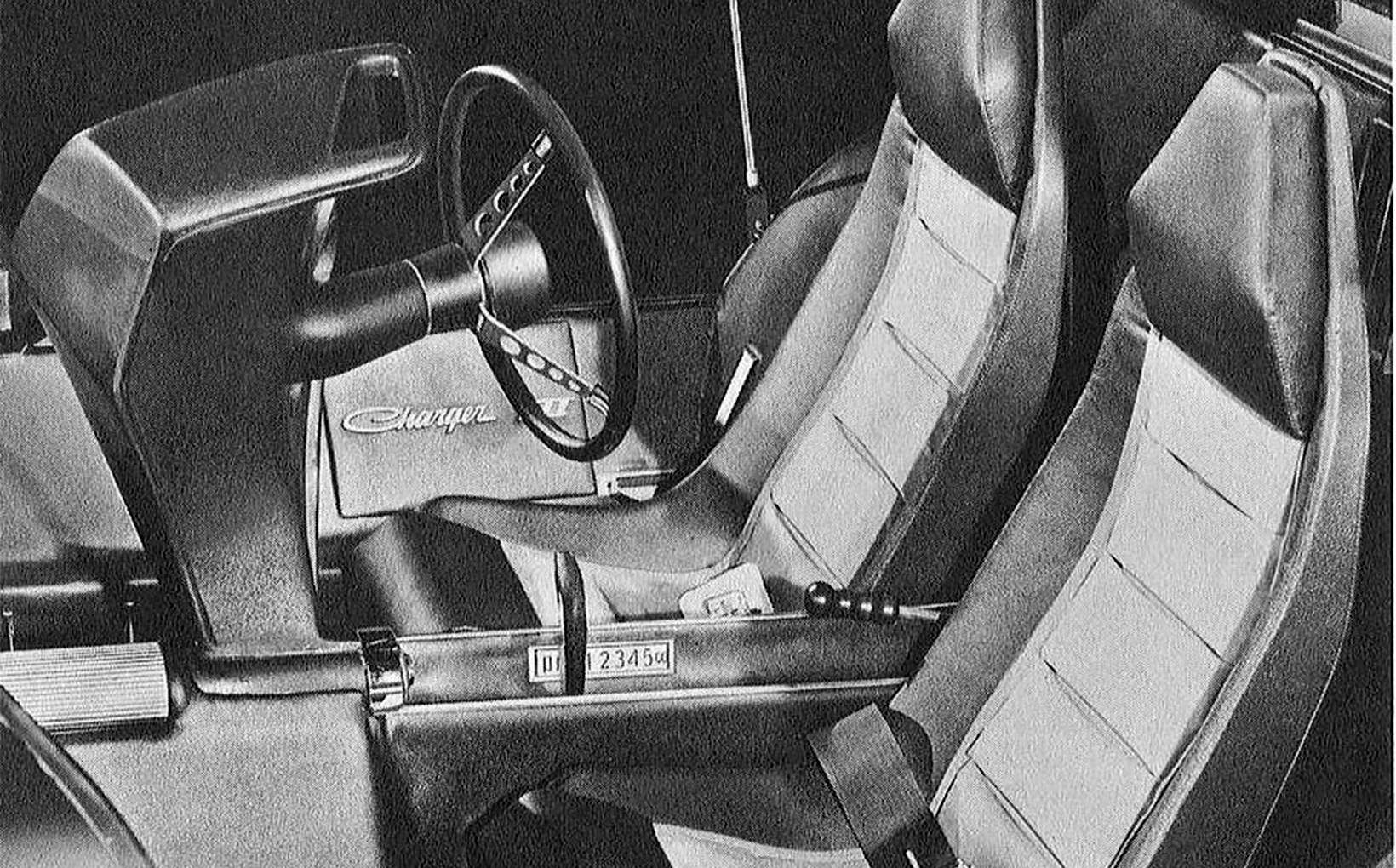 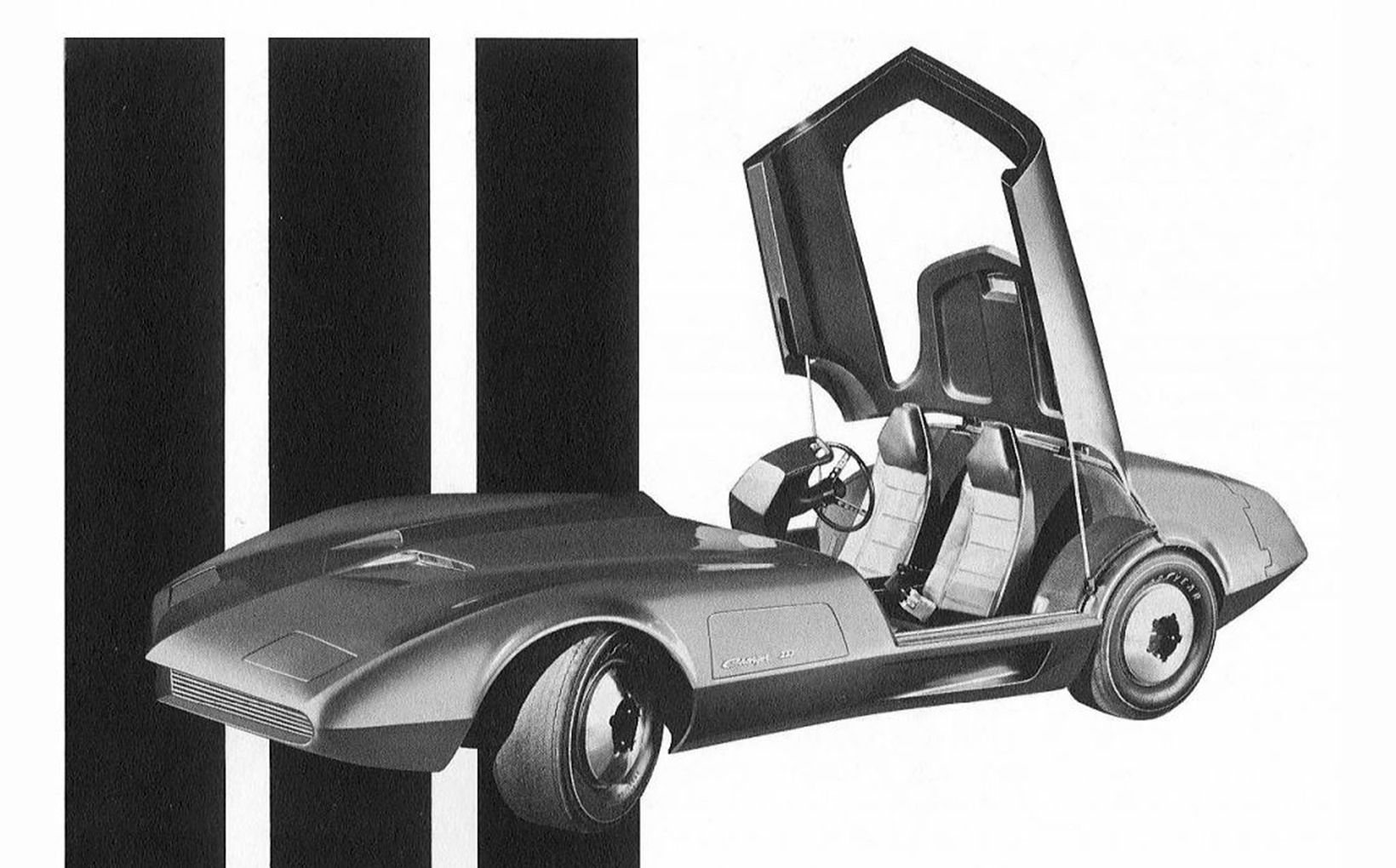 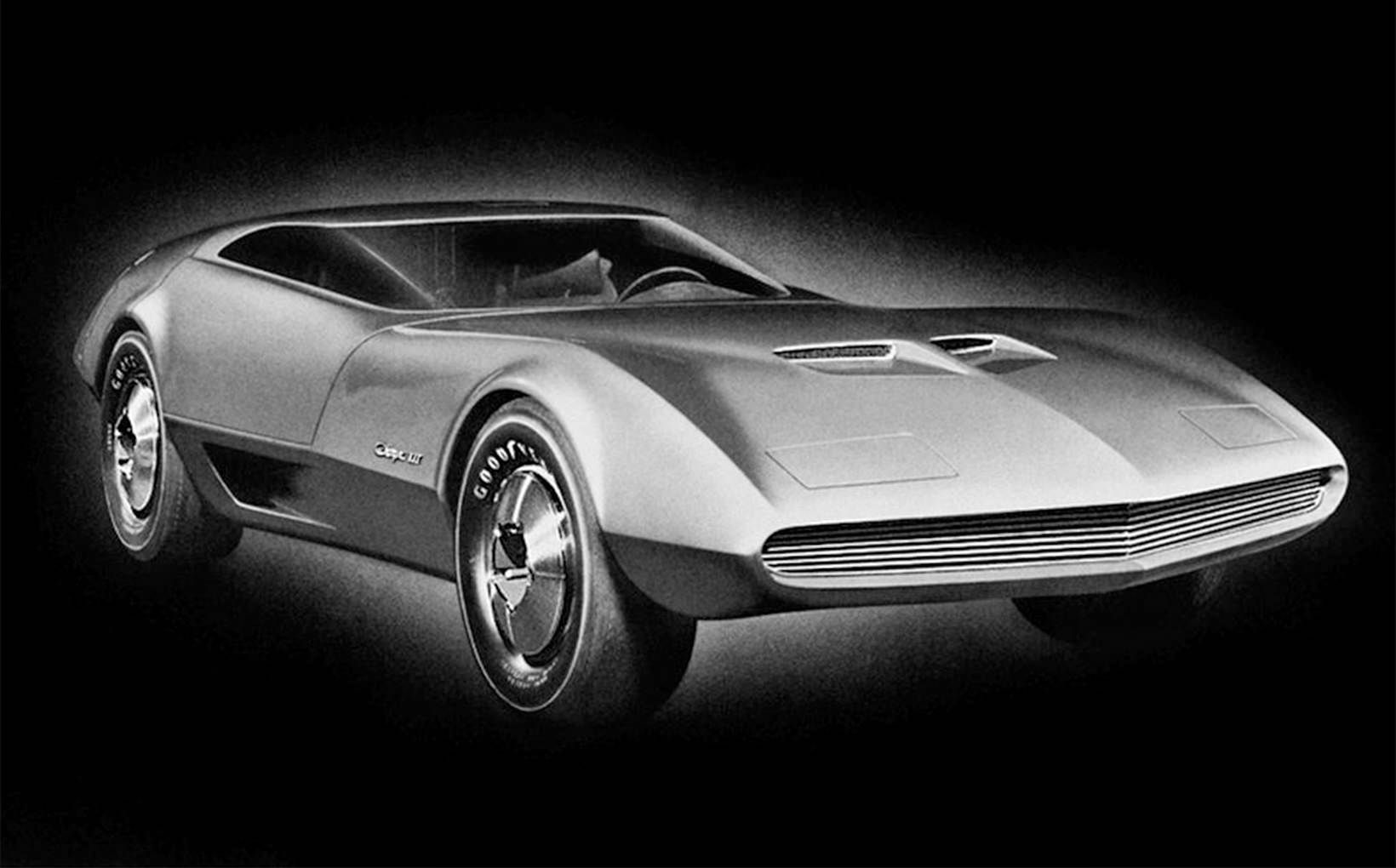 The dashboard, steering wheel and column were all connected to a hinge in the centre of the car. They pivoted up and to the left when the canopy was opened to allow entrance and exit.

Elements of the Charger III’s styling predicted the design of the 1971 Plymouth Satellite and Dodge Charger, especially the smooth C pillars. And you can see aspects of the Charger III muscle-bound lines in Dodge’s 1999 Charger R/T concept and 2006 road car. 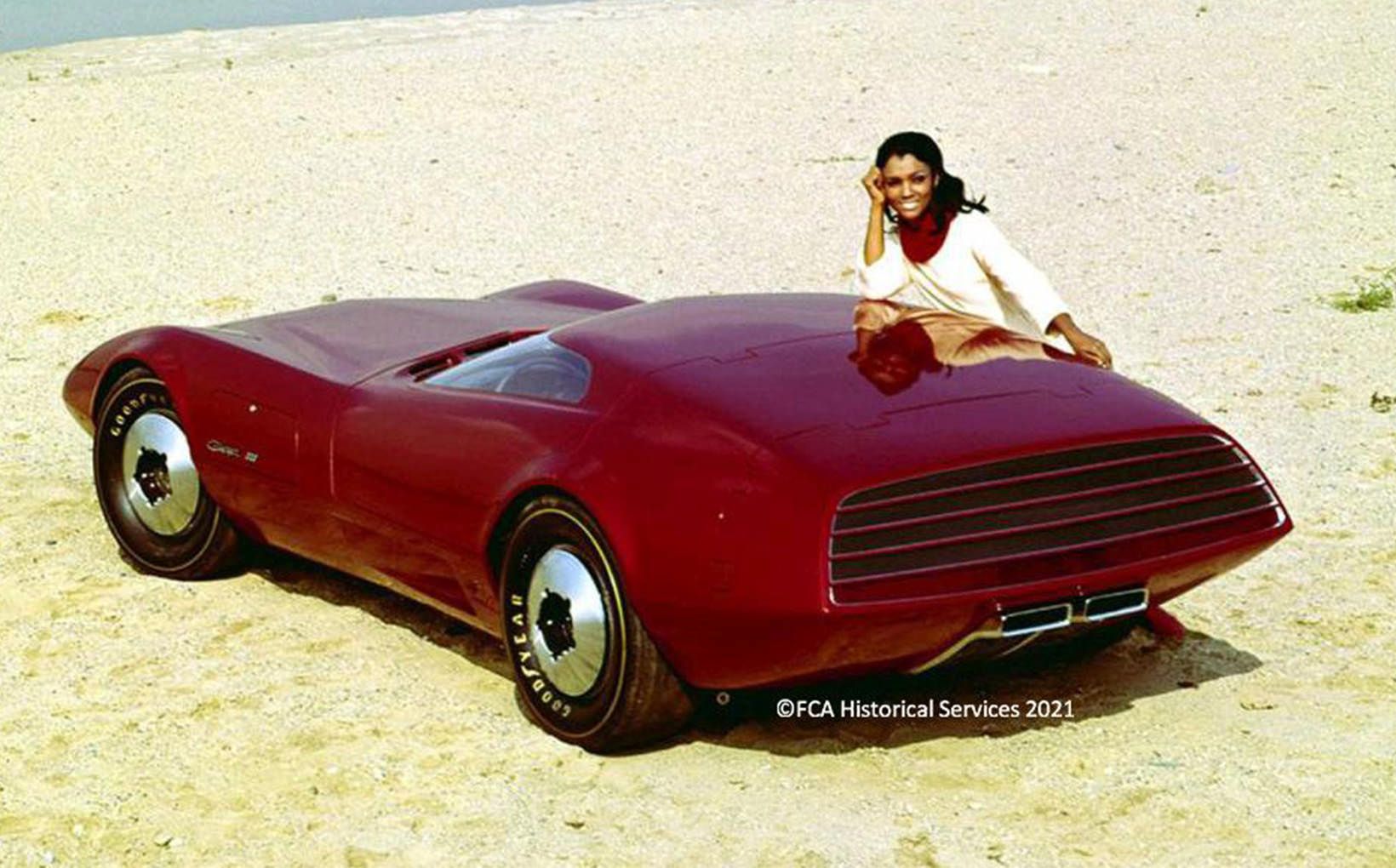 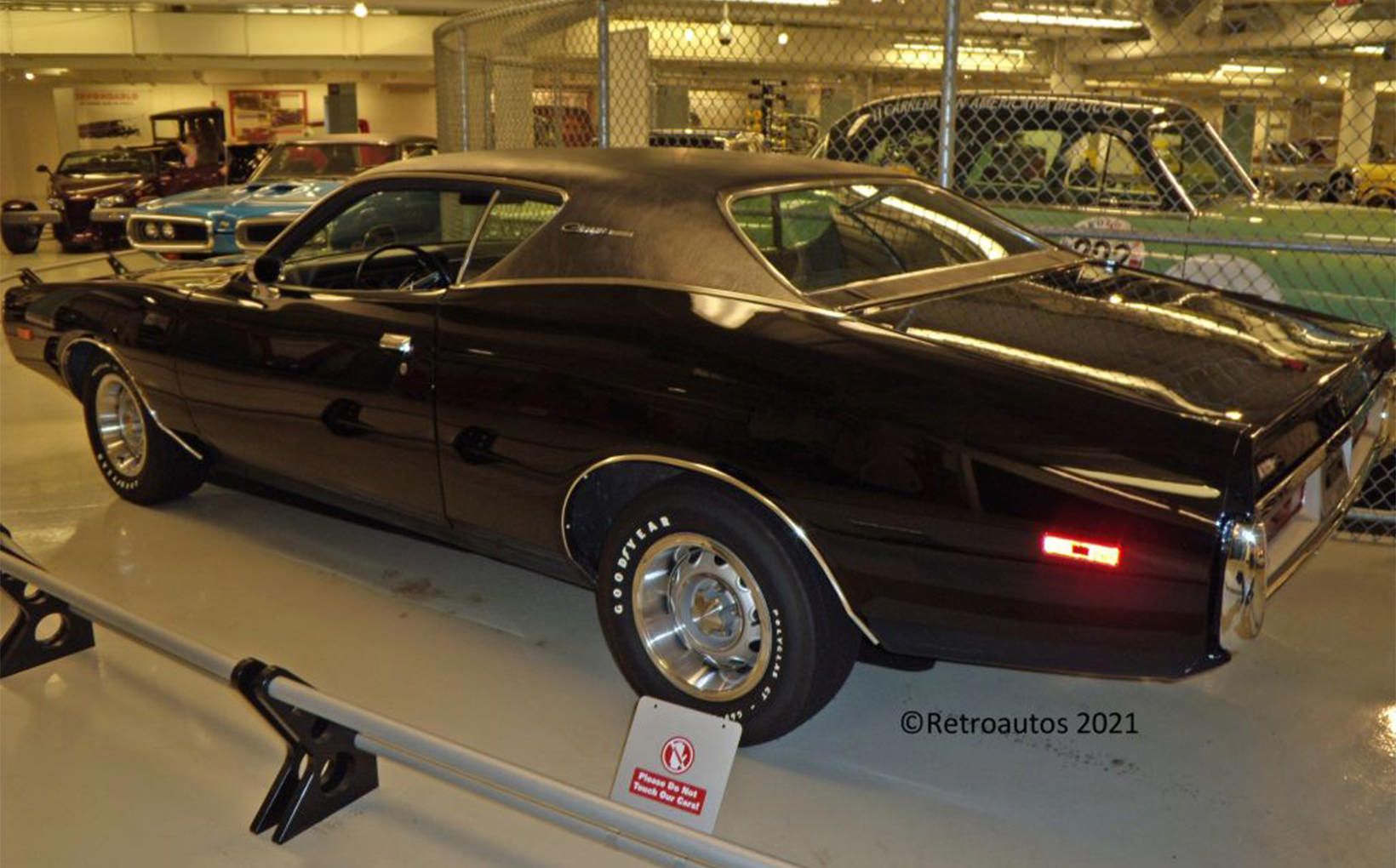 The side and rear of the 1971 Charger, seen here at the Chrysler Museum, takes its inspiration from the Charger III. 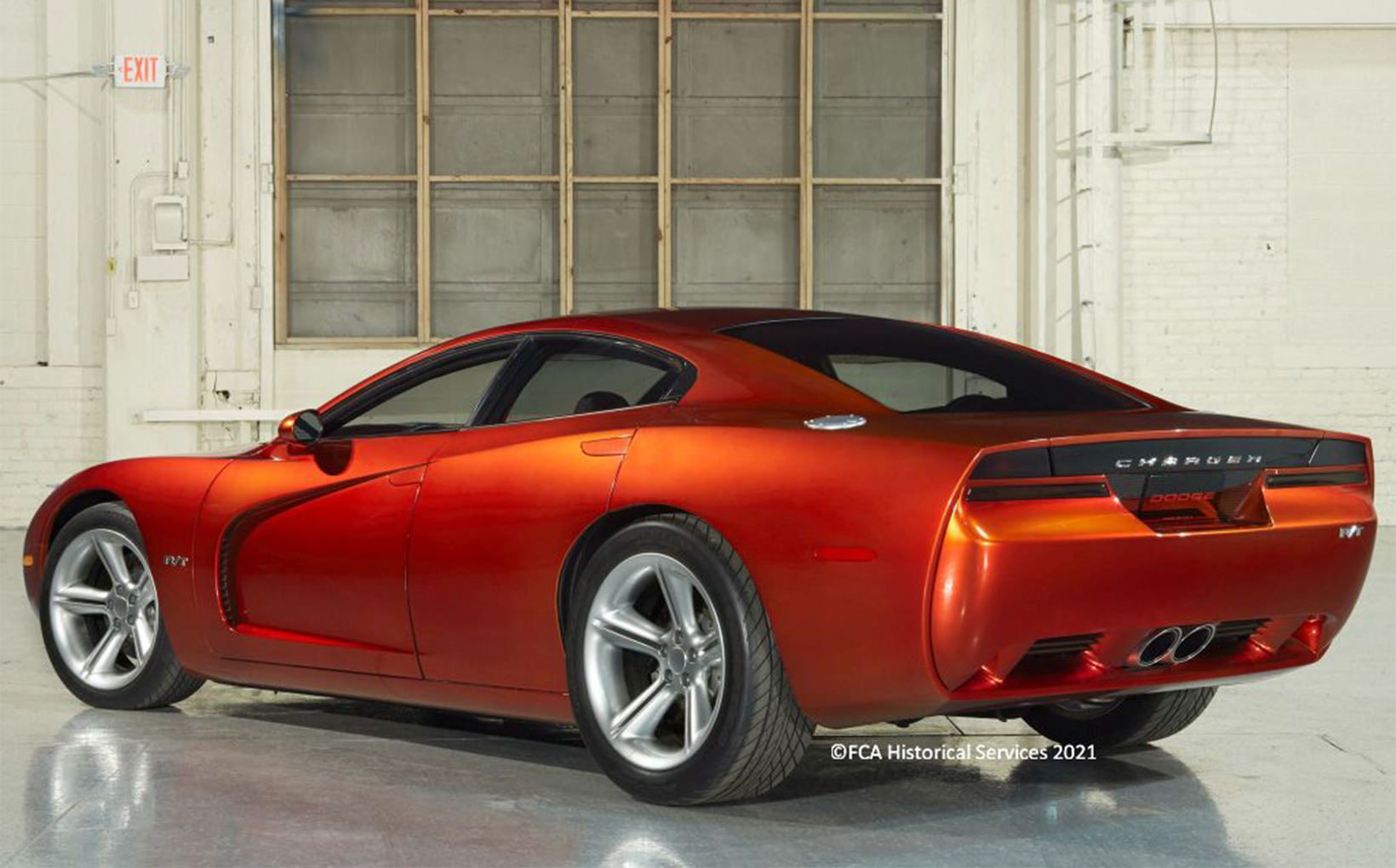 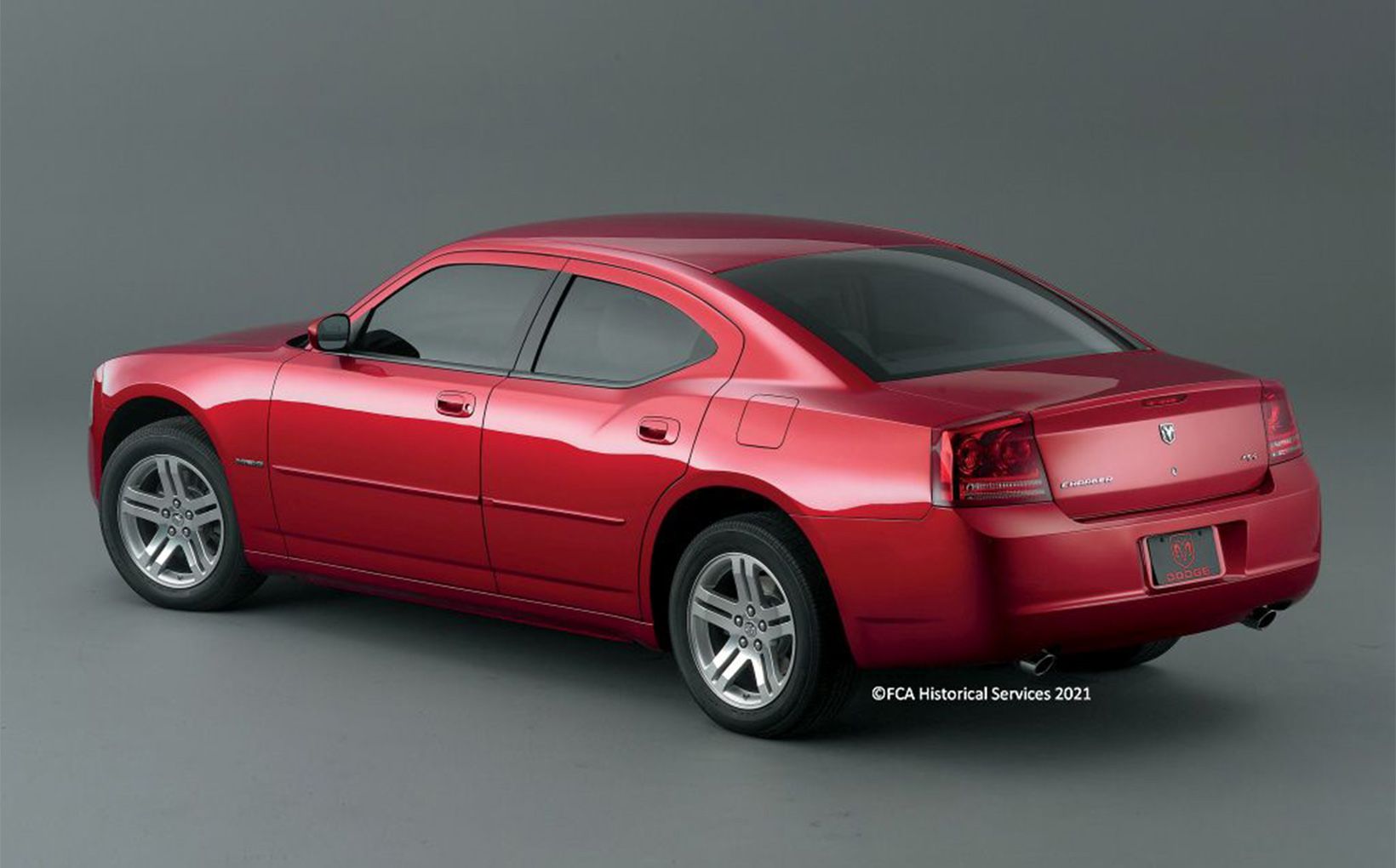 The Charger III’s styling motifs were reprised in the 1999 Dodge Charger R/T concept car and the 2006 Charger road car.

And as for the idea of a two-seater sports car to take on the Corvette? Well, that would have to wait until 1990 and the Dodge Viper.

The Charger I still exists. After its auto show and dealership appearance had concluded it was sold to a series of Chrysler dealers until dream/concept car collector Joe Bortz bought it in 1989 and had it restored. It has been auctioned a couple of times, fetching upwards of one million dollars.

The fate of the other two is unknown. Most likely they were crushed, as so often happens with these priceless automotive heritage objects.

Retroautos is written and published by David Burrell with passion and with pride. A special thanks to FCA Historical Services for images used in this feature.