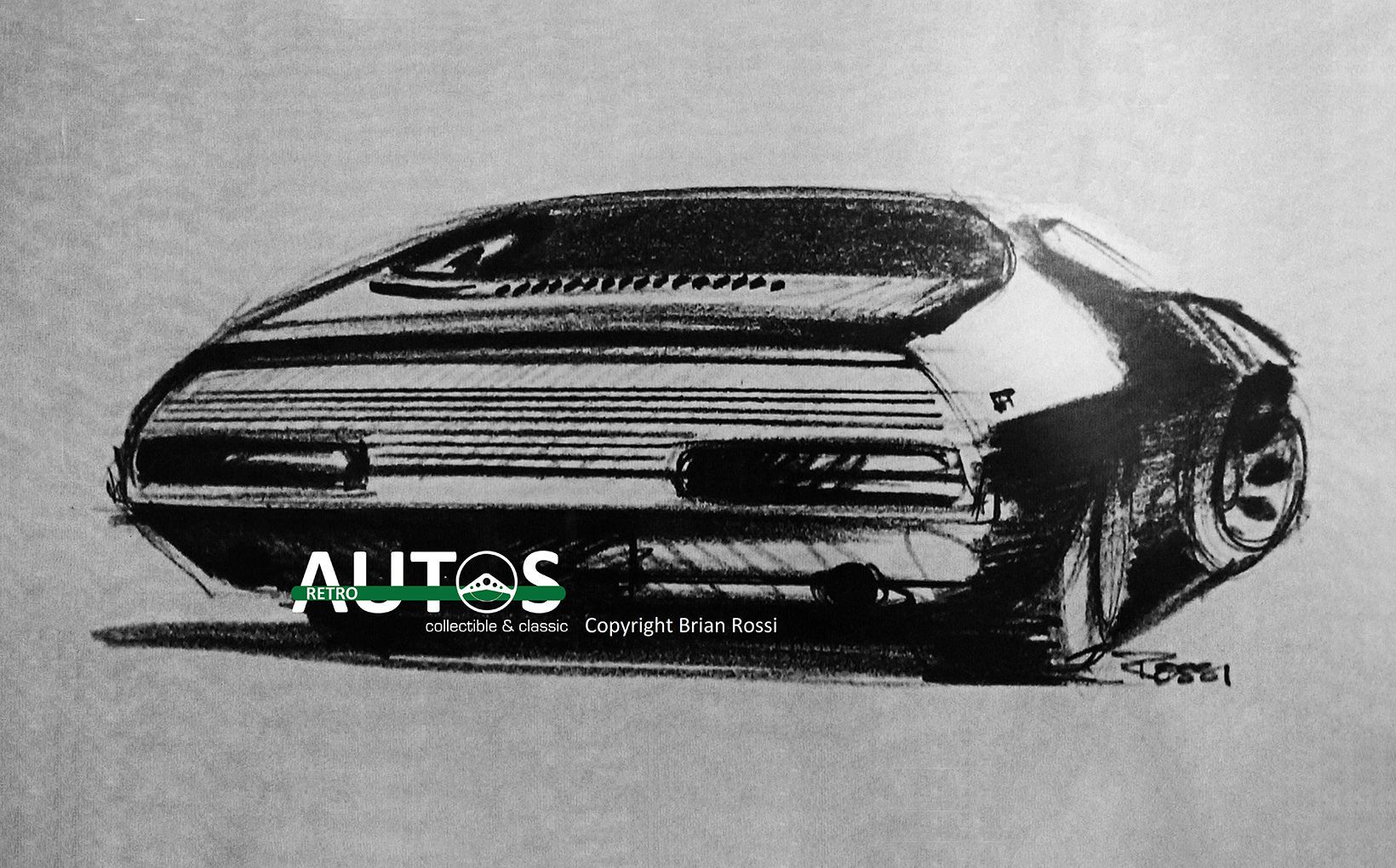 Automotive folklore says that the XA Falcon coupe was first imagined and drawn by Ford Australia’s design manager, the late Brian Rossi, in late 1968, on a table napkin while he was having dinner at a Melbourne restaurant with his boss, design director, Jack Telnack.

And like all folklore, there’s an element of truth in it. 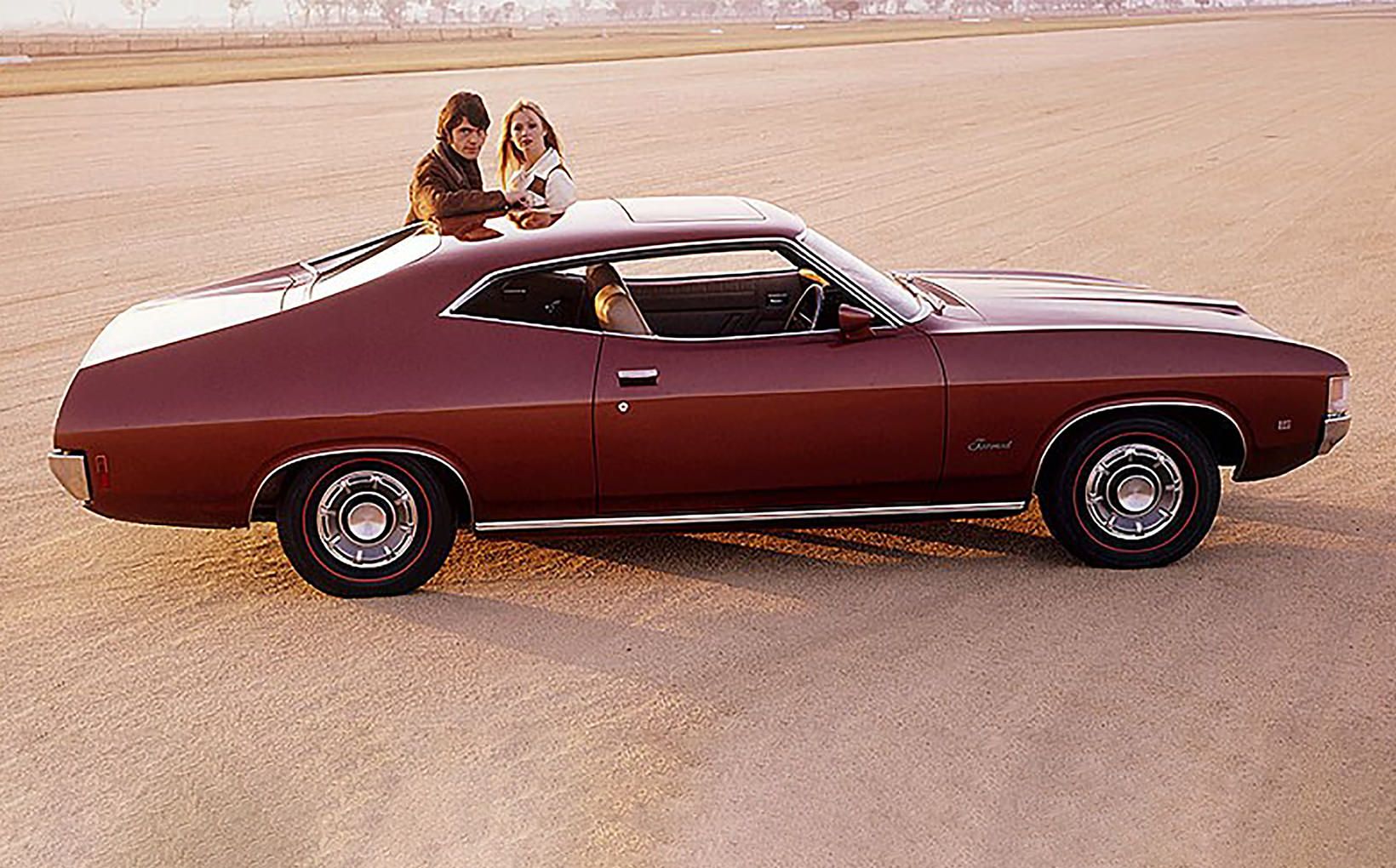 One former designer, from a rival car company, once told me that he considers the XA coupe to be one of the best local designs, ever.

In a series of chats with Brian in 2018 he explained to me what really happened.

“Jack and I were on a trip to Ford headquarters in Dearborn to update them on the progress of the XA sedan and ZF Fairlane. We had stopped off in Honolulu over the weekend and were staying at the Outrigger Hotel on Waikiki Beach. On the Saturday night Jack and I were having a drink in the hotel bar and we were talking about the coupe and I got my pen out and a piece of paper and sketched a rear three quarter view. And that’s what happened. That’s how it was designed.” 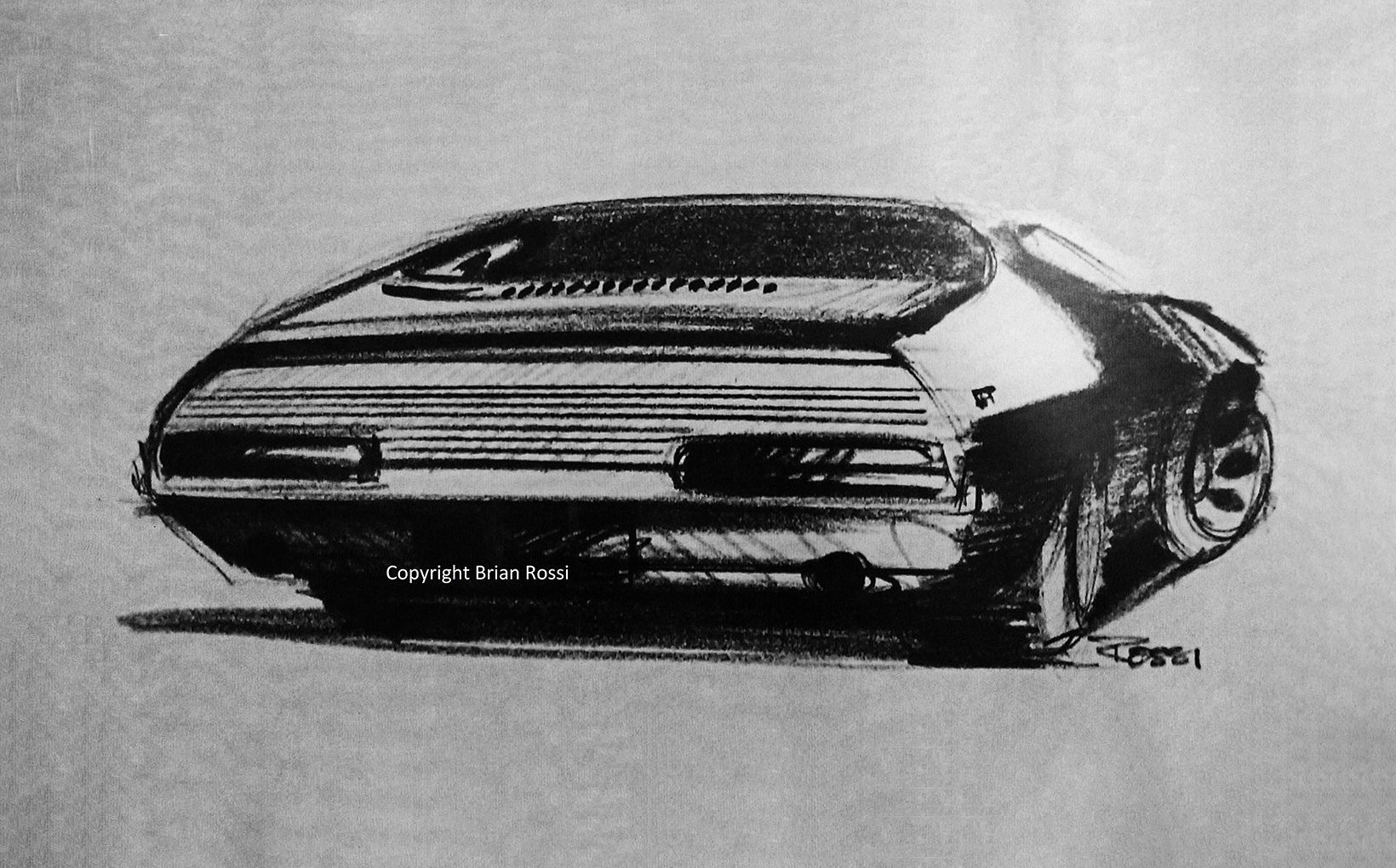 The late Brian Rossi kept the napkin on which he drew the first design proposal.

In the same way that Holden’s designers were able to convert the humble HK and HQ Holden sedans into svelte Monaros, and Bryan Smyth at Chrysler reshaped the VH Valiant into the Charger, Jack, Brian and their team were able to transform the XA Falcon four door into a tough and sleek-looking coupe. 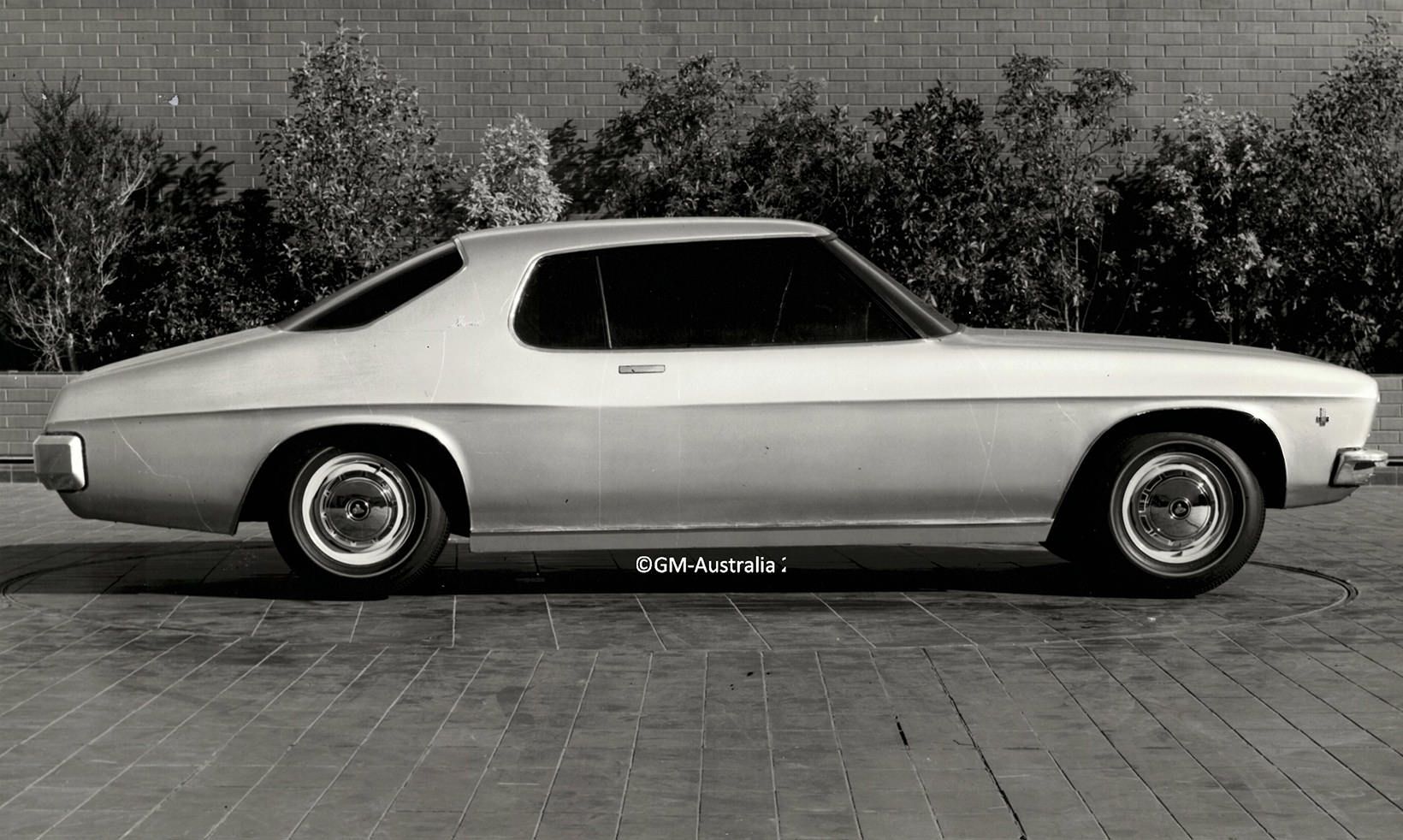 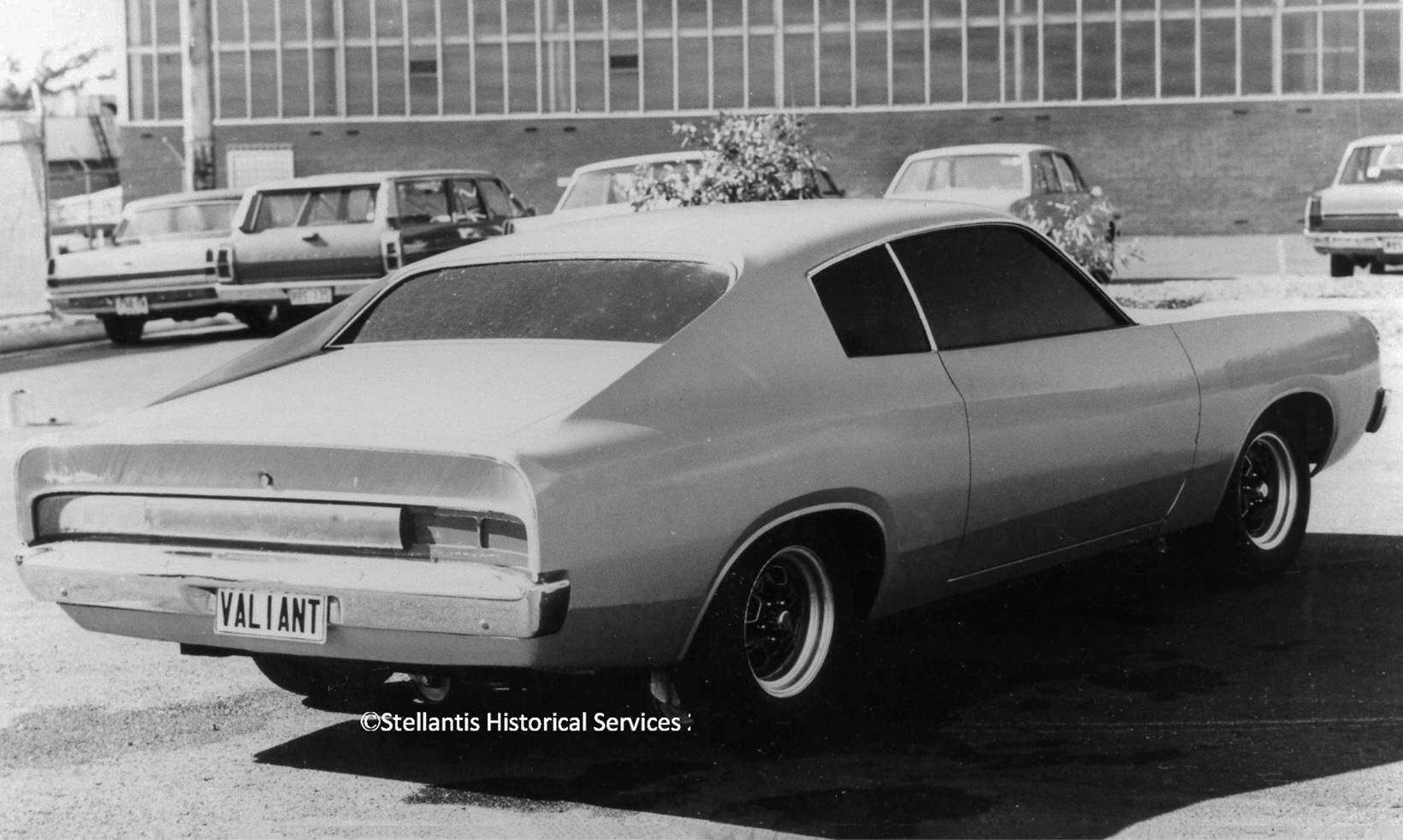 Clay models of the HQ Monaro and Charger coupes circa early 1970.

Ford’s XA Falcon coupe was released in August 1972, six months after the XA sedan and wagon and ZF Fairlane.

It was Ford’s first mainstream coupe offering since the XM/XP Falcon hardtop coupe had appeared eight years earlier. Promoted as a stylish “personal car”, but without a V8 option, the XM/XP two door appealed to a small niche of the market which resulted in less than satisfactory sales. Although Ford Australia could have picked up the 1966 America Falcon coupe and added it to the XR/XT/XW/XY Falcon range, the development of local commercial variants and the profitable ZA Fairlane took greater priority. Simply, there was no viable business case for a low volume coupe. 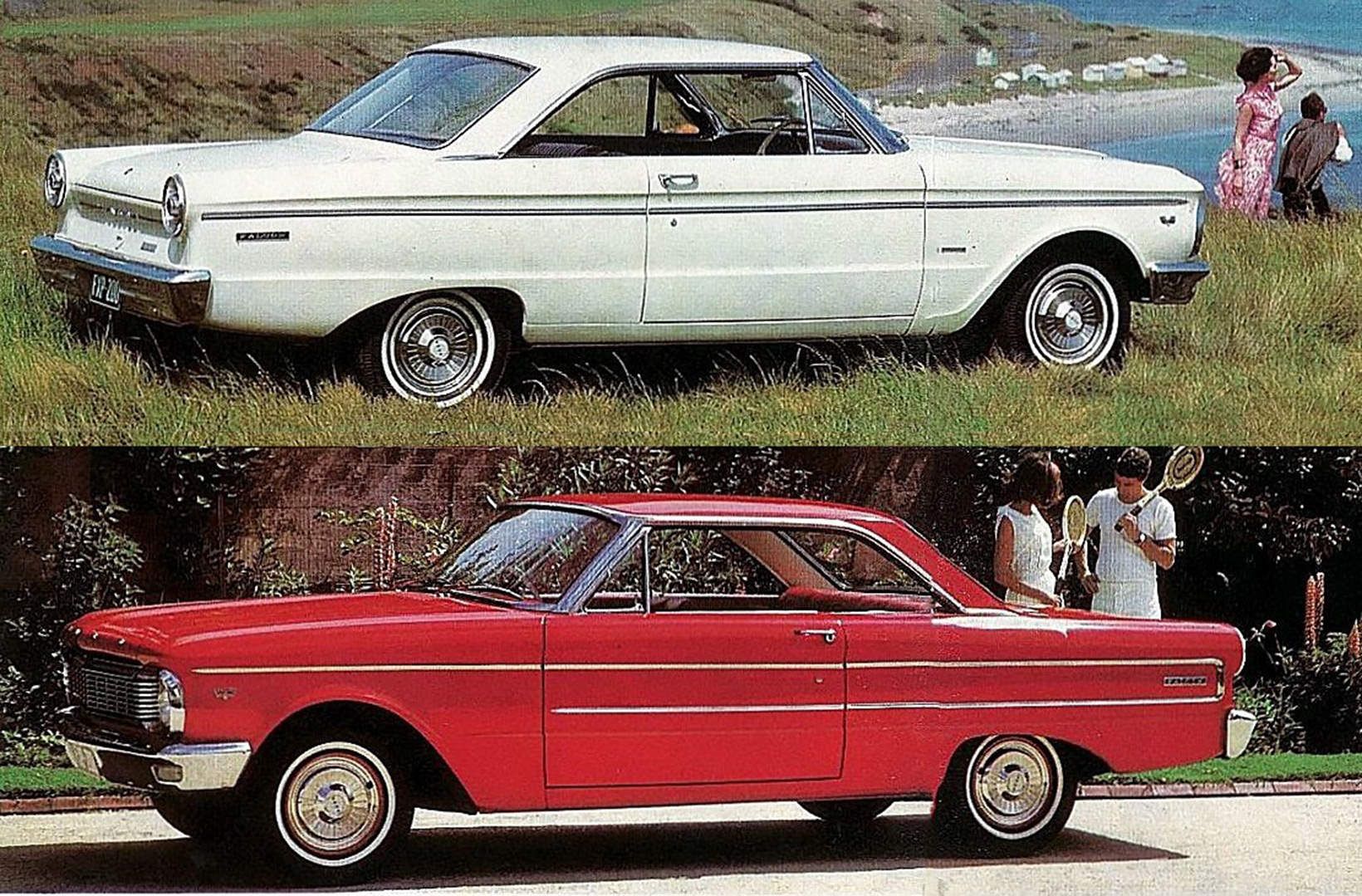 The conservatively styled XM/XP Falcon hardtop did not resonate with Australian buyers when released. Sydney speedway star, Bill Warner, did a great business replacing the six cylinder engine with the 260 and 289 cubic inch V8. He had Ford’s blessing.

Then came the HK Monaro. It appeared in July 1968 at the same time as the preliminary development work was being done on the XA Falcon. Its styling and sales success was not lost on those at Ford. According to Brian, Ford Australia’s managing director Bill Bourke was very keen to have a “hero” car to attract buyers into dealerships, and a coupe became part of the XA product plan.

The story of the design of the XA Falcon and ZF Fairlane is told in a recent edition of Retroautos. There is a link at the end of this story.

The Falcon and Fairlane shapes were signed off by September 1968 and that was when the styling team turned their efforts to the commercials, wagon and coupe. An important objective was to share as much as possible across the XA/ZF range to save costs. One outcome of this sharing was that the commercials and the coupe used the same frameless doors. 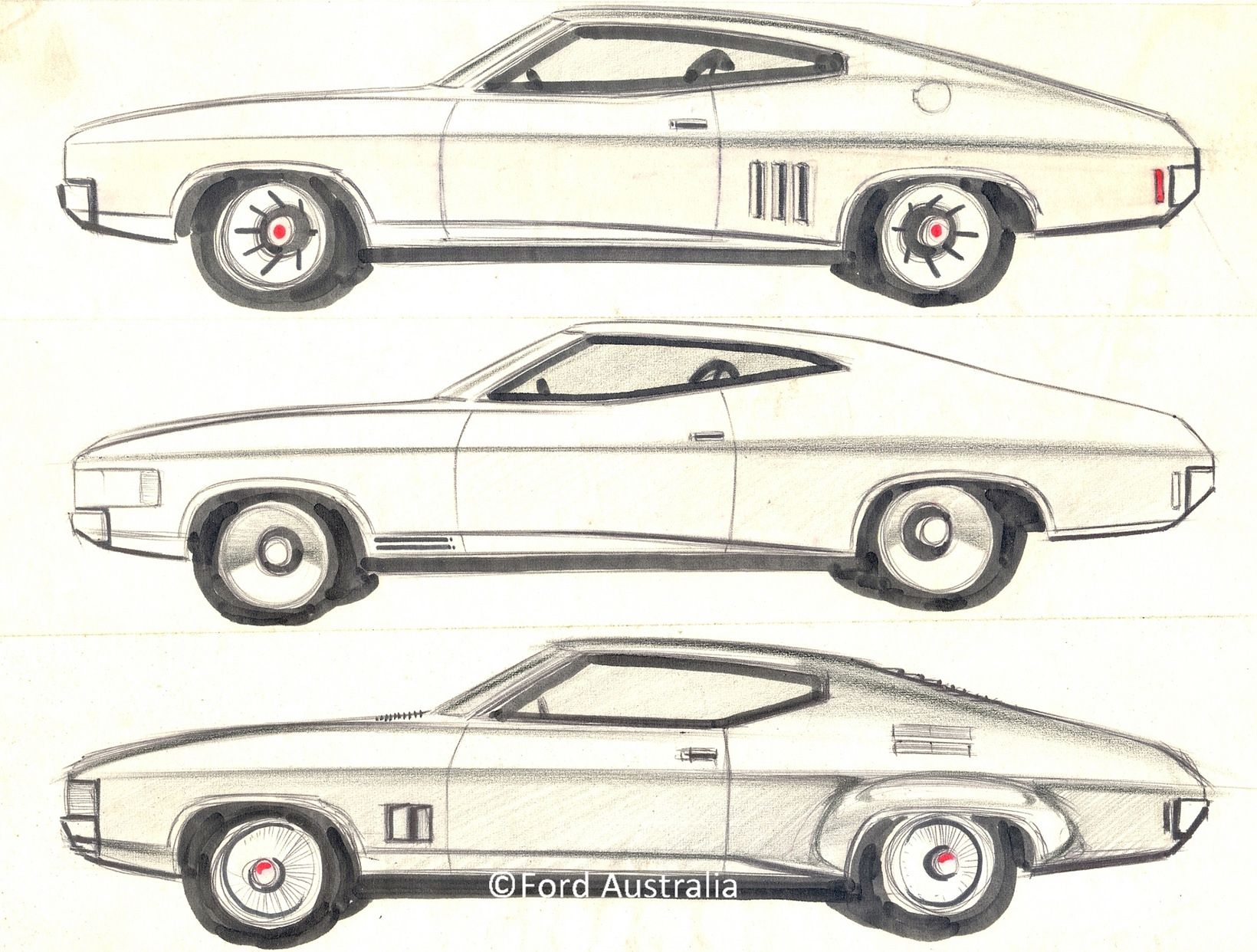 Brian Rossi’s quick sketches of styling ideas for the XA.

Brian led the design of the hardtop. He said that the styling process started as a series of sketches (based on the napkin drawing) before being transferred to a full-sized tape drawing and then to a full-sized clay model.

“We did a two-sided version of the clay model with different styling on each side, mainly the side window shape and belt line. Then we reviewed them and decided which one would be the main theme to go forward with, which we then refined.” Brian says. 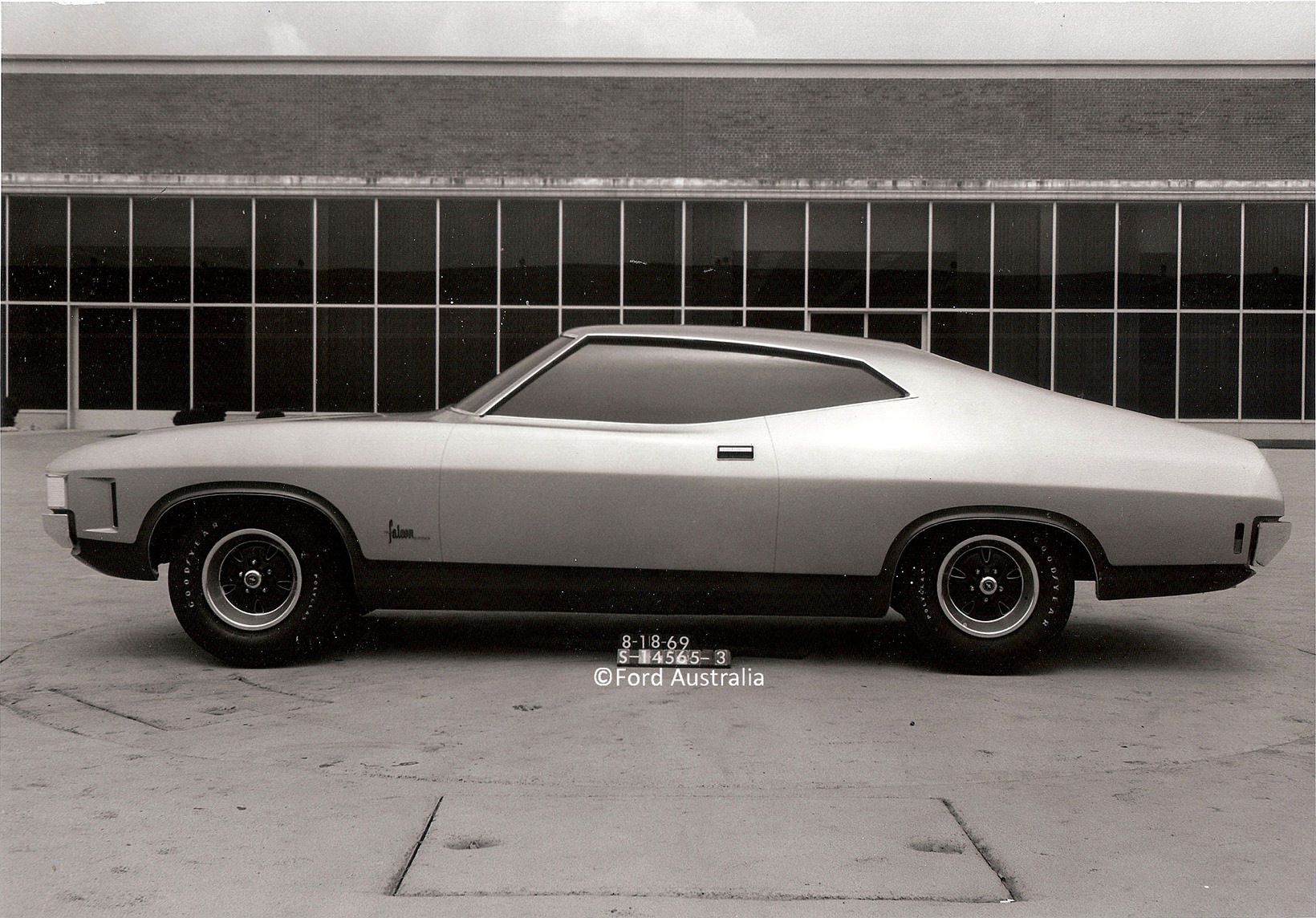 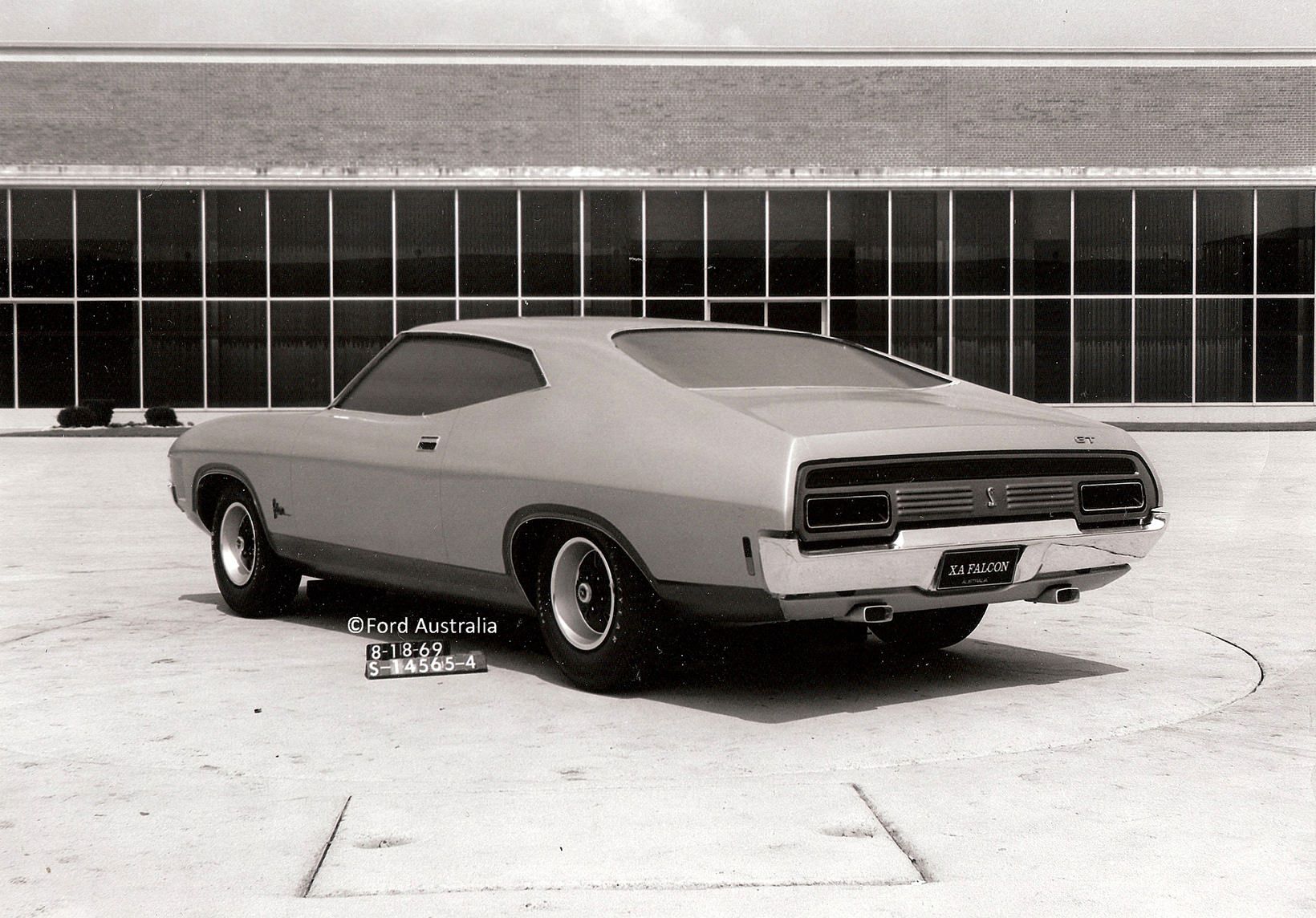 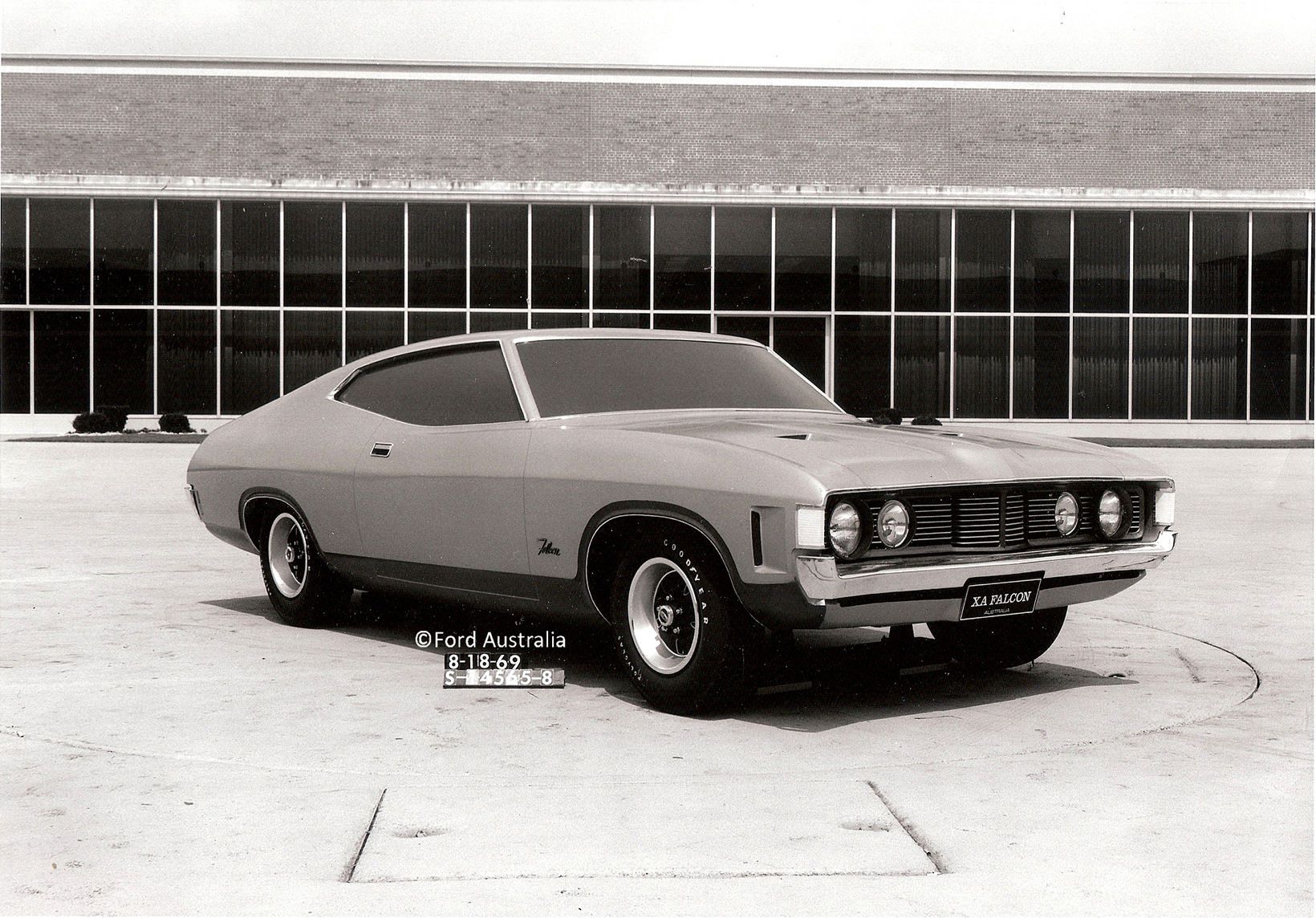 Although it is hard to identify on these 50 year old images, taken at Ford’s design studios in Dearborn, the right side this two sided clay model features the wider rear fender which went into production.

With the main styling themes agreed, the team created another clay model, this one was also two sided. It is at this point that the story of the car’s bulging rear fenders starts to emerge.

“We always had the impression that the coupe would only be a GT and have wider wheels than the sedan. We did not expect it to be a full range car. So, on one side we did a slimish rear quarter panel and fender design assuming that it would go into production. There was certainly enough room for the wider GT wheels and tyres with this design. But on the other side, we got a bit carried away, and did an exaggerated and even wider quarter panel and fender shape.”

Meantime, with sales of the full range Monaro climbing (this is still 1969) the product planners decided that the XA Falcon hardtop would also be a full range offering incorporating the 500, Fairmont, GS and GT. Brian revealed what happened next.

“We thought we could have two rear quarter panel and fender treatments, the wide ones just for the GT, and the slimmer ones for everything else. Cost considerations meant we had to decide on just one, and we all went with the wider version. And that’s how it happened.” 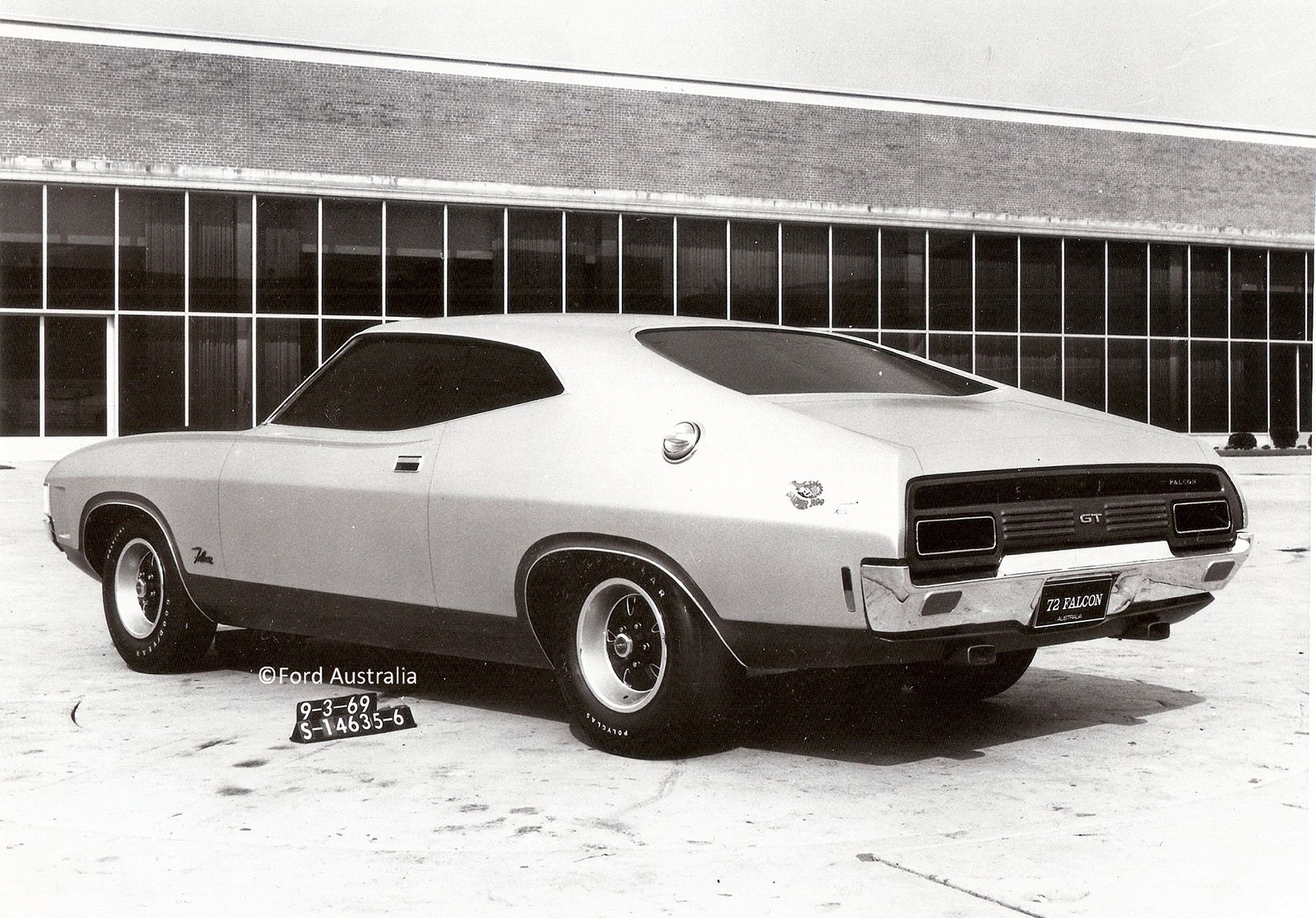 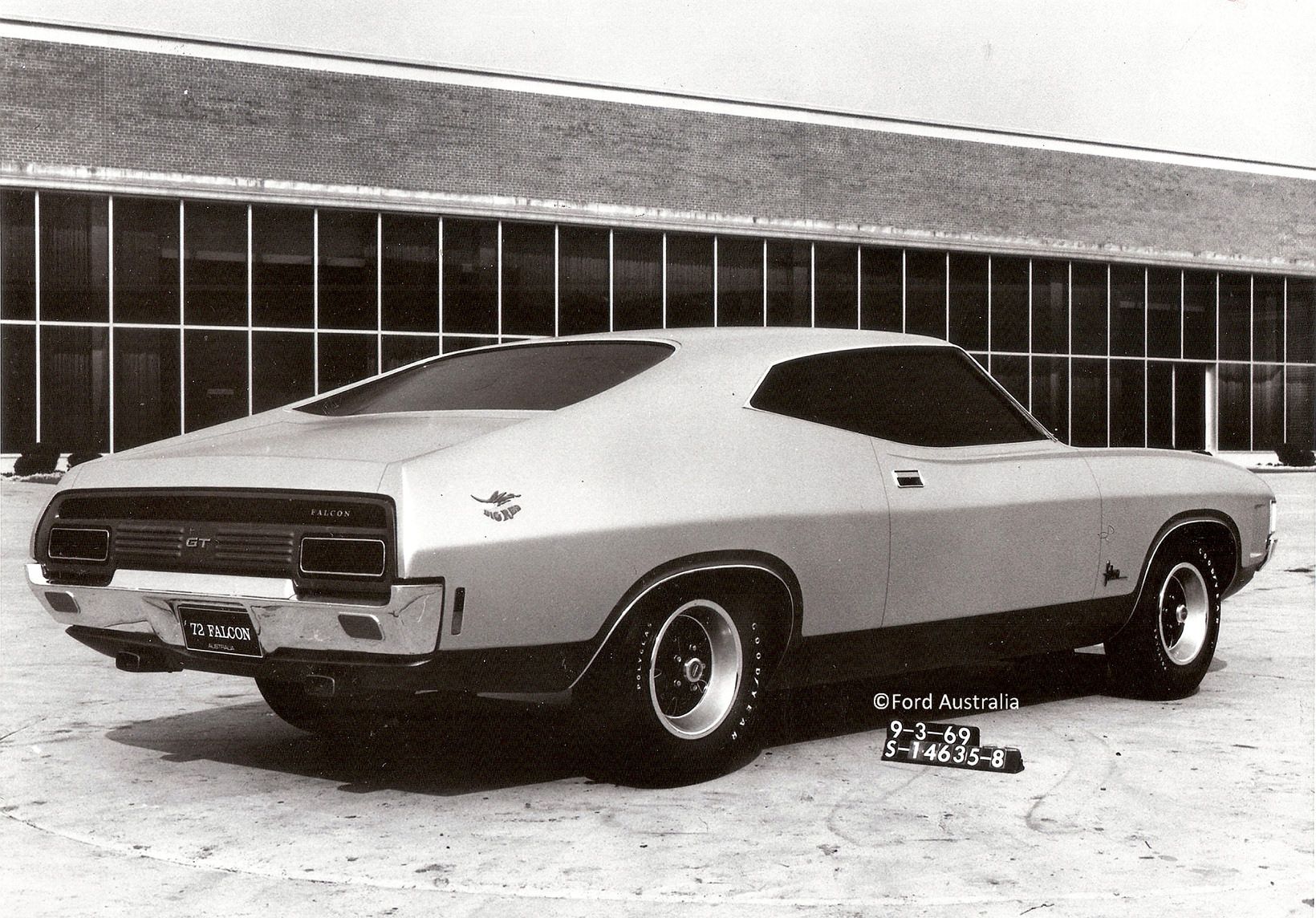 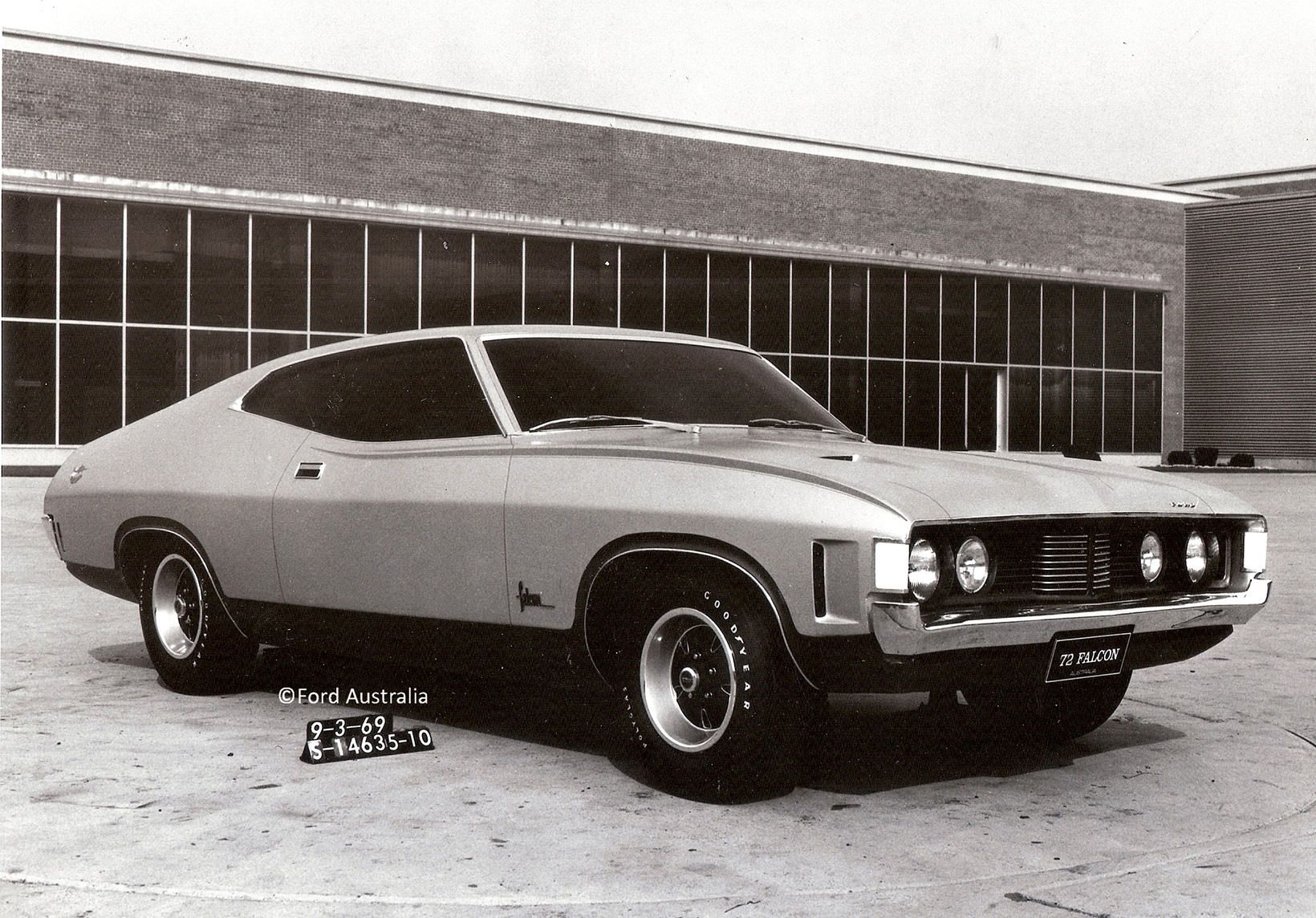 When these photos were taken on 3rd September, 1969, the design team were experimenting with the placement of the fuel cap, badges, decals and stripes. The grille design was also unresolved at the time. Note that the windscreen wiper arrangement is for a left-hand drive car.

A key design feature of the coupe was its large concave rear window. It was part of Brian’s original napkin sketch and Jack Telnack fought hard for its retention despite the complexity, cost and engineering difficulties it presented. To demonstrate how he thought the sheet metal surface could be manufactured, Jack crafted the supporting inner structures out of cardboard as part of his presentation of the coupe’s styling. 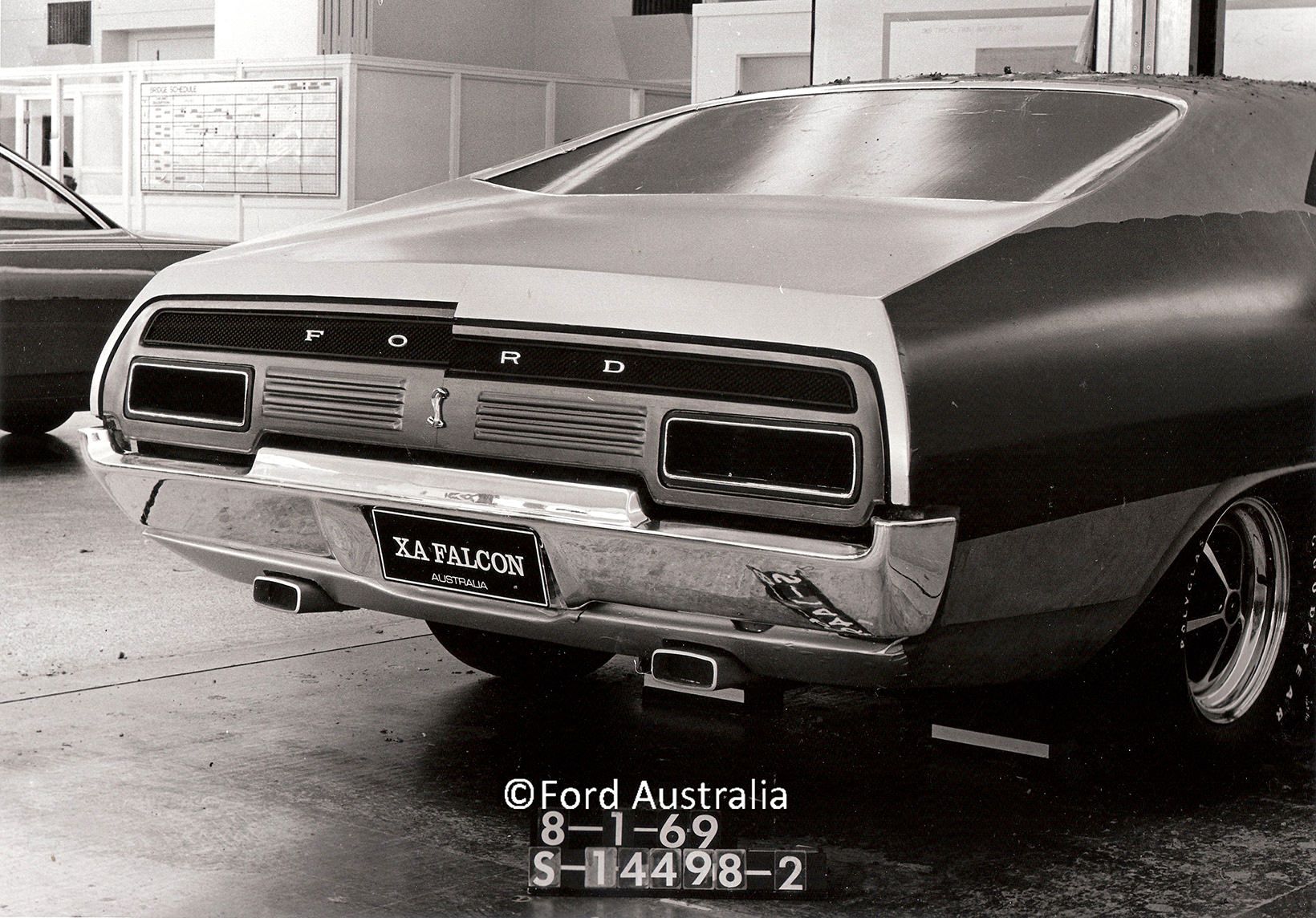 Two rear end proposals. The right side has a sharper end to the rear fender than the left side. Although the physical height of the rear end is the same across the car, the different blackout panel and striping creates a noticeable visual height contrast.

The XA was the last of the “Big Three” sedan-based coupes to hit the market. It had a wilful and hulking road presence compared to the smooth shape of the Monaro and sporty exuberance of the Charger. The Falcon coupe looked longer and lower than the Monaro. But, as with its sedan counterpart, the Holden was an inch/25.4mm longer than the Ford and almost the same measurement lower. 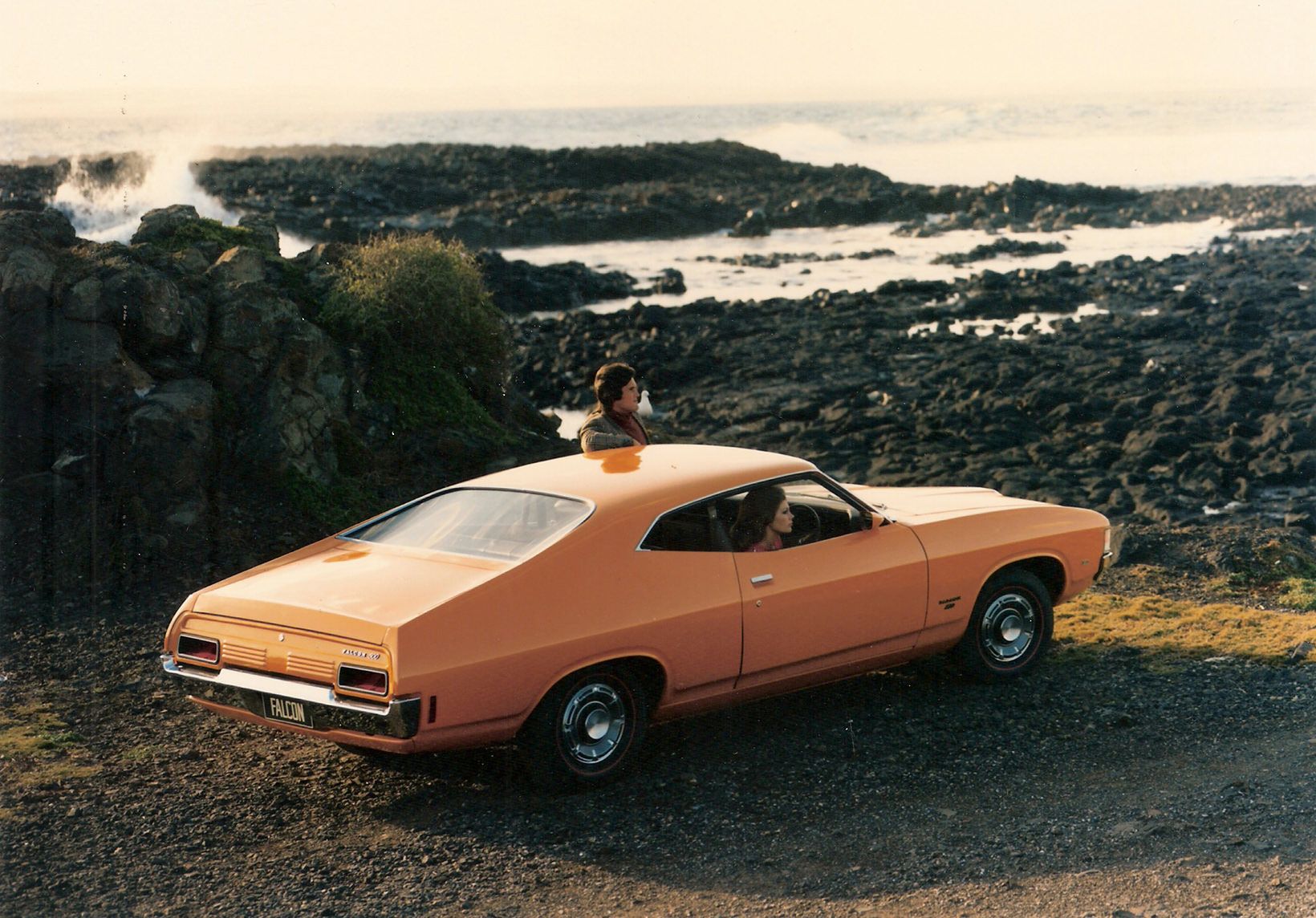 The Falcon might have looked bigger than the Monaro, but it was an inch/25.4mm shorter.

Despite the coupe winning at Bathurst in 1973, 1974 and 1977, with Alan Moffat scoring twice and John Goss once, sales were always problematic because the appetite for large two door automobiles was rapidly diminishing. Holden’s LX Torana hatchback, released in February 1976 pointed to a more practical and smaller alternative, as did the imported Toyota Celica, Datsun 240K and Mazda 929 hardtop coupes. Ford’s very affordable GS package meant that those wanting a stylish sporty Falcon could achieve this aspiration in a family friendly four door sedan. 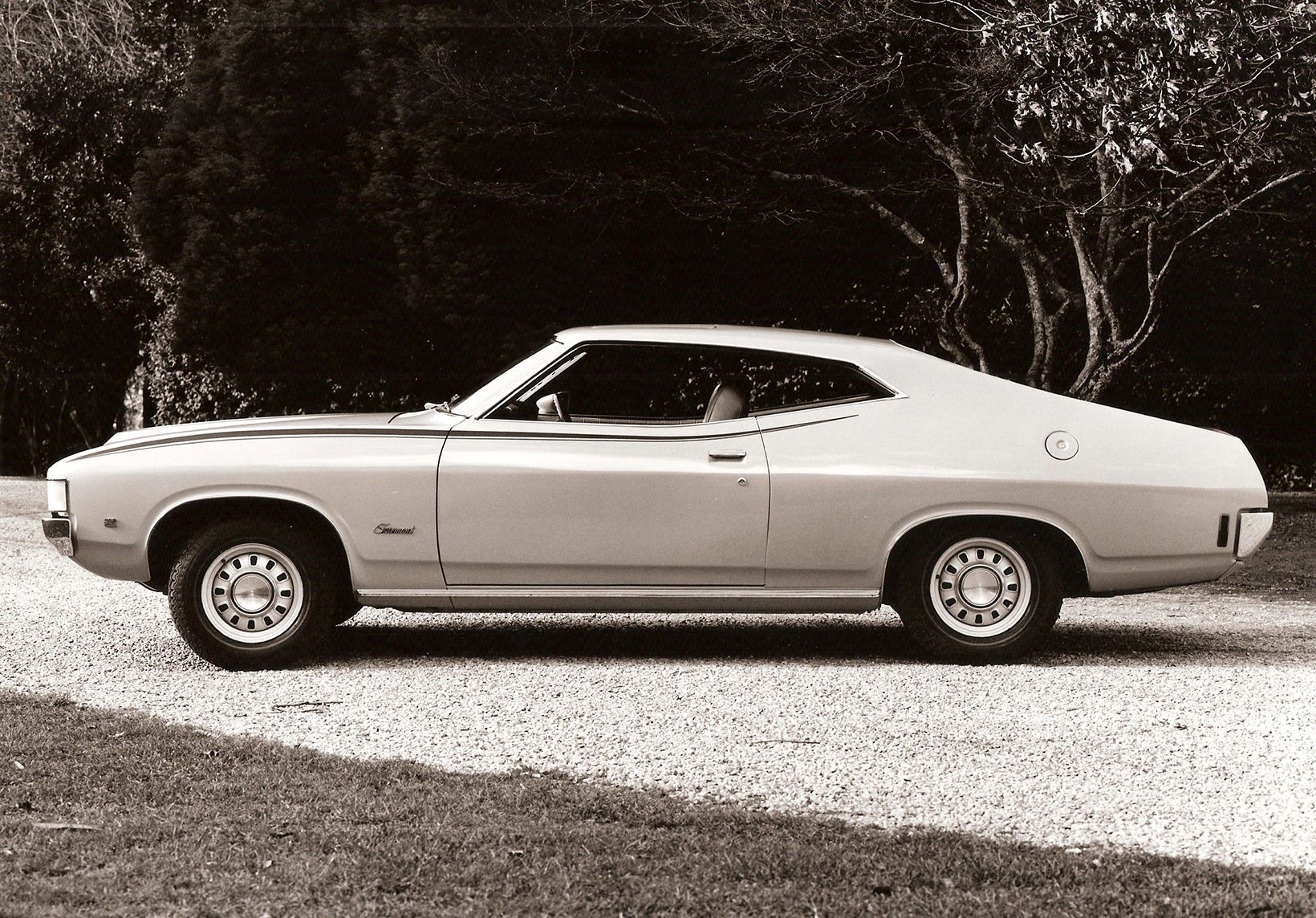 From design to driveway there was very little change in the profile of the XA coupe.

The Monaro coupe was taken off Holden’s sales list in 1975, with the 1976 LE being the last of the breed. Chrysler halted Charger production in June 1978. The Falcon coupe also disappeared in 1978, the final example being the Cobra special.

Ford sold around 22,000 coupes during its six-year production run, including 1385 of the luxury P4 Landau. Holden shifted less than 20,000 HQ-HJ-LE Monaro hardtops. The Charger went to almost 32,000 buyers, making it the sales winner of this category. 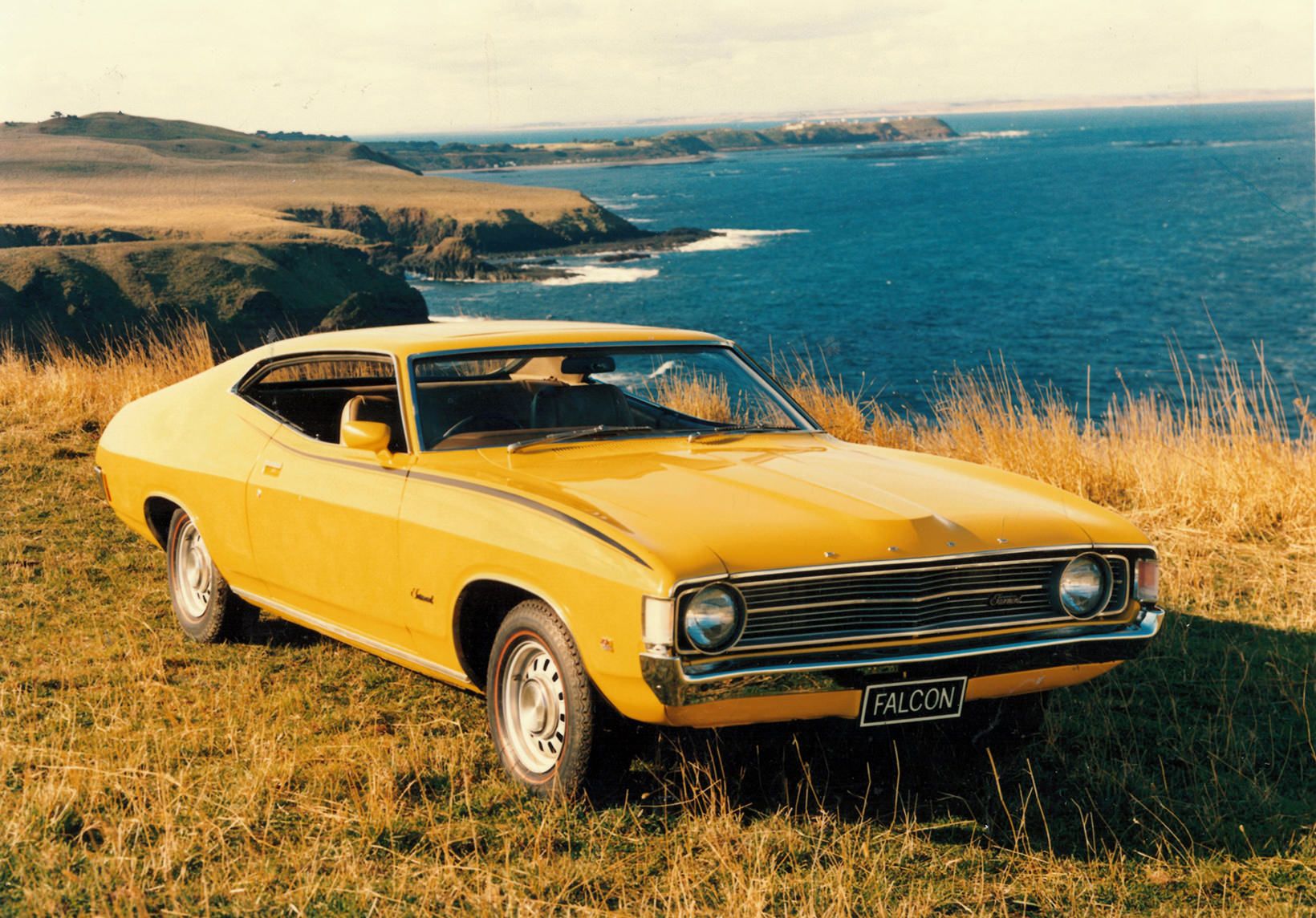 The standard narrow tyres only serve to emphasise the wide rear fenders.

So, what to make of the XA coupe and its successors on its 50th anniversary?

There is no getting away from the fact the coupe was a risk for Ford. Its sales were not spectacular but it paid for itself in other ways. The car’s racing success — remember the spectacular and dominant 1-2 Bathurst finish in 1977 — delivered considerable publicity and helped generate the showroom traffic that Ford’s dealers converted into sales of the sedan and wagon. 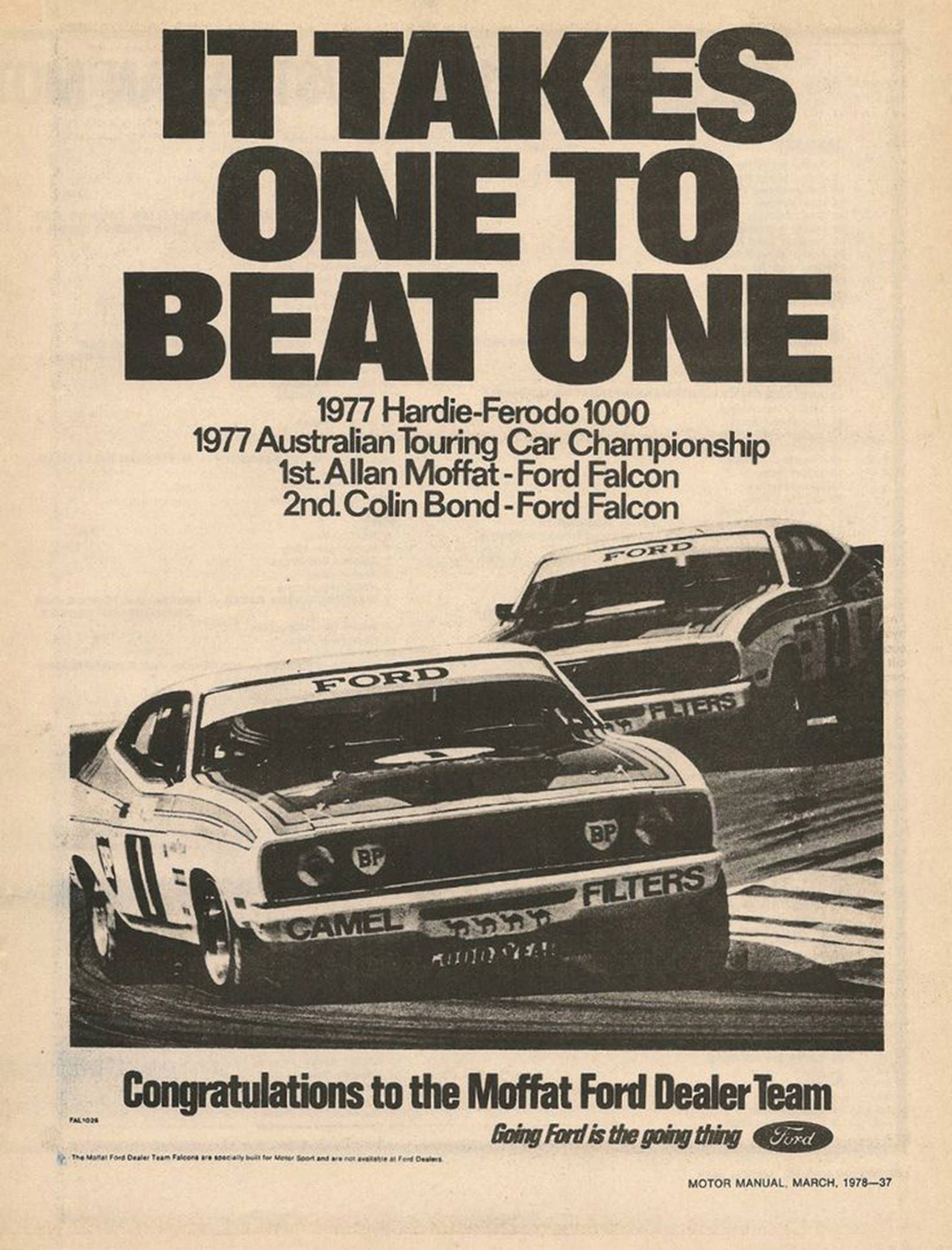 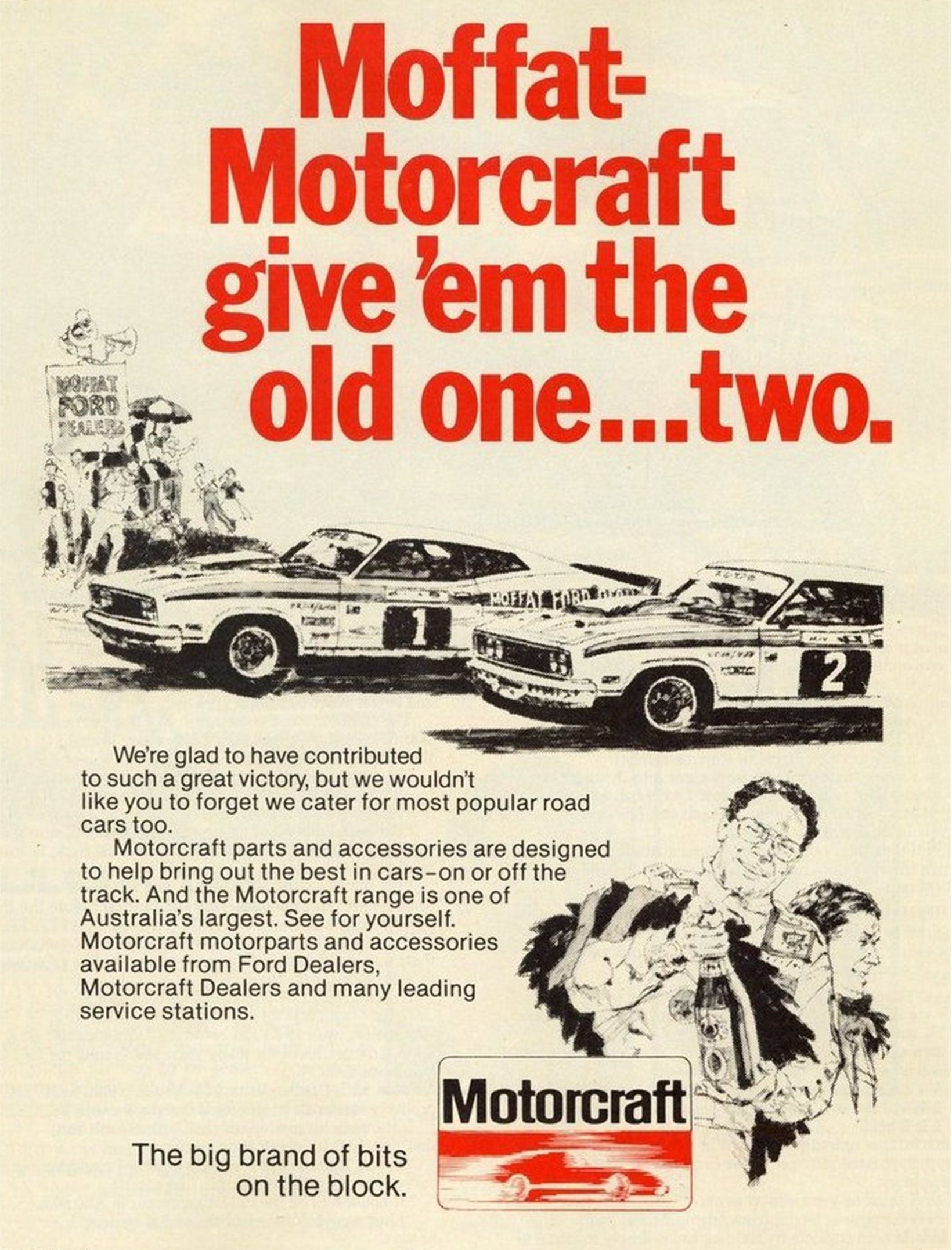 Ford was not shy in publicising the 1-2 Bathurst finish.

Retroautos is published with passion and with pride. This story is dedicated to the late Brian Rossi who generously shared his recollections. A special thanks also to Jack Telnack for his insights and hospitality. The Retroautos logo, stories and images are copyrighted. Reproducing them in any format is prohibited.