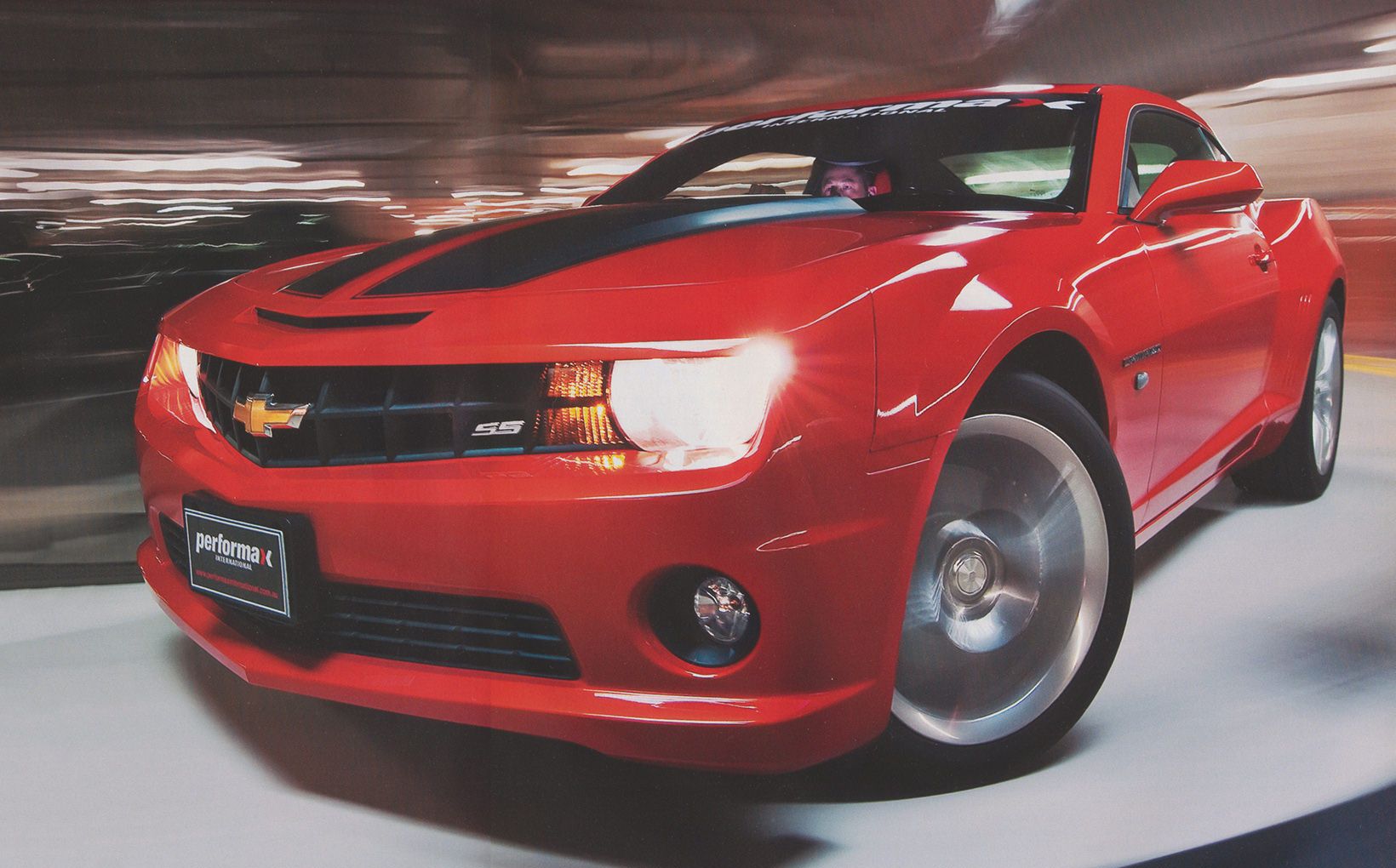 DO NOT flick to the final paragraph to read the conclusion.  Yes, this is the exclusive first Australian drive of a right-hook Chevrolet Camaro, the closest thing Aussie fans have to the much lamented Monaro.  Given, this and the face GM vice president Bob Lutz recently declared a right hook Camaro was most definitely on the cards, you’re understandably eager to get the Wheels verdict.  So allow me to save your fingers a walk by declaring right here and now that the Camaro is without peer in the world of Zeta-based performance cars.  Better than an SS v; better than a Clubsport; better than a GTS; better.  Full Stop.

We knew the Australian-designed and developed Zeta platform beneath the VE Commodore was good, but now, having driven a car developed from the group up with the focus on performance as opposed to practicality, we realise it borders on greatness.  So good, in fact that it makes you wonder just how much better a VE-based Monaro, designed and engineered in Australia by Australians for Australians might have been?  Sadly, the question is unlikely never to be answered, but at least this right-hook Camaro provides solace.

I wasn’t even a twinkle in my father’s eye when the original Chevrolet Camaro made its world debut in September 1966.  But I was front and centre with the fifth and latest iteration of Chevrolet’s iconic Pony Car galloped into Detroit’s Cobo Hall on January 6, 2006, to steal the thunder at that year’s North American International Auto Show.

At the time, ‘old’ GM was staggering through the global economic storm like a punch-drunk heavyweight in the final round of a fight it had already lost.  Into this climate Chevy rolled out the bold Camaro concept, driving through the show crowds for maximum impact.  The perennially-tanned Bon Lutz sat behind the wheel, dipping the clutch and punching the throttle with cherubic delight; his grin growing wider with every revolution of the 6.0 litre V8 and every cheer from the parochial American audience. 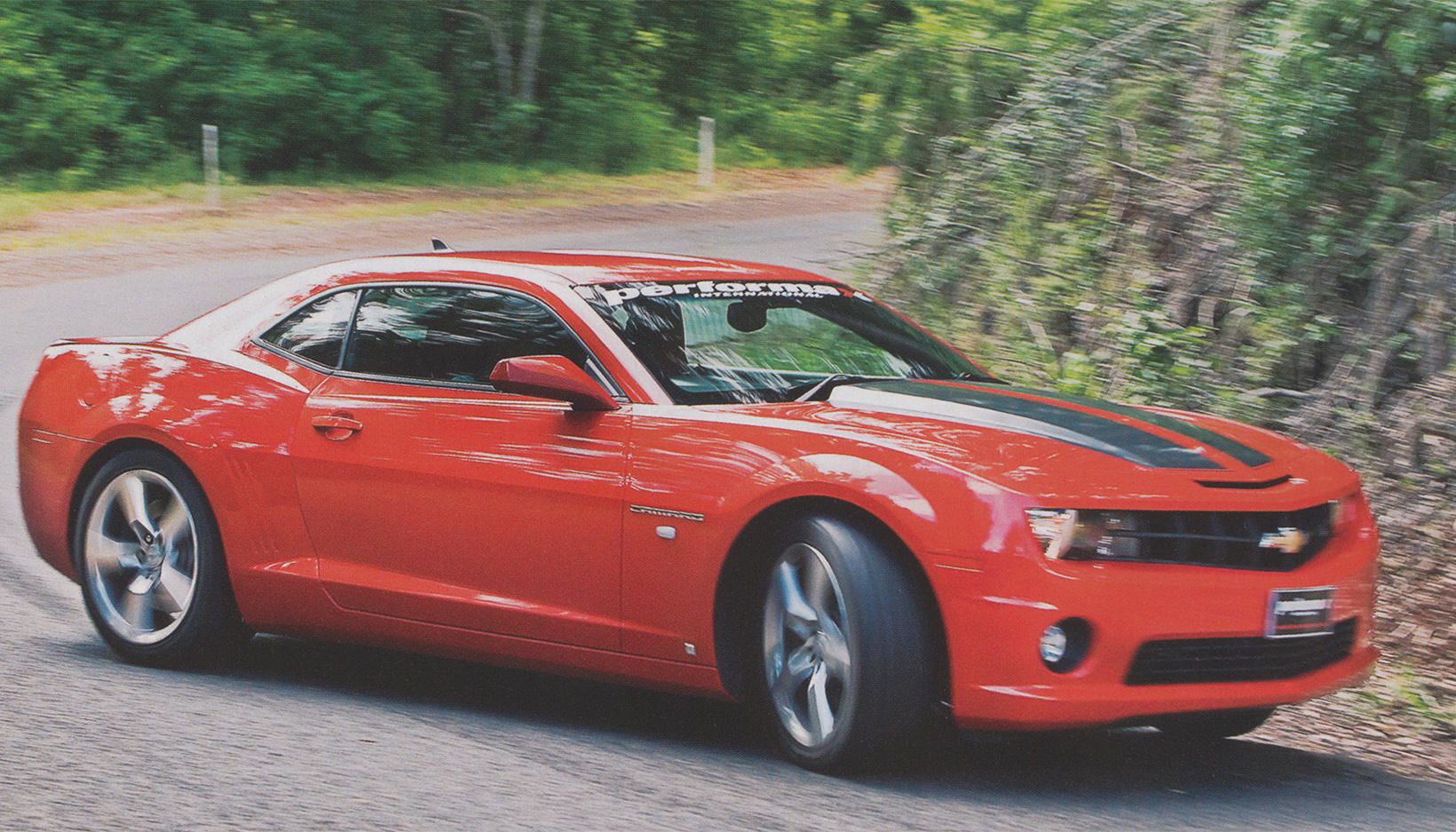 Camaro grips bettter than an HSV GTS, but the transition from grip to slip isn't quite so predictable.

At the time, the little green Al Gore on my left shoulder thought his new concept car an apt poster-boy for America’s myopic malaise; instead of bolding stepping into an enviro-future, GM was grasping vainly for a reborn pony car to ride to redemption.  But on the other shoulder, the little red fellow with horns and a GT stripe down his back didn’t give a fig.  The unabashed car enthusiast in me wanted to shoulder Lutz out of the Camaro and race the rev limiter to the horizon.  Today, four years later, I finally get that opportunity.

Wheels is in Queensland to drive the first road-ready, right-hook Chevrolet Camaro in Australia.  And, no thanks to Holden.  GM’s Australian subsidiary is yet to publicly commit to the Camaro (see breakout, page 50), which leave a window of opportunity for aftermarket companies skilled in RHD conversions, like Performax International, which supplied the car you see here. 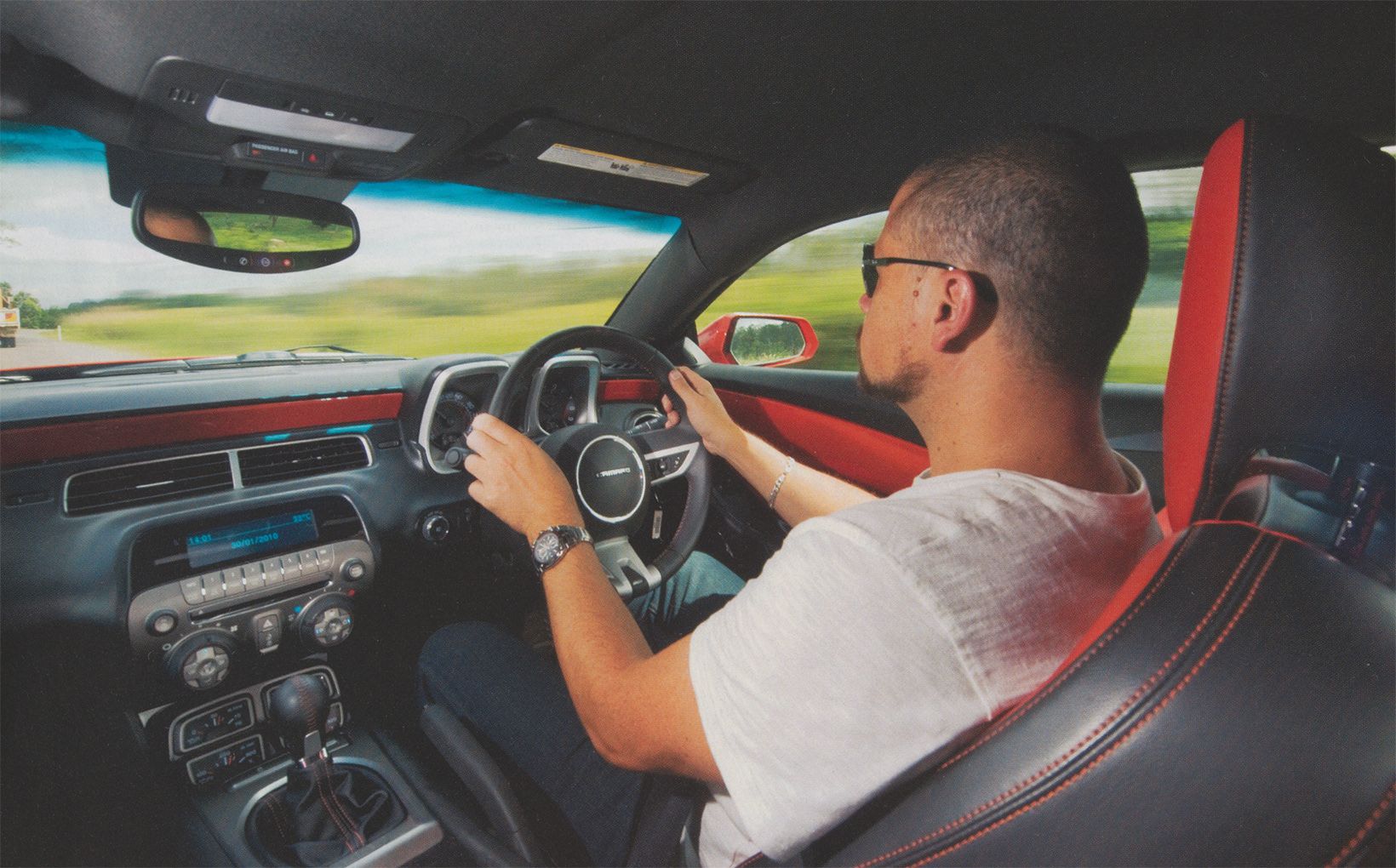 Some niggling detaisl aside, Camaro's interior is a fine effort. Butler's beard, however...

The pony car’s high bonnet and low roofline define the coupe’s sharp silhouette and reduce the windscreen to a letterbox slot.  At 4836mm from tip to tail, the Camaro is 152mm shorter that an HSV GTS, but 19mm wider and with a roof slammed a further 81mm closer to the Earth.

This particular version is a North American SS spec, top of the totem pole and powered by the same 6.2-litre LS3 V8 as out GTS.  It lacks the GTS’s bi-modal exhaust, so produces 7kW less, at 318kW, but with 569Nm on tap, it out-grunts the HSV by 19NM.  As with the GTS, the Camaro channels ito mojo via a Tremes T6060 six-speed manual transmission, mated to a slightly taller 3.45:1 final drive.

That the Camaro weighs 88kg less than the GTS is cause for some delicious anticipation.  The other big difference?  Well, this one’s going to hurt, since American pay around US$34K to put a Camaro SS in their driveway.  The one we’re driving has a Boston premium sound system, Inferno Orange leather and those big black stripes, taking the ask to US$36,00, or about A$40,000.  HSV’s GTS is twice that, which settling this locally converted version in your driveway will cost close to $140K.  Ouch!

Sliding into the deep leather bucket, I’m immediately aware of how low I’m sitting, and how high the dashboard and bonnet are.  I can’t see the road for at least a car-length in front.  There’s no seat-height adjust, either – that’s on the passenger seat, which was the driver’s seat in this originally-LHD car.

But despite the low roofline, headroom is decent.  An exposed body-coloured swathe wraps across the dash, running from one door to the other.  It’s a nice touch and is further enhanced by a strip of subtle upper-edge mood lighting that looks super cool at night.

The steering wheel is classic American muscle-car, deep-dished and chunky, while the retro-inspired instrument binnacle houses a speedometer (Canadian-spec, so it in km/h) on the left and the tachometer on the right.  Ancillary gauges for battery voltage, coolant, oil and transmission temps sit in a back ahead of the gear lever and below the centre stack.  All very American Graffiti.  The centre stack also betrays something about the economic turbulence GM was encountering as Camaro gestated from concept to production.  Despite this being the top-spec model, there’s no climate-control, just one dial graduating between hot and cold; a second for fan speed.  Above that sit the stereo controls, topped by a monochrome display – the same one used in the Holden Cruze.  Further investigation turns up the Cruze’s indicator and wiper stalks, and its headlight dial.  I know economy of scale across various model lines is vital these days, but still…

All thoughts of penny-pinching evaporate as the 6.2litre V8 fires into life, settling down to a 700rpm idle that isn’t quote Commodore-smooth.  Every few seconds, the car shakes a little, as though to contain the explosive energy within.

A short transport stage brings the first of a number of surprises: the Camaro rides bloody well.  It feels no firmer than a Commodore SS, and is almost as good at soaking up bumps.  There steering wheel is light, almost effortless, yet there’s a softly transmitted feel for the road that makes me wasn’t to teleport instantly to the mountain stages and unleash the little red fella.  The transmission’s short-throw shift is generally good, but proves reluctant to slot cleanly on occasions. 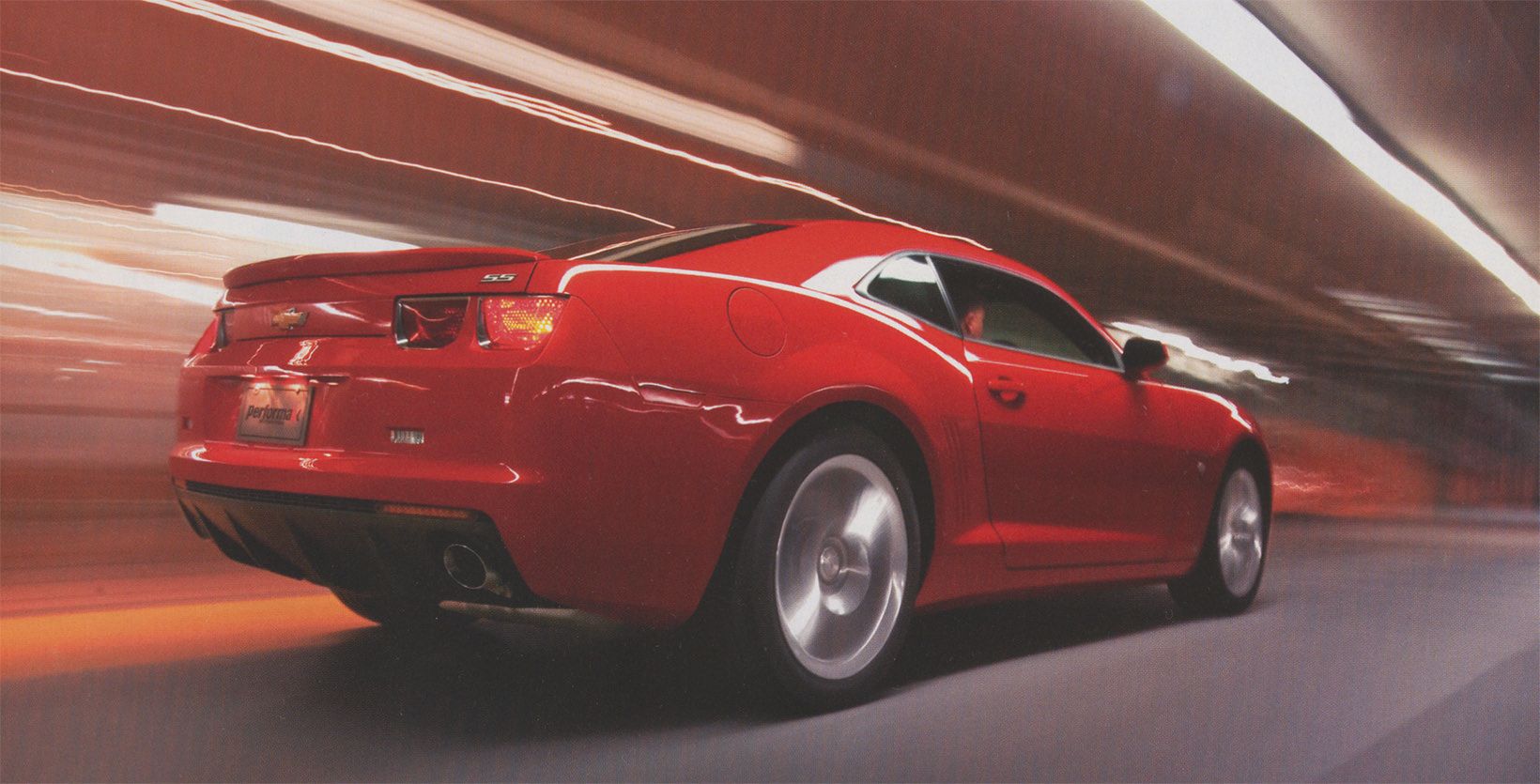 Cruising at 100km/h in sixth the Camaro feels superbly relaxed, its tacho registering a lazy 1400rpm.  There’s a reasonable amount of road noise from the 20-inch Pirelli PZero rubber but that only helps to smother the boominess of the exhaust, which tends towards the irritating on long stretches.  Fortunately, there’s a solution readily at hand and slotting the shift back to fifth reveals a deeper, more attractive, brassy thrum.

I’m relieved to find there’s none of the dreadful ‘wafting’ suspension Americans apparently demand in their cars.  I’ll only know for sure once we get serious, but the early signs are good.  The Camaro feels sorted.  I’m also noticing a lot of traffic in orbit around us.  Drivers match out speed so they and their passengers can ogle the hot orange coupe.  One bloke mouths “cool car” as he rolls by; a teenage girl gives us the thumbs up; and the occupants of a V8 Commodore ute take a good, long look before flooring it into the distance.  Knowing that Wallopers in the Sunshine State have become as zealous about revenue raising as their Victorian counterparts.  I resist the urge to give chase, but only just.

Veering off the main road, we lose our orbiting satellites and warp into another world.  Down through the gears; fourth then third then….fourth…what the? Try again.  Second.  Now the tacho’s getting busy in the upper reaches of its 6600rpm range.

Throttle nailed, the Camaro kicks like a brumby, using every bit of grip available by its 275/30R20 rear rubber.  There’s little squat and only a slight lift of the nose as the LS3 unleashes its full force.  The car thunders out of corners, its velocity escalating more ferociously than my memory says GTS can.  Indeed, this feels like a whole new level of Gen IV bent-eight fury, lending credence to Chevy’s claim of sub five-sec 0-100km/h.  Throttle response is excellent, with plenty of grunt from as little as 2500rpm, the engine displaying impressive immediacy and thrust.  But it’s only when revs climb above the mid-range that the engine note truly matches velocity, the 6.2litre V8 sounds even crisper and angrier as it nears redline. 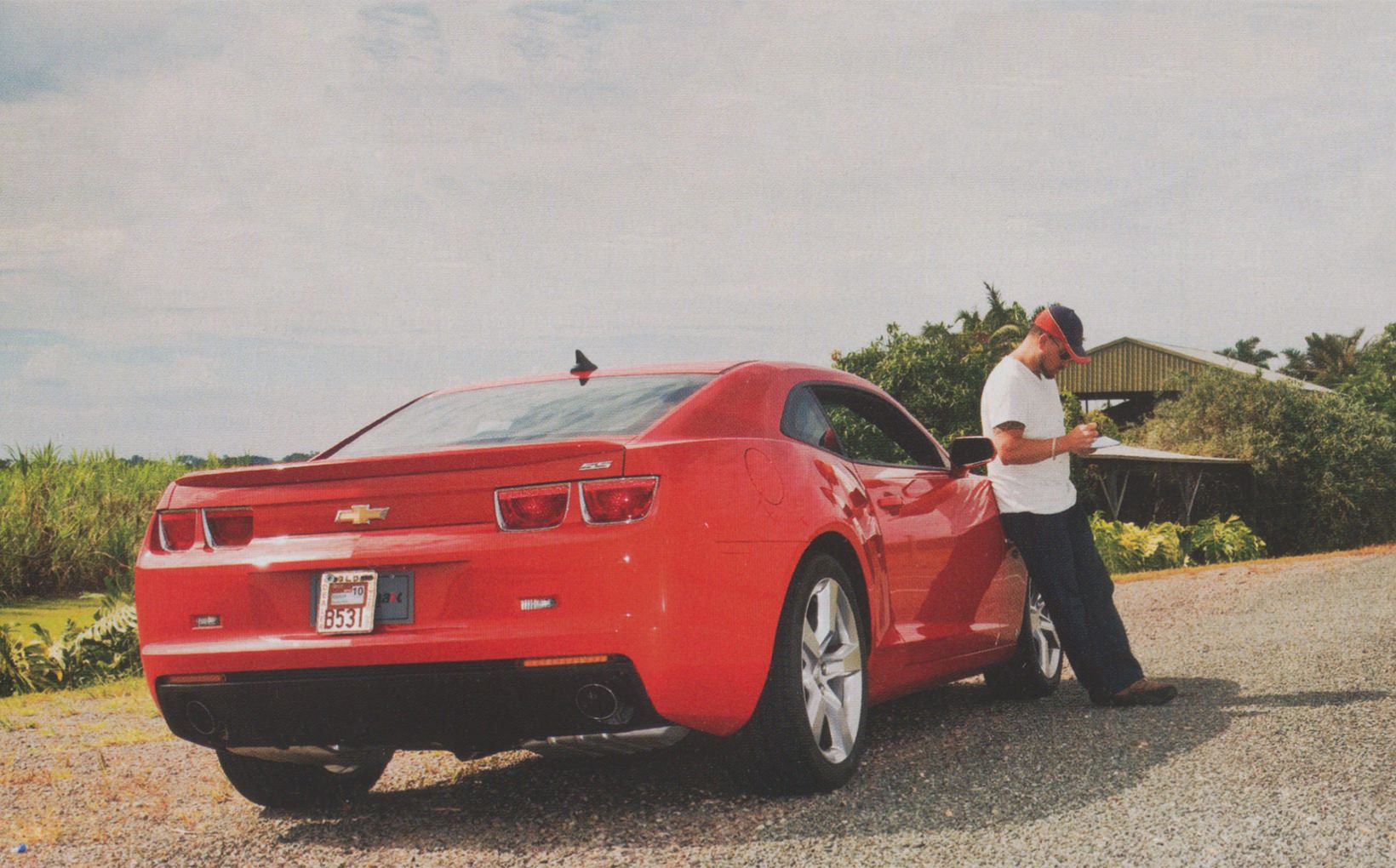 The Chev thunders out of corners, its speed escalating more quickly than my memory says a GTS can.

The first of a series of sharp corners approaches and I’m hard on the four-piston Brembo brakes; the Camaro sheds speed, but not as quickly as I hoped.  The test car has only 350kn on its odo, however, so perhaps the brakes aren’t yet bedded in.  Either that, or it’s under-braked.  Or we’re simply carrying too much speed into that corner.

Revelations and sensations clamour for attention.  I turn in aggressively, and the Camaro cuts in crisply, the 245/35R20 front hoops biting hard into tarmac.  The steering remains light, but there’s excellent feel telegraphing what’s happening at road level.  The body begins to roll onto the outside tyres, but settles quickly without any dramas and the back end stays faithfully glued to its line.  Have I gone in too slowly?  More throttle, more speed.  Still no complaint from the tyres.  More throttle.  Bap-bap-bap-bap.  Rev limiter.  The road straightens, and I gather my breath.  Phew.  The car’s grip is truly impressive, given that it wears the same Pirelly PZeros as the GTS, one assumes it’s the combination of less weight and a lower centre of gravity that elevates the Camaro to a higher dynamic plane.

Despite the lack of Magnetic Ride Control dampers, the Camaro also manages the balance between compliance and competence beautifully.  It feels marginally less composed over mid-corner bumps, but doesn’t surrender front-end grip or deliver excessive kick-back through the steering wheel.

But the Camaro’s rear end can’t match the tactility of HSV’s homegrown heavies; there’s a degree of vagueness in the transition from grip to slide that’s not as polished as we’d like.  The end result is that the shorter-wheelbase Camaro is not as malleable on the limit as a GTS, but there’s no denying it’s still a helluva muscle car.

The Brembro brakes are a weakness (on this example at least); there’s simply not the stopping power that there should be for a car of this performance and tenacious grip, it’s fair to say that the Camaro is indeed the top dog (or should that be ‘pony’) of Zeta-based performance cars and a worthy successor to the Monaro.  So come on Holden, extract the digit and stamp the Camaro’s passport for a long-term stay Down Under.