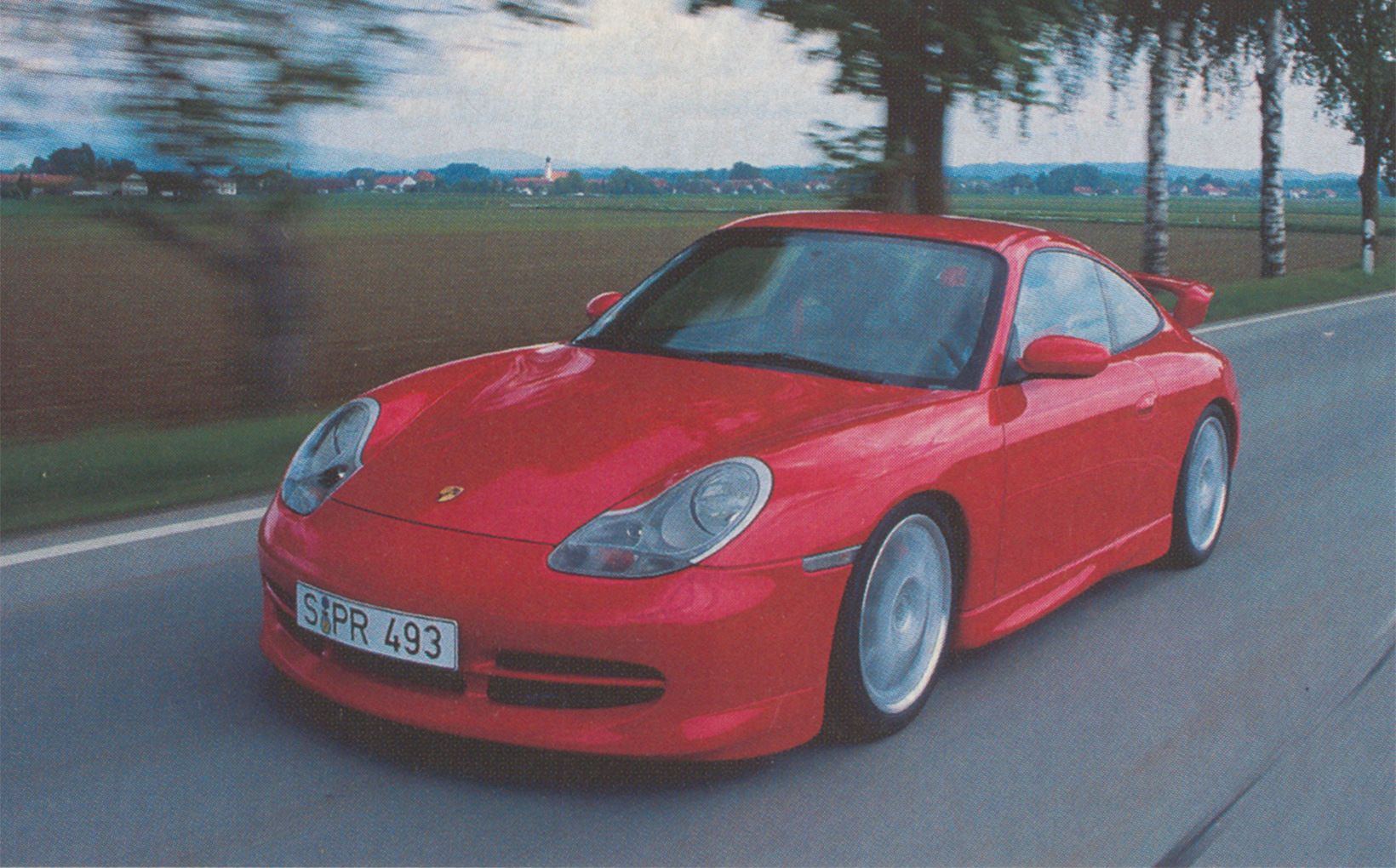 Fire-up the engine and listen to the rattles and clatter, the uneven, lumpy idle and jagged rise and fall of revs. There's only one car that'll make these familiar sounds - a Porsche 911. And a racing 911 at that. You need to stand behind Porsche's new 911 GT3 to best hear, and feel, the quivering mechanical vibrations and resonances. If you're the lucky one inside who turned the key, then at least lower the window and listen to the sound of an engine that seems to rock the car from side to side. It's obvious, wherever you are, that the cultivated manners of the new 911 are replaced by a richness of tactile sensations, born of a pedigree of 1 6 Le Mans wins and 50 years of club racing.

Just listening to the GT3, you could never doubt there is a direct link between this car and the legendary 1971 Carrera 2.7 RS, despite the change from air-cooling to liquid-cooling. And it looks mean, as tough as any RS. The adjustable bi-plane wing, the low-slung front spoiler and the way the gumball rubber on 1 8in 10-spoke wheels fit so snugly below the standard width wheel arches, shout purposeful performance. This is a harder, faster 91 1 for those hundreds of enthusiasts around the world who race. They will want to know this is the fastest road car Porsche has ever built, if you ignore the 20 utterly impractical GTl Le Mans cars.

With a top speed of 302km/h, it's faster even than the previous Turbo and the many RS 911s, this speed translating to sensationally improved lap times. The GT3 is the first production car to break the eight-minute barrier around the 20.8km Nurburgring circuit. Walter Rohrl, former world rally champion, piloted the road version around the fantastic German track in a staggering 7min 56.33sec, almost 40sec quicker than he's gone in the current 911.

Yet, like so many of its predecessors, the GT3 is also a racing car you can drive on the road. No track test launch for this wolf-in-wolf's clothing 911. Even if it's been developed by Porsche Motorsport to form the foundation of a new generation of racing 91 1 s for both Pirelli Supercup and Carrera Cup events, and an homologation model for international racing series for production-based GTs. Hence titanium conrods that permit 9000rpm, 1200rpm faster than the rev-limited road engine, and dry-sump lubrication with the oil tank mounted on the engine, rather than the body. 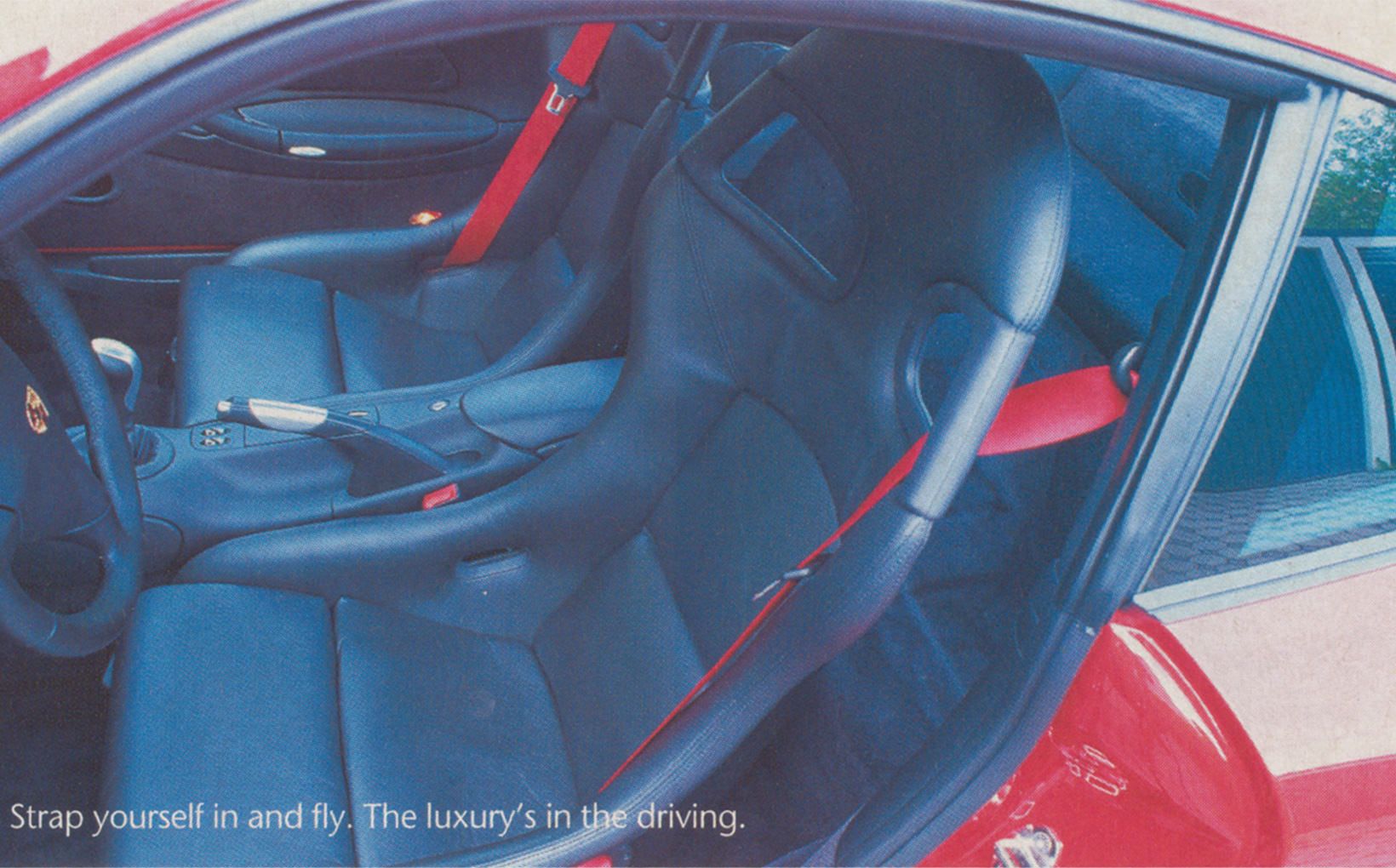 Inside, the GT3 strikes exactly the right balance between racing and road. It's all black, mostly leather apart from some prominent touches of alloy, which gives it a simpler, more business-like appearance than the standard 911. The lack of a linking console between dashboard and centre tunnel adds to this perception of the GT3's overt sportiness. Big, racing-style fibreglass buckets are finished in leather with token padding. They adjust only for reach and are mounted low, too low for me, but can be permanently raised by your local dealer, and hold you tight. It takes some getting used to, because the bucket is so tall and wraps around so far, the sides restrict shoulder and arm movement and can make changing gears awkward. The tiny rear seats of the 91 1 have been ditched in favour of a black carpeted shelf. Through the upper section of the small three-spoke, airbag wheel, the tacho's 7600rpm redline is evidence of its racing genes. No denying the special, tailor made for the race circuit feel. Air conditioning and a sound system are no-cost options. Likewise, the Clubsport - expected to be 20 percent of a run of 1 300-1400 cars that began in April and finishes in December - adds a full rollcage that incorporates the spring strut supports for the rear axle. All forces acting on the suspension are transmitted directly to the roll-cage, the stiffest part of the car, rather than the body, for improved stability. Clubsport buyers also get fabric (instead of leather) seats, six-point instead of three-point belts and a fire extinguisher as standard equipment.

Crank up the electric windows - standard, like the side airbags, central locking and engine immobiliser - and the sound from the rear­mounted engine is muted, though it's clearer and closer, and never as refined as the regular 911. The clutch is firm and noticeably heavier, but its progressive engagement is easy as the GT3 moves off remarkably smoothly. It's then you start discovering this engine has two, once contradictory, qualities. It is both tractable - try 1500rpm in sixth and it's happy to accelerate away- and almost supernaturally responsive.

The 3.6 litre engine is a development of g the liquid-cooled unit used in the Le Mans S winning 911 GTl . In a changing world you can't leave out safety items or bits like air-con, unless you want to go racing, so Porsche's objective was to add as much power as possible to overwhelm the 30kg weight increase. The power-to-weight ratio of 5.1 kg/kW almost, but not quite, matches Ferrari's new 360 Modena's 4.7kg/kW. 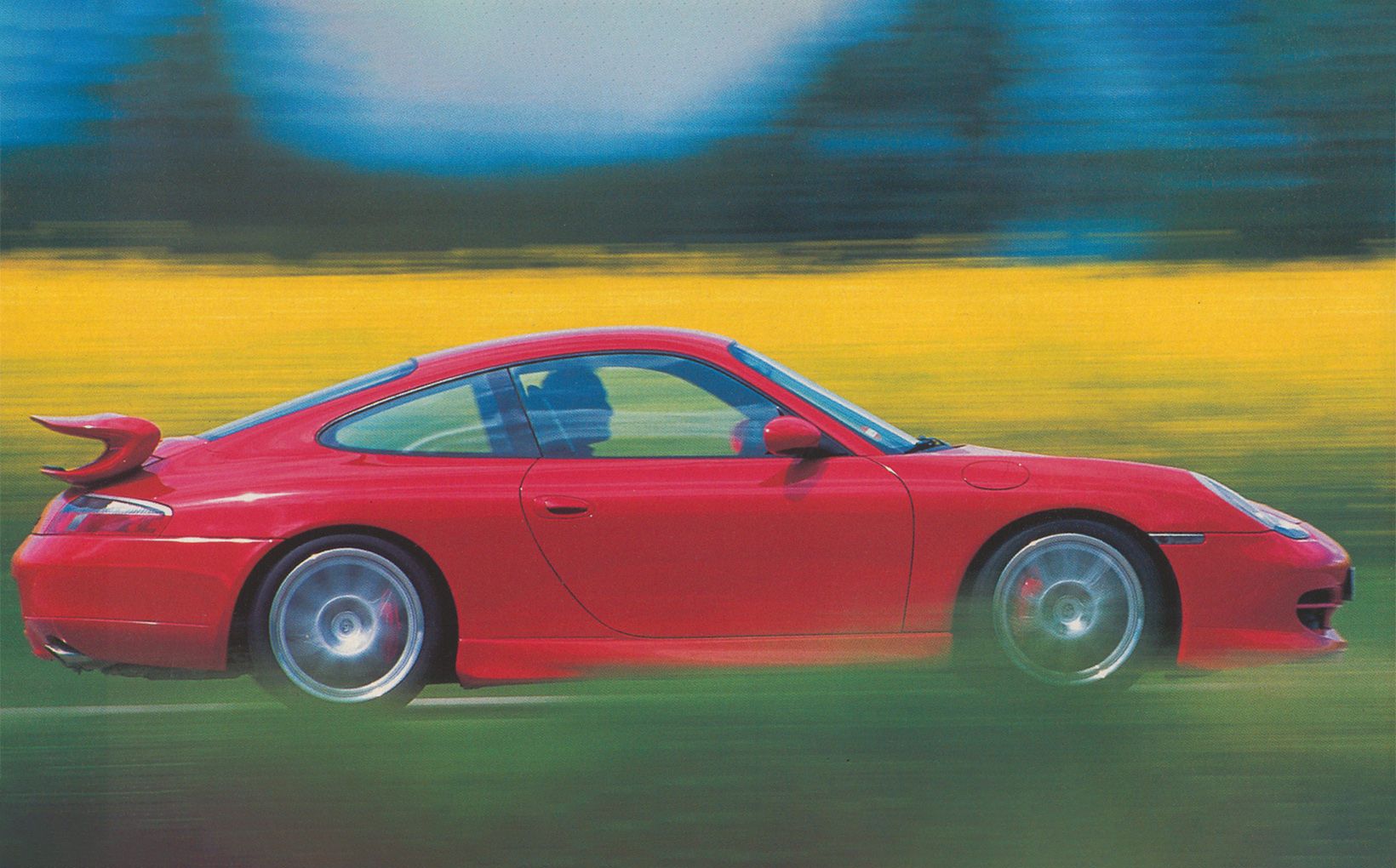 Porsche engineers have achieved exactly l00bhp per litre; 265kW (or 360bhp) is pumped out at 7200rpm and 370Nm of torque at 5000rpm. The performance can be as frenzied as this implies, or surprisingly flexible. It's willing to amble around, with the driver changing up at 3000rpm, and still rush away from other traffic. Press harder and the car just flies fiercely away to the soft 7800rpm cutout in first, second and third gears. Only in fourth and above is there a moment to catch your breath, because the acceleration doesn't begin to taper off until you're on the high side of 250km/h. And that's still in fifth, with a gear to go. Porsche claims zero to 160km/h in 1 0.2sec. It feels, and sounds, quicker. In the gears, it's almost as quick as the new M5. The GT3 demolishes 80-120km/h in fifth in 6.7sec, when the 5.0 litre Simmer takes 5.9sec in the same ratio. On the other hand, the GT3's ferocious 23.2sec for the standing kilometre throws the M5's 24.1 sec into touch.

If the power delivery is one near-seamless sledgehammer charge from 3500rpm to the cutout, you could never say that of the symphony from the tail. At 41 00rpm the induction noise becomes harder, then the sound surges again at 6100-6200rpm and takes on a harsh resonance that hurts if you hold this speed in sixth. Below 250km/h the GT3 feels reassuringly stable but the indicated 280km/h we saw on a near-deserted autobahn demands concentration. Porsche won't talk figures for rear lift, for despite all those extra wings the GT3 doesn't develop downforce.

The steering is truly delicious; direct, precise, instantly responsive and alive with a subtle hint of the old 911 's trait of jiggling in the driver's hands. Those who find the 911 's steering too calming will love the GT3's eagerness. Intense, but never nervous. And it is fast. The levels of adhesion are enough to suck out fillings. The tyres bite, the GT3 turns and at sane speeds is only ever neutral, loading up the outside wheels, the body staying flat, the car becoming light and agile without losing the sense of balance. Push, really push, using second out of bends and you can balance the GT3 on the throttle. The transition to oversteer is soft, even if the speeds are not, for the natural poise of the chassis and the limitless torque mean the wheel and throttle can be worked together to hold a slide. And there's no electronic device to restrain the engine, just a mechanically variable limited-slip differential that gives up to 40percent power distribution under power and 60percent on the overrun. 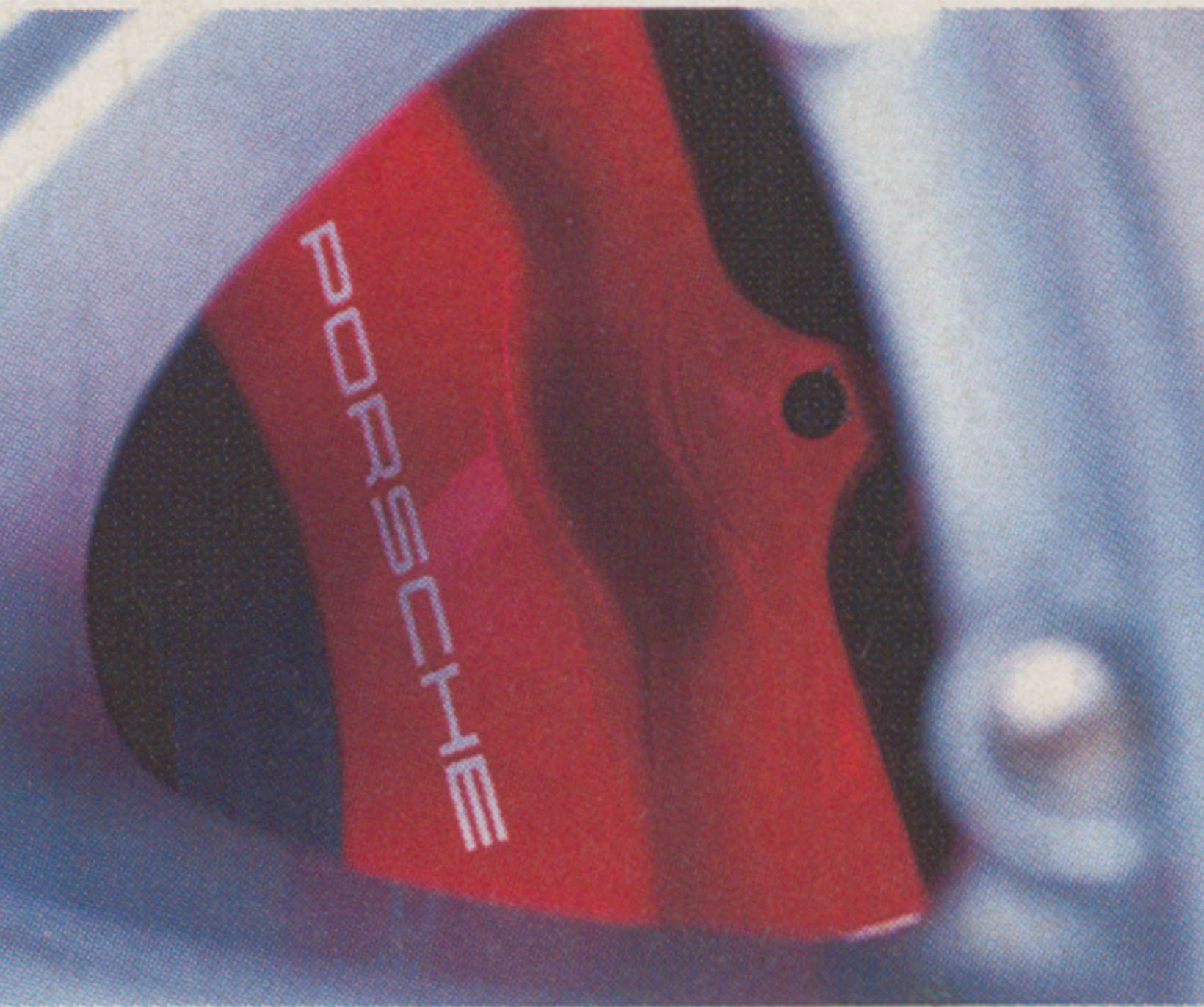 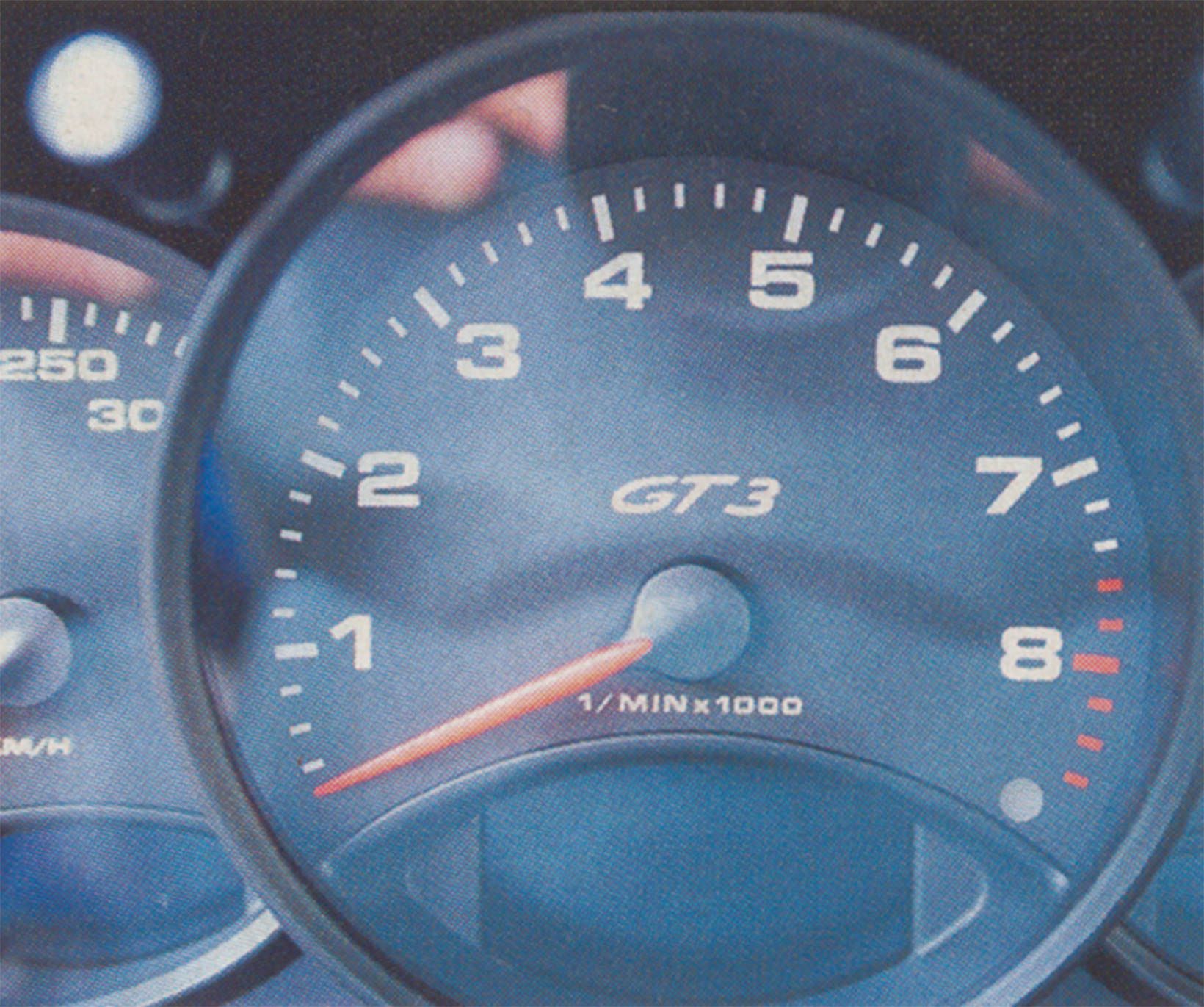 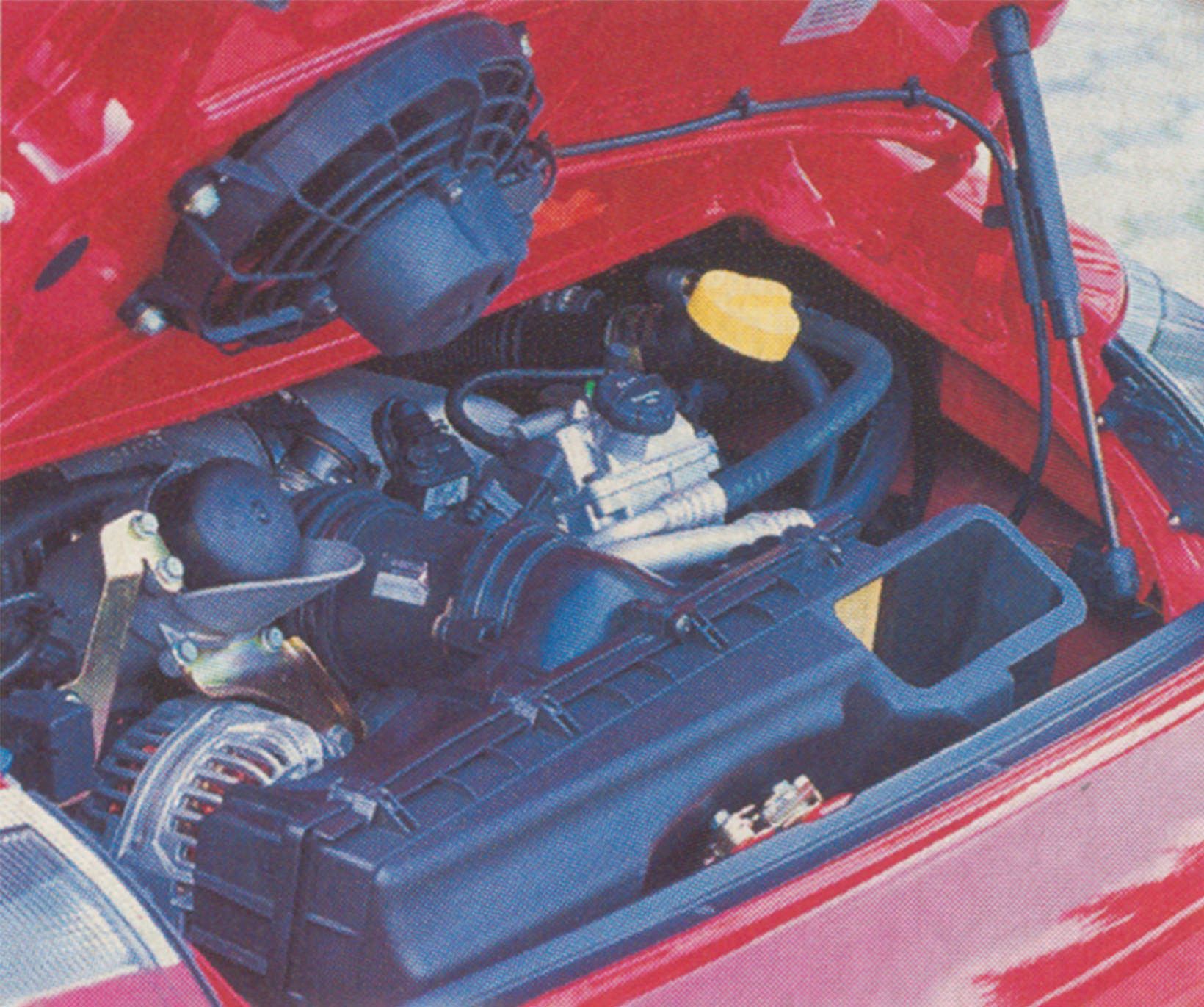 The suspension is taut. Porsche has lowered the ride height by 30mm and the springs, dampers, roll-bars (which are adjustable for racing) and bushes are all firmer. The ride is firm and noisy over broken tarmac at city speeds, but there is enough compliance.

The right-hand drive GT3s don't get the bigger 89-litre tank fitted to left-hand drive cars, but the standard, inadequate, 64-litre 911 tank. Apparently it's just not worth making the structural changes necessary for the bigger tank for right-hook models.

At around $225,000 in Australia, the GT3 offers serious competition to the far more expensive Ferrari 360 Modena. Porsche's more expensive and luxurious 911 Turbo - launched at September's Frankfurt show, but on sale mid-2000 - will offer an altogether different driving experience. The GT3, more focused on the sporting driver, may be the purist's excitement compromise.

Despite the blistering performance and fantastic handling, it remains sufficiently civilised to drive every day.