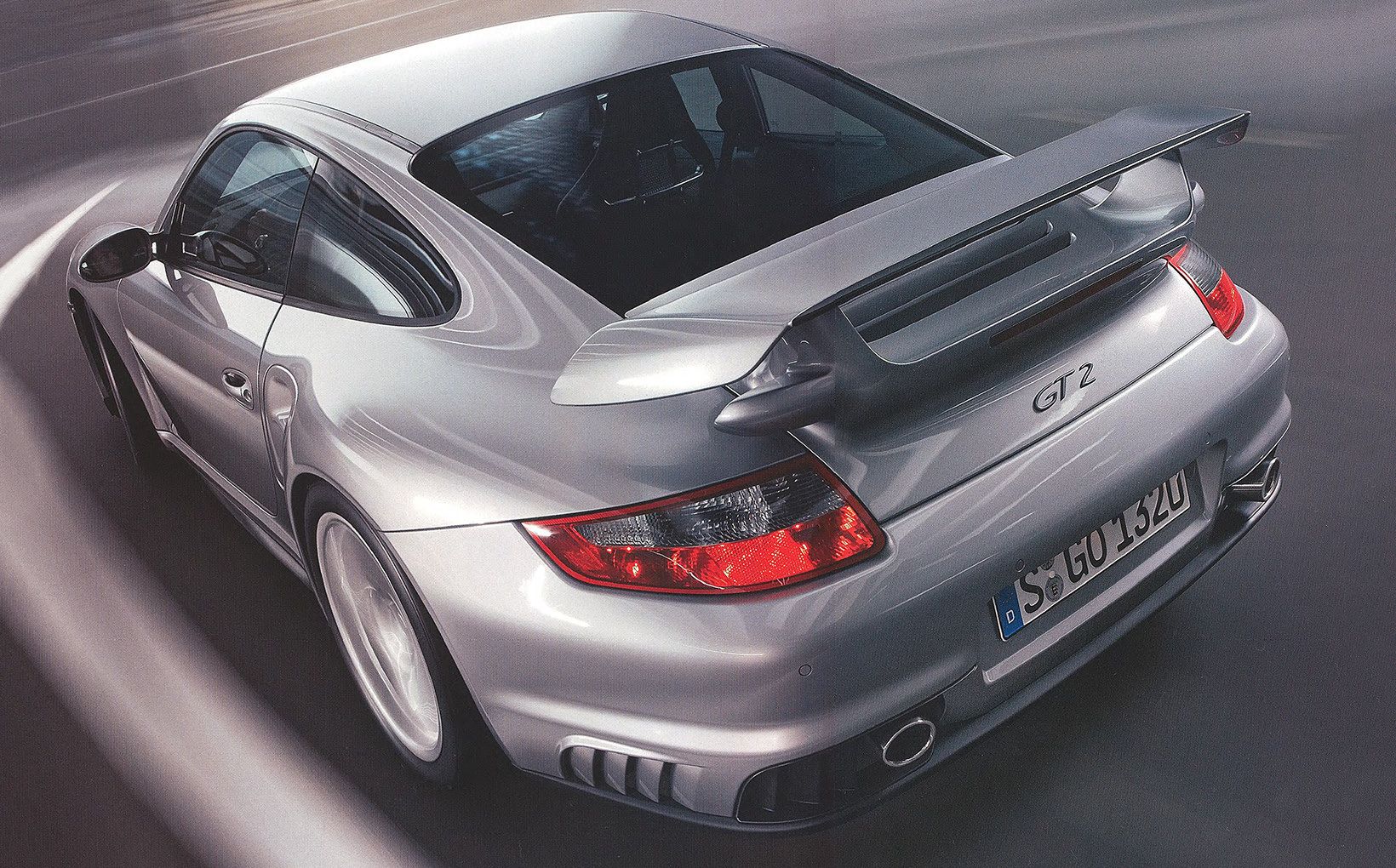 Here it is then, the fastest production Porsche 911 ever built - a 3.7 -second application for an interview with one of the Police Service's finest.

Take the twin-turbocharged 3.6-litre flat six from the 911 Turbo, turn up the boost, then plant it between some of the wildest haunches in the motoring world. Lose the front drivetrain to aid weight and purity, suspend it with the adjustable bits used in the atmo' GT3, and you've got the pick of the Porsche chocolate box from the racing department at Weissach, the new GT2.

It's the 15th 997 variant launched in a period of about 30 months, and the visuals - big, effective rear wing, gaping front air intake, slots and gills and steamroller rubber - have the power to set off a state of arousal rarely reached via technology alone.

Confirmation of the GT2's elevated place in the 911 pantheon came when rallymeister Walter Röhrl (see panel, top right) whipped a standard GT2 around the Nürburgring's Nordschleife in 7m32s - with the only concession to fast lap times being to kill the stability and traction controls. It's considerably faster around the *Ring than the old GT2 and Röhrl says the improvements have come in all areas, not just the engine.

"This is certainly the best 911 I've ever driven," Röhrl volunteered between showing off the GT2's all- round athleticism on a course laid out on an airstrip near Bremen, He may be on the Porsche payroll, but it's still an opinion difficult to refute. 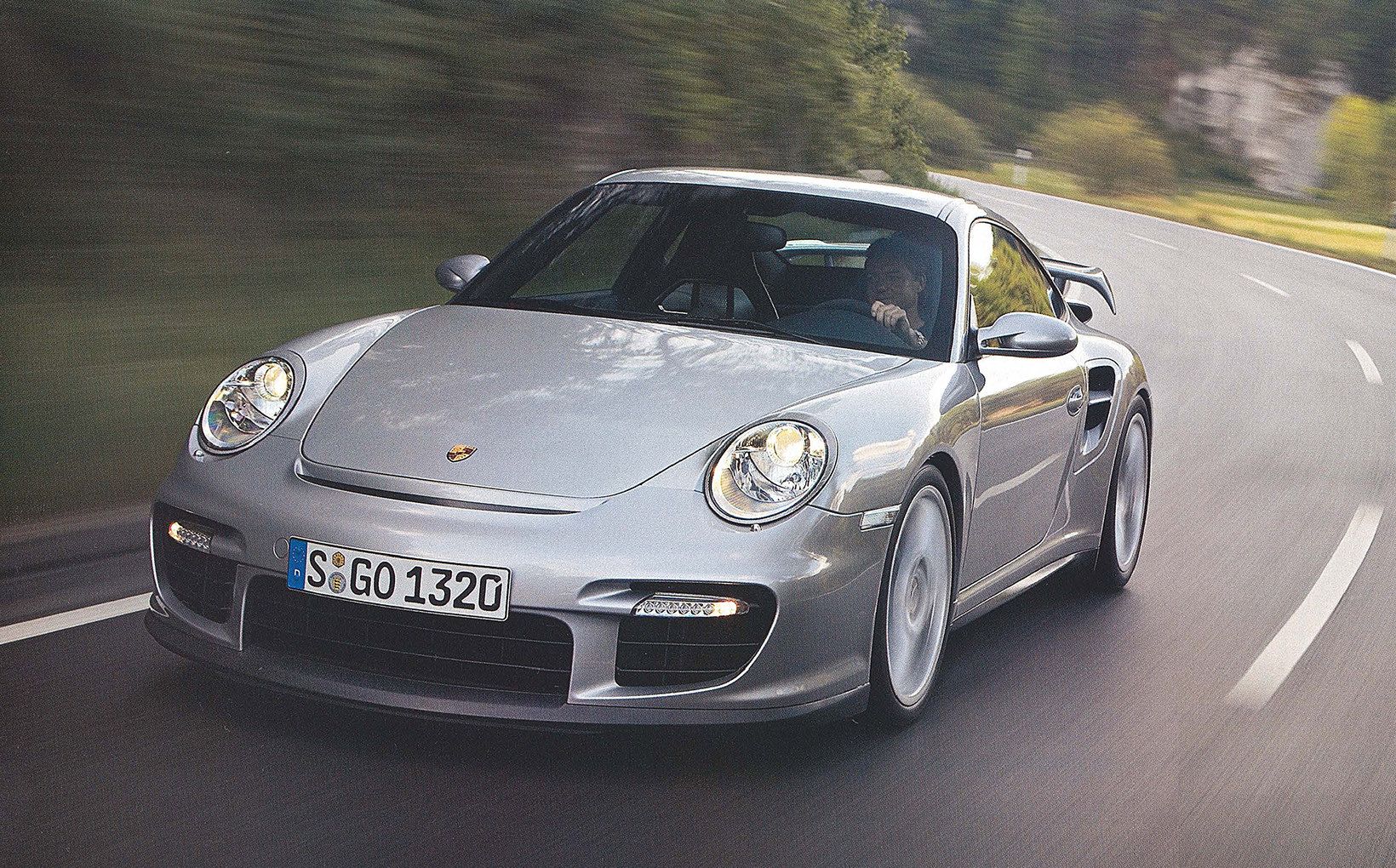 Past iterations of the turbo rear-drive GT2 have been considered a mite too confronting and untamed for all but expert drivers, But Porsche owners, occasionally satirised as people who put pose before performance, could always finger point to three models - the marvellously quick 911 triumvirate of Turbo, GT3 and especially the GT2 - and laugh those amateur psychologists all the way back to their local pub.

Offering slightly varying shades of toughness, these three have been immutable examples of revered, hard edged Porsches. The latest GT2, however, pumps that muscle through the pain barrier, through the steroid zone and out the other side.

More urge has been extracted from the twin-turbo engine - it's now belting out 390k W at 6500rpm and 680Nm between 2200 and 4500rpm. The increase in the GT2's output by 37kW and 60Nm over the current 911 Turbo is the result of raising the turbo boost pressure to 1.4bar (up 0.4bar over the 911 Turbo) and introducing an innovative expansion intake manifold which reduces the temperature of the fuel/air mix.

With the extra 50 horses and 1440kg (145kg lighter than the Turbo), the latest GT2 offers a power-to- weight ratio of just 3.69kg per kilowatt. The result is shattering acceleration, but in Porsche style, the whole package - grip, handling, braking, and some subtle new electronic driver aids - work in concert like no other road-going Porsche previously sampled.

Importantly, the Porsche Stability Management (PSM) used for the first time in the GT2 can be deactivated in two stages, Lateral inhibition can be banished by pushing the PSM button, and longitudinal dynamic control is eliminated by shutting down the traction control, Either way, ABS stays active. So the driver aids don't completely shut out the fireworks, but they do keep the lighter away from the double bungers. 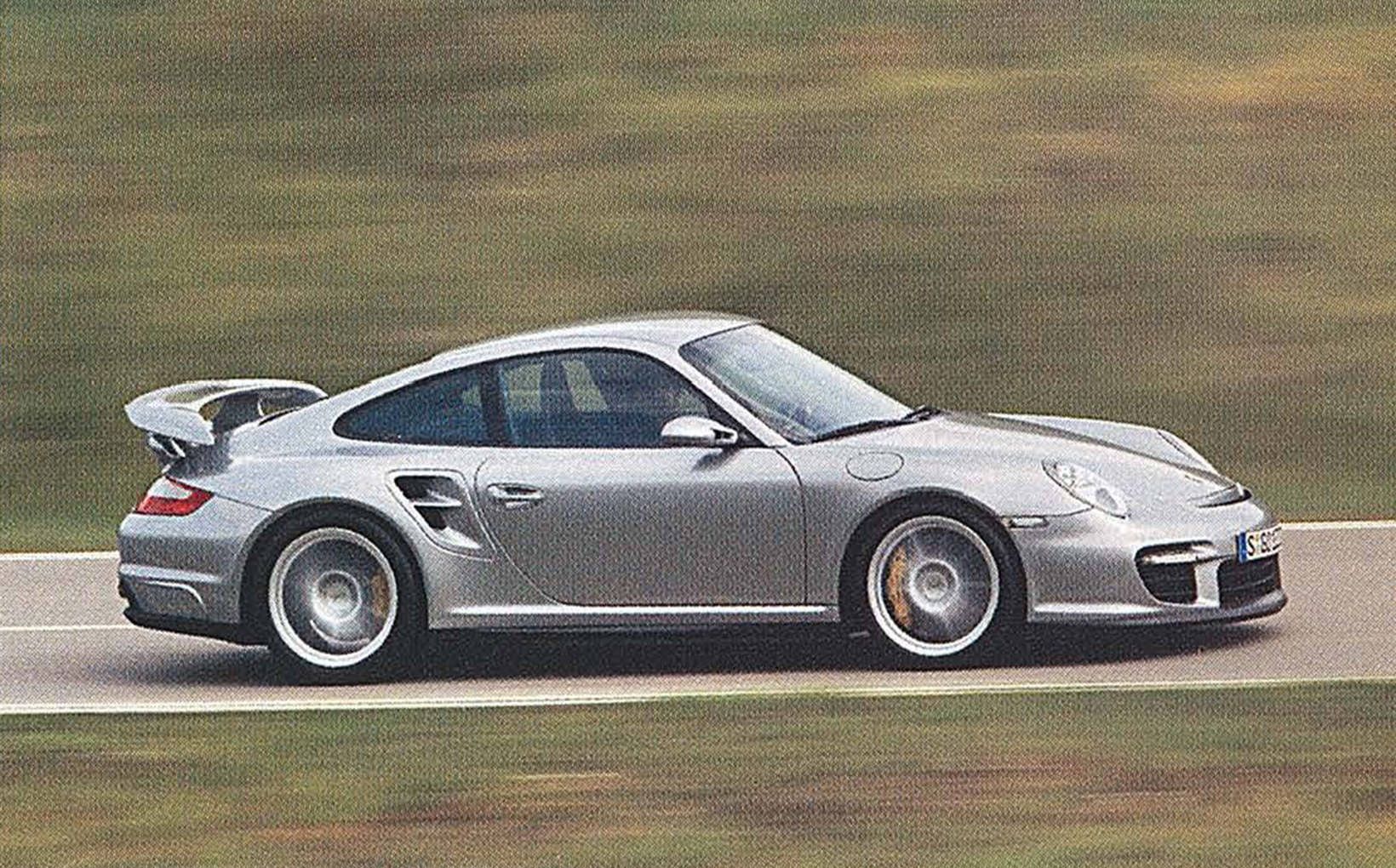 Fire up the GT2 and there's that urgent, fast, grab a gear-and-go idle. Snick it into first and get on it, and the sound that greets you is angry and guttural, with a background of turbo activity.

Cutting loose on Germany's no-limit autobahn, the GT2 flies through the gears, jiggling a teeny bit as the fat Michelins walk over the road surface. This is a seriously swift beast that accelerates not with a kick in the tush, like some turbos, but with a linear surge that finds the redline in no time, and carries you to 300km/h in 33sec. In fact, at 250, it still has another gear left. The Astras and Polos in the centre lane come and go in a flash, and any concerns about a 100-150km/h speed differential disappear when you feel the Porsche's aero pushing it to the tarmac and the reassurance that this is the best braking system Porsche offers in a road car.

PCCB anchors with 380mm/350mm rotors made of a composite carbonfibre/ceramic compound not only reduce unsprung weight by 20kg, but are nothing less than incredible for stop after stop. This car will go from rest to 300km/h and back to rest in less than 40sec. Again and again. These stoppers don't have any servo assist, either, the idea being to offer as much control and feel as possible for the sporting driver.

The transmission choices will not excite the tech heads, but it does please me. There's only one gearbox choice - a delightful six-speed manual, thanks very much.

Off the autobahn to some rural single-lanes, it's time to experiment cautiously with the electronic aids. With stability control and traction control in work mode, there is still some latitude and the tail will slide a little before intervention. But with the nanny off the driver needs to be cautious and smooth with the steering wheel and throttle, even with the wider track and 325/30ZR19 Michelins at the rear and 235/35s on the front. 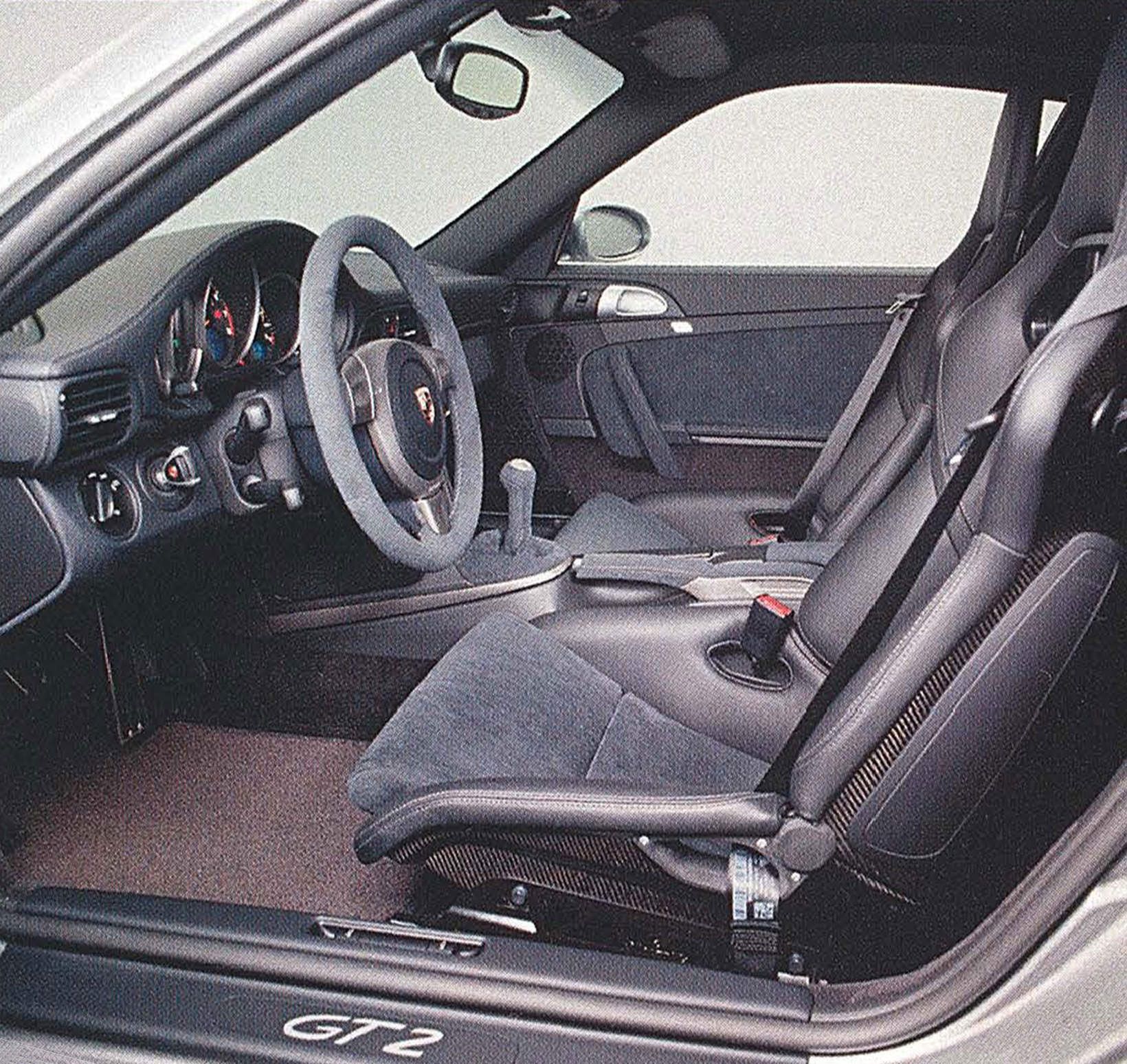 When the tail starts sliding under acceleration, there's plenty of time to react and to keep it flowing smoothly around and out of the bend. Unlike the older GT2, which would lurch from stability to a holy-shit moment very quickly, it's not difficult to keep the new beast reined in. In fact, the transition from neutral to power-down oversteer is remarkably subtle, provided the driver doesn't use the accelerator like a light switch.

You can sense exactly how much power it will safely transmit to the road at any given moment, so your confidence builds as it dawns on you that the GT2 is working with you, not issuing threats on your life at every corner. It takes orders gracefully, and hits its marks with great precision, Understeer is minimal unless you charge too hard into a corner and grab a big lump of lock.

The GT2's suspension setup is a combination of Turbo and GT3 with some specific modifications. It's around 25mm lower than a regular 911, and the ride is firmer. Porsche Active Suspension Management (PASM) has been refined for the new GT2 to give taught damper action in Normal mode, or a really firm ride in Sport (best left for the track). Further adjustability includes four different front anti roll bar settings and three for the rear. The rear axle subframe is aluminium instead of the Turbo's steel item, and the rear suspension is rose jointed. 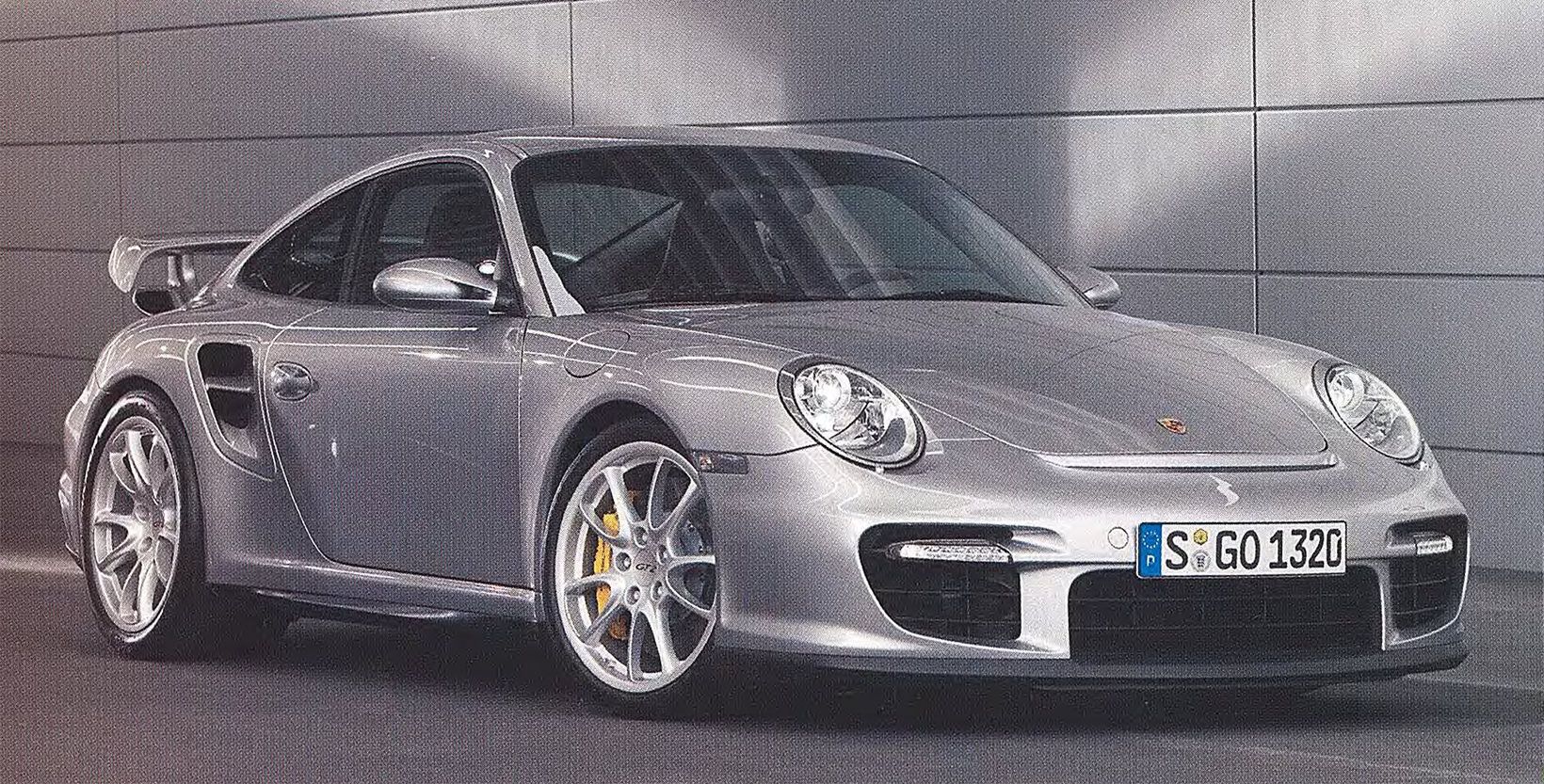 Your confidence builds as it dawns on you that the GT2 is working with you, not issuing threats

One issue I did find was when attempting to use the throttle and the brake simultaneously to settle the nose before turning into corners: as in many modern cars, this leads to a cut in engine power. Röhrl says there's an easy solution; don't left foot brake. Hmm- not being able to use the two pedals at once may disappoint lovers of traditional driving techniques.

Other niggles? The brake pedal is too high compared with the resting accelerator position = heel and toeing was possible but not as easy as it should have been. Röhrl suggested the pedal planes would be closer once the brakes bedded in and the brake pedal dropped a tad. Porsche long ago figured that sizzling performance doesn't need to come at the cost of comfort. Buyers who can throw down their platinum Amex for a $425K purchase are invariably keen to have a few mod cons aboard. So as purposeful as the GT2 is in the matter of travelling quickly, it also has six airbags. 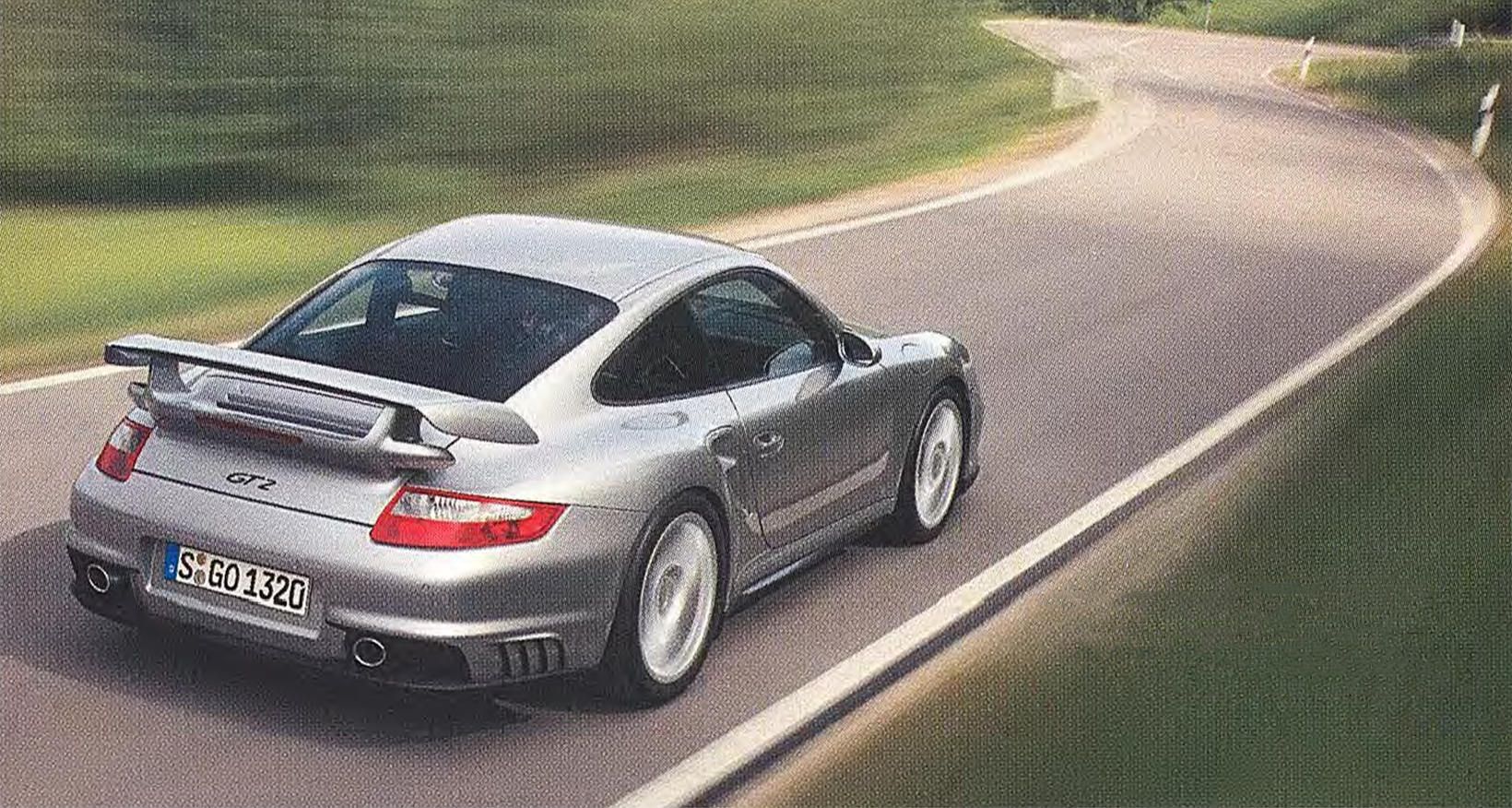 GT2 delivers dynamite performance, and unobtrusive electronics give you every chnace to exploit it.

While not exactly supermodel thin, this whole car has been engineered with an eye on the scales. The muffler and tailpipes are titanium, saving about 9kg - half the weight of the regular steel system. The saving is rearward of the rear axle line, but even so, the weight distribution is heavily biased to the tail - 38:62.

The glassfibre/carbonfibre leather-covered sports pews save valuable kilos over conventional 911 Carrera seats. But the trade off is a lack of adjustability other than fore aft movement. Belt less rear seats' are decorative and unsuitable for human cargo. Optional - and preferred - are adaptive sports front seats offered in some other models They provide individual side support, lumbar and have multi- user memory functions.

For those who lean towards more track work, a no-cost optional Clubsport package, incorporating rear rollcage, six-point harness for the driver, fire extinguisher and flame retardant coverings on the seats is available.

Comparing the new GT2 with the previous model or even with the current GT3, the inescapable conclusion is that Porsche motorsport has upped the ante in the key area of engine output, managing to tame its brutal performance without leaving the enthusiast driver in the grip of interfering electronics. The 997 GT2, even with its mind-blowing performance capability, could easily be used as a daily driver.