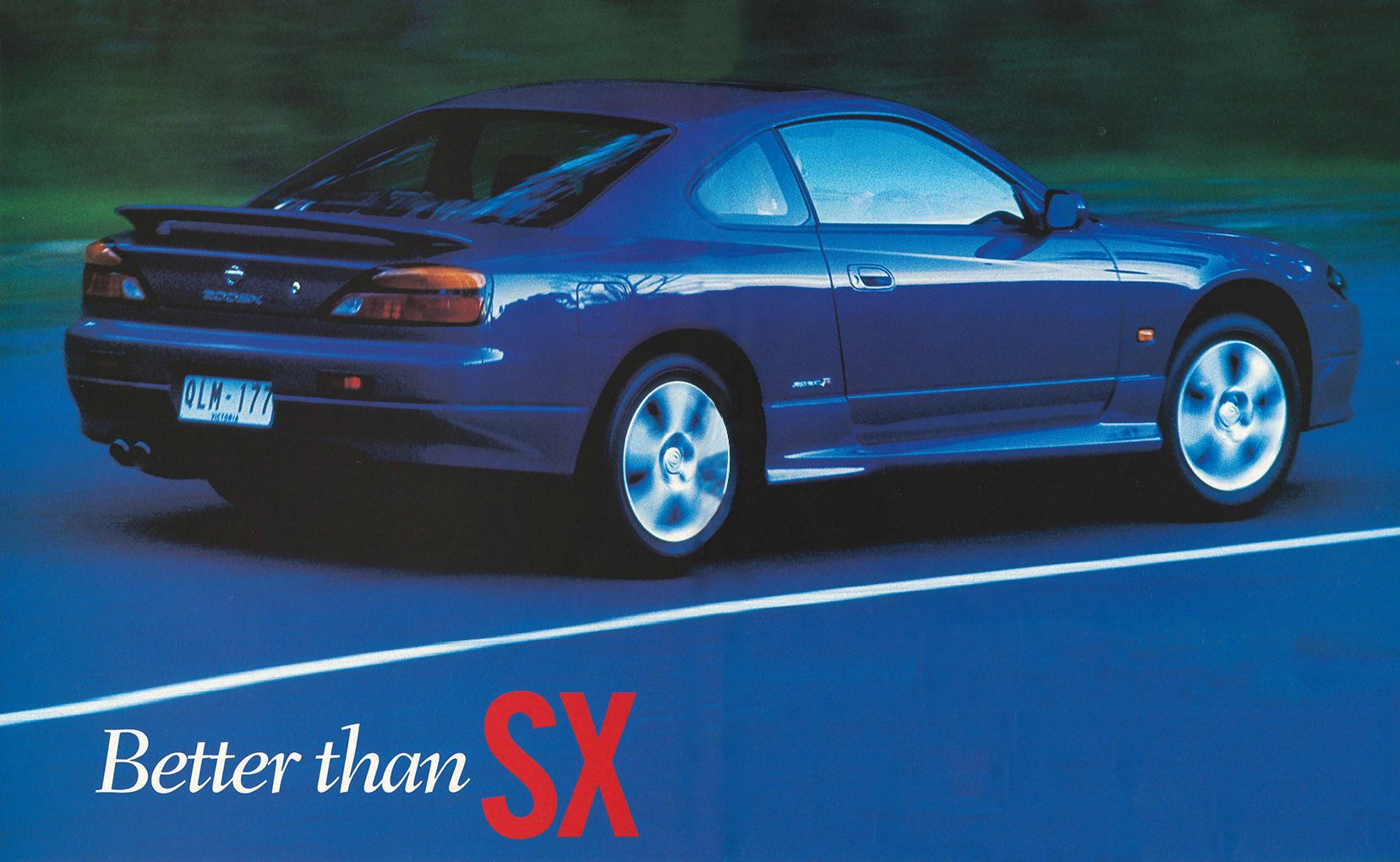 It has taken Nissan 18 long months to release the smooth new 200SX/Silvia here after its Japanese launch. We could only salivate at the photos, and begin to think of the old coupe as stodgy meat. And the excuse for making us wait to wat our pudding? Ours is the only export market that required specific engineering, Others, like New Zealand, were hungry for what Japan could serve. Right Now.

Nissan hope to sell about 100 Silvias a month. It has a pretty good chance, too. The new is not only much better looking than the old, it handles better and comes with more goodies.

Although some vital ingredients - such as the hot 2.0 litre turbo - are much as before, there has been an extensive make-over beneath that slinky new costume, While the previous 200SX could crack0-100km/h in less than 7.0sec and run the 400 metres in 15.0sec neat, the born-again model promises to be even quicker, as a manual at least. This isn't because the lusty engine has changed, but because it;s backed by a six-speed gearbox that also brings a newly developed, very effective limited-slip differential. And kerb weight is down by about 25kg, Unofficial Nissan tests suggest the manual's 0-100km/h time could be up to a half second quicker than before. Which should lead to a high 14sectimefor the 400 metres - WRX territory. 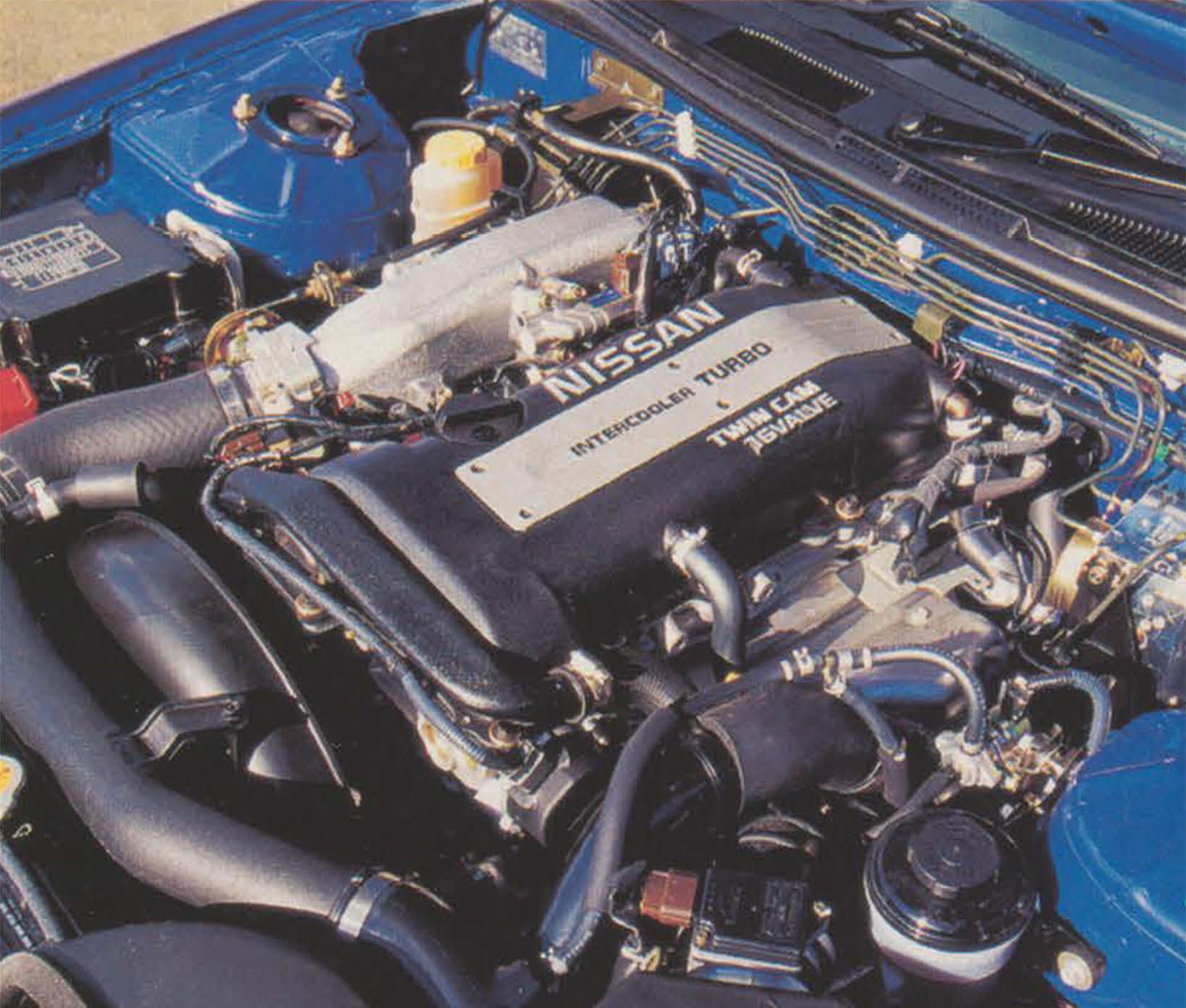 It has been a couple of years since Wheels last drove a 200SX, but the SR20DET engine immediately delivers powerful reminds of why it is very warmly regarded wherever high performance is spoken. There's an even more spirited version in Japan, but it requires octanes higher than Australia's premium petrol. So we continue to get the slightly more modest version that also features a light-alloy block and head, double overhead cams, four valves per chamber, a knock sensor and variable intake valve timing. Detail upgrades include a dual mass flywheel for vibration reduction, revised direct ignition for hotter spark, roller bearing turbo shaft for longer life and a thicker intercooler core for greater intake efficiency. Even so, the maximum power and torque specifications remain unchanged.

Drop the accelerator pedal to the firewall and the turbo 2.0 litre responds with a rush; not with a fearsome, kind of Rottweiler lunge on the leash, but rather a smooth and forceful, swelling thrust that feels like 3.0 litre's worth. Though the turbo really gathers itself as the tacho needle powers past 3500rpm or so, the engine is also nicely tractable when rambling in the slower range and then responds with all due urgency when you gas it.

Worked hard, the engine isn't noisy but has a purposeful, solid sound which goes some way to correcting any impression - promoted by the smooth delivery- that the mid range performance is a bit on the soft side. Everything is relative of course, since Silvia really swings in the tacho's upper quarters, and that's what the six-speed gearbox is for. Otherwise, it may be that the optional four-speed automatic is more your style, as it will be for around 50 percent of Silvia buyers, according to Nissan Australia's sales projections. 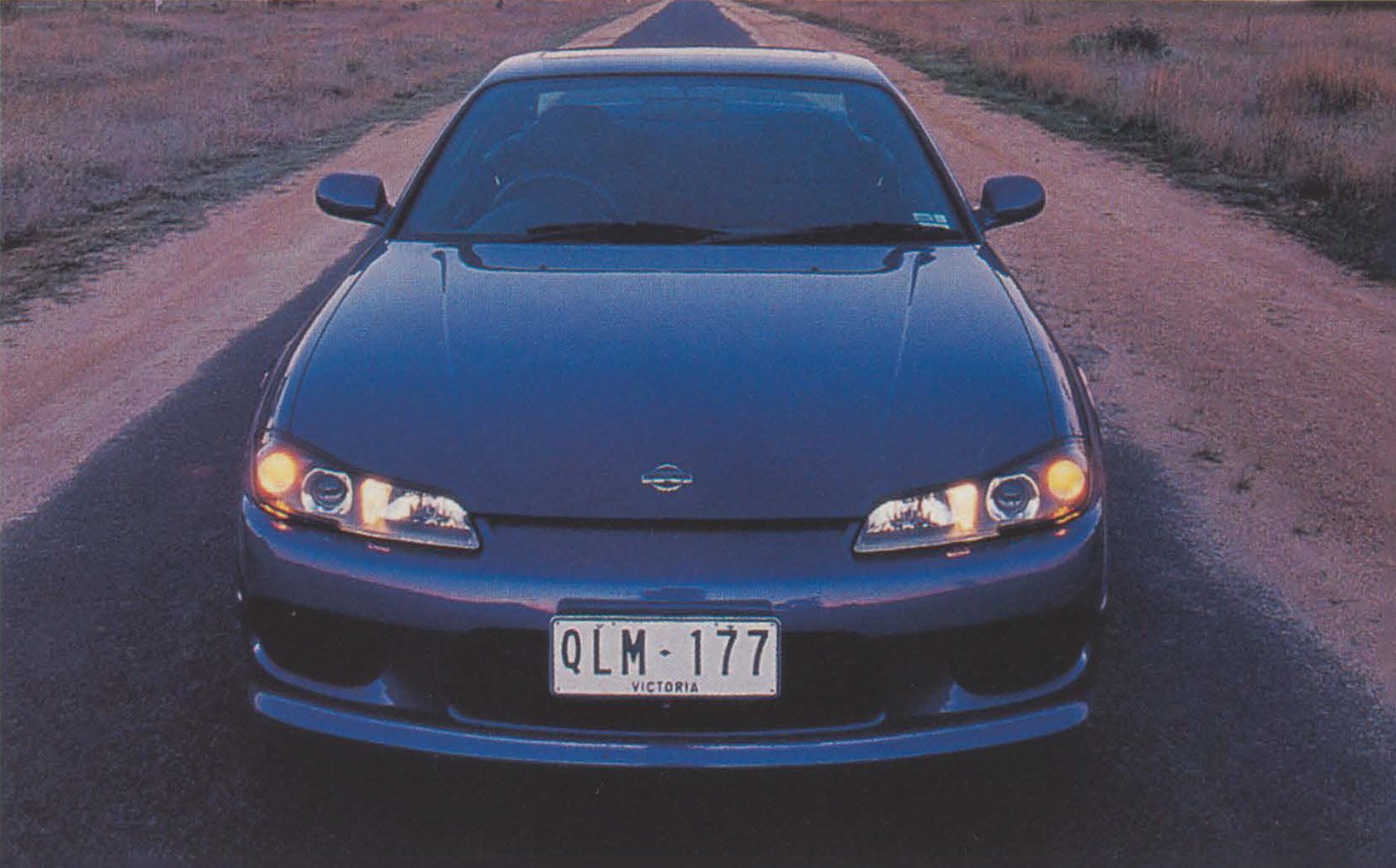 The self-shifter is well attuned to the sporty turbo. Apart from an overdrive switch on the knob, a rocker on the console offers Power and Snow modes. Either way, the automatic's delivery is ably transmitted by a viscous limited-slip dliff.

The manual is the serious drivers' choice, however. And thankfully, this time the lever is a bit closer to the driver and the pedals' pad angles revised for improved tactility. The final drive again has 3.69:1 ratio, which the six-speed accompanies with a lower first gear and higher top than the previous five-speed. The box is produced by Aisin Seiki, where similar six-speeds for the Lexus IS200 and Mazda MX-5 come from. But Nissan's shift quality beats the others thanks to the lever's crisper and more precisely defined travels from slot to slot. Unlike some, the shifter doesn't tend to tangle with the gate when whipped to or from fifth and sixth. Also, it needs a good strong wrench to the right to overcome the detente guarding reverse's dogleg.

The Silvia's steering has been given slightly firmer weighting and a better connected feel, and though the turning circle remains a wieldy 9.8 metres, the wheel's still a touch tardy with 3.1 turns between the lock stops.

The brakes are basically the same sure stoppers as before, with big rotors and four-piston calipers borrowed from the heavier Skyline, but the (larger) booster has been tweaked to provide brake assistance with increased servo effect at high pedal pressures. Dual solenoids (instead of the usual one) bring speedier cycling to the uprated anti-lock system. 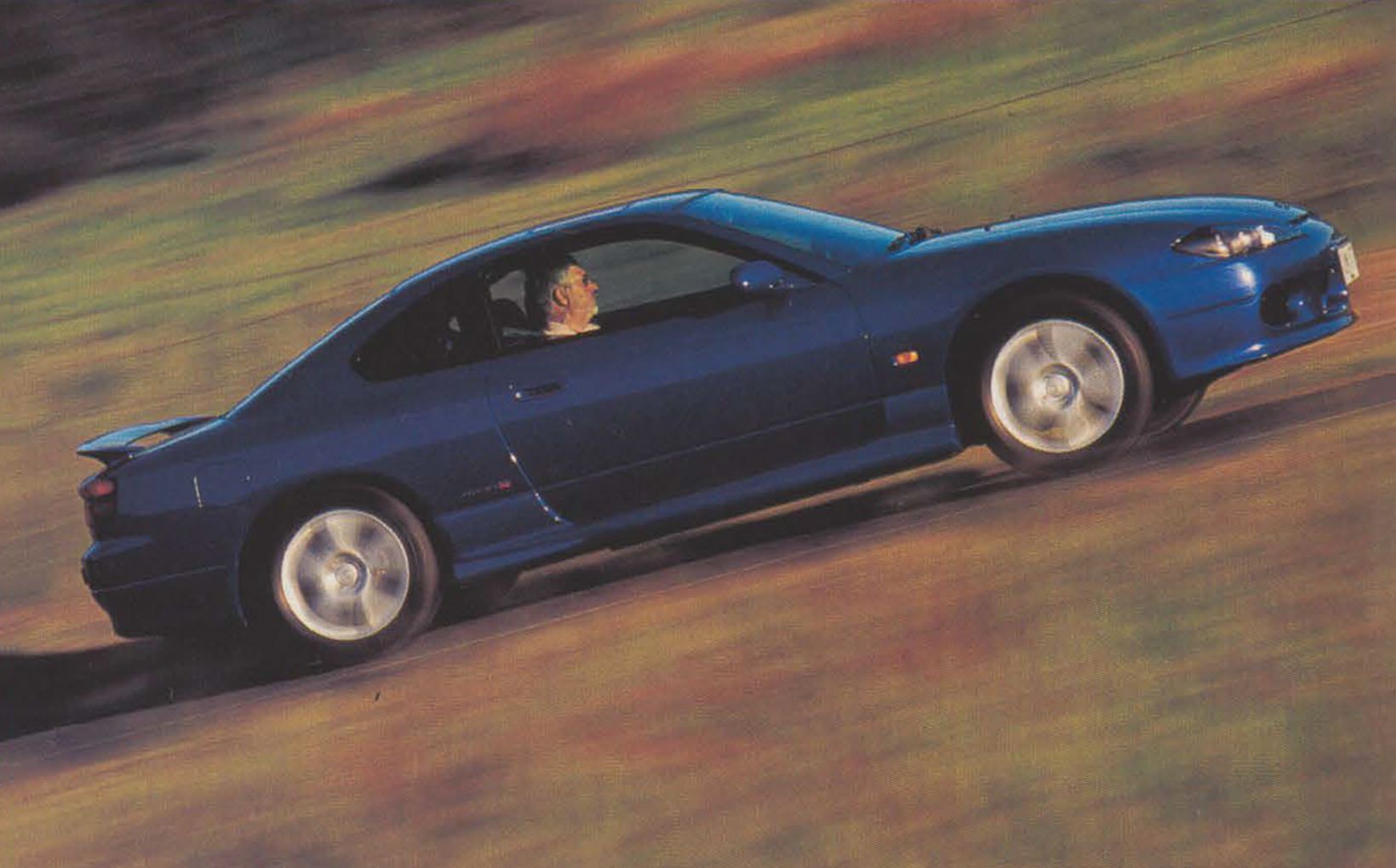 From a driver's viewpoint, the improvements in chassis dynamics feel like the old 200SX has been to the gym. The extensively revised body is perceptibly tauter than before, and some serious development has gone into the suspension bushings, springs and dampers. As a result, the ride is a bit firmer and the handling a whole lot more disciplined. Hunted along, the new car corners with a confidence foreign to the old model. No more does the tail squirm queasily and lead the car to boogie off line when cornering forces go beyond the comfort zone. Now Silvia turns in decisively, then settles low and flat, and goes where pointed. Instead of that old pudgy feeling, the Silvia's handling is very nicely balanced and responsive, even when a touch of power-assisted tailiness is induced through tight turns. The changes make the Silvia as entertaining in corners as it is thrilling on straights.

Though the wheelbase is unchanged, the tracks are 10mm narrower than before and the shapely body is drawn a bit tighter overall. The styling speaks for itself. Where the prior model had pleasant but anonymous lines, the new edition makes a clear fashion statement that turns heads. Even if some eyes see a hint of the Alfa coupe's wedgy side strake and the 550 Ferrari's flanks, the overall look is Silvia's own. 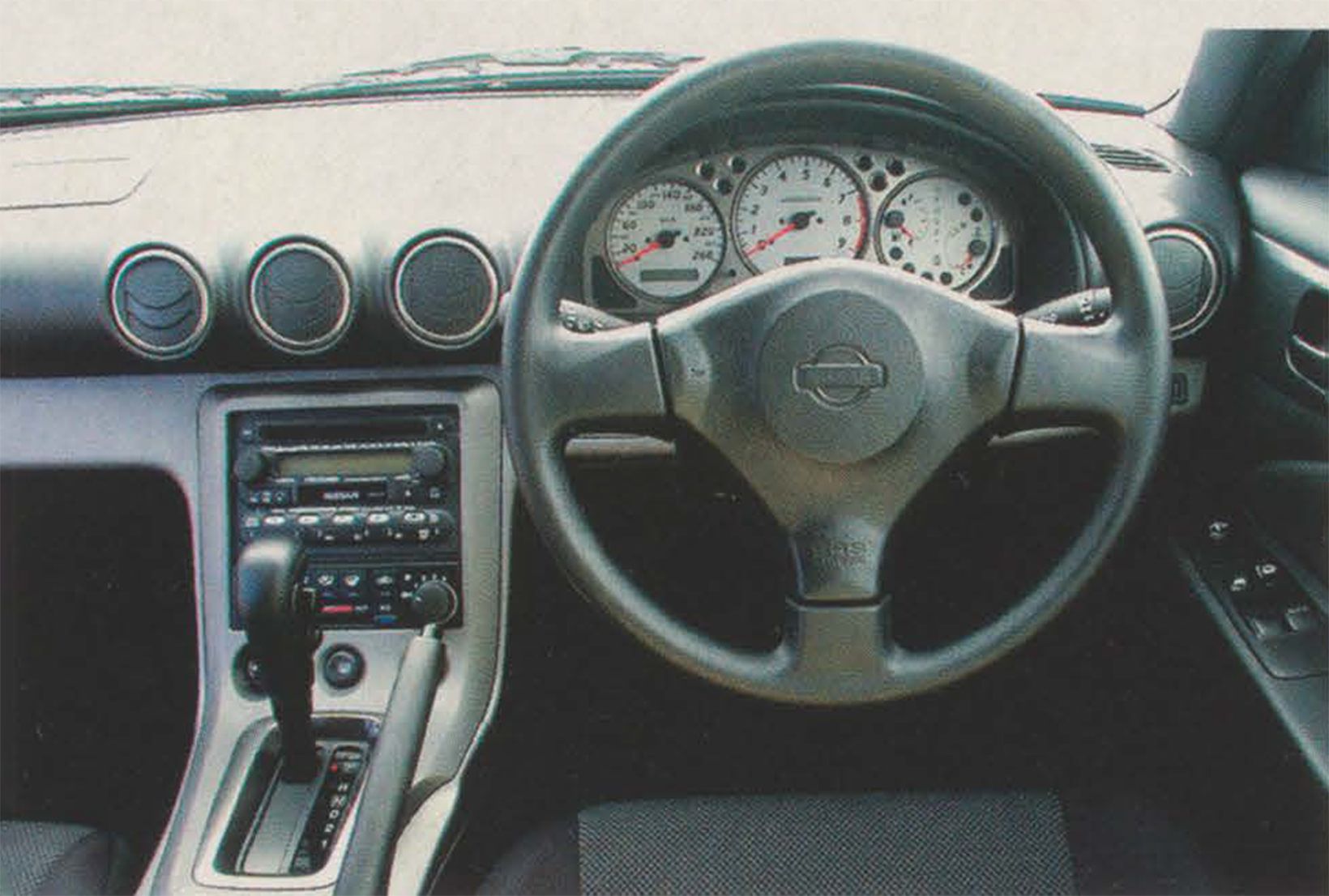 The interior is aptly upgraded throughout and is, for driver and front passenger at least, a very pleasant place. Simple yet shapely and supportive in all the right places, the front buckets are a lesson in comfort. The three spoke wheel and large, legible instruments are new, while the nacelles for the (five) excellent vents are a fitting retro touch from earliest Datsun Z car days. The simple, functional centre stack looks good and works well, too, as does the tunnel console with its integrated cupholders and hidded bin. 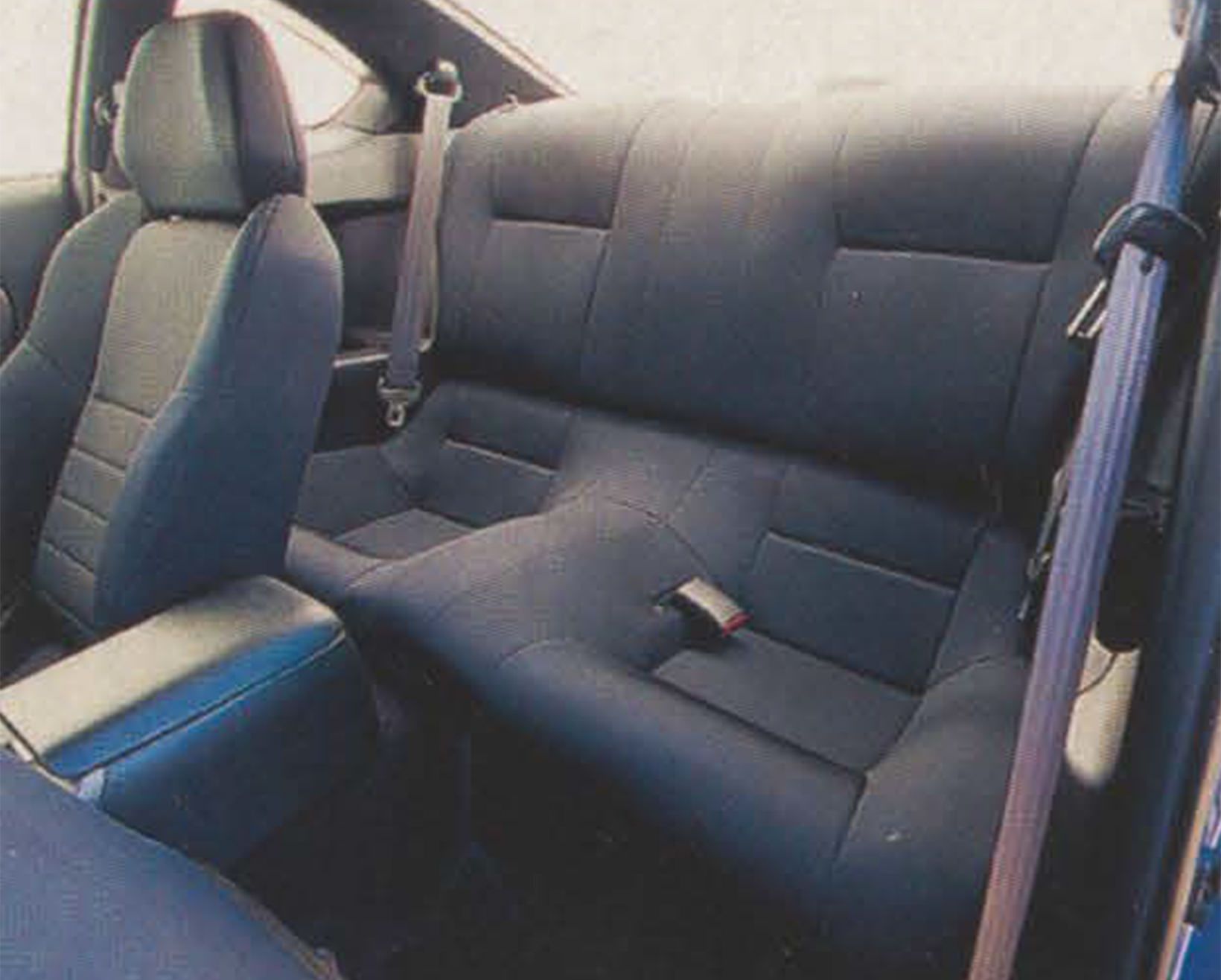 Though the upmarket Spec R version has a high-line audio with in­dash CD six-stack, its standard sunroof reduces headroom sufficiently to make the otherwise identical Spec S version (for which the body kit is optional) the more comfortable choice. As ever, the plus-two rear seat is only a gesture, for its head space and knee room are far short of adult dimensions. But that's expected, of course. Best things about the rear seat are the large bins either side and the folding backrest, which opens to a deeply stepped but comparatively generous boot. There's enough capacity for golf clubs or the weekly groceries. But not for big eaters.

The Silvia hasn't re-invented the coupe but has successfully linked balanced handling, performance and features. Looks damn fine, too.