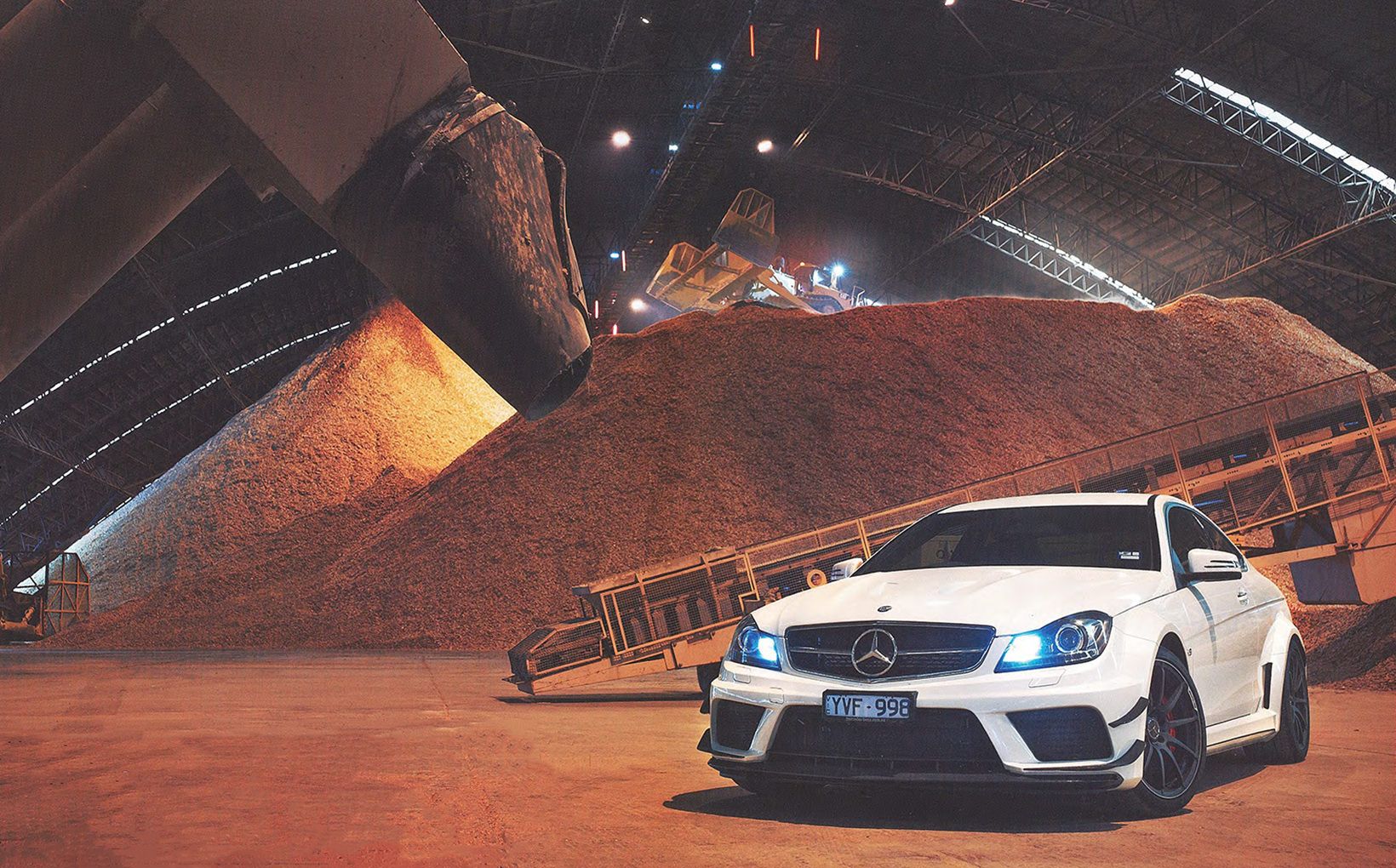 This must be how it feels to win a date with a rock star. Or to have a rock star win a date with you. Saturday-Sunday: on television I watch Mick Doohan thundering around the Albert Park GP circuit, chased by a V8 Supercar and a McLaren-Mercedes, in the first and only C63 AMG Coupe Black Series in the country. Wednesday-Thursday: that car is mine.

I get mixed messages. The Merc’s minders stress that, outside the company and the odd, five-times world motorcycle champion, I’m the first to drive it. There’s just this one, until nearer the on-sale date in May. And it’s worth $266,000, including optional paint, wheels and $16,000 of dangly aero wings and splitters. Of which please be mindful, as there’s no park-sensing system.

But those 19-inch tyres, says the Mercedes man well, we shall be very disappointed if they don’t come back looking like molten gorilla snot. 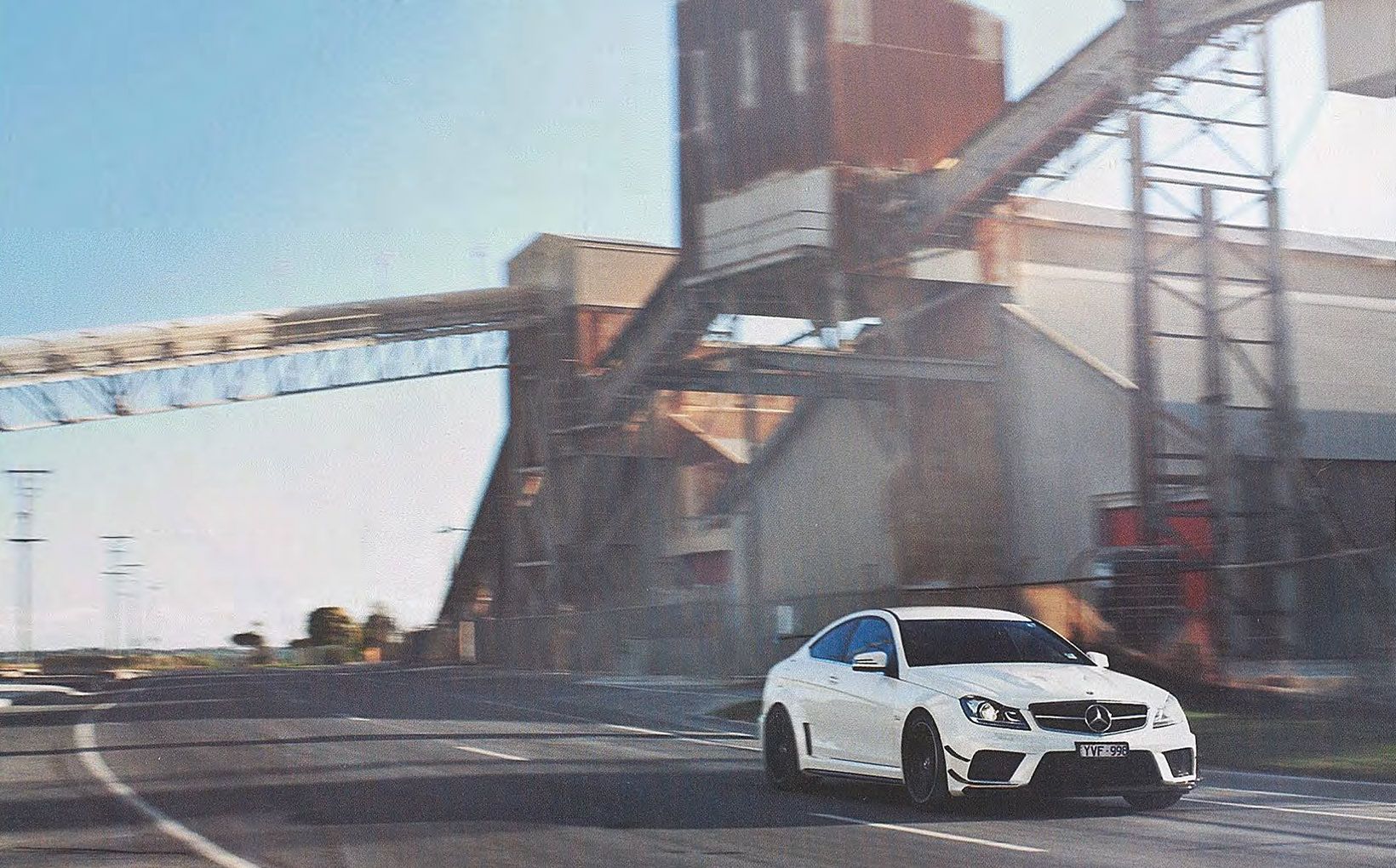 AMG’s Black Series mega-Mercs inhabit their own genre of art house heavy metal. They probably owe their existence to arch-rival BMW’s M division, whose carbon-roofed E46 M3 CSL of 2004 stepped out of the comfort zone and into track-day territory. AMG’s lightened, tightened Black Series is intended to reclaim some dirty-knuckled tuner credibility and bespoke exclusivity.

Benz won’t yet put a figure on the number of C63 Blacks to be built. The Australian allocation of 32 units has already sold out; there are hopes of securing a further 10. It’d want to remain pretty exclusive, as its list price of $245,000 represents a hefty $90K over the standard C63 AMG Coupe, or $75K over that car with its optional Performance Pack. That’s before one even adds the Black Series’ distinguishing aeros.

AMG’s claim that this is the most powerful C-Class model in history leads our inner nerd to calculate, apropos nothing, that the Black Series is 3.3 times more powerful than a base C180 Coupe, and more than four times the price. 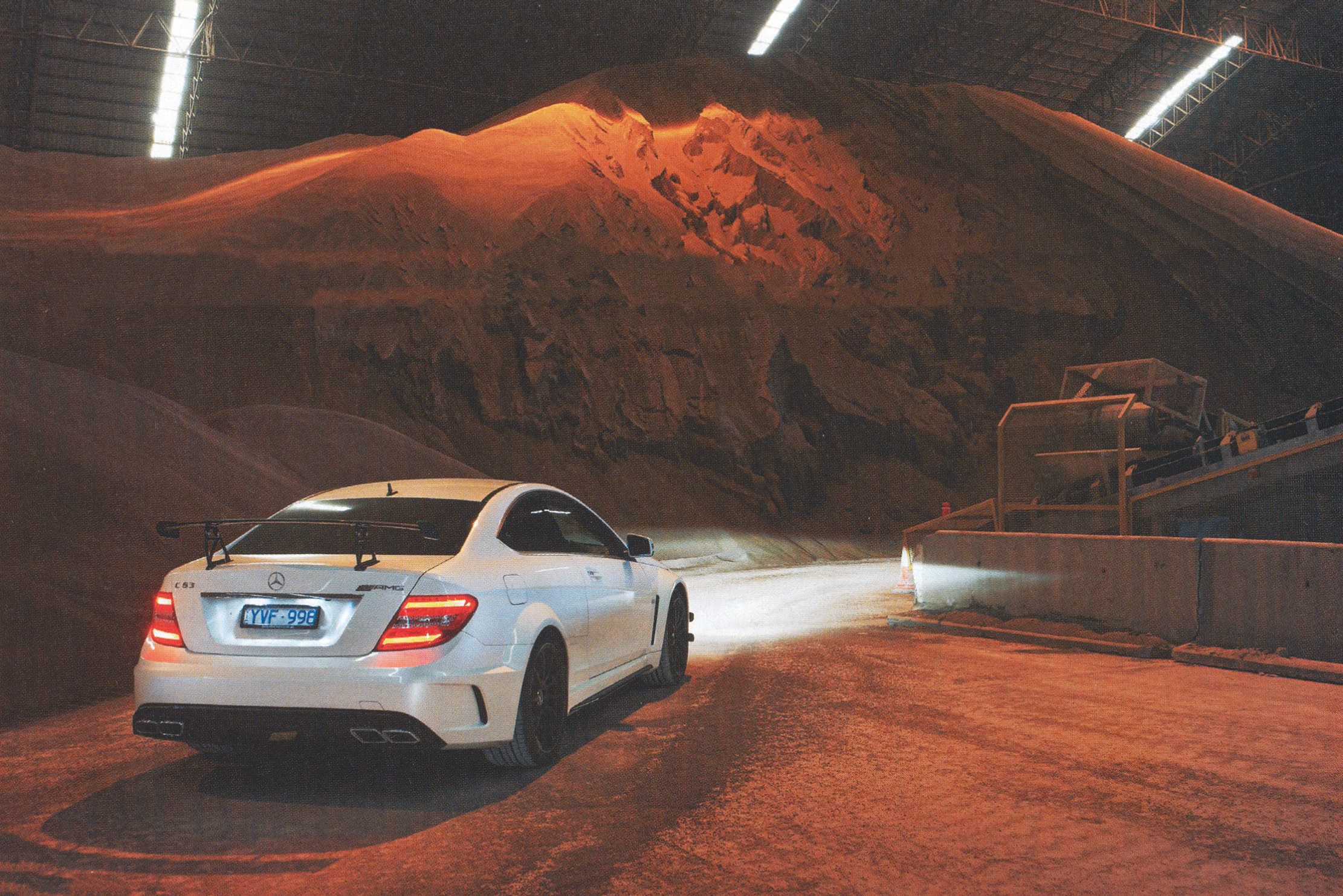 Seems like a lot of money for trimming three-tenths of a second from the standard C63 Coupe’s respectable 4.5-second 0-100km/h time. Which, non-Euro snobs will point out, still leaves the Black Series a mere, uhh, 1.4 seconds adrift of a Nissan GTR that’s 30 percent cheaper.

We’ve known since the 1930s that piped muzak stimulates metabolism, reduces fatigue and increases worker productivity. But we wouldn’t want to live in a world without White Zombie.

In our time with the Black Series, onlookers were magnetically sucked toward it. Some recognised the car from its high-profile AGP outing. Many more were drawn by the pearl-white bodywork with its optional $16K aero package (see sidebar p66); yet others by the testicle-cupping V8 rumble that simply undermines any boundaries of culture or class.

In fact, when asked by a few who didn’t quite understand the car, I found myself thinking less of Deutsche Tourenwagen Masters or of tenuous Formula One connections, than of something much closer to home. On describing it as “the HSV of Mercedes”, people’s eyes lit up in recognition. 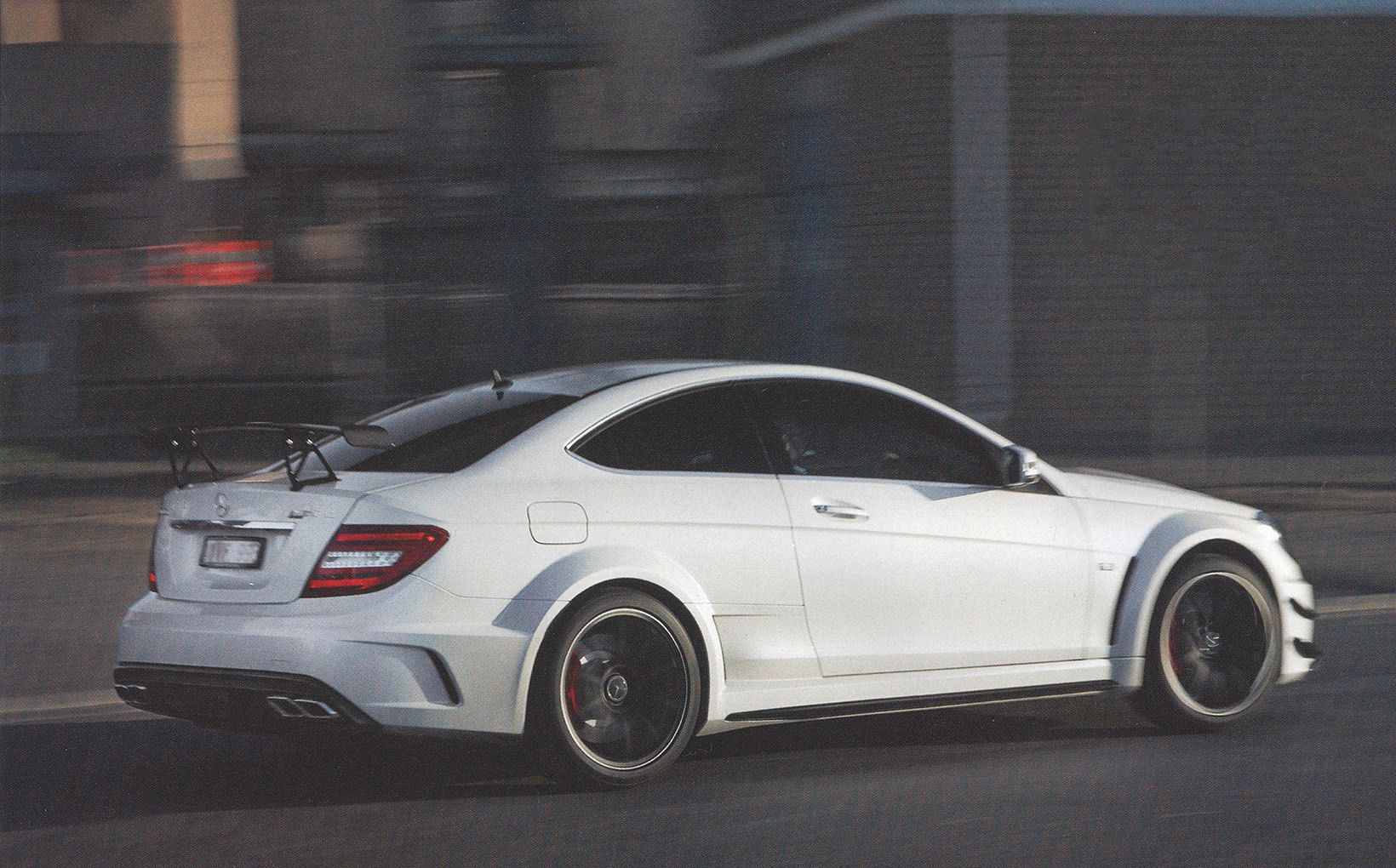 That’s pretty much where it is. The Black Series is, expectedly, more focused and accomplished than anything out of Clayton, and with its vastly fattened tracks, fairly stiff (and pitch-prone) suspension and composite brakes, seems to aspire to the capabilities of Porsche’s GT3 RS. Yet, at 1710kg, it’s a good 300kg over the odds for a true, trackday terror.

The twangy responsiveness of its throttle, in Sport mode and upwards, and the immediacy of its steering put it surprisingly into the Porsche ballpark; yet the dug-in front grip and the dial-an-attitude torque put in mind the Aston Martin Vantage. Perhaps it’s most like a BMW M3, and yet it isn’t: the Black is more squat, more bullying, less delicate.

Like the Nissan GT-R, the Black Series isn’t something in between. It’s something distinctively different.

The Black Series’ 6.2-litre M156 engine kicks off where the standard AMG’s Performance Pack ends. That package brings forged pistons, conrods and a forged steel crankshaft, all borrowed from the big- brother SLS, to reduce the engine’s internal weight by three kilos.

Whereas the regular C63's Performance Pack raises power by 22kW, to 358kW. (torque is unchanged at 600Nm), the Black Series dumps a further internal kilo, gains a new ECU and improved oil cooling to step up to 380kW and 620Nm. Peak power occurs at the same 6800rpm - redline is at 7200rpm, impressive with those 10cm slugs - while the torque peak is now 200rpm higher, at 5200rpm. 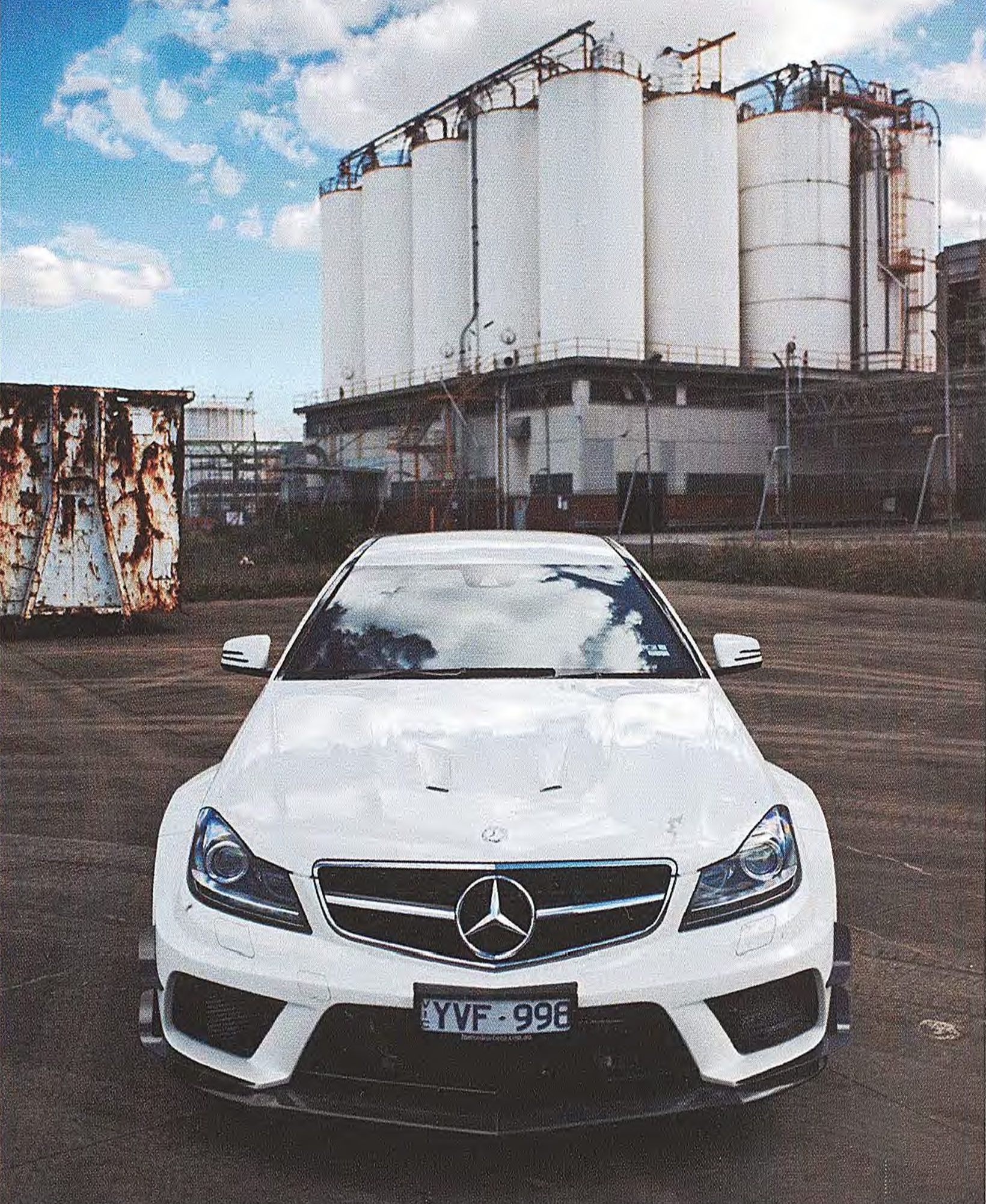 Drive goes through AM’s familiar Speedshift MCT, a variant of Benz’s seven-speed automatic that uses multiple clutches in place of a torque converter to deliver the responsiveness and efficiency of a manual with the smooth shifting of an auto. No slush and no slouch: in the upper two of the four drive modes (Comfort, Sport, Sport-Plus and Manual), throttle responsiveness is beautifully sharpened and full-throttle shifts happen in 100 milliseconds.

Remember that, and the Sport/Sport-Plus/Manual modes’ throttle blipping prowess, when you’re guiltily standing on the fabulously responsive brakes, composite up front with six-pot calipers: your slowing will be accompanied by a great, sharp shoeful of V8 bass boom as the box drops down two cogs in one step.

The transmission’s drive modes also relate to the ESC, which offers Sport handling and Off in addition to its default On. With Sport engaged, via a quick stab at the AMG button, the drive mode rotary switch accesses Race Start.

It was impressive to feel the mammoth, 285/30 R19 rear ContiSportContact 5P rubber muscling and burrowing for grip on a dusty, industrial back street. But not as impressive as what happens when the button’s held down for a few seconds longer.

Snapper Furnari asked for the standard pan-shot; a drive-past at about 50km/h. “If you like, I can have the rear wheels doing 100.” A standard differential lock, active on both acceleration and deceleration, tames this trait on track days. 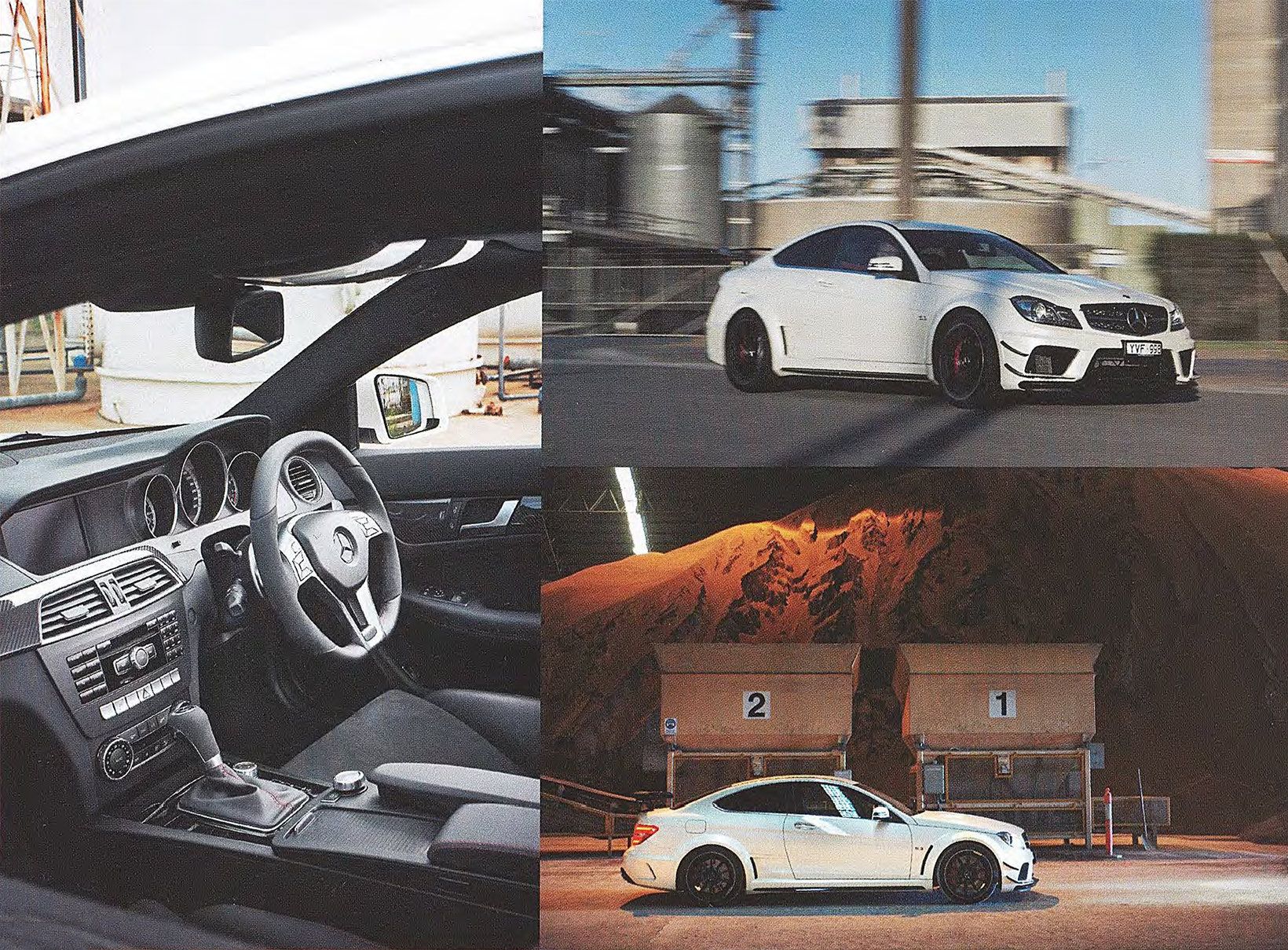 The Black Series’ body looks different because it is. It’s fatter and squatter, the front arches each punched out by 28mm and the rears by 42mm, to cover massively broader track widths (40mm and 79mm, respectively). The suspension is every bit as racetrack-oriented, being coil-over adjustable struts and dampers, with everything around it specifically tuned for this car.

The various splashes of carbonfibre about the exterior and interior - where our car had the no-cost option of twin, carbon-backed race seats and a deleted rear bench (seats are otherwise standard C63 AMG front and rear) - are really only decorative. A full-house, standard C63 Coupe weighs only 20kg more.

And the Black Series can be a somewhat demanding car. The ride, even in Comfort mode, remains firm and quite pitchy on average surfaces. Sport and upwards are really best left to race circuits, where you won’t experience the rear end’s flustered response to mid-corner bumps, made more apparent by the resolve of the front end.

There, you’d also appreciate the one-piece racing buckets which, on the road, disappointingly lack lumbar support, sit you riceboy-low at the wheel and are a burden to climb in and out of.

Are we complaining? No. Just peeved that we didn’t get to take it on a racetrack, where we could have turned it up to 11 and truly tortured those pesky polymers.