Lotus Seven: Survival of the Fittest 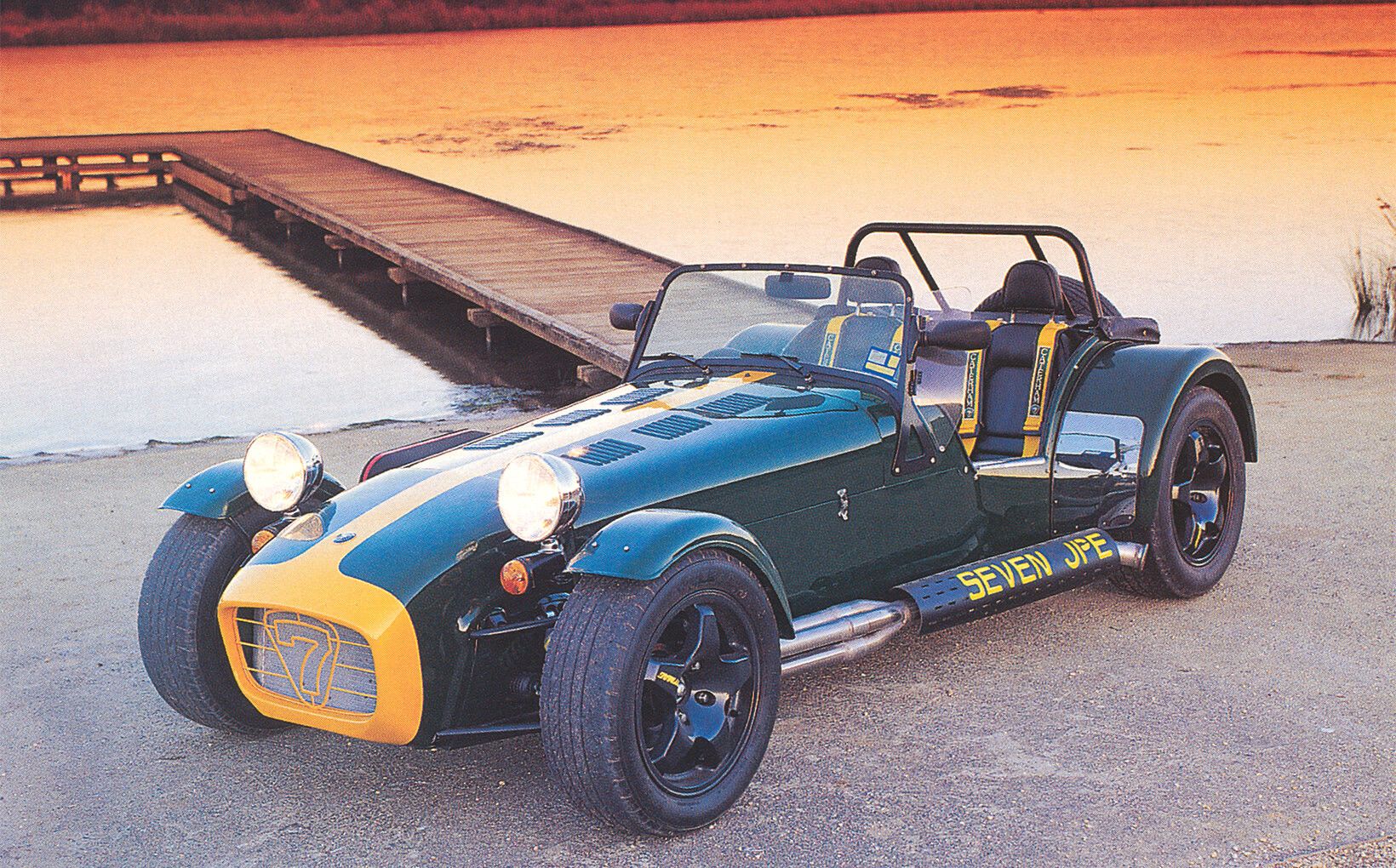 On August 28 of 1963, when Martin Luther King was making modem history in the deep-toned pulpit voice of a Baptist minister, another man with a vision had seen his idea reach six years of age. The recurrent theme of King's speech that day in Washington DC is remembered to this day: "I have a dream," he boomed, again and again

Colin Chapman was the man whose dream had already achieved a degree of maturity. The price of Chapman's much smaller vision was not some bigoted assas­sin's cowardly bullet. In fact, at the time the young English structural engineer and founder of Lotus asked a little less than 600 English pounds, or a bit more than 3000 US dollars. 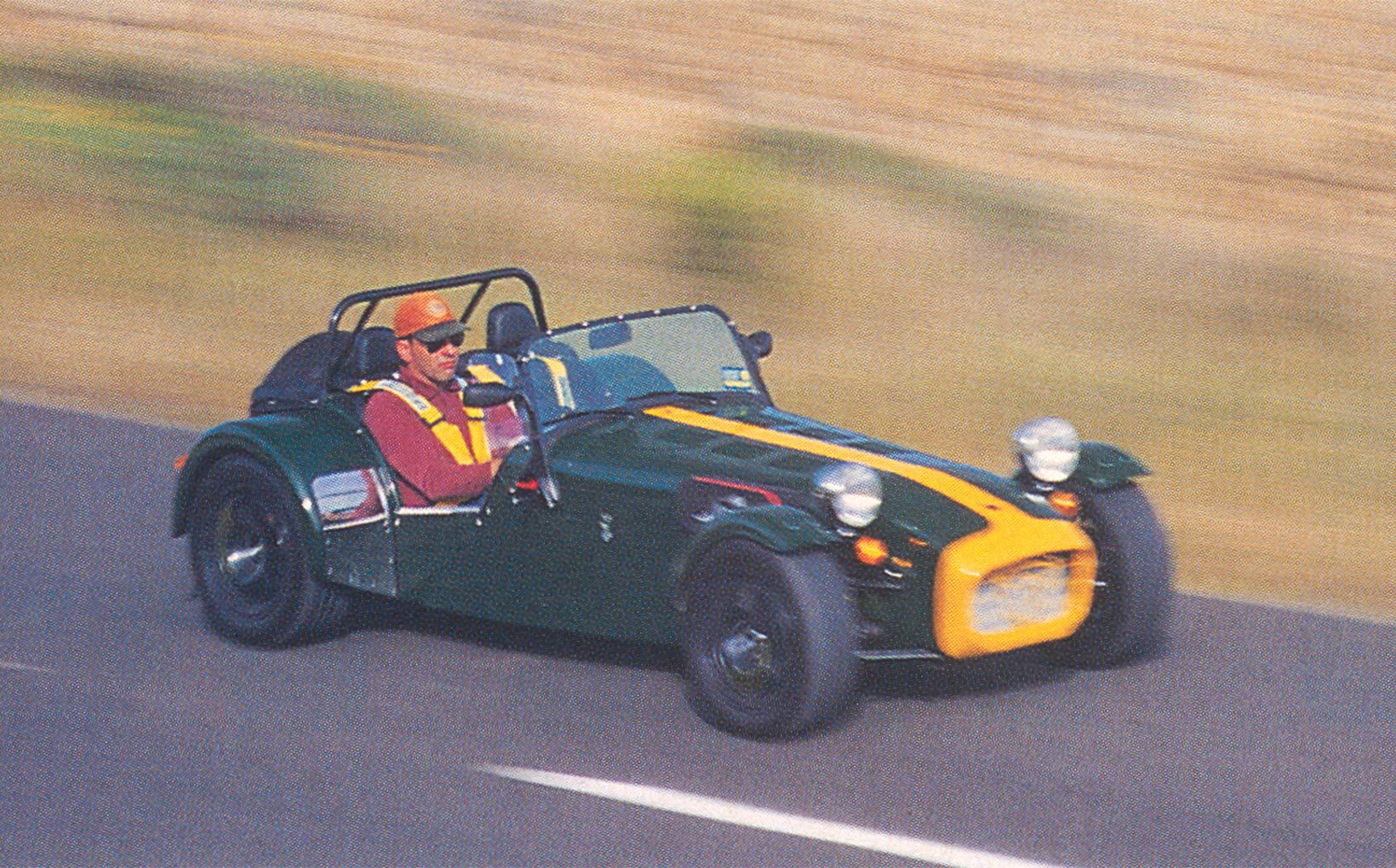 "The Seven was the car I dreamed about as a schoolboy," Chapman once said. "When I got the chance to build it, it was the most basic, lightest, high-perfor­mance little car we could come up with ... "

It was a simple notion that has endured on this planet a year longer than I have myself I can't exactly remember when the Seven first invaded my car consciousness, but it was certainly early on. In comparison with the other cars I considered desirable at the time - mainly English sports cars of the then not-so-distant '60s, I must sheepishly confess - the uncompromising, minimalist nature of the Lotus Seven exercised a pow­erful fascination

Less car, more performance. The per­fect sense of this relationship in inverse proportion was seductive. But this driver's dream was, surely, an impossibility. I mean, I'd never even seen a Seven. How likely was it that I'd ever drive one?

Of course, I kept up with the Seven's progress down the years, reading every­thing about the car I could lay my hands on - magazine articles by the dozen and the occasional worthwhile book, most memorably American Dennis Orten­burger's early '80s Legend of the Lotus Seven

Even five and a half years working on Wheels, where the modus operandi is - mostly- coolly cynical and ruthlessly ratio­nal couldn't dent the aura of my teenage fantasy. The big difference was that I no longer had to spend my own money on magazines containing Seven articles. 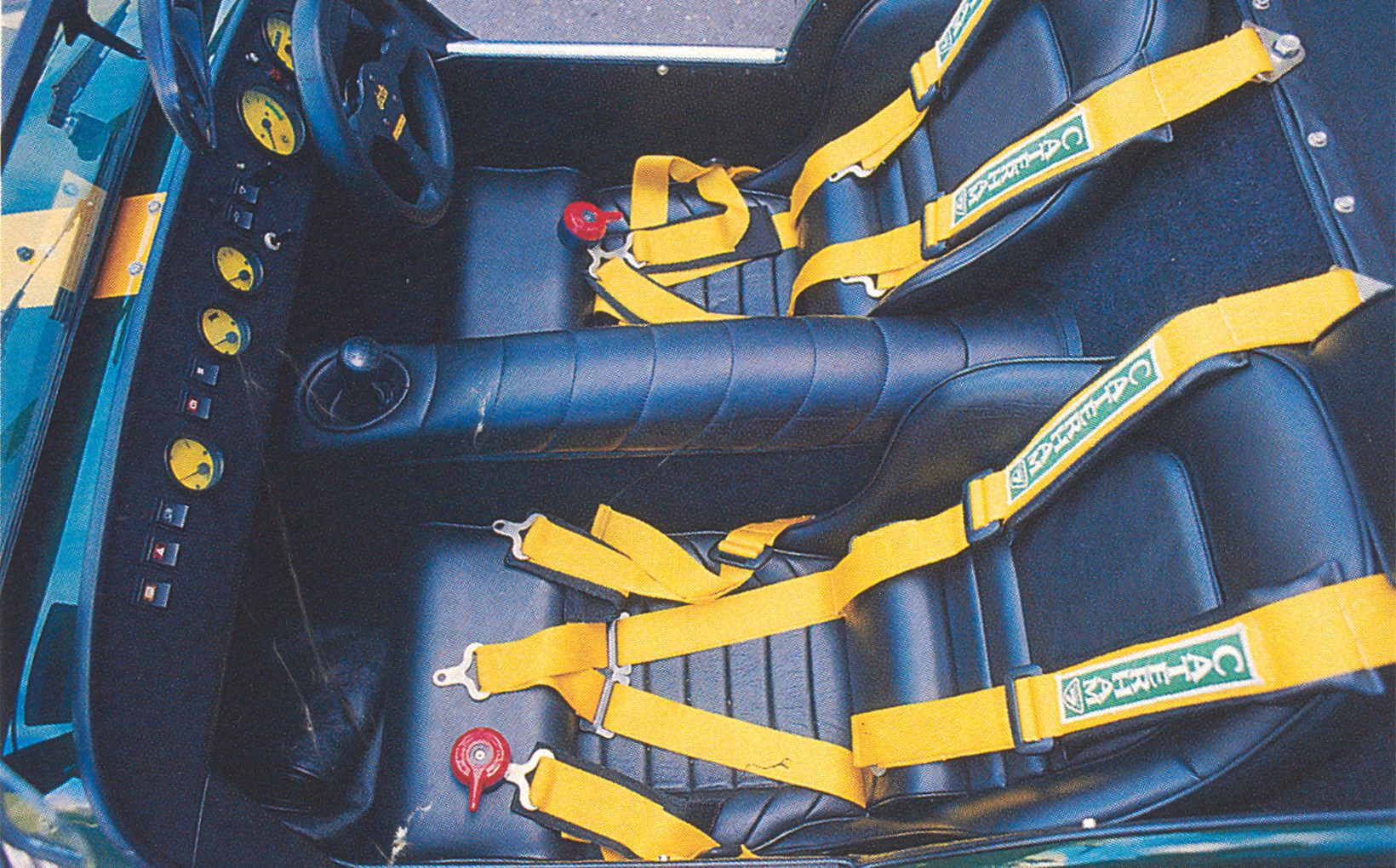 It was from one of these I learned with some interest of the development of the most extreme statement yet of the Seven concept. The Caterham Seven JPE.

Those last letters stand for Jonathan Palmer Evolution. The doctor of medicine, former F1 driver and now deputy grand prix caller to Murray Walker is evidently a Seven aficionado. He was of vital help to Caterham in the delivery of this 540 kg baby in 1992

There are 250 rather special things about the JPE. Or 186, depending on whether you prefer horsepower or kilowatts. At a screaming 7750 revs

While the engine is essentially the same 2.0 litre twin cam you'd find beneath the bonnet of a front­drive Holden Calibra manual, it's had everything done to it which a 70 per cent power increase indicates.

As if to demonstrate impartiality, the gear­box is a trusty Ford five speed.

Doctor Palmer also prescribed suspension, wheels, tyres and brakes best suited to the racetrack. And carbon fibre and aluminium for nosecone, cycle guards and radiator. And somewhere along the way, lurid fluorescent paint was applied where colour is seldom seen - like on the coil springs, for example 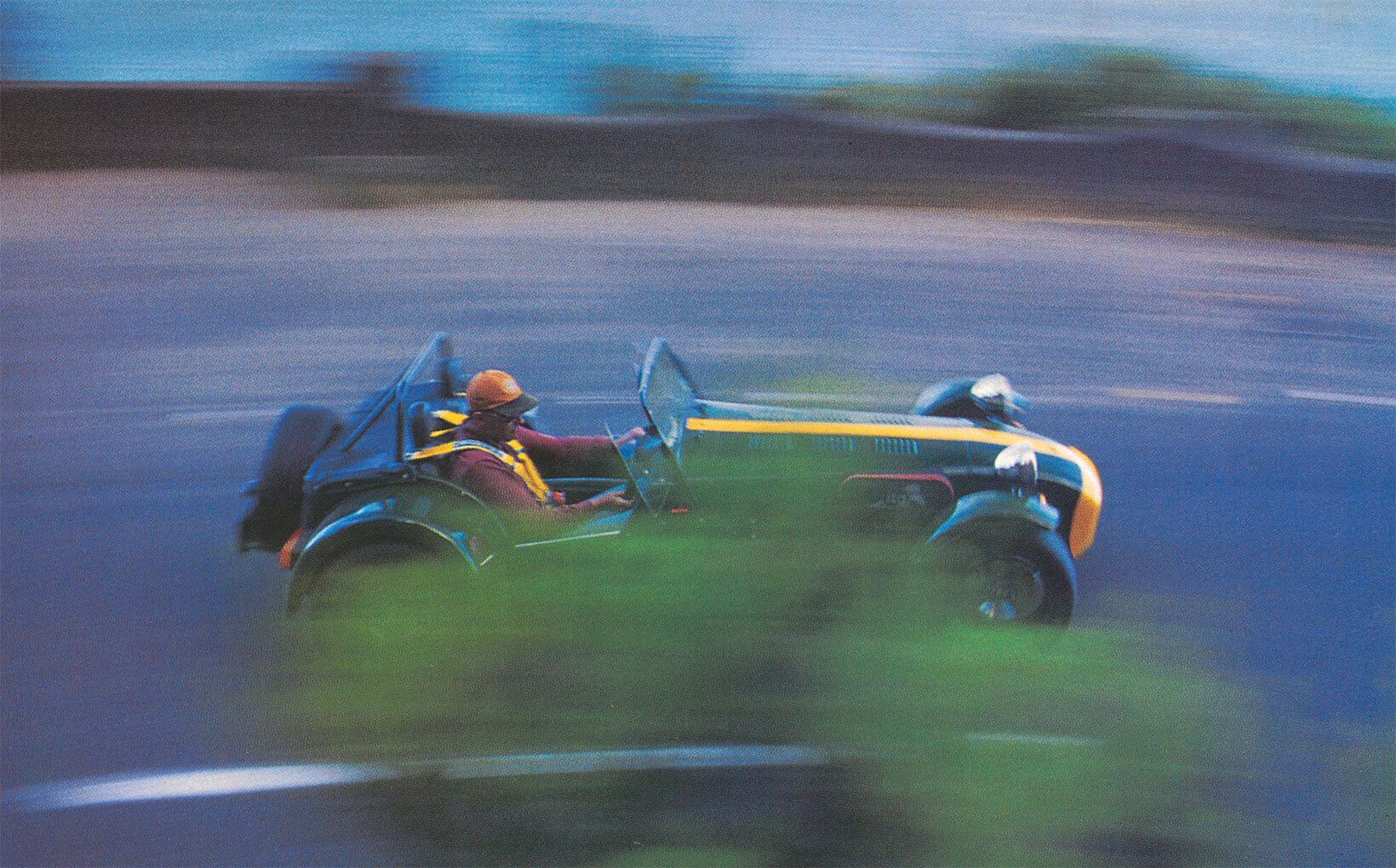 After a certain amount of dicking around, this journalist laid down a run of nought to 60 miles per in 3.5 seconds. It's the kind of ballistic acceleration number that really grabs the attention. Aside from middling to large motorcycles, the only other road-usable vehicles on this planet capable of generating such figures are the quicker mem­bers of the supercar clan like the McLaren F1

Then in 1994 it became possible, for the first time in many moons, to buy brand new Sevens in Australia. Melbourne-based Monarch Motors specialises in interesting imports. Beginning with Lotus, the com­pany has built up its business to include Bugatti, TVR and Caterham products

For one Australian, who wishes to remain anonymous, the 1.4 litre Caterham Seven K-Series - named after its Rover sourced engine - just wasn't enough. And no, this customer didn't have a problem with Wheels driving his Super Seven JPE

It was everything I'd fondly imagined for a couple of decades ... and then some more I hadn't

What I wasn't ready for was the pain. Driving the JPE hurts. The noise is fero­cious. The induction rasp, as air is drawn through the foam air cleaner protruding from the right side of the bonnet and into the four injection throttle bodies, is amaz­ingly loud. Exhaust noise is tremendous, especially when the 2.0 litre really starts to honk past 5000 revs. On a steady throttle at middling revs, in every gear but the direct fourth, gear whine is dominant. This particular component of the racket drills straight to the headache centre of the brain 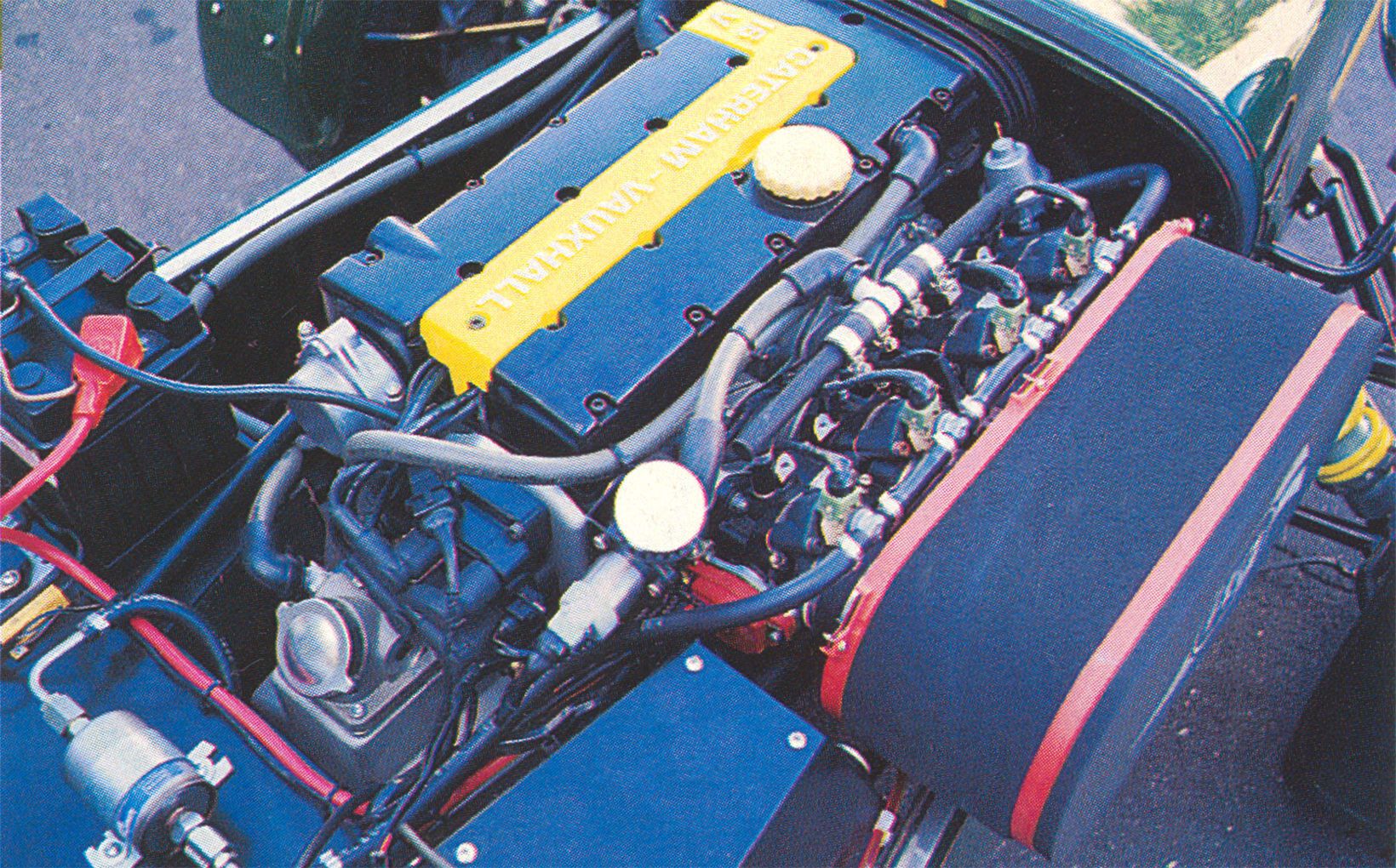 And from 100 km/h and up, the wind deals a battering to the upper body. It'd be interesting to put a Seven in a wind tun­nel, because turbulence pummels the head from three different directions

Sunglasses are the minimum protective equipment necessary to stop eyelashes ending up where they shouldn't. But they're not effective against the gravel flung into the cockpit by the broad Yokohama tyres. Painful hits to nose and ears make the decision to pull on the full­face Shoei easy

I laughed a few times, too. When overtaking mainly. The JPE is capable of instant, furious acceleration. Just so long as you're in the right gear. There's a green section on the little fluoro-faced tach, spanning the region between 6500 and 8000 revs. The engine only comes alive above 5000, but the green zone is an accu­rate guide to the most effective part of the engine's operating range. And the unbe­lievably stubby lever is a wonderful ratio switcher which snaps from slot to slot as fast as you can think the motion

Extravagant throttle-blipping down­shifts are somehow appropriate and natur­al in the JPE. And when second is the right gear for passing 80 km/h dawdlers on the open road, what more excuse is necessary? The muffler - ho, ho - means such drivers will be aware of your presence even if the Seven is too low to show in their mirrors

Though it's easy to access the JPE's performance when the car's already in motion, it's another story launching the high po rear driver from a standing start. It took time, patience and quite a number of attempts to get the JPE below the 5.0 sec­ond barrier for 0-100 km/h, some way short - damn! - of the best English effort. This best run also resulted in a 13.1 second 400 metre time

The Seven's steering is beautiful, but the JPE's handling on the public road is well balanced only in the sense that both ends bump steer. There's precious little suspension travel and it's easily consumed by the irregularities all too common on typical Australian backroads

On a racetrack, though, I strongly sus­pect it would be a very different matter. There the JPE's thundering engine, light weight and smooth surface suspension set­up would probably make it blindingly fast

But driving it on the road was, for me, the end of a dream