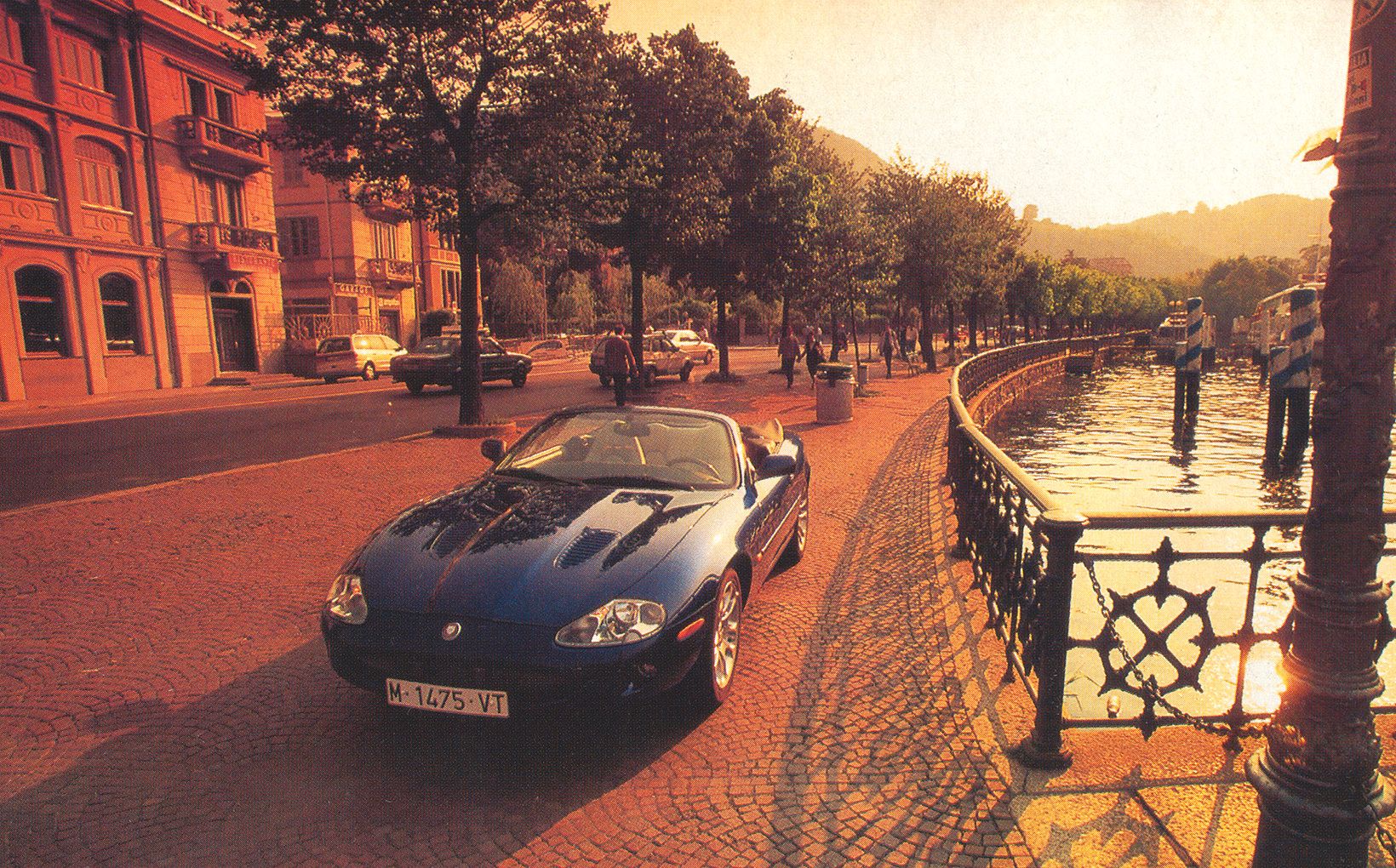 Grand Turismo. It’s been cruelly bastardised on everything from boy racer Ford sedans to wide track Pontiacs, but the term still evokes images of powerful, elegant coupes pounding down the autostrada at 200km/h, scattering Fiats like autumn leaves en route to Como, Venice or Portofino. A GT should be a car capable of effortlessly crossing continents – and encouraging the odd, exhilarating detour over a serpentine mountain pass, a car that at the end of a long day leaves the driver stirred, not shaken, and ready for a chilled Dom Perignon on the terrace before dinner. A car just like the new Jaguar XKR. 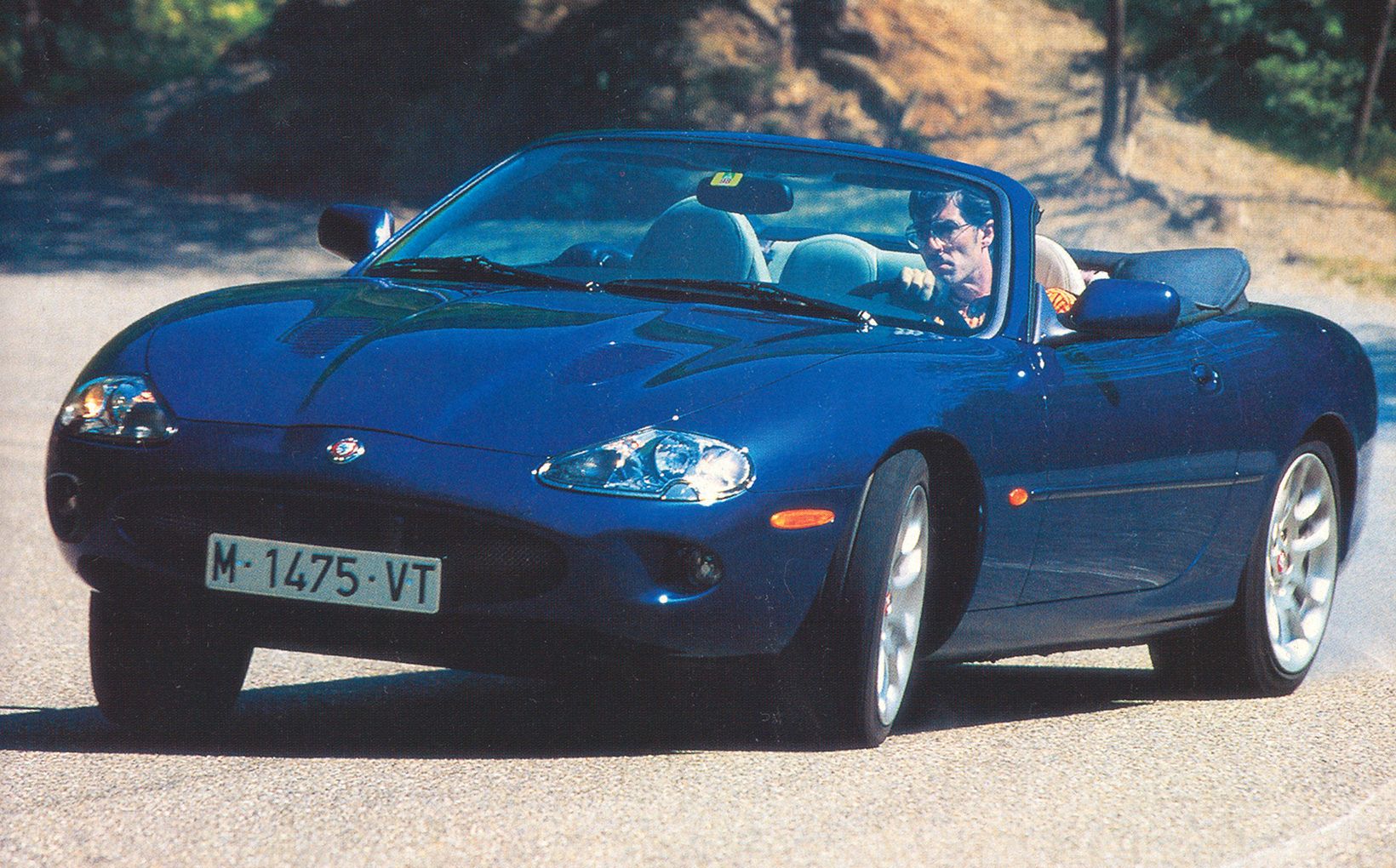 The logic of marrying Jaguar's potent blown 4.0 litre AJ-VS engine from the storming XJR sedan with the sensual XKS coupe and convertible was simply inescapable.

“We couldn't have a sedan as the fastest Jaguar in the range," explains Jaguar vehicle and chassis engineering chief Paul Walker. The reality is simply irresistible. The Jaguar XKR supercharged and supercar fast, as stylish as a black Armani suit on the outside, laden with wood and leather on the inside - is as true a GT as has ever been built.

It's also the measure of an accomplished, confident Jaguar team. The success of the )QR sedan saw the XKR program pulled forward 18 months from its original target launch date of late 1999. And yet in almost every dynamic aspect -performance, steering, ride, handling - the supercharged sports car is just that much more refined and that touch more polished than its four-door cousin.

Amazingly, the original underbonnet packaging work on the XK8 did not account for the eventual fitment of the supercharged engine. Shoehorning the 276kW AJ-V8, with its Eaton M 112 blower and t\;vin liquid-to-air intercoolers sitting atop the block, therefore involved more than a little nip and tuck, says Walker - especially as the Jaguar engineers wanted to maintain the engine in exactly the same configuration as that of the sedan to keep a lid on manufacturing complexity and costs. 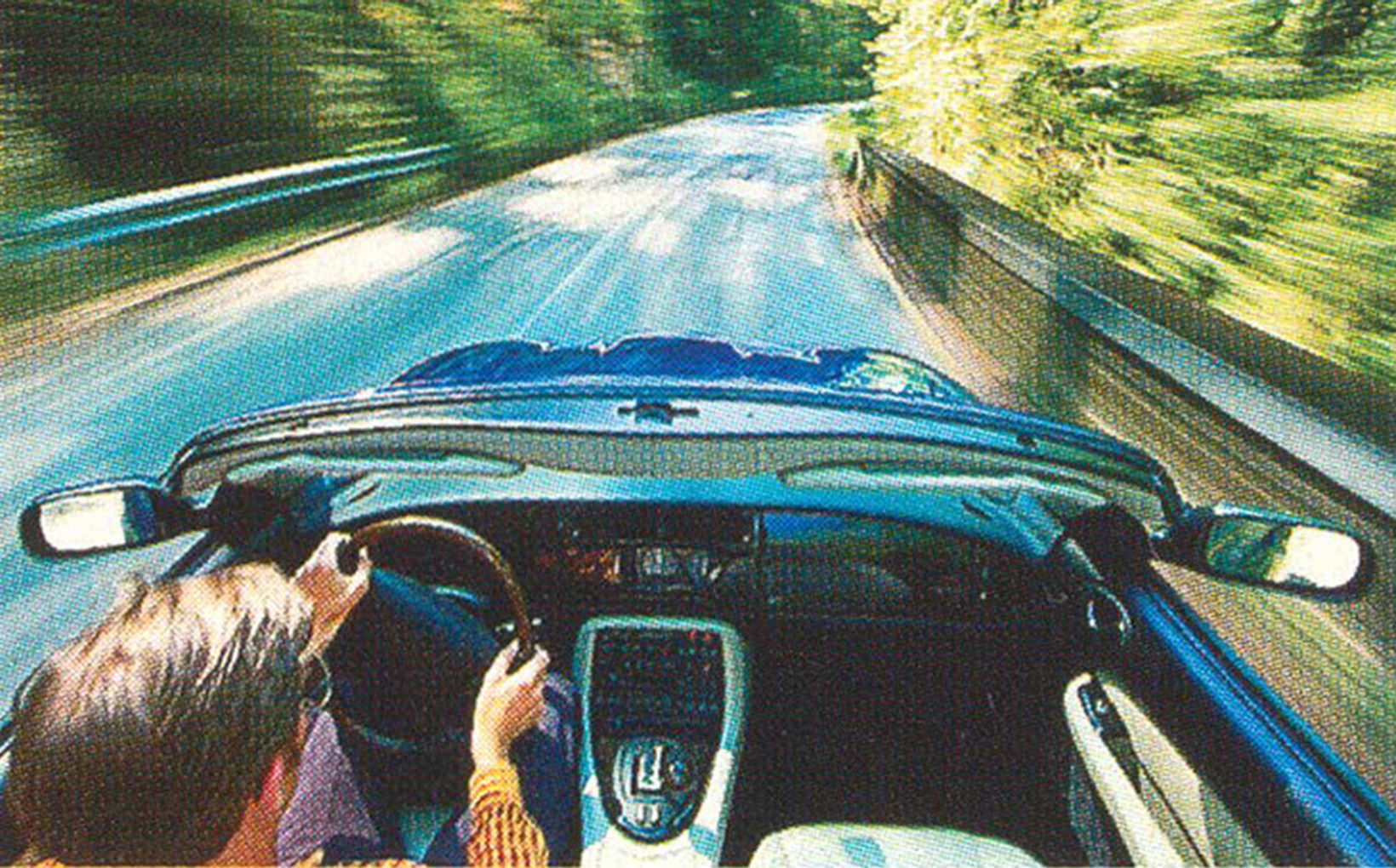 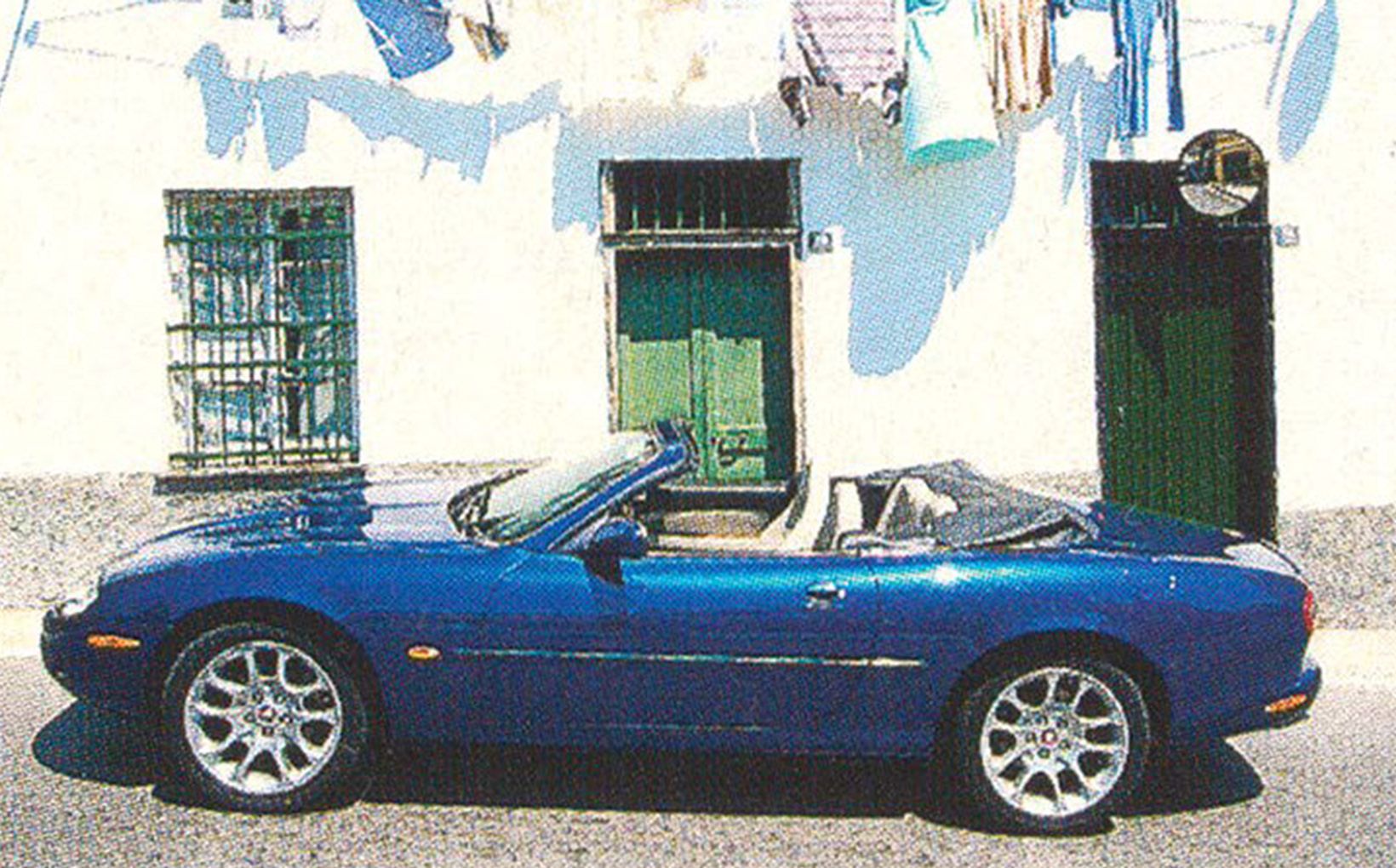 Higher underbonnet temperatures – an average of 12 to 14 degrees centigrade higher to be precise - meant the XKR also gained a discreet rear spoiler. Huh? It works like this: The power steering cooler was moved to improve airflow to the radiator and a pair of vent5 were cut into the bonnet to release excess heat. The vents also reduced the air pressure build-up under the bonnet at speed, thus reducing front-end l.ift. Hence the small lip on the XKR's rounded rump, which actually cuts rear end lift by about a third, says Walker, and helps balance the car. Attention to detail ...

Although mechanically unchanged from the XJR version, the engine's electronic brain has been recalibrated to account for the XKR's slightly different intake and exhaust characteristics and lighter mass. Jaguar claims the engine already meets likely 2000-2001 European emissions targets. The Daimler-Benz W A580 five­speed automatic, which drives the rear wheels through a wo-piece prop-shaft similar to that developed for the XJR, has also been optimised to retain its characteristic velvety shifts.

Walker says the XKR coupe will sprint from 0-100 /h in just 5.4 seconds, or roughly a couple of tenths faster than the ) QR sedan. By our calculations, that translates to a two-up standing 400m time of just under 14 seconds, give or take a tenth. We're talking 911 territory here, despite an automatic transmission and 1640kg kerb weight which puts the XKR coupe at a 320kg disadvantage over the Porsche. The convertible is a not inconsiderable 10kg heavier again, but only a tenth or so slower, according to Walker. 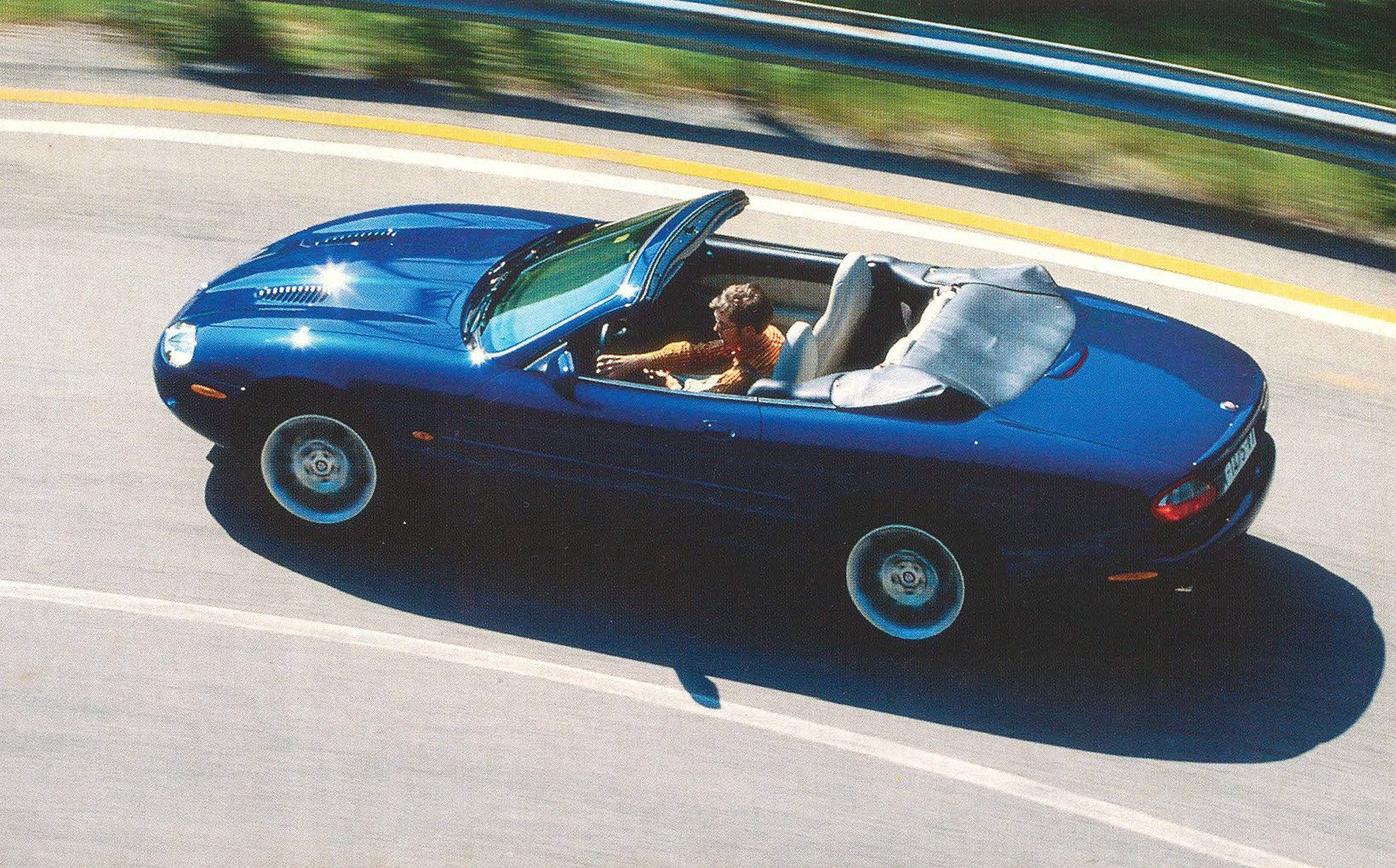 Forget kilowatts: This is a Titanic 525Nm of torque at 3600rpm here. The supercharged AJ-V8 is a unique and characterful high performance engine. The sensation, when you squeeze the XKR's throttle, is of an elastic lunge at the horizon; from a standing start the big Jag simply gathers momentum with irresistible force. A dull bore, the engine note is an odd melange of NASCAR-stocker-booming­on-the-banking overlaid the with faint metallic keening of the Eaton blower spinning at several times crank speed.

Not surprisingly, the XKR is quite simply superb on Europe's high speed superhighways. On the arrow straight, lightly trafficked autostrada across Italy's steamy Po valley, it will cruise effortlessly at 220 or so; on Germany's crowded and manic autobahnen, the slingshot rolling acceleration - from 120 to 140km/h in less than four seconds, 160 to 200km/h in less than seven seconds and 210 to 240km/h in less than 12 seconds (that's 30 percent quicker than an XJR) - enables you to rapidly plug elusive gaps in the traffic.

It stays impressive through the high speed sweepers, too, like those north of La Spezia, near the Italian Riviera, or over the Brenner Pass into Austria. The XKR is the first production car in the world to use the new ZF Servotronic II power steering system. The speed proportional variable ratio is the same as on the XK8, but the system feels meatier and more linear in its response - helped, no doubt by the 17 percent stiffer rack bushes and the choice of 245/ 45ZR 18 directional Pirelli P Zero tyres fitted to the front rims. The rear tyres are wider P Zeros - 255/45ZR 18 - with an asymmetric tread pattern and a new sidewall construction for greater stability. 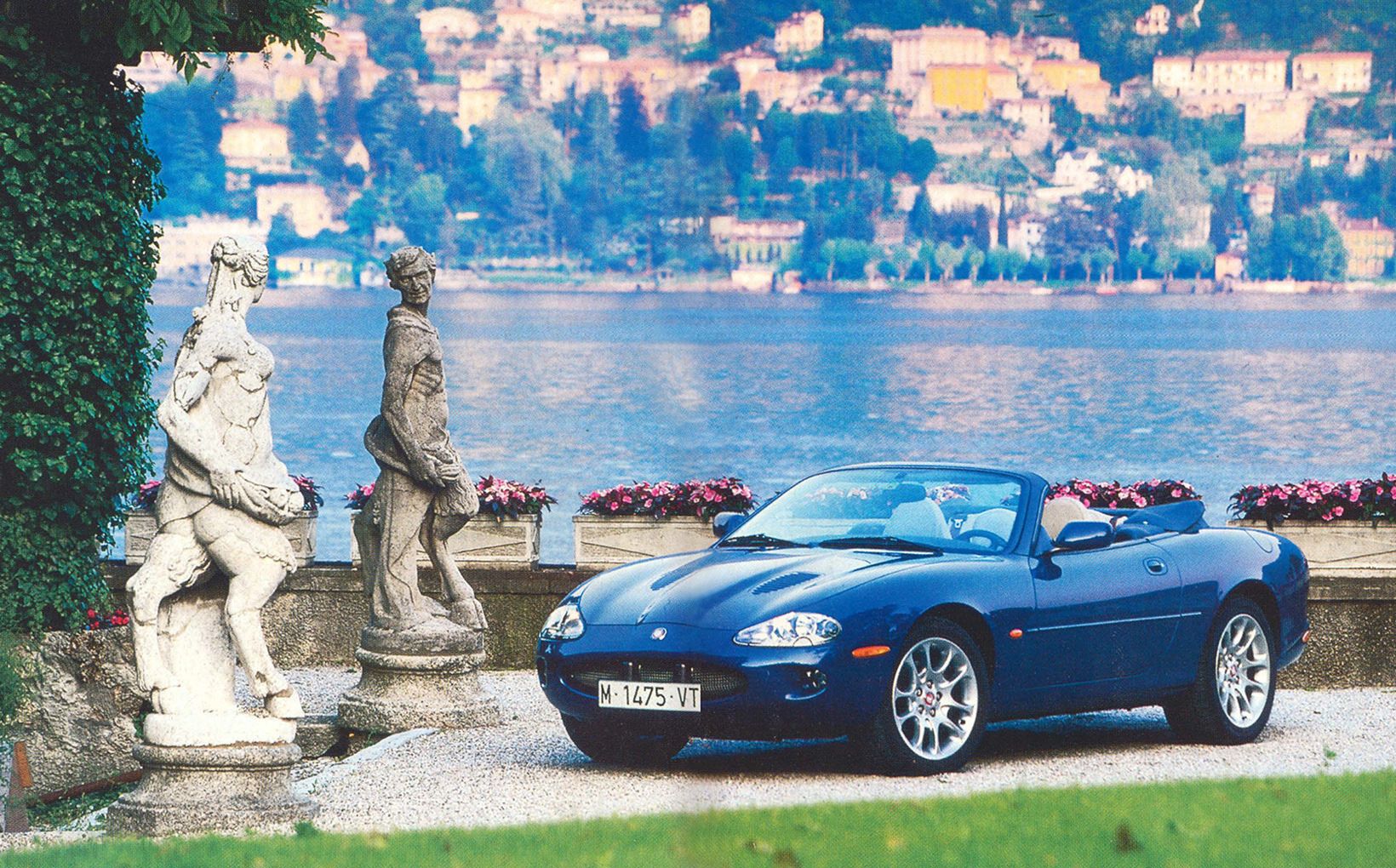 The suspension is modulated by a third generation version of Jaguar's CATS computerised adaptive damping system. Again, the most noticeable change is the improved linearity of the system's response - low speed ride, while firm for a Jaguar, is excellent for a car on 45 series rubber, yet roll, dive and squat remain well controlled when you get stuck in on the twisty bits. Part of the secret are new digressive Bilstein dampers with trick sintered valves that allow a more consistent oil flow regardless of wheel inputs.

This is no 911, but the grippy rubber, accurate steering and that tarmac melting torque mean the XKR is surprisingly quick point to point on back roads. When the bigJag finally does succumb to the laws of physics, it’s the front end that breaks away first. Get off the throttle, though, and the front tyres will bite, tucking the nose back into the apex; then it's back on the gas to get the rear end clawing at the tarmac as the big cat lunges for the next comer.

All that grunt means it's easy to get the traction control light strobing on tight comers; for maximum entertainment you can switch off the traction control and steer the XKR on the throttle. It's a benign, easy­to-drive chassis - one of the best balanced, most coherent ever from Jaguar - that telegraphs its intentions very clearly. Just remember, though, it takes up a fair bit of road when you do get it sideways ...

The brakes - vented discs front and rear, like the XJR - are strong and progressive, but you just know all those kilos and an automatic transmission are going to punish them very hard. And we're not great fans of the J-gate shifter - it feels clunky and takes the long way around the block.

There is no manual transmission - and no probability of one being offered in the immediate future. Paul Walker says research suggests barely five percent of potential XKR. owners would ever order one and, with XKR production initially pegged at just 1500 vehicles worldwide a year, spending the US$10 million or so required to develop a manual transmission package simply doesn't add up. 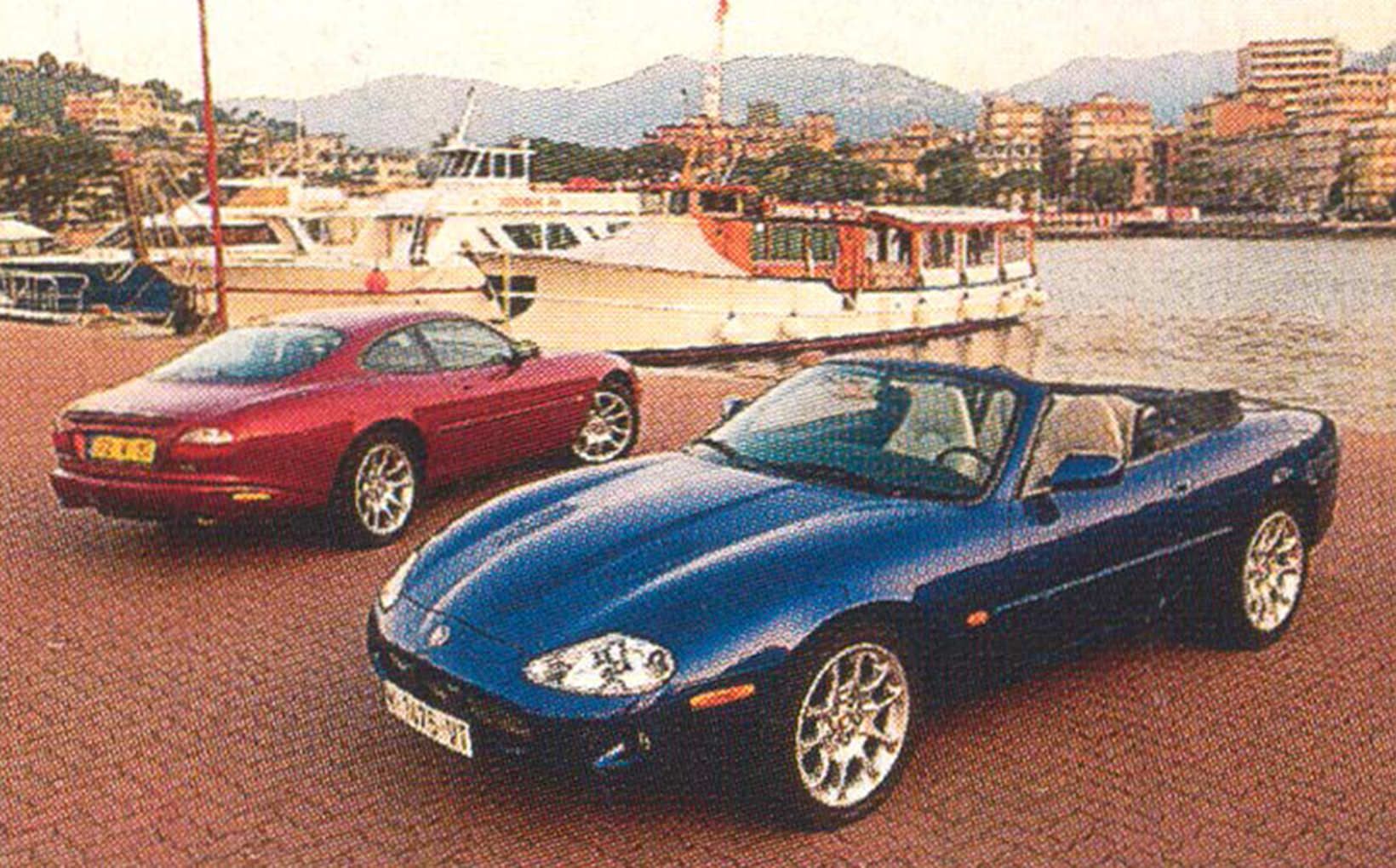 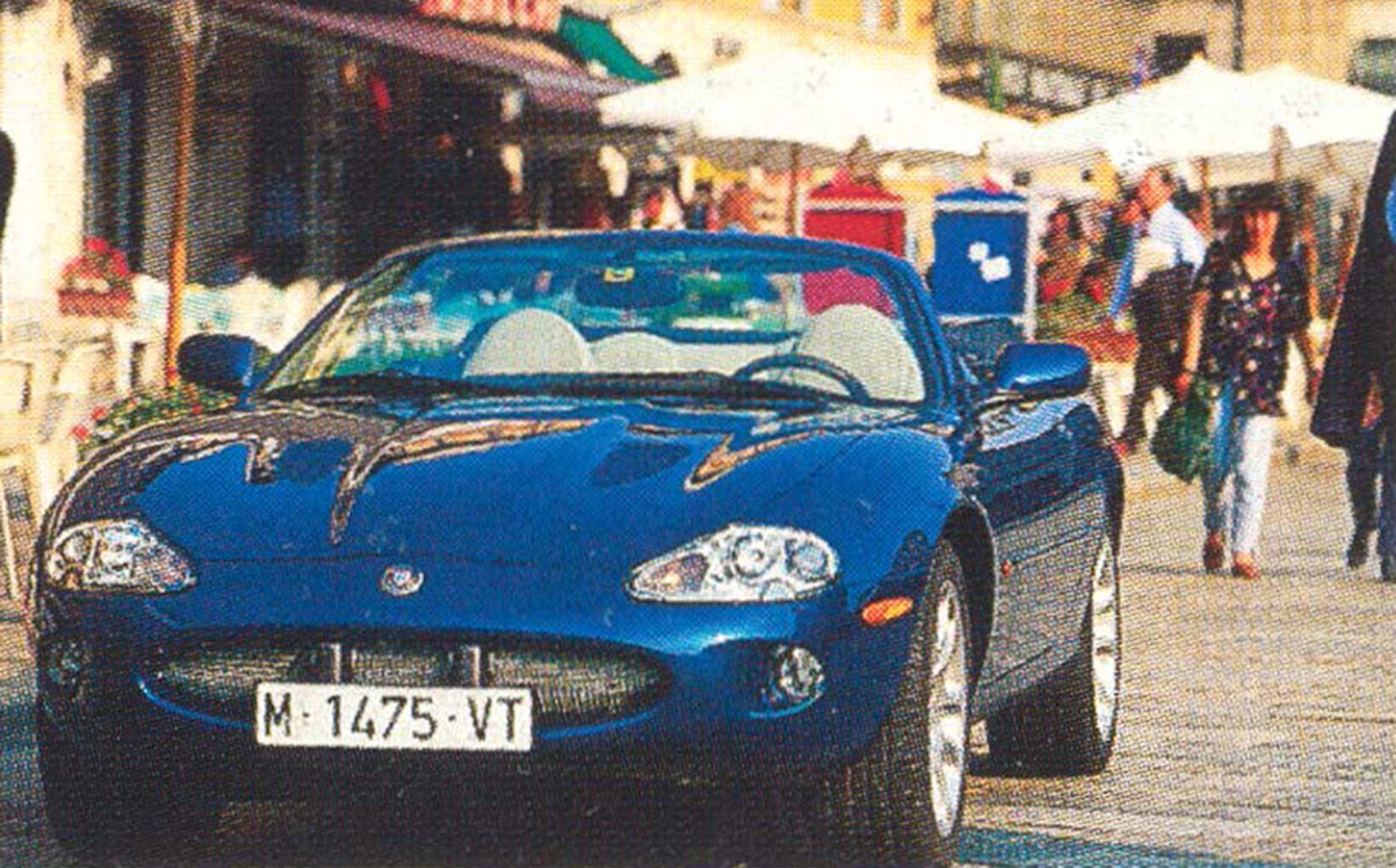 Alloy wheels, bonnet vents and rear spoiler apart, the visual differences between XK8 and XKR are few. The mesh grille is a neat touch - it's simply clipped in place over the regular XK8 in-grille bumper system - but only Jaguar aficionados will spot the red background on the cat-badges front and rear and on the wheel centres. Oh, and there's and XKR badge under the tight hand rear tail-light.

Inside, Jaguar offers the choice of regular golden-brown walnut (Classic) or dark stained (Sport) wood. Call us old fashioned, but we'll take the warm walnut over the sombre Sport trim every time. Even after five days' grand touring through five countries - from near Dijon in France to Interlaken in Switzerland, then down to Portofino in Italy and back up to near Innsbruck in Austria before finishing in Frankfort - the XKR's cabin felt more comfortable and relaxed than John Howard at Lord's. The seats provoked few complaints from the body, while the powerful Harmon-Kardon sound system soothed the soul. The only real quibbles were the poorly lit, hard to read instruments and the flop-down handbrake which we frequently forgot to release before driving off. 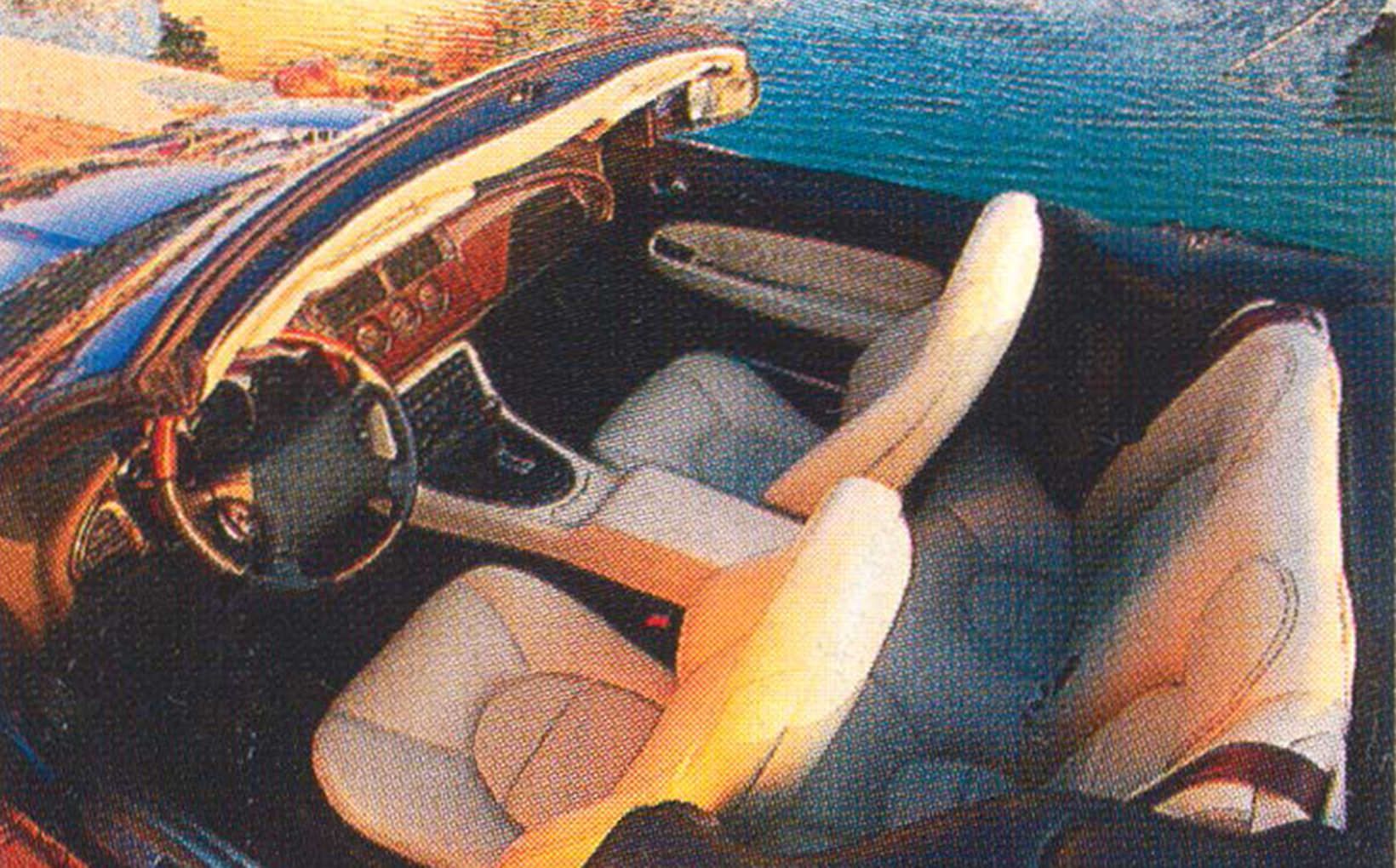 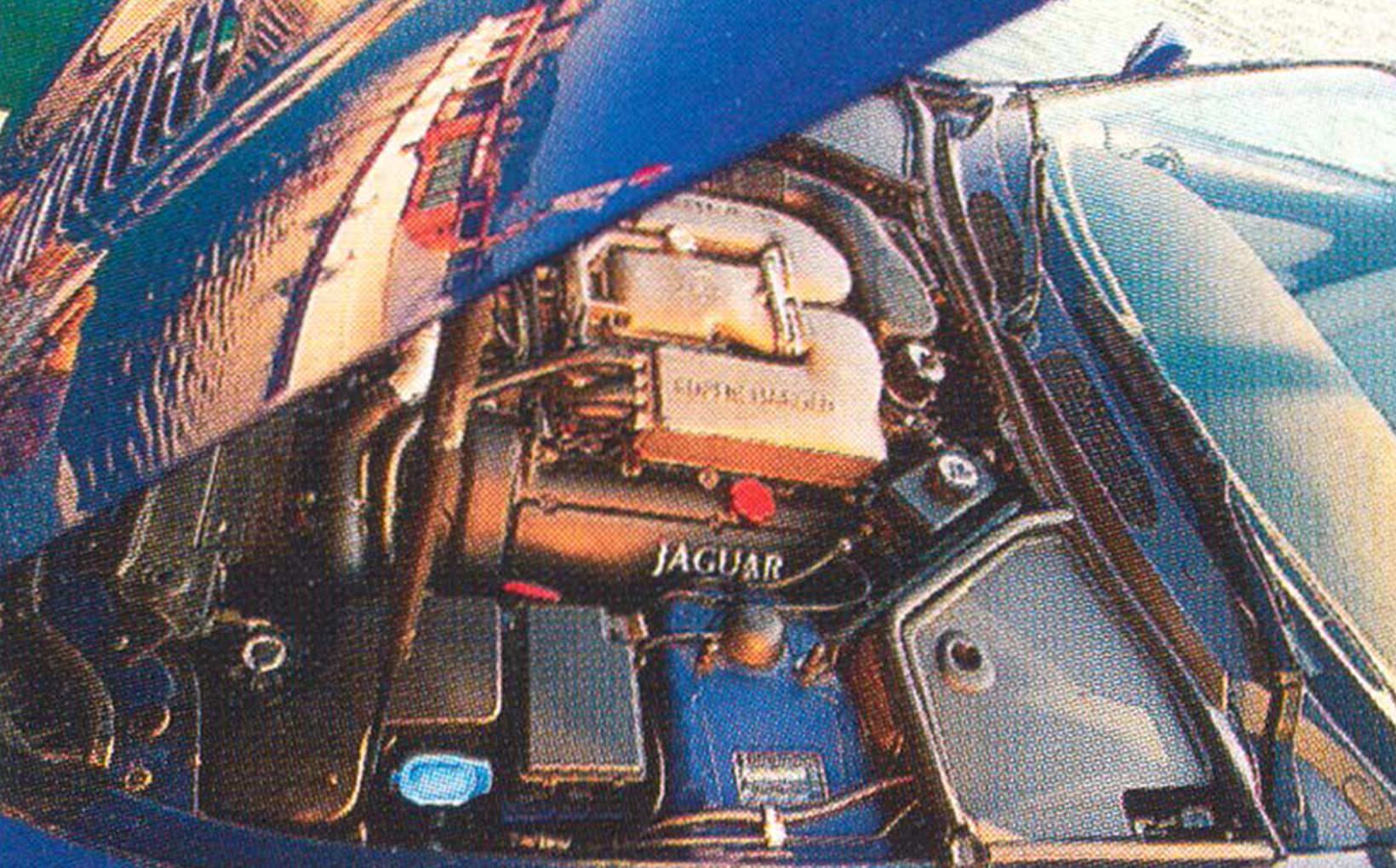 XKR coupe or convertible? This is the hard part. There’s something wonderfully sybaritic about a supercharged Jaguar convertible. True, it's softer and slower, but the reality is few owners will ever discover the difference. It's a laid­back cruise car with real bite under the bonnet and entertaining handling when the mood takes you.

The fastest volume production Jaguar ever, the coupe's unquestionably the better driver's car - with springs ten percent stiffer than those of the convertible it's noticably more precise through the comers. It's also the better long distance car by virtue of its much lower wind noise (indeed, the XKR is even quieter at speed than the XJ8 sedan, with none of the latter's annoying turbulence along the side windows). And - this may sound trite in the context of cars costing the best part of a three bedroomed house - at $203,000, it's $28,000 cheaper.

Protect your Jaguar. Call Shannons Insurance on 13 46 46 to get a quote today.