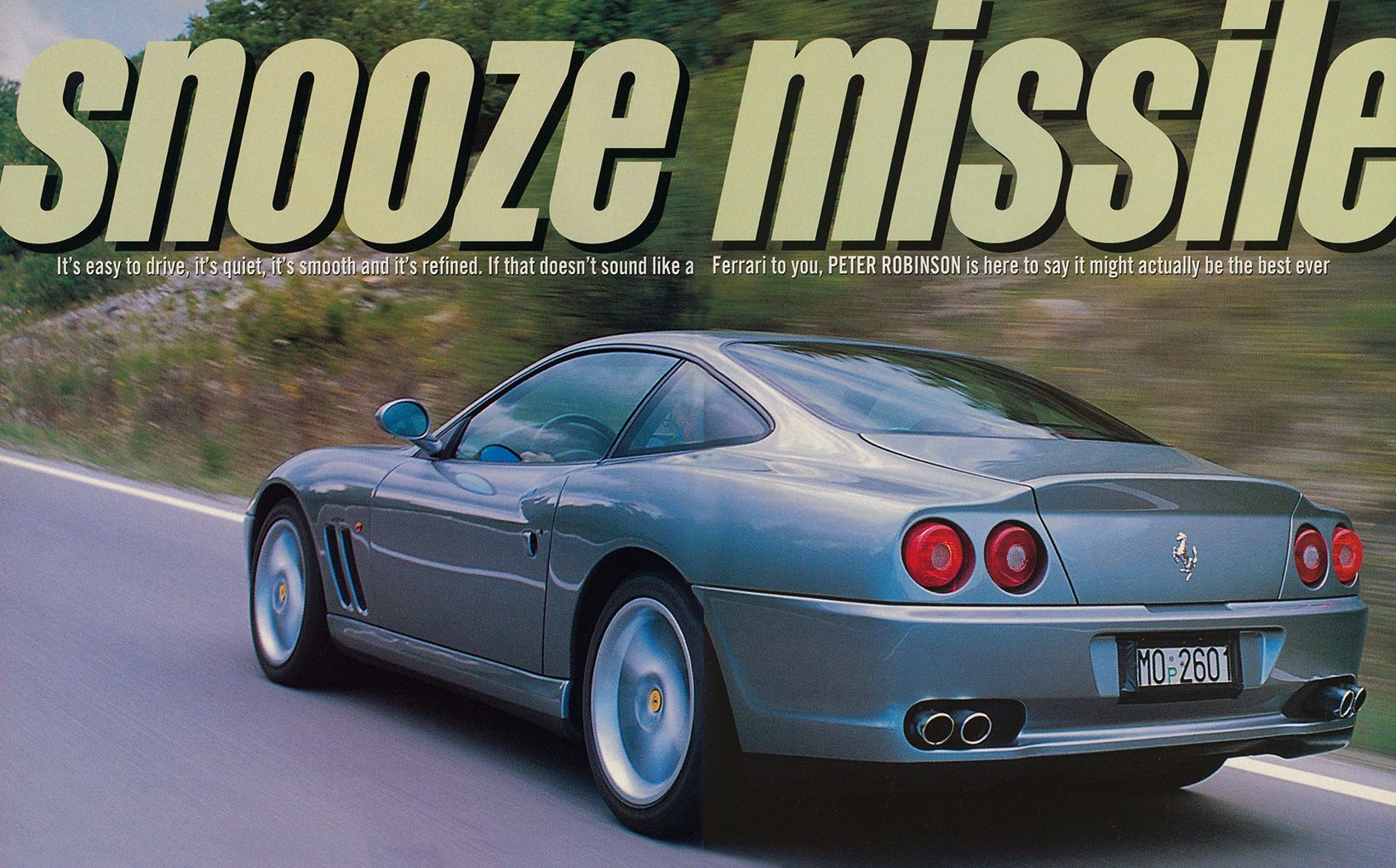 I swear nobody reading Wheels is going to be intimidated driving Ferrari's new 550 Maranello. That's driving lesson number one. Despite truly spectacular performance, it is absurdly easy to drive, demanding no special technique, no intricate knowledge of gearchange or clutch, nor bulging biceps to haul ponderously heavy steering. The fact is, modern Ferraris are not like that anymore.

The recognition of this fundamental shift in priorities for Ferrari's latest, and (never forget) front-engined, supercar, begins immediately you release the clutch. No before, from the moment you open the door and realise the 550's high enough to allow you to comfortably slide into the deeply dished bucket seat.

Then you discover the driving position is close to flawless. No offset pedals, no unreadable gauges, a gorgeous to-look-at-and-hold airbag steering wheel that moves in and out, up and down and terrific visibility, including to the rear. It's impossible to see the aerodynamic lip (Ferrari calls it a nolder, a term we've not heard before) at the extreme of the tail, and very tall drivers may find the top of the windscreen a little low. The cabin, wonderfully roomy for two people, still feels intimate. Understandably smaller that the 2+2 456GT, it is superbly trimmed in leather and high-quality carpet and yet is surprisingly uncomplicated.

Through the windscreen and across the delicately flowing curves of the central bonnet bulge, the main straight of Fiorano, Ferrari's F1 test track, beckons. Away from the congestion of Italian traffic, Fiorano is the perfect location for a driving initiation into any new Ferrari. 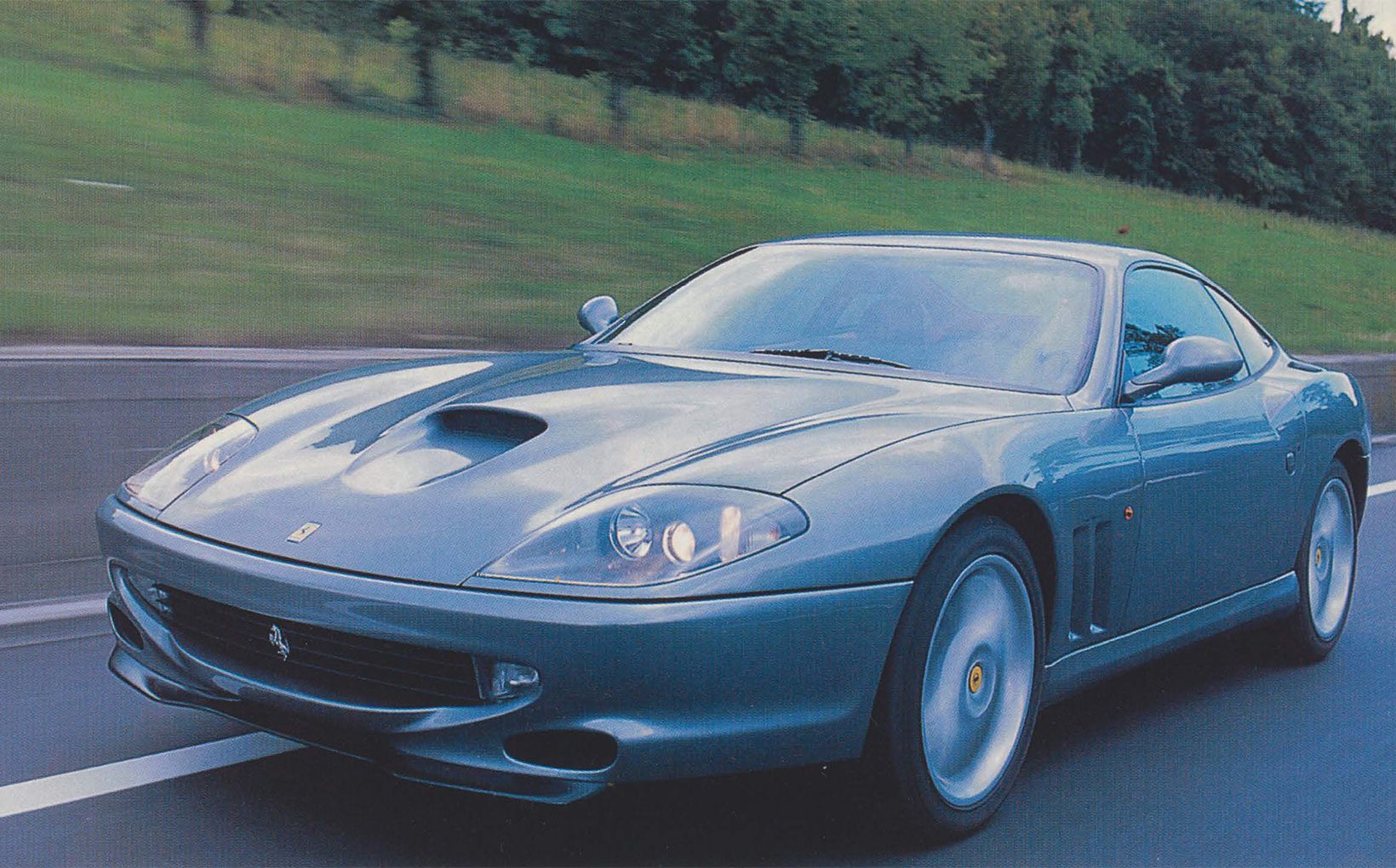 Ferrari starter motors always whirr with a special intensity and here at least the V12 doesn't break with tradition. But from the moment the engine fires it's clear the 550 is utterly different from the F512M and its TR brothers, the models the Maranello replaces.

The V12 is there, producing far more of a satiny, metallic, BMW-like hum than the vibrant bellow of a flat-12 F512M engine. Refinement, it's clear, was a high priority for the engineers. That, and meeting Europe's ever-tightening noise and exhaust pollution requirements.

Tickle the accelerator and the tacho needle sprints around the dial, yet by previous Ferrari standards (yes, even the closely related 456), the sound inside the cabin is subdued, a distant mechanical rumble that hints, rather than shrieks, of potency. Drop the clutch, slip the short gear lever, topped by its exquisite steel ball (some things Ferrari will never change) into first through the traditional open gate and two things stand out. The hydraulic clutch is light, soft enough for commuter motoring, with a progressive take up, and the gearchange slick, effortless.

Respect for the potential of a 357kW, 5.4 litre V12 means starting gently, even here. With the crankshaft spinning quietly at 1500rpm, the 550 slips smoothly away from rest. First to second at 3500rpm is almost too easy - the V12 behaves perfectly. Into third - if you're quick be careful, for the spring loading to the 3-4 plane is not strong enough – and it's sprinting. Fourth only proves the driver's spoilt for ratios. How light is the steering? Too light, too numb at first impression, despite the speed-sensitive Servotronic rack delivering just 2.1 turns lock-to-lock and quickening off centre.

The ride, supple and absorbent, is yet more clear evidence of Ferrari's intention to greatly broaden the natural driving spectrum of its contemporary supercar.

The 550 could amble around Sydney all day demanding no more of its driver beyond tweaking the air-con and selecting one of six stacked CDs. 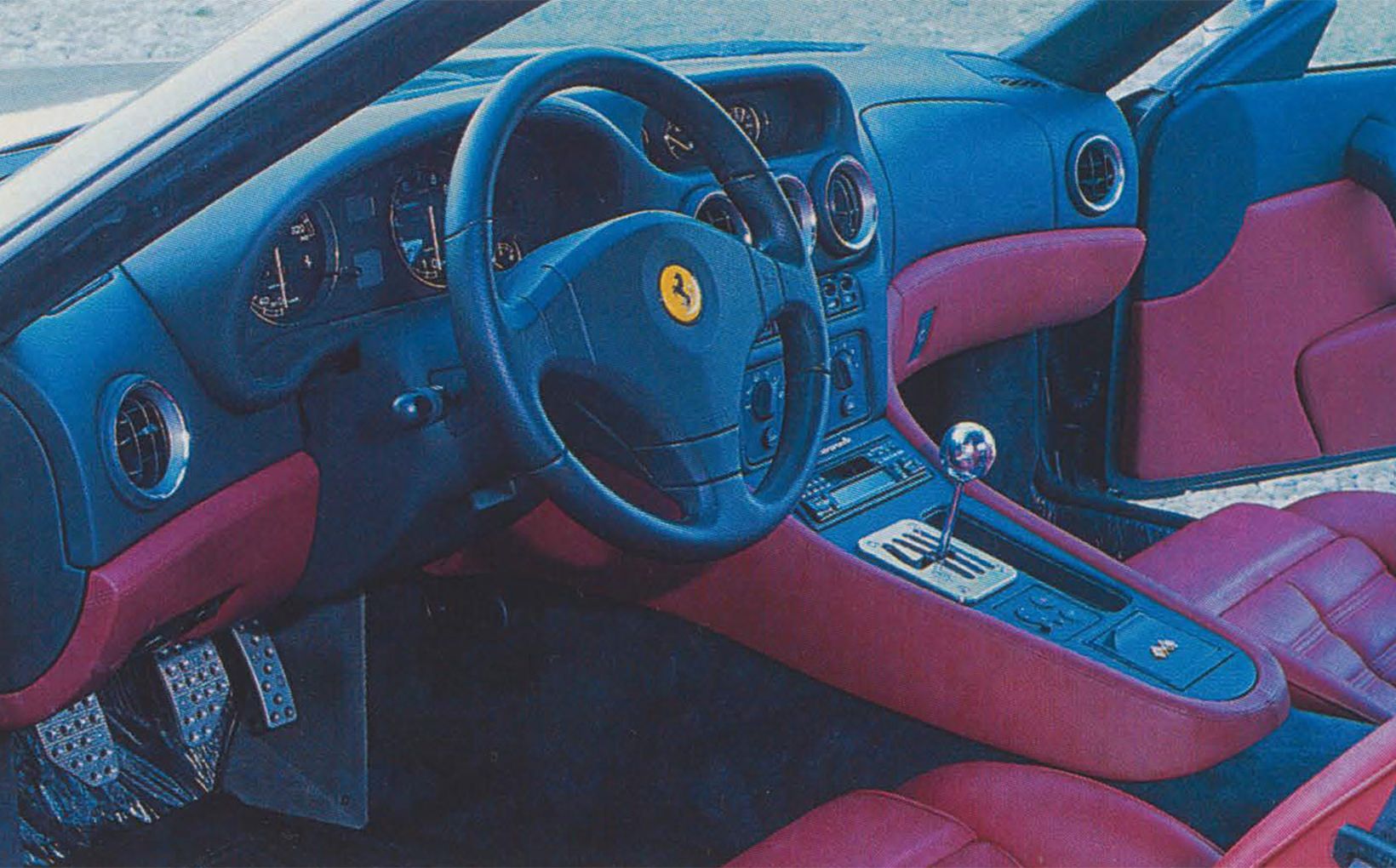 But it's time to exploit the track and to confirm, immediately, that Ferrari's latest is never hard work.

The fluency of its engine, suspension and steering prevents the 550 from feeling heavy or ponderous. Like so many great cars, the perception is that it grows ever smaller and lighter than the reality of its 1590kg weight, 1935mm width and 4550mm length suggest.

Despite its remarkably elastic character, the engine is happiest in the upper reaches of its enormous rev range. The 550's 65deg V12 shares only the same basic dimensions as the engine in the 456. Via a variable intake manifold and improved combustion efficiency, it develops another 36kW (750rpm higher at 7000rpm) and 19Nm more torque (500rpm higher at 5000rpm). Like the F50, it also has a computer-controlled variable back-pressure exhaust system.

At first, because the engine's manners are so refined and its induction and exhaust so muted, acceleration seems linear - just one mighty shove from as low as 1500rpm to the 7500rpm cutout. More experience reveals that the power band begins at 3000rpm and the engine comes on song from 4000rpm. So civilised is the performance that the 550 never feels as quick as Ferrari's claimed 4.4sec 0-100km/h.

I'm not disputing the figure, only that, unlike the wailing (and 0.5 seconds slower) F512M, the Maranello doesn't announce its speed aurally.

That is more often left to the standard ASR traction control system that shuts down engine power delivery frustratingly quickly, even in third and fourth gears. But Ferrari hasn't gone completely soft. The 550's brochure suggests the ASR offers two levels of traction control. In fact, it's three. 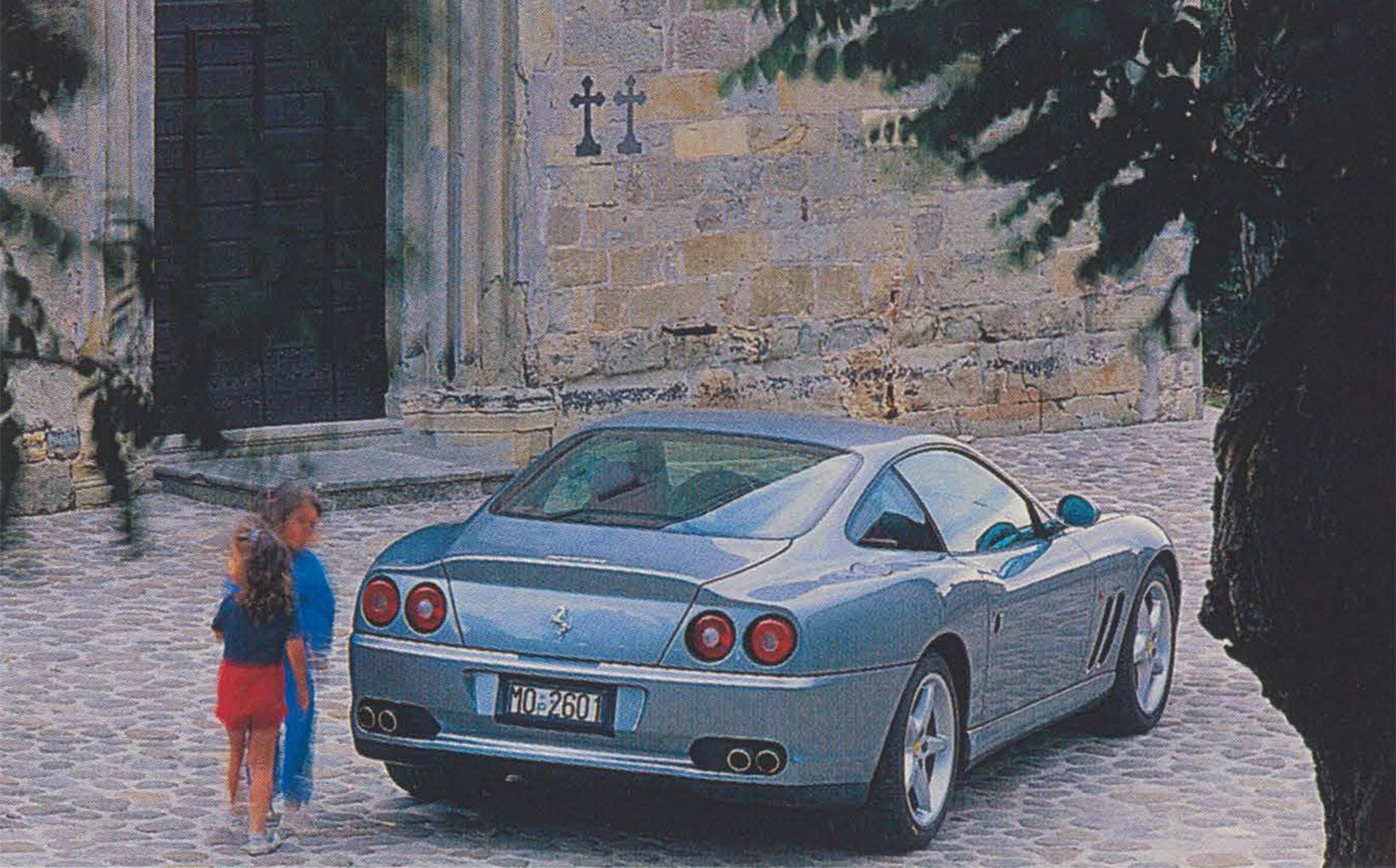 The first position, assumed whenever the 550 is started, is the so-called safety setting. This reduces engine torque and then brakes the rear wheels to further reduce wheelspin. Engage the ASR toggle switch - one of seven in an identical row across the dashboard - and through a battery of sensors, the ASR initially brakes the rear wheels and then cuts torque delivery. This happens at a more appreciably sporting level, but it's often still intrusive.

Finally, by switching the electronic damping to the sport setting, with the ASR already reduced, any artificial traction control is effectively eliminated and the 550 comes under driver's orders.

Only in this condition is the Ferrari able to reveal its true agility and kart-like handling without a sudden power loss just as things become interesting. The truth is, despite the brilliantly developed double wishbone and coil at each corner suspension, and massive 255/40ZR18 front and 295/35ZR18 rear rubber (from either Goodyear, Bridgestone, Pirelli or Michelin, the only component where Ferrari has more than one supplier), the 550 has power enough to be steered almost exclusively on the throttle. Or so it seems when you're playing hero at Fiorano.

Out in the real world, this Ferrari is wonderfully nimble, astonishingly quick from point to point and unfailingly effortless in every aspect of its dynamics.

Lesson two. The 550's remarkable refinement and polish disguise its incredible performance, making it a formidable and yet relaxing long ­distance weapon for two. Is it more GT than sports car? Probably,

The suspension copes so superbly that ruts, undulations and potholes can largely be ignored, even if the tyres develop a rumble over coarse surfaces. The compliance of the suspension, even on the sports setting, produces more body roll than expected, but this is only a minor irritation when you're held in the brilliantly supportive seats. 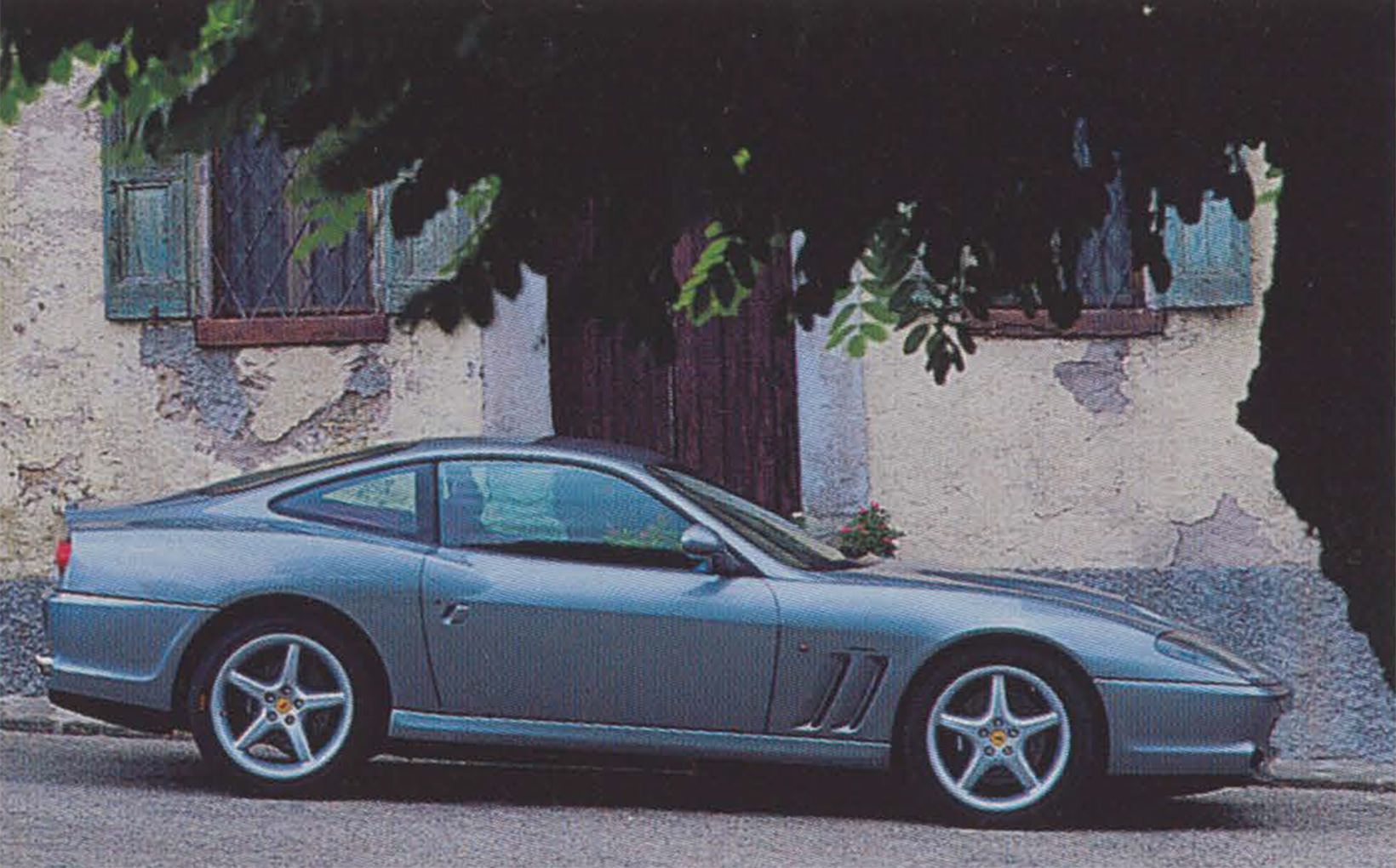 Now Ferrari has finally sorted out the rubber seals around the frameless door windows (that led to appalling wind noise problems in the first two years' 456s), the 550 is capable of cruising at 200km/h with no more than a rustle of door mirror windrush.

Mostly, though, it is the sheer level of control that inspires confidence. Anything seems possible. Twisty mountain roads are crushed under its capabilities, autobahns are mere fodder to be effortlessly consumed by an engine with power enough to take the 550 to 320km/h. And burn fuel at the rate of 35.7 L/100km in the official urban cycle.

This Ferrari can be driven with a sweeping rhythm, involving the driver as casually or as intensely as desired, almost as if senses the right way to negotiate any corner you care to put it through. On the other hand, no great skill is required to balance the 550 on the throttle, nor even to guide the car beyond the point of breakaway. This progressive behaviour, the ease with which it can be thrown sideways - ASR suitably set, of course - is all the more remarkable because the numb steering doesn't provide a constant flow of feedback.

There's never any doubting the staggering adhesion - though we didn't get a chance to try the 550 on wet roads - or high-speed stability. 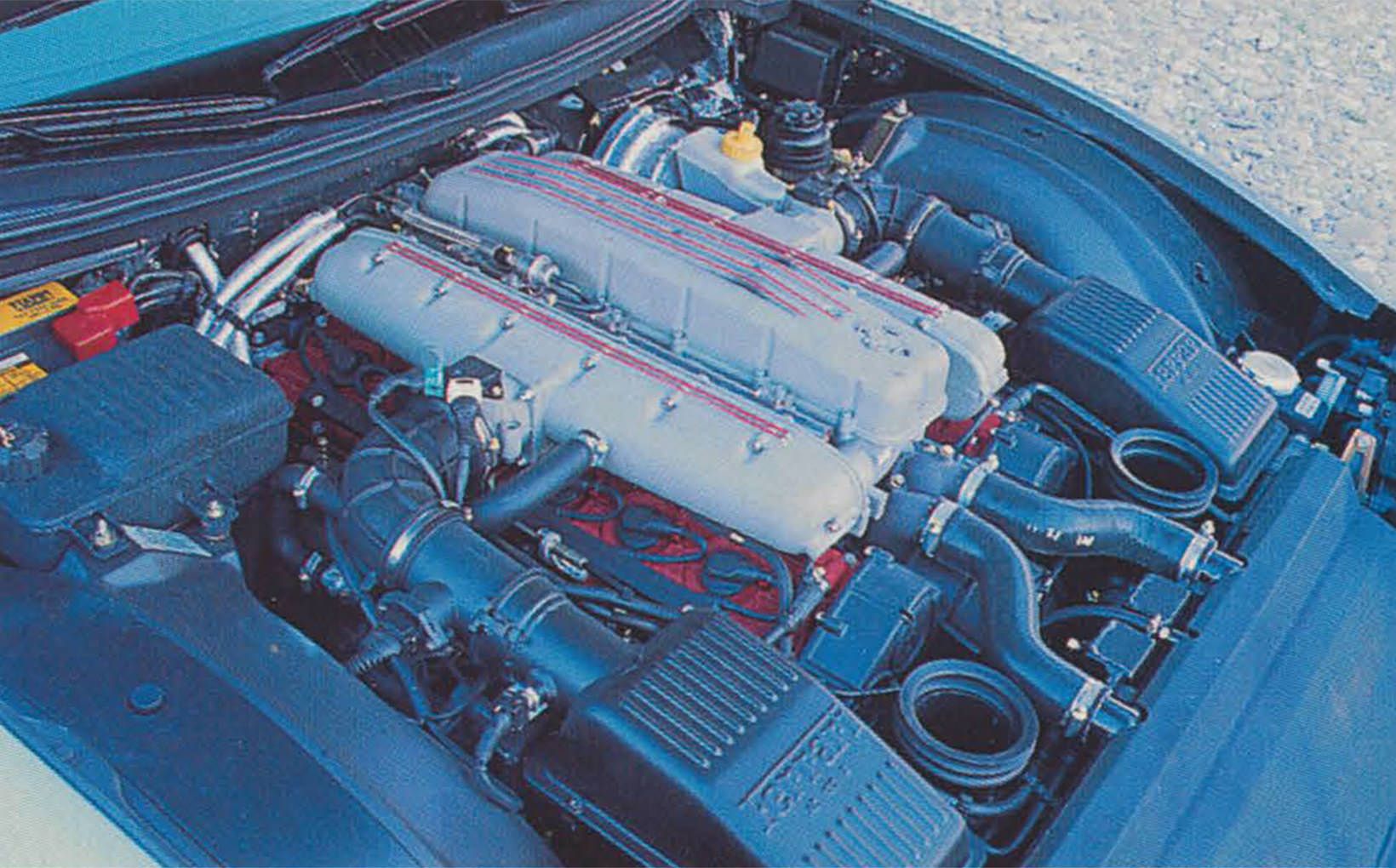 And the 550 is clearly superior to the 456. A stiffer body and shorter wheelbase help, of course, but the dampers are more sophisticated, the power to weight ratio is markedly superior (214kW /tonne versus 184) and it feels more thoroughly developed and better finished. Massive Brembo brakes, with ABS, are essential in any car so heavy and powerful. Occasionally the pedal pulsates as the sensors try to sort out the anti-lock and once or twice at Fiorano a back wheel locked on entry into a comer, but mostly they can be taken for granted. Fade is not a word in the 550's brake dictionary.

This is a car I've looked forward to driving, partly because I've already been a passenger on two occasions, but also because it's the most controversial Ferrari in years. The 550's main purpose is not storming mountain passes, though it will play that role with consummate agility, in comfort at speeds that are wholly illegal (except in Germany).

Familiarity hasn't softened my view of the styling. It's very colour-dependent (light metallics help) and while I'm happy to acknowledge a level of presence few cars can surpass and admire the delicacy of its glasshouse, and the undoubted thoroughness of its aerodynamics, it has too much contrived retro-ness to be a truly great design.

There may also be those who see it as so close to perfect as to be dull because it lacks the obvious entertainment of many past, more sporting Ferraris. There is a degree of truth here. Somehow Ferrari has to find a way to meet the sound regulations and permit a charismatic exhaust note.

What it all means is that in the 456 and 550, Ferrari has two essentially competitive GT cars. One, it's true, is a four-seater and more often that not an automatic. Maybe that's enough to distinguish between two cars of such great ability and balance.