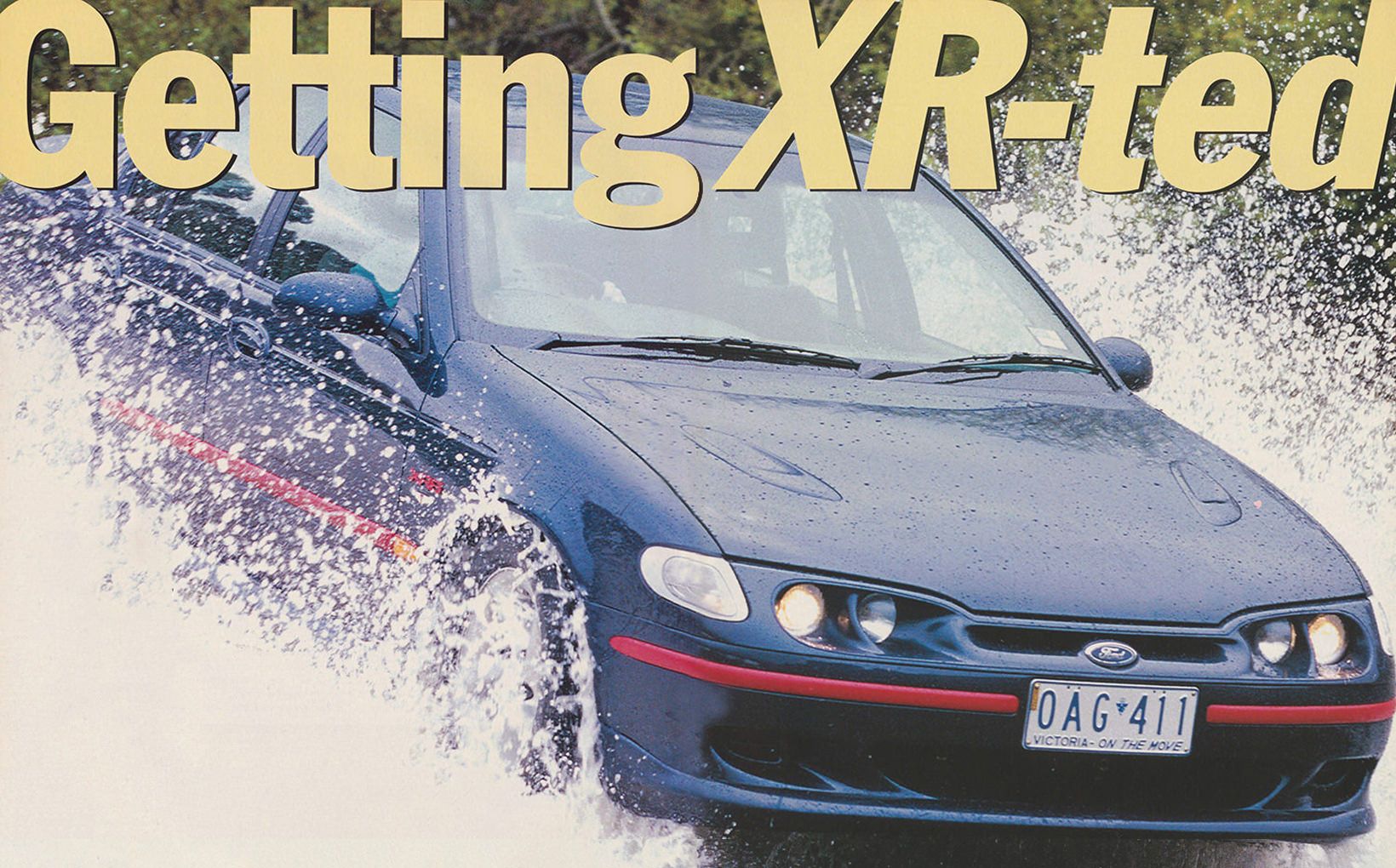 "We've already made the major advancements," says Tickford product manager Howard Marsden. "Now we're doing the sort of tuning that in the racing world can give you that extra half-second a lap advantage." In other words, it's the same XR hardware but running on a new, improved set-up.

While there are no major revisions to what we now know of XR Falcons, a spread of relatively minor tweaks succeed in moving Australia's best value sports sedan into a yet more favourable light.

Only the eight-cylinder engine is changed, and then only in its exhaust system. But the improved breathing provides not only a few extra kilowatts to enjoy, but also gives the engine a magnificent V8 burble - something sorely missed in previous XR8s. The pushrod 5.0 now produces 170kW while turning out 398 of Sir Issac's metres. Tickford is making no claims of improved performance against the clock, and the seat of the tester's pants did not detect any, but it really sounds musical now. The 164kW 4.0 litre XR6 soldiers on, still coarse when revved, still torquey as hell and still a lot of fun, particularly when sitting ahead of a manual gearbox.

Tickford Vehicle Engineering MD David Flint doesn't want the XRs to get stuck in the evolutionary trap which has destroyed too many interesting cars. 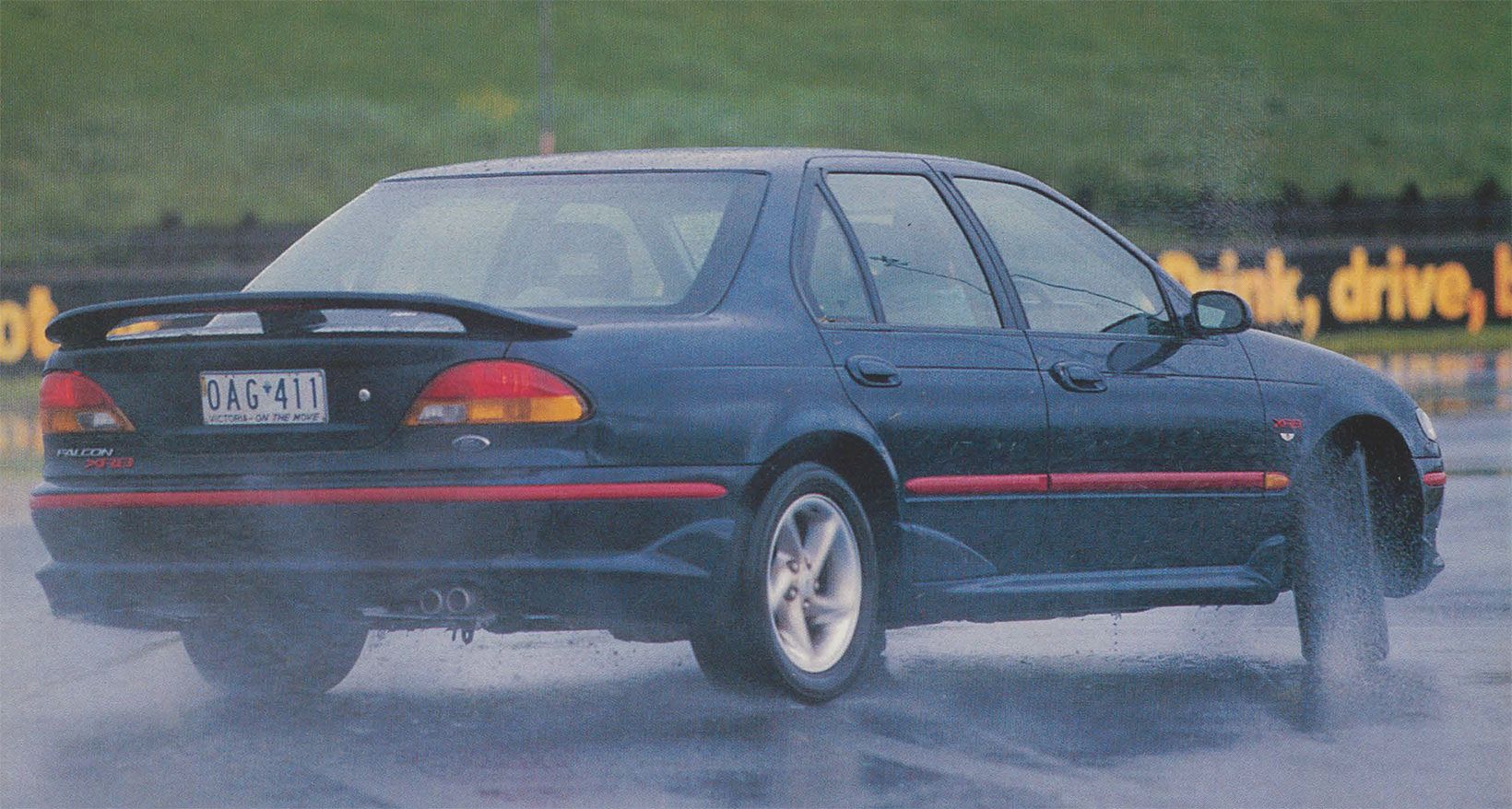 "We wanted to make sure the XRs don't creep away from their roots," he said. "We want to make sure they remain fun to drive." The middle-age spread Flint indirectly refers to is a genuine problem - the Datsun 240Z 's (d)evolution into the swansong Nissan 300ZX is a classic example of what can go wrong when you forget where you started.

One of Tickford's specific goals was to nuke the XRs drive 'sn1aller' than they are - a noble an1bition for any large sporting sedan. Up front there's been some jiggling with spring rates

(about 5 percent above that of the EFII X.Rs), adoption of a clever - and actually pretty sexy-looking, if you can find it- metal/urethane composite one-piece inner bushing for the lower control ann, in place of the three-piece bushing used in the plain-jane EL. In addition, the shock absorber has been revalved for superior compression and rebound control.

More work with giant molecules can be seen on the front tie bar, where the magical properties of urethane (okay, when compared with good ol' synthetic rubber) under compression improve suspension compliance and reduce toe-in/ out changes during acceleration and braking. 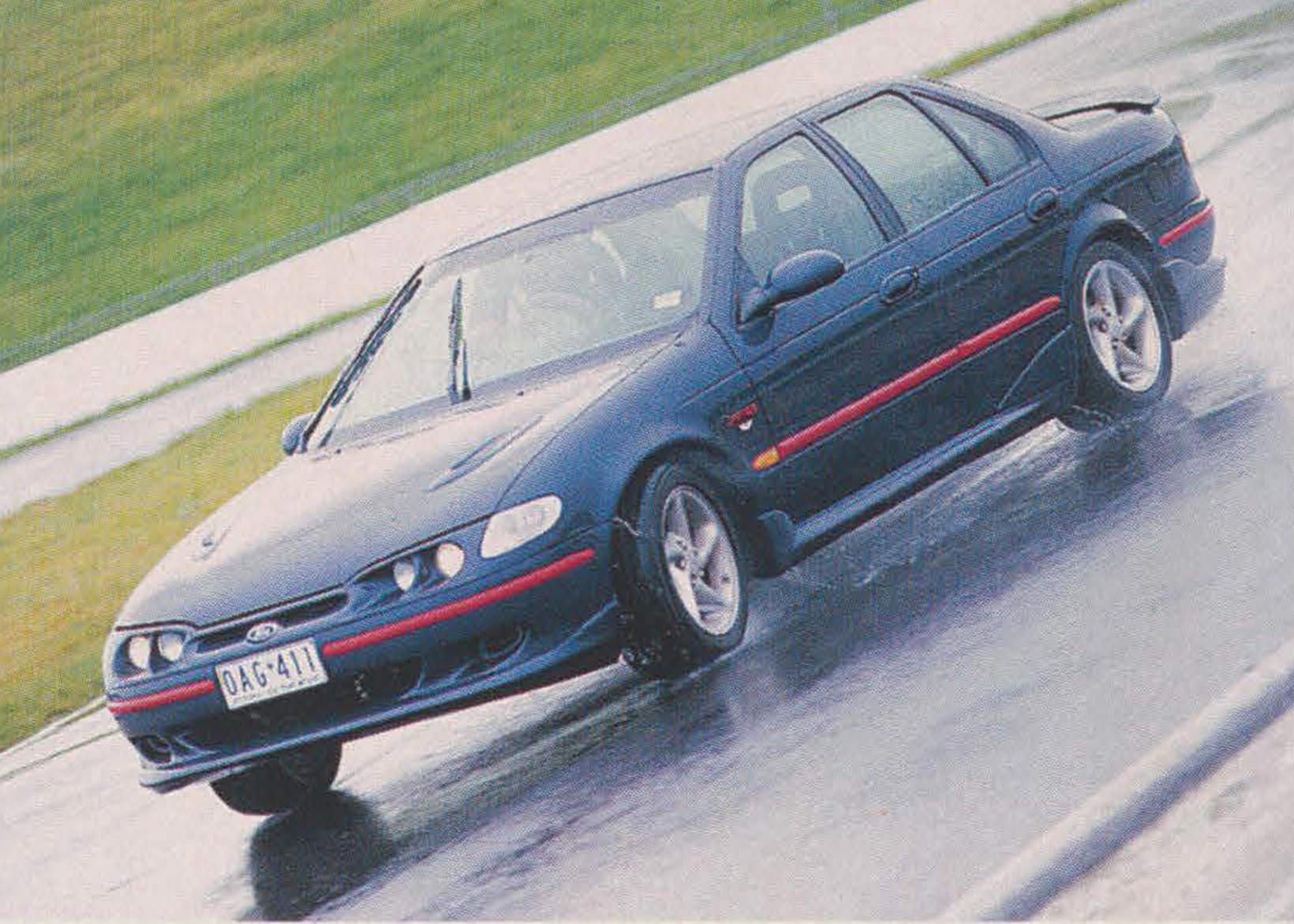 Incremental changes have also been made at the rear. The upper control link is a fabricated component - longer than the one used on the fleet specials - and a uses a unique front pivot point.

The miracle material is again used to keep the Watts link and rear stabiliser from rattling on their fasteners, in place of synthetic rubber.

As has been the case since the EF, there's still a Tickford sports suspension pack for Falcons and Fairmonts which is identical to this XR set up. See your dealer for details.

For the first time there's also a sports suspension pack for Falcon and Faim10nt wagons which incorporates all of the XR's front-end tweaks in conjunction with Tickford enhancements to the, ah, simple leaf spring geometry at the rear.

Yokohama AS10s replace the Michelins previously fitted to the two optional 16in rims. One is the current twisted five-spoke design, the other a new 'closed face' wheel which really looks like it should be the design for the base Fairlane wheel cover. The new standard 15in alloy wheel on XRs is a snazzy seven-spoker.

The degree to which Tickford has succeeded in refining the XR package is even more impressive when you take into account the tight cost and production restrictions. The desire to keep both XRs affordable meant that engineers couldn't go at the EL armed with a fat chequebook and the trusty meat axe.

The goal was to ensure the new XRs would be more entertaining on the road for folks like us without spooking the less­than-keen driver, in the meantime avoiding a billy­cart ride. Having said that, no blind rear passenger is going to mistake an XR for an LTD, thank God.

The ride is firmer than on the standard EL, but your teeth won't shake loose.

Of course the XRs get most of the tweaks which have improved the demeanour and presentation of the Falcon across the EL range, including front seatbelt height adjustment (finally!), better sound deadening in the cowl and underbody areas, and incremental upgrades in material selection and quality.

We put a few kays under the belt of a new XR6 and are happy to announce that all of the EFII's delight-inducing qualities are there, along with a couple we wish weren't. The car does indeed have a crisper tum-in and sharper steering response, though it's not flighty and nervous as the regular EFs were. And it can now show a tum of speed on dirt and gravel without swapping lanes unexpectedly.

TVE have indeed succeeded in making the XR6 feel 'smaller'. It now feels much like a well-sorted rear­drive Telstar - if you can imagine such a thing - than a big, true blue Aussie. 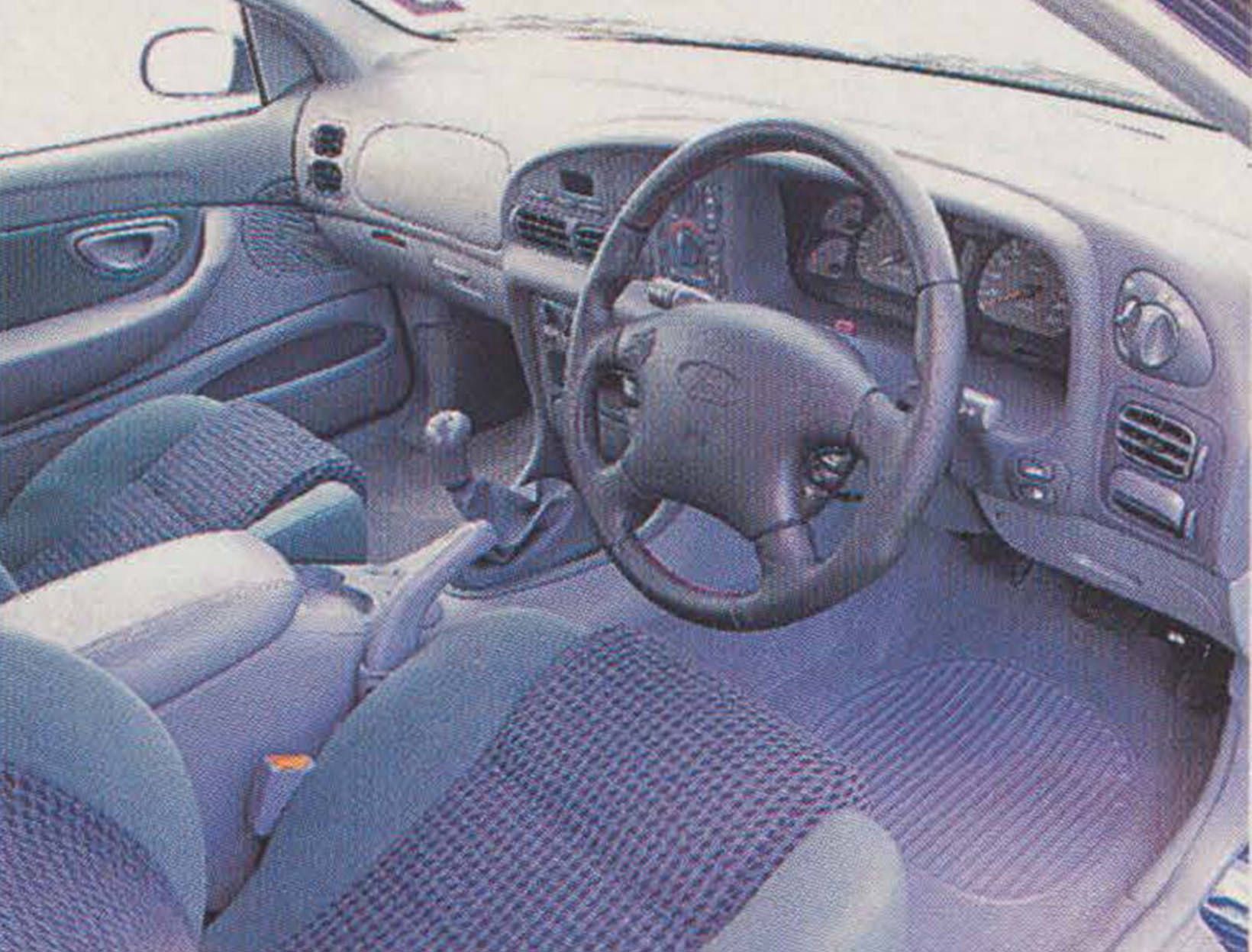 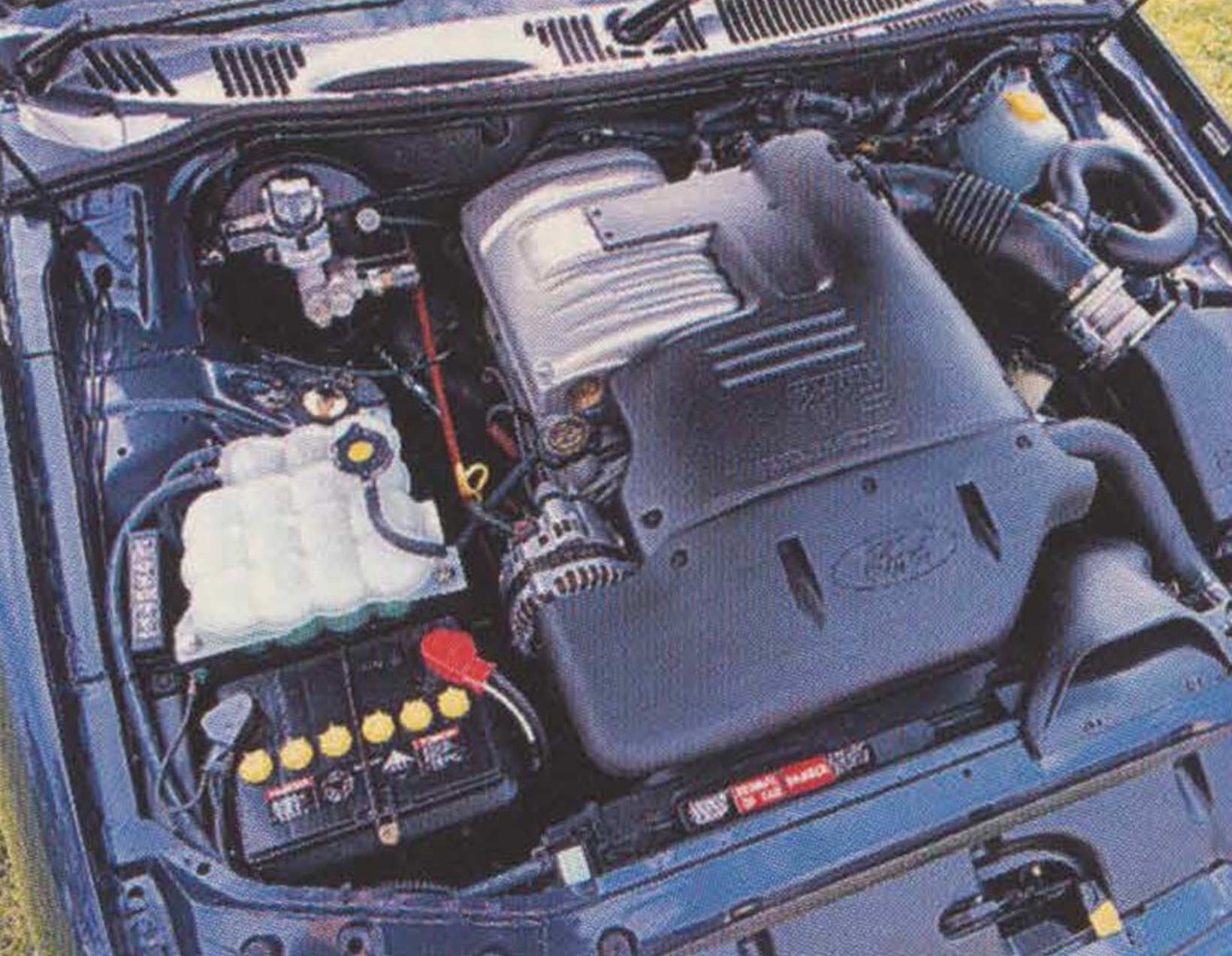 There have also been some cosmetic fiddles, not all of which will be to everybody's taste. The shark-like snout of the EF has been 'freshened' (we really can't bring ourselves to say 'improved'). The front end now features a small ovoid intake between the headlamps and scalloping around the headlamps themselves, plus revised bonnet air outlets and a larger, more aggressive rear wing as part of the body styling kit that's exclusive to the XRs.

The XR6 wagon, sadly, is no more. We liked this car a lot but it appears that Ford's n1arketing types just couldn't get their arms round it, so it's unceremoniously been dropped from the range.

The really sad part is that the new sports suspension pack with availability of the 16in wheel and tyre combination would have made the wagon one helluva car. May it rest in peace - it will be missed.

However, it wouldn't be a funeral without a wake, so here's a little nip to help you remember the departed with fond affection: Ford's marketing people must be feeling so guilty about the death of the XR6 wagon they decided not to raise the prices of the surviving XR6 and XR8 model a penny; XR6s start at $38,442 and the XR8 bases at a paltry $40,603.

And despite the aural excitement of the re-piped bent eight, we still favour the unique proposition the XR6 offers. Queue here.

Protect your Falcon. Call Shannons Insurance on 13 46 46 to get a quote today.