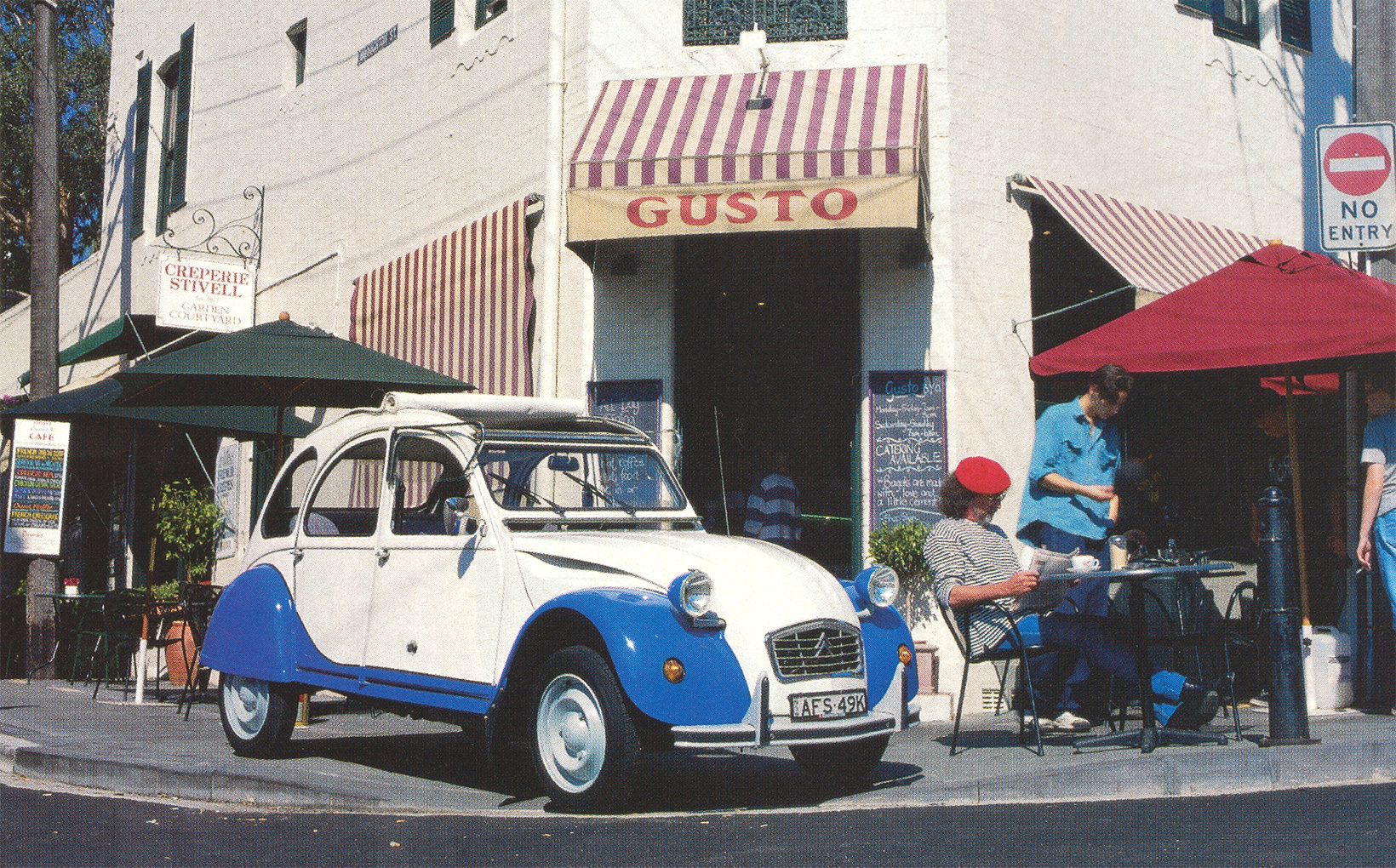 No-one is as foreign as the French - and no product bears witness to this more surely than their Citroën 2CV.

In an age when cars were styled for the afiluent, imagine the eccentricity of designing one from the inside out, specifying its payload in potatoes and wine, tuning its suspension to the fragility of a basket of eggs and defining its form purely by farmyard function. But when, in 1936, Pierre-Jules Boulanger committed Citroen to the creation of a vehicle specifically for the bone-poor paysans of France, his brief included just such parameters. An architect by training and much impressed by minimalism, Boulanger assembled a team of intellectuals, artists, craftsmen, scientists, technicians and an astronomer - many without motor industry experience - and gave them free reign to redefine the car in its most basic form. As a working tool. No 'truth' was to be unquestioned, no history held sacred and no idea was too bizarre to be considered. 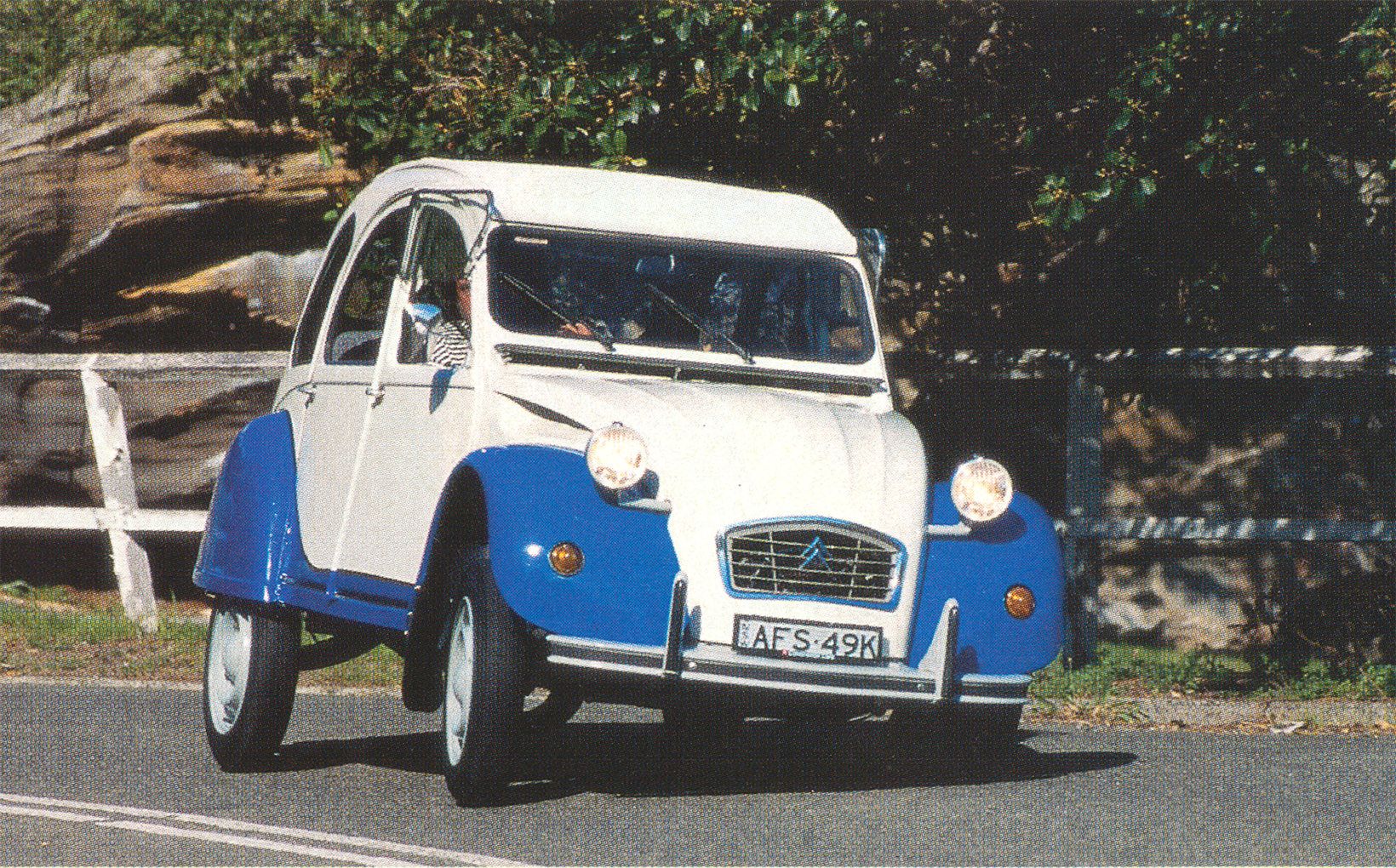 And so, in the romance of Left Bank Paris, was conceived the most pragmatic passenger car ever contemplated. And, perversely, the most whimsical. Its single headlight ornamented a mica-windowed body of corrugated alloy and waxed canvas that shrouded 375cc of water-cooled fury. It was as rough as rope, cheap as chips and ugly as buggery. Only the outbreak of World War II prevented release of the original idea although, politely, the events are usually described as unconnected.

It was not until 1948, a year regarded in the Editorial Palace as seminal in motoring history, that the revised 2CV was announced; honed in war-time secrecy by Citroen to serve in fields tragically fertilised by the best and bravest of two generations. 'Honed', however, is a relative term... 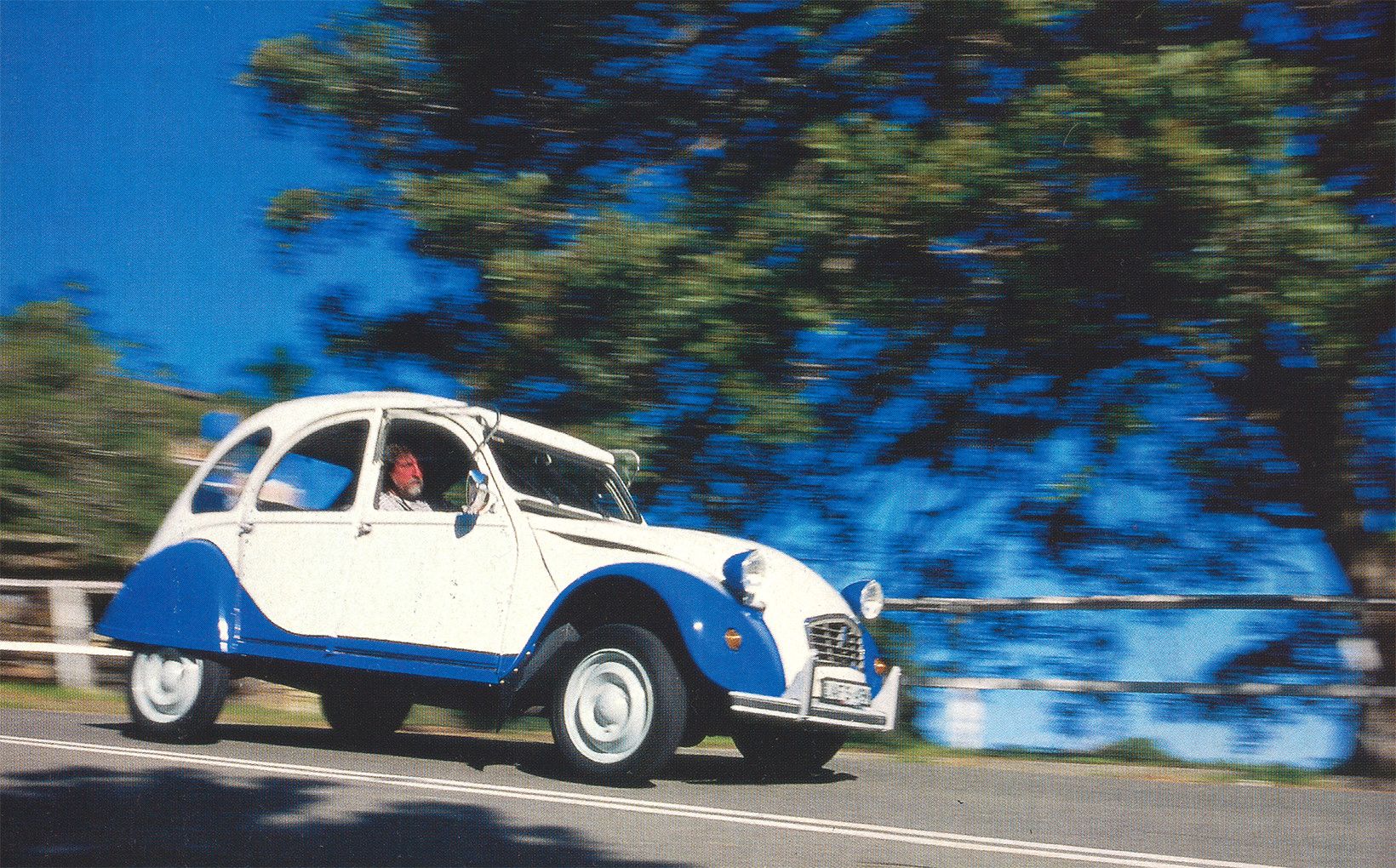 The production version was still as close to The Anticar as anything ever built. The non-structural body, now in steel just one grade up from foil, had no function beyond keeping the rain out and no beauty whatsoever. The 375cc motor - now air-cooled - made maybe 6kW and only got a self-starter at the last minute because Boulanger's secretary tried the planned rope-pull version and called him something nasty. The wipers were driven from the speedo cable, the seats were hammocks, the roof was a rag and the last time mankind had witnessed panel fit like it was when they rolled rocks in front-of tombs. Oh, sure, it had its practical benefits - you could clip the doors off, rip the seat out, roll the roof back and take a sick cow out for a healing drive. But, by any nomal measure, it was a car that only the Genuinely Foreign could love and accordingly the French filled the waiting list unto infinity - 42 years' worth of infinity as it happened, during which time the rest of the World embraced the tireless little workhorse in roles never contemplated by its creators.

The car that outlived its function as a farmer's beast in the '50s rose again as a symbol of revolution in the '60s, an alternative statement in the '70s and an icon of intelligentsia in the '80s. No product ever developed for the arse of man was ever so appealing to his mind. 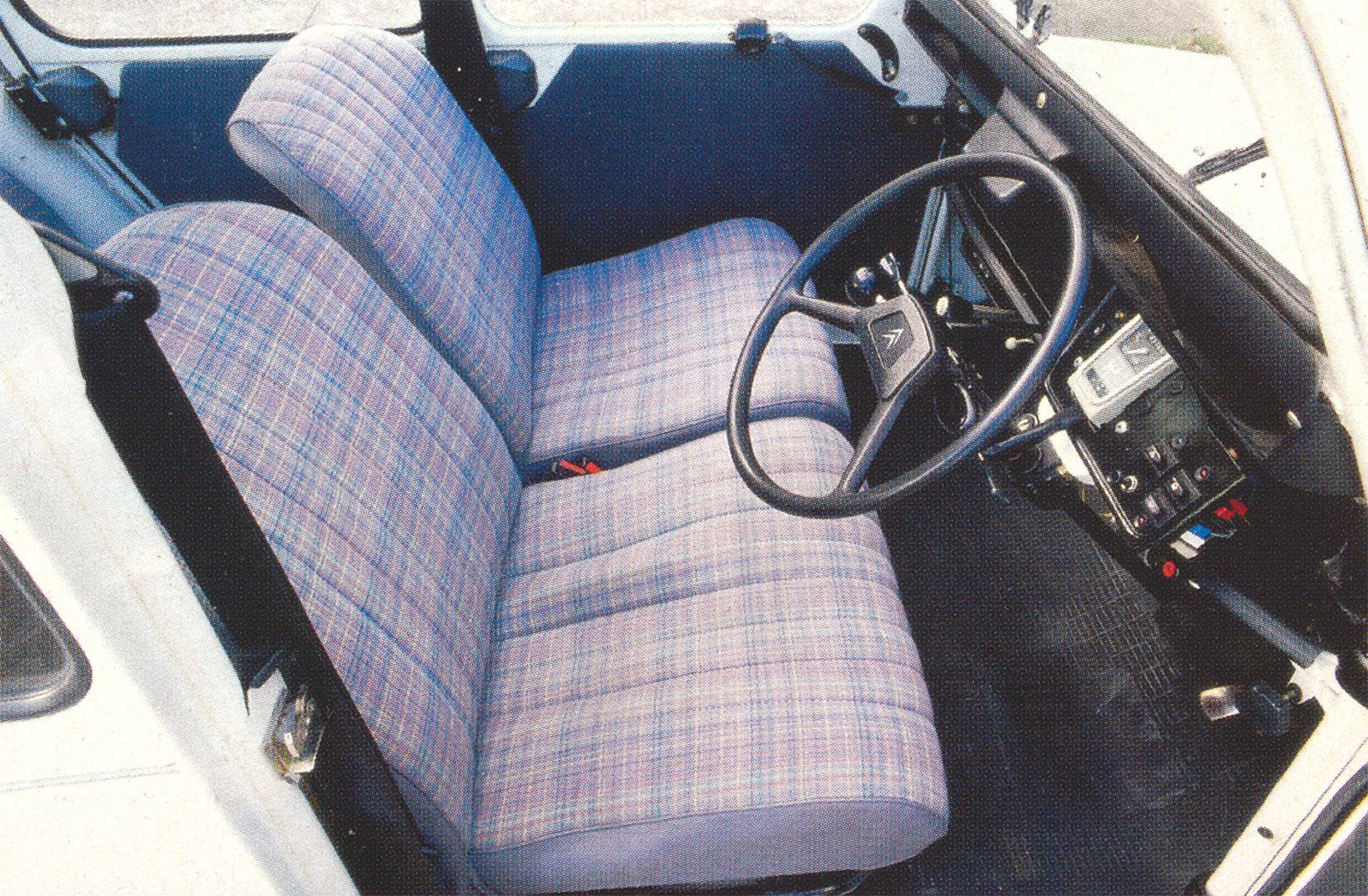 Nearly seven million units were made in 15 countries: They made them as wagons and vans and in every variation, from twin-engined desert-bashers to fancy­painted follies. They developed the little brutes slowly but surely - ignition keys, fuel gauge and colour choice took years and Man was on the Moon before it got shock absorbers. But they really changed nothing at all. By 1990, when the last of Boulanger's babies wobbled off the production line, it was still wonderfully, magnificently, totally Foreign.

And it remains so today. Some of its advances have now become universal. Citroen pioneered mass­production front-wheel drive and all­independent suspension. But the 2CV's most impressive ideals have been sadly lost. Versatility being seen as compromise, vehicles are now fixed in form and function. Innovation having been sacrificed for habit; the standardisation of controls is now almost universal. But the greatest loss has been lightness. The ease, economy and agility that flow from this virtue are now long gone from motor manufacture, their loss disguised by power-assists and tolerable only because petrol costs less than lollywater, 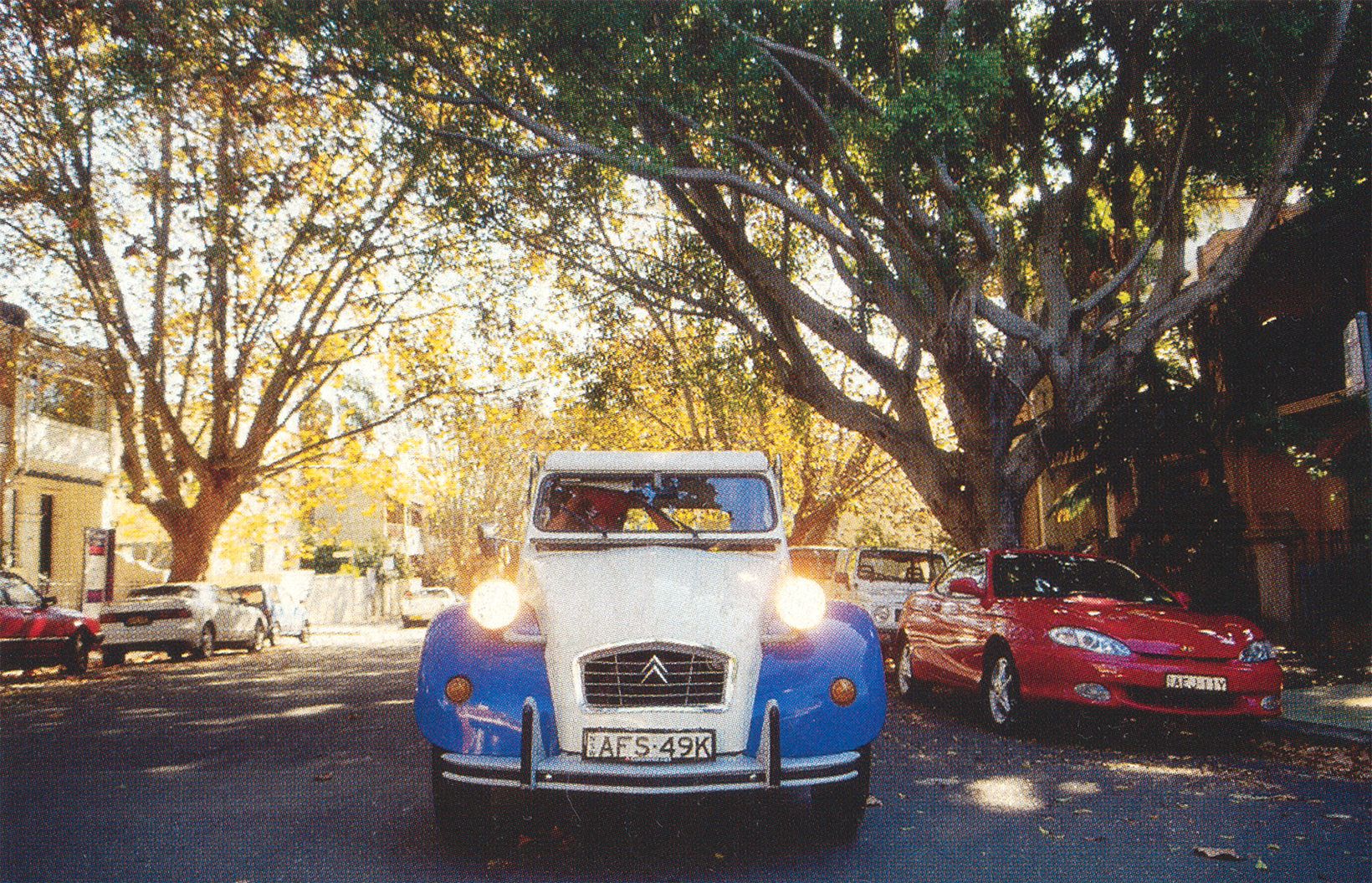 To give some idea of Citroen's accomplishment with the 2CV, we need to consider the most intellectually­minimalised vehicle in current production, Lotus' Elise. Engineered of alloy and plastic formed by advanced techniques to explore the outer limits of delicacy, it is a pure two­seater with few comforts and, despite its many virtues, no-one expects much of it in the way of stamina. With its tiny roof on, it weighs in at about 700kg. The 2CV, by contrast, was a spacious, well-equipped, inordinately comfortable, steel-bodied, four-door, four-seater of prodigious durability. It weighed 585kg.

But no amount of abstraction gives any idea of what the thing is like to actually drive. Greg Bunting of Continental Cat??, Punchbowl, NSW, is doing his best to explain the totally unfamiliar controls but keeps tumbling over his own m.ad enthusiasm for the bolide and laughing along with me as, in explaining each feature, he seems to rediscover the wonder of it all afresh. 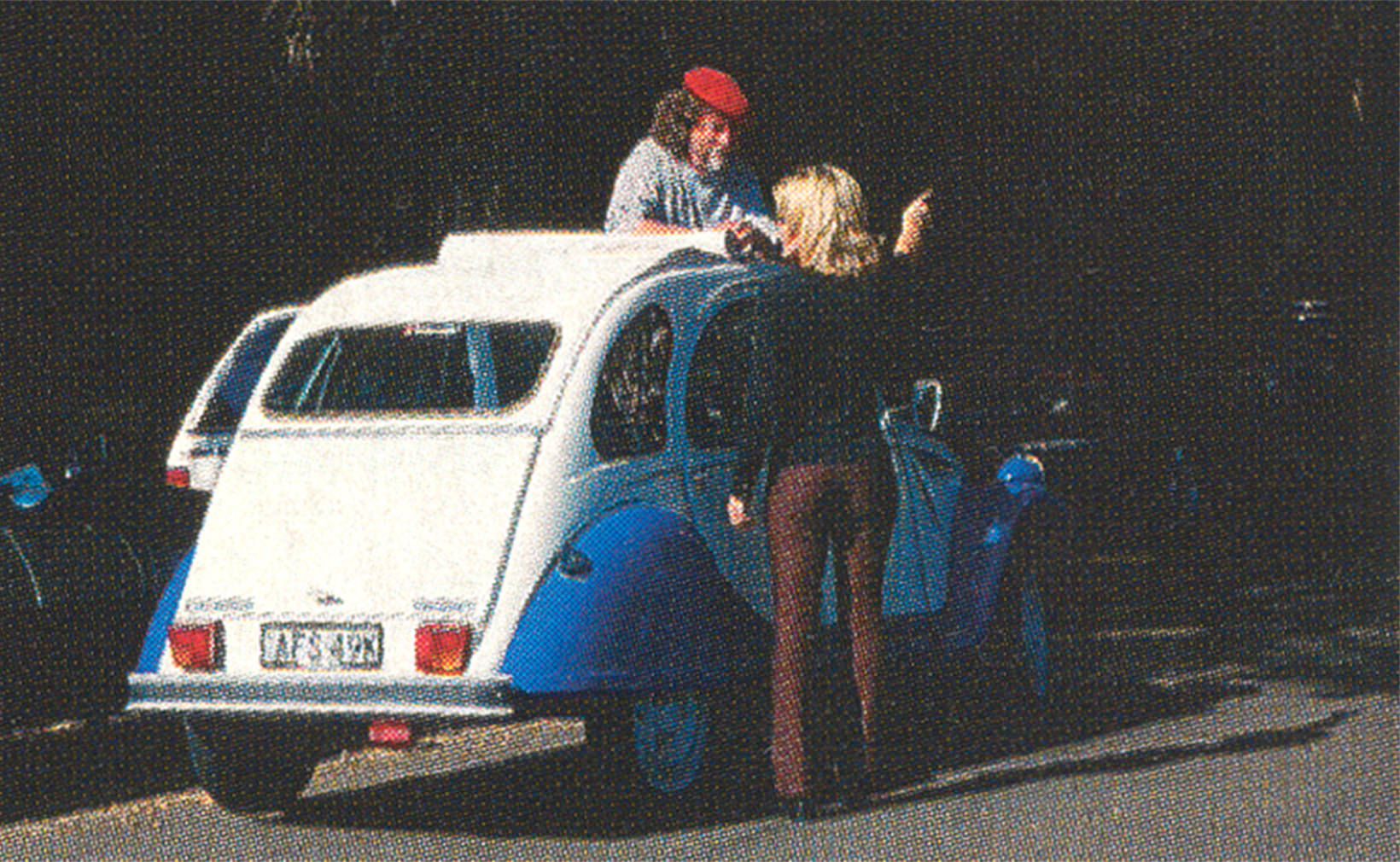 What we have here, I eventually gather, is a 1986 2CV6 Special model which is Greatly Civilised in having comfy chairs, heating, an English-speaking radio and the monster 602cc 21.62kW boiler up front for your added motoring pleasure. It also has buttons and knobs that Do Weird Things like adjusting the headlights, opening the scuttle for air­conditioning and illuminating the brake fluid level. What it lacks is just as telling - there are no gauges other than two watch-face analogues that tell you how fast you're going and how much longer you might expect to remain mobile. What more do you need? There's no handbrake warning light either - because the car will either move or it won't. Simple. The engine is similarly distinguished by its omissions, having no hoses, water-pump, coolant, fan belt, distributor, big-end bolts or even gaskets. It looks like it might involve hamsters and wheels - in striking contrast to the sculpted muscle of Jaguar's XK motor released the same year - but gives stone-axe reliability nonetheless.

Then there's the seating which can be infinitely configured in or out of the car for use in ways that still aren't legal in Tasmania. Somewhere in the babble comes the bit about unlocking the boot but I mss that. It's hard enough grasping instructions as to how to open the windows - but wait, there's more. 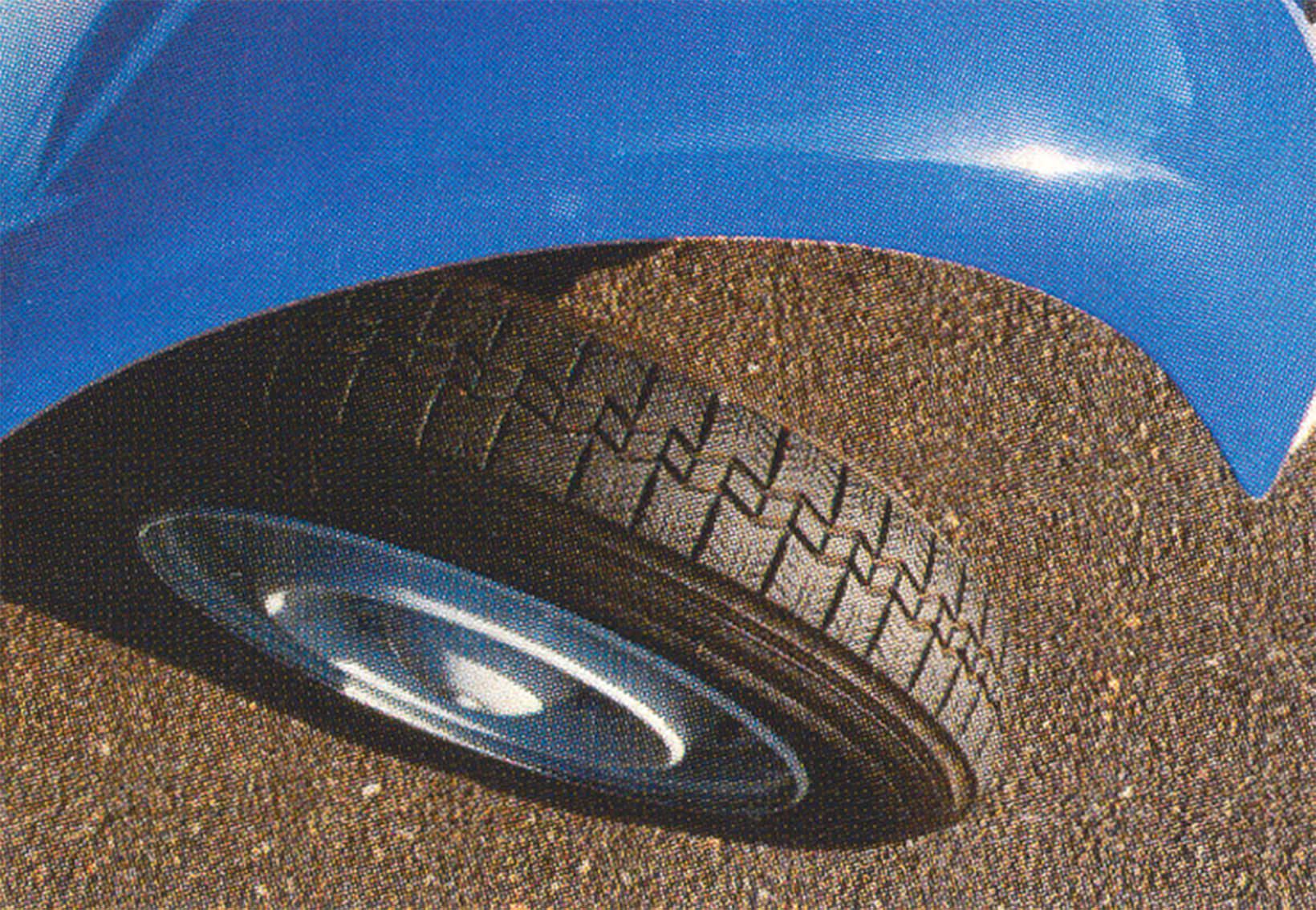 The whole shebang can be taken apart with a Swiss Army knife, the headlights ('Are you getting all this?') unclip for bulb-changing (see Eveready) and the front wings are held on with three wee bolts. One traffic tap and this is going to look like Bosnia.

Bunting then uses what's left of his straight face to explain the gear-change. Picture this: A stout rod emerges horizontally from the dash with seemingly a half-metre of purely in-and-out travel. Ratio selection relies on twisting the knob with each pull and lunge.

Correctly diagnosing my ever- widening eyes as a combination of information overload and raw fear, Bunting then summarises as follows:

[1] They've put a second gallon of fuel in so that should get me to Brisbane.

[2] For further history, consult anyone displaying a Greenpeace sticker.

[3] For technical assistance, flag down any passing cyclist. 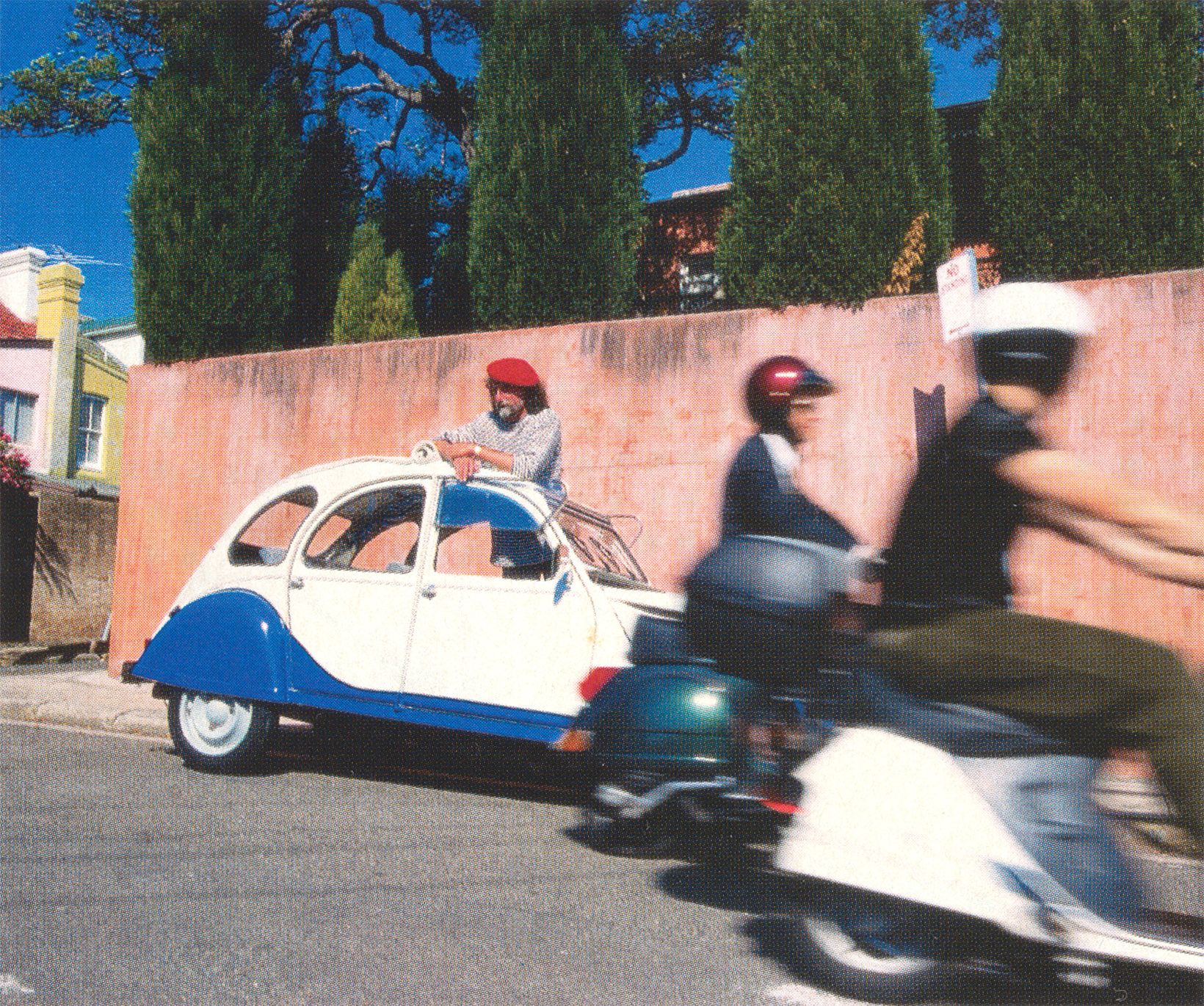 Well-braced for unorthodoxy, I am initially confused by the little car as we begin our acquaintance. The door handles are stout cast alloy instead of the expected feathery pressings, the seats absorb you as luxuriously as an evening armchair and everything seems ... reasonable.

But first turn of the key dispels any sense of familiarity. The starter whacks in with a ferocious rasp and the motor thrashes into life like two tiny fists in a bucket. Even tickling it above idle feels like mechanical abuse ... yet common wisdom says that Continual Redline everywhere is Best Practice. God In Heaven ...

Pulling the gear-shaft out with a counter-clockwise twist clunks us into some-gear-or-another and, without looking back to check the levels of Bunting's alarm, I whizz the revs up to Plainly Unreasonable and depart for a couple of back-street laps just to get the hang of things.

Okay ... breathe normally. The engine might sound horrible but we're not actually going very fast - or any sort of fast, come to that - and within a few minutes the gear-change becomes comprehensible. Sort of. Time to join the real world ...

For the first time in memory, the simple act of pulling into traffic becomes a scary experience. Acceleration is not the word; it's more like casting free the mooring line and drifting, swirling, into a raging floodtide. Gaining simple parity with normally flowing traffic requires deafening extraction of the power available augmented by plunging the gearshift in and out of the dash like driving a lance into a wombat. 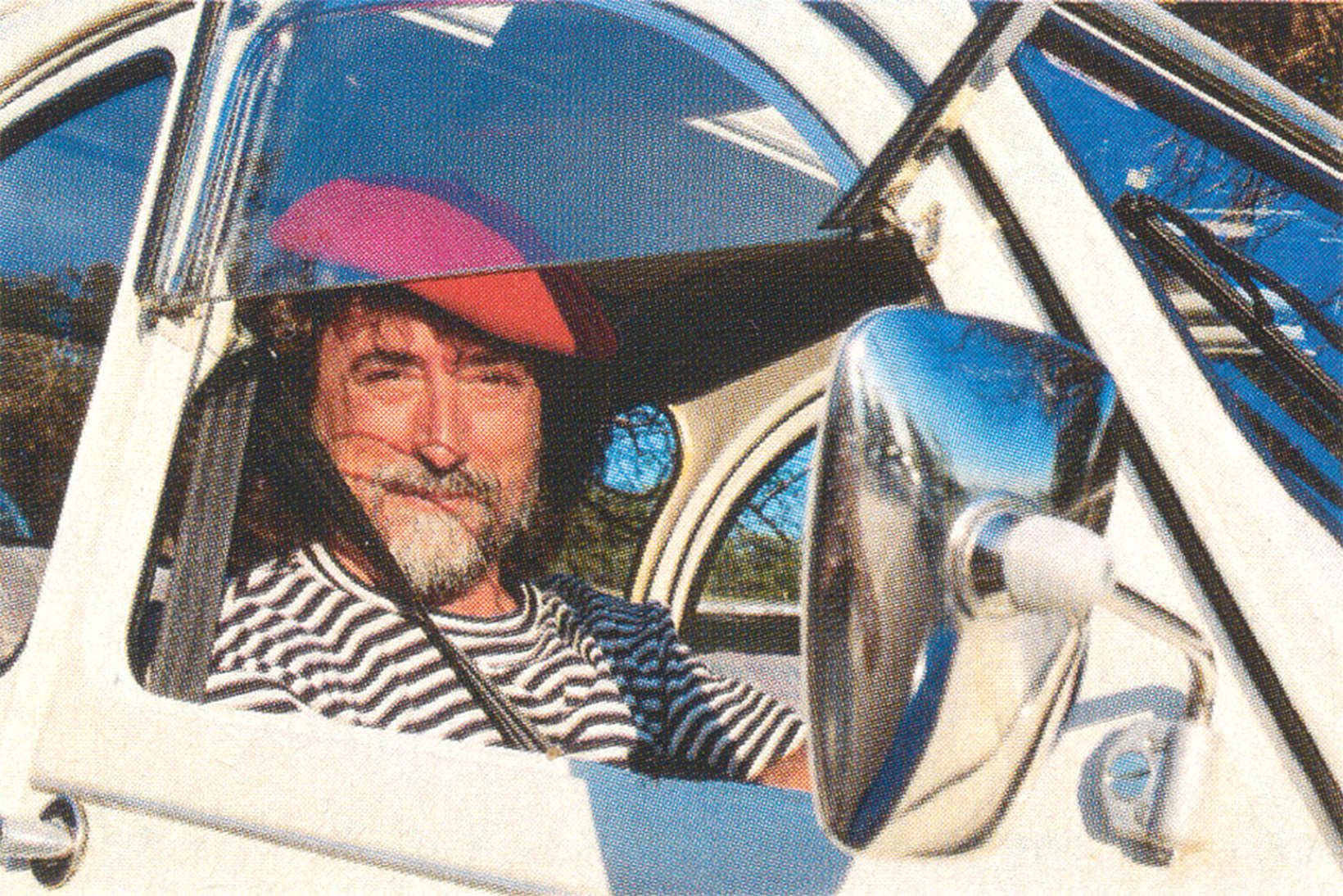 And once you've got speed up you never want to let it go. I can just imagine 10,000 of these puppies defending their velocity around the Arc de Triomphe. 'Alors, mes amis! I'll give you three wee bolts!'

Even the usual serenity of the freeway requires effort. Cross-winds play merry havoc with direction and roar through the cabin. The 'big' motor will cruise all day at 100km/h in a state of perpetual tantrum but your ears won't stand it. It's only back on the by-ways that the thing starts to make sense. What wonderful sense it is. 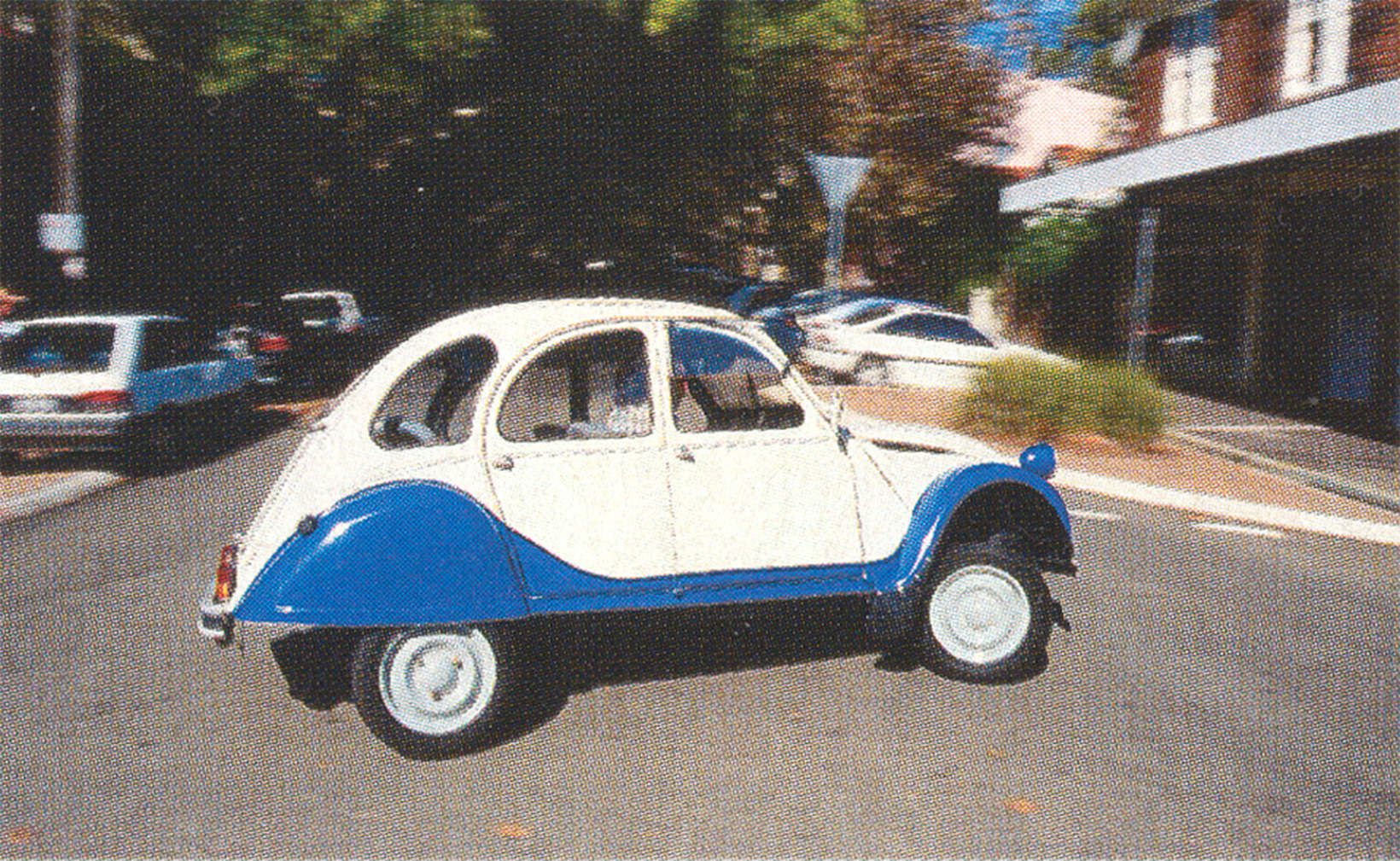 The interconnected suspension may not see much work in ploughed fields these days but the incredible ride quality means that broken roads and speed bumps are someone else's problem. And transforming modest pace into impressive averages is another of the suspension's talents. The first comer may disclose big roll angles but the O-ring sized front tyres just haul on through and I never do get to find out how the brakes work.

And on those more gentle roads, framed by the fluted snout and the Noddy lights, the 2CV that caused a rethink of the car 50 years ago now invites a re­evaluation of driving. The lesson is half a century old but still worth heeding: Wind down and enjoy. Relax. Don't worry. It'll still be there when you arrive ... at an end made even more pleasurable by the means.

Protect your Citroën. Call Shannons Insurance on 13 46 46 to get a quote today.