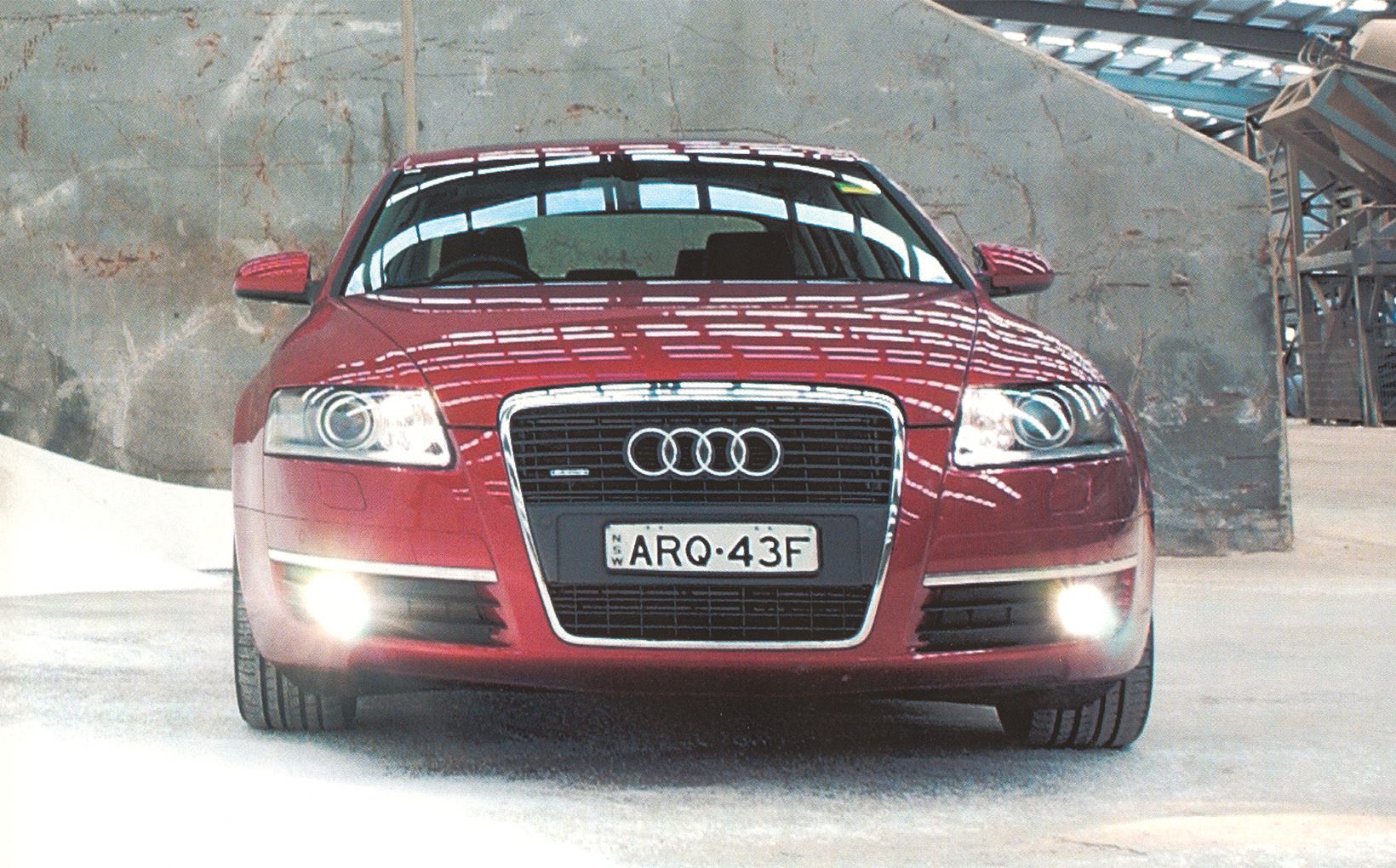 First impressions may be illuminating, but don't bet your life on one as final judgement. Otherwise, I'd have no mates and a curtailed career cleaning bedpans. What concerns us here is Audi's all-new A6 and its ability to tap into your subconscious - subtly, effectively, unexpectedly.

First time I saw Ingolstadt's large sedan, I yawned with disinterest. First time I drove it, I could sense the big improvement, but remained equally underwhelmed. And then the model we decided to feature - the sexiest A6 (4.2 quattro) in the funkiest colour (Canyon Red) - seemed to be an incongruous mix of plushness with a punishing ride. After taking the bright-coloured A6 V8 on a 12-hour round trip to attend a wedding, with five on board and its boot loaded, I came back wondering aloud how Audi's latest had a chance in hell of going anywhere at 2004's Car of the Year.

Its ride quality was, to put it bluntly, dreadful, and its steering felt nervous, yet vague at the same time. Relished its wonderful drivetrain, of course, but even then our A6 V8 couldn't match Audi's claimed performance times. And its chances of seating five comfortably were about as likely as George Dubya creating a foreign policy popular with the rest of the world. We had to stop and perform a seating shuffle five times in six hours.

What Audi didn't tell us was that our red 4.2 quattro had optional sports suspension ($1000), and that the Pirelli P Zeros coating its chunky 18-inch alloys were choking on 15psi more air than the tyre placard recommended. Needless to say, after some fiddling with pressures, the range-topping A6 was transformed into what is Audi's most accomplished 5 Series rival yet. 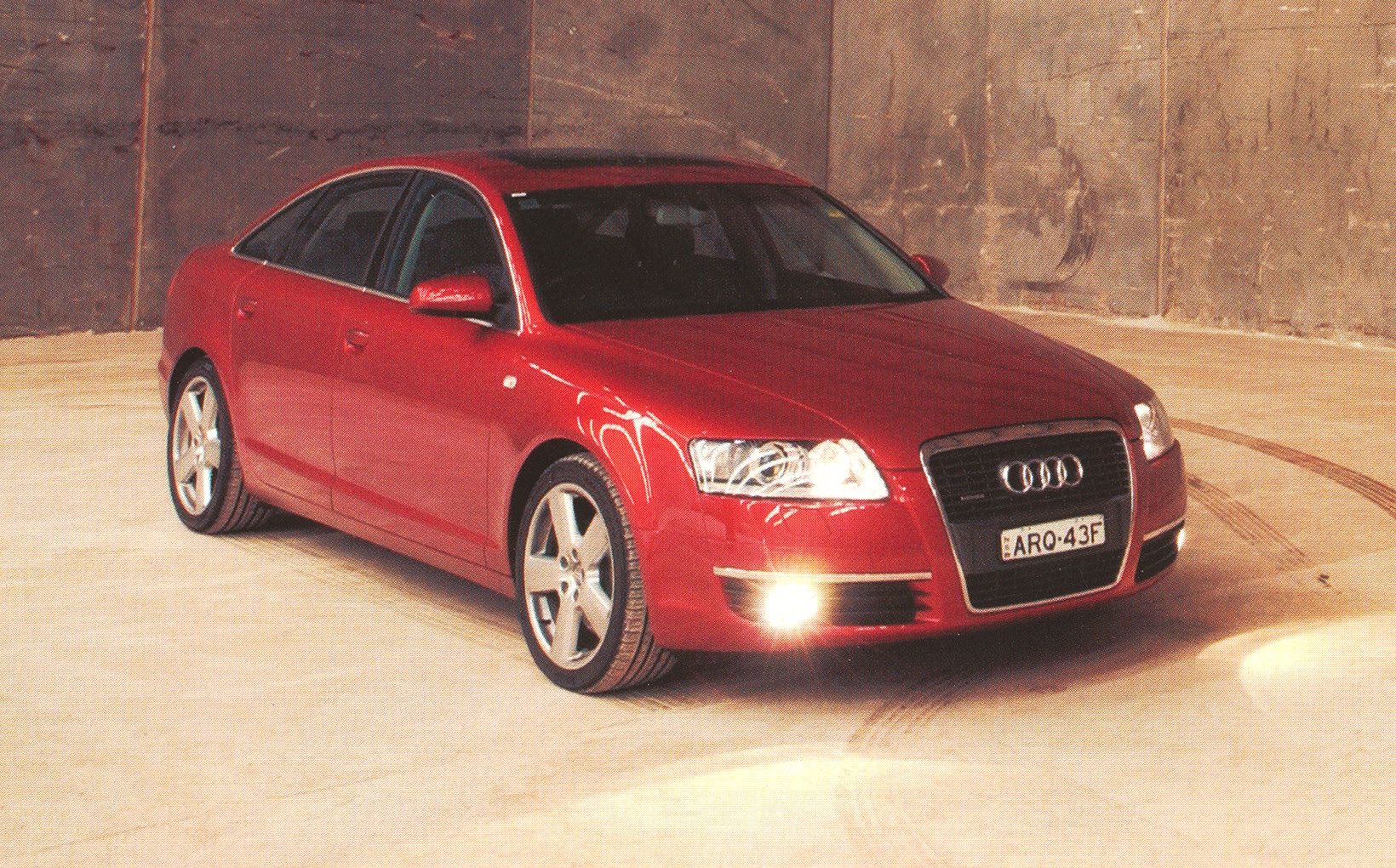 Stealing top billing in the A6's list of turn-ons is its outstanding drivetrain. Doesn't matter which engine and gearbox combination you choose - all offer a seamless combination of syrupy refinement and smooth, seductive urge. Even the base 130kW 2.4-litre V6 is a sweetie, so it comes as no surprise to discover that the 246kW 4.2-litre V8 (from the A8) is a multi-talented beast. It's incredibly smooth, yet brimming with V8 character and howls a crisp burble that intensifies as its tacho swings rapidly towards 6800rpm. There's tonnes of luscious torque to play with, but you can't help wanting to hear the A6 V8 sing its heart out as it slurs seamlessly through its new six-ratio transmission (14kg lighter than the old five- speed unit). And even when you work it, the V8 has only a moderate thirst - the test car averaging 14.9L/100km over nearly 900km of hugely varied, but always spirited driving. Shame it only swallows 98-octane premium brew, unlike the 2.4- and 3.0-litre V6s that will each accept cheaper 95.

Like the A8, the A6 V8 complements its transmission's pseudo-manual tiptronic mode with a pair of steering-wheel paddles that are great to use when the blood is up through a few corners, or even when engine braking. Simply flex the downshift paddle to select the appropriate gear, feel the A6 charge forward or ease up to your requirements, then continue cruising. If the selector is in 'S' or D' (not tip-shift mode), it simply slips quietly back into full-auto mode once the transmission senses no further driver input.

Great drivetrains are almost a given with Audi, but great dynamics? Not exactly. Things are improving at Ingolstadt, though, and the new A6 - with aluminium-intensive suspension derived from the impressive A8 - undoubtedly makes huge strides for a large, four-ringed sedan. But not without concessions, which I'll come to in a moment.

In V8 guise, with 245/40ZR18 P Zeros, AWD and optional sports suspension that drops the car 20mm, and firms up both springs and dampers, the A6 is bloody impressive. Its grip on the road feels limitless, it has great body control and it adopts a surprisingly neutral (and satisfying) stance when cornering.

You do need to drive the A6 quattro the way it prefers, though - feeding in steering early, waiting for the front tyres to bite, sensing some weight transfer onto the outside rear wheel, and then hard into the right pedal to experience its tremendous pull. The A6 only understeers on really tight corners, but its rear end adjusts outwards enough to maintain composure, and performs such a manoeuvre even with stability control activated.

Push too deep and too hard, though, and the physics of having a large (even all-alloy) V8 mounted ahead of the front axle line can't help but produce understeer ably contained for the most part by the A6's excellent ESP system that automatically engages above 70km/h, yet has a threshold high enough not to knacker the quattro A6's prospects as a driver's car. In keeping with the V8's pace and dynamic proficiency are its fantastic brakes - whopping ventilated discs at both ends (347mm front, 330mm rear) with force distribution, brake- assist, and a clever brake-disc wiping system that lightly applies the brake pad to each disc at defined intervals to remove any moisture build-up in wet conditions in order to maintain full braking power.

You can't help wanting to hear the A6 V8 sing its heart out as it upshifts seamlessly.

Now those concessions. Despite impressive accuracy and freedom from annoying kickback, the A6's steering isn't quite up to its chassis. Like the larger A8, the A6 is brilliantly manoeuvrable in low-speed urban situations, but its steering's light weighting at speed takes time to acclimatise to - especially when there's little information provided about what the front wheels are doing either side of straight ahead. Once into a turn, the A6 points respectably, though you can't help but wish for more feedback.

And then there's that contentious ride quality. In order to ensure the front-heavy A6's handling at least approaches that of a perfectly balanced 5 Series, Audi has had to firm up its springs and dampers, to the detriment of its ride. Stock suspension- equipped A6s ride acceptably well, but aren't too clever at initial bump compliance, and tend to feel somewhat knobbly over uneven irregularities, even though high-speed ride on undulating roads is well-damped and nicely disciplined. The Sports-suspended 4.2 quattro, on the other hand, doesn't ride well - taut, yes, but compared with its immediate rivals, unnecessarily so for a 1745kg luxury sedan. To put the A6's ride into context, an HV Coupe 4 is noticeably more composed over all surfaces. Best stick with the standard set-up and invest the change elsewhere.

There's little need to spend extra on the A6's interior - especially the range-topping $145K 4.2 quattro. It's a high-class environment, and its driver-oriented dash is an ergonomic masterpiece, proving dead-easy to use and including Audi's brilliant, incredibly accurate sat-nav system with the world's coolest map graphics. In-cabin refinement is superb and the V8's $1600 optional sports buckets (heated, with full electric adjustment, including lumbar) are very supportive, yet capable of accommodating larger bodies with headroom to spare. 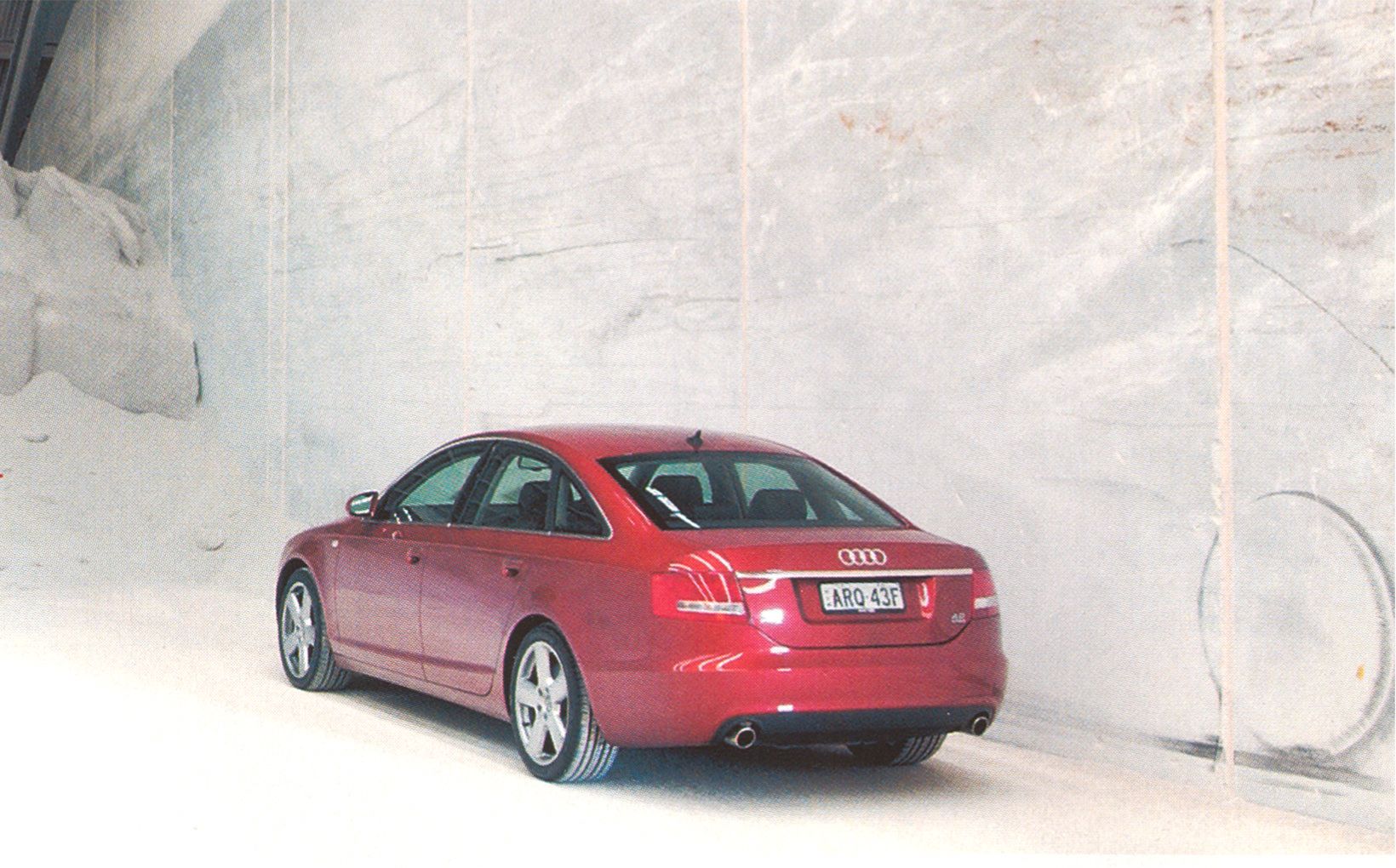 The A6's rear seat offers plenty of legroom and opulent seating for two, as it should when the A6's wheelbase measures 14mm longer than a Falcon's. But its centre position is criminal - feeling like two slabs of concrete wrapped in soft leather - and a pointless waste in a car as big as the A6. But as a four- seater, it makes a wonderful tourer. Despite accommodating a rear differential for its quattro drivetrain, as well as a full-size 18-inch alloy spare, the A6's beautifully finished and well-shaped boot swallows a massive 546 litres.

Undoubtedly, there are many splendid things about the new A6. Its squat form looks great, and seems to appear more shapely and muscular the more you stare at it. Audi's now- trademark "goatee' • grille treads a similar path. General fit and finish are exceptional, as is the tactility of all the A6's controls. And its safety equipment is class- best - two-stage front airbags, front- and rear-seat side airbags, full-length curtain airbags, five lap-sash seatbelts (all with pre-tensioners and load limiters), latest-generation ESP 8.0, tyre-pressure monitors, you name it. That the A6 scored five stars in Euro NCAP crash testing (one more than the E60 5 Series) should go without saying.

For a base price of $144,800, however, you'd expect the flagship 4.2 quattro to at least include a kitchen sink. Not surprisingly, it doesn't, but then who would've expected to pay extra for metallic paint ($2000), along with a solar sunroof ($2950) that keeps the climate. control running when the car is parked, and thumping Bose stereo speakers ($1850)?

The 4.2 quattro is hardly the everyman's A6 variant, though. Most punters would be better served buying the fabulous 3.0 TDI quattro (which we'll road-test soon) and saving $49,100 in the process.

What the A6 4.2 does do, though, is prove the Ingolstadt firm is well on its way to producing t cars for driving enthusiasts, not just for poseurs who want to look cool and sporty, but unfortunately don't know any better.

The A6 still can't match, say, BMW's 545i Sport for balance, steering or ride quality, but the V8 quattro is a grower. And its dynamics are good enough that enthusiasts shouldn't judge this car by its Audi badge. 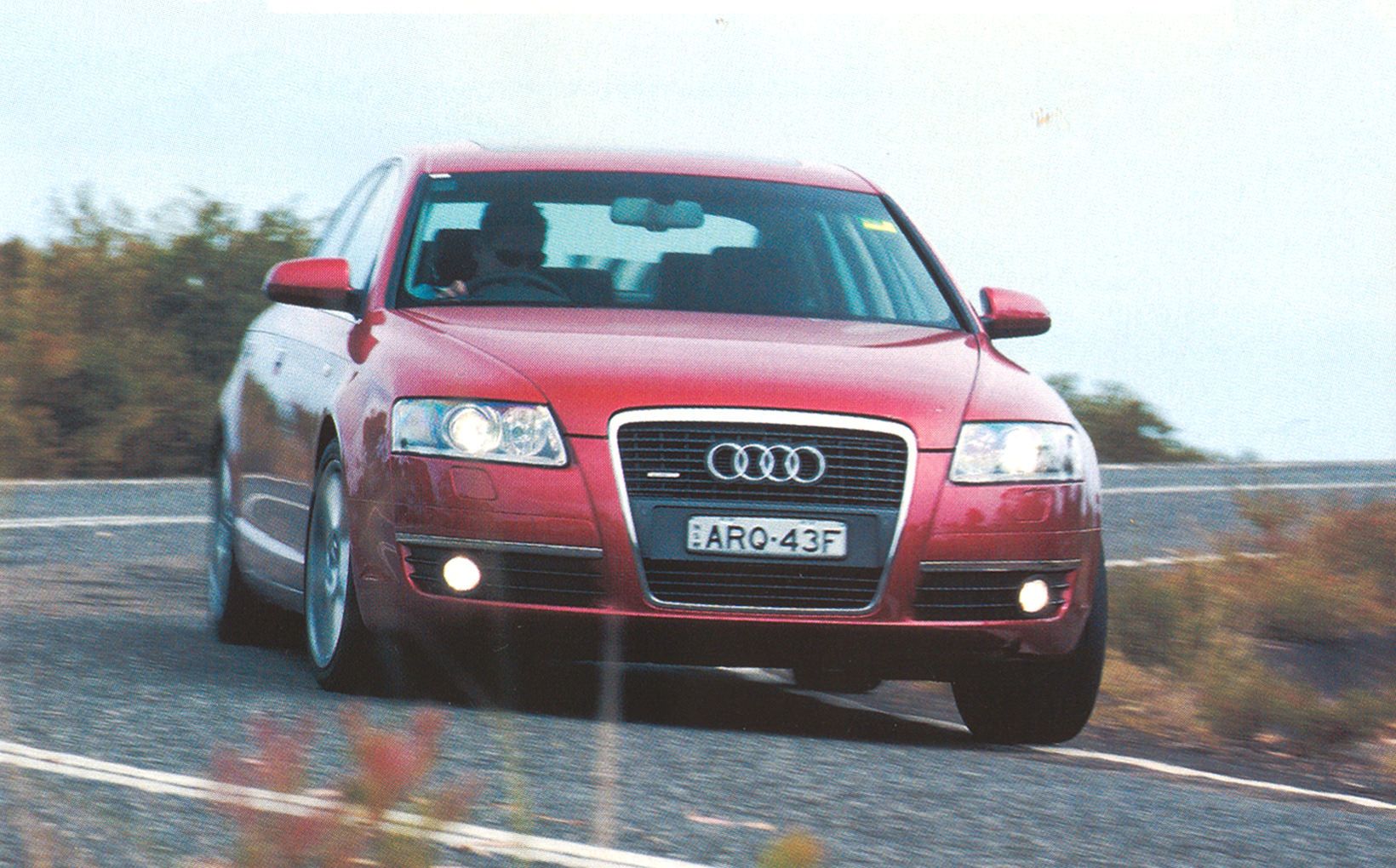 Sports-suspend A6 V8 is effortlessly rapid, but ride is firm

Over-firm ride; steering vague at straight ahead; costs too much