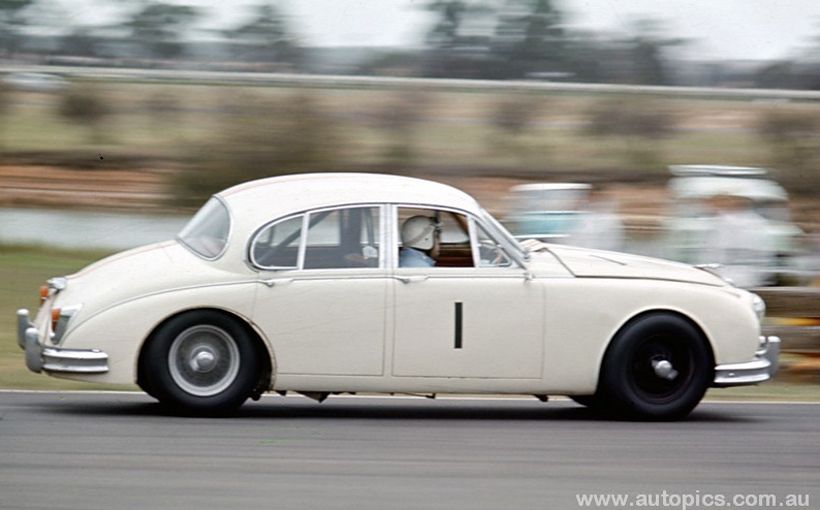 The early 1960s was a golden era for Jaguar in Australian touring car racing, as it was in the UK and Europe, with the classy British import claiming four ATCC titles in a row. Here Bob Jane’s magnificent Mk 2, powered by a unique 4.1 litre ‘big bore’ version of the company’s 3.8 litre twin-cam straight six, is captured in full flight at Sydney’s Warwick Farm in 1964. Note how the rear wheel spats were removed for lighter weight, greater tyre clearance and ease of access. The bonnet was also slightly raised to release engine bay heat and improve engine cooling.

“It was officially timed at Bathurst on the old Conrod Straight at 151 mph (242 km/h) and was written up in (UK) Motor Sport magazine at the time as the fastest Jaguar saloon in the world,” said Bob Jane’s former chief mechanic John Sawyer. “That car was totally dominant in its day and it was only the advent of the Mustangs that brought its reign to an end.”

Bob Jane’s legendary Jaguar Mk 2, twice winner of the Australian Touring Car Championship in 1962-63, ranks as one of the all-time greats of Aussie touring car racing. According to Sawyer, it won a total of 70 races and set new lap records at every circuit it competed on.