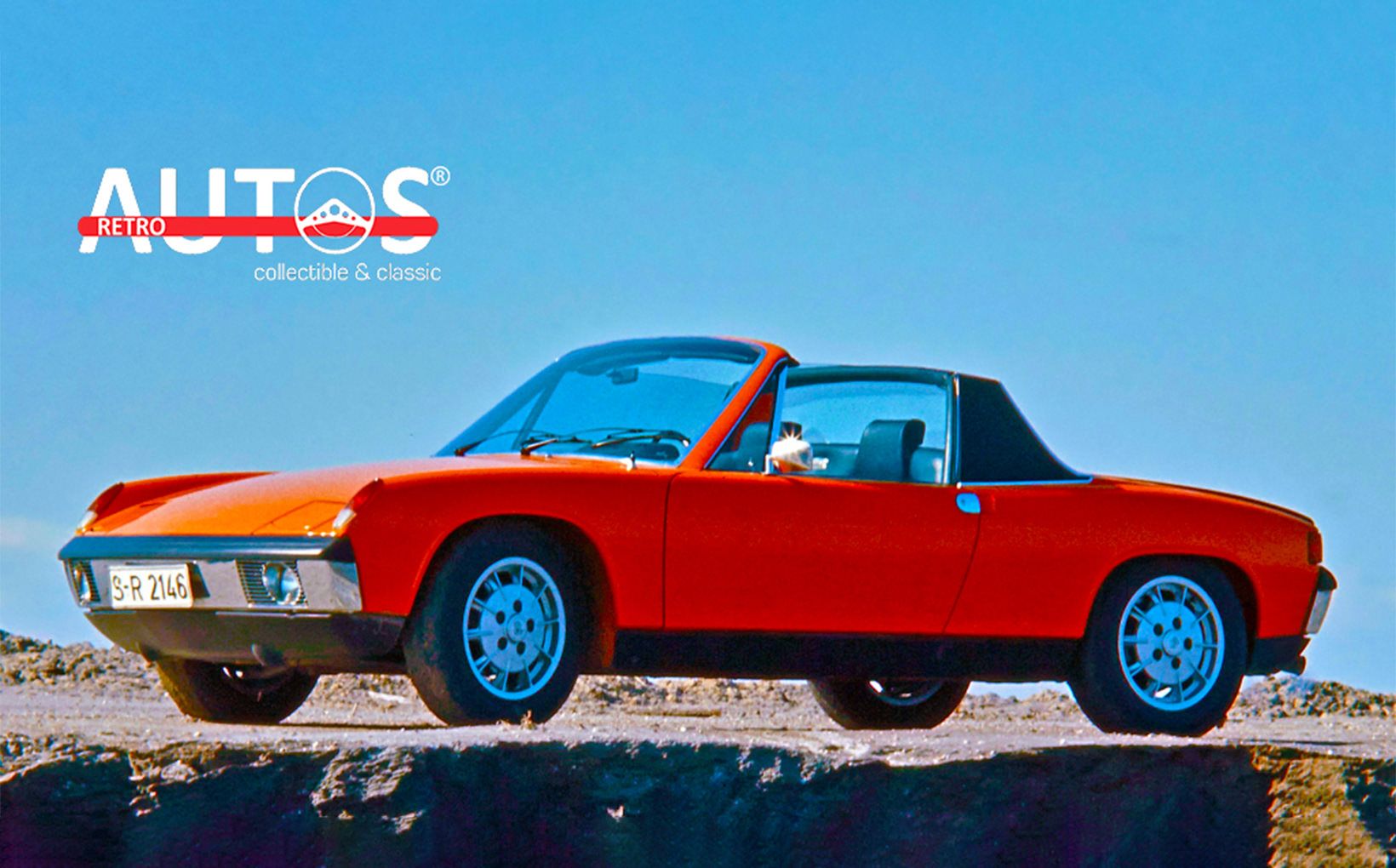 This year just past has seen all manner of automotive anniversaries. There was the 100th anniversary of car makers Citroen, Bentley and Armstrong Siddeley.

The Mini turned 60 to a flurry of motoring stories about the how great it was and is. Also celebrating a 60th anniversary was the Triumph Herald, while the Rover P4 clicked over to 70. The Ford Capri and Maverick both hit 50 as did the HT Holden and Ford’s XW Falcon.

But here’s one anniversary that was quietly celebrated and little publicised: the VW-Porsche 914. Yep, it’s 50, too. Kinda makes you feel old, knowing that, eh?

The 914 was a stylish mid-engined, targa-topped, four and six cylinder, two-seat roadster which was the troubled outcome of a collaboration between Volkswagen and Porsche that commenced in early 1968. 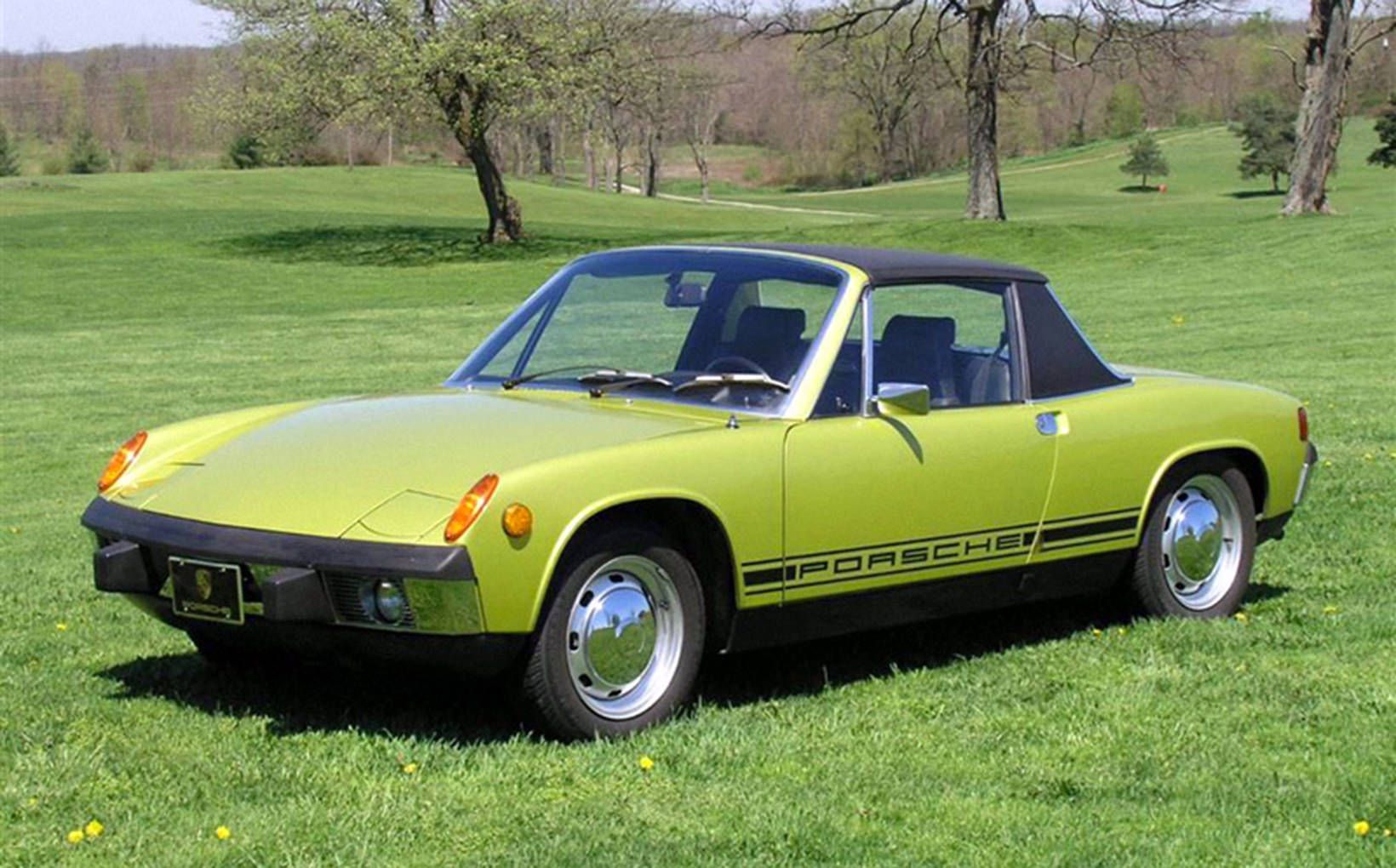 The 914 in its American livery. The Porsche “call outs” on the sills ensured everyone knew what you were driving.

The car had its origins with VW wanting a successor to its Karmann Ghia sports coupe. At the same time, Porsche was keen to have a more affordable sports car to position below its 911.

Then the problems began. During the development process there was a change of VW management following the sudden death of Nordhoff in April 1968. Opinions differed as to who owned the rights to the car. After some haggling and debate a solution was agreed with the new boss of VW, Kurt Lotz, and the car was marketed as a VW-Porsche in Europe and a Porsche in the USA. 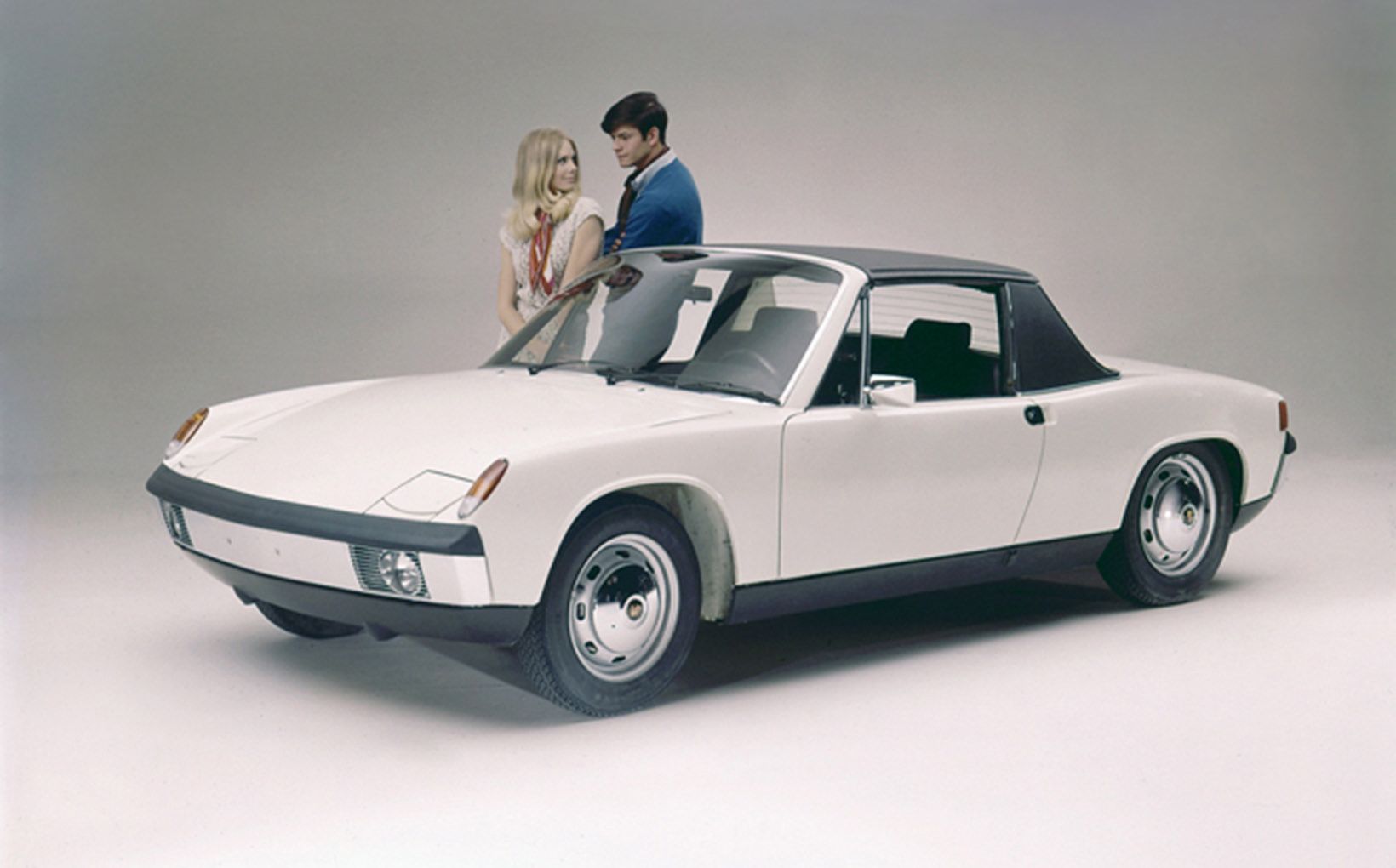 The 914 has lived in a shadow ever since its release. It has been labeled by a small section of the motoring media as one of the “worst” sports cars of all time. It is an accusation without any real evidence to back it up, from what I can see. It seems that some purists simply do not like that VW had a major input to a car with a Porsche badge on its panels.

Despite what those pernickety folk may think, the 914 became a major success, especially in the USA, where it scored the Motor Trend magazine Import of the Year award in 1970. During the 914’s seven year production run 118,969 were sold making it one of the best selling sports cars of its time. It outsold the Porsche 911. 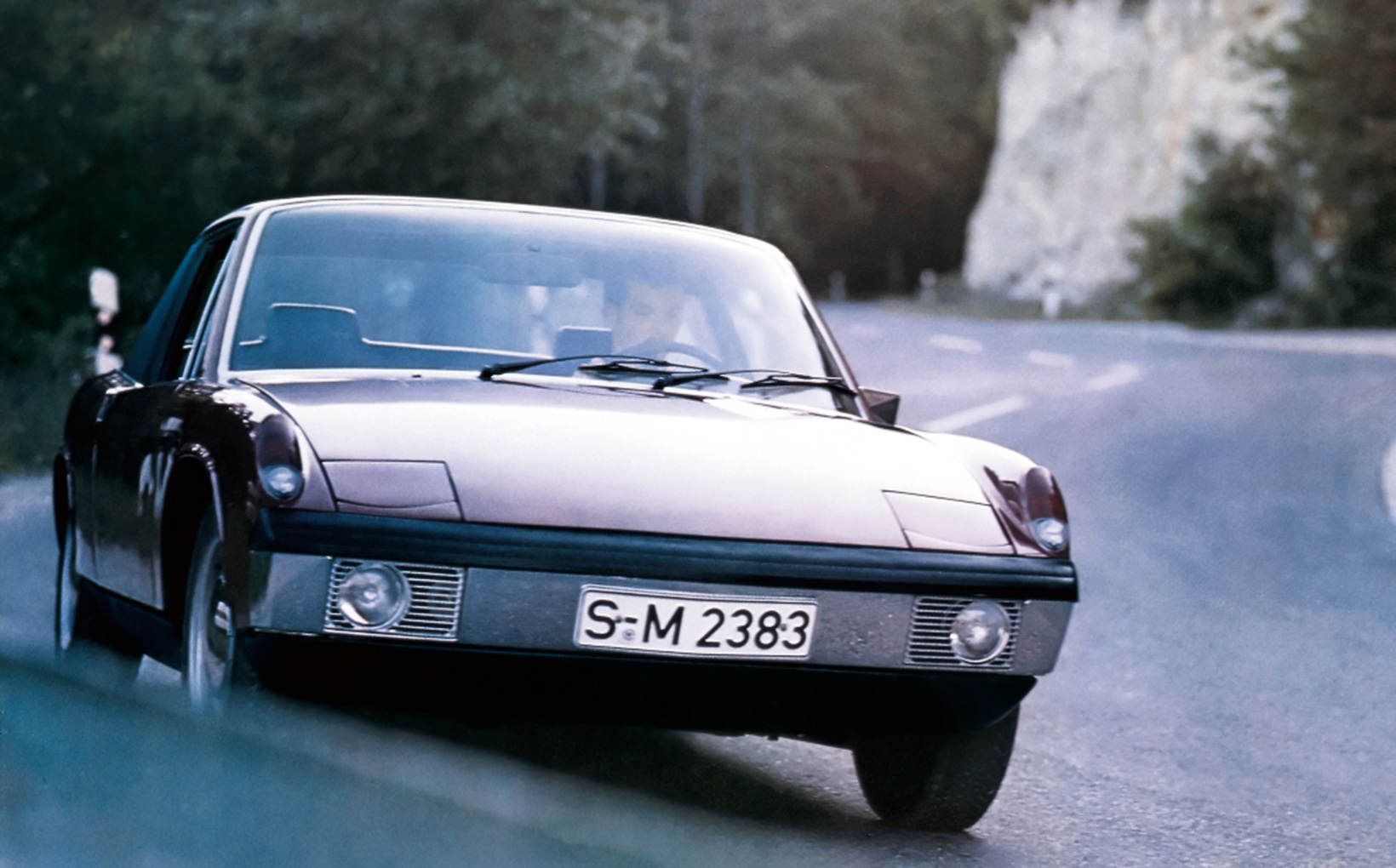 The 914 demonstrated great agility through the turns. Acceleration was less impressive in the four cylinder models.

The 914 gained priceless media exposure on James Garner’s Rockford Files TV series. It was the car driven by the main character’s (Jim Rockford) lawyer, Beth Davenport, played by Gretchen Corbett. Rockford would use it when his Pontiac Firebird Espirit was “in the shop” being fixed from yet another fender banging car chase. Two 914s appeared in the show—one yellow and the other orange.

The image of Garner that accompanies this column was taken at the intersection of Bel Air Rd and Amapola Lane, Beverly Hills. Nearby, at 750 Bel Air Rd, is the Chartwell Estate. Chartwell’s exterior was used in the Beverly Hillbillies TV series. As of this writing Chartwell is for sale. It went on the market in 2018 for $US350 million but has since had a price cut to a more affordable $US195 million. 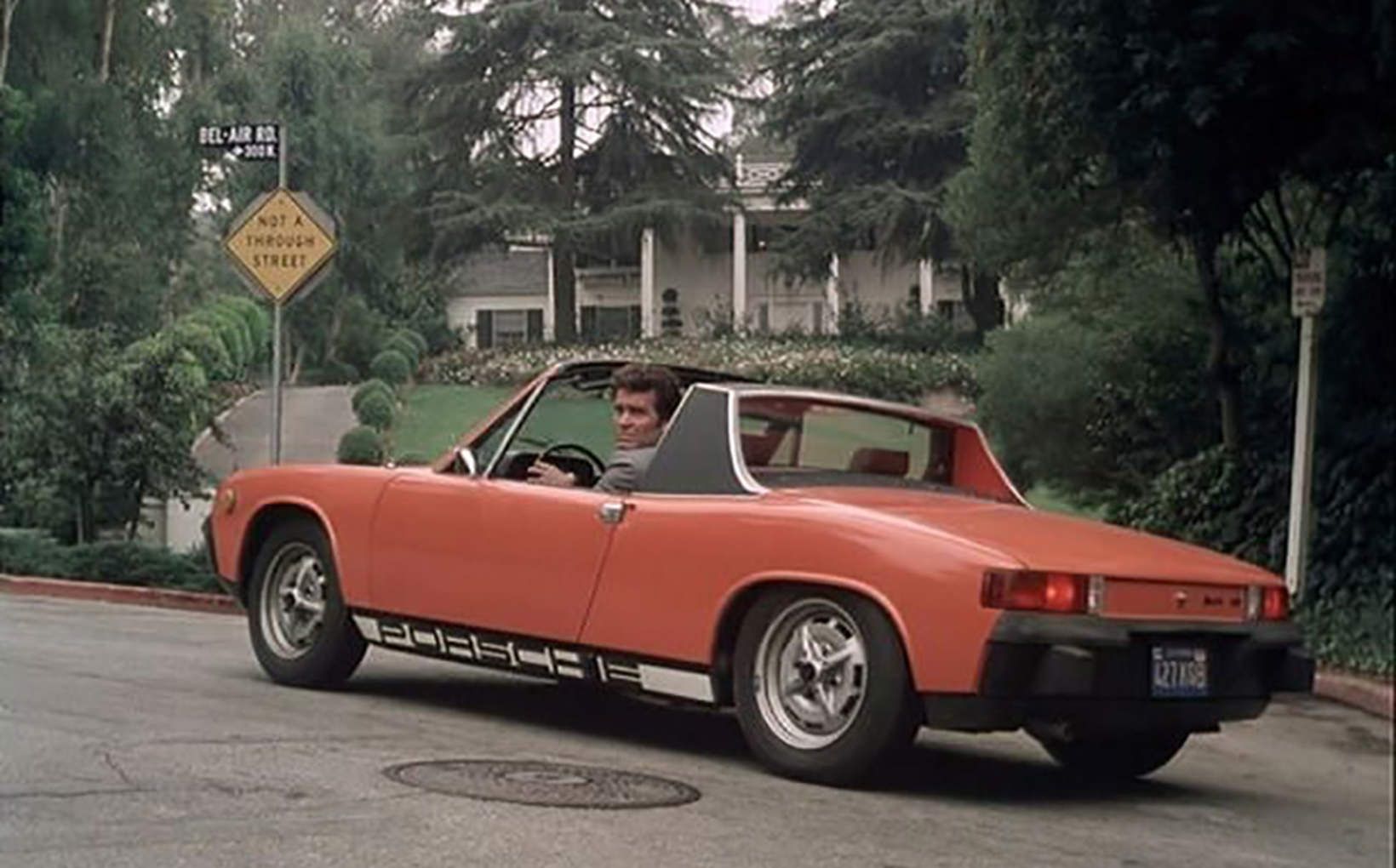 There is no word about whether the two Rockford 914s have survived. If they are still drivable you can bet they would be worth something to movie car collectors. One of the Firebirds used in the TV series and later owned by Garner was sold at auction for $US115,500 in early 2019, about ten times its value had it not been for its TV heritage.

The 914 was only ever built in left hand drive. Any right hand drive examples have been converted in the UK or Australia. A 1970 914-6 went under the hammer at Shannons September 2019 auction in Melbourne for $102,000. And it never appeared on TV.

No doubt about it, a Retroautos mid-month column is full of information!

Holden Commodore design to driveway: The V-cars yo...