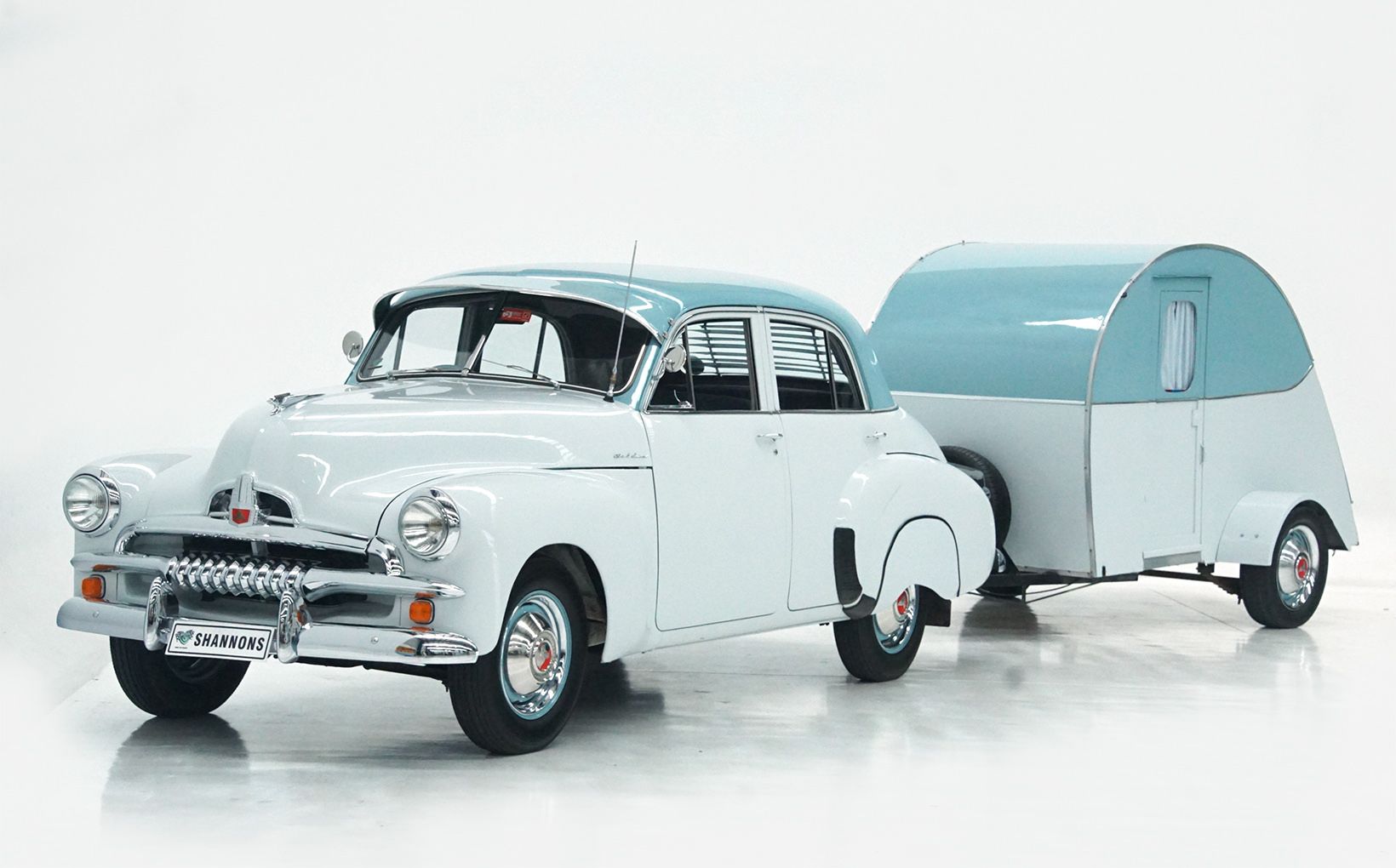 They won’t break the bank, but there are some very interesting classic vehicles crossing the block at Shannons upcoming Melbourne Autumn auction on March 2 that enthusiasts shouldn’t let slip through their hands. 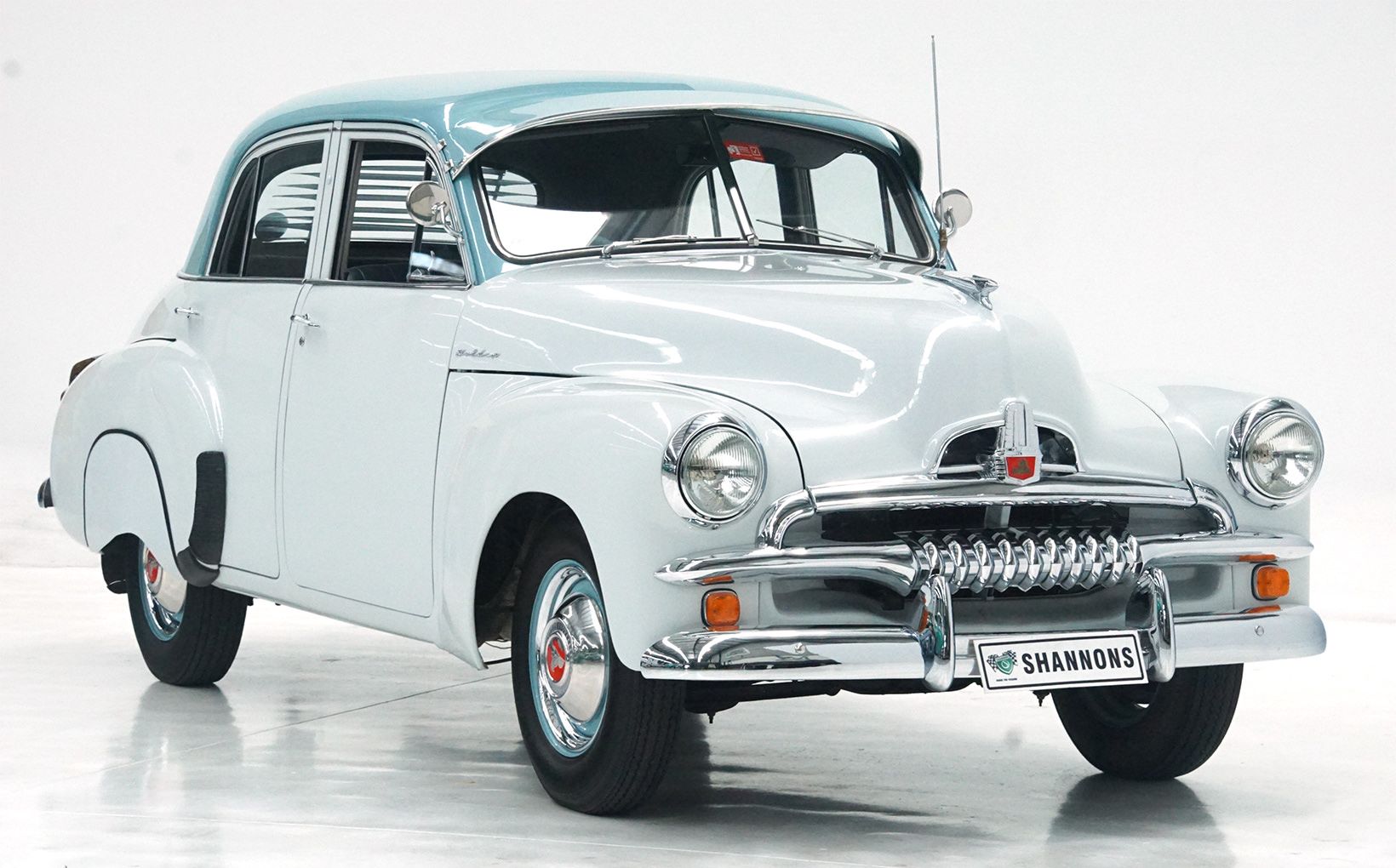 This three-owner FJ, with just 79,443 miles, believed genuine, showing on its odometer, has been the beneficiary of a complete body-off nut and bolt restoration and is expected to sell with its matching teardrop trailer for $35,0000-$45,000.

The decision by General Motors to ‘park’ the hallowed Holden nameplate is likely to increase interest in early models, such as the beautiful 1954 FJ Special Sedan and its matching teardrop caravan that are being offered together at Shannons Melbourne Autumn Auction on March 2.

The three-owner FJ, with just 79,443 miles, believed genuine, showing on its odometer, has been the beneficiary of a complete body-off nut and bolt restoration, while its companion, matching 1956 Sports Minor teardrop caravan has also been restored

Perfect for displaying at club events and runs, the Holden is finished in two-tone dark blue over light blue, with a restored matching dark blue leather interior and excellent exterior chromework. An original radio, wheel spats and a sunshield are amongst its desirable period options.

The FJ represents a great opportunity for the Holden enthusiast to pick up a lovely, genuine, low mileage FJ and are quoting a guiding range of $35,000-$40,000 for both the car and its trailer. 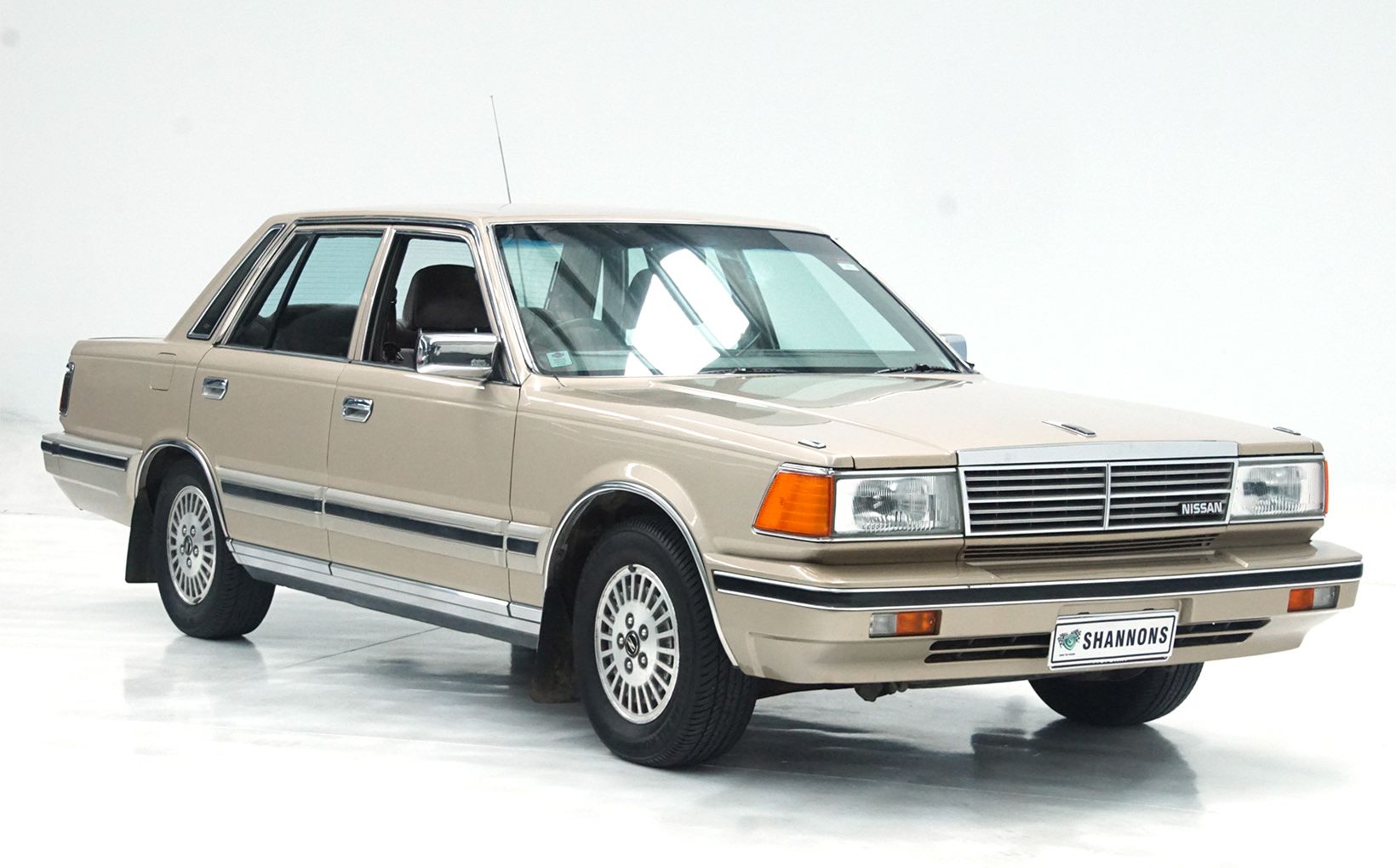 This oddly-named Nissan Cedric luxury saloon in pristine condition is expected to sell with 'no reserve' for $4,000-$6,000.

In the days when many Japanese cars had names that made Australians giggle, there was the Nissan Cedric.

That’s what Nissan’s flagship was called in its domestic market, but the export version of the luxury four-door sedan that came to Australia was more acceptably re-badged as the Nissan 300C.

With this level of equipment, Nissan intended the 300C to compete with top European luxury models like the Mercedes Benz S Class and BMW 7 Series, but it made little impact in markets outside Japan.

Shannons have a pristine, two/three-owner 1985 example with a full-service history at its Melbourne Autumn Auction on March 2.

Presented in very good condition throughout with Gold metallic paintwork and maroon/brown velour trim, this well-cared for and rarely-seen Nissan luxury model is expected to appeal to the increasing number of Japanese car collectors and sell with ‘no reserve’ in the $4,000-$6,000 range. 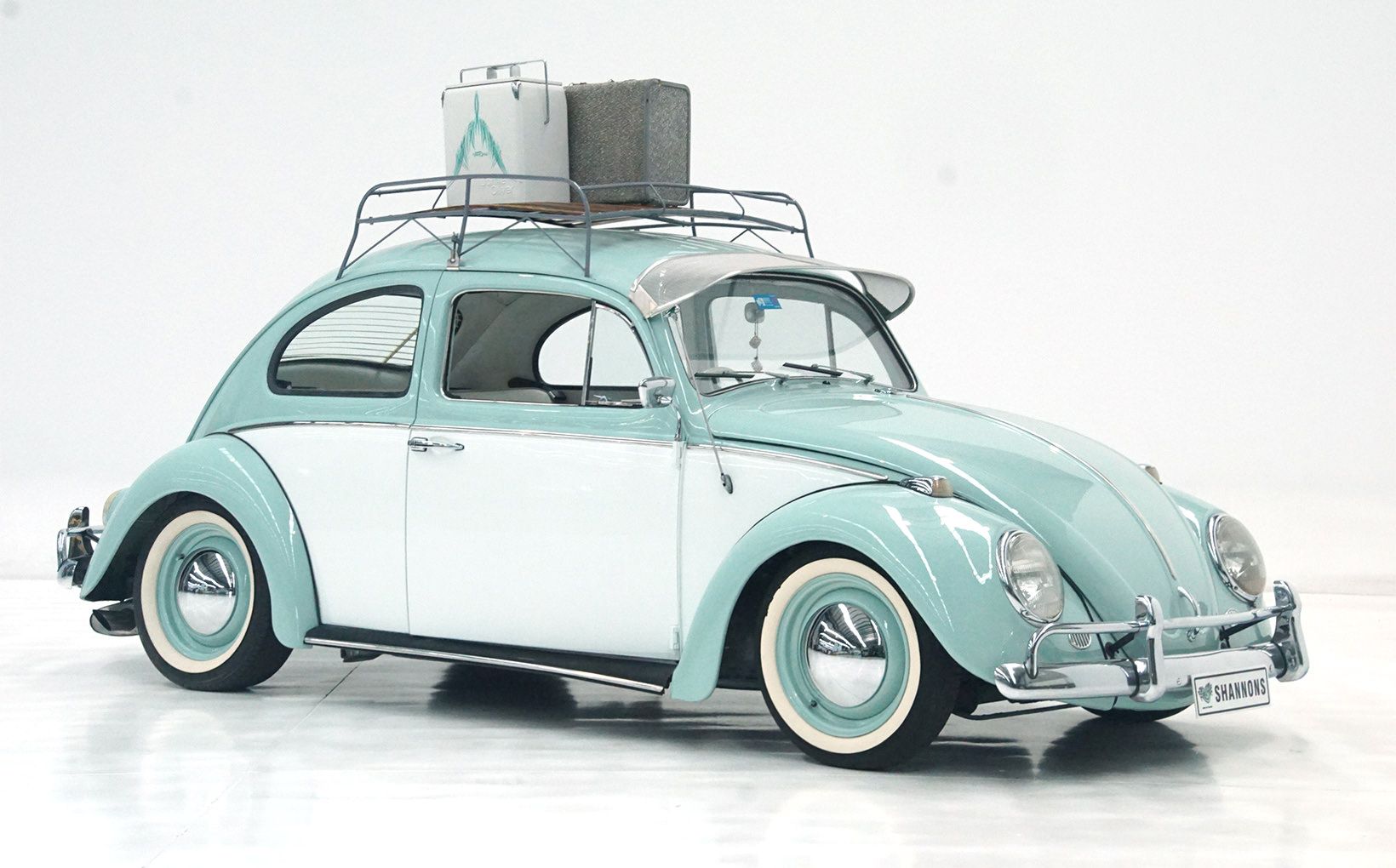 Production of the Professor Ferdinand Porsche-designed Volkswagen Beetle may have ceased officially after 20 million examples were built, but one of the most important cars of all time lives on in the hearts of enthusiasts around the world.

Every serious car collection should have one and Shannons have a great 1964 'Twin Port' 1200 model at its March 2 Melbourne auction.

Expected to sell with ‘no reserve’ for $15,000 - $20,000, the cool ‘Cal-look’ sedan on offer is presented in smart light blue/green over white paint and retains its original trim with good chrome, a period accessory silver mesh sun visor over the windscreen and a luggage rack on the roof.

Originally a Queensland car, the Beetle then made its way to Sydney where it was purchased 10 years ago by the current enthusiast owner and has since been used sparingly.

Now fitted with 1600cc barrels and pistons and twin-port heads to cope with modern traffic, its great stance is owed to a set of adjustable coil-over spring/shock absorbers. 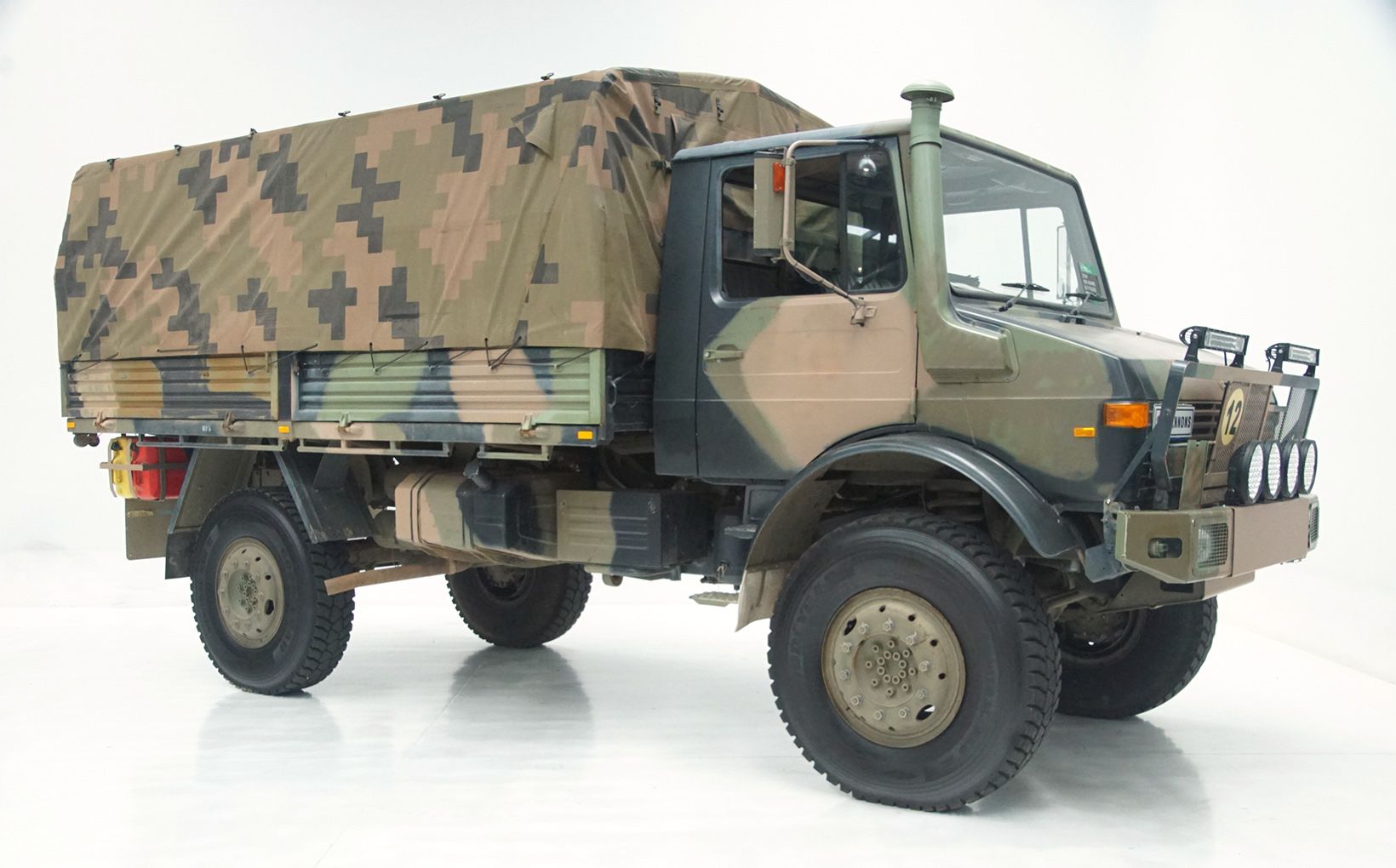 Want to really get away from it all? Shannons have the perfect escape vehicle – a 1986 Ex Australian Army Mercedes Benz Unimog – at its March 2 Melbourne auction, ready for farming, industrial duties and remote area expeditions.

Regarded a perhaps the world’s best registerable all-terrain vehicle, the Unimog was assembled by Mercedes-Benz Australia in Melbourne and features a 5.7 litre turbocharged six-cylinder diesel engine which drives through an eight-speed manual gearbox.

The Unimog doesn’t need high-low range, such is the spread of its ratios in the selectable four-wheel-drive system, which utilises a series of locking differentials, making it ideal as a workhorse on large properties or as a cross-country cruiser.

A prominent Australian racing driver famously converted one to a camper and headed off for a lap of Australia, while others have been used for serious work in the mining industry after completing their military tour of duty.

Offered in good operating condition, the Unimog is being offered with ‘no reserve’ and is expected to sell in the $18,000-$22,000 range on March 2.