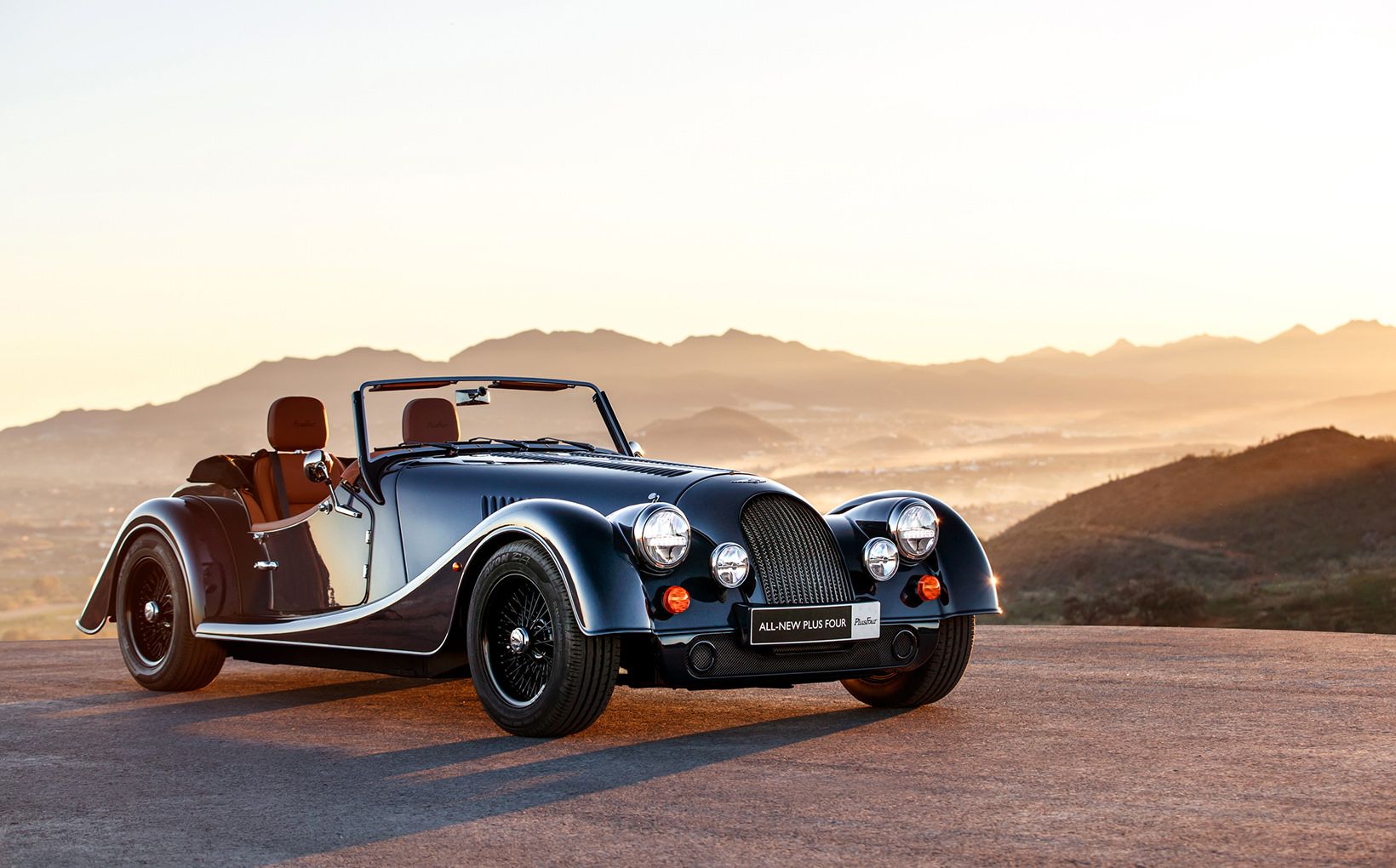 THE YEAR is 1936, and the fear and uncertainty that grips much of the world would be unfamiliar to many of us in 2020.

Like back then, fascism, war, unemployment and political unrest are never far from the headlines today.

Obviously, the lack of the technologies that seem so vital to our everyday lives would render the 1930s archaic and even alien nowadays, not least how far cars have come over the ensuing decades.

However, if you’re due to emerge from 85 years of cryogenic stasis sometime in 2021 and stumble across a Morgan dealership, you’d be forgiven for thinking otherwise, since the Plus Four that was unveiled in early March of this year looks broadly similar to the 4/4 that hit the streets back in 1936.

That said, these models only appear similar in design; in actuality, they’re as different as somebody who bears a striking resemblance to a great grandparent would be.

Let’s begin with the badge. The original 4/4 (for four wheels and four cylinders – as any brand aficionado will tell you, earlier Morgans offered fewer of both) was launched during the mid-30s as the company’s volume seller. 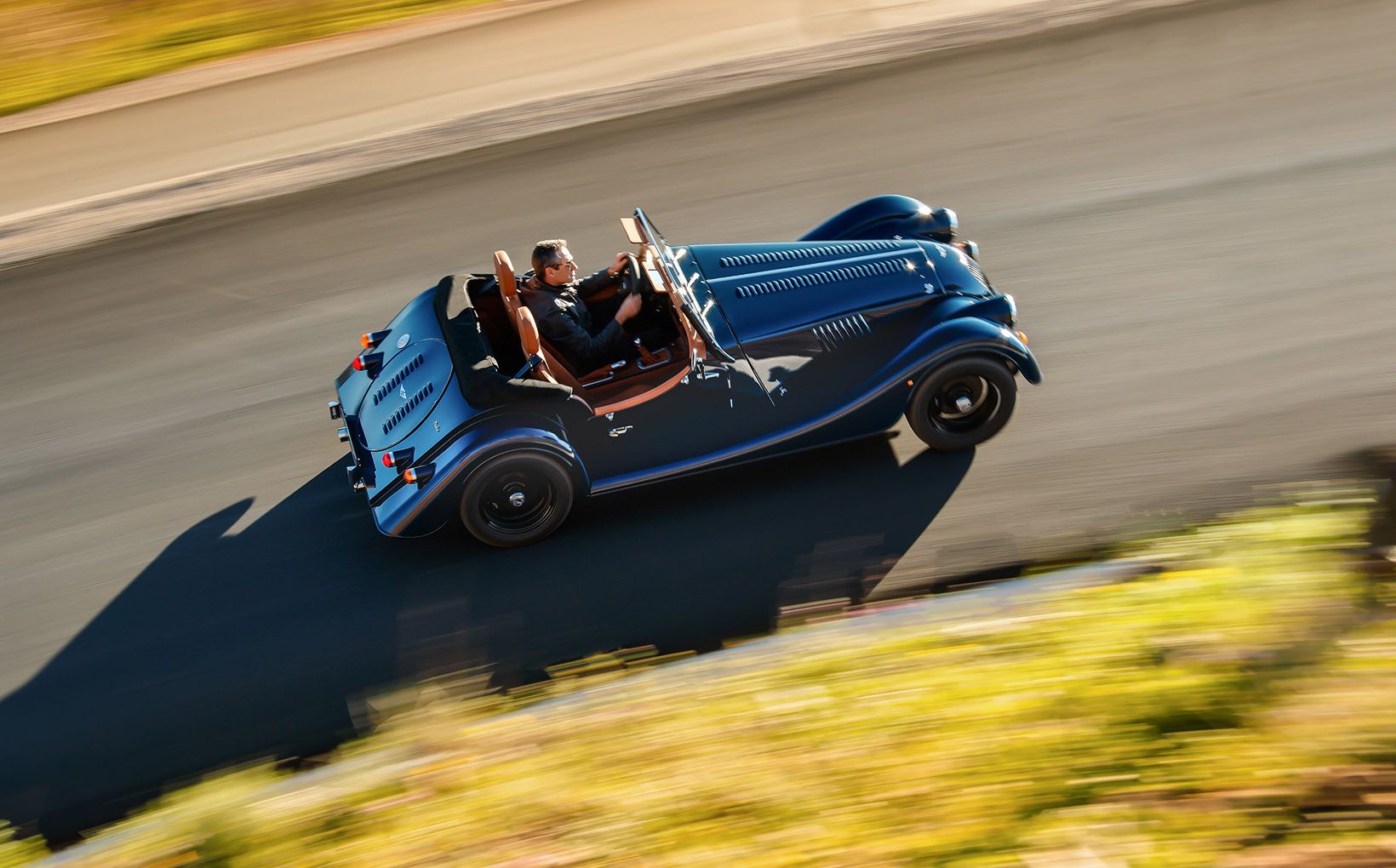 Long bonnet, exaggerated cab-backwards styling, ash wood body construction… this is classic Morgan essence that should never be messed with.

These, as well as the flagship Plus 8, were essentially built the same way, with a wooden body structure sitting on a steel chassis.

Over the years, powertrains were supplied by Coventry Climax, then Standard/Triumph, Rover, Fiat and Ford. 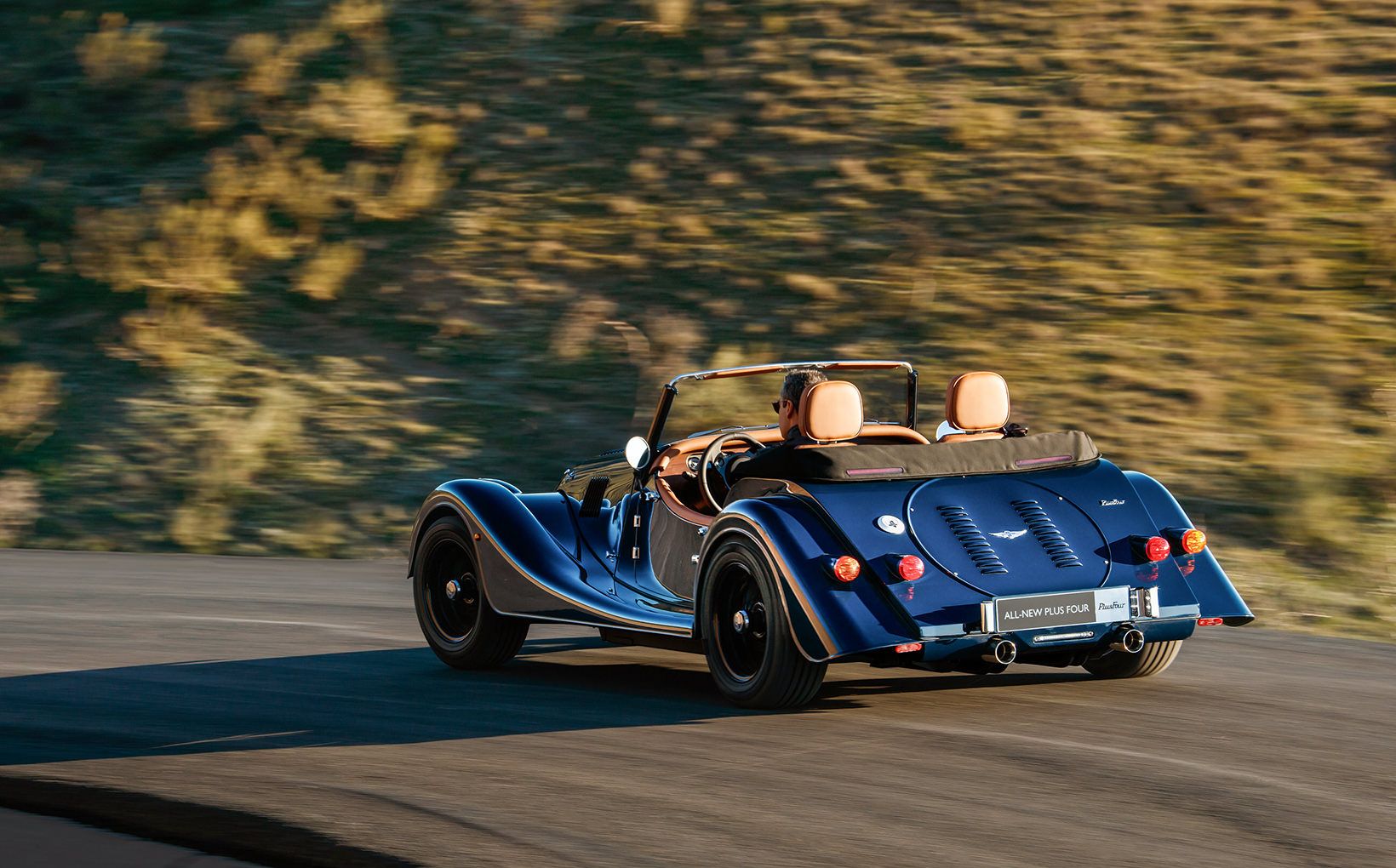 Wire wheels hide advanced double-wishbone suspension and a bonded aluminium chassis that’s massively stiffer yet much lighter than before.

Now comes the new Plus Four for 2021. Note the spelling. It certainly suggests continuity with the venerable Plus 4 line, as well as the famous Morgan design cues, from the signature arch grille and narrow body to the wide-wing, cab-backward silhouette. Why change such a revered classic look?

Yet, the newcomer is also completely different, thanks to a thorough engineering overhaul. The Malvern, Worcestershire firm states that 97 per cent of the vehicle is all-new, representing the biggest change in the series’ 70 years.

Gone are the Ford engines, replaced with the lauded B48-series 2.0-litre four-cylinder unit with turbocharging (a first in a Morgan) from BMW, as per the latest M135i hot hatch, but driving the rear wheels via a six-speed manual gearbox or ZF’s brilliant eight-speed torque-converter automatic transmission (with paddle shifters, naturally). 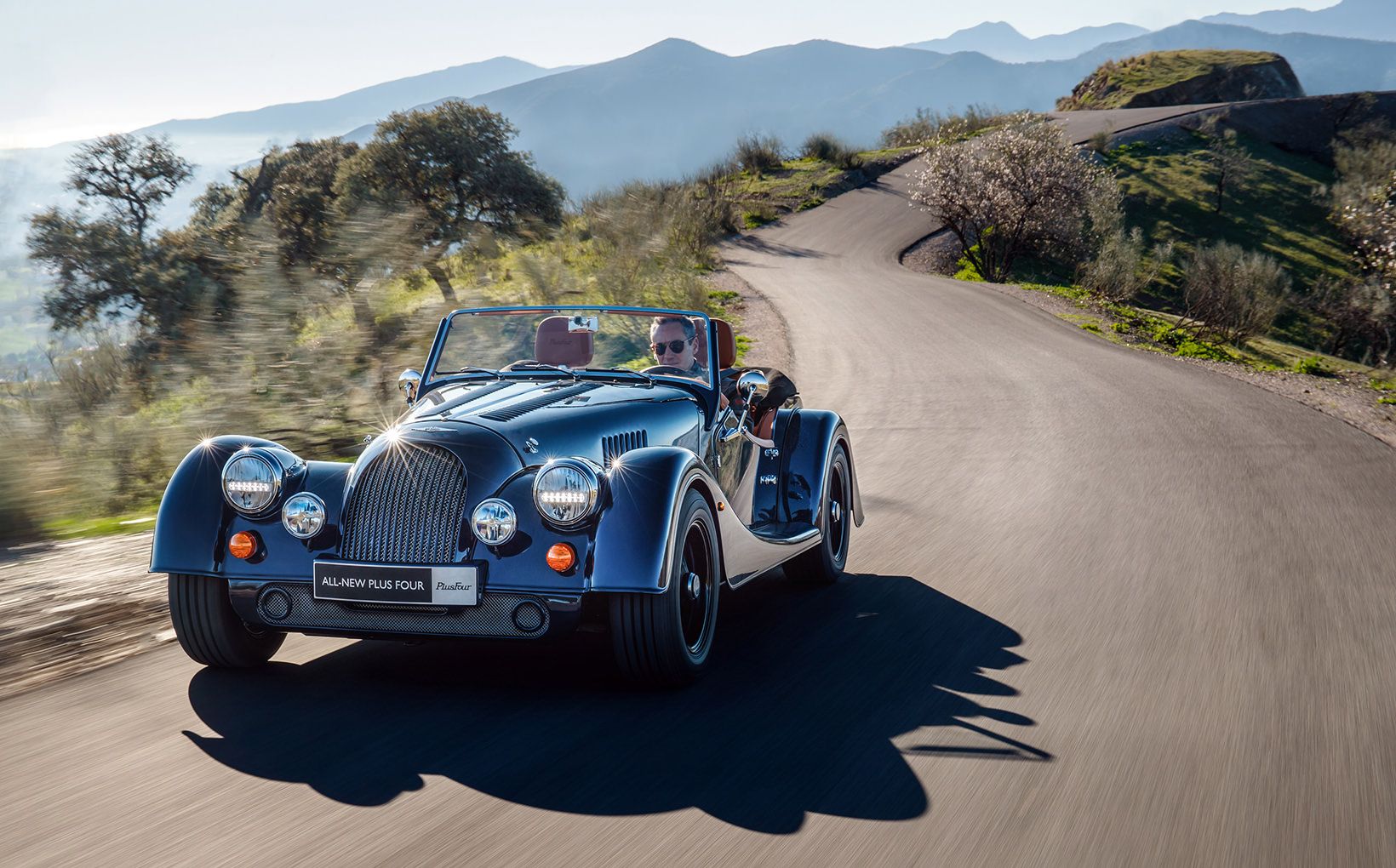 Environmentally more responsible, the Plus Four’s CO2 output is significantly lower than the outgoing model, despite a 65 per cent boost in power and torque.

Detuned slightly for the iconic British two-seater roadster, the Plus Four’s B48 delivers 190kW of power and either 350Nm or 400Nm of torque depending on whether it’s manual or auto, for a 0-100km/h sprint time of 5.2 or 4.8 seconds respectively, on the way to a top speed of 240km/h. We’re talking Porsche Boxster performance here.

Then there’s the Plus Four’s chassis, which ditches steel for the CX-Generation bonded aluminium platform as seen in the Plus Six revealed in 2019. 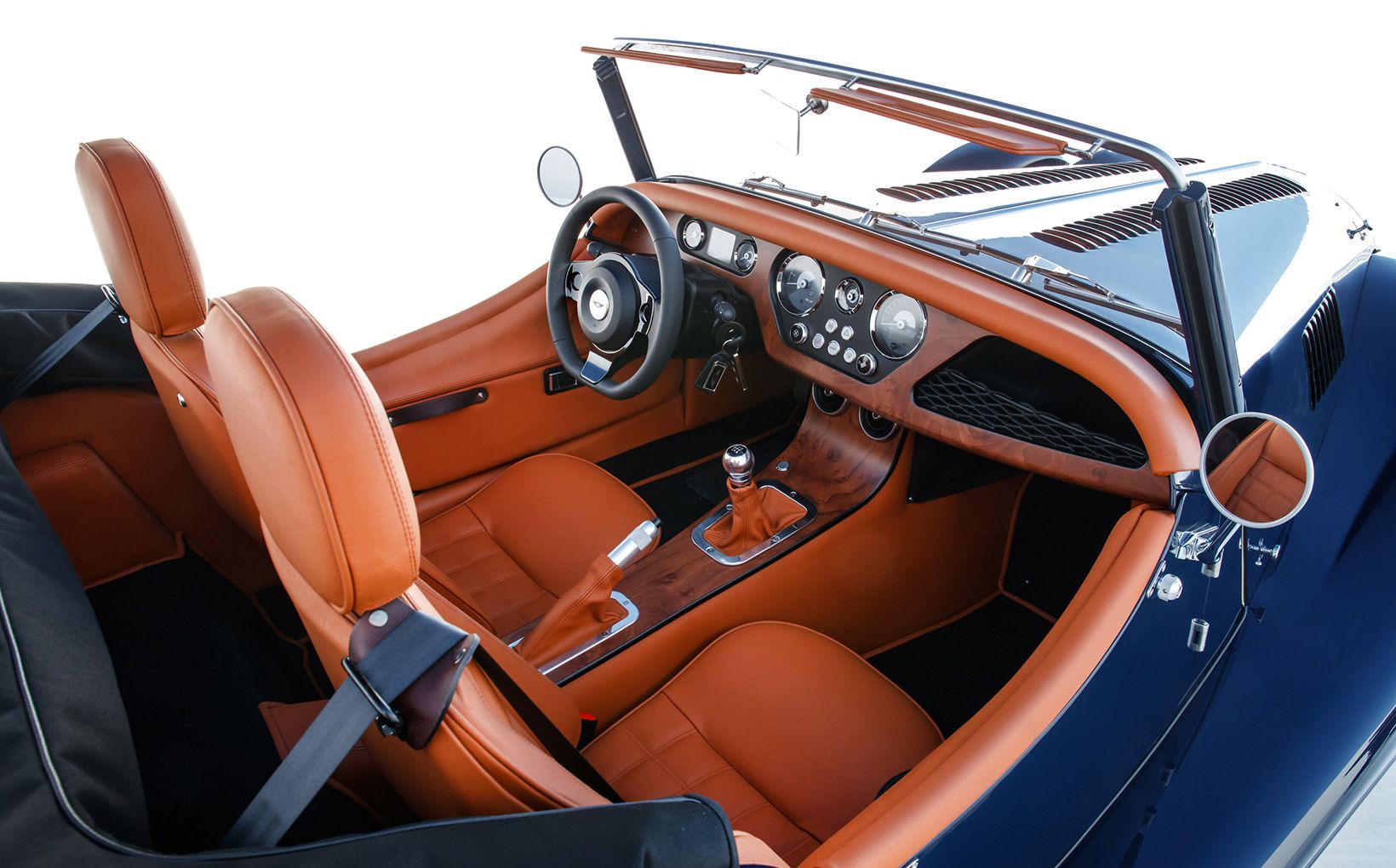 Behind the modern steering wheel is a combination of classic and digital dials.

Speaking of speed, to handle all that oomph, the Plus Four scores redesigned double-wishbone suspension all round and a braking revamp.

Along with the aluminium chassis’ much greater stiffness and considerable weight loss – it tips the scales at only 97kg – the newcomer’s ride and handling capabilities are said to be transformed. 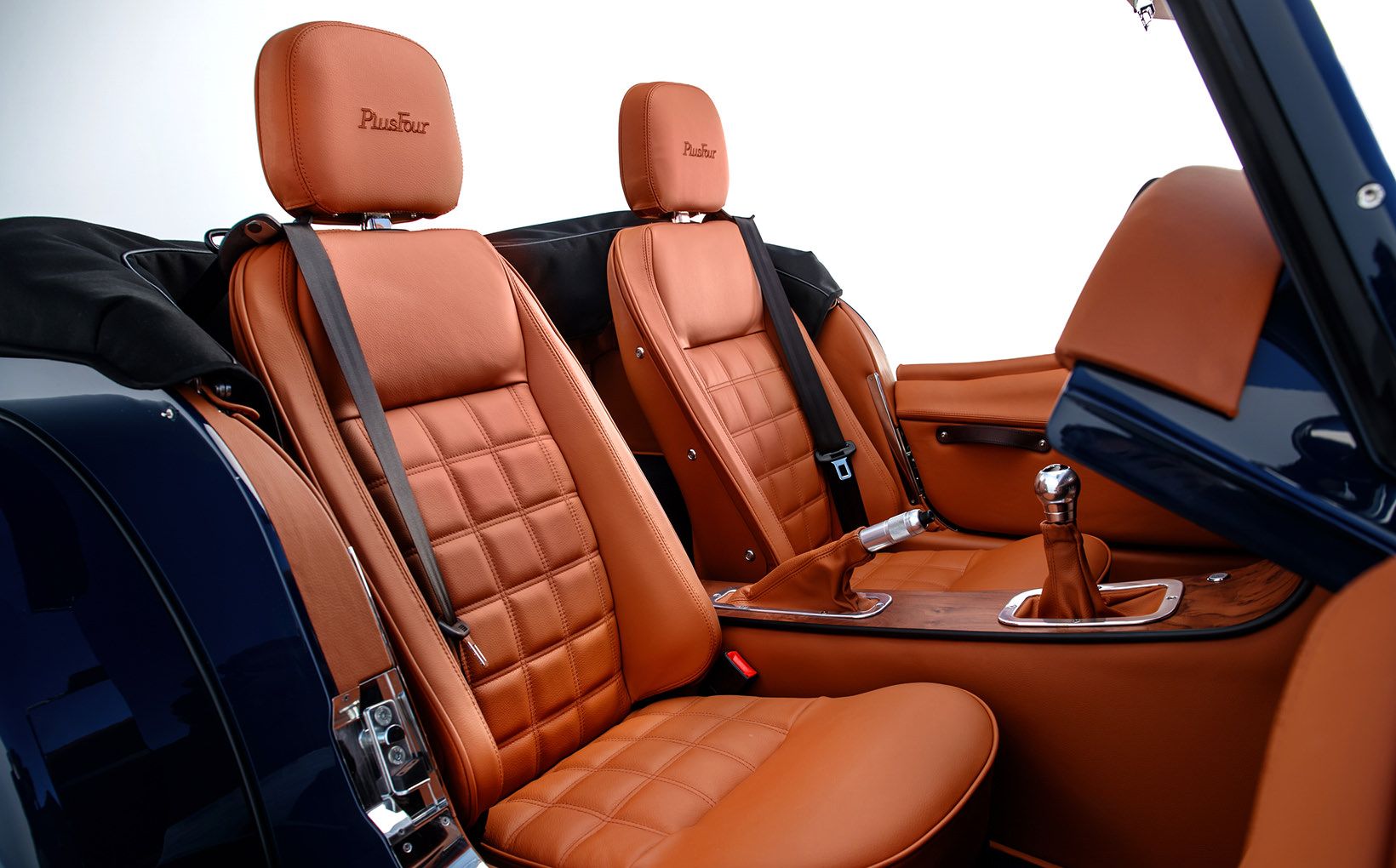 Beautiful hand-crafted natural materials are just as much a part of the Morgan’s story inside as the iconic design outside.

“It features rare craftsmanship, the instantly recognisable Morgan silhouette, and now, industry-leading technology thanks to our CX-Generation aluminium platform and BMW powertrains,” according to Morgan Motor Company chairman and CEO Steve Morris.

Some of that modern tech is also visible both on and inside the two-seater, thanks to features such as full LED lighting, digital supplementary instrumentation surrounded by traditional analogue dials, anti-lock brakes, power steering and remote central locking… we’re talking about a Morgan with a wood ash body, remember. 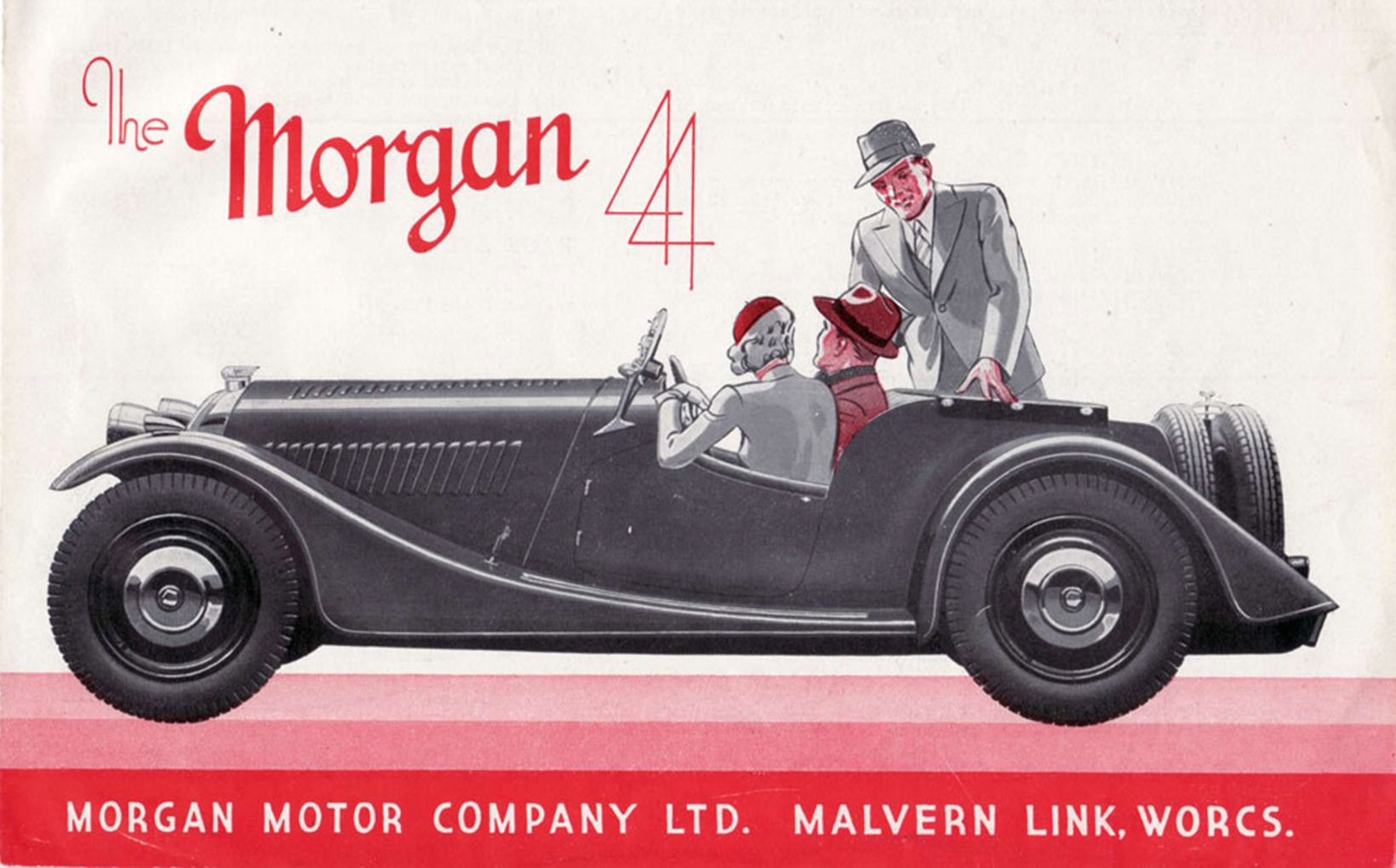 Where it all began – the 2020 Plus Four and the 1936 4/4 are very clearly related in design and to a lesser degree execution.

The company claims “one trillion” different combinations of Plus Four are possible, thanks to a myriad of options and extras, including special audio systems, Bluetooth connectivity, two-tone or pearl paint choices, a boot-lid mounted luggage rack, upgraded soft-grain leather upholstery and heated seats.

With so much progress made, the Plus Four will, inevitably, not come cheaply.

Morgan Cars Australia spokesman Chris van Wyk said that Plus Four pricing will likely rise “significantly” over its predecessor’s $105,000 plus on-road costs opening sticker, due to a higher UK-market price being set for the latest model, combined with unfavourable currency exchanges. 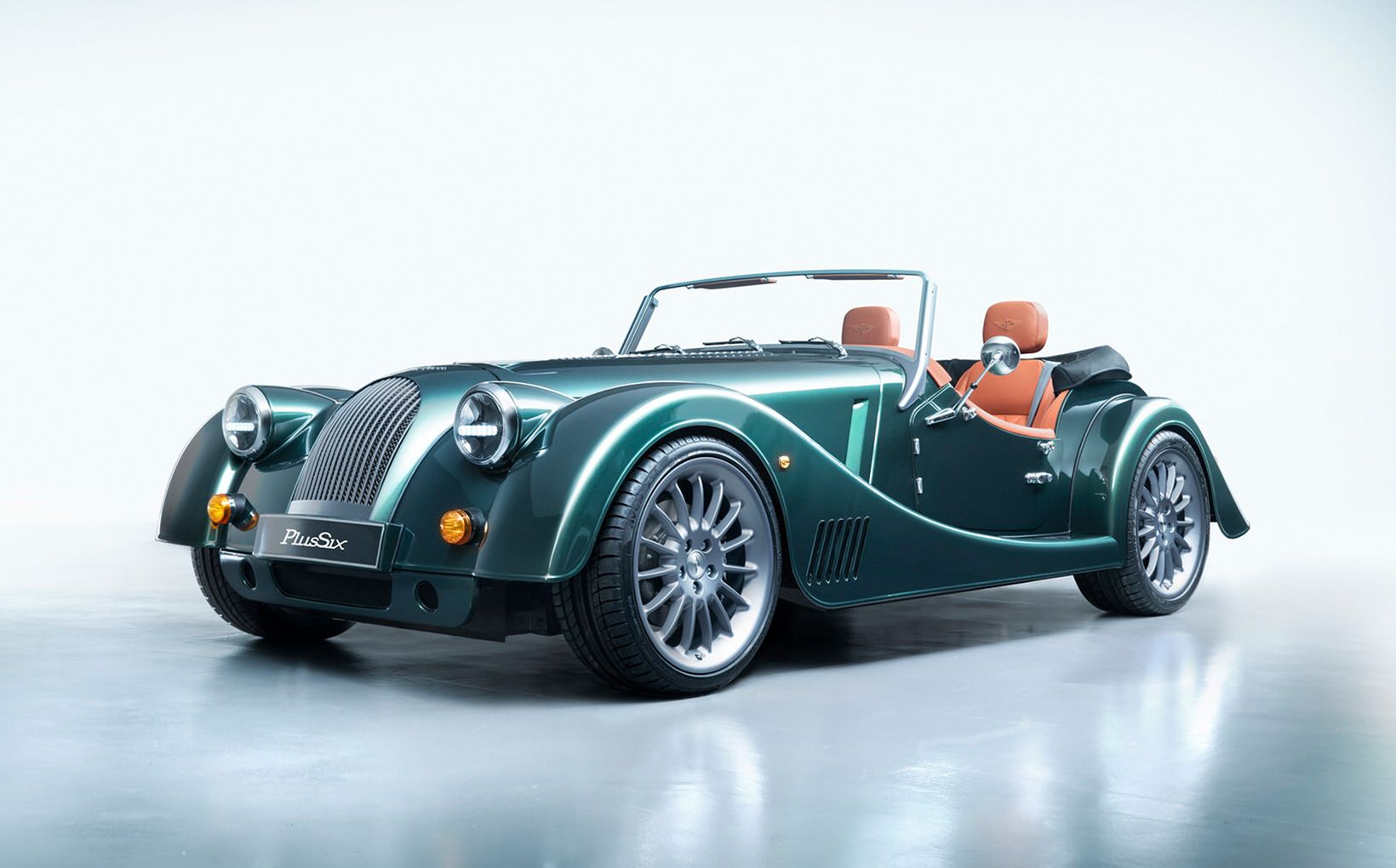 Nevertheless, the Plus Four remains a distinctly unique and very desirable confluence of old and new, a best of both worlds proposition – Morgan’s 110-year experience in making runabouts and roadsters combined with Munich’s powertrain expertise – that should it help the English marque’s fortunes grow in these difficult times.

After all, Morgan has faced challenging times and huge adversity more often than most.

Protect your Morgan. Call Shannons Insurance on 13 46 46 to get a quote today.