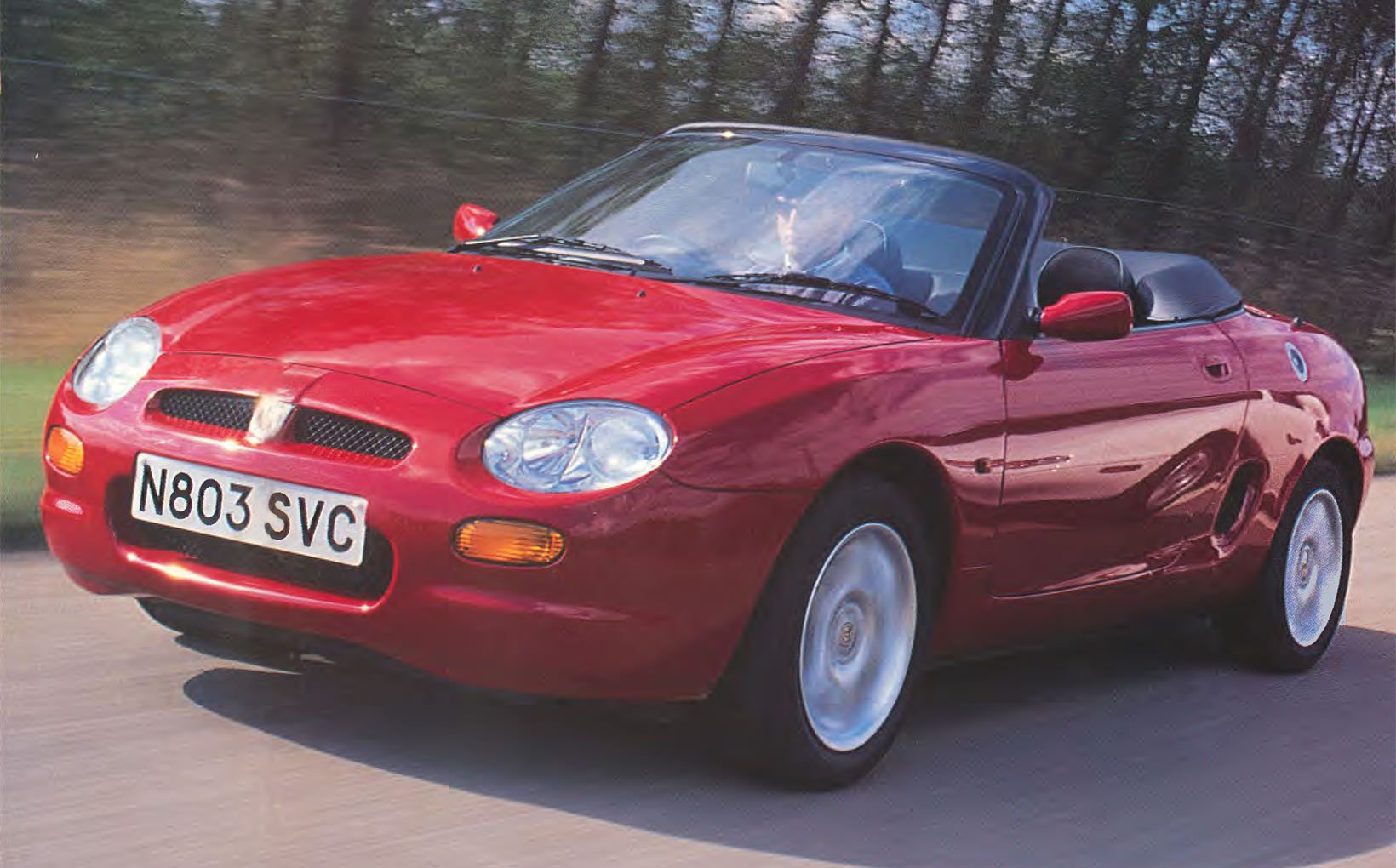 How many car makers would kill for the right to put an MG badge on their cars?

Don't misunderstand me; it would not be done to honour a great name. Quite the reverse in fact. Car manufacturers would love the MG name because, offhand, I cannot think of another more successful at selling really terrible cars.

How is it that, after the B, the Midget and then the Metro, Maestro, Montego and RV8, that this name has not only survived but remains capable of reducing normally sane people to damp-eyed nostalgia at its very mention? Beats me.

Nevertheless, I have wondered for several years what would happen if, by some mirade, the MG octagon found itself on the prow of a genuinely good and all-new car, an event so rare in the company's history that rock n' roll was still a twinkling in Bill Haley's eye the last time it happened.

The wait is over, the miracle is at hand. In an inspired flash of design genius and engineering flair damped only by an overdeveloped notion of common sense, Rover has produced the MGF, the first all new MG for a generation. 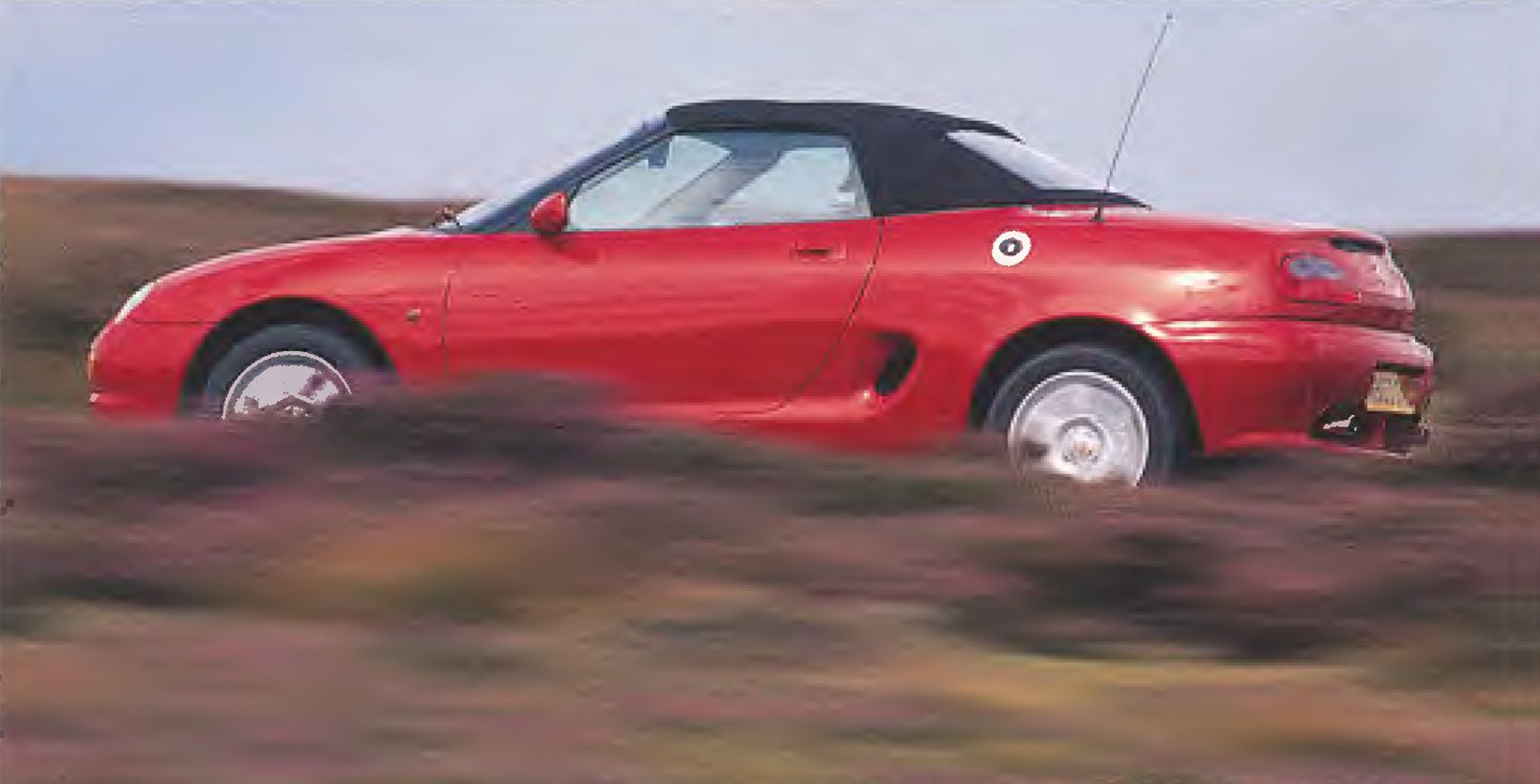 You've seen it in the photographs and you'll just have to believe me that it looks even better in the metal for the first time. The MG has found the shape to make the MX-5 look a little dated. It's at its most beautiful in the rear-view minor of the car it's following. There is, truly, not a bad line on it, even with the roof up.

This itself should come as no great surprise. What indigenous car industry that has been left to the Brits is now largely made up of companies selling attractive two-seater sports cars. Yet by no means all manage equal beauty beneath the skin.

The MG does. This is, in all probability, the best-built affordable open two-seater ever built, not simply in Britain or Europe, but the world. Stand one next to its Mazda rival and you'll see its paint is more lustrous, its panel gaps tighter. Drive it down the road and you'll be left in no doubt as to which is more rigid.

And while the MX-S's looks and mechanical layout are '60s-style, the MGF is entirely a '90s child. A transverse midengined layout has not only certain dynamic advantages but also contributes to styling and packaging. Given its two-seat limitations, the MGF is exceptionally spacious, accommodating the legs of the tallest with ease while still finding space for a well shaped and decent sized boot behind the engine.

In fact, raise the cute rear of the MG and you'll have a job finding the engine at all. Peer into the midst of the car, lift a flap and search past the oil filter and you'll eventually see the latest incarnation of Rover's acclaimed twin cam, 16v, K-series engine. Having been bored and stroked from its original 1.4 litre capacity, it now displaces 1.8 litres regardless of whether you specify your car in the standard tune seen here or with rather more racy variable valve tinting.

The output of the stock engine is unremarkable - just 88kW generated at a ho-hum 5500rpm - though the solid 166Nm of torque at 3000rpm gives a better clue to the nature of the engine's performance.

Bear in mind also that, despite its considerably larger dimensions and more substantial structure, the engineers at Rover have done well to keep flab off the flanks of the MG, bringing the car to the weighbridge at 1073kg, no more than 50kg over the equivalent Mazda. The result is a car that's acceptably if not electrifyingly swift. If you know how to deploy the extra traction brought by the mid-engined layout, you can squeal even this stock MGF to l00km/h in around 8.8sec, through the standing kilometre in 30.2sec and on to 198km/h all out. 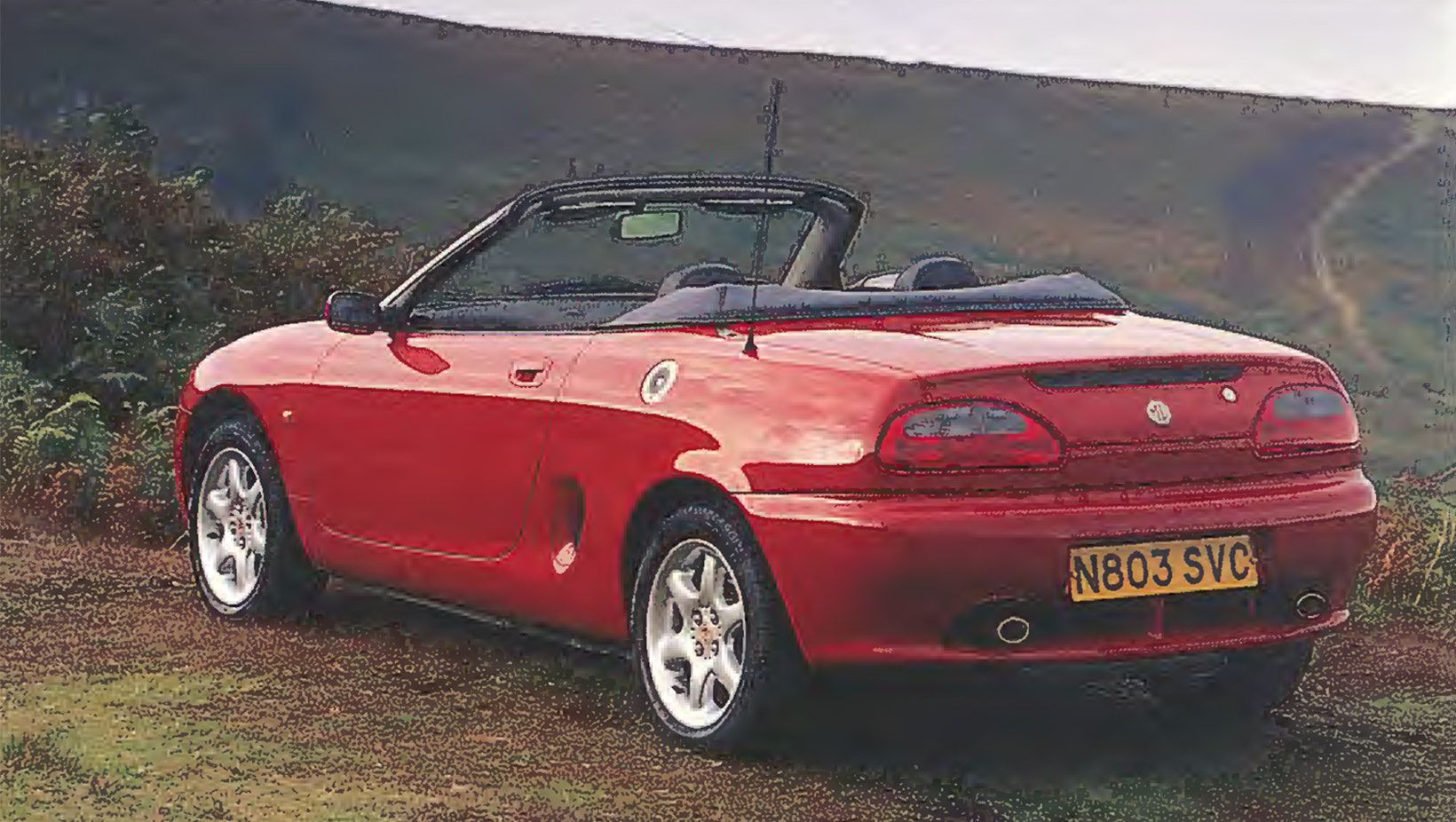 These figures, recorded on a scarcely run-in car, not only beat Rover's own claims but also augur well for the performance of the 107kW VVC engine, slated to crack l00km/h in 7.0sec and reach 210km/h all out.

Yet there is a problem here. Fast though the MG is, it doesn't feel it. Its performance is delivered with such little drama and so little fuss, the biggest in-cockpit action is the upward sweep of the speedo needle. While such a smooth nature would be congratulated in a luxury sedan, in an open two-seater it is misplaced. Even traditional MG buyers, not exactly renowned for their sense of adventure, are going to want a little more excitement than this. The engine sounds good but is too quiet and is rather more keen to provide low-rev flexibility than searing response near the redline, painted at an unnecessarily high 6800rpm. It is to be hoped that with variable valve timing and maximum power arriving at 7000rpm, not 5500rpm, the engine will feel a deal less laid back.

But even if it does, there is nothing that VVC will do for the MGF's handling as the chassis spec for both cars is identical.

The MGF's handling is extraordinary. You approach your first tight tum with your mind full of thoughts of the only other affordable mid-engine car around, the Toyota MR2, and of the tail-first excursions into the undergrowth suffered by careless drivers who have got on the wrong side of its inherently low polar moment of inertia. 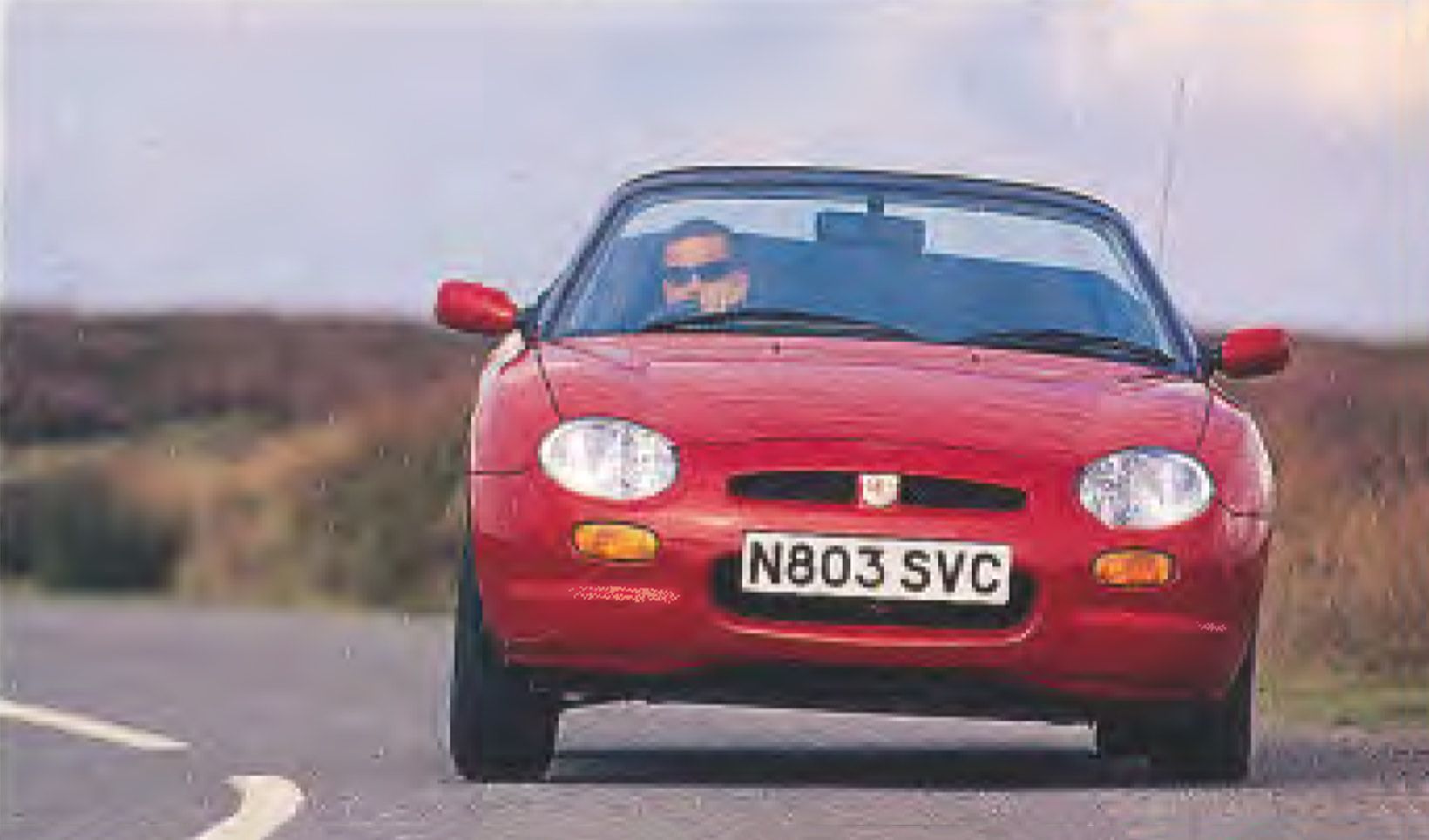 So you take it easy first time and discover no more than the MG has huge grip, beyond even what you'd expect from its 185/ 55 front and 205/50 rear tyres. Then you remember these are controlled by double unequal length wishbones and interactive Hydragas springs and you find the confidence to try harder.

The steering, with optional speed-sensitive electric power steering on the test car, feels odd at first. There are too many turns across the poor lock (about 3.4) and it feels a shade too light around town and artificially heavy at speed. Even so, it's a precise system, with reasonable feel and there are no qualms about turning the MG into the next comer with considerably more gusto.

Again it grips but, this time, as you power away from the apex you feel the steering lighten a touch, obliging you to apply more lock to prevent the nose from leaving your chosen line. Yet still you're off course so you have no choice but to lift off the throttle, preparing for the usual no-nonsense reply that such an action produces from mid-engined cars.

Not this one. There's no snap, no bite; all that happens is the nose tucks back into line and you're powering down the straight wondering what didn't happen.

This is good and bad. On the one hand, Rover is to be congratulated for creating the safest handling mid-engined car in the world. Most supermarket trolleys require more skill. 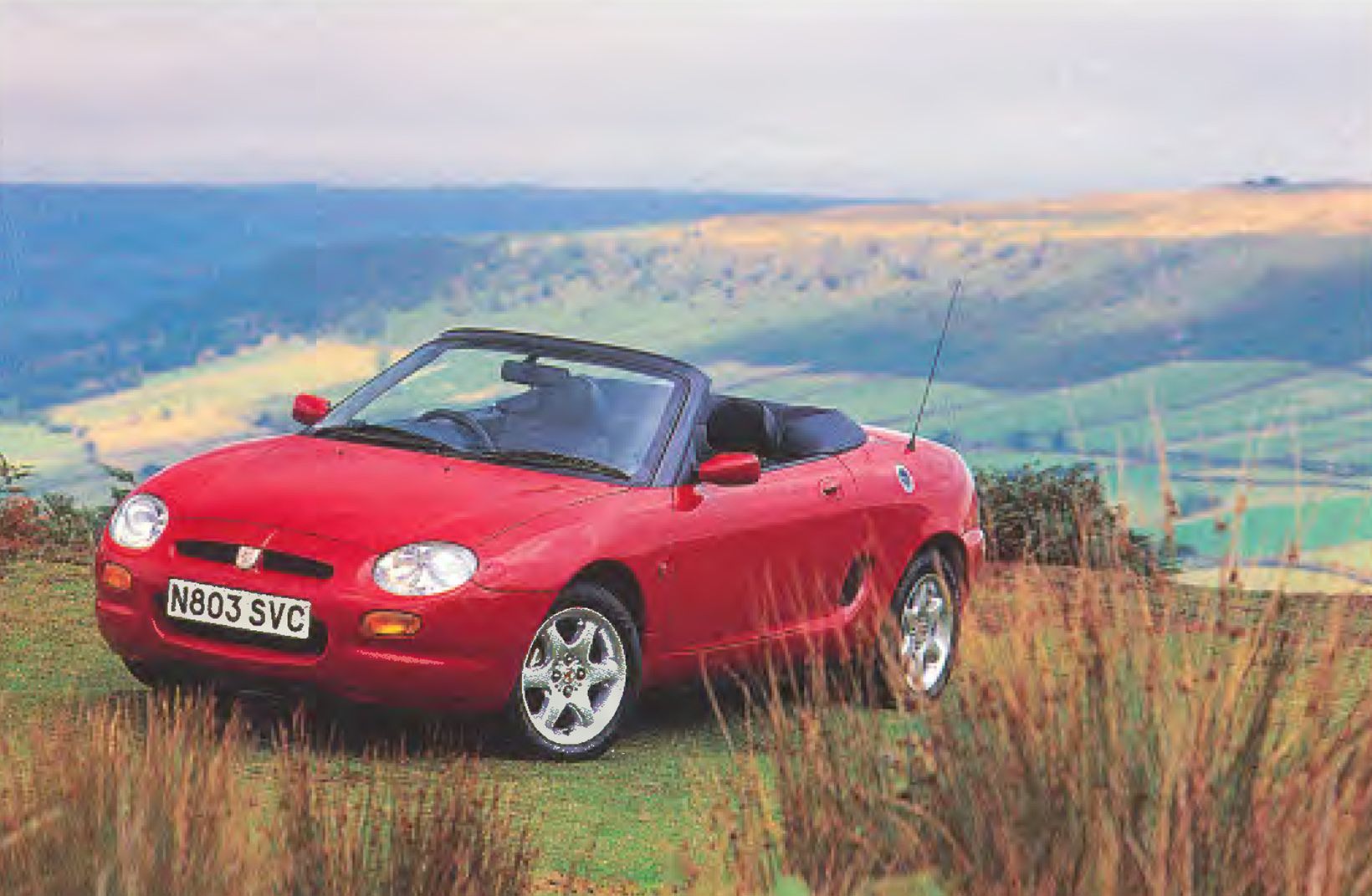 We took it to a race track, spent all day trying to find its dark side and failed miserably. In over 200 laps at race speed, it oversteered once and then only by flicking it the wrong way, standing on the brakes and then the power while already on the limit through a chicane.

The flip side of this is worrying. Try as I might, I could not enjoy myself in the MGF. There seemed so little to do. The driver is required to do no more than hand over a set of instructions in a sealed envelope, which the MG would then execute to the letter without further need even for consultation, let alone involvement. It is a car which offers nothing to those enthusiasts with even rudimentary fast car skills to exercise, let alone those who want to be challenged and enthralled. To the MG, throttle-steer is a rather quaint old concept. Its dynamics subscribe to a different creed, one of peerless body control, point- to-point speed and amazing brakes. The MG is a complete car and, coming from a marque fabled for dynamic inadequacy, this is cause alone to celebrate.

That it is good looking, beautifully built and well priced is further reason why the MG deserves respect. But any relationship is a two-way street. I felt no more inclined to become involved with it than it felt inclined to involve me. 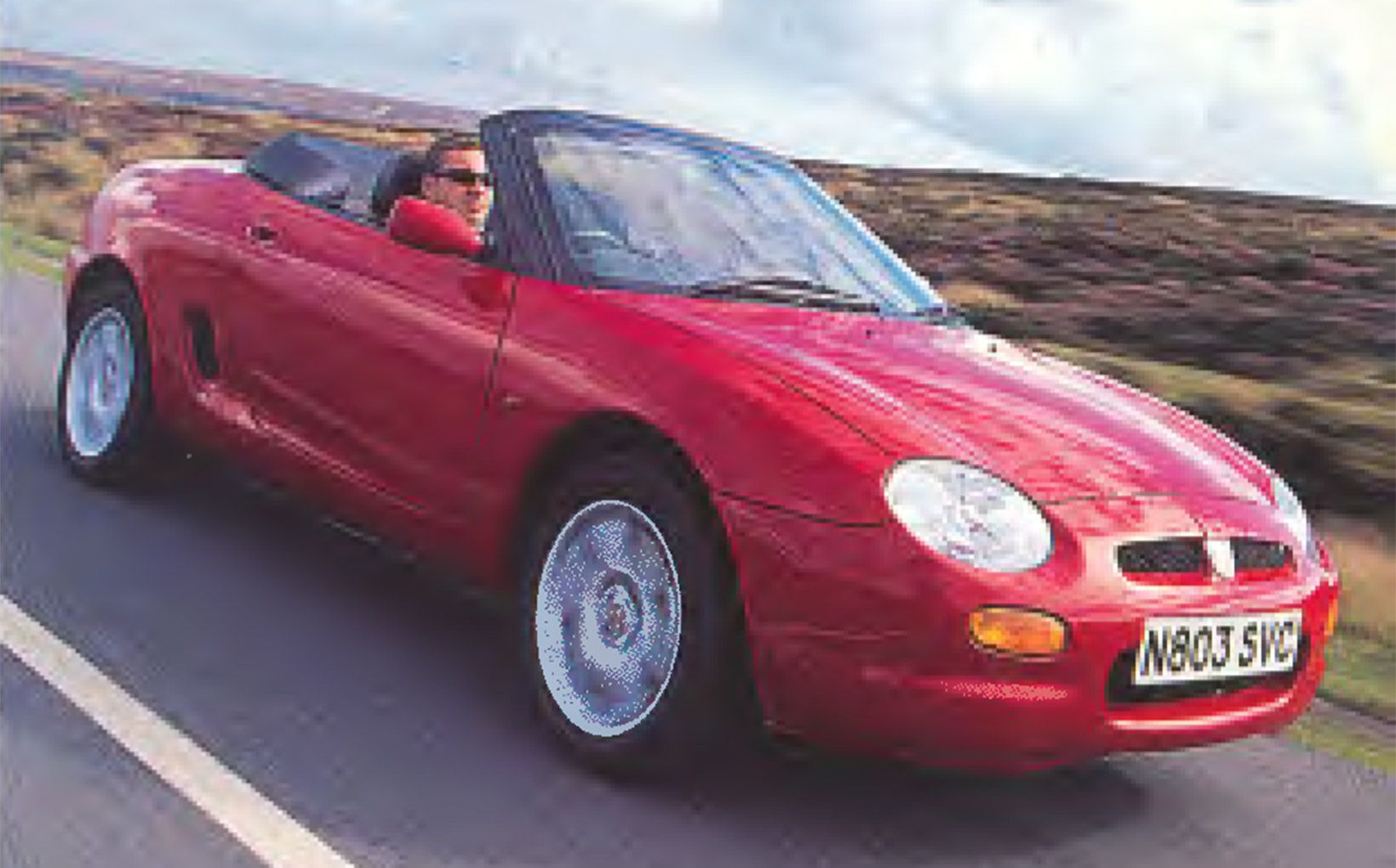