It is certainly no secret that large, luxurious four-door sedans are something of a speciality for Mercedes-Benz, with the German marque building its reputation over decades on such a body style.

The current-day S-Class and E-Class represent flagship models for Mercedes, and for years their predecessors been among the most luxurious and desirable vehicles on the market, representing wealth and status for whomever was behind the wheel or even in the back seat being driven by their chauffeur.

However, to quote Bob Dylan, the times they are a-changin’, and Mercedes seems to be moving too. We are of course talking about the electric revolution, with internal-combustion engines and multi-geared transmissions slowly making way for electric motors and battery packs. 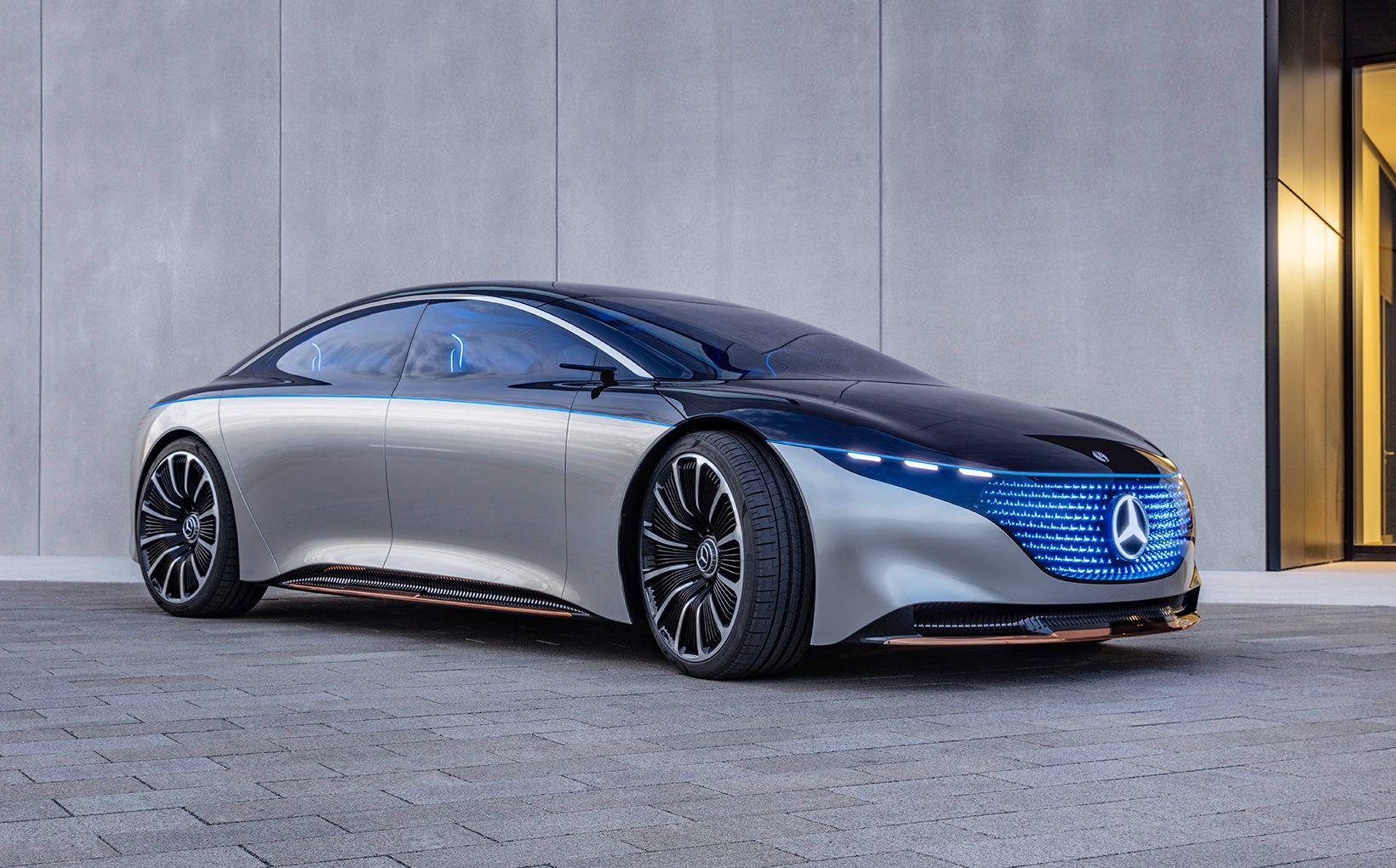 Enter the Vision EQS. Revealed at the Frankfurt motor show in Mercedes’ home territory, the Vision EQS is the latest all-electric concept from the brand, and previews a production version due for release in 2021.

The EQS will take pride of place atop Mercedes’ all-electric EQ range which will include the likes of the soon-to-be-released EQC SUV, EQV people-mover and EQA hatch, among others.

Of current models, the most obvious competitor for the production EQS would be the Tesla Model S, but Mercedes seems to be spearheading the movement towards luxurious and opulent electric models to compete with the likes of the next-generation Jaguar XJ which is confirmed to go down the zero-emissions route. 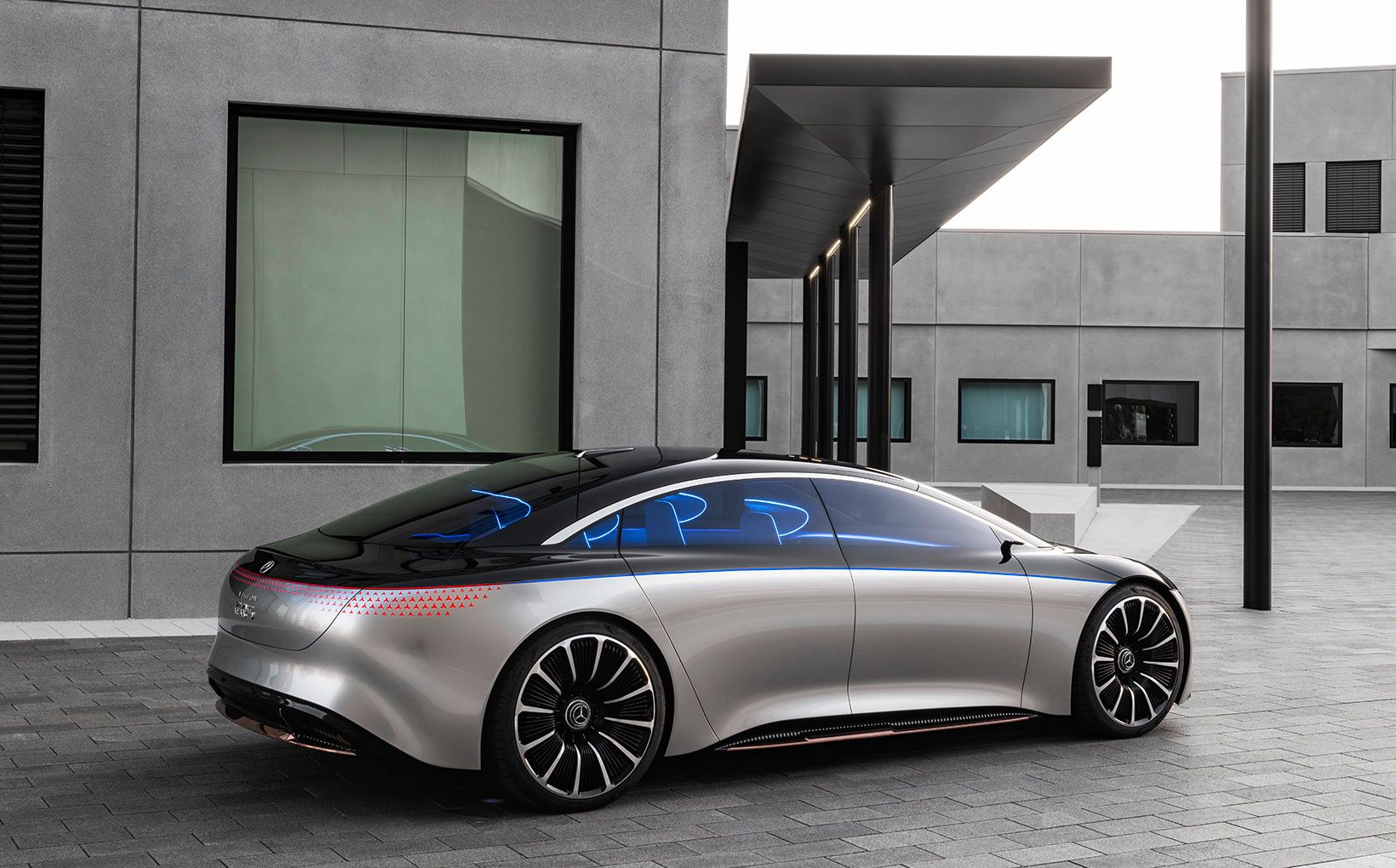 Sleek lines and a two-tone paint job are fast becoming hallmarks of electric concepts from Benz.

According to Mercedes, the EV platform underpinning the EQS is “completely new, fully variable … (and) in many respects scalable and useable on a cross-model basis”, with the ability to be used for “a wide range of different vehicle concepts”.

This means the platform can be used for other applications, such as a super-luxury Maybach version that will go head-to-head with future all-electric models from high-end manufacturers such as Rolls-Royce, Bentley and Lagonda, while showcasing new designs and technological innovations from Mercedes.

The platform is constructed from a mix of steel, aluminium and carbon-fibre, with elements of recycled materials, thus ticking engineering boxes that require lightweight construction, strength, cost efficiency and sustainability.

The powertrain in the Vision EQS will feature more than 350kW of power and up to 700km of driving range on the WLTP cycle.

As for the all-electric powertrain, Benz is yet to reveal concrete details for the Vision EQS’ propulsion, but a pair of electric motors will be mounted on the front and rear axles for all-wheel drive and variable torque distribution.

Power is drawn from a 100kWh lithium-ion battery – sourced by subsidiary Accumotive – which is packaged under the vehicle floor and between the axles for greater packaging and a low centre of gravity.

According to Mercedes, more than 350kW of power is on tap to go with around 760Nm of instantly available torque, allowing the hefty Vision EQS to sprint from standstill to 100km/h in under 4.5 seconds, on the way to a 200km/h-plus V-max.

188 individual LED lights make up the front grille, which Mercedes believes will help to better communicate with other road users.

The brand is claiming up to 700km of driving range based on the WLTP testing protocol, and when using a 350kW DC rapid charger, the battery can be charged to 80 per cent in under 20 minutes.

Design-wise, Mercedes said the Vision EQS previews the design of future EQ models with an overall style the brand calls “dramatic fluidity”, with the visual link between the EQA, EQC and EQV clear.

The front grille has been replaced by an all-digital screen featuring a black panel LED matrix with 188 individual LEDs that Mercedes says “provides a new level in precise signalling”, while the headlights consist of two holographic lens models. The tail-lights are made of 229 star-shaped lights forming a belt spanning the width of the car’s rear. Futuristic, indeed. 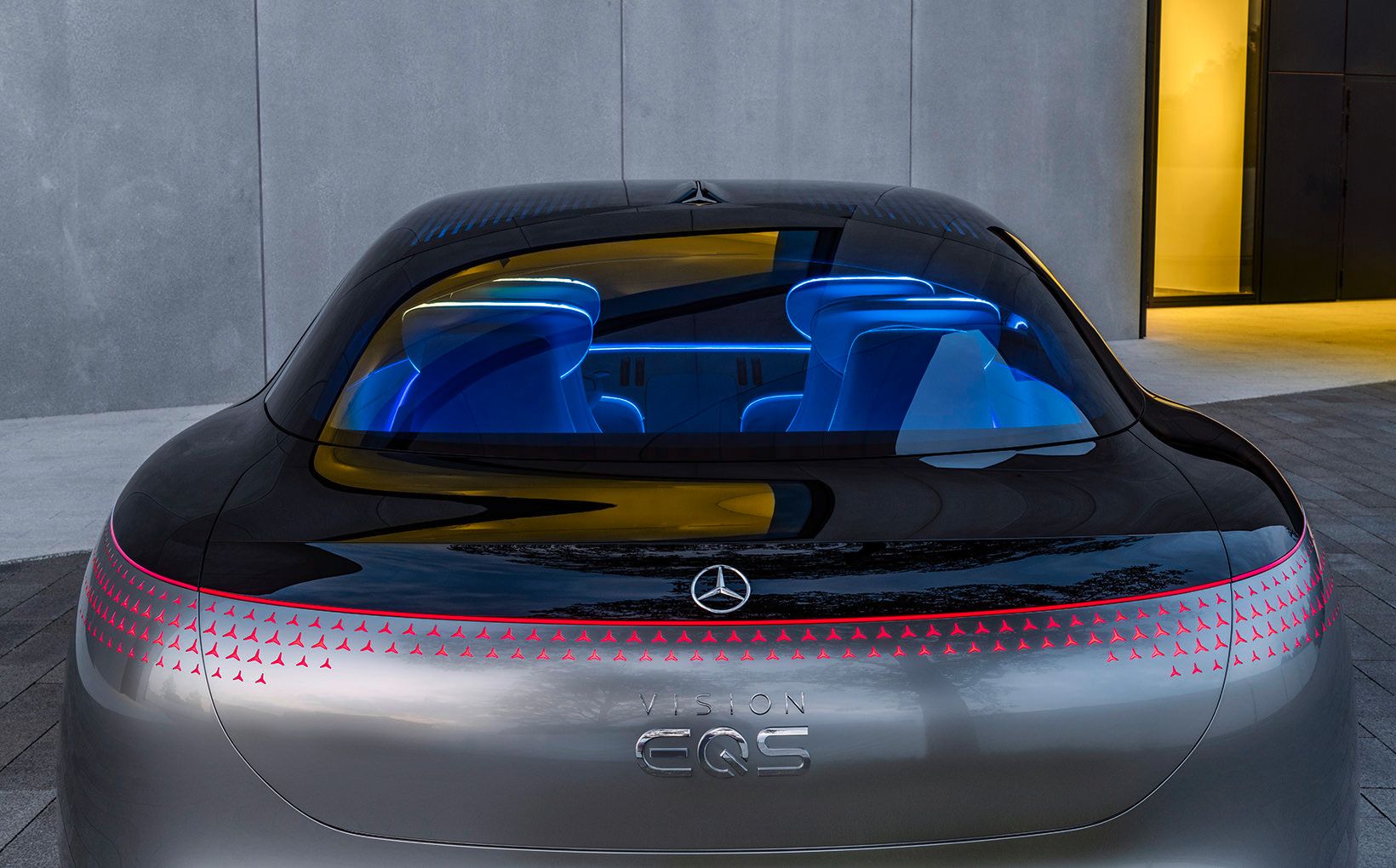 The tail-light cluster comprises 229 star-shaped lights that give the Vision EQS an even more space-age look.

Sleek, seamless lines flow over the body from front to rear, while the huge 24-inch rims and copper-coloured splitter and side skirts give a sporty, high-performance feel. The two-tone exterior paintwork and blue-light front grille are now hallmarks of Vision EQ design language.

Inside, the electric platform has allowed for the maximum possible cabin space, with interior designers drawing inspiration from luxury yachts in the hopes of enveloping occupants as if they are on the deck of a boat.

Tying into the yacht theme while promoting sustainability, the textile in the roof lining includes an unspecified amount of plastic salvaged from ocean waste – a first on a Mercedes in such a prominent position. 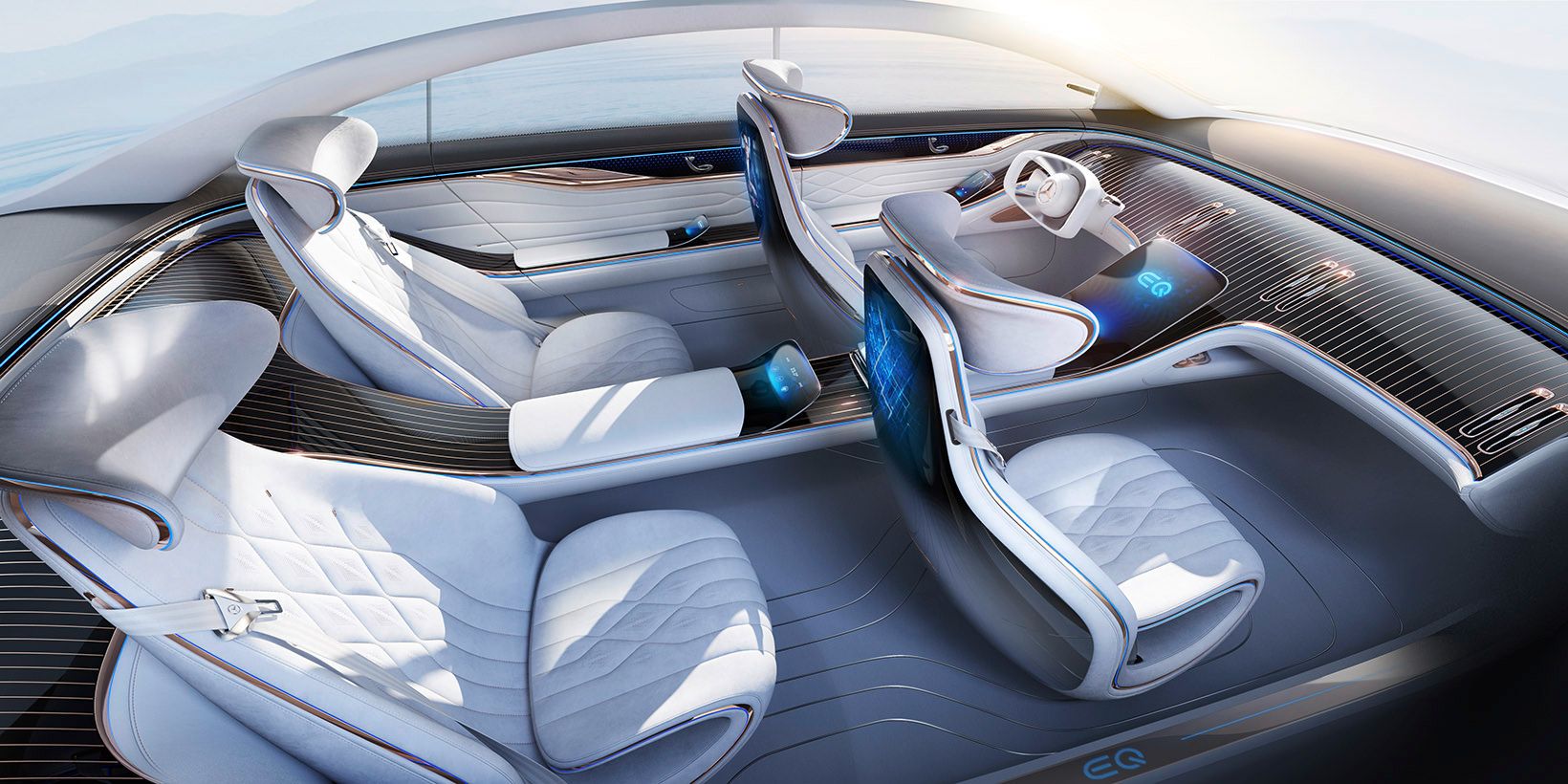 Befitting its luxury status, the interior of the Vision EQS was inspired by high-end yachts while using recycled ocean waste in the headliner.

The seating layout of the EQS consists of four captain’s chairs with a central table-like structure separating left from right, while a more advanced version of Mercedes’ MBUX infotainment system is employed up front.

As mentioned earlier, the Vision EQS is the latest in a line of Mercedes all-electric concept vehicles that started at the 2016 Paris motor show with the Generation EQ concept that acted as a precursor for the production EQC SUV that is set to hit Australian shores before the end of the year.

This was followed by the Concept EQA small hatch at Frankfurt two years ago, an EV take on the A-Class which is yet to be seen in production guise. 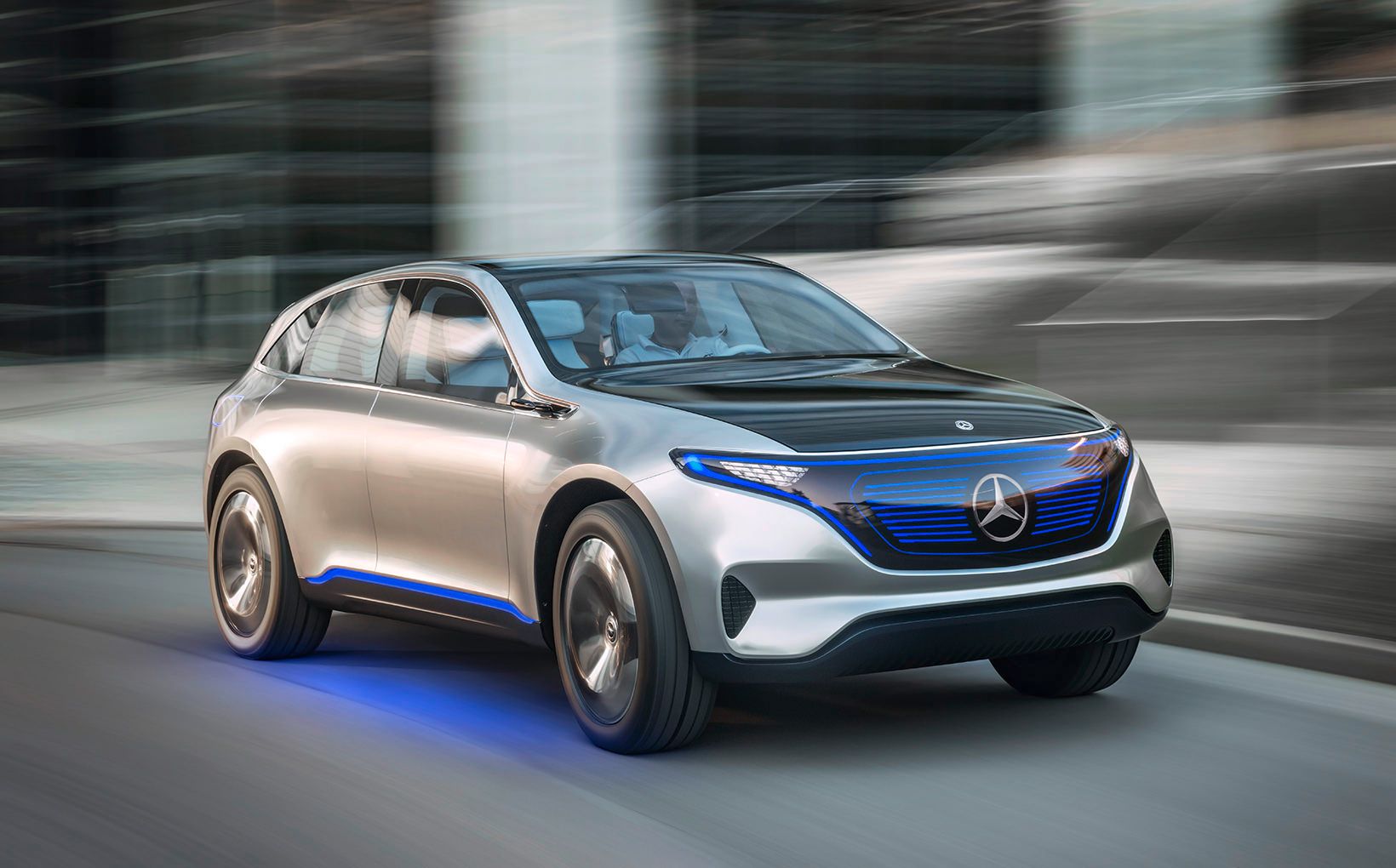 The 2016 Generation EQ marked the first all-electric concept from the EQ family of vehicles, and was the precursor to the GLC-based EQC electric SUV.

Families can also enjoy zero-emissions motoring with the Concept EQV revealed in March, which in August was revealed in production guise boasting 405km of range from its 150kW/362Nm electric motor and 90kWh lithium-ion battery.

However, no timeline has been given for an Australian arrival, despite Mercedes/Benz Vans Australia/Pacific claiming there would be interest here for the EV MPV.

While the EV revolution has already begun at the more affordable end of the market, vehicles such as the Vision EQS show that the more well-heeled members of society will also be making the switch to green motoring before long.

Protect your Mercedes-Benz. Call Shannons Insurance on 13 46 46 to get a quote today.