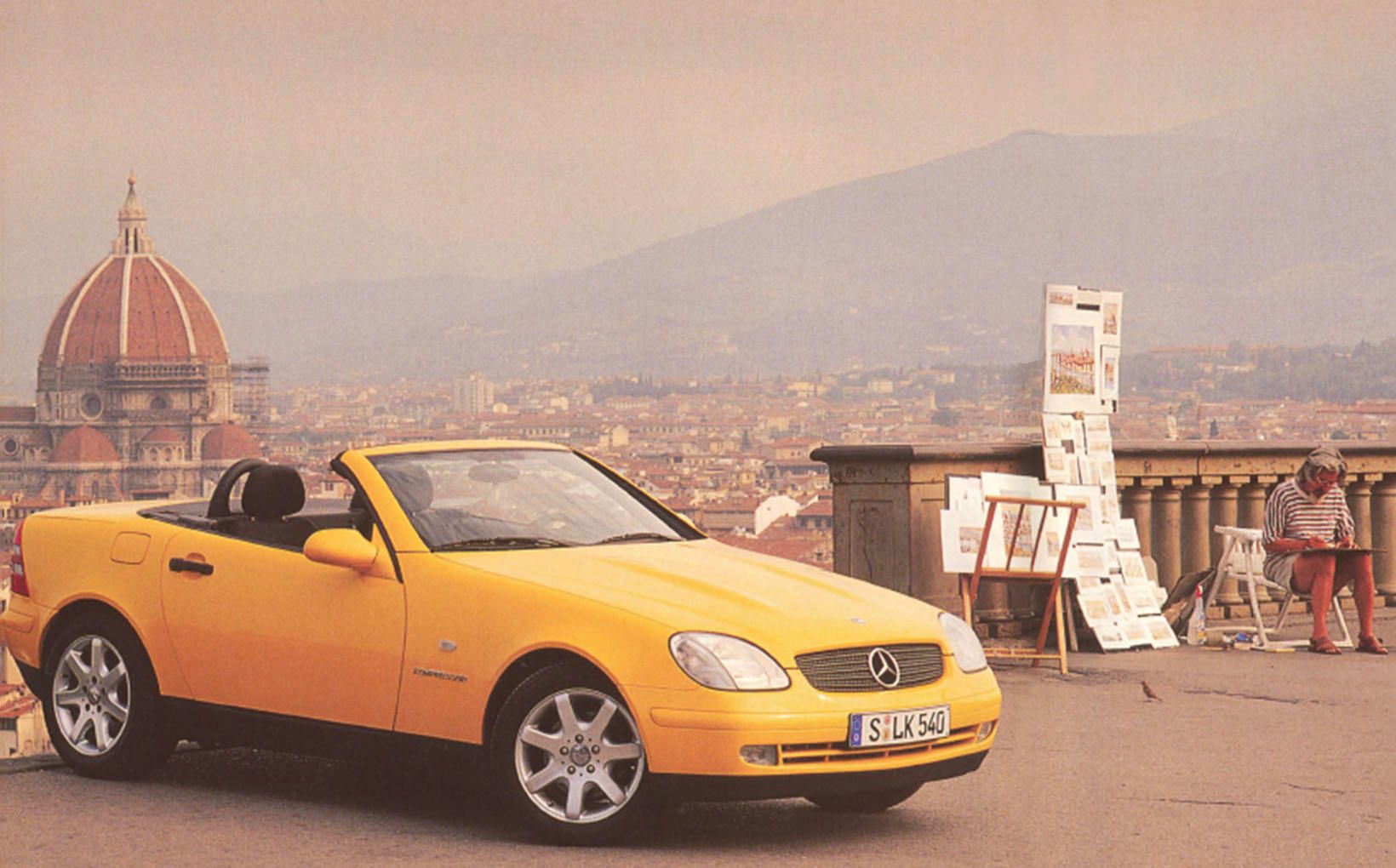 The remarkable new Mercedes-Benz SLK is three cars in one in a way no other car, ever, has come close to emulating. There's no doubt, its most public role is as relaxed wind-in-the-hair poseur's roadster; 25 seconds later, via a densely technical engineering miracle, it converts to an autobahn express, a true coupe; or, open and closed, it can be a quick handling sports car.

And the 2.3 Kompressor automatic, the only version to be sold in Australia for at least a year, is fun to drive. Not just because of its trio of personalities, though this is fundamental to the car's enormous appeal. Neither is it fun in the way a Mazda MX-5 is a delightful plaything. No, the SLK is fun because it looks terrific, handles and rides exquisitely, and performs strongly enough, at least in supercharged form, to be taken seriously.

You are going to love it 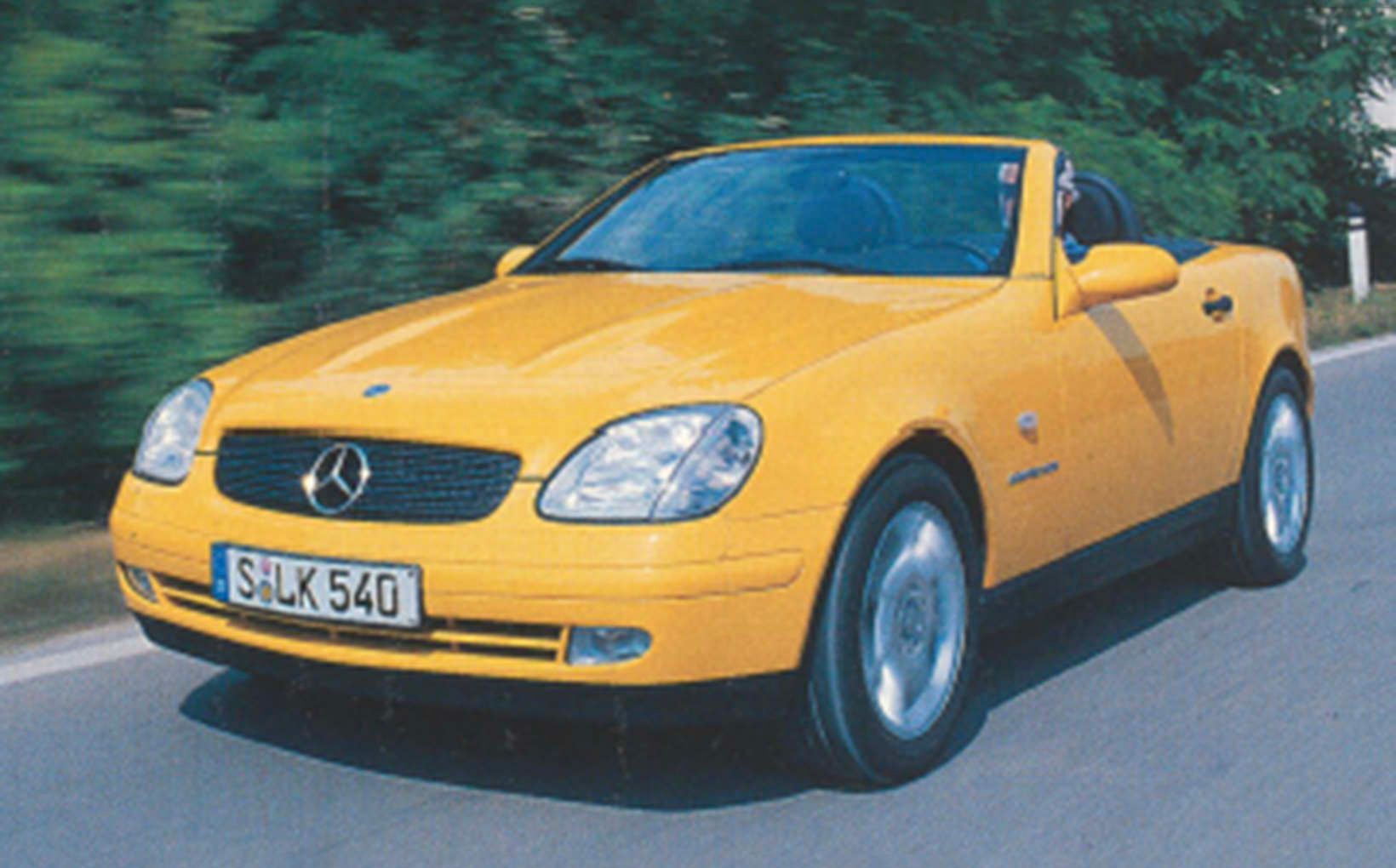 The SLK is closer in character to being a baby SL than even Stuttgart is prepared to admit. There is the same attention to detail, the unrivalled build quality, the common intention to make sports car ownership totally painless. Not least, there is the fact that it's an investment with, almost certainly, incredibly low depreciation for the first few years,

And when potential SL buyer realise they get virtually everything the even-year-old ?? SL has to offer - plus some unique features, in a newly designed car, at a price that undercuts the far slower SL280 by a cool $100,000, I reckon demand for the big sports car will tumble. Mercedes says not; that 60 percent of the current SLK order bank is made up of conquest sales, and SL orders are holding up. We shall see. 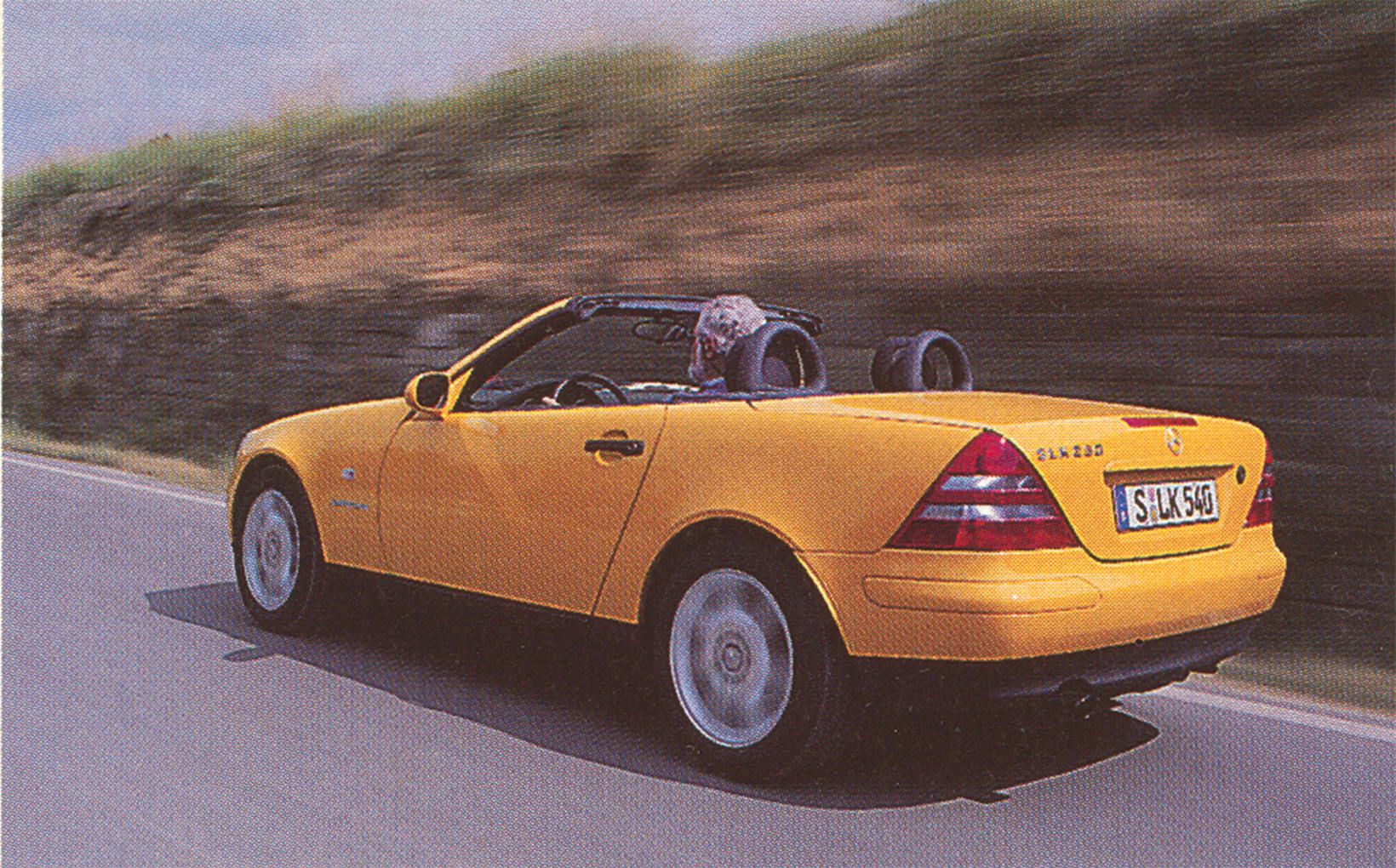 According to Mercedes, SLK stands for Sports, Light, Kompact. Sports is an appropriate word for the SLK, and compact it most certainly is, at just 3995mm long. That's close to 500mm shorter than the SL and within 45mm of the Mazda MX-5, the little Japanese roadster that started it all. But 'light' is not a word in the SLK's vocabulary. The 2.3 Kompressor weighs in at 1325kg, a massive 360kg more than the MX-5. That's primarily the penalty for a hugely stiffbodyshell, together with outstanding crash protection, and a roof that weighs 33kg.

Most people adore Michael Mauer's design for its balance, the often delicate, sometimes aggressive, detailing. From the sloping bonnet - its perfectly retro bulges an elegant reminder of the great 300SL from the '50s - to the stubby tail with its near C-class style tail lights, this car reeks desirability.

Roof erect, it absolutely looks a purpose-designed coupe. Like all Mercedes, the SLK looks best in lighter tones, and especially the traditional silvers. It comes as a surprise to find the apparently streamlined styling isn't quite as slippery as it seems. The Cd figure of 0.35 (the 2.0 is 0.33), is actually worse than the SL's, by 0.01.

The long doors open wide to reveal a roomy cockpit that tries hard to be youthful. Some of the two-tone colour/trim combinations are aesthetically challenged and the mock carbon-fibre on the console needs careful matching, or it can look decidedly tasteless.

For a sports car, the steering wheel is too bulky and awkward to hold and though it is adjustable for reach, it's mounted comparatively low and vertically and not ideally positioned for shorter drivers. Three deeply recessed instrument pods within a hooded binnacle contain the vaguely retro instruments.

Slip down into the wide seat and it's immediately obvious lateral support is going to be marginal. There is more legroom than in the SL, the cushion has a manual height adjustment (the only Mercedes without the availability of electrically-adjusted seats), but the backrest rake only moves through 4.5deg.

At first the cushion seems too flat, but after a day's hard driving the seats proved wonderfully comfortable. The only real difference in packaging between the two Mercedes sports cars is simply that the SLK lacks the SL's handy small shelf/ tiny seats behind the front seats. It compensates with a series of bins, pockets and trays .

Which brings us to the boot. Roof up, its 348 litre capacity is huge by sports car standards. It's almost twice the size of the Z3's and bigger, even, than the SL's. However, volume drops to 145 litres when you lower the roof and, worse, bulky bags are all but impossible to remove unless the roof is again raised. The compromise means you'll go shopping and on holidays in a coupe, and save the convertible for pleasure.

Time to hit the road.

Australian buyers are limited to the fastest SLK of all: the near-$100,000 2.3 Kompressor. Tied to Mercedes' new five-speed automatic, the supercharged four's 7.5sec 0-l00km/h time means it out-accelerates the manual by 0.1sec.

Boosted by an Eaton M62 blower, the 2.3 litre dohc 16- valve engine pumps out 142kW at only 5500rpm and, via an Uluru-sized torque curve, 280Nm on a plateau from 2500rpm to 4800rpm. The blower only works, through a magnetic clutch, when the engine management system decides it's necessary. That's most of the time, if you want respectable performance. 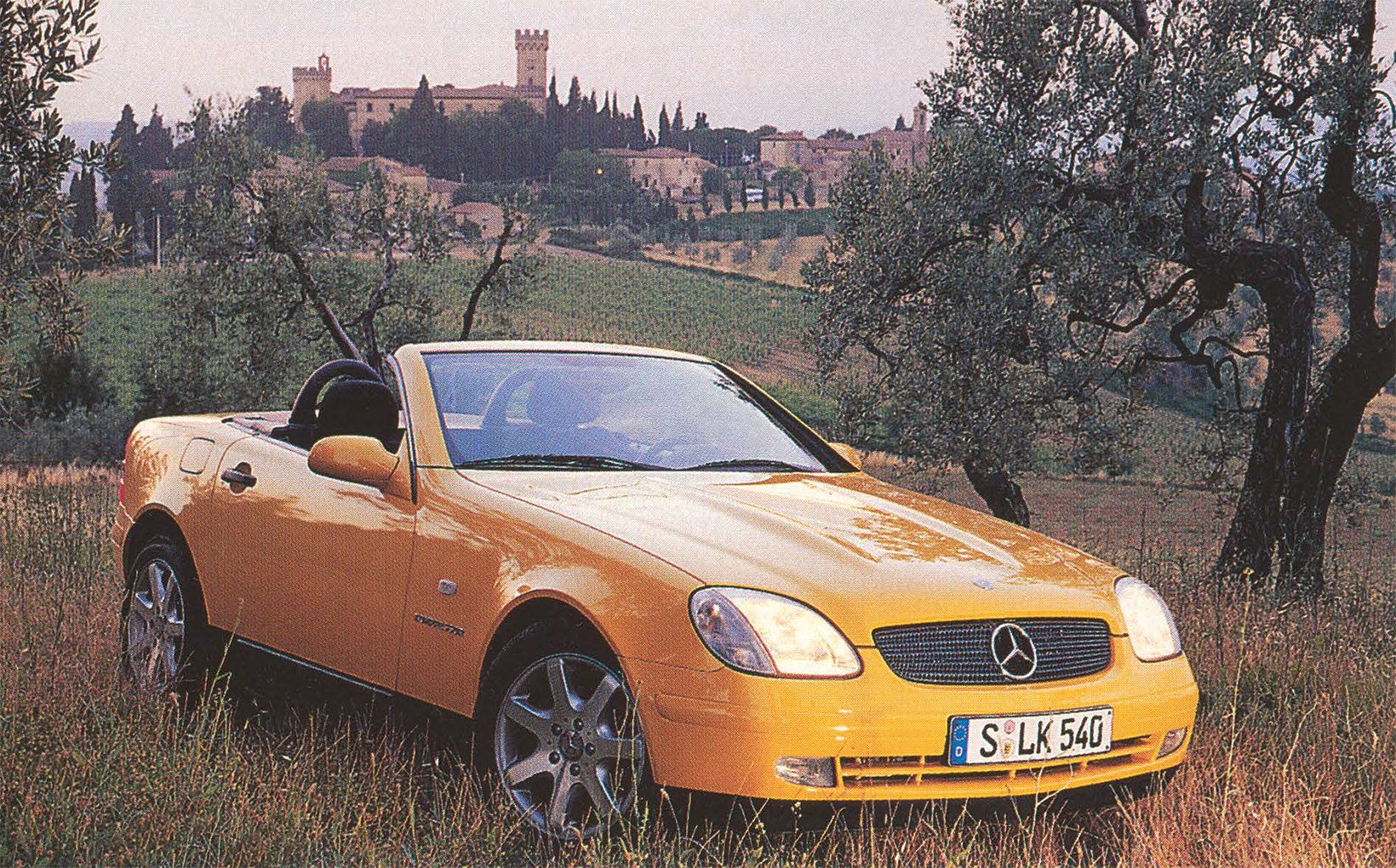 A fascinating machine better able than any other to change character to match mood of the driver.

In terms of outright acceleration and instant throttle response, the engine certainly delivers, with a strong linear shove in the back from as low as 2500rpm. Yet, it is also strangely blunted in its behaviour and lacking the emotional excitement that's so important to a true sports car. The Mercedes engineers have worked hard to give it more aural inspiration than the same engine in the C-class, but with only partial success. There's a welcome rasp to the exhaust through the mid-range, but at idle, and even as the rev counter needle nudges the red, you could believe the sound is coming from a small leak in the exhaust manifold.

What saves the engine is Mercedes' brilliant new auto, for the two blend superbly. This is the best installation so far for the electronically controlled transmission. It works so well, via a traditional Mercedes gate that permits easy manual downshifting, few buyers will prefer the manual.

In hard driving, fuel consumption is going to struggle to better 11.0 L/100km, despite the official claims. A small, 53 litre fuel tank may be adequate for the 2.0 litre SLK, but it means the Kompressor's touring range is unlikely ever to surpass 400km.

A lowish first, combined with all that torque, means there's instant urge from standstill. At the top end, a high fifth gear brings relaxed cruising and a level of civilised motoring few sports cars at any price can approach. Driven in coupe form, there's only a mild rustle of wind even at 200km/h, when the SLK feels incredibly stable. Top down, there's more turbulence than expected for tall people, even with the small wind deflector clipped to the two roll-over bars.

You can drive the SLK hard and fast, for it responds effortlessly to such treatment. The suspension and obvious body strength cushion out the bumps and, in so doing, largely remove the driver from the action. If it's purely sporting responses you're after, you may feel short-changed. But in terms of covering the ground quickly, the SLK is brilliantly effective, for it handles consistently and rides with all the nonchalance of a Mercedes sedan combined with enough tautness to impart a perception of sportiness.

And, once the pedal is through an initial sponginess, it brakes superbly.

A tight 10.6m turning circle means it is wonderfully manoeuvrable, if not exactly agile with 3.2 turns lock to lock. The steering still lacks real feedback, effectively detaching the driver's senses from direct contact with the blacktop.

The Kompressor is fitted with Mercedes' ASR traction control system as standard and it refuses to permit anything as crude as power oversteer to interrupt smooth and consistent understeer. Yes, you can tum the ASR off, but even then it limits engine power and controls wheelspin. This car understeers when pushed but, helped by excellent suspension and body control, its ultimate handling characteristics make it essentially foolproof So what if you can't push the tail out through a favourite comer, or dial in a fraction of steering to clip an apex exactly?

What Mercedes has created is an amazingly well behaved and utterly civilised sports car. It is a fascinating machine, better able than any other to change character to match the mood of the driver. It's no wonder the queue now stretches into 1998.