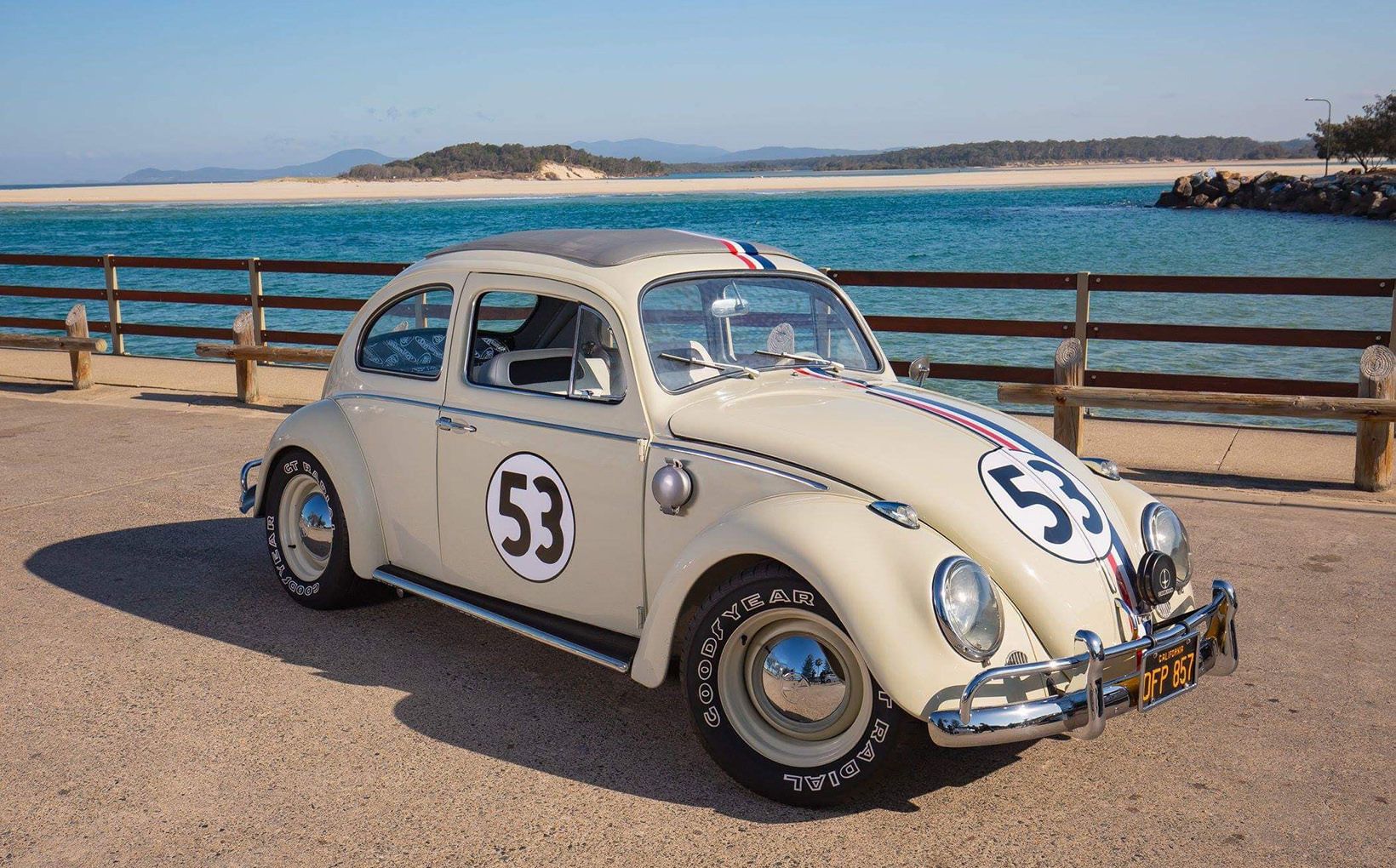 Hollywood has immortalised cars in movies which have become as famous as the stars who drove them and inspired numerous replicas. Think Steve McQueen’s 1968 Mustang fastback in Bullitt, Burt Reynold’s Pontiac TransAm in Smokey and The Bandit, Sean Connery’s DB5 in Goldfinger and Mel Gibson’s Falcon Hardtop Interceptor in Mad Max to name a few. 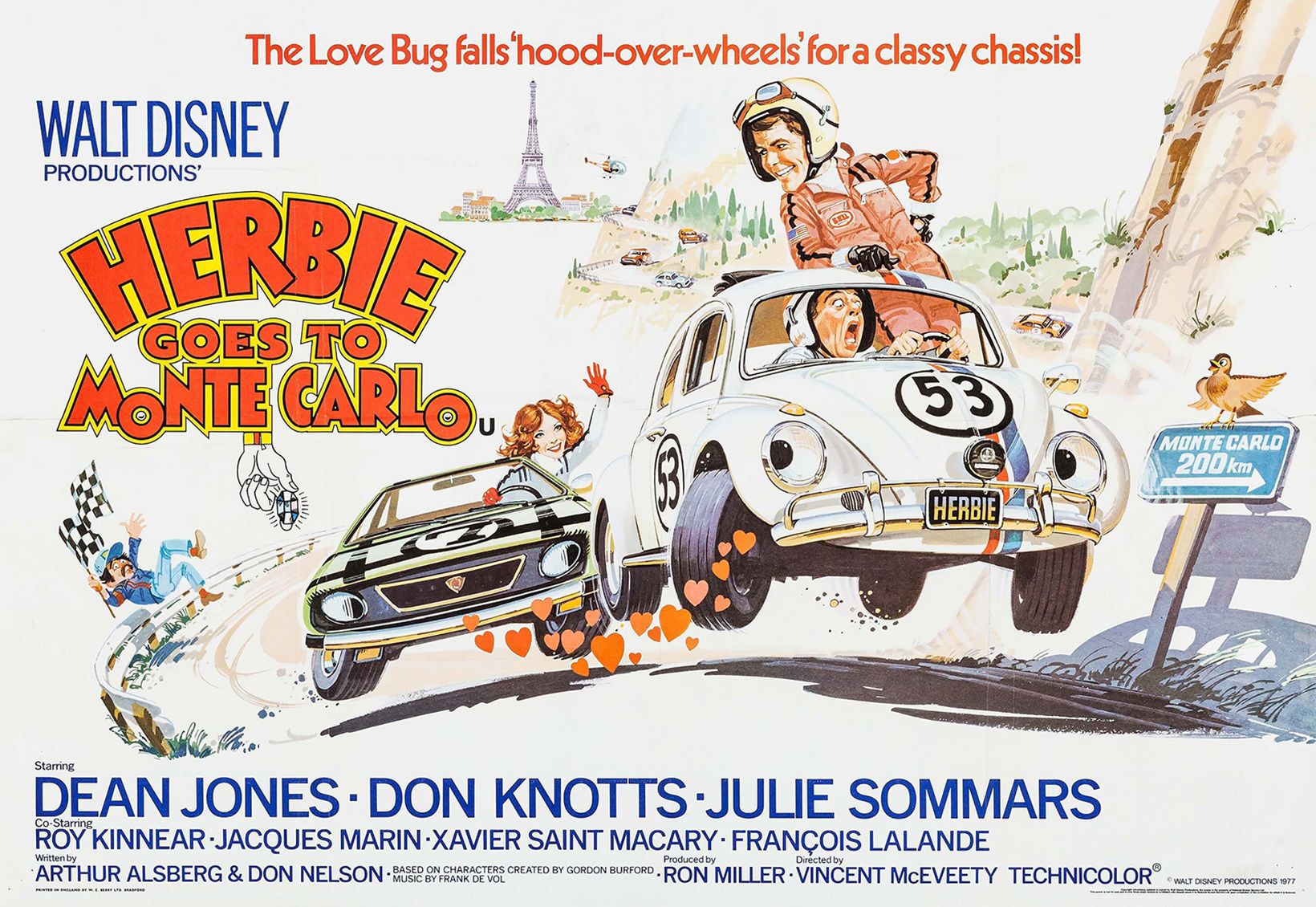 In Herbie Goes to Monte Carlo, he competes in the Trans-France race (a fictional version of the Monte Carlo Rally) and falls in love with a Lancia Scorpion along the way.

These movies have delighted global audiences of all ages, including Shannons Club member Richard Graham who was so captivated by Herbie that he built a tribute to him. A confessed VW addict, Richard has owned VWs since gaining his driver’s licence more than two decades ago and currently owns four Beetles and a split-window Kombi. His outstanding Herbie replica won best European car in the 2021 Shannons Club Show & Shine competition. 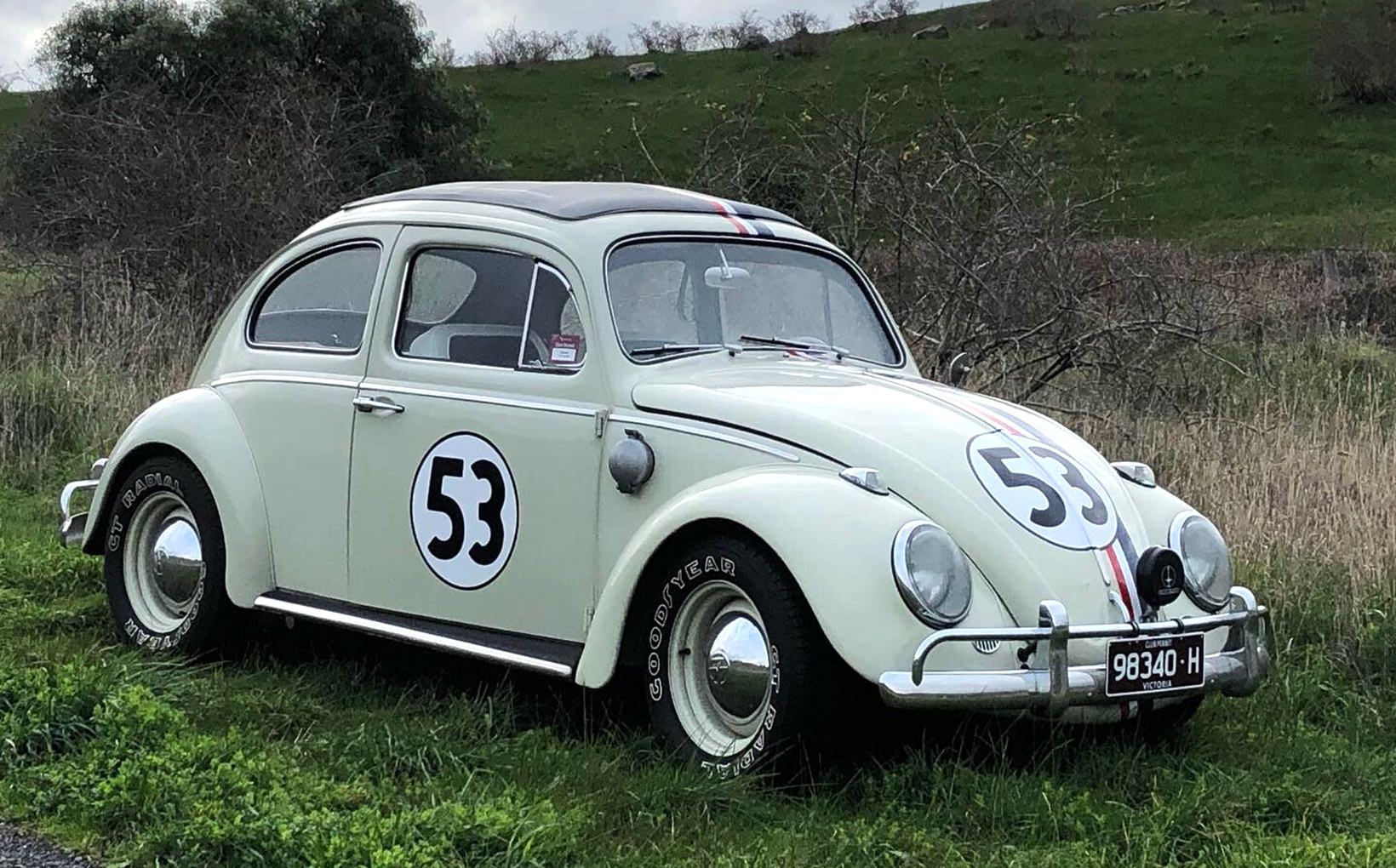 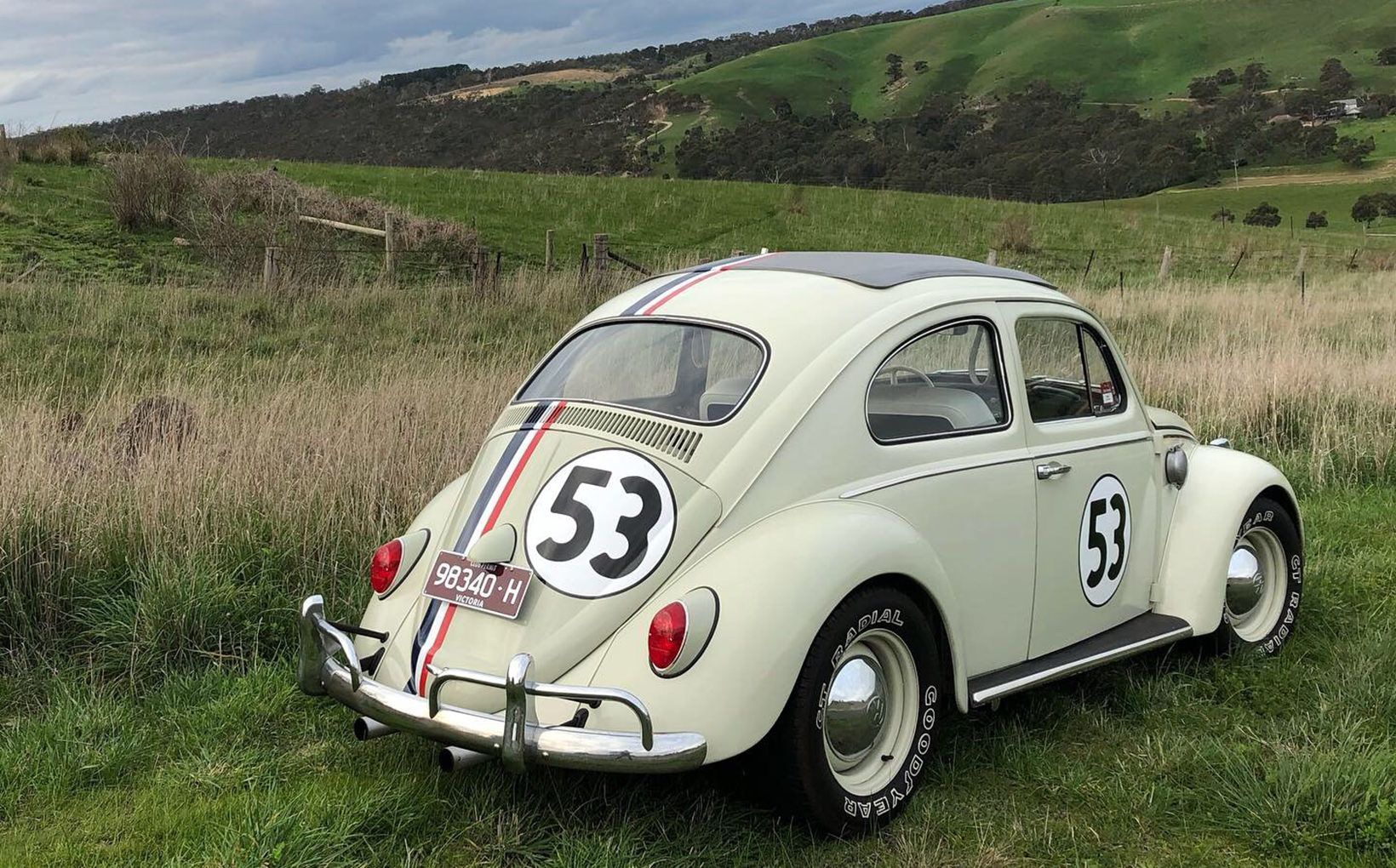 “I’ve loved Herbie from as far back as I can remember and I’ve always liked VWs, so I don’t know if I like VWs because of Herbie or if I like Herbie because of VWs, they go hand in hand,” he says. “I love all the movies, along with all of my Herbie toy cars. I used to collect many of them when I was a kid and still do now.”

Herbie made subtle appearance changes in each of his movies, which only hawk-eyed spotters like Richard would have noticed. So, he chose Herbie Goes to Monte Carlo as the appearance he most wanted to replicate, like many other replica builders that globally represent hundreds of owners. 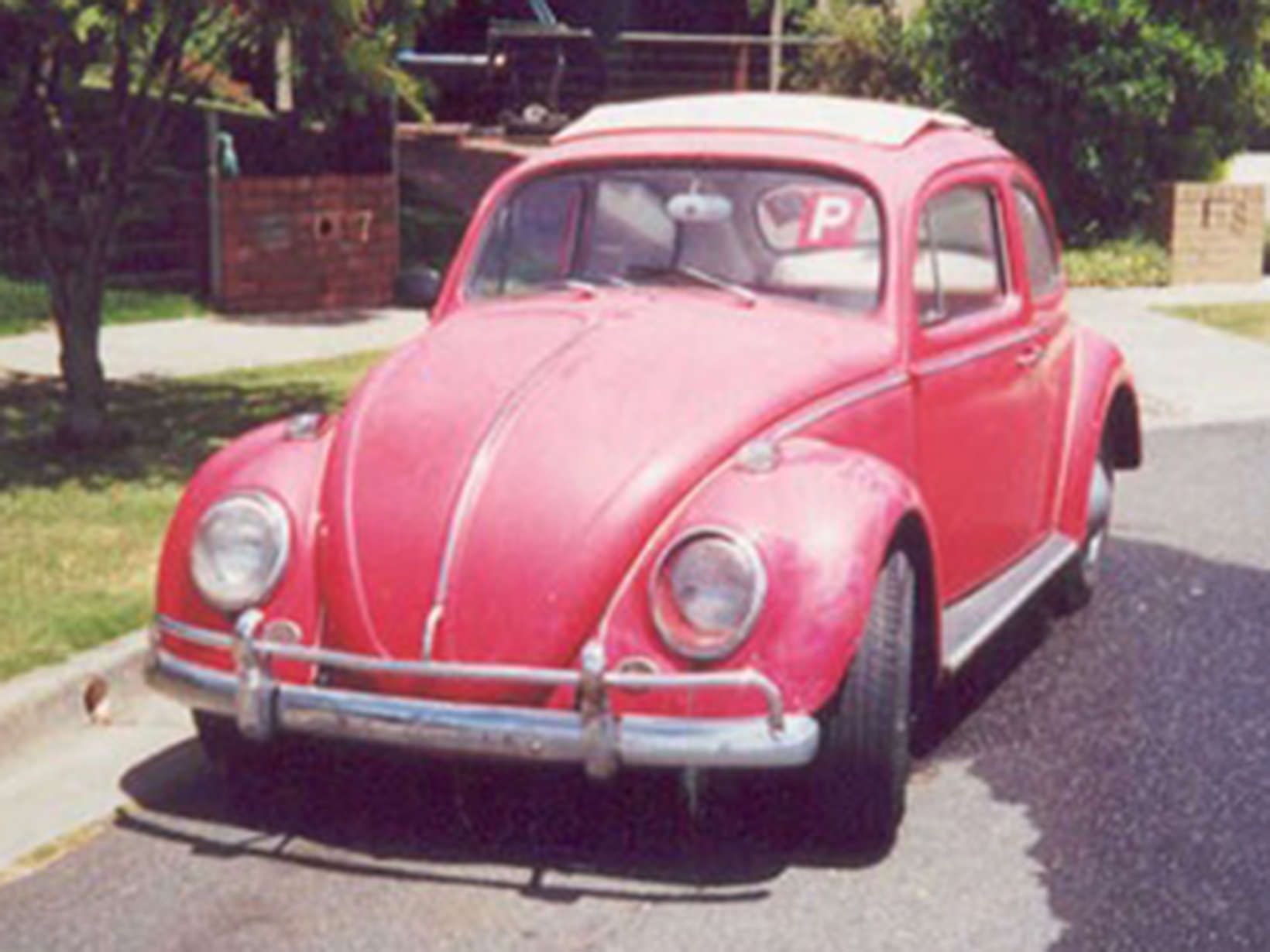 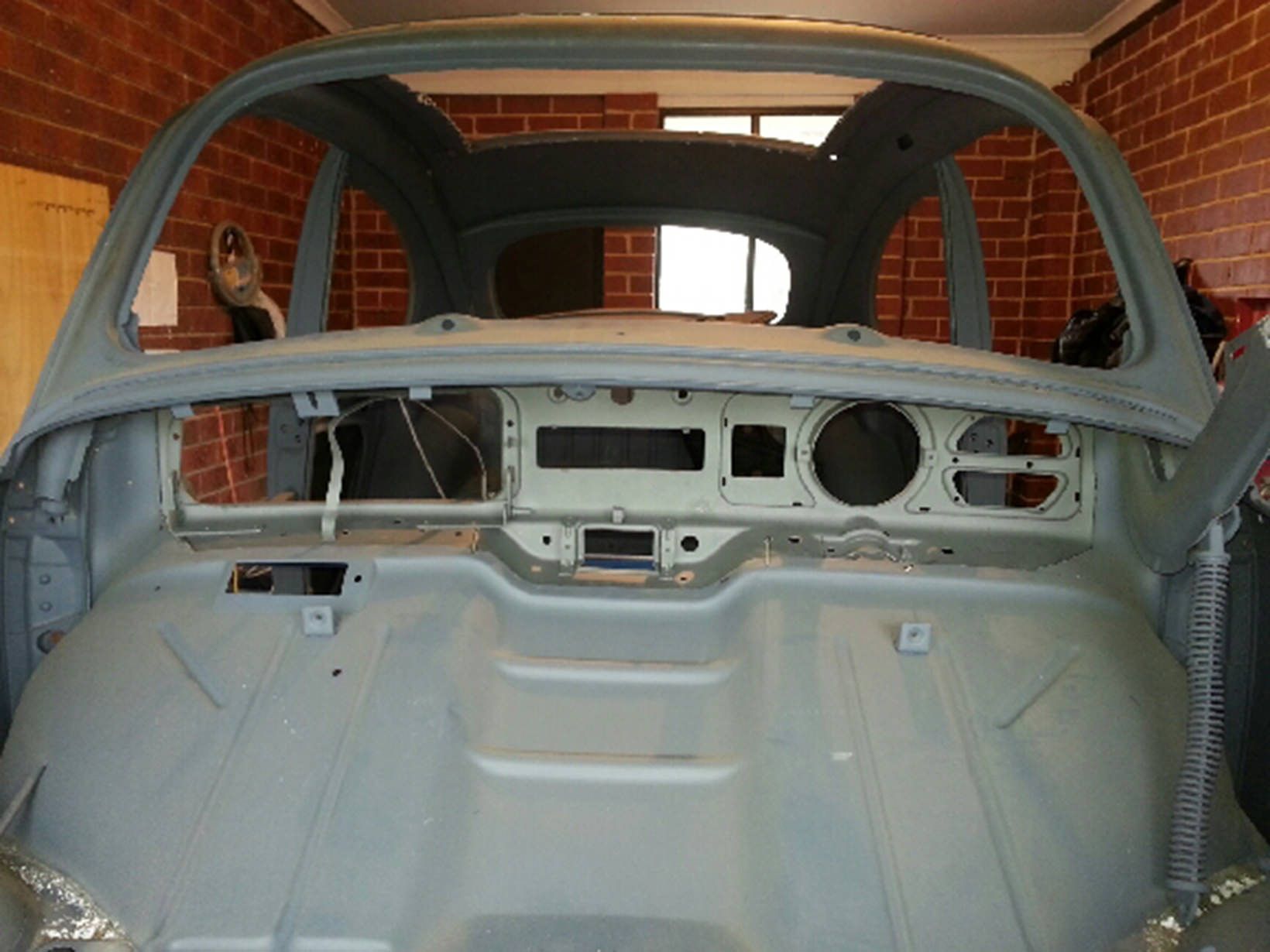 How Richard’s Beetle looked before its Herbie transformation. Conversion from RHD to movie-correct LHD was straightforward, using locally-sourced parts including the complete dash insert.

“In that movie Herbie had a particularly sporty look,” Richard explains. “He had nice wide wheels and Goodyear tyres with large white lettering on the sidewalls, which you don’t see much anymore and they really popped on this car, they really stood out. That movie also had a lot of racing scenes in it and the car just looked great. Out of all the replicas in the world, it would probably be the most copied one.”

Richard took no shortcuts in authenticity, right down to installing a special kit which allows his Herbie to perform many of the movie tricks via remote control, much to the amazement and delight of unsuspecting onlookers. 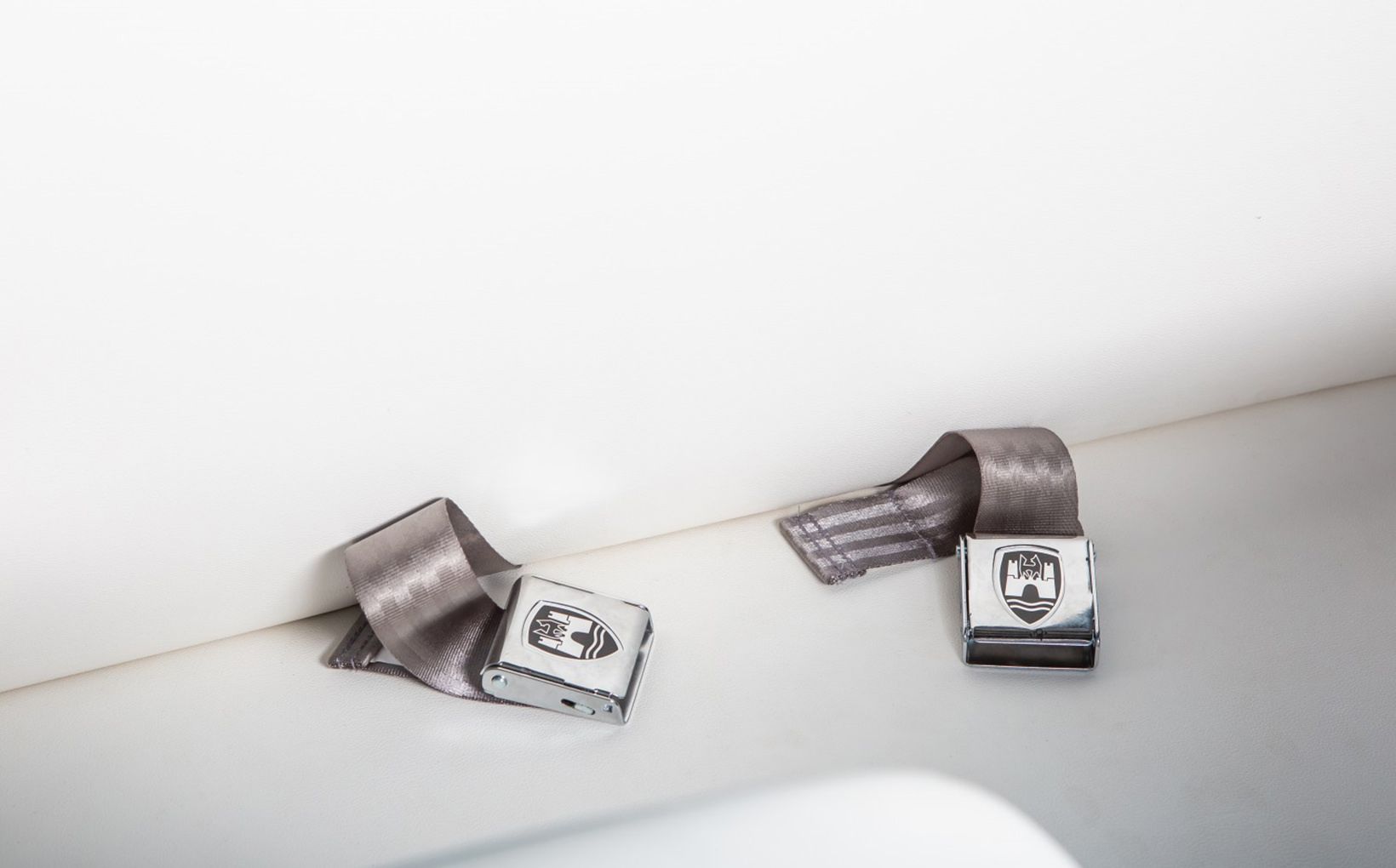 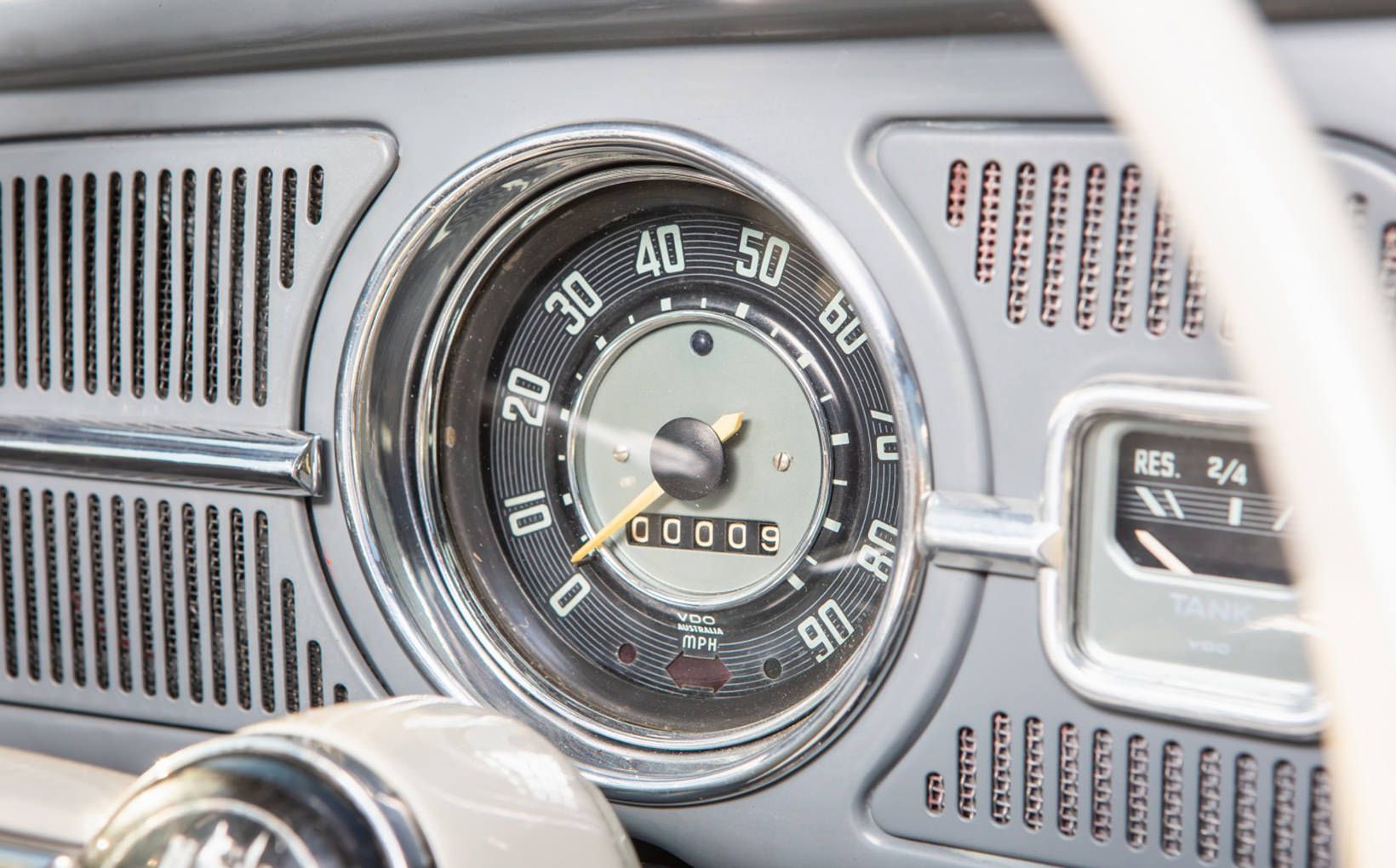 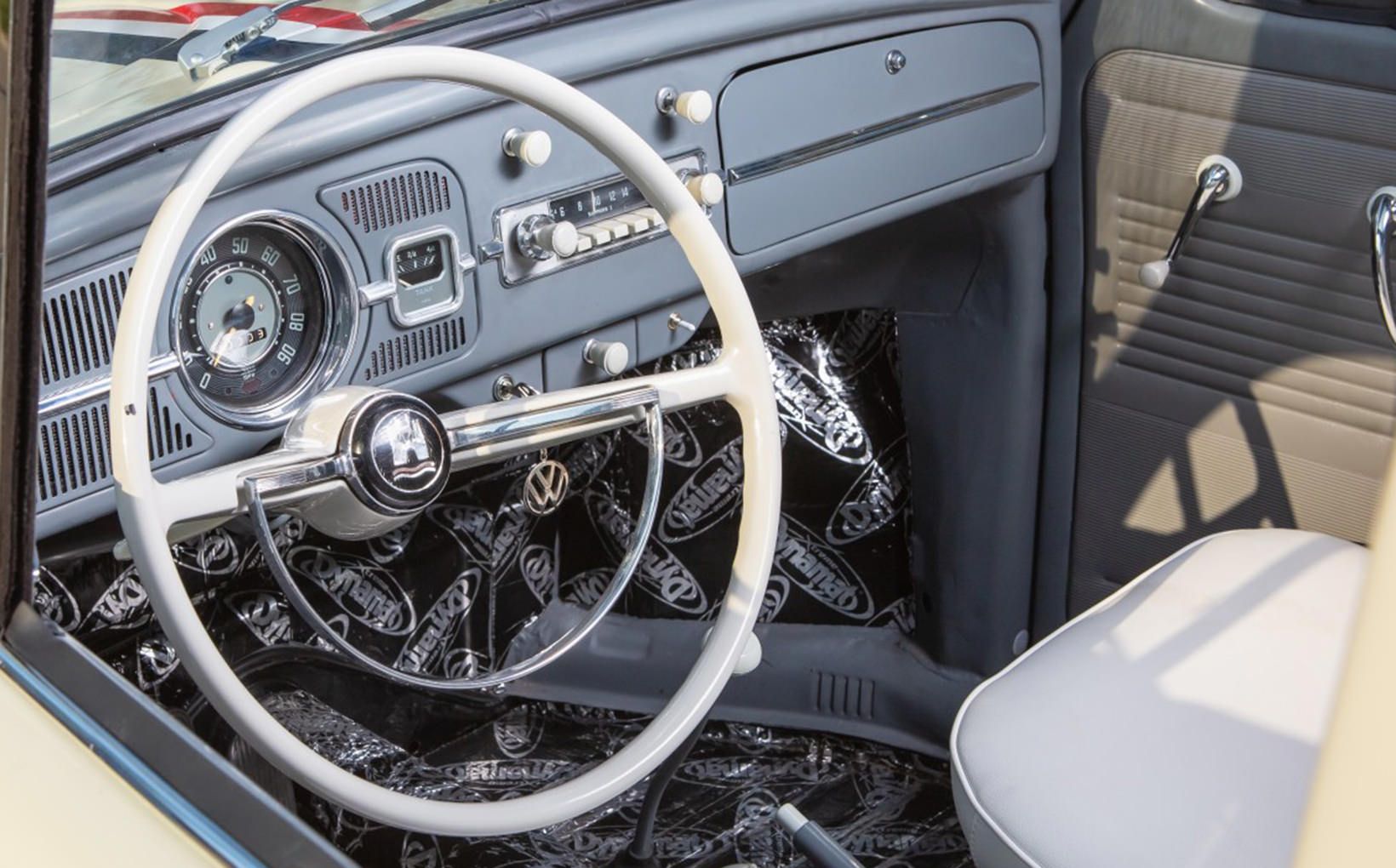 This kit consists of a hand-held radio transmitter operated discreetly by Richard outside the car and a relay box hidden inside. Together they can open and close the front bonnet, make the headlights switch on and off and rotate side to side, beep the horn and operate the wipers. It even does the “dog piddle thing” from the side, although Richard uses water rather than the black sump oil depicted on the big screen for obvious reasons!

“It’s quite good fun at shows when people are looking over the car and then all of a sudden it starts doing these tricks they see in the movies,” he quips. Richard clearly has a mischievous streak, just like his bamboozling Beetle. 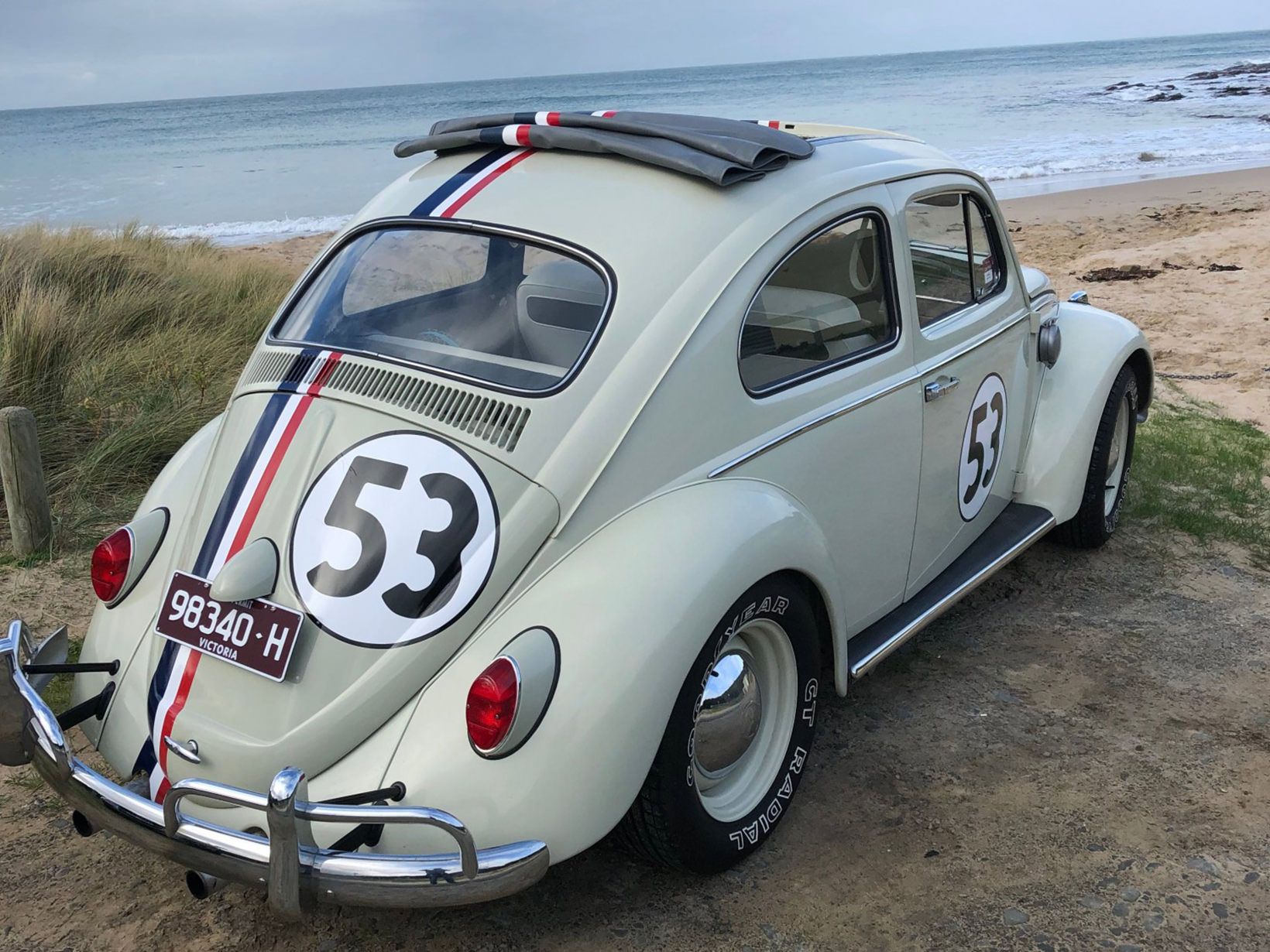 This is a quality Herbie replica. Note how the racing stripes continue across the fabric sunroof, as seen in the movie.

This is his fourth and finest iteration of Herbie. The three that preceded it were by his own admission half-baked attempts, based on Beetles of indifferent quality that were clearly not destined for greatness. “The handbrake failed on my first one, which rolled down a hill and smashed into a friend’s house,” he laments. “It was later destroyed in a crash at the Calder Park Thunderdome!”

The basis of this replica was purchased in 2000 for $600. It started life in 1966 as a shiny new 1300 Deluxe manufactured at Volkswagen Australia’s Clayton plant in Melbourne, complete with factory-installed fabric sunroof. When Richard took ownership it was unregistered, the original engine was long gone and it was in need of a total rebuild.

“This was going to be my dream car,” he says. “I wanted it to look like I bought one straight off the movie set and took it home.” 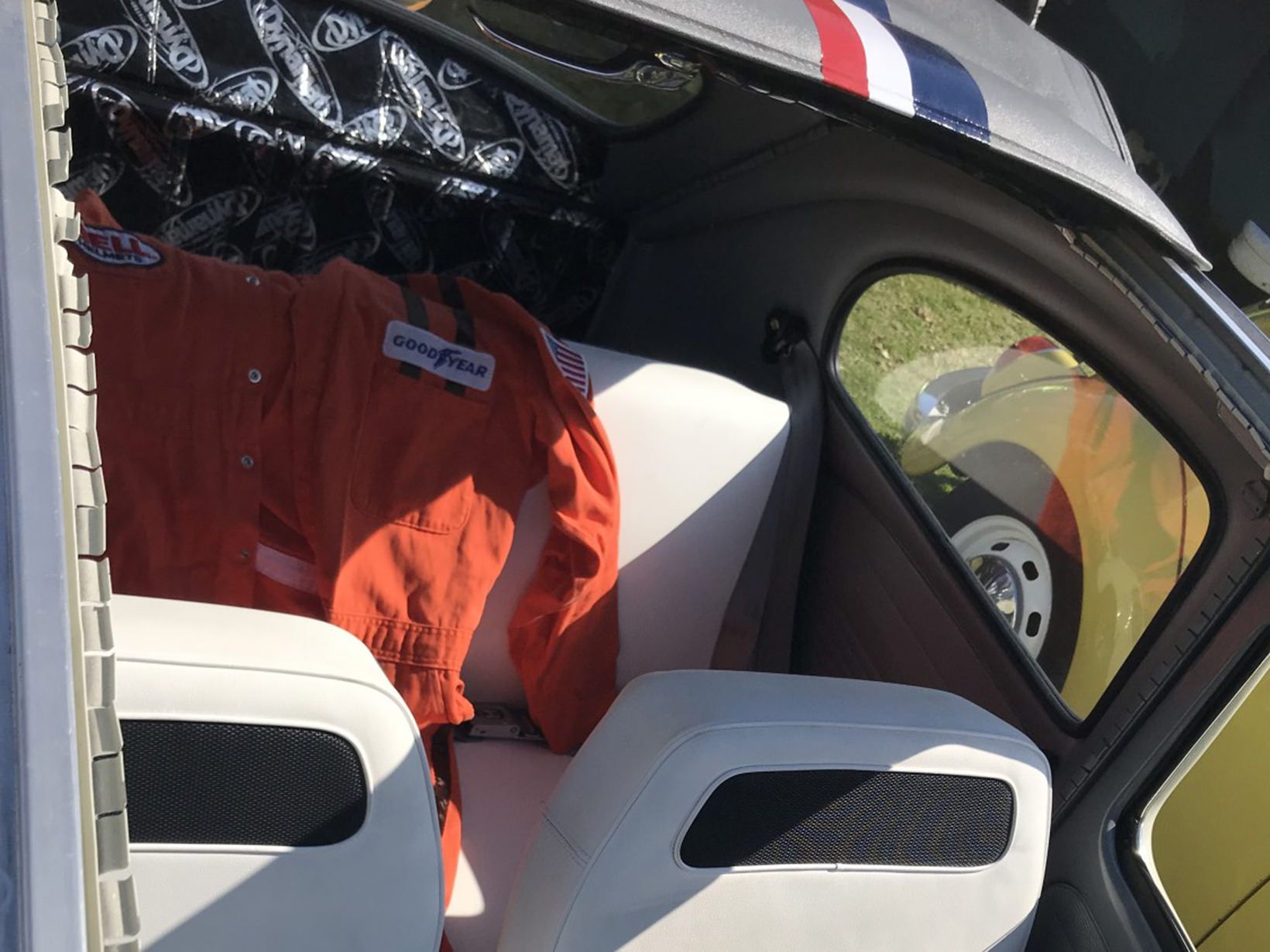 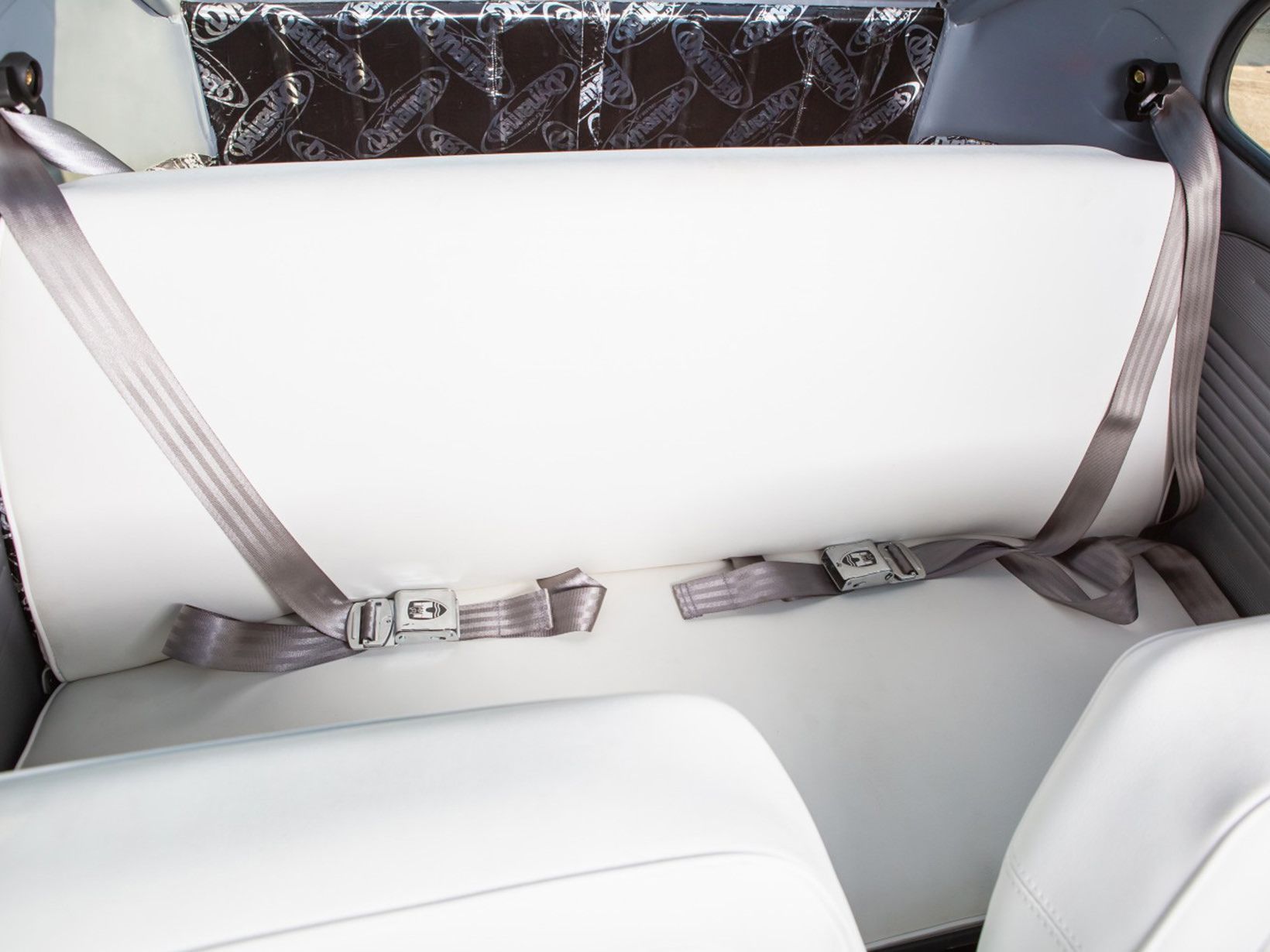 Richard did an excellent job in replicating Herbie’s seats complete with mesh-covered ‘blind driver’ slots. Orange driving suit is a replica of that worn by Herbie’s driver Jim Douglas (played by Dean Jones) in the movie.

That started with a left-hand drive conversion of course, which was made relatively easy by the Beetle’s ambidextrous design and a Melbourne-based importer of Beetle convertibles that converted them to RHD for Australian buyers. The plentiful LHD cast-offs from that process allowed Richard to cheaply source all the components needed to complete a mirror conversion.

The body was unbolted from the chassis and everything was sandblasted down to the last nut and bolt. Although the movie car is based on a 1963 model, there are only minor cosmetic differences in a ‘66 which were easily rectified using ‘63 parts.

Then there are key features that make this an authentic Herbie, according to expertise Richard has largely gained through online Herbie forums. The body paint is a standard VW colour (L87 Pearl White) adorned with Herbie’s signature No.53 racing numbers (53 was chosen by movie producer Bill Walsh in honouring US baseball star Don Drysdale’s player number) and red, white and blue vinyl racing stripes (very patriotic). They run the full length of the vehicle, including across the fabric sunroof, which Richard says required use of special vinyl paint. The interior is also finished in flat grey paint just as Disney did, to stop studio light reflections during filming. 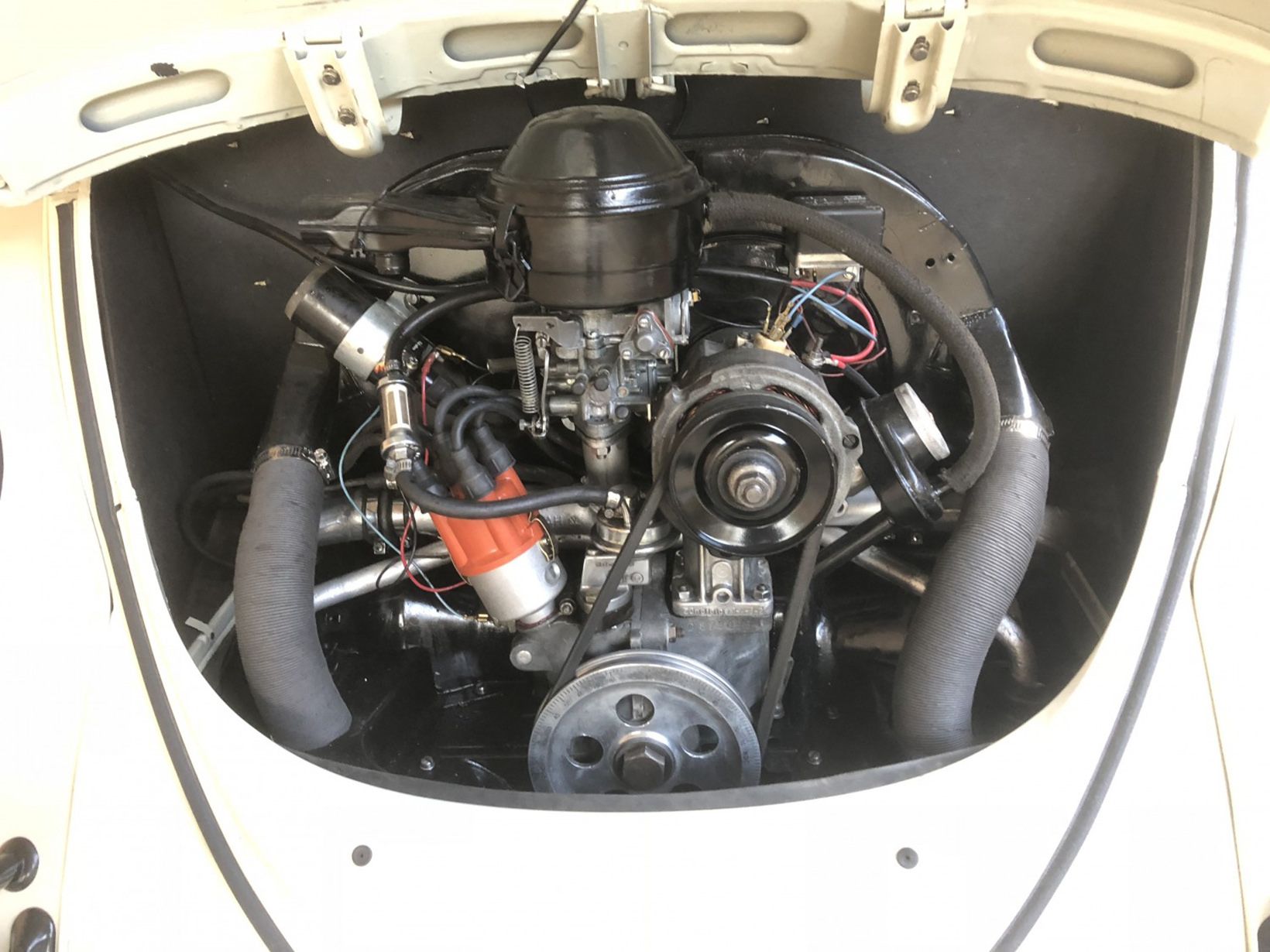 Herbie’s power source was never revealed, so a shiny 1600 does just fine.

Then there’s the retrimmed white vinyl seat trim, featuring unique front seats with black mesh-covered slots in the backrests. This was another Disney trick to assist what they called ‘blind drivers’ who would sit low and out of sight on the rear floor with extended steering and pedal controls. Each time Herbie appeared to drive by himself in the movies, the stunt drivers were looking through these slots to see where they were going! Richard obviously didn’t need those slots, so his seats are solid with the black mesh screens carefully positioned to create the same visual effect. 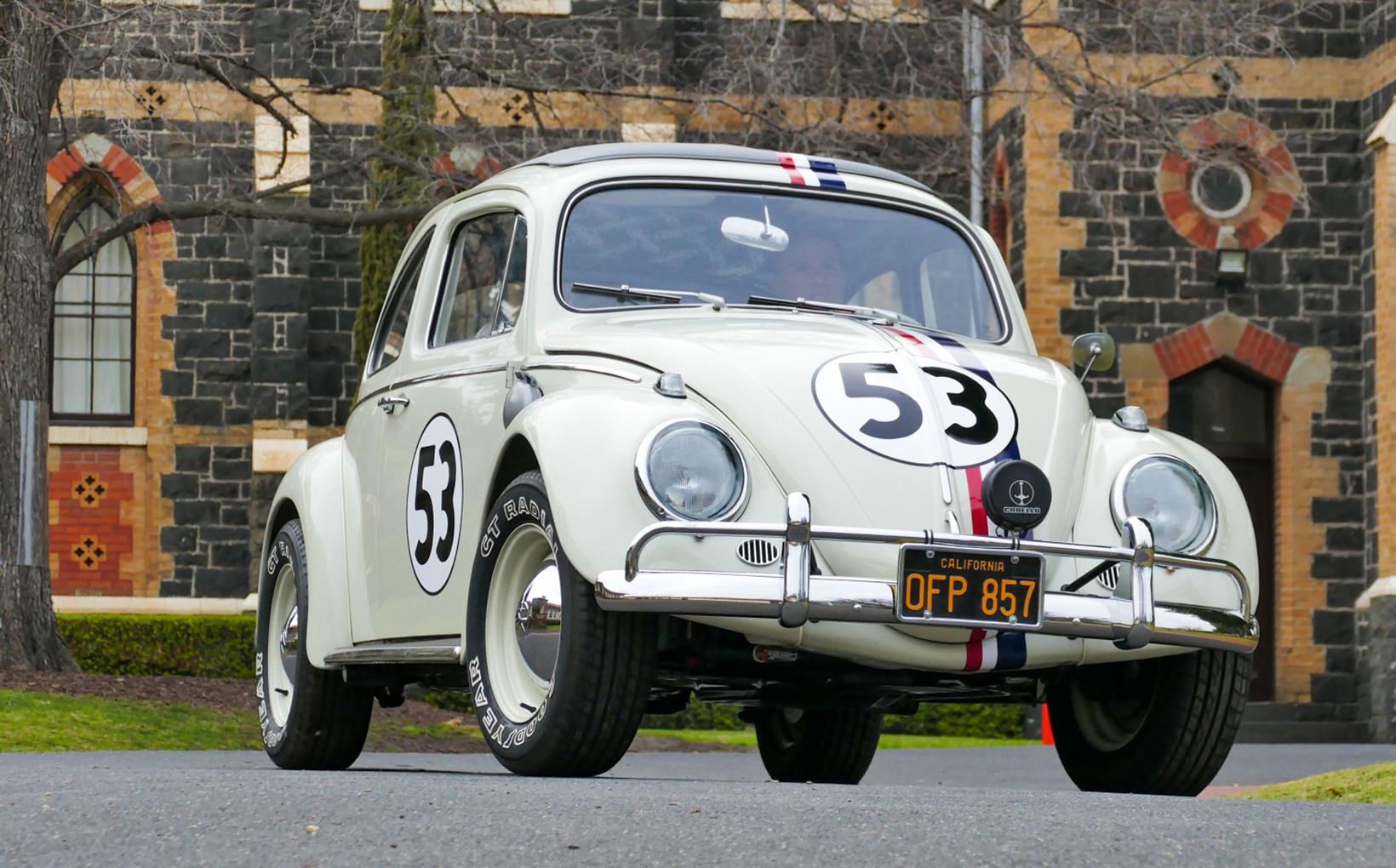 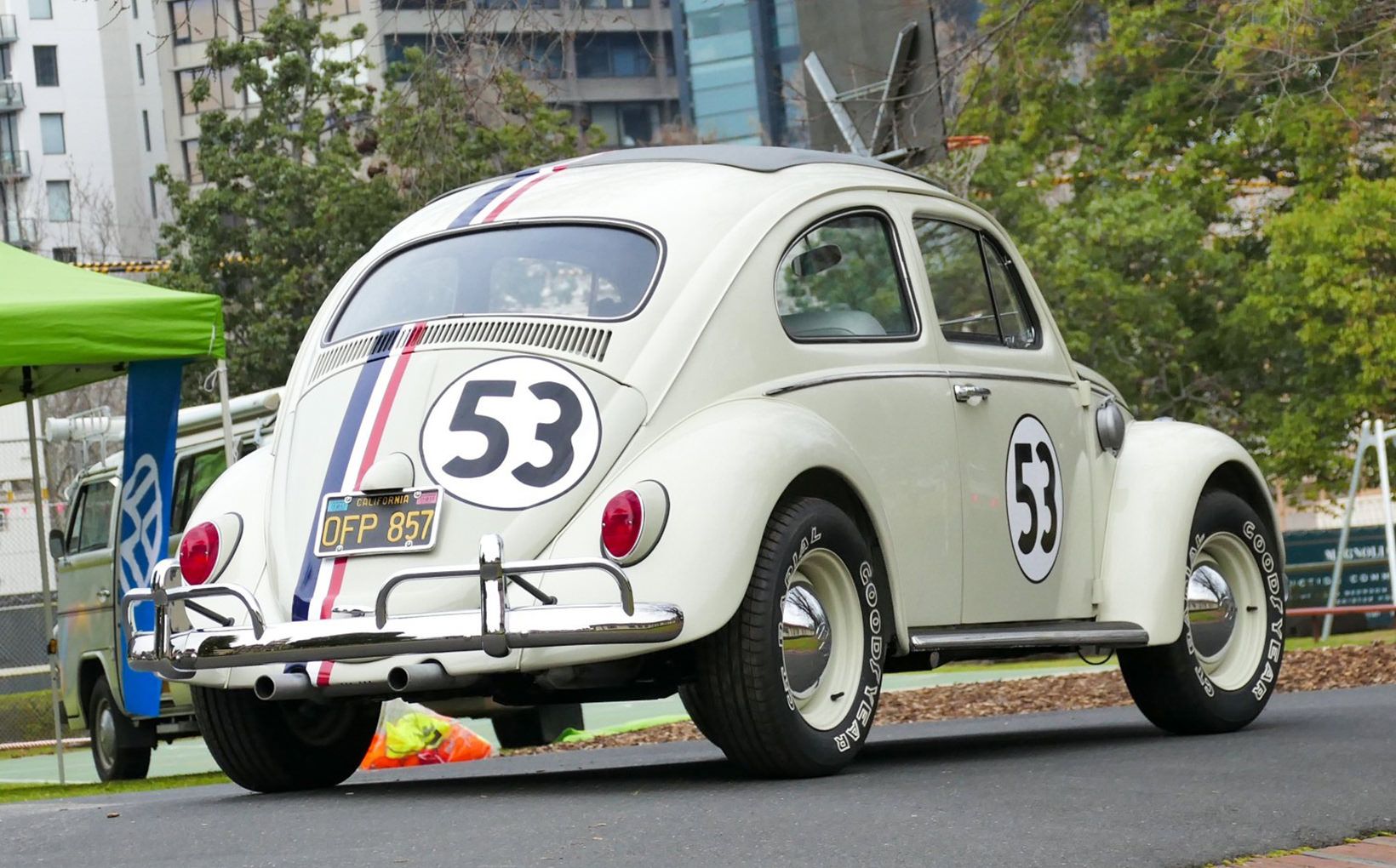 The single driving light on the front bumper was there specifically to house a small hidden camera for Disney to record film vision from bumper bar height. Richard’s version doesn’t contain a camera, but with its black Carello-branded cover is an accurate reproduction of the original.

So, too, the conspicuously large fuel tank filler cap. This was required for two reasons. One was that the Beetle with its front-mounted fuel tank did not have an external filler cap as standard (refuelling is done with the bonnet open) and the movie script required the panicked villains to hide a huge stolen diamond in Herbie’s tank by dropping it through this ‘dummy’ filler. Hence the large quick-release cap often seen on classic sports cars like Cobras, GT40s etc, which Richard managed to find on eBay. 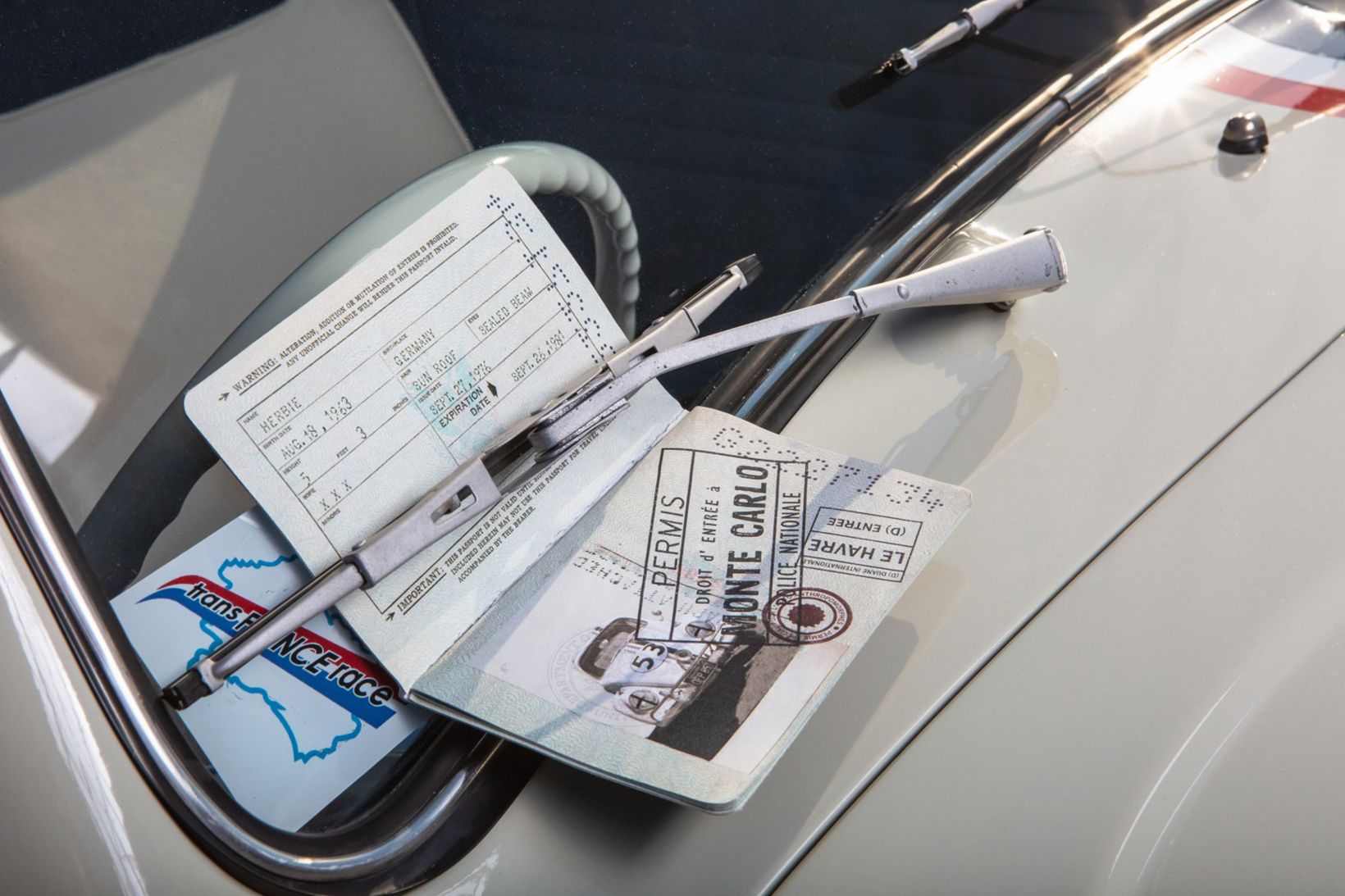 The wheel and tyre combination also looks like an authentic match for the movie car, with deep-dished offsets, chrome hubcaps and ‘Goodyear GT Radial’ raised white lettering on the sidewalls. However, just like Hollywood, all is not what it appears.

The Goodyears featured in the movie ceased production in the late 1970s and even if Richard could have found an original set somewhere, he didn’t fancy driving around on tyres that were four decades old. So, he fitted a set of new Yokohama radials and achieved the movie look by applying raised white lettering which was made-to-order by a specialist US firm. These rubber letters are applied using a special adhesive supplied with the kit.

Richard also revealed that his widened rims are 15-inches in diameter, compared to the smaller 14s used in the movie. This was needed to clear high-performance disc brakes, which are part of an underbody upgrade that also includes anti-sway bars, Koni shocks, steering damper and a modified four-speed gearbox from a Formula Vee open-wheeler. Although it currently runs a stock 1600cc engine, Richard has plans for a much hotter 200bhp version down the track, so the chassis and drivetrain were designed with that in mind. 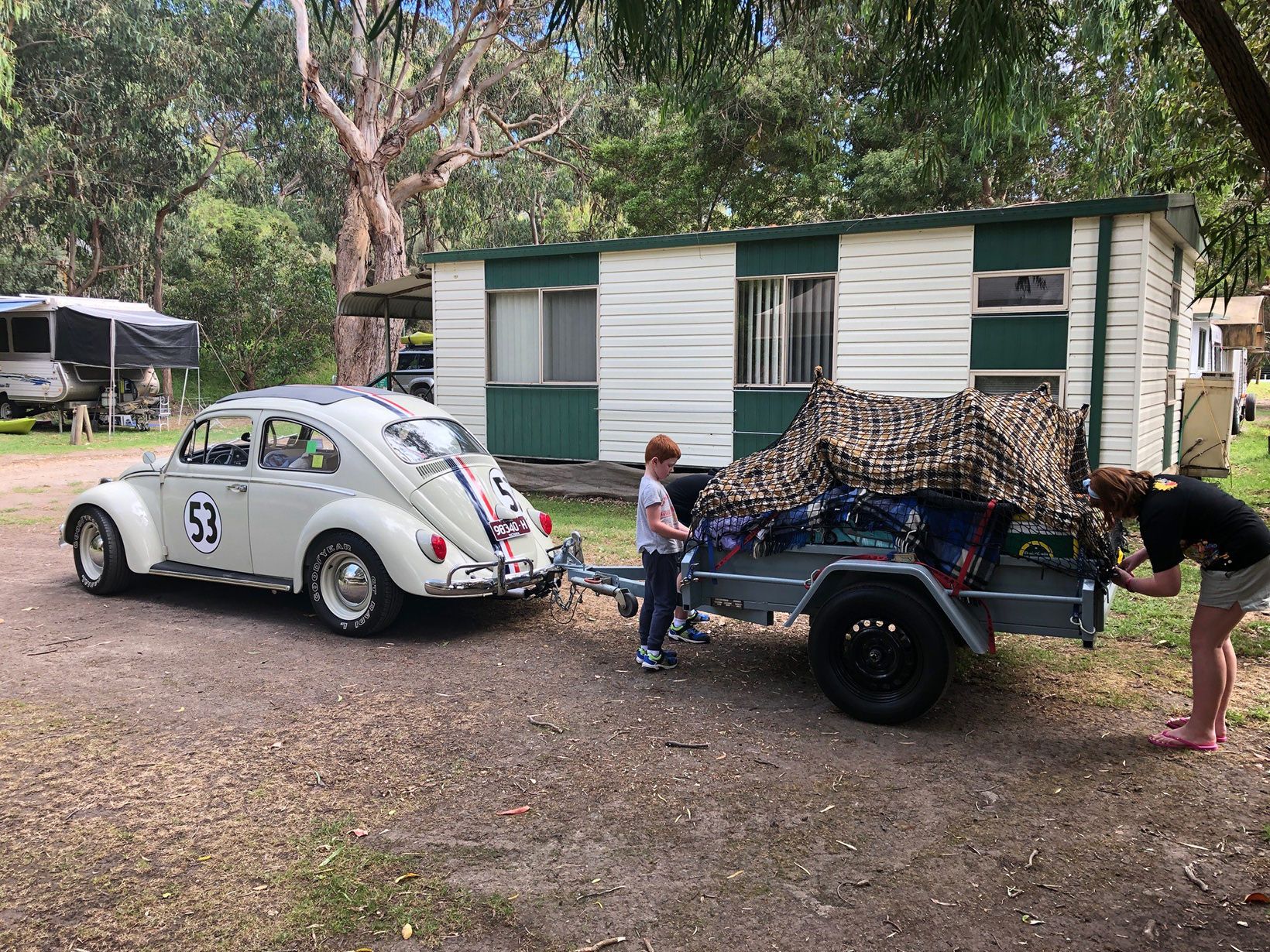 Richard’s Herbie is up for anything, including family camping trips with fully-loaded trailers.

So, how do other road users react to Herbie? “It’s like driving around with a celebrity in your car,” Richard says. “People look at it twice and then it’s like ‘hey, that’s Herbie!’ particularly adults who obviously know more about the car and the movies than their kids. Lots of people take photos and ask questions. You get used to it after a while.”

Richard attends numerous events hosted by the Volkswagen Club of Victoria, of which he’s been an active member for more than 20 years and where he’s gained most of his Beetle knowledge.

He clearly enjoys driving Herbie far and wide, as evidenced by a recent family camping trip along Victoria’s picturesque Great Ocean Road for which he fitted a tow-bar and hauled a box trailer. 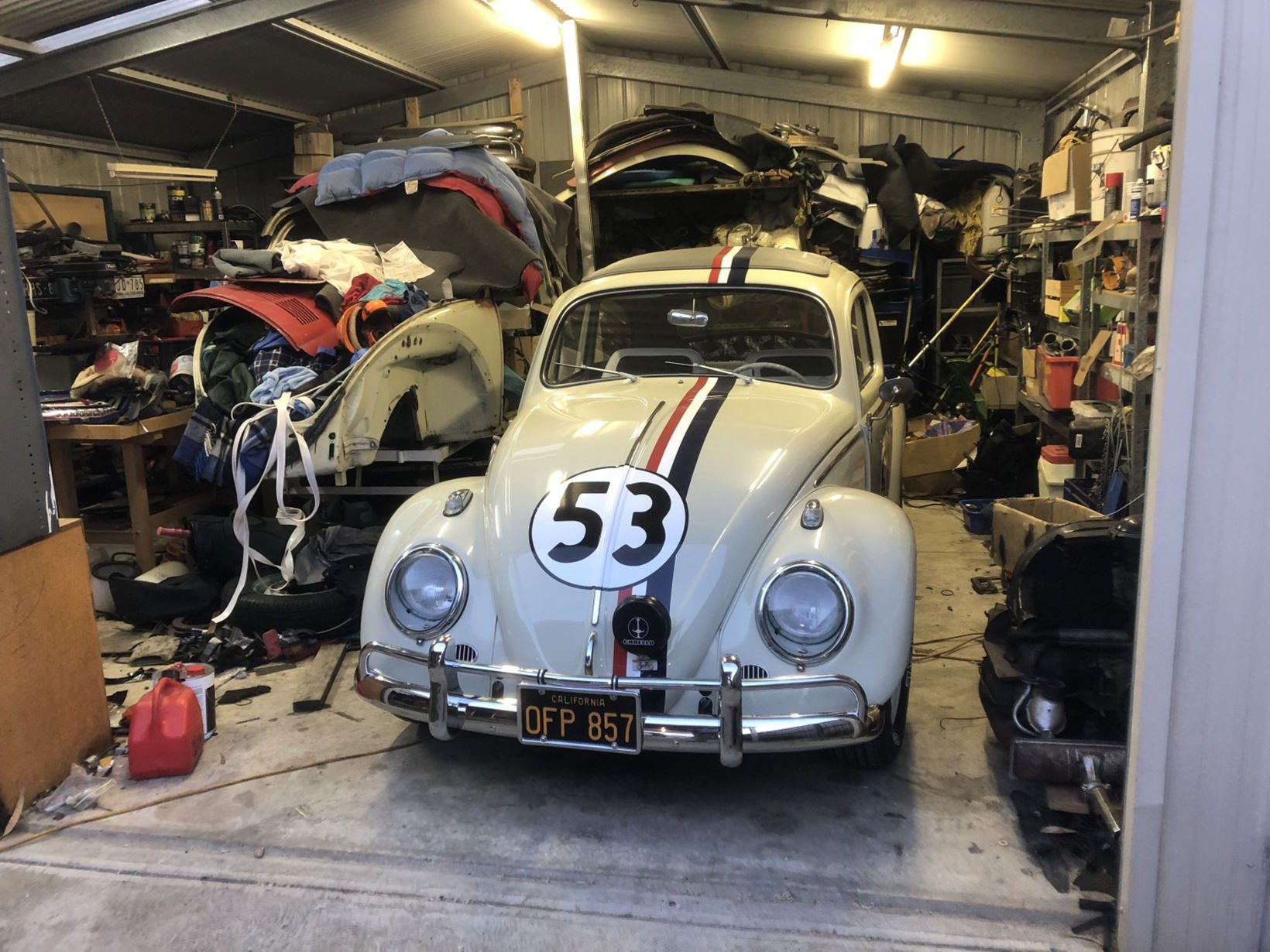 Note authentic 'OFP 857' California license plate (as seen in the movie) for display purposes only.

“I built this car for my own enjoyment and if no-one else liked it, it wouldn’t bother me,” he says. "I’m often happy just to sit and look at it in the shed. I enjoy looking at it more than anyone, I think.

“It would be nice to own one of the originals that appeared in the movies but (because of rarity and value) I probably couldn’t enjoy getting out and driving it everywhere like this one, so I’ll stick with what I’ve got. I’ll never sell my Herbie.”