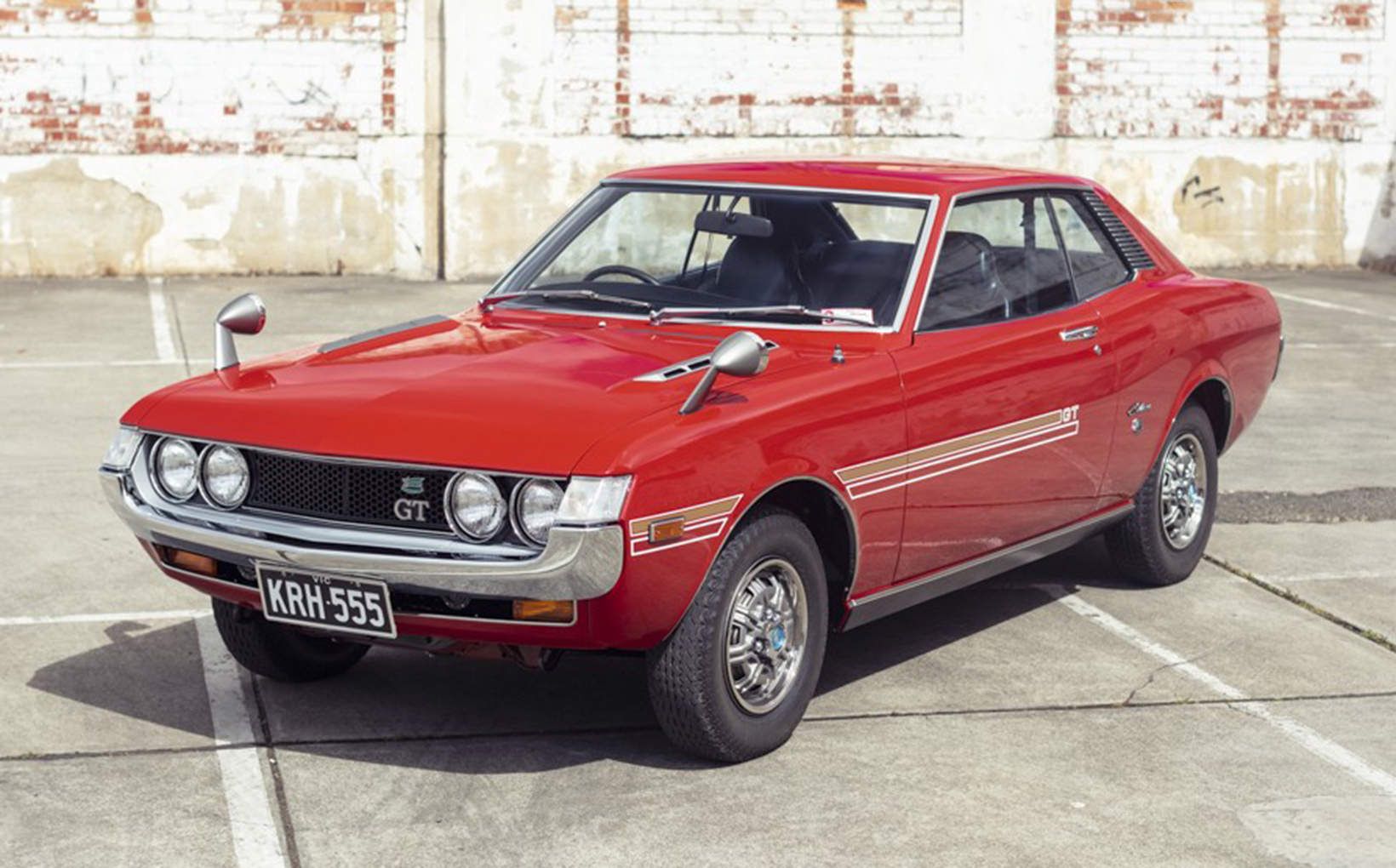 Imagine if you could travel back in time to experience what it felt like to drive a brand-new version of your favourite classic car out of a shiny showroom.

Nick Grakini came as close as any mere mortal could to realising that dream when he drove his 1971 Toyota Celica GT - freshly restored to exact factory specification - out of Melbourne’s Royal Exhibition Buildings at the conclusion of Motorclassica 2019.

“The whole idea was that I was like the factory in Japan producing the car and Motorclassica was the AMI Toyota showroom in 1971,” Nick explains. “So, when I drove it out of the exhibition building at the end of the show, it was like driving away in a new car. I just wanted to get it to its peak and then experience that 1971 new car feeling.”

The “peak” Nick refers to rivals Mount Everest in altitude. One man’s four-year obsession with achieving as close to OEM perfection as possible, which earned this rare Toyota not only Motorclassica’s People’s Choice Award but also the Hayai Kurama – A Tribute to Japanese Sports Cars (Best in Class) and finalist for Restoration of the Year. It was also a deserving winner of the Asian category in the Shannons Club's 2021 Show & Shine competition. 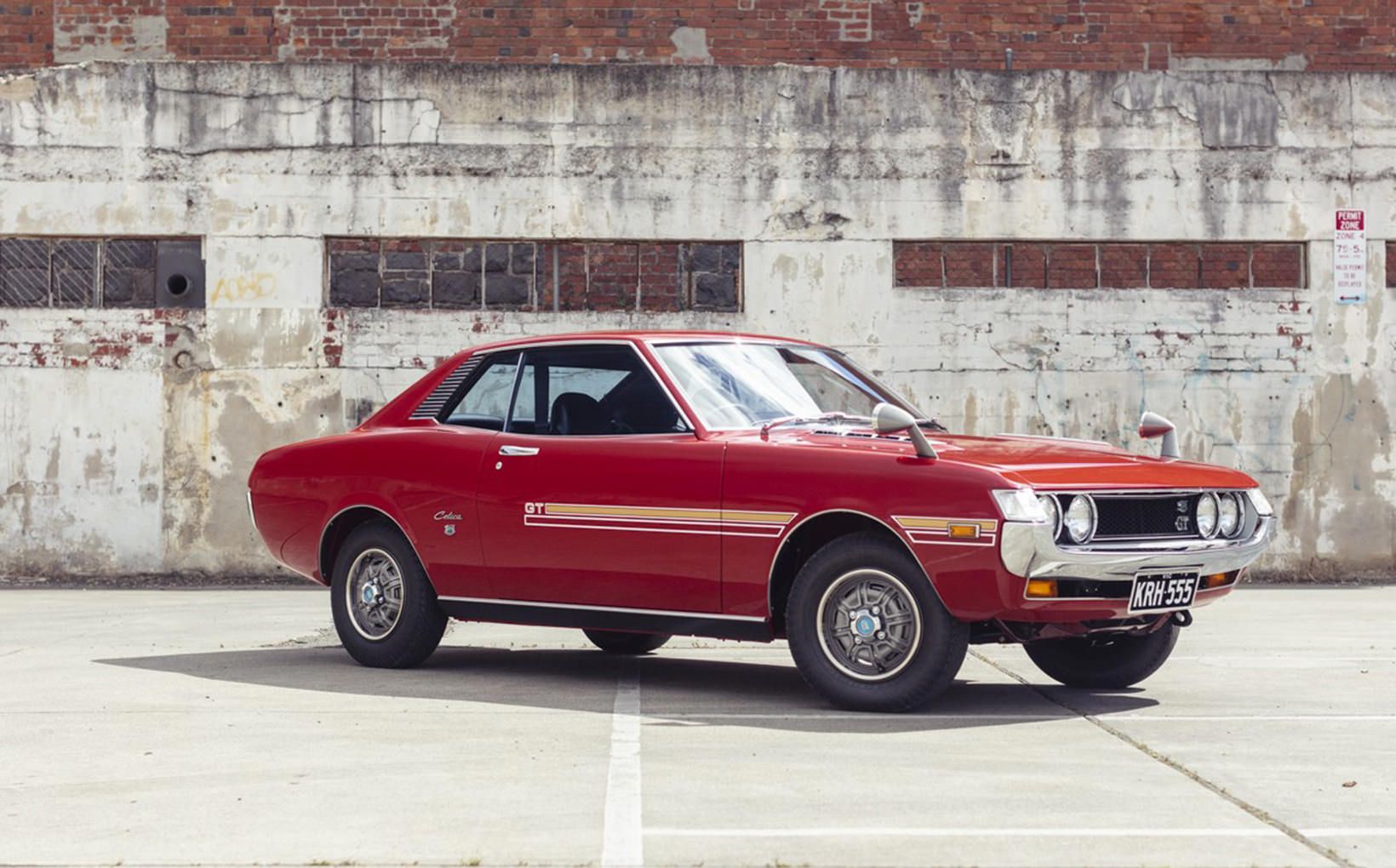 The “peak” required Melbourne’s Re-creation Automotive to perfect the bodyshell on a rotisserie and every part used in the restoration had to be genuine Toyota NOS (New Old Stock), which Nick patiently tracked down online and purchased from suppliers around the globe. That’s every suspension bush, every seal, every clip, every hose, every nut, bolt and washer. The engine bay, with its prized twin-cam engine, has like the rest of this car been finished to an amazing showroom standard.

“There’s a 'Toyota Genuine Parts Master Catalog' I found on the internet, which is about 800 pages or so and was only printed in Japan,” Nick reveals. “It’s basically the bible for this car as it goes through every aspect of it, every nut and bolt.

“Toyota documented the car exceptionally well because even though it’s written in Japanese, each component no matter how small is illustrated in exploded view and identified by a ten-digit part number and fortunately you don’t need to speak Japanese to understand those.

“Each ten-digit number is actually a code, because every digit (when identifying a bolt for example) indicates its length, tensile strength, how many washers, what type of washers etc. I had to learn how to decipher those numbers to ensure every nut, bolt and washer went to the right place. The end result is everything bolted together with minimal effort, just like it did in 1971.” 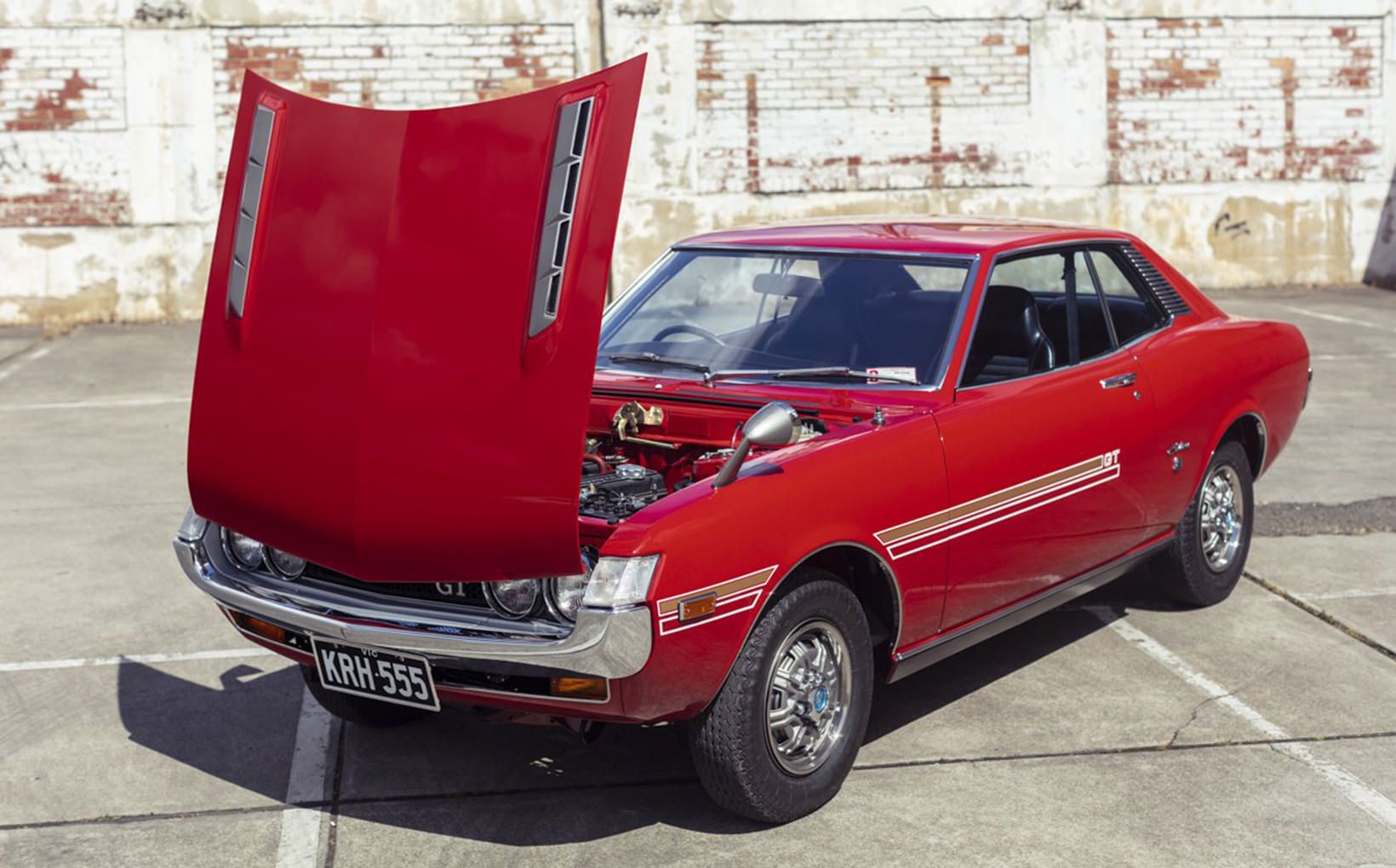 So, you might ask, why such fanatical attention to detail in restoring a Toyota Celica? Because Nick’s TA22 is not the same as the 2T 1.6-litre pushrod LT and sportier ST export models that were sold here in the early 1970s. His GT was designed for the Japanese domestic market and not sold here.

The TA22 GT has unique bonnet flutes, body decals and wheel trims and its interior features oil pressure/ammeter/water temperature gauges, a full-length centre console and all-red rear indicator and taillights similar to US cars of the same age. It also came with luxury appointments like power windows and a rear window demister, but the biggest difference was the jewel under the bonnet with a rich heritage of success in racing and rallying.

Toyota’s free-revving 2T-G 1.6 litre twin-cam four, with 9.8:1 compression, hemispherical combustion chambers and dual 40mm twin-choke Mikuni side-draughts, was good for 115bhp (86kW) at 6400rpm and safe to a screaming 7000rpm. And it needed 5200rpm to access 105 ft/lbs (142Nm) of maximum torque. This peaky nature, consistent with the 2T-G’s competition breeding, required sustained high revs within a narrow rpm band to keep it on the boil. 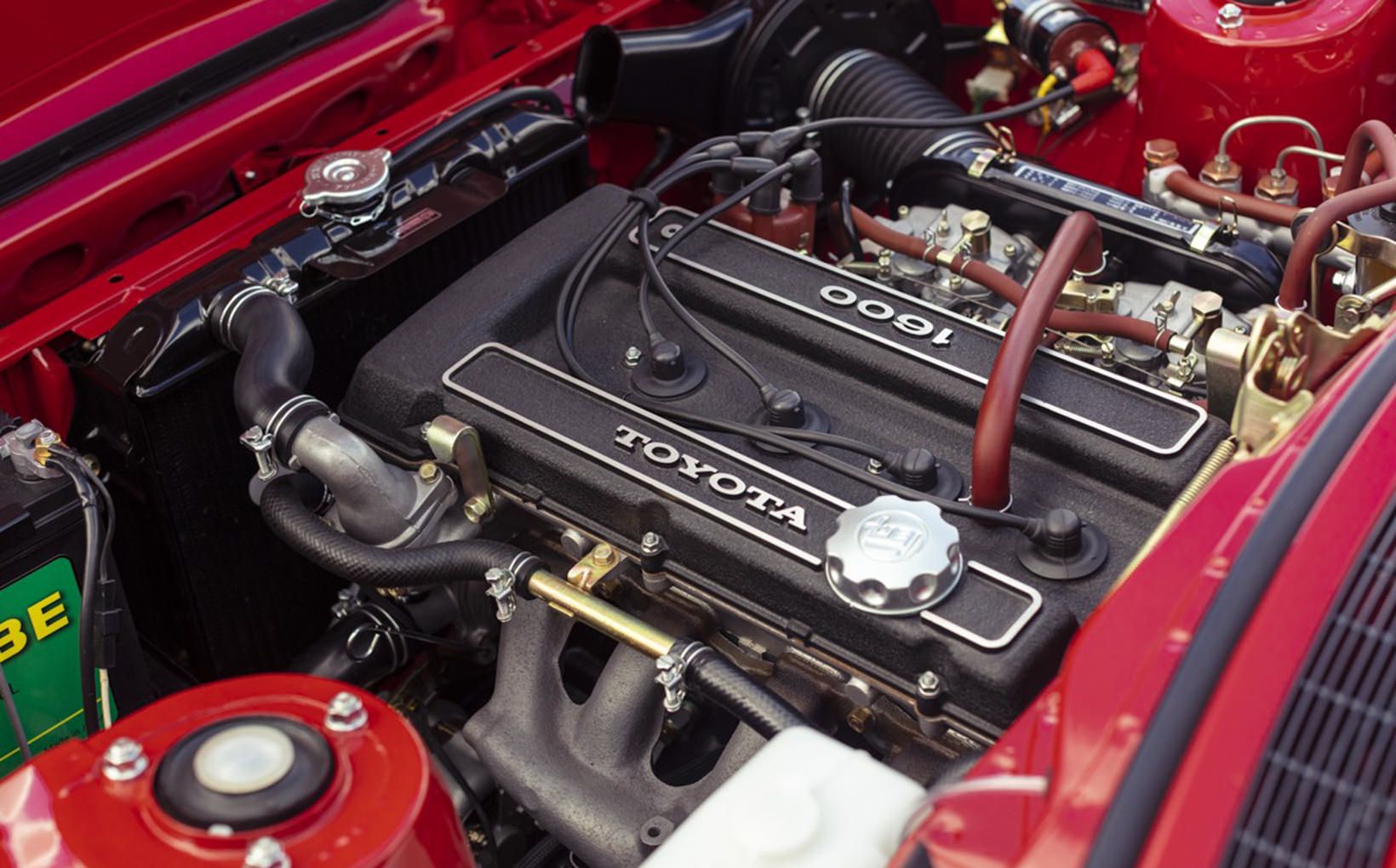 With a five-speed gearbox and limited-slip diff, it was a genuine 120mph (190km/h-plus) oriental grand tourer with an athletic power-to-weight ratio of around 12kg/kW, which wasn’t far north of a Porsche 911 S of the era.

Nick’s Celica GT has a fascinating local history. It was originally brought into Australia by Ken Hougham, who was at the time managing director of Australian Motor Industries (AMI) in Port Melbourne, which among its varied clientele provided local assembly of Toyota cars.

Under Hougham’s inspired leadership, AMI was the first company to assemble and sell Toyotas outside of Japan, starting with the humble Tiara sedan in 1963. By the early 1970s, AMI Toyota was rapidly increasing its share of the Aussie car market, with icons like the Corona, Corolla, Crown - and the new TA22 Celica.

Hougham also had a resolute belief in using motor racing, particularly the annual 500-mile (800km) race at Bathurst, to prove the durability and performance of these Japanese cars. Hougham and his well-drilled AMI pit crew oversaw numerous Bathurst campaigns with Toyotas in the 1960s, including class victories that paid handsome dividends in local marketing campaigns.

Nick’s car attracted rave reviews when new – just as it does today.

Probably with future competition in mind, Hougham shipped this red Celica GT direct from Japan for evaluation as a potential addition to the local line-up. He used it as his personal transport wearing distinctive KRH-555 rego plates, during which time it appeared in Sports Car World and Wheels magazine road test reviews.

“Treat the car in the way which its makers intended (and) you really can go motoring in a big way for a small car,” enthused Rab Cook in his SCW review in September 1972. “The trick is to keep the revs above 5000 and as near as you can to 7000 and believe me, you will hurtle over the horizon like the road-runner with the coyote after it.

“It isn’t all that easy a car to drive if you want maximum performance. I don’t mean that there is anything wrong with the handling – on the contrary, it is predictable, light and vice-free all the way – but you just have to keep the revs up unless you are content with ordinary Celica performance, and this isn’t quite so simple as it sounds.” Cook described the 2T-G as being as peaky as a witch’s hat.

Hougham couldn’t make it stack up as a viable business case, not least due to its potent power-to-weight ratio, which combined with the letters ‘GT’ would have attracted punitive insurance premiums. 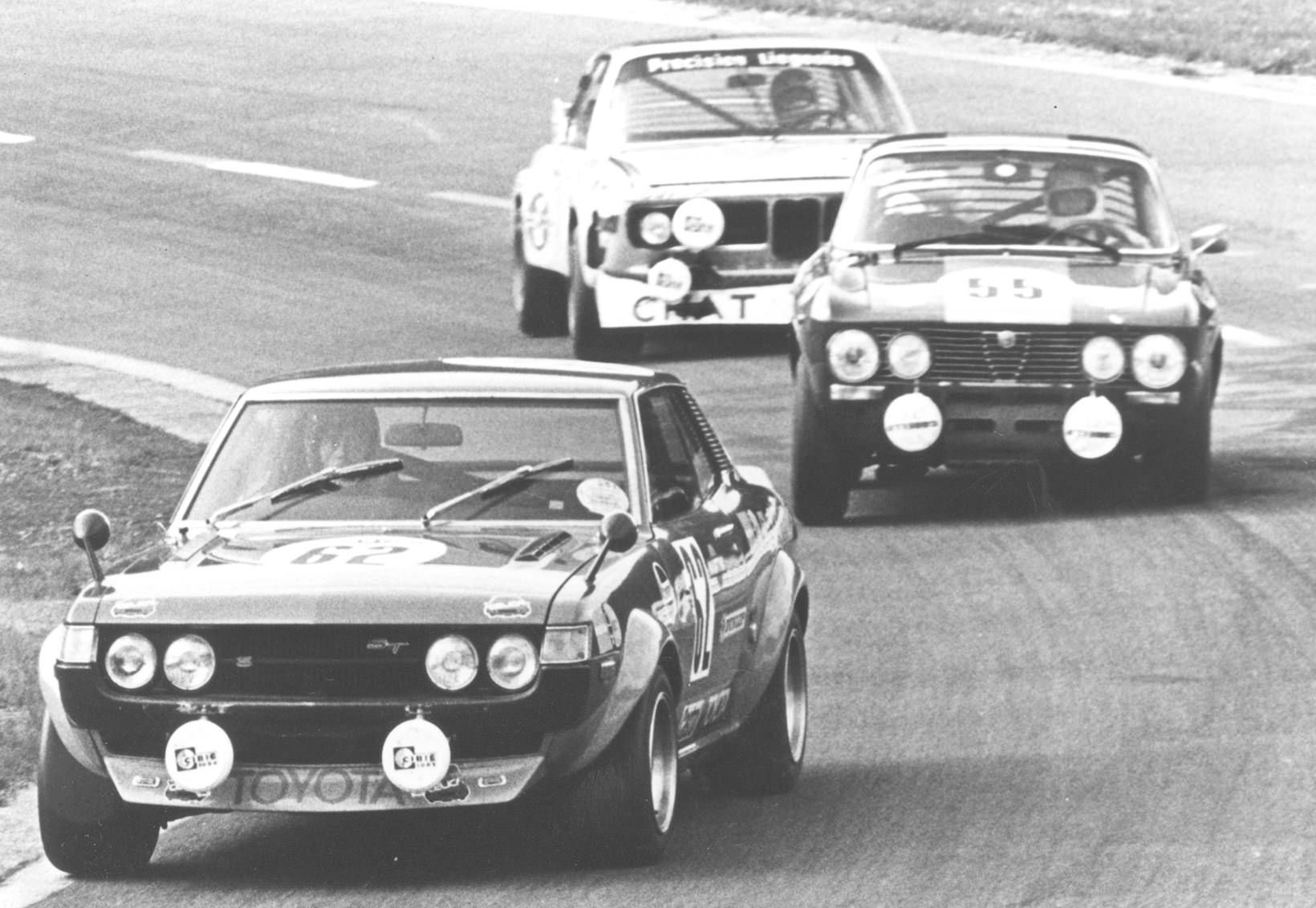 Other Japanese market features like blue-tinted window glass, forward-mounted driving mirrors etc made it ineligible for an Australian compliance plate so it was placed in storage, later joined by a 1973 RA25 Celica GT and TE27 Corolla Levin which were also shipped from Japan for evaluation. This non-compliant trio was destined for the crusher.

Fortunately, these cars instead remained in storage for about ten years before being dusted off and quietly transported to NSW, where they were registered by a Toyota dealer and sold. The RA25 GT and TE27 Levin have both survived (see reader comments at the end of this story) but the identity of Nick's red GT’s first owner is unknown. It eventually found its way back to Victoria where it was purchased by a Tasmanian enthusiast, who in turn shipped it across Bass Strait to its new home in Hobart.

It was well cared for during decades of Apple Isle ownership. This concluded when Nick, during a holiday in Hobart, came across the car by luck. He was aware of the existence of Hougham's car, but never thought he would find it and was not 100 per cent sure he actually had found it at the time. Regardless, he convinced its wary owner that if he was to become the Celica’s new custodian, he would return the ageing and unrestored GT to original showroom glory. 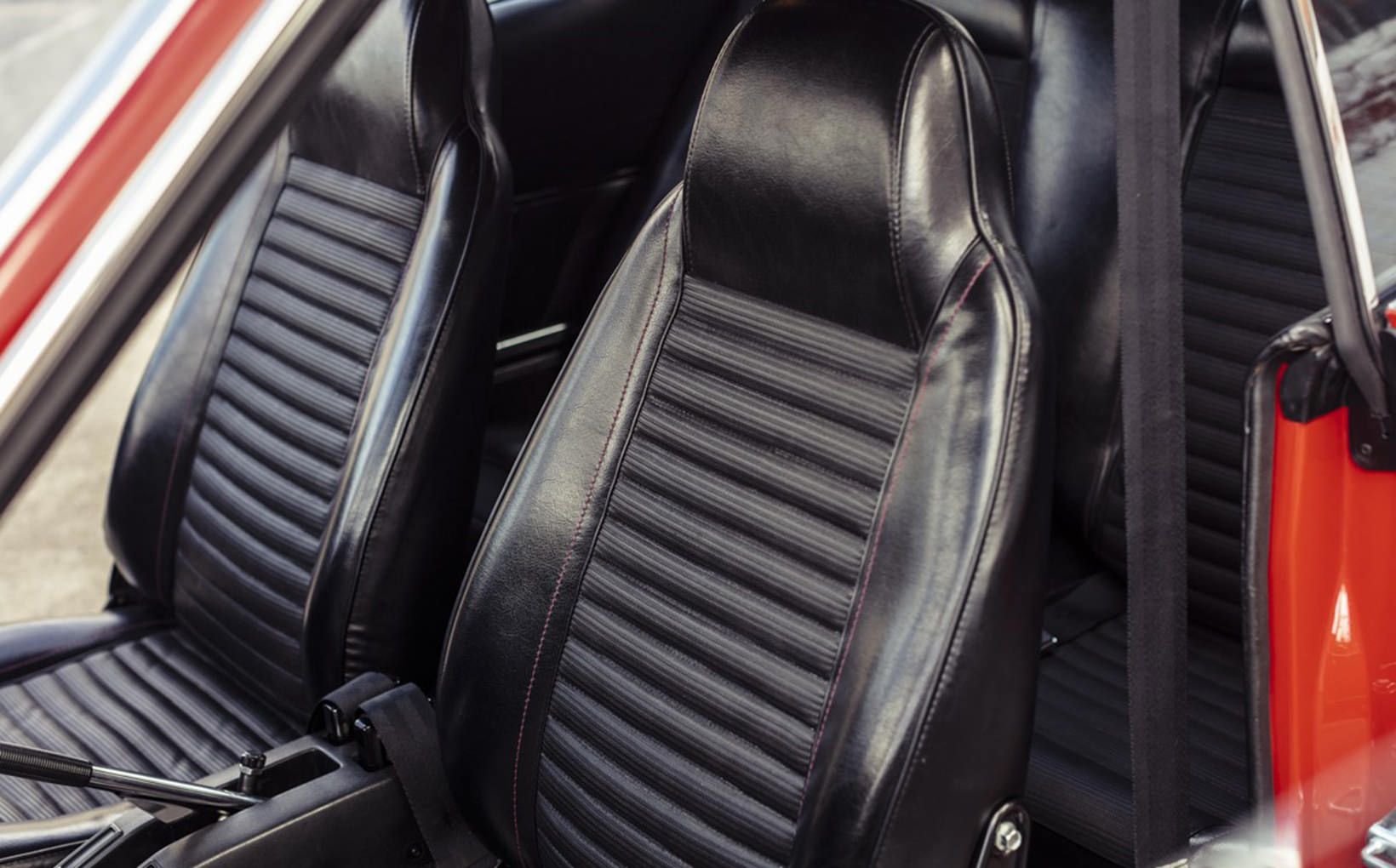 The former owner stayed in contact with Nick during the car’s multi-year restoration, assisting with information and supply of parts to help ensure the success of the project. The Hobart resident also joined Nick at Motorclassica 2019 for the car’s public debut and they remain good friends. Amazingly, members of Ken Hougham's family also attended Motorclassica, resulting in connections to the GT spanning almost 50 years.

“It was actually in really good condition when I got it,” Nick says. “The interior is still all original, it just needed a thorough clean. Elsewhere the car was tired because it was almost 50 years old and was used pretty much as a daily driver for most of its life, so it just needed someone to sit down for four years and go through it with a fine-tooth comb.

“Whenever I fix things, I always want to do it right (this is Nick’s first automotive resto) and with this sort of car you only really get one chance to keep it authentic. Anyone can modify a car, but to preserve its originality in terms of bringing it back to exactly what it was when new, that’s much harder.” 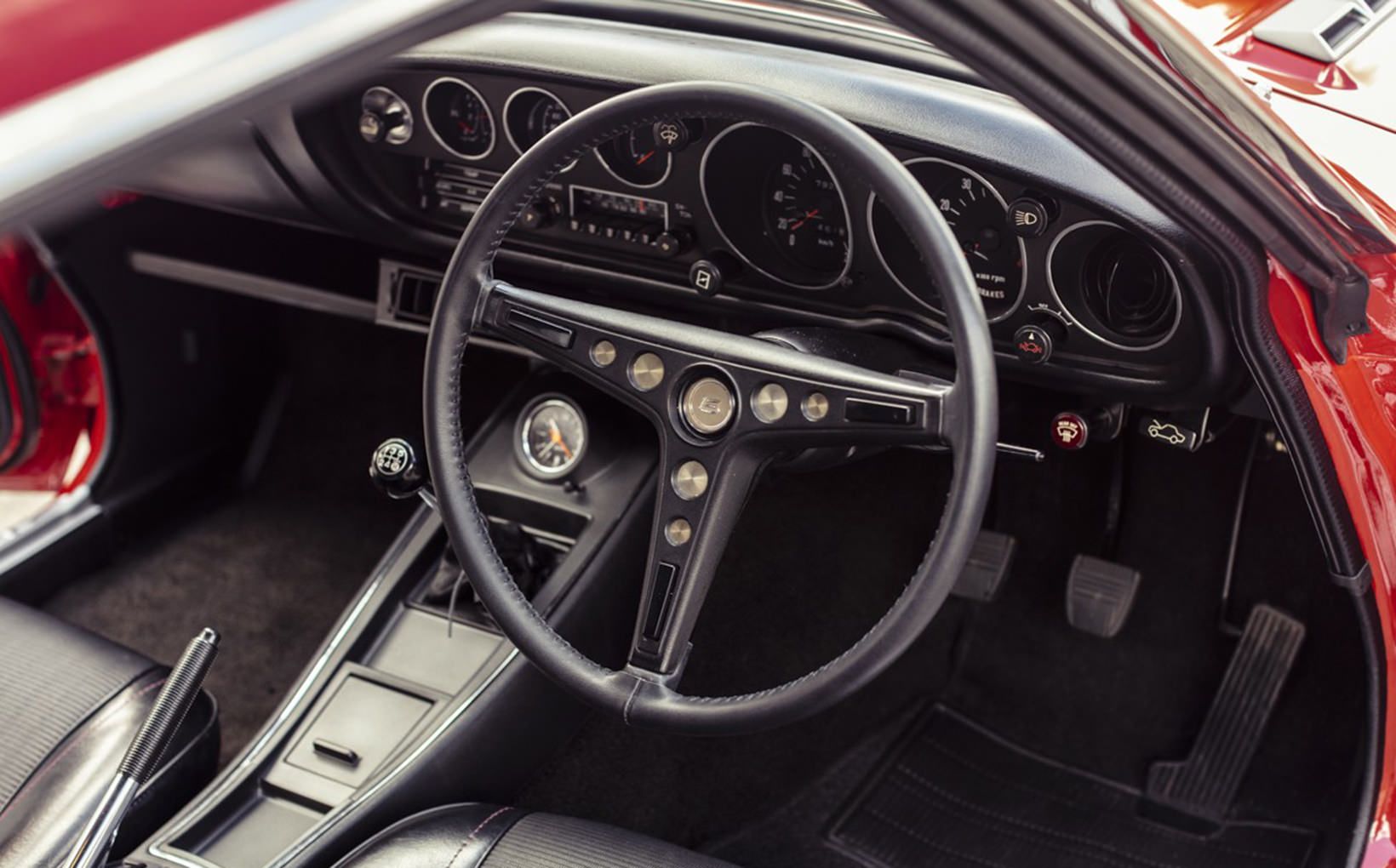 You could be excused for thinking such a jaw-dropping restoration would have restricted this Celica to pure show car status upon completion, rarely driven and towed in a cotton wool-lined trailer. However, that couldn’t be further from the truth, as Nick thoroughly enjoys the retro driving experience:

“With the tyres (165SR13s) and suspension now being how it was originally, the car drives beautifully. I’m actually surprised how good it is. I’ve driven other cars of this age and normally you feel some bumps and thumps, but with this car there’s nothing. It feels brand new.

“At higher revs you can really feel that change in response and acceleration with the twin-cam and I can easily overtake other cars on the freeway. It’s probably not as fast as some new cars from 0-100km/h but it’s very light (about 1000kg) with a power-to-weight ratio that makes it a lot of fun to drive. 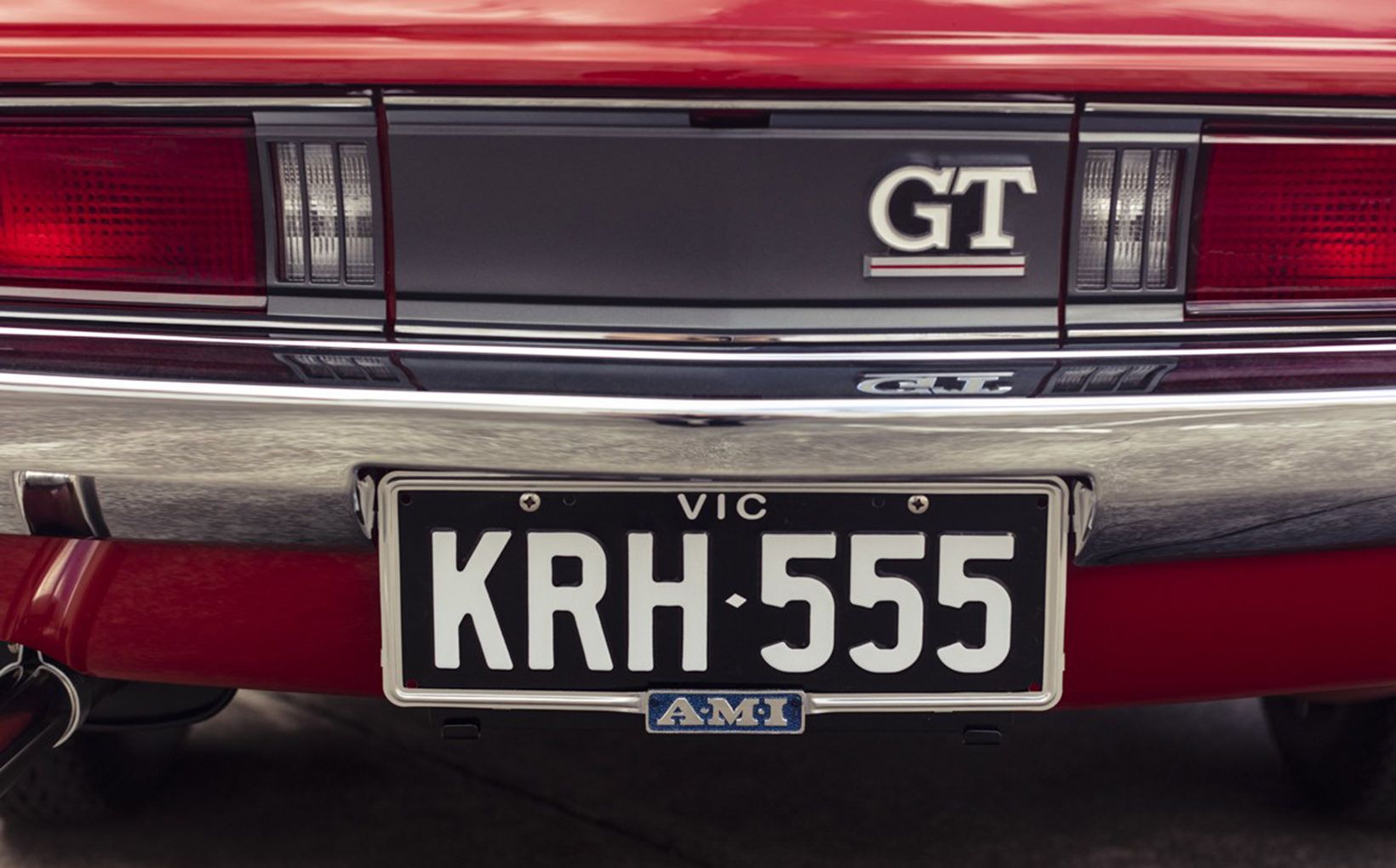 Nick uses replica KRH-555 plates for display purposes. He says the originals are still out there, somewhere...

“In addition to the original vinyl interior, it also has original carpets and horse-hair underfelt. It’s all of those scents of that time that are different to today’s cars because of the different materials used and they contribute to the 1970s driving experience.

“I love the creature comforts too. It came standard with an AM/FM radio and eight-track player so I have a collection of eight-track cartridges. I might switch on Fleetwood Mac or Blood, Sweat and Tears or Led Zeppelin and play them through the 50-year-old speakers, which with the analogue tape have a unique sound that’s also very different to a new car with digital sound.” 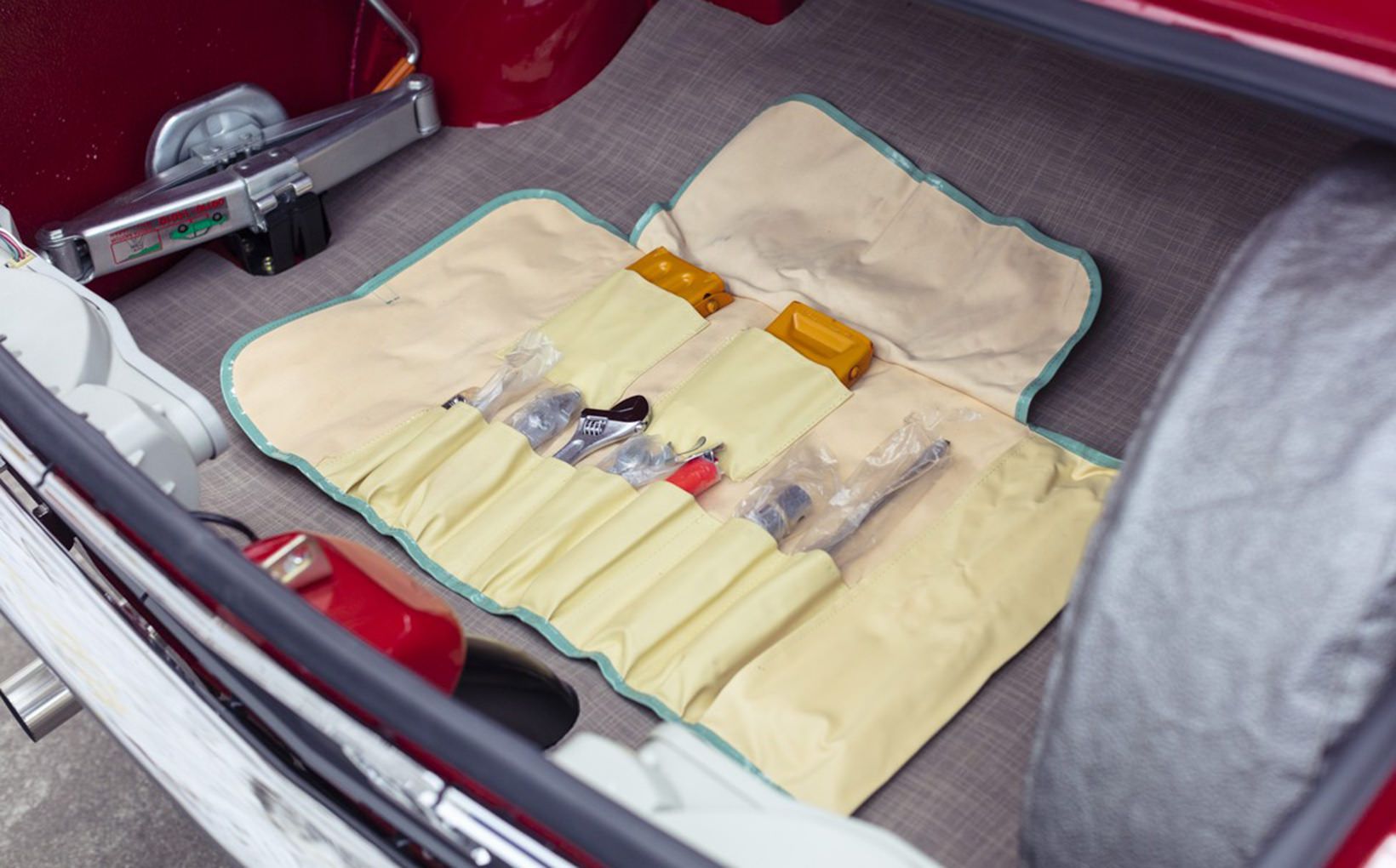 Factory-correct, right down to the boot linings, jack and tool kit.

Nick, who is a member of the Shannons Club-registered Toyota Car Club of Australia Victoria has no plans to sell his award-winning Japanese GT, as he is understandably very attached to it. Many people share a similar attraction.

“It’s one of those cars where I’ve had to accept that when I go to a petrol station or stop somewhere, I have to allow at least an extra five to ten minutes for questions,” he quips. “If I’m in a rush, then I just don’t take this car, because it’s guaranteed that someone will stop and ask me about it.”

Which is no surprise to us, given that it’s one of the finest – if not the finest – examples of a showroom-correct 1971 TA22 Celica GT you’ll find anywhere in the world.